Thamarong Wanarithikul leaves his house at eight in the morning to take the Bangkok Skytrain to work. One day, while crossing a pedestrian bridge, he saw a group of men sleeping in the back of a truck that passed right below him. He took a picture with his phone and continued on his way.

That was the first image of 8 a.m., a series of more than 3000 photographs of people commuting to work on the backs of pickup trucks taken from the same pedestrian bridge. Wanarithikul would stick his head out and point his camera downwards, capturing his subjects from above. The striking result is a cross between candid photography and social documentary, exposing the harsh lives of Bangkok’s workers. 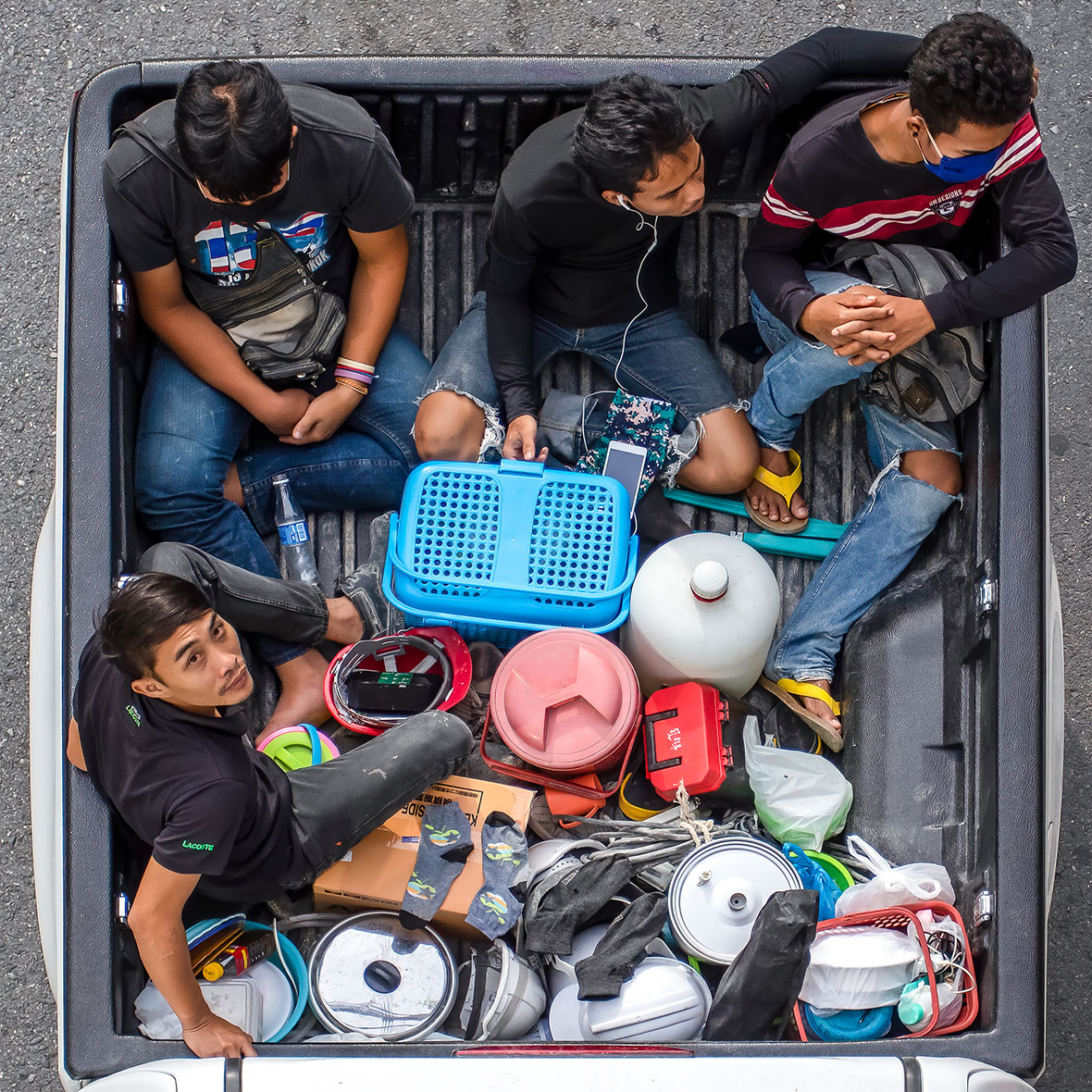 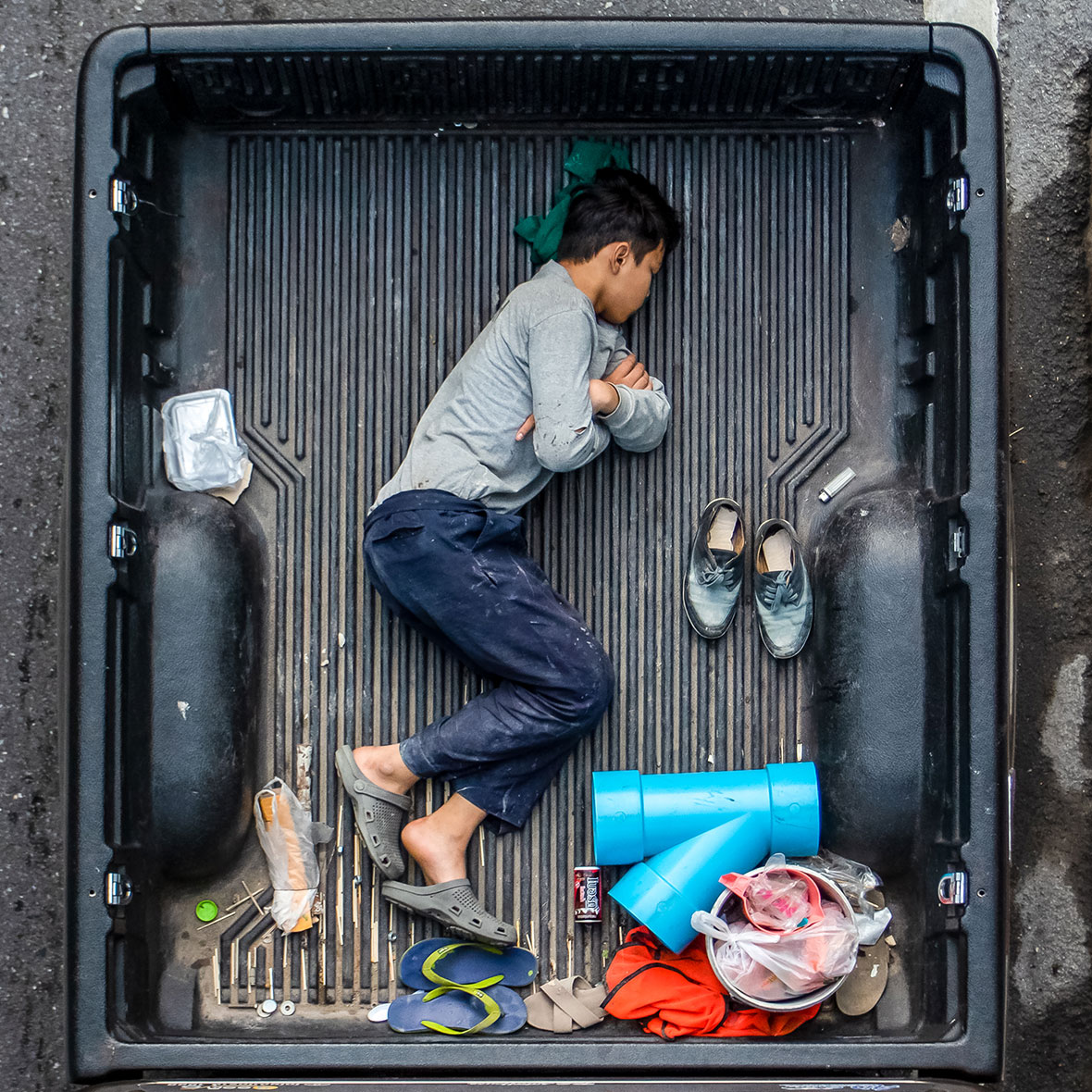 In his photos, only a few of the pickup trucks have protective bars or improvised benches. Usually workers sit on the floor, crowded against each other and trying to sleep. When there’s room, they stretch out on the floor, and when there’s not, they get unavoidably entangled in each other’s arms and legs. They often also share space with all kinds of tools—the clearest indication of who they are.

“Based on these clues, I can only assume, but many of them seem to work in construction, as you can see from the helmets and toolboxes,” Wanarithikul says. “You also see things that could relate to plumbing, catering services, delivery services, or similar things.” 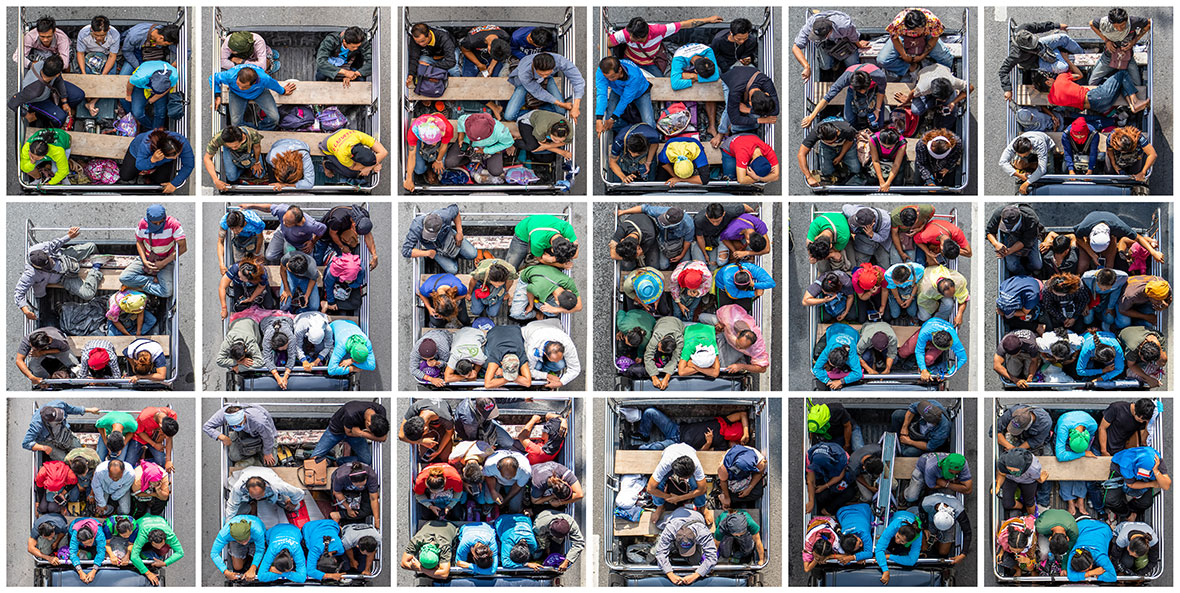 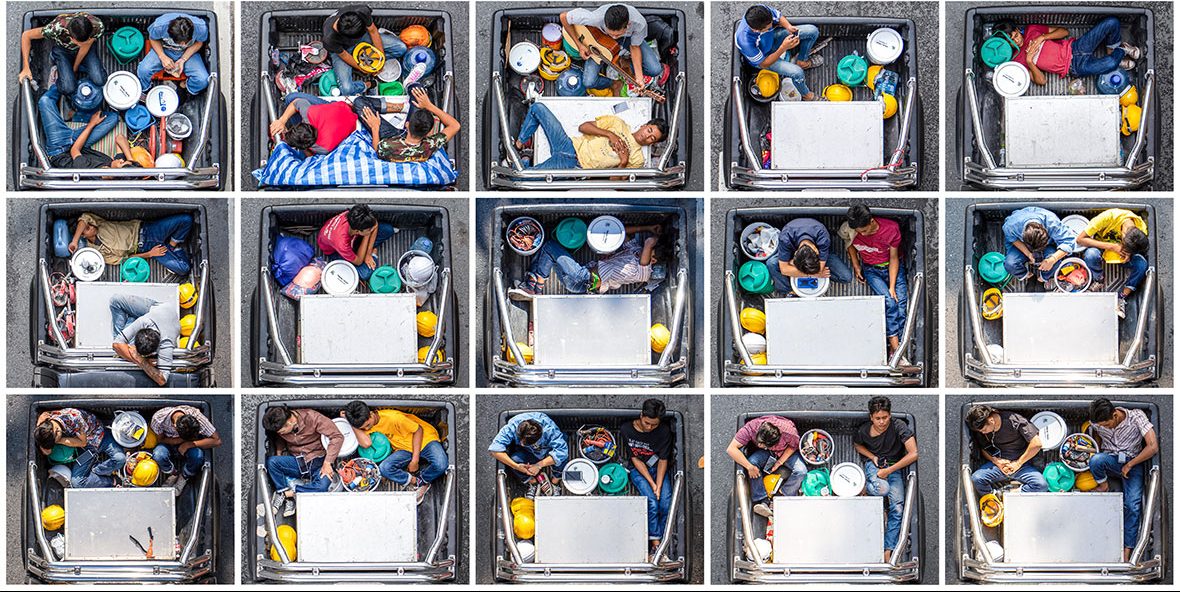 He believes that many of them are Burmese migrants who have crossed the border to work in Thailand. Most likely they hold residency permits, because the government is making efforts to formalize their status. But the trucks belong to the companies they work for, and it’s illegal for them to commute this way. “The government turns a blind eye, but if there’s an accident, these people will fly out of the trucks.”

With the high costs of living in central Bangkok, these workers probably travel from outside the city, from places with no access to public transportation. This is a sobering thought: it means they’ve already had a long journey from their homes. 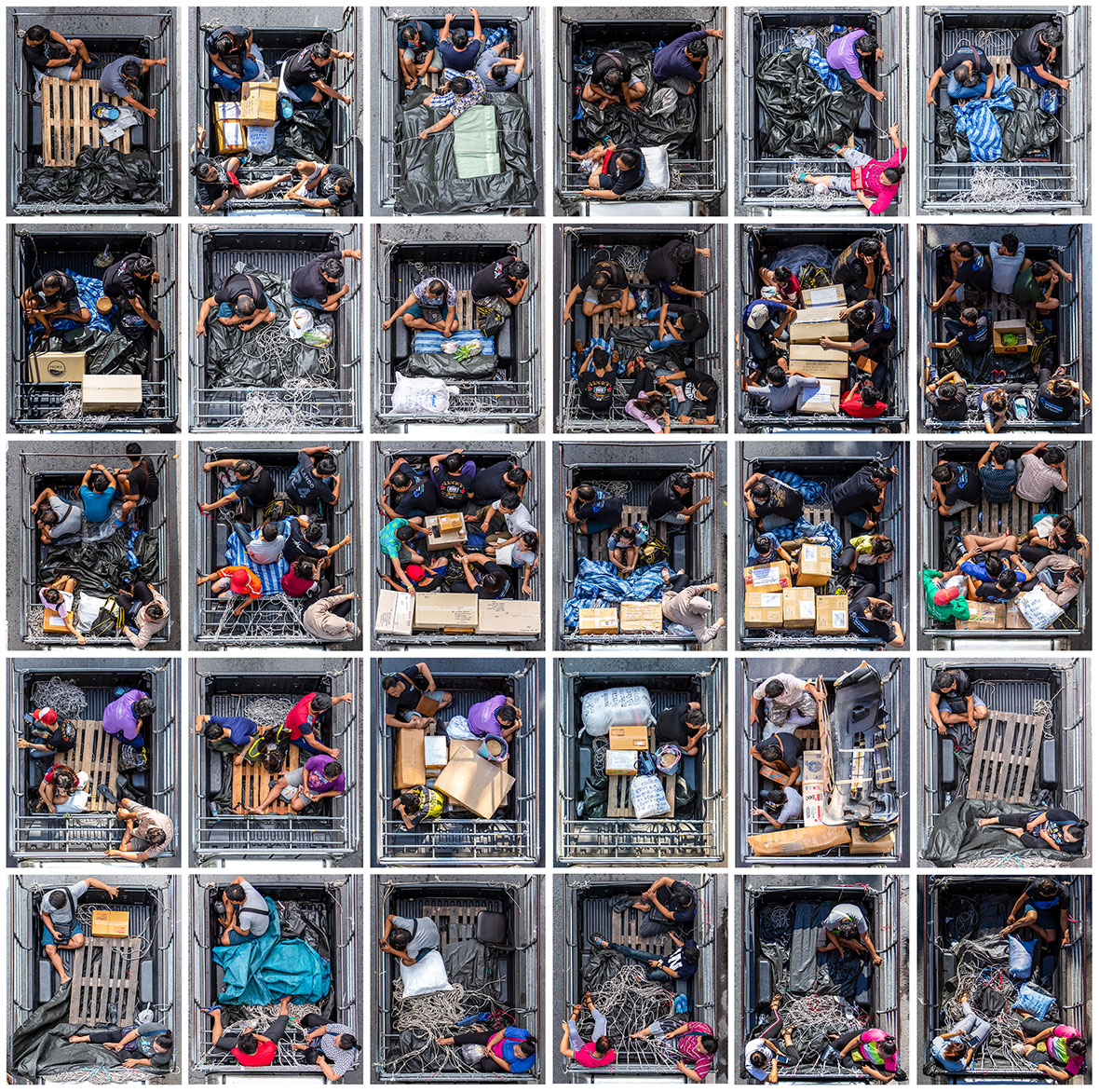 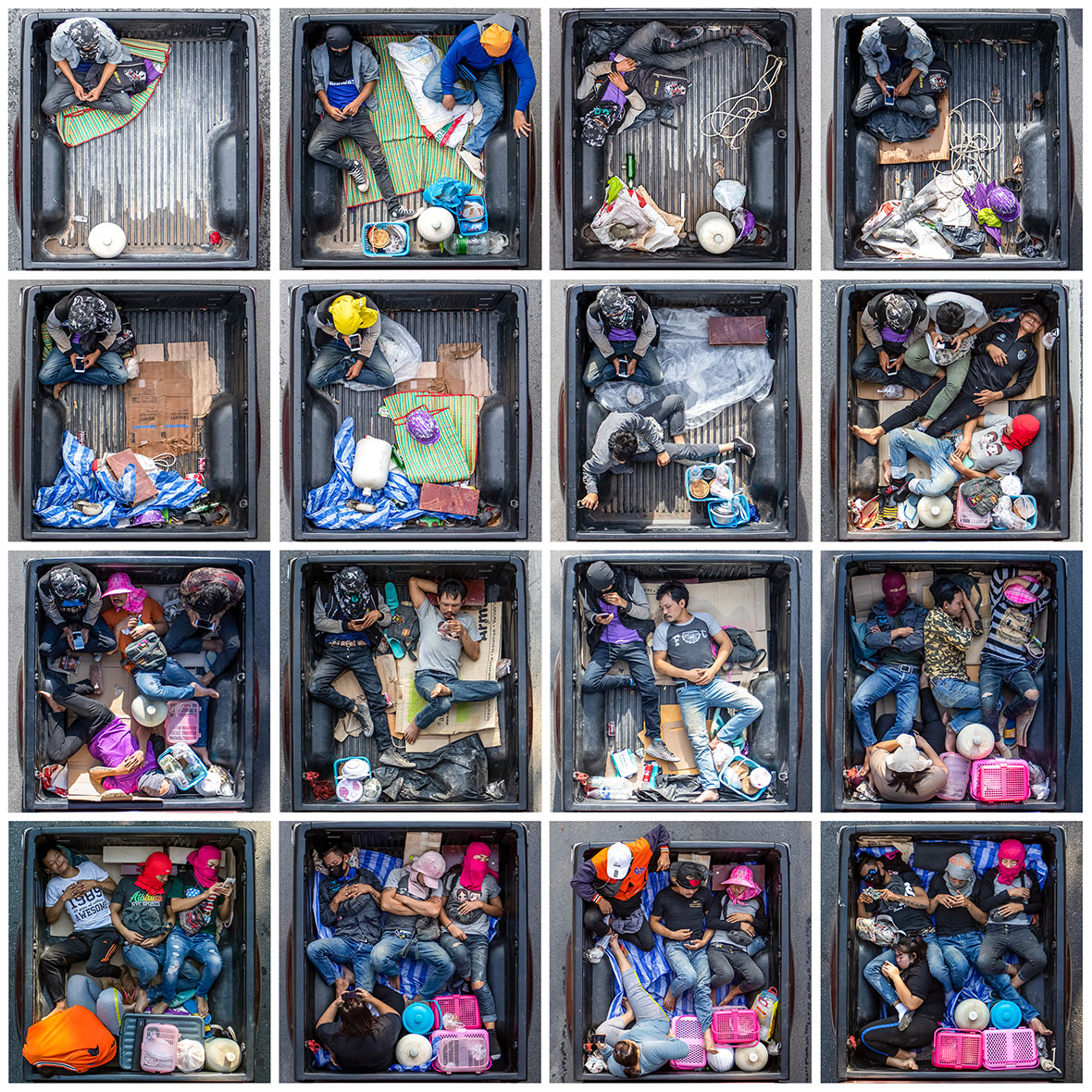 After going back to that same bridge repeatedly over the course of a few months, Wanarithikul began approaching local galleries with his photos. For a long time, he received no answer, until one day, he heard from Manit Sriwanichpoom, a well known local photographer and the owner of the prestigious Kathmandu Photo Gallery.

“Manit noticed that some of my photos were of the same truck, and with the same people. I had realized that before, but it was never my selling point. It was he who told me to tell the story of these people, day after day,” he says.

With a new focus, Wanarithikul began to stand on the bridge for more than 45 minutes every day on his way to work. Because traffic is particularly bad at this hour, he could work on his framing and make interesting observations. 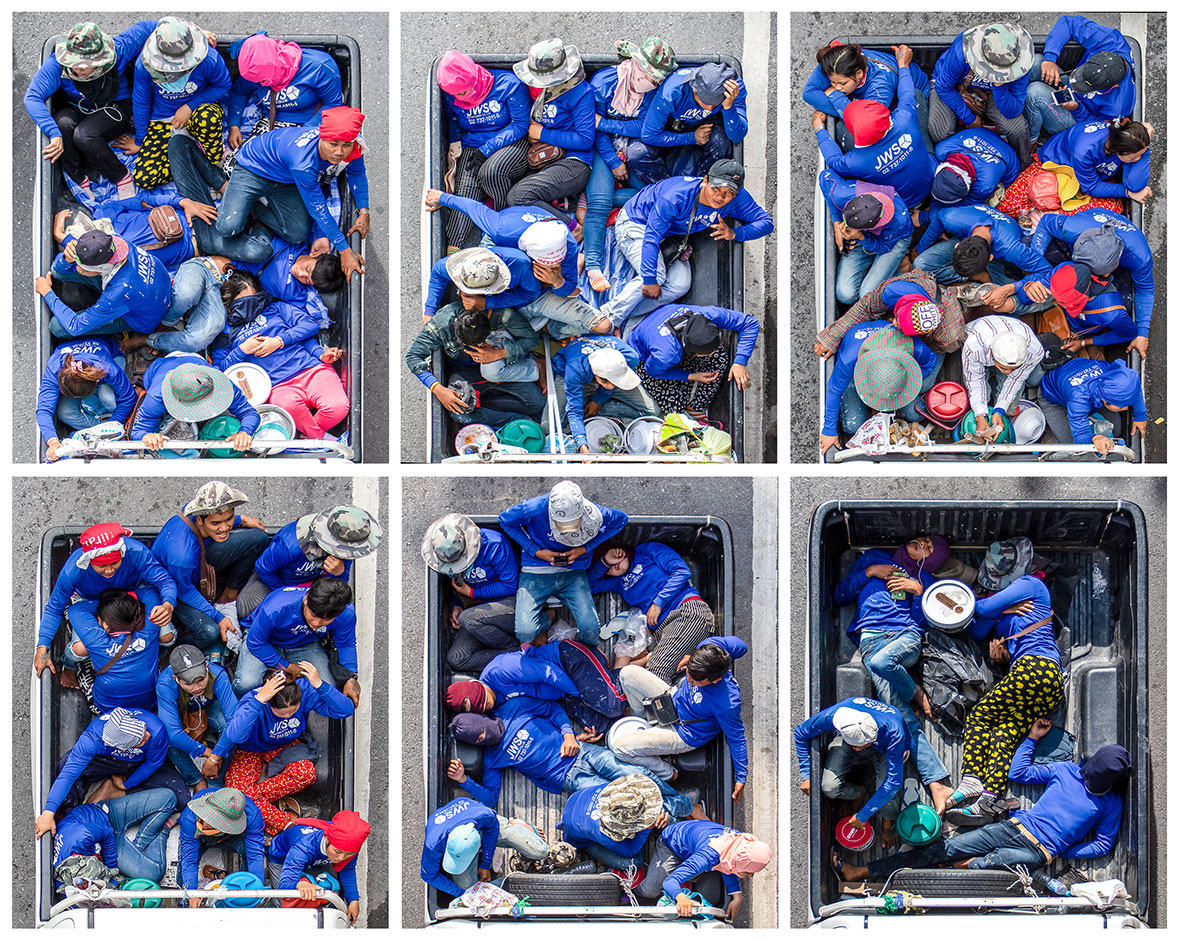 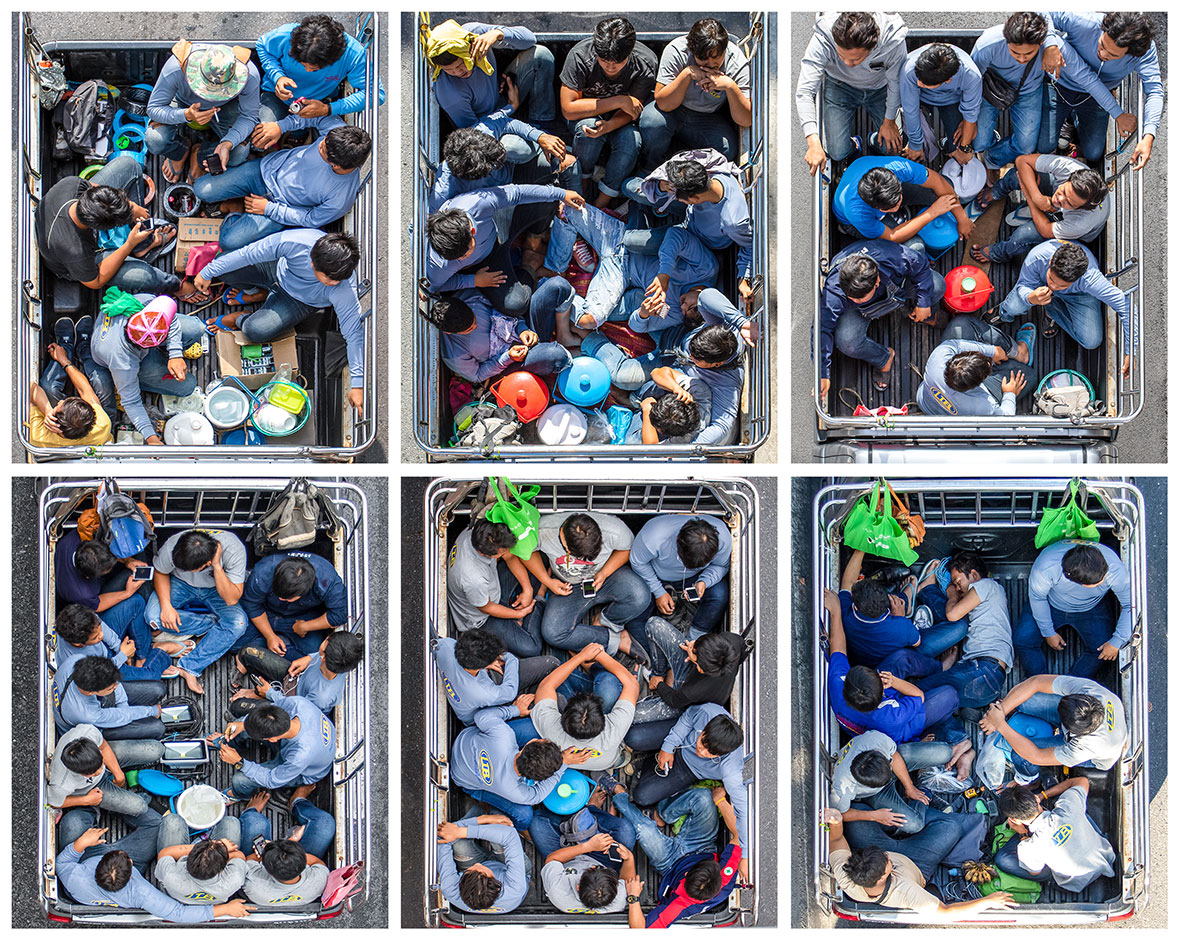 “I couldn’t be late—trucks come more or less at specific times. One comes at eight o’clock, another at eight-fifteen, then eight-twenty, and so on,” he says.”But I would see some trucks three or four times, and then they would never come again. It’s incredibly difficult to take a large number of pictures of the same truck.”

Wanarithkul kept track of the different trucks by their bodywork, markings, and other vehicle details. He divided the series into 15 collections and arranged the images in chronological order. 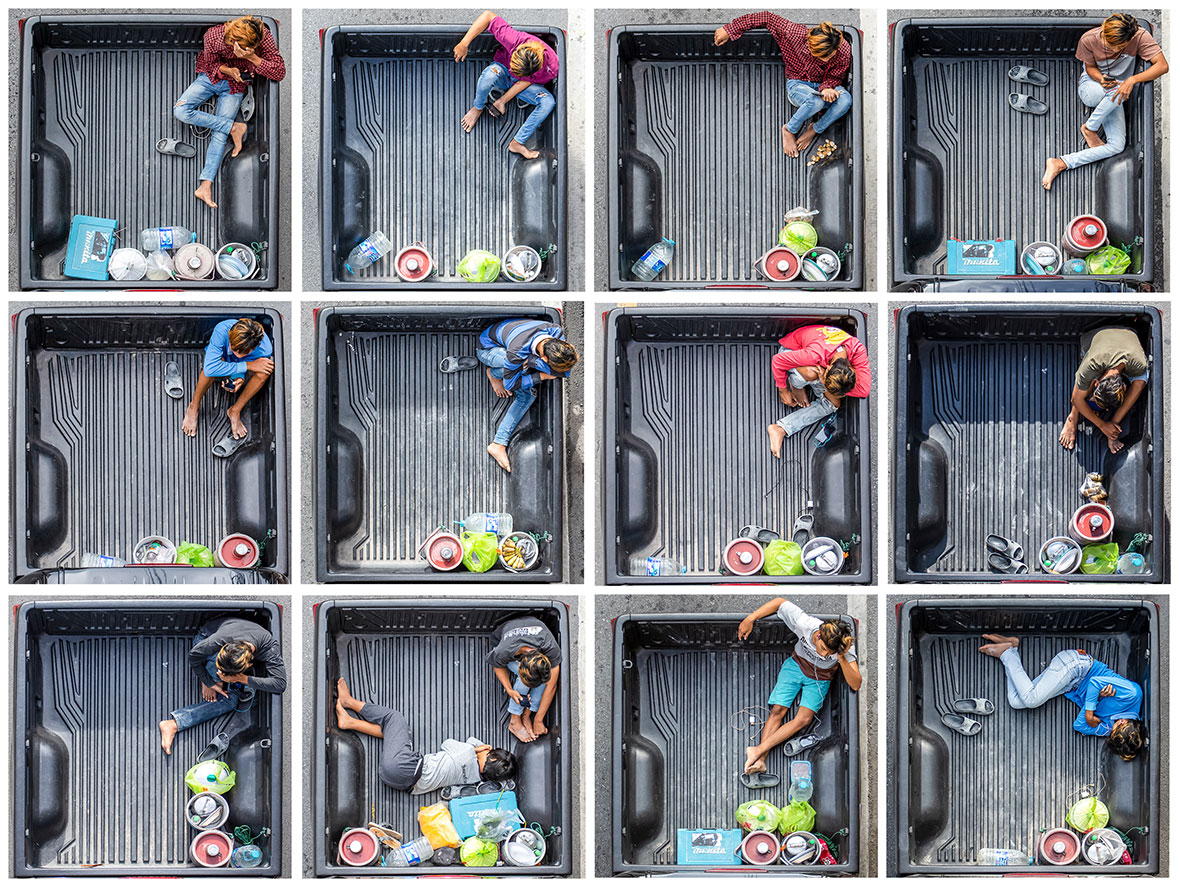 In one collection of 12 pictures, a young man always sits at the same corner of the truck. At first, his hair is entirely dyed. But as the pictures progress, the color moves through his hair. In the last shot, in which he’s resting his head on the wheel case, only a few hair strands are still dyed. It took Wanarithikul over two months to complete this collection.

Another photoset starts with a boy sleeping in a semi-fetal position. He appears in many of the images alone, but later, two other older men join him, and then, suddenly, he disappears. “This boy is not going to school, he’s going to work,” Wanarithikul says. “He is sleeping under the sun on the back of a truck, and you can tell he has a difficult life.” 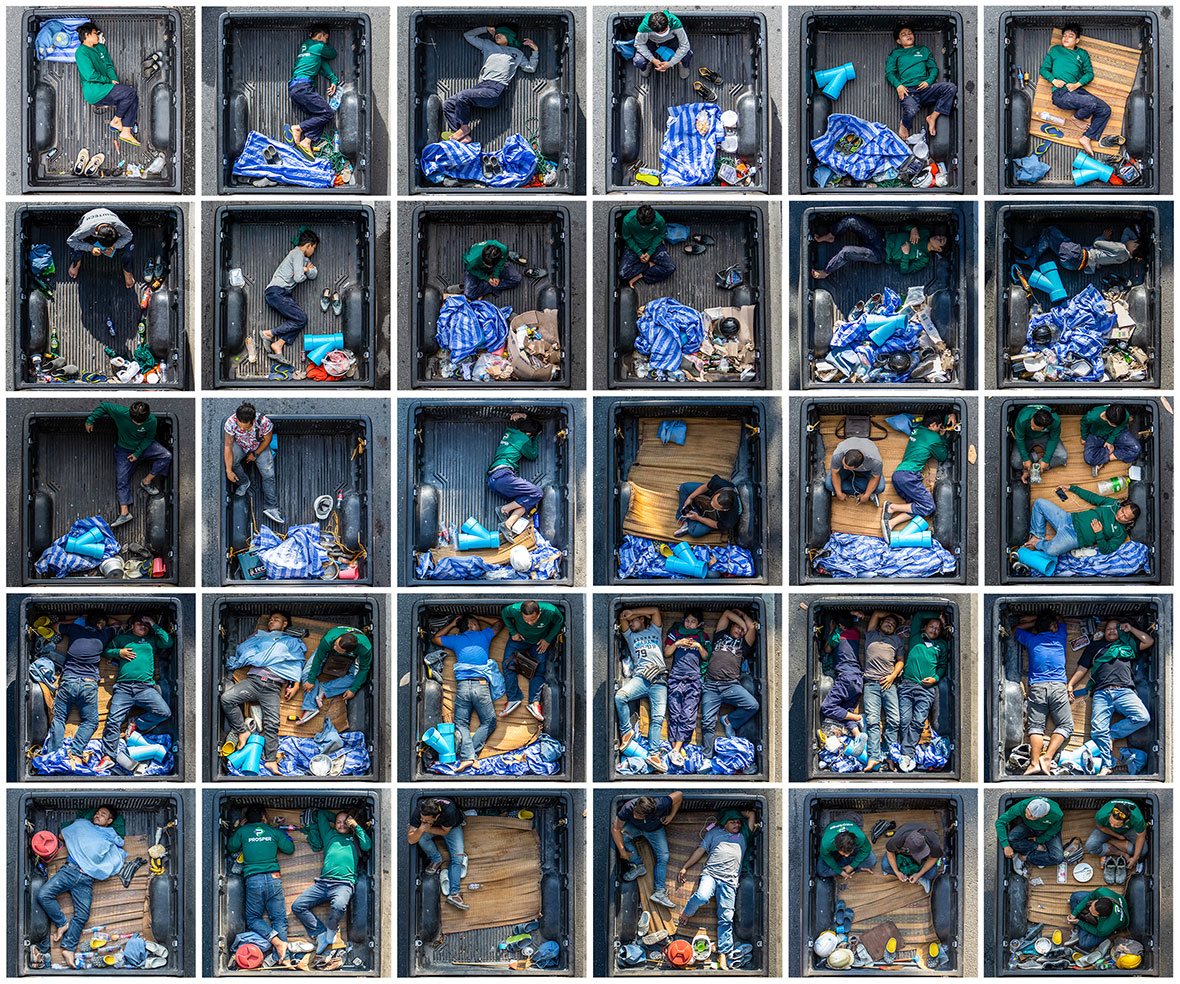 They tend to sit in the same places every day. They try to sleep or use their phones to pass the time. Most protect their faces from the scalding sun with a piece of cloth, and they all rest uncomfortably on the uneven pickup truck bed. They look drawn and tired—but their day has only just begun. 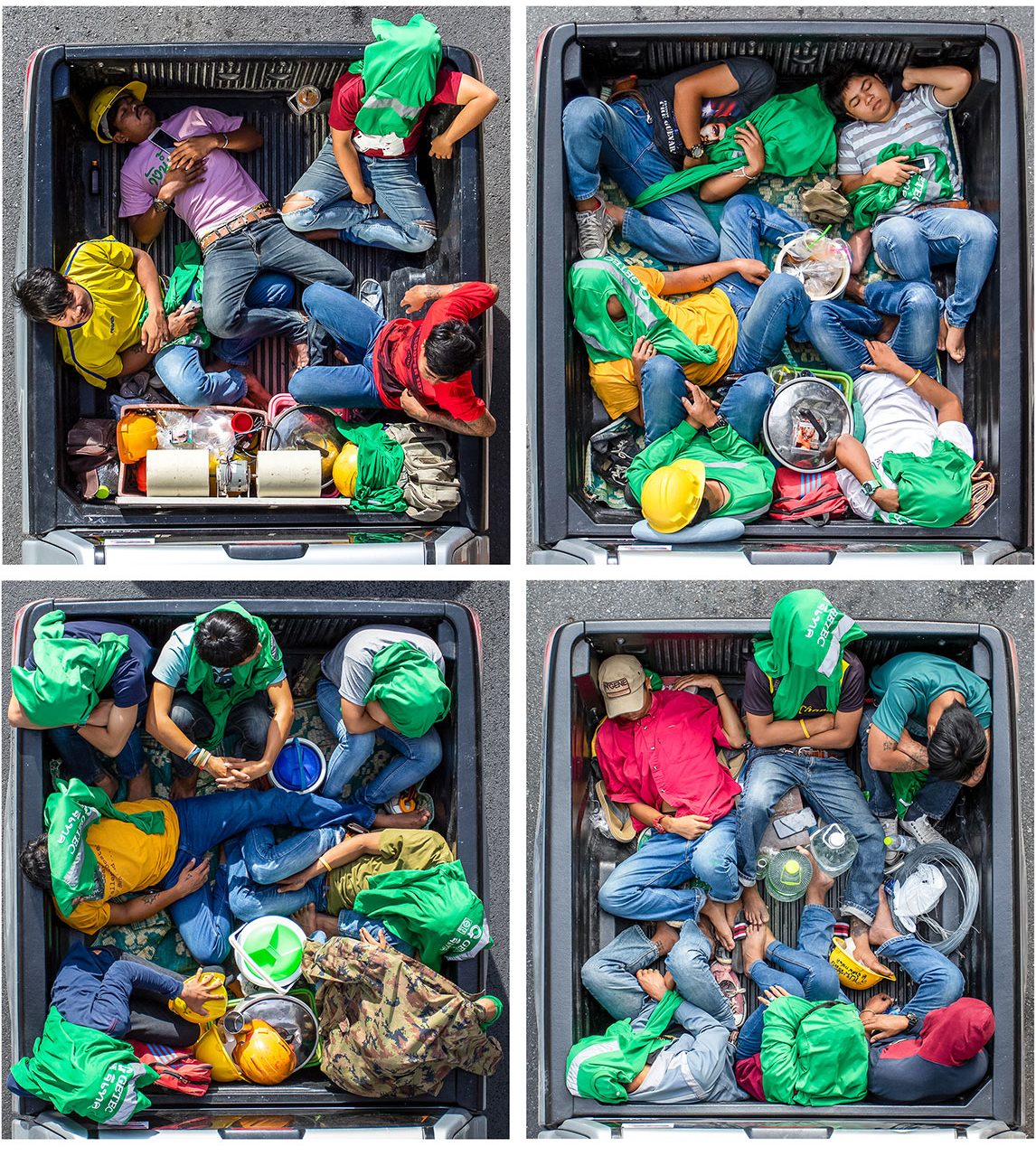 “8 a.m. says a lot about Bangkok. I take the Skytrain to go to work. It has air conditioning, and it’s fast. But these workers wake up much earlier to sit under the sun for a very long time. We see this every day, and we ignore it,” Wanarithikul says. His series is a stunning visual reminder to anyone oblivious to the abiding inequity of life.

Wanarithikul’s first and only show, held at Kathmandu Gallery in early 2019, opened to wide acclaim. What started as a single snapshot evolved into a study of social conditions and an empathizing portrait of people caught between worlds. 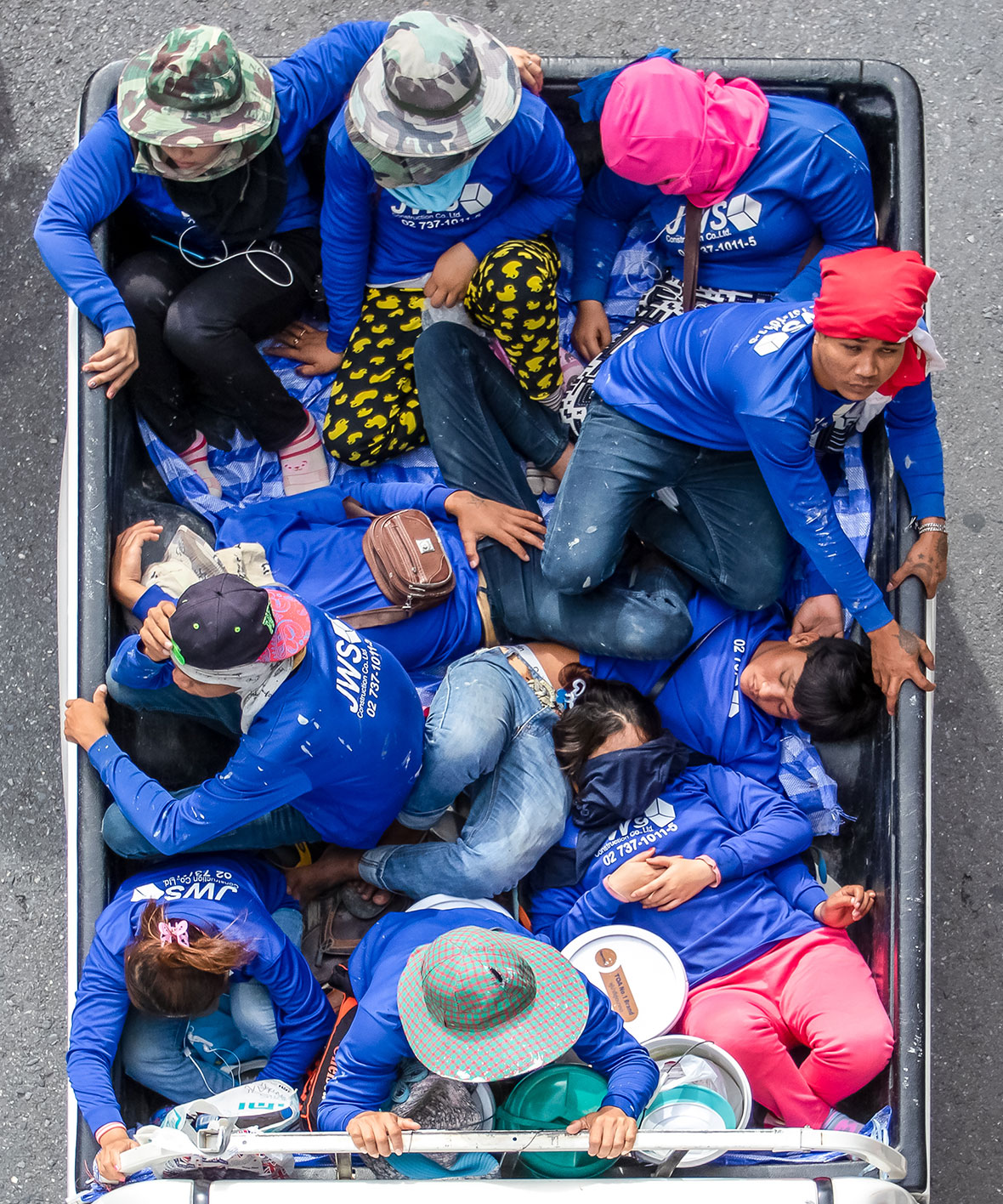 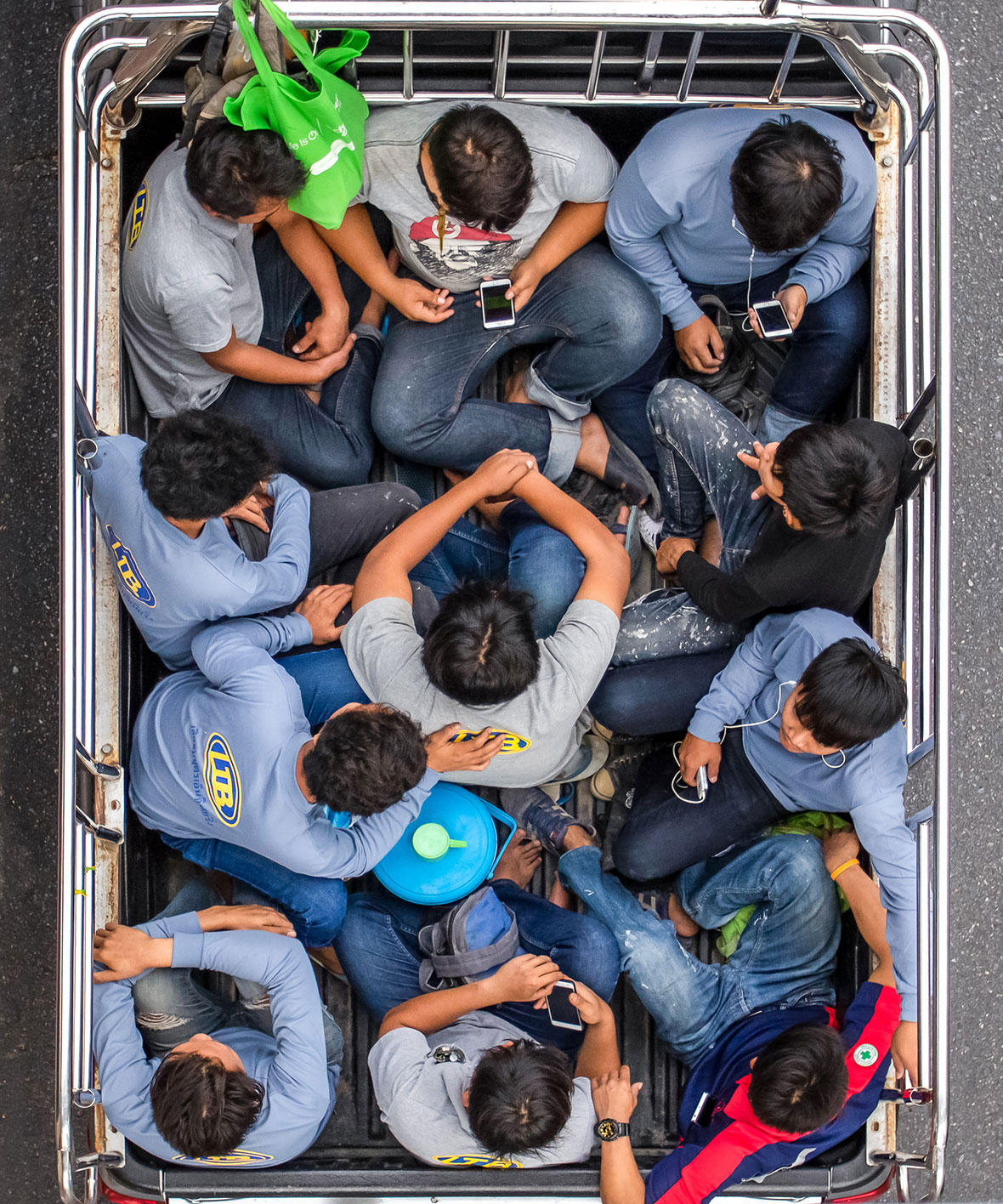