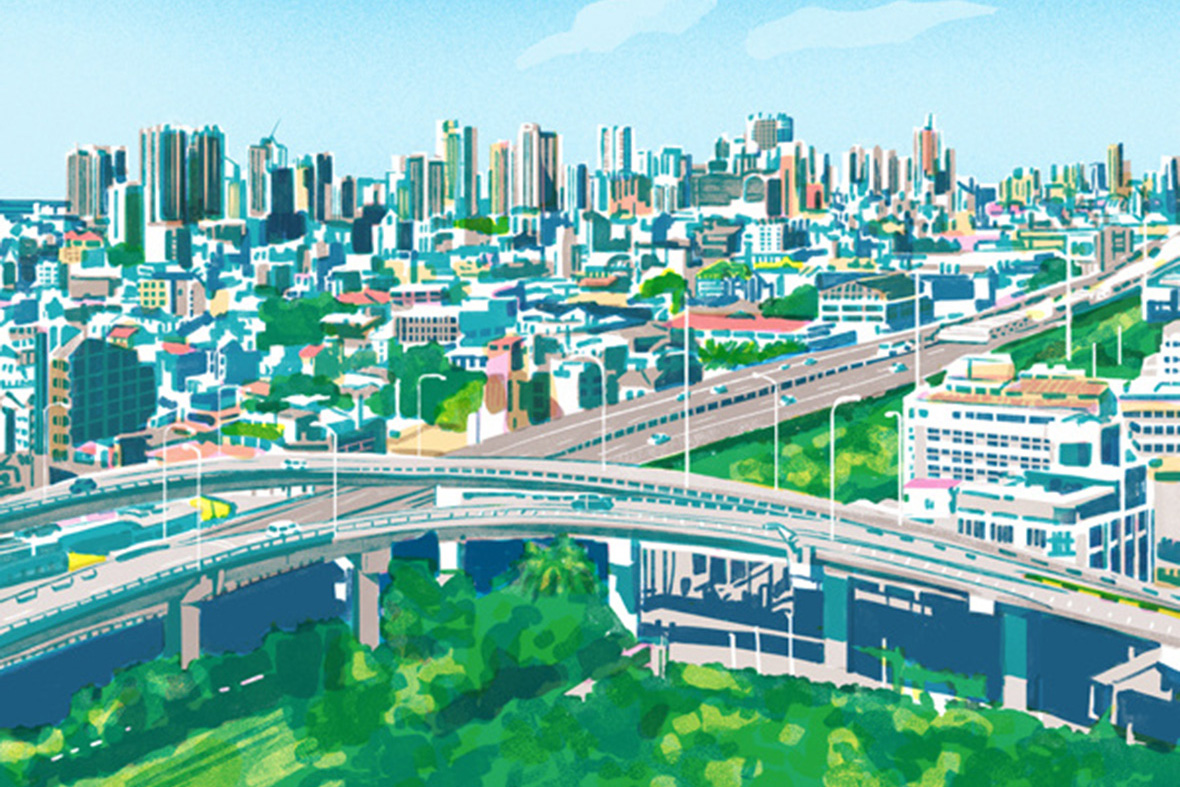 While Ukiyo-e served as the creative bedrock, the Filipino artist was also influenced by Shin-hanga, an art movement that fused Japanese woodblock prints and paintings with Western elements. His digital works are equally inspired by the strokes of John Singer Sargent, Edgar Degas, and Nicolas Uribe, which he reinterprets through watercolor and gouache. “Being inspired by these different styles, I desired to create art that features Manila and Saigon, as there was not anyone that I knew locally who had done such a series of 100,” he explains. 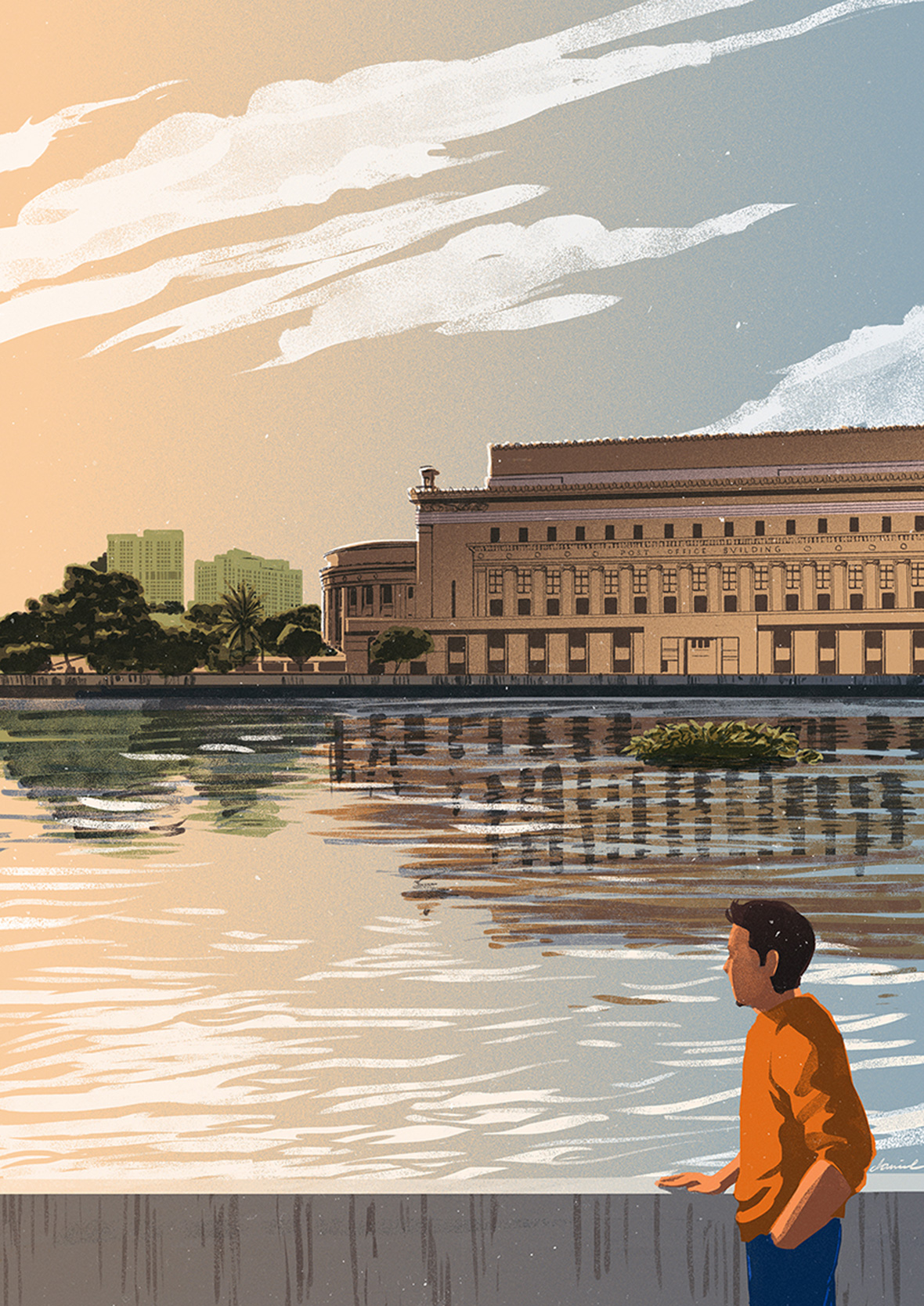 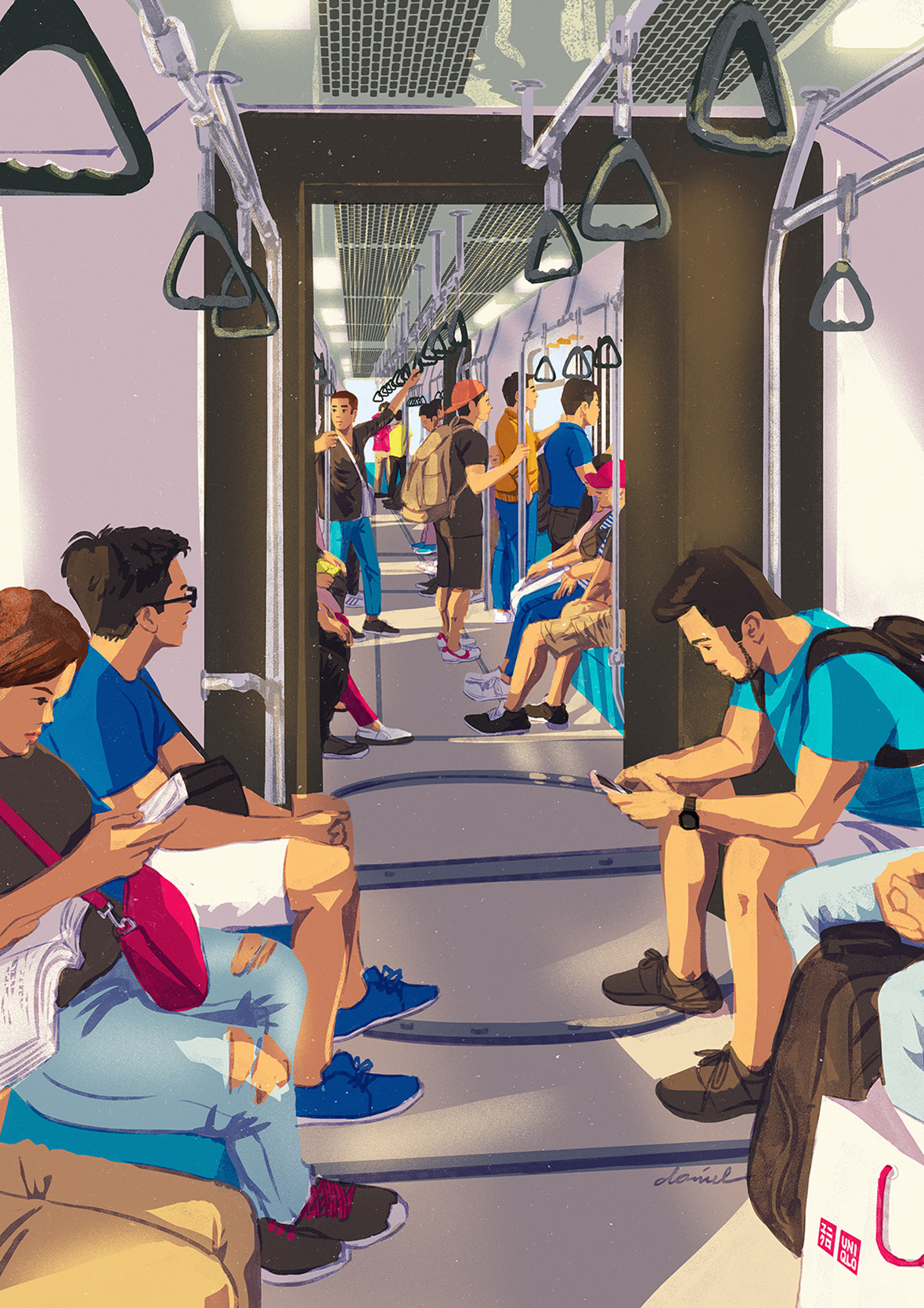 Tingcungco, who was born in Baguio City and moved to Manila in 1994, often compared Manila with cities abroad—these comparisons usually left him feeling frustrated at how much his home lagged behind. Yet, Tingcungco admired the local way of life. Despite the weather, governance, and environment, Manila and its communities still thrived in their own way. “Through my illustrations, I was able to see Manila with fresh eyes and discover places and elements that I have never encountered before,” he says. “It changed the way I view the city, accepting it for what it is, but also hopeful of what it can be. Through every artwork I create, the beauty of it unravels.” 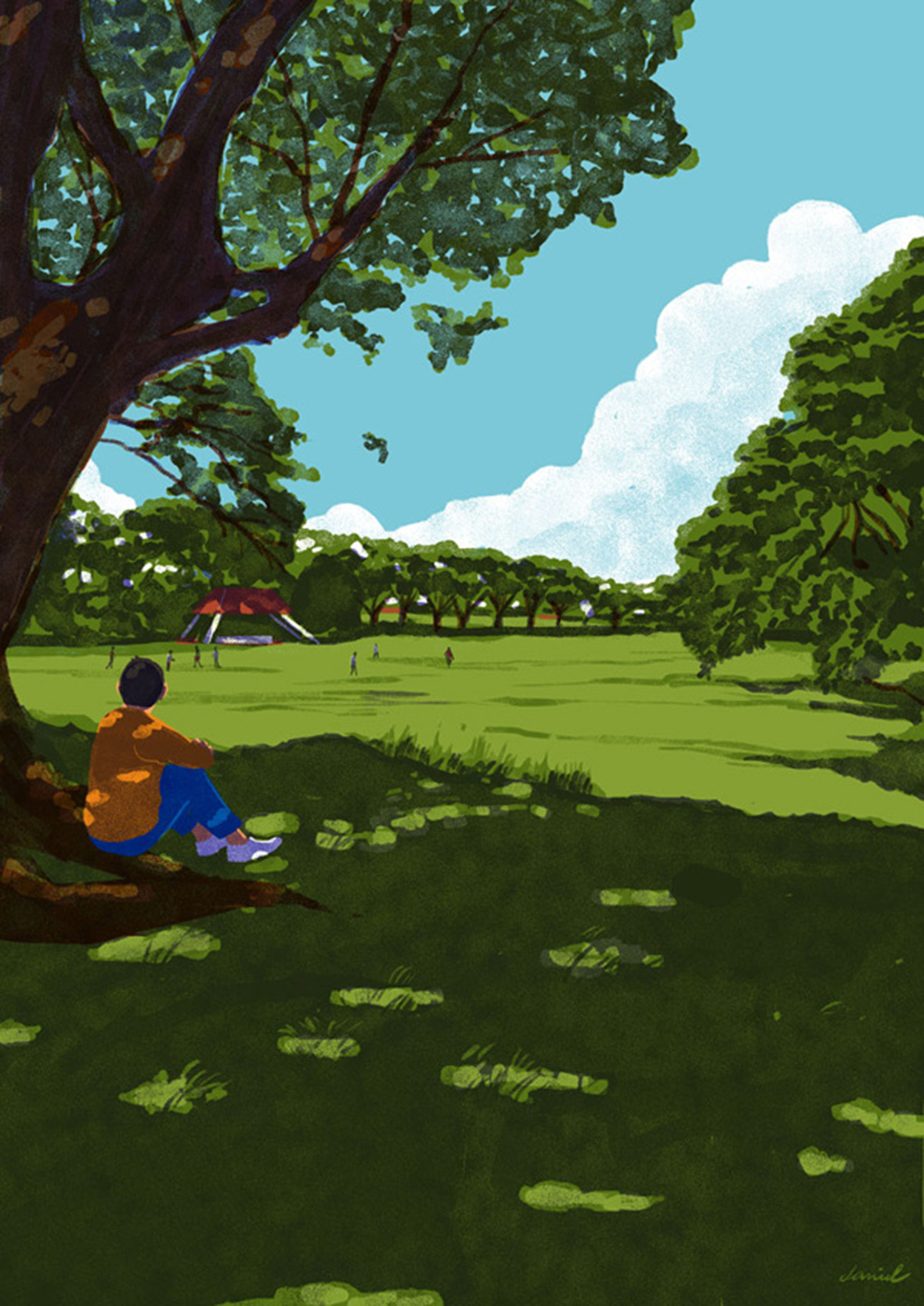 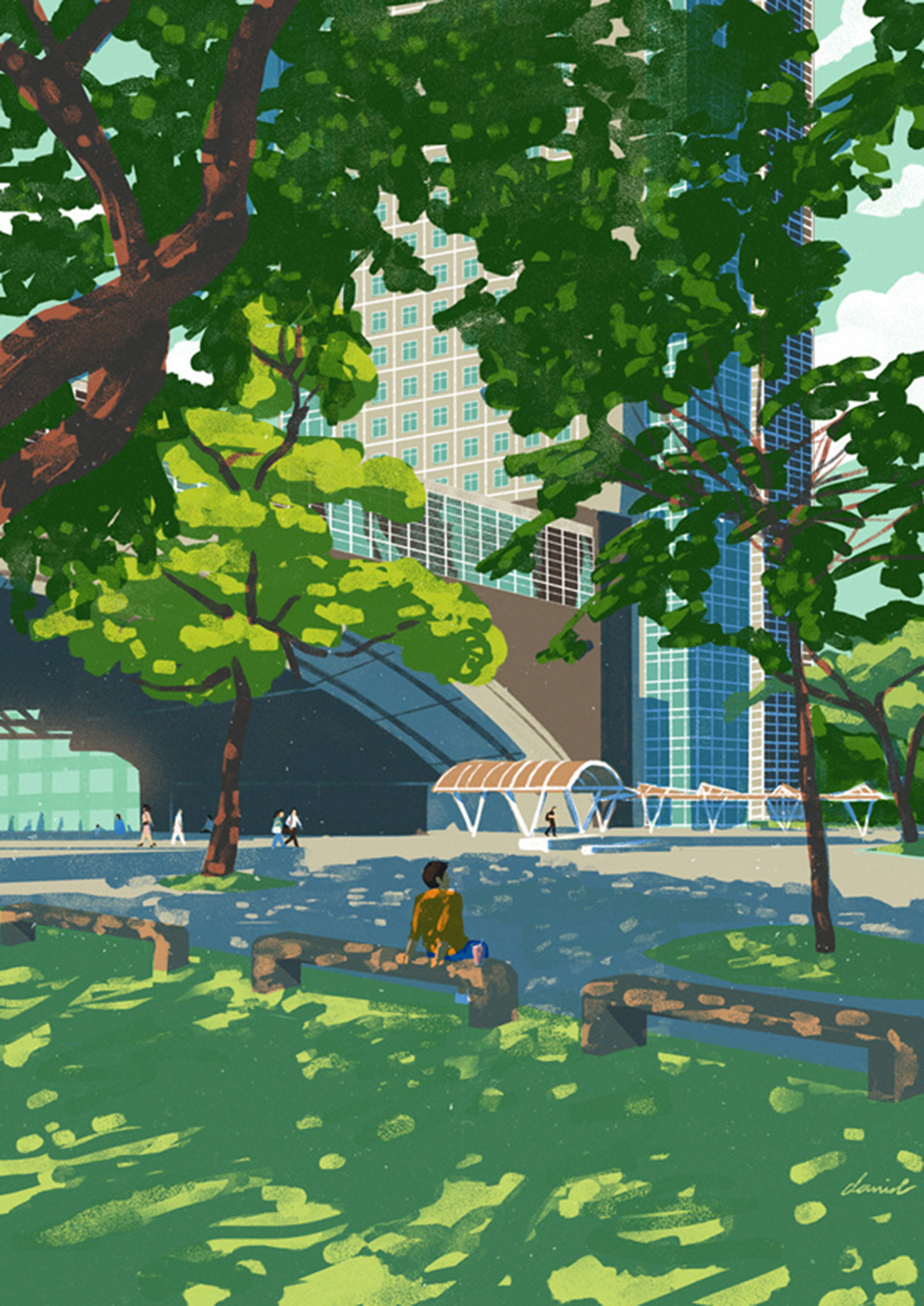 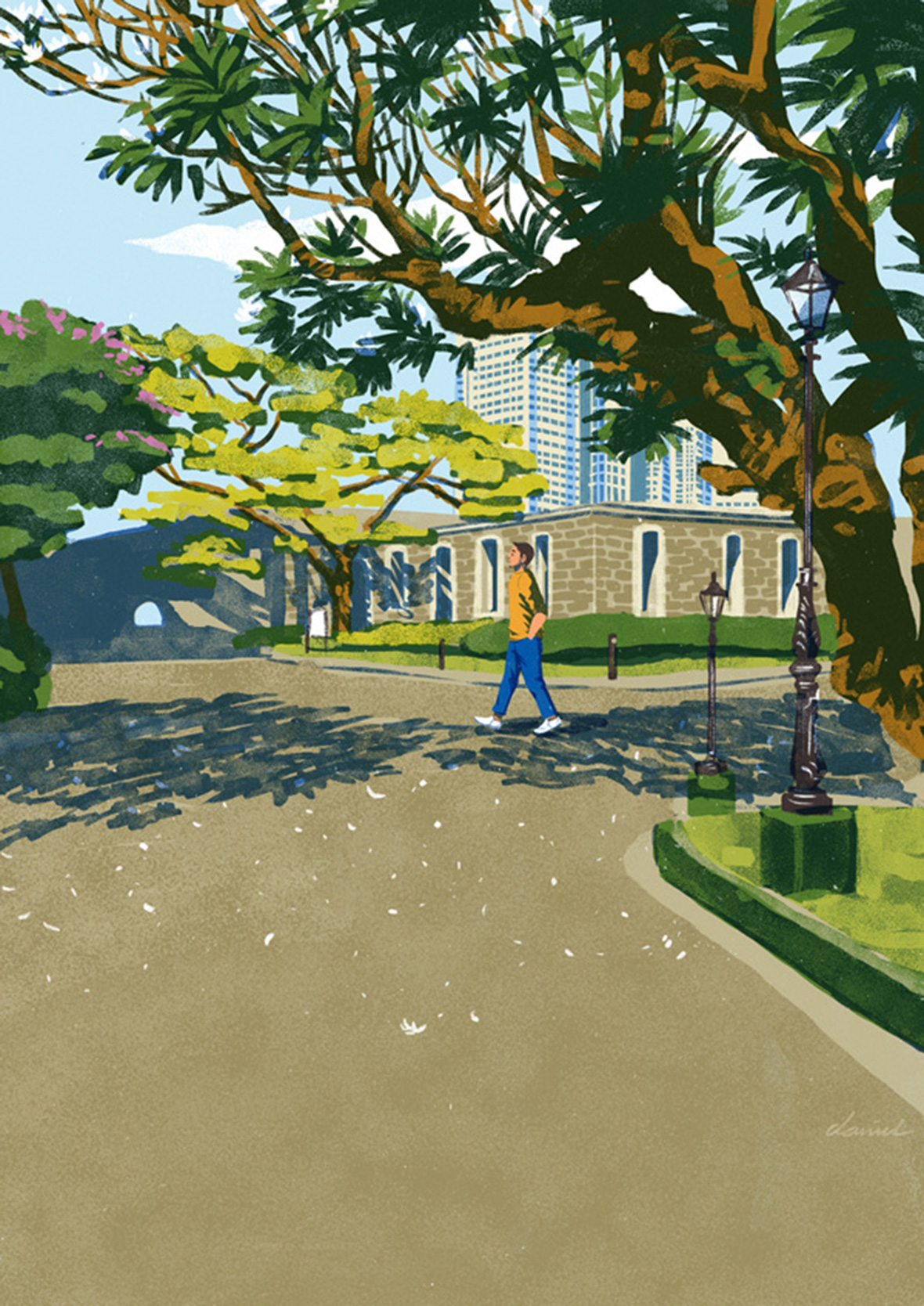 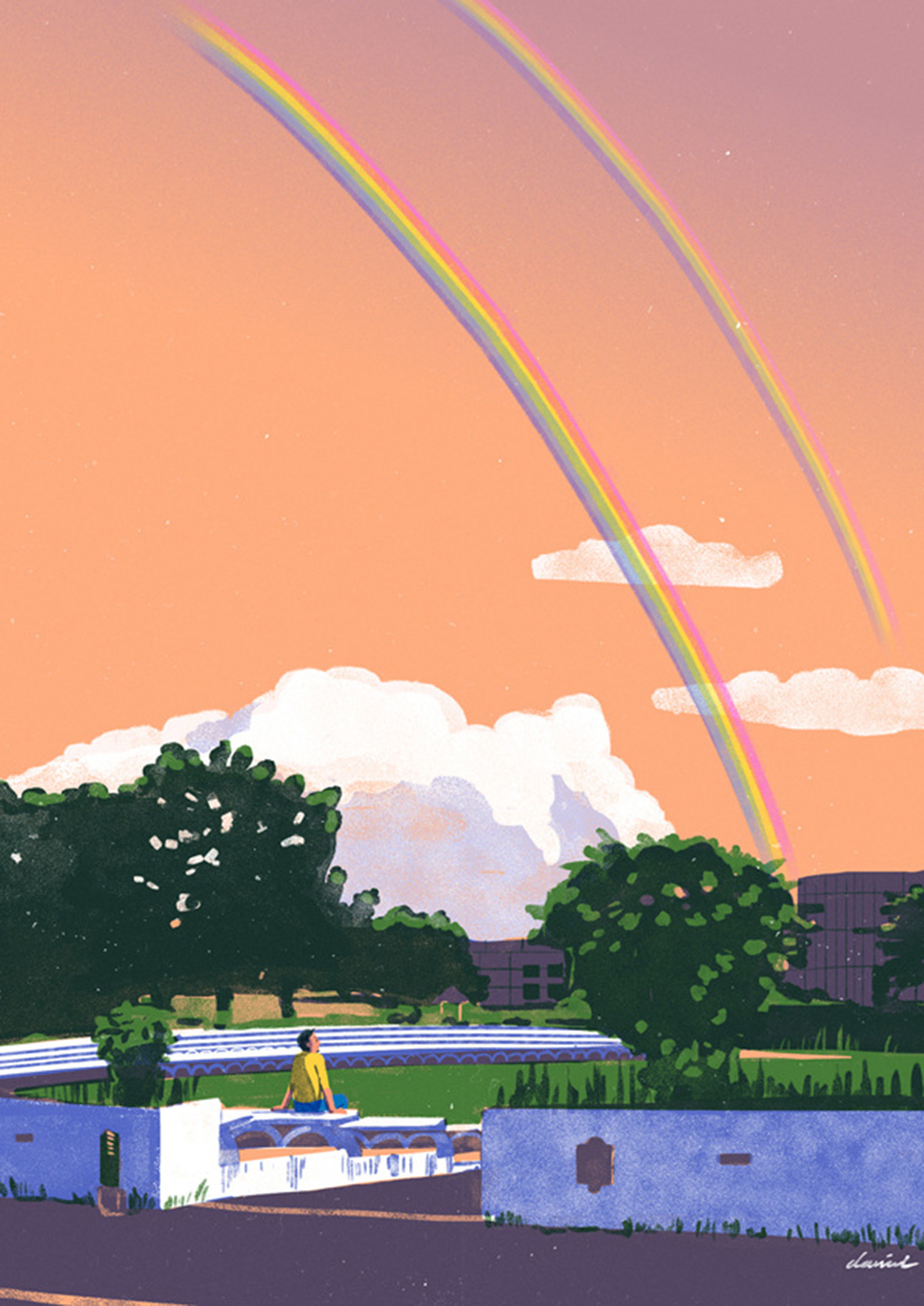 Within the first few illustrations of the project, Tingcungco was in awe of Manila—what made the city so beautiful was only revealed once he opened his eyes. His newfound appreciation of its nuances is fully manifested in 100 Views of Manila. In many of the illustrations, Tingcungco is even part of the scene, appearing to be soaking it all in. Take for example, in Sunken Garden at UP Diliman, he rests beneath a tree, its leaves and branches protecting him from the glare of the sun as he takes in the greenery and an open field before him. In Taking a Break Near the Ayala Tower One at the Ayala Triangle, one of the city’s most iconic skyscrapers is framed by a cluster of trees, Tingcungco reclines on a bench to revel in the quiet moment.

In Rajah Sulayman Theater at Fort Santiago, he strolls through the historical site with hands in his pockets, enjoying the rarely crowd-less landmark. In View from the %Arabica Maisonette Space, he enjoys a coffee in the air-conditioned cafe. In Double Rainbow at the UP College of Science Amphitheater, he watches a pair of rainbows stretching across the burnt-orange dusk sky. 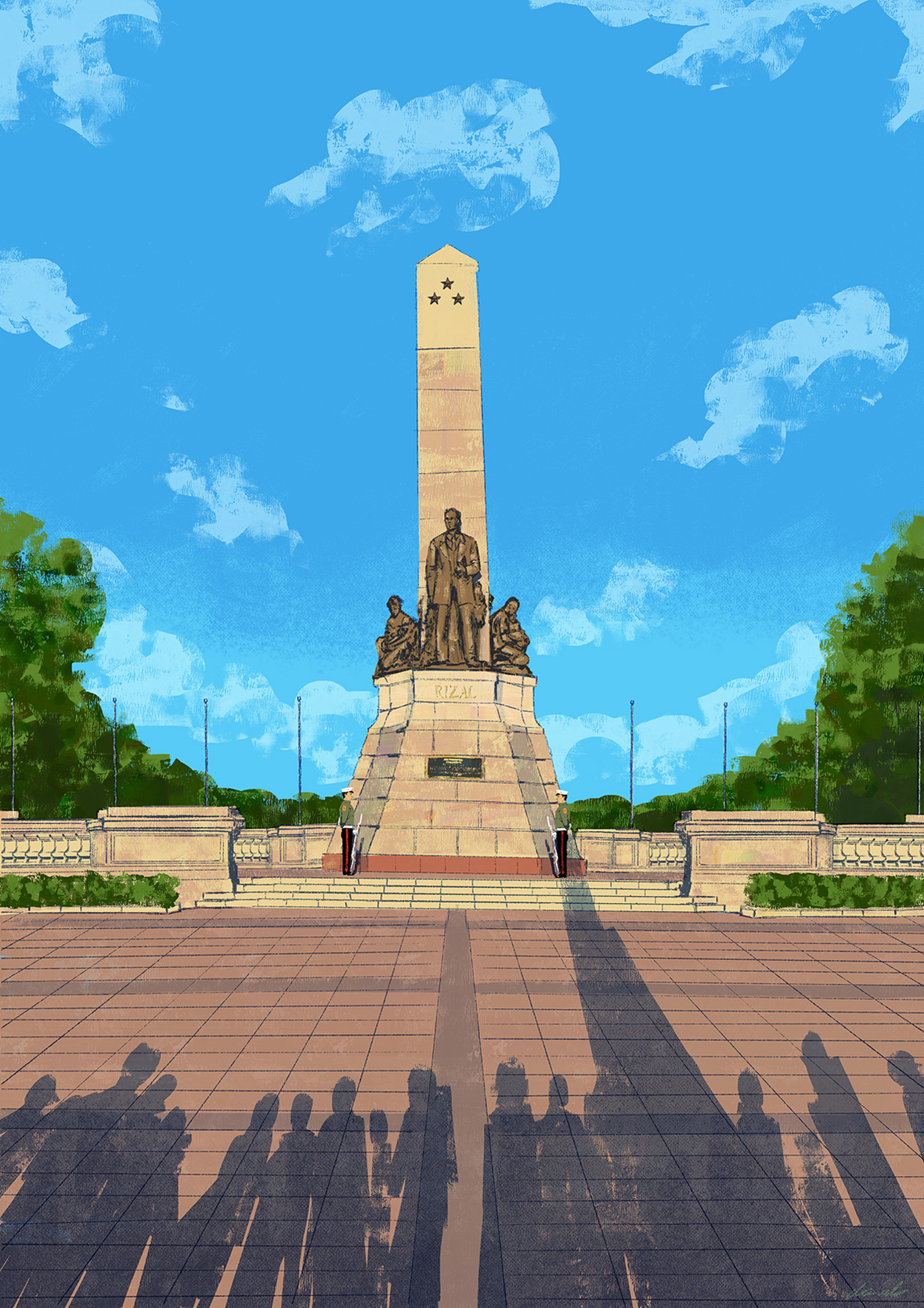 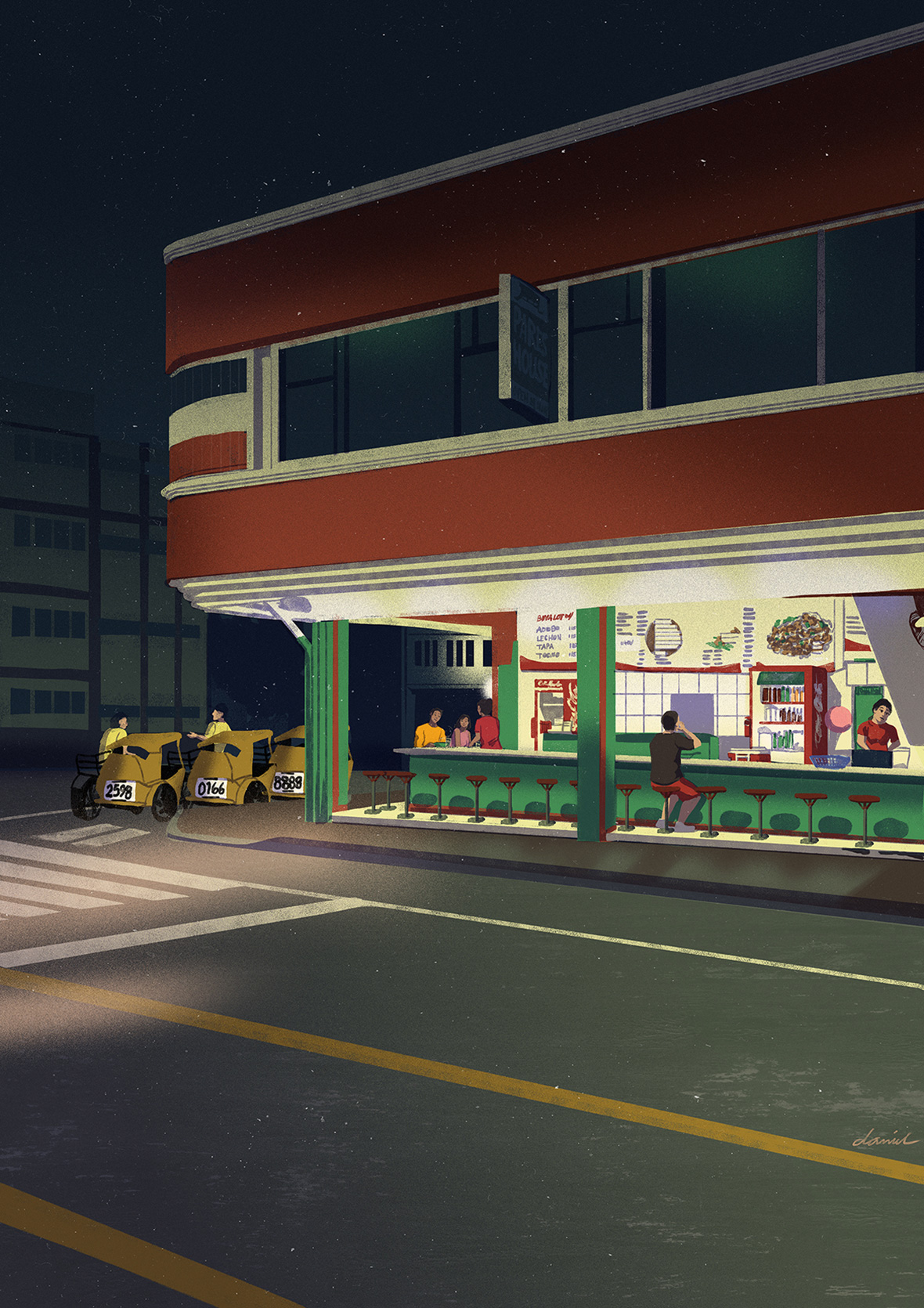 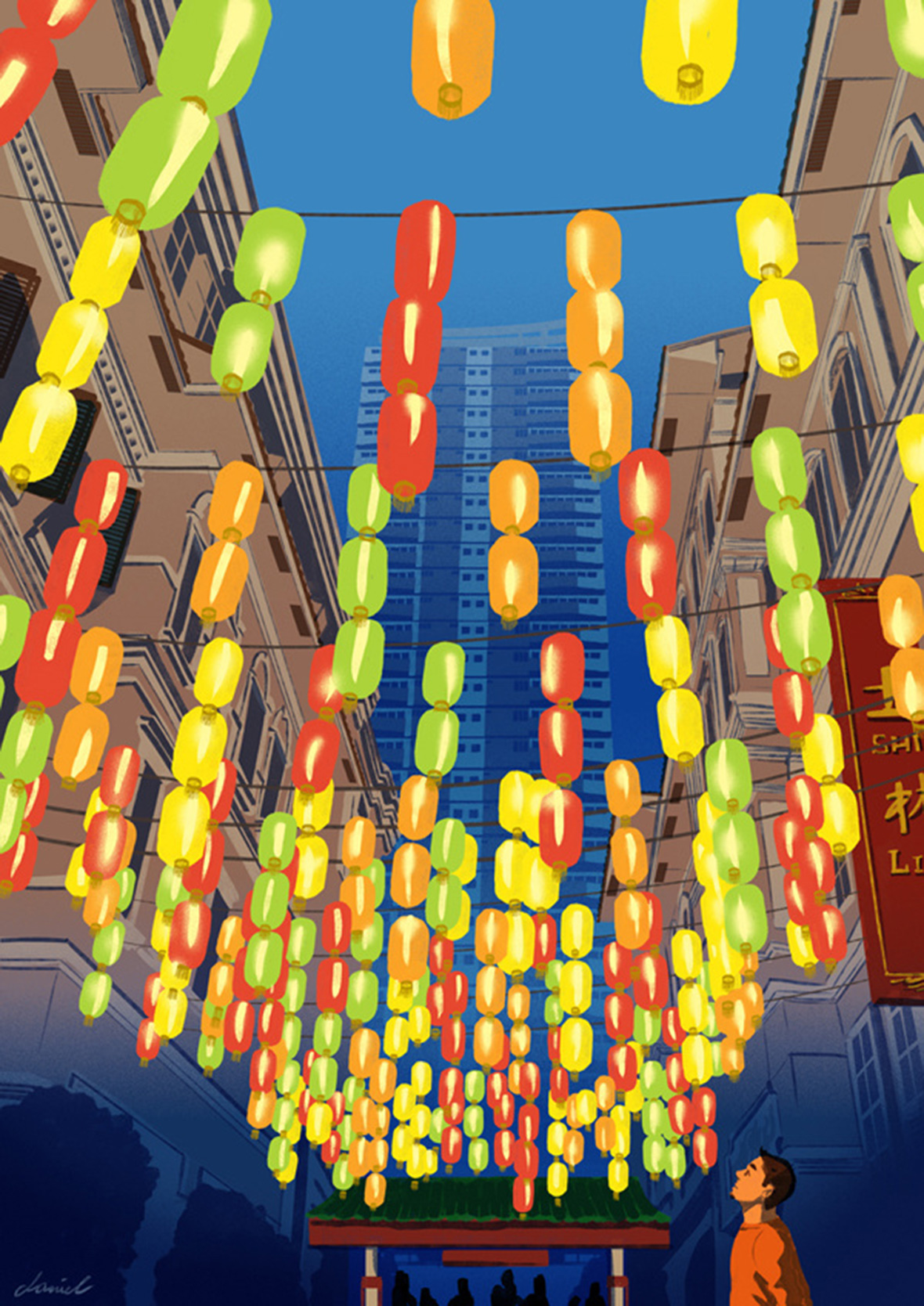 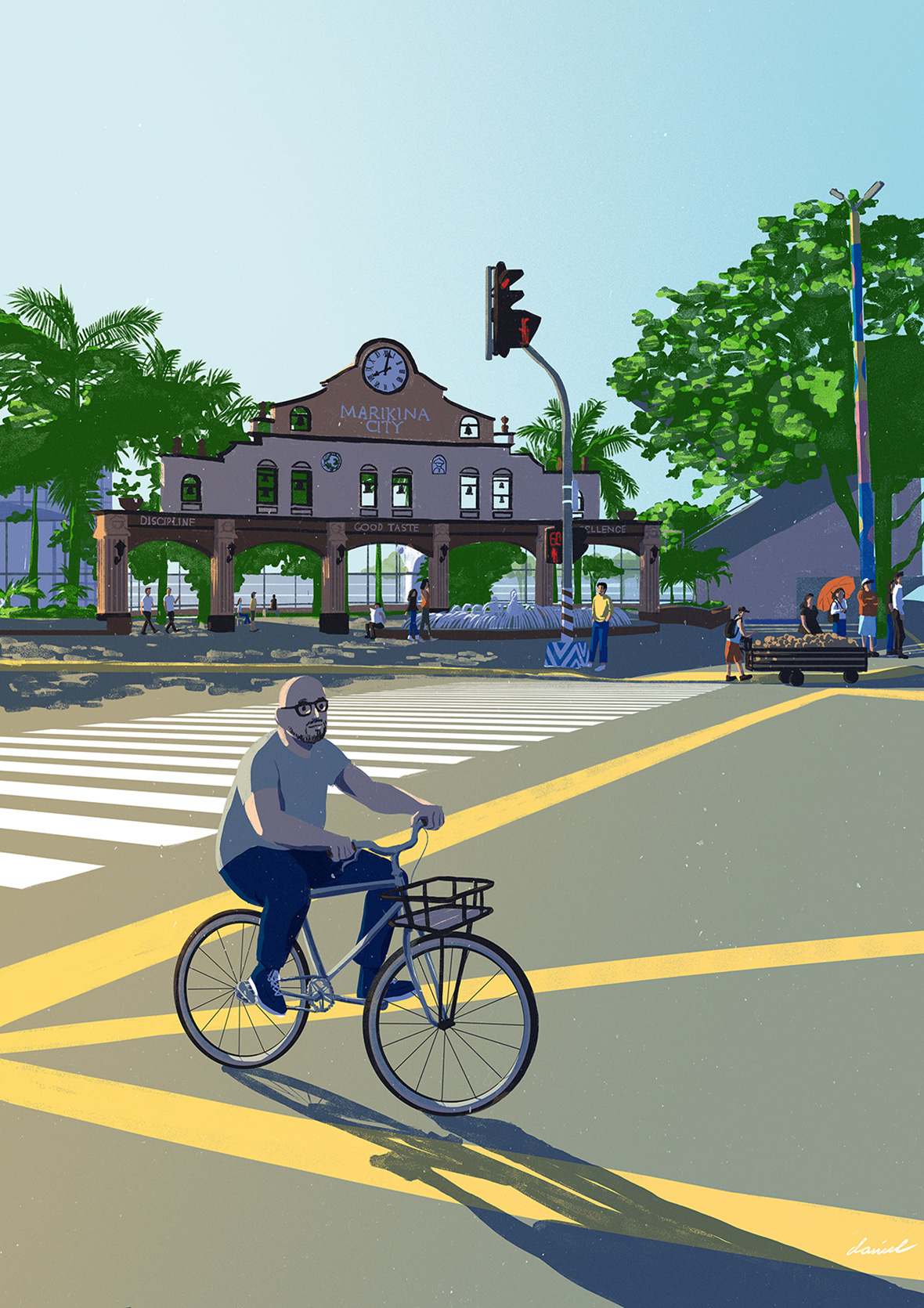 “With these illustrations, I feel that I have overcome my fear of drawing backgrounds,” he says. “I used to be scared and felt pressured by the details I had to draw, but later on, I learned to be more selective of what to paint by giving a personal impression and interpretation of the city. It is more about capturing the mood and the feeling Manila gives off, which I hope the people who have seen my works have felt.” 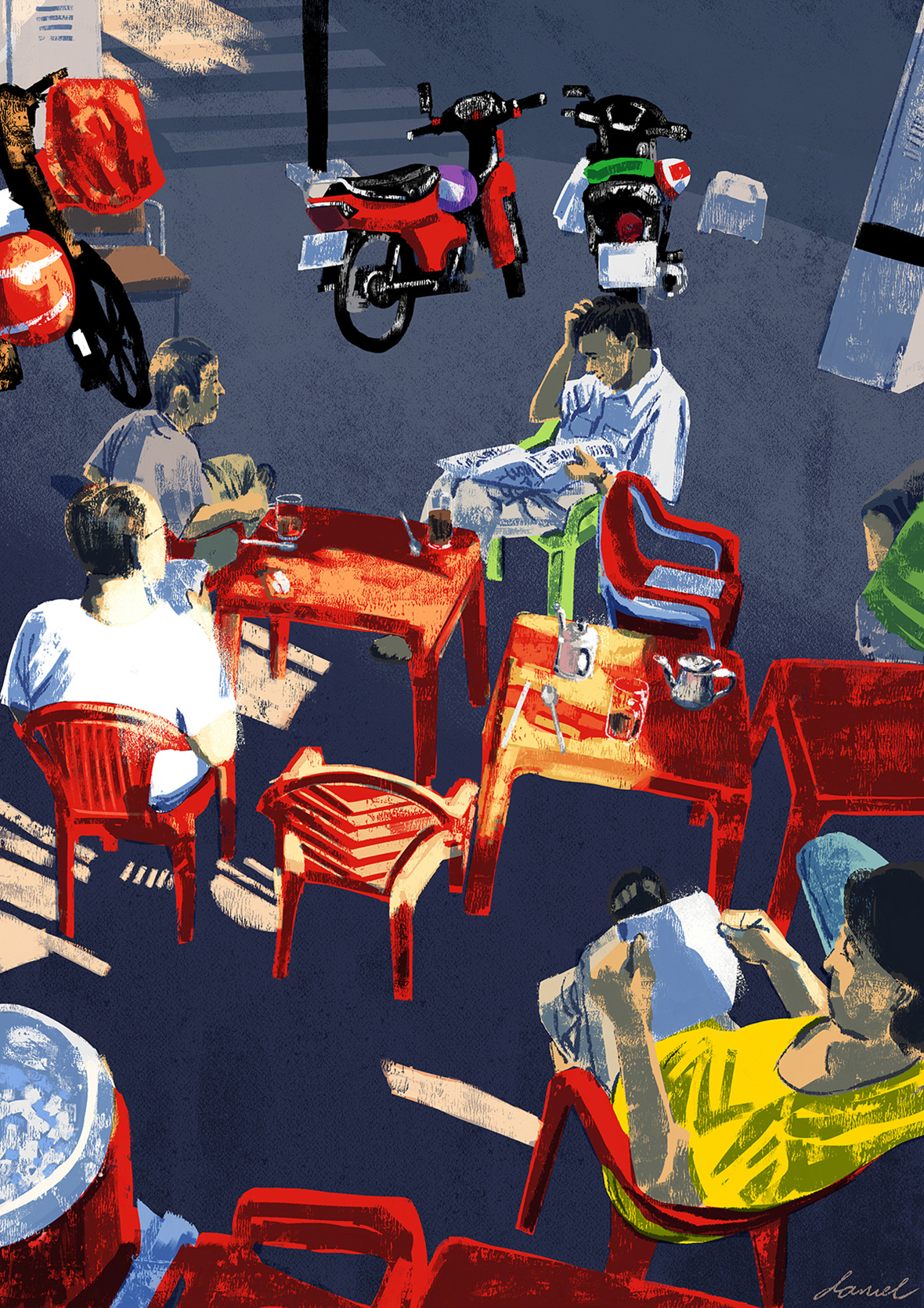 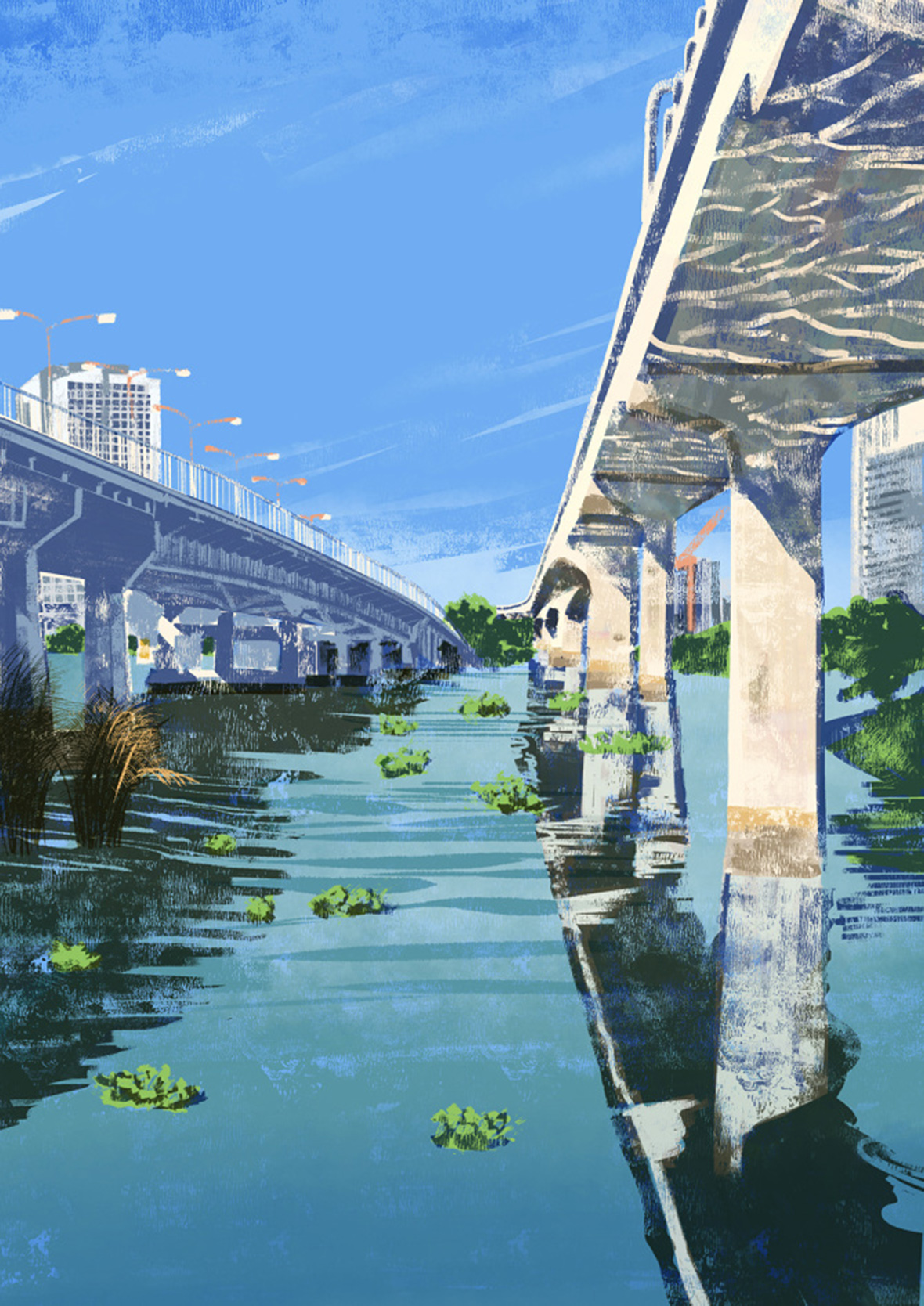 In 2019, Tingcungco moved to Ho Chi Minh City for a job offer at an ad agency. There, he continued working on his Manila project. But after a few days of exploring the city, he found himself under the spell of Saigon, and he decided to extend the project to include the Vietnam capital. “I did not plan on continuing with Saigon and wanted to move on to create another project, but within a few days of roaming around Ho Chi Minh, I decided it could be a way to keep refining my artistic skills and learn more about the city.”

With a camera in tow, Tingcungco strolls around Ho Chi Minh to capture the city’s defining nuances and components, the same method he employed for his Manila series. For the artist, photography solidifies his art as it bestows him the ability to register the places and spaces he visits during his walk. While the camera collects the information about the design of what he will create, the way he replicates the ambiance and emotions of a setting is a quality that no camera lens can duplicate.

He shrugs off the stigma that surrounds the use of references in illustration, believing that reproducing photographs in paintings doesn’t necessarily shred originality. Tingcungco believes that having images at hand can bring about clarity in the direction of his artworks. “As long as there is a transformative effect that I can apply to the final work, such as tweaking the details, colors, and mood, then it would not just be a direct copy of the photograph, but rather turning the creation as my own.” 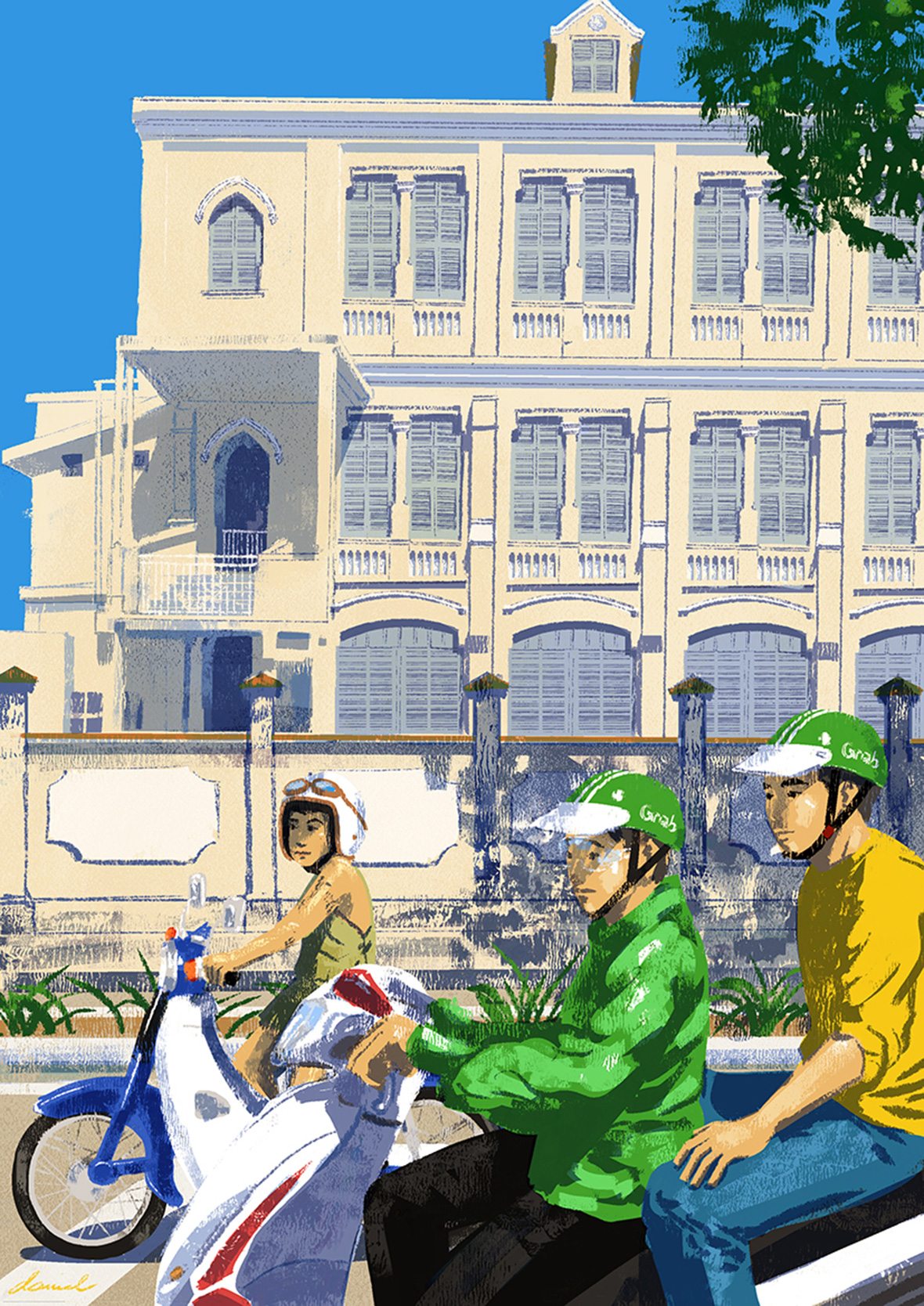 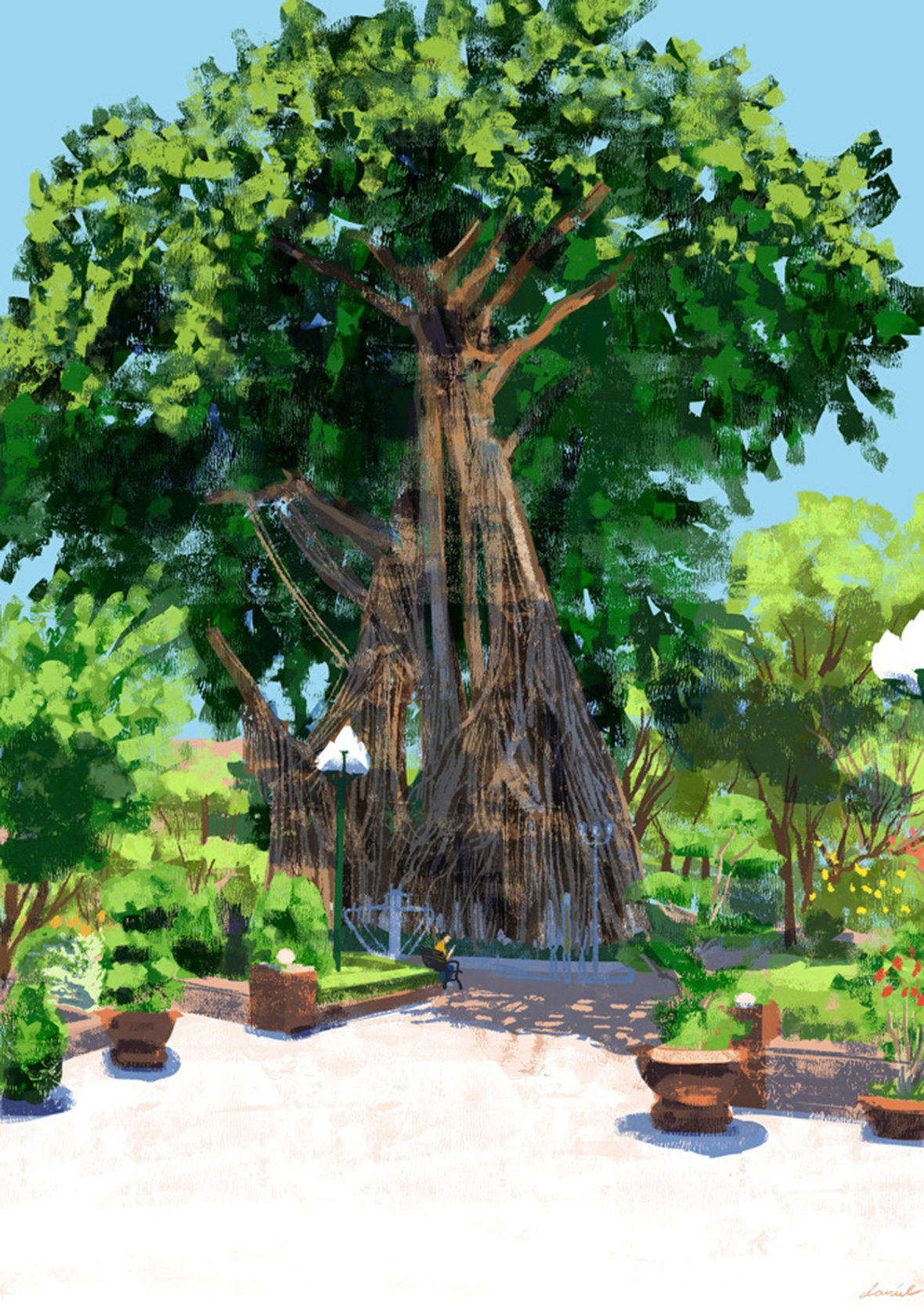 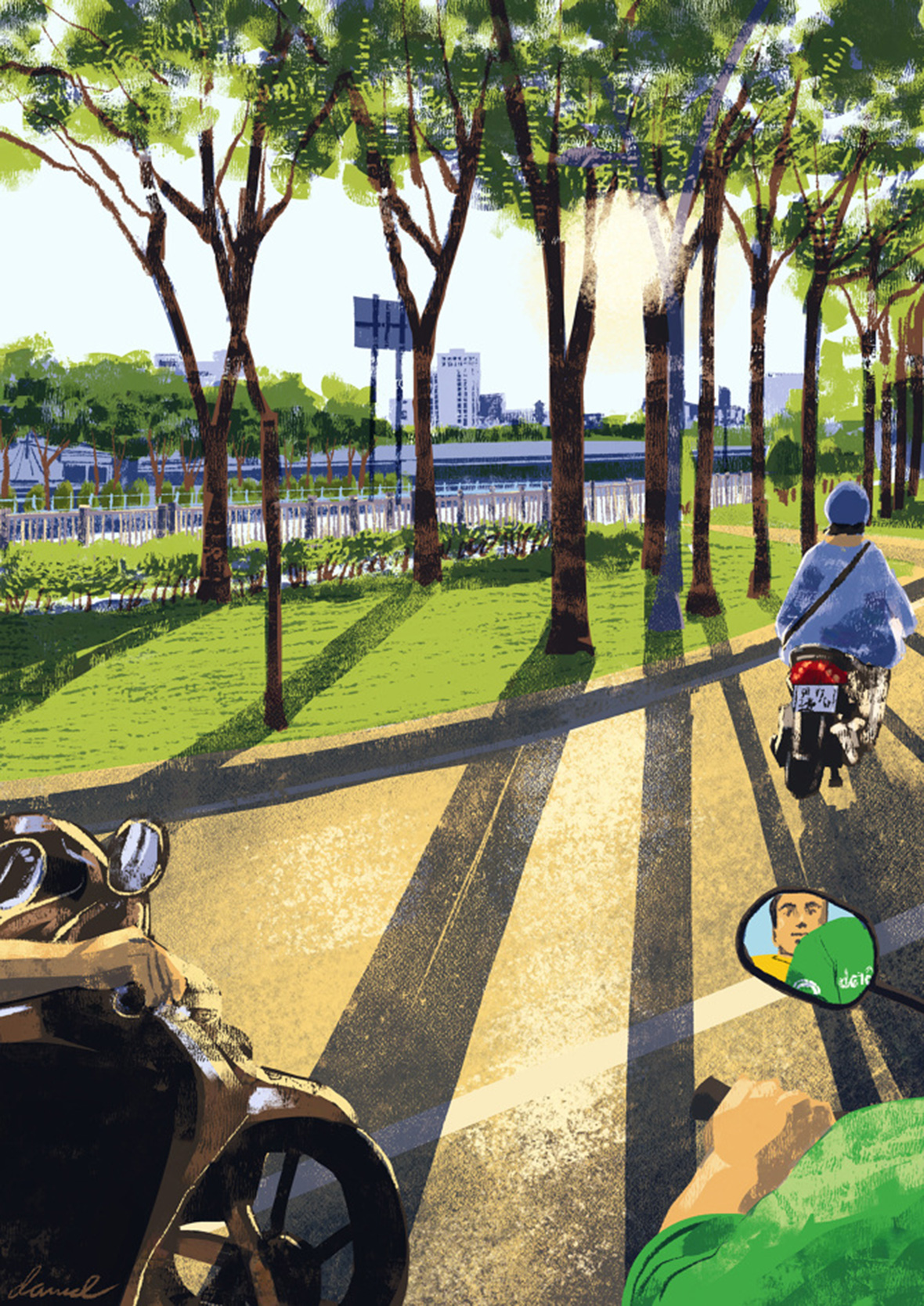 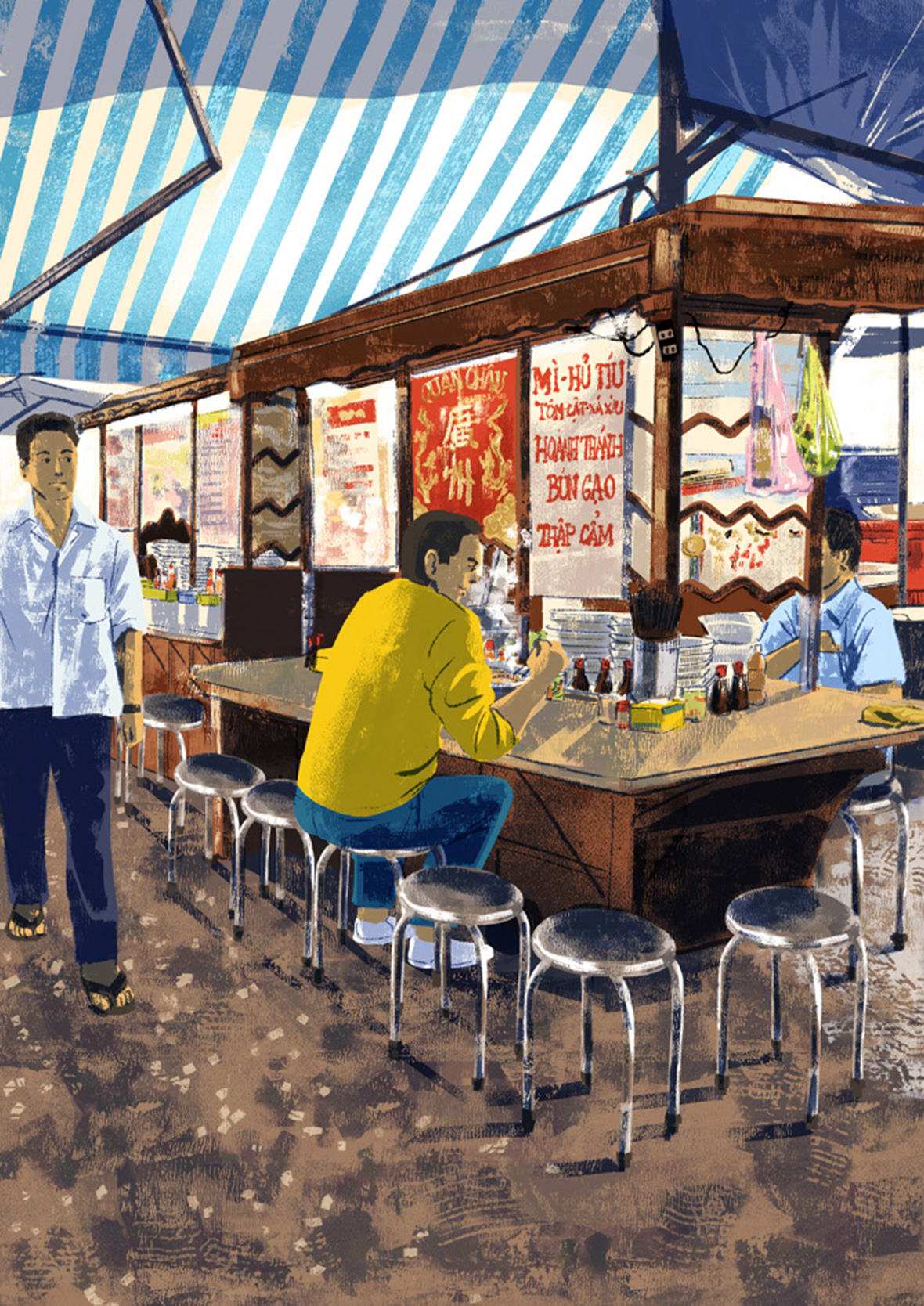 Tingcungco believes that Saigon is often subject to misconceptions. Through the project, he yearns to paint the city in a new light, depicting it for what it is—a progressive and vibrant place that’s retained its customs and traditions in the face of modernity. The way he paints 100 Views of Saigon is slightly different from his Manila compendium: the strokes are broadened, the hues are more subdued, but the smudges and grainy textures of the original project have carried over as well as the artist’s own presence in the majority of the scenes.

In the first illustration of the series, On Nguyễn Hữu Cảnh, Passing by Convent Saint Paul de Chartres, Tingcungco rides on the back of a motorbike taxi. In the background, the beige facade of the iconic chapel fills out the composition. In The Old Banyan Tree at Bach Tung Diep Park, he’s hardly visible in frame, a tiny figure dwarfed by the towering tree.

In Hot Hủ Tiếu Mì at Tân Định Market, Tingcungco is seated at a streetside stall enjoying a bowl of hot Hủ Tiếu Mì, a rice noodles soup with pork stock, fresh herbs, and onions. In Afternoon Ride along Dakao, he rides on the back of another motorbike taxi, taking in the sun rays peeking through a row of trees. 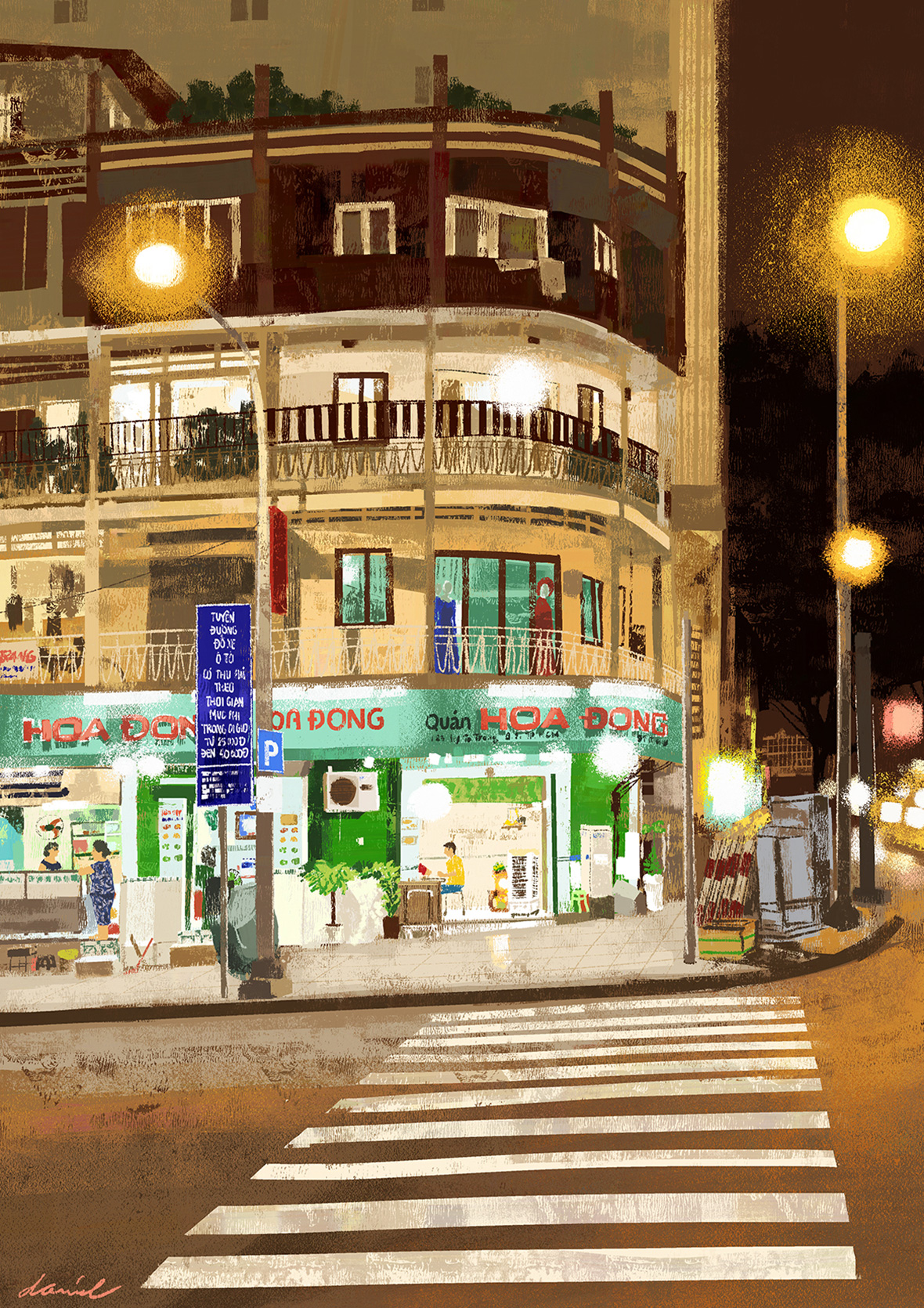 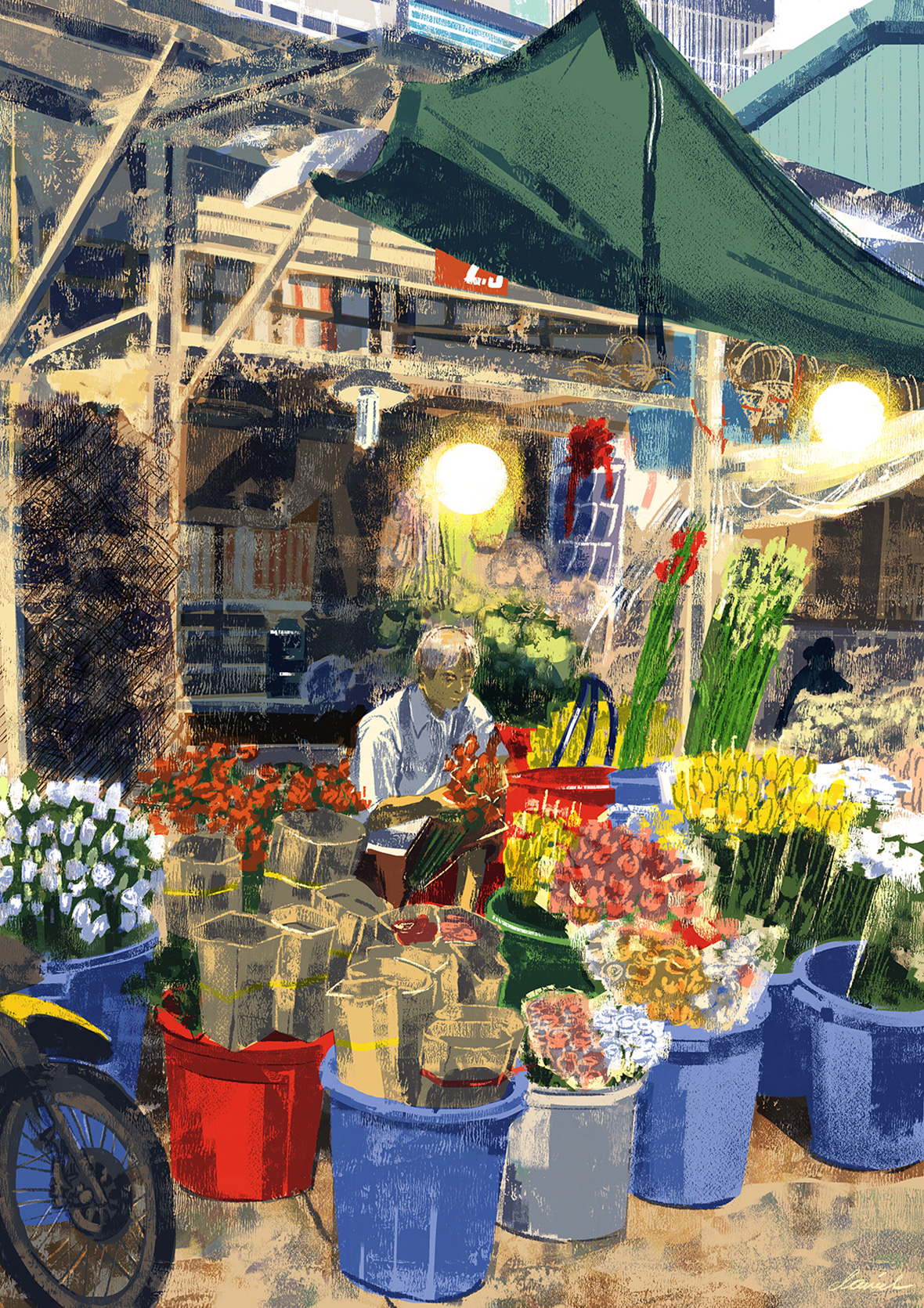 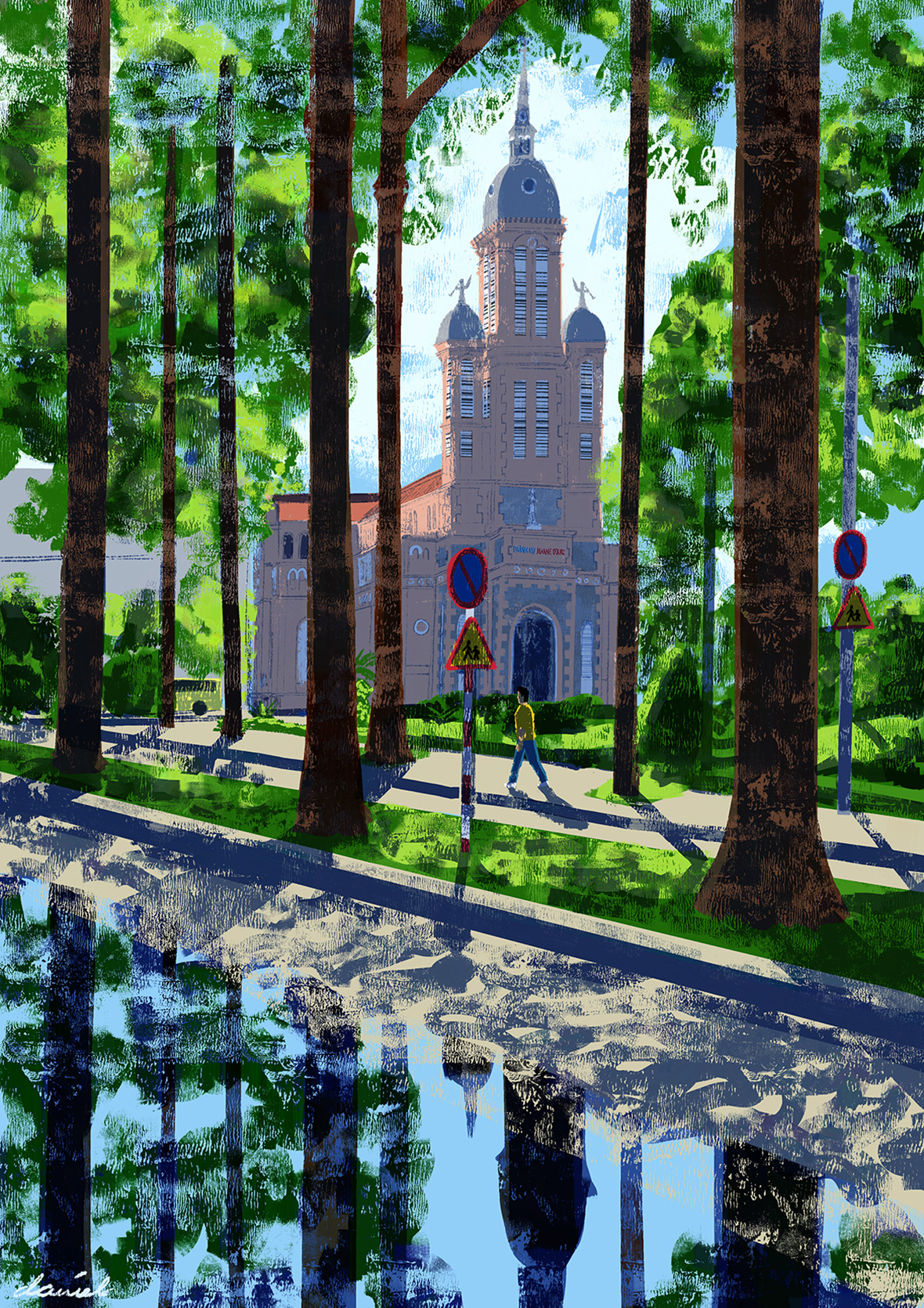 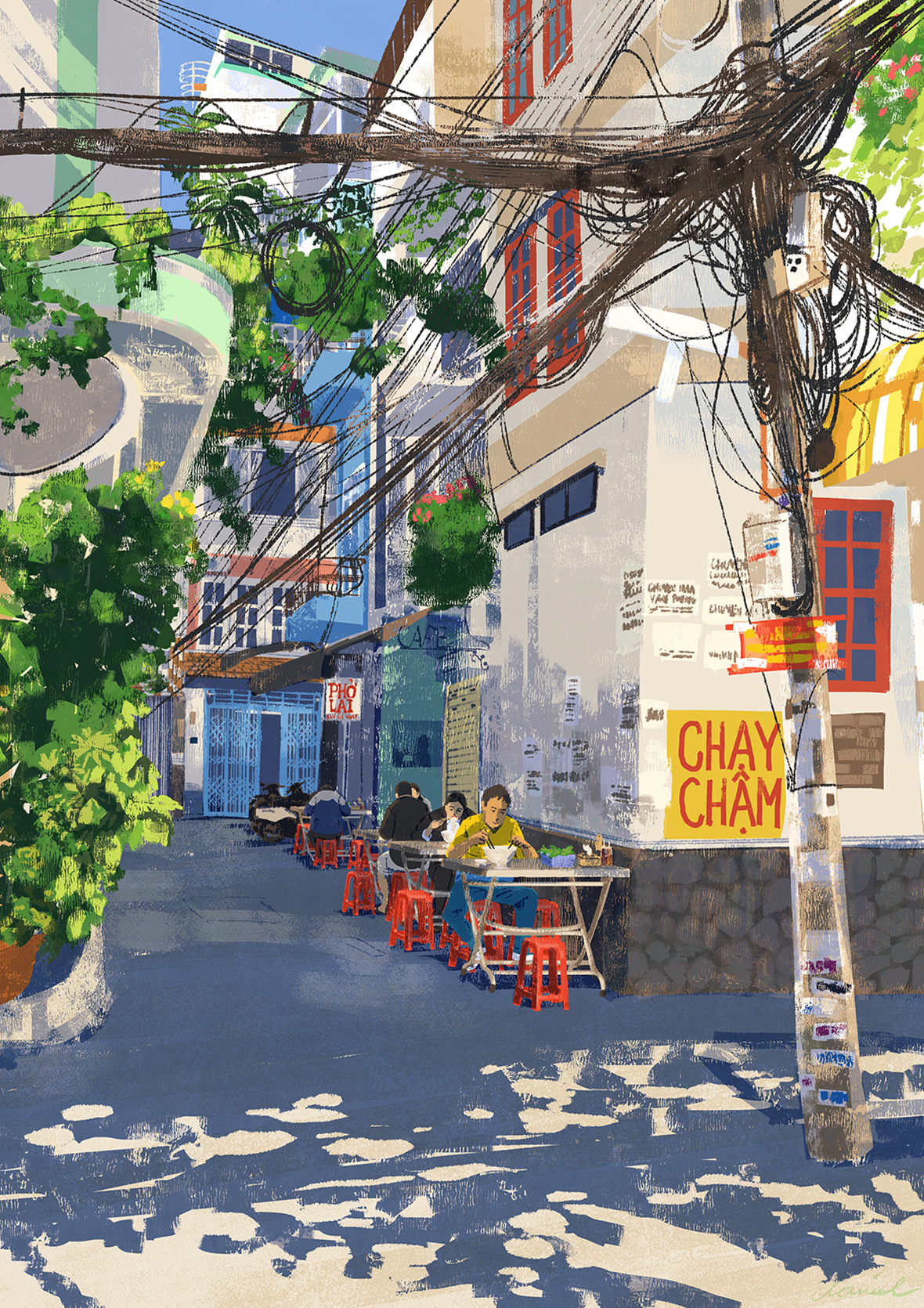 Having now lived in Saigon for over two years, Tingcungco has noticed many parallels with Manila, such as its scorching climates and the friendly locals. These similarities have allowed him to feel as if he had never left the Philippines in the first place. “But between the two cities, there is less traffic in Ho Chi Minh due to the number of bikes, which take up less space on the roads,” he says. “There are also tons of green areas around the city as the country gives importance to parks and recreation for its people. There is not much of a mall culture here unlike in Manila; it is more traditional, with people visiting small shops situated in alleys of buildings.” 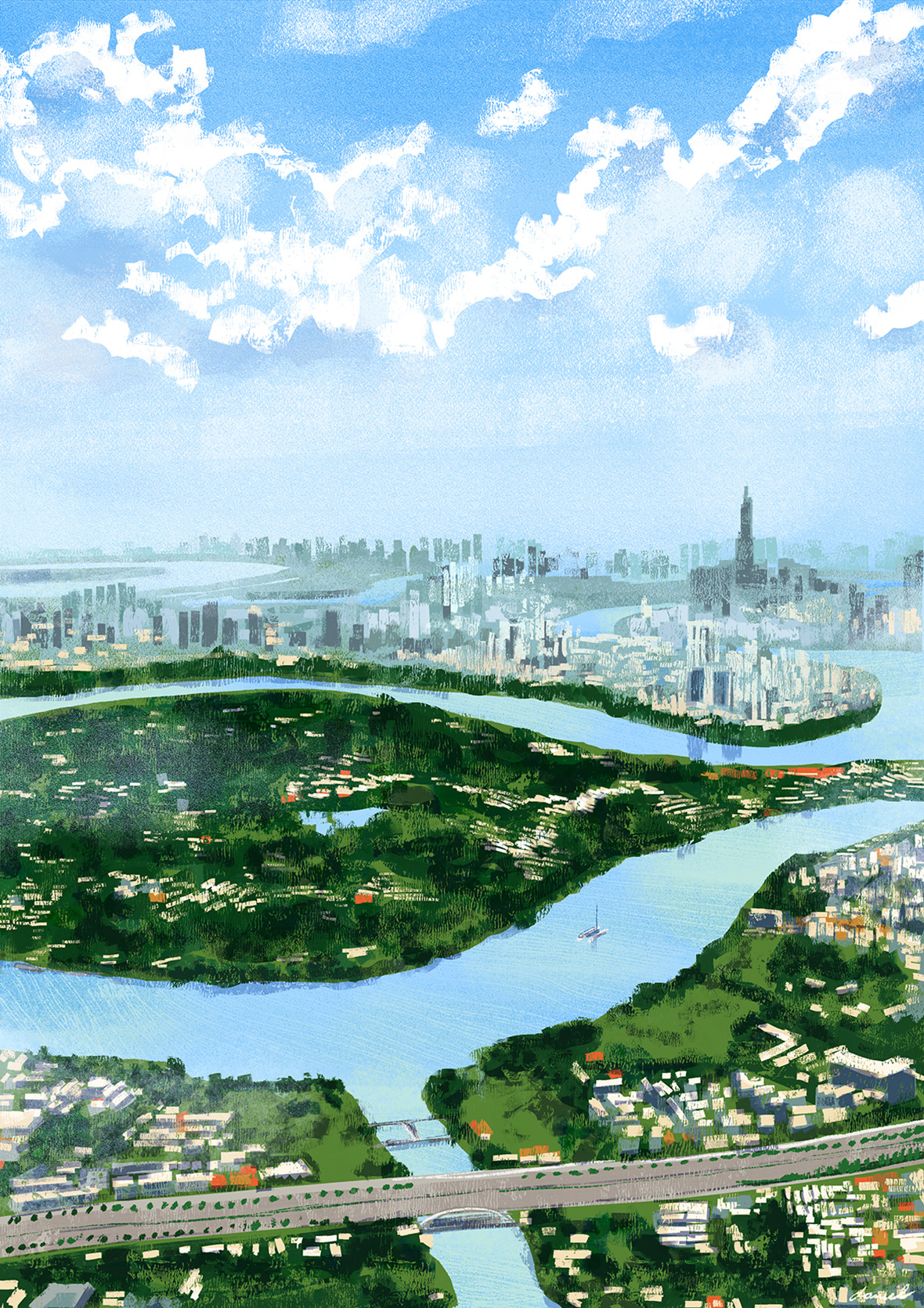 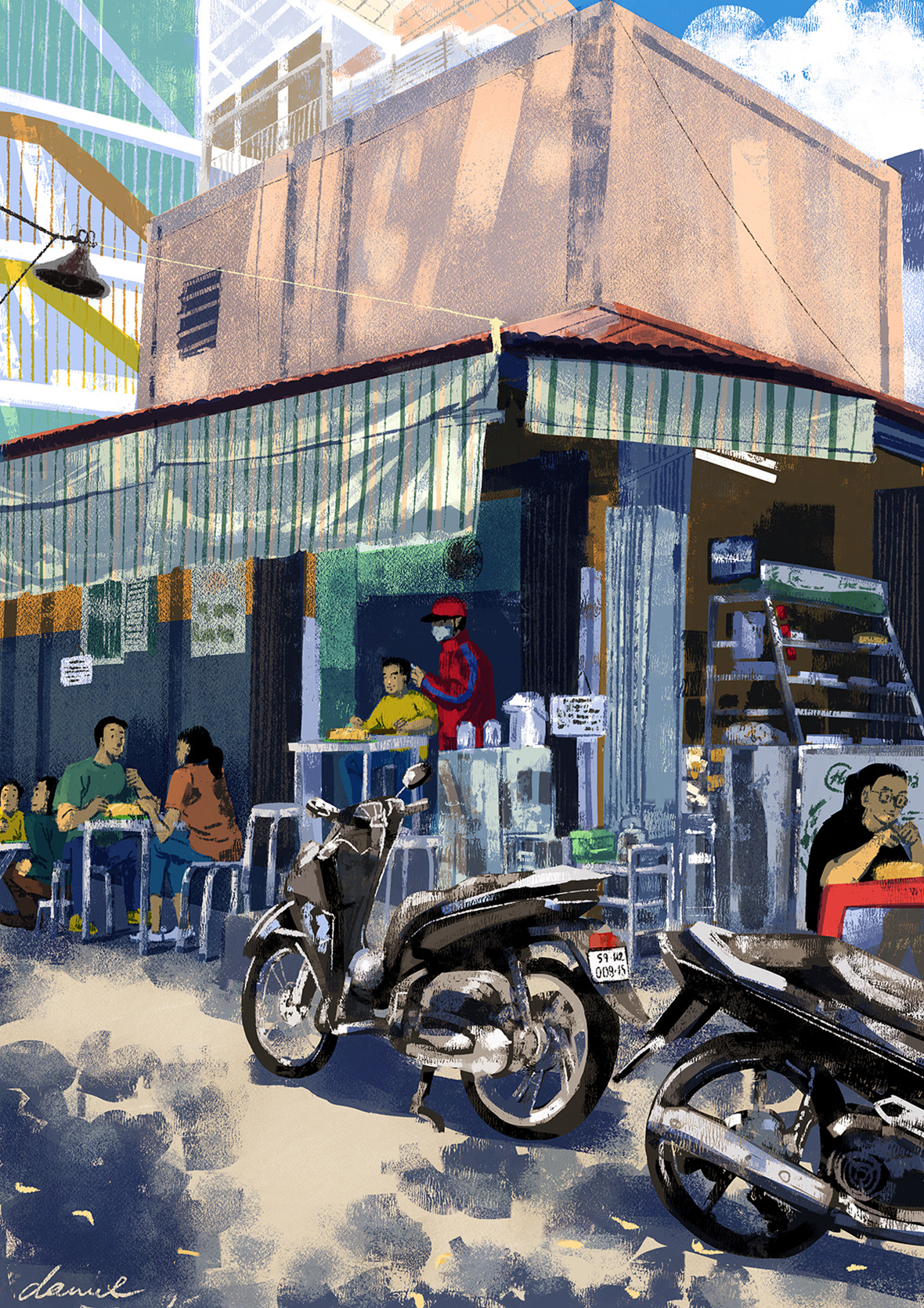 The ongoing projects have yet to reach his goal of 100 paintings, but Tingcungco isn’t in a rush. He’s happy with savoring the journey, taking his time to explore the city at his own pace, snapping interesting photos along the way, and learning more about the two cities. “Wherever I go somewhere, there will always be a part of that place that I carry with me, whether it is a song I hear, the scent of the air, or the lighting of that time of day.”