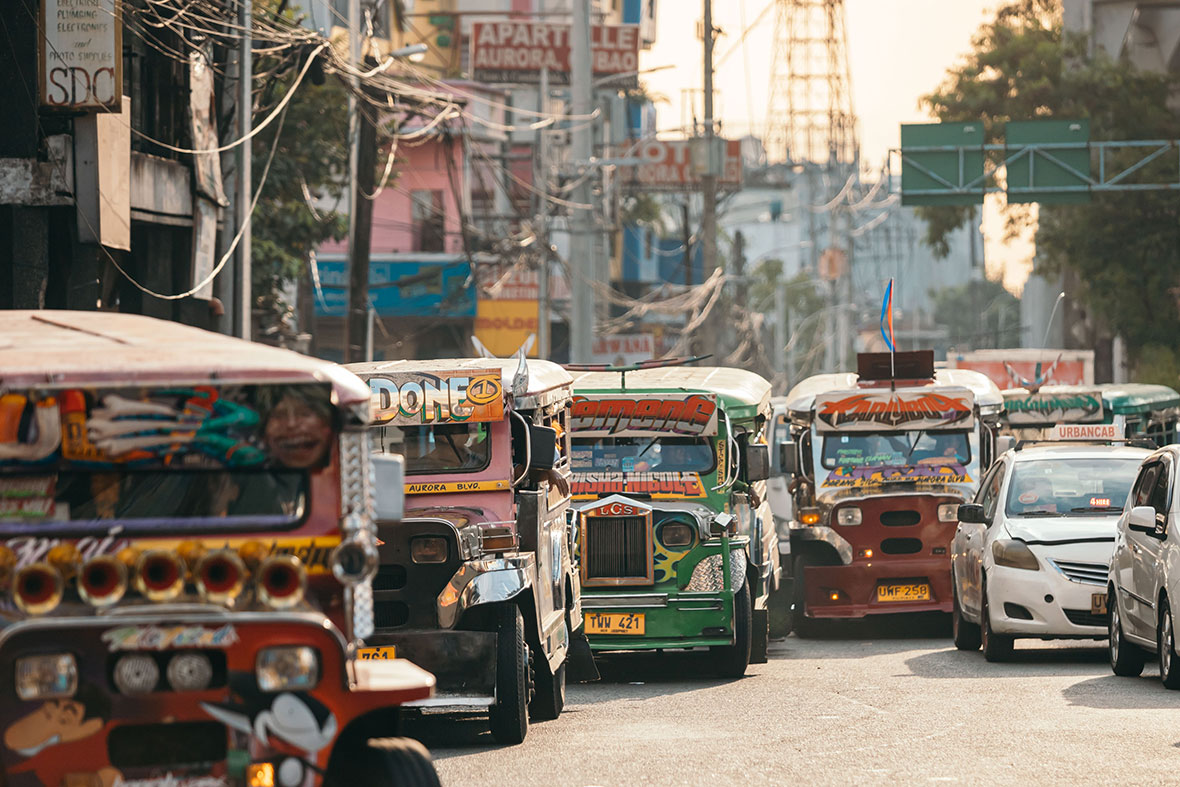 It’s rush hour in Metro Manila, which means gridlocked streets for several hours. The city is one of the world’s most congested. Within this tangle of cars and scooters and stationary running motors, one type of vehicle stands out from the rest: the jeepney.

Jeepneys are a uniquely Filipino mode of public transportation that appeared after World War II, which left the country’s infrastructure severely damaged. After the war, American troops left behind Willy Jeeps—the ubiquitous four-person green jeeps of war-movie fame—as it was costly to ship them home. Locals set about retrofitting them to meet their transportation needs. Though they were born as a temporary solution, they’ve now become a mainstay across the country. Most of the original jeepneys are out of commission, and the ones found on the road today were produced by local car manufacturers in the years since. 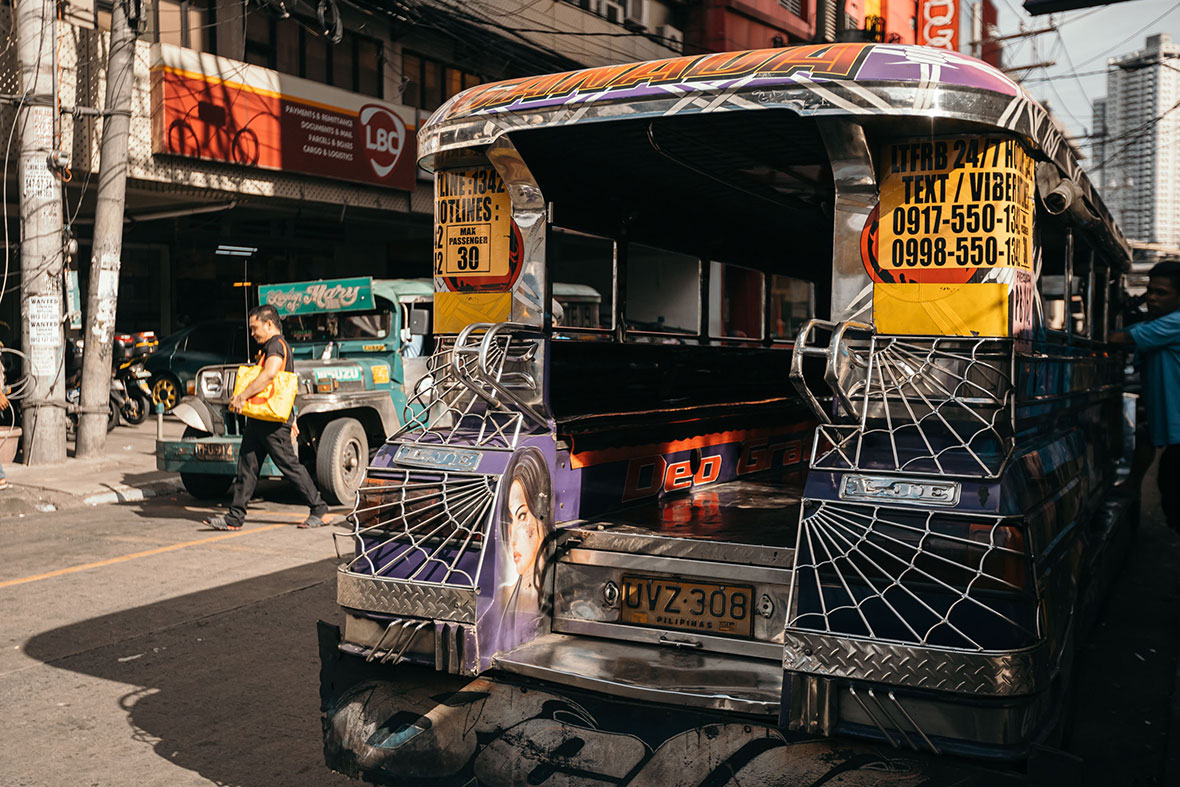 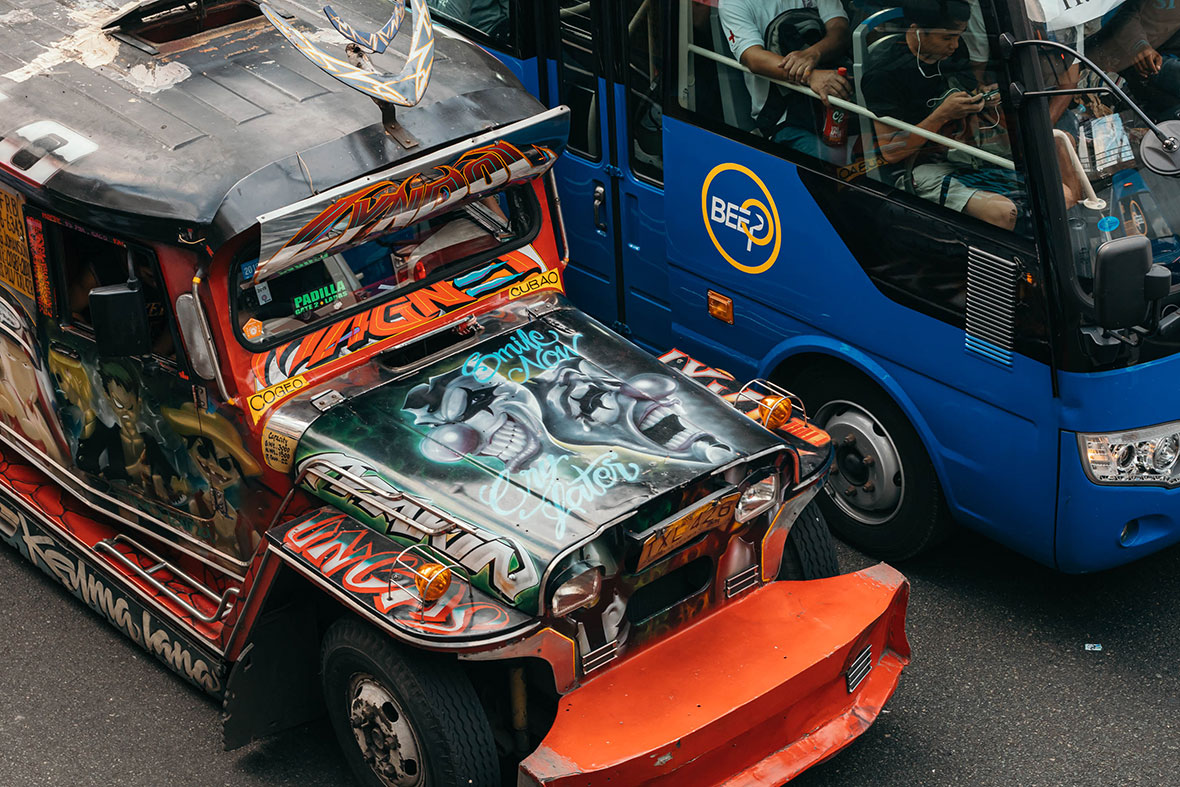 A typical jeepney can carry about 20 people in the back. People sit on twin benches facing each other, with a few others hanging off the back if it’s packed. The base fare is 10 pesos, or around US $0.20, and they travel just about anywhere you need to go. In a country with limited bus routes and an even smaller rail line, it’s often the only affordable way to get where you’re going, unless you’re willing to pay premium rates for a taxi or ride-hailing app. Once you climb on, you hand your cash to another rider and they pass it down to the driver, who then counts out change and sends it back down the line, often while driving. The ceilings are low and the windows are difficult to see out of, especially when crowded. Rain, heat, and fumes from nearby traffic easily enter the cabin, and in some of the more dilapidated jeeps, so does its own exhaust. When your stop comes, you call out to the driver or knock on the ceiling and jump out, sometimes directly in the middle of the street.

Jeepneys are often blamed for adding to Manila’s congestion, seeing as how their drivers often swerve across lanes to pick up customers and make frequent stops. But with the increase in population and rise in personal automobile ownership, the megacity is groaning under the strain now more than ever. 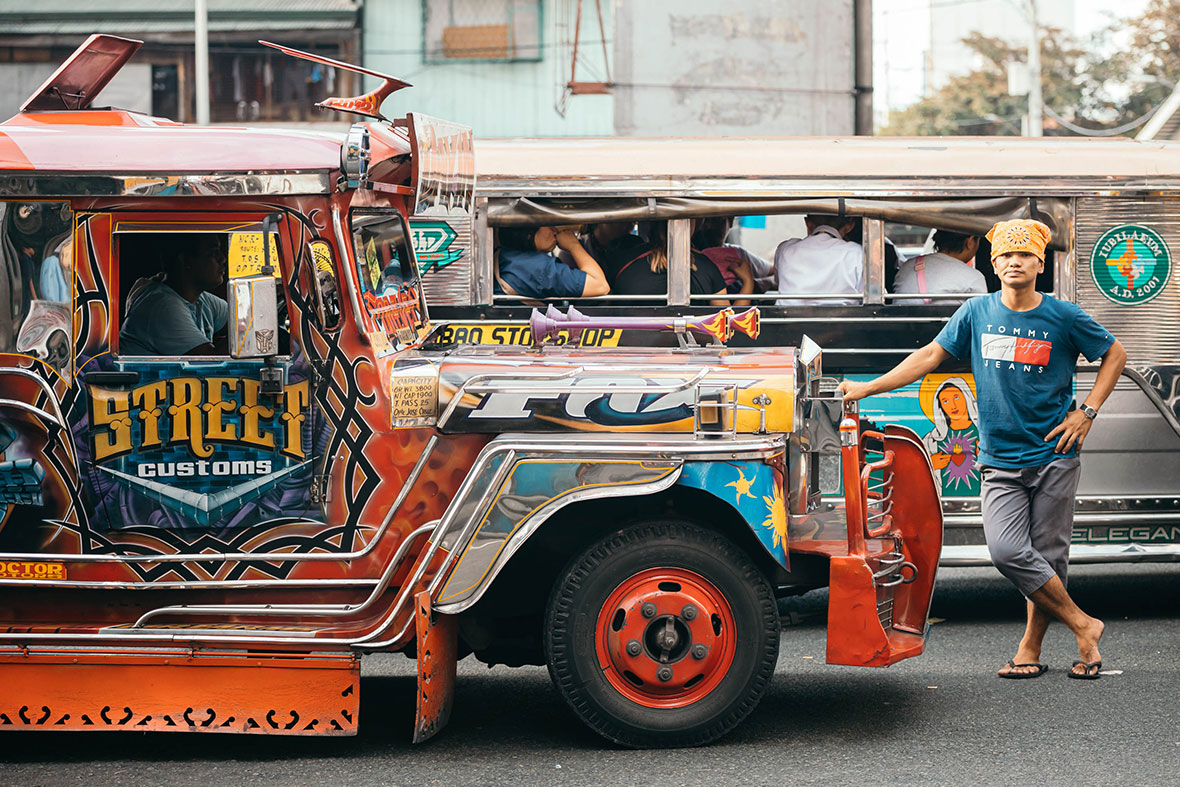 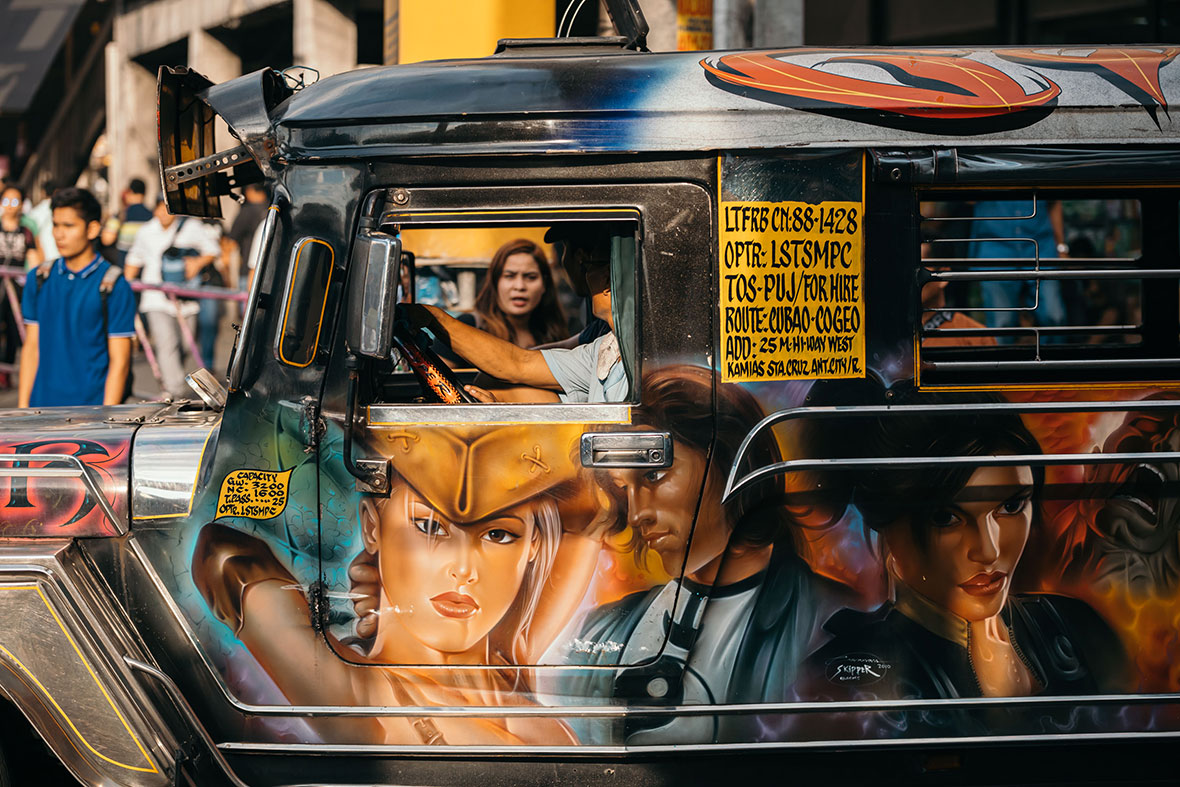 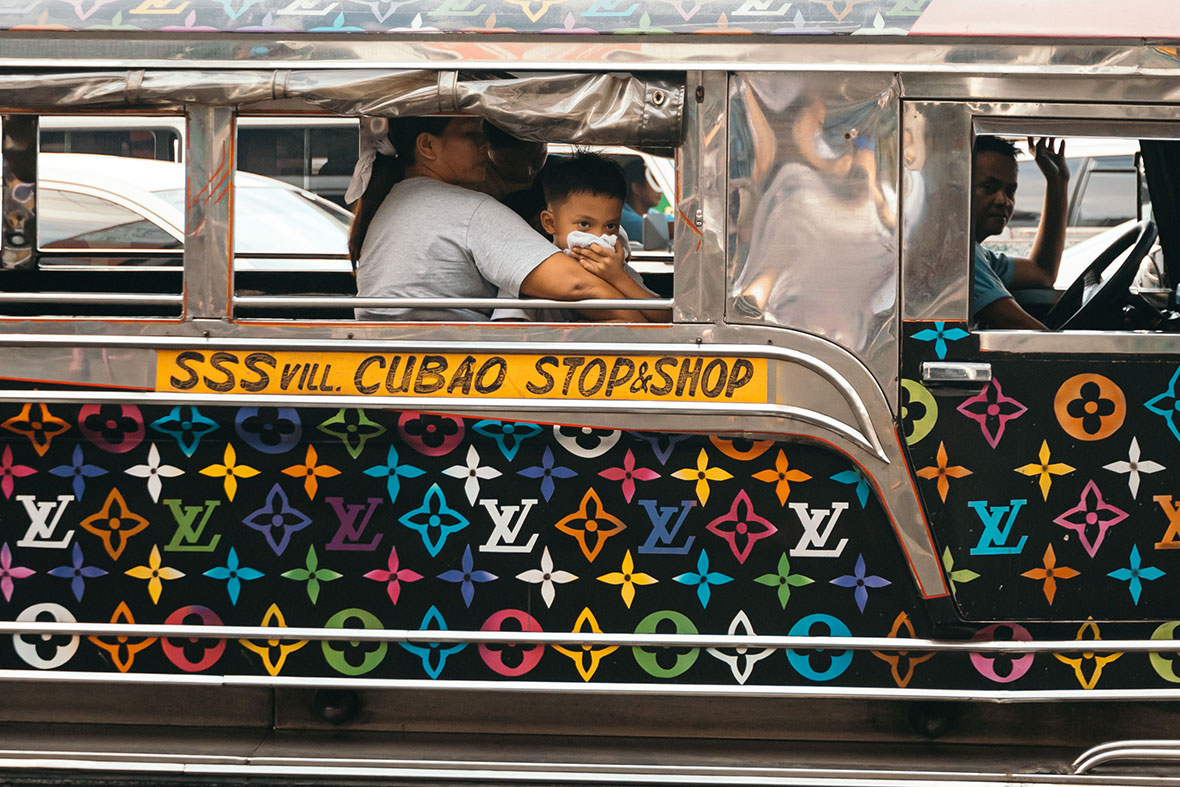 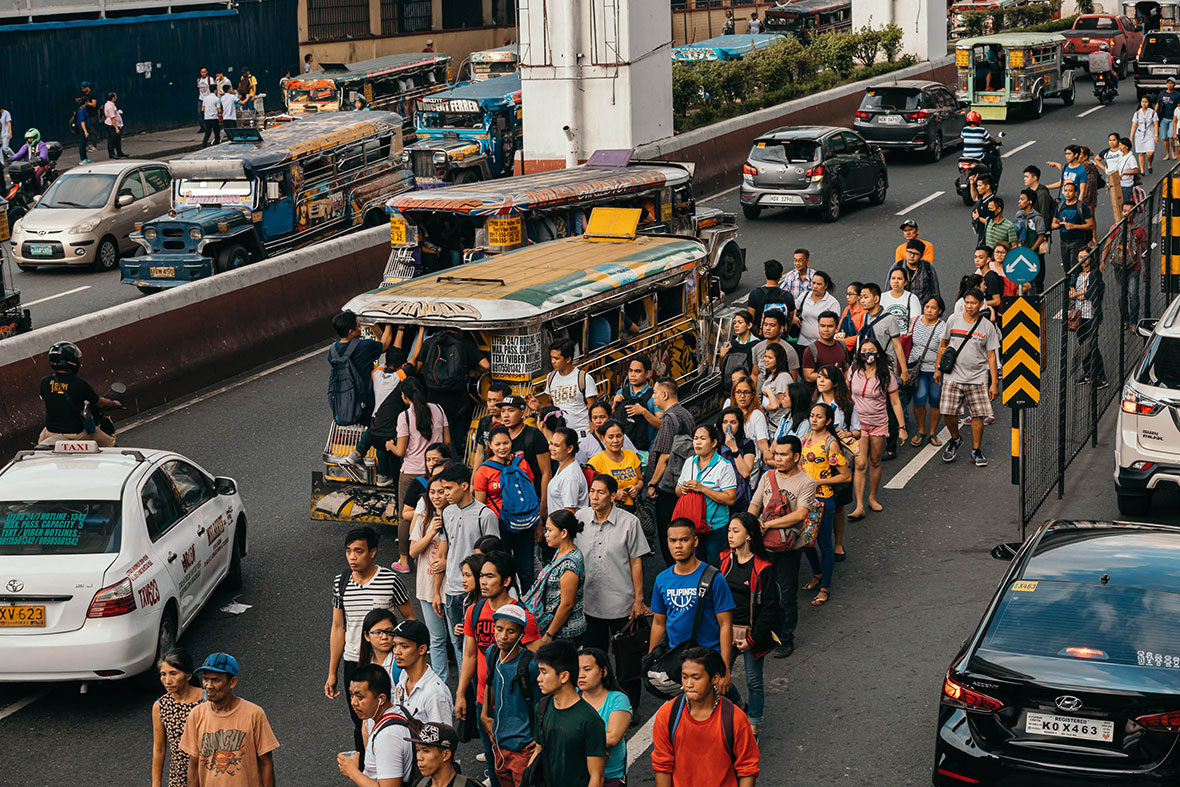 Jeepneys are best known for their gaudy bodywork, covered with a mix of pop-culture imagery, Catholic symbols, and Americana art like flags, US monuments, and more. It’s a bizarre mix that attests to the country’s history of colonization. One of the best places to spot these roving canvases is Aurora Boulevard, a major thoroughfare in Quezon City where throngs of jeepneys pass through day and night, and it’s where we first heard about Giele Nicola, one of the most revered jeepney artists in town.

The art found on Jeepneys differs a bit from area to area, but the vehicles Nicola works on and many others around Aurora feature modifications like designs cut into the mud flaps, ornate metal wiring around the brake lights, and LED lights that glow from the undercarriage and inside the cab. Back wheels are raised while the front axle is dropped low, showing off cartoonish hood ornaments and unnecessary, prolific antennas. Even the inside of the wheel wells are often painted with glow-in-the-dark paint. 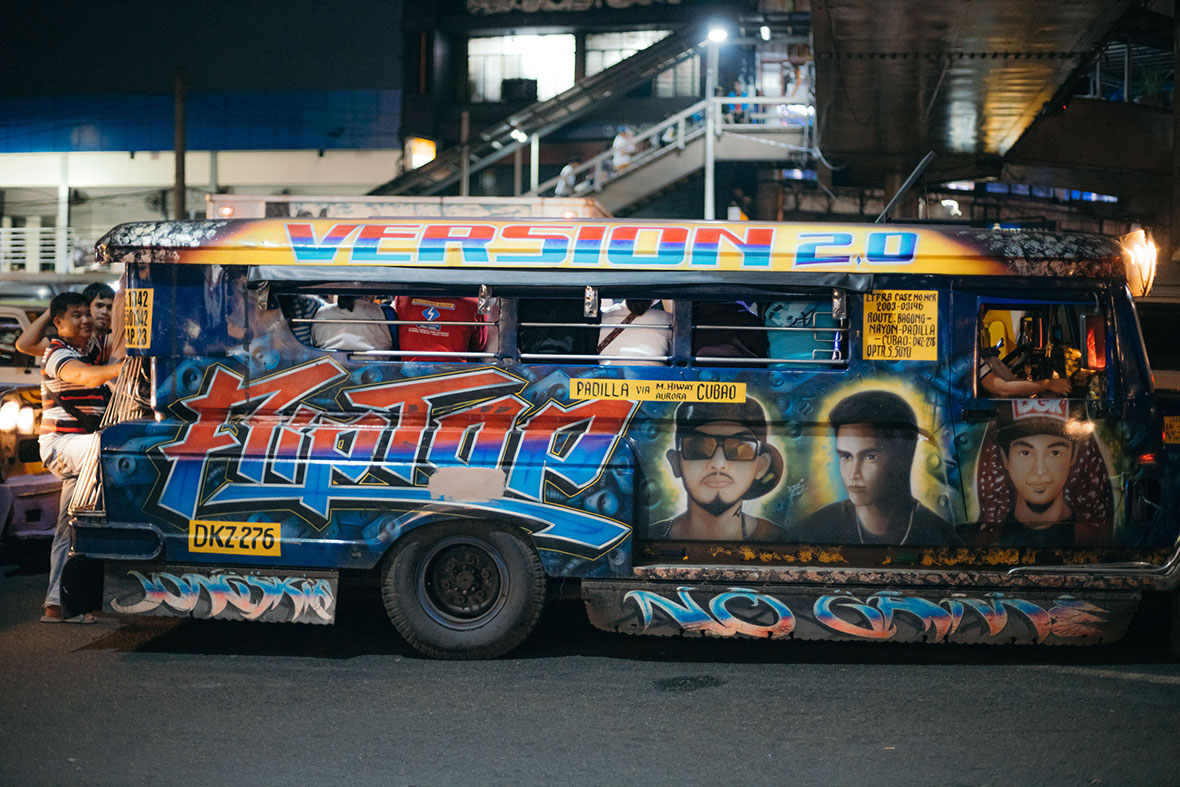 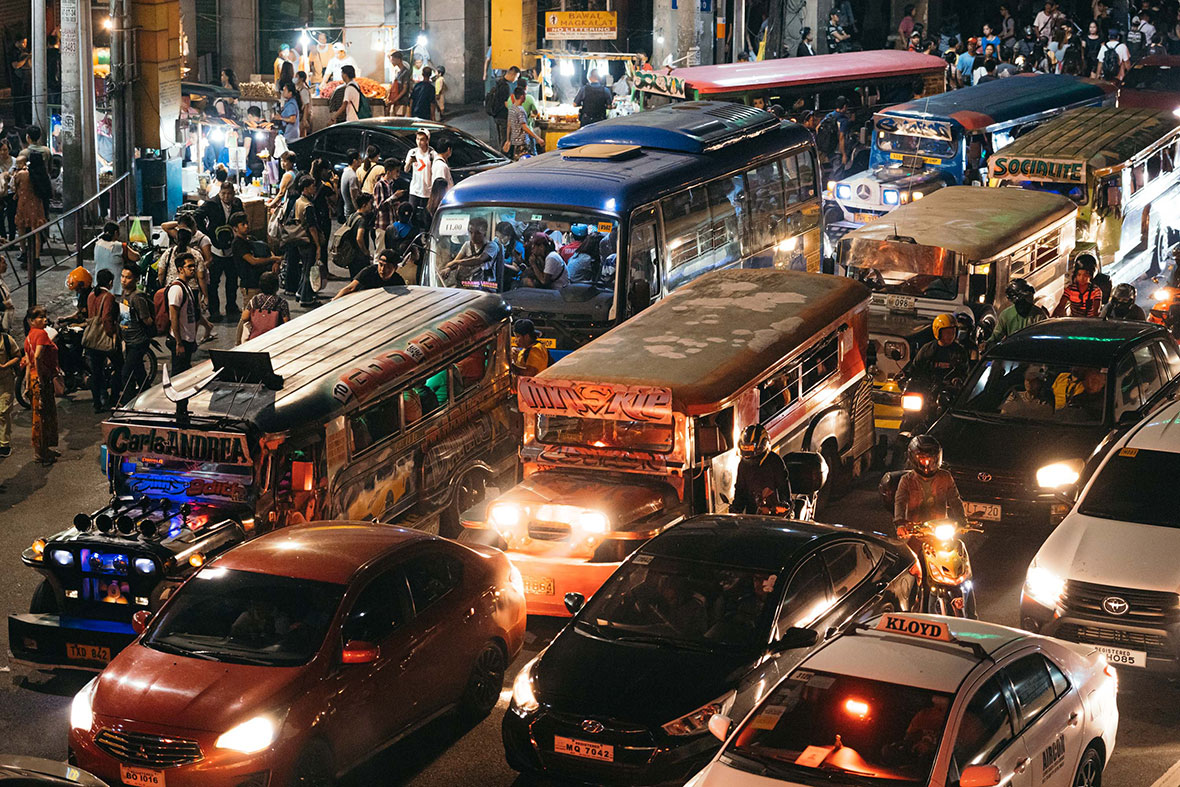 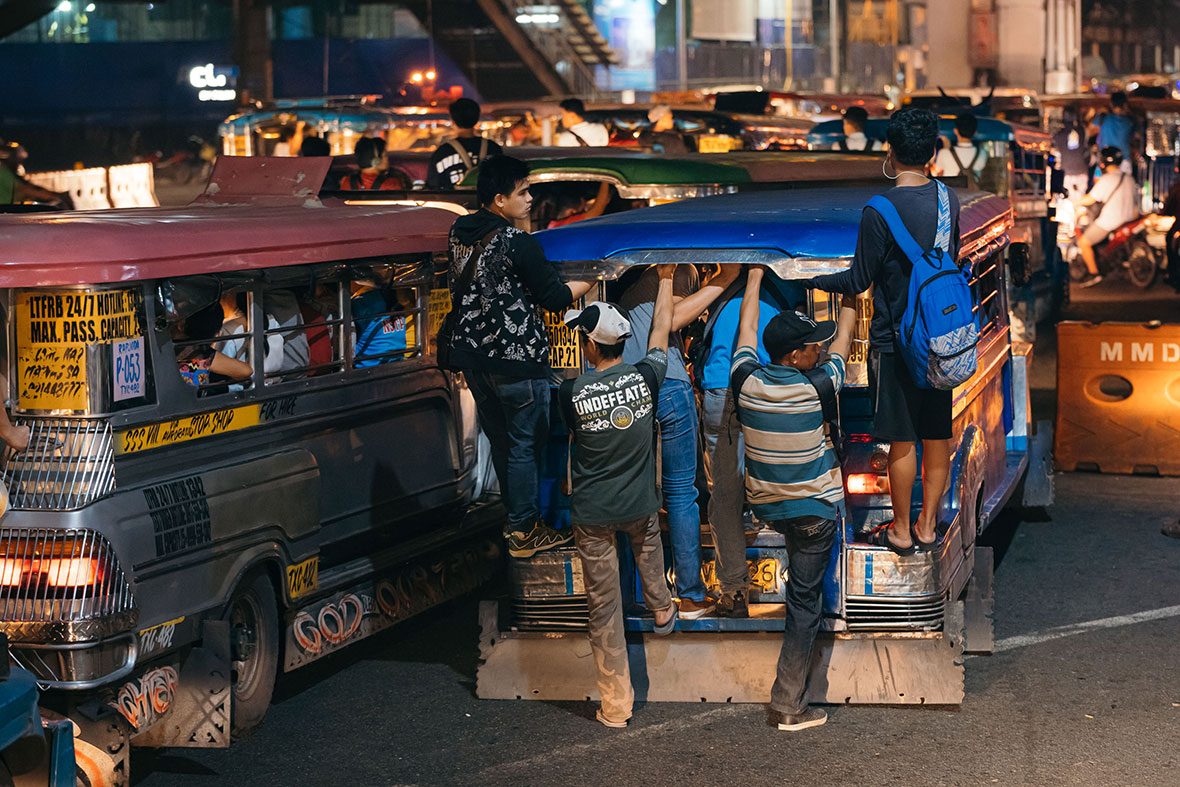 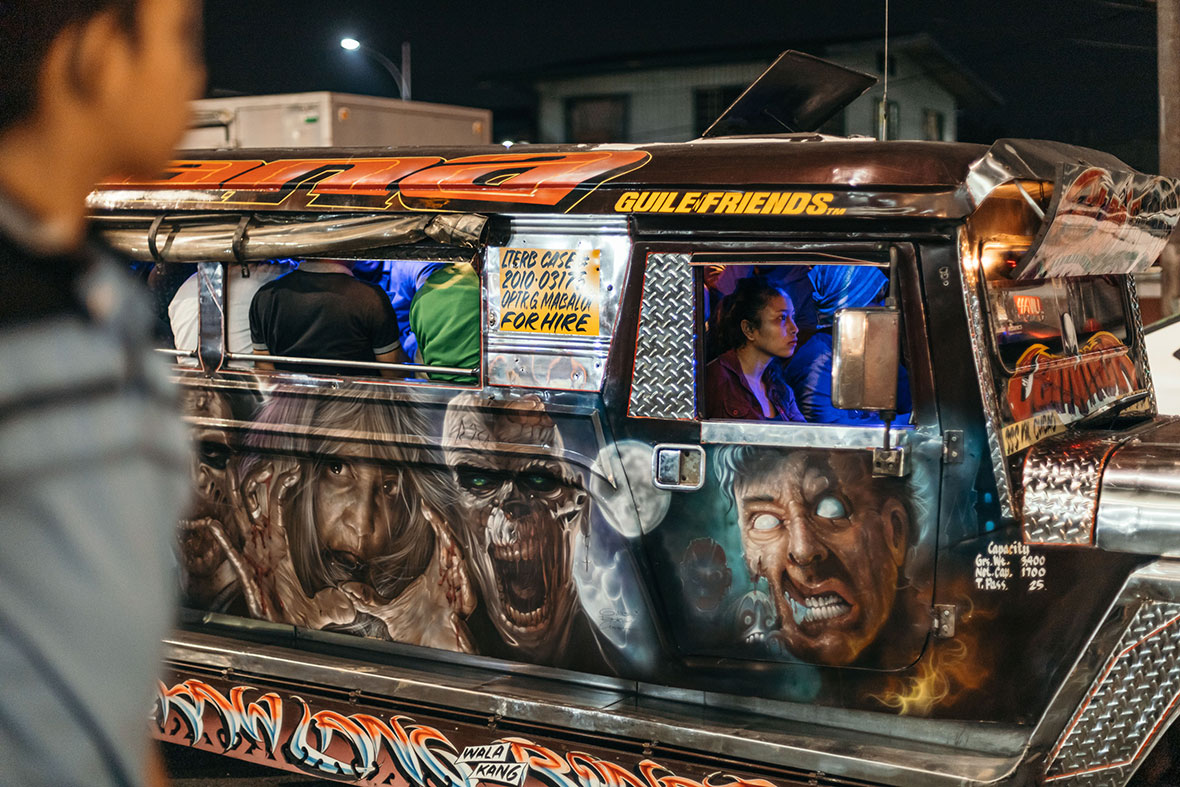 Nicola’s garage is in Marikina, on the eastern end of Aurora Boulevard, down a quiet residential backstreet where jeepneys line the sidewalks. On the day of my visit, four jeeps were crammed inside the open-air garage, as a group of men huddle under a canopy to the side. One of them is Nicola, airbrushing a portrait of Jesus on a loose side door. A compressor hose from his nozzle leads to a running engine placed on the ground, itself attached to an old car that hasn’t seen the road in years.

Nicola has been at this for 20 years now. He got his start at 19, freelancing for Morales Motors, a well-known jeepney manufacturer that operates their own body shops. But even before that, he often painted bicycles and jeepneys for fun, working freehand with a brush in the traditional jeepney one-stroke style, which is handwriting style of flat brush calligraphy. Impressed with his work, Morales brought him on board, but within a year he decided to open his own garage. “Jeepney art was on the rise back then,” he said, barely glancing up from his work. “It was a lot simpler then, and just starting to evolve. The jeepney industry was at its peak, with garages and artwork everywhere.” Over the years, he’s become known for specializing in hyper-realistic paintings. But his garage does everything, including metalwork and repairs.

Nicola opened the garage with his partner Arturo Cinco, who goes by the alias Rokba. The two met at Morales Motors when they were both still teenagers. Rokba specializes in custom decals, which he cuts out freehand and applies in layers. They can be up to six feet wide and two feet high, with a dozen different colors. “I never did any other kind of art,” he says. “Jeepney art was my passion and my hustle from the start.” 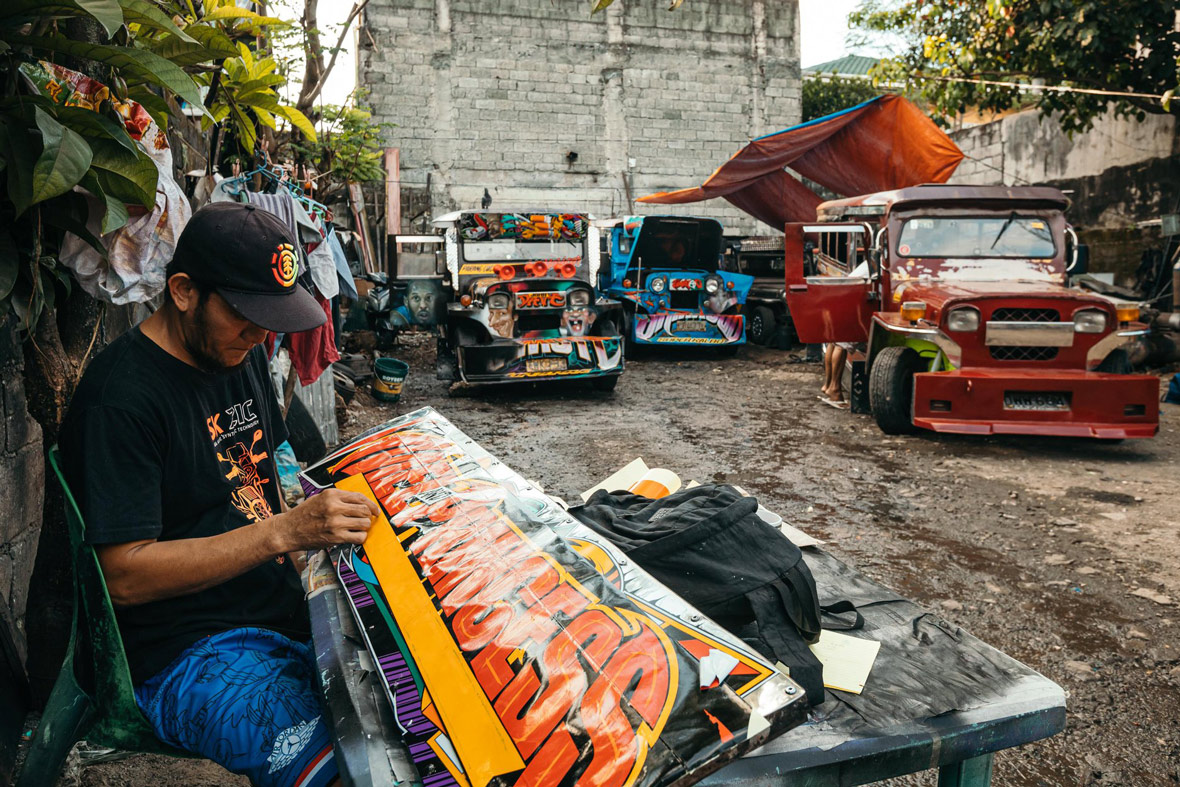 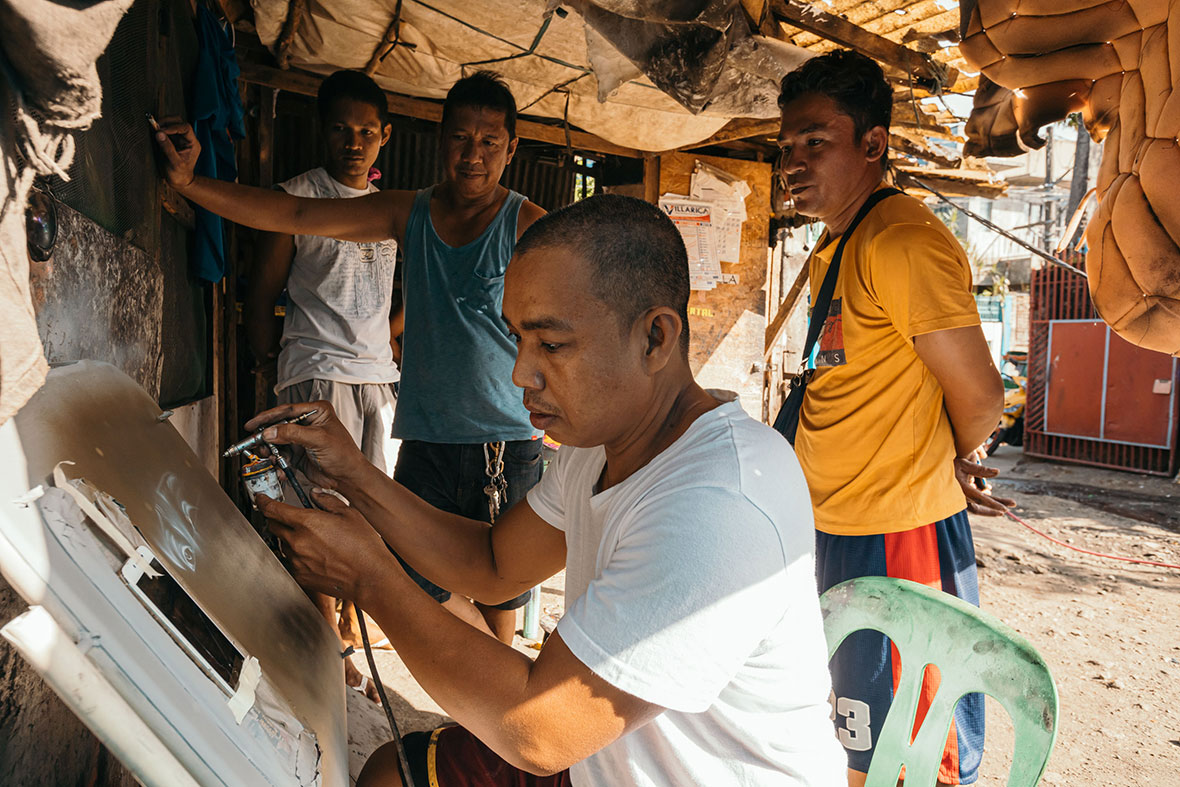 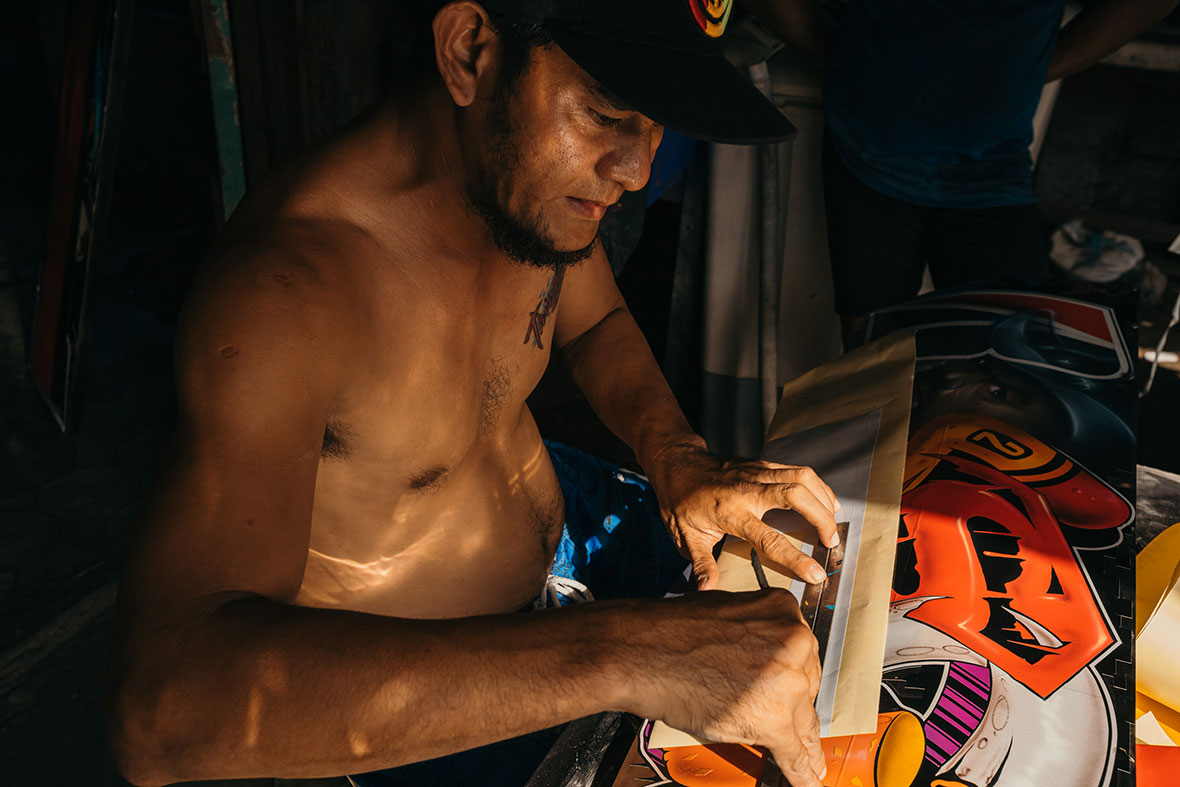 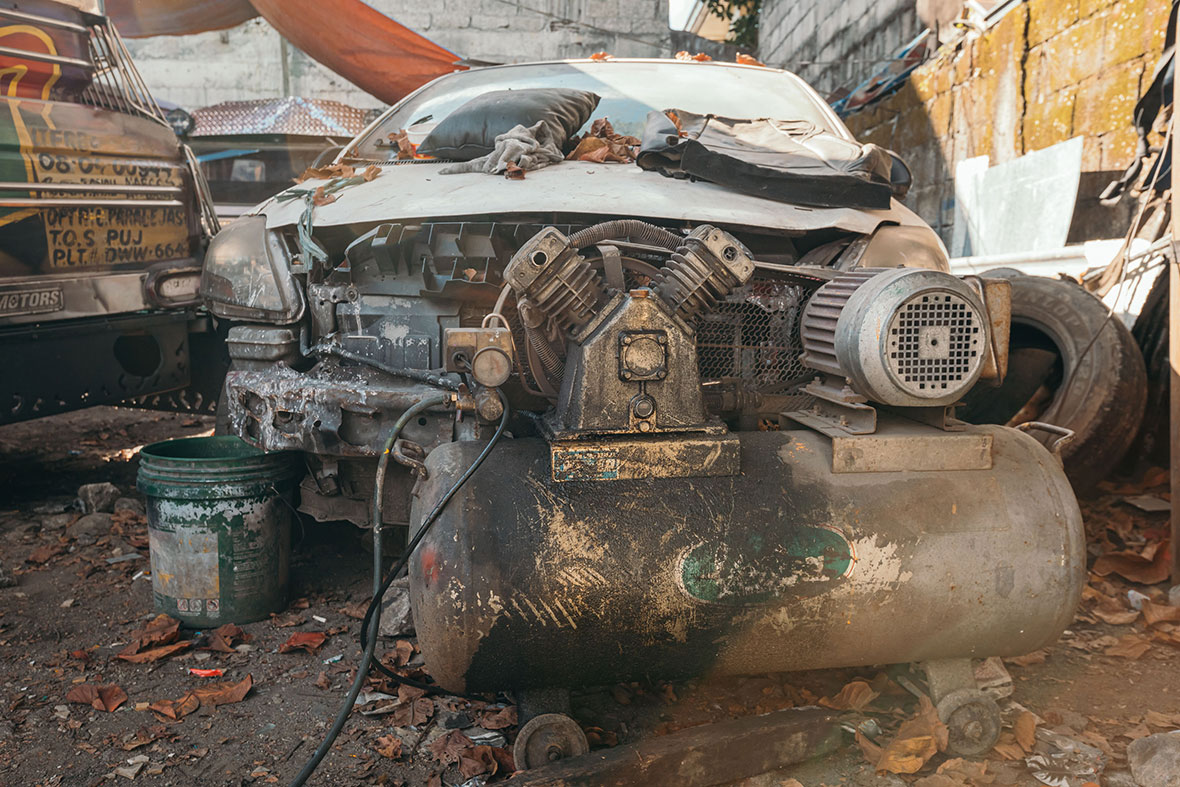 For years, business boomed. A full customization, with all the bells and whistles, costs around $4,000 and takes two weeks—a good racket, considering that it’s about what the average family makes in a year. As more garages appeared, the market became oversaturated, but business took a significant dive a couple years ago. In 2017, the government announced a modernization program that would phase out most of the classic jeepneys with newer models. (Jeepneys are classified as “public utility vehicles.”) Under the original plan, jeepneys that are 15 years or older would no longer be allowed on the street by 2020.

The new jeepneys are meant to be cleaner, safer, and more accessible for the elderly and disabled. They use modern engines that spew fewer emissions. A few different models, which resemble minibuses more than traditional jeepneys, are already running along a few routes, and they are undeniably more pleasant to ride in. Beyond improving the lives of those already dependent on jeepneys, the policy aims to attract new riders who might otherwise contribute to the daily congestion with their private vehicles. Proponents hope that cleaner vehicles, improved routes, and more accountable drivers will help ease the city’s traffic woes. 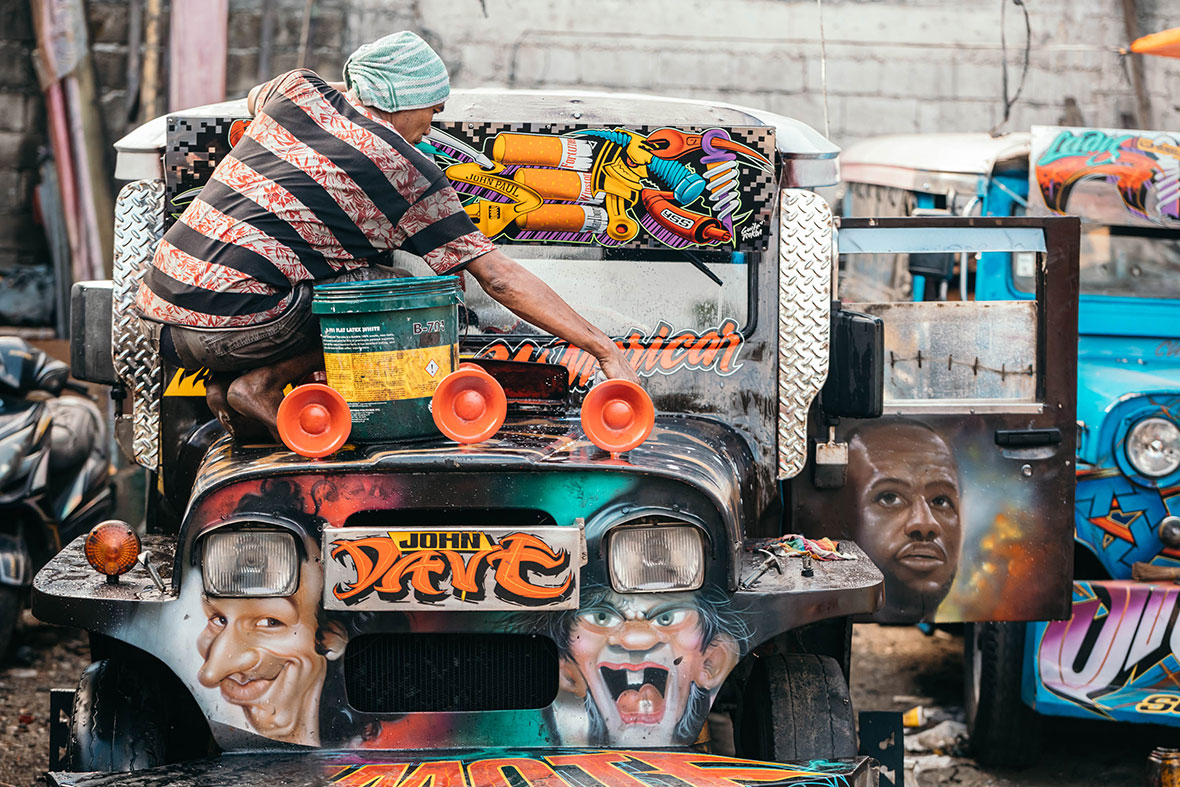 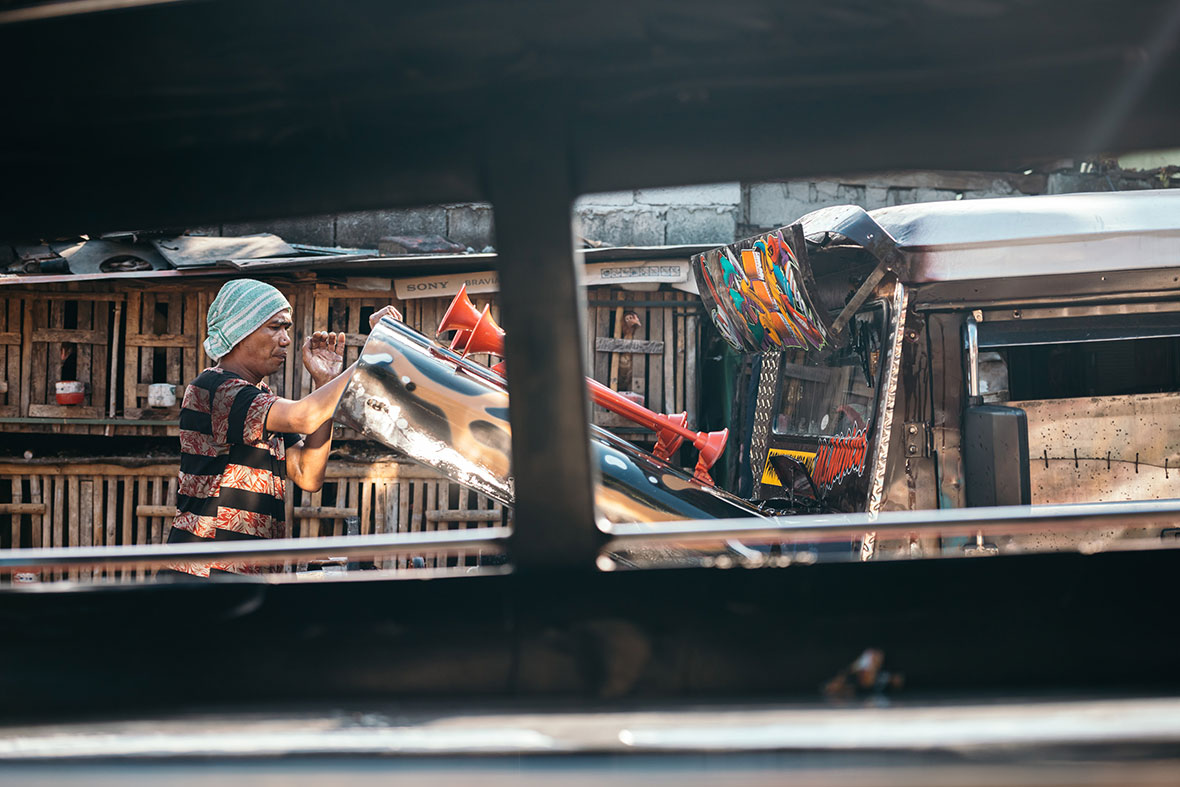 Yet the plan isn’t without its critics, and jeepney drivers have gone on multiple strikes to protest. Drivers who wish to keep their jobs were required to upgrade to one of the newer models, but so few have done so that the government has delayed the deadline for another year. Jeepneys that pass a “roadworthiness test” are given an additional year’s lease on life. It’s not difficult to see why there’s such a lack of compliance: the required costs of a new jeepney model range between $32,000 and $44,000, but most drivers only make around $10 per day. The government has developed a loan scheme to help fund the transition, but it’s restrictive and leaves many owners with no assistance. Some critics argue that for the plan to be realistic, the transportation sector would need to be state-run.

Amidst all the traffic issues, the culture and art of the jeepney are a distant afterthought and the future for artists like Nicola and Rokba is wildly uncertain now. Much of the industry that’s grown up servicing and decorating traditional jeepneys could disappear, including Nicola and Rokba’s garage. “Everyone is affected,” Nicola says. “It’s not just us. It’s the barkers who corral riders to empty seats for change. The drivers and mechanics. The garages. Everyone.”

When asked what they’ll do next, the duo’s answers offered a glimpse of their resilience and optimism: Nicola says he’ll focus on his tattoo business, which he already does now on the side. Rokba just laughs: “I’ll get some rest.”