Flexible, accessible, and strong, less a necessity than an object of desire, plastic is as seductive as it is destructive. It’s the perfect symbol for the hazards of materialism, and it’s a source of inspiration for Sun Yitian, one of China’s most intriguing artists under 30. Her paintings range from the abstract to the hyper-realistic, and always bring together the tacky, the humorous, and the ironic. 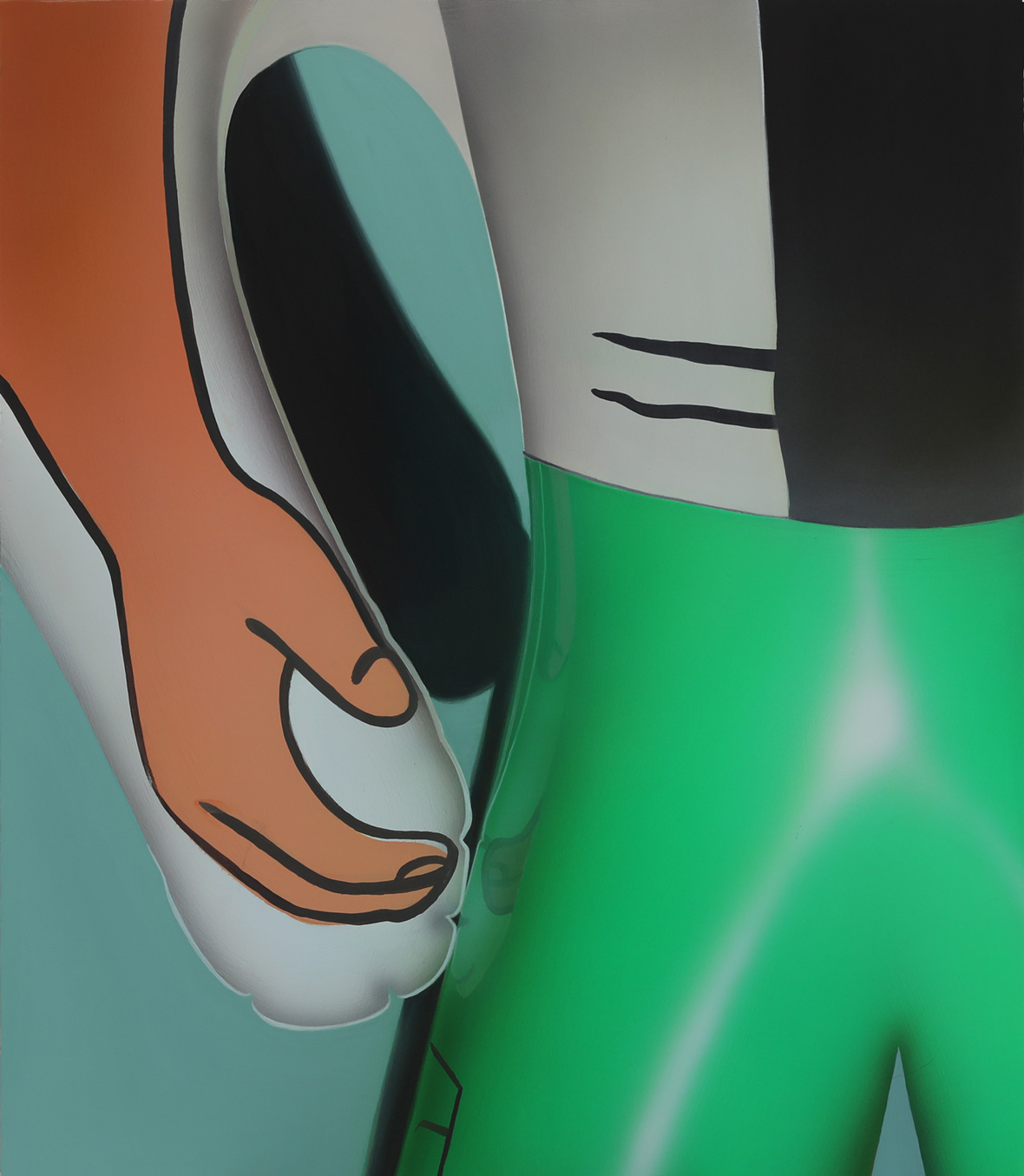 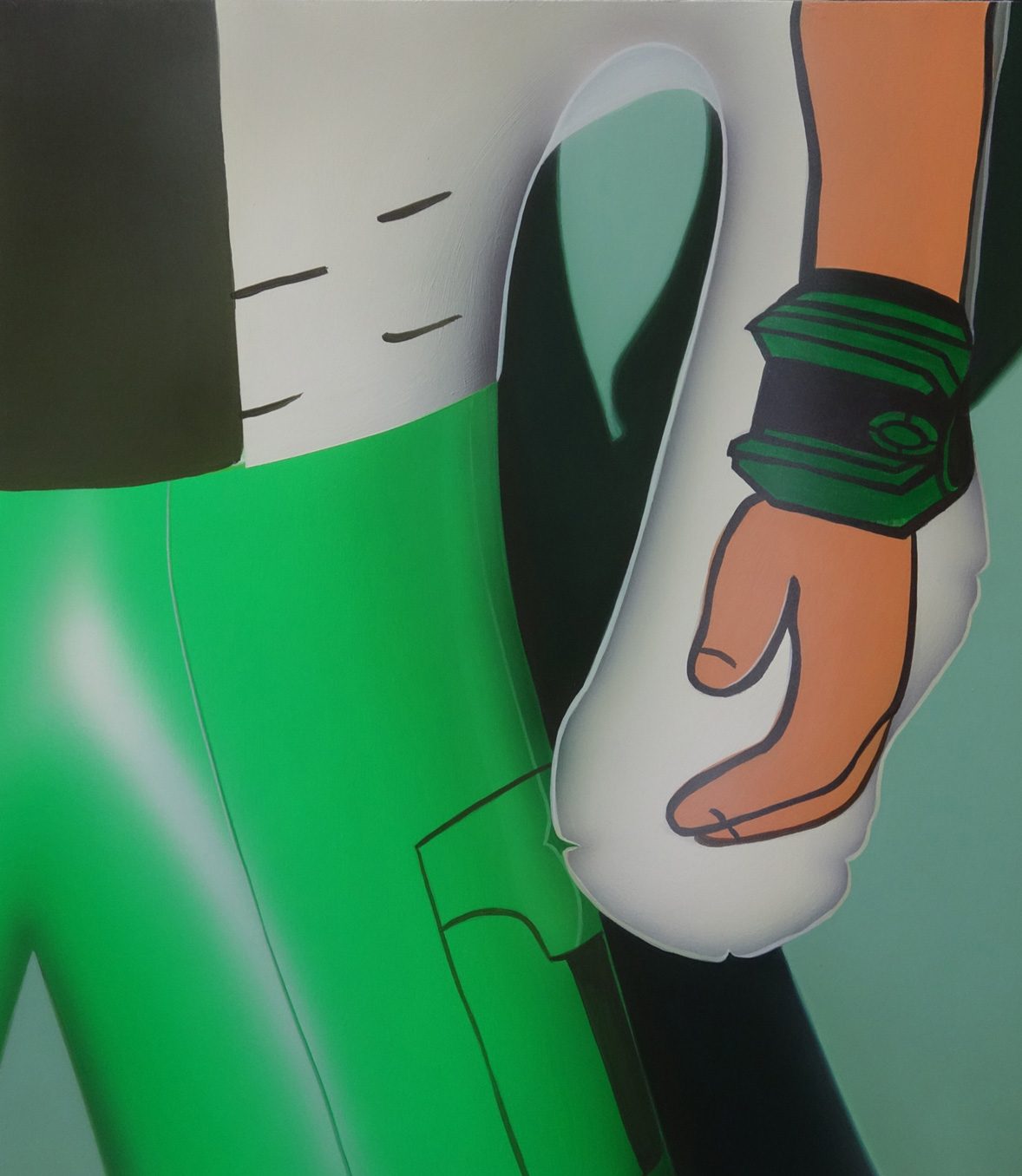 Sun grew up as an only child in Wenzhou, a place where you can find anything you can imagine, from luxury goods to lousy knock-offs. Consumer products gave her lively imagination something to play with, as did busy streets, flashy billboards, and loud TV shows.

Her artistic epiphany came at a young age. “When I was five, I drew a princess on my handbook,” she remembers. “I left a star-shaped space on her skirt and glued the drawing to the window. The sunlight shone through it, causing a shiny effect on the skirt. My classmates thought it was amazing. That’s when I fell into the trap of art.”

At age 15, Sun moved to Beijing to study at the high school affiliated with the Central Academy of Fine Arts. “I felt like a shrimp going into a vast ocean,” she says. “Everyone was into art, literature, philosophy.” It was this environment that prompted her to cast a critical eye at everything around her, and she began to see human creations as low-quality versions of the natural world. In fact, her subject matter can be understood as the intersection of these two lines: the natural and the artificial. She often depicts elements of nature, but in their most artificial form, playing with loud colors and textures. 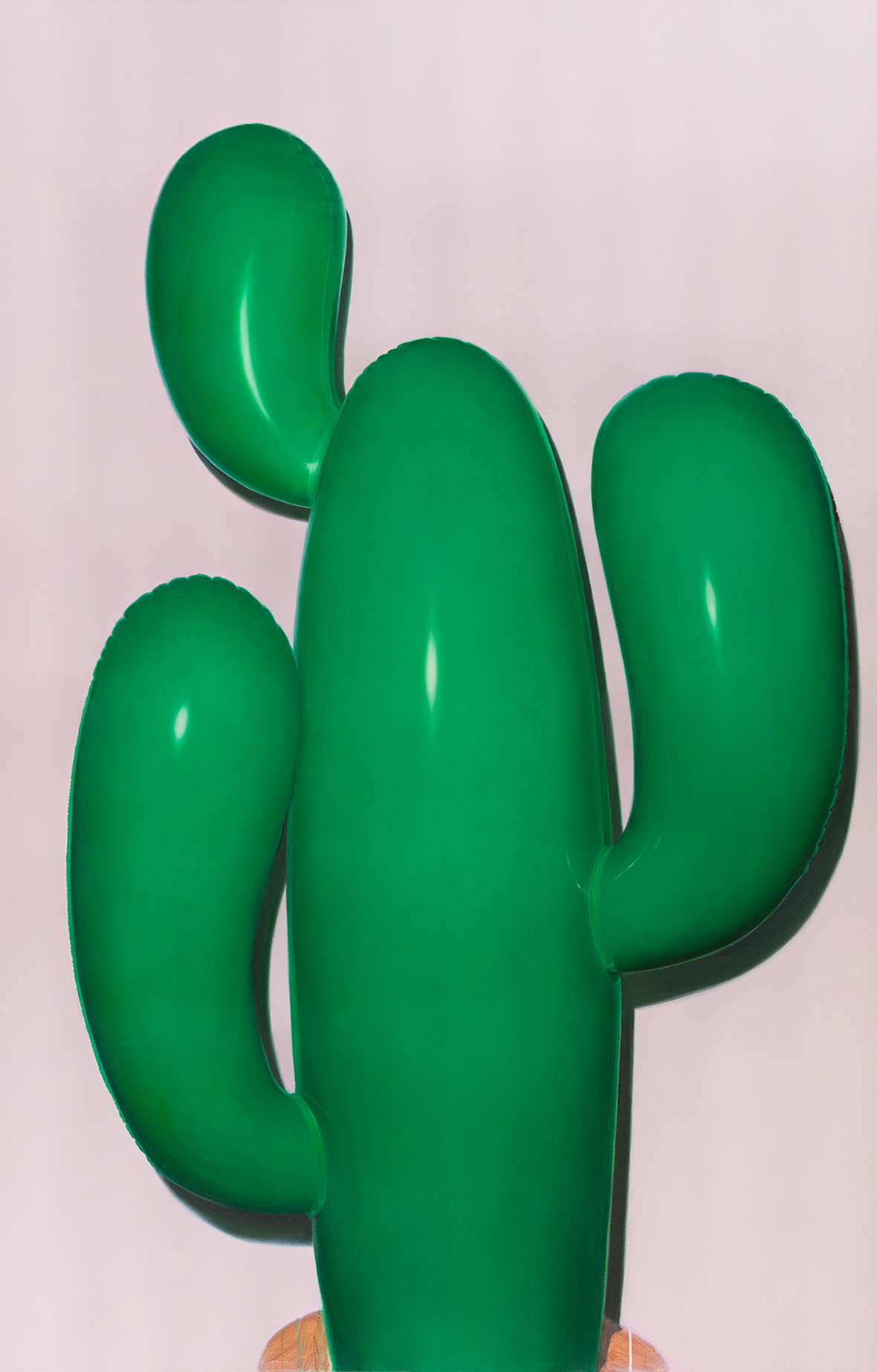 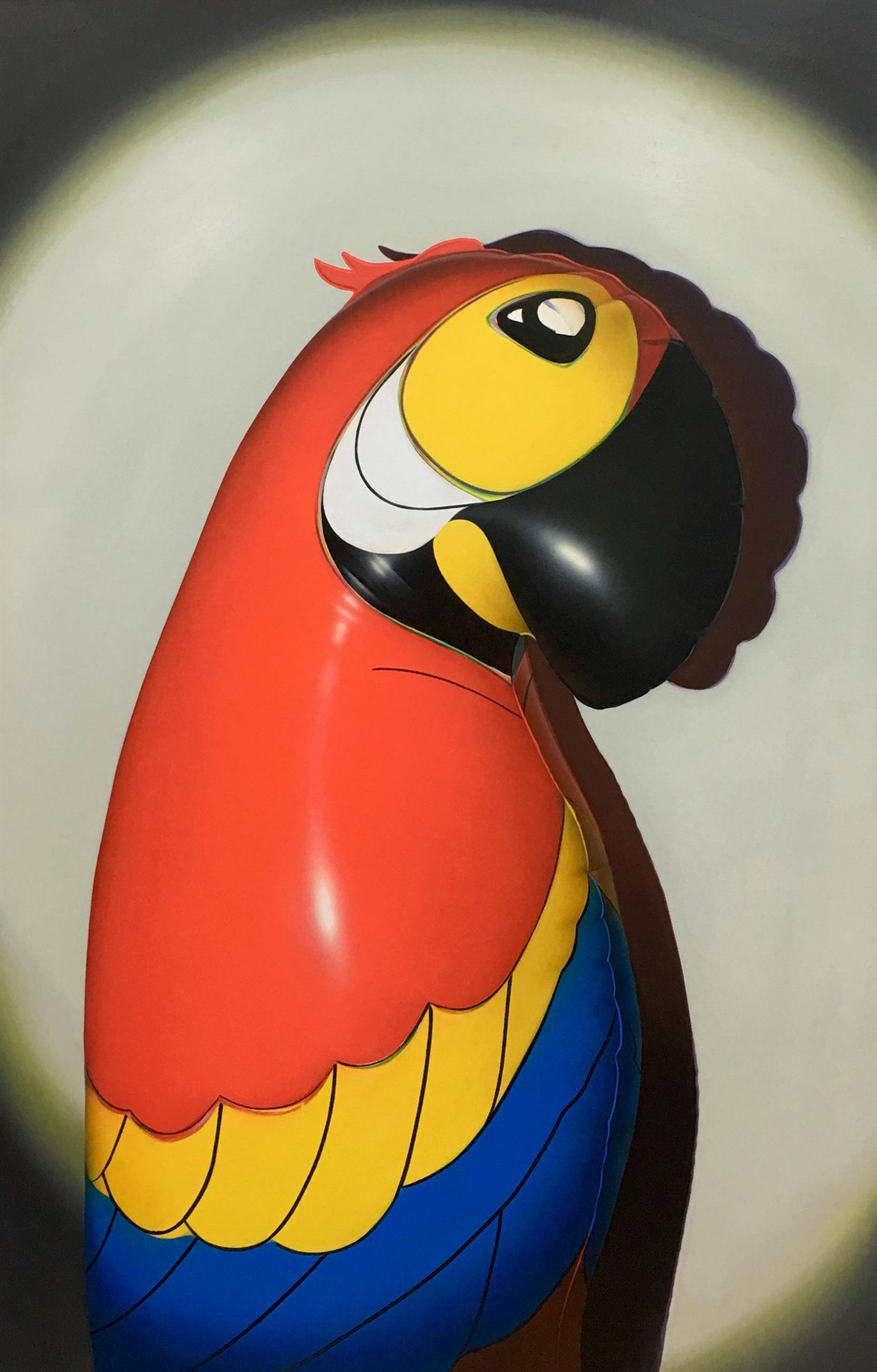 In her latest series, A Twinkle, Sun represents a type of man-made reproduction of nature that’s plastic in both the literal and the metaphorical sense: she paints all kinds of blow-up toys, ranging from goofy animals to human figures. Cheap inflatable products like T-rex costumes and flamingo pool floats are often treasured ironically by millennials. Her paintings are a nod both to contemporary attitudes and to older traditions of pop art and photorealism. 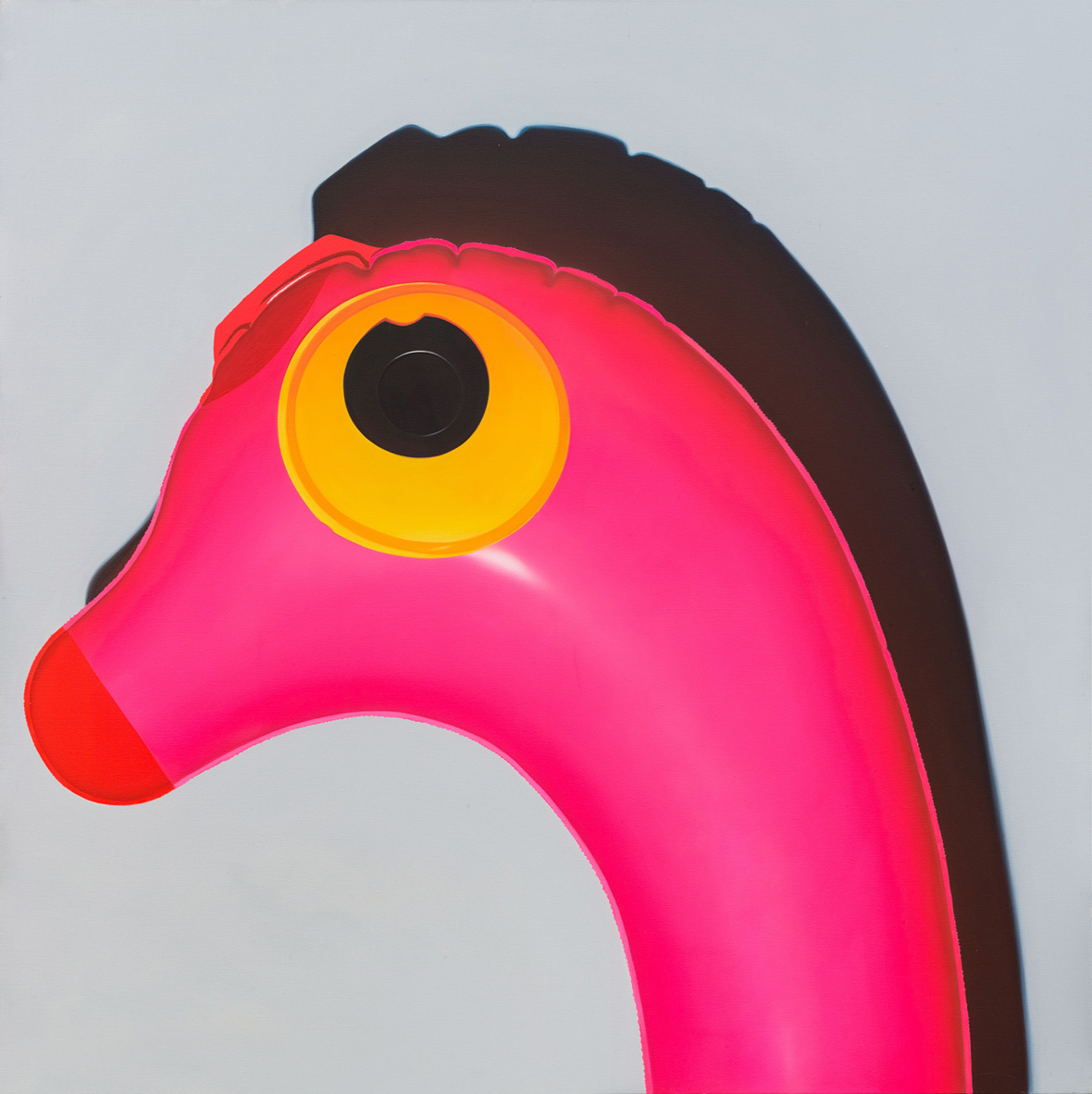 One of the most remarkable pieces is the large portrait Pink Dinosaur with Blue Wings, which combines colors to striking effect. The pink hue violently dominates the canvas, dissolving from bright ruby to pastel and shaping the object according to light’s reflection. The dinosaur’s nose and horn are simply marked by an abrupt color change to red. Sun gives the animal a perfectly rounded eye, depriving it of any realistic expression. 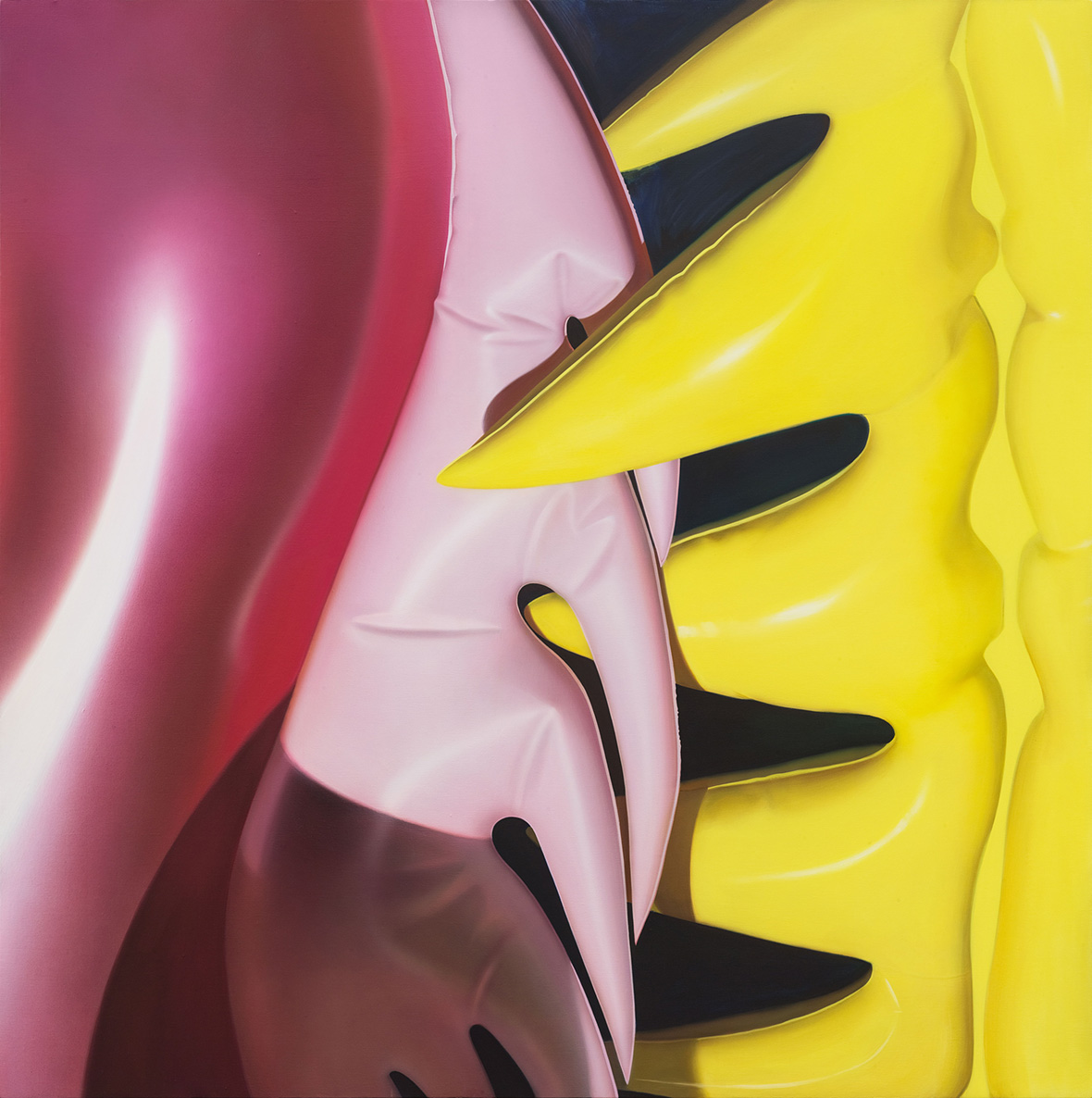 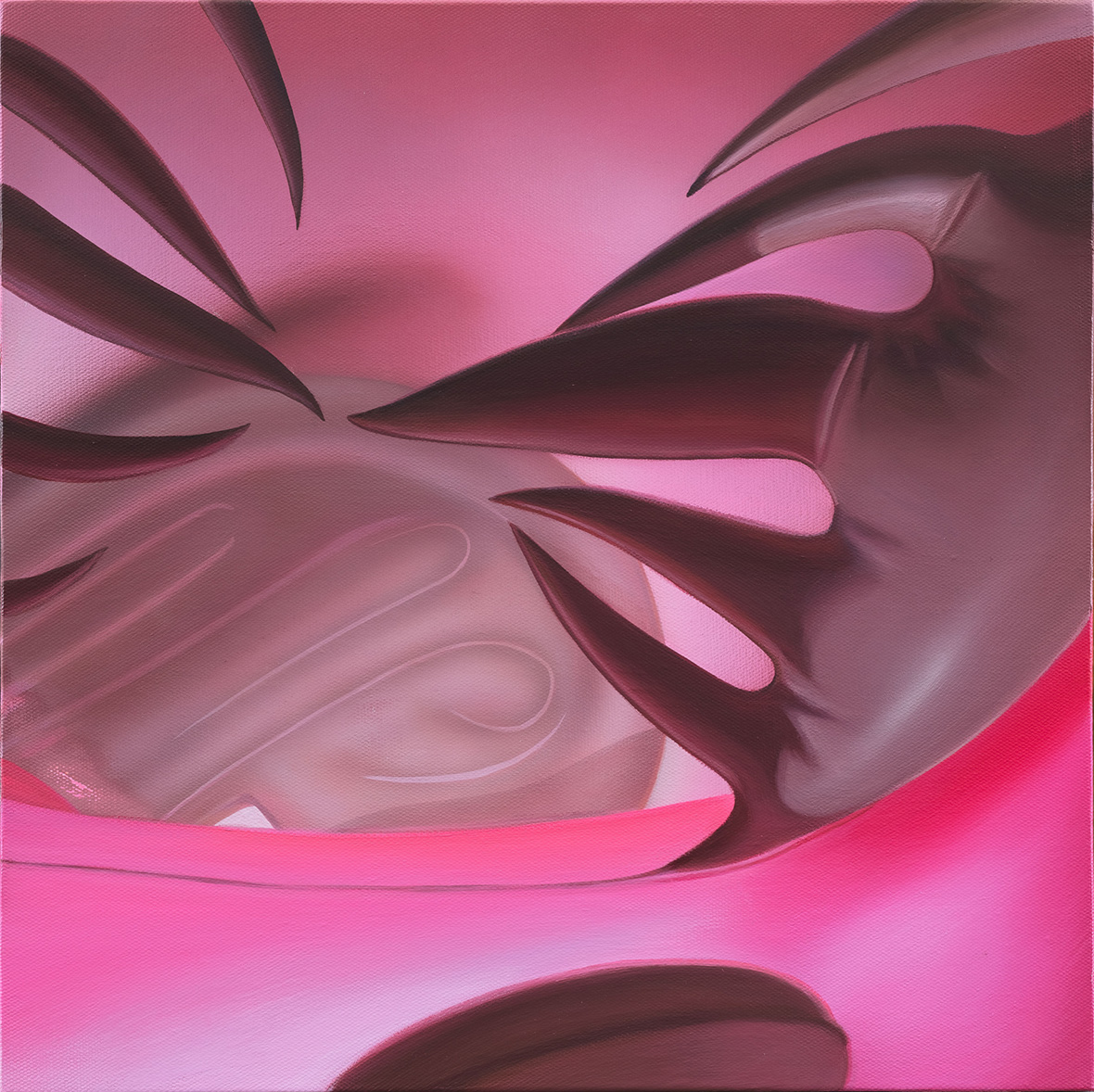 Another notable painting is Spikes, a close-up on the spiky parts of two different inflatable toys, one pink and one yellow. What’s fascinating about this piece is the way Sun explores the qualities of the material she’s depicting, giving the viewer a tactile sensation of the opaque, smooth surface of the toy. You almost think you can squeeze it to feel how fully it’s inflated.

In all her pieces, the wrinkles and seams on the plastic surface are visible, as are the little imperfections typical of mass-production. The objects have shiny surfaces and deep shadows behind them, details which add a hyper-realistic touch. Only upon close examination does the viewer realize that they are in fact acrylic paintings. To achieve this result, Sun buys the inflatable toys on Taobao, sets up a proper studio and photographs them from multiple angles. Based on these pictures she starts the long painting process. 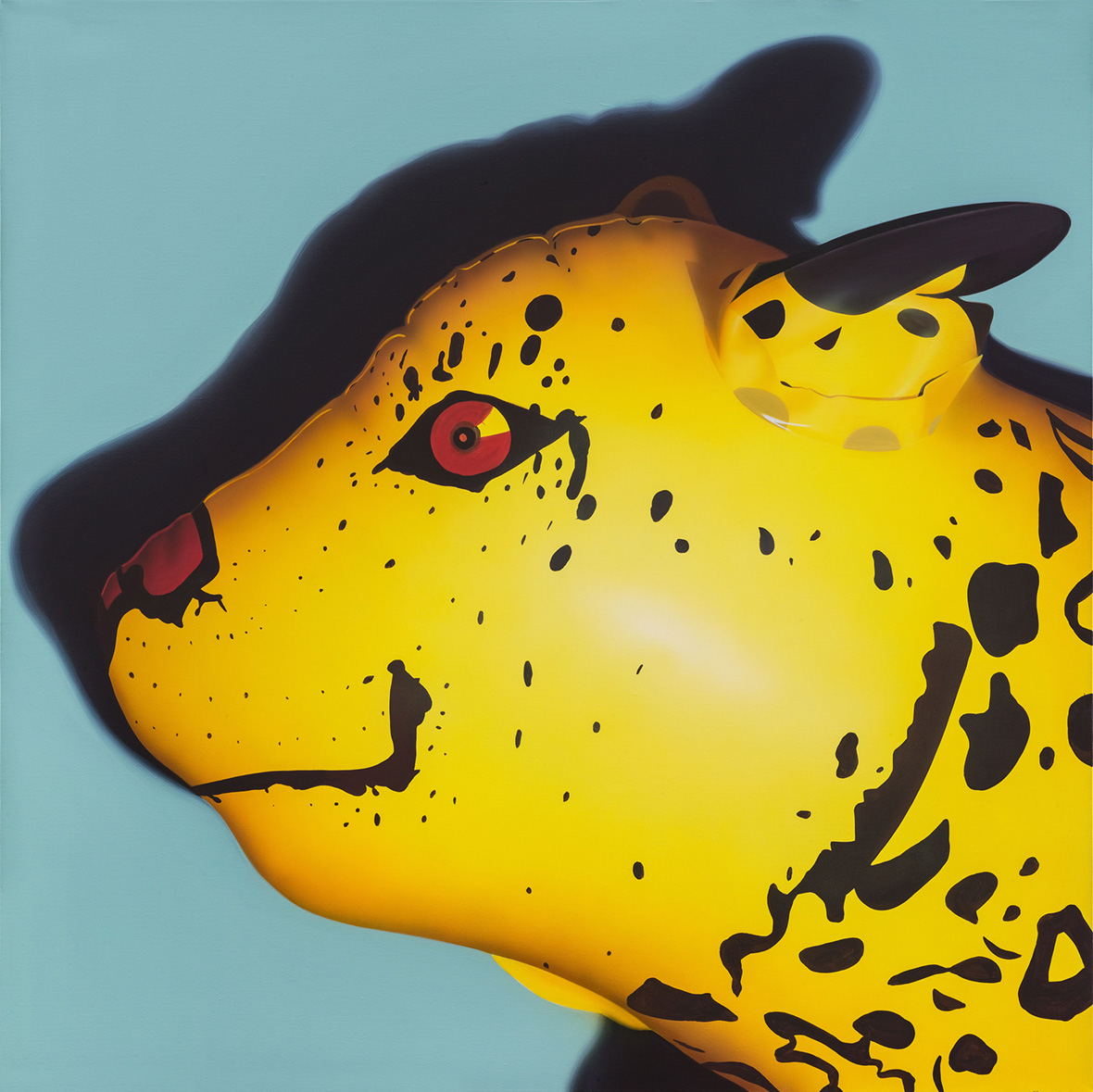 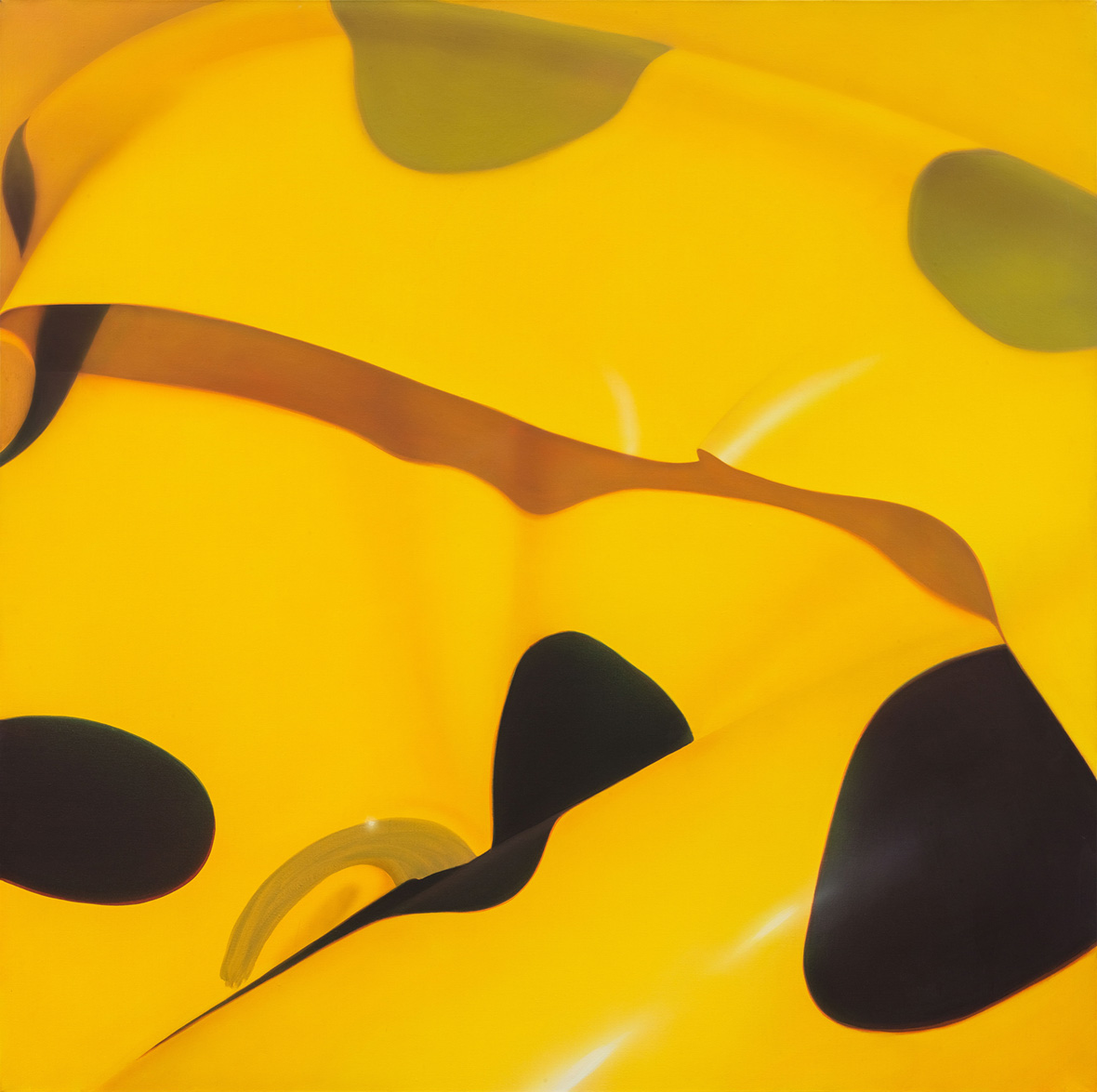 The paintings indeed look like works of photorealism, but Sun maintains that they’re merely the product of her detached perspective: “I don’t think my works are in the realm of photo-realism. I just want to observe things objectively and from a higher ground,” she says.

The same series complements these representational works with an array of abstract compositions—geometrical shapes or simple color gradings, studies in the manipulation of light and form. That manipulation is the basis of her technique. 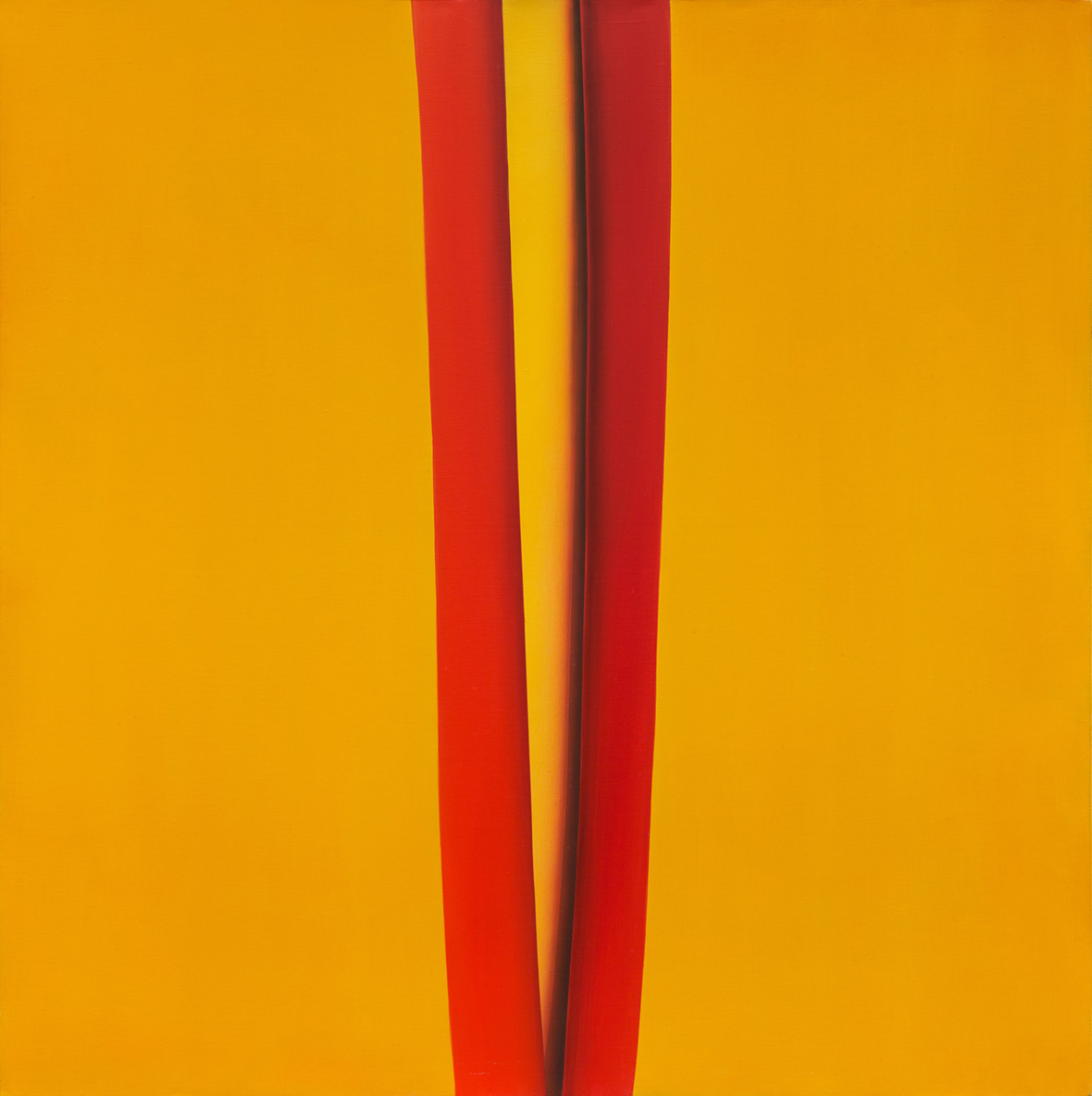 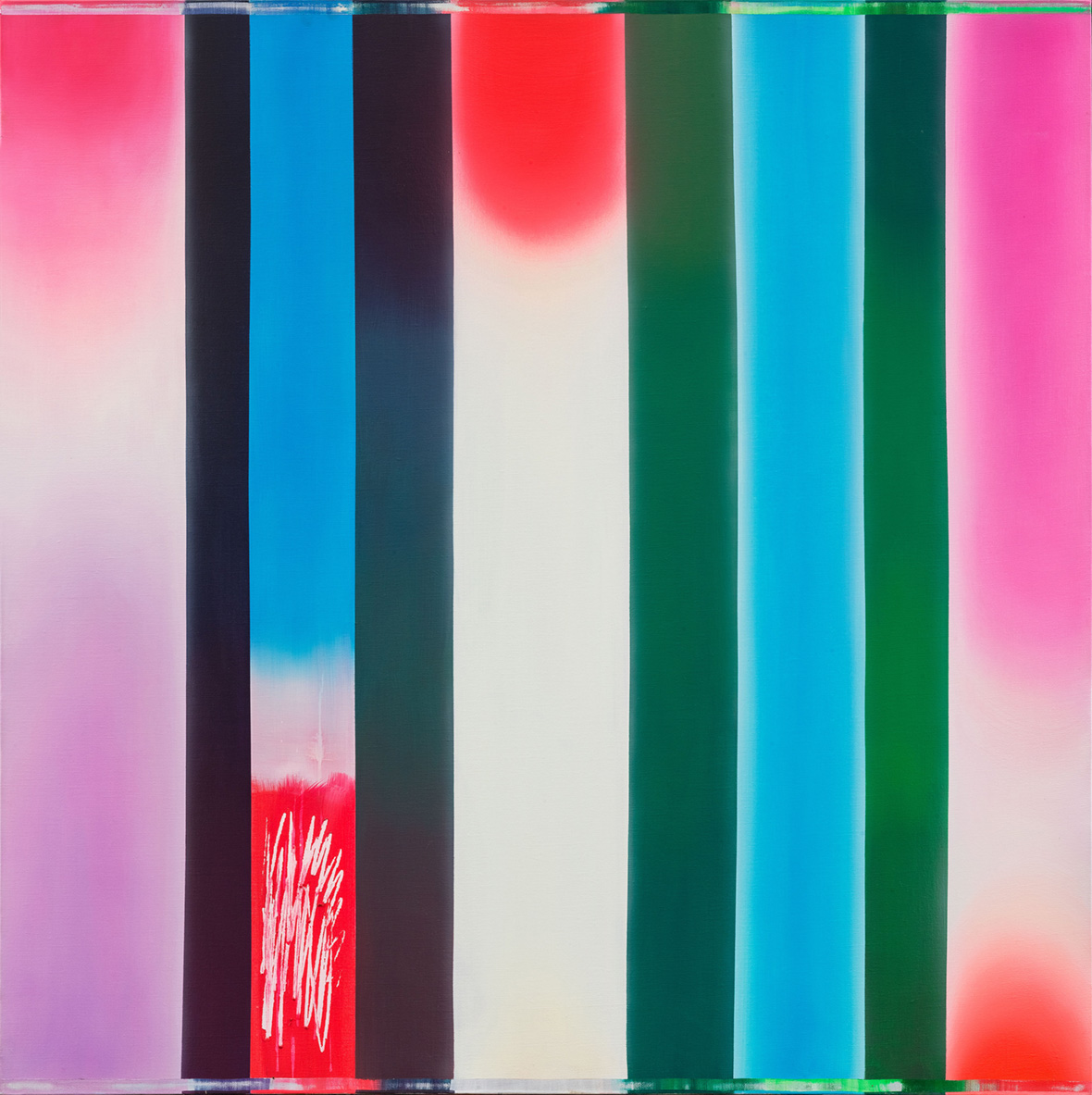 Despite her youth, Sun’s works show a remarkable confidence, and her paintings have been exhibited extensively both nationally and internationally. A Twinkle was a breakthrough for the artist, as the series connects twentieth-century trends to contemporary cultural contexts. In her precise hands, these cheerfully disposable toys take on a haunting permanence.