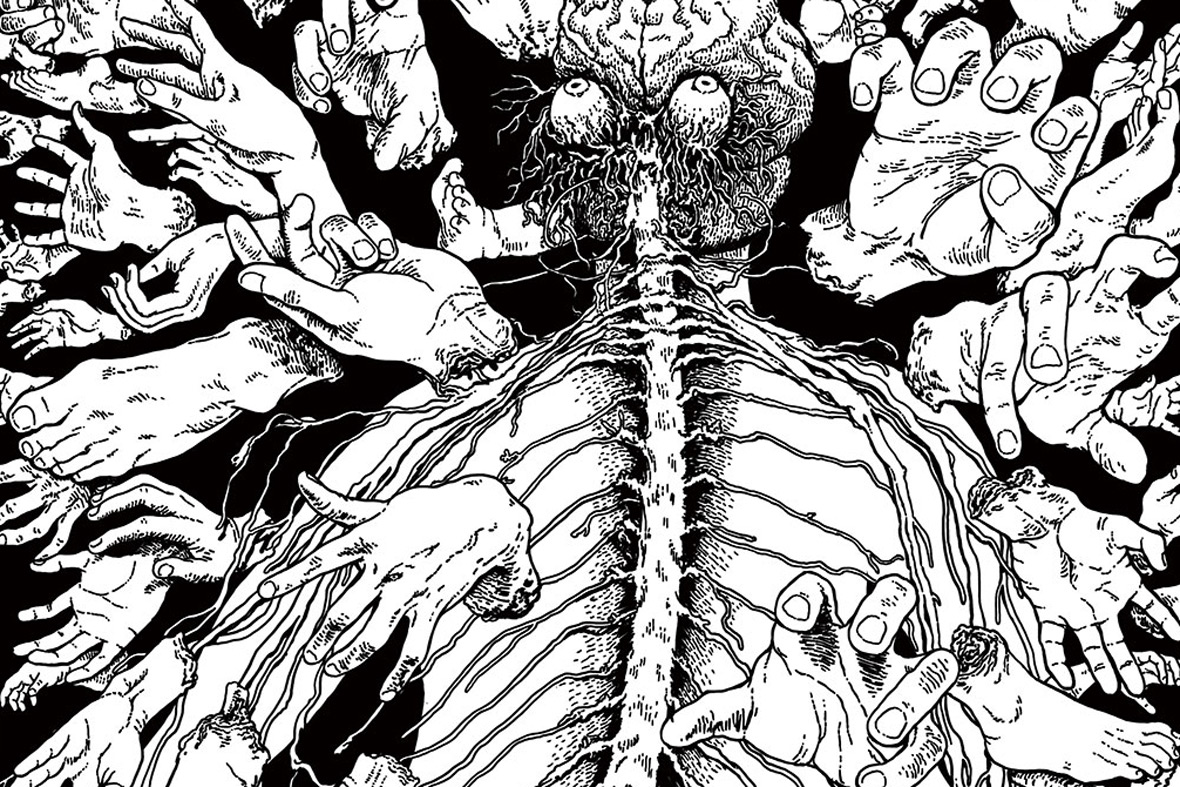 Monsters assembled from the severed limbs of its victims, humans riding flying cats, and planet-eating entities. These are the types of characters that inhabit the mind of Taiwanese comic artist Huang Liang-Chun, better known by his alias Karmarket. He’s an artist unafraid to explore the deep recesses of his mind, those dark corners of horror we usually strive to avoid. But he consciously gives his stories emotional breadth and meaningful depth. It’s also frequently infused with his own signature brand of humor. 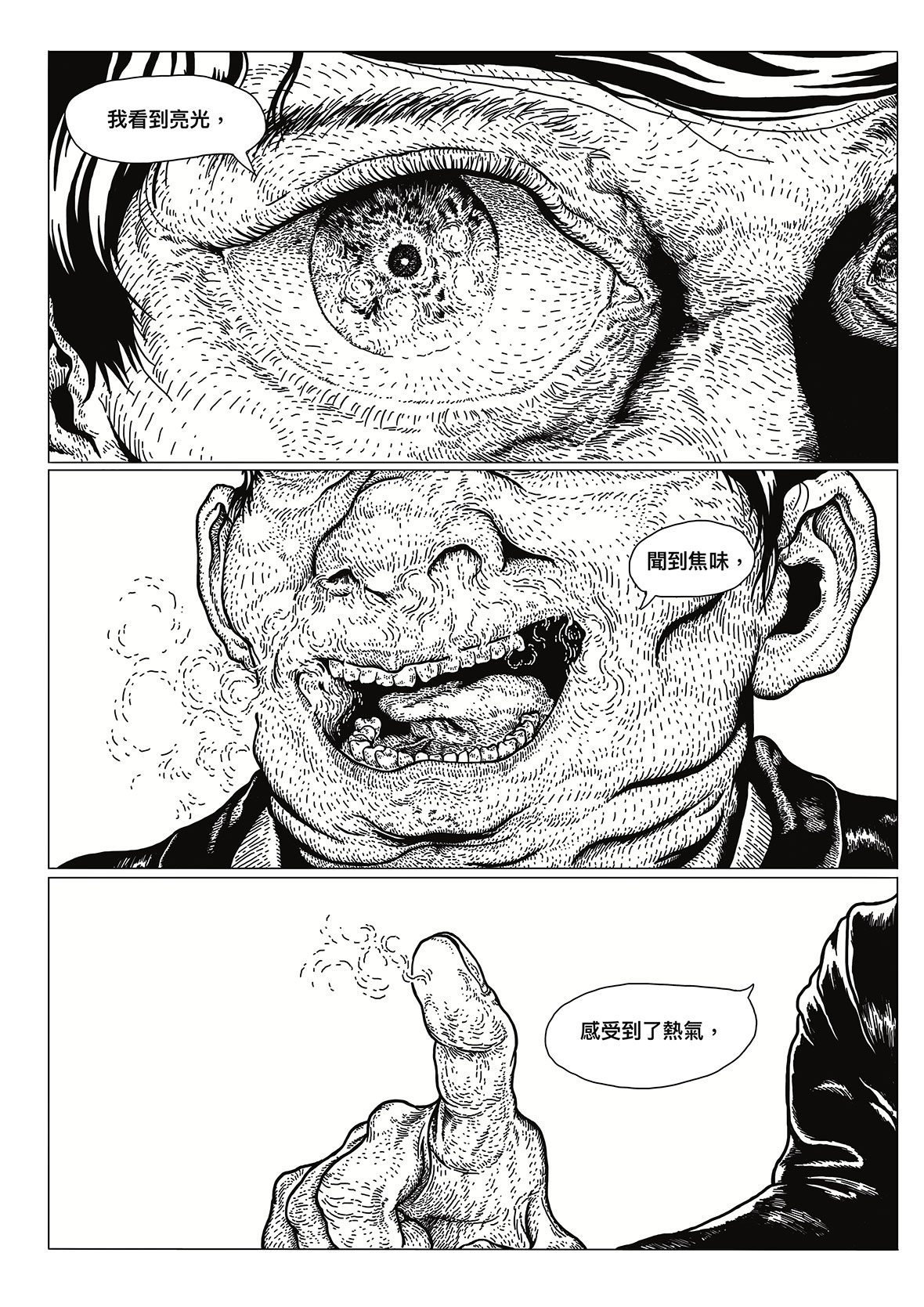 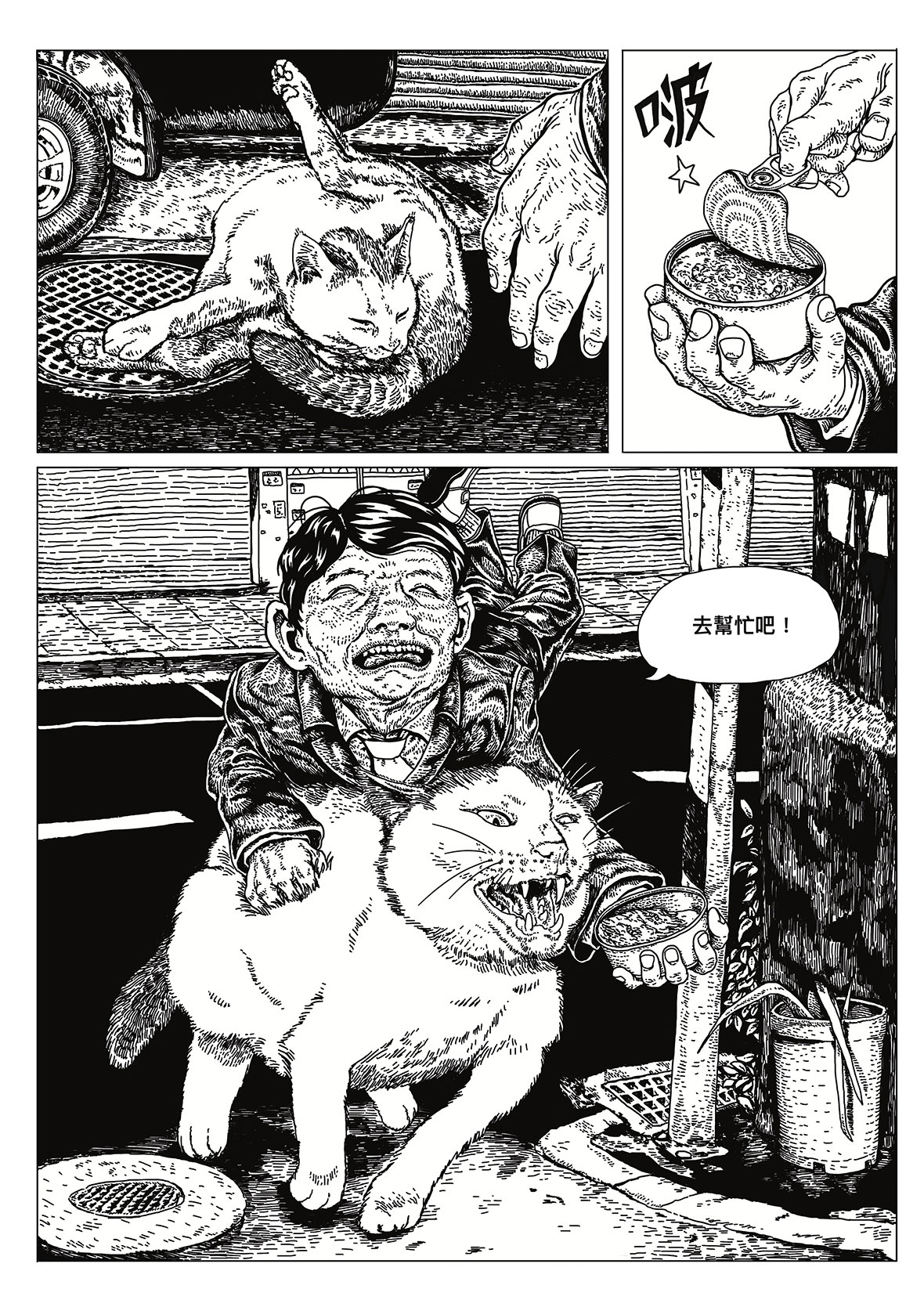 Huang writes and draws all his comics, drawing inspiration from dreams and daydreams alike. His first comic, “Somewhere On Fire,” was inspired by photos he took of local street food vendors. It started as three standalone illustrations, but due to the inspiration of a surreal Japanese manga, he developed a full comic out of the scenes. It became an outlandish story about a man who sees smoke in the distance and jumps onto a flying cat to go to the rescue, only to discover the smoke is actually just steam from a restaurant. So instead, he just sits down and orders food.

“It doesn’t really have a clear plot or make much sense,” Huang laughs.” “I wanted to draw people eating street food and it grew into this.” At the end of the comic, news of a real fire is broadcast on television and the hero looks on, depressed. It’s a helplessness that mirrors Huang’s own feelings when watching the news. 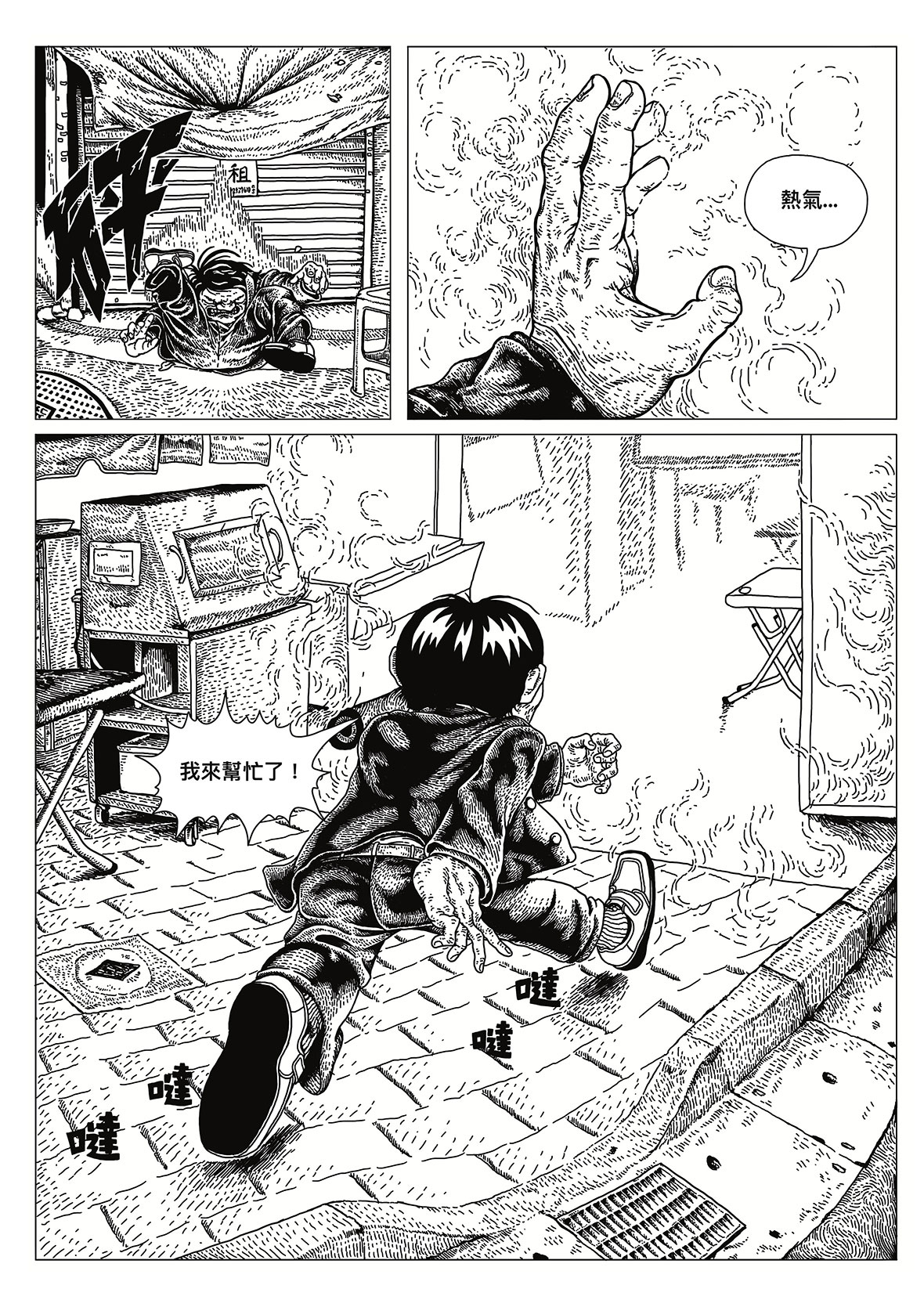 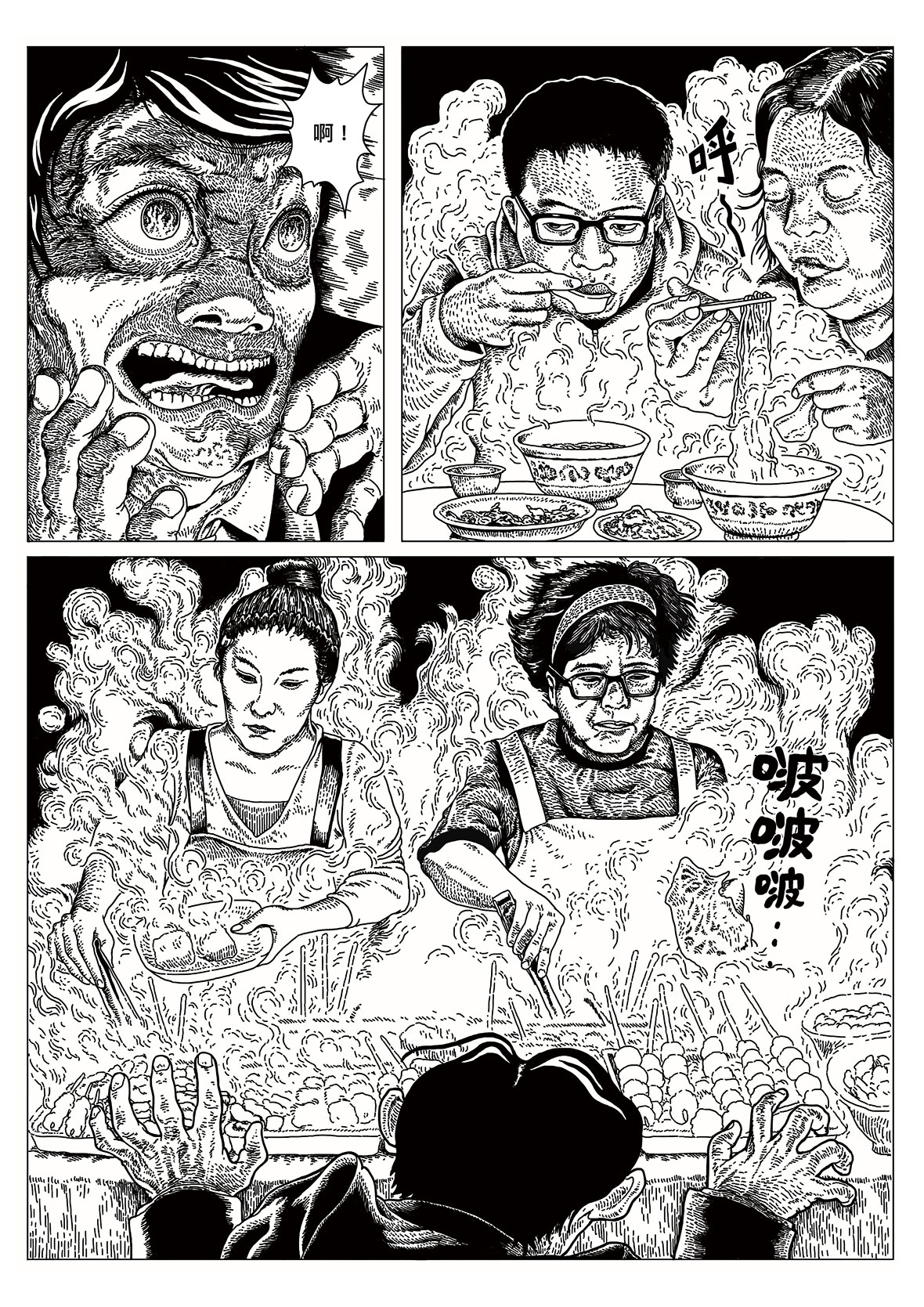 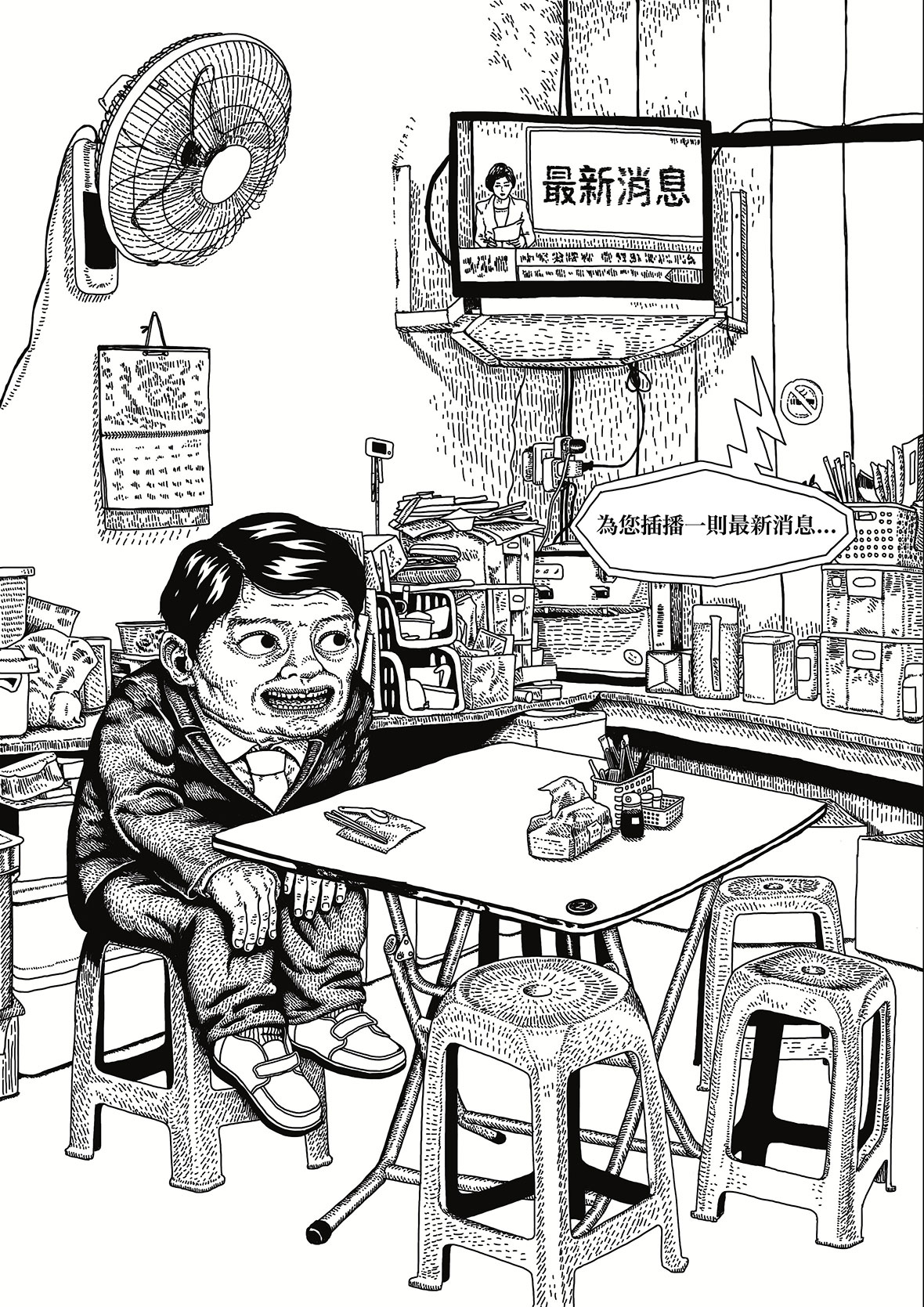 "Interrupting your broadcast for breaking news." 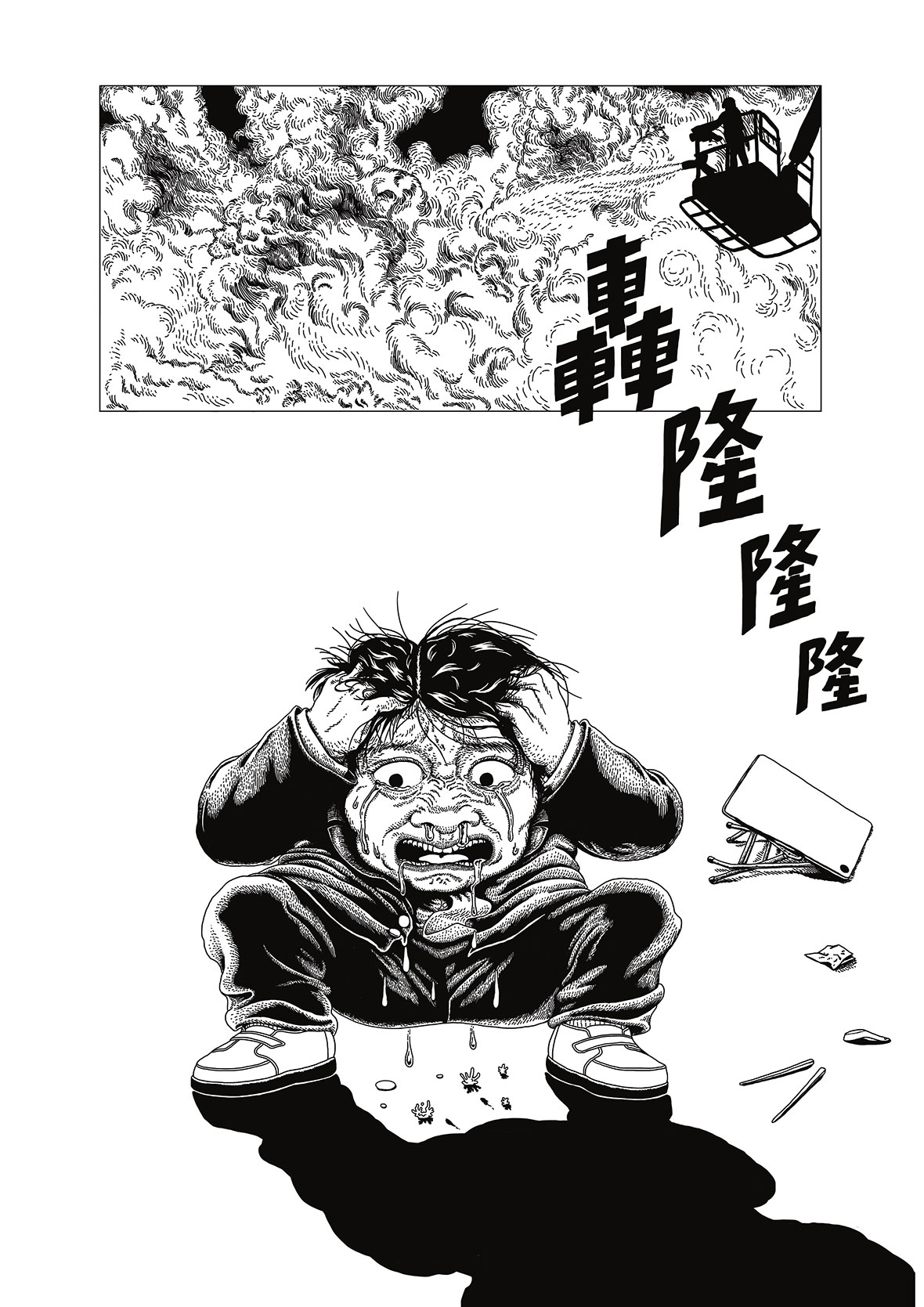 Since that first comic, Huang has completed two others. All are drawn in the same style, strictly black and white with an almost pointillist shading technique. “I’m a little color blind and my college professor told me my color sense is terrible,” he chuckles. “I was using a brush tip pen in high school, then used a fine tip, and when I switched to digital I continued the style.” 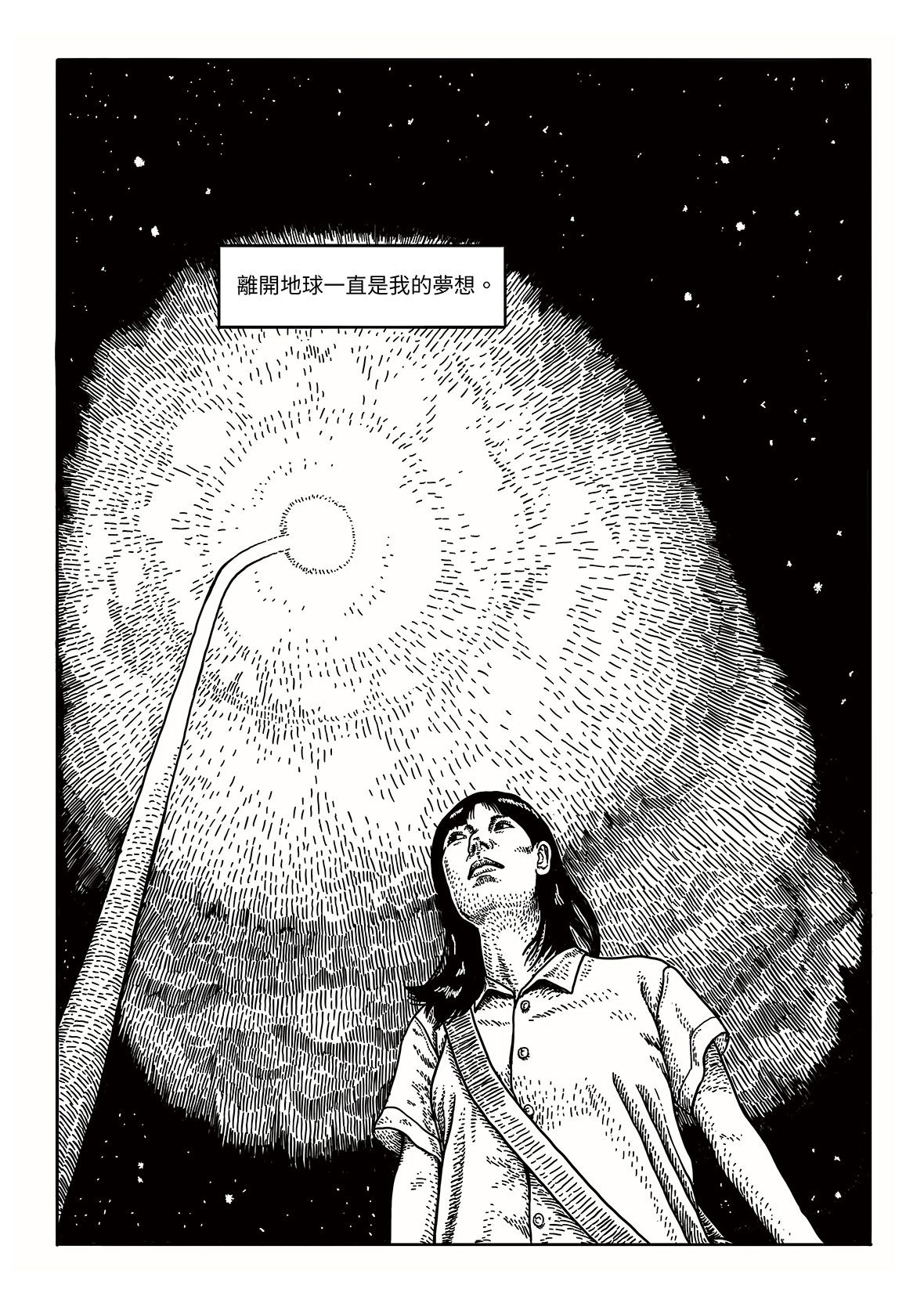 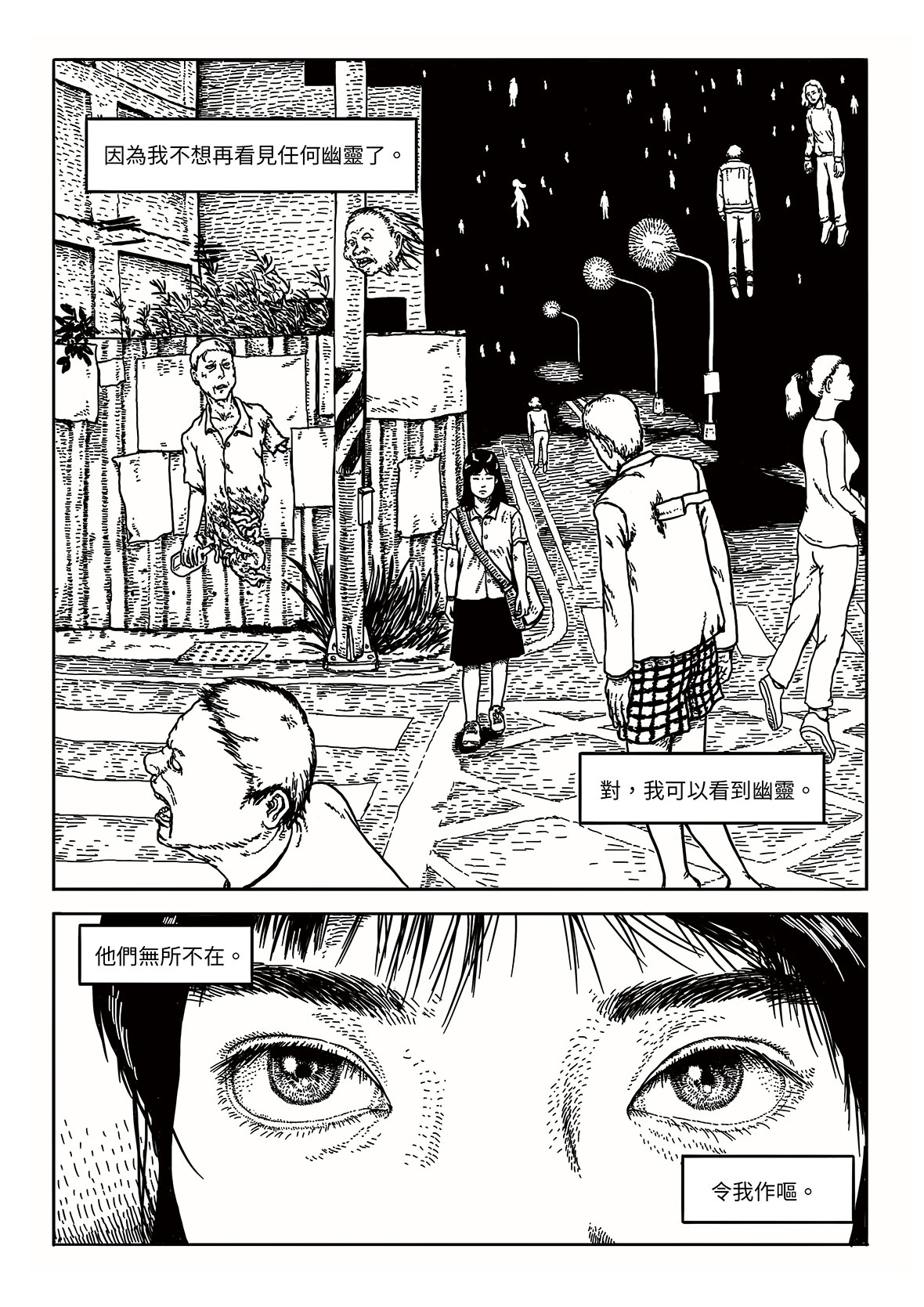 "It's because I'm tired of seeing ghosts. Yup. I can see them all."
"They're everywhere. It's revolting." 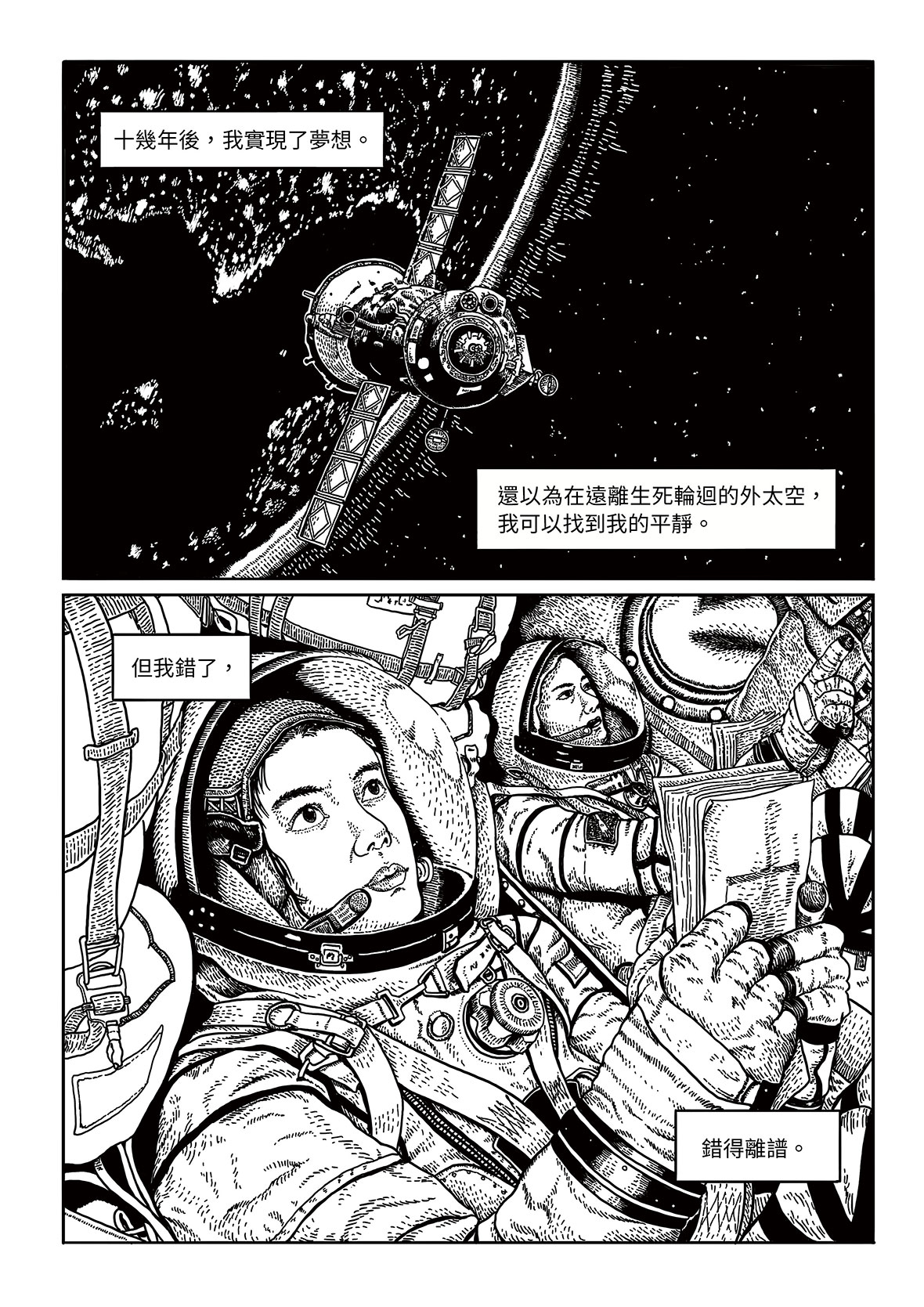 "A decade plus later, my dream came true."
"I thought I could escape these entities in space and find my peace."
"I was mistaken. Wrong to a shocking degree." 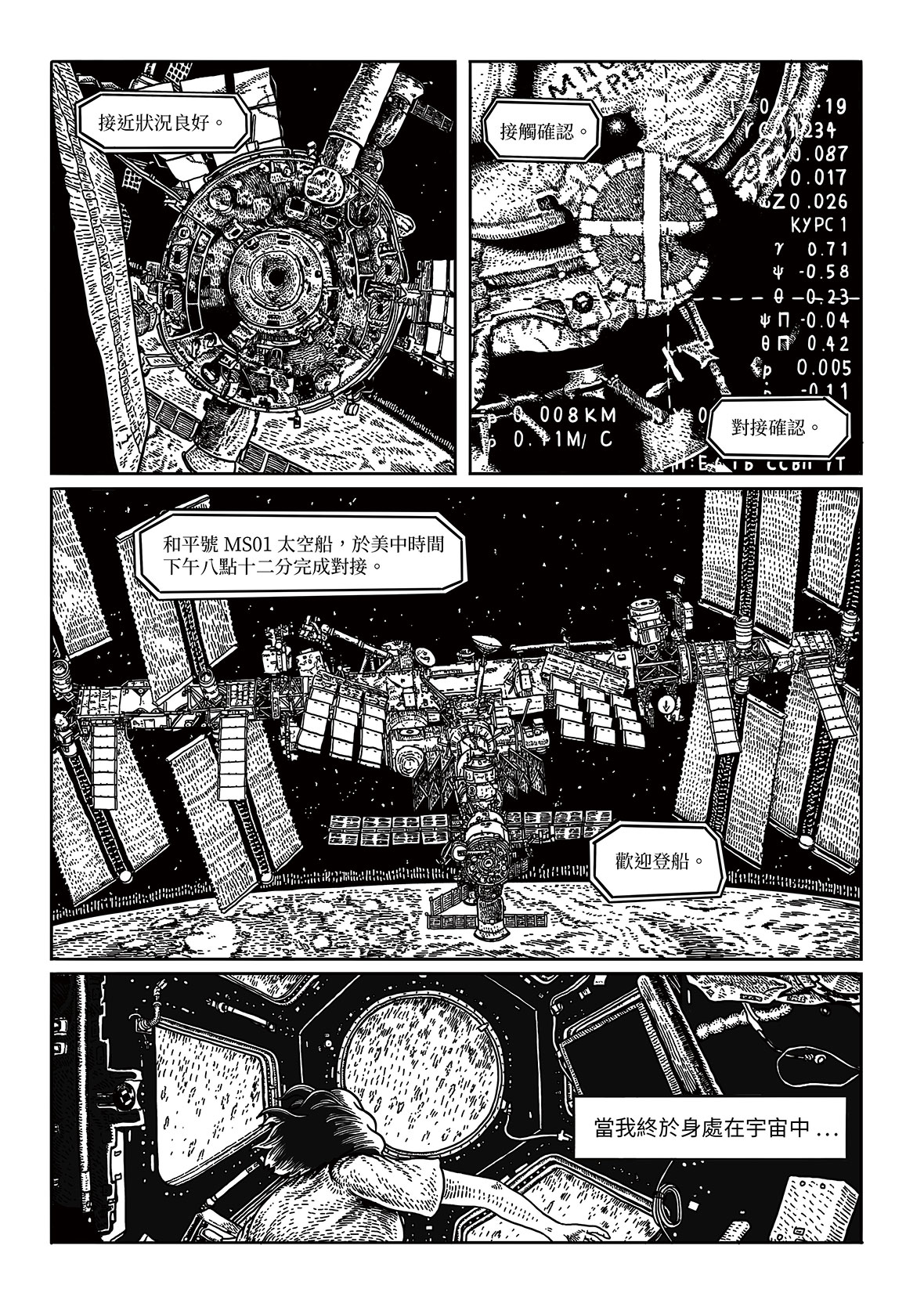 "You're clear to dock. Docking successful. "
“Mir spacecraft MS01 has docked at 8.20pm. Welcome aboard."
"Finally making it to space..."

“Ghosts From Outer Space” drills deeper into feelings of despair and horror. In one panel, a giant, blob-like monster growing out of the Earth with tentacles that eat up ghosts in space. Circular orbs glom onto each other, creating the shape of growing ​​tendrils the stretch into the exosphere, which is packed with the white silhouettes of ghosts floating aimlessly in orbit. This illustration was the comic’s initial inspiration. Huang had drawn it for fun and decided to expand it into a full story afterward. “I was having trouble explaining to people what the drawing was about, so I created a whole story to back it up.” 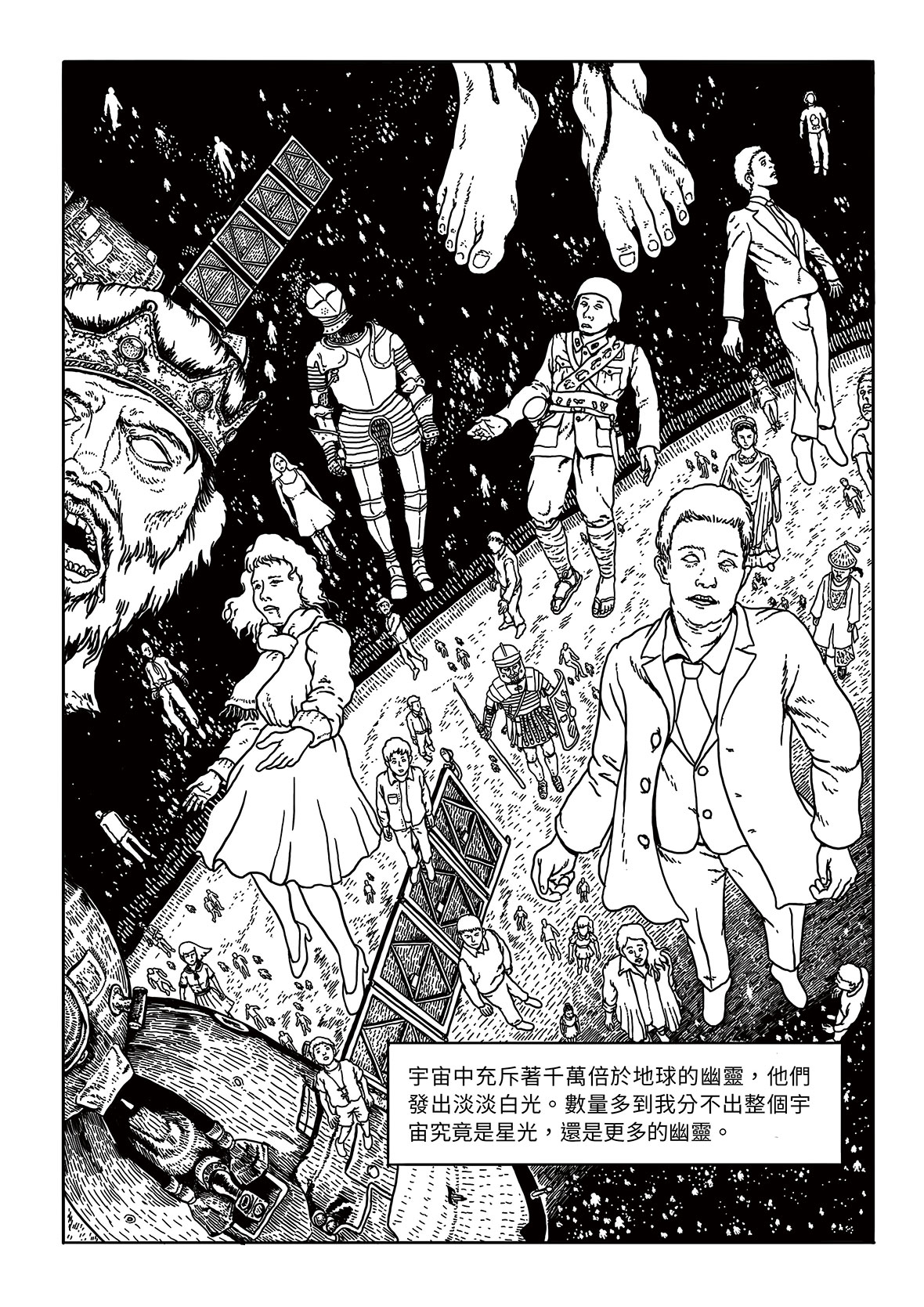 "I saw millions of apparitions. They all had a faint white glow. Their numbers were so vast that I couldn't tell whether it was starlight or more of them in the distance." 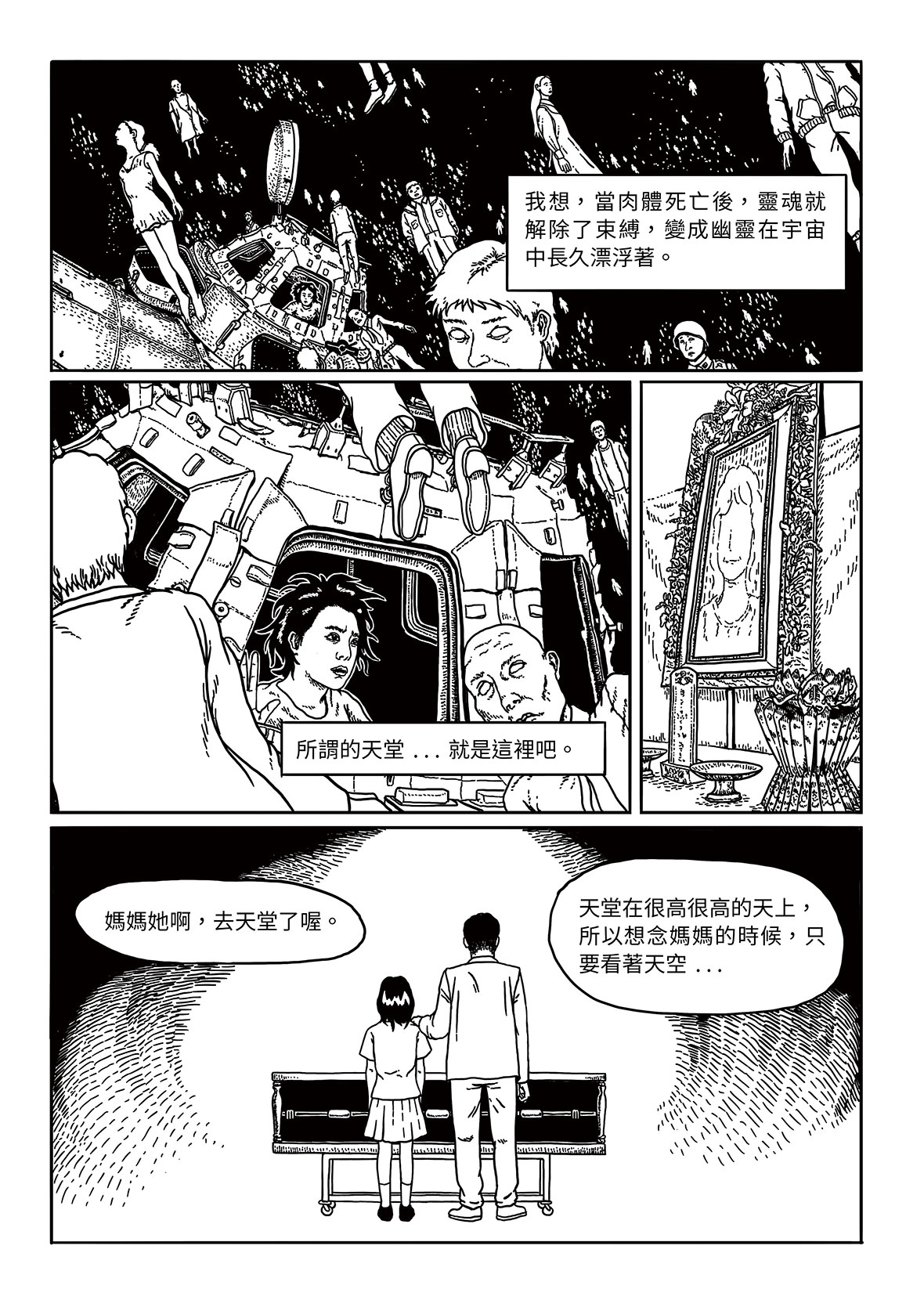 “I think that when our physical bodies die, our spirits become untethered and float off into space."
"I supposed this is what people call heaven."
"Mom left and went to heaven."
"Yup. Heaven is right above us, so if you miss her, just look up..." 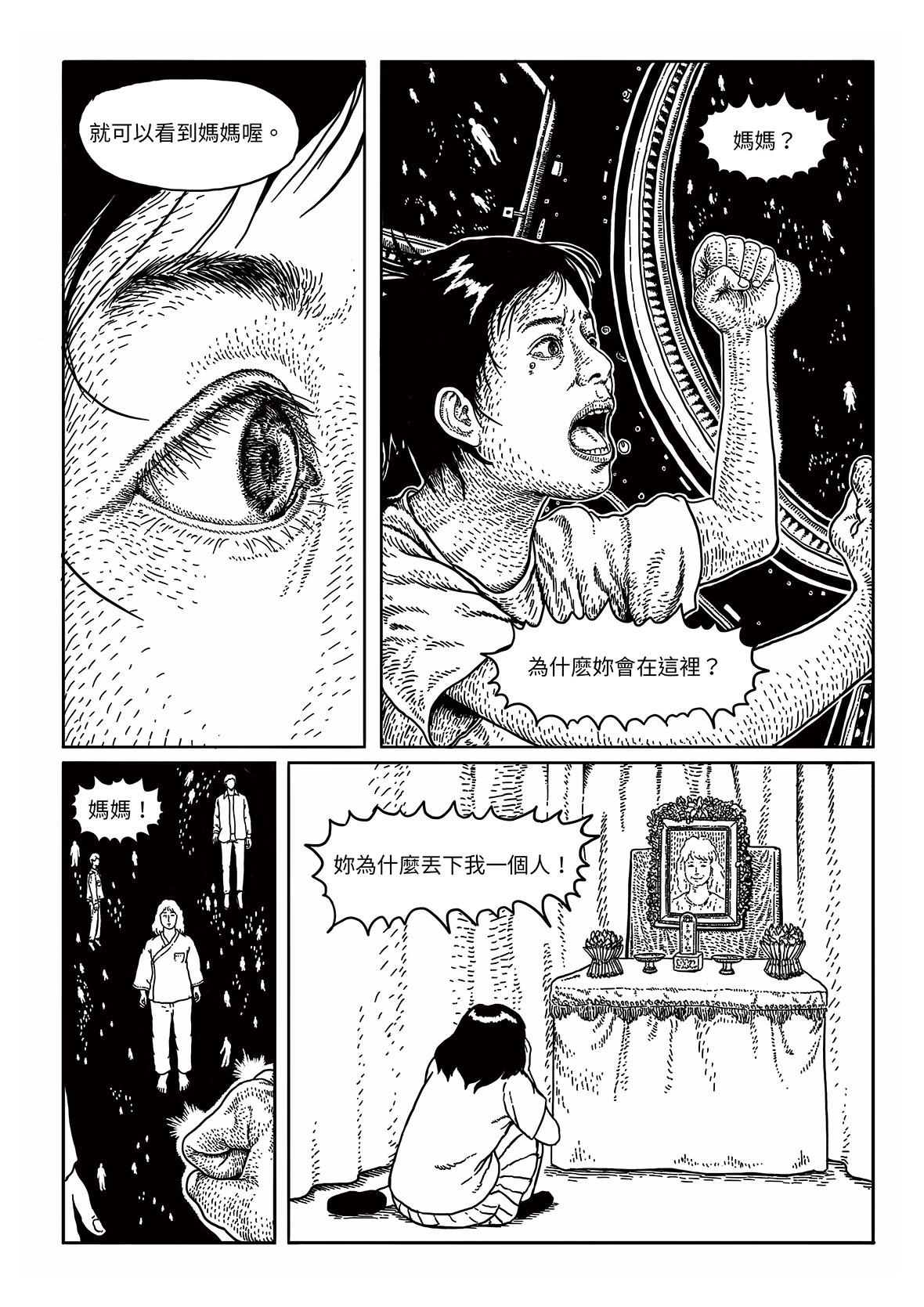 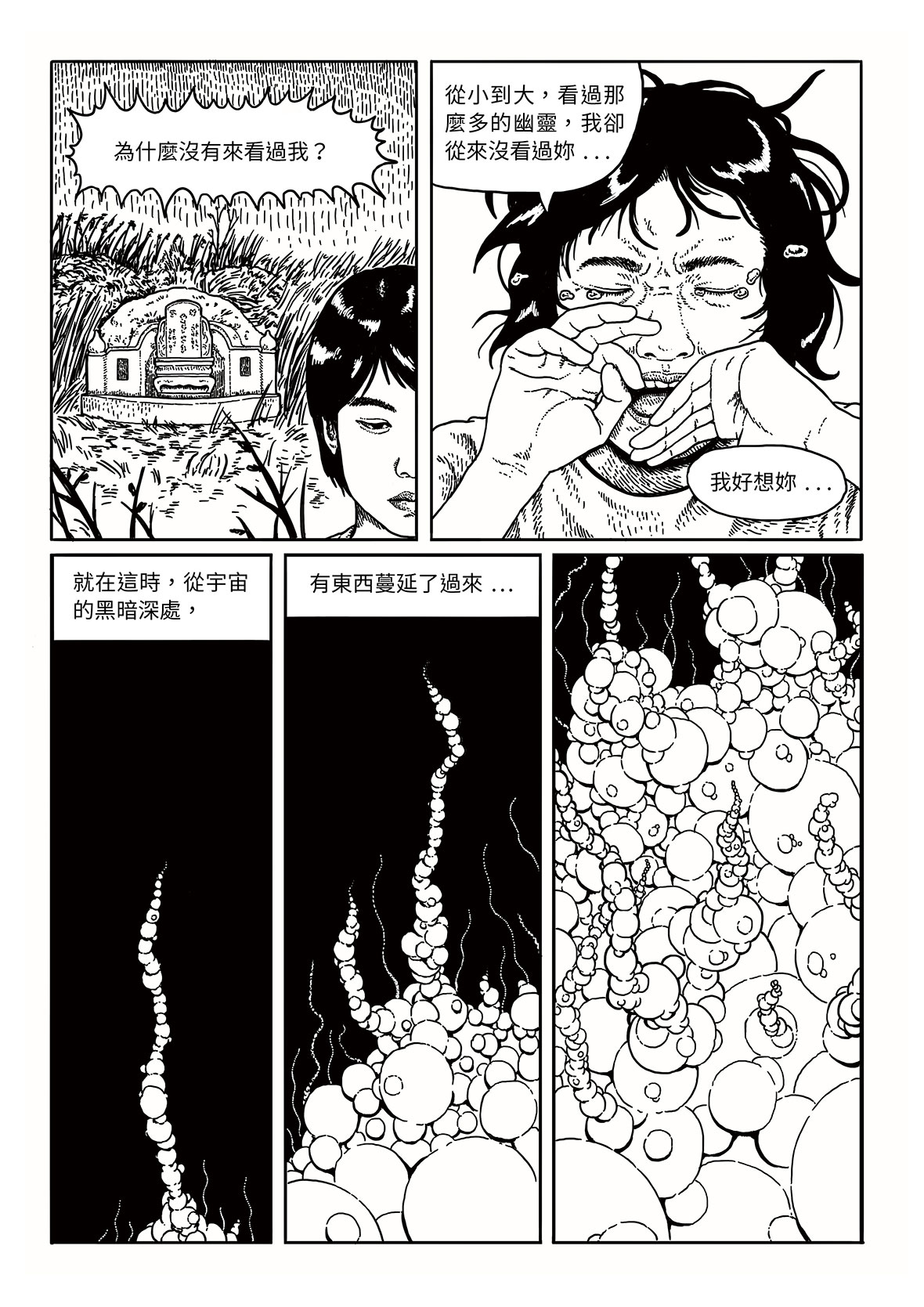 "Why haven't you come see me?"
"Growing up, I saw so many spirits, but I never saw you. I miss you so much."
"At that moment, from the abyss of the galaxy, something crawled out of the darkness."

It’s the story of a woman who’s been haunted by spirits her whole life—their mangled, tortured bodies present at every waking moment. She joins NASA to escape from it all, hoping the vacuum of space will offer peace and quiet. Instead, she finds the entire history of human kind on Earth in orbit, including her mother. Then the blob grows into space eating the ghosts, mom and all. Her fellow astronauts can’t see the ghosts and think she’s gone insane, so they send her back to Earth, where babies start being born dead without souls. 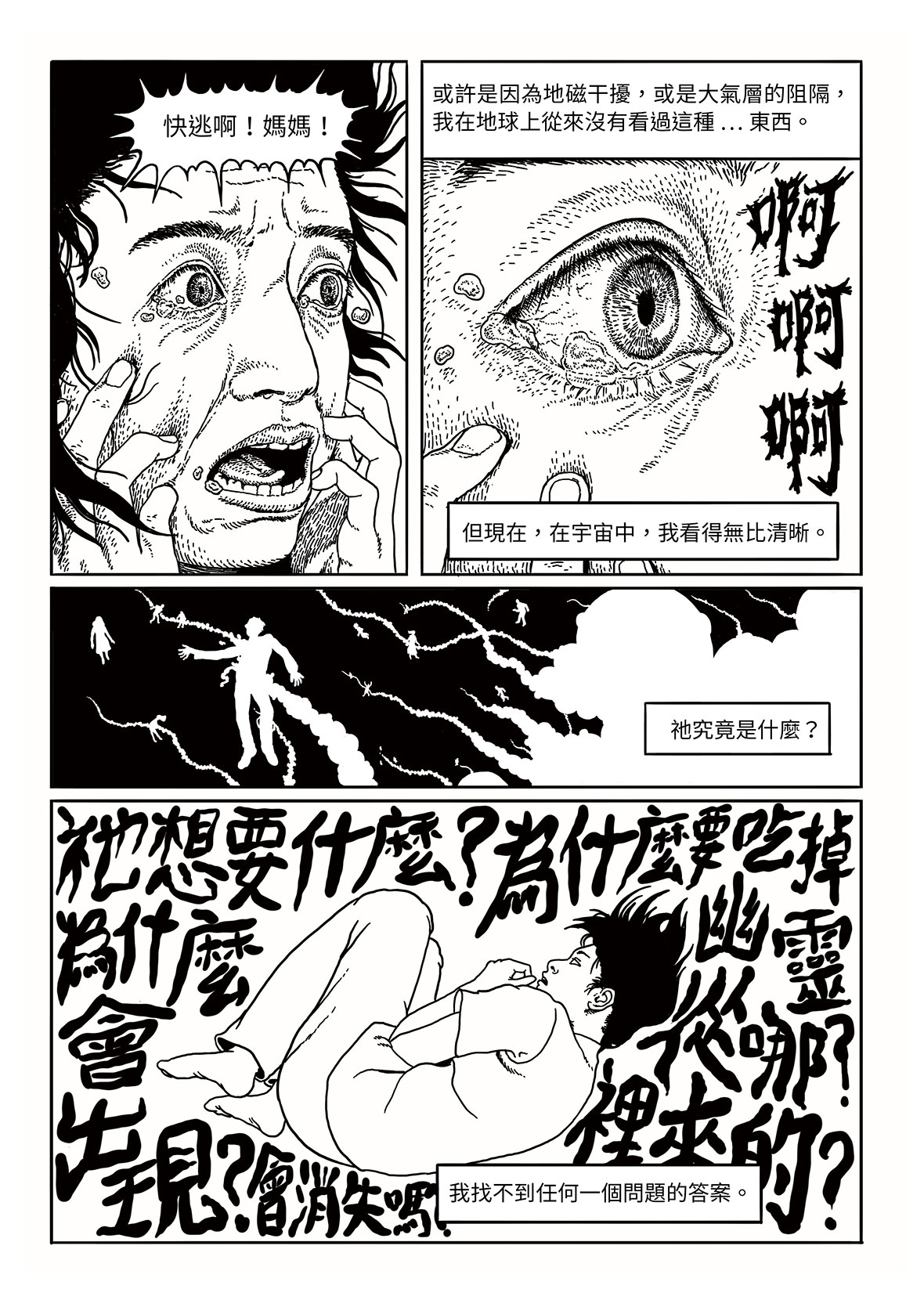 "Mom!! Run!"
"Maybe it's because of earth's gravity, or interference from the planet's atmosphere, I've never seen anything like this. But in space... it's clear as day."
"What is it?..."
"What does it want? Why is it devouring human souls? Where did it come from? I had no answers." 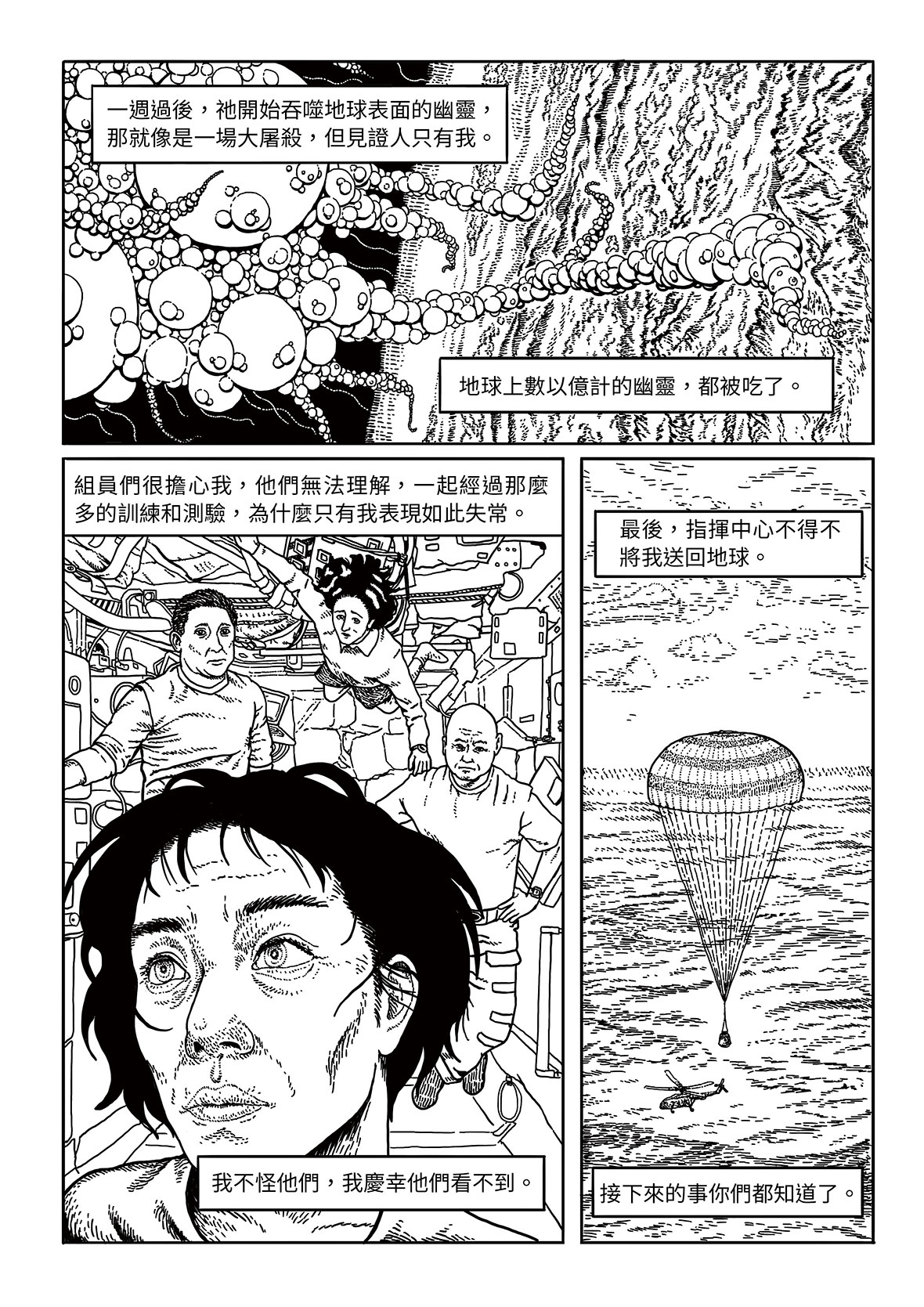 "A week later, it came for human souls on earth. It was a massacre, of which I was the only witness. Billions of souls were eaten."
"My crew mates became worried about me. We trained together and underwent pre-flight therapy together, why was I the only one so out of it? I don't blame them. They're lucky that they don't see what I see."
"In the end, command sent me back down to earth. And you know the rest." 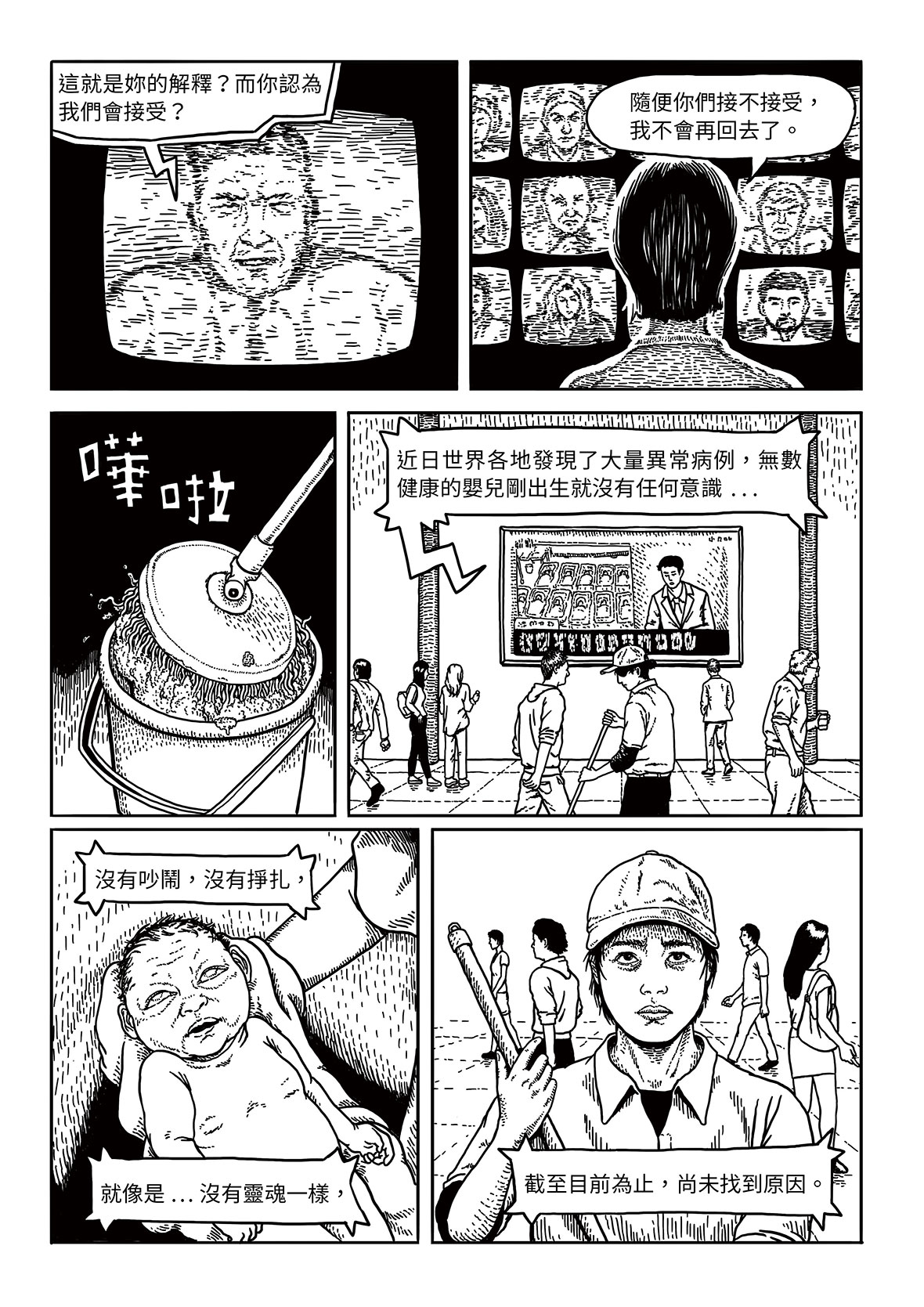 "This is your explanation? And we're supposed to believe it?"
"It doesn't matter what you believe. I'm not going back."
"In recent days, an unexplained disease has seemingly spread around the world that's affecting all newborns."
"They're seemingly without conscious. They don't cry or move. It's like they have no souls. There's no medical explanation." 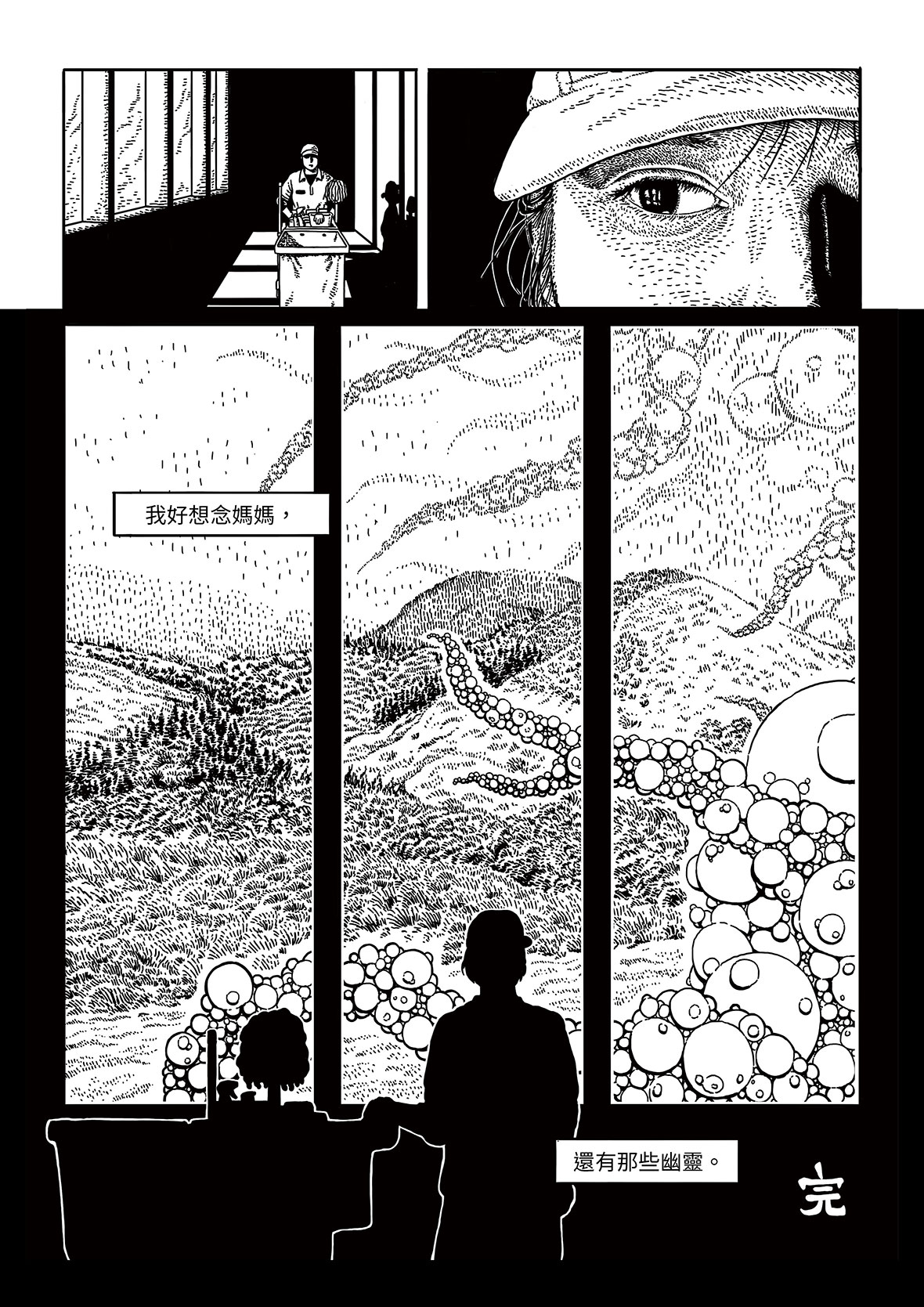 "I miss mom... and even all the other spirits."

For “Phantom Limb,” Liang-Chun wanted to draw a full-fledged horror story. Although it’s pretty gruesome, full of blood and guts, it’s also about coming to terms with trauma. A man who’s been hospitalized with a lost limb after a car accident sees visions of monsters made from other people’s body parts. In the hero’s dream, he feels the soft and tender wet grass on his missing foot and wakes up happy. Originally, Liang-Chun just wanted to draw a bunch of hacked off limbs but added the deeper themes after getting that part out of his system. 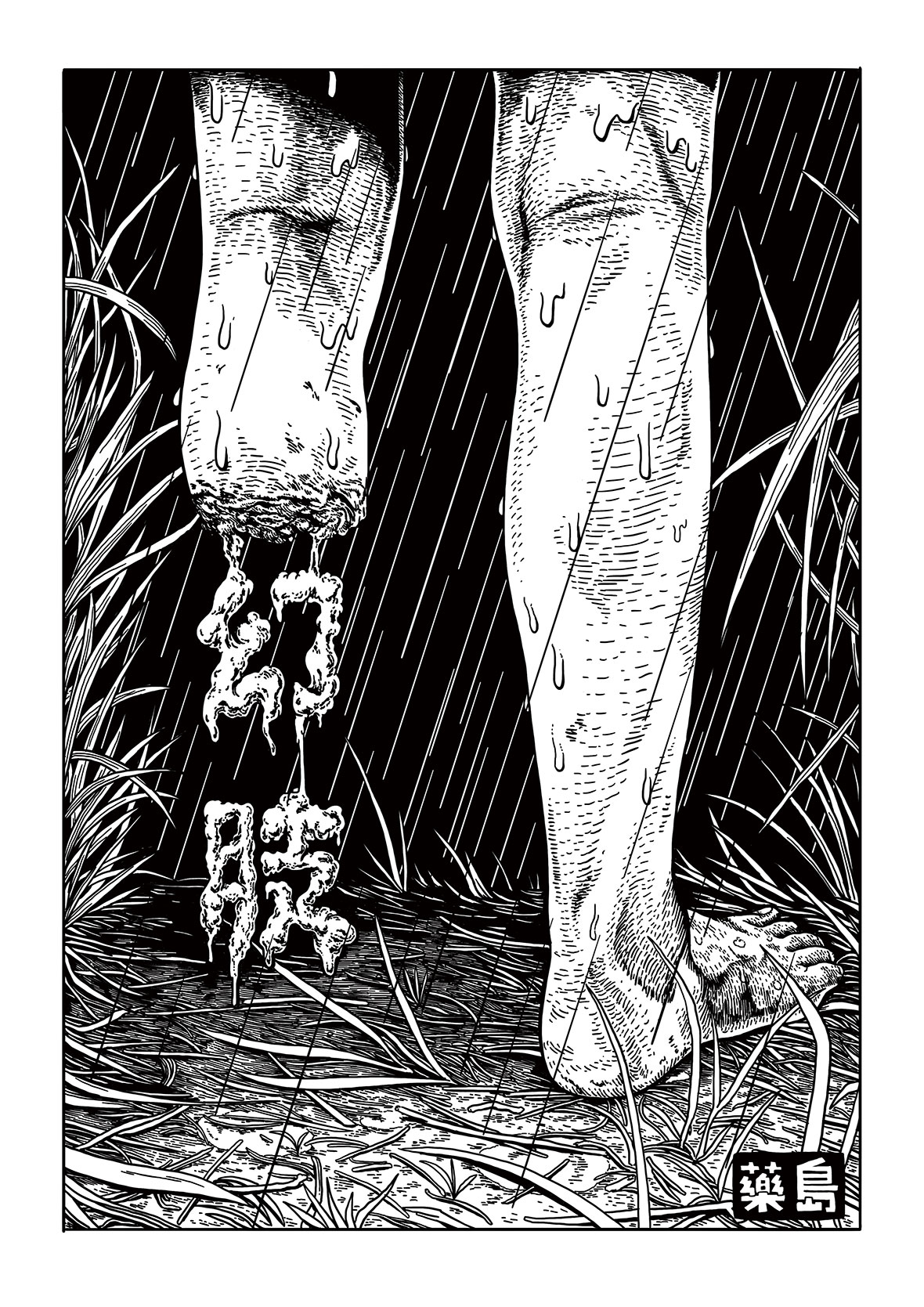 The cover page for "Phantom Limb." 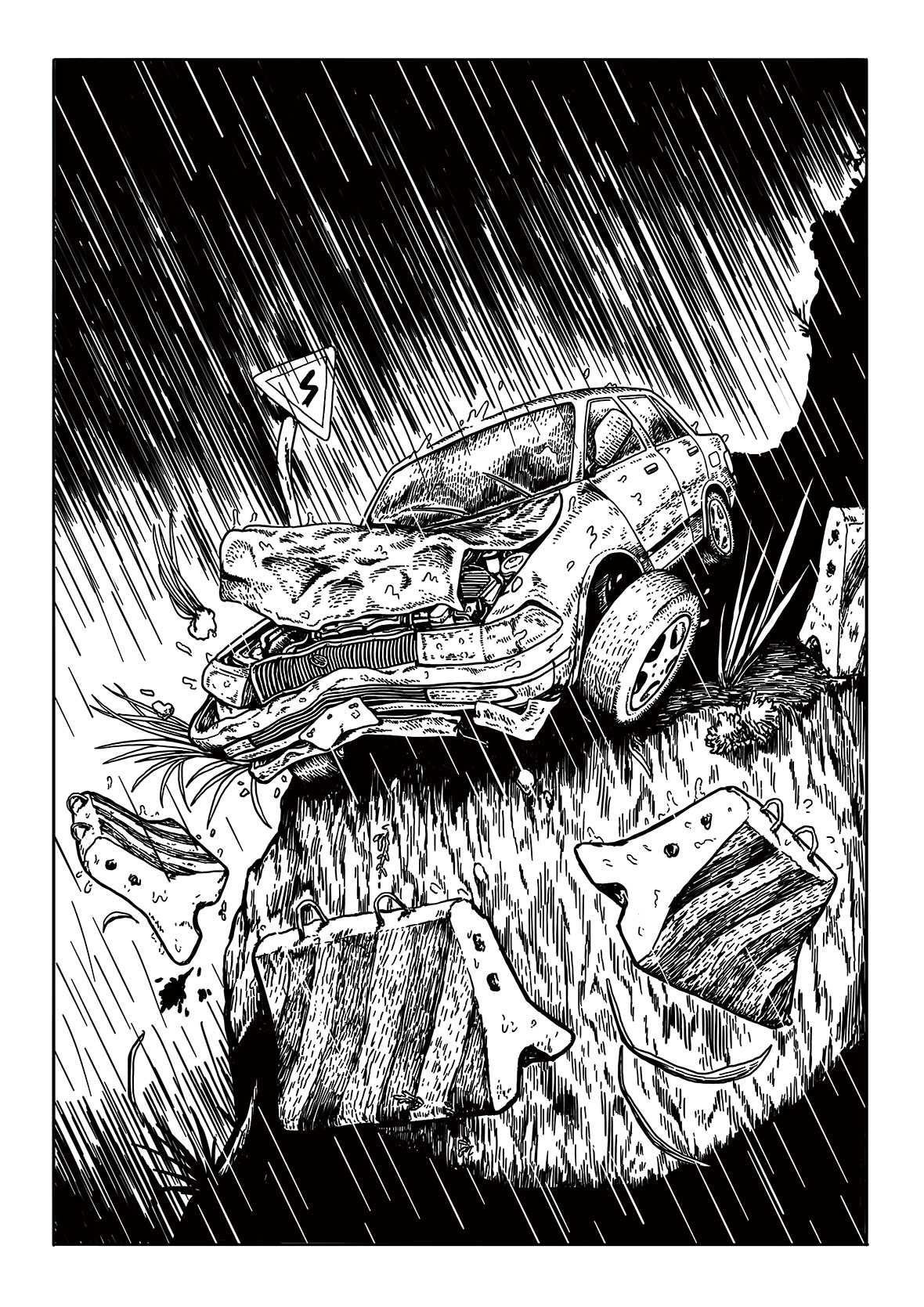 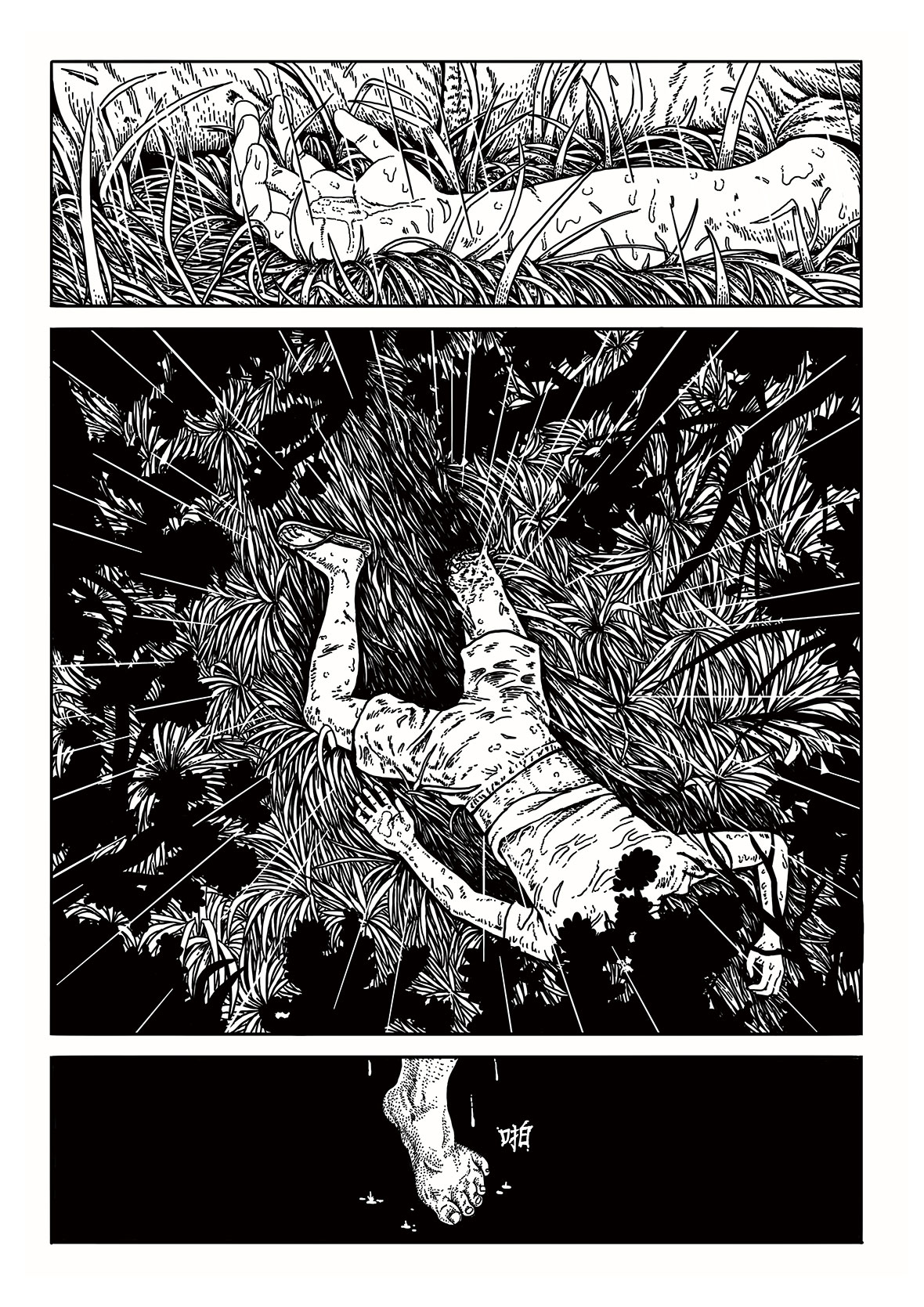 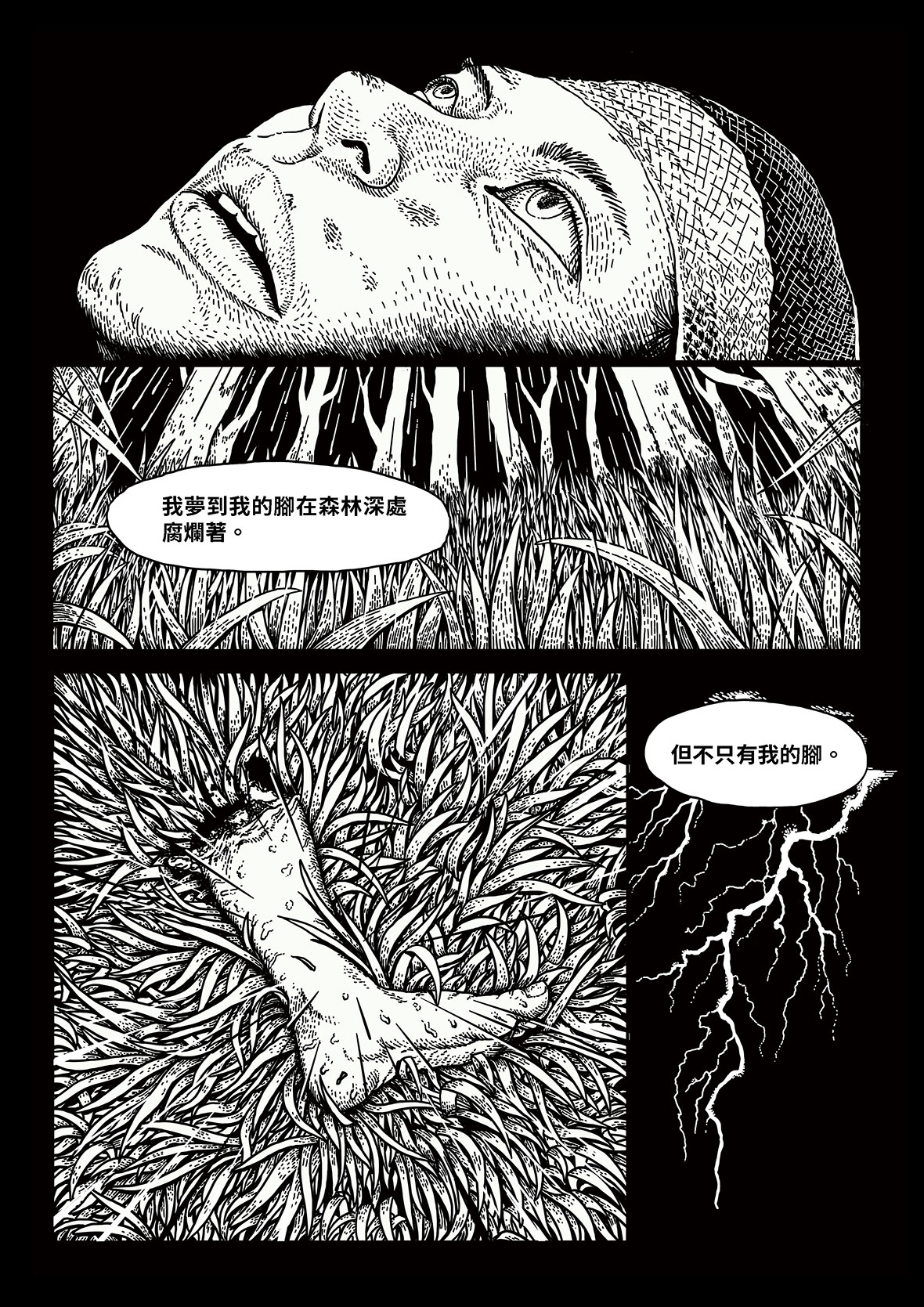 "I dreamt that my severed leg was deep in the forest, rotting away."
"But it wasn't just my foot."

All of Huang’s comics are available on the Creative Comic Collection website, a government-sponsored comics portal. He printed a couple of them before working with CCC, but readers will have to wait for the rest to be published. He says they’ve approved ten stories, which he expects to be published in about a year. “The government pays me to draw,” he smiles. “I won’t be rich or anything but I get paid to draw what I want.” 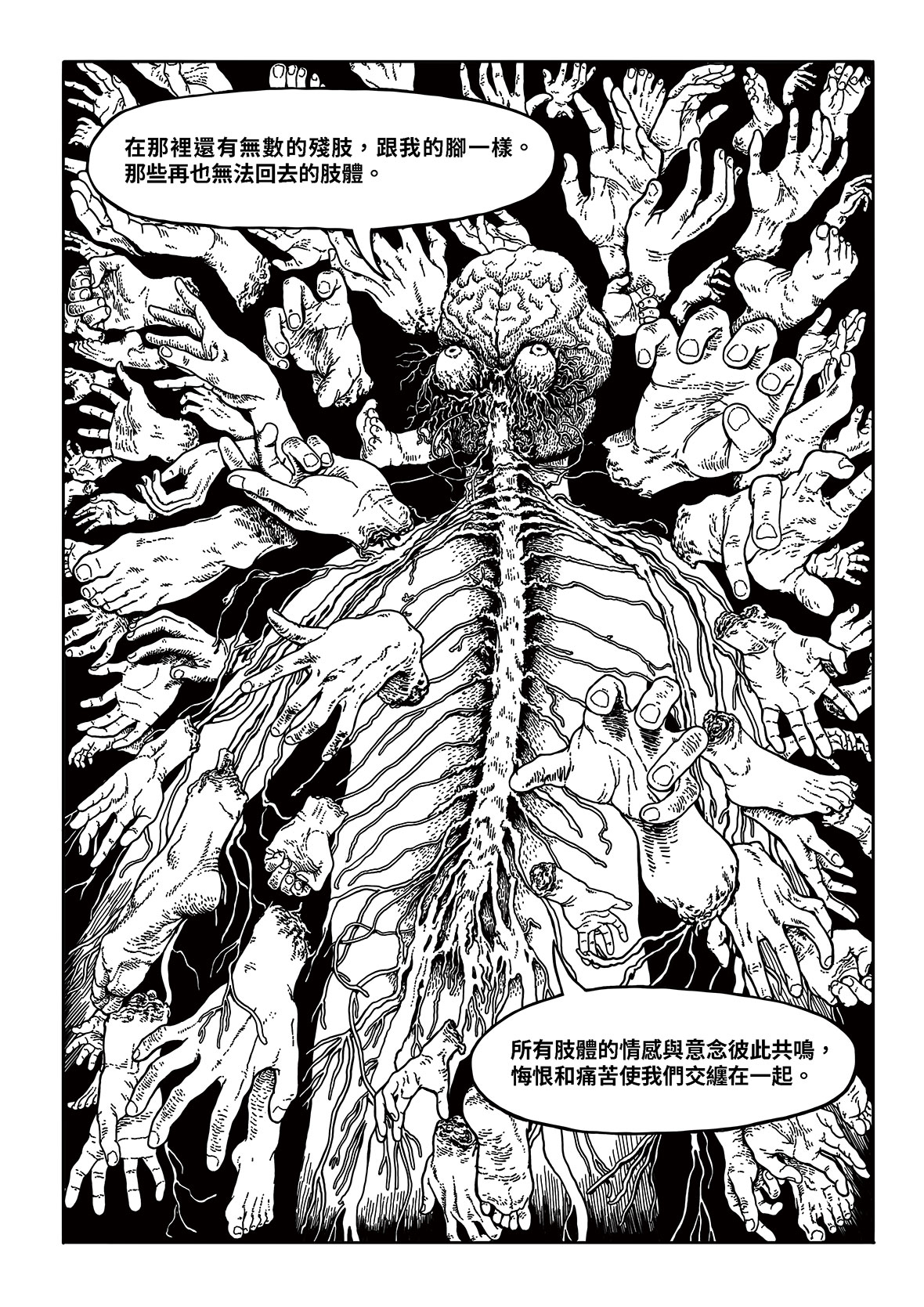 "Like my foot, countless other limbs were also there, appendages that had no place to return to. All of their woes, hate, and pain binding them together." 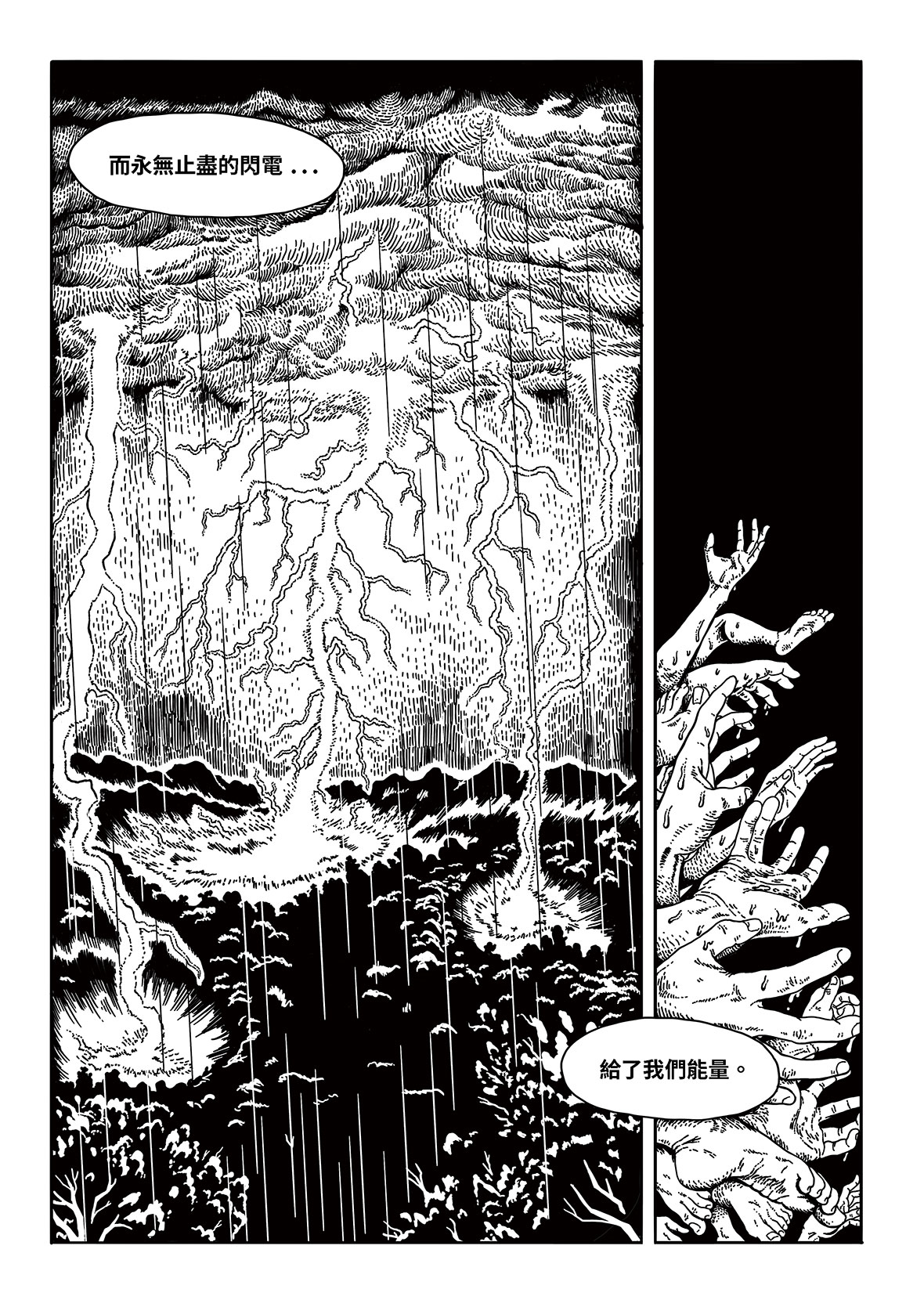 "By way of lighting, we were given power and life." 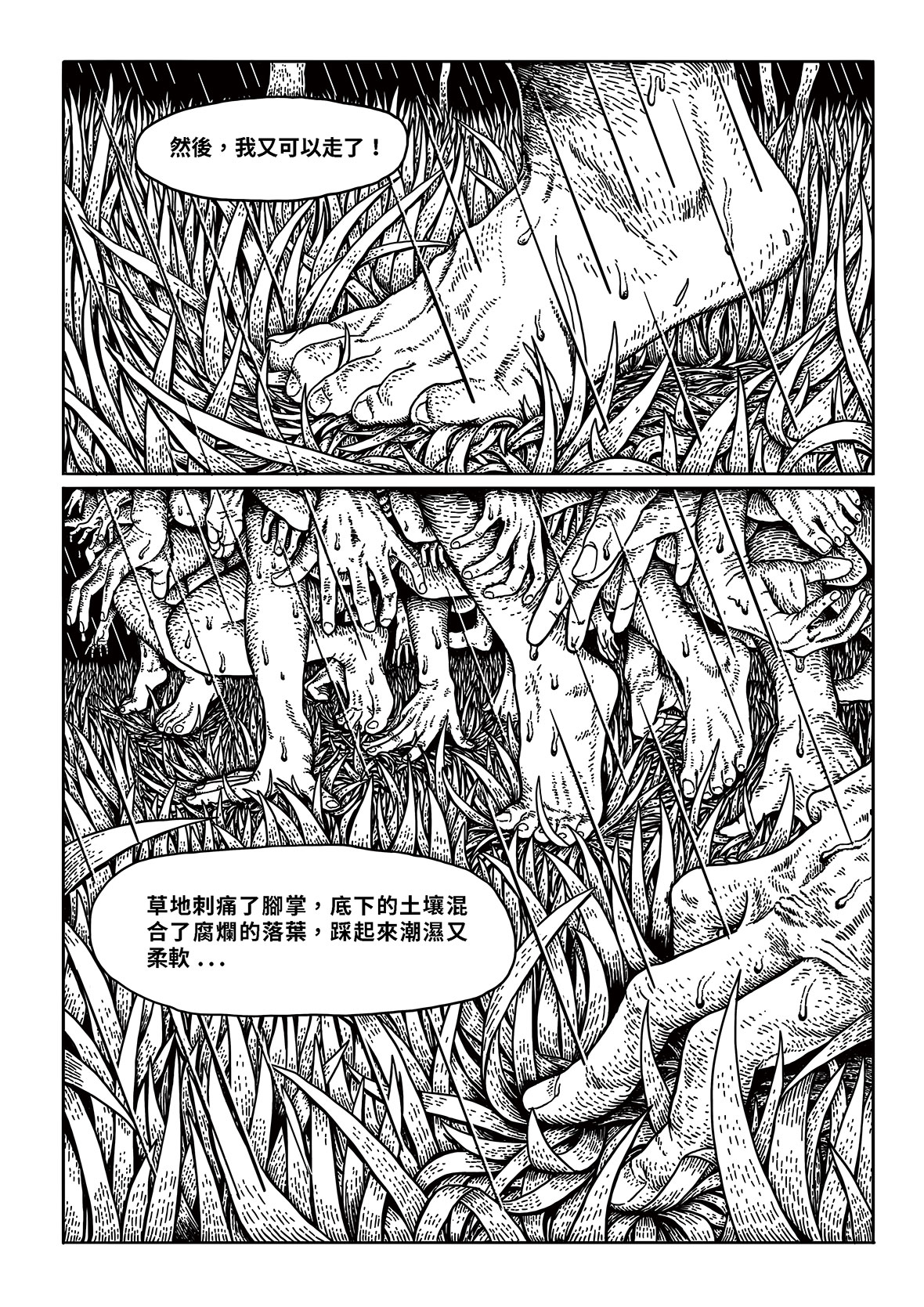 "And I could walk again."
"The grass cut into my soles, and the soft mud with the mushy leaves felt wet and soft." 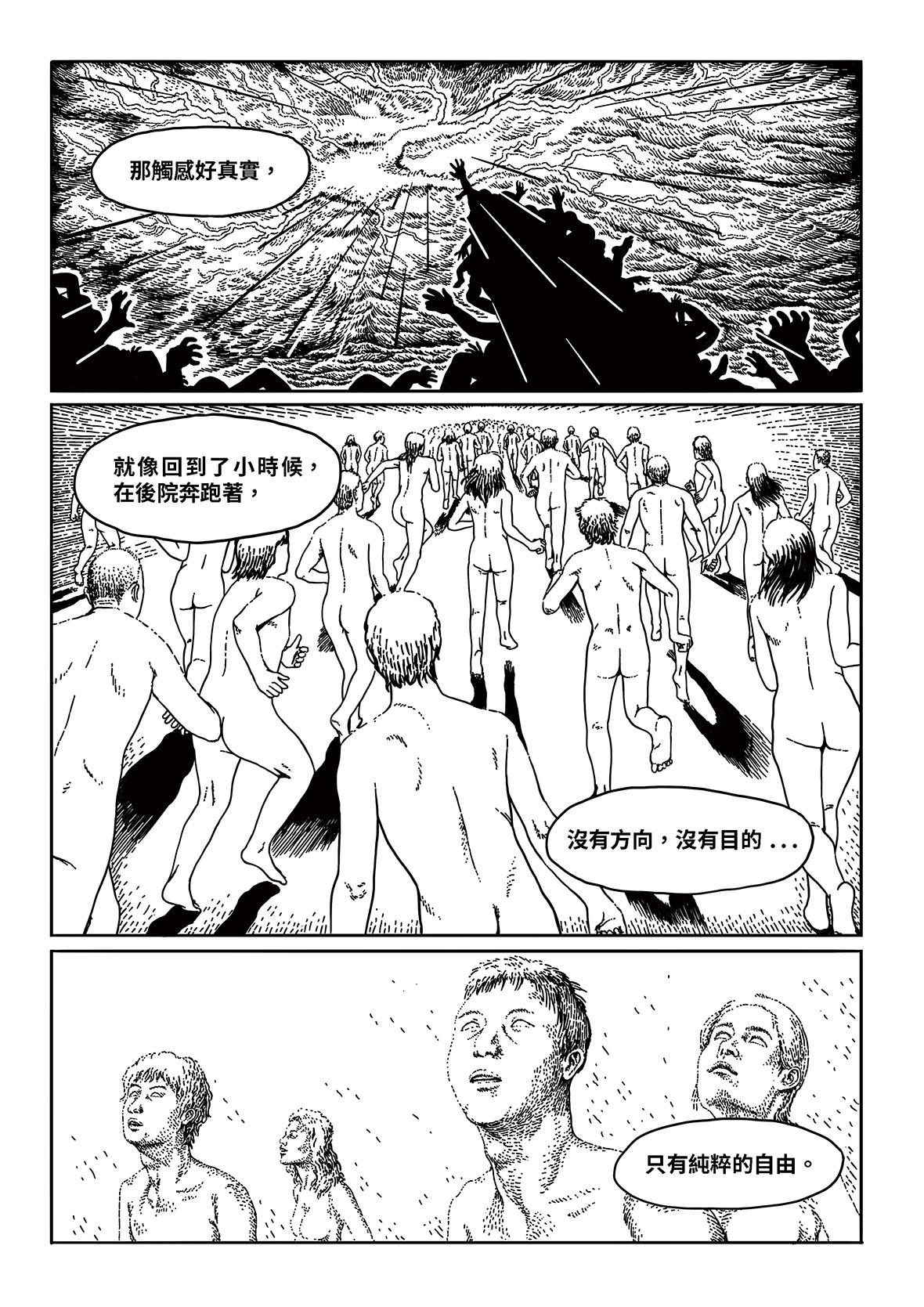 "That sensation brings me back."
"It felt as if I were a kid again, running through the backyard. No direction and no destination—just freedom."

Huang’s work delves into dark themes, with gore and destruction always a page away. Even when it’s just a scene of restaurant patrons enjoying tasty noodles, it looks ghastly and dangerous. Massive spreads of ghouls and blazing fires are regular. They’re fantastical stories, happy to explore unreal worlds with flying creatures and blurred lines between the living and the dead. But he always strives to bring a human element to his tales, something that speaks truth to our souls. His characters deal with trauma, whether that be the death of a loved one or a life-changing accident. Some find peace and others don’t, much like the real world. It’s a balance that lets readers escape but also keeps them thinking.