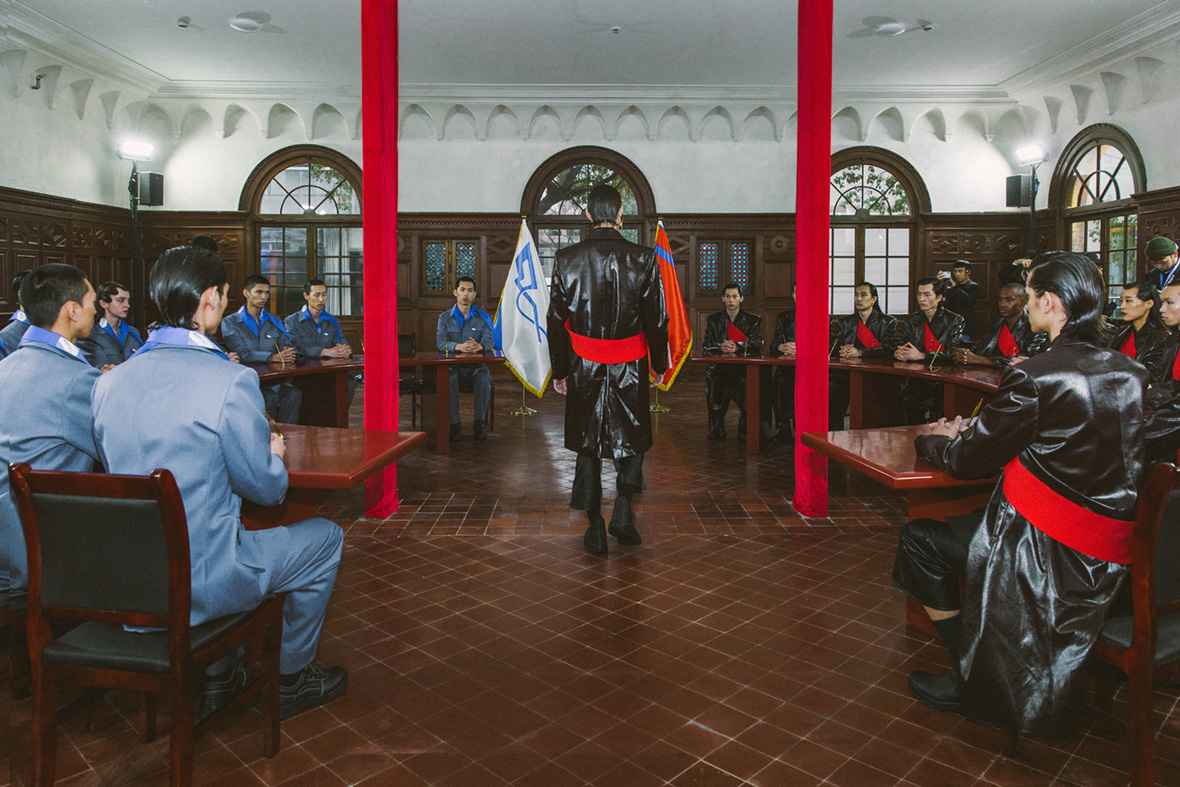 Making my way past the stylishly dressed crowds and hordes of photographers at this year’s fashion week, I found myself at a history-making conference.

Inside, distorted audio of Party propaganda played in my ears as I was ushered into a dimly lit room. A set of red curtains being slowly pulled back marked the beginning of the show. Two different factions, differentiated by the pop of red and blue on their outfits, entered space. Gathered around them, a third group dressed in a neutral gray watched on. Representing nihilists and idealists, the red and blue parties seated across from one another at the circle of conference tables suddenly erupted in argument. After a heated back and forth, the negotiations end amicably with members from both factions amicably shaking hands. 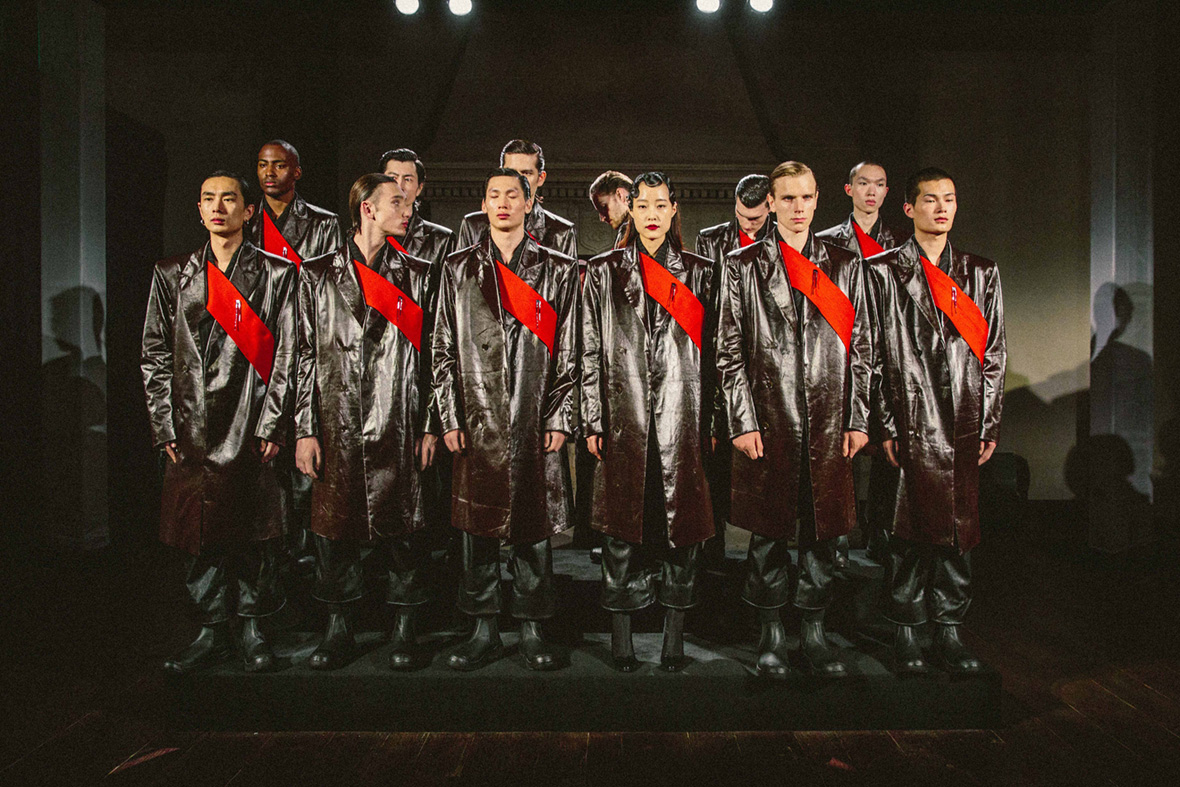 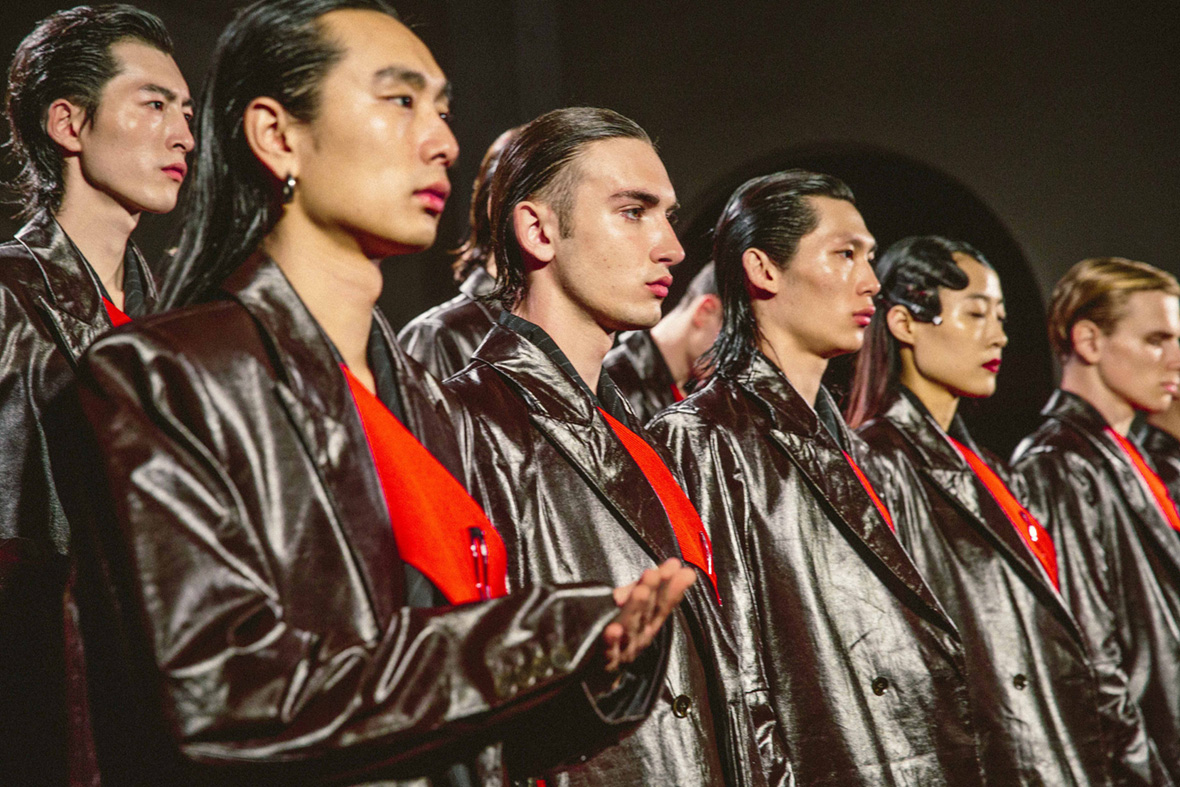 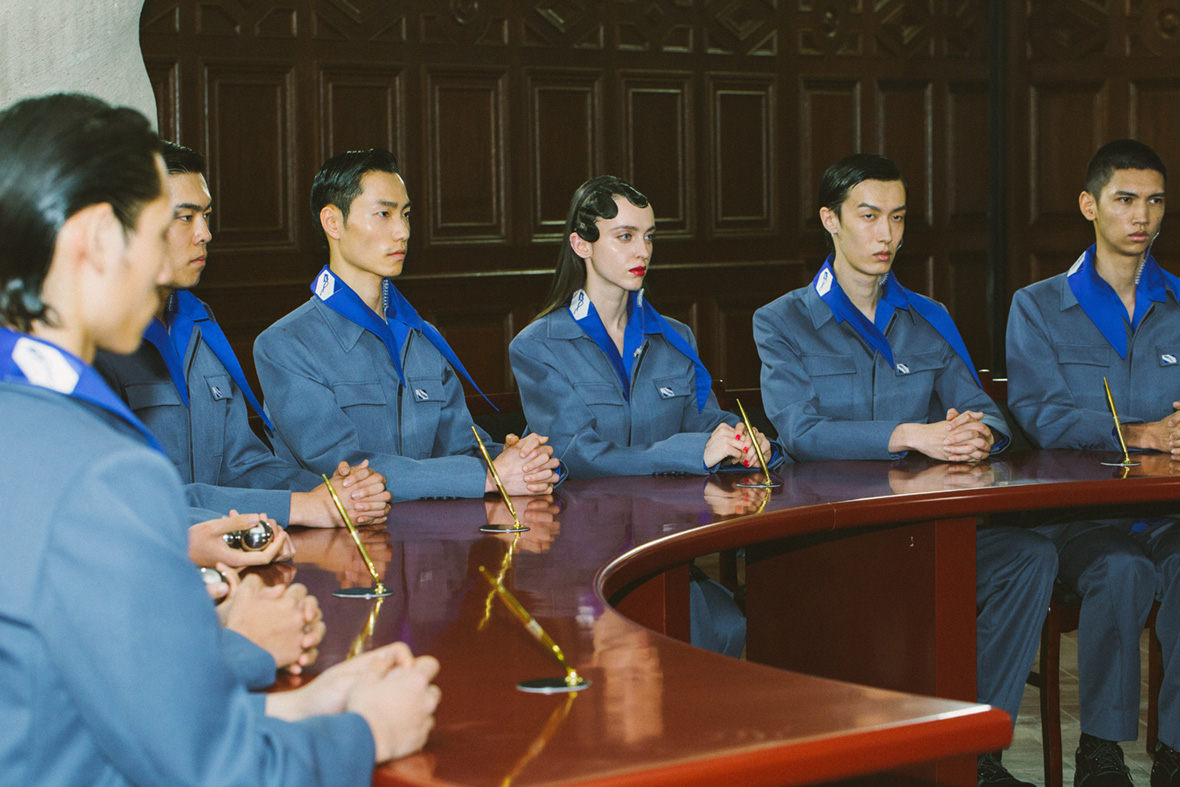 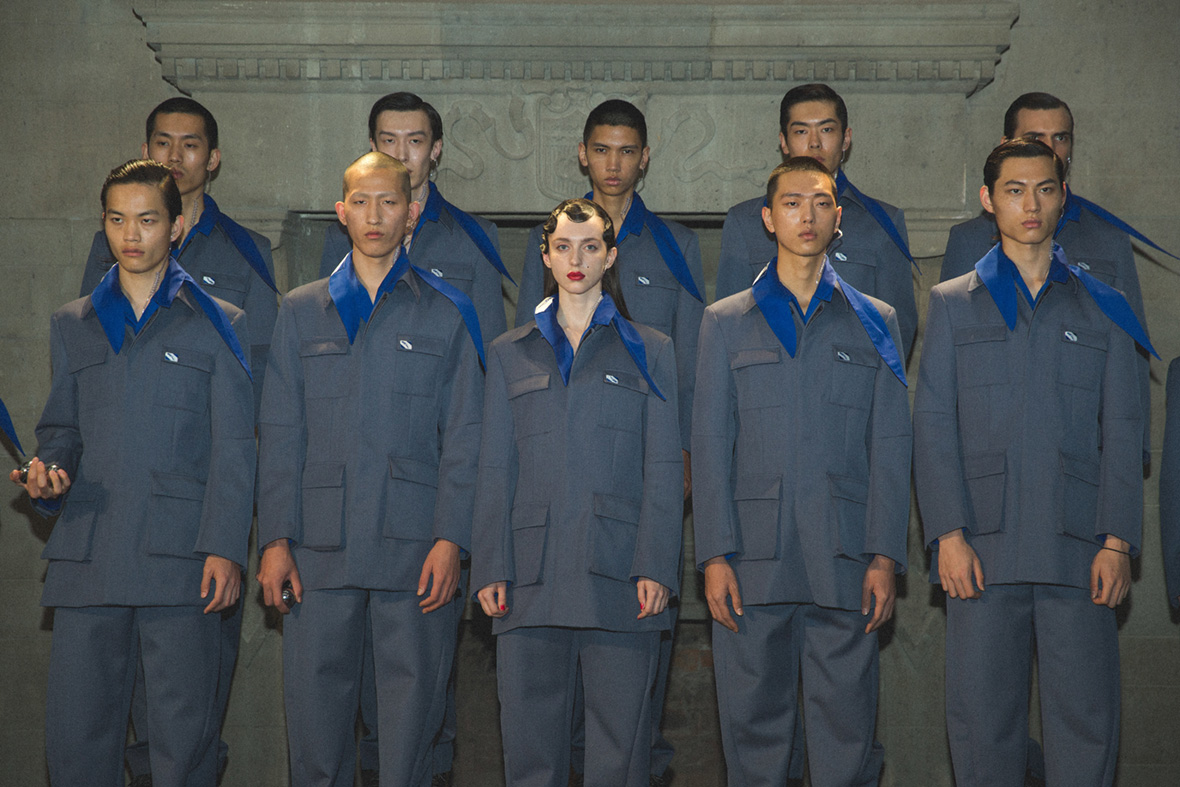 A closer look at the models reveal meticulously designed pieces worn beneath their seemingly identical outfits and impeccable makeup work. By this point, it was clear that XIMON LEE has tossed all fashion show conventions out the window for its 2019 A/W collection. The attending audience transcended the role of passive observers; they became officials presiding over this roundtable negotiation. 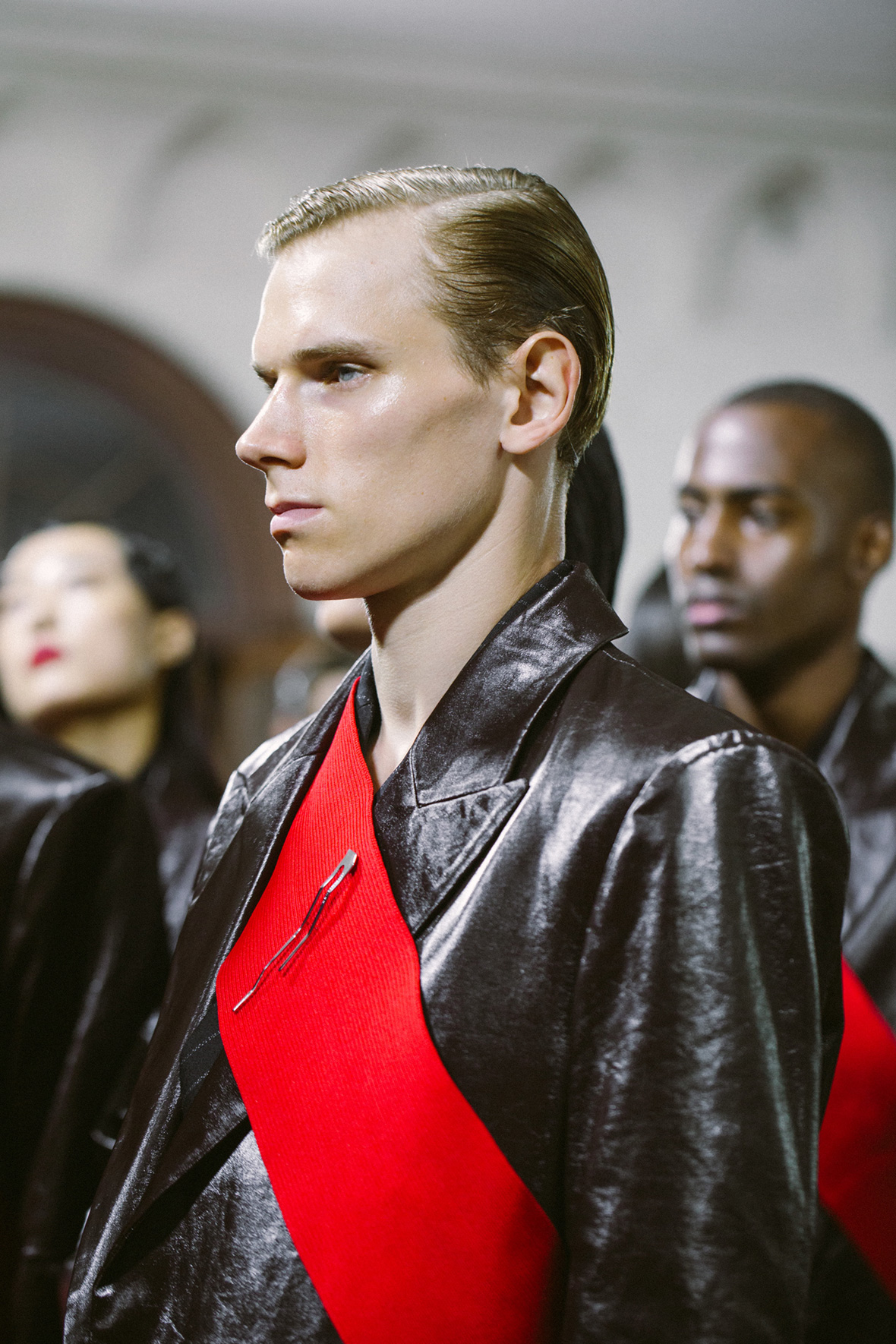 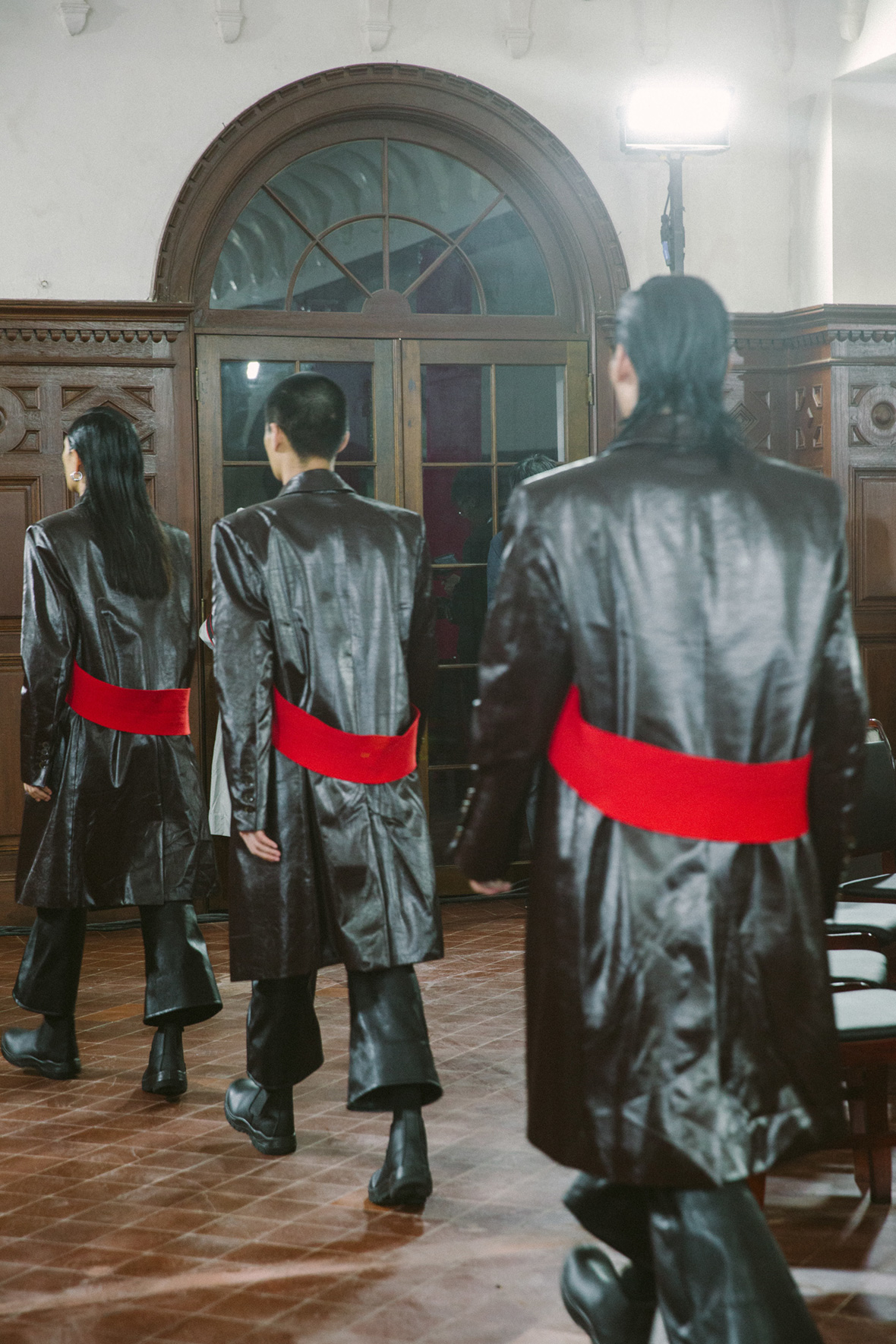 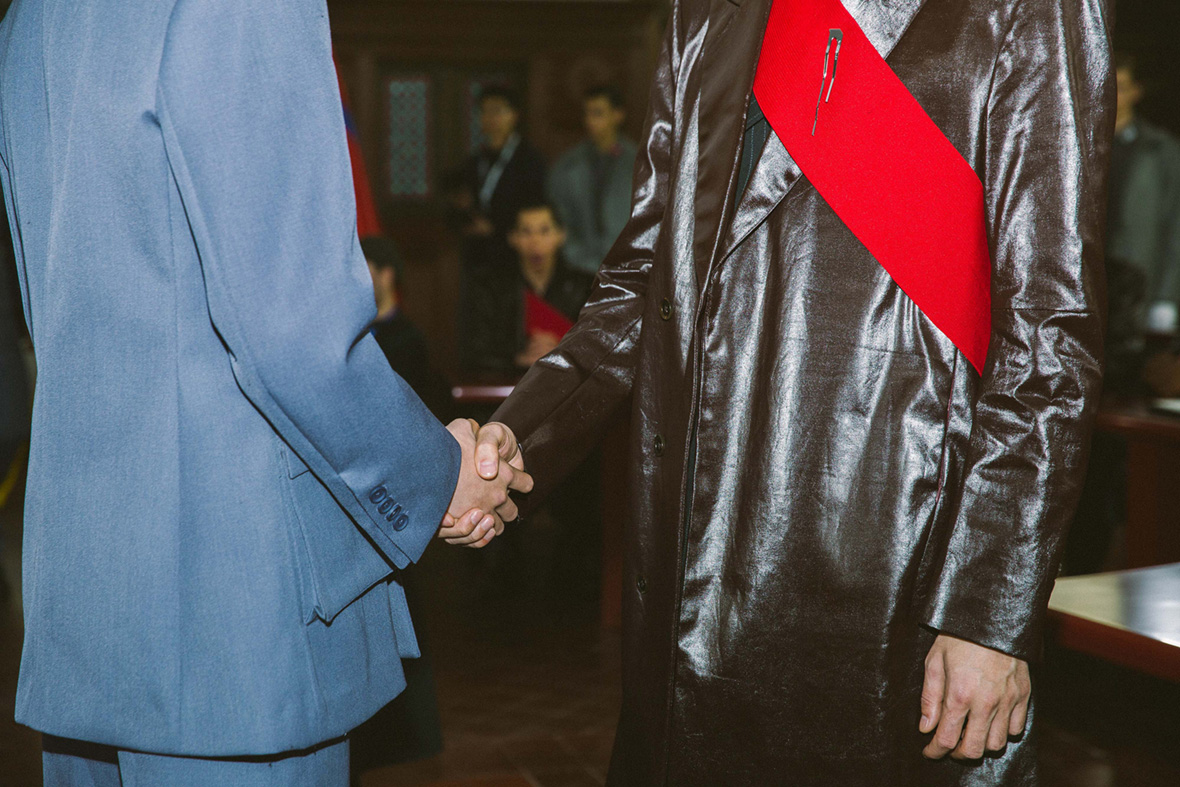 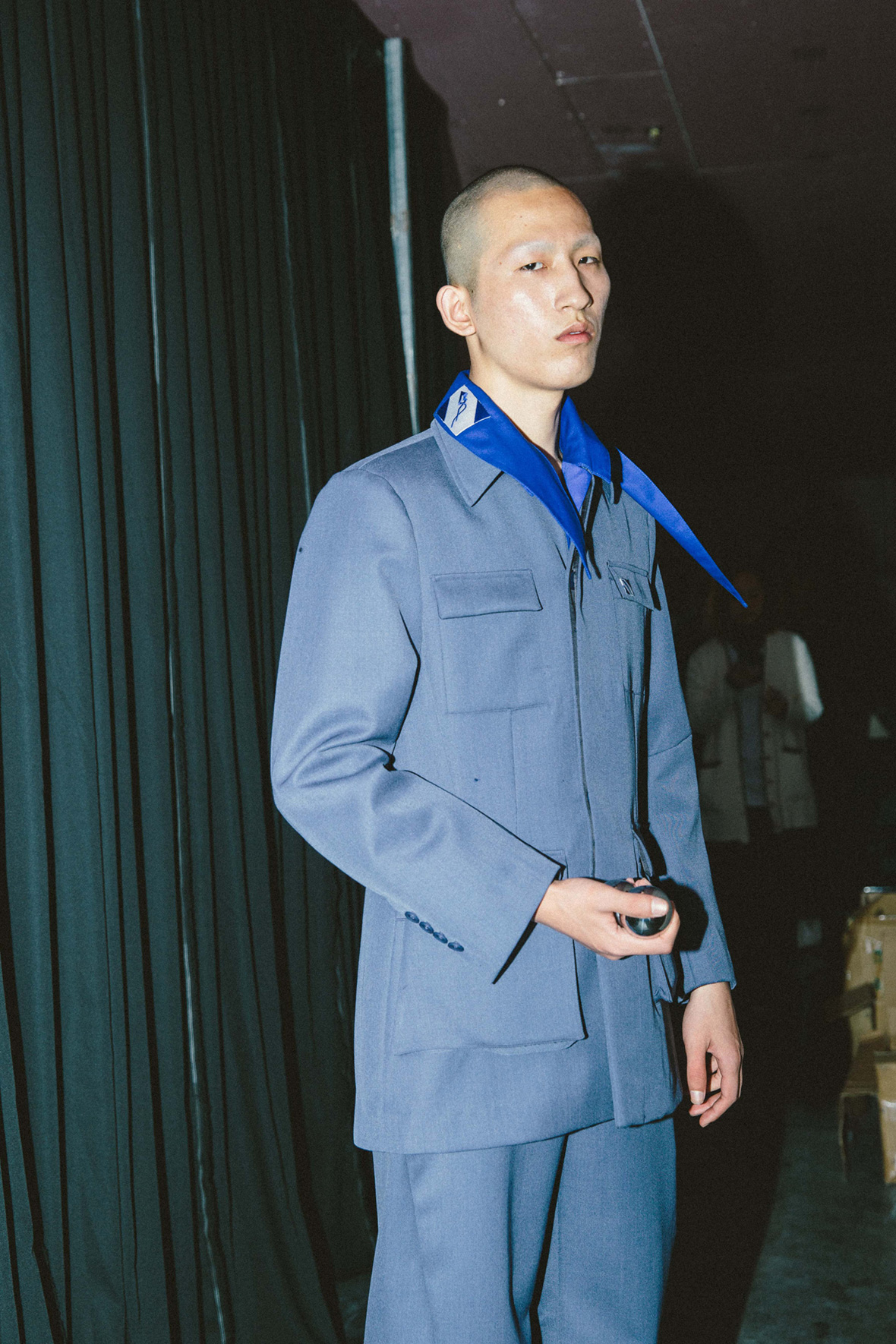 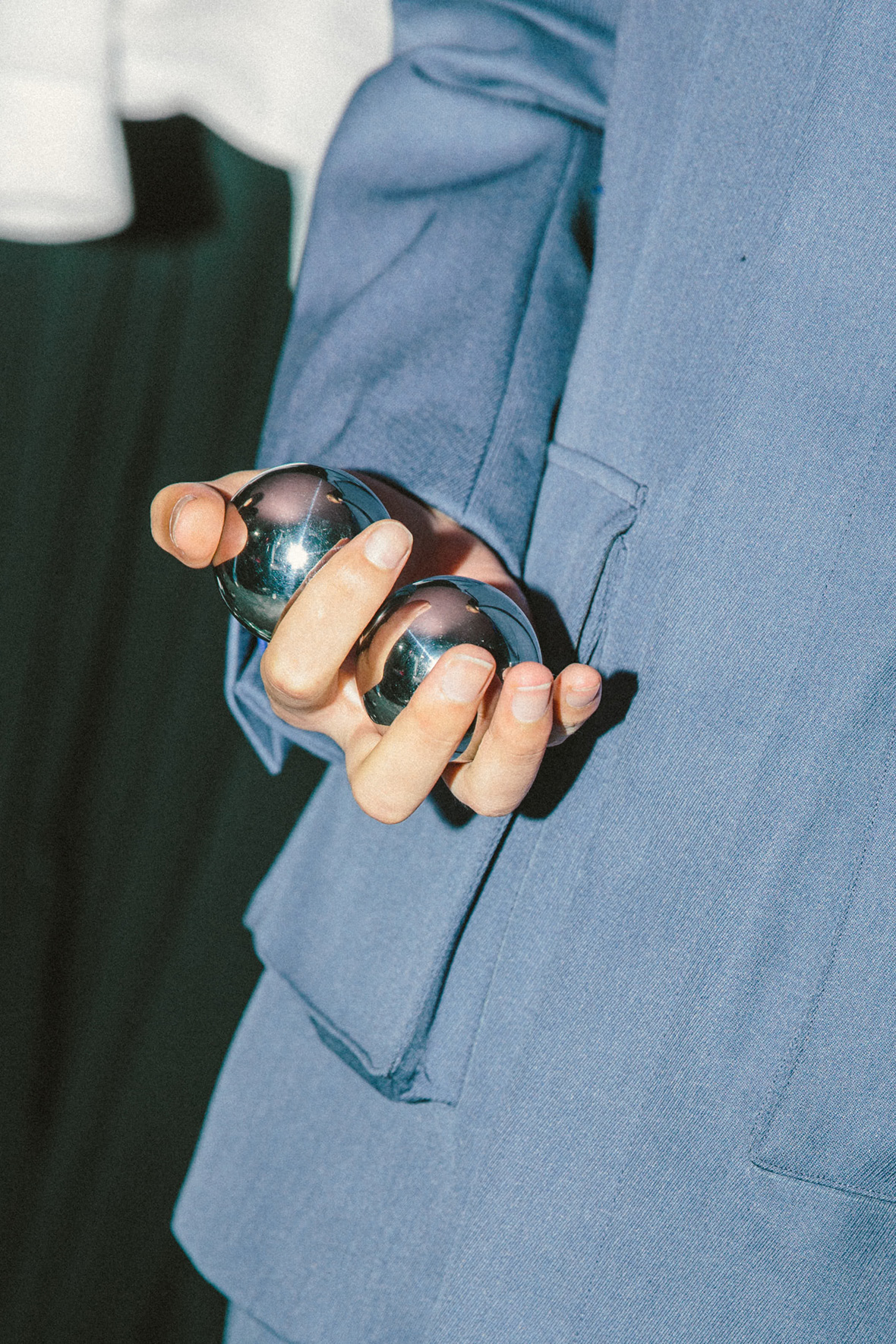 XIMON LEE is a fashion label founded by Korean Chinese designer Li Dongxing. At the age of 24, Li became the first menswear designer to win the H&M Design Award and make it into the semifinals of the LVMH Youth Design Competition.

Li’s parents are from Daegu, South Korea, while he was born in Heilongjiang, China, and his formative years were spent between Beijing, Shanghai, and Hong Kong. He studied in New York, graduating from the Parsons School of Designs before moving to Berlin where he’s now based. These multicultural experiences have gifted him with an appreciation for cultural diversity, which has allowed him to produce refreshingly unexpected designs season after season. 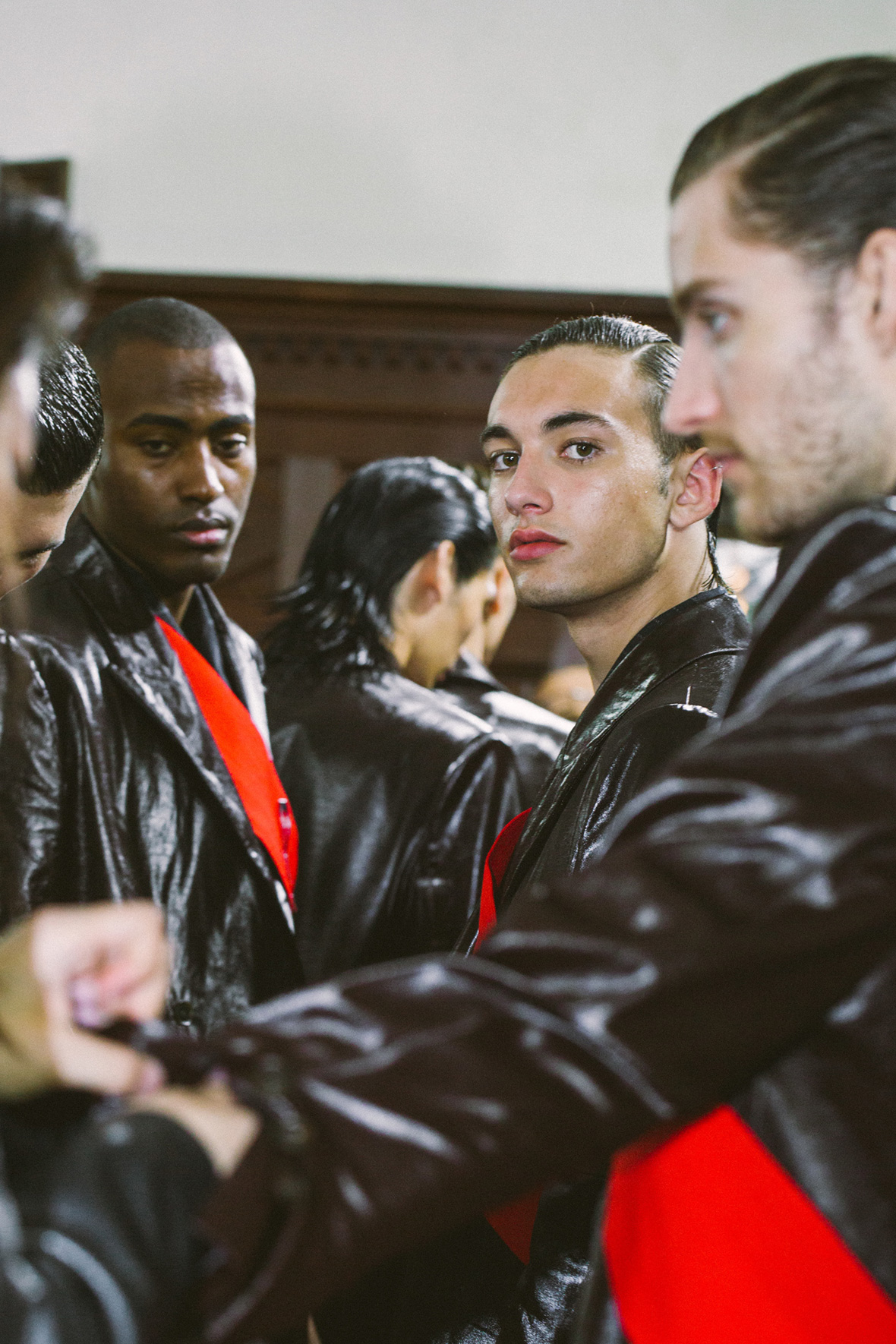 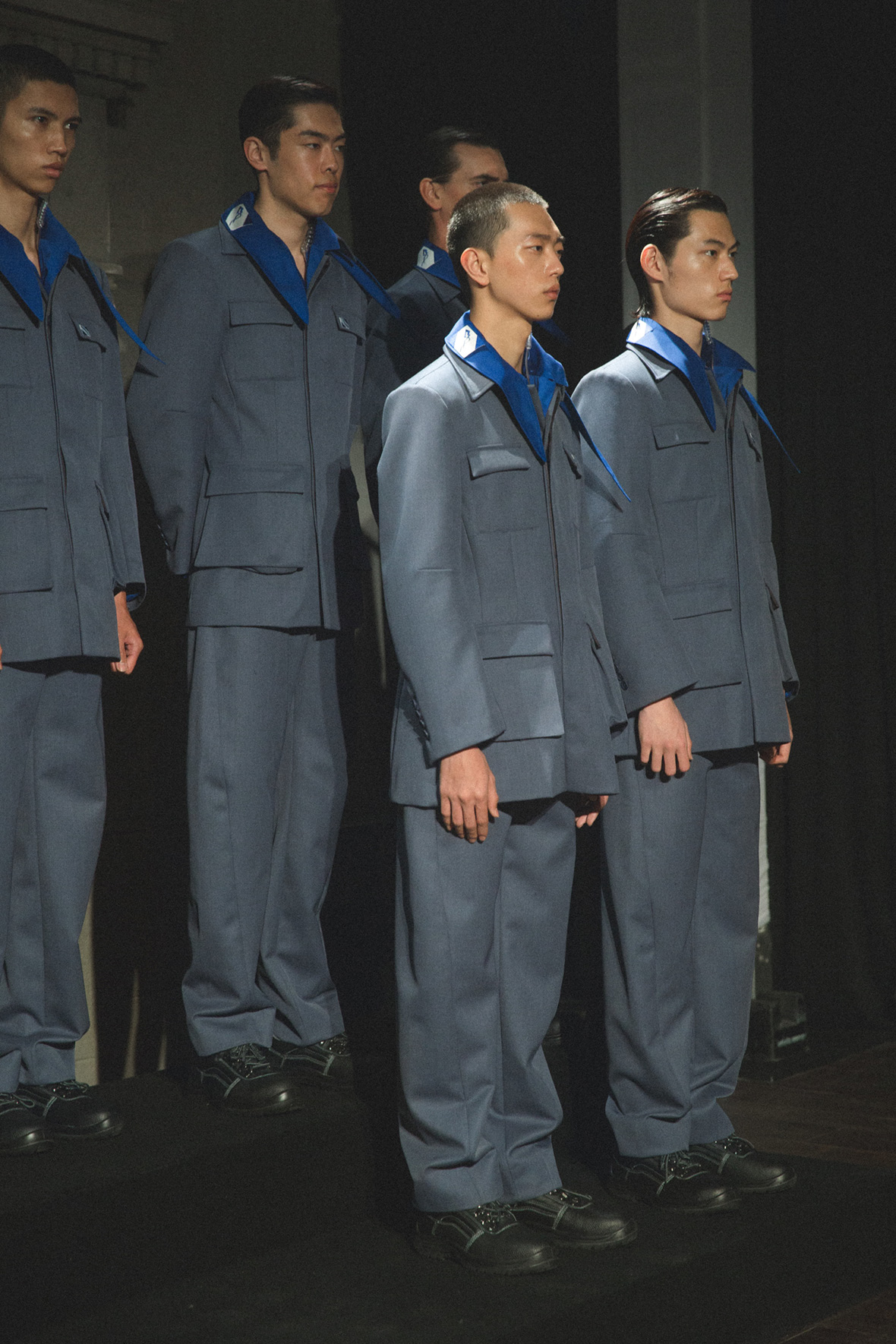 Li’s talent lies in his ability find inspiration from unlikely sources: the 2005 documentary The Children of Leningradsky, bodily shame, mass production culture, and now nihilism and idealism. While each collection is unique in their own right, they share commonality in that they’re all methods for him to offer his commentary on modern society. His avant-garde shows are a marked departure from the extravagant consumerism that’s often celebrated at deafening volume in today’s fashion world. What Li offers is an untainted creative vision that cuts through the noise. 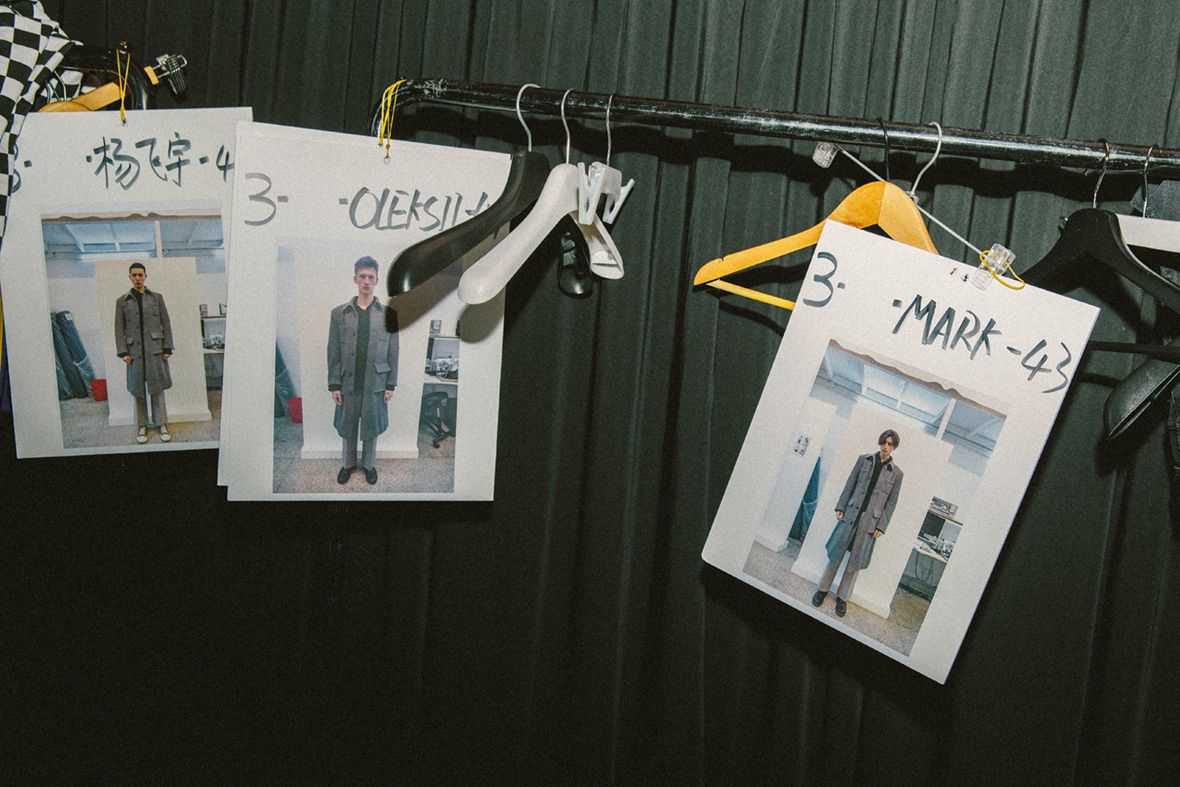