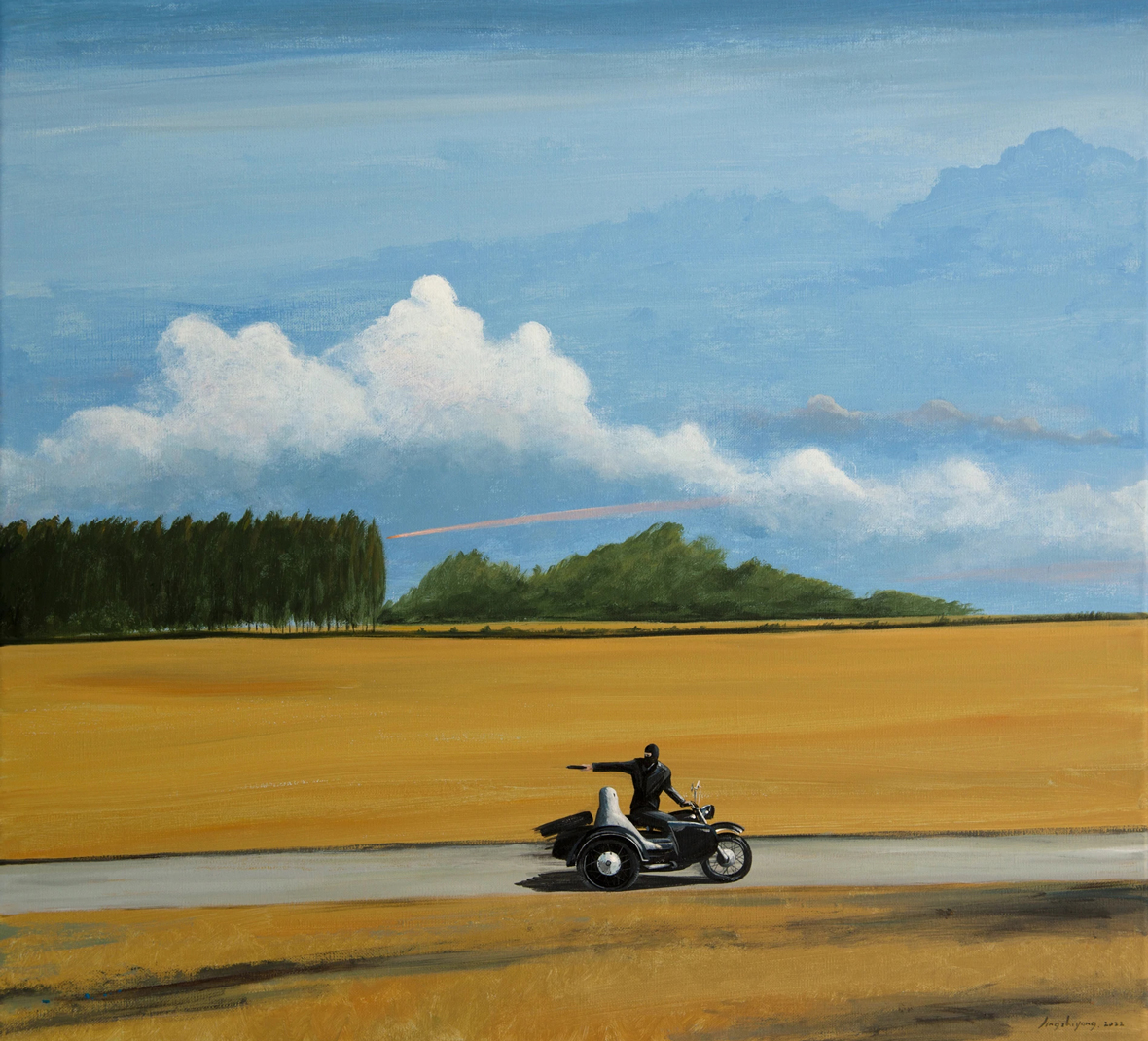 Sigmund Freud believed that dreams were a form of wish fulfillment, an altered reality designed by the unconscious mind. Despite how absurd that some dreams may be, it’s believed they’re ultimately rooted in truths. The works of Tianjin-based artist Jing Zhiyong treads deep into his personal dreamscapes as he seeks to uncover their deepr meaning. In these visions, a Coca-Cola vending machine sits on the moon; a rifle-wielding man walks beneath the night sky, half of his body engulfed in flames; and a violent spray of blood covers the side of a white barn, yet the blue skies above and the undisturbed snow of the foreground instill a calming quiet. On his canvases, these seemingly paradoxical images come together to evoke a sense of danger, loneliness, and grace all at once.

Much like how the dreams that leave an impression are typically either the sweetest or the most horrific, Jing’s works is a masterclass in contrasts. Take for example, Rainbow Six, an acrylic painting depicting a peaceful countryside vista. The quiet landscape is interrupted by the appearance of a masked gunman escaping on a motorcycle, pistol in hand. In the sidecar, a bedsheet-donning ghost rides shotgun. This type of juxtaposition defines most of Jing’s paintings—an impending threat disturbing the otherwise serene environment.

Jing Zhiyong notes that these contrasts aren’t exactly intentional though. His approach to art making is largely intuitive, an expression of his own emotional states. But this output often shares parallels with his dream states, in both volatility and theatricality. 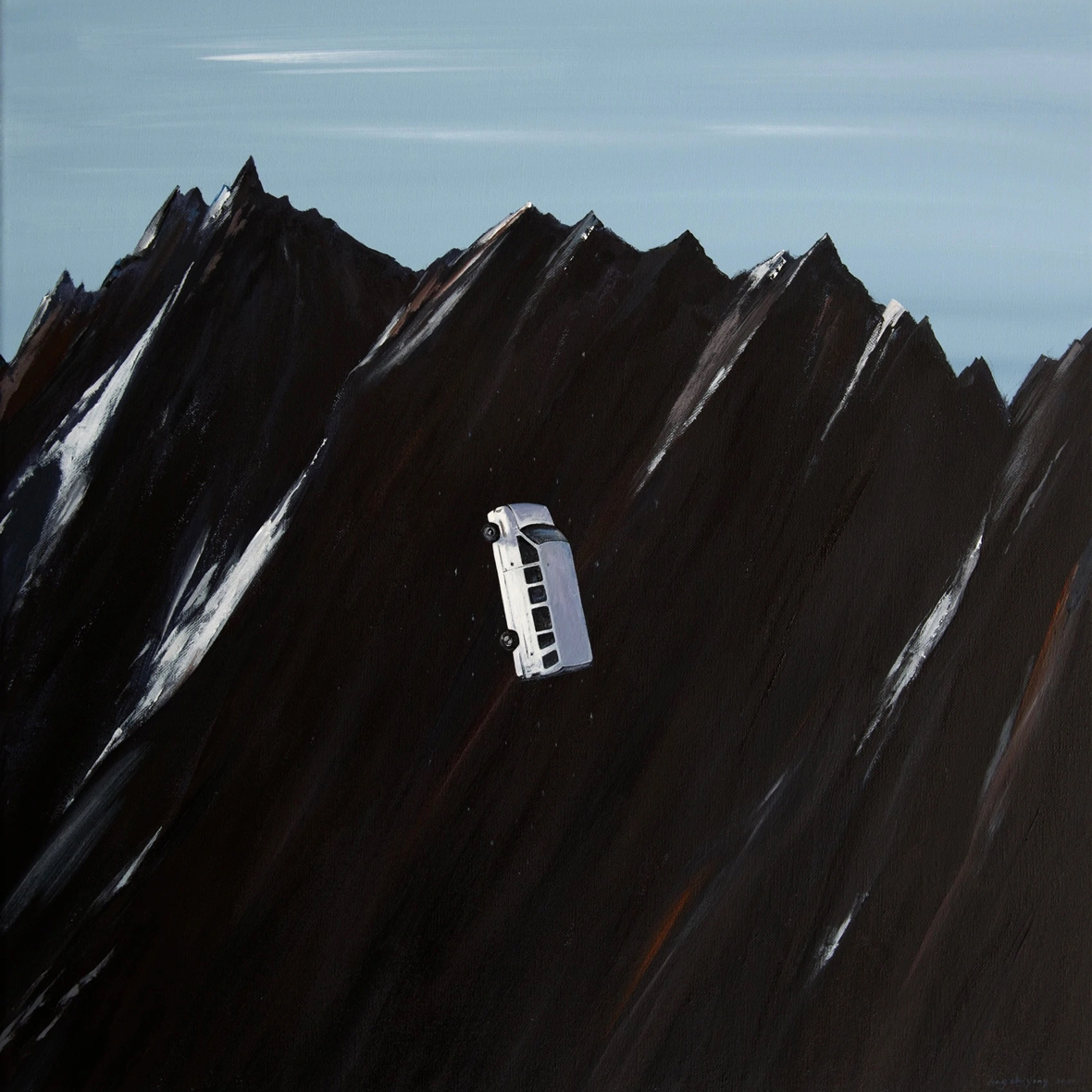 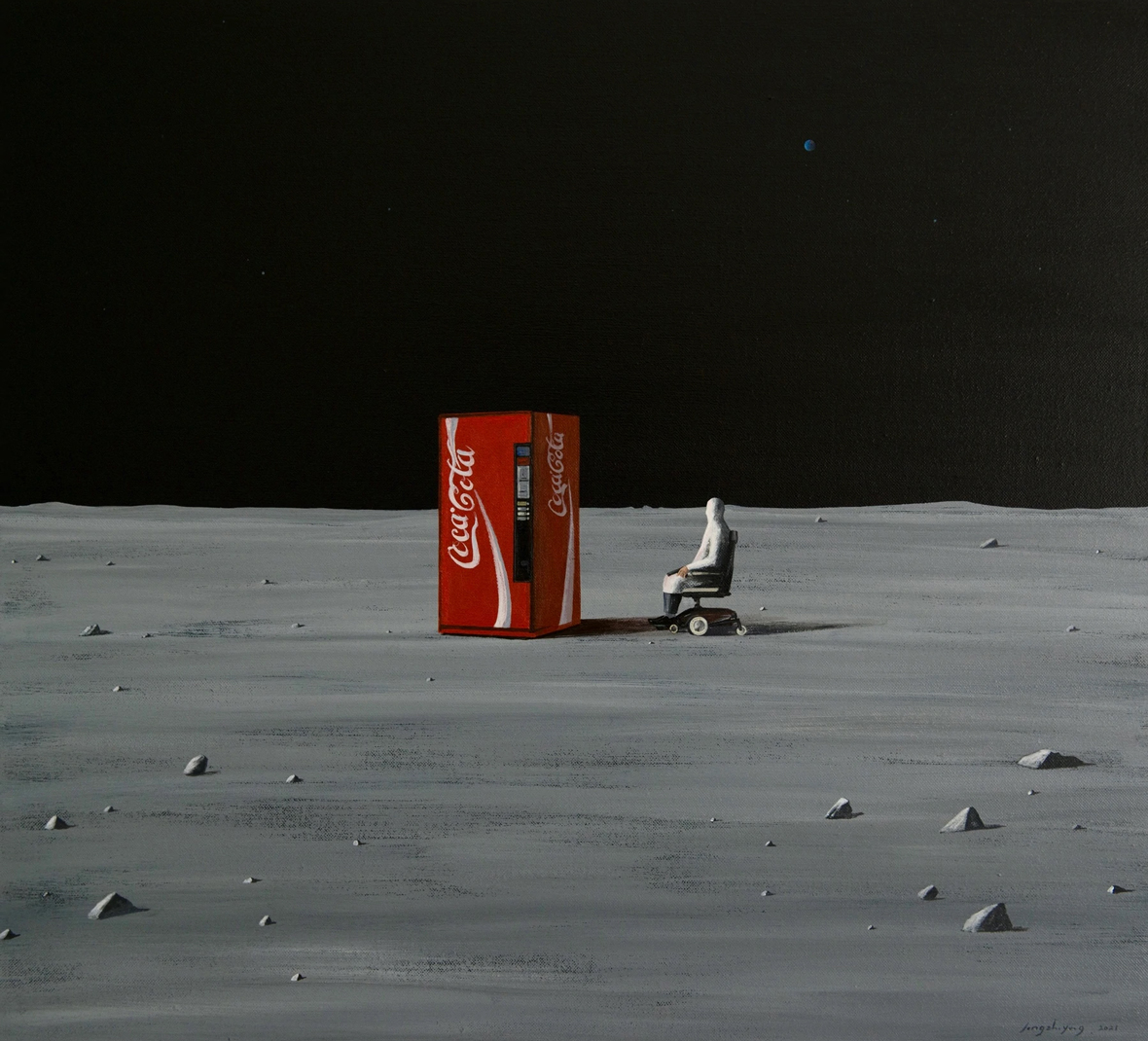 Another recurring element of Jing’s work is the use of scale. The main characters of his canvases typically appear minute within the scene, resulting in an unmistakable sense of isolation. This feeling of solitude is a theme that Jing relates to his childhood experiences as well as his observations of the current generation.

Growing up, the loss of close family members resulted in feelings of insecurity. Demeanor-less ghosts, firearms, and spectral shadows plagued many of his childhood nightmares—these same motifs now populate his canvases. “They’re not symbols of violence,” Jing explains. “These visual cues are more emotional in nature, tied to my sense of attachment.” The ghostly figures symbolize different matters depending on the context. On certain paintings, they represent his inner self. On others, they represent family members who’ve departed from the mortal coil.

The characters who appear on Jing’s canvases are also almost always turned away from the viewer. Some wear disguises while others cover their faces with items such as books. This is by design, a way of commenting on the powerlessness and silence of people when they’re faced with harsh realities. As Jing sees it, we’re living in an era of estrangement. The online world has caused a fissure between people in our offline existence. “As mankind progresses, the lonelier we become,” he says. “Technology is accelerating this sense of loneliness. The internet is giving people a false of sense of interconnectivity, when in reality, we’re the most divided we’ve ever been.”

Despite this bleak outlook, Jing doesn’t necessarily want his art to project negativity. The isolated characters of his canvases are typically shown in beautiful environments. There’s a sense of hope that prevails above all else. 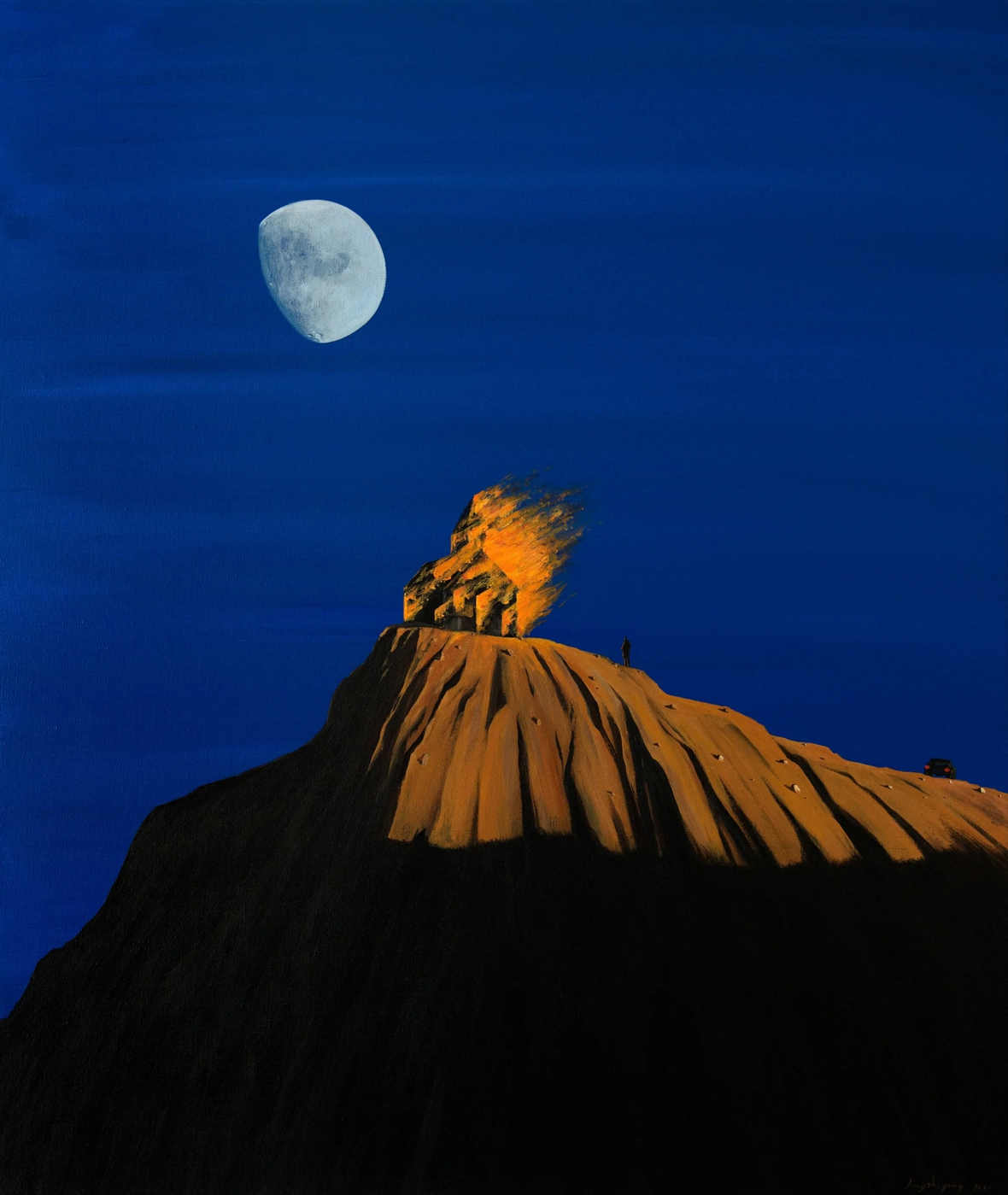 Jing also cites montages, a film-editing technique in which short shots are sliced together, as a source of influence for the non-linear narratives he works with. In some ways, Jing’s canvases remind of the camerawork of cinematic legend Wim Wenders, in how empty scenes can be imbued with meaning. Alfred Hitchcock is also a source of influence, in the ways that Jing plays with suspense. “Whether it’s films or tidbits from my personal dreams, I want my paintings to give these fragmented visuals a more cohesive shape,” he says. “The stories of my work are purposefully non-linear. In fact, they’re malleable—they may change on a whim based on my own thoughts and feelings.” 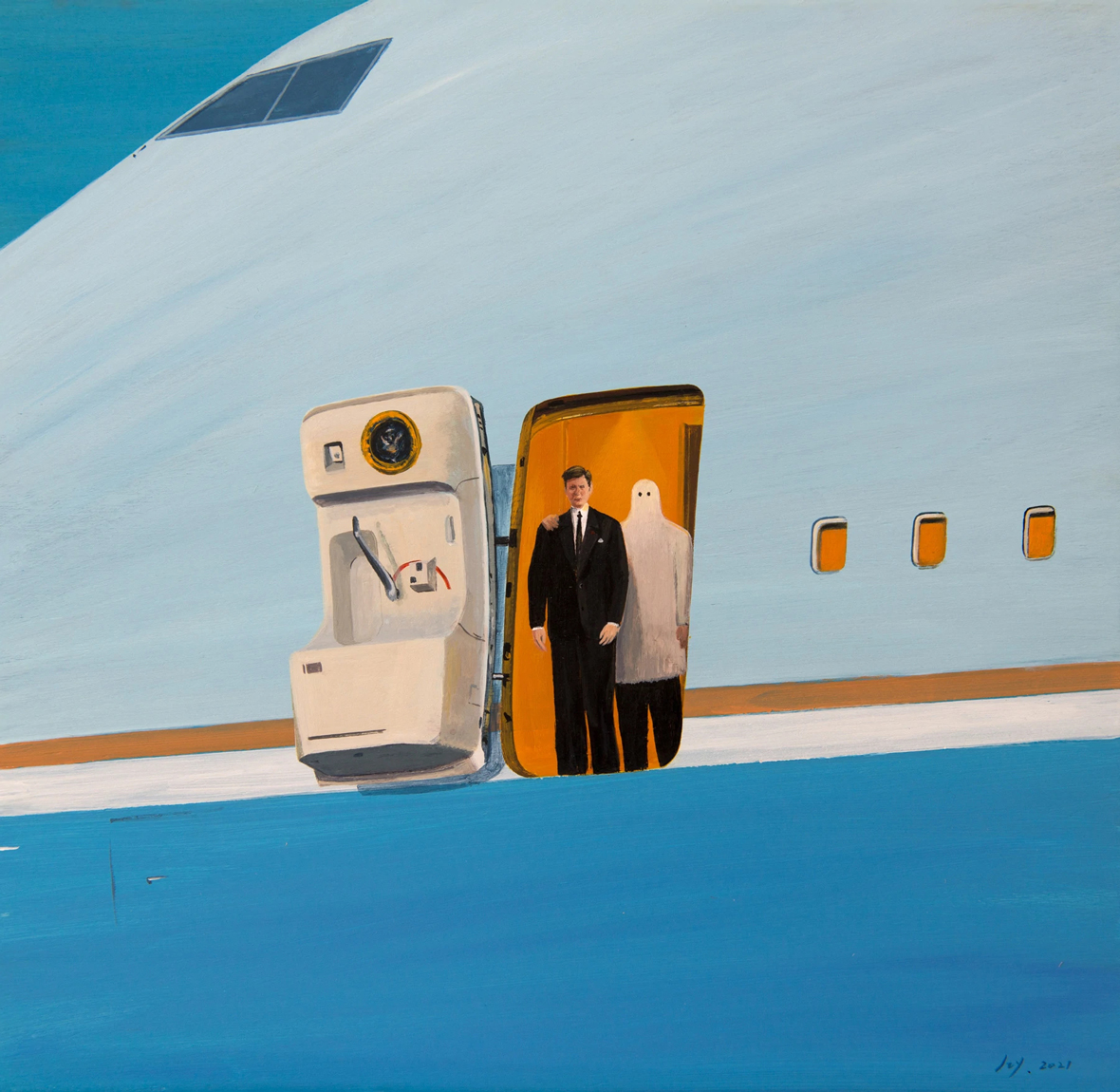 No matter how strange some of Jing’s paintings may appear, there’s comfort and peace to be found. His works captures the fickleness of life and of our unconscious mind, reveling in the beauty that can be found when you keep an open mind and a humorous outlook to it all.

Jing is currently working with G Art Gallery to throw a new exhibition in Hong Kong where 30 to 40 of his paintings will be on display. The show will be open to the public around mid-July; you can learn more about it here. 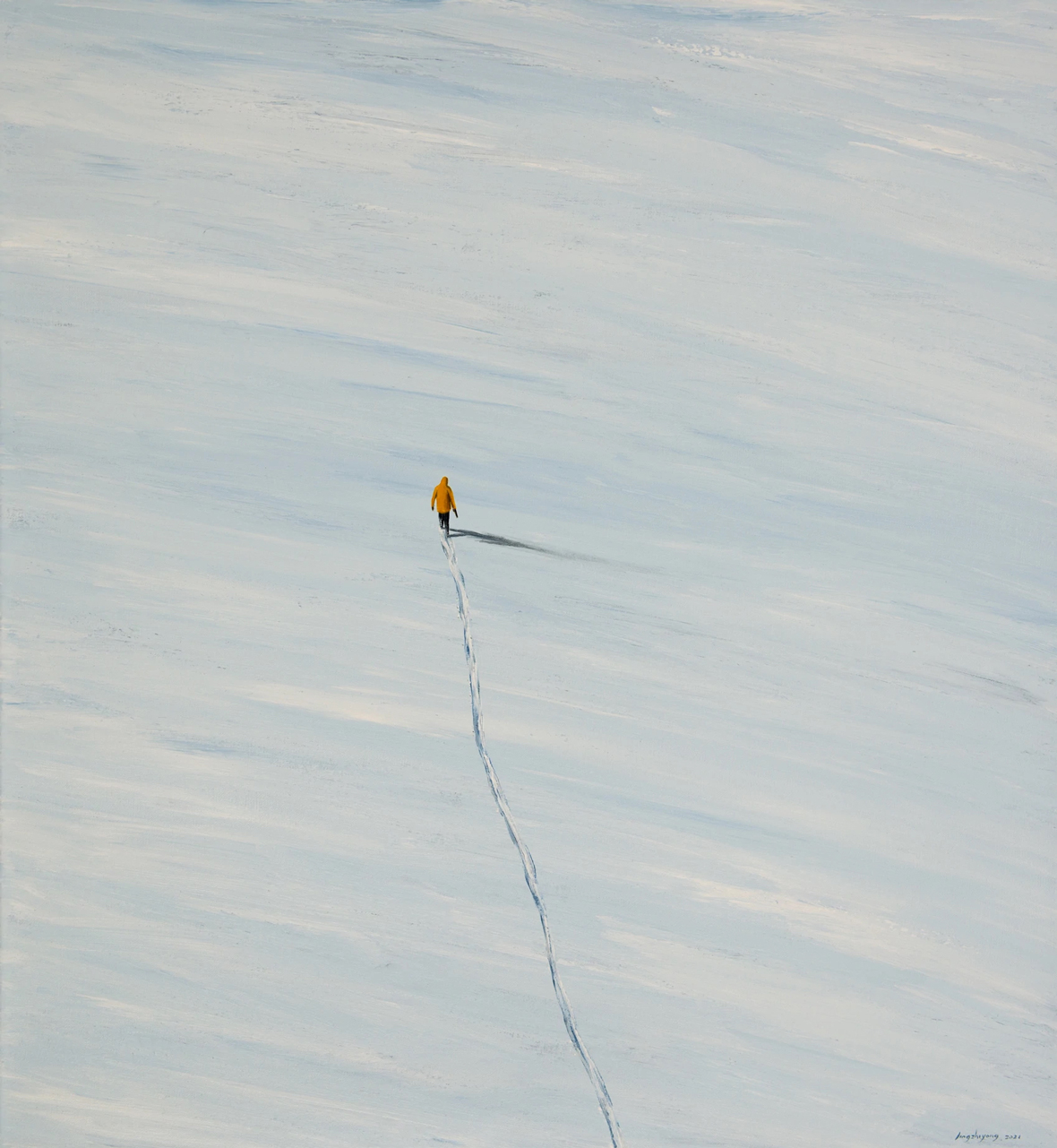