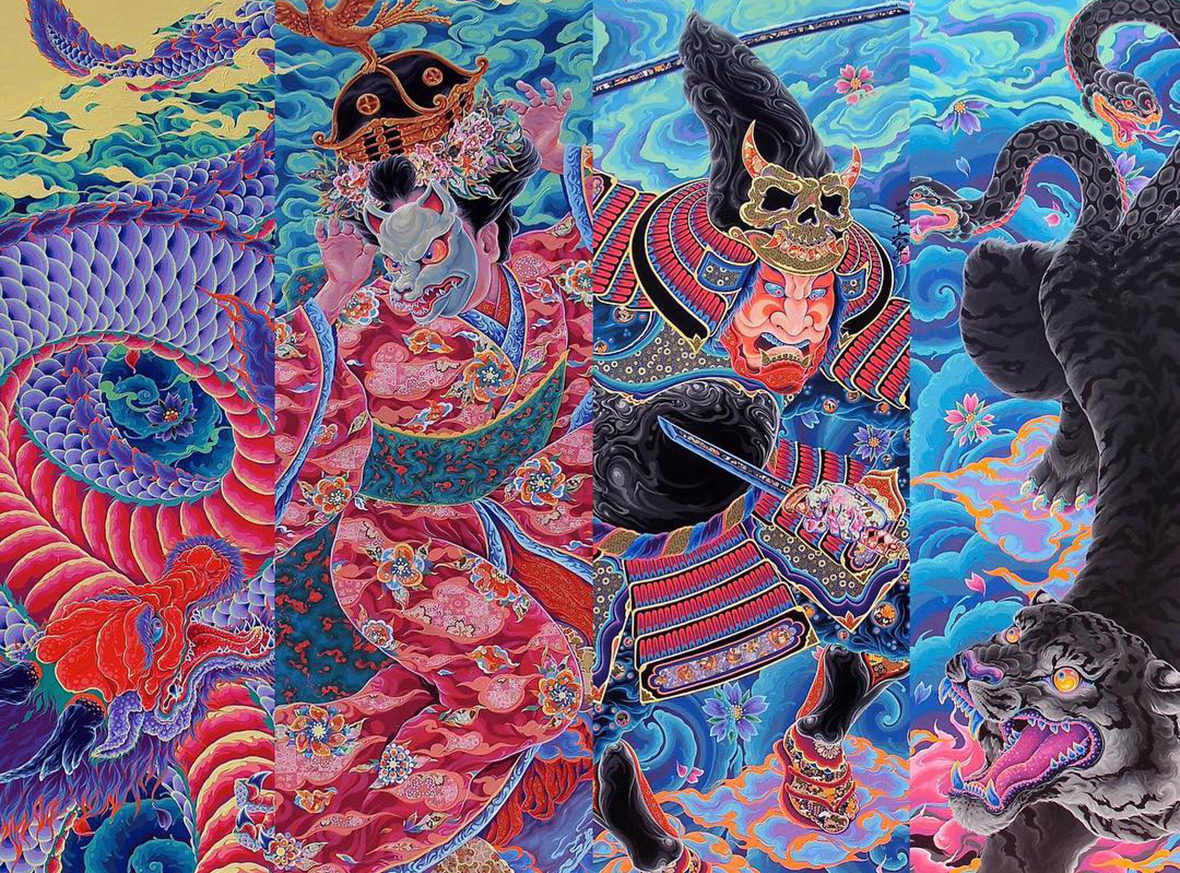 There aren’t a lot of commonalities between Japanese and Mexican culture. In fact, most people would even consider them to be polar opposites, especially when it comes to each country’s art traditions. Just take for example, the preferences towards color. Traditional Mexican art, such as alebrijes sculptures and huichol beads, are defined by bombastic colors. Meanwhile, traditional Japanese art, such as ukiyo-e painting or woodblock prints, colors are much more understated. Despite these glaring differences, the two cultures somehow mesh like old friends in the works of Japanese artist Kenta Torii. 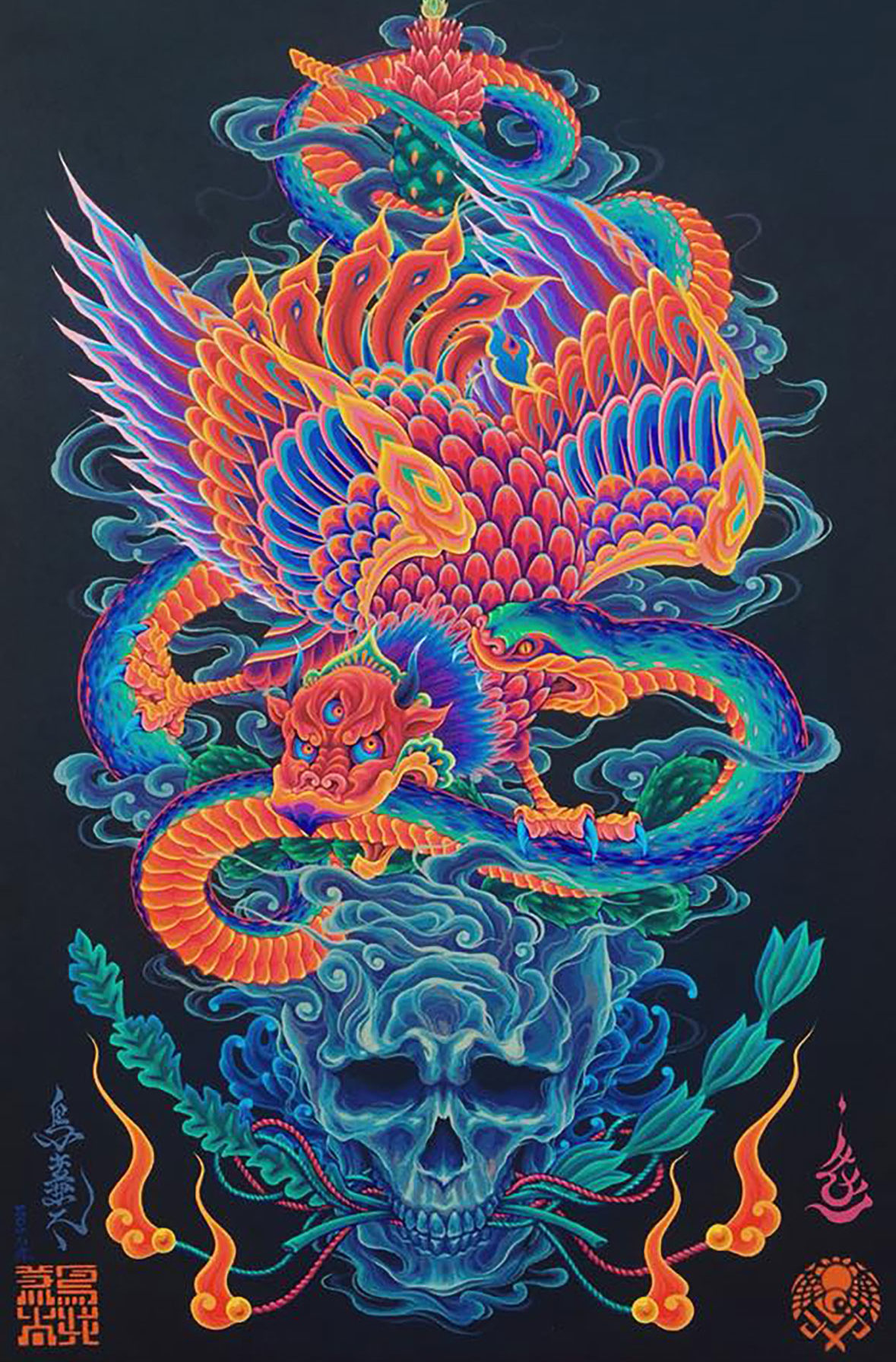 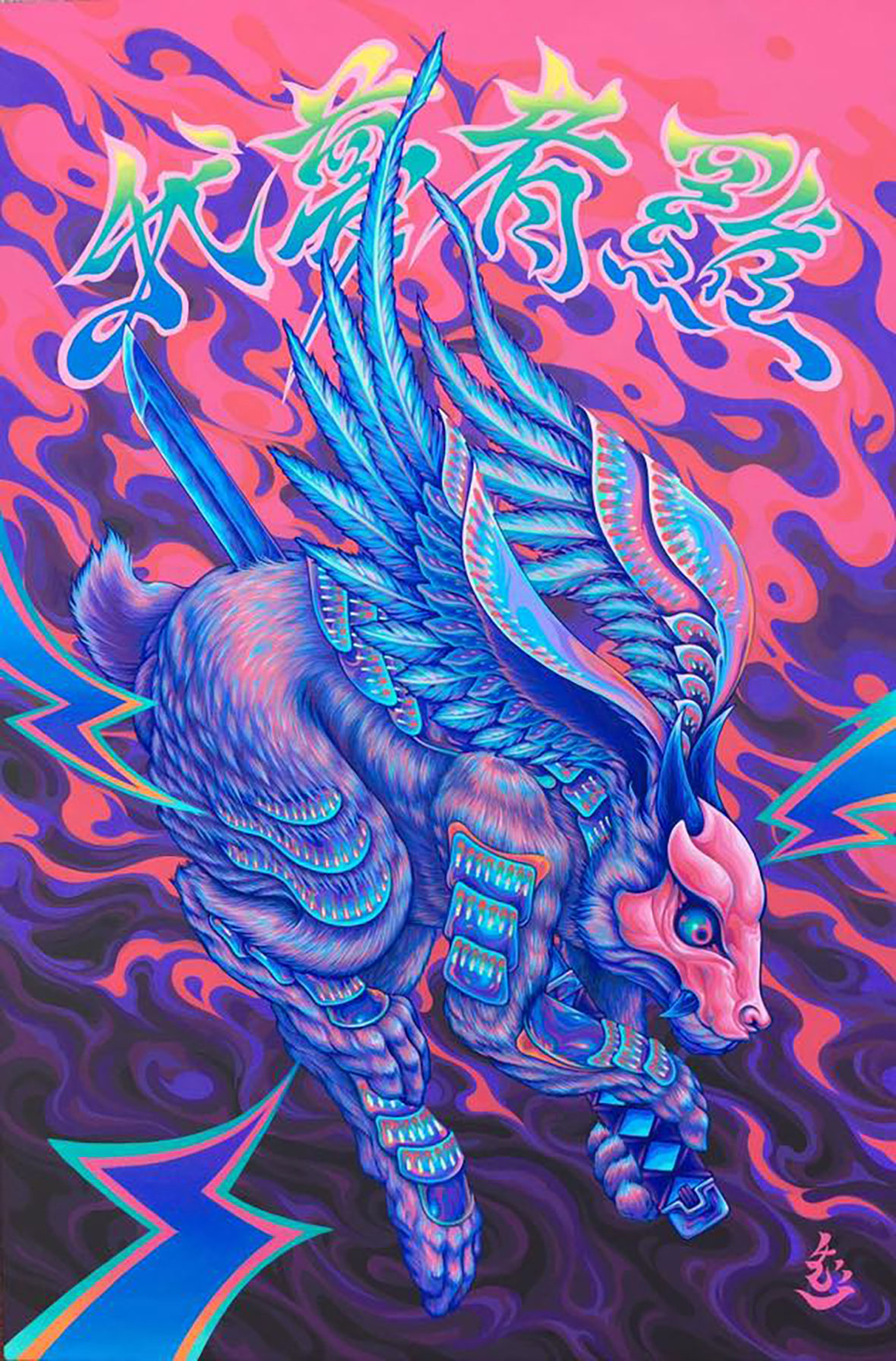 In 1999, Torii was interested in art, but it wasn’t his primary passion—instead, he had aspirations of becoming a professional soccer player, and these ambitions took him to Brazil. There, he fell in love with Latin-American art and culture. In 2001, he moved back home to Japan, where he dedicated himself to studying art. However, for such a free spirit, the rigid structure of an academic curriculum just wouldn’t do. He decided to leave Japan in 2005, and experienced the art scene in New York before deciding to head further south, to Mexico, and see how the Latin-American culture that he fell in love with almost half a decade back differed there.

He lived and painted for a full year in Mexico before moving back to Japan again. However, in the place he thought to be home, he felt strangely out of place and creatively stifled. It didn’t take long before he made the decision to move to Mexico for good, and today, Torii has proudly called South America home for over a decade. 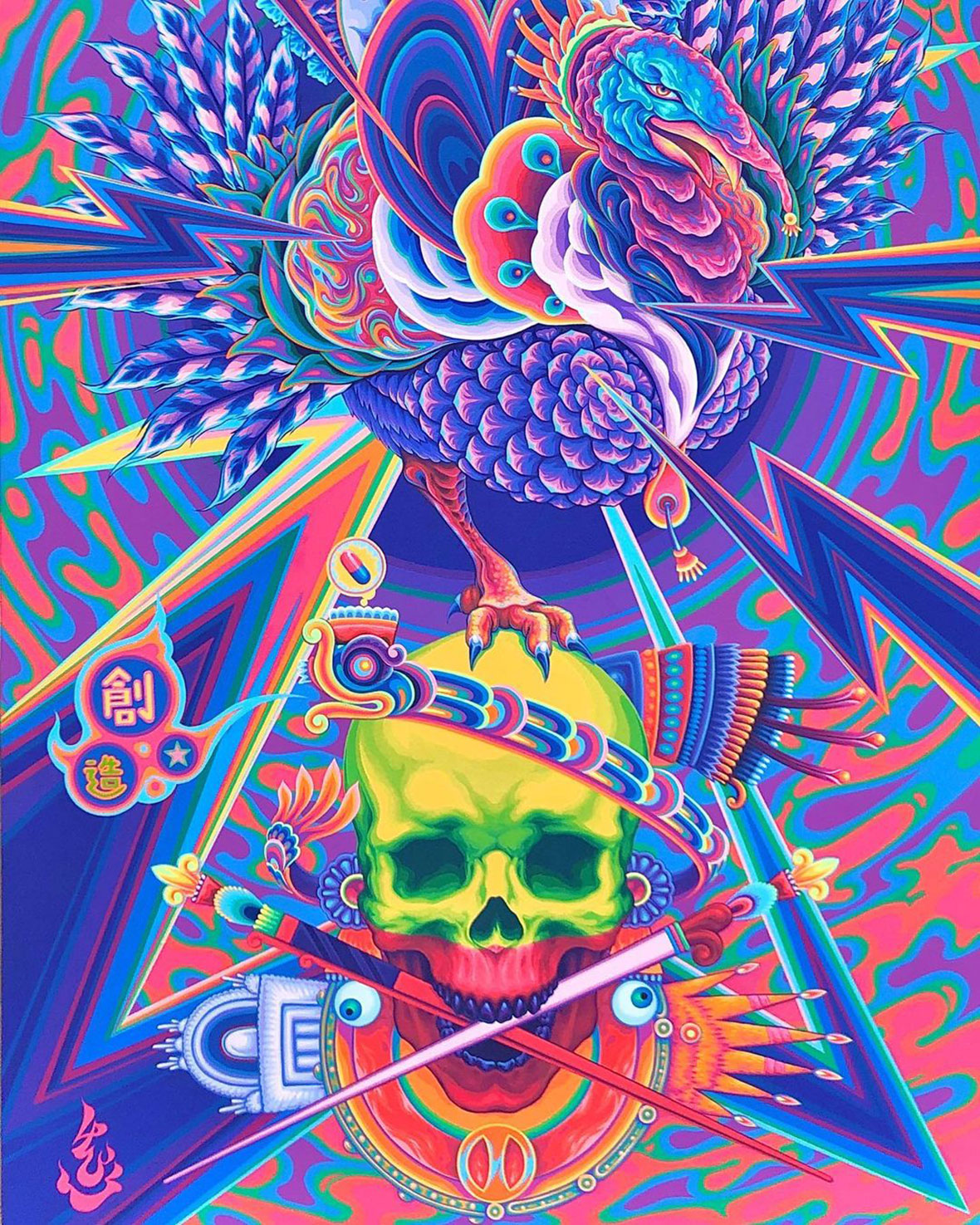 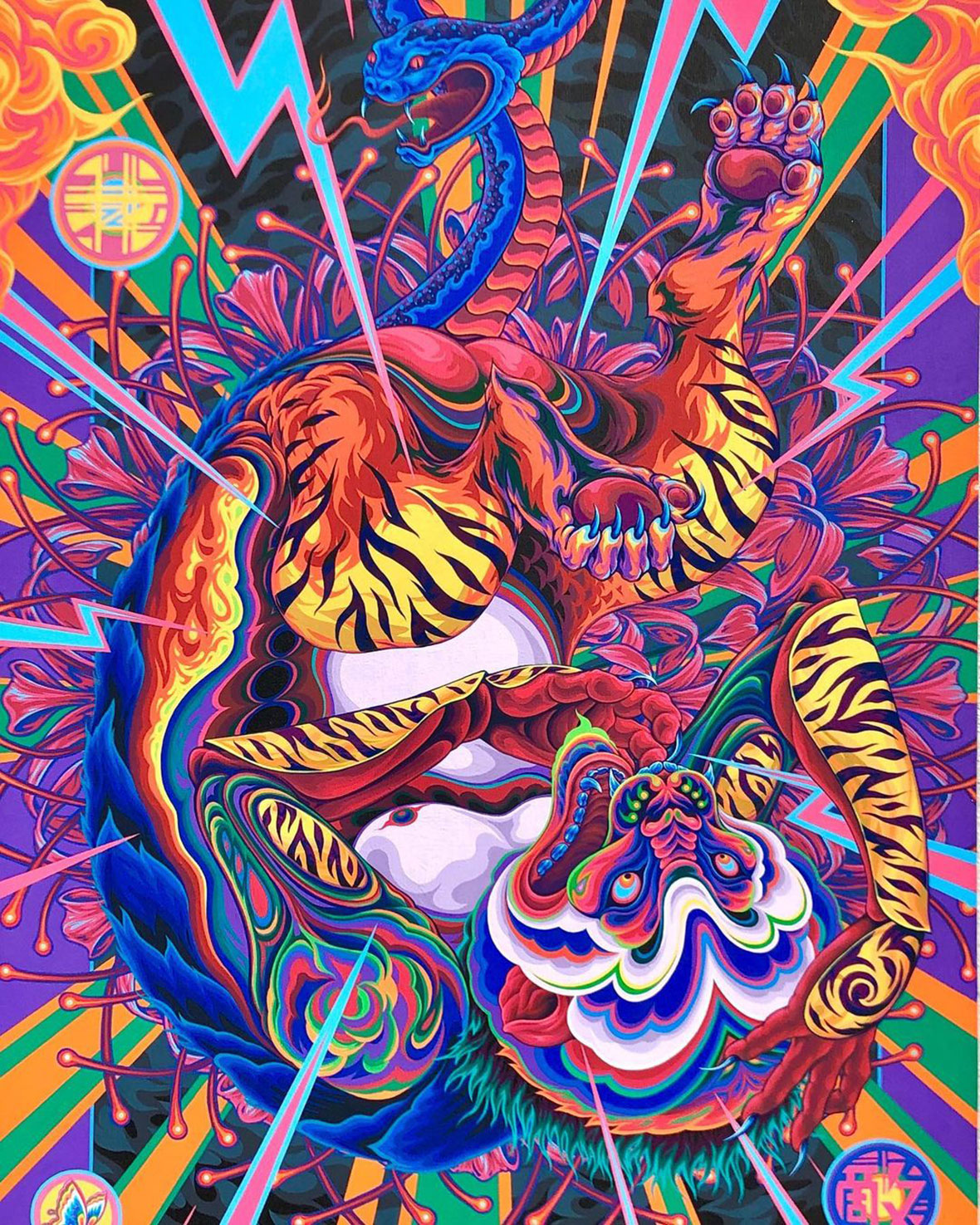 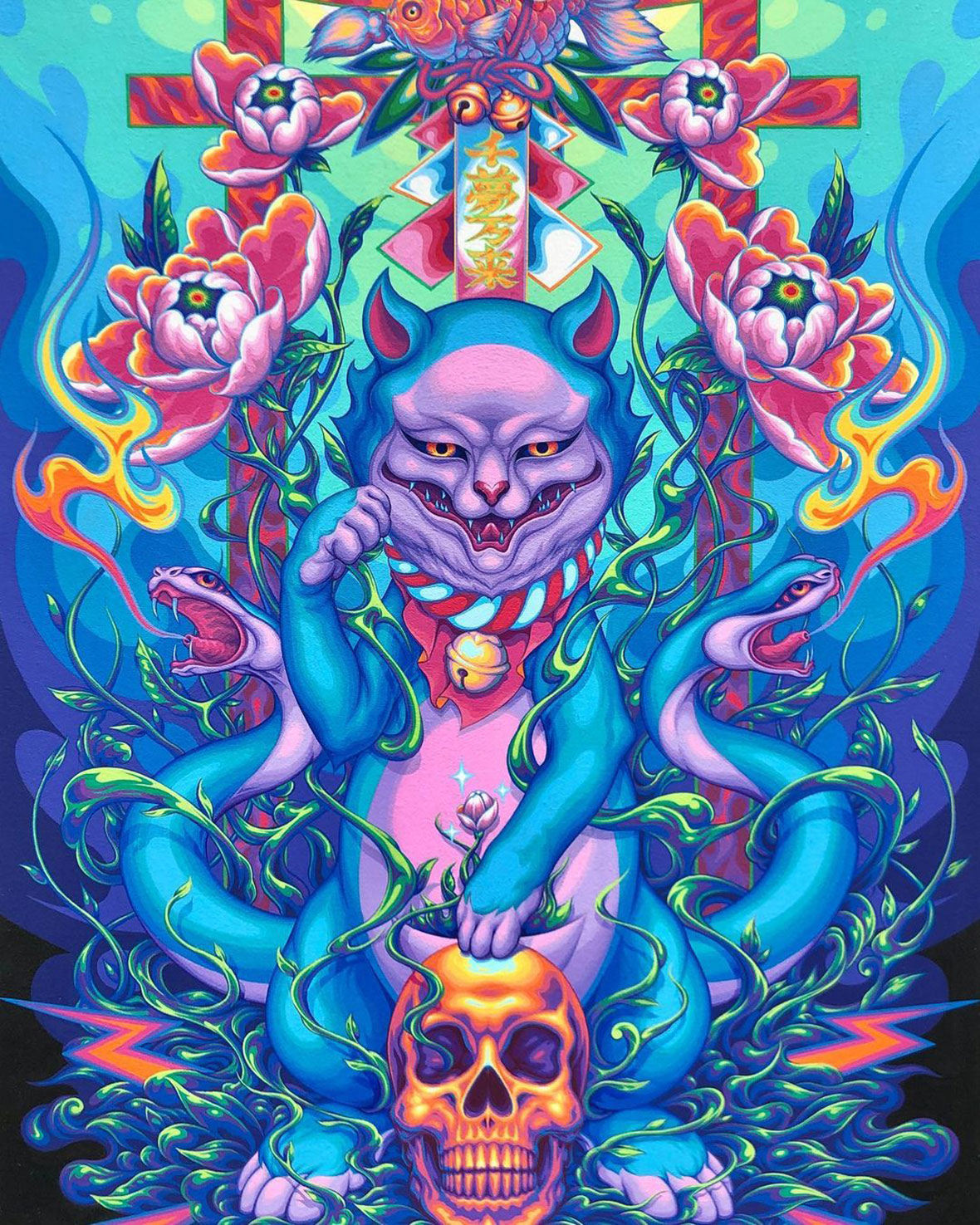 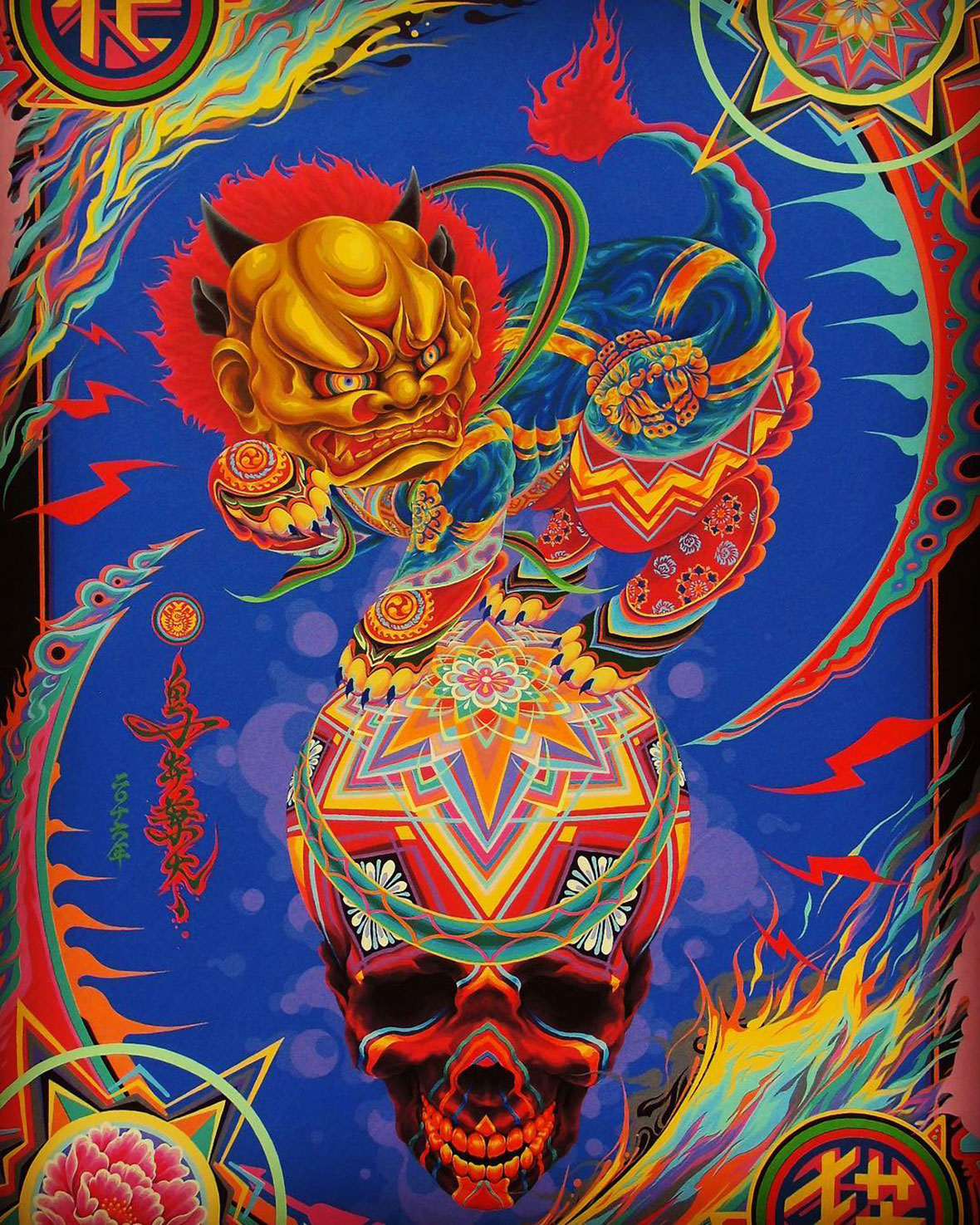 Torii’s passion for Mexico and Latin-American culture now shines through in his artworks. The vivid colors he employs evoke the bombastic palettes of Mexican folk art, while busy patterns evoke the shapes of papel picado fill the negative spaces of his canvases, and other Mexican cultural nods, such as Aztec headdresses and Day of the Dead sugar skulls, abound his compositions. Not all of these elements may be consciously included but its undeniable that his exposure to Latin-American art has influenced his artistic mindset. “There are many interesting aspects of Mexico, and I want to create art that celebrates them through my own methods—as someone born in Japan and living in Mexico,” he says. 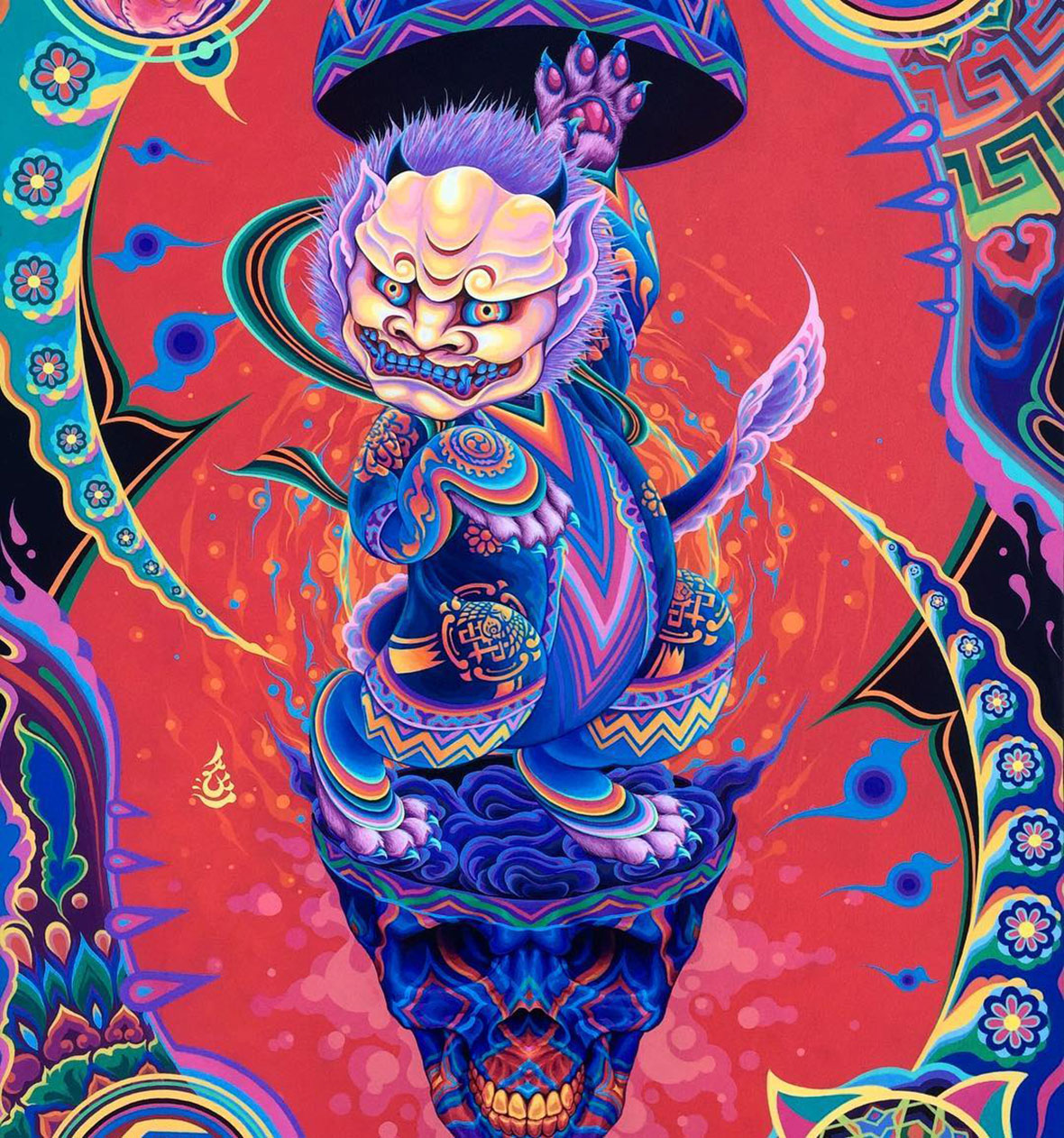 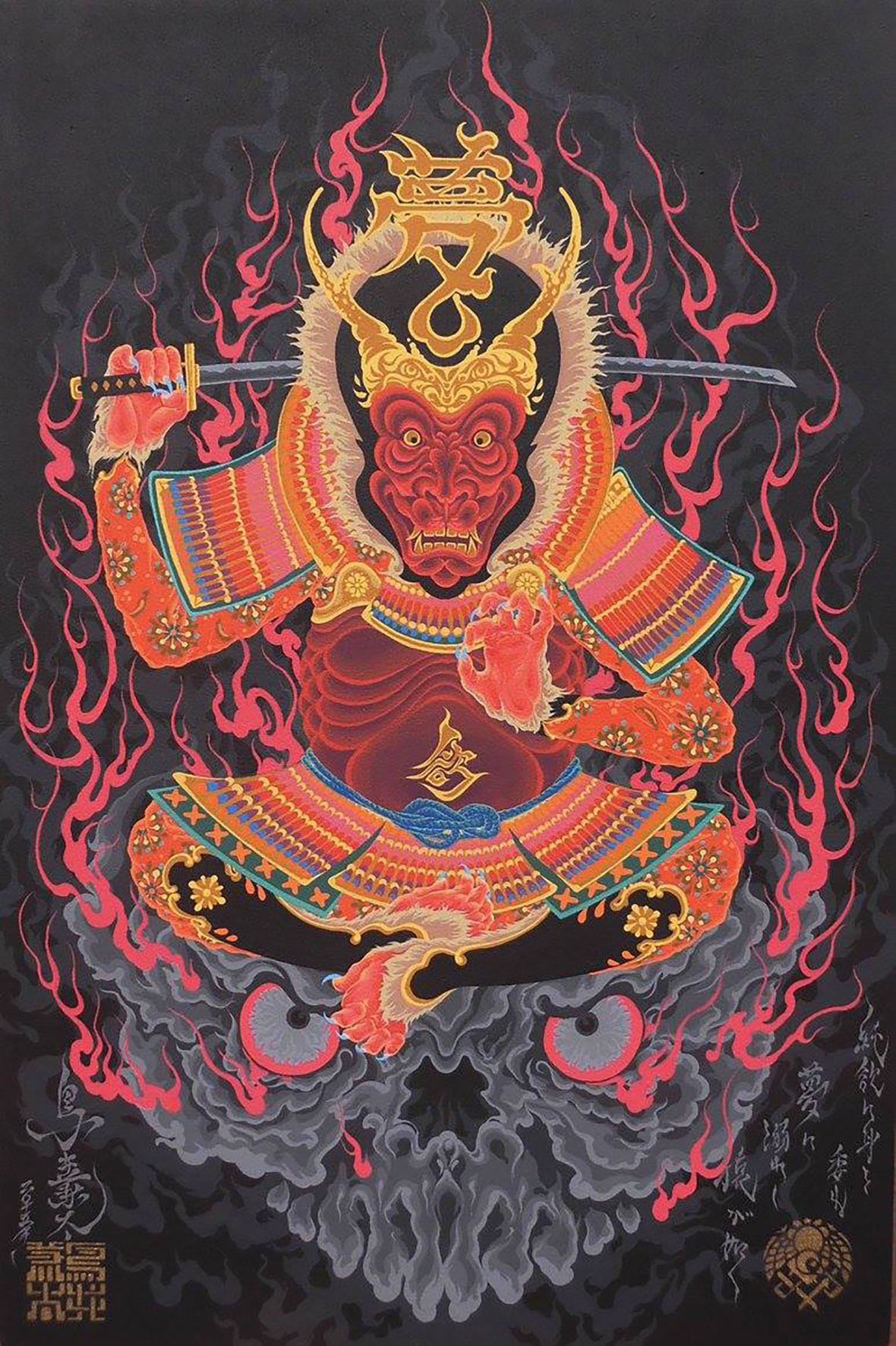 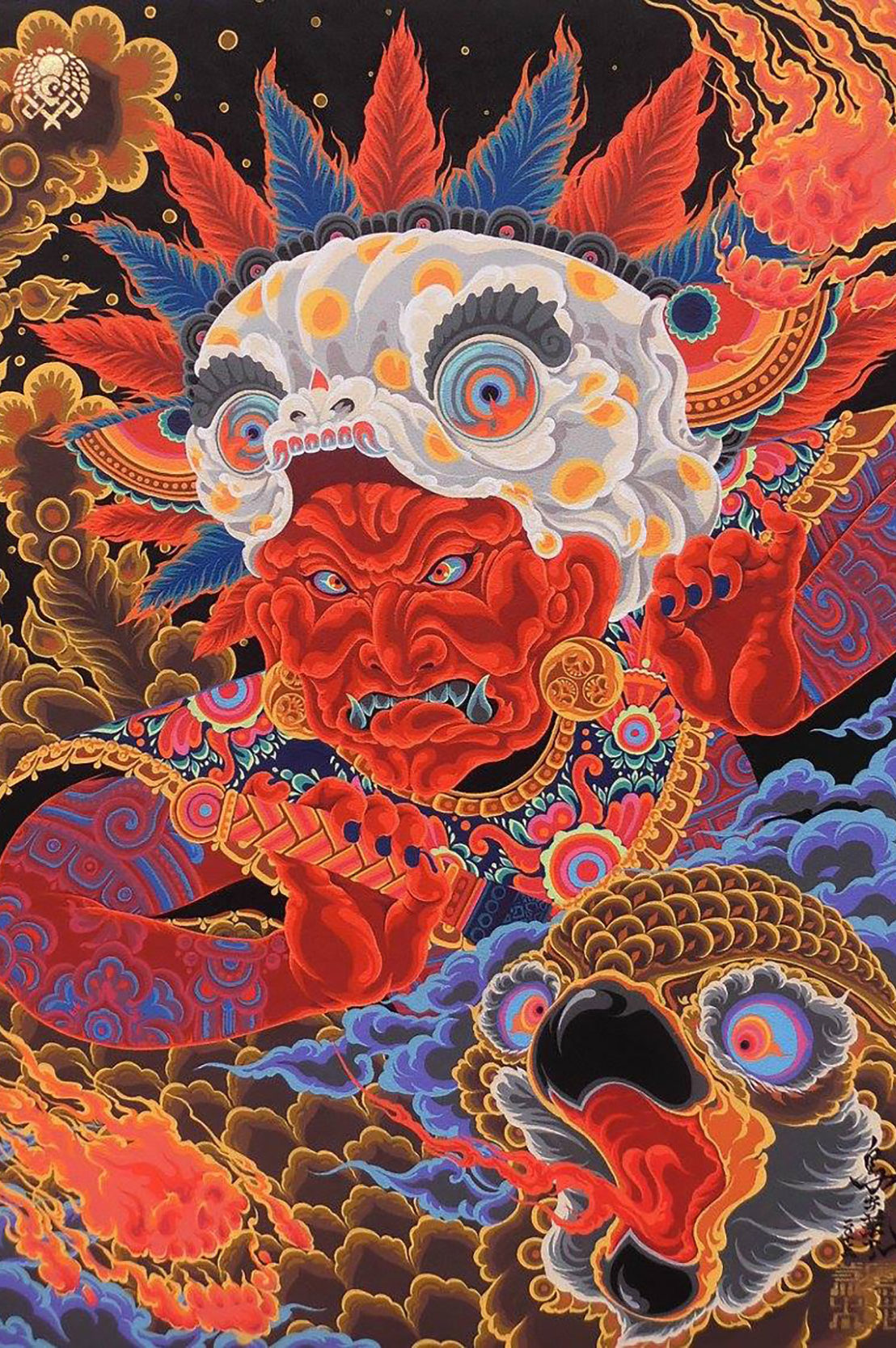 Kenta’s Japanese heritage is also front and center in his art. Motifs such as lion-dogs and samurai armor exist alongside his homages to Latin-America. Take for example, in one piece, a Japanese monkey wears a tengu mask fused with an Aztecan headdress. Though these traditional themes are all presented through a contemporary style defined by pops of neon colors and street art influences, their cultural origins are unmistakable. “I probably don’t know as much about the Japanese art world as I should,” he laughs. “But I respect Japanese artists, and whenever I feel lost, I’ll return to my Japanese roots to discover new direction.” 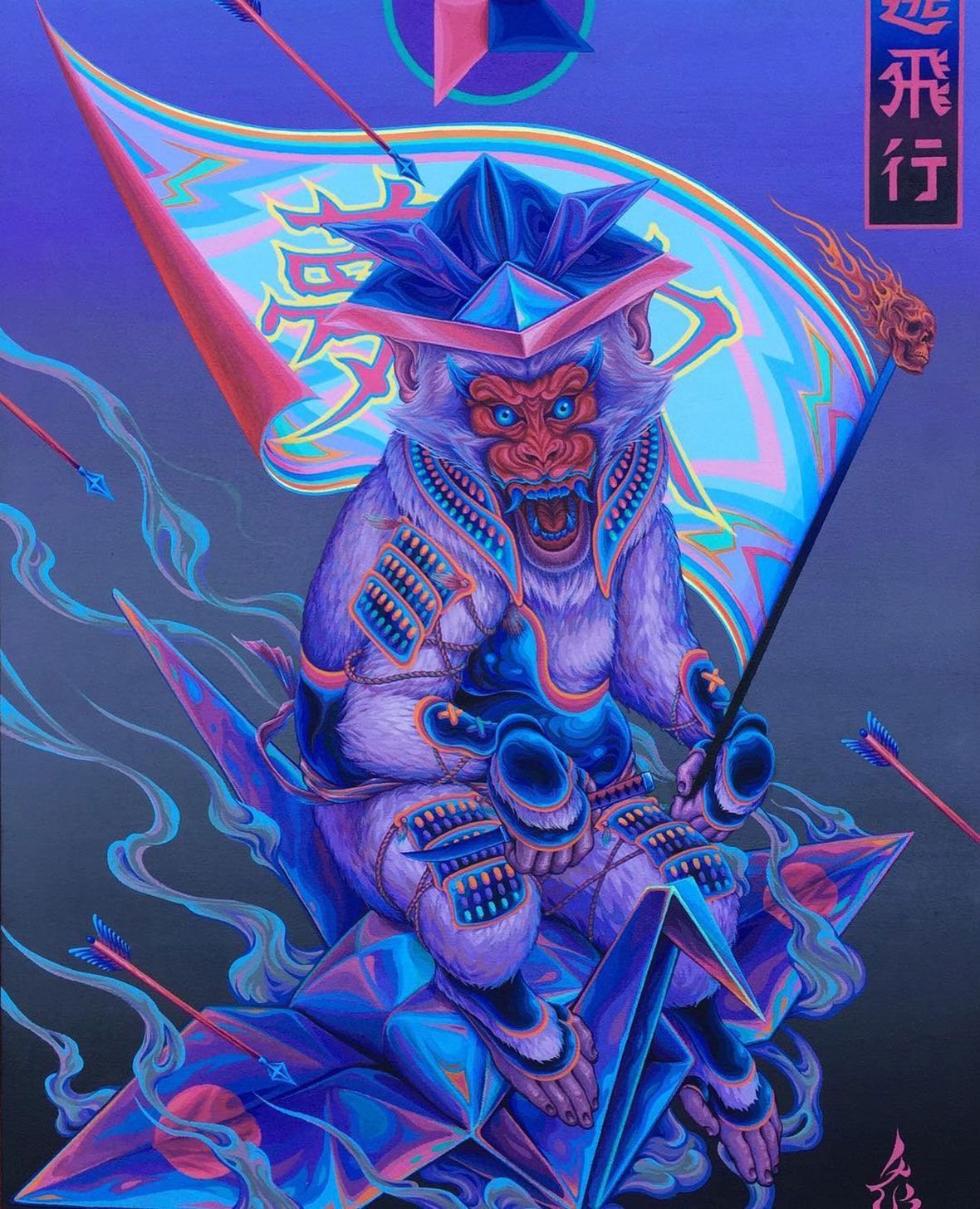 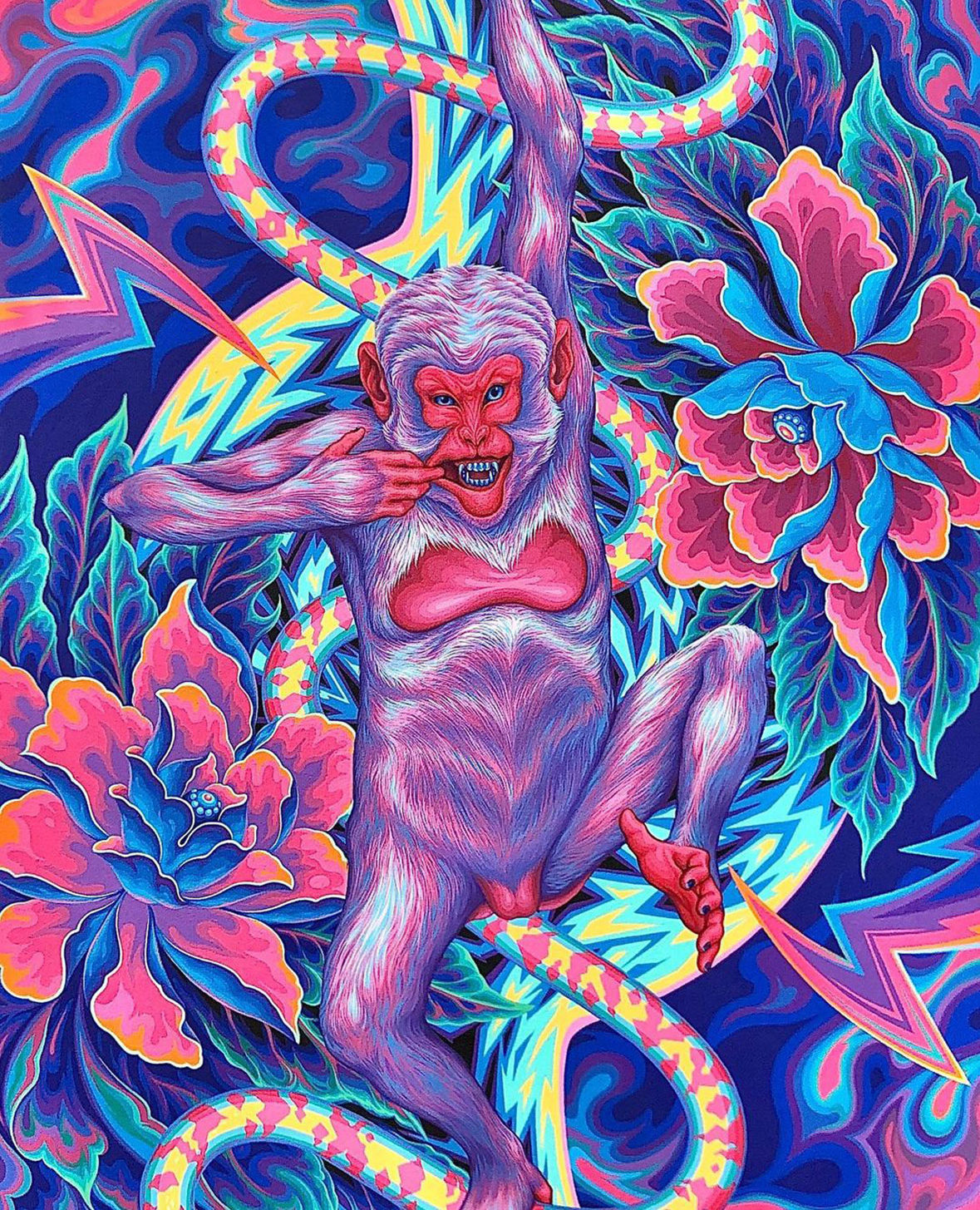 As he sees it though, there are differences between the two country’s art traditions that extend beyond aesthetics alone. Mexican art feel more visceral while Japanese art tend to feel more guided by logic. These differences between Japanese art and Latin-American art make for interesting juxtapositions. Kenta’s unique interpretation of both cultures is proof that when seemingly clashing ideals are given a chance to intersect, magic happens.