The pandemic has affected everyone to varying degrees, and people have found different ways to cope. One method is the ability to find humor even in dark times. The oil paintings of Filipino artist Mark Martinez do precisely that. While his artwork has long dwelled on less than glamorous settings, they’ve always contained a healthy dose of levity. His recent work surrounding the lockdowns, virus outbreaks, and economic crises in the Philippines is no exception. 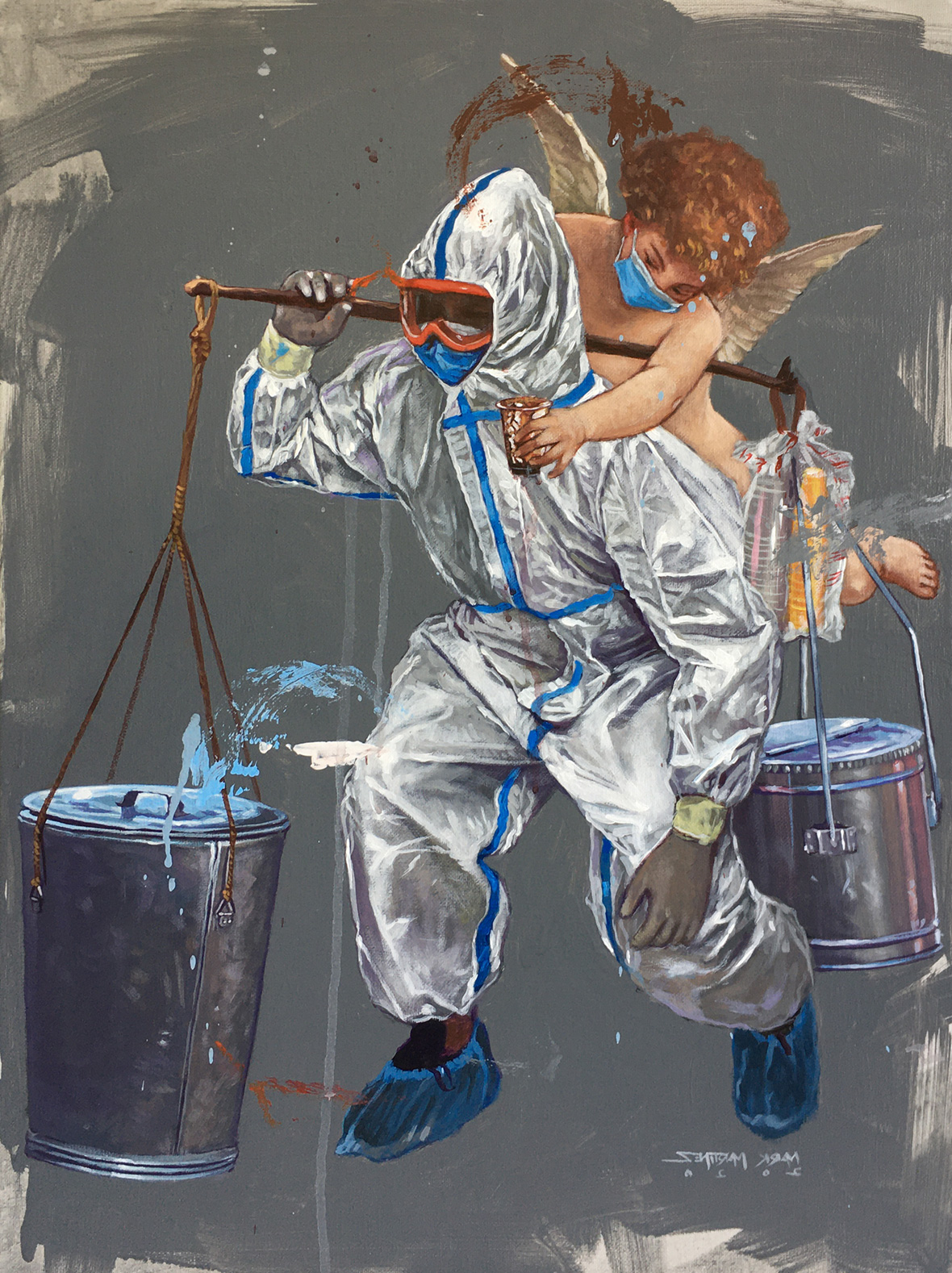 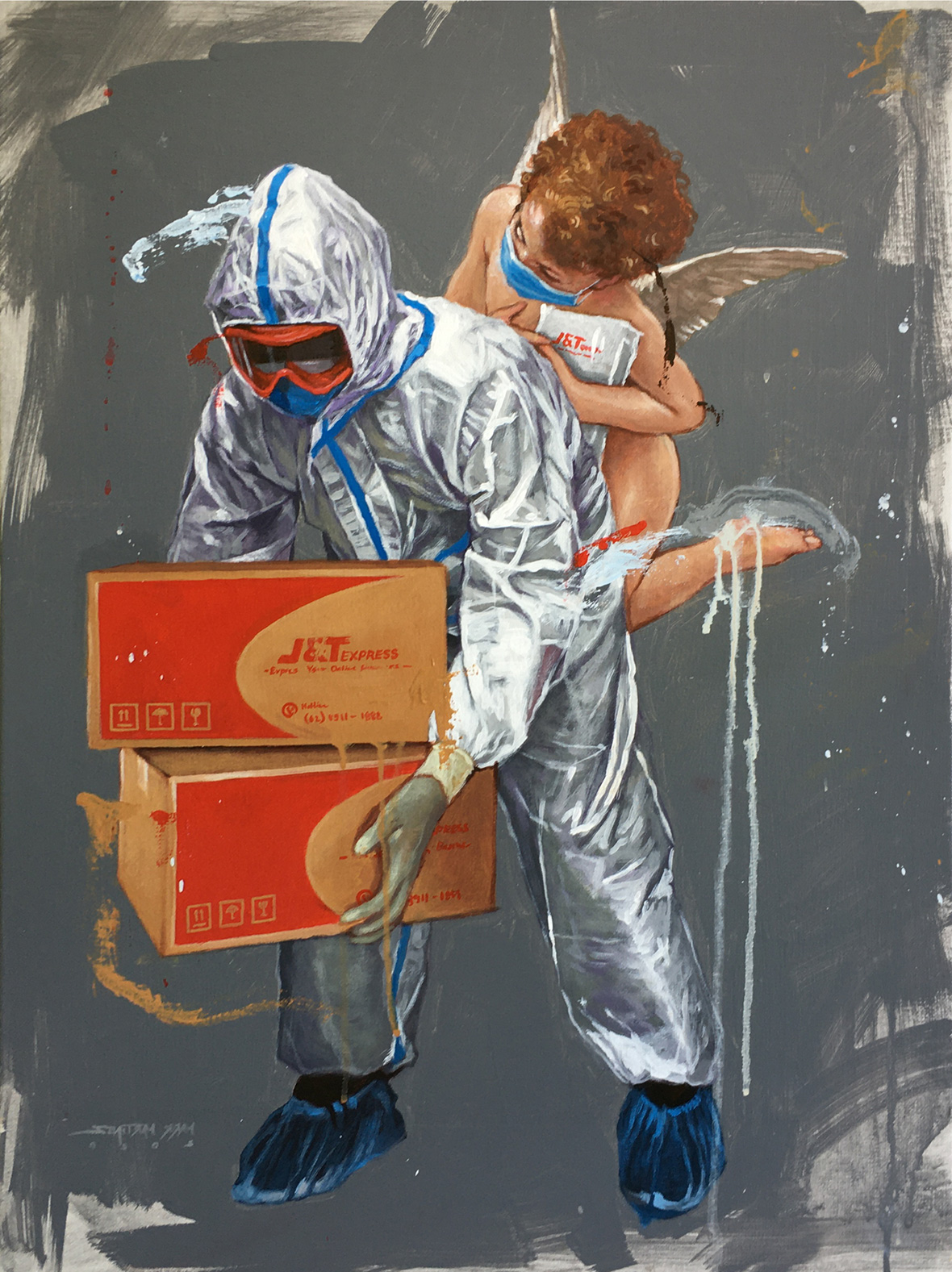 Martinez’s COVID series builds on his usual cast of characters, which places classical European motifs into everyday Filipino scenes populated by regular people and familiar signage. Only now, his characters are fully dressed in PPE, and many scenes take place in uncomfortable hospitals and virus testing centers. Typical forms of pandemic theater, such as infrared thermometers, also make regular appearances. “Despite the fact that history’s repeating itself, I think this pandemic has brought out the best and worst of us, and definitely tested our faith,” he says 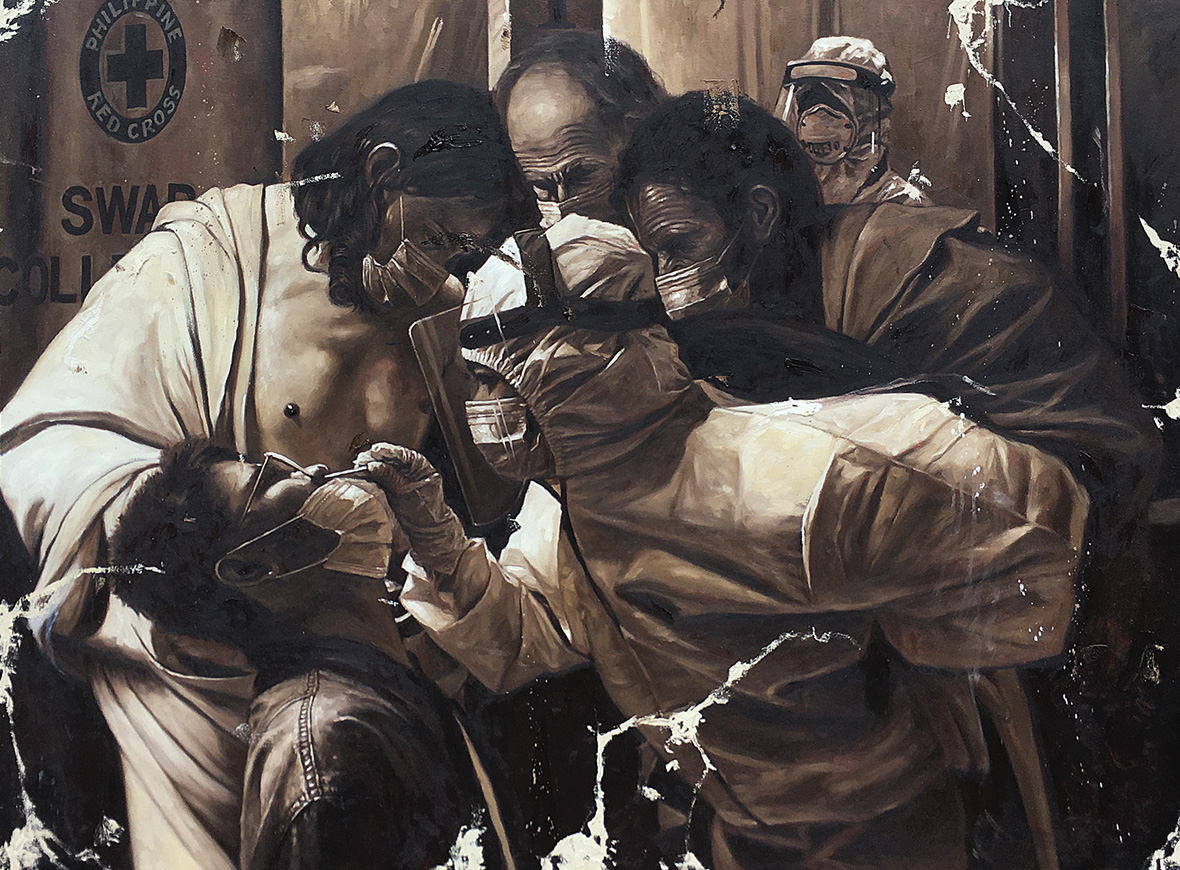 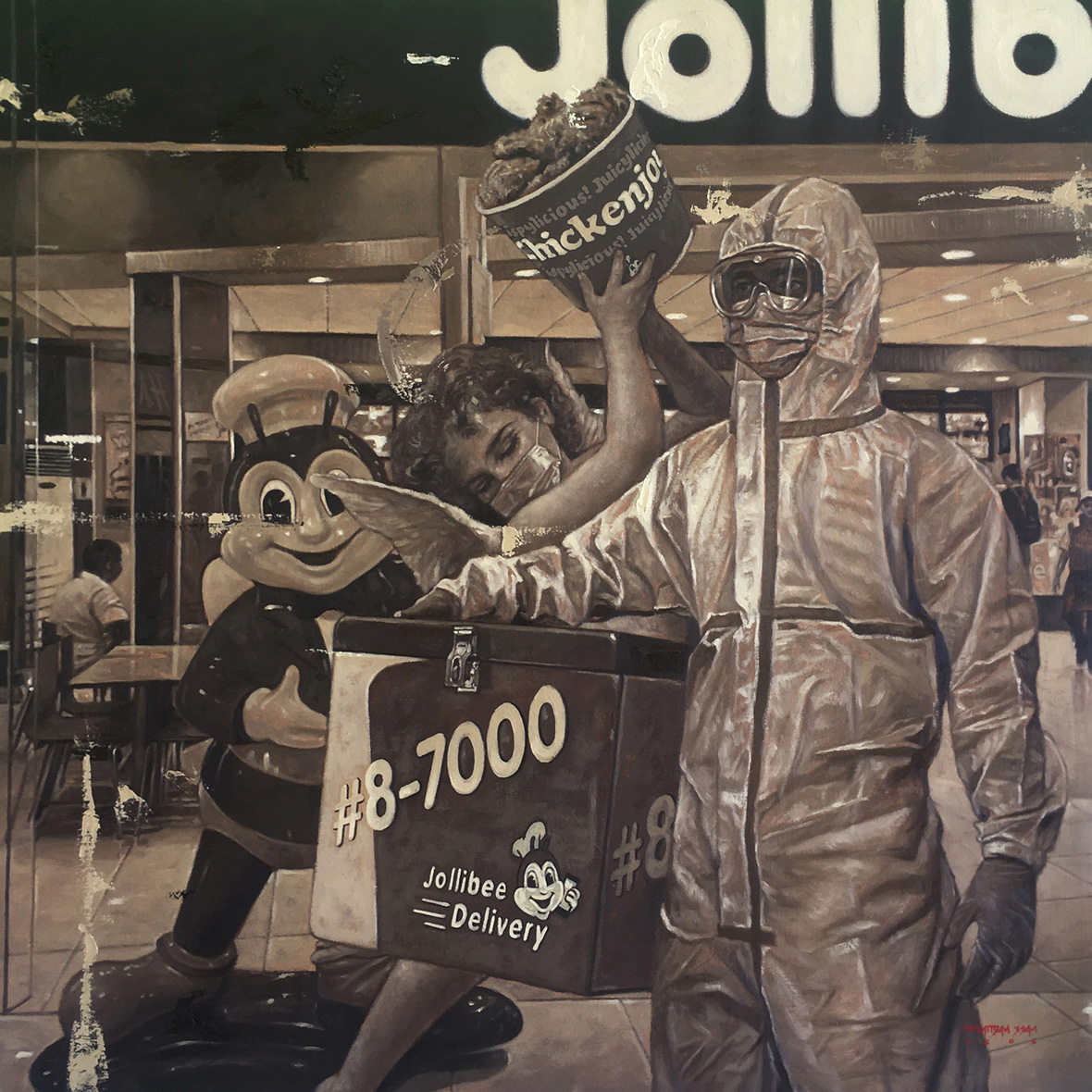 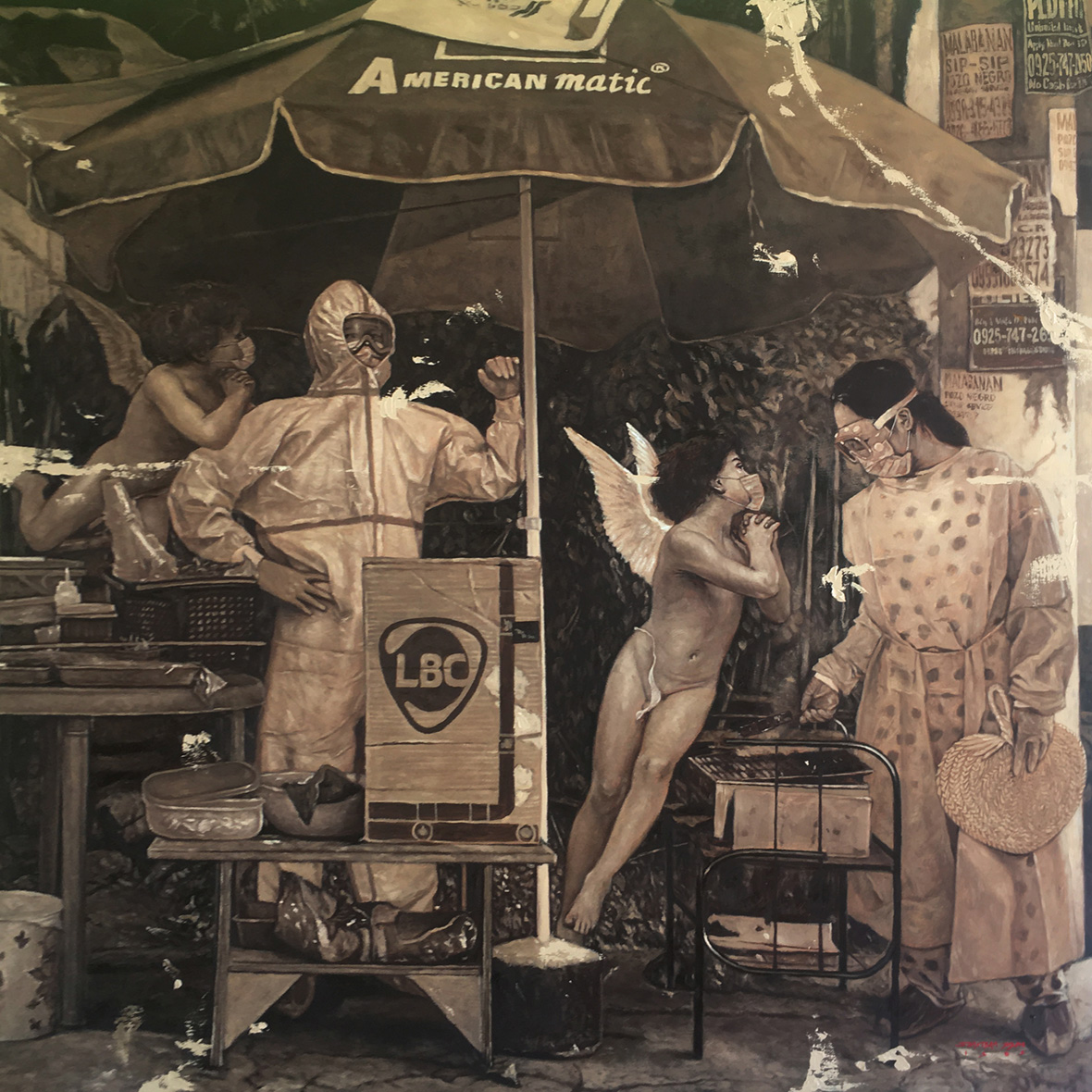 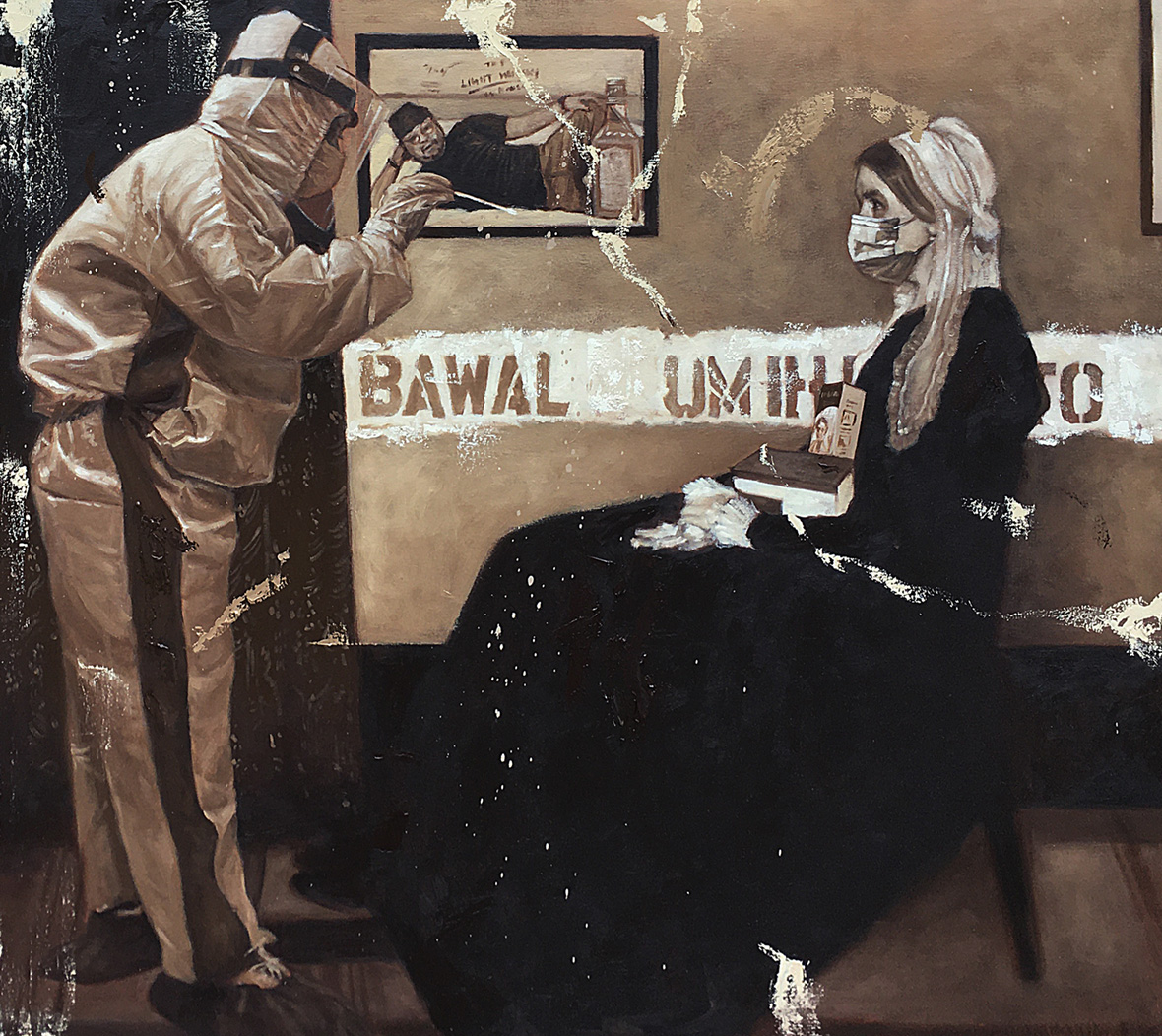 He’s from Bulucan, a province just north of Metro Manila, and got an early start with art. By the fourth grade, he was already drawing editorial cartoons. “That’s been a huge influence on my work, to this day,” Martinez says. He continued cartooning through high school, and eventually enrolled in a fine-arts program at university. His graduation and success as an artist are something of a victory for his family, since he had two uncles who both enrolled in art school but had to drop out in order to support their families.

Martinez settled on his current style while still in college. “I joined painting competitions using old photos as references, eventually including old and classical paintings,” he recalls. “I combined them with objects or everyday scenes that I witnessed around me. I wanted to make a new story out of them that my fellow Filipinos could relate to.” 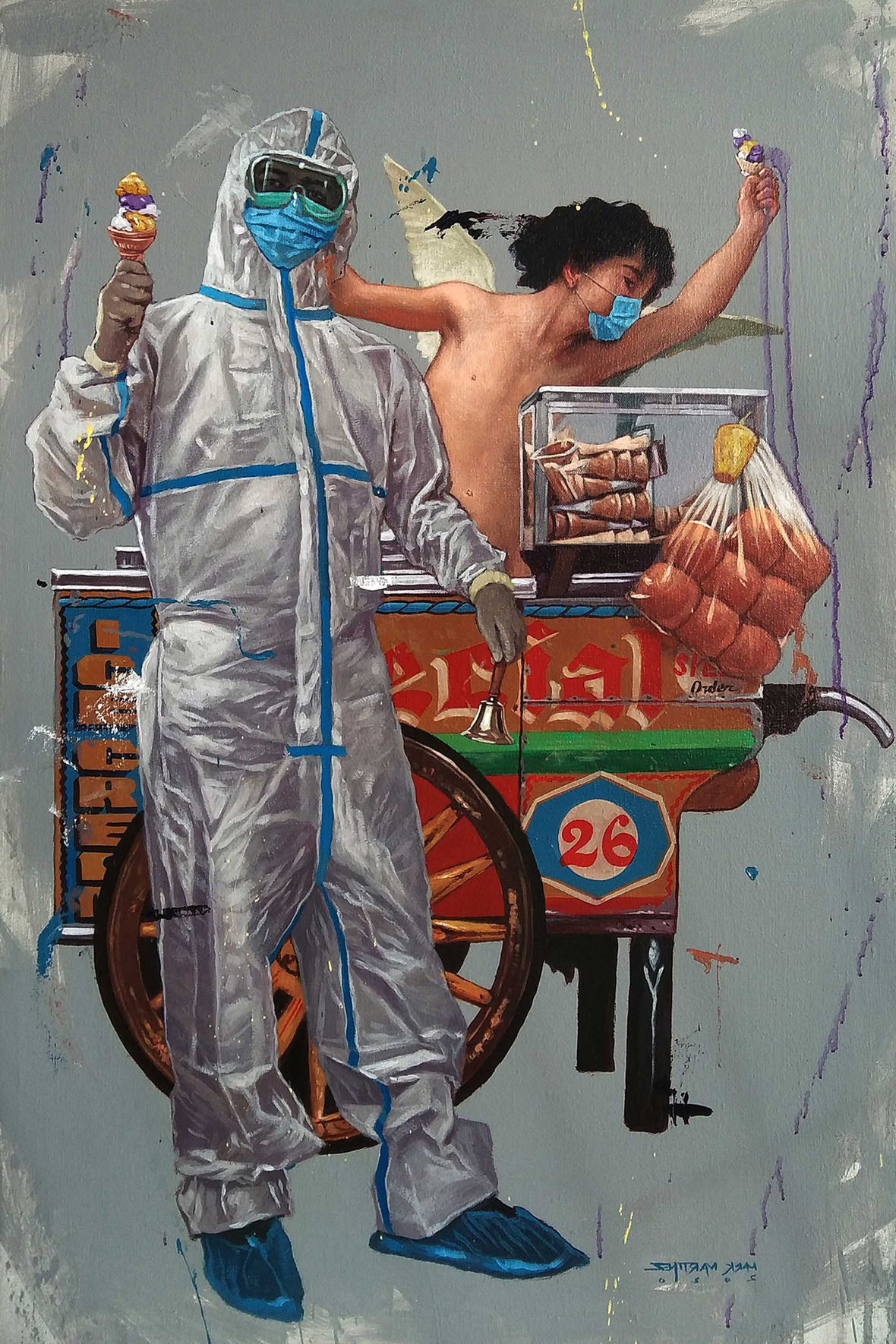 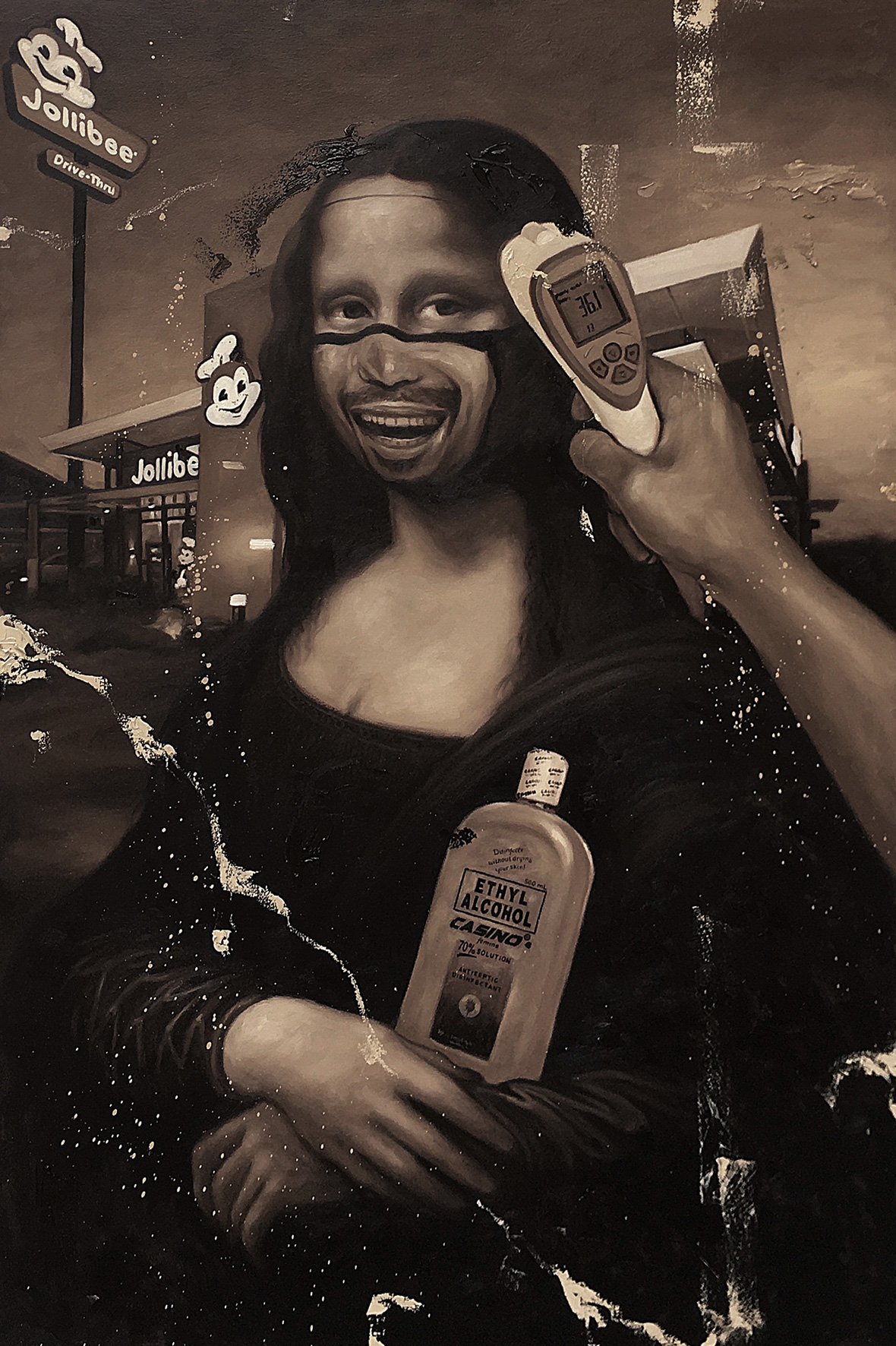 The cast of characters in his work is consistent, ranging from cherubic angels and Biblical figures to fast-food workers, street vendors, and jeepney drivers. These characters are depicted while making inuman, singing karaoke, or getting sloppy at a restobar—once-typical forms of social gatherings that are regularly off-limits due to the pandemic. Familiar Filipino iconography in the form of ubiquitous corporate logos are splashed across his work as regularly as they’re seen in every corner of the country. Martinez says he has neutral feelings towards these logos—they simply exist. But he says the fact that Western classical art is more recognizable than the work of local artists bothers him: “Most Filipinos find foreign stuff more appealing or interesting, it doesn’t matter whether it’s a human being, a shoe, or a song. This may be hard to accept, but it’s the reality nowadays.” Repurposing classical paintings is quite common in the Philippines, with several artists, including Martinez, using Girl With A Pearl Earring specifically. 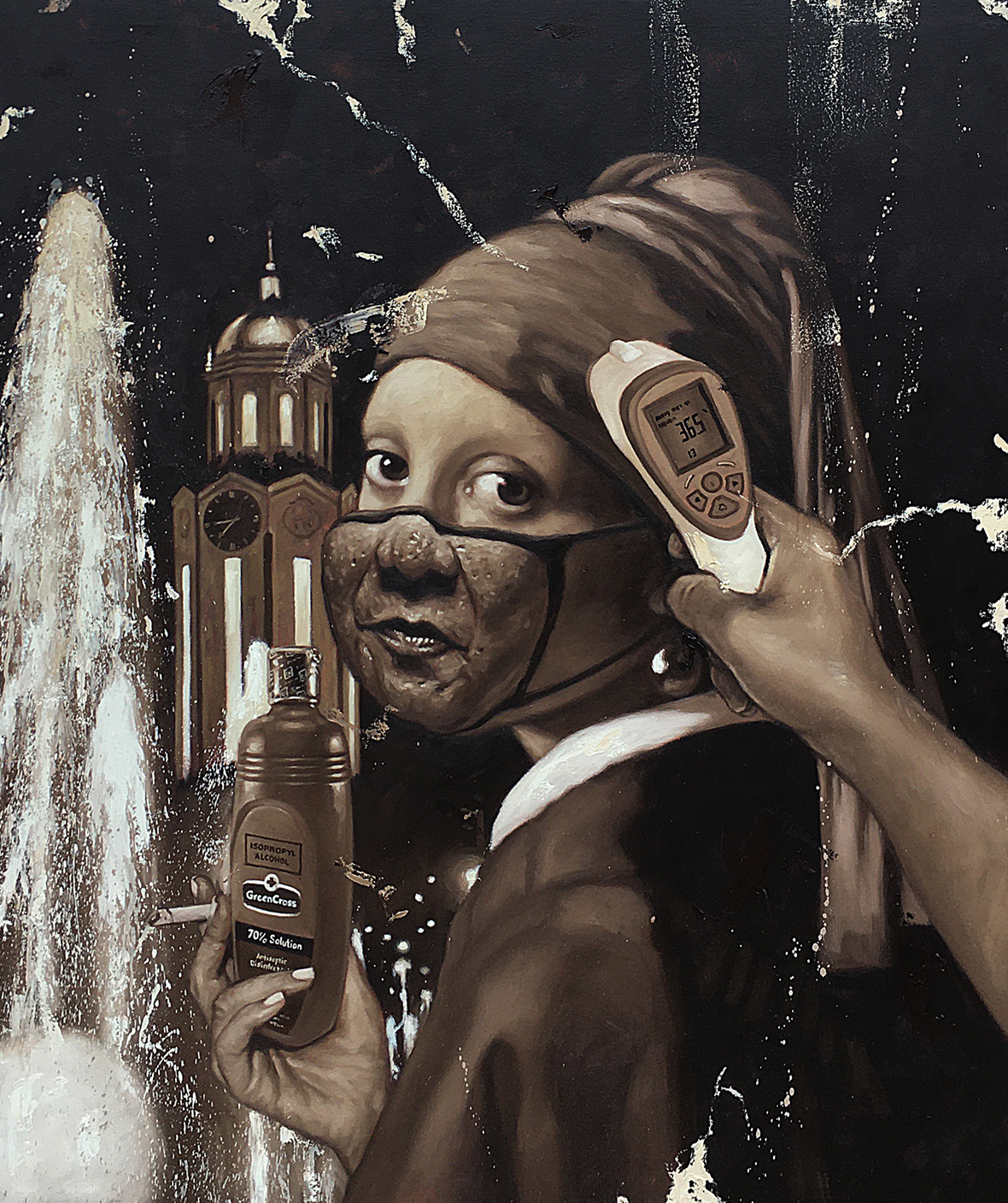 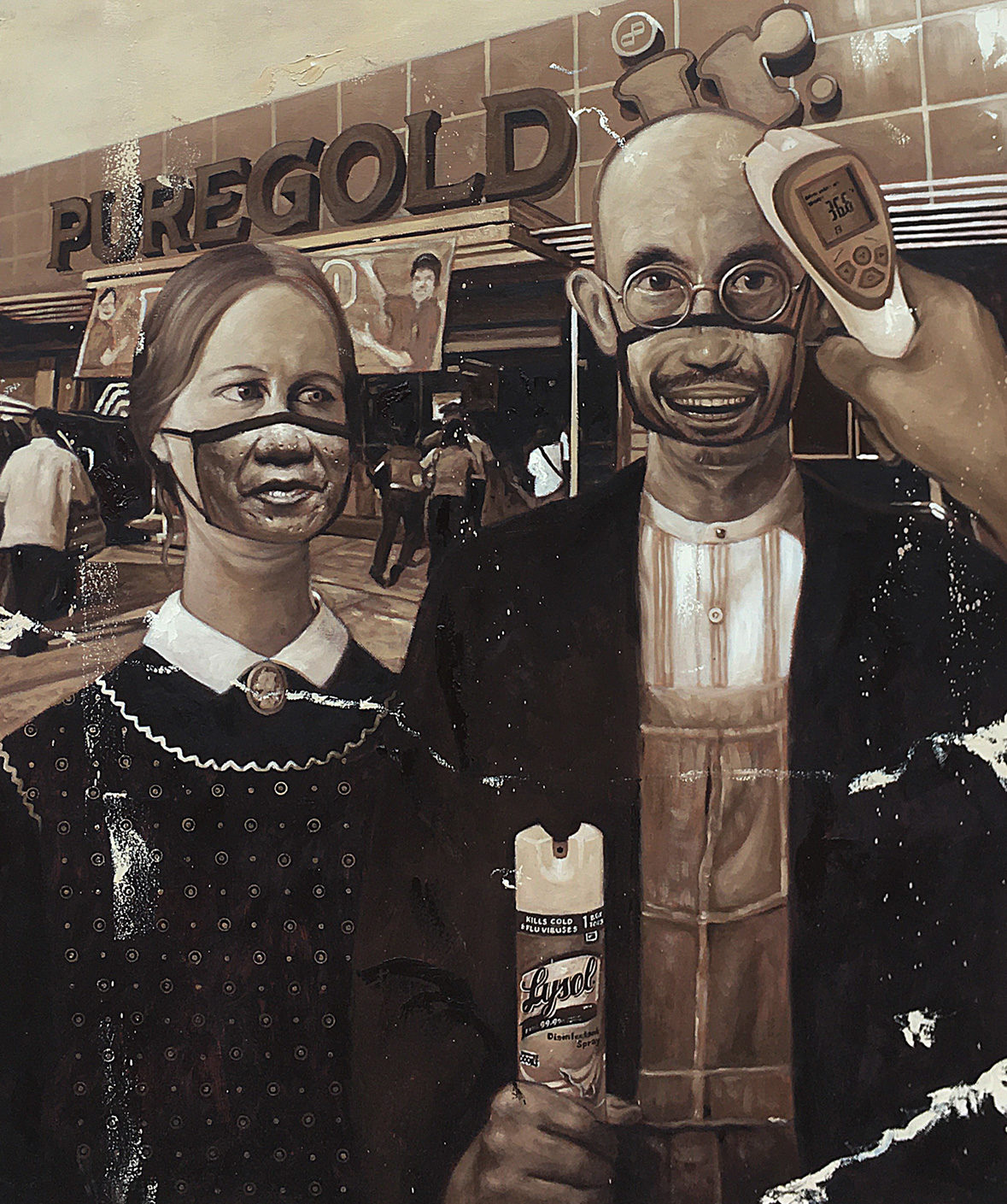 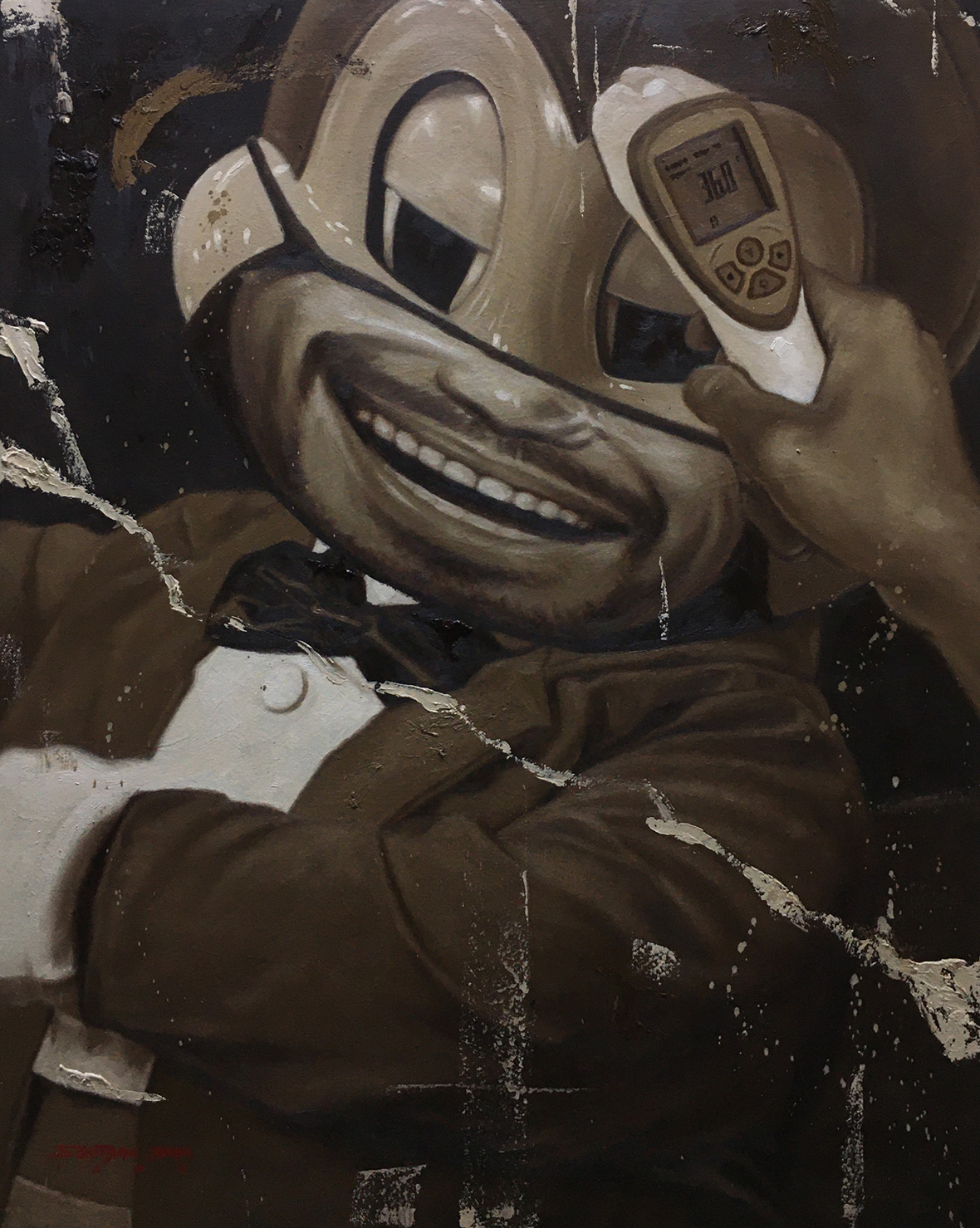 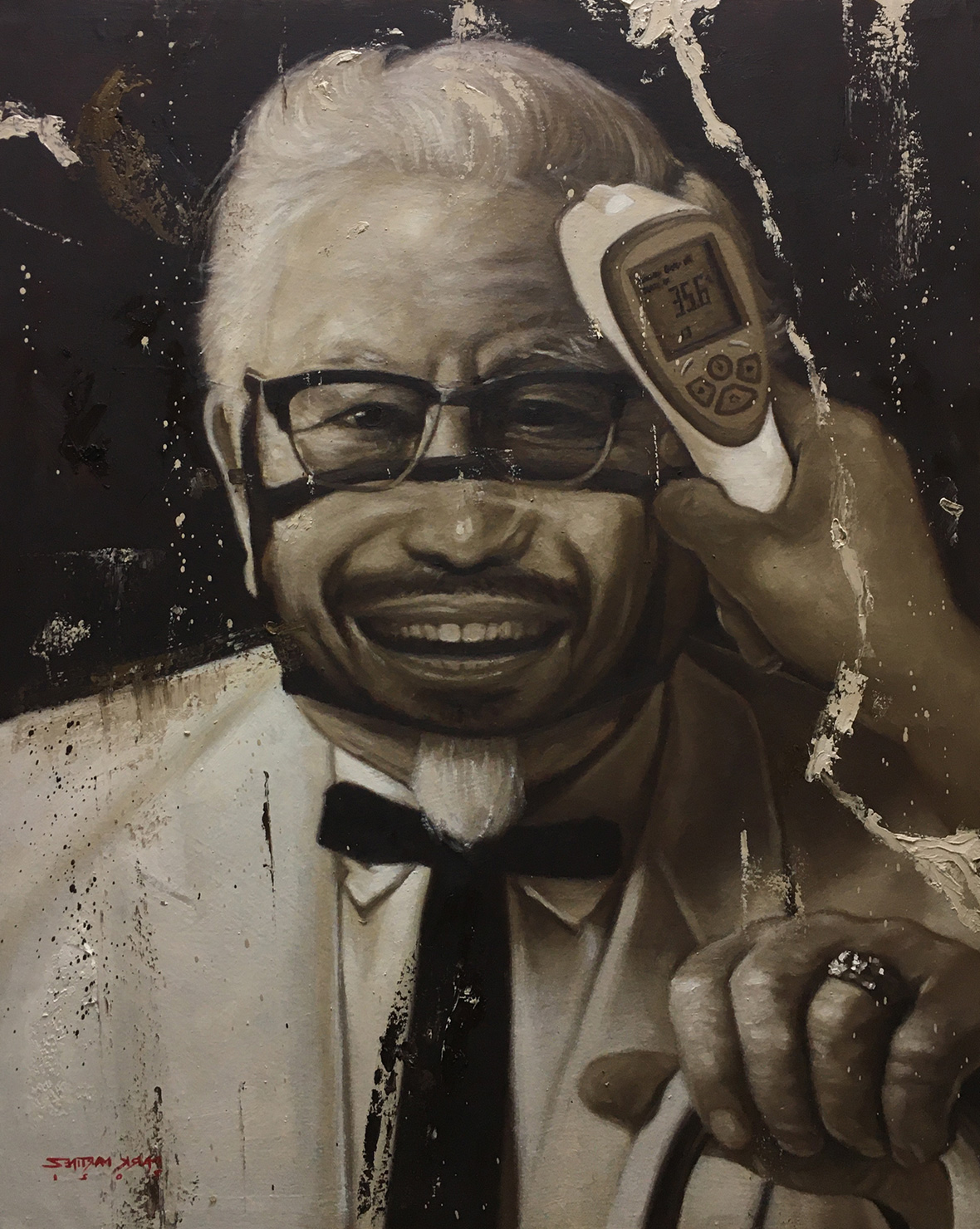 Despite the pandemic, life goes on, even if it’s drastically different in some ways. Many of the scenes and people Martinez has been known to paint still appear, just now weighed down under new burdens. “I want to show how important our frontliners are; to show appreciation for their daily sacrifices just to serve their fellow countrymen no matter how dangerous it is for themselves and their families,” he says of his newer works. This includes minimum wage workers delivering and serving fast food and street food, not just health workers. “These workers were overlooked at the beginning of the pandemic. That’s why I dress them in PPEs, to emphasize that they are indeed frontline workers. As time went on, people here have definitely started to appreciate them more.” His paintings of the Jolly Bee and Colonel Sanders covered in face masks while being scanned for fever are for the same purpose, as a way to highlight the fast-food workers who’ve lost their jobs or have to risk their safety to keep working. He often adds angels to these paintings as an offering of protection of sorts. 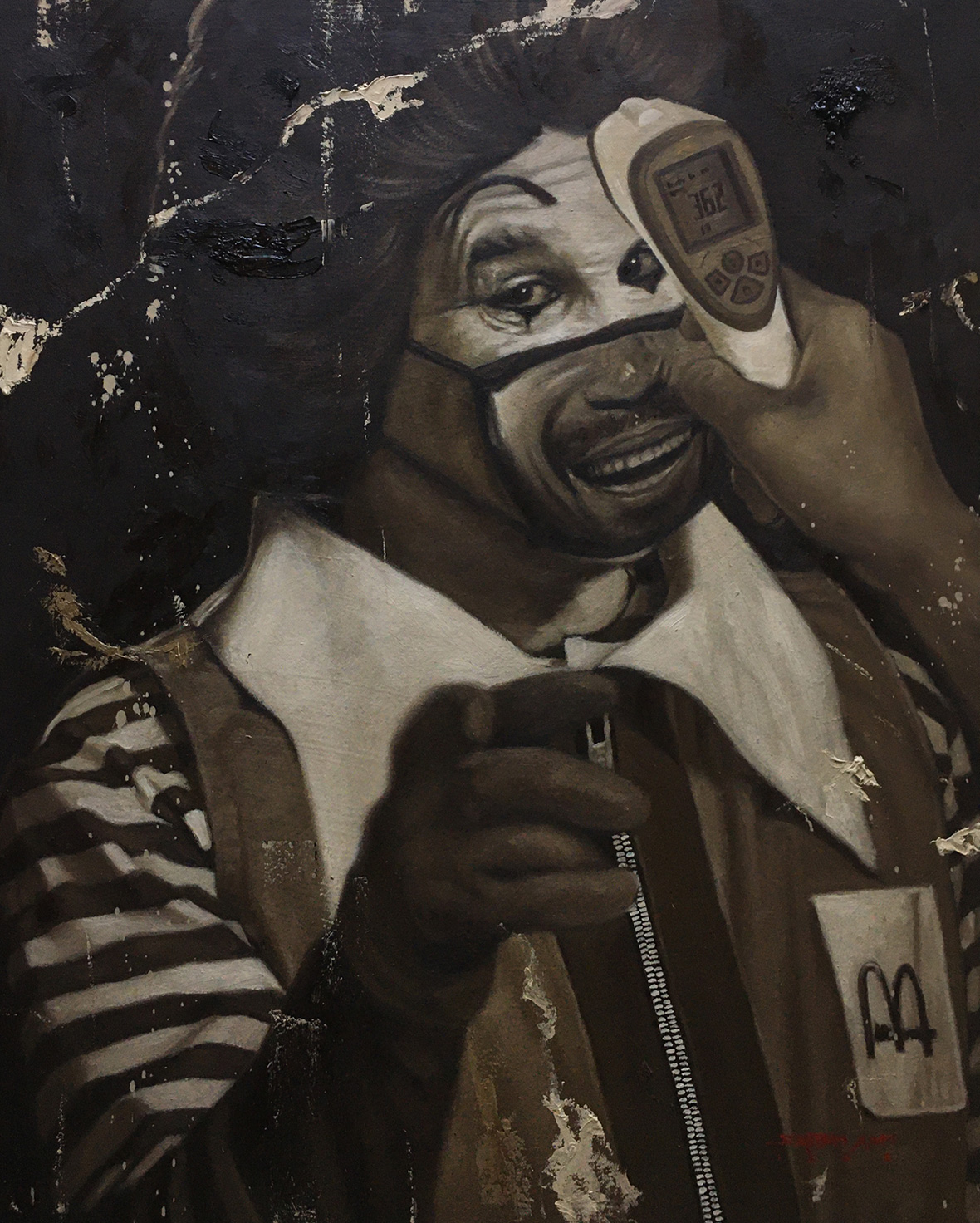 One common object in the new series is a face mask with the lower half of boxer Manny Pacquiao’s face printed on it. “These masks were a funny Filipino trend even before the pandemic,” he laughs. “Even if we’re having a hard time dealing with this pandemic, we still have enough humor to make each other laugh and feel a bit lighter. There’s too much sorrow and despair these days, so I’m proud if my work can put a smile on someone’s face, even if it’s only for a brief second.”