When it comes to calligraphy in Asia, China and Japan are usually front and center thanks to traditions stretching back to the early days of the written word. But Thailand shouldn’t be overlooked. The country now boasts a large and innovative scene that embraces everything from contemporary calligraphy and calligraffiti to script-based tattoo art. Although the scene is barely a decade old, there are already hundreds of calligraphists putting the country on the map.

These calligraphy-driven works appear as bold, hard-edged blackwork tattoos; figurative art built with lettering that creates the shapes of skulls and animals; installation work covering walls, floors, and ceilings; and mural art stretching down entire streets. Styles include European gothic calligraphy, Chicano styles from the US, experimental and Thai fonts blended with all the above.

English text is the most common, but Thai scripts appear alongside it too. Although it’s impossible to say exactly how many artists there are, since they come from all over the country, there are now 4,000 members in the Lettering Outlaws Thailand Facebook group. Some notable names today are Shi Lin, Sivakorn Soichampar, Watchara Tick, and Aumpol Mest, and WS Whitebear. 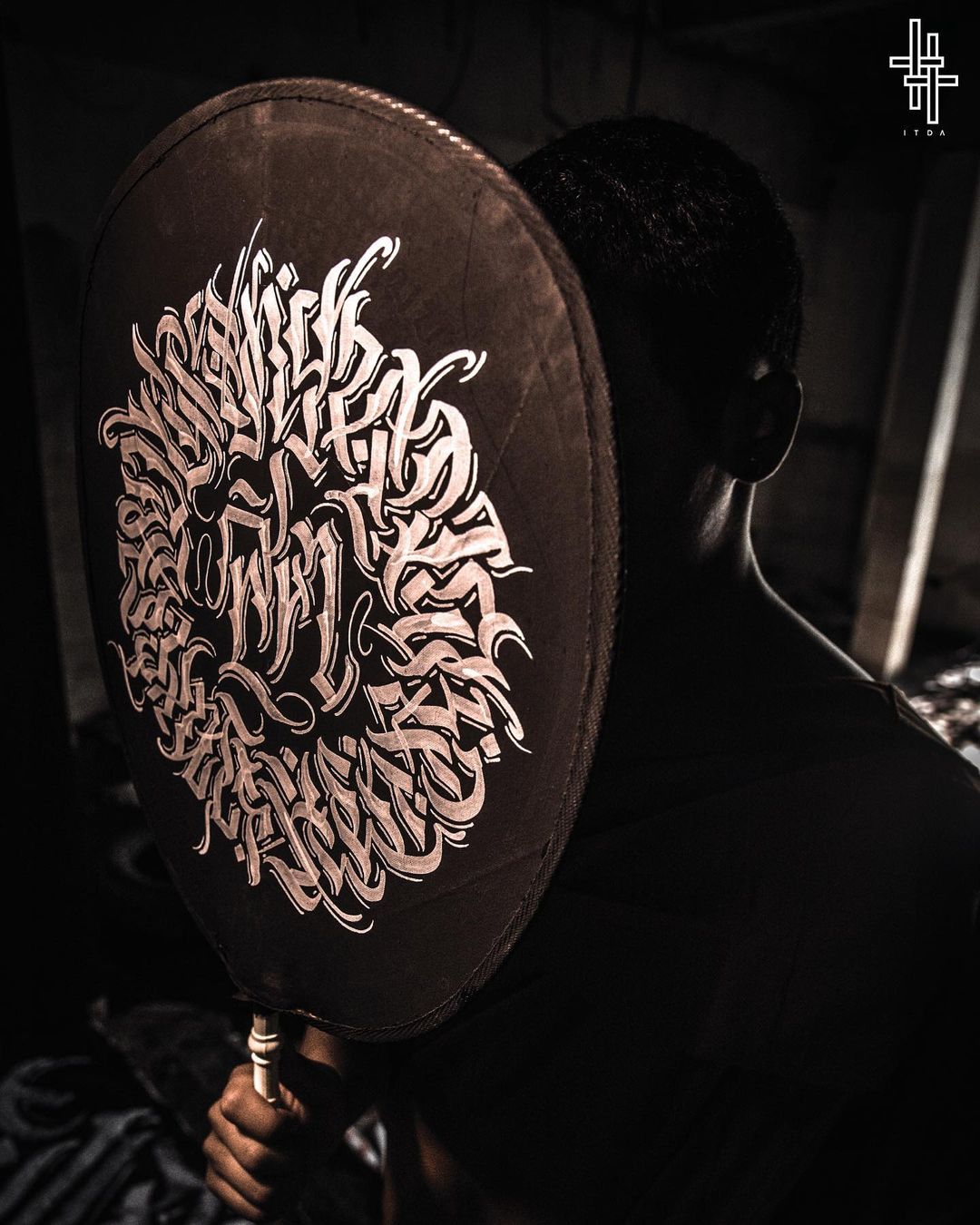 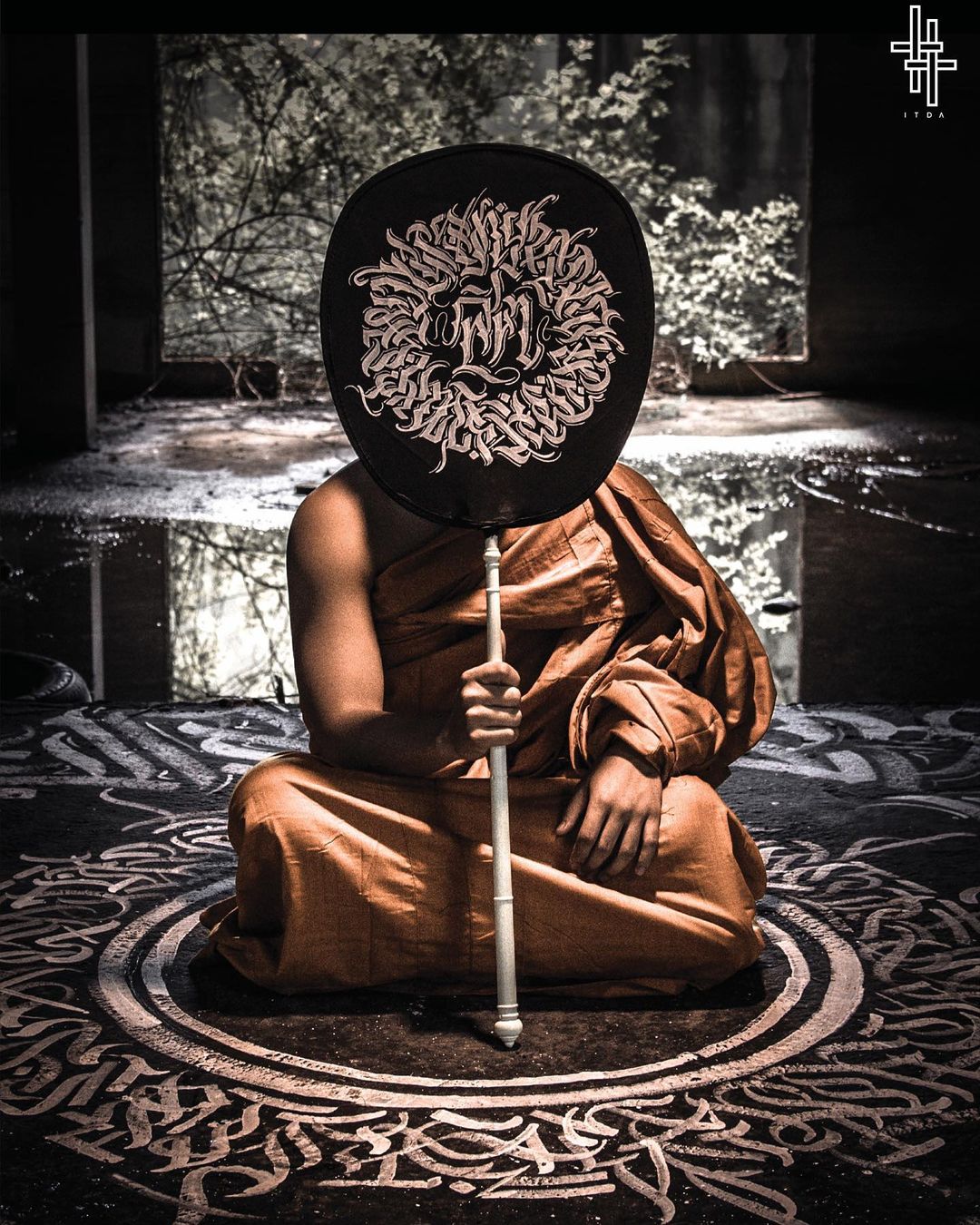 Thai calligraphy was used in historic manuscripts called samut khoi, which originated in the 14th century, but there aren’t many other local examples until the past century, according to Dr. Santi Khunprasert, an associate professor at Chulalongkorn University. He says Thai calligraphy first flourished during the reign of HM King Vajiravudh (King Rama VI) in the early 1900s, and it was then popularized by movie poster artist Piak Poster in the 70s.

The contemporary calligraphy scene started about ten years ago, says Nareadom Phasukdee, an artist also known as BlackThoracic. In the beginning, artists didn’t have access to much equipment or support, so they had to make their tools by hand and learn with whatever information they could find. “It was quite hard to learn about languages and characters, since the only reference sources were foreign books and the internet, most of it from the West,” says Phasukdee, who’s been involved in calligraphy for about six years now. “Thai calligraphy is mainly influenced by European cultures, which became popular around 2007.” 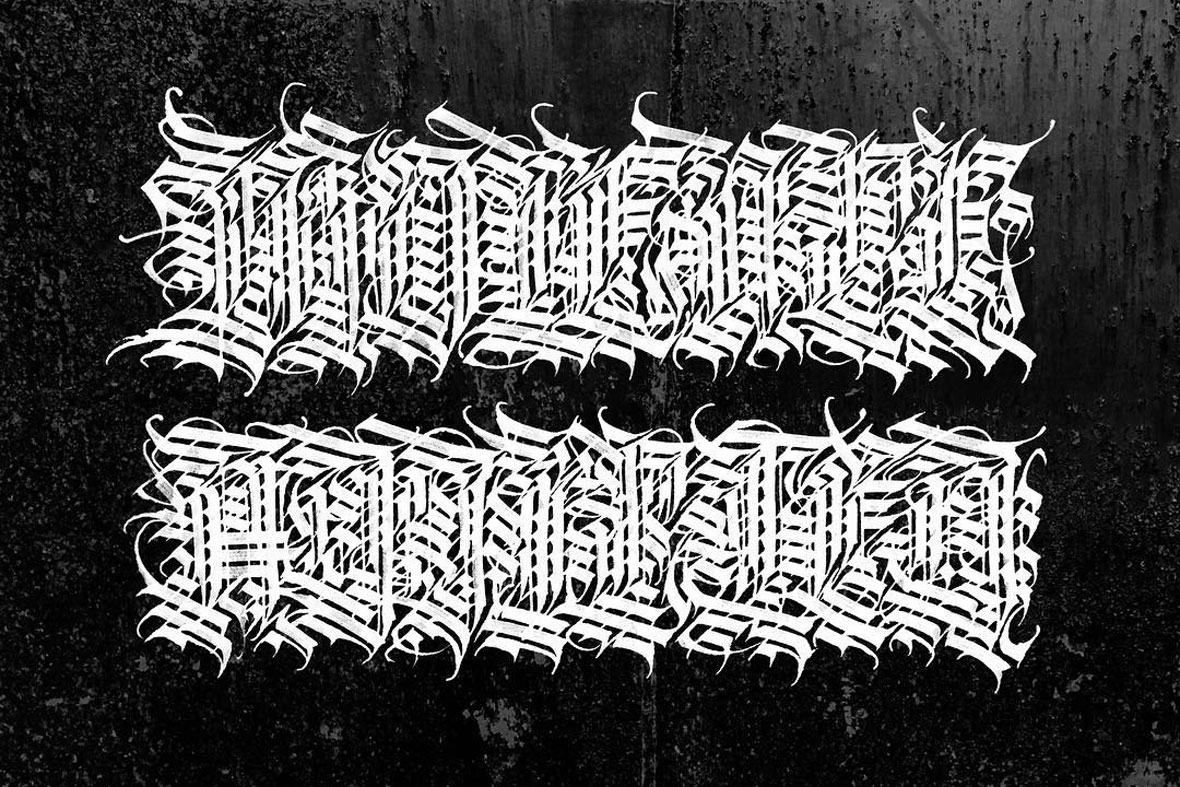 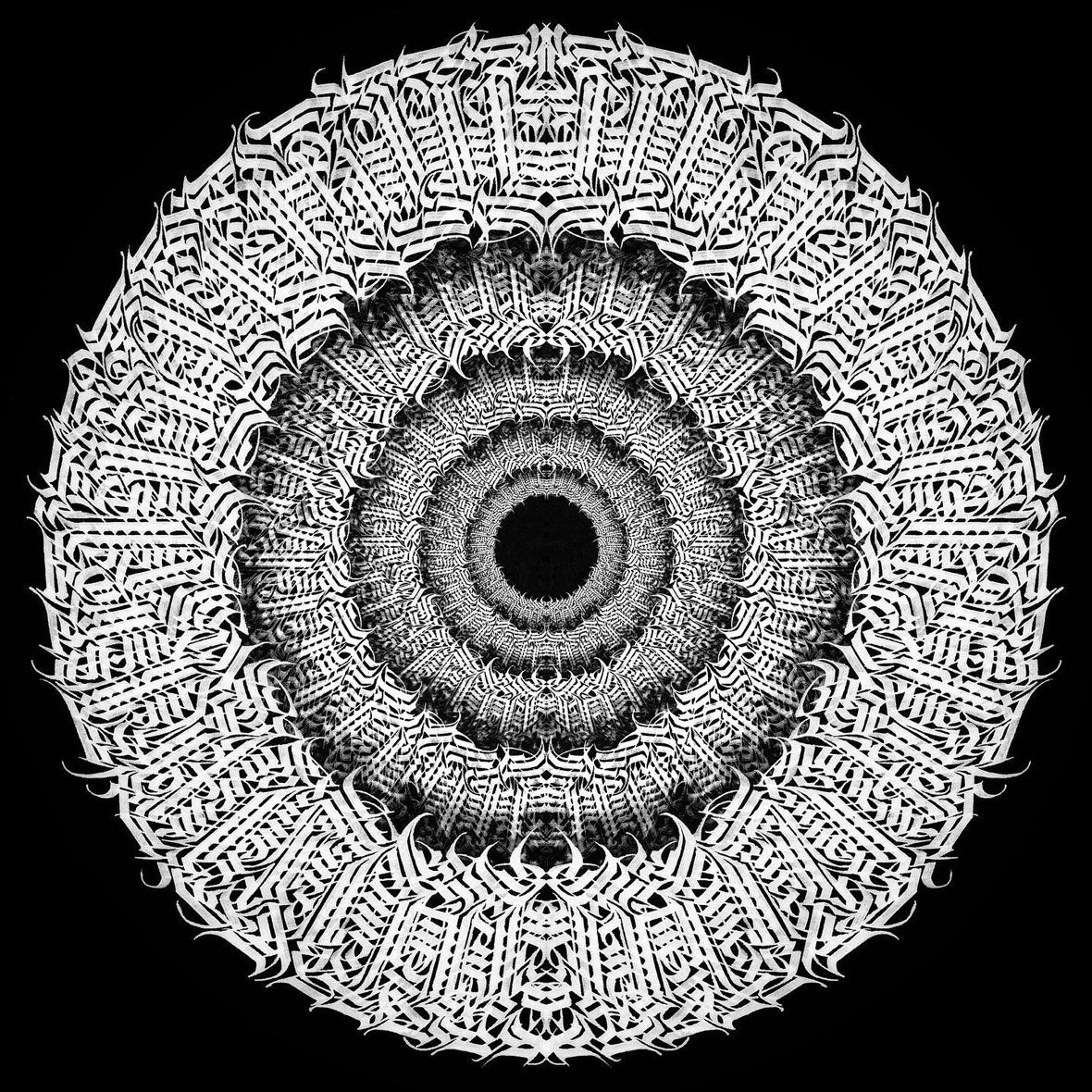 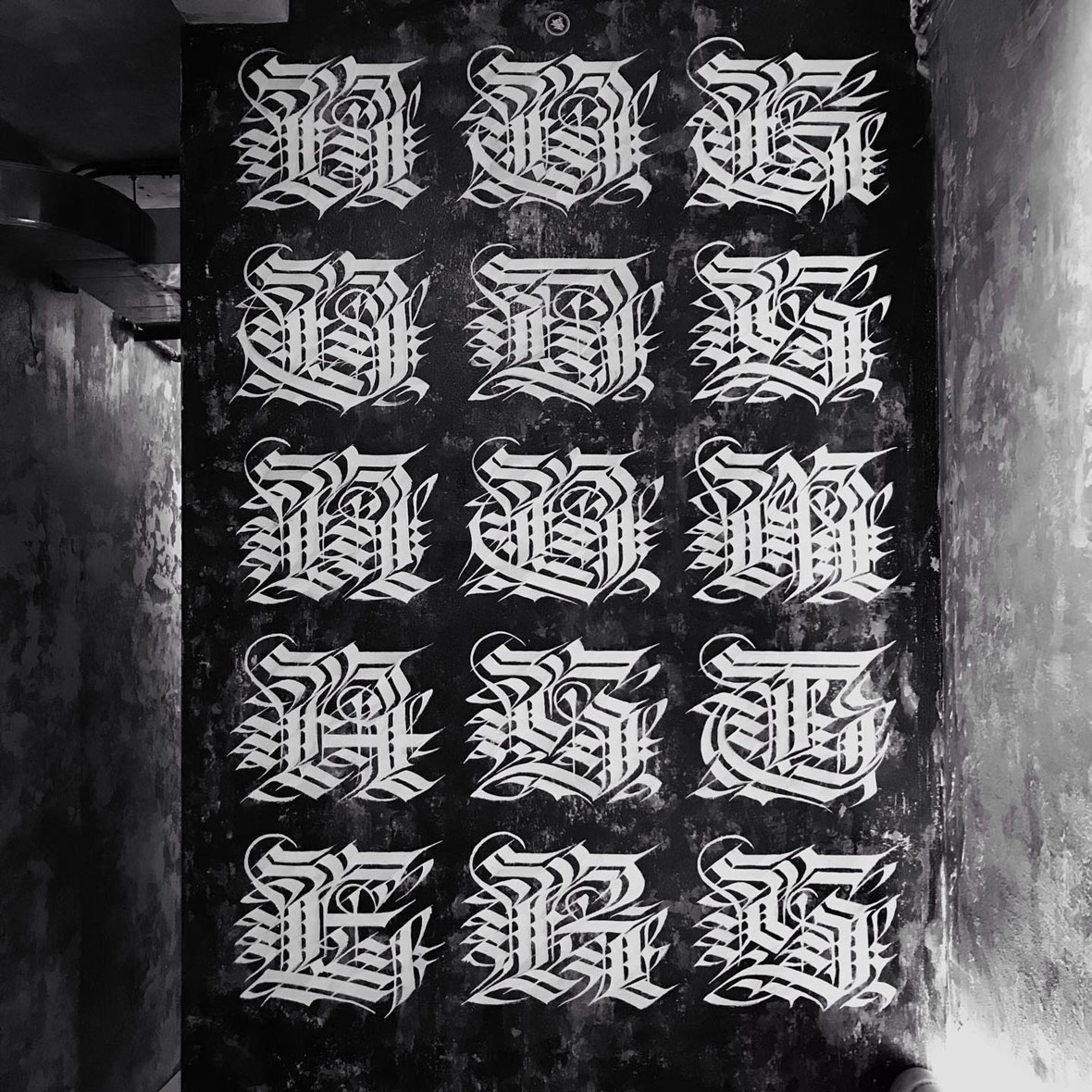 Arguably the biggest influence has been Chicano culture, a Mexican-American movement that celebrates and acknowledges their history and struggle, and is found primarily in Southern California and the American Southwest. There are a few types of lettering associated with Chicano culture. The style with the deepest roots is Cholo lettering, which comes from Latino gang graffiti going back as far at the 1940s. Chaz Bojorquez—often called the godfather of West Coast graffiti—is the most famous artist using this style. He was captivated by the gang graffiti around his Los Angeles neighborhood in the 60s and embraced it as a legitimate art form, introducing it to the rest of the world. Old English is another lettering staple and is a foundation of Chicano black and grey tattoo culture that has also resulted worldwide impact. Scripts, the loopy and elegant font used for more sensitive topics like family and religion, are another foundational letterform popularized through tattoos. And there are lowrider plaques, but those letters don’t have any particular style and vary widely. 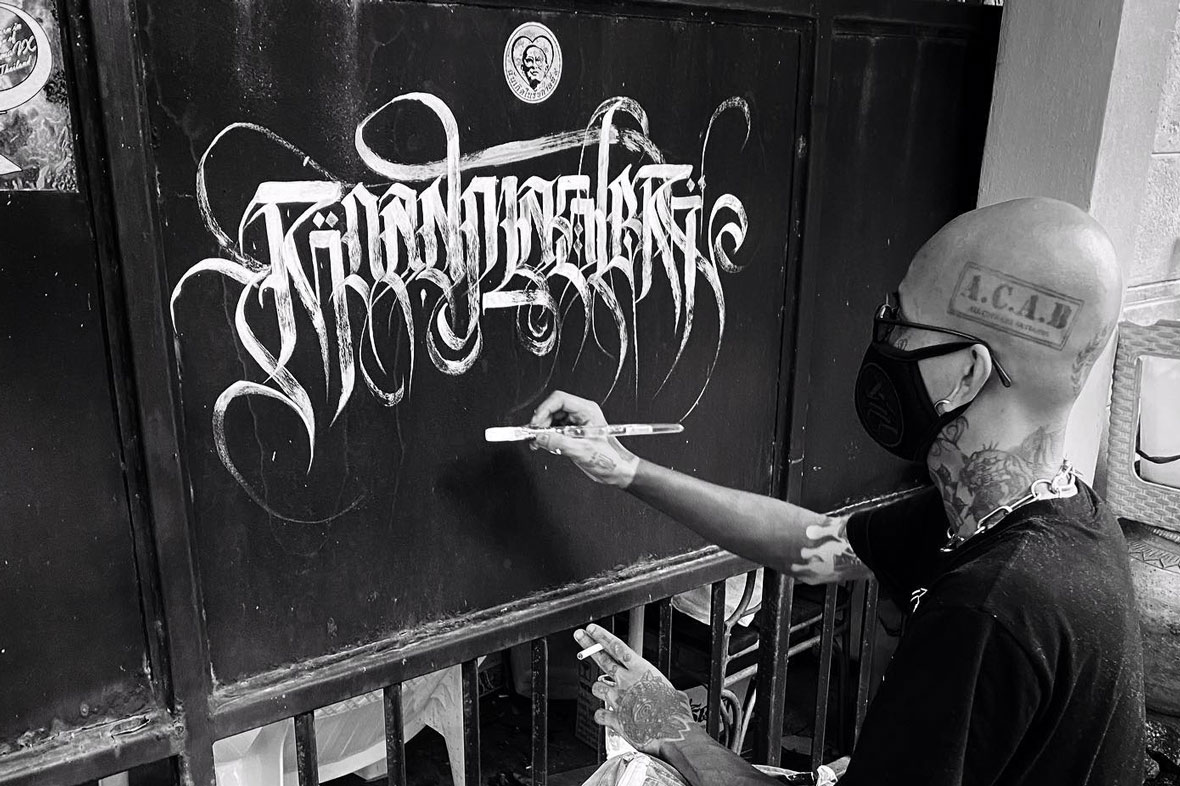 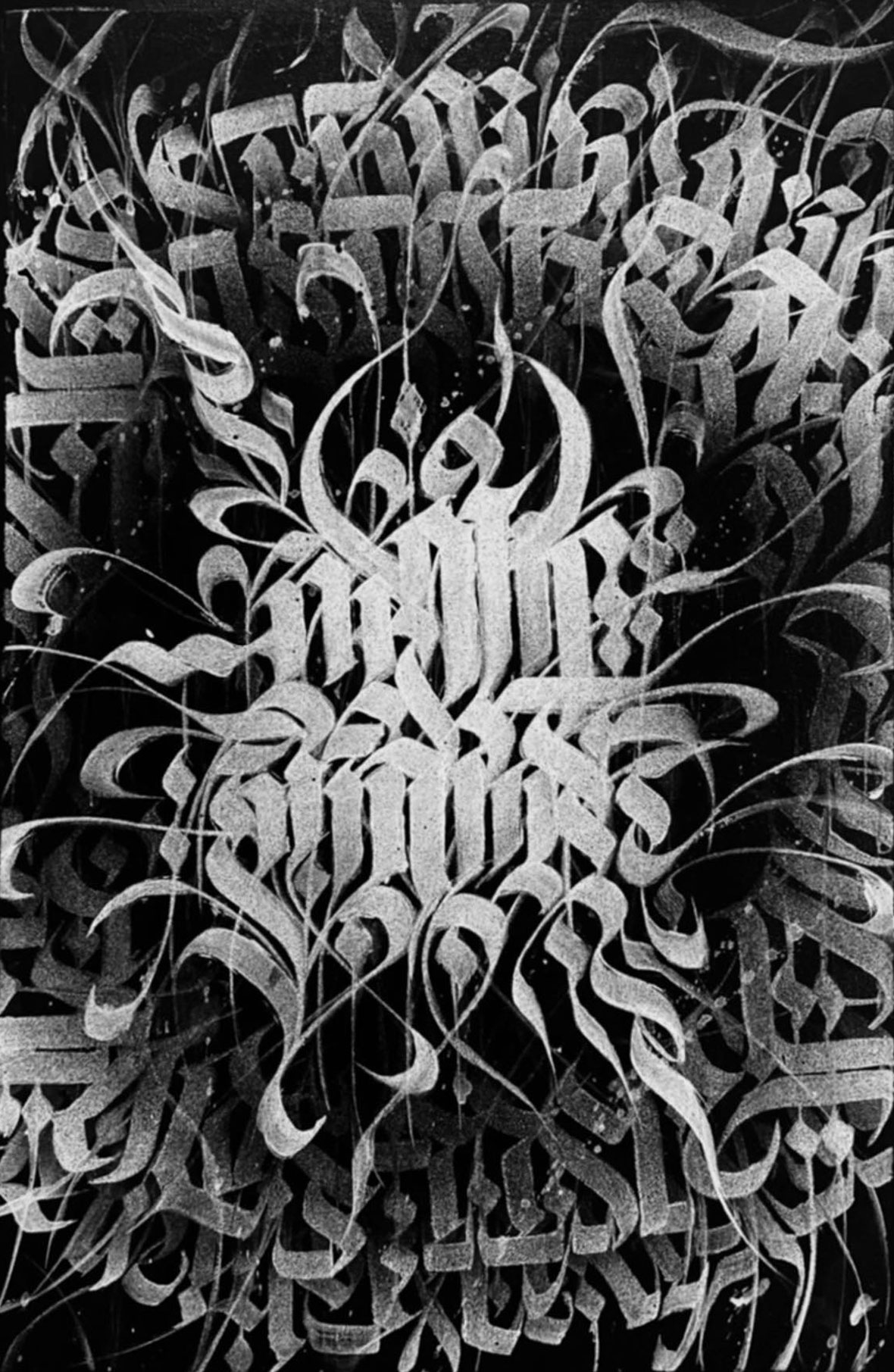 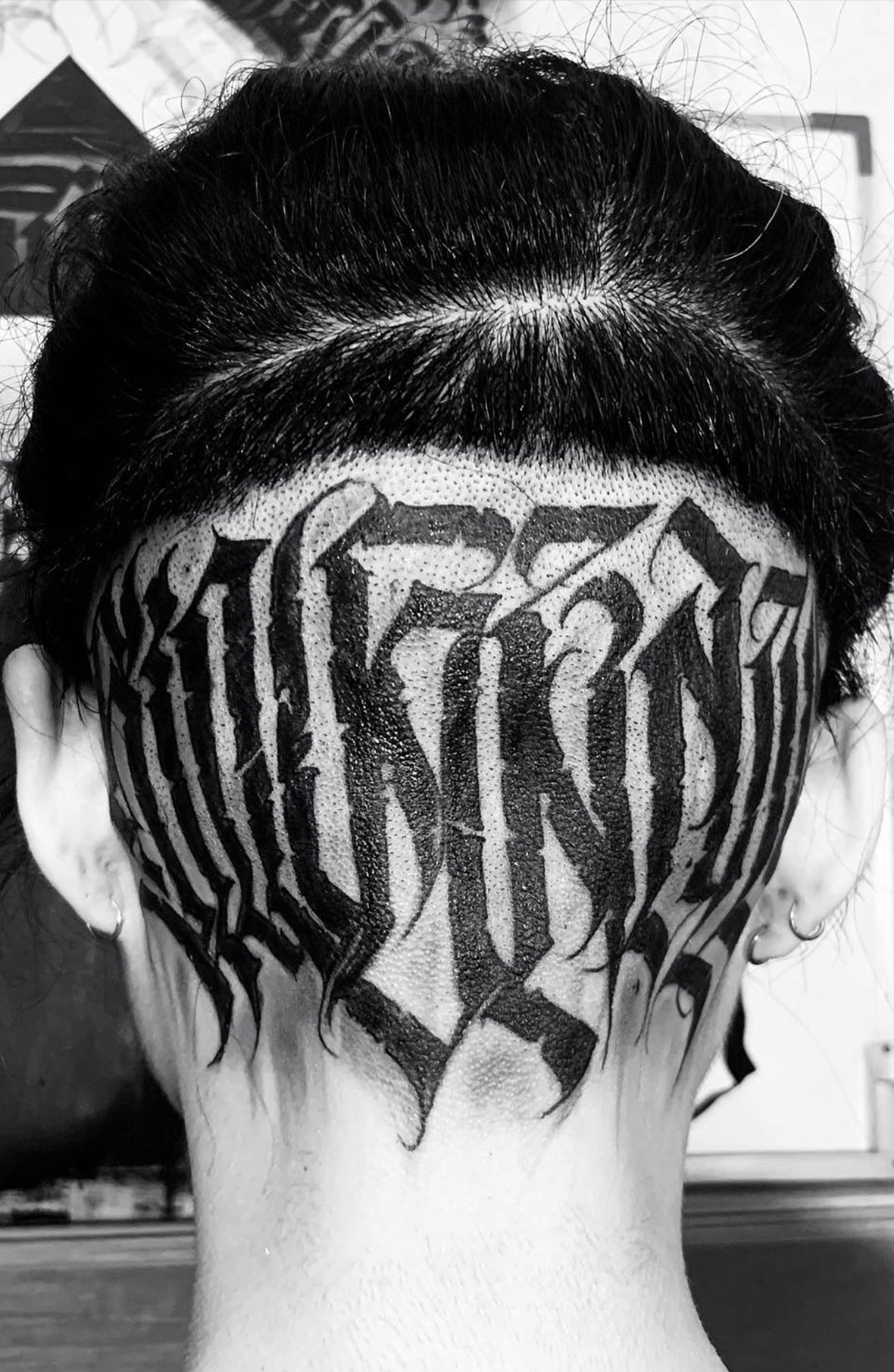 Many overseas Thais are located in the US, primarily in California, so the cultural transmission makes sense. But in Thailand, the adoption of Cholo lettering is not as street-oriented as it is in California. “From my point of view, the gang and neighborhood divisions here are not as serious as they are abroad,” says March Letterror, an artist from Bangkok. “Many people went to California and got influenced by the culture, then they spread it in Thailand.”

Phansan Chandaeng, more commonly known in the art world as Sanblack, is an artist directly inspired by Chicano artists. He had experimented with tattoo art in Thai lettering for a couple years, but it wasn’t until he discovered Chicano-influenced artists in Thailand that he really found his calling. Specifically, he credits Unkle Bigbear, founder of the Lettering Outlaws group, as being a source of inspiration.

In recent years, Chandaeng’s work has been deeply influenced by death metal logos and he primarily works in English. But he has some very personal, local inspirations as well—specifically his mother, who had a job hand painting the lettering on funeral banners. “My mom passed away when I was 15 years old, and I thought she didn’t leave anything for me,” he says. “But then I realized I’ve been familiar with Thai writing style since I was born. At first I was a bit surprised I could do it. I thought back and remembered images of my mom writing it. It’s a truth hidden in sorrow.” He took those memories and kept experimenting with them until he developed his own style. 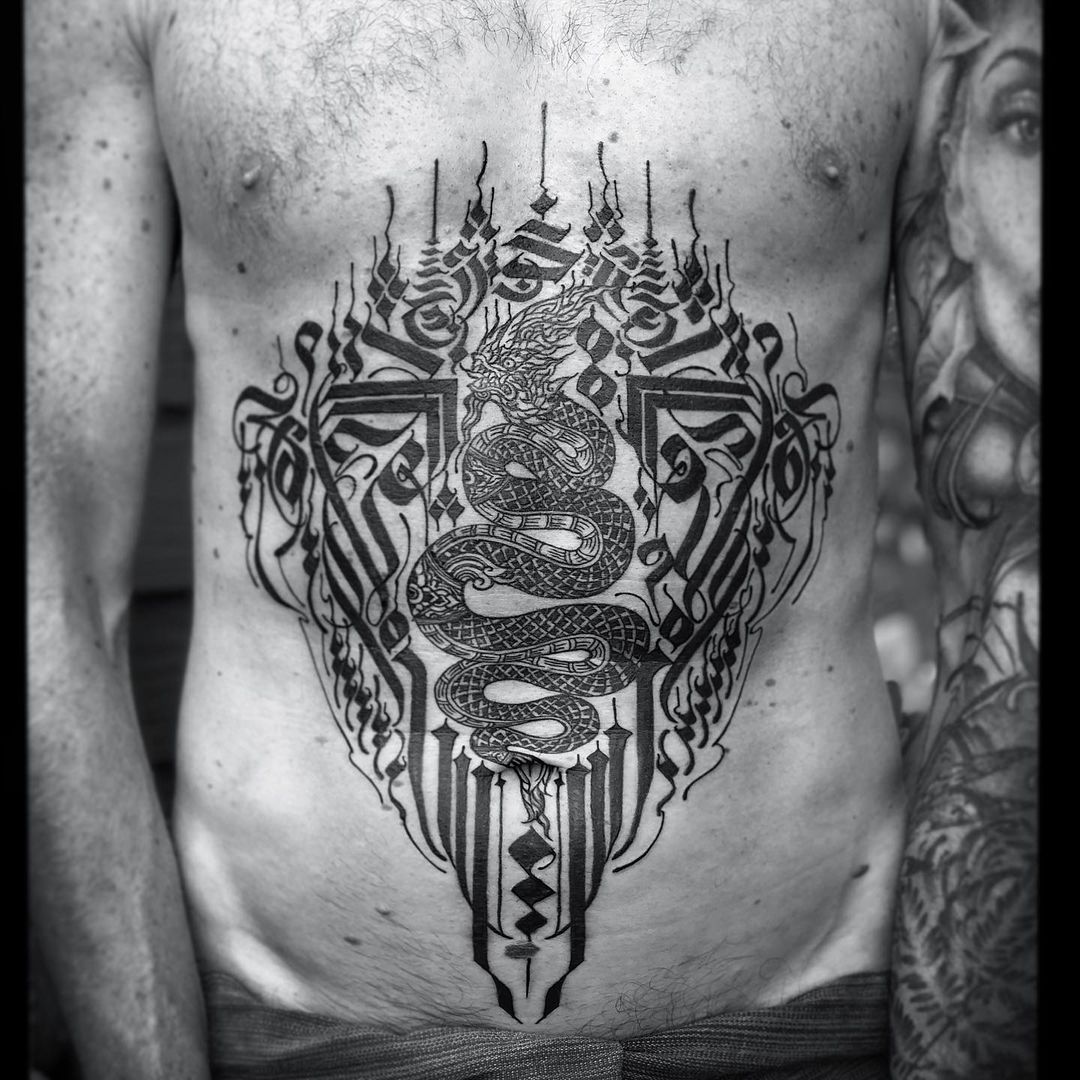 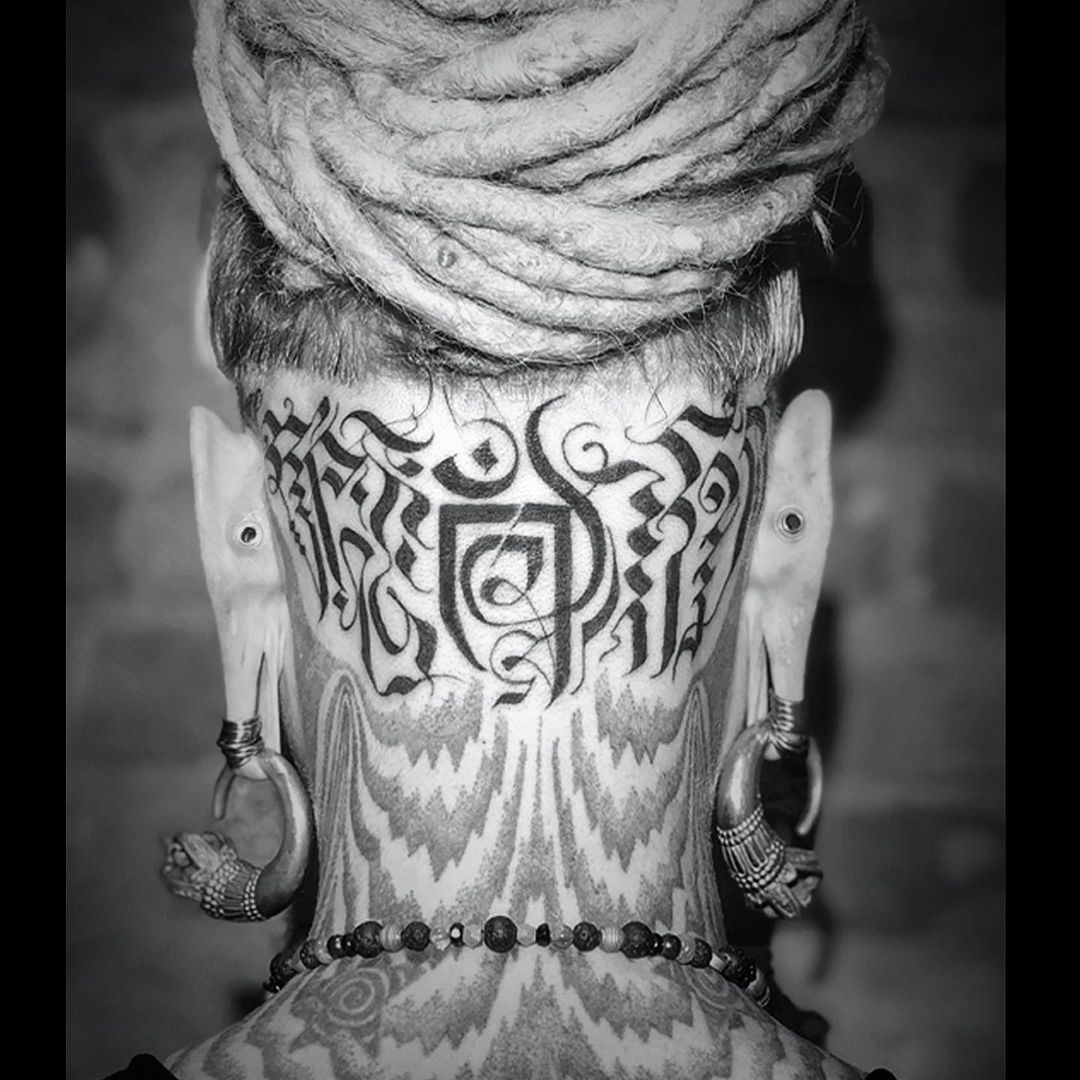 March Letterror, a 27-year-old artist, got his start bombing graffiti around the Sukhumvit area of Bangkok. He’d put up his name and crew but also leave drippy phrases like “homeless skateboarder.” He’s a punk rocker with an ACAB tattoo stamped on his head. Although he studied fine arts at university, he didn’t graduate, and instead gravitated towards tattoos. He got his start working with an older artist at a shop called Bad Brothers. “Many of us were indeed influenced by Chicano culture, but we adjusted it to our own styles,” he says. “Thai artists receive a lot of influence from abroad, but we don’t always copy them. We maintain the Thai characteristics.” 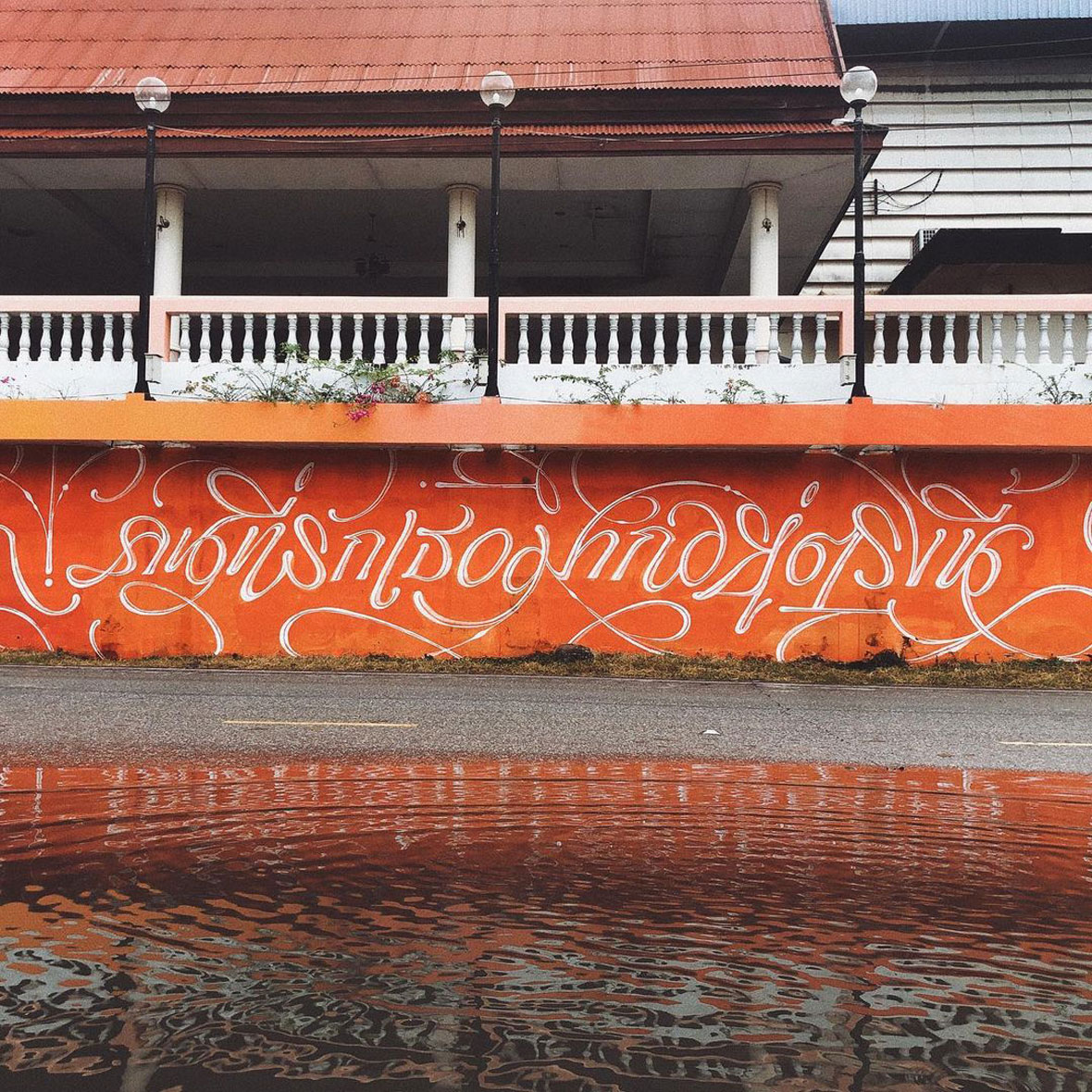 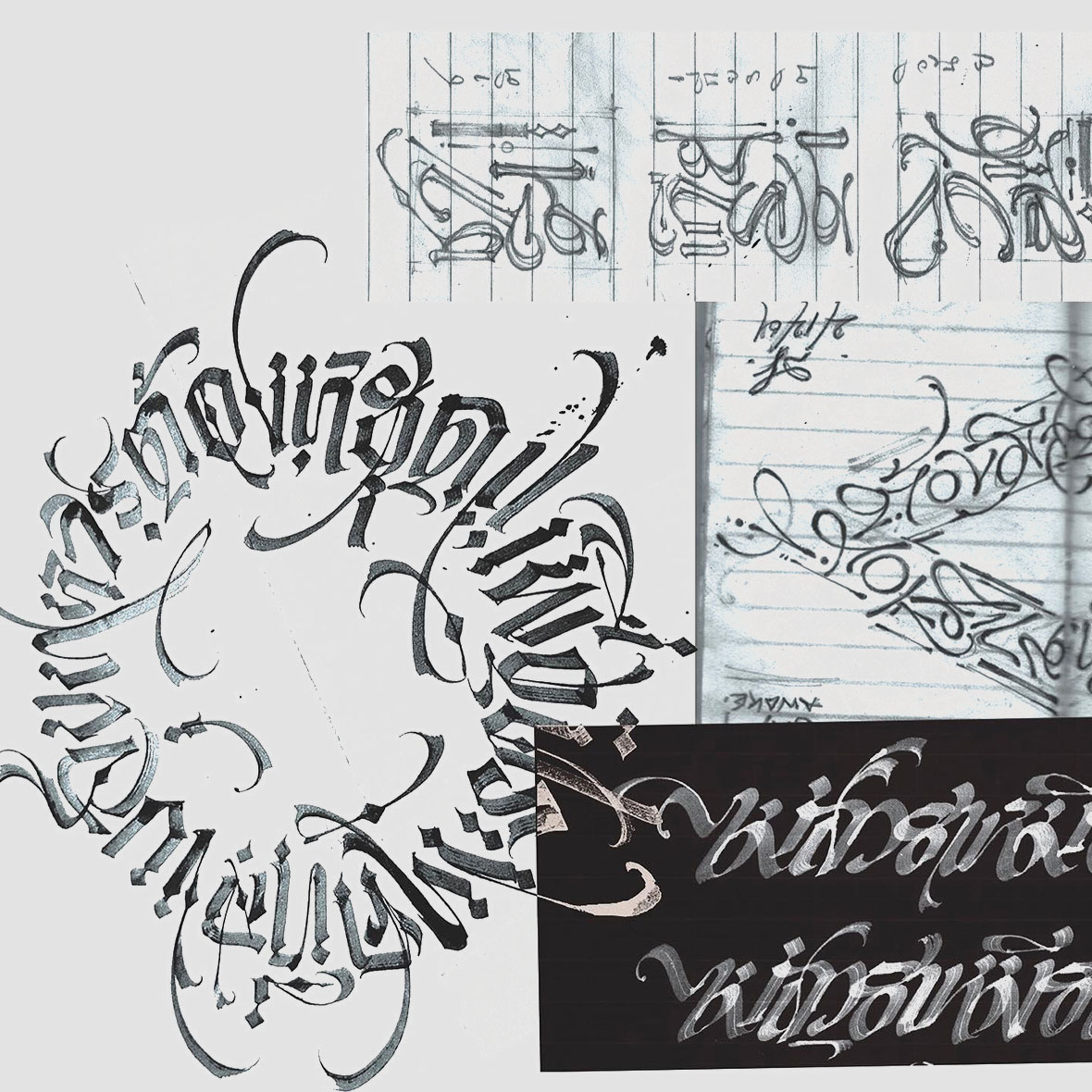 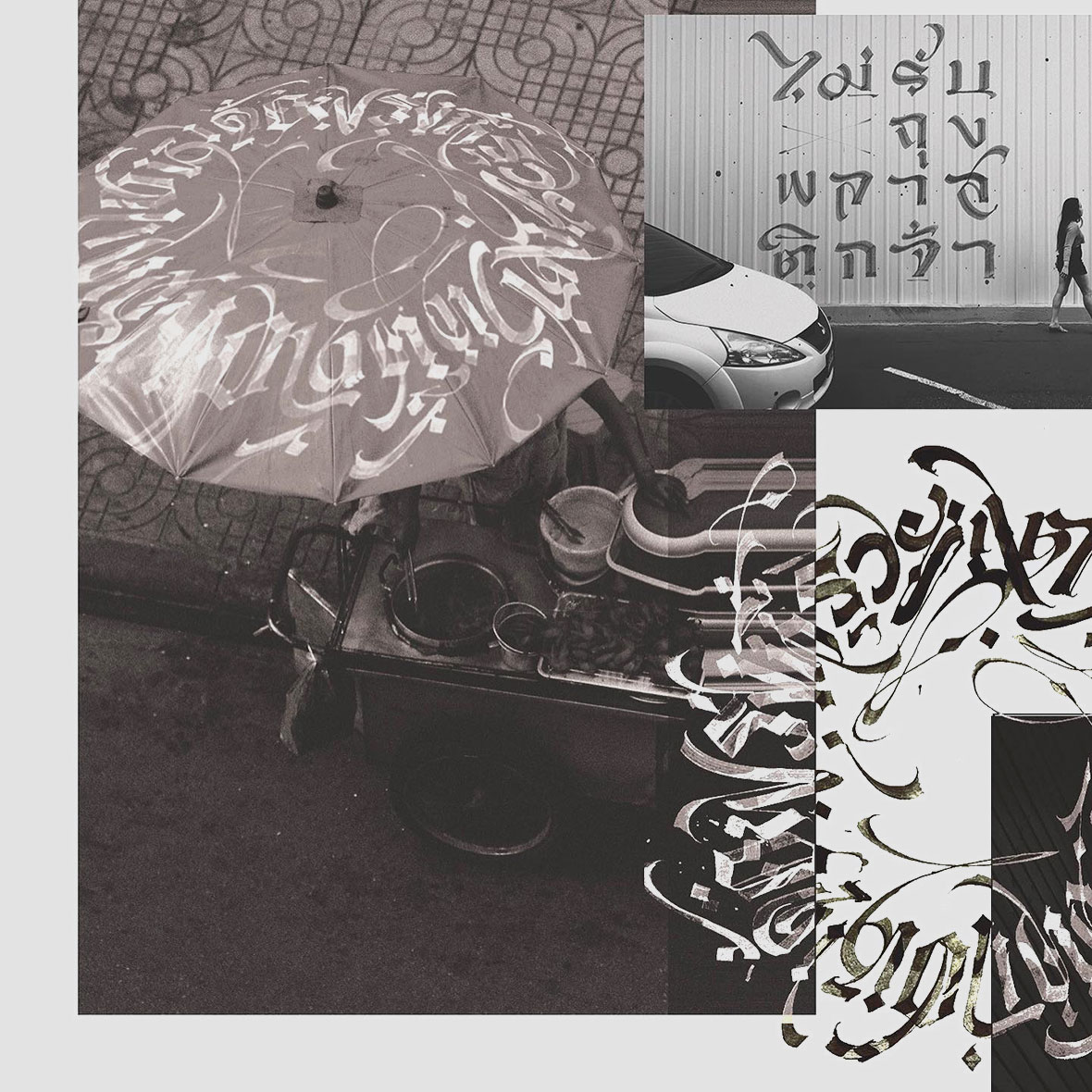 While most artists recognize the influence of Chicano lettering in Thailand, they don’t all relate to it personally. Korn Kittiligraphy, for example, credits Russian calligraffiti artist Pokras Lampas as his main inspiration. “I see Chicano inspiration in Thailand as an imitation of someone else’s culture, so I don’t care much to use myself,” adds Tach Saranyatach, an artist better known as FCKNGNS. He cites European artists and philosophy as being more influential. His style and content is particularly aggressive. The letters are razor-edged, almost brutal, and feel relentless in their repetition of marks. The messages he delivers are a pairing of bleak nihilism and outspoken defiance, with phrases such as “Kill the Rich” and “Long Live Death.” Still, he points to tattoo shops like King Star and its owner Kling as influential pioneers in Thailand, noting that they’ve worked with Chicano styles since 1998.

“In my opinion, contemporary calligraphy in Thailand comes from two main strands. One stems from an interest in fine arts and hip-hop culture. The other is an interest in the history of written characters and linguistics,” agrees Phasukdee (BlackThoracic), placing himself in the latter category. 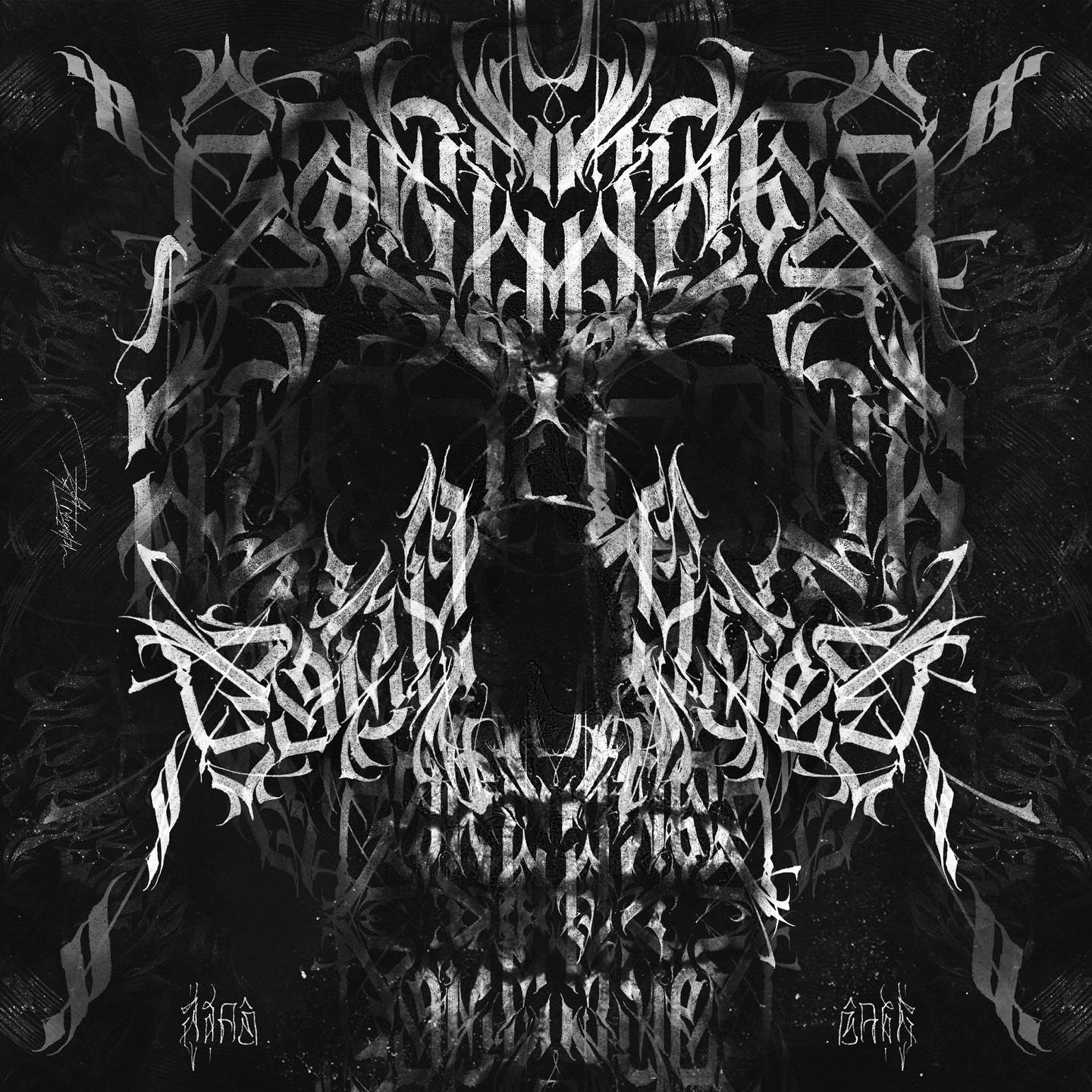 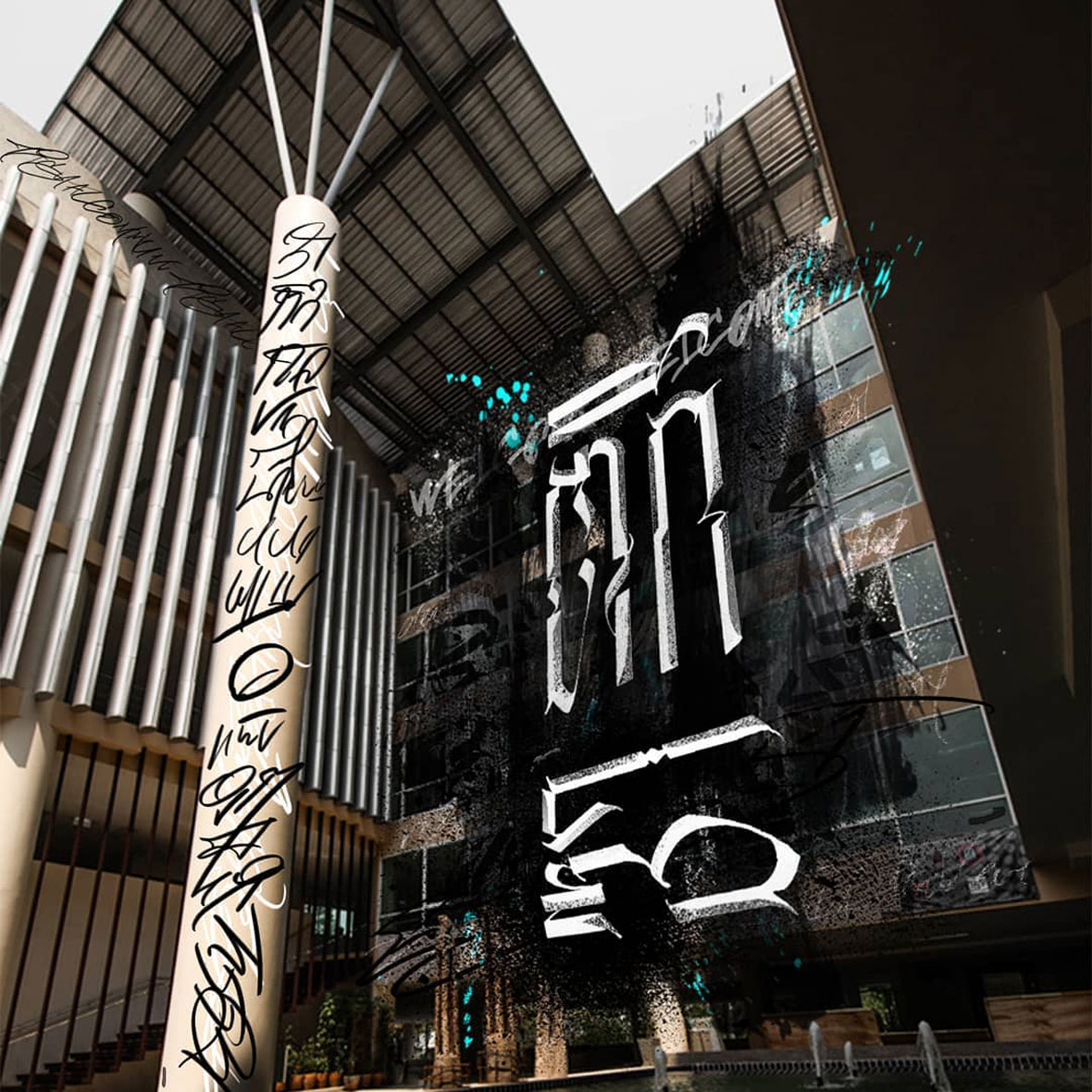 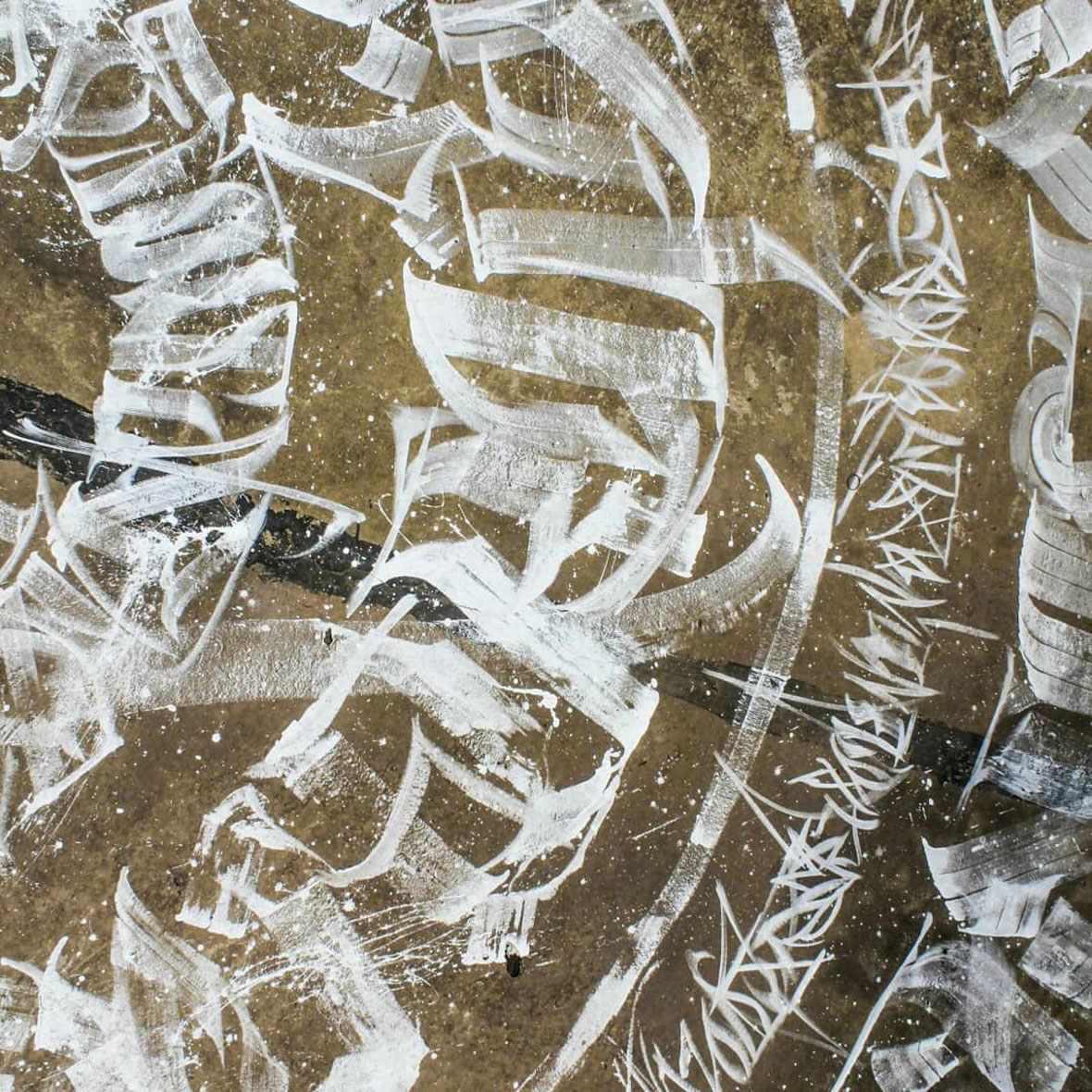 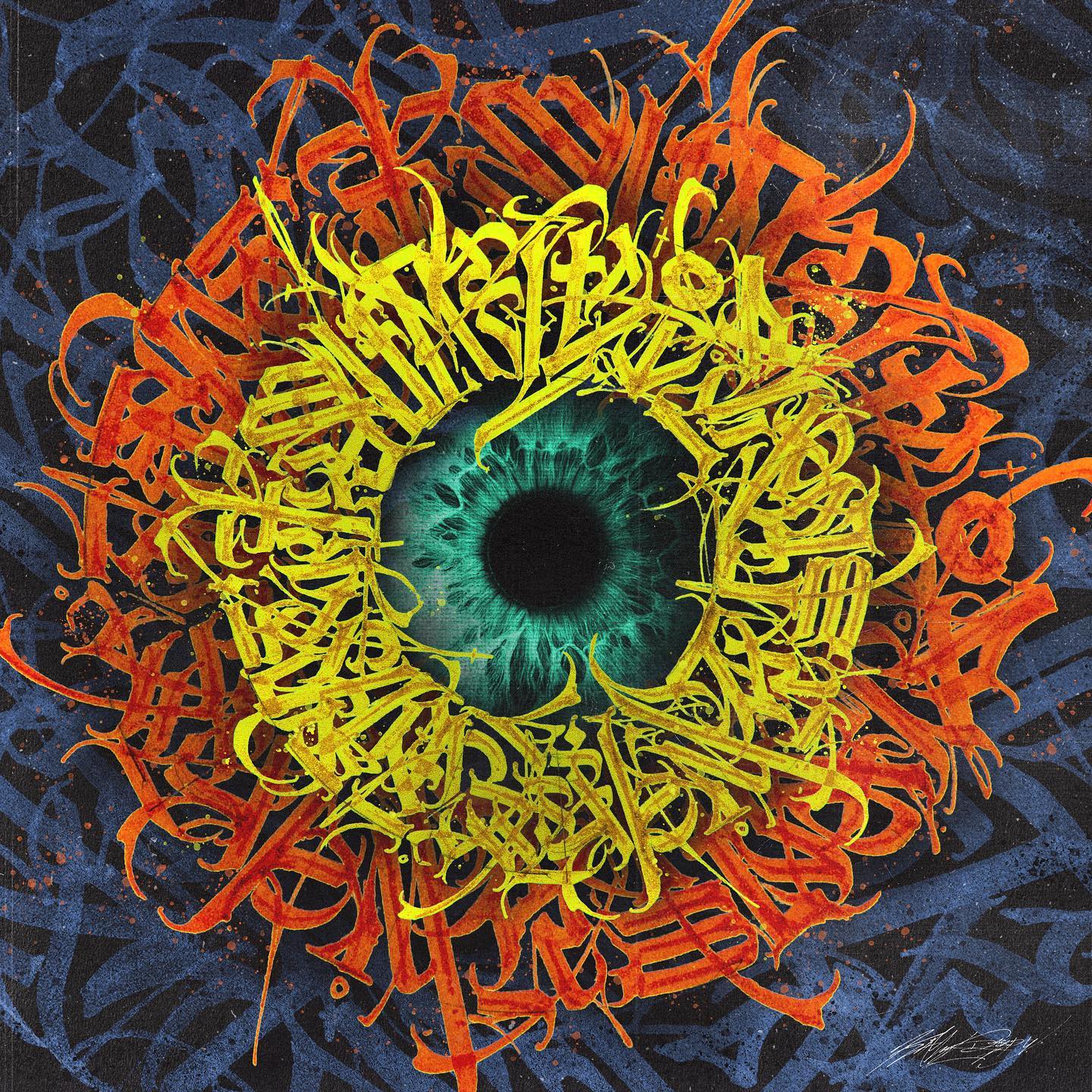 Sorravis Prakong is another Bangkok born-and-raised artist who has been toying with letters since childhood. “When I was in elementary school, I’d peek at friends’ notebooks and copy their writing style. I’d also forge parents’ signatures for friends,” he laughs. He continued exploring the potential of type throughout his life, and although he studied jewelry design at university, he continued to pursue his passion for letters the whole time.

The majority of Prakong’s work is written strictly in Thai, and the roots of his style often come from his home country as well. “A lot of my inspiration comes from old shop signs I’ve passed along the road. I adjust, mix, and experiment with them until I have a new design.” He also points to movie posters and old Thai advertisements as foundational to his work. “One style I’m excited to work with is the classic Thai Naris font. It’s a traditional style that’s difficult to find these days, but I want to bring it back for our era.” Thai Naris was one of the first loopless scripts from the turn of the 20th century and was used for official documents. Thai traditionally has circular loops along the corners and this style simplified the text, cutting off that extra flourish. It loaned itself well to reproduction which led to widespread use across the country for signage, advertisements, and the printing press. Many of the recent scripts Prakong has created are Thai but rooted in blackletter, with long, flowing tails and chunky shoulders and eyes. 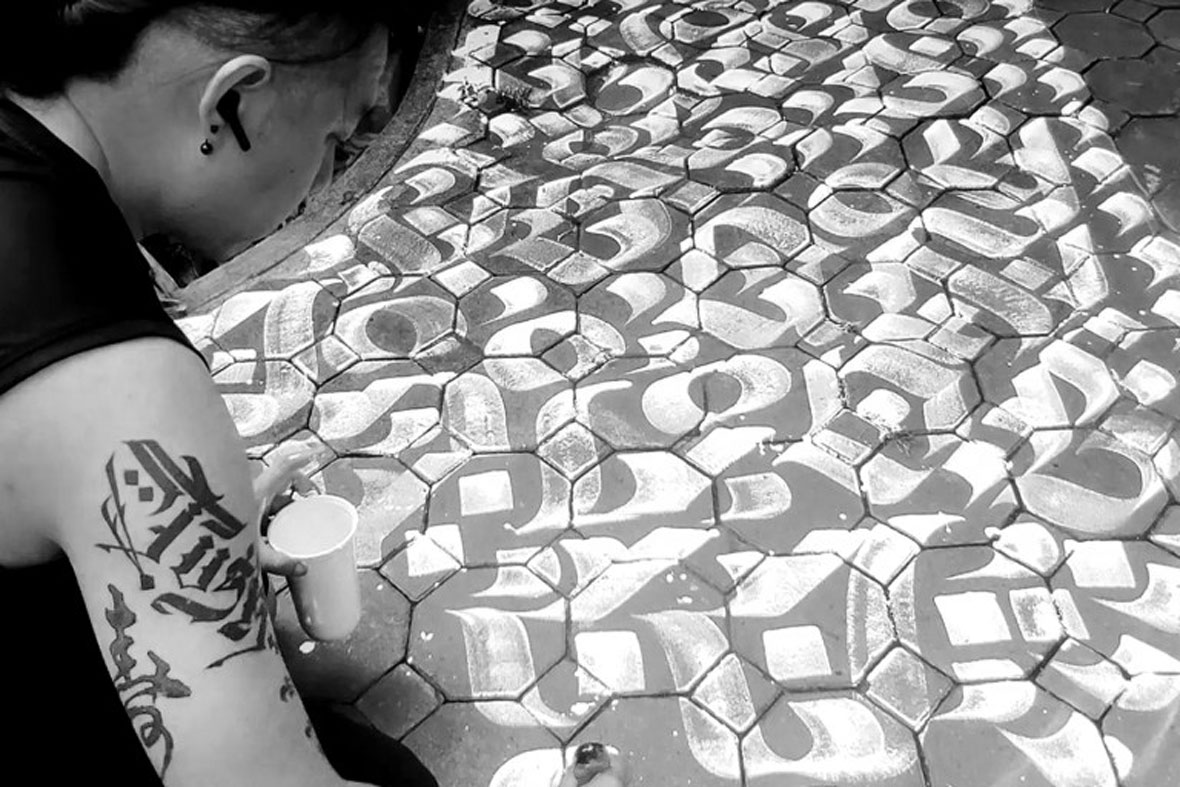 Other artists explore Thai scripts as well. Ajahnman is a tattooist in Koh Phangan, an island in the southeast popular with tourists, who combines modern calligraphy with traditional sak yant tattoos. His letters mix hard, straight lines with luxurious looping curves. They stretch upward, often following the form of fluke yarn, which swirls with mad energy until rising above in a calm, focused line.

And Tusk is from Northern Thailand, where the ancient Lanna script is being resurfaced after being suppressed by nationalists in the 30s. He combines it with global styles like Cholo lettering, old English, and Japanese calligraphy, which is called shodo. Historically called Tua Tham or Tai Tham, Lanna had been the primary written language in the region, but it’s no longer used in daily life anymore. To learn it, he had to go to temple where monks have kept the practice alive. The script comes in two forms, either the harder-edged version of Khmer script used to write Thai—which is Tusk’s preference—or it takes the rounder, more circular approach of Burmese. 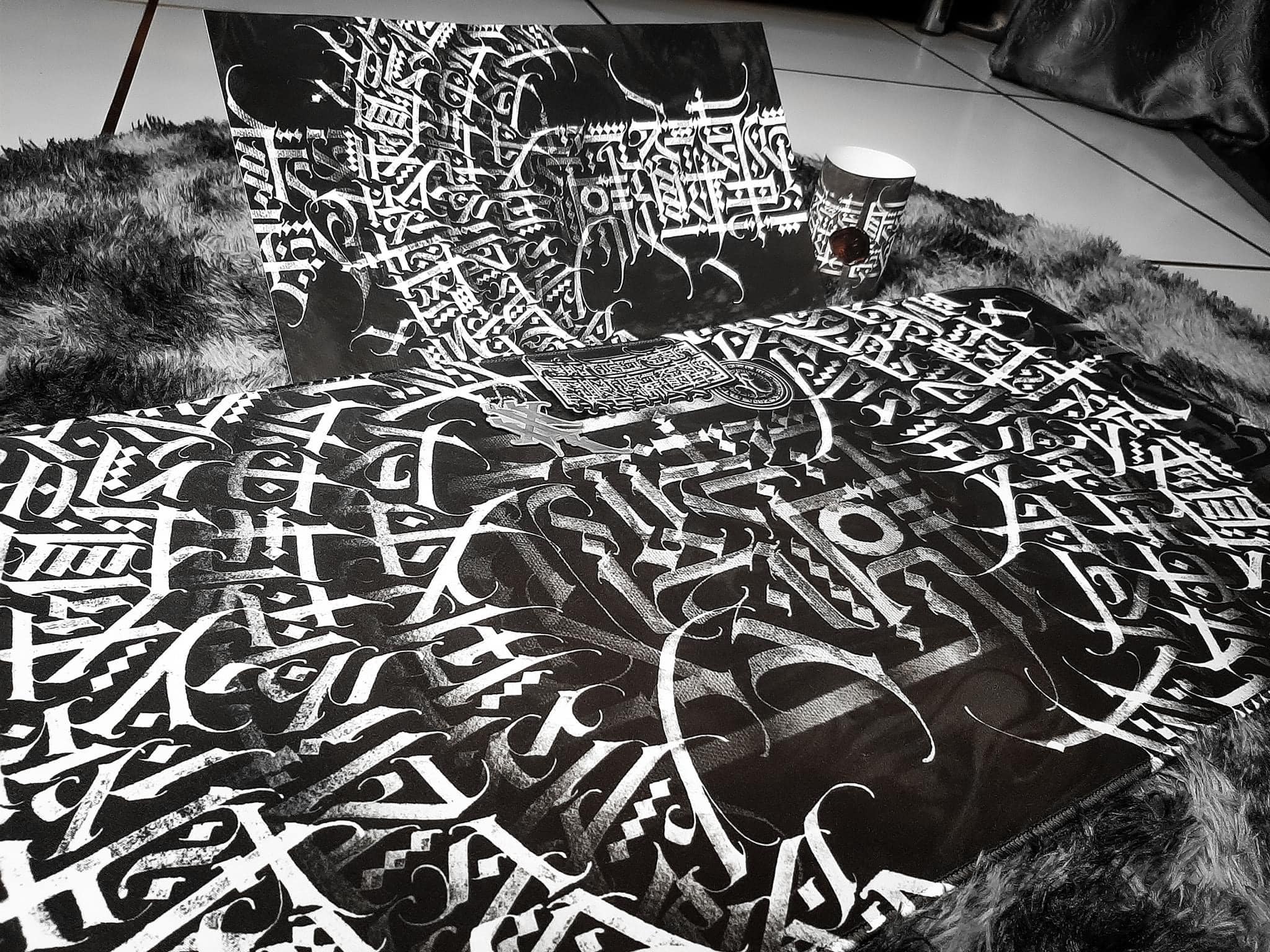 There are plenty of untapped local inspirations for younger artists to draw from, whether that be historic fonts, the local printed word, or storefront signage. But even if they choose to look abroad for direction, to Europe or Mexican-Americans, today’s artists have certainly proved they’re capable of making them their own. None of these artists simply recreate anything, they take all this input and use it as a jumping point for something new but explicitly Thai, regardless of inspiration. And the next generation can take that even farther in new directions. After all, nothing comes from a void.