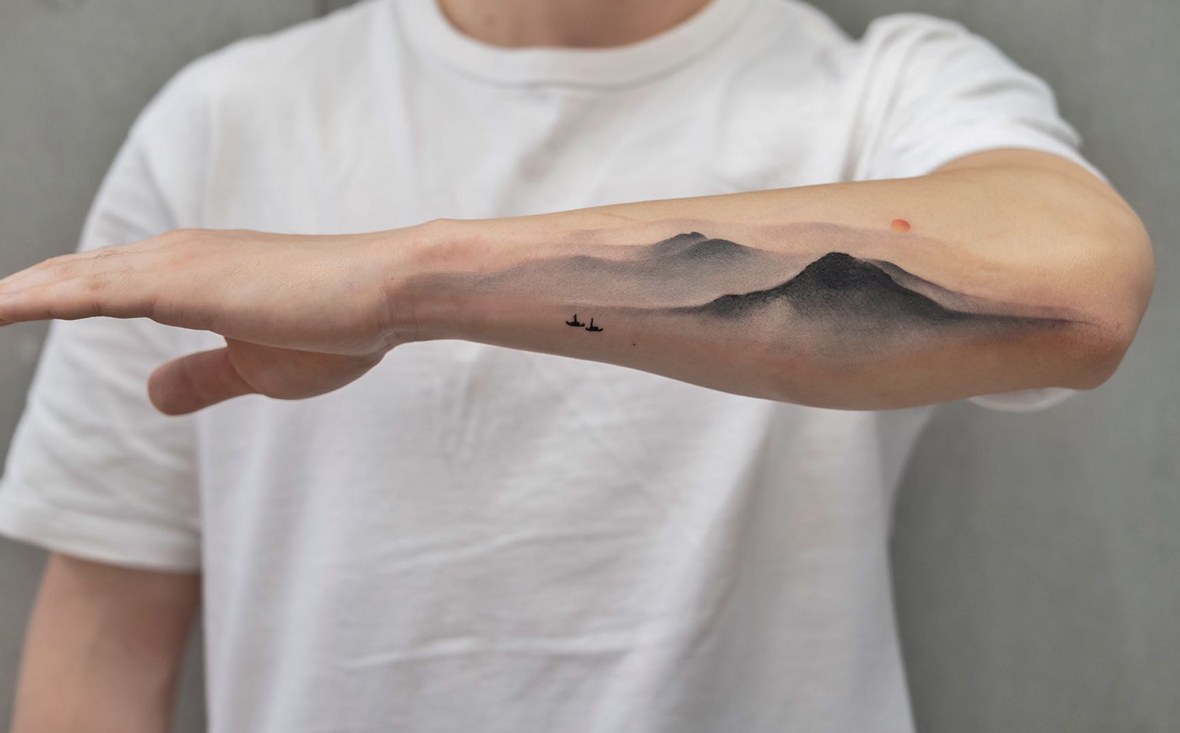 In China, tattoos have faced stigmatization for many years, often being associated with thugs and gangsters. It’s a stigma that can perhaps be traced to the Cantonese box-office hits of the 1990s, such as Young and Dangerous and A True Mob Story, which depicted machete-wielding hooligans with a devil-may-care attitude and inked skin. These preconceptions around tattoo art have led to its poor reputation, especially in white-collar professions. In recent years, the Chinese government has even issued a decree banning tattoos from appearing on television, further cementing body art as a mark of disgrace. Even if international superstars are free to show their inked skin on Chinese broadcasts, local celebrities are held to a different standard.

But in reality, body art has long been a part of Chinese culture, dating tens of centuries back. From being a Song and Yuan dynasty custom to body art references in old literature, tattoos haven’t always held such negative associates. Sure, during certain periods of time, branding criminals with permanent tattoos served as a form of punishment, but for even longer periods, they were seen as symbols of courage and power. For example, in Treatise on Geography from the Book of Han, a passage reads, “A man with short hair and inked skin can repel scaled dragons,” which is linked to the belief that tattoos can infuse an individual with draconic powers and allow them to conquer any hardship. The 14th-century Chinese novel Water Margin, offers yet another example of how tattoo art used to be seen under the public eye—Shi Jin and Yan Qing, the celebrated protagonists of the book, were described as ink-covered vagabonds. 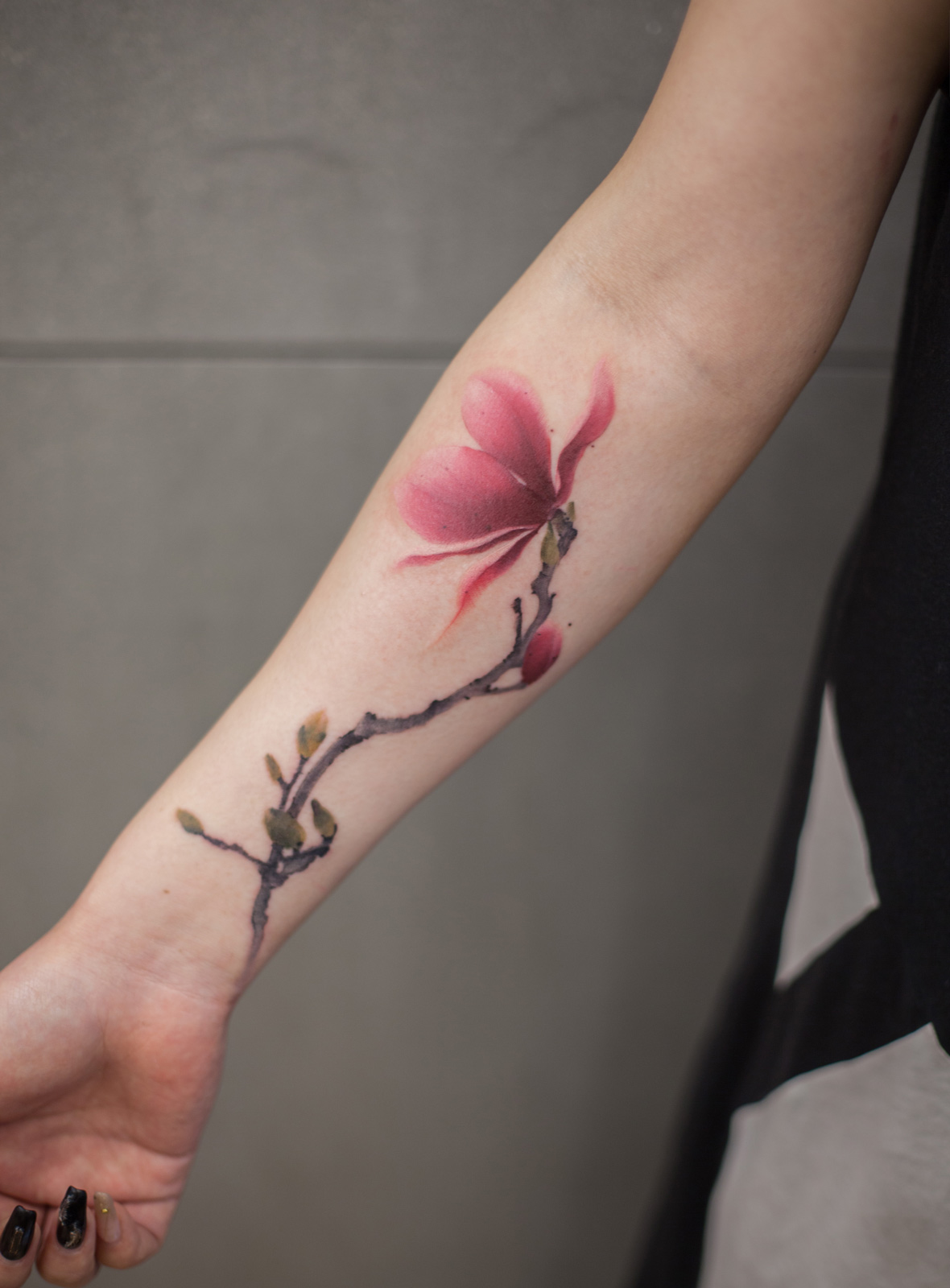 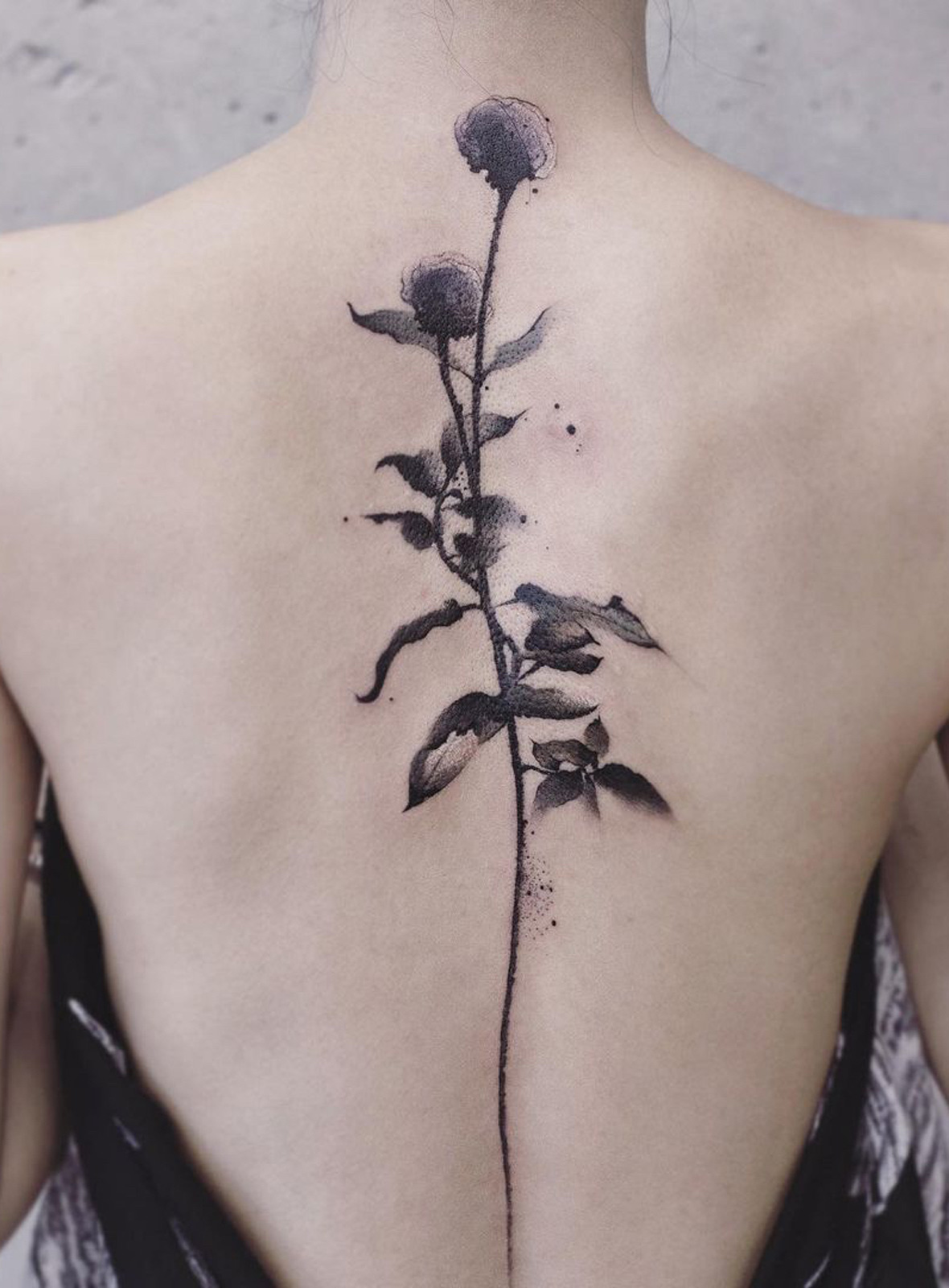 In modern-day Beijing, tattoo artist Chen Jie creates her art with the pride of Chinese tattoo’s earlier lineage. Her works are a departure from conventional tattoo styles, with an aesthetic that more closely resembles Chinese ink-wash paintings. Under her needle, a menagerie of wildlife flutters to life atop forearms; lush prairies and glistening streams surface from tendon and muscle; while plum orchids, blossoming chrysanthemums, and bamboo groves sprout freely from bare patches of skin. The colors, details, and exacting line work with which Chen approaches each piece demonstrates an impressive mastery of her craft, and her unique style of tattooing carries an appeal that can be appreciated by even those unacquainted with the art form.  As such, she’s garnered her much-deserved attention both at home and abroad. “Japan has ukiyo-e style tattoos, Europe and the U.S. have old-school and new-school tattoos,” she says. “What I look to achieve is my own distinctive style, one that stems from my own culture.” 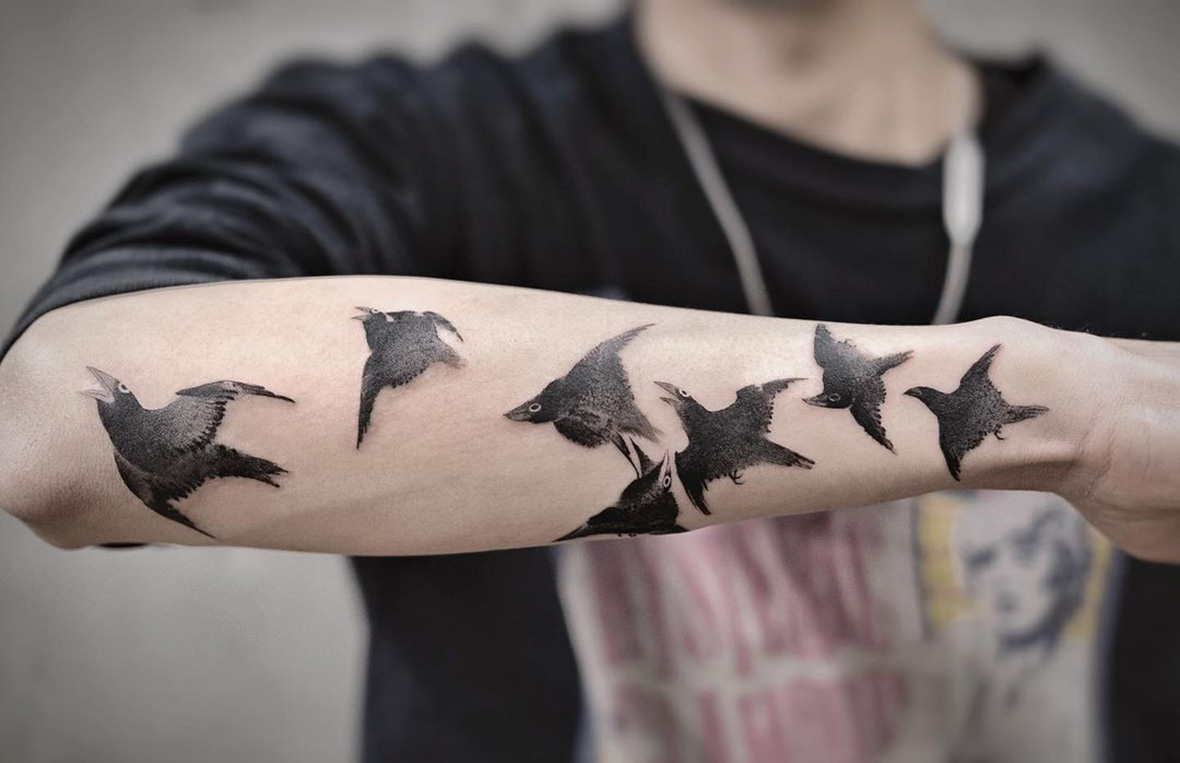 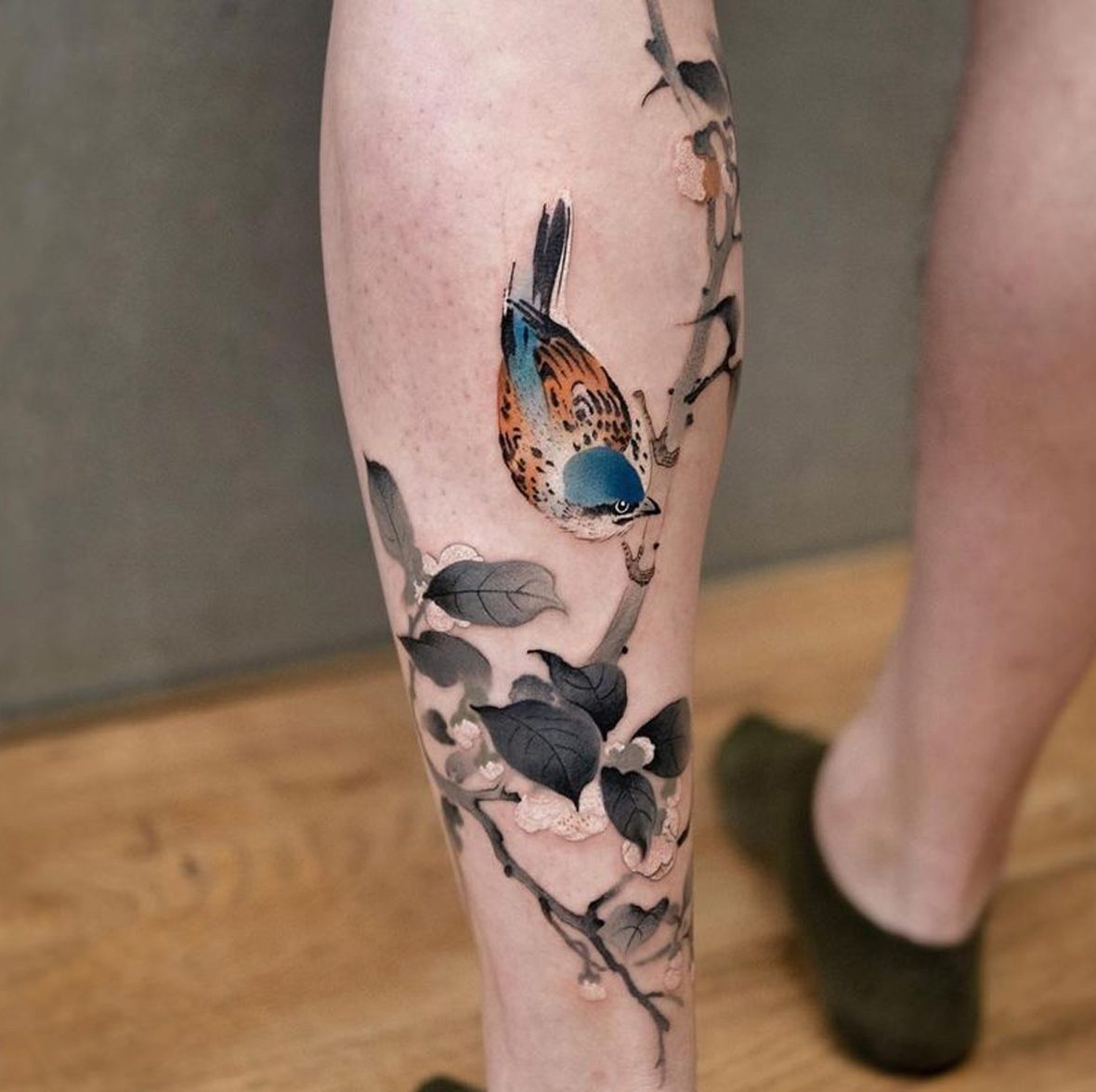 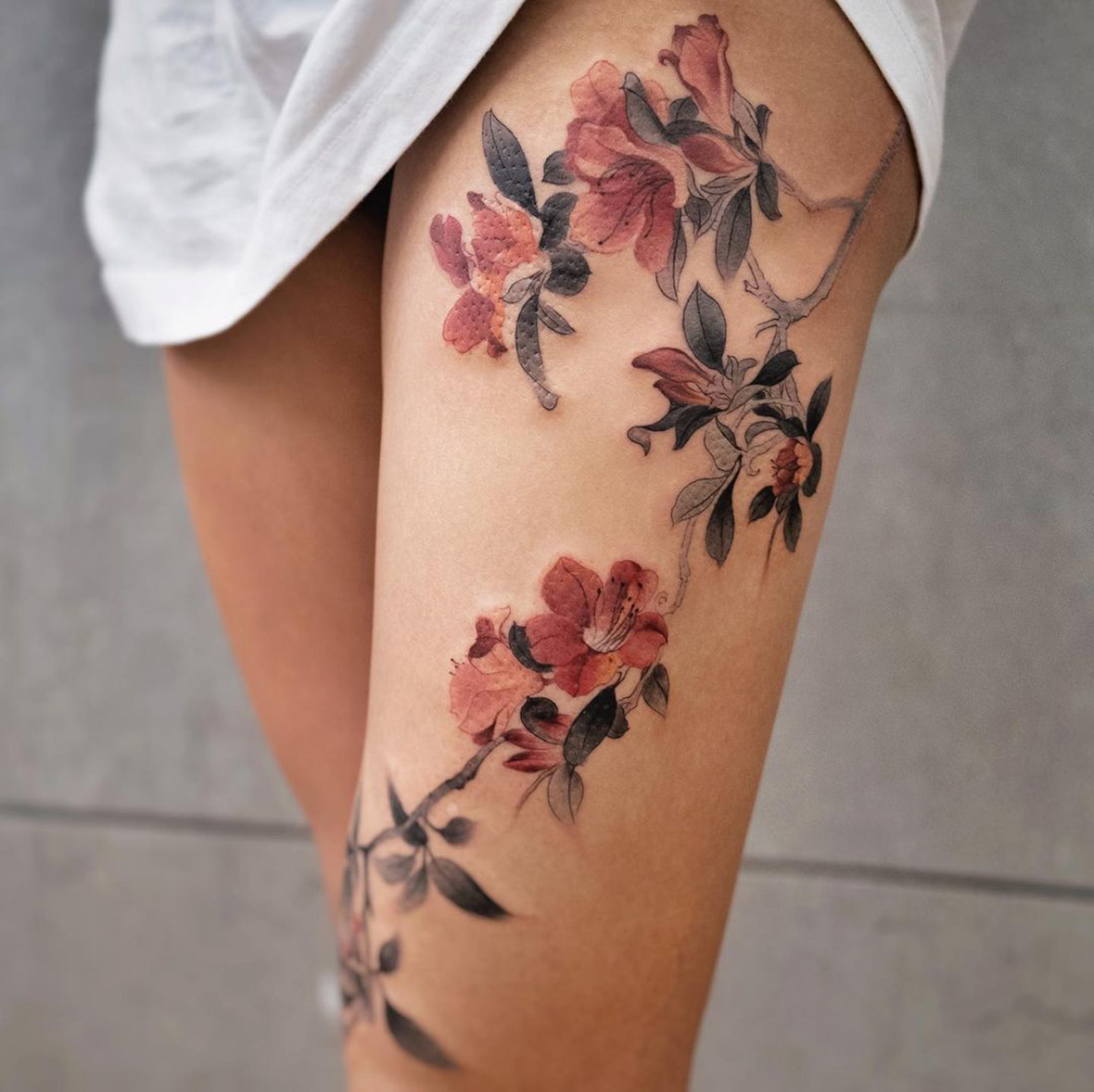 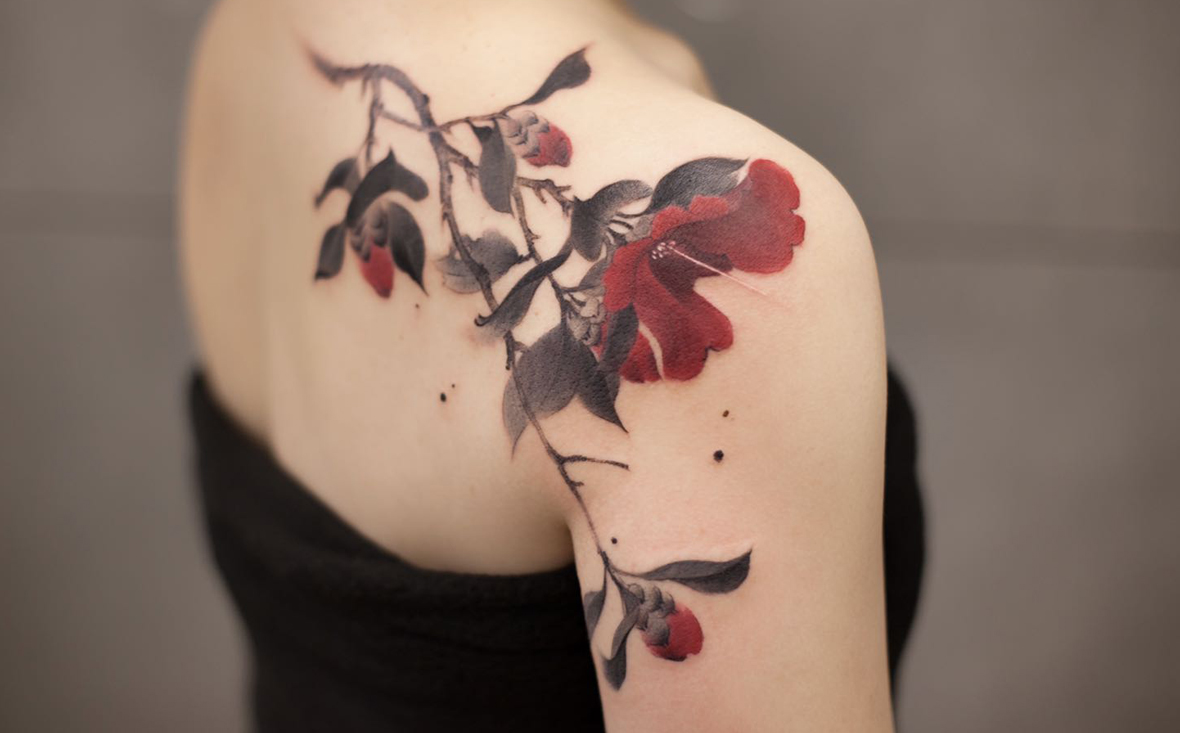 Chen’s tattoo journey began back in 2005. At the time, she was working as a real estate agent in Beijing. Every day, she had to pick up and drop off her father at work at what is now Beijing’s 789 Art Zone, which was then a factory lot. At the time, it was beginning the early stages of its transformation from an industrial zone to an art-and-design hub. Creatives of all stripes were beginning to set up shop there, and one day, a tattoo parlor by the name of Leng Yan Tattoo caught Chen’s attention. She soon began frequenting the small studio as a customer, adding one inked design atop another across her body. “At the time, I only thought tattoos looked good and had a certain attitude to it,” she recalls. “But I’ve loved art from a young age, so I quickly found myself deep down the tattoo rabbit hole.” As her interest in the art form snowballed, she went from client to apprentice and quit her real-estate job to pursue a career in tattooing full-time.

Back in 2005, tattoos were an even more niche form of self-expression in the country. Many believed that only lowlifes would defame their bodies in such a way, but that didn’t stop Chen from pursuing what she loved. “When I decided to pursue a career in tattooing, my family objected,” she says. “They didn’t consider it a serious profession.” But she was tenacious—stubborn even. Now a 15-year veteran in the industry, she’s as optimistic as ever about China outgrowing the stigma around tattoos. 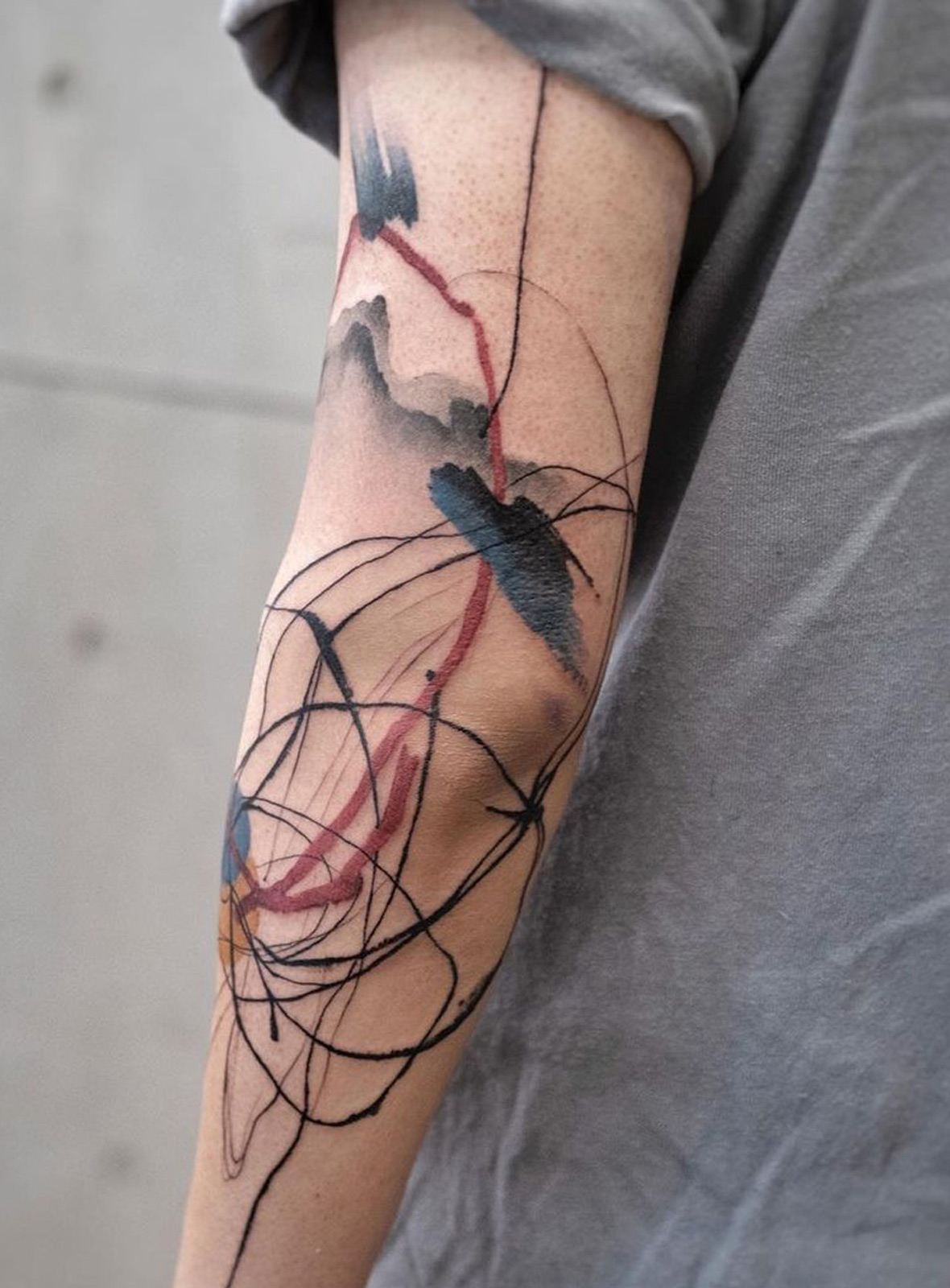 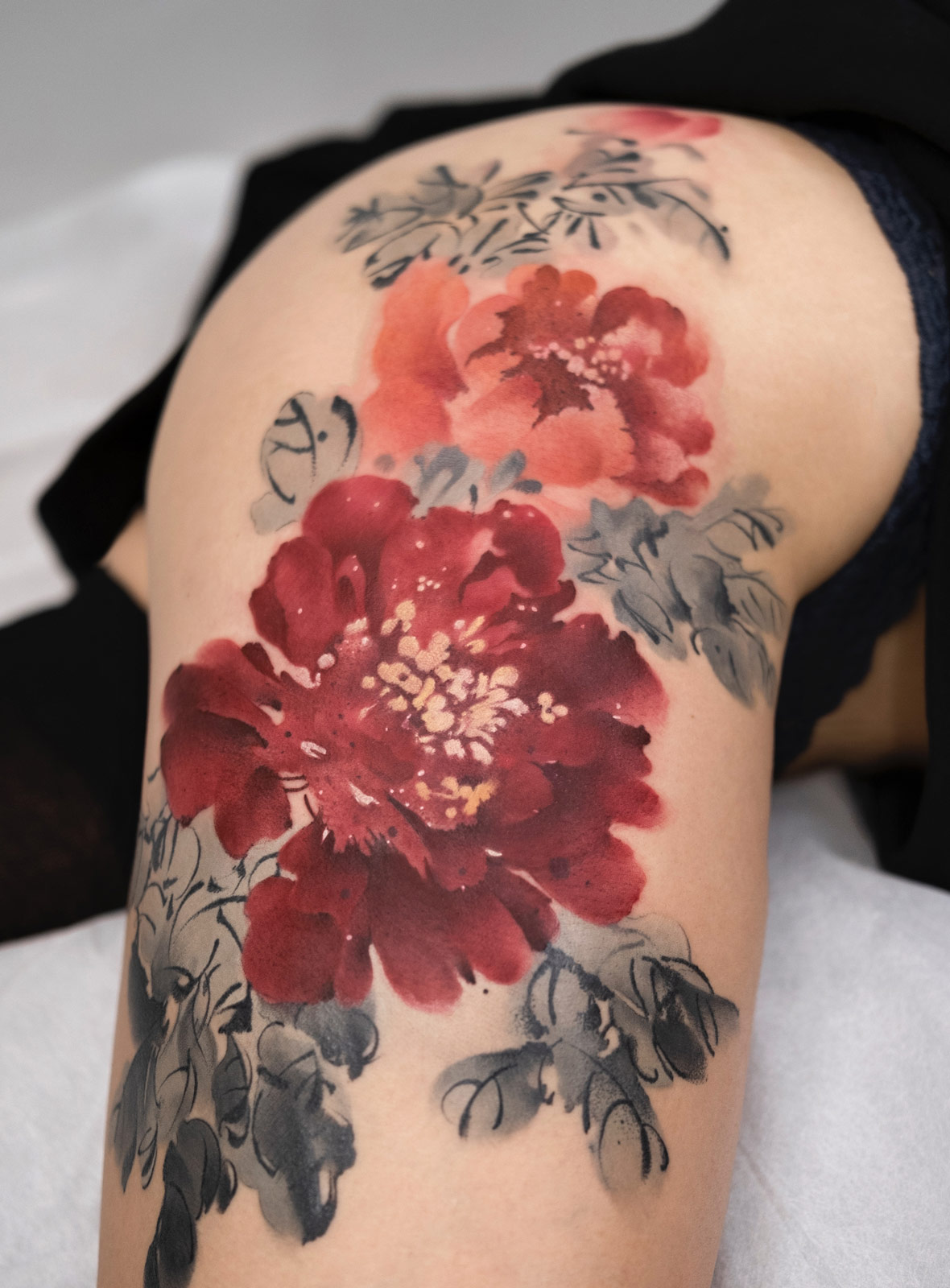 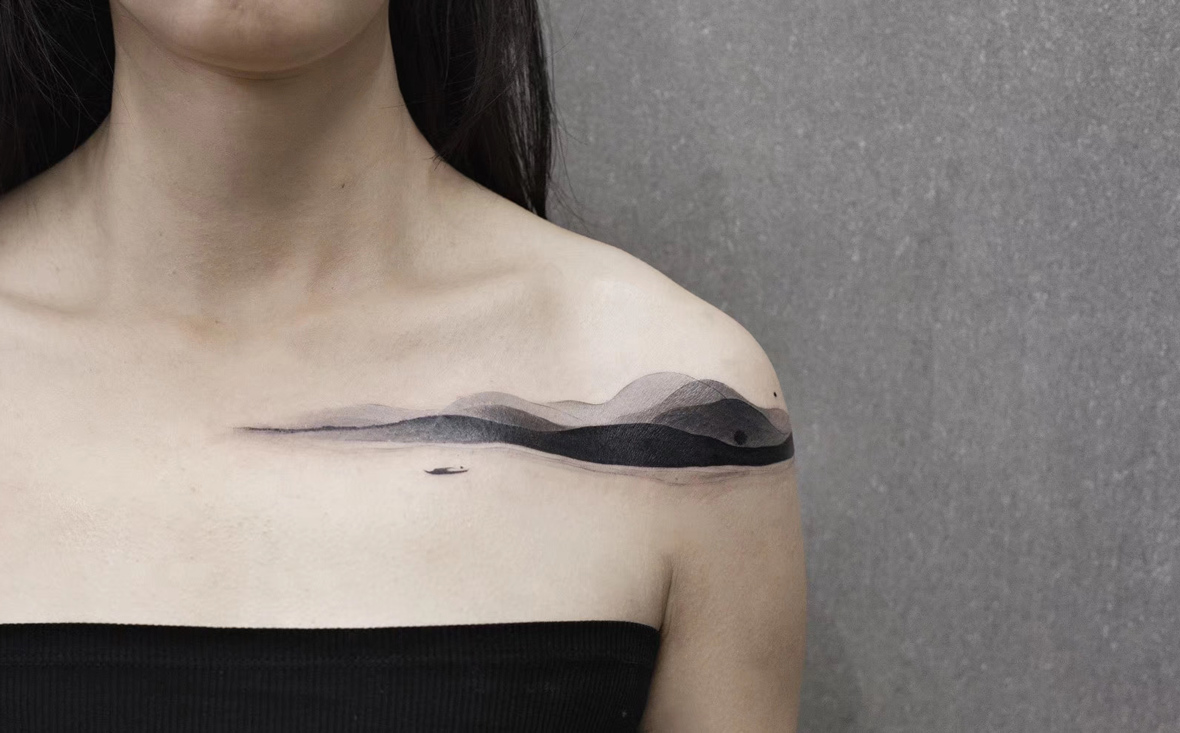 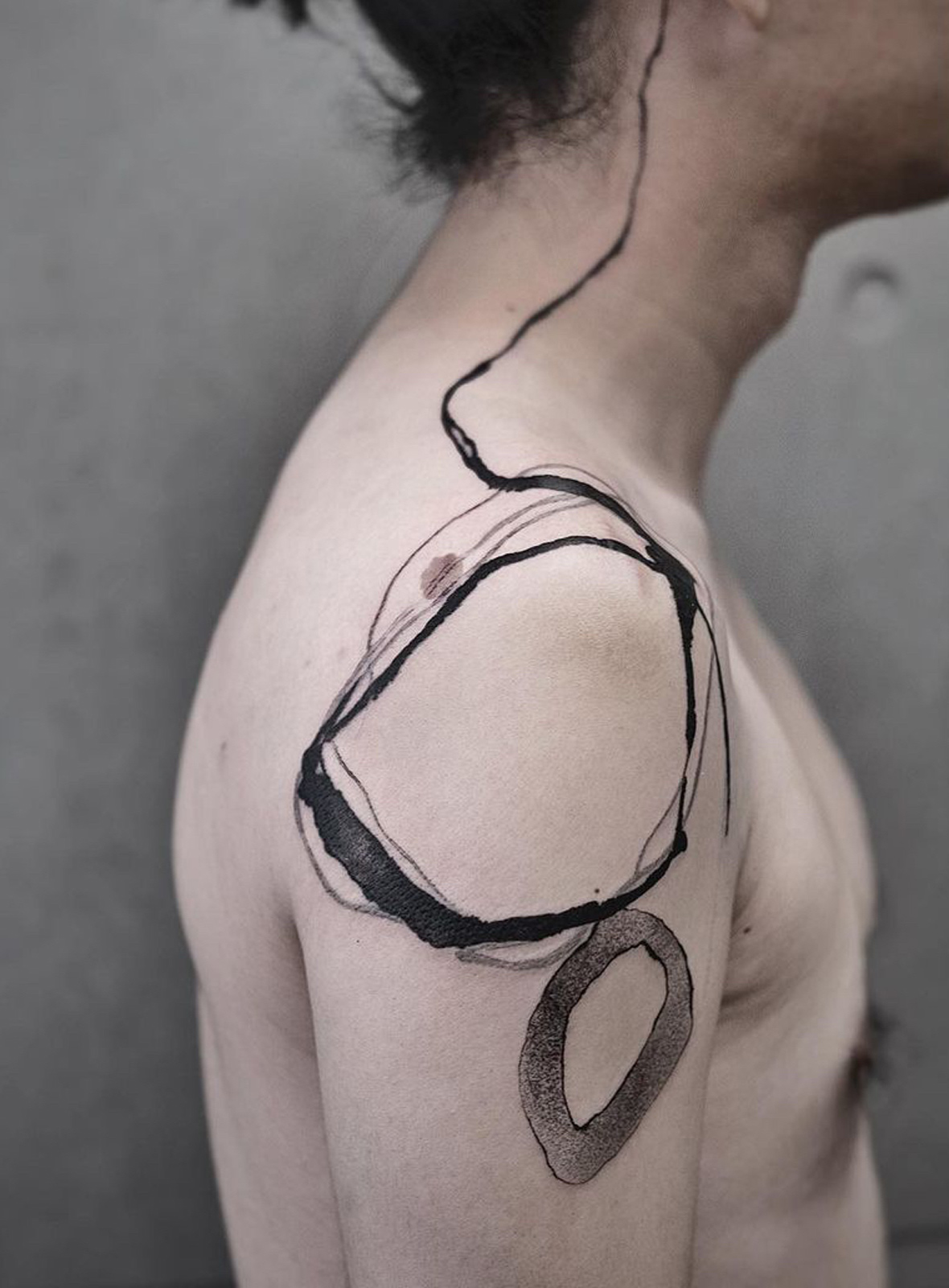 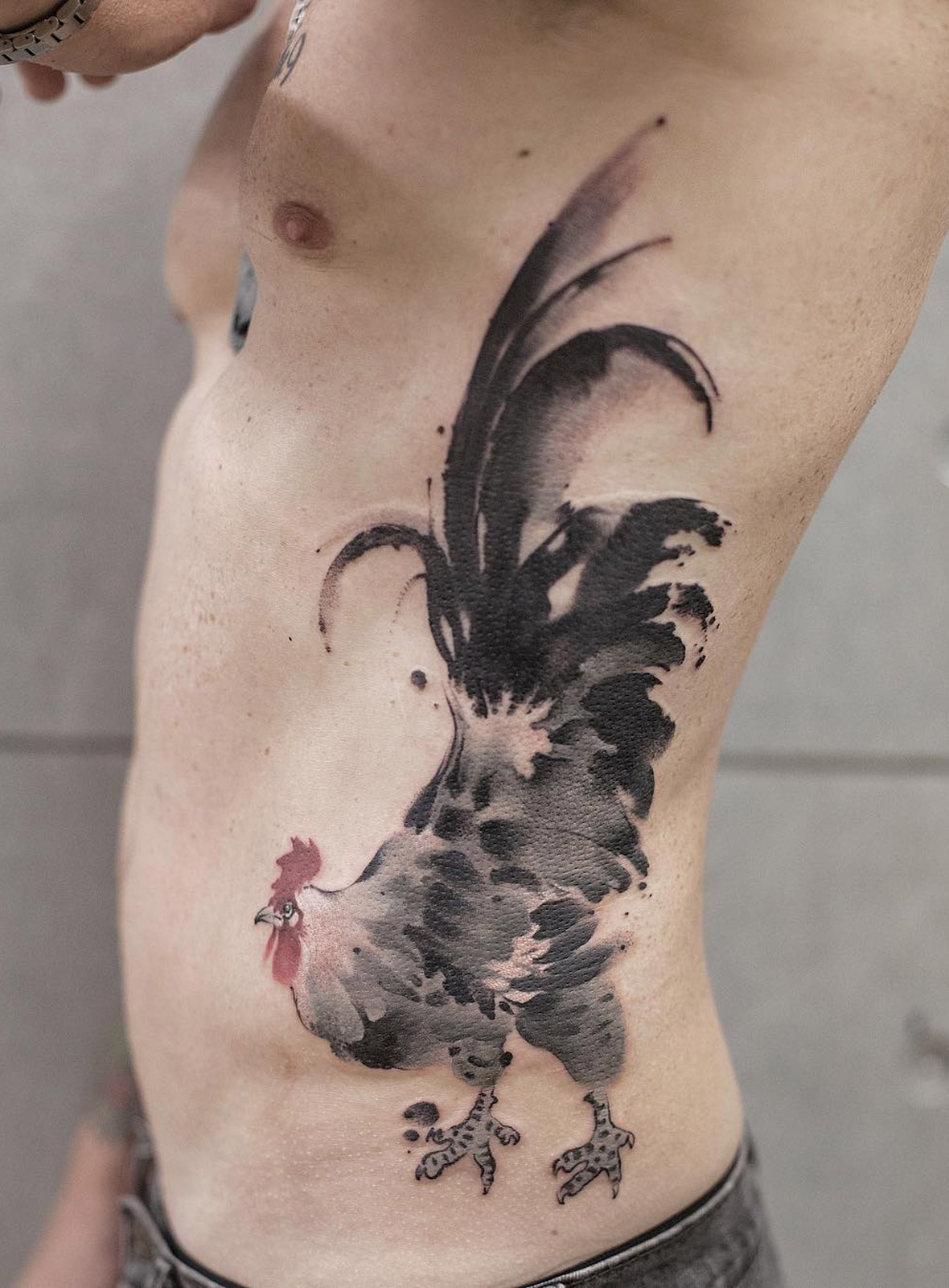 As Chen was exposed to more and more different styles of tattoo art, whether it be tribal, irezumi, or old-school tattoo, her ambitions of developing a style that she could call her own only increased. On a day like any other, when she was daydreaming in her living room, a generic Chinese peony painting that she had hung on the wall caught her attention. These paintings, mass-produced and popularized in China due to their associations with prosperity and peace, unexpectedly opened her creative floodgates. “Chinese culture dates back thousands of years,” she says. “There’s so much to work with, so why not bring the material to life through my tattoos?”

With this eureka moment came a new set of challenges. She was well versed in tattoo art by that point, but traditional Chinese art was a subject far out of her wheelhouse. To learn, she began looking into ink-wash painting, finding inspiration from and emulating the brushstrokes of the country’s most talented painters. The hard work and dedication paid off, as she’s now developed a distinctive style of tattoo art that blends the best of Chinese culture and Chinese art. 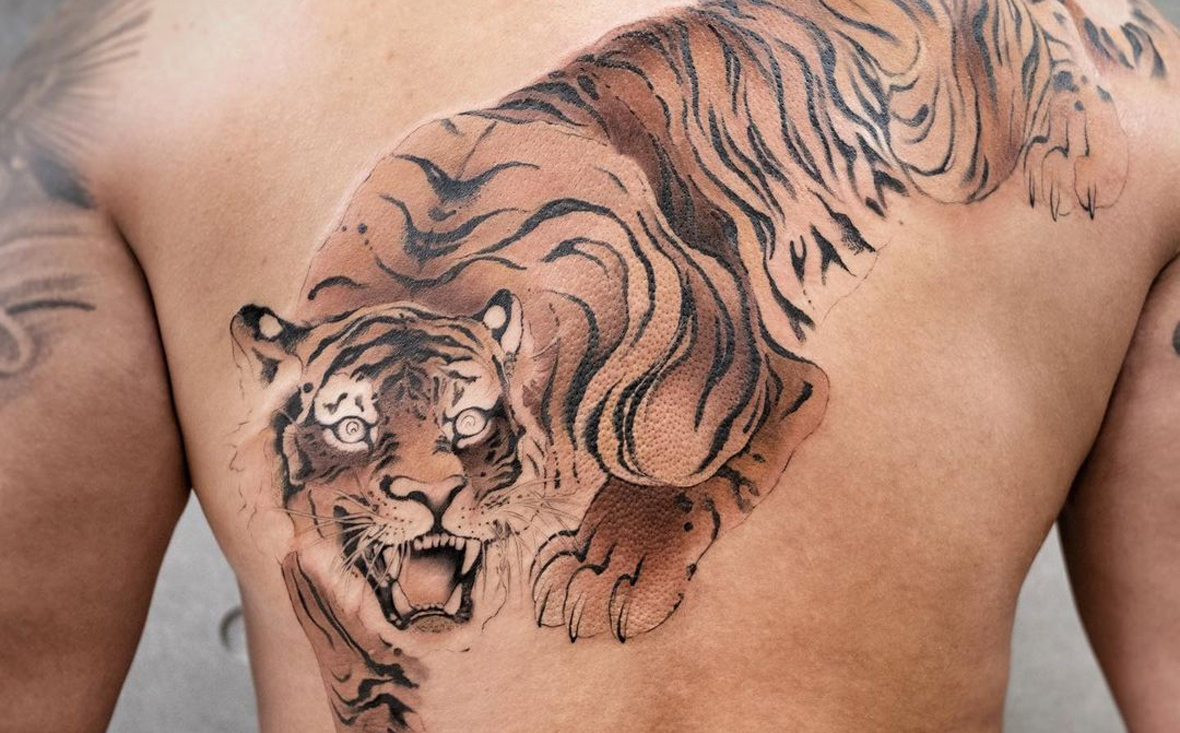 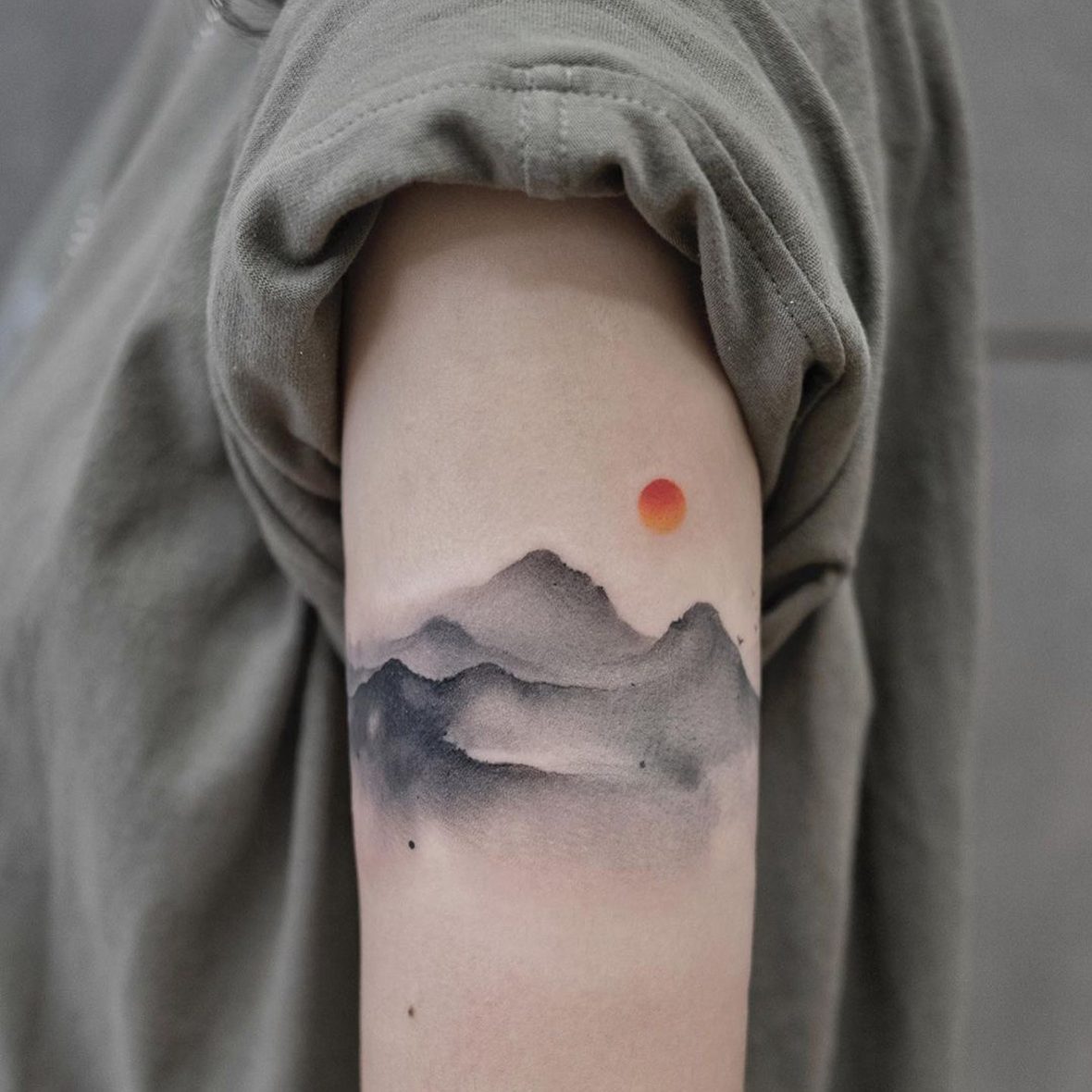 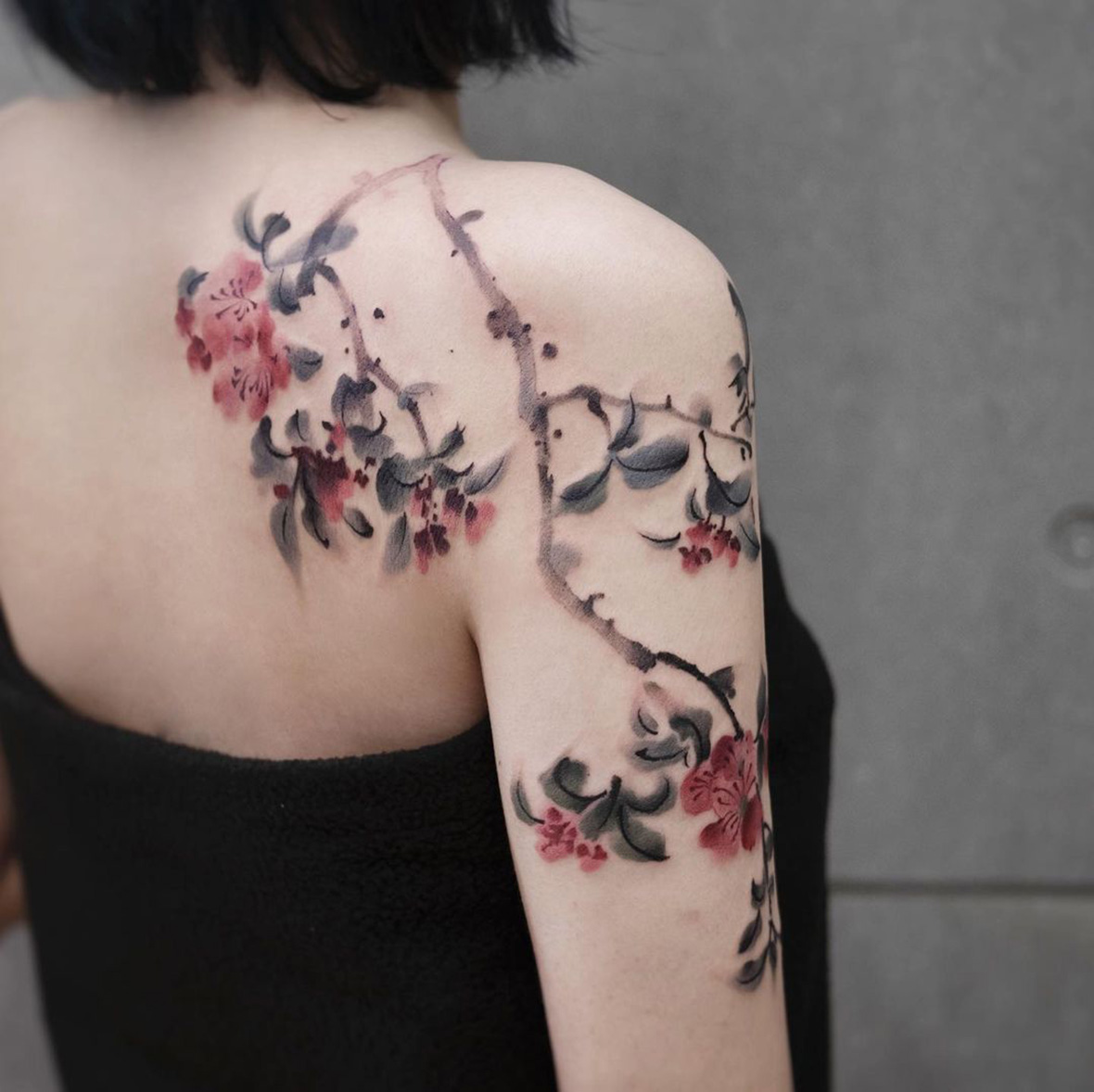 Due to the drastic differences between her past tattooing style and her tattoo reimagining of Chinese art, there was a steep learning curve to be climbed. It was especially tough to properly capture the weight, pressure, and flow of different brushstrokes, the way that ink distributes on paper, and so on. Electric tattoo machines were out of the question—they were far too clumsy. Chen settled on working by hand with a single needle, replicating the flowing grace of ink-wash paintings poke by poke, a time-consuming process to say the least. She also has to dilute the ink at different stages to ensure that the colors can match the gradience of a brushstroke. Although her tattoos aim to reinterpret Chinese paintings, there’s a degree of power and rhythm to her works that differentiates itself from traditional ink paintings. 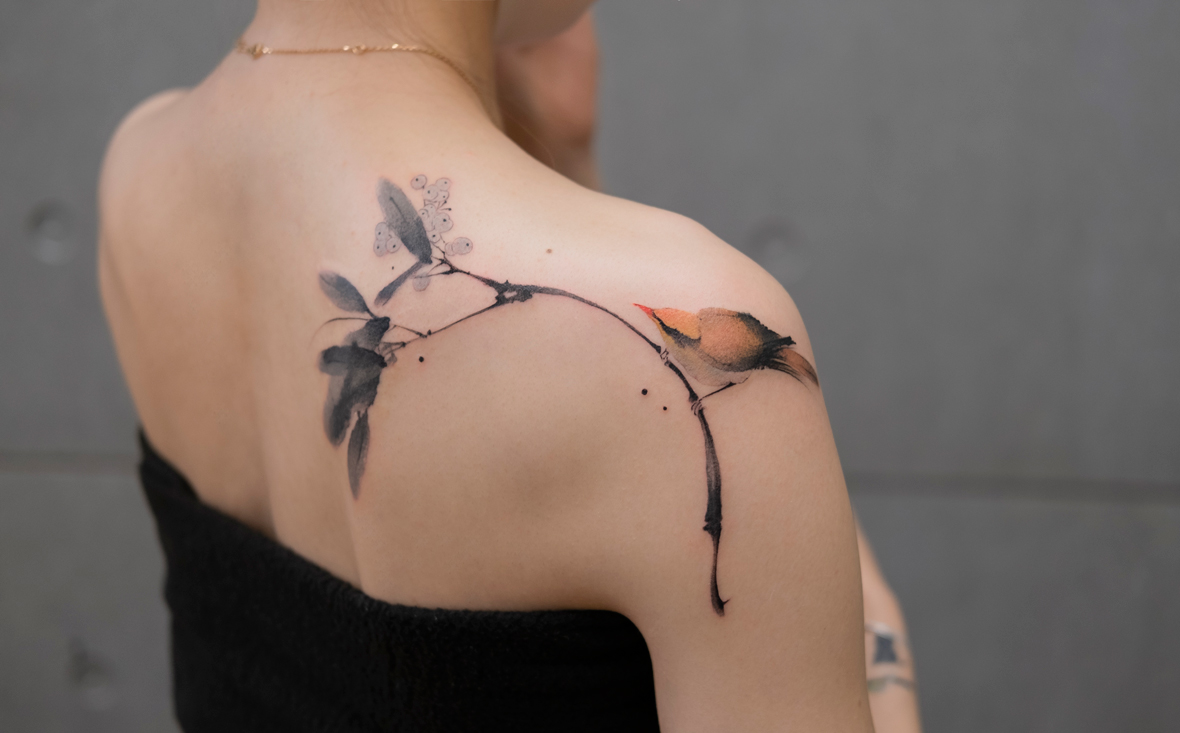 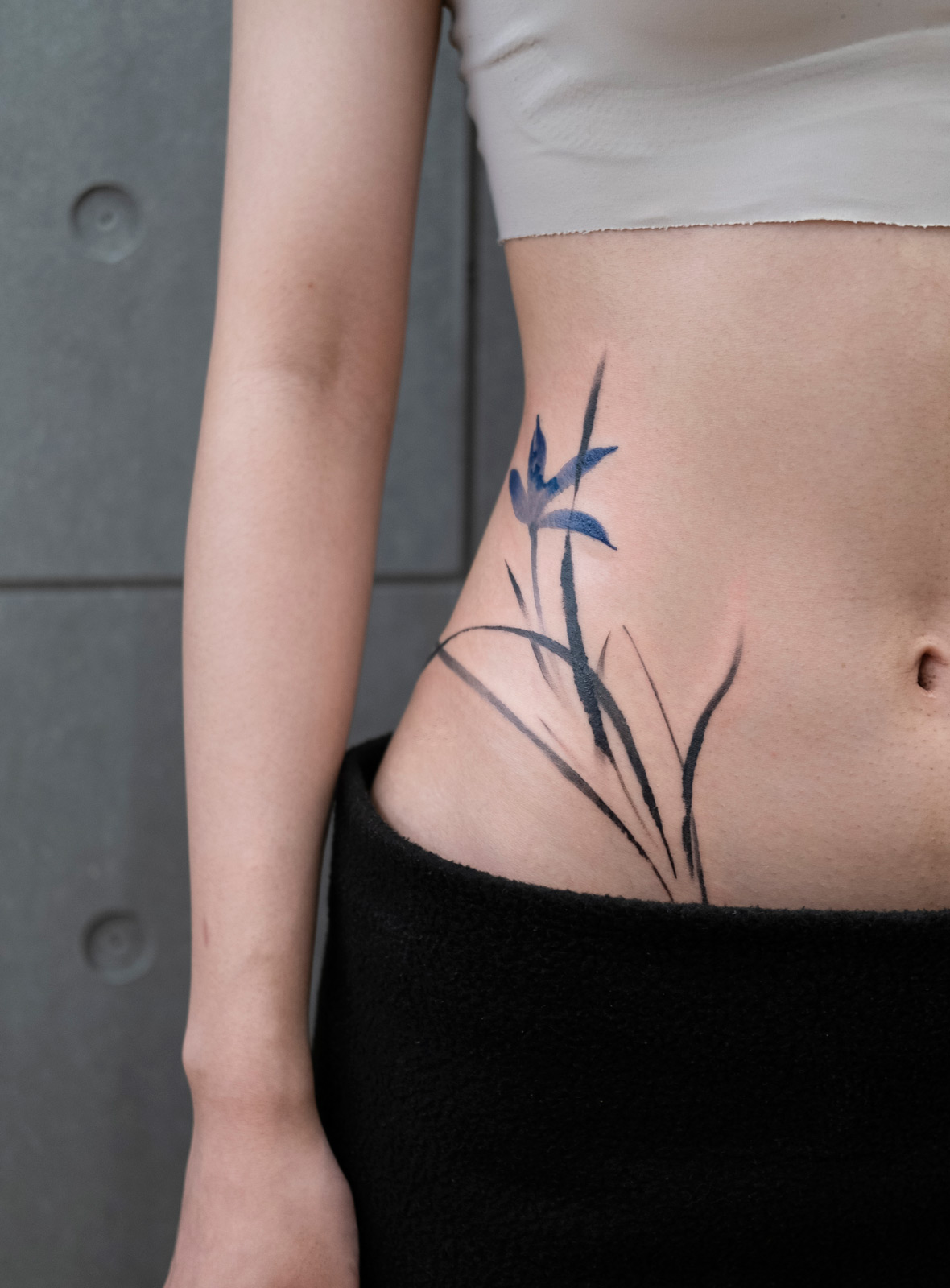 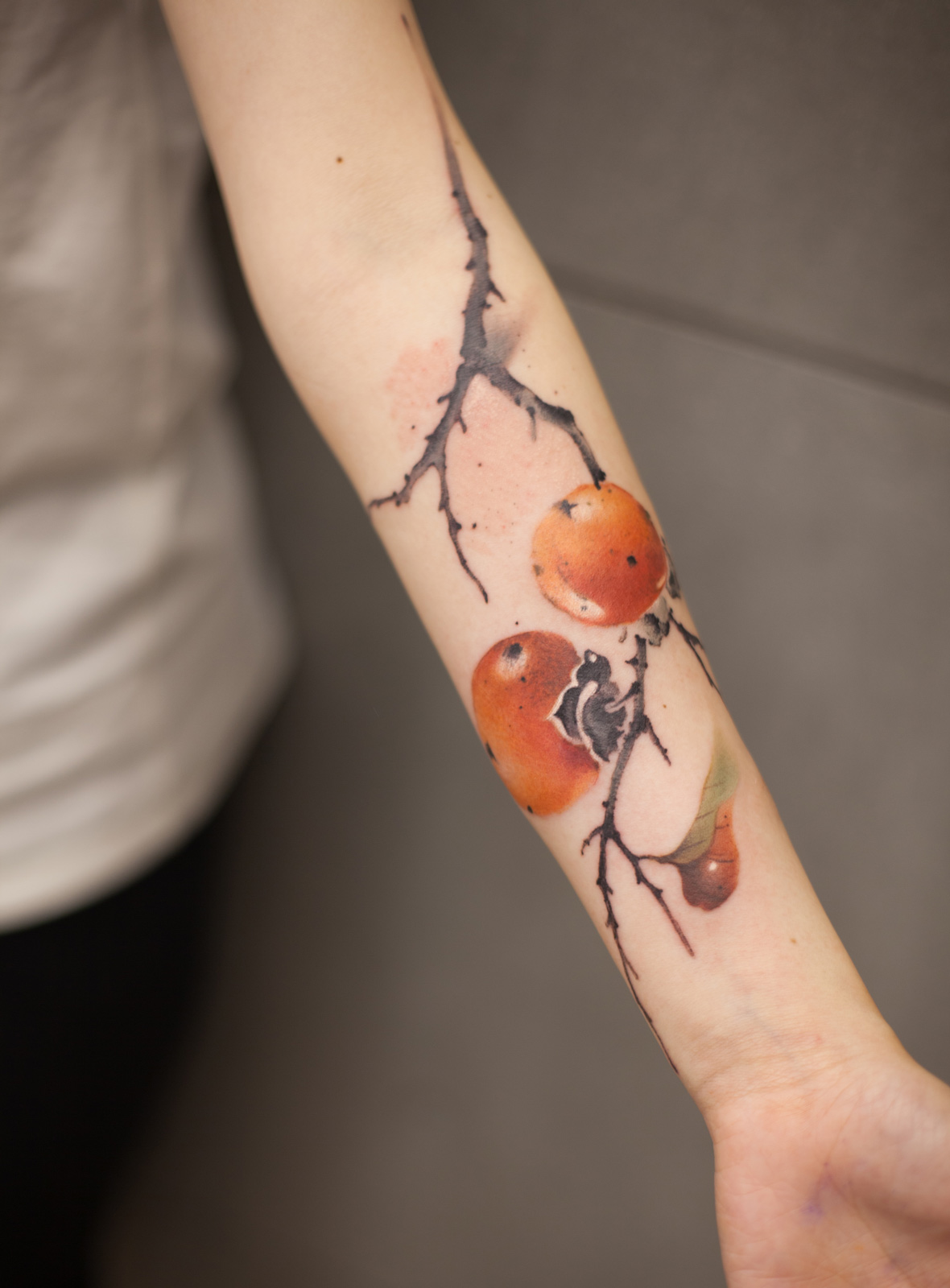 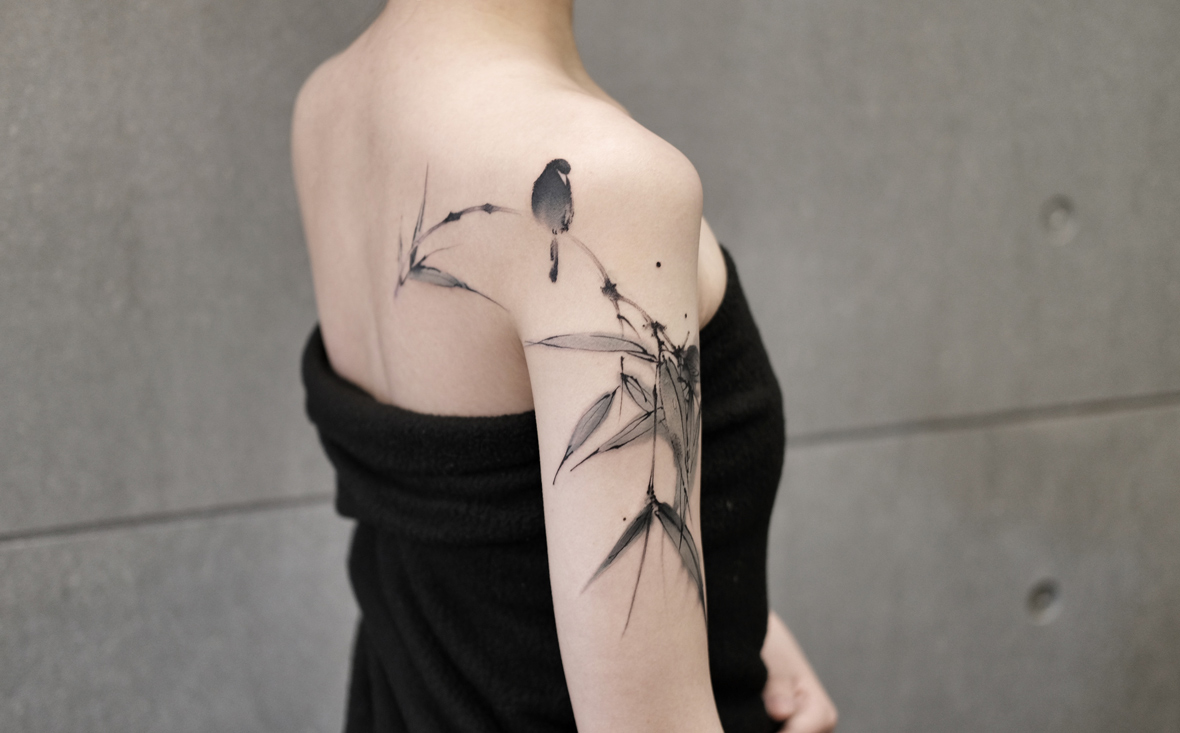 Today, Chen runs her very own tattoo studio in Sanlitun under the name Newtattoo Studio. It’s home to 11 residing tattoo artists, most of whom have all apprenticed under Chen. Droves of customers drop in every week, with a diverse demographic that includes stay-at-home moms, white-collar professionals, and expats with an interest in Chinese art. “I hope my tattoos can be the opening of a window,” Chen says. “The past is the foundation, but I’m building atop of it with my contemporary take. I hope it can help people see just how rich Chinese culture really is.” 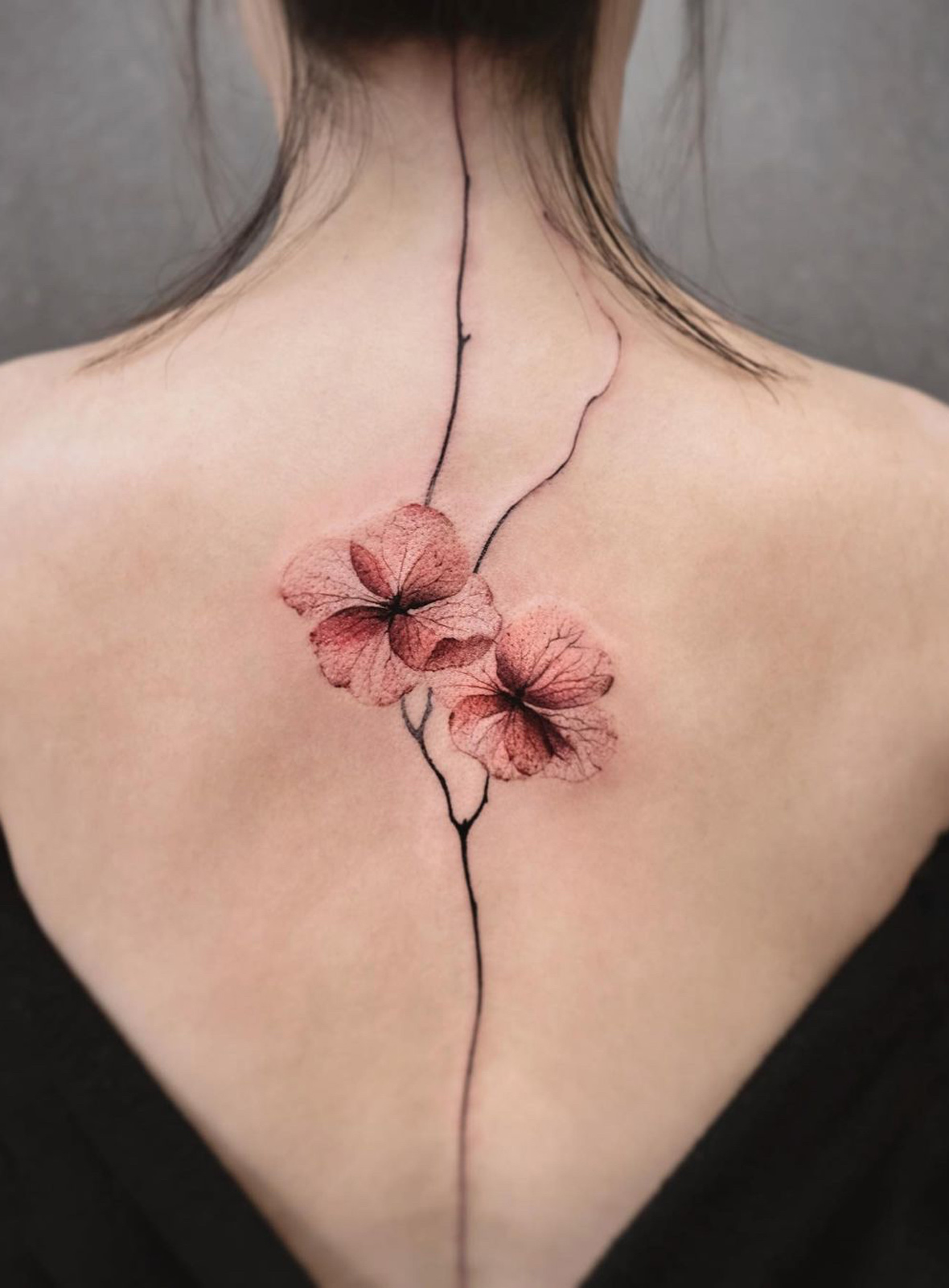 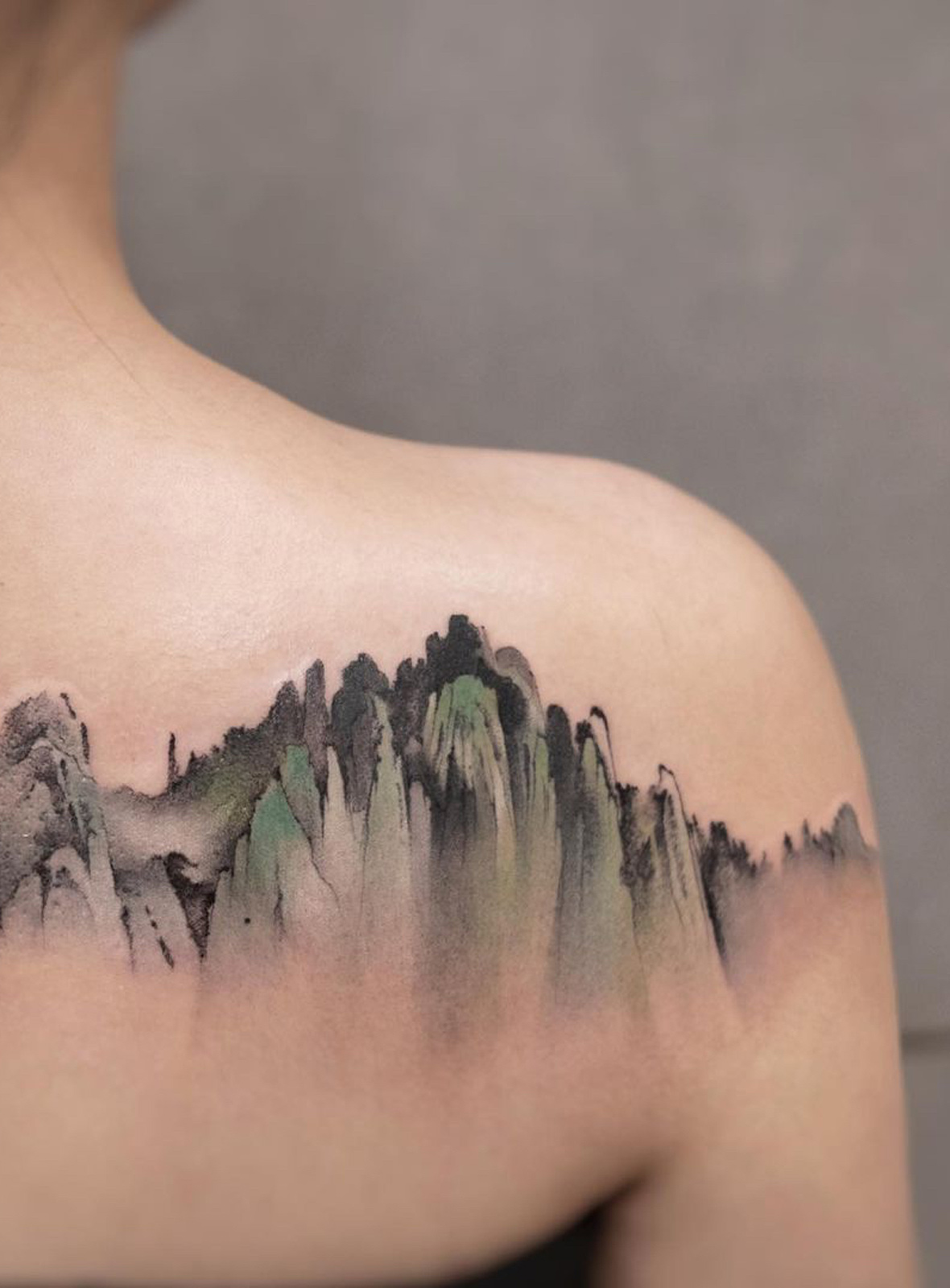 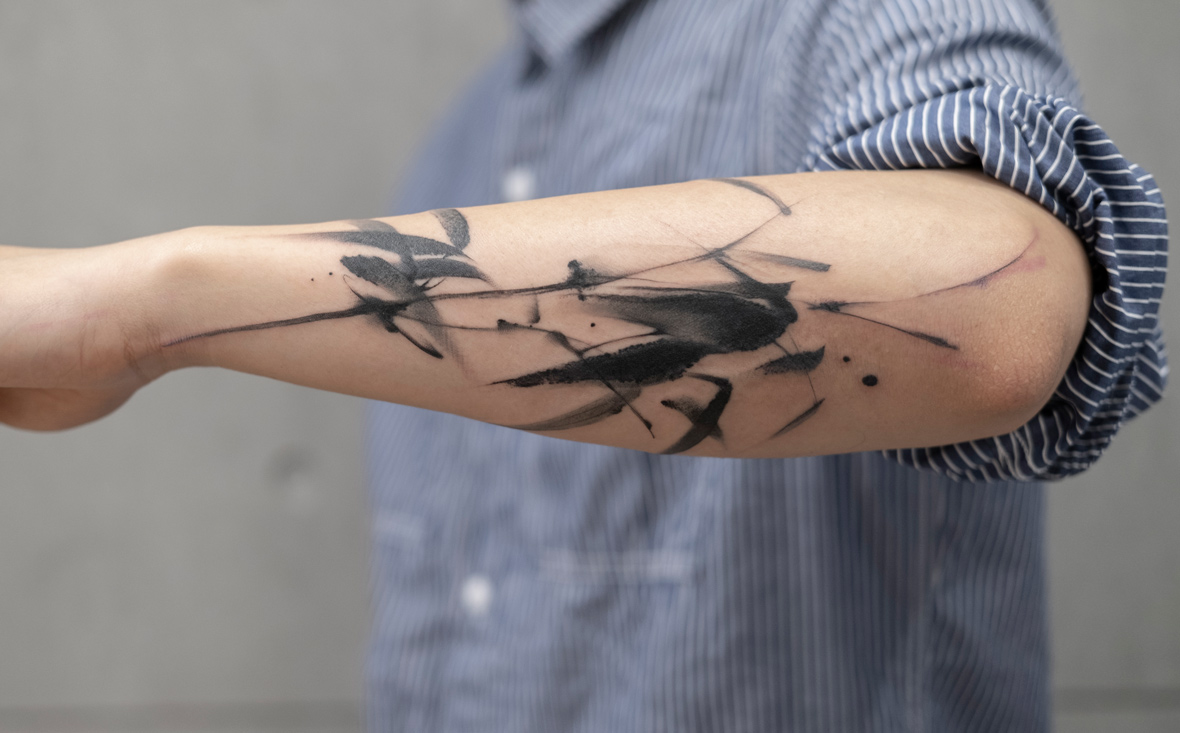 It’s been a long journey from her humble beginnings as a customer at Leng Yan Tattoo to being one China’s most sought-after tattoo artists today. This past decade, she’s bore witness to tattoos gaining an increasing level of acceptance with younger generations. Naysayers still remain of course, as evidenced by the banning of tattoos on broadcast television, but her persistence is unwavering. “Stigmas aren’t always a bad thing,” she shrugs. “They can remind us of what we should or shouldn’t do.”

As for what the future holds for tattoo art in China, Chen only hopes that her work can change people’s minds about the art’s stained reputation. “I want every client to feel respected and show more people, especially ink enthusiasts, that Chinese culture can very much be incorporated into tattoo art,” she says. “A Chinese tattoo renaissance is possible.”