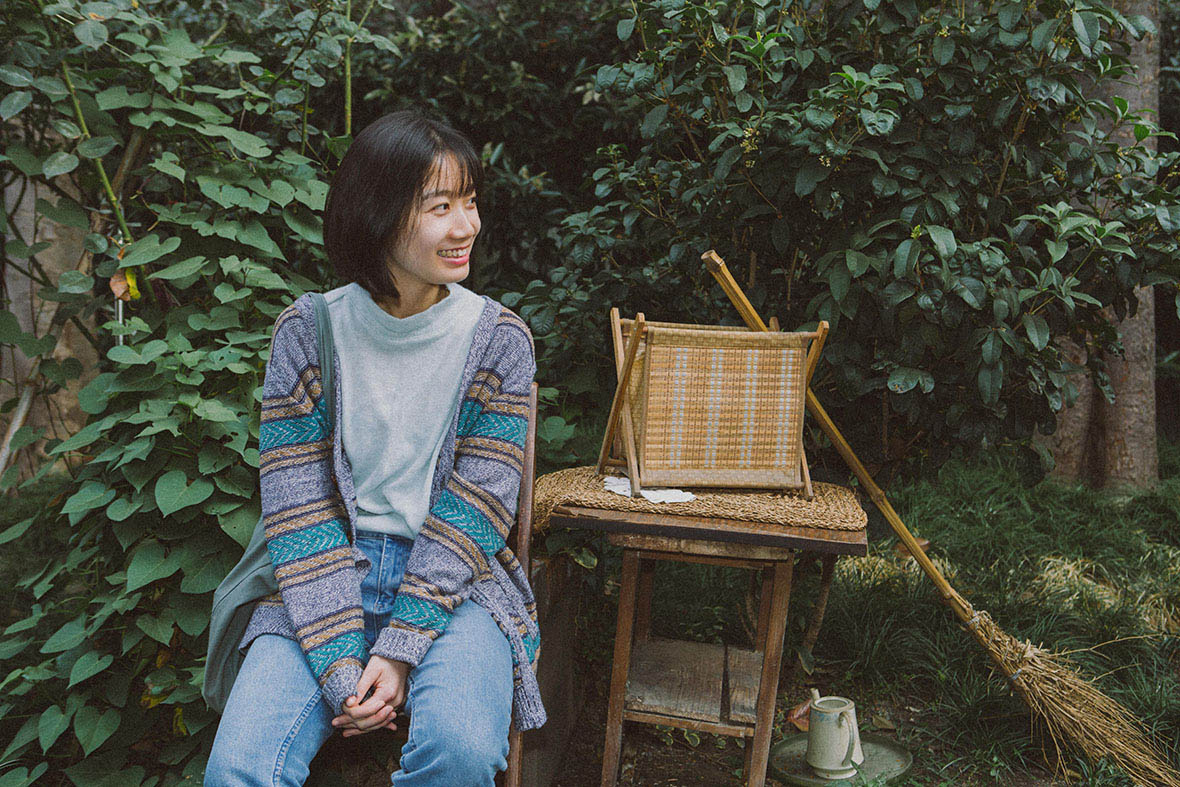 For my interview with Wang Zhanhei, one of China’s youngest writers, I arranged to meet her in Dinghaiqiao, a neighborhood on the outskirts of town.

From the subway, I had to pick my way through an open-air market, where stalls with an assortment of vegetables, baskets of fruits, and buckets of freshly caught carp—some still flopping about—lined the road. Two blocks later, I turned down an alleyway barely wide enough for a person, walked a few hundred more meters, and finally arrived at the place where we’d agreed to meet: Dinghaiqiao Mutual Aid Society, a volunteer-run organization that offers assistance to migrants and manual laborers. It’s a place that Wang often visits.

When I arrived, she was already inside, engaged in a lively conversation with some of her friends. 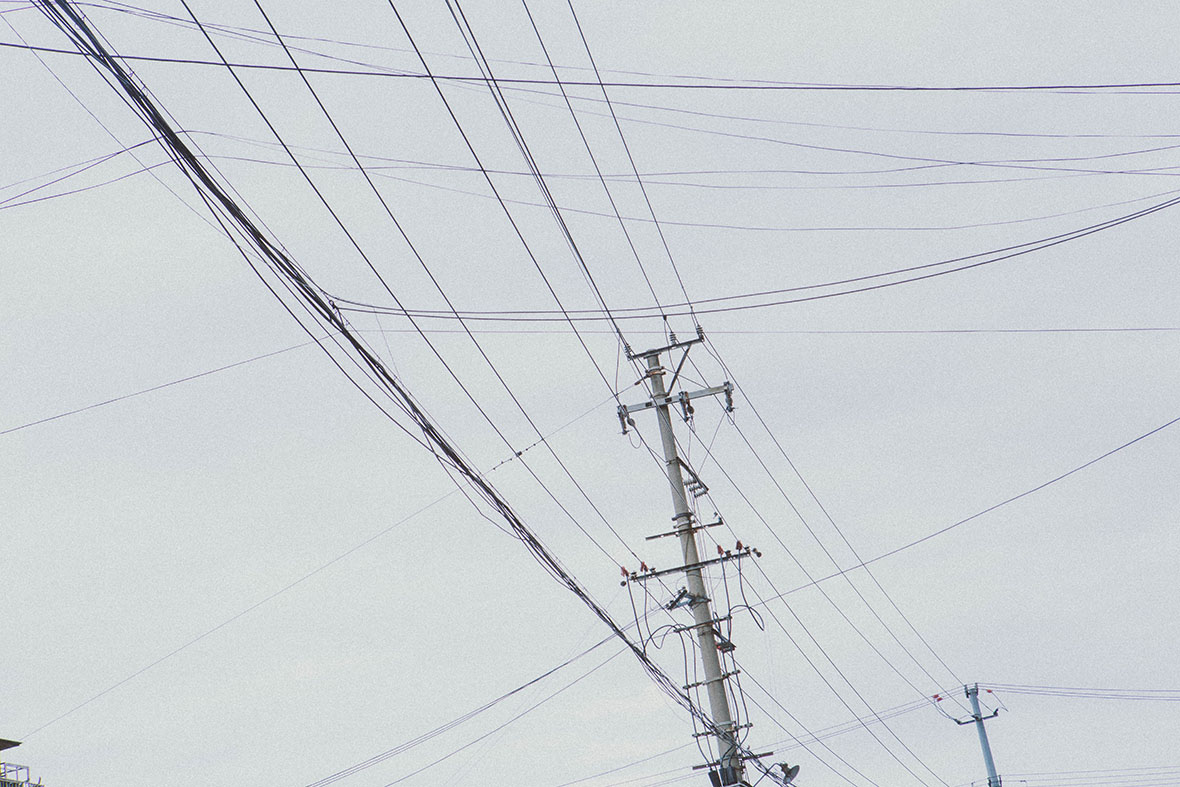 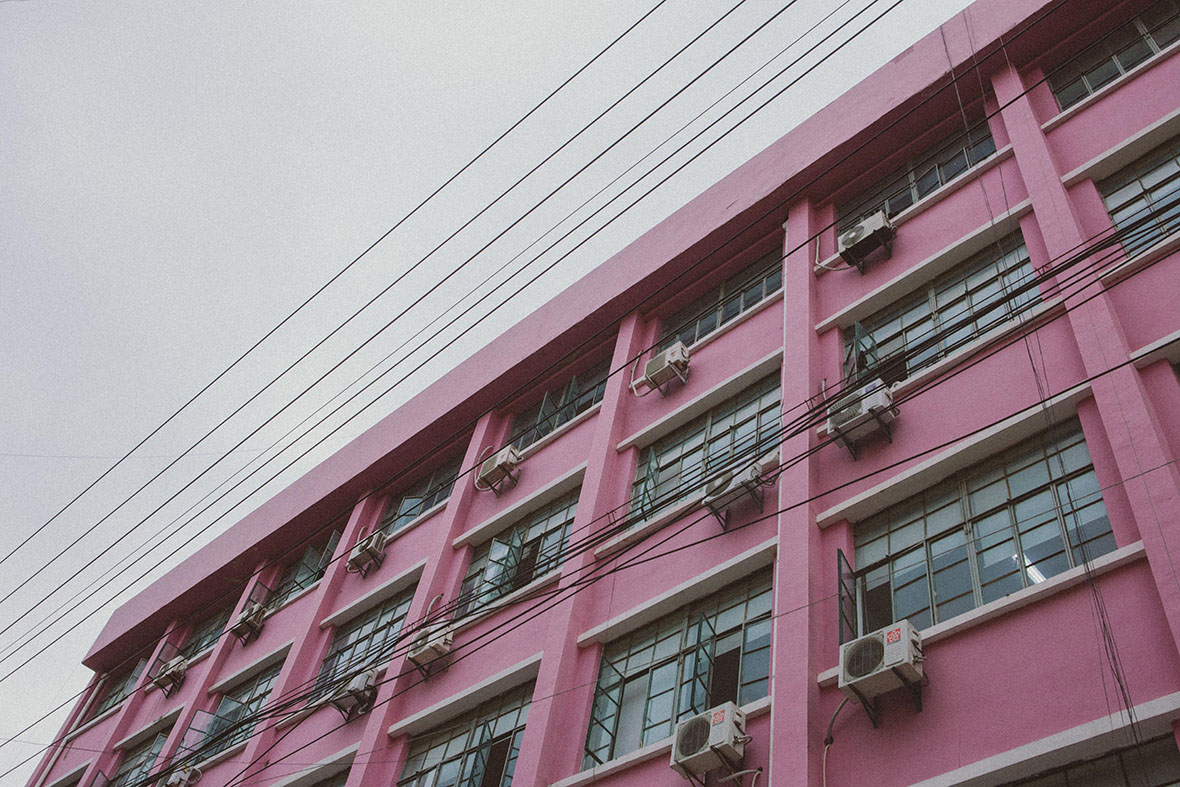 Born in 1991 in Jiaxing, Zhejiang Province, Wang Zhanhei graduated from Fudan University with a degree in literature. Her stories Neighborhood Heroes, which originally appeared on Douban, have been published in ONE, Furong, Shanhua, and the Sinan Literary Journal.

Succinct and straightforward, this statement of fact is the book’s only introduction to the author.

As it happens, since she graduated from Fudan University, Wang has been working as a high school instructor, teaching seniors in an international program. She only sees herself as a writer when she’s actually writing—the rest of the time she calls herself a working stiff. When we arranged to meet, she texted me that she happened to have the day off, but she followed this information with a frowning emoji: “Next week I have to work six days straight.” 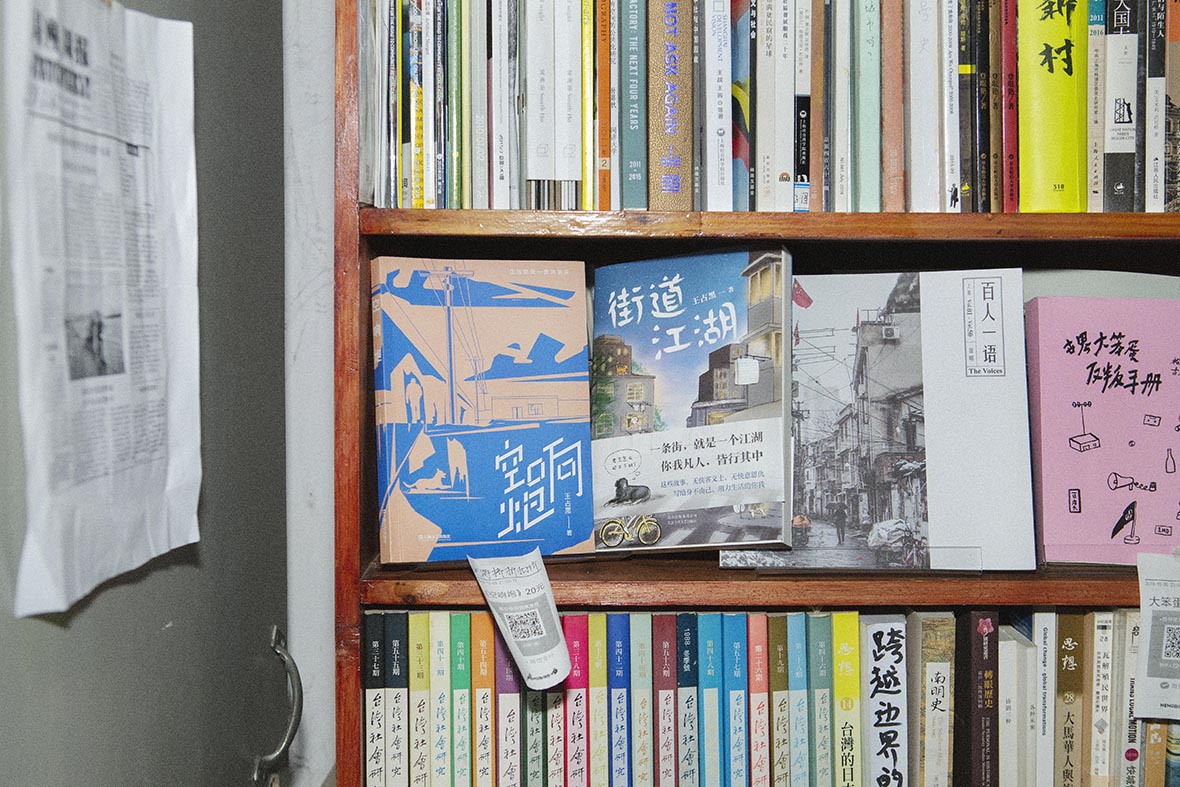 The interview officially began as we strolled among the clusters of low-rise apartment buildings in the neighborhood and chatted.

The neighborhood consists of typical working-class housing, and was reminiscent of the place Wang herself grew up in. Familiar sights and sounds filled the streets: neighbors cheerily greeting one another, older folks and young kids dawdling along the streets, and identical square laundry racks sticking out from every window.

“I still live in an old building like this,” she said. She spoke calmly, though her eyes constantly looked this way and that, fascinated by everything around her. She’d point out cats busily cleaning themselves, tame rabbits hopping about, overgrown loofah vines climbing the walls, and balconies decorated with potted plants. 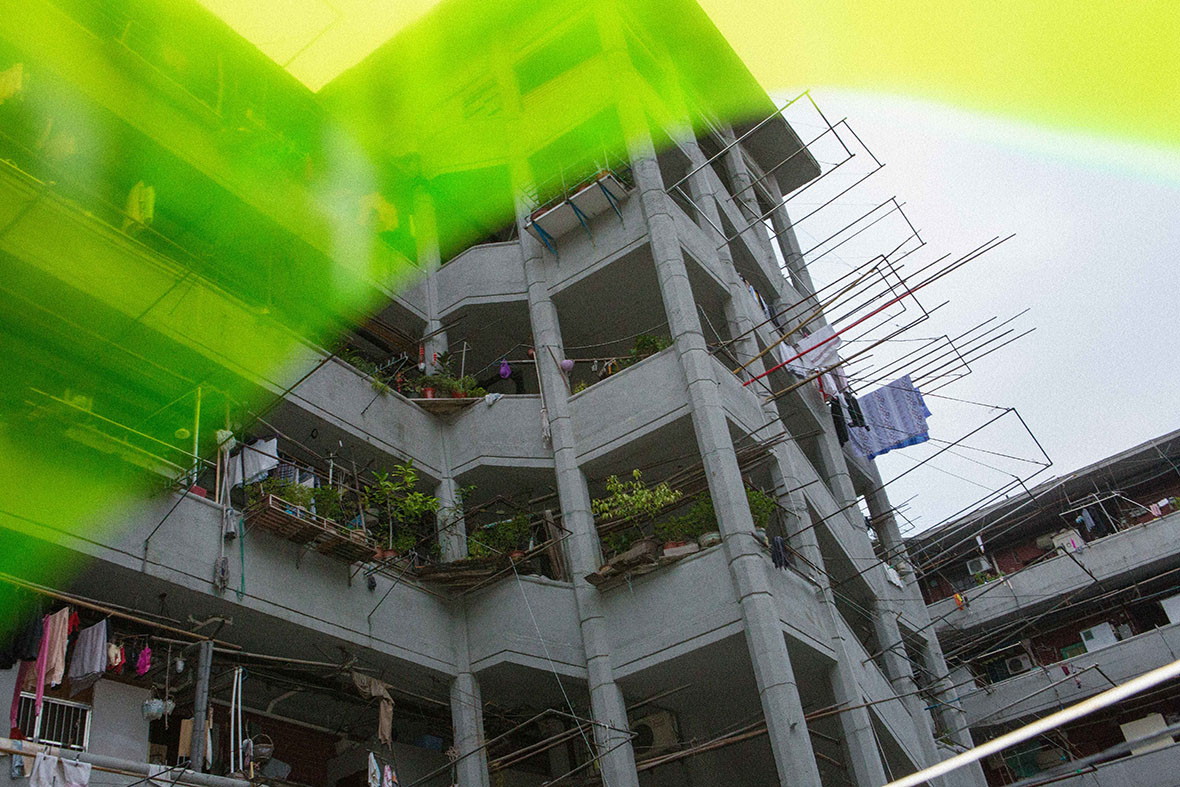 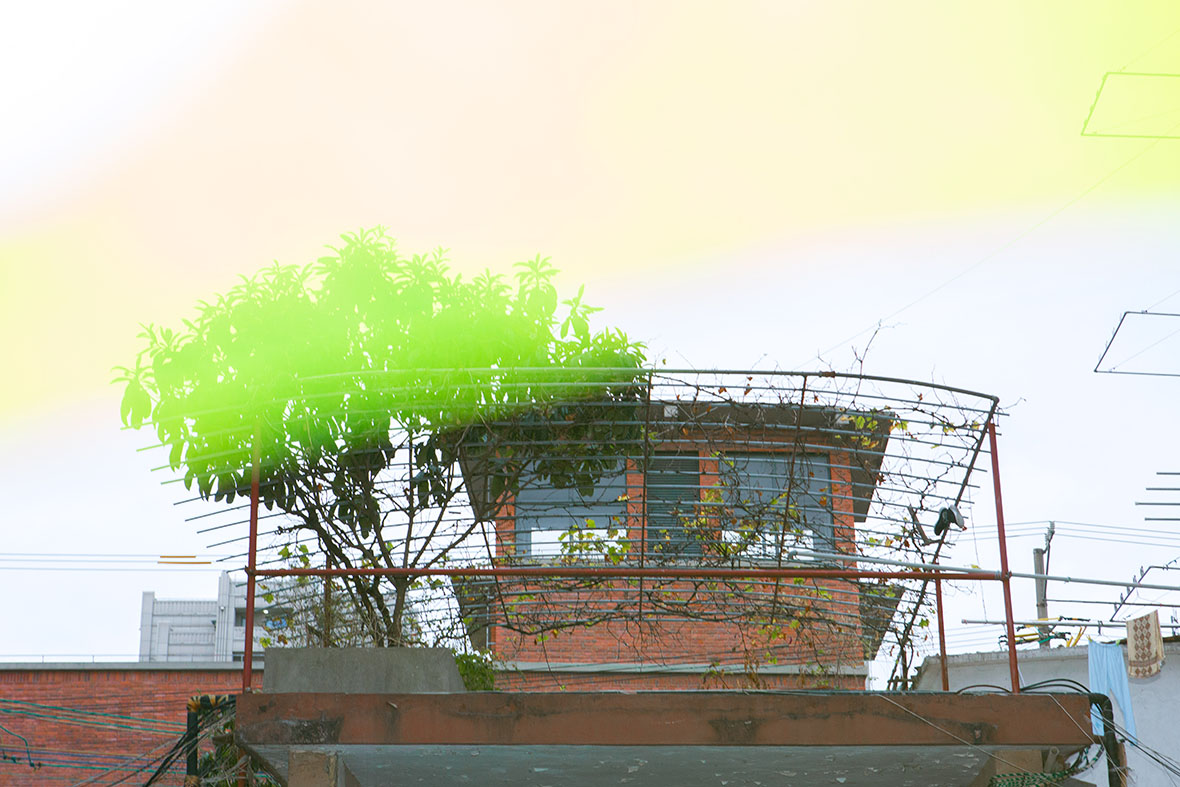 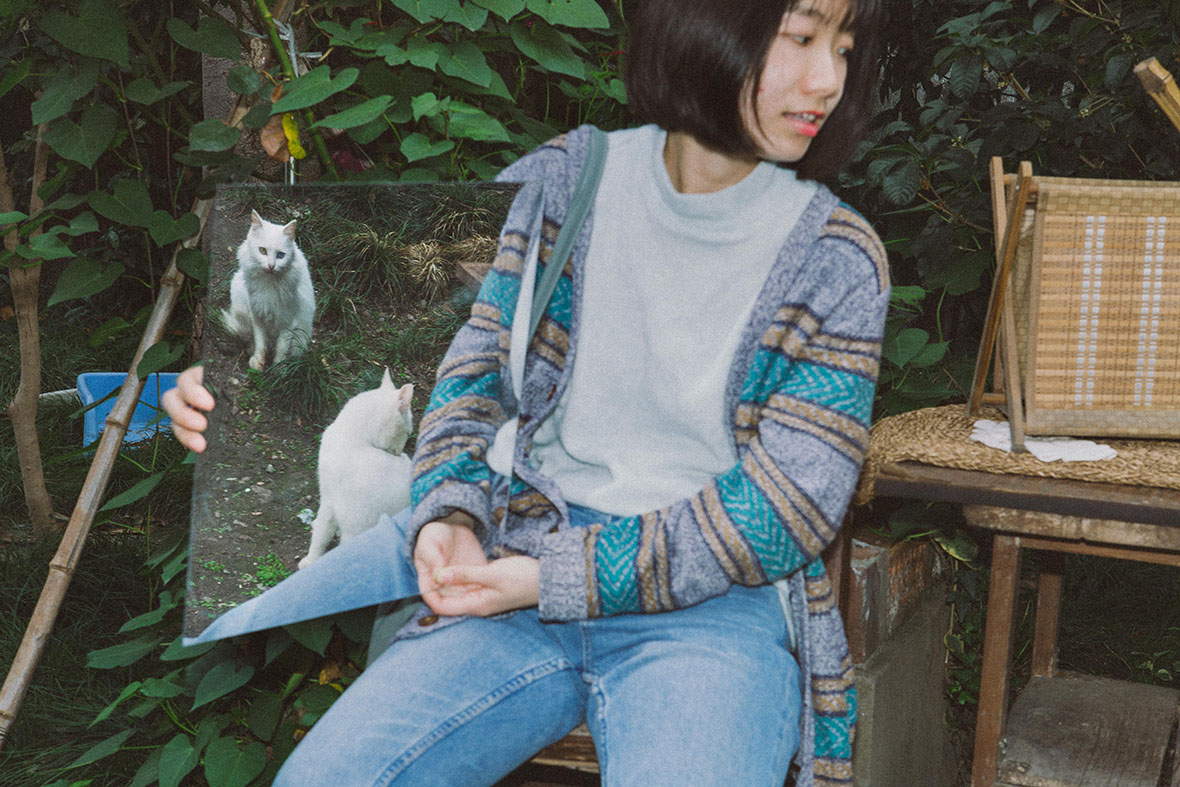 In her Neighborhood Heroes series, the “neighborhoods” are the apartment blocks and residential complexes built as worker housing in the late 20th century—a common sight in Chinese cities—while the “heroes” are the ordinary residents: security guards, fruit vendors, trash collectors. These humble characters take center stage as the stars of her stories.

Wang has a knack for striking up conversations with strangers. As we walked and took pictures, curious neighbors would approach us, and she readily made small talk.

“That old? How long have you lived here?”

The conversation was animated, with the old man speaking in Shanghainese and Wang answering in her Jiaxing dialect. As the sky darkened above us, her eyes seemed to gleam even more brightly. 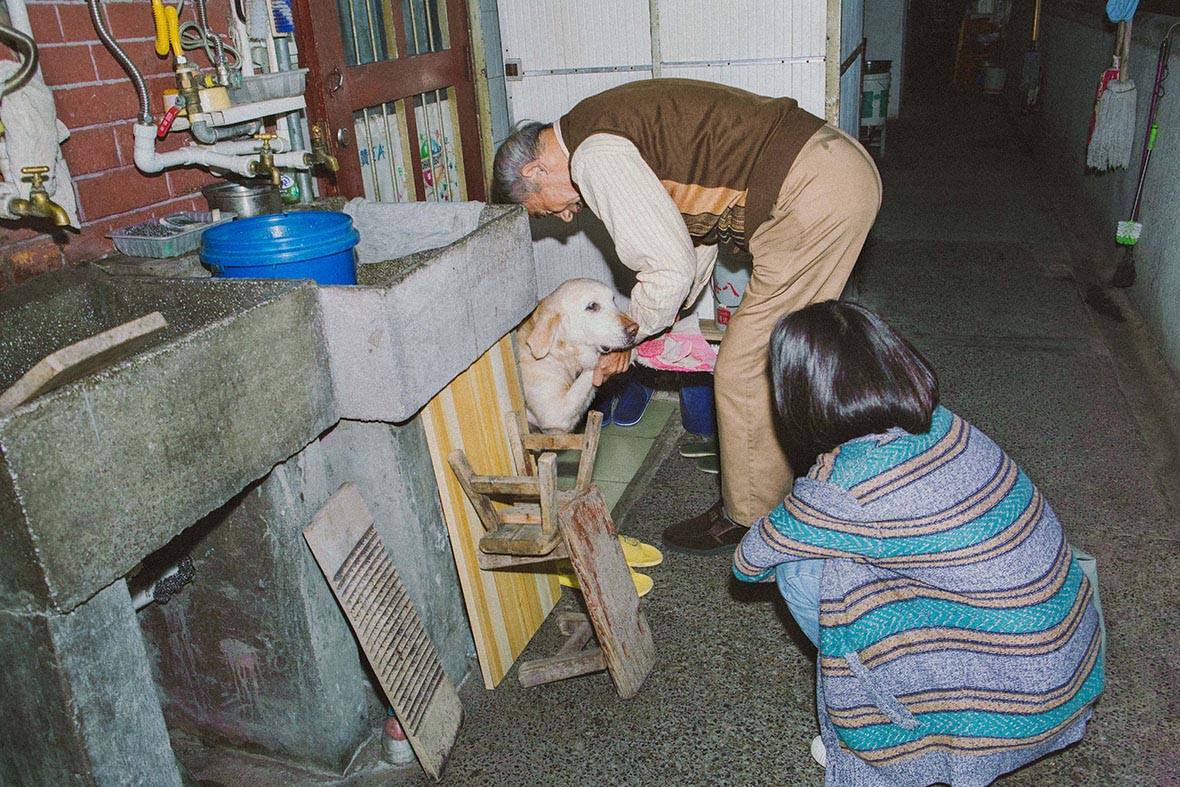 Wang gives her characters intriguing names: Xiao Guan (Little Official), Lao Jin (Old Gold), Chun Guang (Spring Light), and so on. Many of these are cobbled together from names she heard called out in waiting rooms in banks or hospitals, or which she happened across in short news items. With some rearranging and a lot of revision, she created a series of old “neighborhood heroes.”

“In the beginning, both books were called ‘Neighborhood Heroes,’ but the titles were overhauled in the editorial process,” she recalls. “I suppose everyone’s definition of a hero is different. For some people, heroes are mighty individuals, such as a military general. But my interpretation is different.” 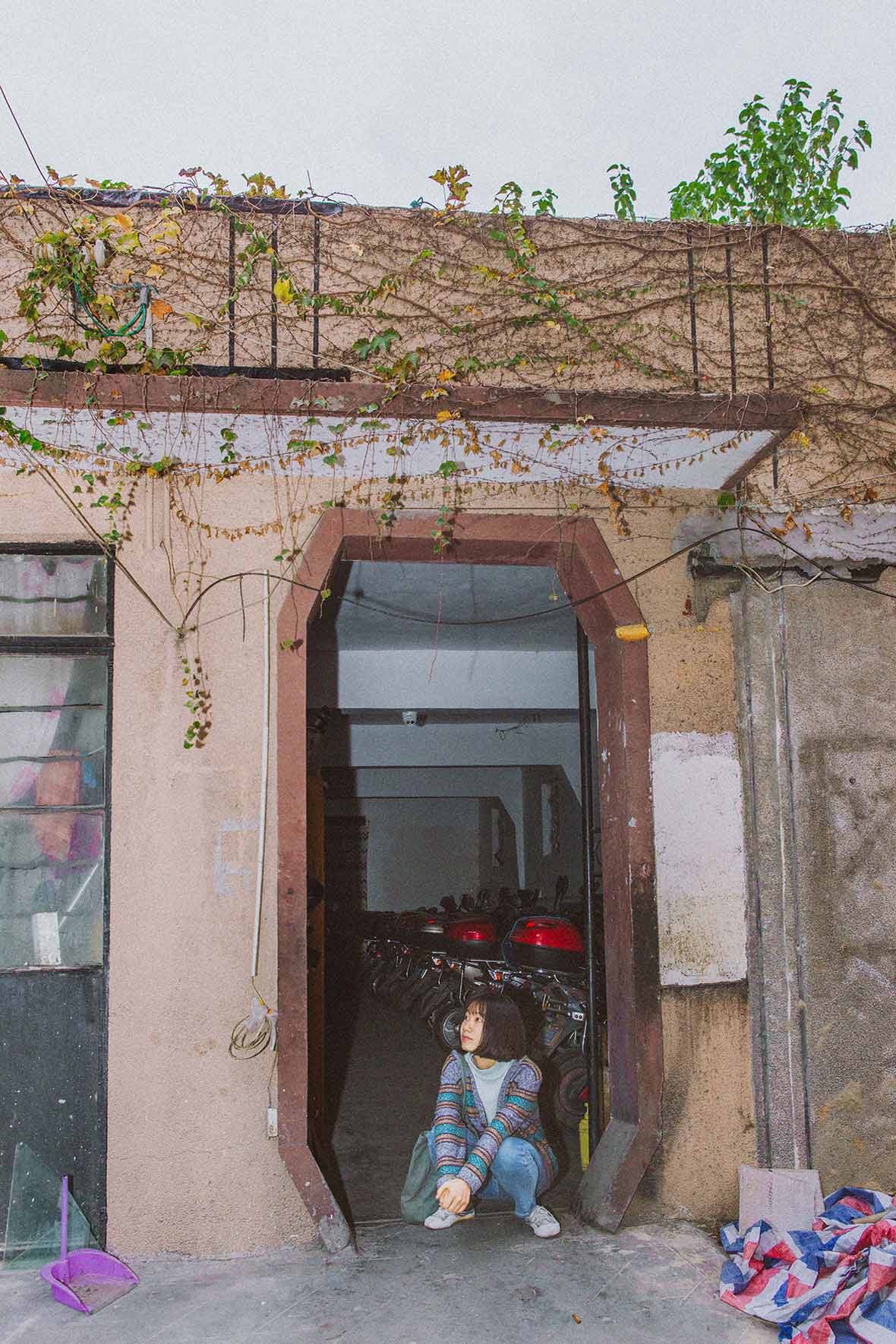 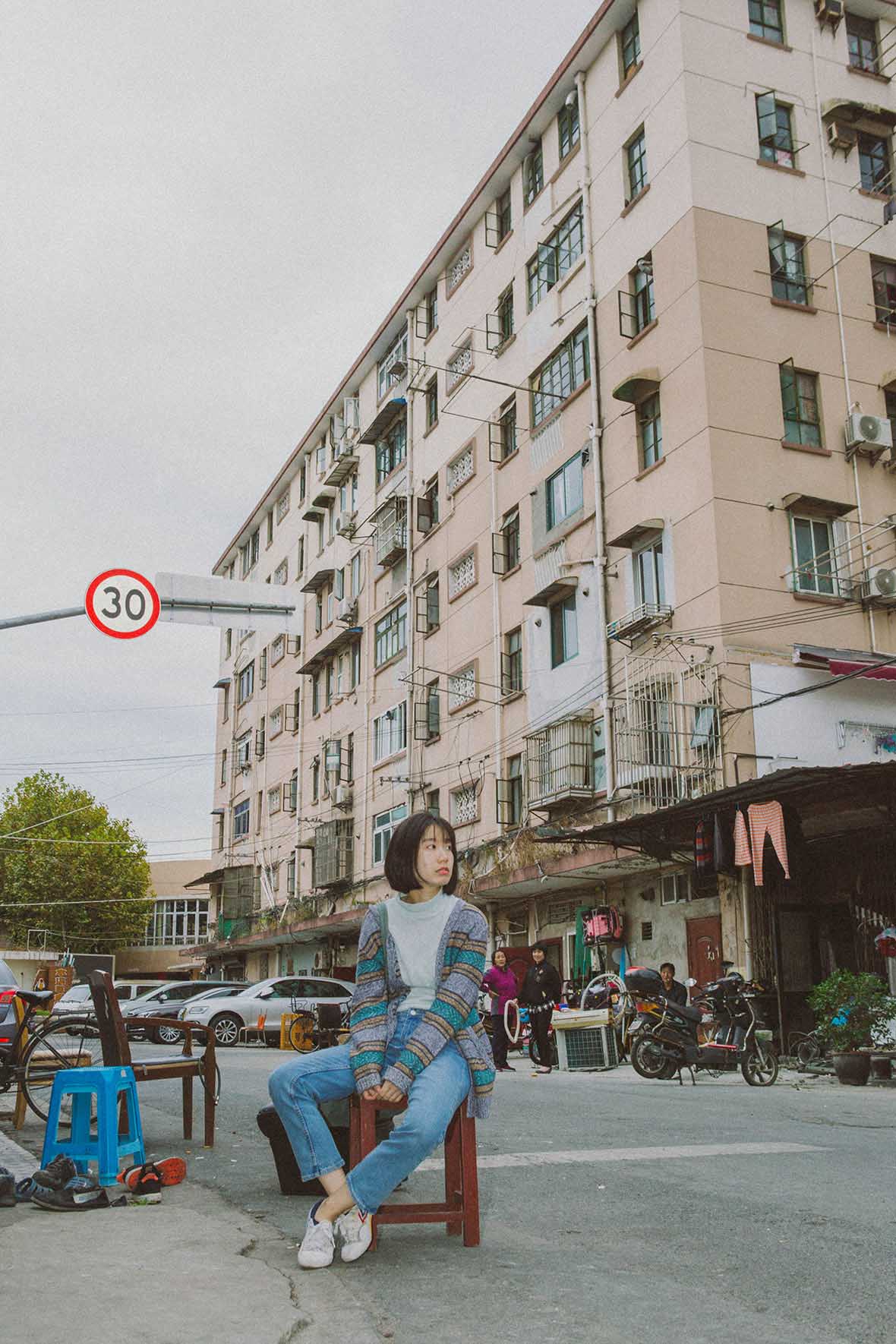 Wang began writing the first piece in her series just after high school, inspired by Xiao Guan, a security guard who looked like he’d been around the block a few times and would make a good story. But once she got to university, she stopped, and when she eventually looked back, the stories and their characters had aged: she discovered that heroes can grow old. They’re just ordinary people.

Not long ago, speaking on Yixi—a platform akin to TED talks—Wang said: “There are a lot of lovable people in that world, and a lot who are lovable and despicable at the same time. But I like to see them as larger than life. Others might say they’re just the common folk, but I like to see them as heroes. Others might say they’re a lost cause, but I want to sing their glories.”

When she published the collection in two books, she changed the title from “Neighborhood Heroes,” but her name for the people hasn’t changed. She still calls them heroes. 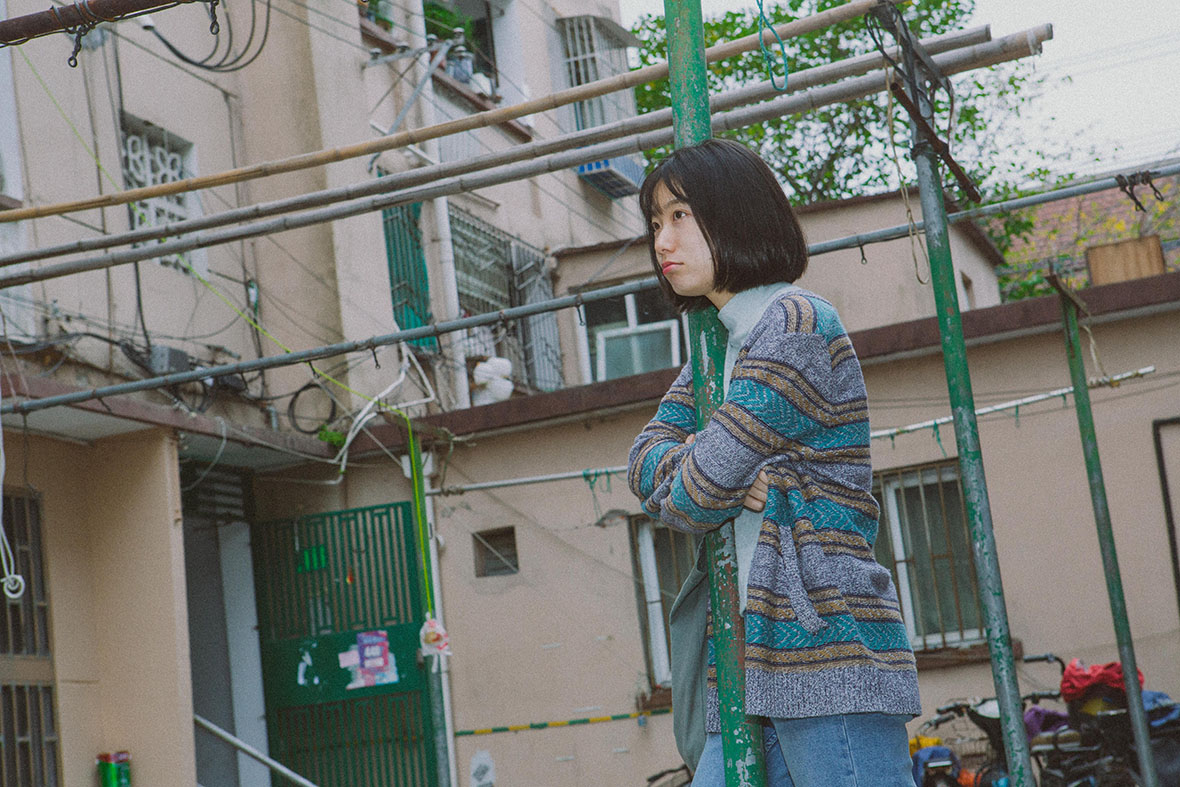 2 / A Little Kid in Momentous Era

Ah Ming is one of Wang Zhanhei’s many neighborhood heroes.

One day around noon, when the trash collectors got to the last building, they picked an old woman out of the trash. She’d fallen head-first into the bin and was now fast asleep. When they pulled her out, her whole body gave off a sour stench, and her hair was soaked in a soupy liquid. Wrapped around her breast was a misshapen rubber apron. They turned her over to look and saw—good lord, it’s little old Ah Ming! The one who lives in the garage at the western end of the neighborhood.

In fact, stories like this aren’t so unusual in the Yangtze region, not even in Shanghai. After a layoff or some other misfortune, some people turn to scavenging to get by. A lot of what they take can’t be sold, and they end up hoarding piles of trash. Their stories make the news all too often. But these people, who often face looks of contempt from strangers on the street, are too quickly forgotten about.

But Wang writes about them.

In the story, Ah Ming is fished out of the trash bin and sent to the hospital, but before long she goes back to her trash-picking life. Wang doesn’t give her a tragic ending, yet the story gives you pause. 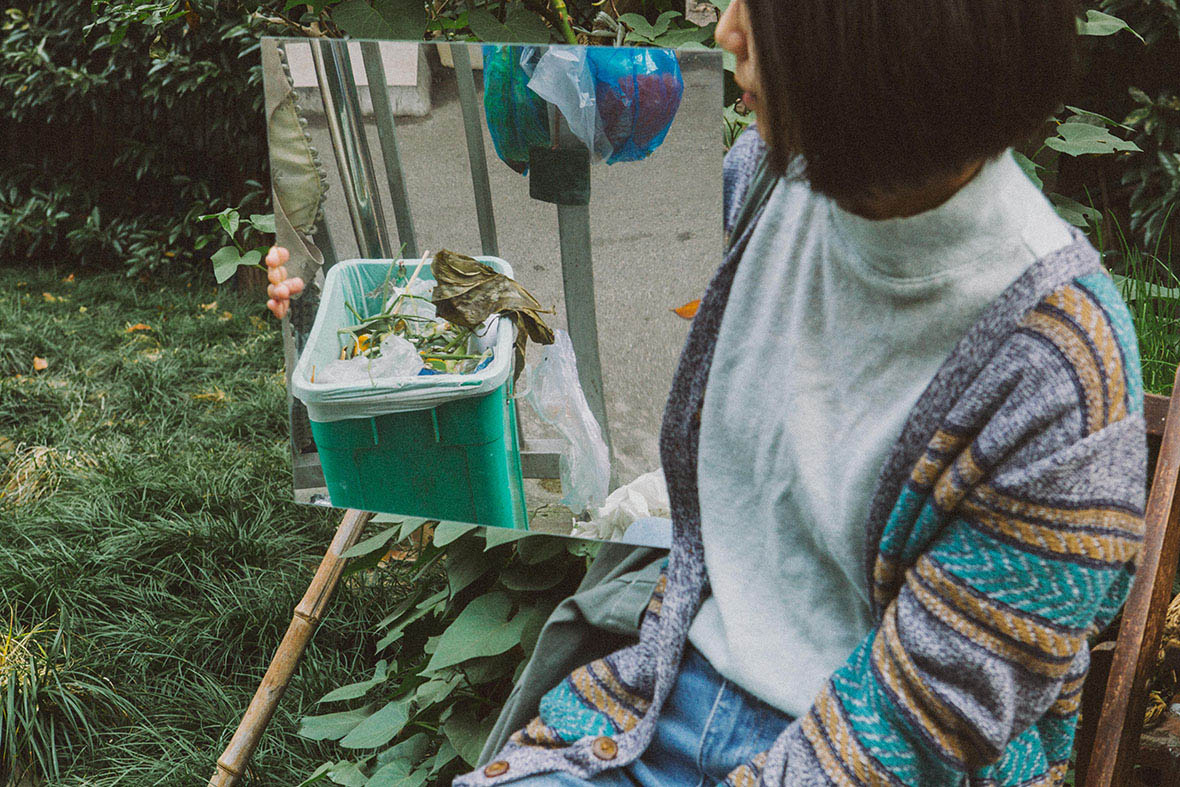 There’s also Chun Guang, who works as a carpenter, Zhao Guangming, who delivers milk, Mei Fen, a middle-aged woman who waits anxiously for her daughter to find a husband. Wang writes about their everyday household struggles.

Over time, her cast of characters grew and grew, and eventually became a series. Wang also came to understand her own style. “After figuring out what my quirks were, I got a clearer sense of what I wanted to write, what I could write, and what I could try to write. Some people love to banter and are always shooting the breeze. Some people are always thinking about the past, and are a bit solemn. I want to include a lot of different kinds of people, and use different styles.”

Wang doesn’t purposefully romanticize her characters, nor does she intend for readers to leave with some profound takeaway. She describes these older residents in old neighborhoods in a four-word phrase:

Laid-off factory workers have an expression: nan bao nü chao—“secure men, super women.” It means the men work as security guards, the women work in a supermarket. For every ten families where factory workers were laid off, seven or eight are like that. Mei Fen and her husband were no exception.

Secure men, super women. These are trivial things—nothing thrilling or out of the ordinary. But isn’t there a heroism in these stories? 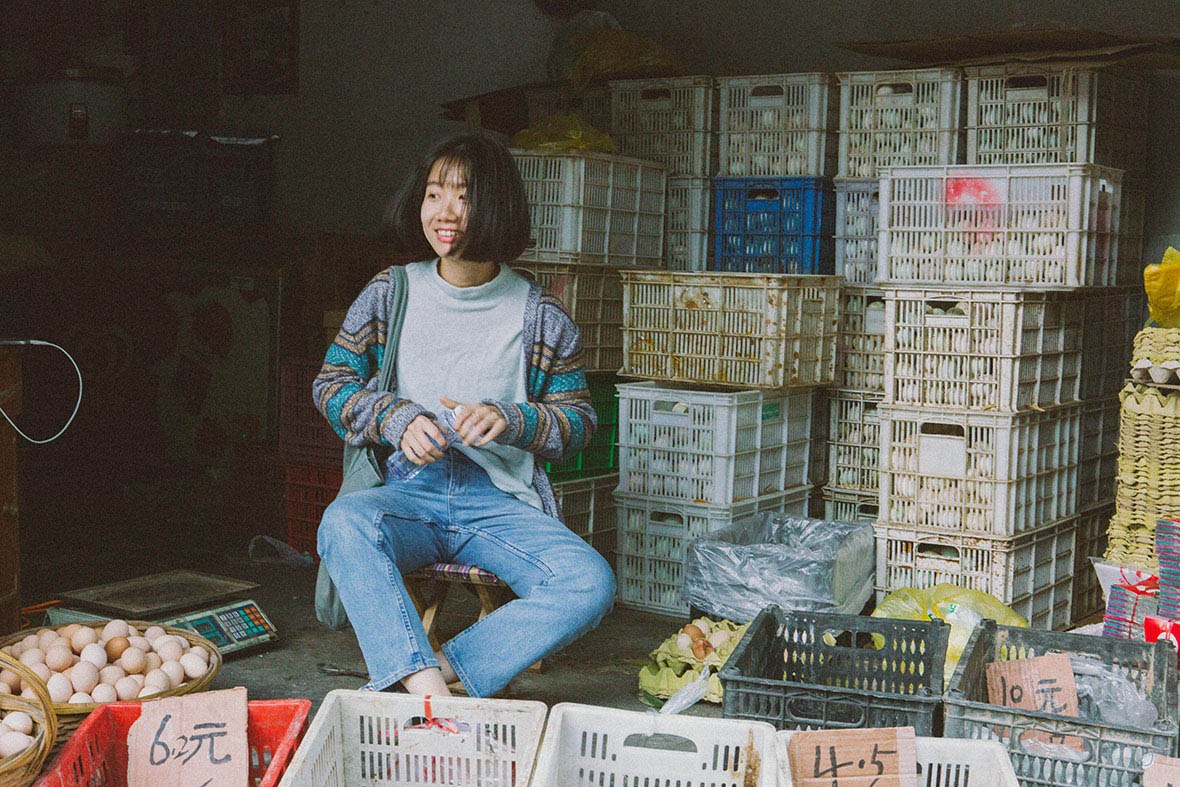 On our way to the market, Wang stepped into a little shop selling eggs.

She doesn’t have to ask how much fresh chicken eggs and salted duck eggs cost per pound. After her father passed away, she had to take charge of the cooking. “My mom can’t cook, so I learned from my dad,” she says. From a young age, Wang followed her father around the neighborhood, and a lot of what she knows, like how to talk to strangers and how to haggle over prices, she learned directly from him.

Wang’s fiction is based on the stories of city dwellers set against the backdrop of fast-moving times. She doesn’t look down on her characters from on high, but sees herself as “a little kid from an old neighborhood.” She looks up to everyone in older generations, and her veneration of these heroes comes partly from her respect for her elders. and partly from her inborn empathy.

Before we get to the market, Wang says she doesn’t want to take photos there. “There are a lot of ways to connect with familiar spaces,” she says. “But this sort of ‘photo shoot,’ I don’t know, it feels wrong.” 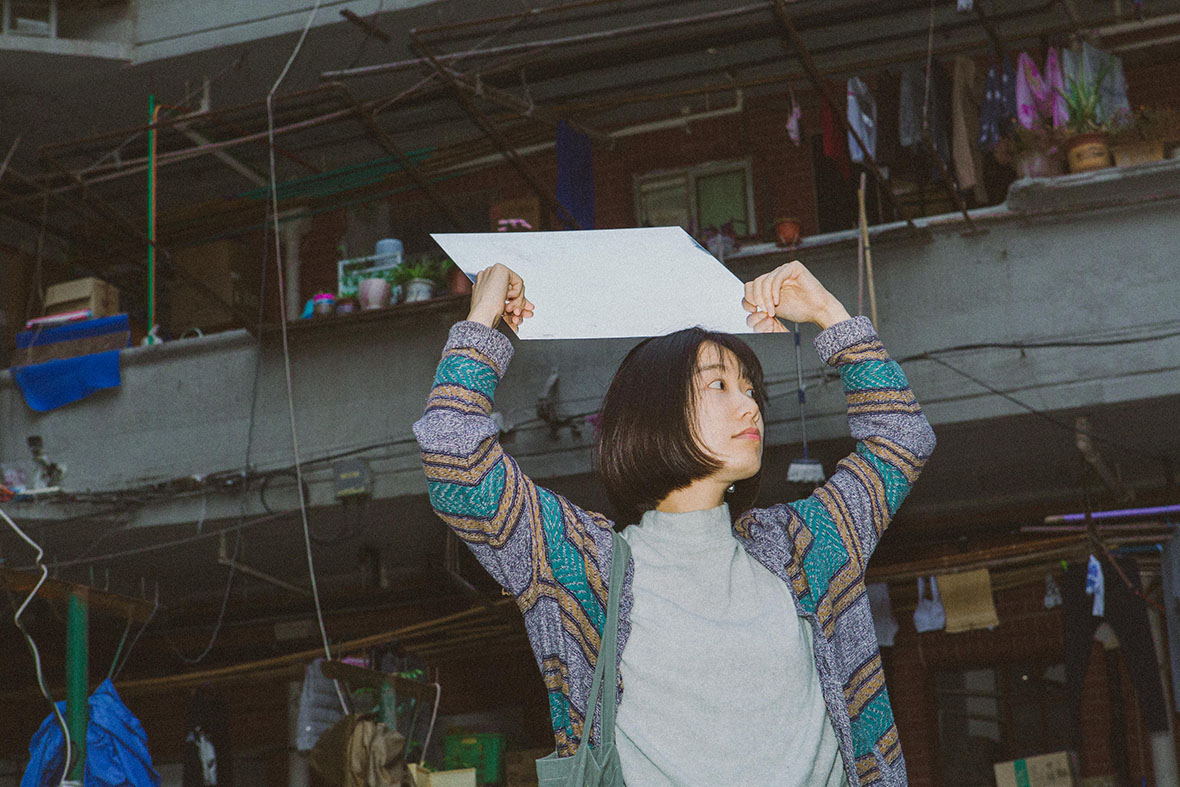 Her new book Jiedao Jianghu is dedicated to “Jia Tao the king.” Jia Tao was her father, who didn’t actually read her stories. “He’d just pick one up, look at the title, and say something like, ‘Oh, you’re writing about Ah Ming! Looks great!'” she reminisces.”My mom’s the one who often reads my books and proudly shows my work to other people.”

Wang is an animal lover. When we ran into a dog that came up to her barking, she just held a finger up to her lips to tell it, “Shh! Stop barking. You’re going to get yelled at.” Her dad also loved animals. The two of them used to talk about what they’d name their dog if they had one, but sadly Wang’s mom wouldn’t let them get one. “I still want a dog, but my boyfriend doesn’t,” she sighs. 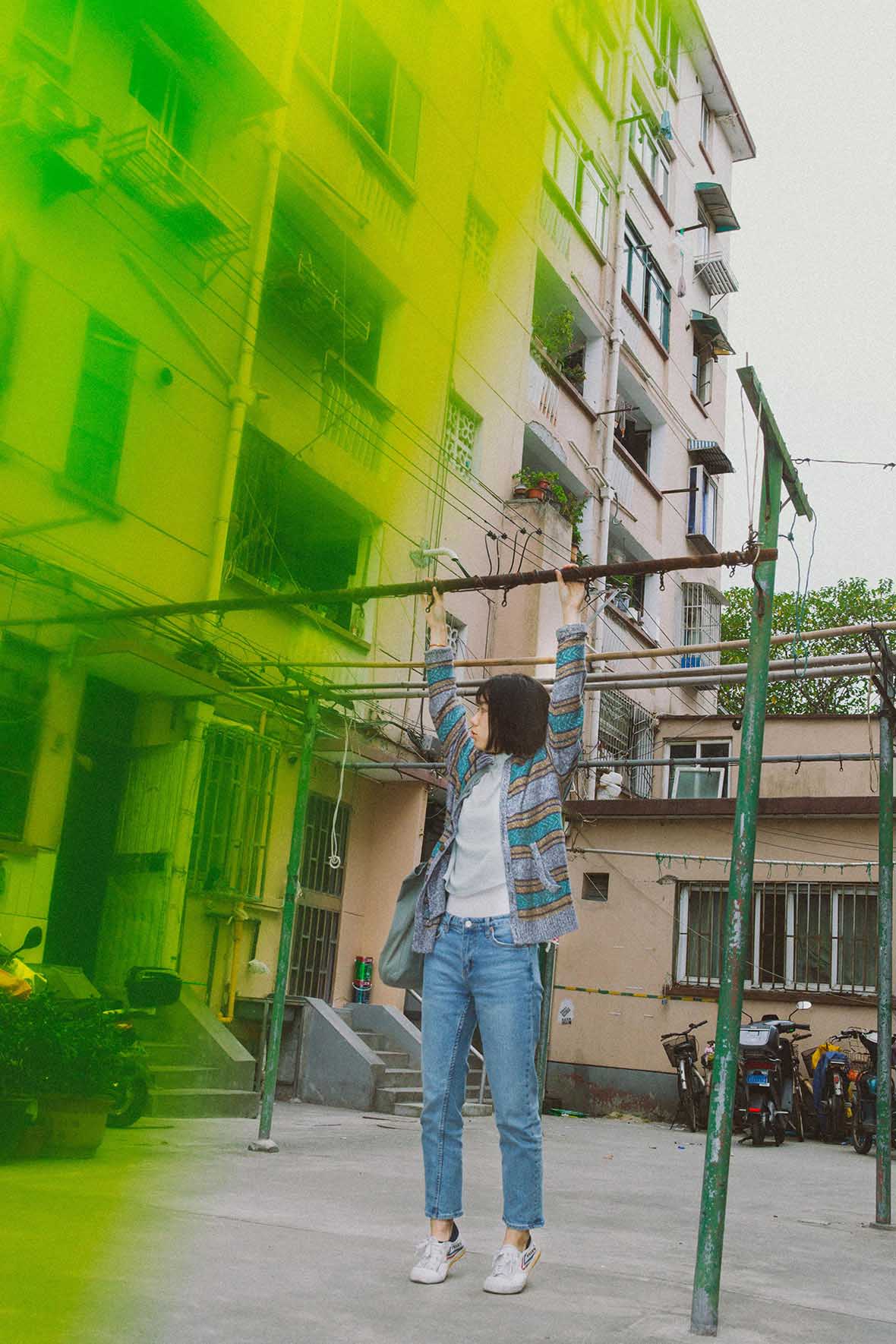 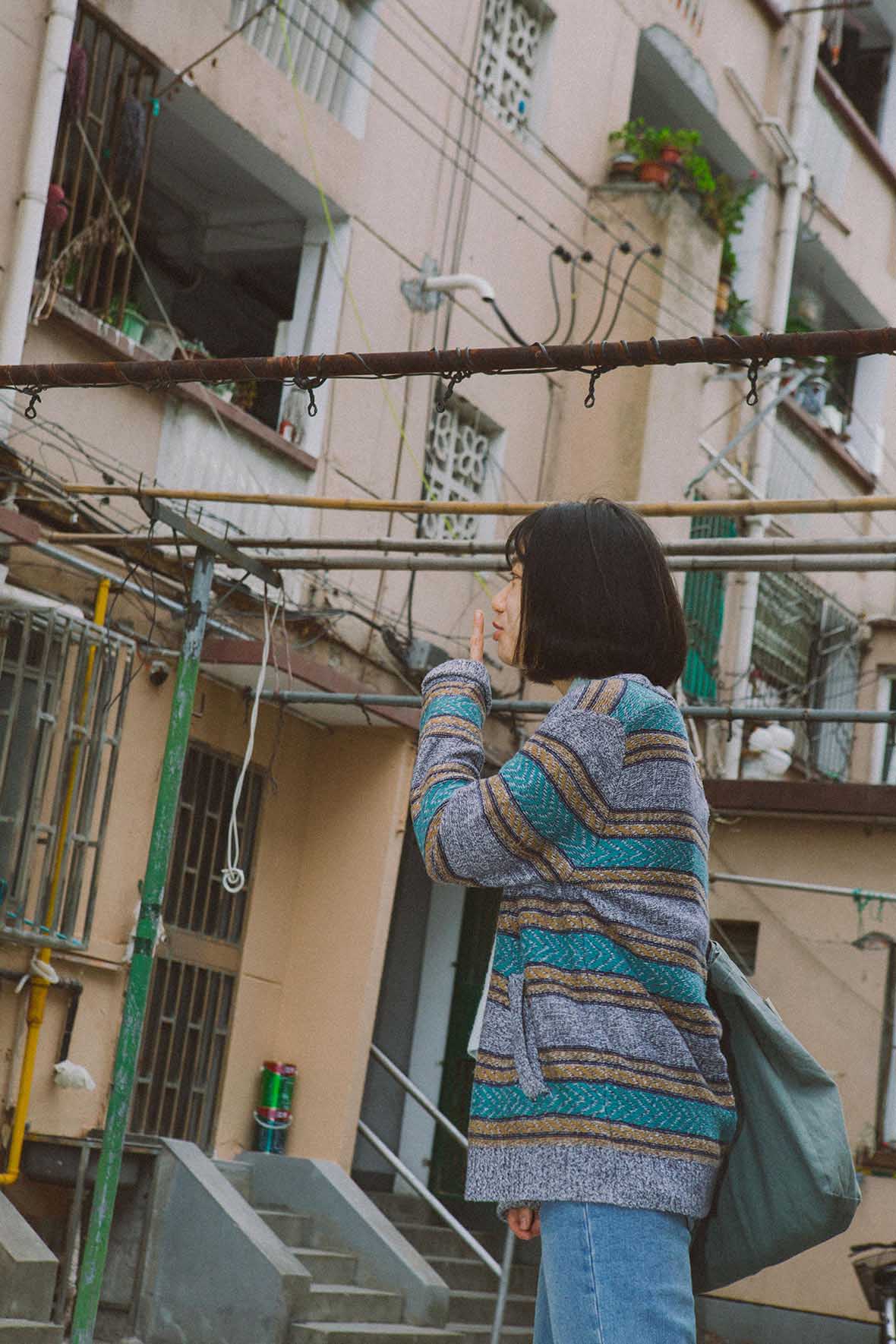 What her father passed on to her is small but substantial. “My dad liked how I’d meet different people and ‘forge my own path.’ He didn’t teach me anything groundbreaking, but he had his own personal life philosophy. Most of all, he gave me a pair of eyes to observe the world around me. In some ways, I’m just a pen in his hand, recording the world we both lived in.” 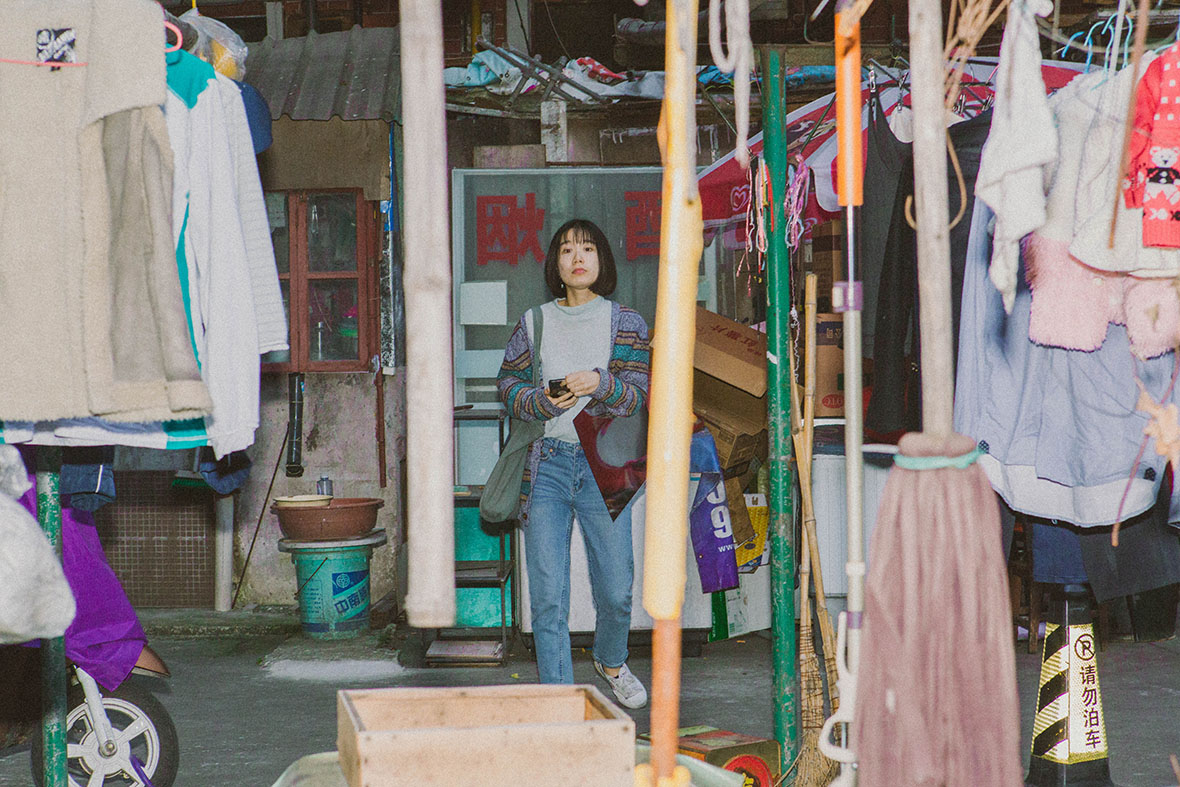 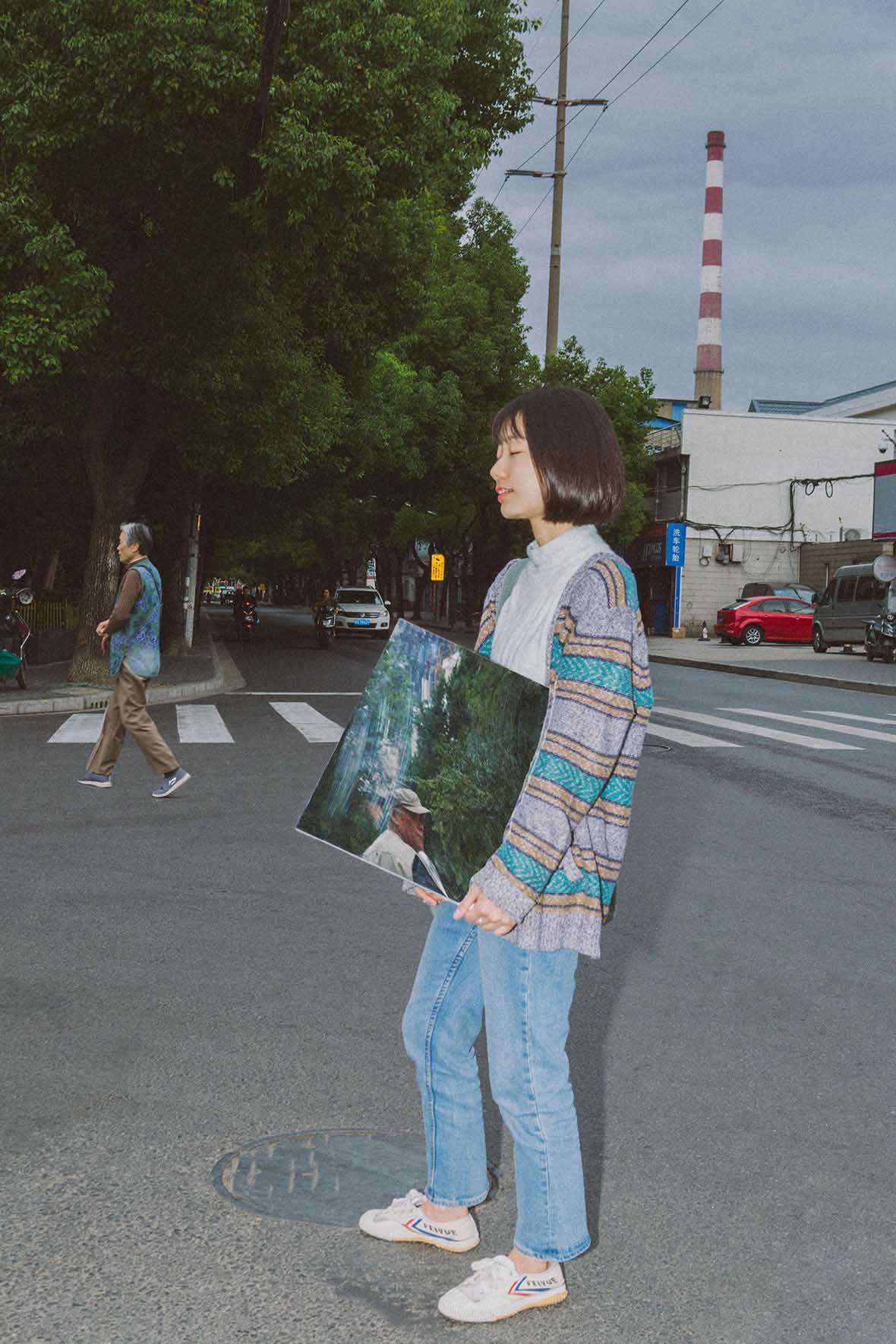 When praising a writer’s work, critics sometimes say that it epitomizes an age, or that it raises a style to new heights. Yet Wang isn’t that sort of writer, nor does she aspire to be. She discovers people who have been washed ashore by the waves of time—wary grains of sand, swept away, stranded, and heaped together to form a beach where Wang Zhanhei, like a curious child, kneels down with her magnifying glass and calls out to her dad to come take a look.

No matter how many neighborhoods there are, or how many stories, for Wang, the real hero is her father.

Not long ago, I clicked on her Douban page in search of a bibliography of her works. Looking at the comments section, I noticed next to her name a few extra words: “Jia Tao the king.” 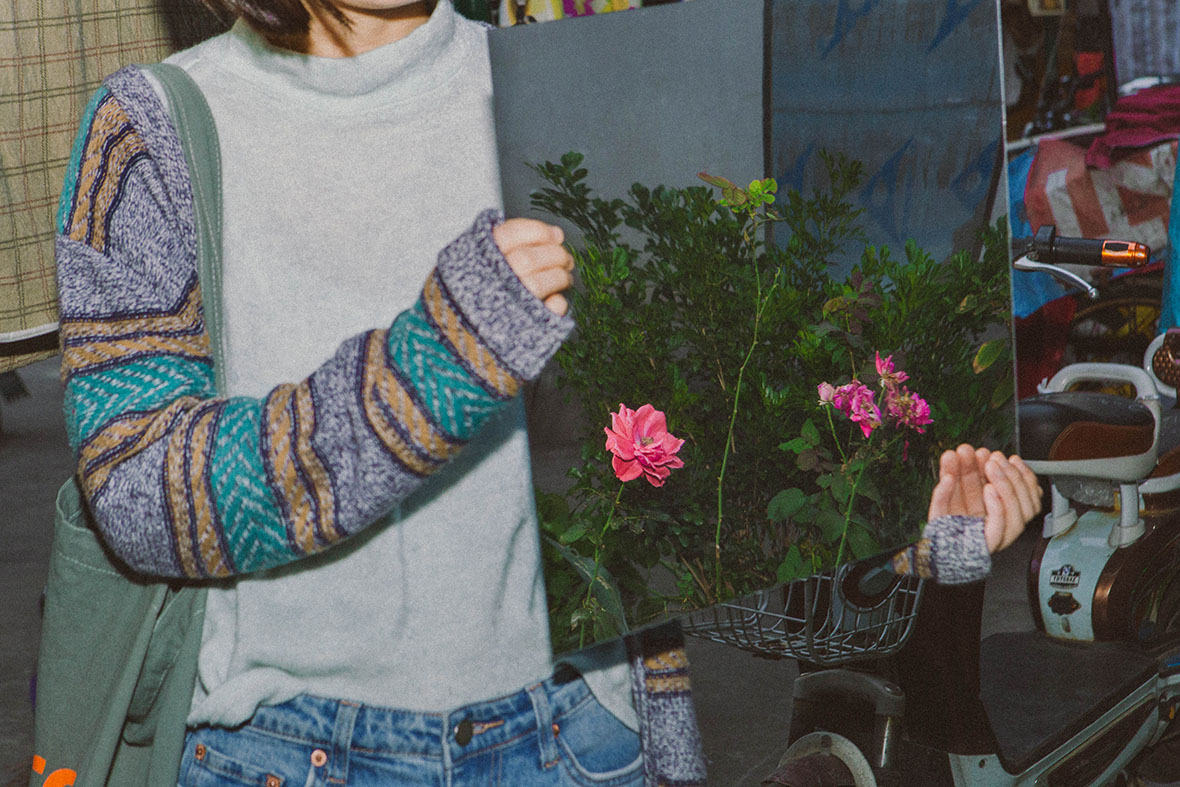