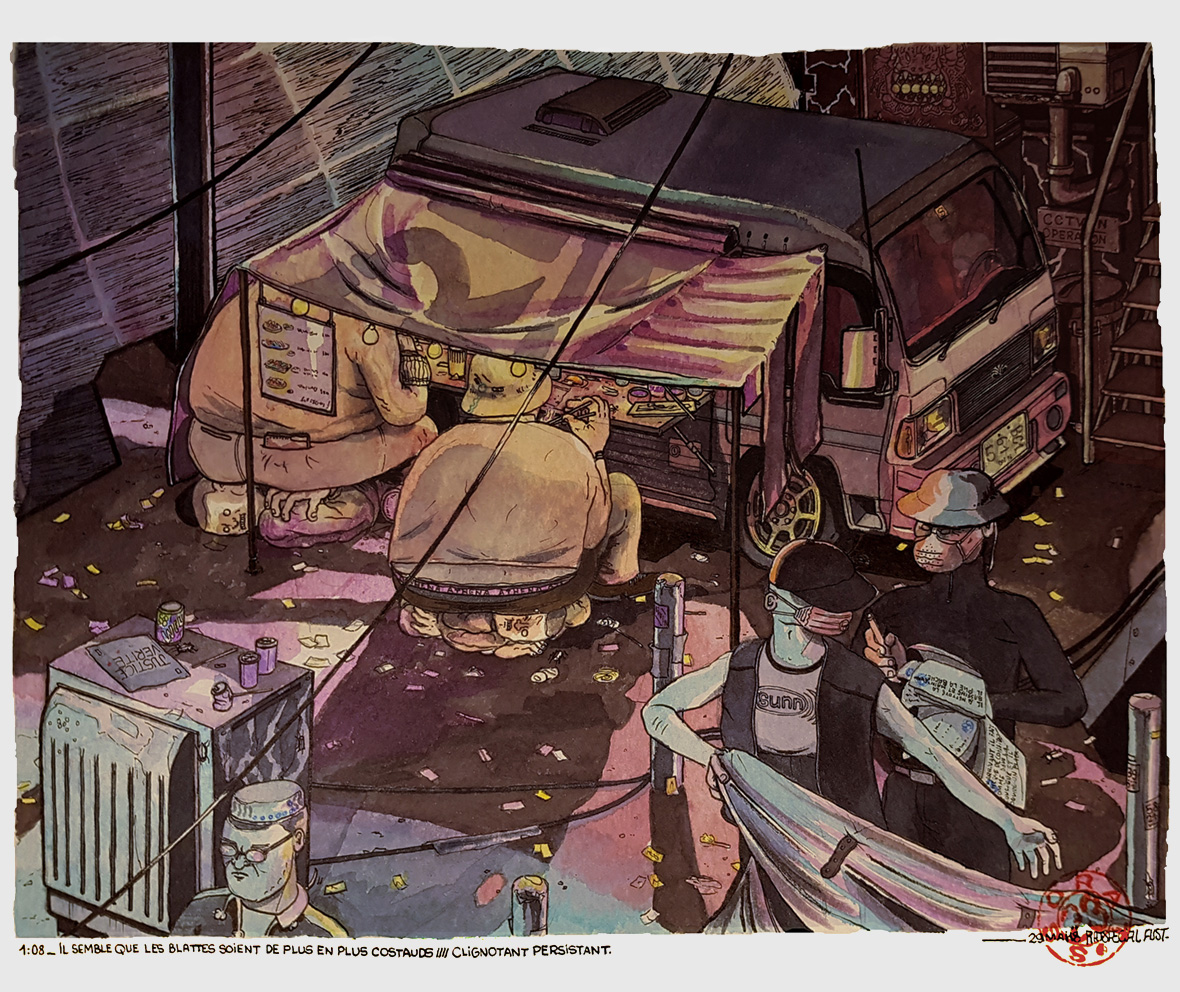 The art of Ratspecial Fust is deeply inspired by the megacities of Asia. Seoul, the place he now calls home, has been particularly meaningful in his development as an artist. The city’s grimy alleyways, towering architecture, and thick clusters of power lines are piled on top of each other in his illustrations, forming textured patterns and layers. These elements serve as the backdrop for a semi-imaginary universe populated by criminals and uncanny monsters. “The different levels, from the sewers to the rooftops, offer never ending possibilities for adventures,” Ratspecial says. “The city is shaped like a giant playground.” 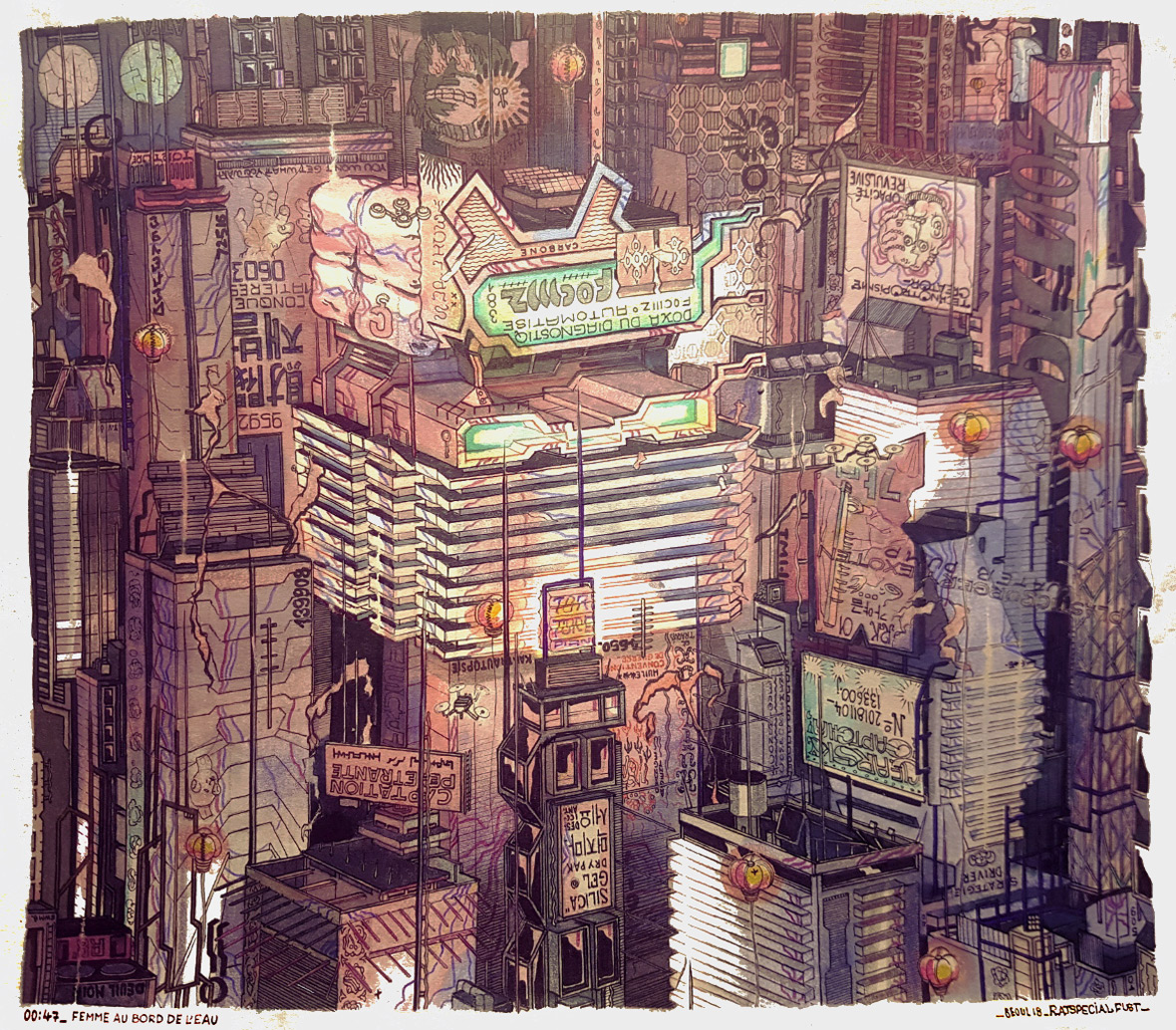 Growing up in France, Ratspecial was always fascinated by Asia; the cities seemed totally different from European cities, which he explored extensively as a graffiti writer. Even before having visited Asia, many of his illustrations were based on what he imagined the region’s metropolises to be like. These intricate works often dropped viewers into Akira-esque cityscapes, depicting streets littered with wrecked cars, fallen buildings, and unrecognizable debris—without first-hand experience of Asia, his imagination was free to take the reins. 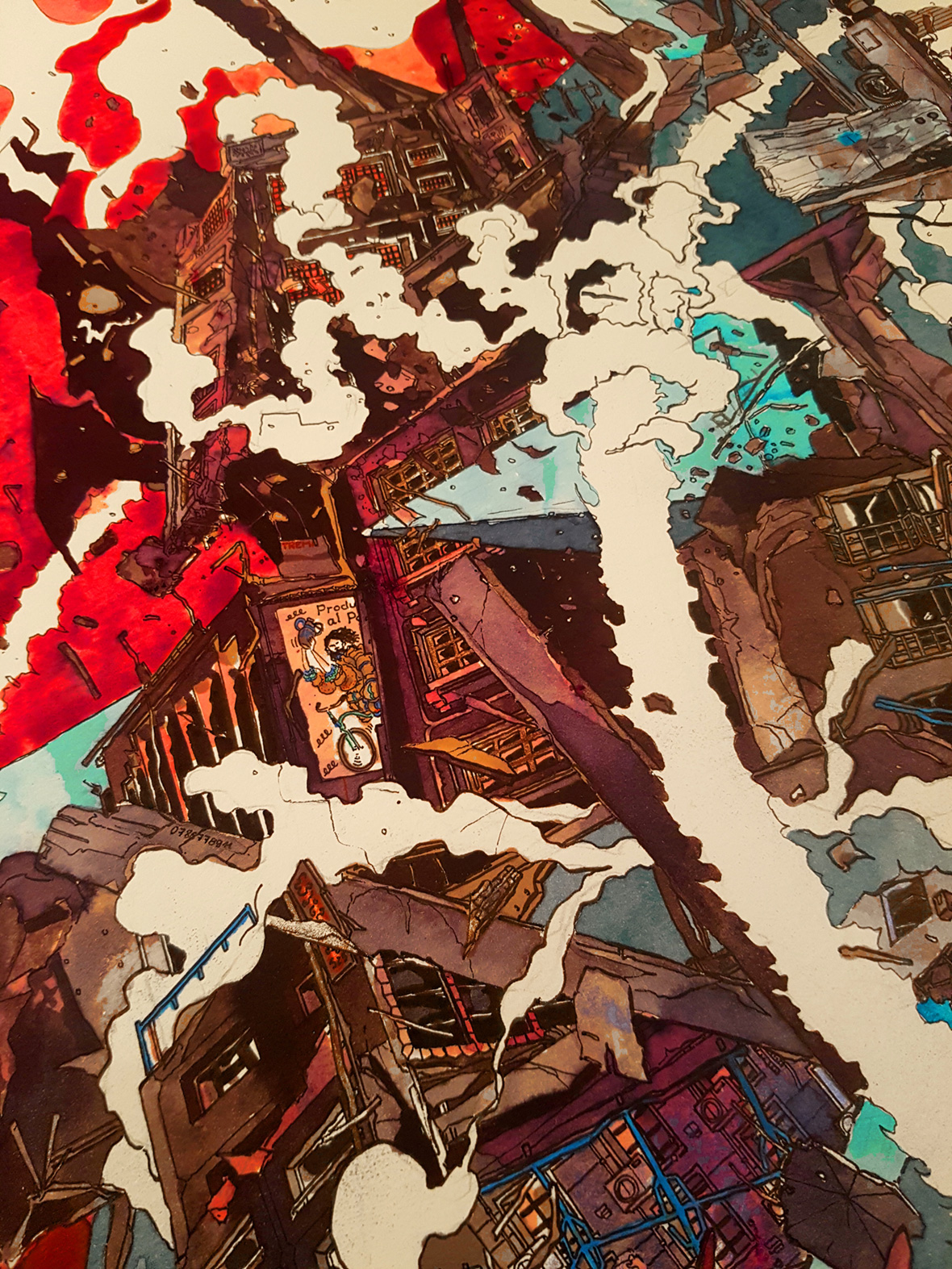 Moving to Seoul broadened his creative output. His late-night graffiti missions continued there, but they instilled in him an appreciation for the quieter, more personal moments of the city, which began to manifest in his work. Often, he found himself riding around on his bike just admiring the surroundings, forgetting to paint.

Still though, he often found himself purposefully seeking out spaces and situations that normal people would simply pass by: “I push myself into weird situations and try to commit these sights to memory as best I can.” 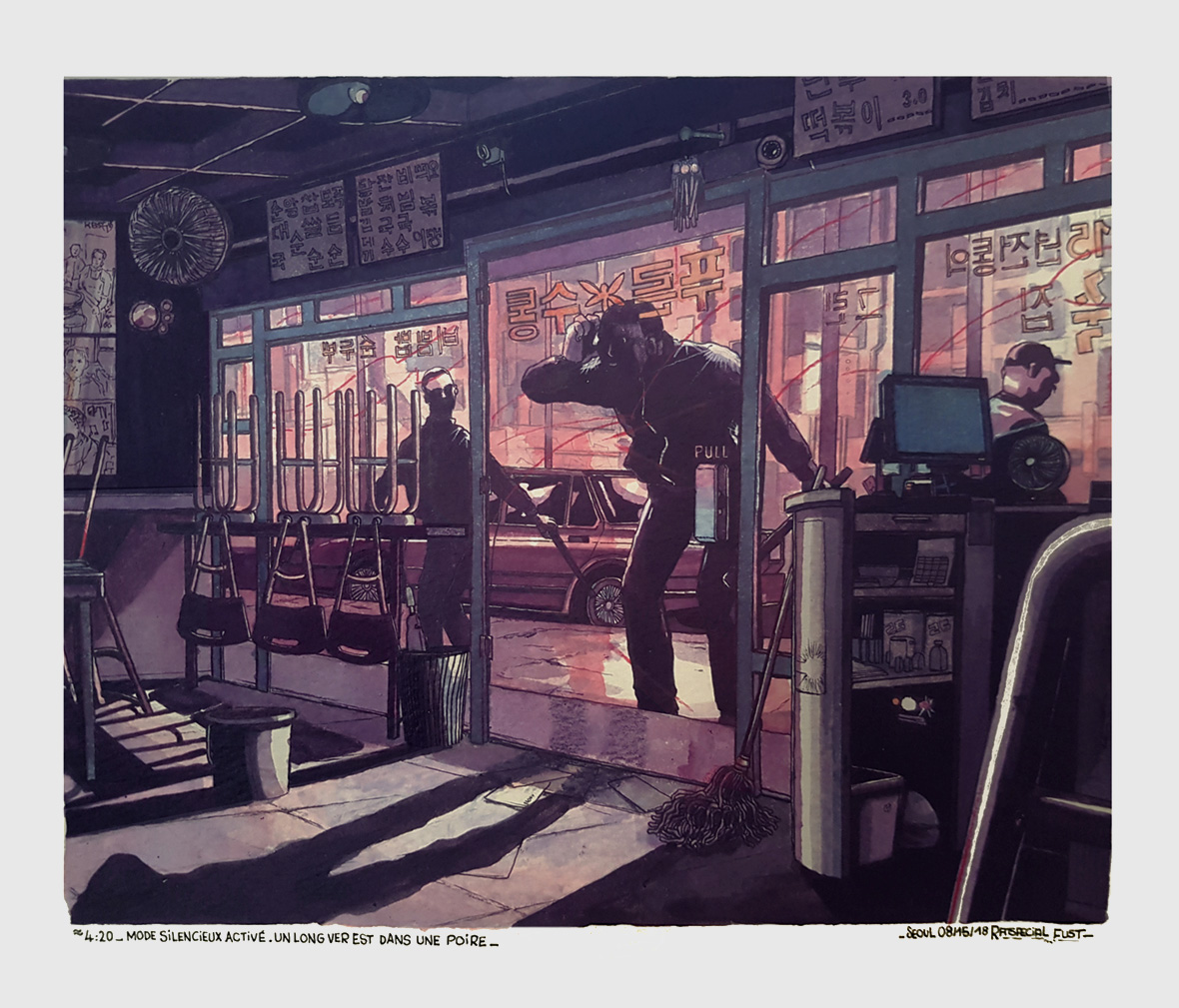 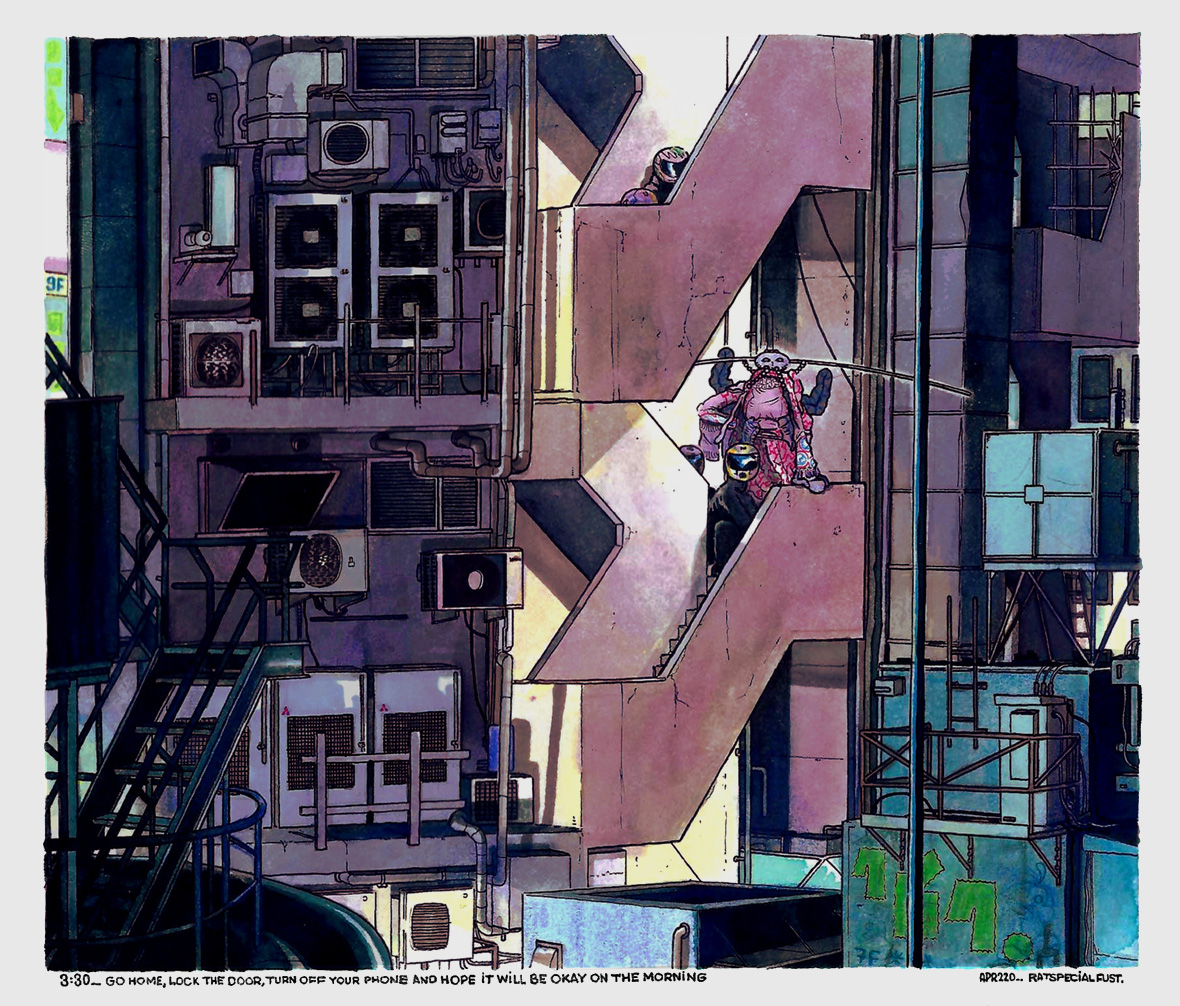 These weird situations are frequently inspiring. The seedy characters and peculiar happenings that he comes across in his nighttime tagging excursions often serve as the basis for his illustrations. “I once met a hunchback living in a sewage drain. I never met him again, but I left a message for him that I drew on a concrete pole along with a sandwich,” he says. “If you open your eyes, the doors for parallel worlds are hidden everywhere.” 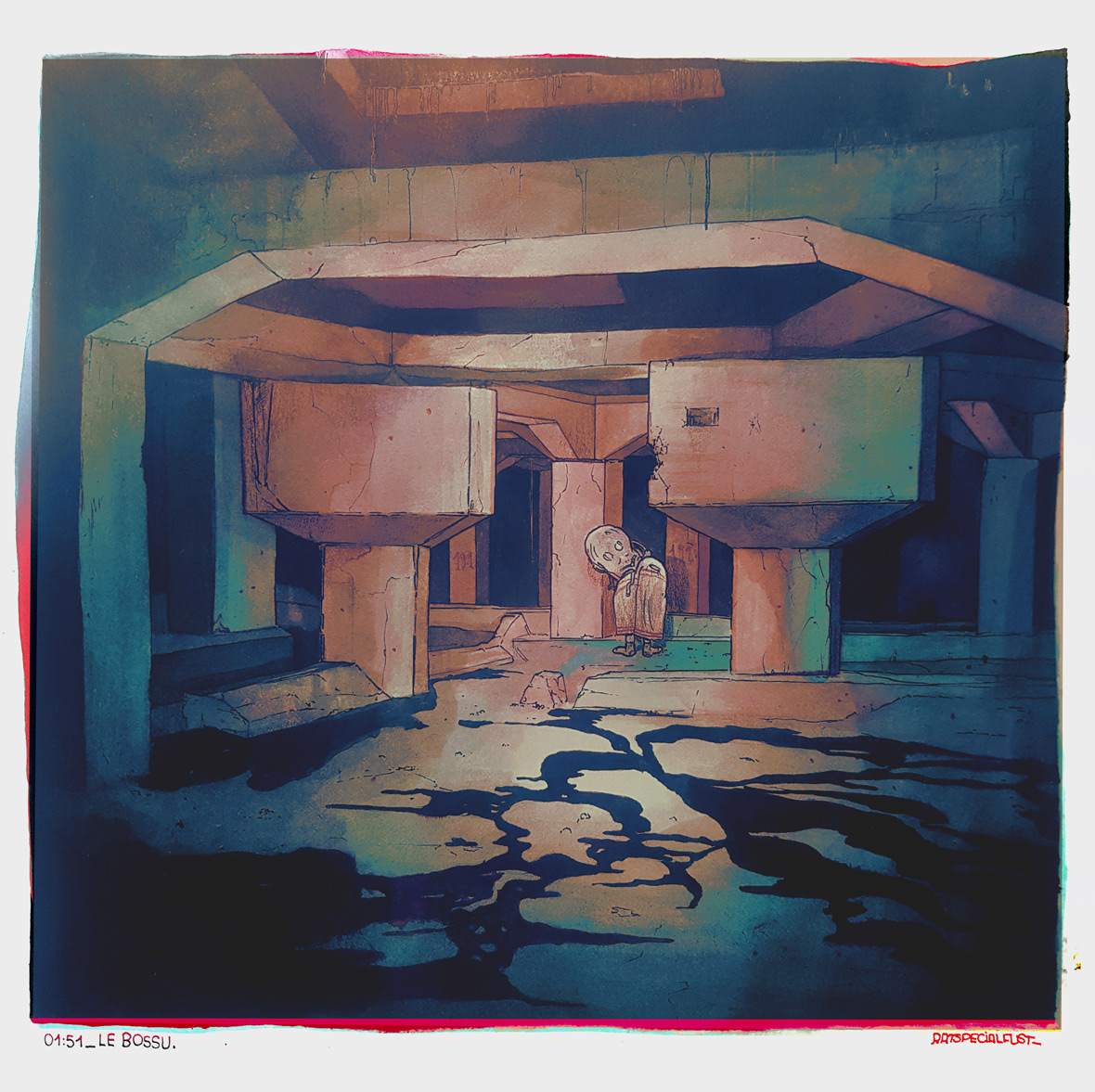 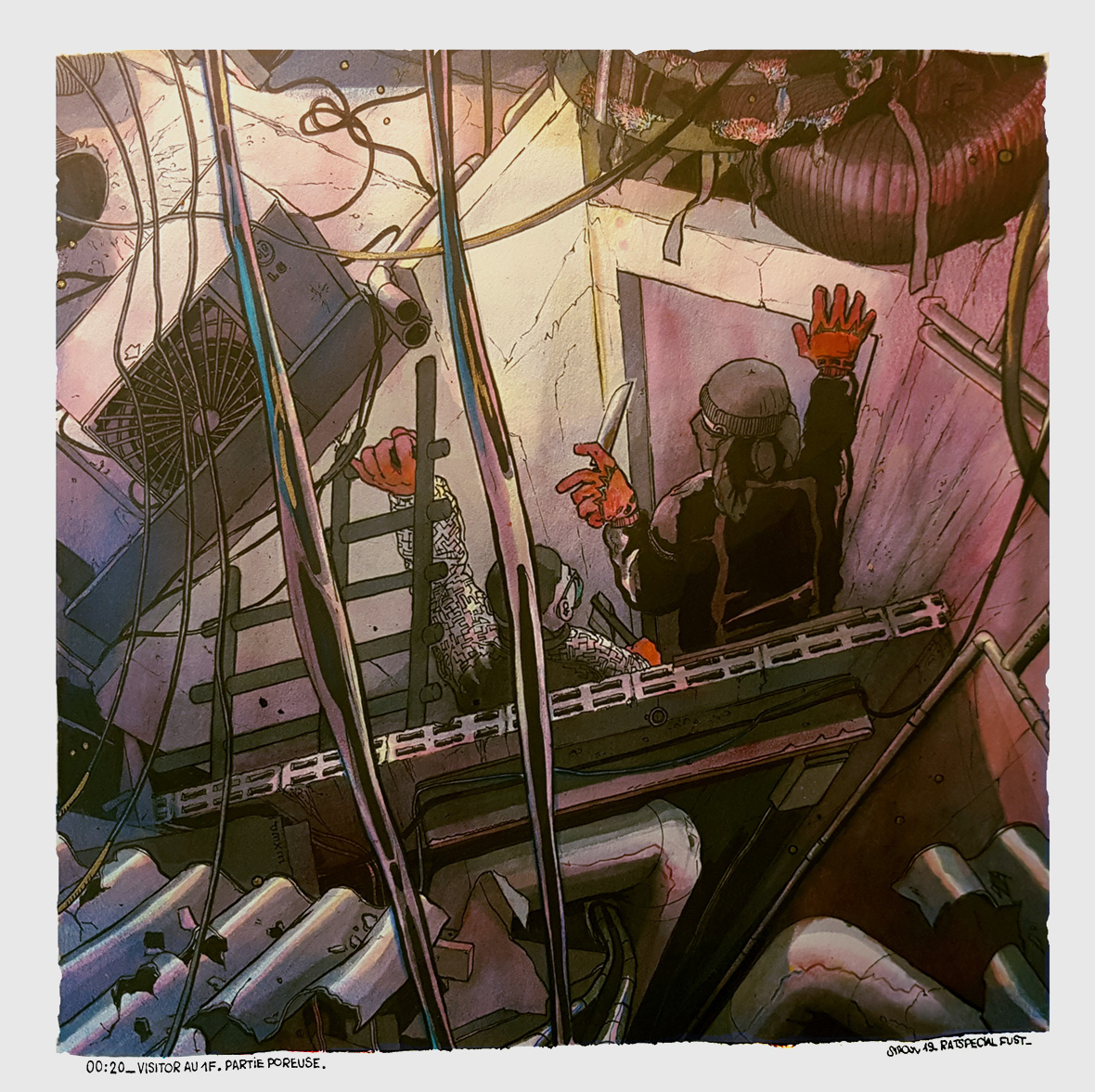 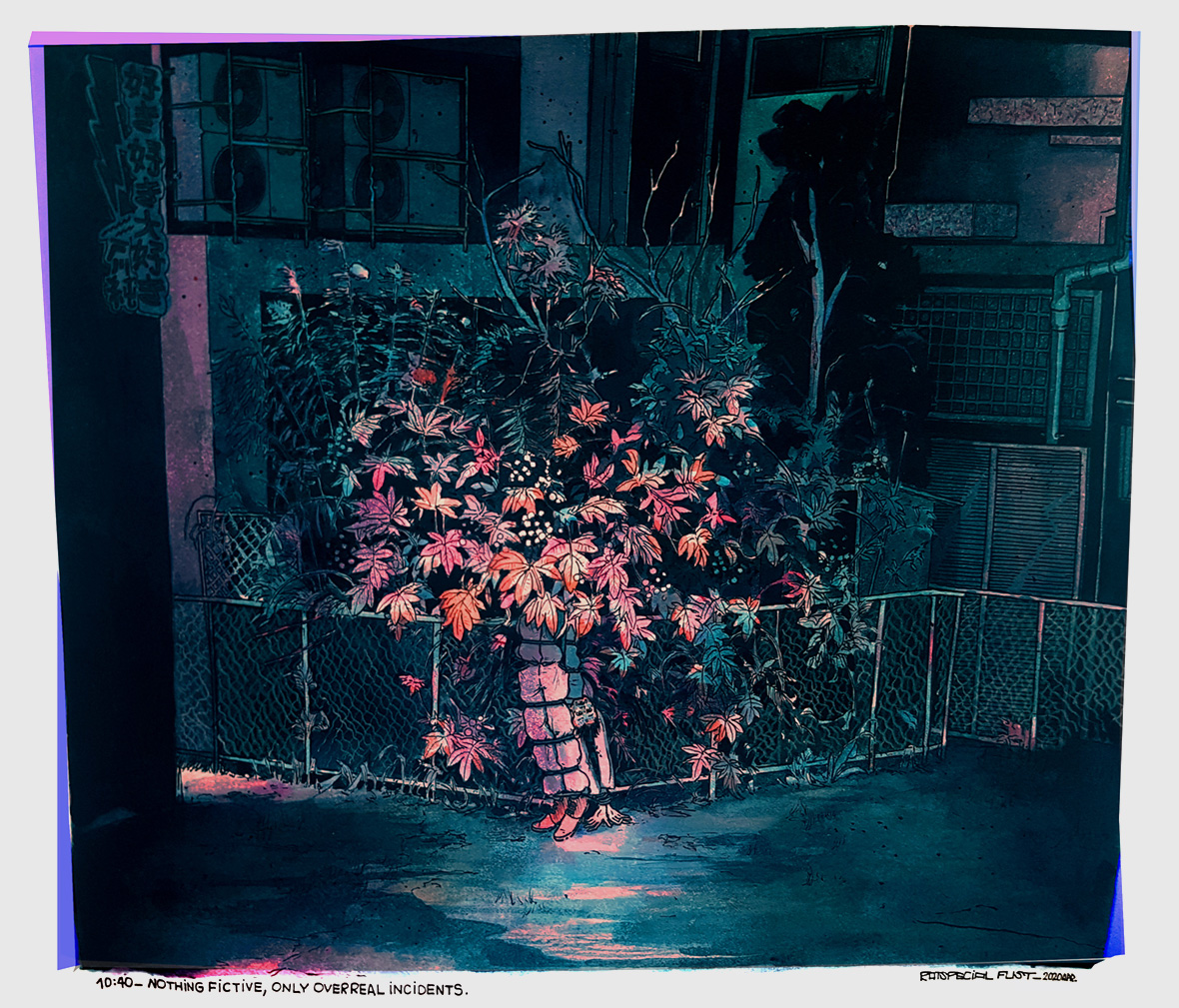 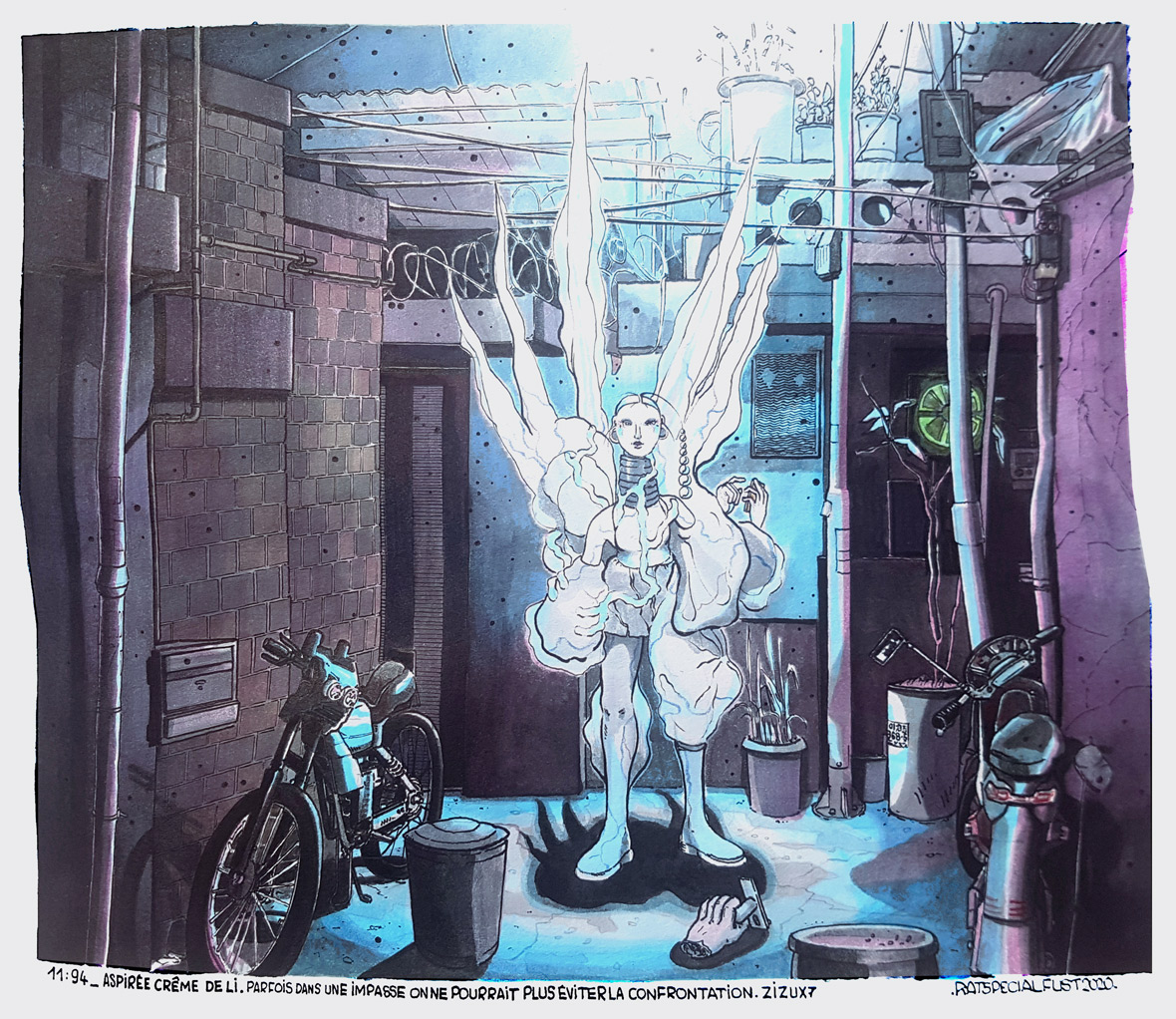 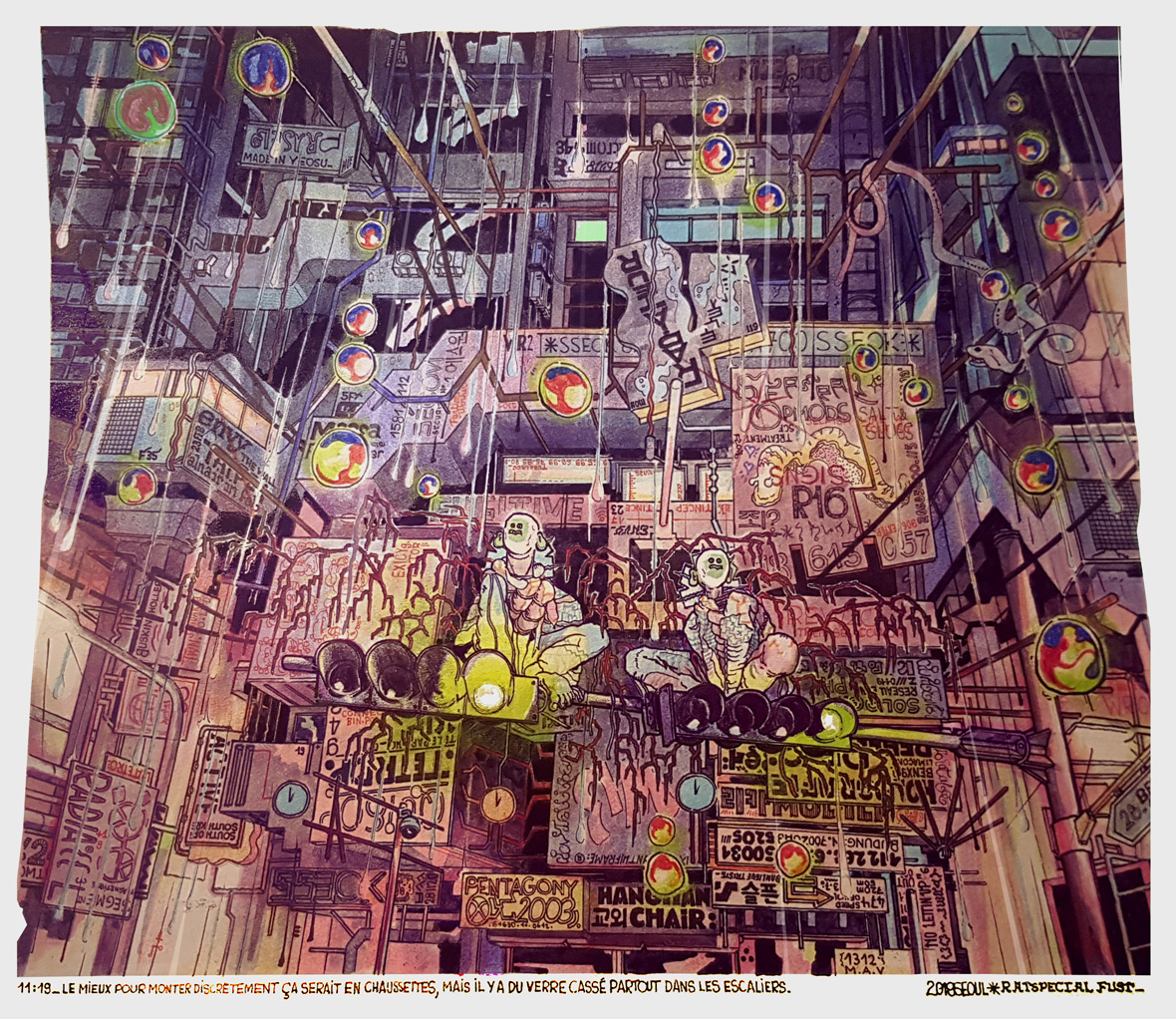 As a graffiti writer, Ratspecial has always preferred physical mediums and had little interest in digital art. When not painting on walls, he works with ink and markers. One of these hand-drawn illustrations usually takes a couple of days to finish, but he enjoys working in intense stretches so as to not break his concentration. “I rarely work on one drawing longer than a week,” he says.“I need to stay in the same mood or I’m not happy with the results.” 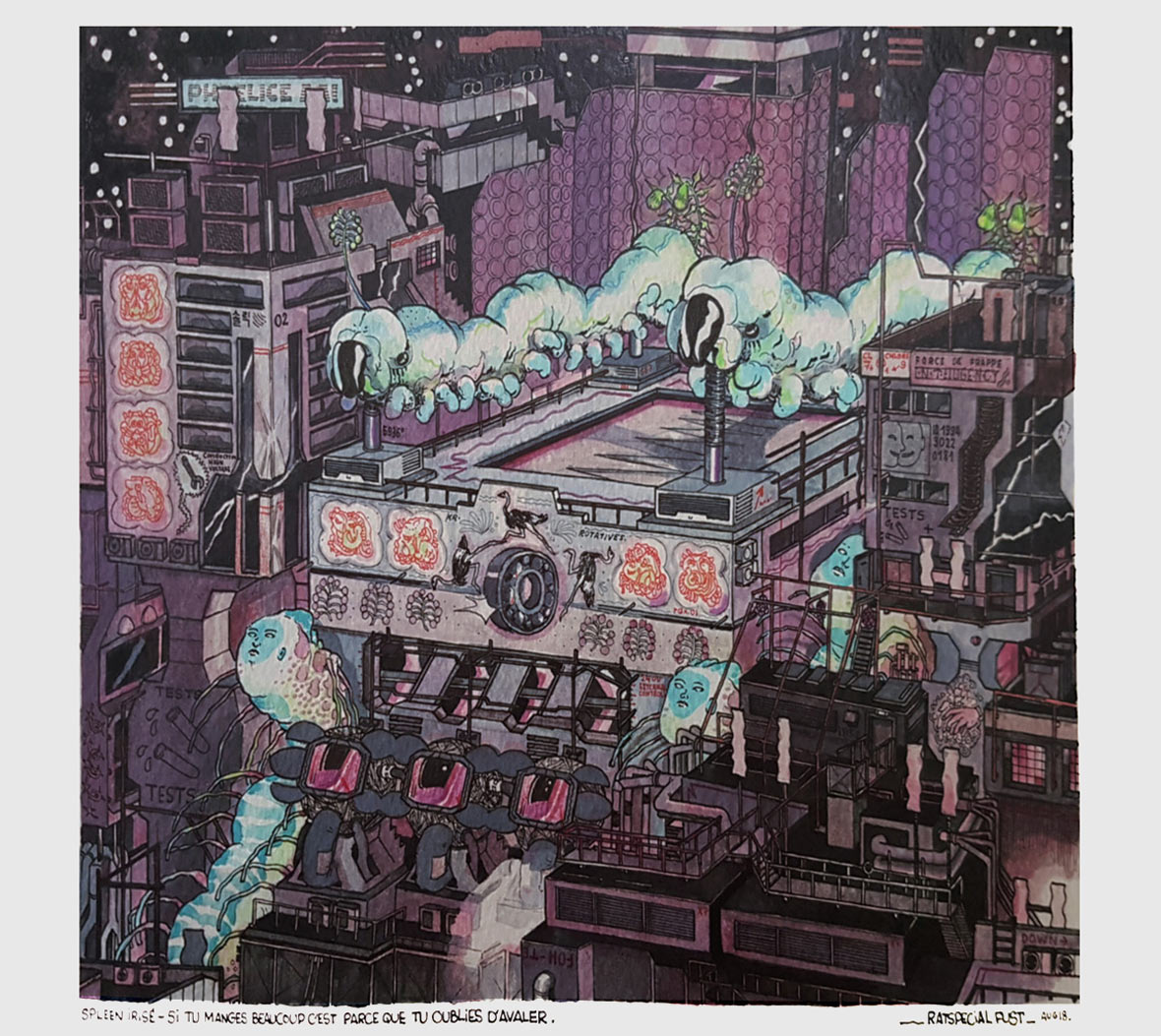 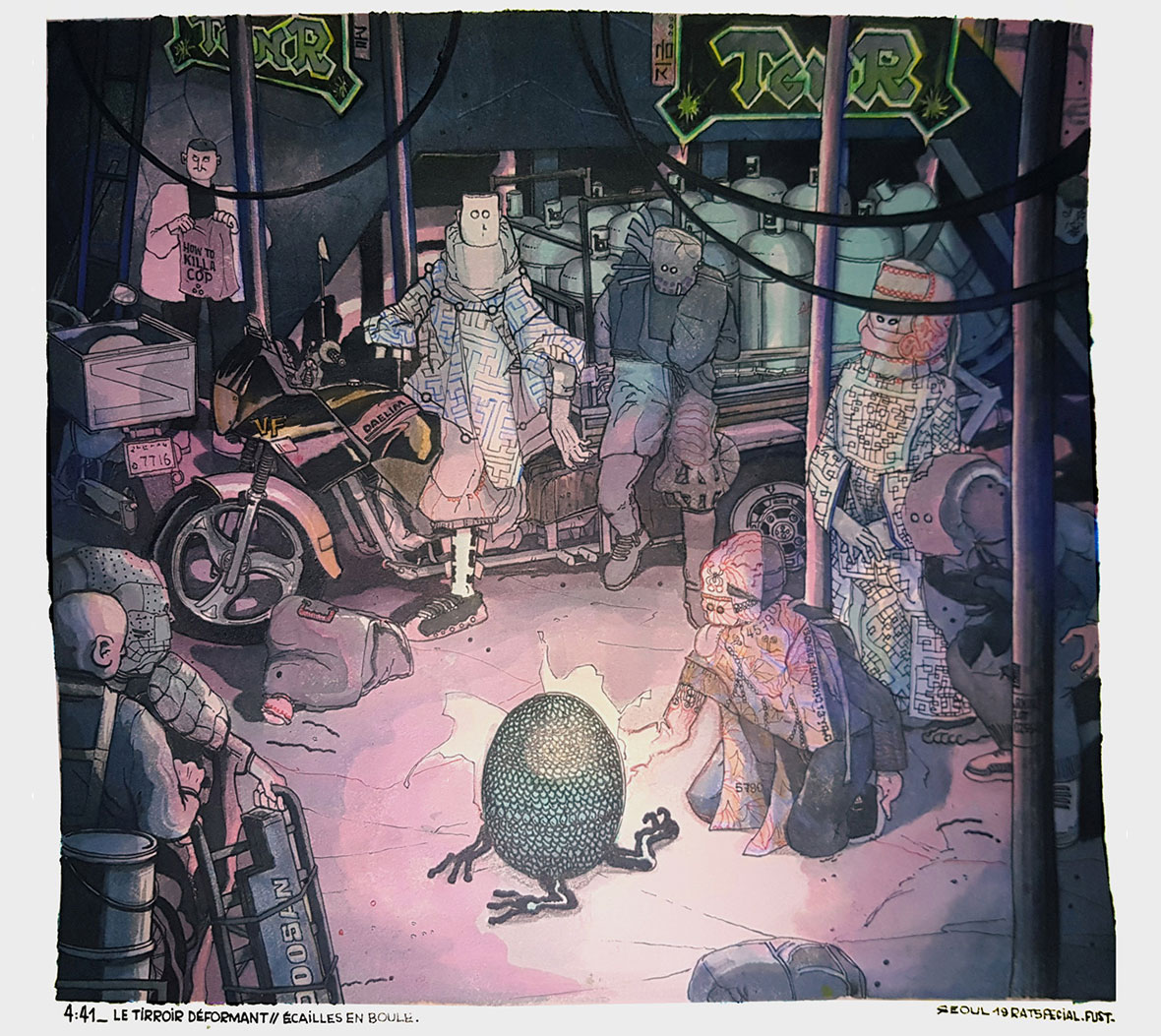 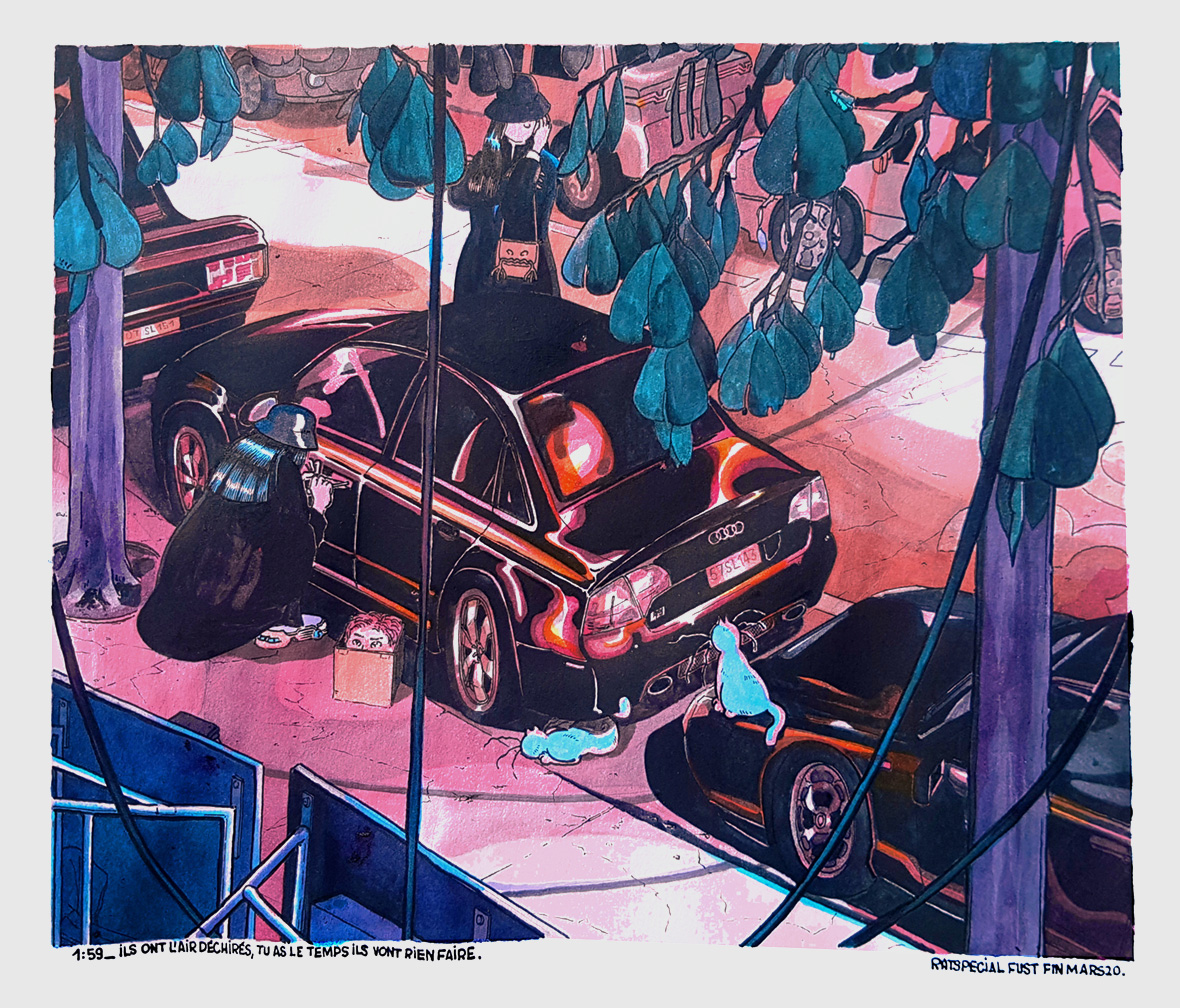 Seoul, like many cities, often paves over its history, and this loss is part of what Ratspecial aims to capture in his art. In a way, his works are memorials of the city’s heritage, strips lost in the wake of gentrification and corners forgotten and neglected, all pressed tightly beside glittering highlife and corporate excess. “These places with a condemned future offer visual extremes; they’re high-contrast situation,” he says. “I’m interested in drawing that part of reality, even if it’s sad.” 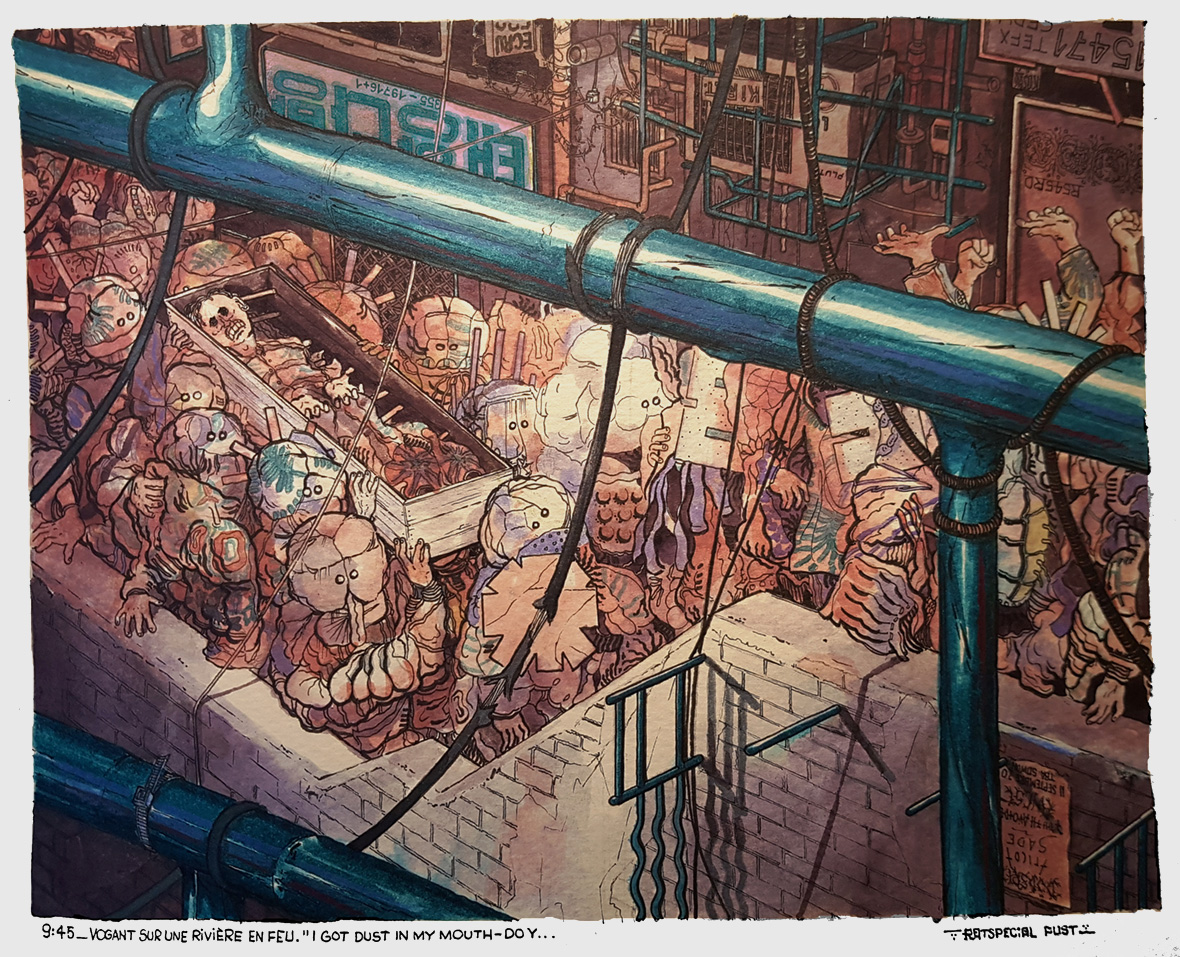