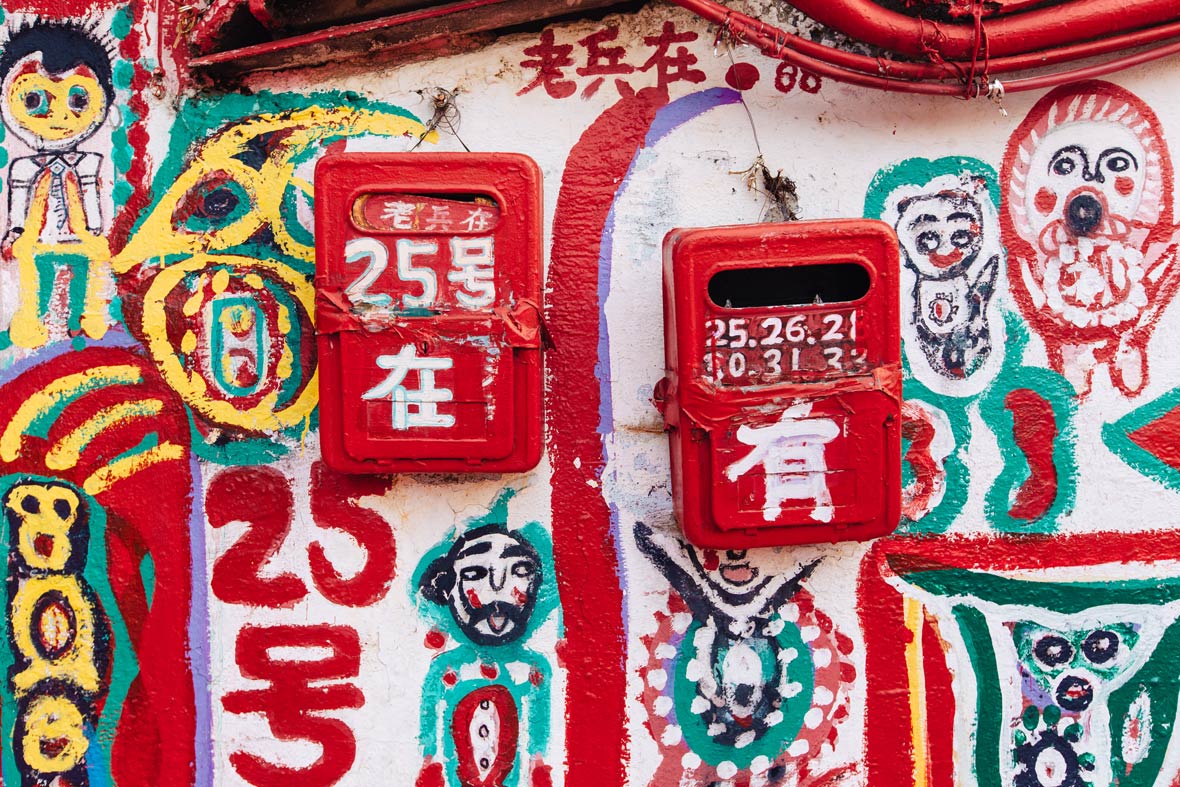 After the end of the Chinese Civil War in 1949, the KMT retreated to Taiwan. At that time, they began constructing housing for the soldiers of the ROC Armed Forces as well as their family members. These communities, known as military dependent villages, were built with limited funds and residents had no ownership rights since the property was on government-owned land. These villages were widespread all throughout Taiwan, but over the years, have deteriorated into slum-like conditions. 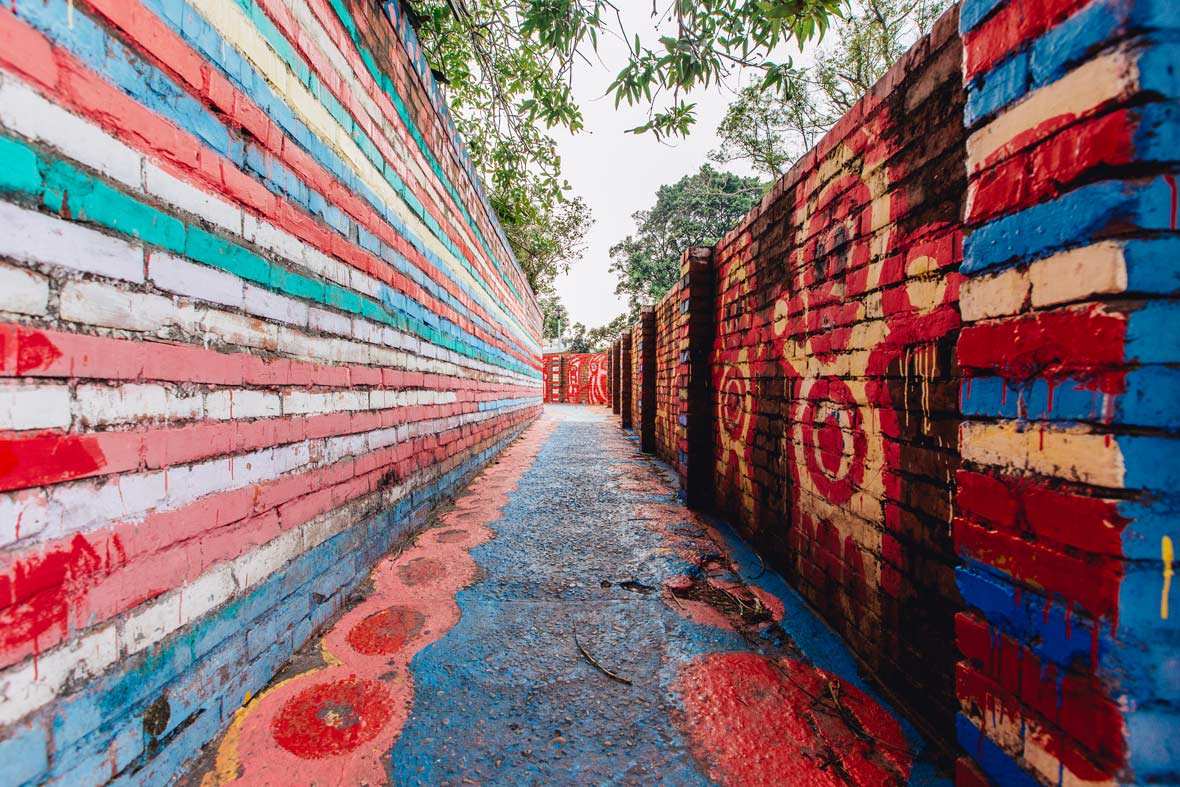 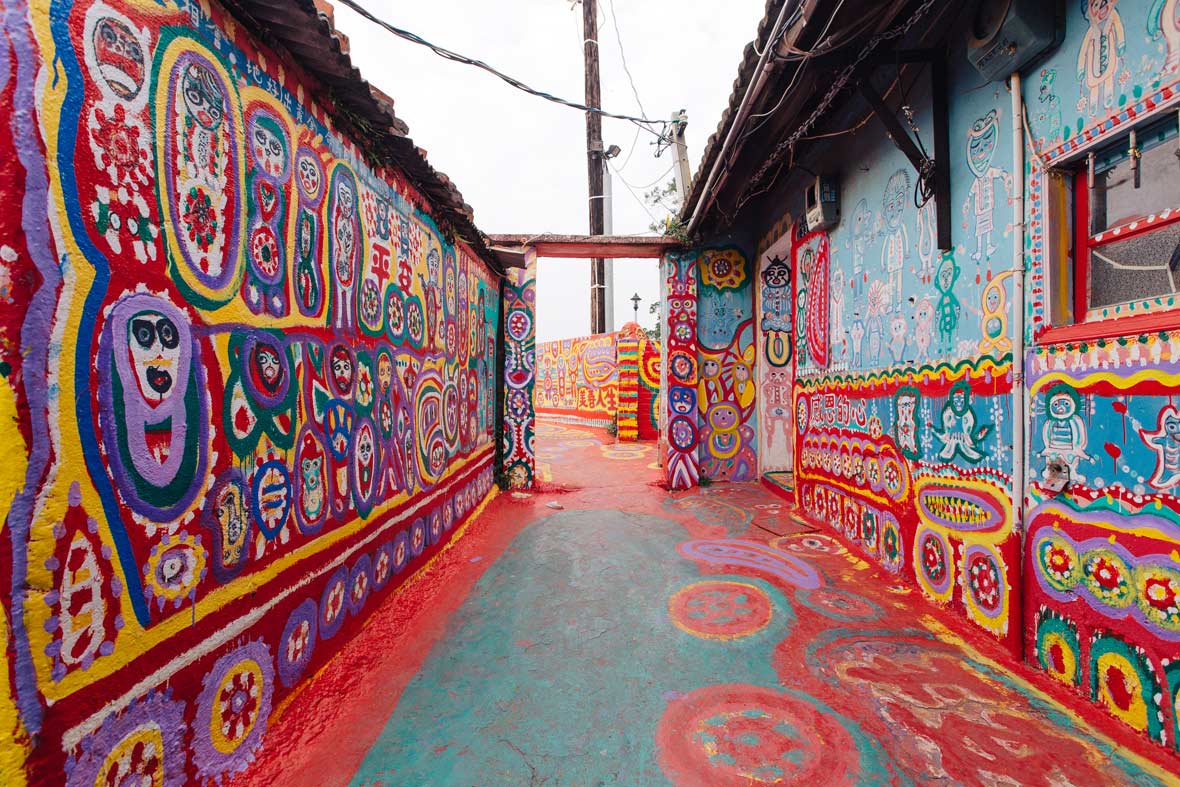 In Taichung, there’s a place known as Rainbow Village. The now wildly popular tourist attraction was once a military dependent village, decrepit and run-down. Huang Yongfu, a resident since the early days of this village, is the man behind this transformation. He has single-handedly painted the walls, doors, and even roads throughout the area with a dizzying array of vibrant colors, which has garnered him the fitting nickname of Rainbow Grandpa. 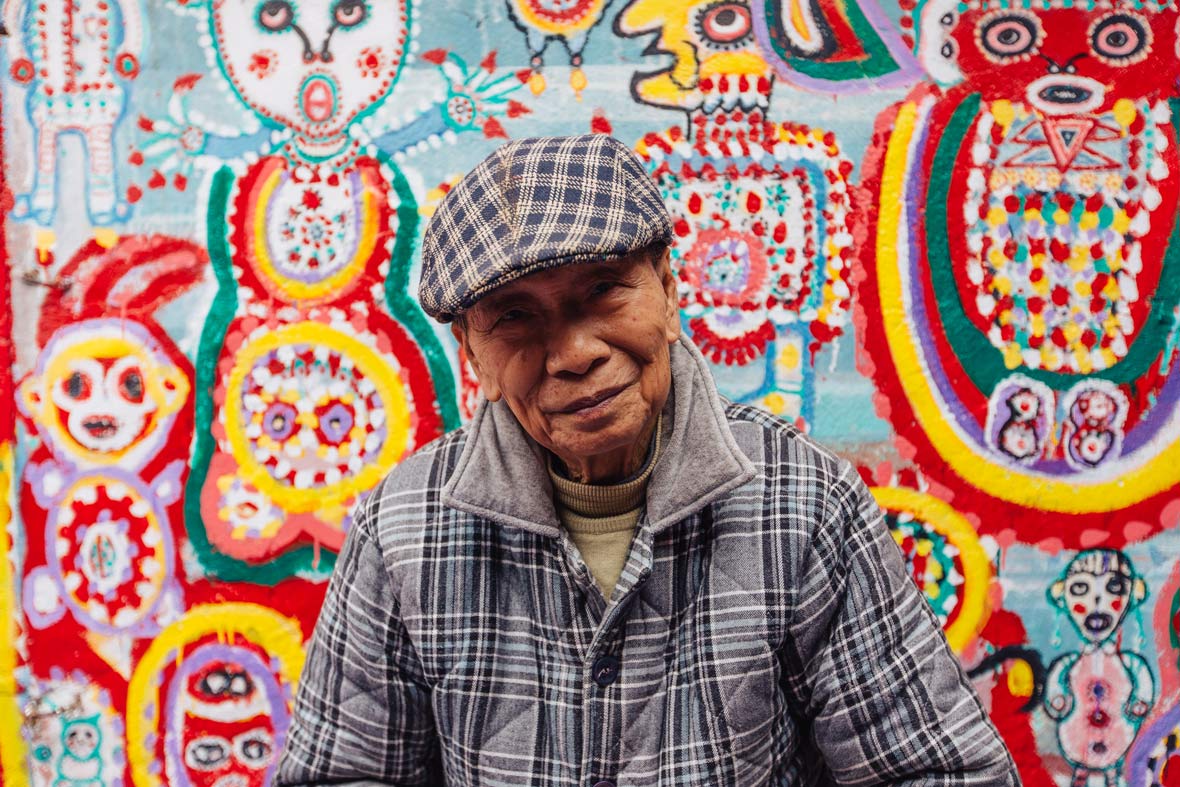 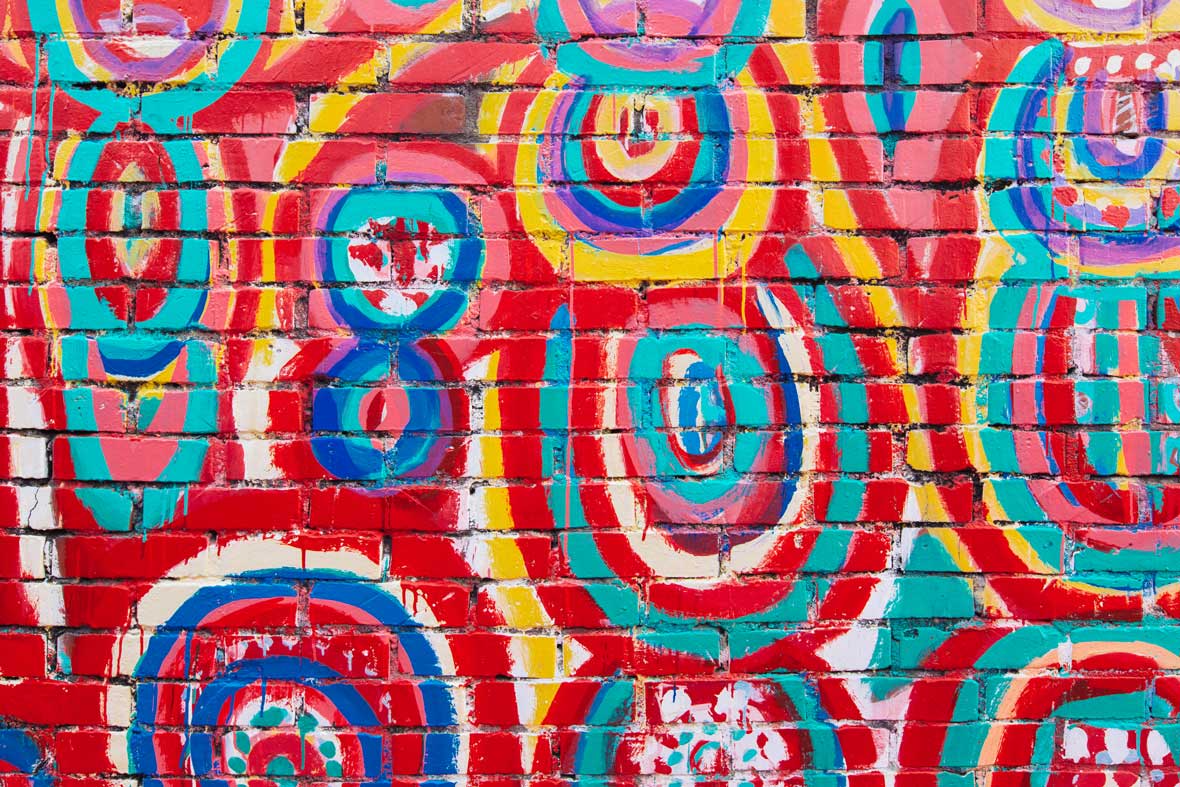 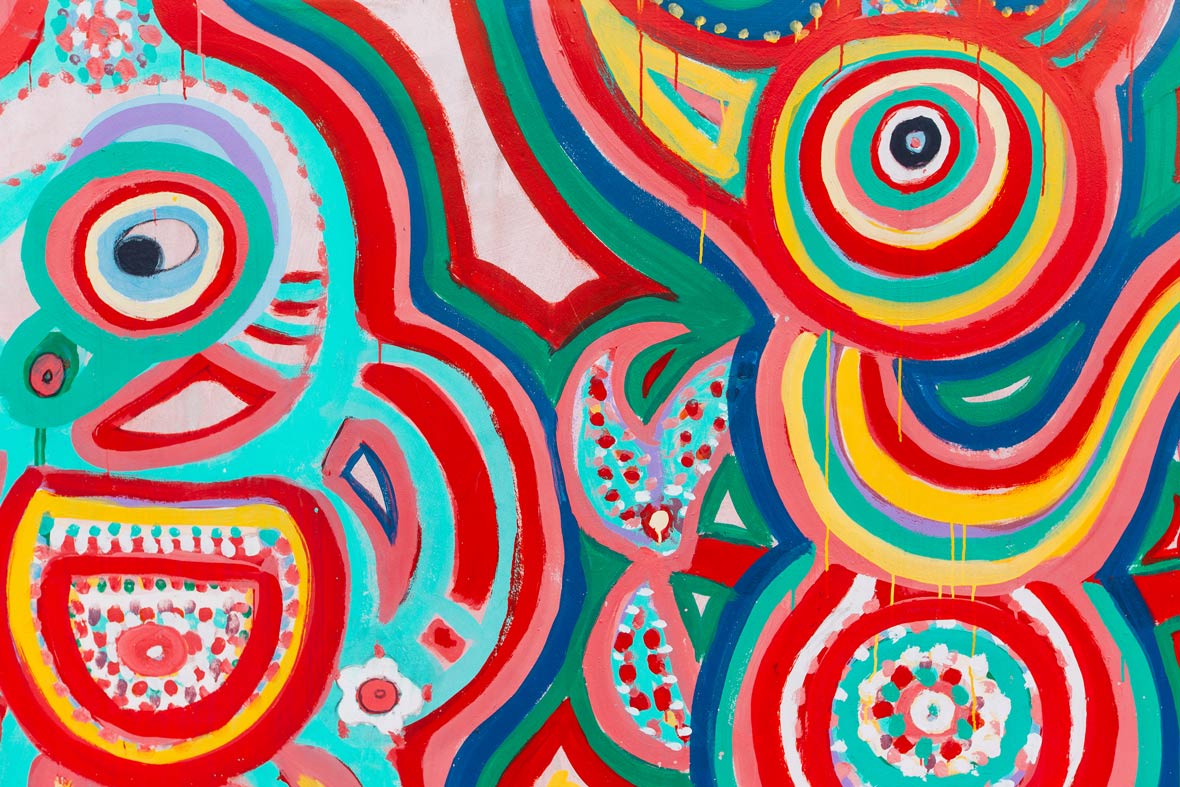 In this modern era of skyscrapers and high rises, many military dependent villages, including this one, are viewed as nothing more than nuisances, with the potential to be turned into lucrative property. Similar to the fate of so many other military housing complexes from this era, this one was also poised for demolition. But through his artwork, Rainbow Grandpa has managed to preserve not only his beloved village, but also his nostalgic memories and a piece of early Taiwanese culture. The scheduled demolition was delayed, and was eventually called off, as thousands of signed petitions flooded into the mayor’s office. In 2014, the village officially became the “Rainbow Village Art Park” which includes Huang Yongfu’s residence as well as six other households. 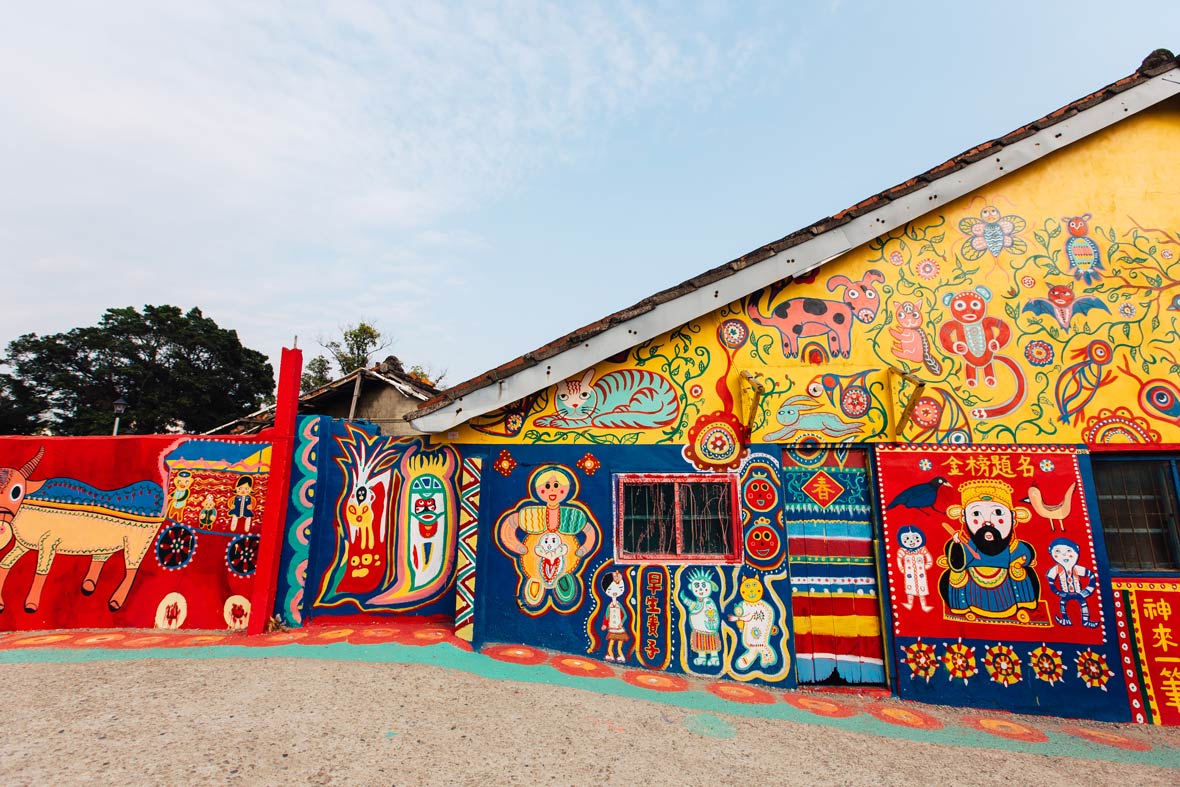 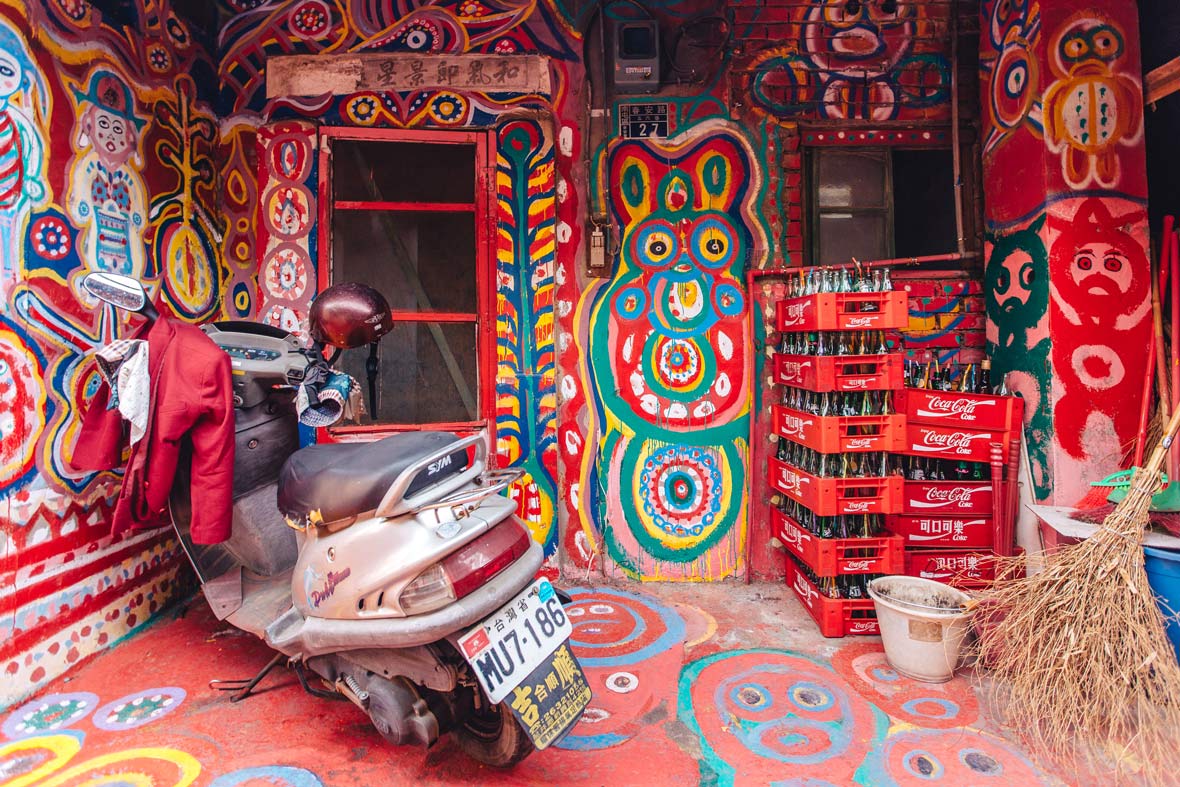 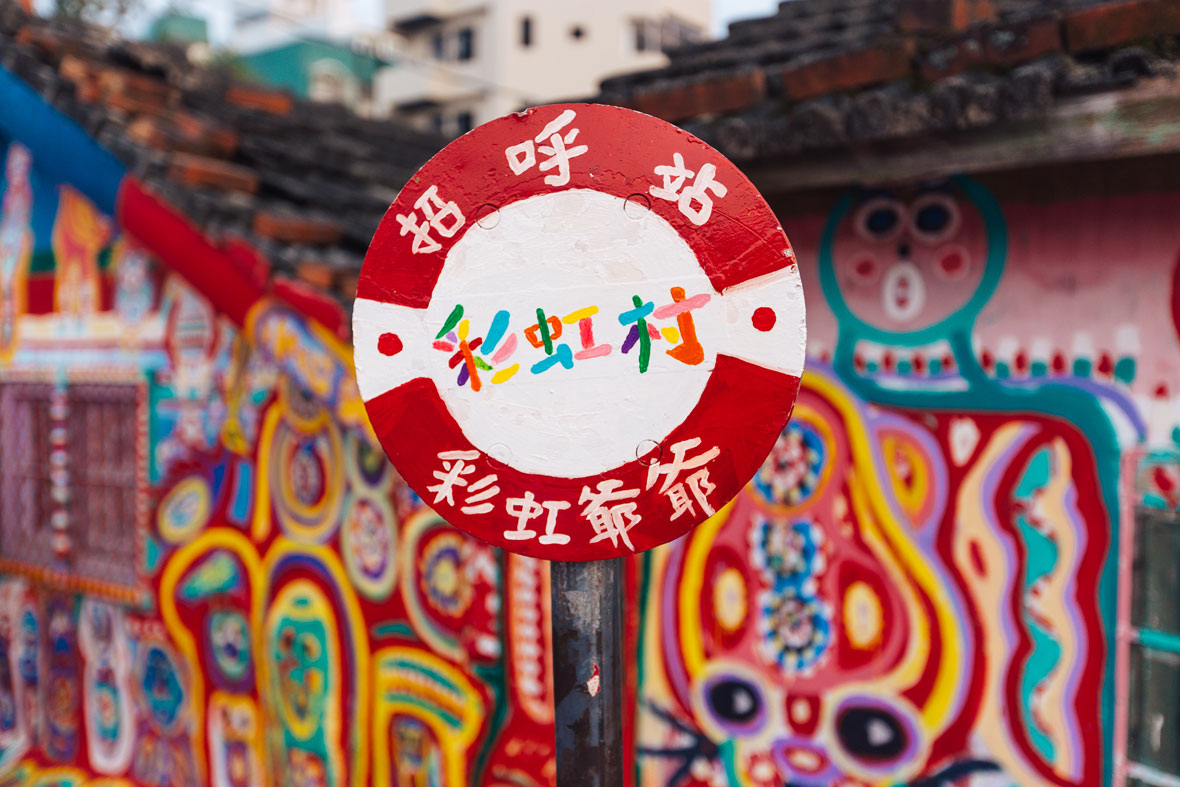 As an ex-soldier with no formal art training, Huang Yongfu reveals his only sources of inspirations are extracted from his everyday life, as well as newspapers that he reads on a daily basis. Using pension money, he started purchasing art supplies and began the daunting task of painting the village back in 2008. His colorful work involves imaginary characters, friendly animals, and a myriad of abstract designs. He has also inscribed numerous uplifting messages intended for visitors such as Ping An Bai Fu, meaning peace and best of luck. 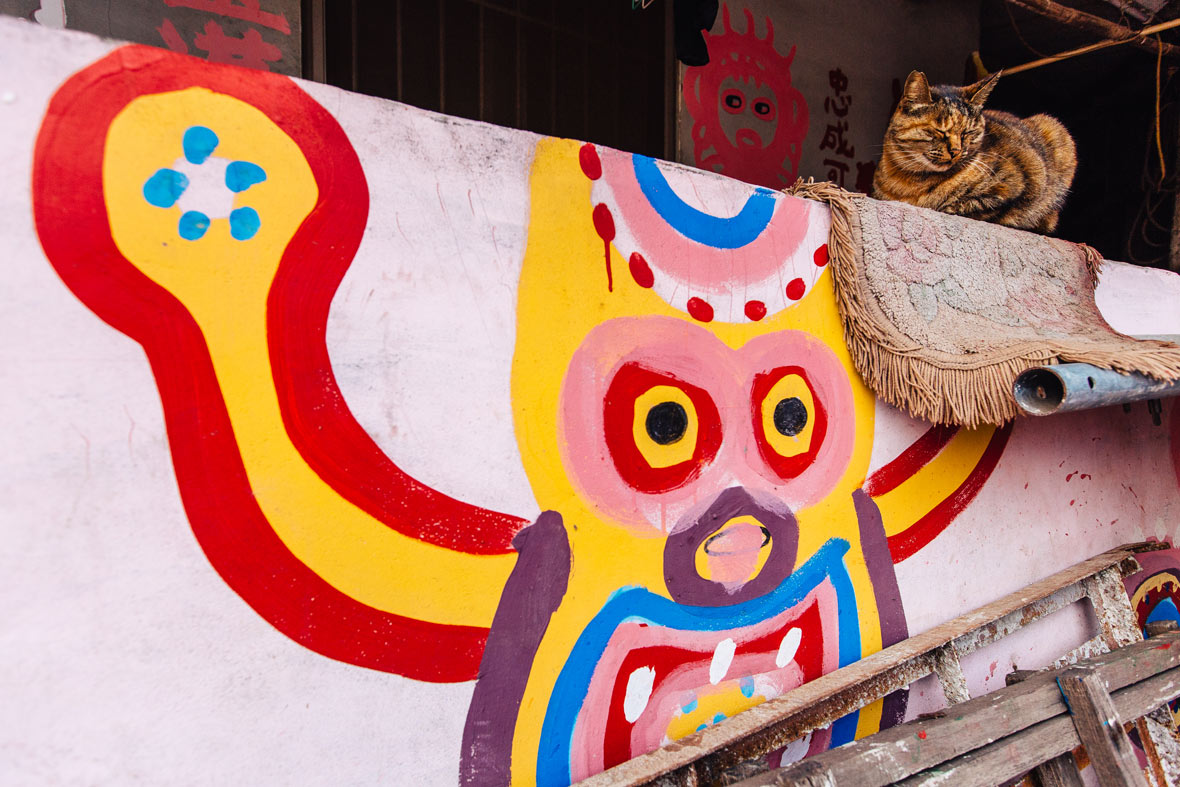 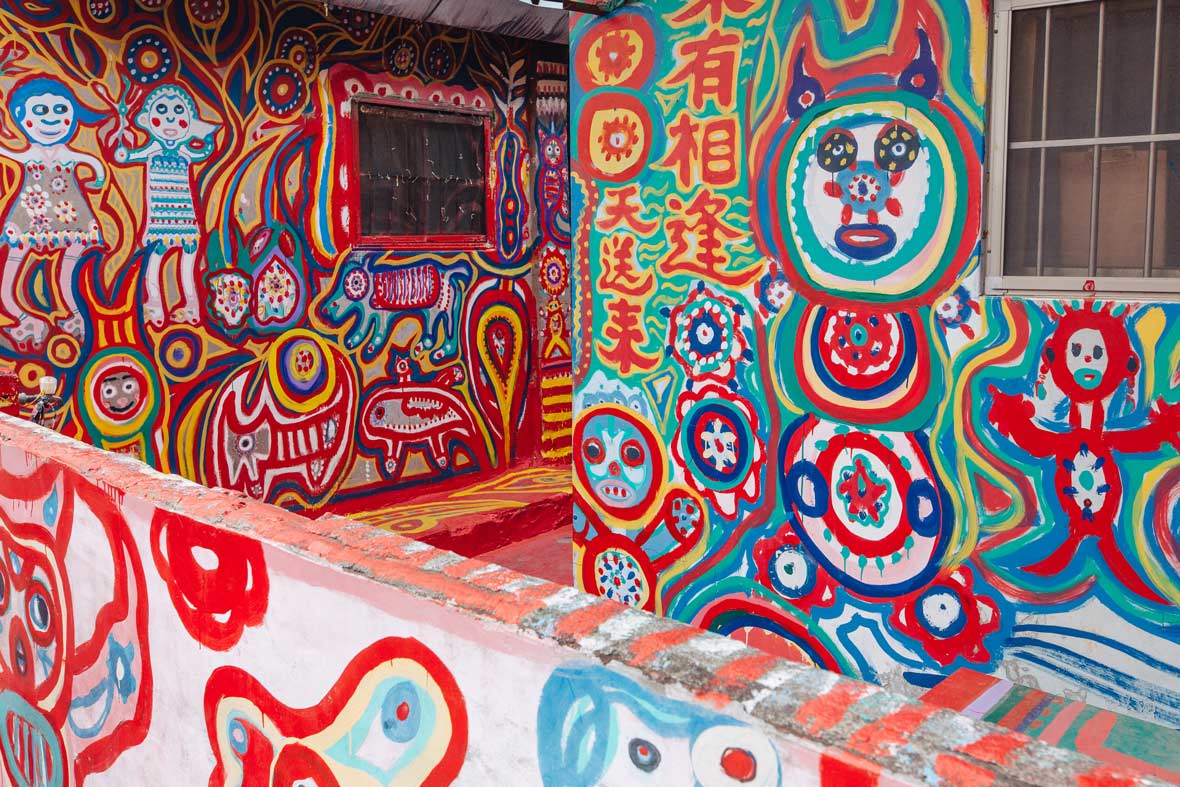 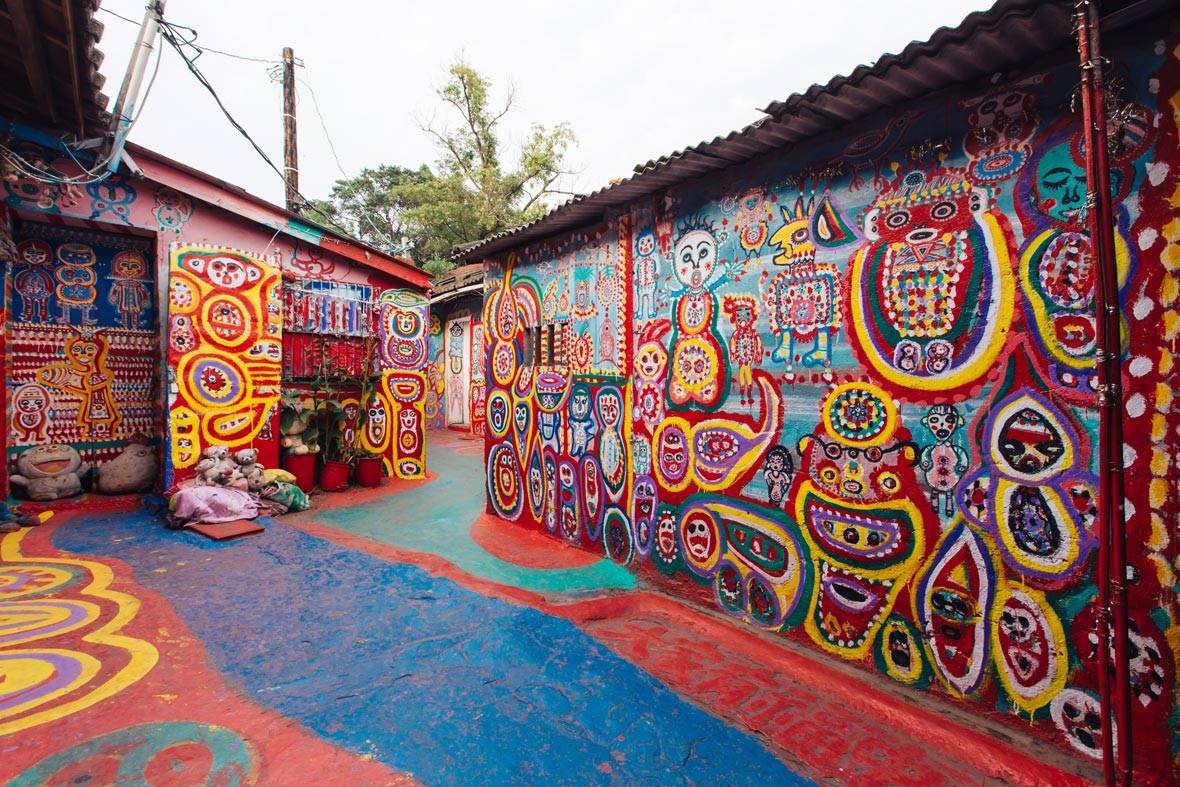 There is also a controversial, sociopolitical side to this story. Some argue that the artwork is no different from illegal graffiti, and many residents could’ve received a substantial amount of government compensation from the demolition. In addition to that, they would also be relocated into modern and better-equipped housing. In 2011, a neighbor, highly disgruntled by the number of loud tourists and the amount of trash that they would leave behind, voiced his discontent by spray painting Lao Bu Xiu in black over some of the artwork. This scathing message was intended for Mr. Huang, telling him behave more appropriately for his age. 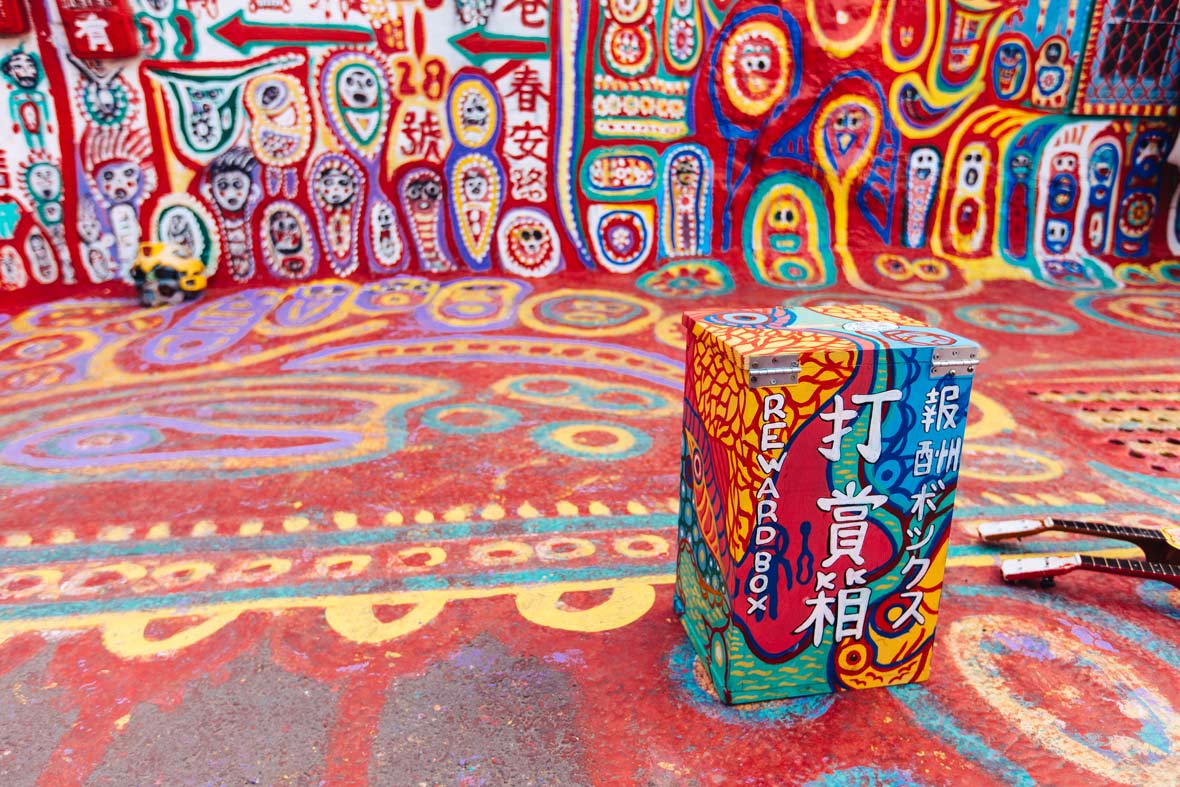 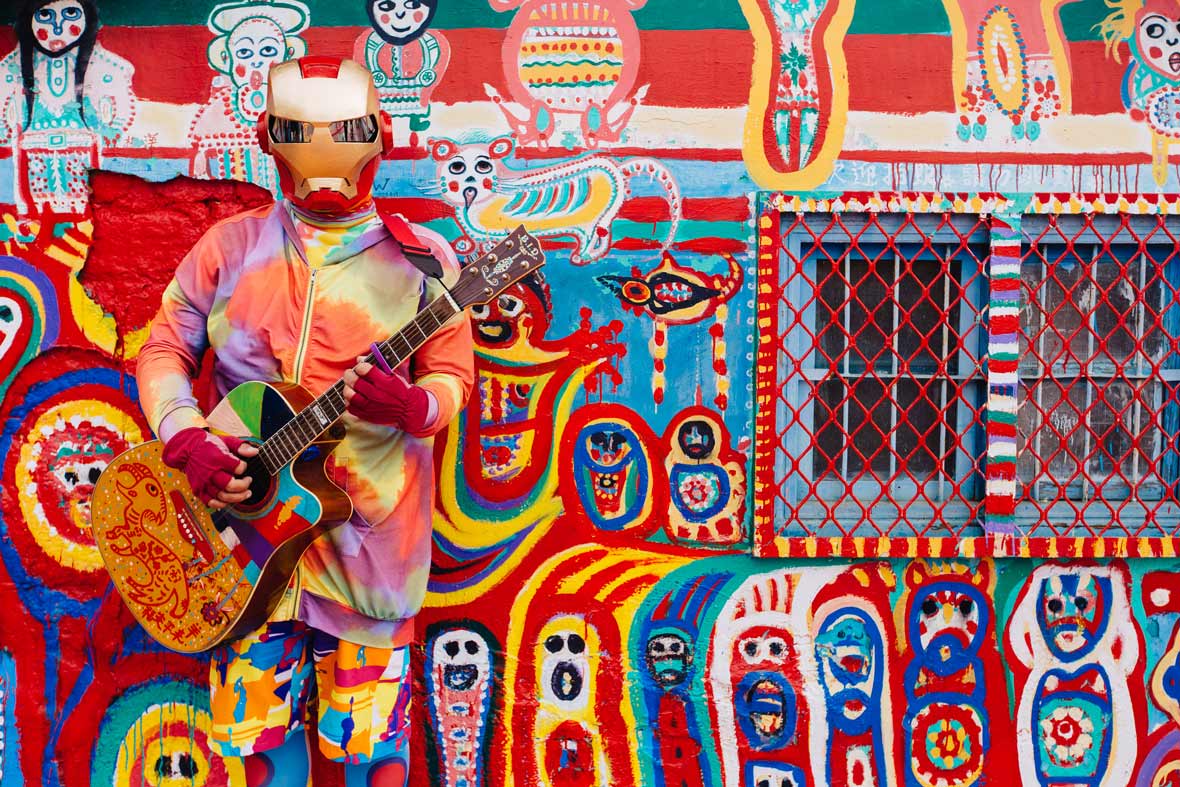 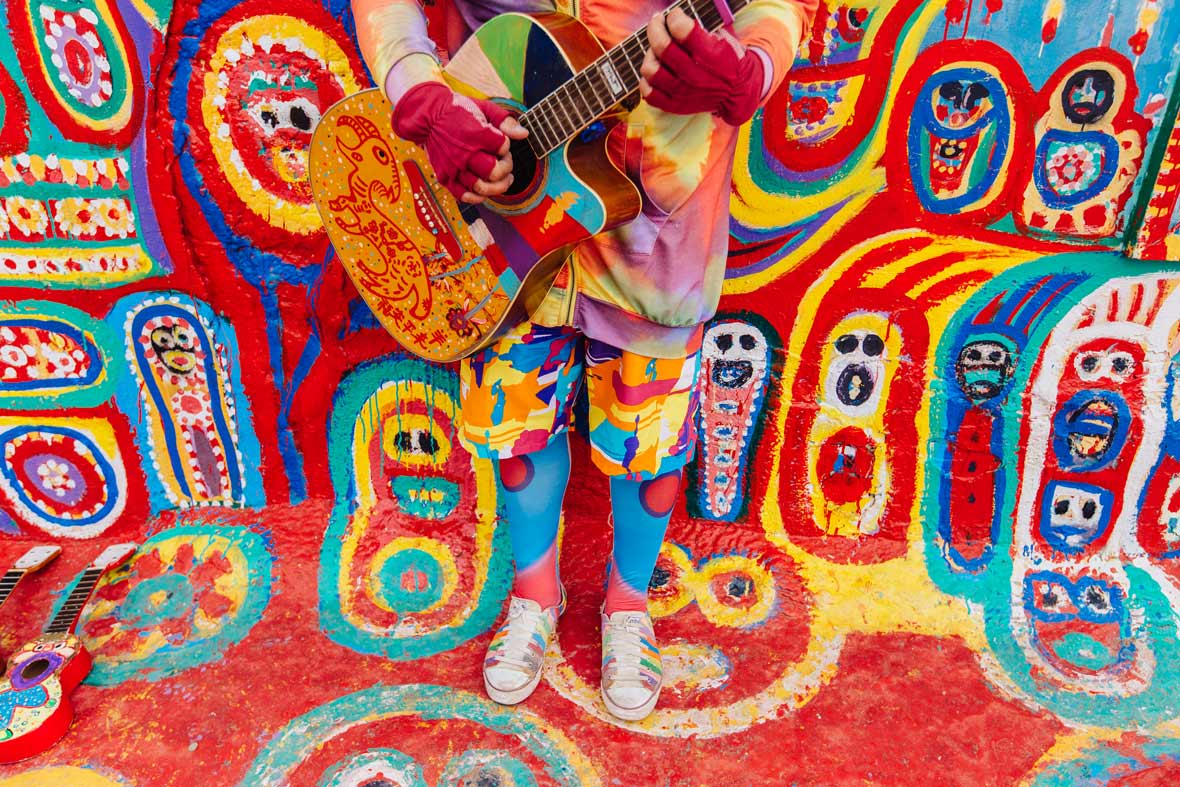 Regardless, this cultural and near-psychedelic visual experience continues to draw in countless visitors from around Taiwan as well as around the world every year. But besides tourists, the village also attracts other interesting characters. From a selfie-snapping, guitar-toting, tie-dyed Iron Man that plays renditions of popular Chinese songs to a nomadic barista selling hand drip artisanal coffee, the village seems to have a magnetic pull on creative individuals. 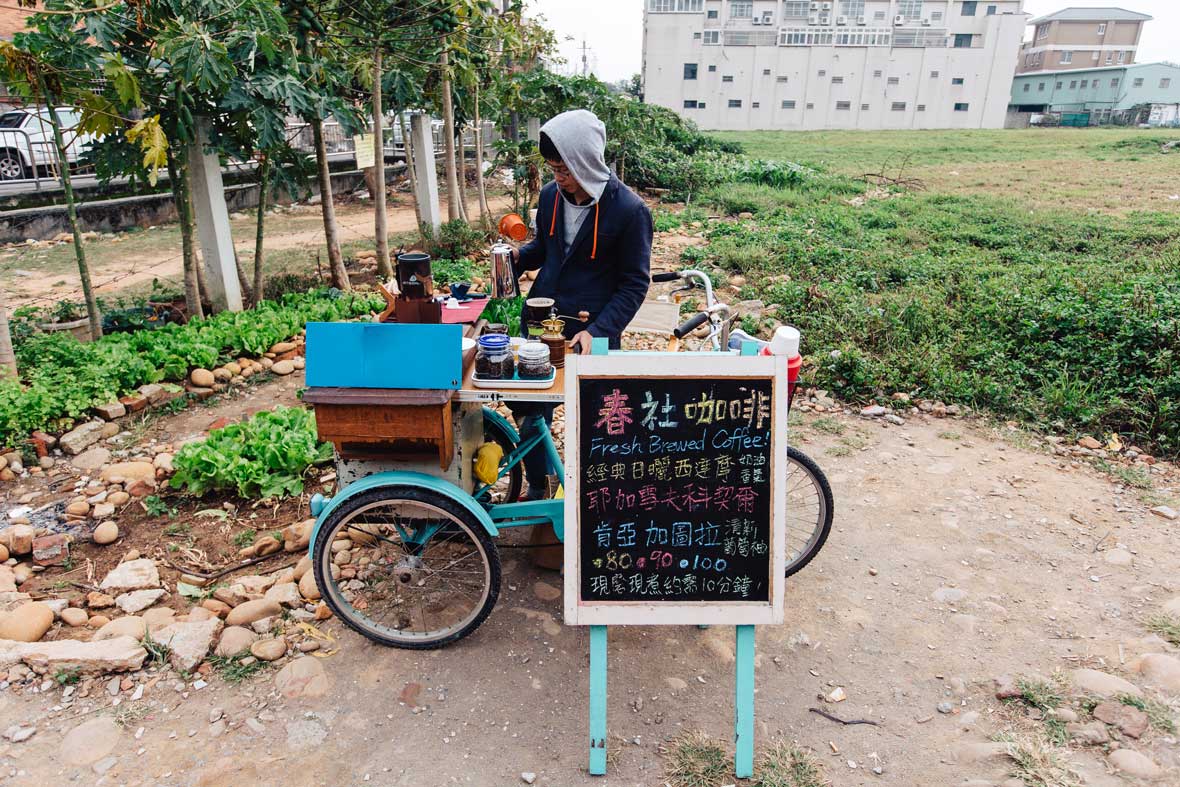 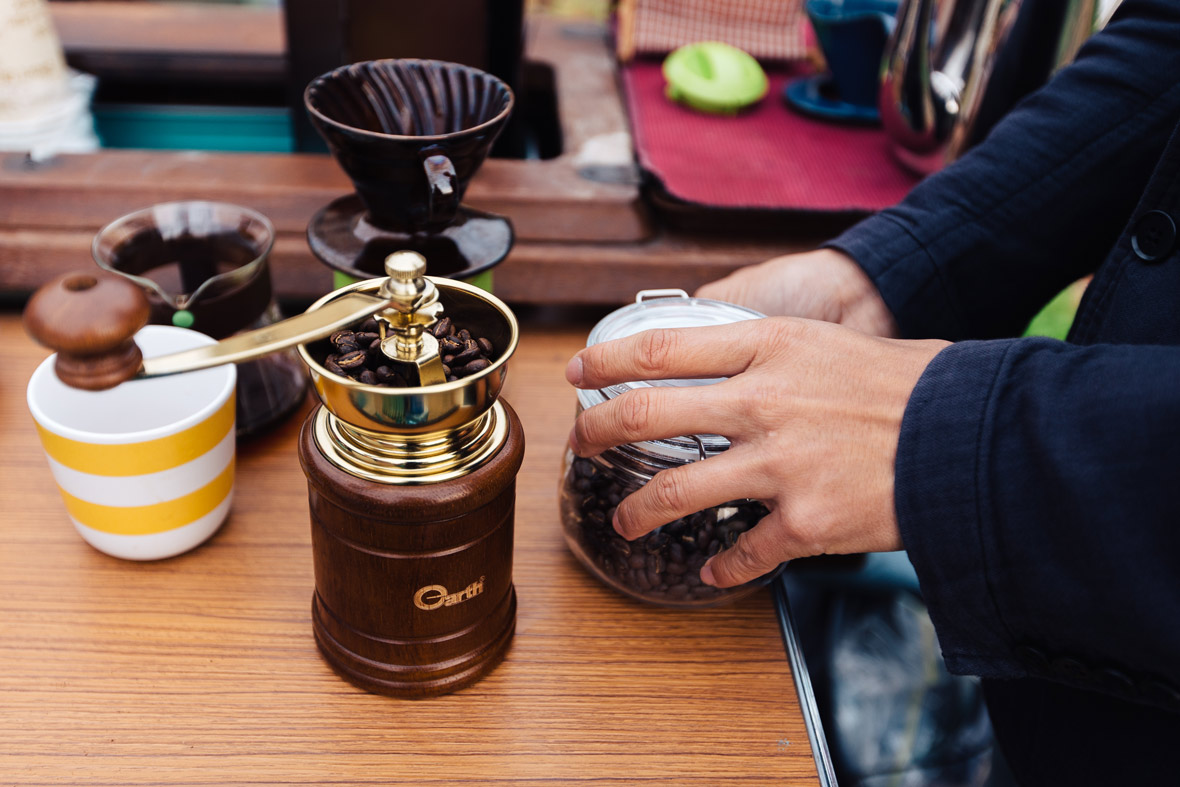 Huang Yongfu, now 94-years-old, still lives in the same house he’s been living in for the last 38 years. And despite having already preserved the village by securing its place as a cultural landwork, he still continues to tirelessly paint the village day after day. During most afternoons, Rainbow Grandpa can be found around the village, happily conversing with visitors. 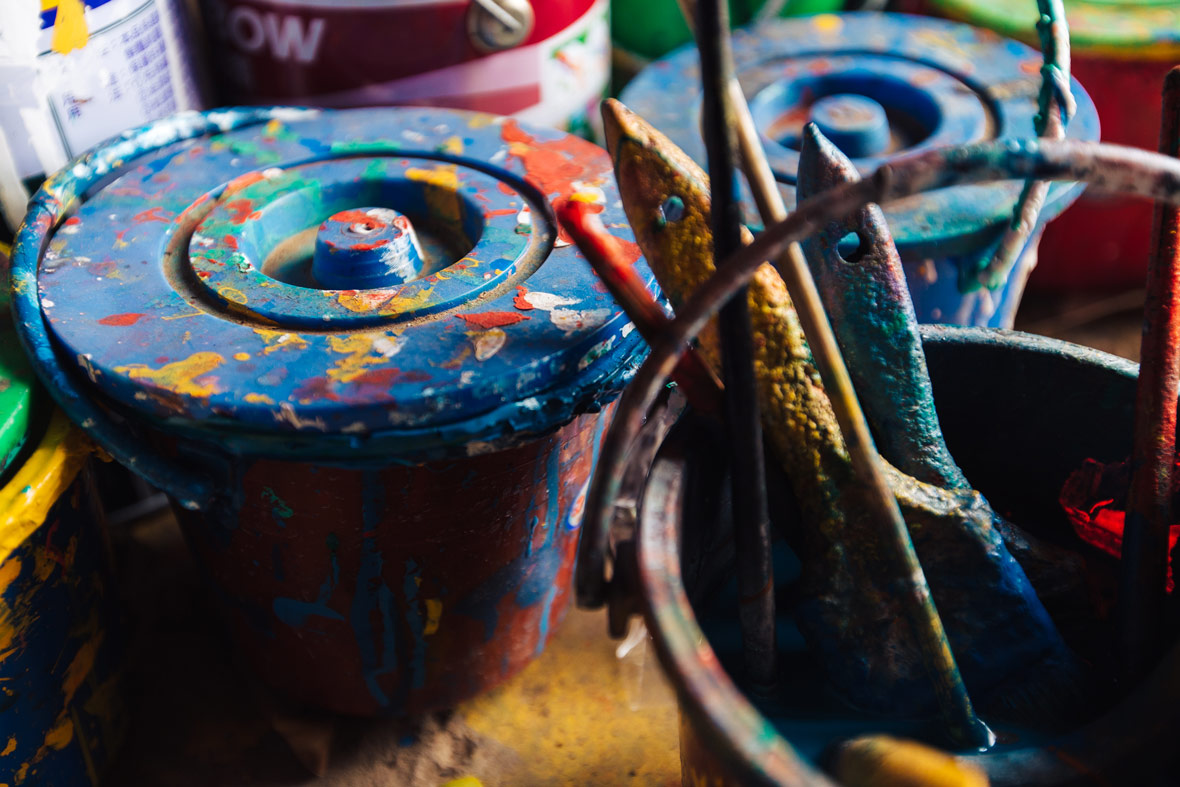