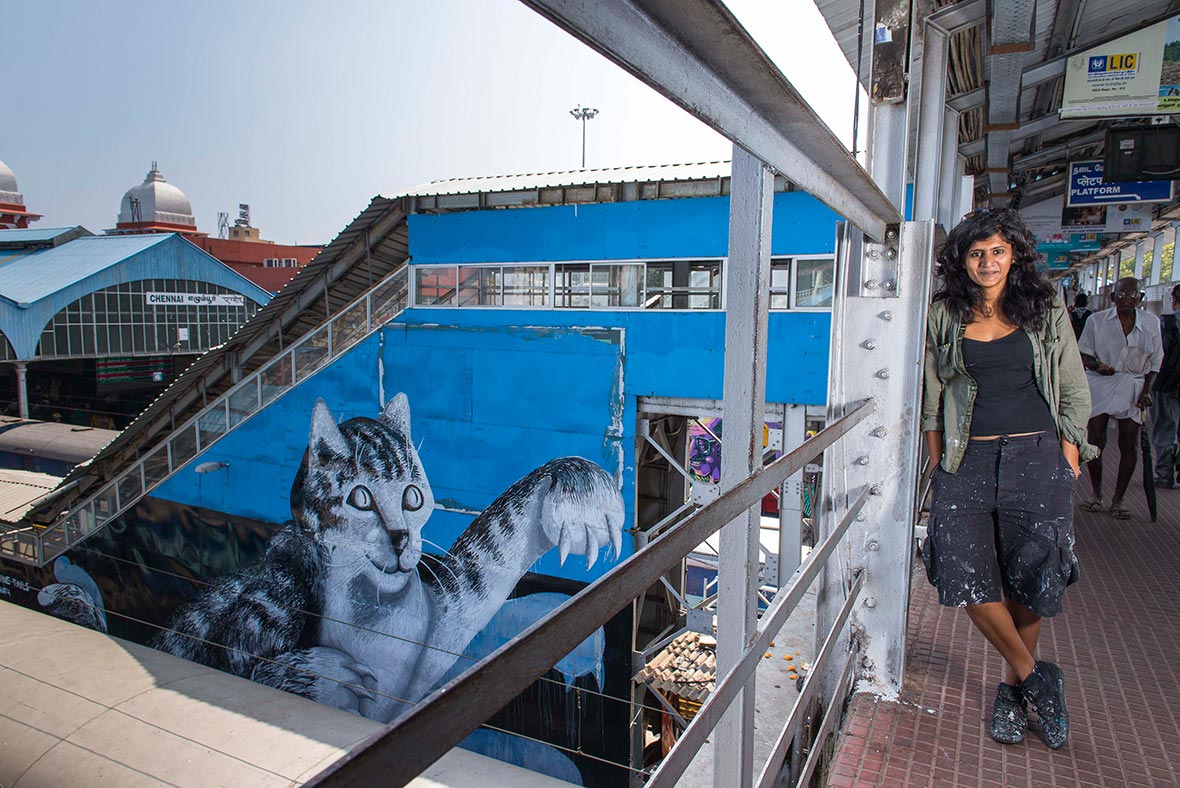 Anpu Varkey is a New Delhi-based painter and street artist. She completed her studies in Baroda, India and London, and had her first solo show in NYC in the summer of 2008. While living in Bremen, Germany, she had her first encounter with street art and started actively stencilling on the streets.

Since 2011 she has been working out of New Delhi, honing her craft by doing large murals, while also participating in and co-organizing street art festivals. In 2014 she published her first graphic novel, which takes a voyeuristic look into a day in the life of her cat. 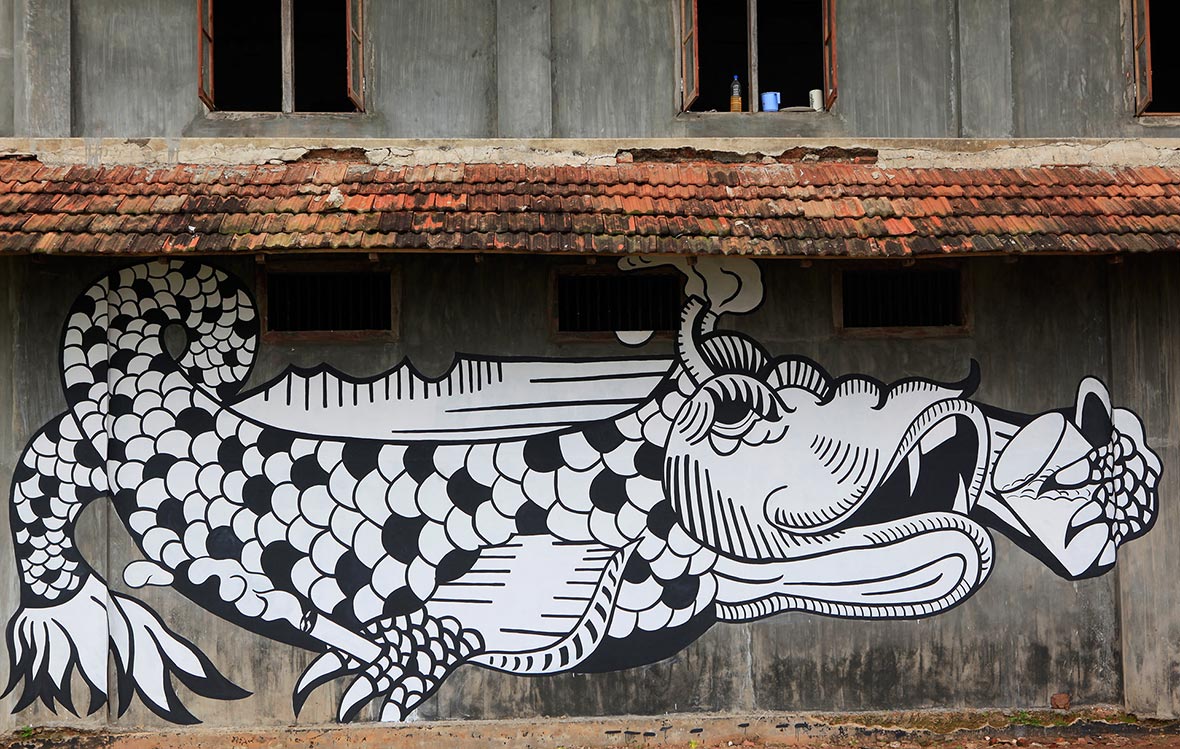 Neocha: How did you get started with street art?

Anpu Varkey: I’ve always dreamt about being an introverted studio painter, the one that has many muses. I did live that way for over a decade, where I painted avidly on large canvases. The slight detour into street art happened inadvertently. I lived in Bremen, Germany for two years, where I shared a studio with different artists, some of whom were writing actively on the streets. I was immediately drawn to their tales of love in the city, as well as how they expressed these experiences with paint. Slowly, I made my first stencils and paste ups on the streets there.

Neocha: How did street art start out in India? What’s different about street art in India in comparison to other places?

Anpu Varkey: Street art as an art form came into major Indian cities through the influx of writers from different countries coming through and leaving their mark. Sometimes they would collaborate with local writers in the city. The internet created a certain awareness about the possibilities of engaging in the street, which inspired many artists who were just starting out. But street art as a more general medium has always existed in India, as political writings on walls, cinema posters, and so on. There has always been a tradition of street painters in India, but mostly within the realm of advertisements, politics, and a certain beautification of the city which was pre-approved by the municipality. 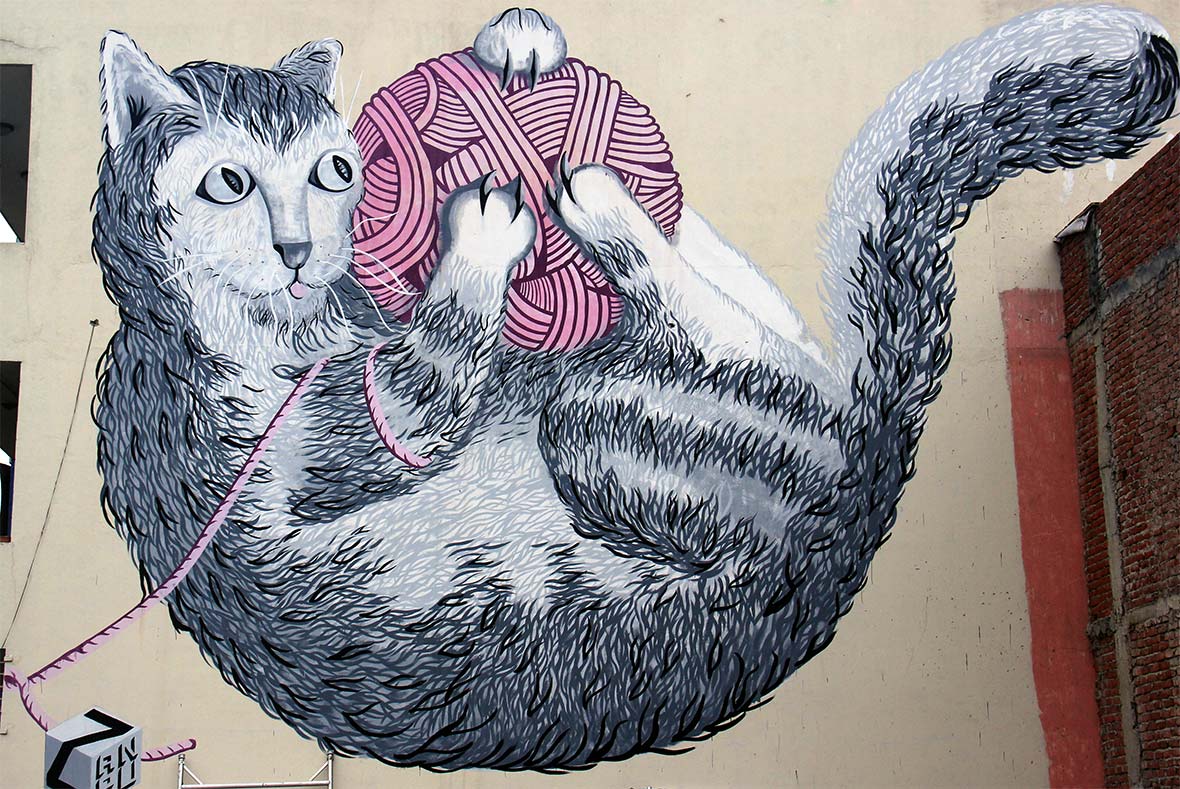 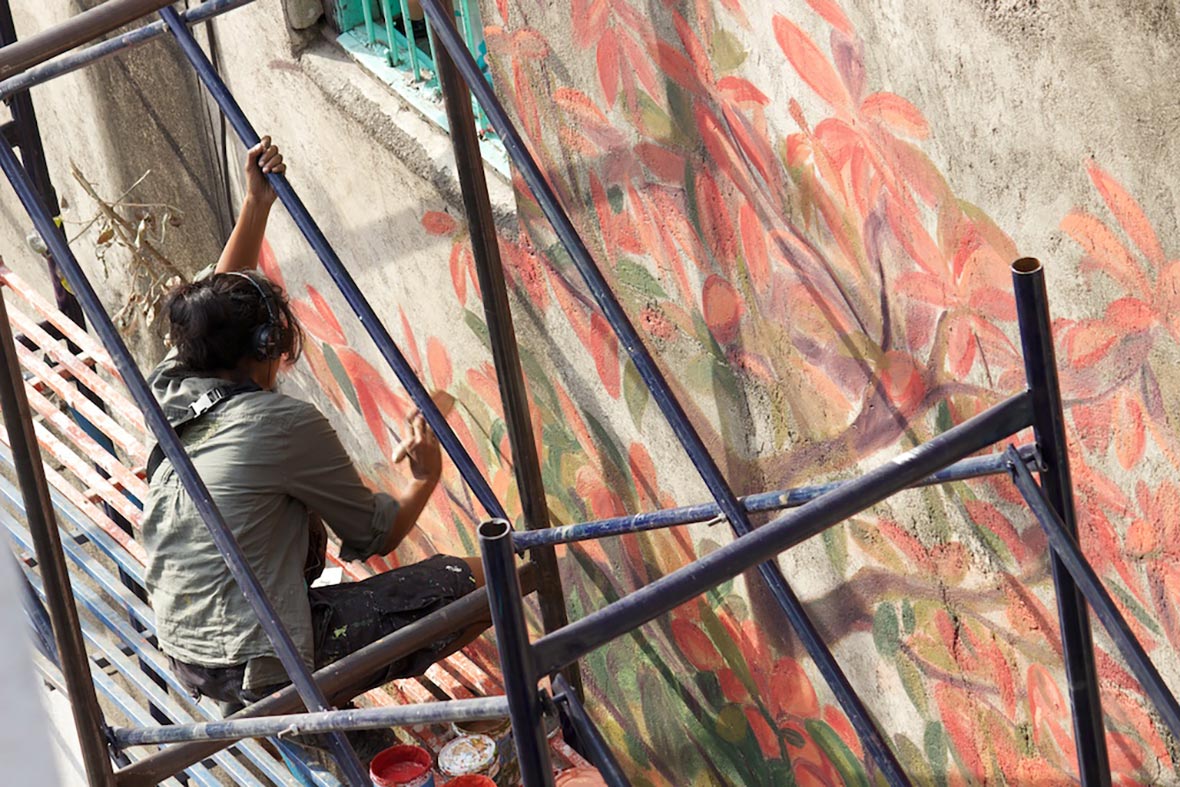 Neocha: What’s the street art scene in New Delhi like?

Anpu Varkey: I moved to Delhi four years back, and I remember seeing some interesting stencils that were mostly political. There were many writers on the scene like DAKU, YANTR, ZINE, and SAM SAM, but there wasn’t a big street art scene. I was part of Extension Khirkee, the first festival we organized in Delhi in March 2012, which was completely organic and self-funded. I guess this was a beginning for a lot of us, for making large murals within cityscapes.

Neocha: How is your studio work the same or different from the work you do on the street?

Anpu Varkey: I felt tied down with my studio process of painting, so in many ways working on the streets was liberating. I realized then that there are many ways that one can confront a space. I could create many alter egos just to work on the streets. I didn’t have to be limited to being just one person, which was how my studio work was mainly conditioned to be. The two mediums are very different, but at the same time there’s a lot of overlap. 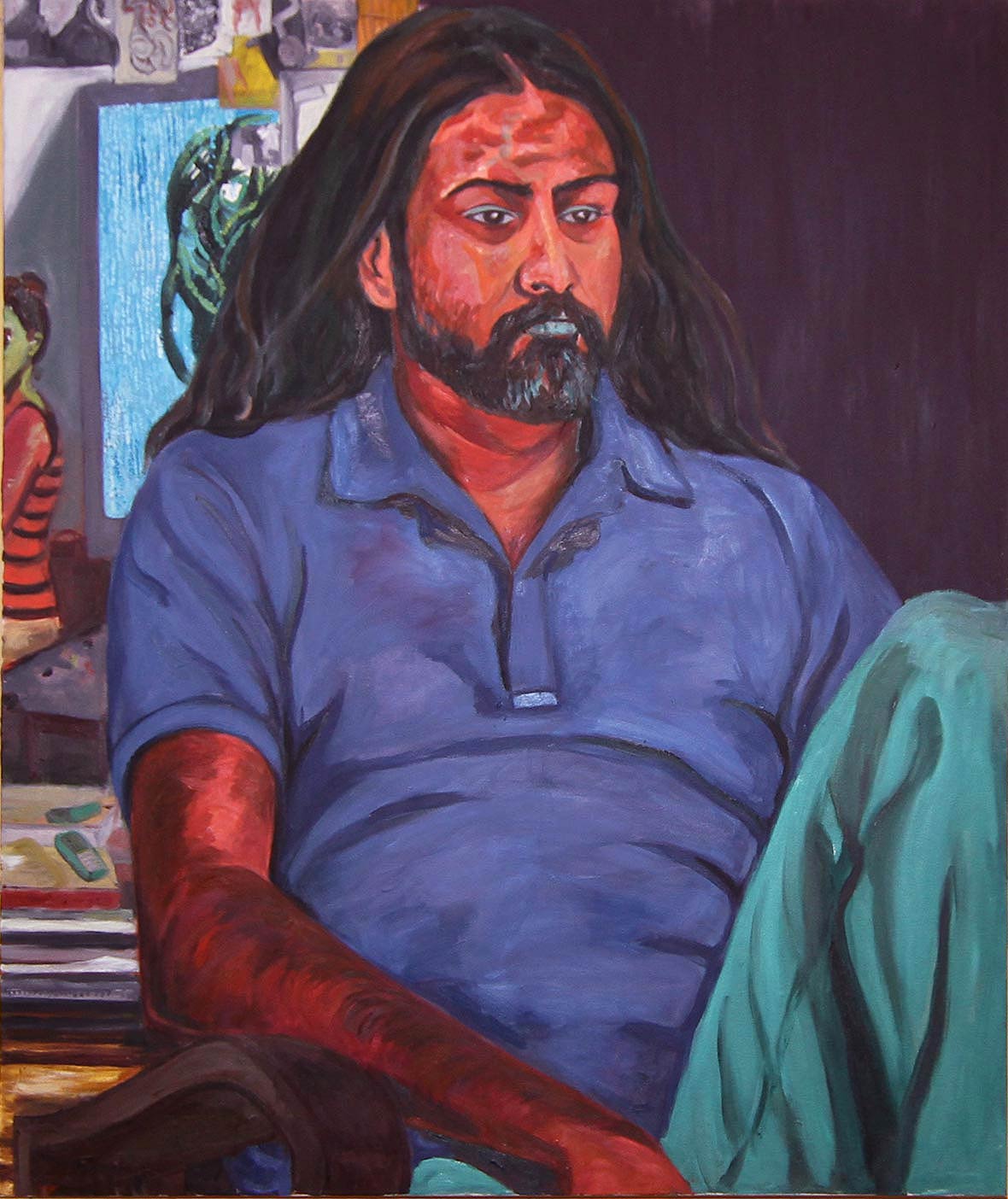 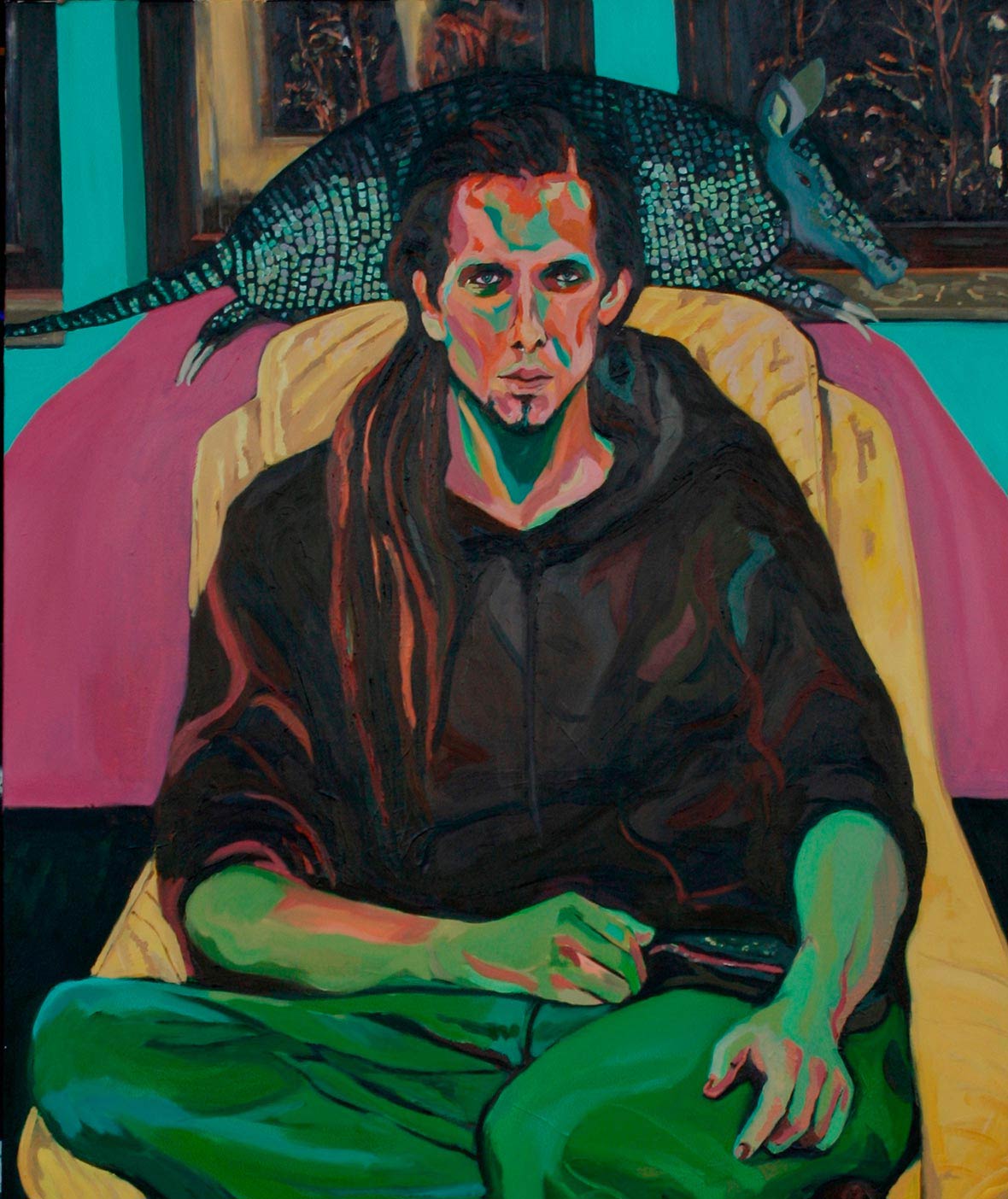 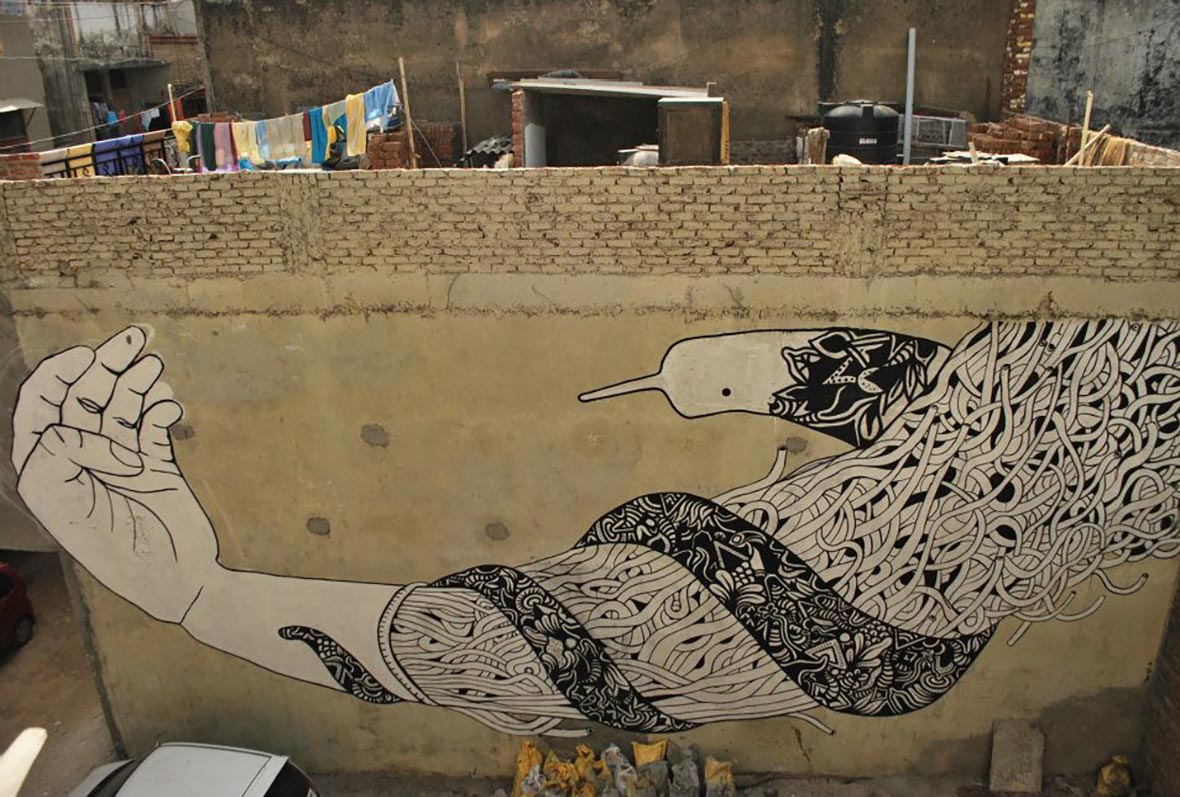 Neocha: Street art is typically viewed as a male-dominated medium. Has being a woman in street art affected your experience in any way?

Anpu Varkey: It hasn’t really affected my experience or I wouldn’t know if it has. I’ve always had different kinds of people from different life experiences come by and share their understanding of what it is they think I’m doing. I feel immune to any sort of judgement while I’m wearing my paint stained clothes. I look just like any other worker, like so many other people on the streets.