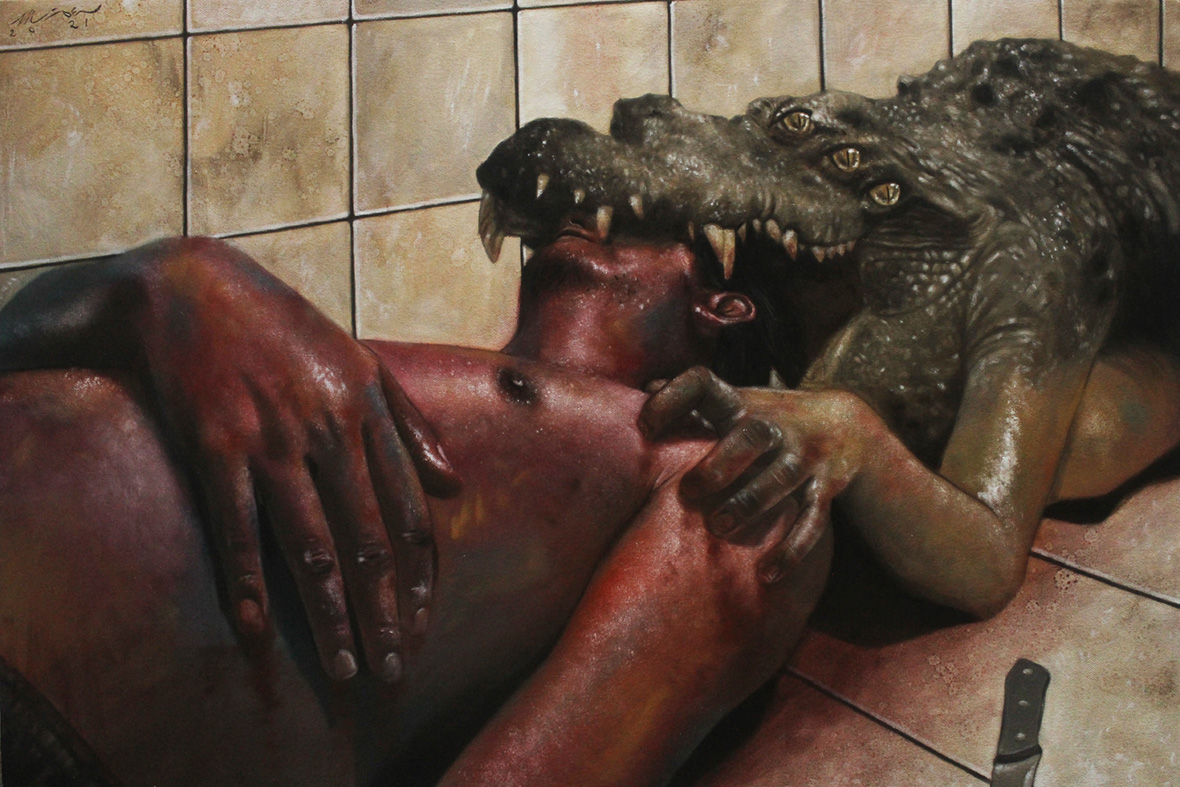 Happiness comes in many forms. In art, it may be visualized as pops of vivid colors or as warmly lit scenes conjured from an artist’s fondest memories. But in Gian Miroe’s work, none of that exists. In one painting, a three-eyed alligator is shown devouring the head of a topless man; he lies motionless on tiled floors, while a barely visible knife lays next to him. Titled Monsters Bleeding Society, this single painting encompasses the body of work the Filipino painter dabbles in: the flip side of happiness. 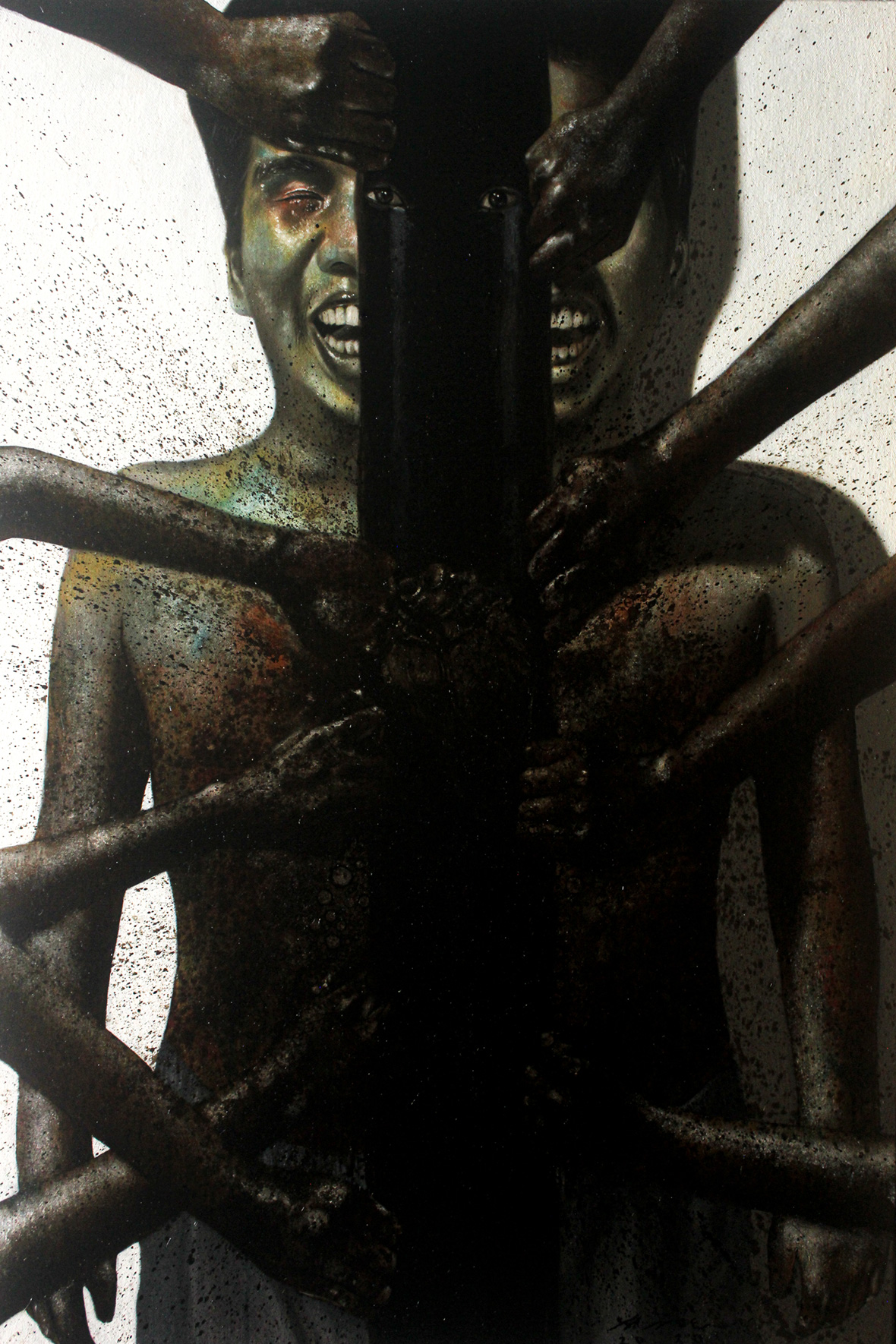 Is That the Safest Place to Hide? 《你躲在这儿真的安全吗？》 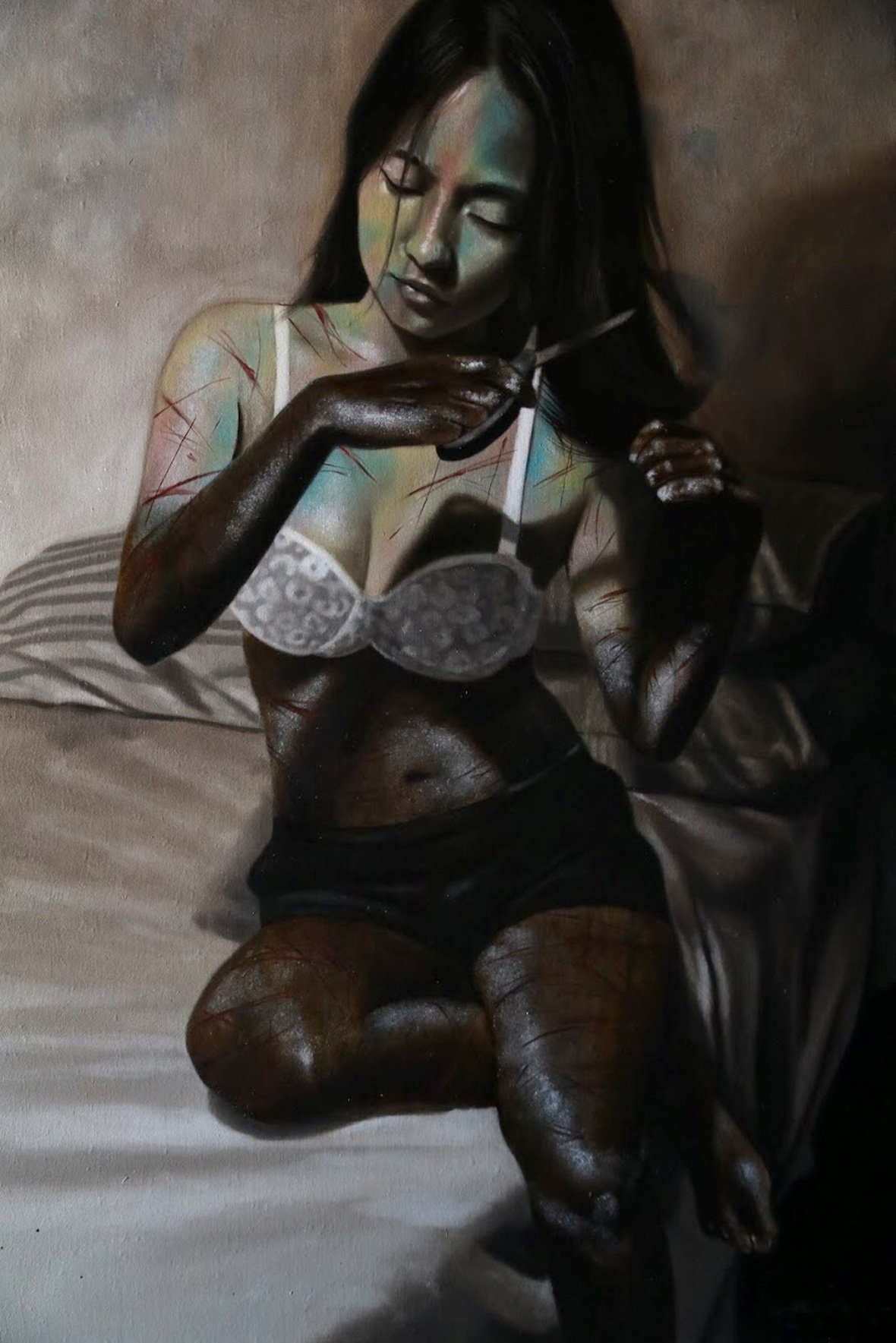 Whenever It Feels Right 《感觉对的时刻》

Growing up, Miroe has always had a penchant for art. During university, he majored in advertising at Technological University of the Philippines, but in his junior year, he decided he wanted to pursue art as a career instead and joined an art club, leaving advertising as a back-up plan. When his art club hosted an open-theme competition for students, he was encouraged by other club members to join. Miroe was convinced to sign up, and his painting featuring a woman with ram horns won him a cash prize and painting supplies.

He also caught the attention of Filipino artist Lynyrd Paras, who attended the competition as an audience member. They talked after the competition, finding they had a lot in common, and Paras took in Miroe as an apprentice from 2013 to 2017. During his apprenticeship, Miroe began to transition from brighter tones to darker, subdued shades, which he saw as more fitting to capture the sinful pleasures of mankind—a topic he was fascinated by. 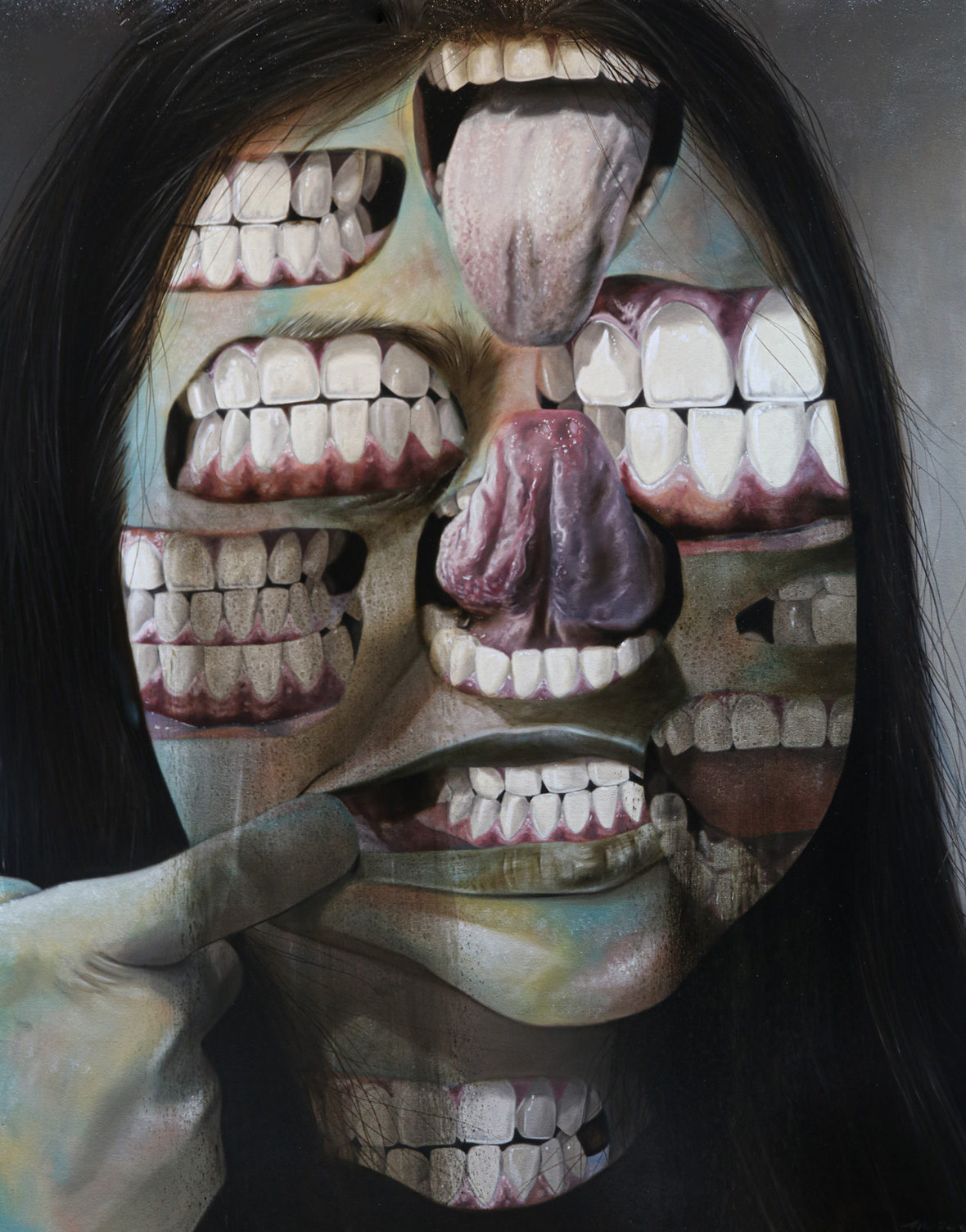 So Many Teeth Made for Lies Work 《满齿谎言》 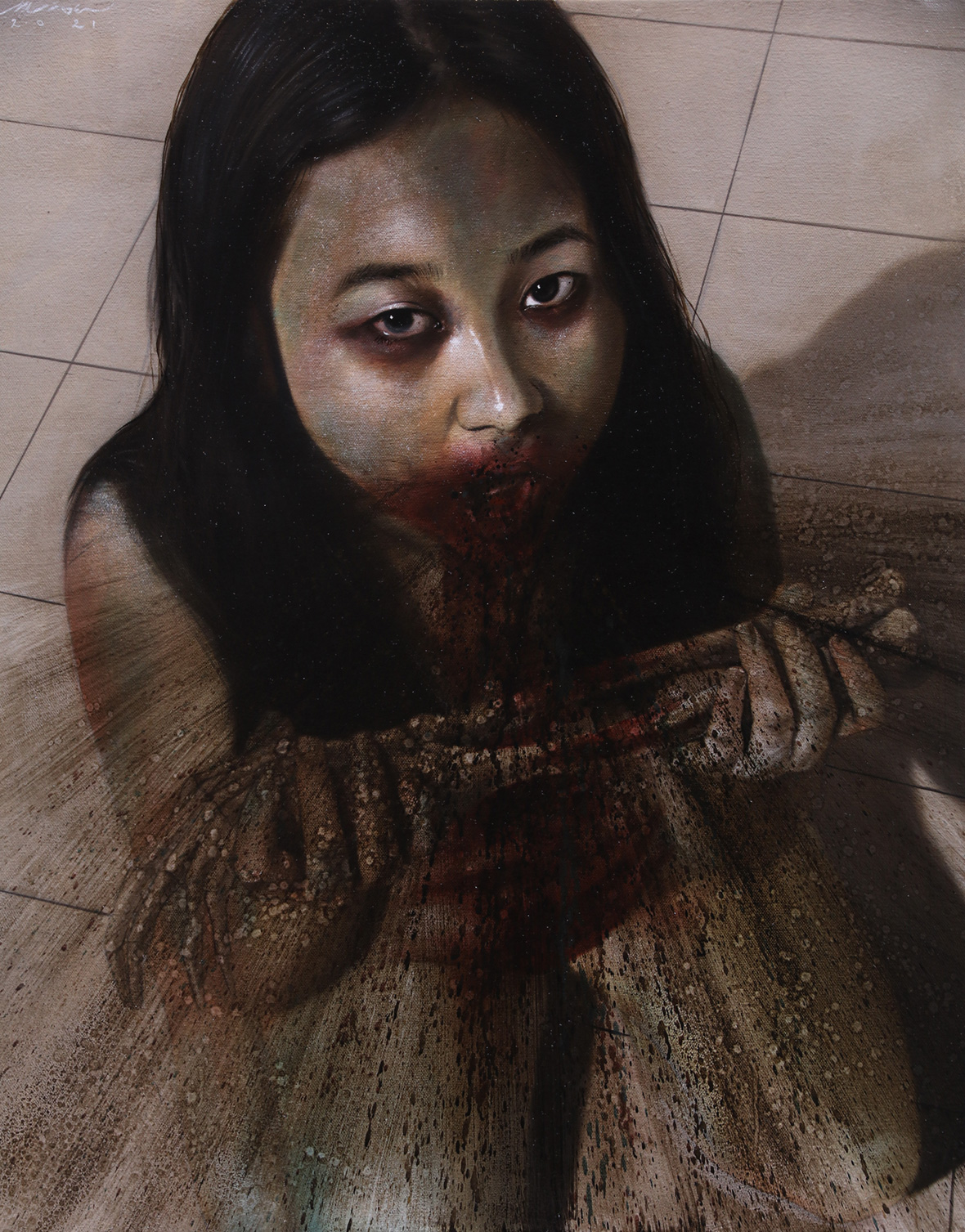 With these moody palettes, the themes that Miroe painted also began to shift as he began examining the dark side of humanity. In So Many Teeth Made for Lies Work, mouths bearing gritted teeth or with stuck-out tongues have entirely replaced the facial features of a female figure.  Instead of eyes, a nose, ears, or collar bones, everything is just teeth and tongues. “It’s about people who preach and teach, but don’t walk the talk and just spew out lies,” he explains. “Every time they open their mouth, you can expect that they’ll speak ill of something or someone. People like this exist and what’s worse is that we’re surrounded by them.”

Apart from scathing commentary, Miroe also touches on difficult emotions, such as is the case with Sentimental Value. A woman in frame is chewing on a skeletal arm while kneeling on the tiled floor. As she looks up to the viewer, blood drips from her mouth and onto her body. Her almond eyes glisten from unshed tears and eye bags make her look exhausted. “We know people who have lost a valuable thing, person, or event in their life, but here, it depicts how we cling to that loss, so much that we try to imagine as if they were still here,” he explains. “Even if they came back, we would never receive its entirety, but just a part of it: perhaps a memory, a longing, or a quarter of what it had been.” 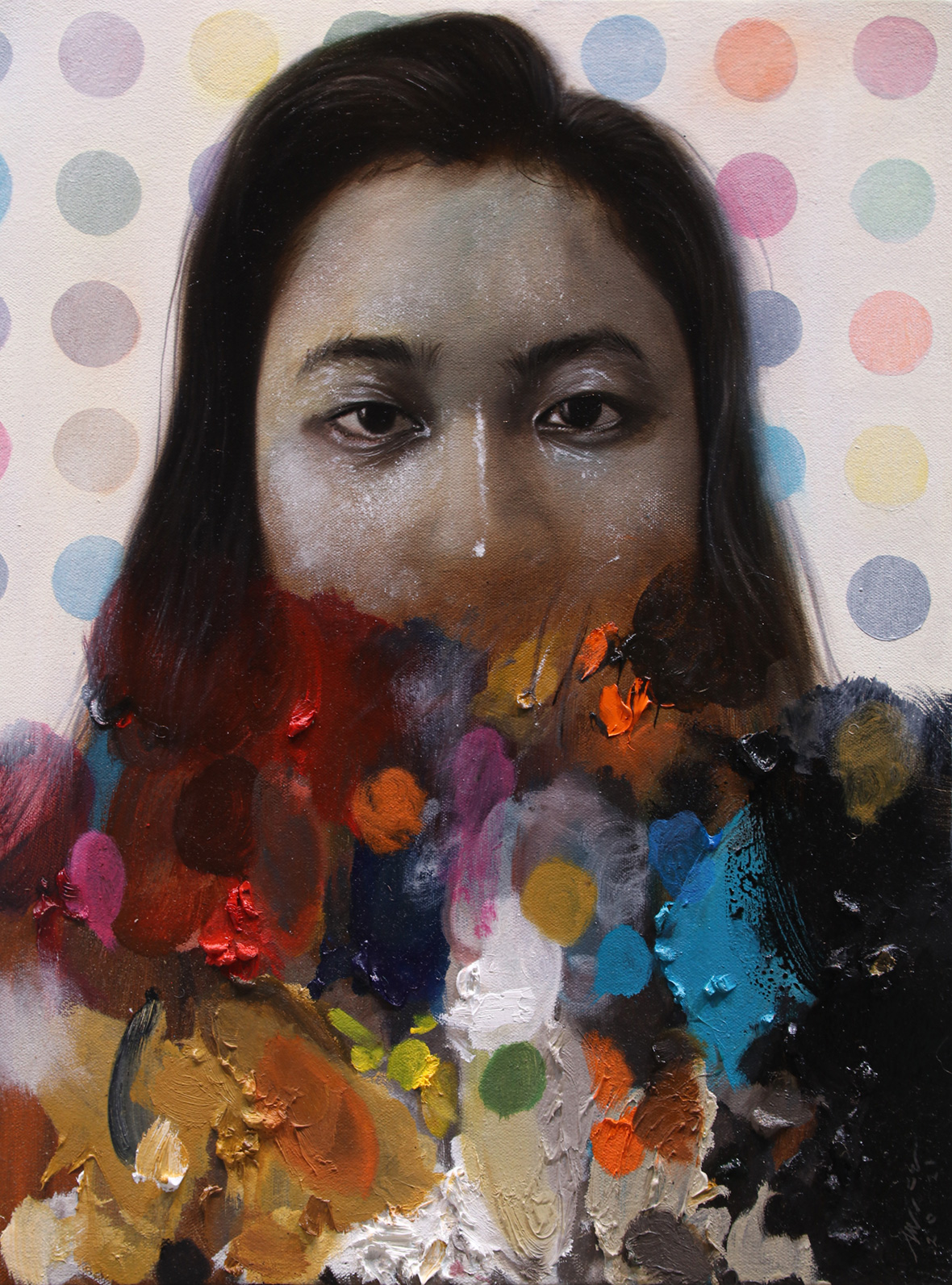 In Feel Me, Fill Me, neatly arranged polka dots painted in colorful pastels fill a white background; in the foreground, a woman with desaturated skin gazes at the viewer with fatigue. The bottom half of her face is unpainted, replaced with uneven smudges of red, orange, pink, white, cream, brown, blue, black, yellow, and green. It’s almost as if the lower part of the canvas itself was used as the palette on which he mixed his colors. “It’s a depiction of how people are never content,” Miroe says. “In this painting, the woman keeps looking for something more, even though she already has everything she wished for, to the point that she has become so worn out and neglects other things in her life.” 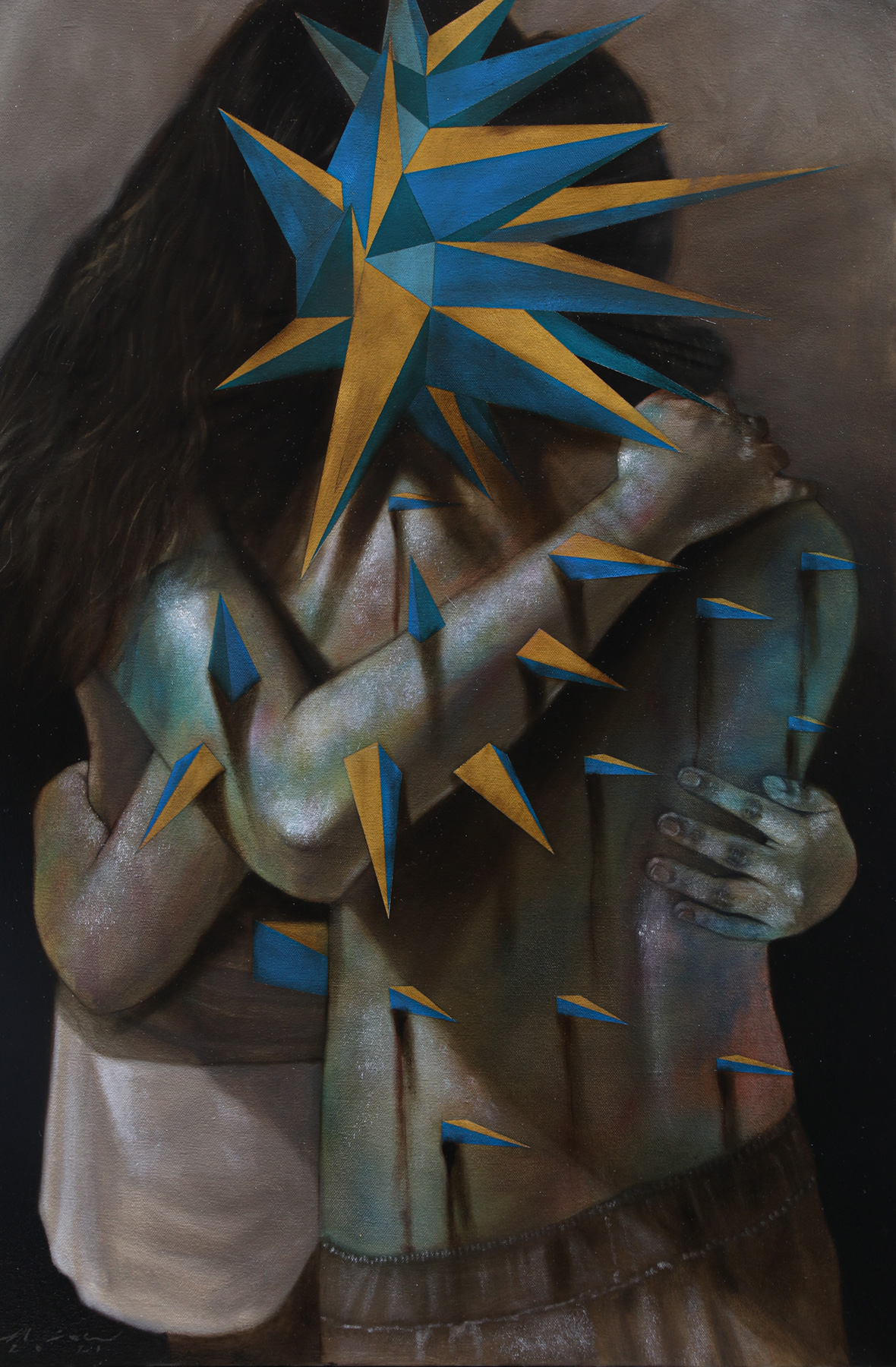 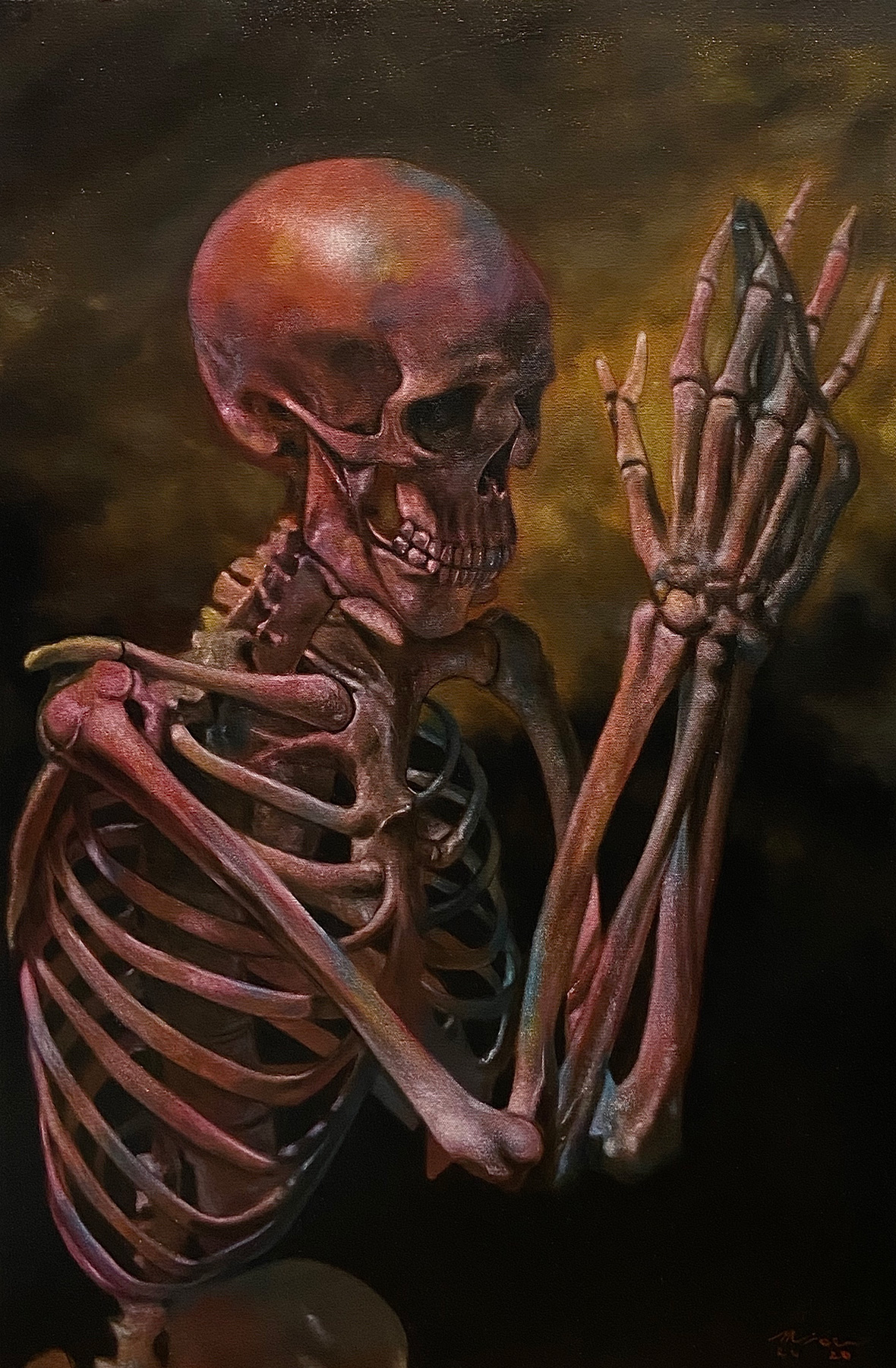 A Prayer For Your Brighter Tomorrow 《美好明天的祈祷者》

First impressions and outer appearances are a core theme throughout Miroe’s art. “Most of the time, people base their judgment not on personality, but on people’s looks. It’s only when we get to know these people that we can conclude whether our first impressions are spot on or they just distort our perception. Whatever the situation may be, everyone has their ugly side. While in some people you can see it right off the bat, others may take a while before they reveal that side of them and you can see who they are.”

His paintings are often titled as questions, such as Is That a Safe Place to Hide? and What’s Your Purpose? These titles allude to the underlying themes of each piece, which are based on his observations of a reality that’s far from rosy. As such, negativity runs rampant in his work. All seven cardinal sins have also appeared within his work, though this isn’t a theme that he’s consciously looking to broach. It just so happens that these different forms of immortality all shape his understanding of the world, a drastic change from his younger years when he held a happy-go-lucky outlook. 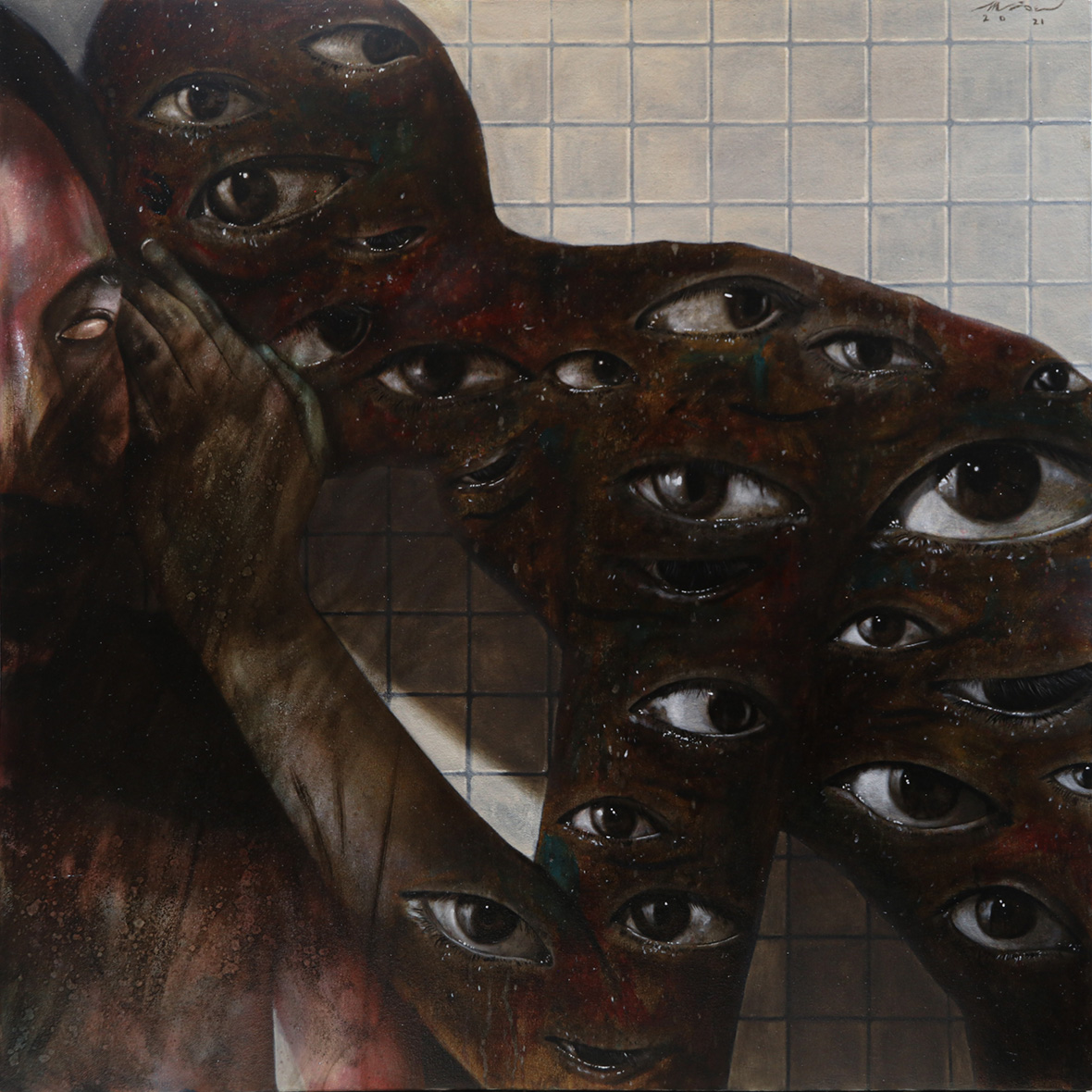 So Many Eyes Made for Blind Work 《盲目》

As he got older, he began paying attention to what was happening right before his eyes: crime, poverty, and one’s disillusion over what happiness means. “My paintings aim to expose the pain behind happiness, which is a never-ending process. This is why I’ve told myself that art is dangerous,” he says. For Miroe, it seems impossible to feel and be happy at all times. Through his body of work, he shows how happiness can be a form of escapism, but this can also disconnect people from reality, which may cause more harm than help. On the other hand, when art isn’t afraid of pointing out the wounds and hurts of reality, it can help viewers reflect and pluck up the courage to overcome the pain and disappointments they may encounter in life.