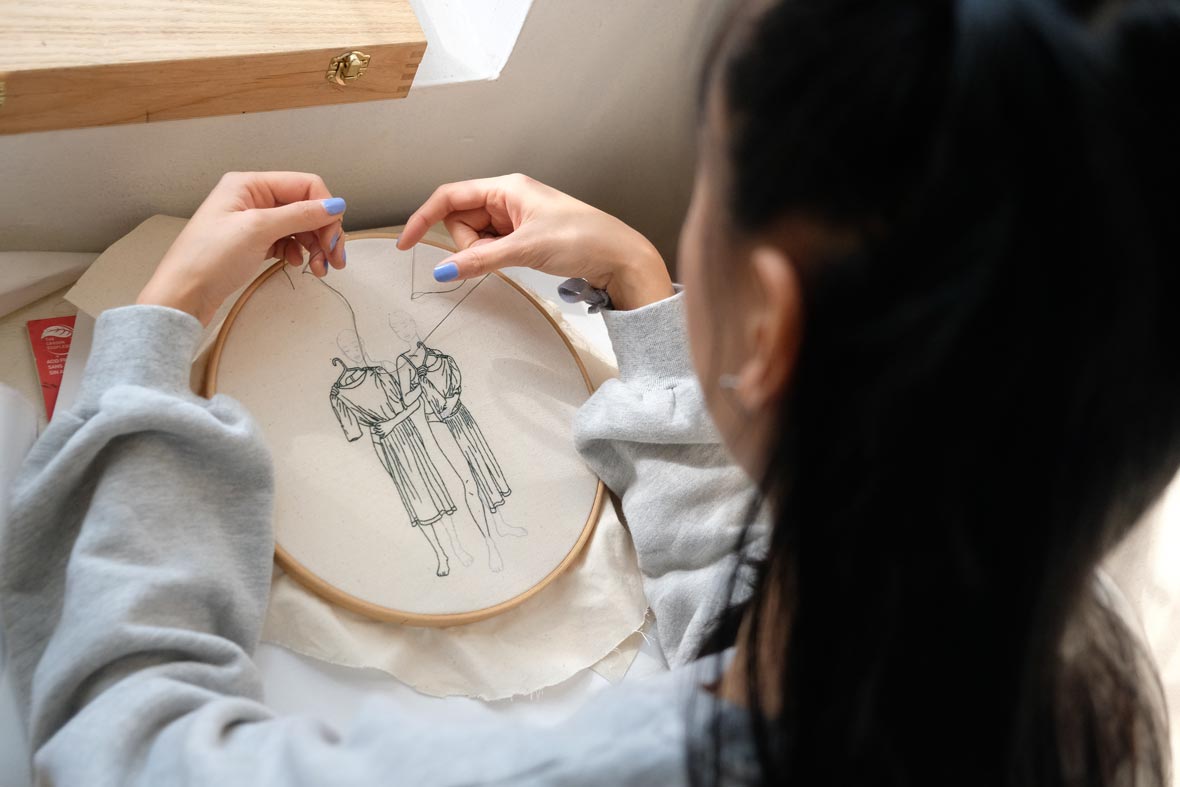 Best known as the Malaysian winner of the second season of Asia’s Next Top Model who now walks runways around the world, Sheena Liam has also crafted a name for herself as an embroidery artist. Her delicate, minimalist art is sewn through with images of freedom and self-care.

She first picked up needlework from her mother in childhood, but only later on in her modeling career did she revisit the old-fashioned craft. It started out as a peaceful, expressive activity to keep herself occupied during downtime between jobs, but she slowly began taking it more seriously, and before she knew it she’d made a series. 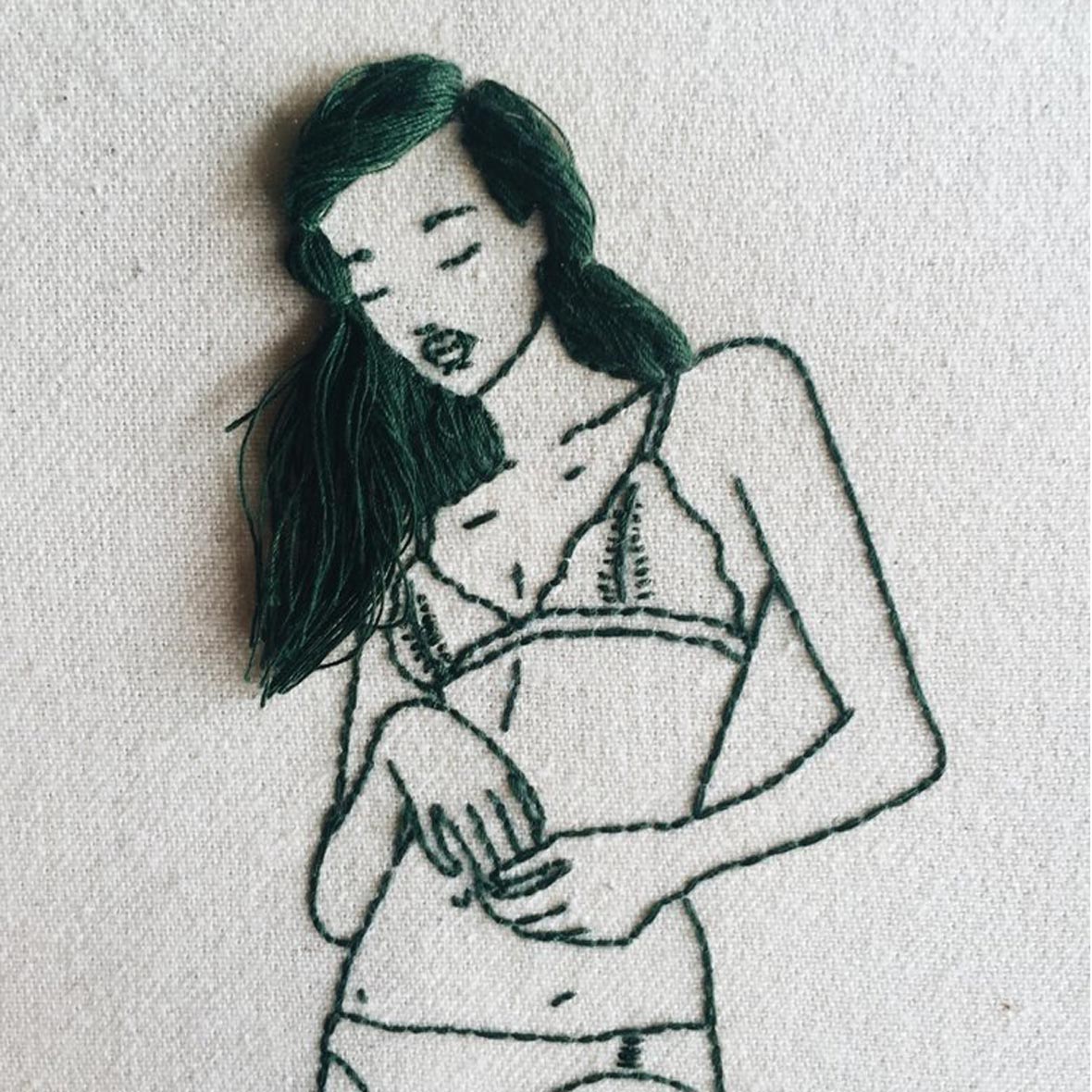 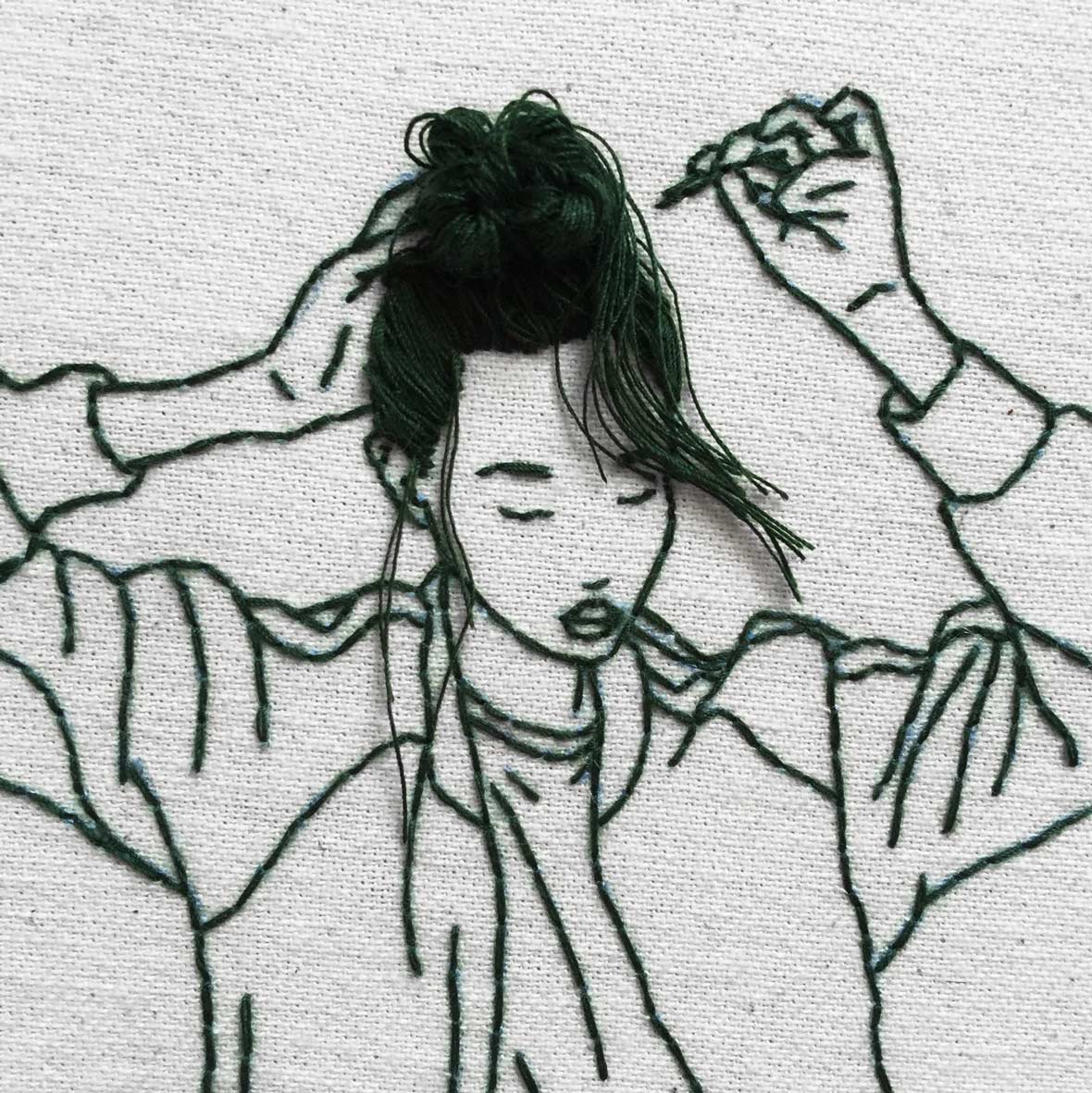 “I was never really drawn to it as a practice until I started seeing all these other artists breaking boundaries with embroidered work, and I realized we weren’t bound to tradition and stagnant designs,” Liam says. Like the carefree movement of the hair detail, each piece is open to interpretation. “I’m not pushing any agenda on anyone.” 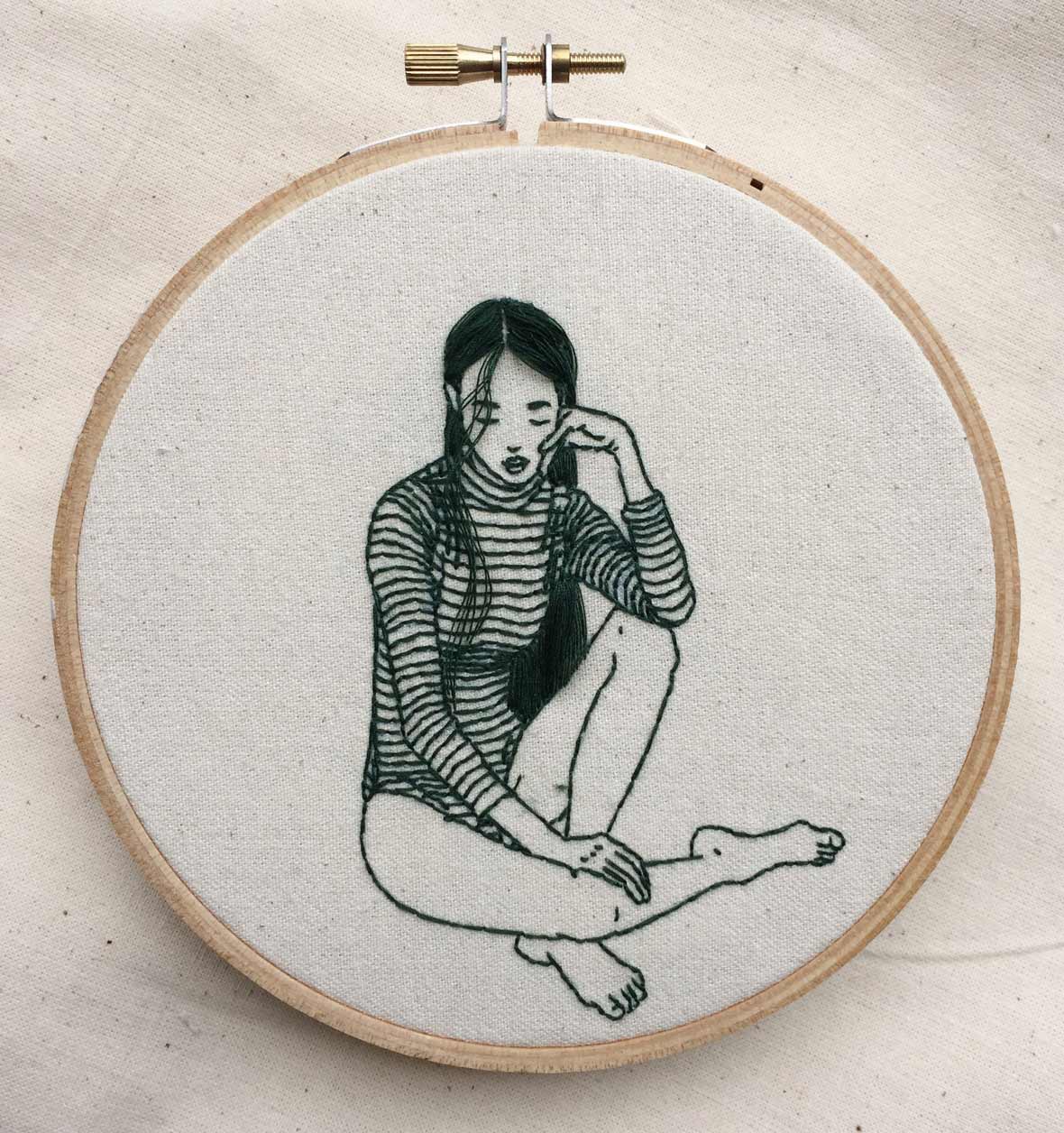 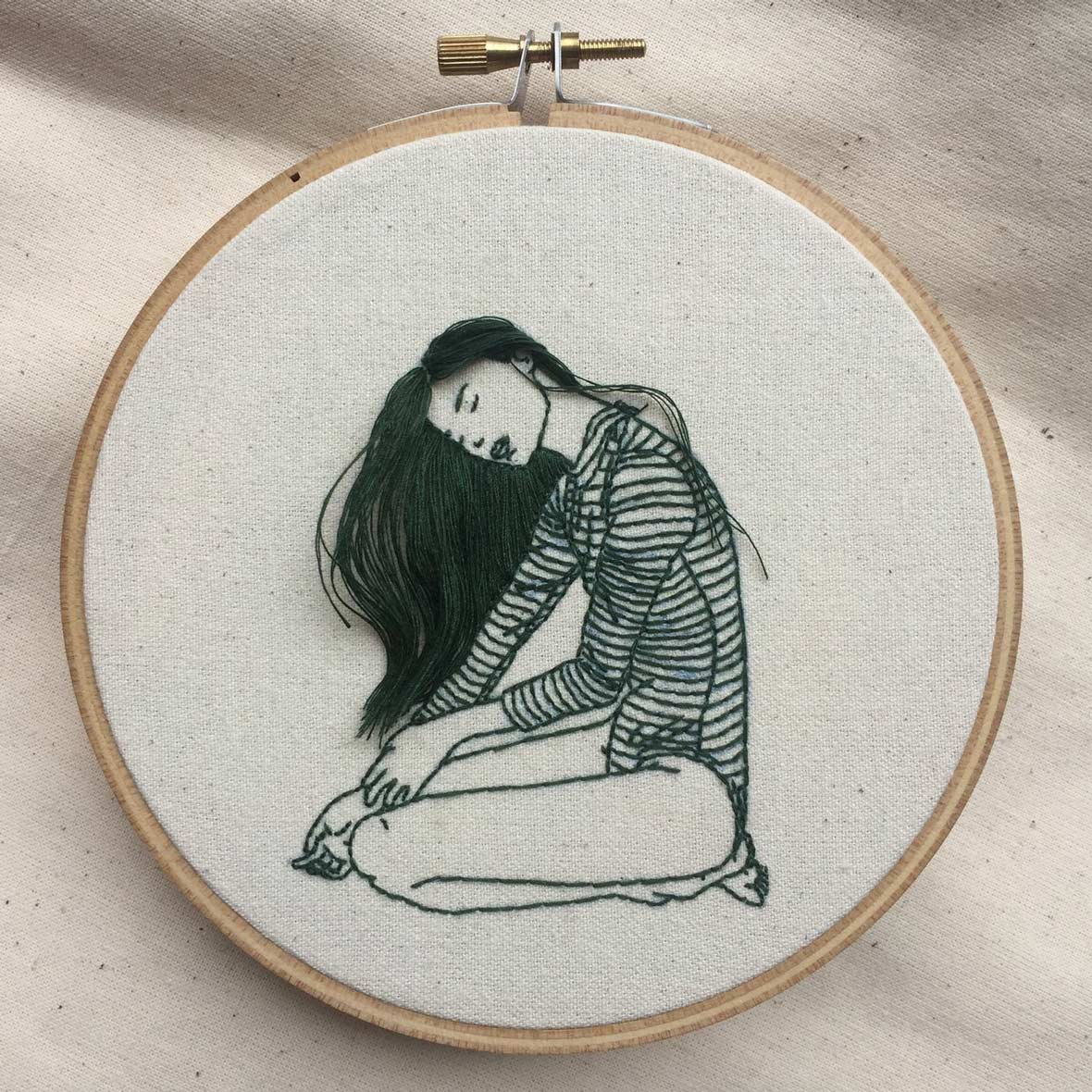 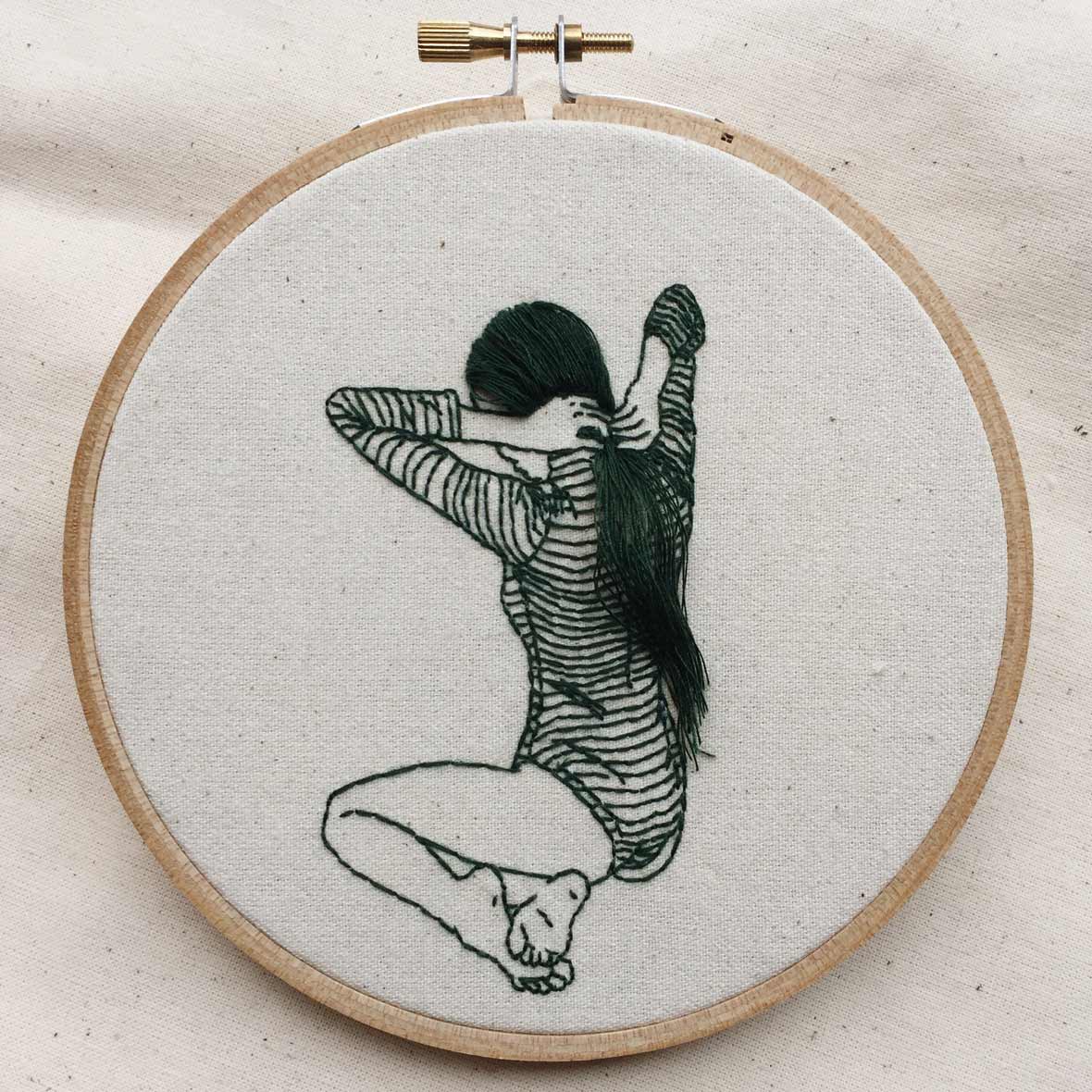 The figures in her works are often based on Liam herself, stitched with dark-green thread that stands out against the off-white linen. They can take anywhere from four days to a month to complete, depending on their size and complexity. “Sometimes I’m doing something completely new, so it takes some trial and error before I have a finished product I’m okay with,” she explains. 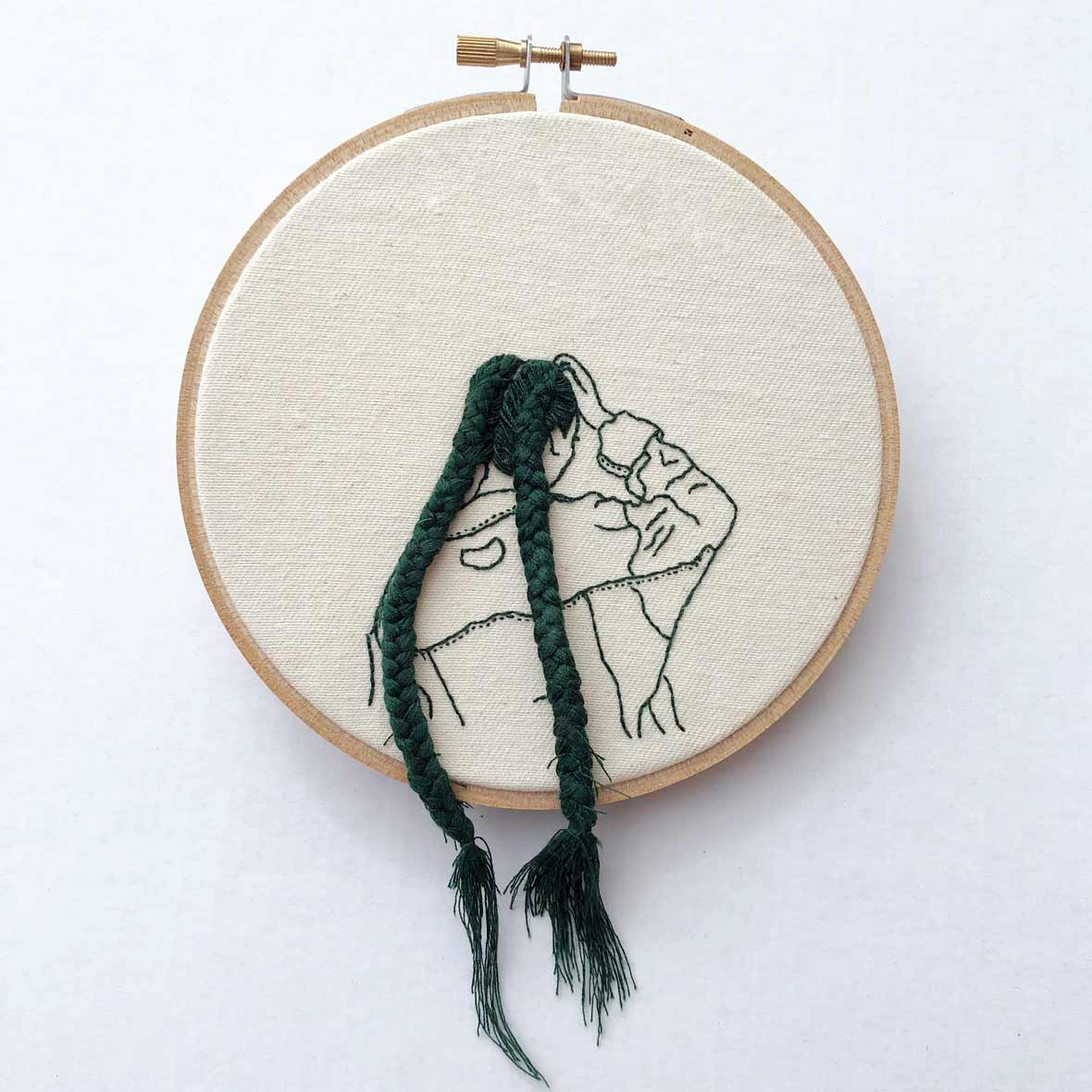 Each piece explores a moment in a woman’s life, from simple daily routines, like changing clothes or getting ready for a girl’s night out, to subtle moments of empowerment, like independently braiding or cutting off one’s hair for the first time. Just as she does in her modeling, her figures convey a mood or feeling through posture and pose. The free-flowing hair adds a gentle movement to contrast with the static figure, making the whole piece come alive. Though the style is minimalist, the figures are rich in detail.

“The actual embroidering is my favorite part of the process, so I try to prolong it by adding as much detail as possible,” she says. “The hair can be frustrating because I don’t have a set formula or technique. Every piece is different, and sometimes at the hair stage, which I usually do last, I might ruin a piece I’ve spent hours on.” 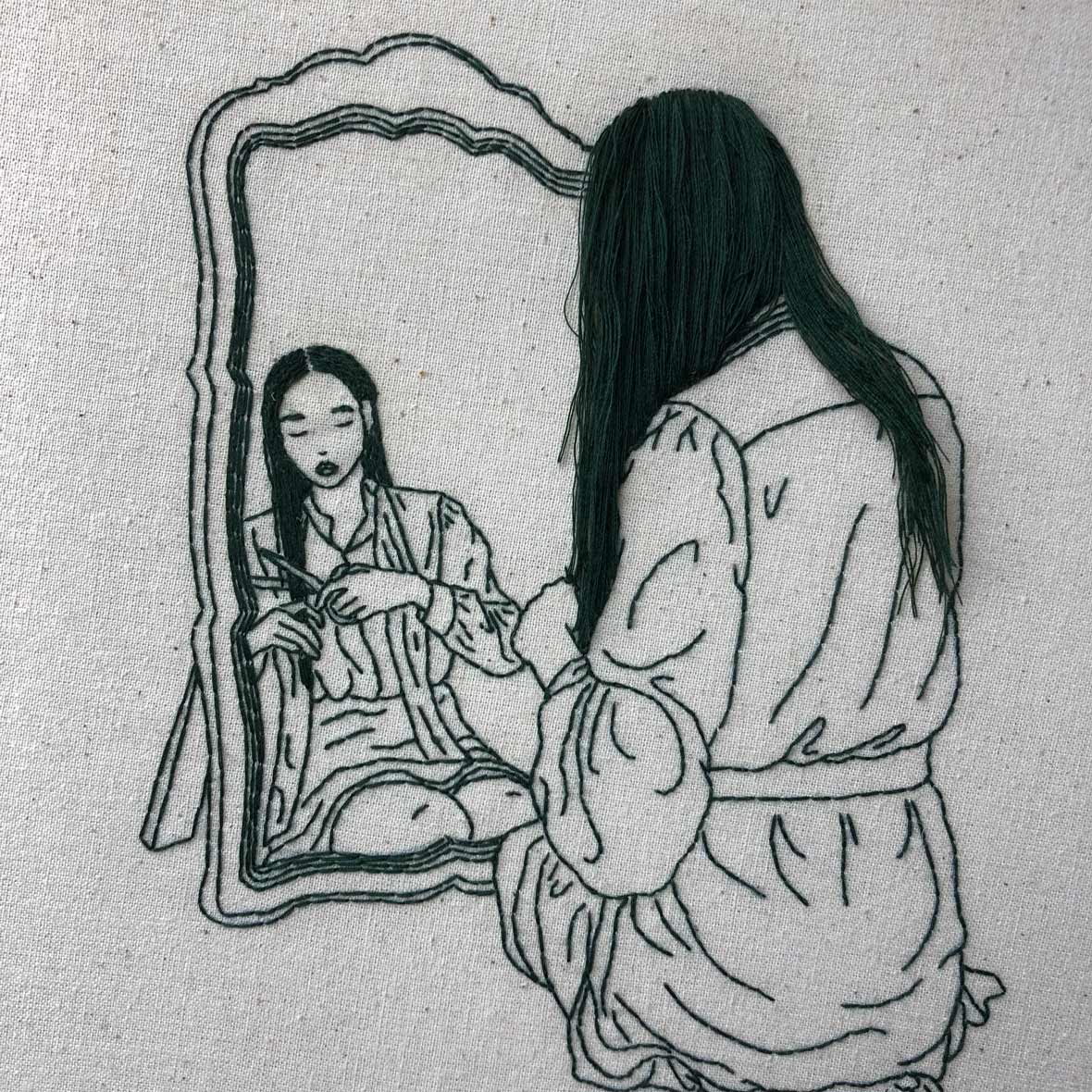 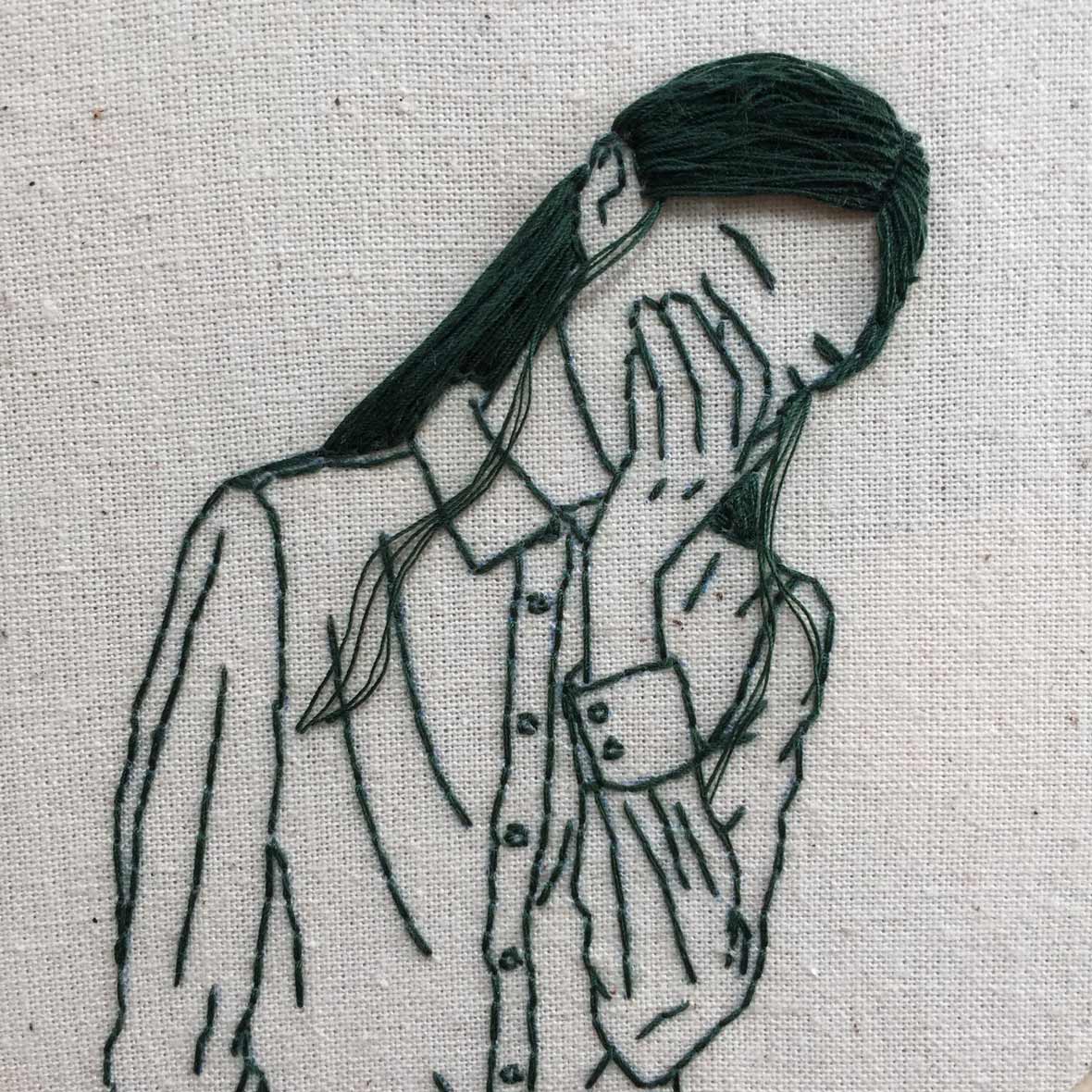 Inspiration comes from anything: a song, a general mood, or even a feeling. Liam compiles images from the internet onto her mini mood board and has even sought inspiration in life drawing classes. “You get to explore other different types of bodies and poses through the models,” she explains.

As someone who’s made a career out of being someone else’s canvas, here she has the freedom to express her own creativity.

In April 2017, Liam decided to share her work on Instagram under the handle @times.new.romance, a play on the name of the popular font. The handle suggests a romantic feeling of viewing peaceful modern moments fleeting by, in keeping with her art—but perhaps this writer has put too much thought into it. “I just thought it was a nice name for an account,” Liam says. The account eventually gained widespread attention from media, art-lovers, and fans, leading to her first solo exhibition, a milestone in any artist’s career.

In October, the embroidery works were presented at Item Gallery in Paris in a show also titled Times New Romance. As it happens, Liam dismissed the idea of a solo show when she was first approached about it. “I didn’t think too much of my embroidery to start with,” she says. “Honestly, it was a lot of people putting a huge amount of faith in me from the start that propelled me to work on a body of cohesive work. I had collectors and other artists who took care of me, so I could work in the capacity that I did.” 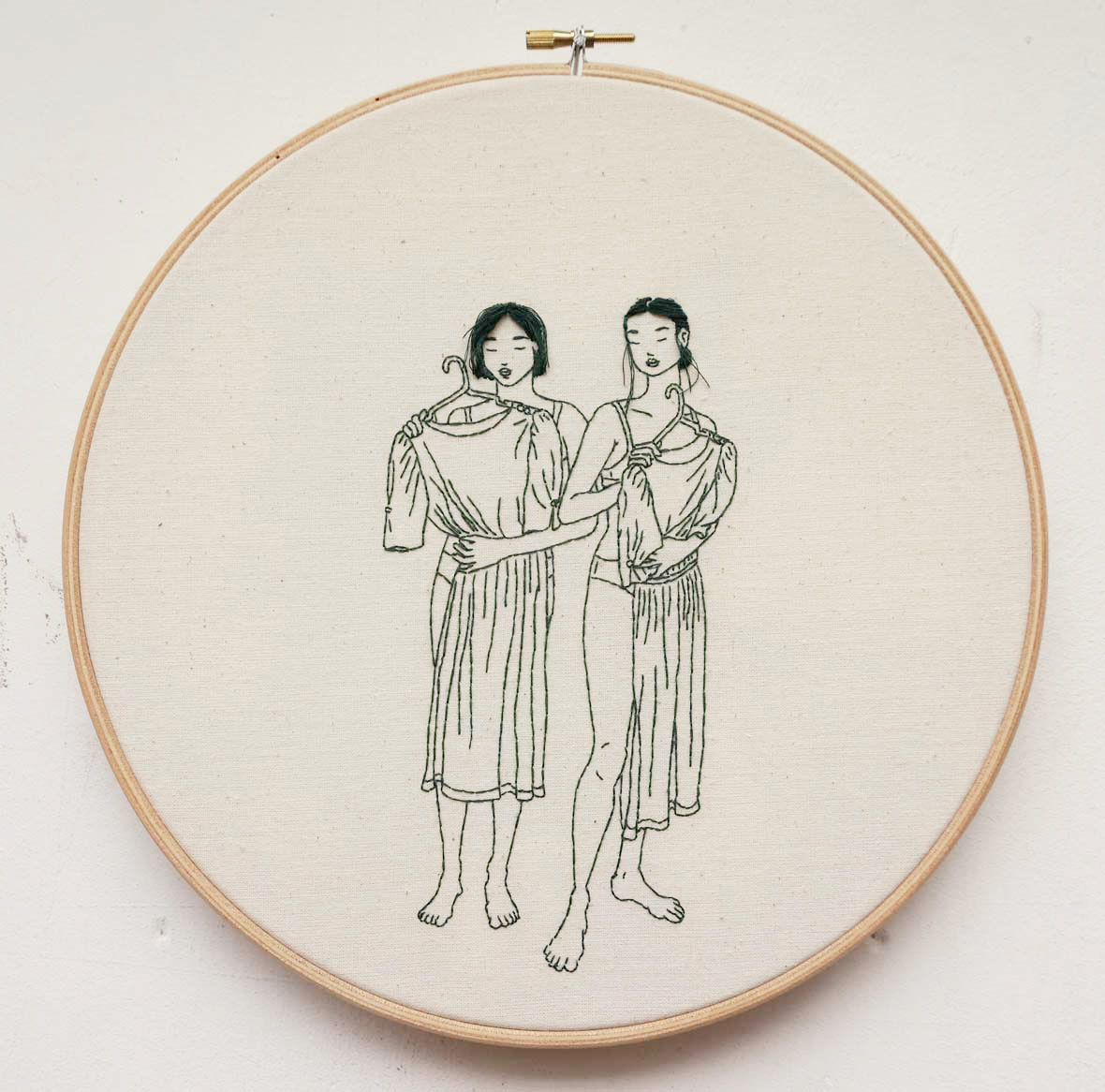 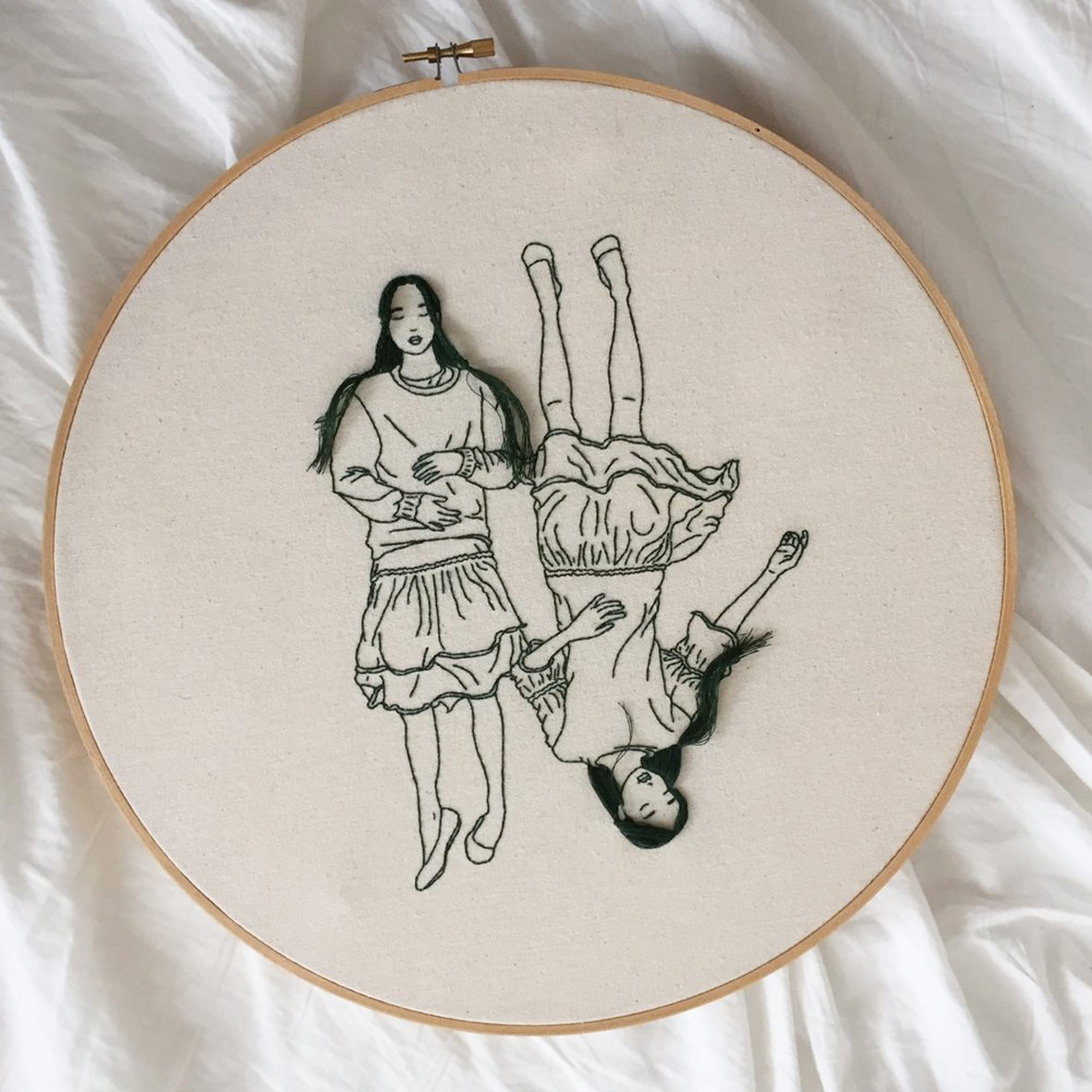 So what’s next for Sheena Liam’s art?

“I’m not sure. I’ve held out on a lot of projects because I wanted to be focused on creating pieces for my show. But maybe now I can relax a little and have more fun with it. If offered the right space and gallery, I’d consider a show in Malaysia. But I don’t have any pieces anymore, so it’ll probably take a few more years.”