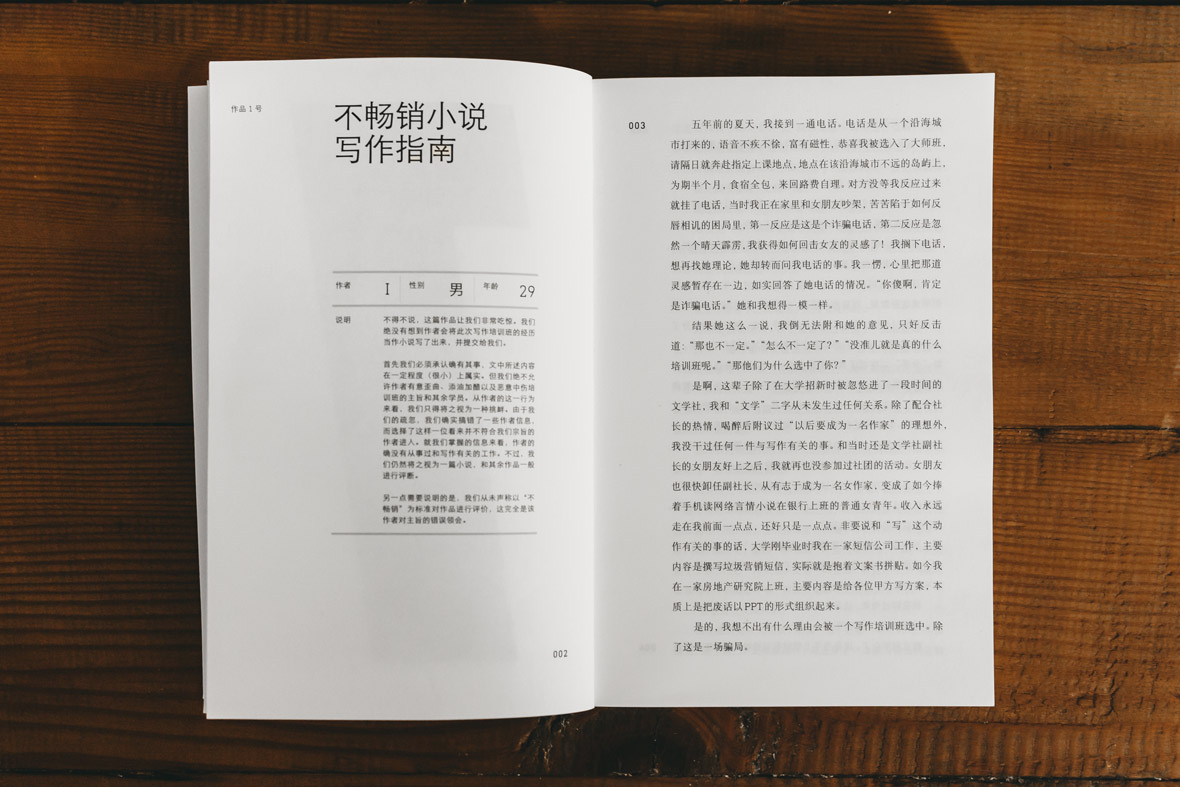 Text no. 1: How to Write a Worstseller

One summer day five years ago, I got a phone call from a city on the coast. The voice on the other end of the line, deep and measured and deliberate, congratulated me on being chosen to take part in a writers’ workshop, and instructed me to leave the very next day for the place it would be held, a small island not far from that coastal city. Room and board would be provided for over the entire two weeks, but I’d have to cover my own travel expenses. The voice hung up before I could reply.

At the time I was at home with my girlfriend in the middle of a fight, desperate to come up with a reply to the last thing she’d said. My first thought was that this was a scam. My second thought was a sudden jolt of inspiration: I found the perfect comeback for the fight. I set down the phone and was about to go on arguing, but my girlfriend turned and asked who’d called. I stopped short, put my comeback on hold, and repeated what I’d just heard. “You’re such an idiot, it’s obviously a scam,” she said.

She had exactly the same thought I did. But now that she’d said it, I couldn’t just agree. I could only counter with: “Not necessarily.”

“What do you mean, not necessarily?”

“Maybe it really is some kind of writing seminar.”

“Then why did they choose you?”

She had a point. Aside from a literary club at university that I briefly got talked into joining, I’d never had a thing to do with literature. Once, carried away by the passion of the club’s president, I drunkenly proclaimed that I too would “one day become a writer.” But I’d never written a single line, and after I got together with my girlfriend, who at the time was the club’s vice-president, I didn’t attend any more of their events. My girlfriend, too, soon quit, and went from aspiring writer to ordinary young bank employee, scrolling through online romance novels on her phone. She’s always been a bit ahead of me in terms of income, though thankfully only a bit. I suppose I did have one writing-related job: after graduation I worked for a text-message marketing company, mostly composing spam texts. In reality, I’d just cut and paste from the ad copy manual. Now I work at a real estate research firm, where my main responsibility is to draft proposals for clients, essentially putting garbage into PowerPoint form.

No, I couldn’t think of a reason I’d be chosen for a writing workshop. Unless it was a scam.

“Or maybe I really do have some literary talent, it just hasn’t been discovered yet,” I ventured.

Often our fights would grind to a halt with that laugh of hers, not because I wanted them to grind to a halt, but because I just couldn’t muster a response. I’d sit there like a dud bomb, and she’d act as though nothing had happened. Through a sort of unspoken agreement, we’d both pretend the whole thing had blown over.

There’s nothing enviable about this. Anyone who’s been in a relationship for more than three years has these kinds of unspoken agreements, and my girlfriend and I had been together for six. I can’t say I hadn’t thought about marriage, of course, nor that she hadn’t thought about finding a new boyfriend. During our first three years we must have broken up 800 times, but in the last three years, we both concluded that breaking up wasn’t so different from getting married, and not mentioning the word “breakup” had become one of our unspoken rules. The other unspoken rules included not exposing each other’s lies, not warning each other we were about to make a mistake, not putting our lives on hold for each other, even for a second. Really, aside from a minor fight each week and a major fight each month, we weren’t doing so bad. And the prospect of staying together had its appeal: as time went by, our fights would gradually become less frequent, so that by the day we died, we’d have returned to the honeymoon phase when we could communicate without words. We’d have grown old together.

But this time, I had that comeback to use! Had it not been for that phone call interrupting us, I bet we’d still be hashing out that fight. Who was right and who was wrong had yet to be determined.

That’s why this time I ignored her laugh. “Yes, me. What’s so funny?”

She didn’t expect me to keep going. She gave me a look, then suddenly opened her mouth and reeled off: “The wind is heedless of the slender branch, no dew ignites the cinnamon leaf’s fragrance.”

I didn’t turn around. What did that mean?

Slowly, she asked, “What comes next?”

All at once I understood. That was something I wrote for her in college. After she read it she asked, much to my surprise, what the next two lines were. How should I know what the next two lines were? Those were the only ones I copied out of that volume of Li Shangyin’s selected verse! At the time we were head over heels in love, and naturally this awkward little episode had been quickly swept under the rug. I couldn’t believe she still remembered.

She saw I didn’t respond, and laughed again. “Ha!”

It was that second laugh that made me make up my mind.

The next morning, when I’d packed my bags and was getting ready to leave, my girlfriend, who had just gotten up, groggily asked where I was off to. “The workshop,” I coolly replied. Then I walked out the door and didn’t look back. 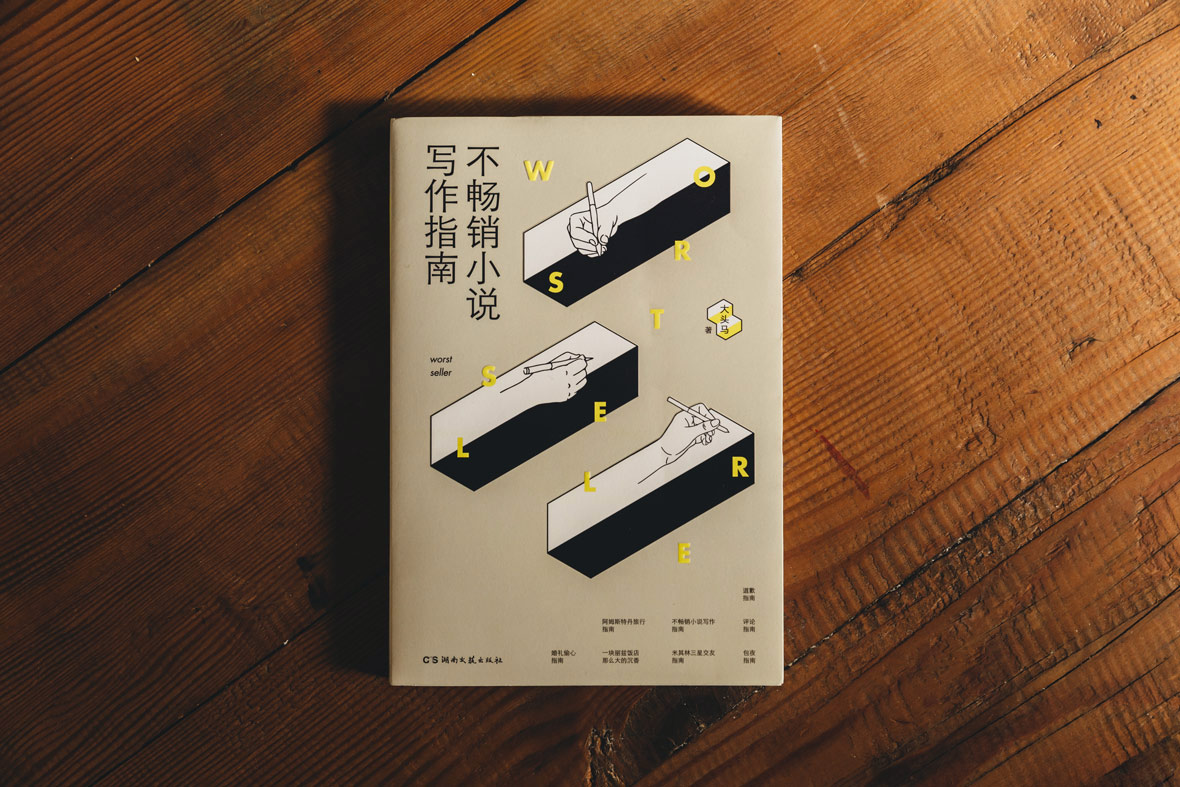 How to Write a Worstseller
by Da Tou Ma
Hunan Literature and Art Publishing House, 2017

Click here to go back to the original article.