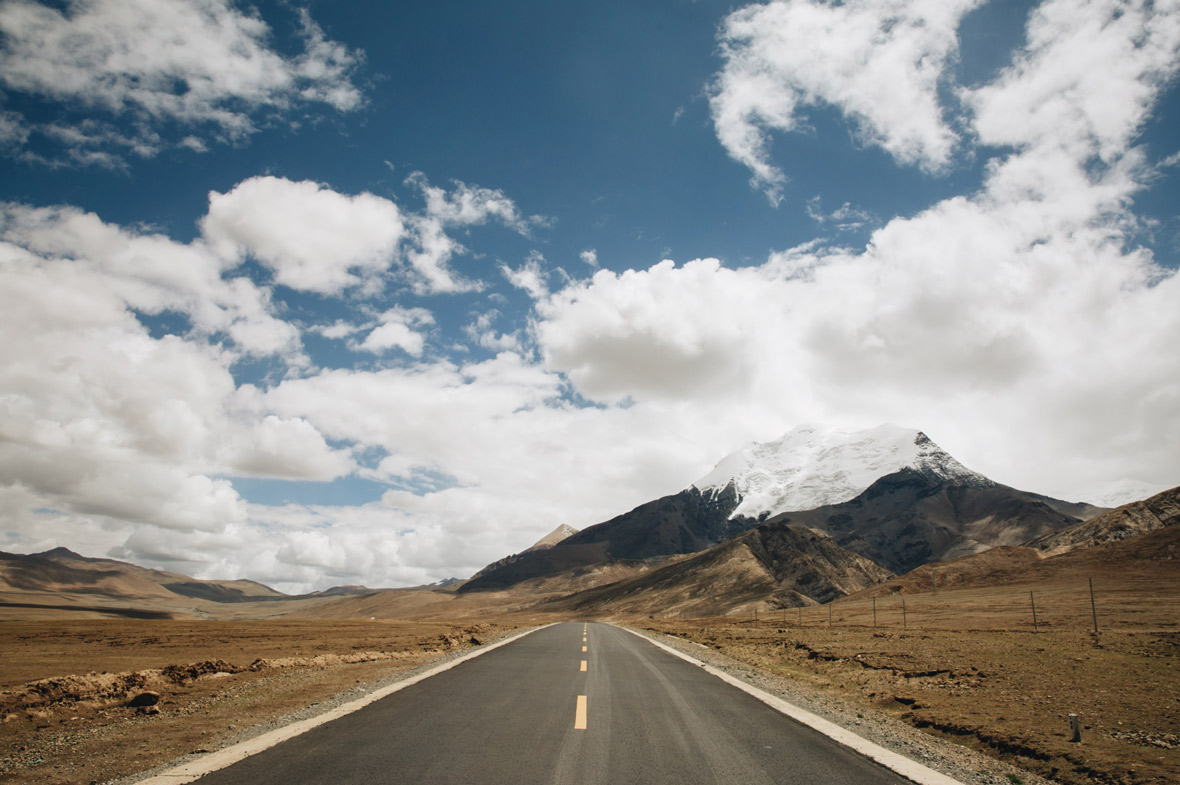 Having lived in mainland China for over six years, I had always wanted to travel to Tibet. For many casual travellers, it is a remote region of the world, both vast and harsh – and in many ways, also not without its own share of obstacles to access. Its allure, while partly from the pure natural beauty of its wild terrain, lies also in the mysterious culture of the nomadic Tibetan people and its folklore; the romance and spirituality of Tibet inspire an irrepressible kind of wanderlust. 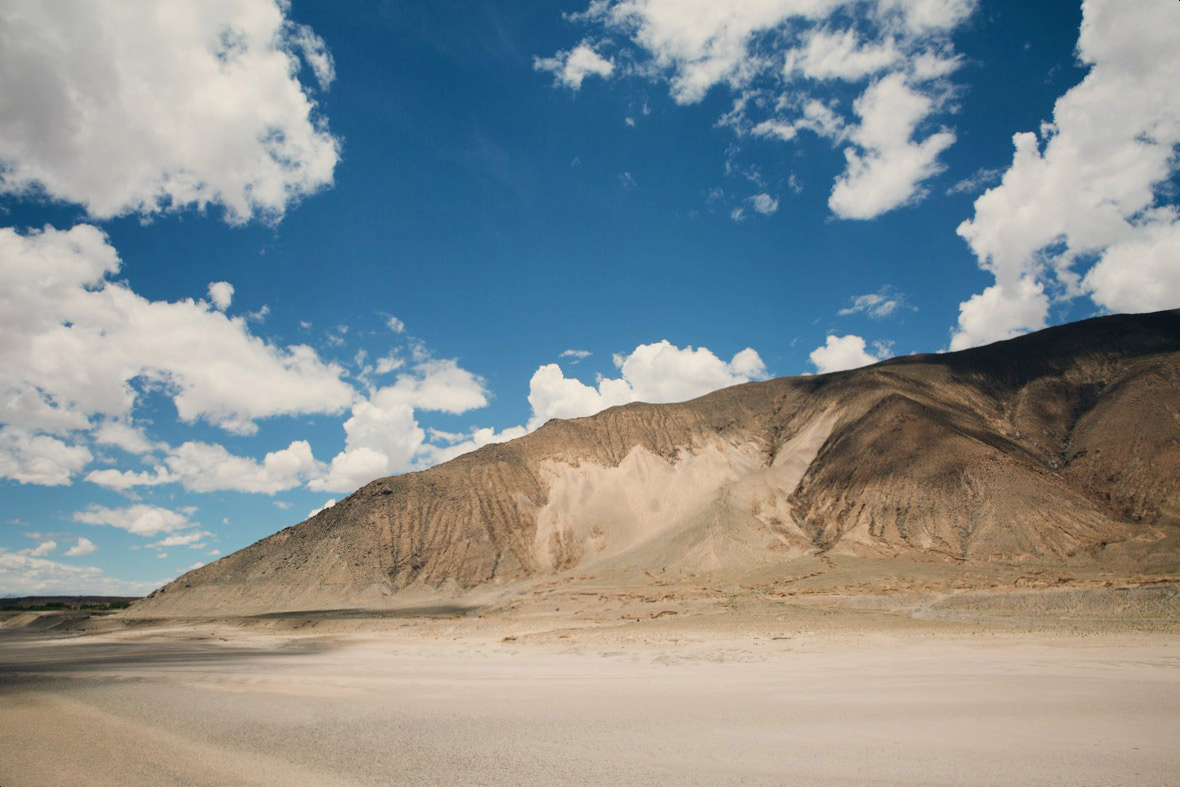 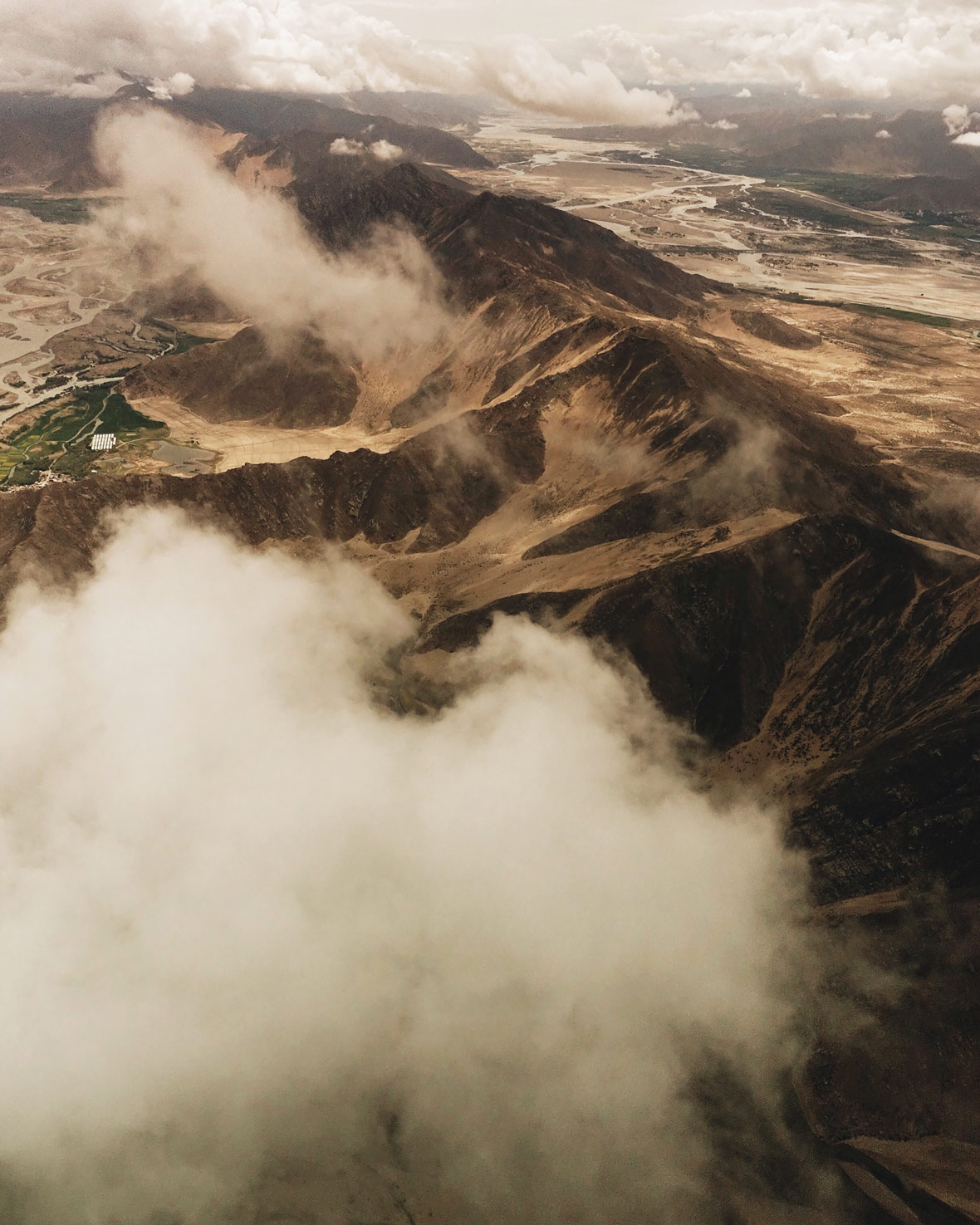 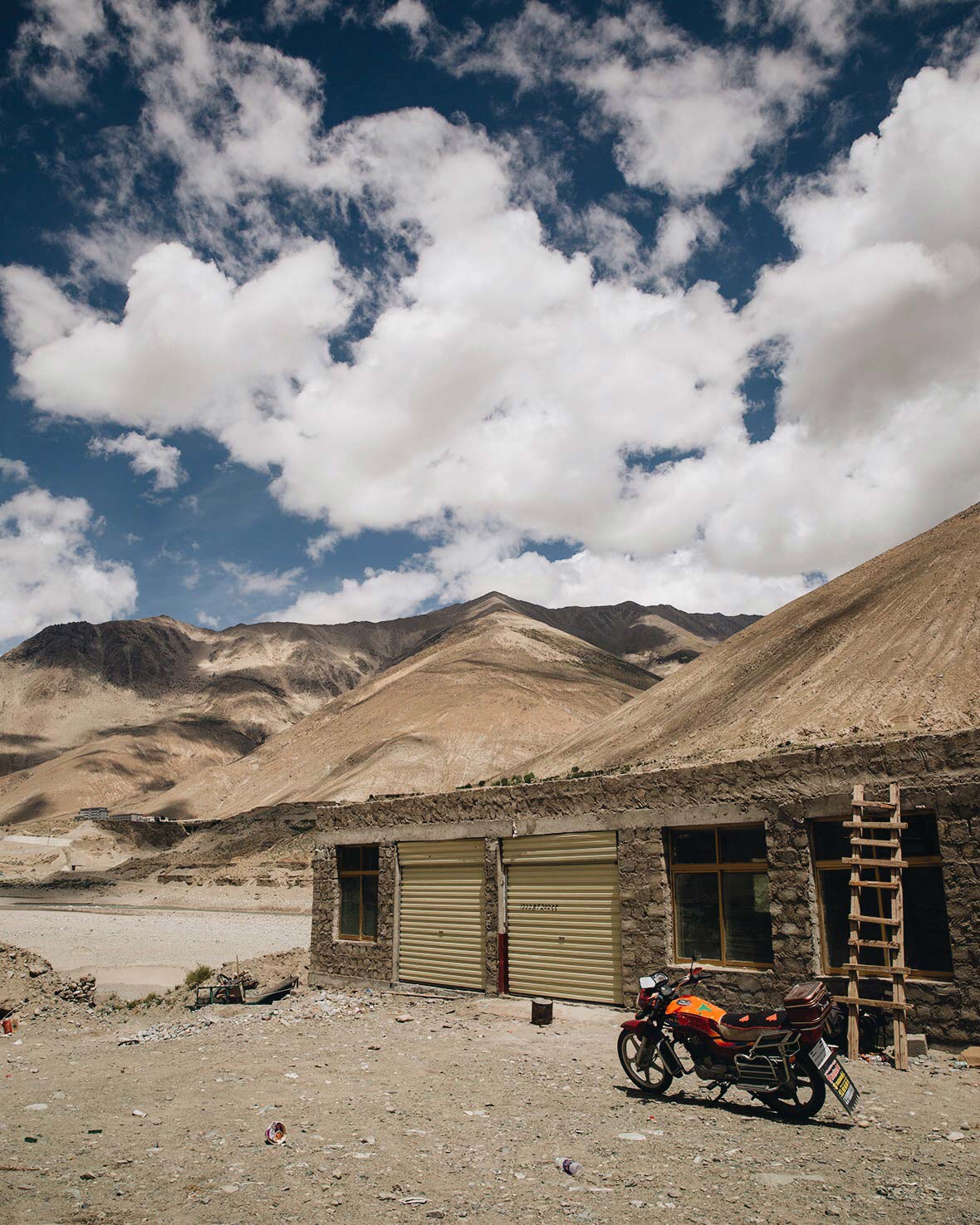 Landing in Lhasa Gonggar Airport, it can easily feel like you have arrived at the top of the world. The approach to the remote airport takes you over miles and miles of spectacular mountains which dramatically reveal themselves through atmospheric layers of clouds. The name Lhasa means “place of the gods” and the city itself is one of the highest in the world. Situated in the center of the Tibetan Plateau, the city has an elevation of approximately 3,600 meters. Even upon landing, the air can feel noticeably thin; it has about 35-40% less oxygen than at sea level, which for many travellers, can contribute to altitude sickness and shortness of breath. 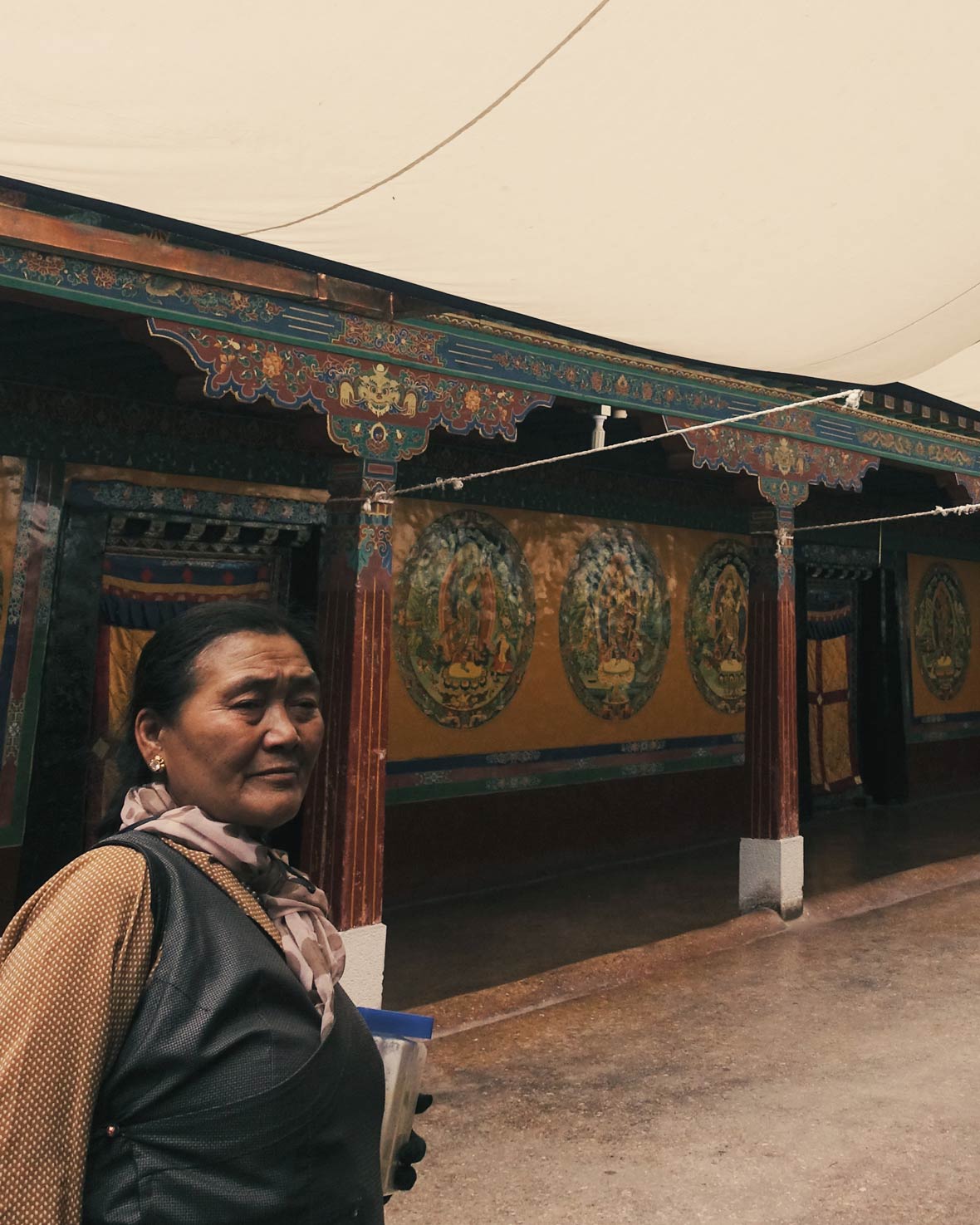 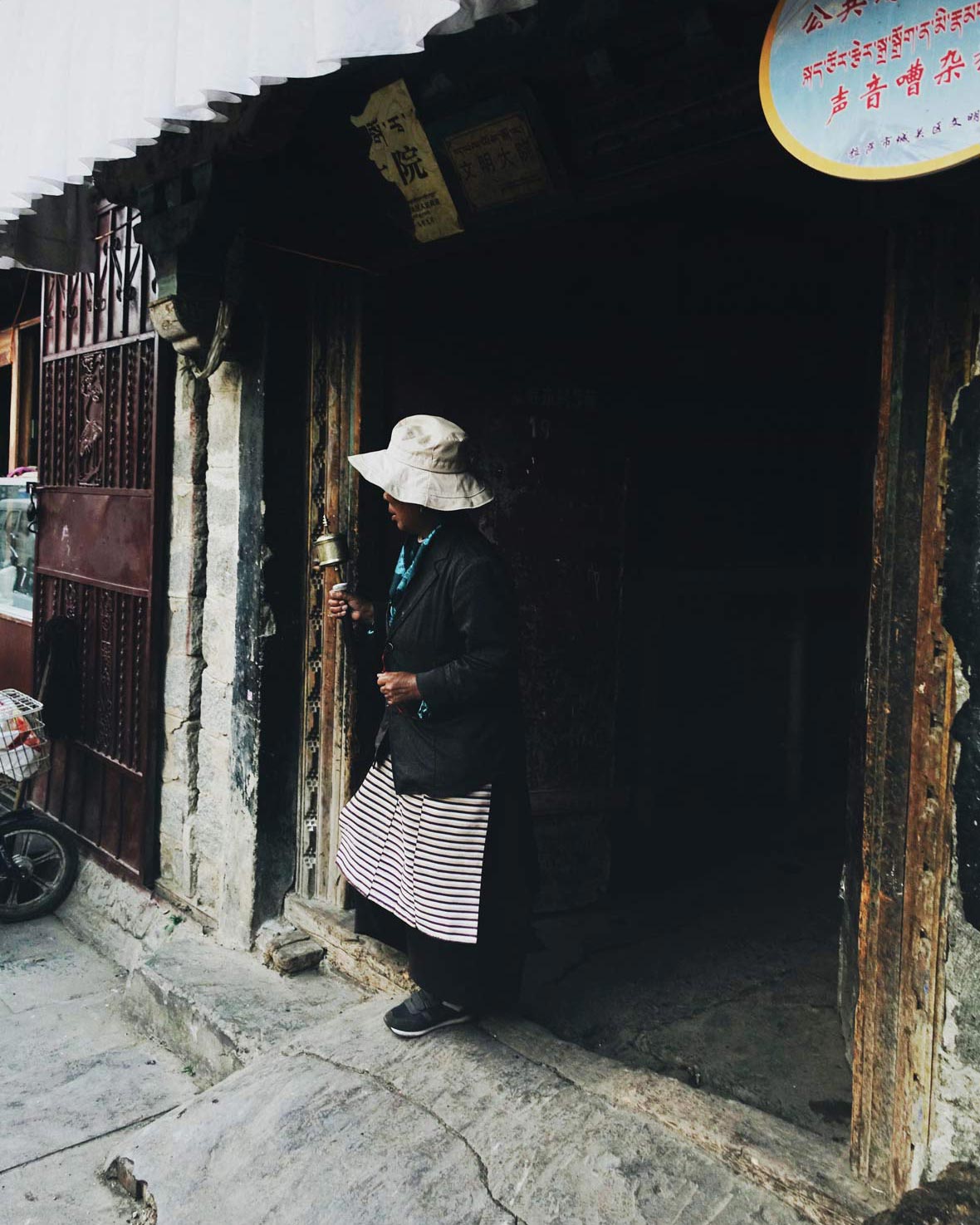 Driving into the city proper, we passed through the Chinese-built quarter; a curious mix of half-finished high-end shopping malls, modern hotels and restaurants, it at first resembles almost any second-tier city in mainland China. But once inside the old Tibetan quarter, a far more interesting and authentic part of the city with its byzantine alleyways and side streets, visitors can still get a sense of some of the medieval markets and street life that used to exist in Lhasa’s old town. 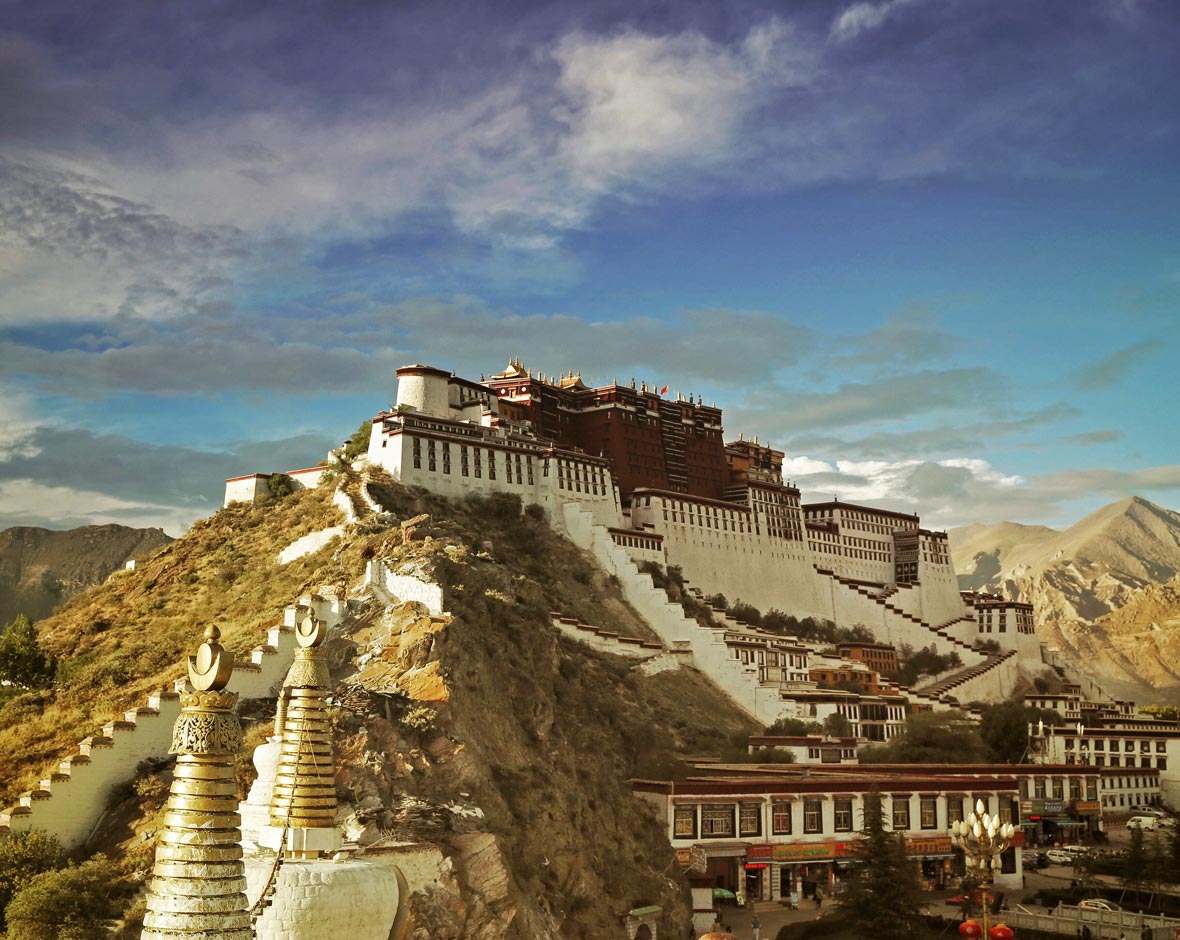 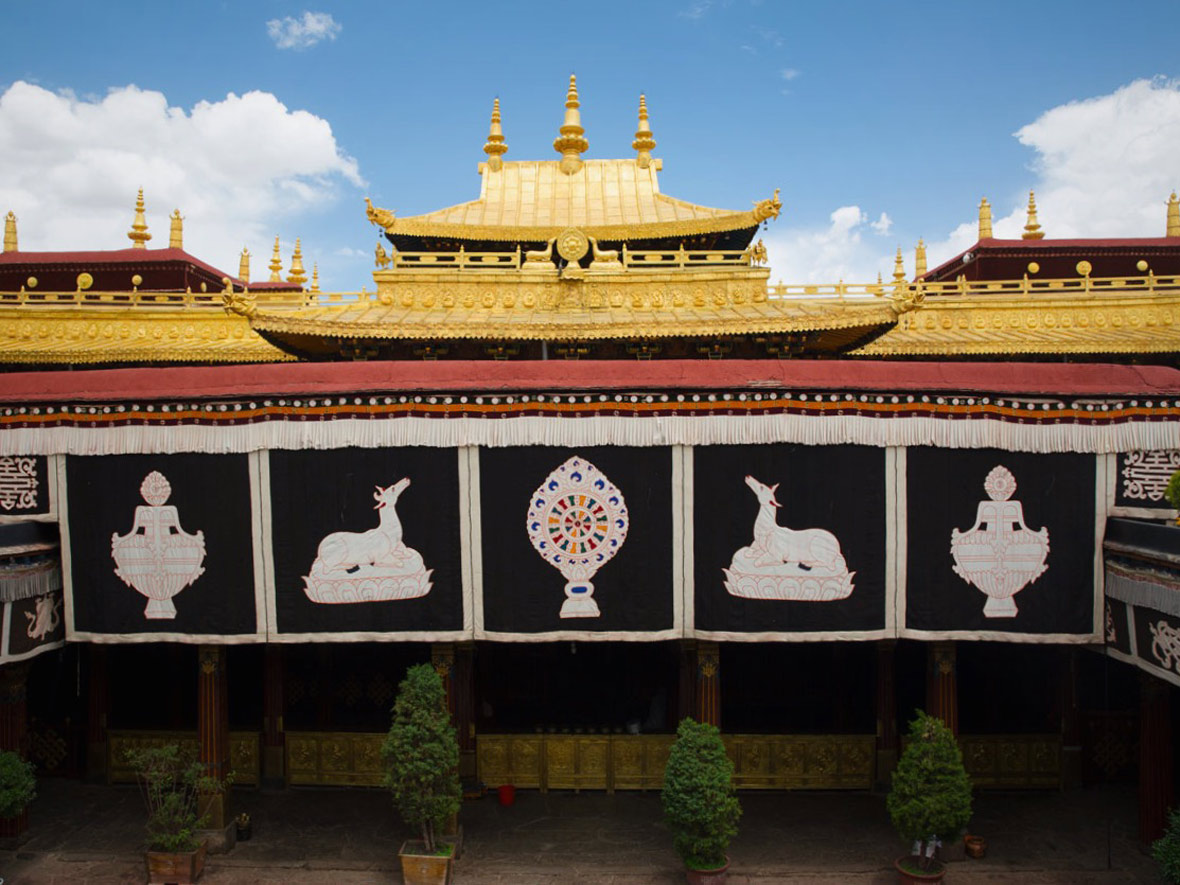 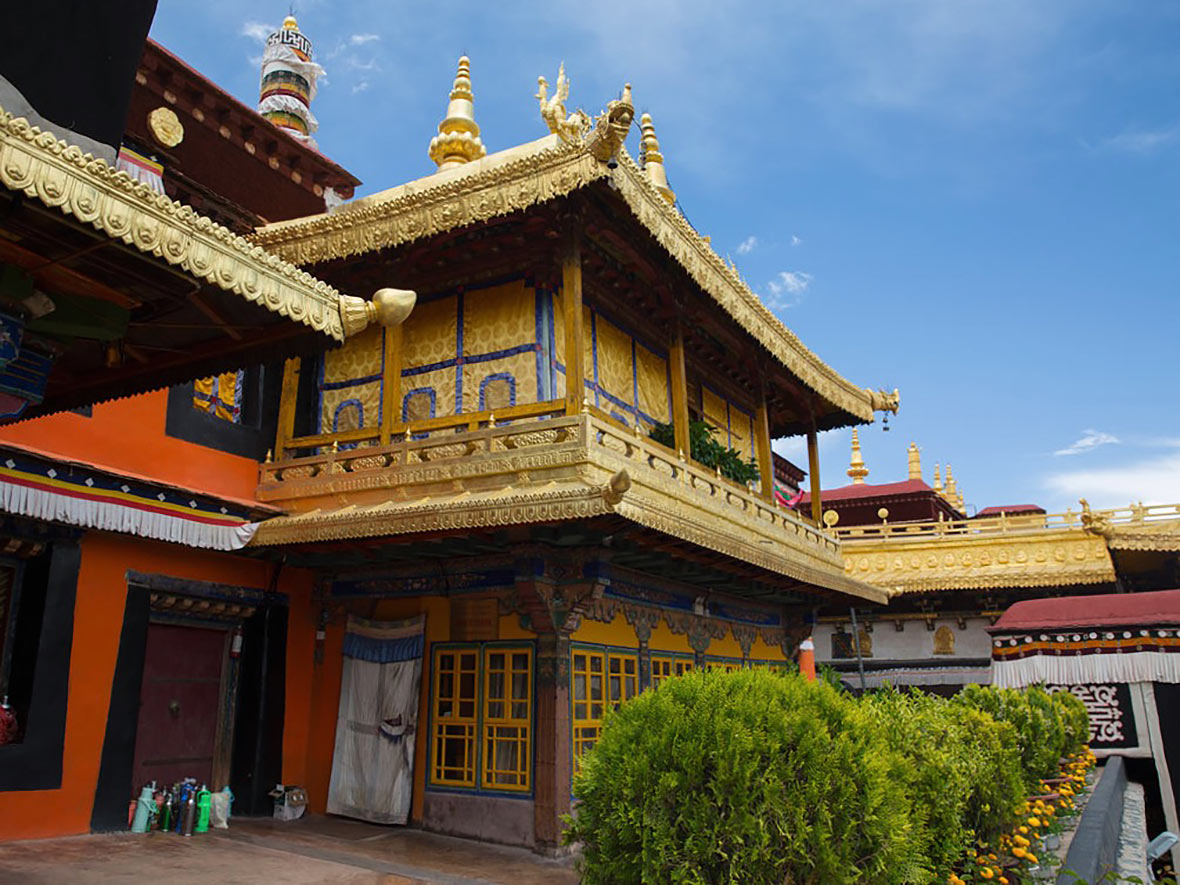 The holiest city in Tibet, Lhasa is known for its ancient monasteries and Buddhist temples. Its most iconic structure is the Potala Palace, the former chief residence of the Dalai Lama in Lhasa, which is famously depicted on the back of the Chinese 50 yuan banknote. Perched impressively like a fortress on a hill, the Potala is the highest ancient palace in the world and is an important symbol of Tibetan culture and history. Buddhist pilgrims, who come from all over Tibet to travel to Lhasa, will come to pay homage to the royal palace by walking clockwise around the entire estate. Pilgrims can often be seen circling the Jokhang Temple in Barkhor Square just nearby, performing a curious repetitive ritual of prostrating themselves on the ground and advancing forward a step. It is not uncommon for some to prostrate all the way from their hometown to Lhasa, a feat which can reportedly take up to two years to achieve. For these devout Tibetans, this tantric ritual of performing these tens of thousands of prostrations serves as a means to overcome one’s pride and achieve nirvana. 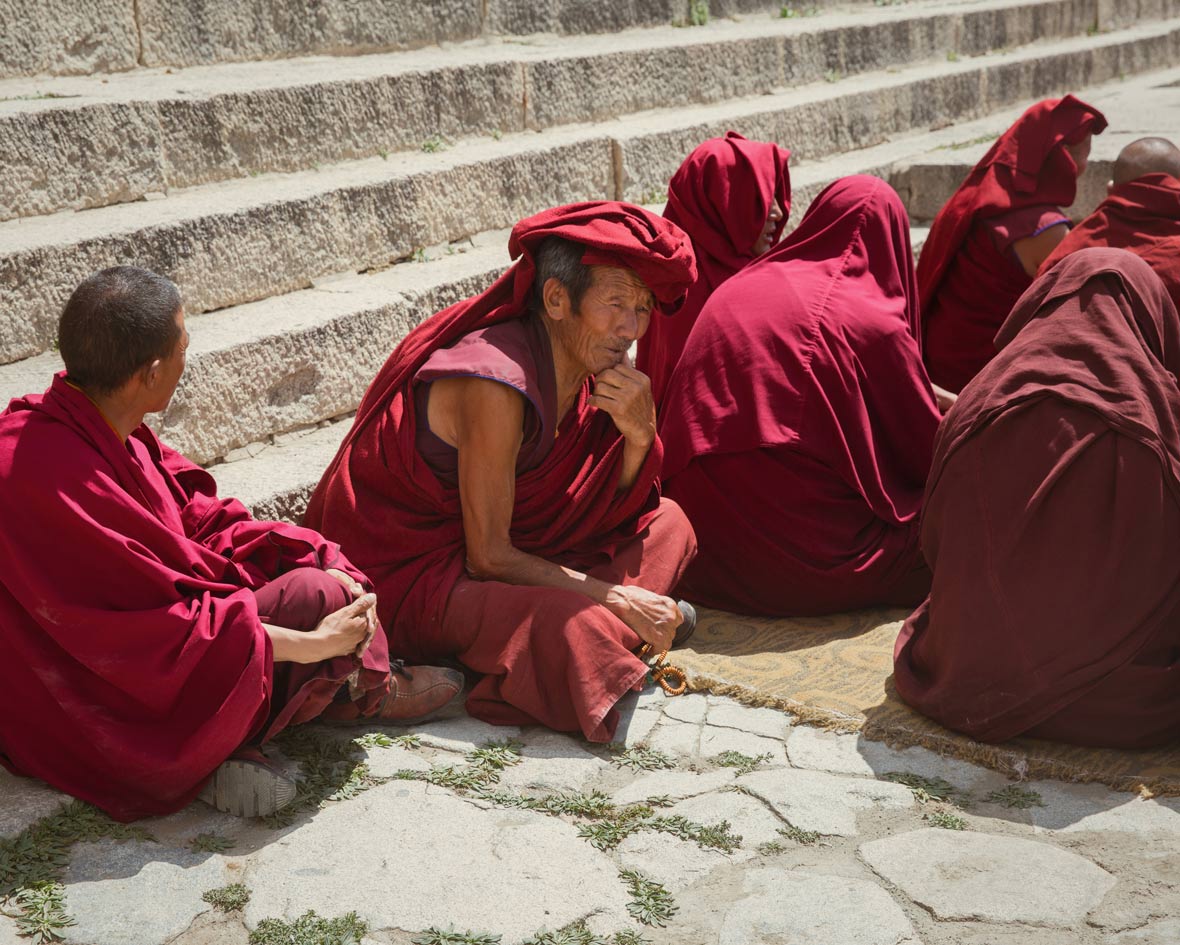 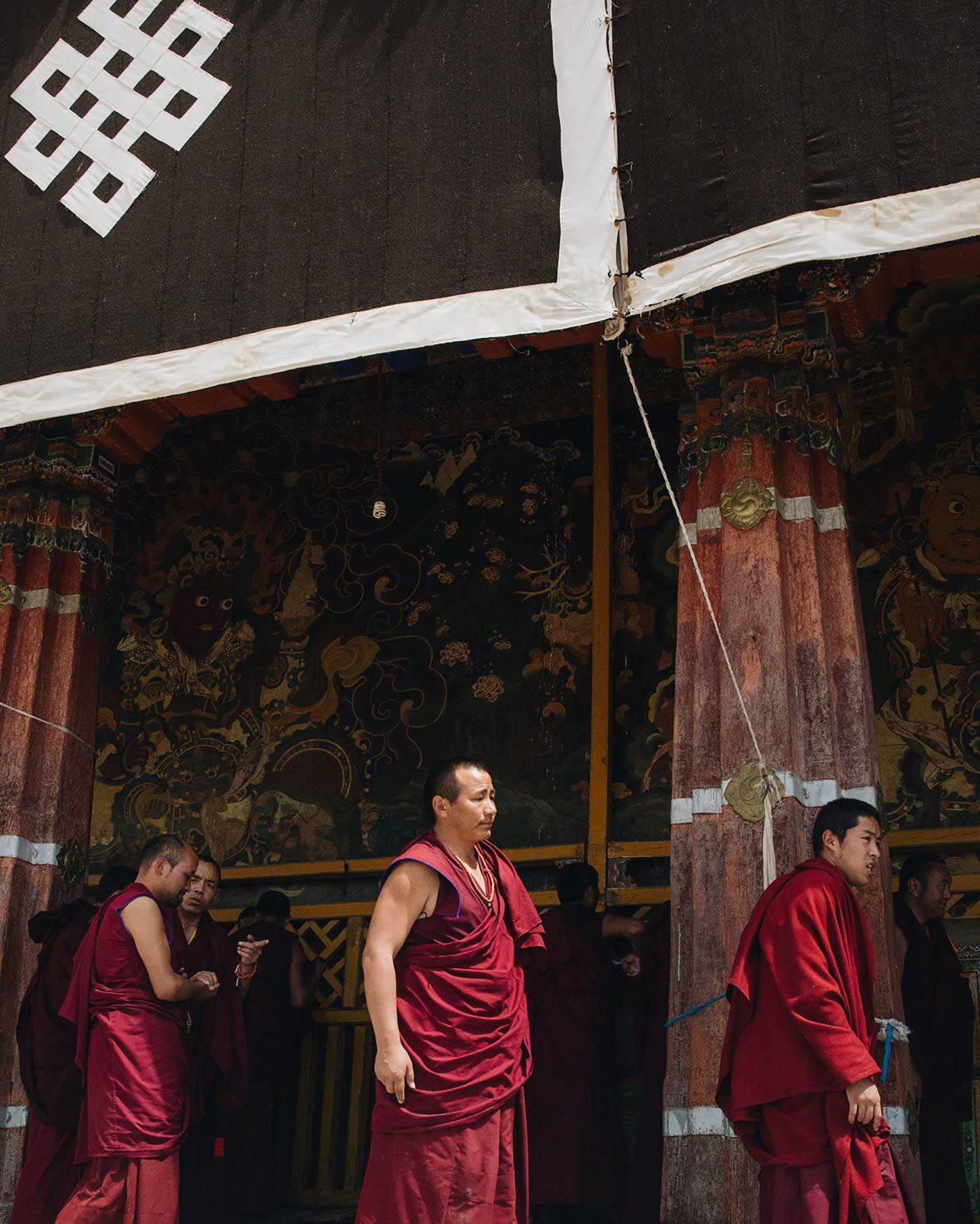 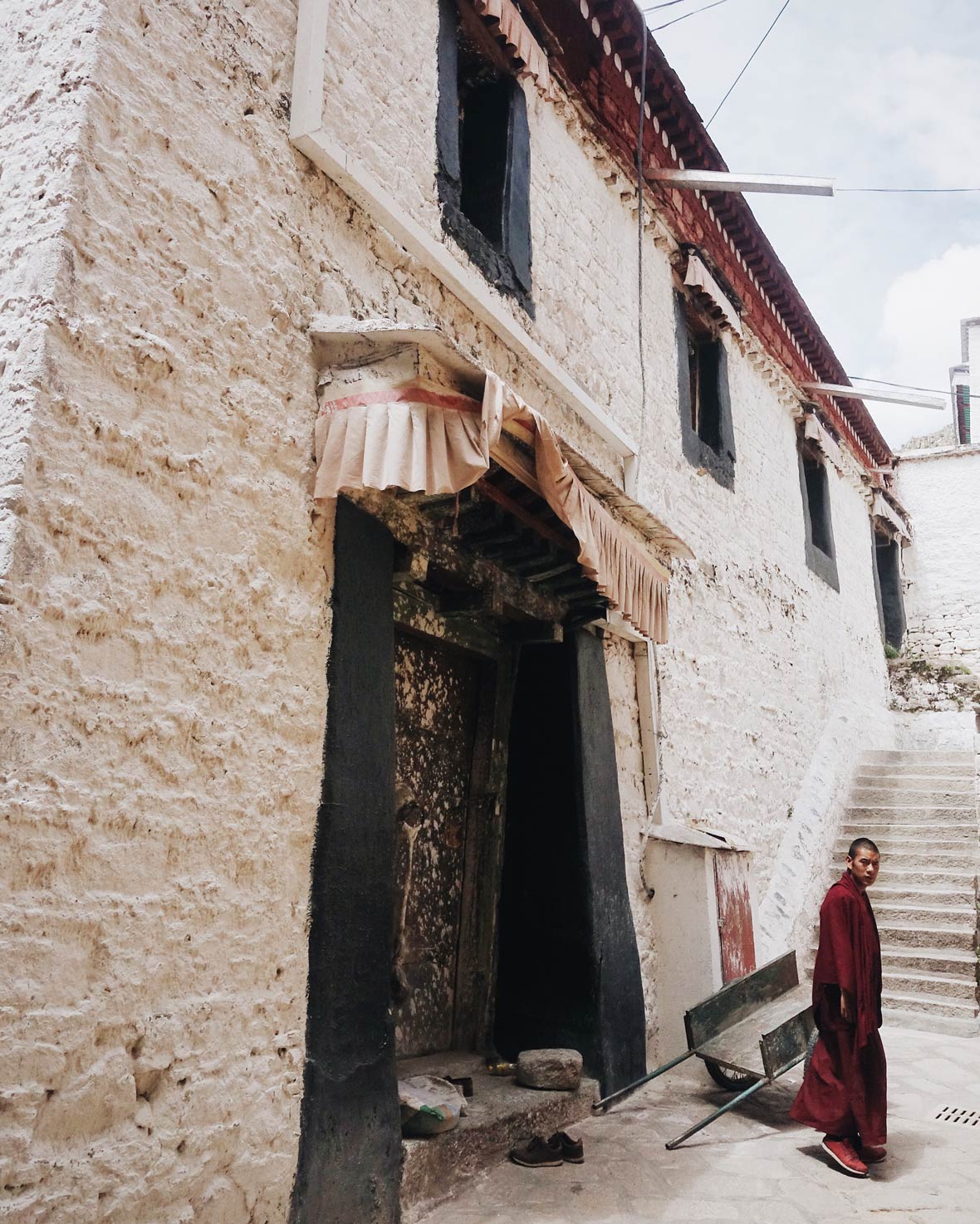 Lhasa is often referred to by the locals as the “sunlit city”. On the day we visited Sera Monastery, on the northern outskirts of the city, the complex was bathed in abundant, warm sunlight. A place of learning for Tibetan monks, the monastery is known as one of the best locations in Tibet to observe outdoor debating sessions of Buddhist doctrines among the monks. Set in the “debating courtyard” outside the main assembly hall, the sessions are based on lively philosophical exchanges between questioners and defenders. The defenders, usually junior monks, are seated, while the questioners test their knowledge of Buddhist scripture. The questions posed are often punctuated by dramatic hand slapping gestures, a prompt for the seated monk to respond. Sera Monastery, along with Drepung Monastery, which we also visited on the same day, are among the important “great three” university monasteries for Tibetan Buddhism. 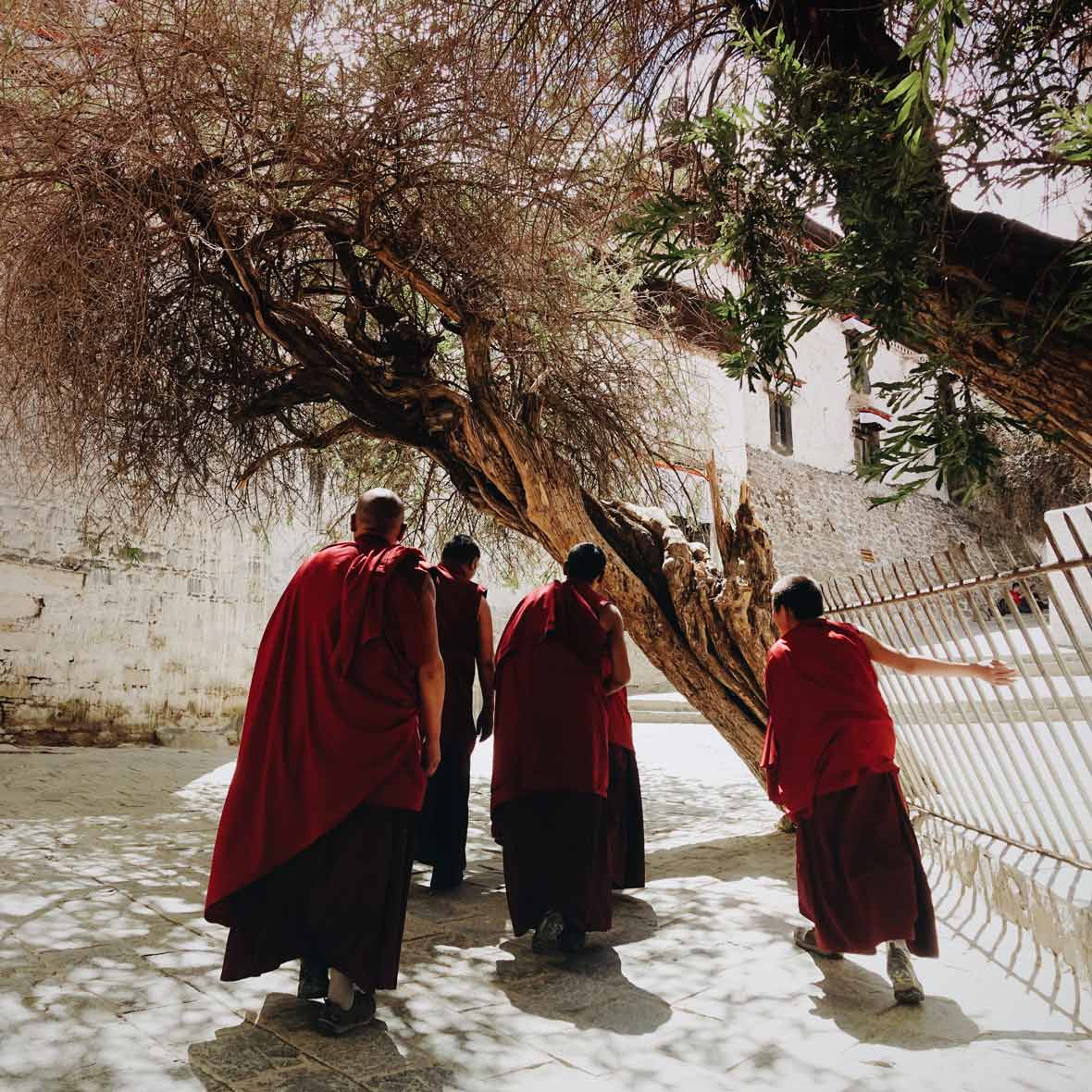 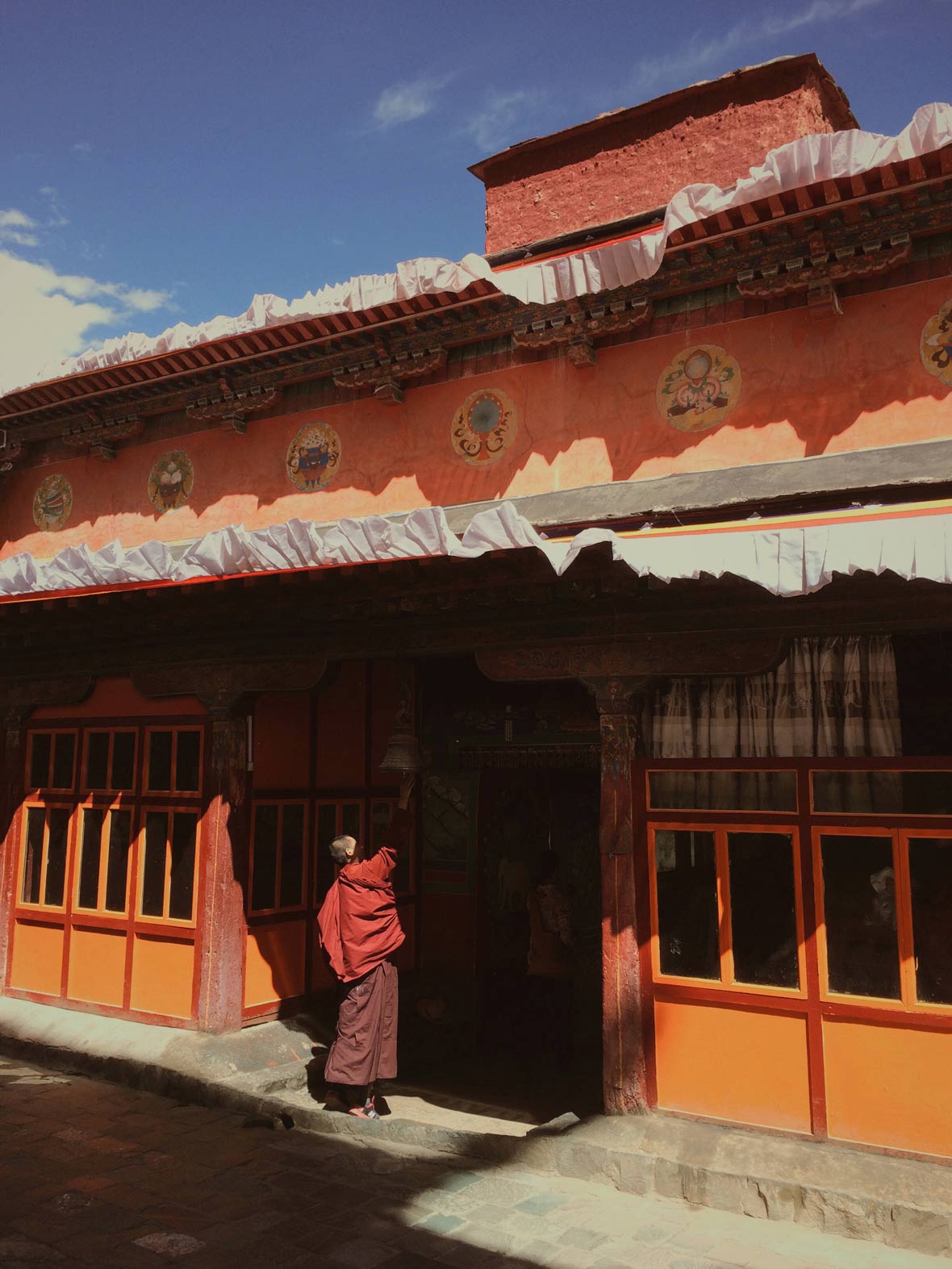 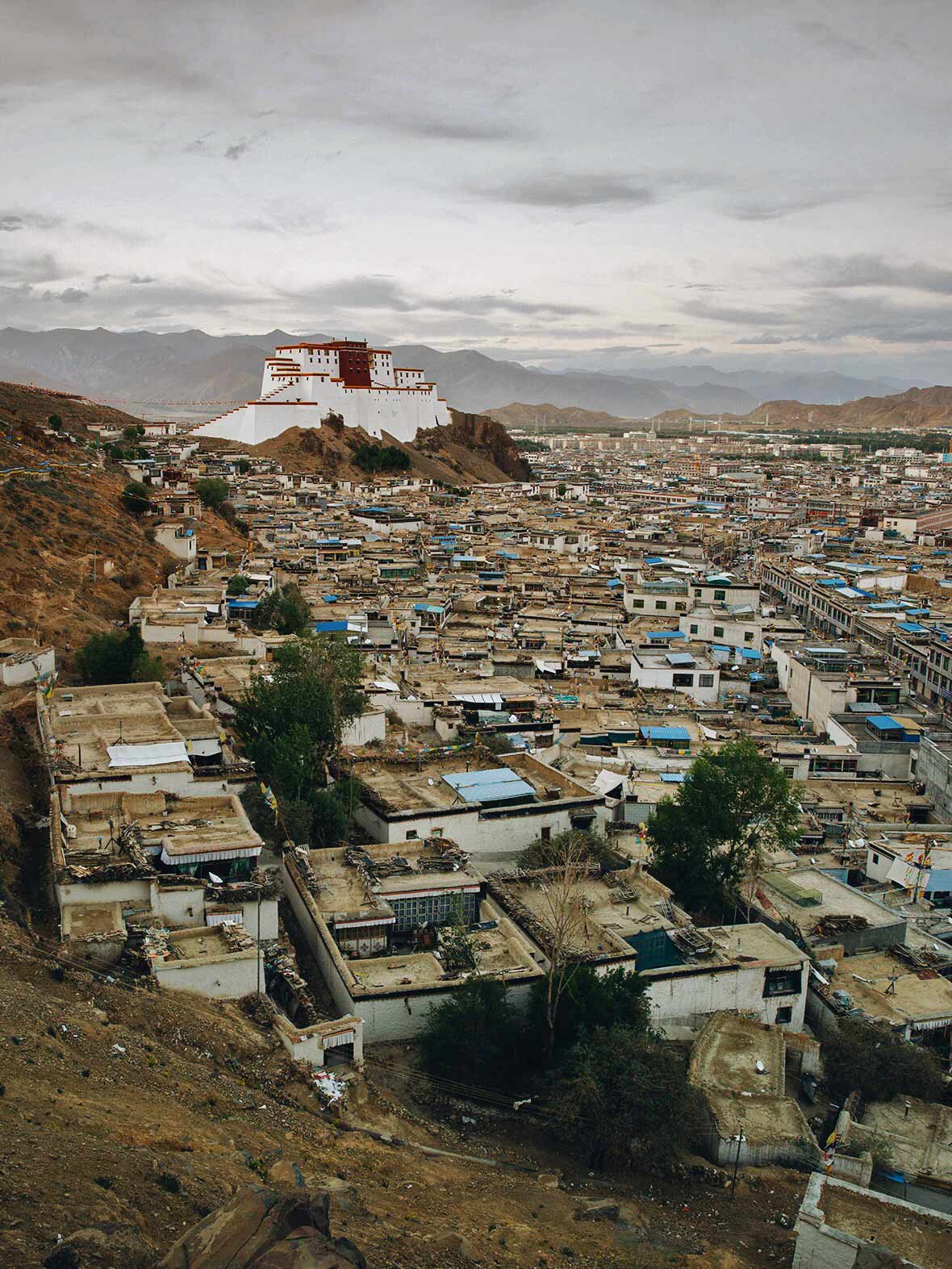 The following morning, we prepare to head out to Shigatse, a five hour drive from Lhasa. Shigatse is the second largest city in Tibet – but with a population of only 12,000, it is actually quite small by Chinese standards. It is home to the beautiful Tashilhunpo Monastery, the traditional seat of the Danchen Lamas. Behind the monastery is a hill lined with rows of Tibetan prayer wheels and small shrines, leading upwards to a stunning view of the Shigatse Dzong. Resembling a smaller prototype of the Potala in Lhasa, the original structure of Shigatse Dzong was completely destroyed during the Cultural Revolution, and later reconstructed in 2005. After a short stay in Shigatse, we continued on to Everest the next day. 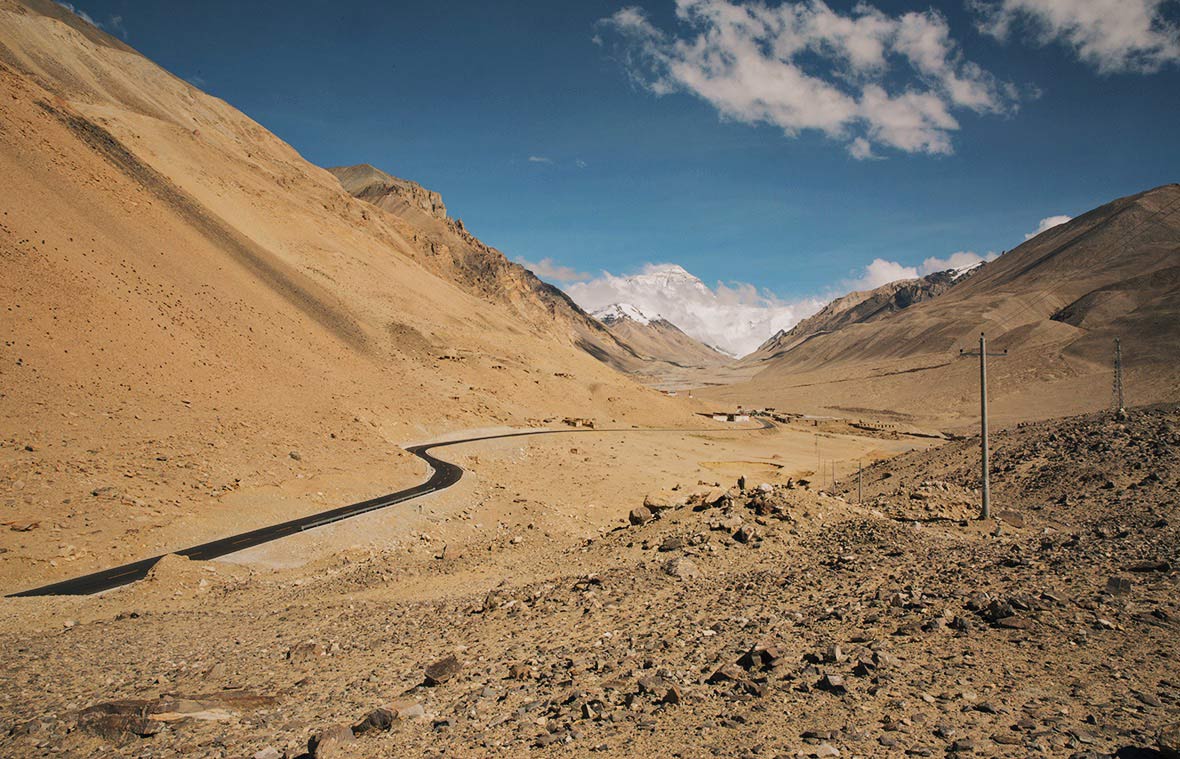 The journey to Everest Base Camp was a time-consuming and tiring one. From the city of Shigatse, it is an additional eight hours by car, often happening on long and winding roads at increasingly higher altitudes, and with frequent checkpoints. The journey for us passed by quickly as there was no shortage of distractions along the way: yaks and sheep grazing in a largely uninhabited Tibetan plateau, dramatic vistas of mountains and slopes, serene lakes and reservoirs – even a few glaciers, and finally as we neared our final destination, snow-capped peaks. When Everest first reveals itself to us, it is truly a breathtaking sight: a lone snow-capped peak far off in the distance, shrouded in mist. 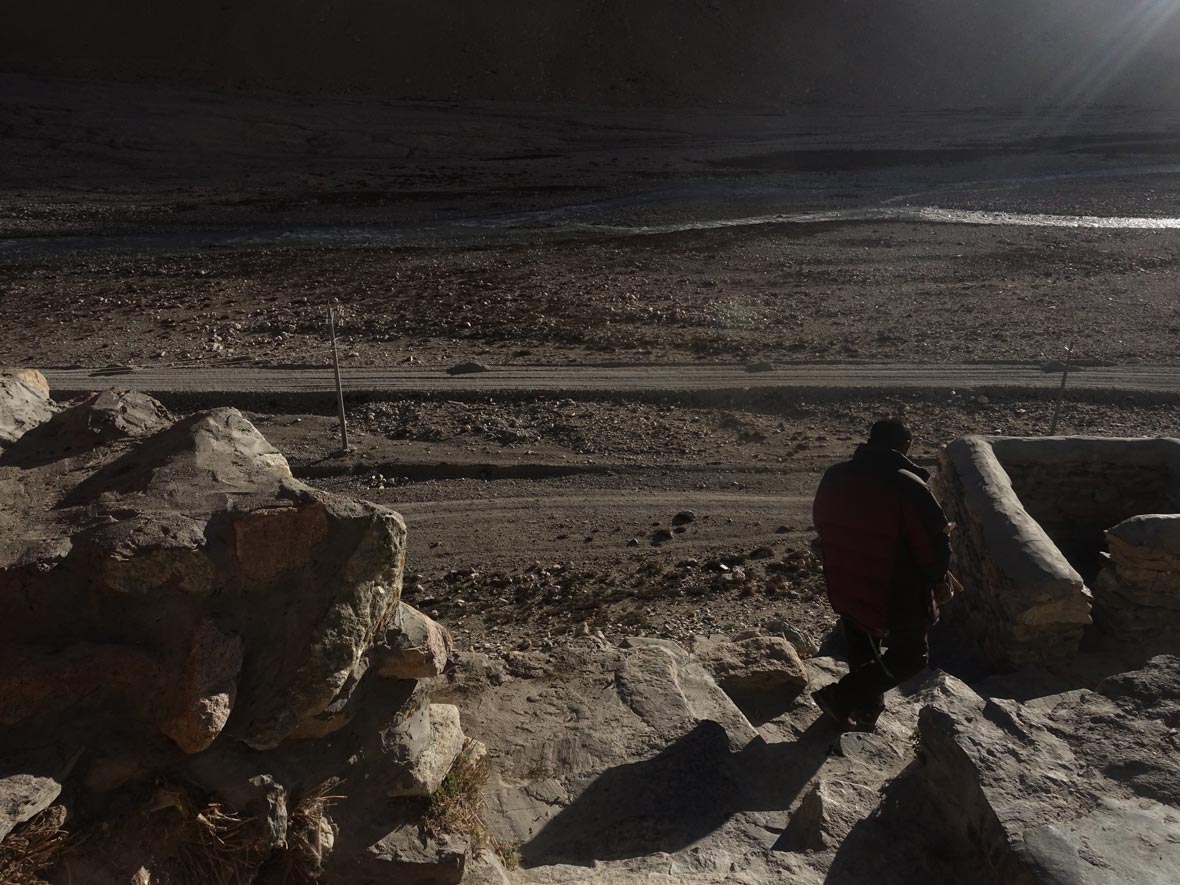 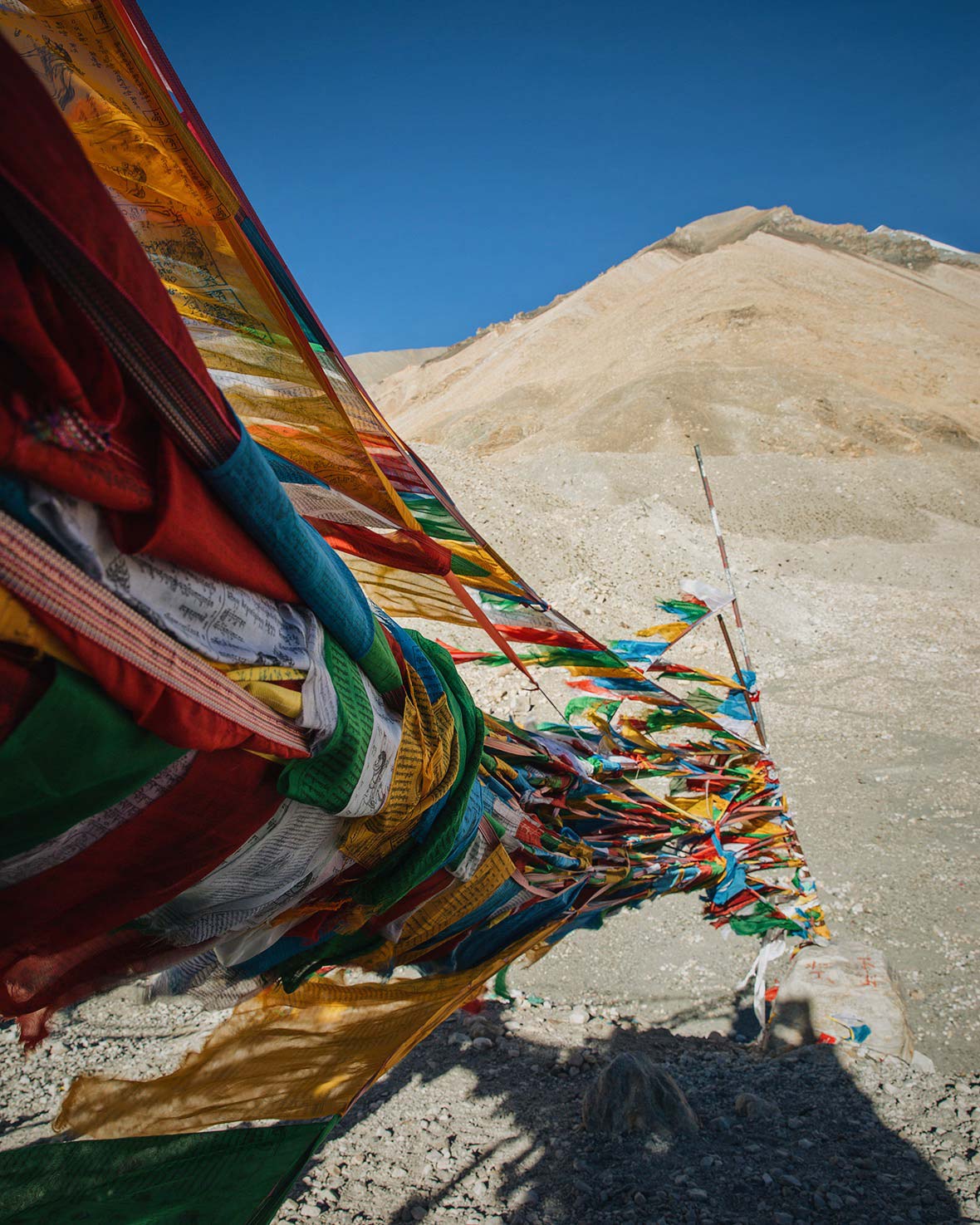 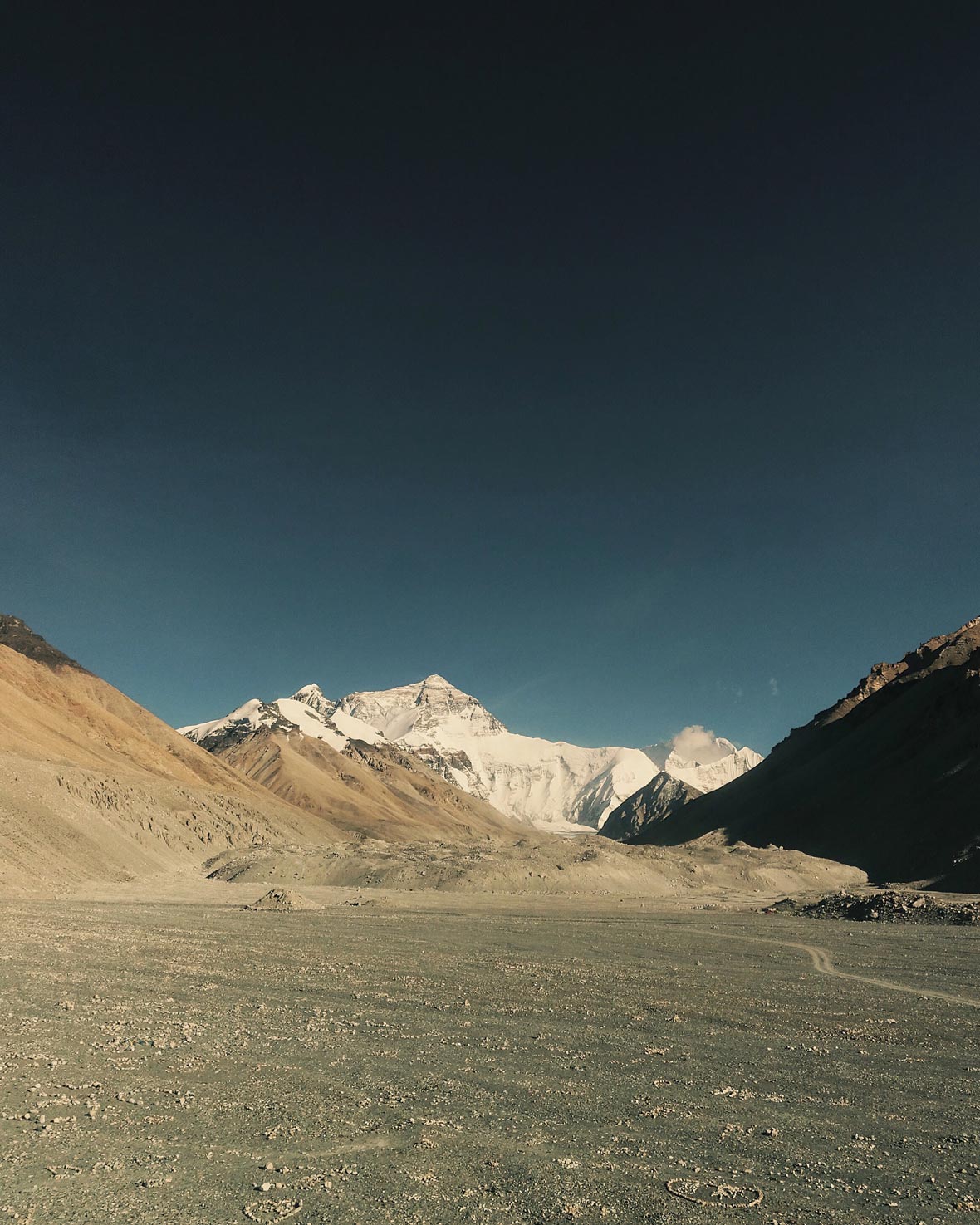 5,150 meters above sea level, Everest Base Camp is a rudimentary campsite used by mountain climbers ascending and descending Mount Everest. Just a short hike away is the lesser known Rongbuk Monastery, which is claimed to be the highest monastery in the world. Though much of its original structure was destroyed during the Cultural Revolution, a lot of it was later restored. Rongbuk’s small, underground and cave-like shrine is a marvel, and the monastery’s view of the north side of Mount Everest is worth a visit in itself. 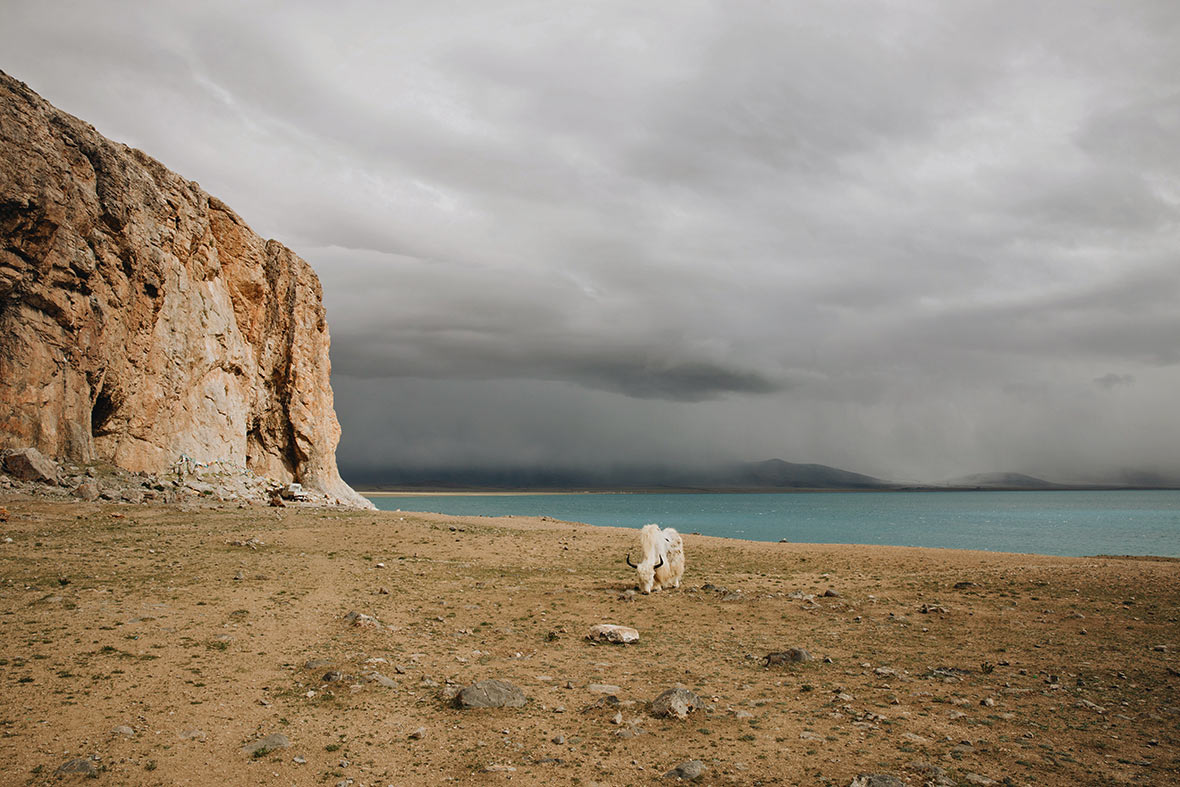 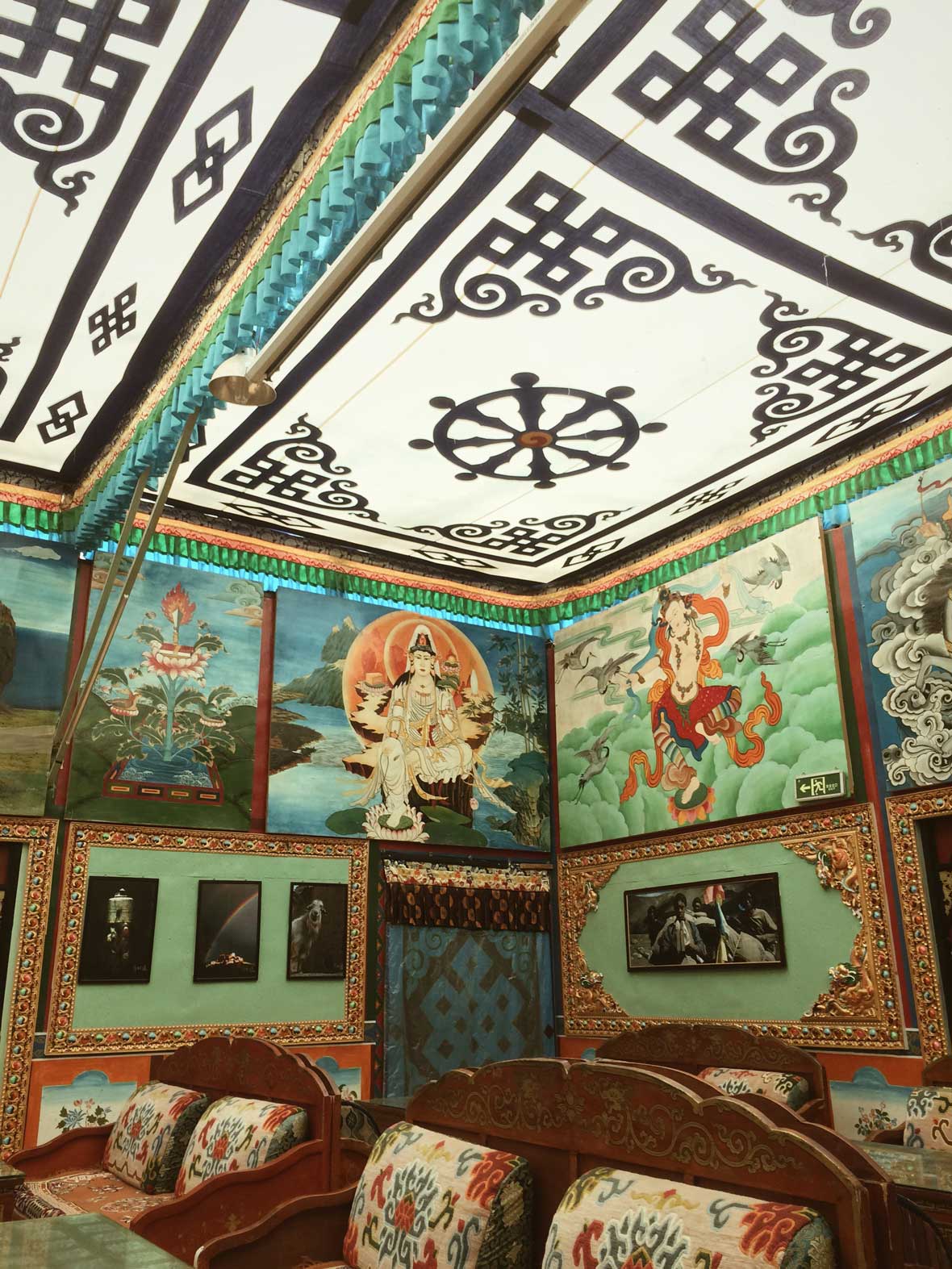 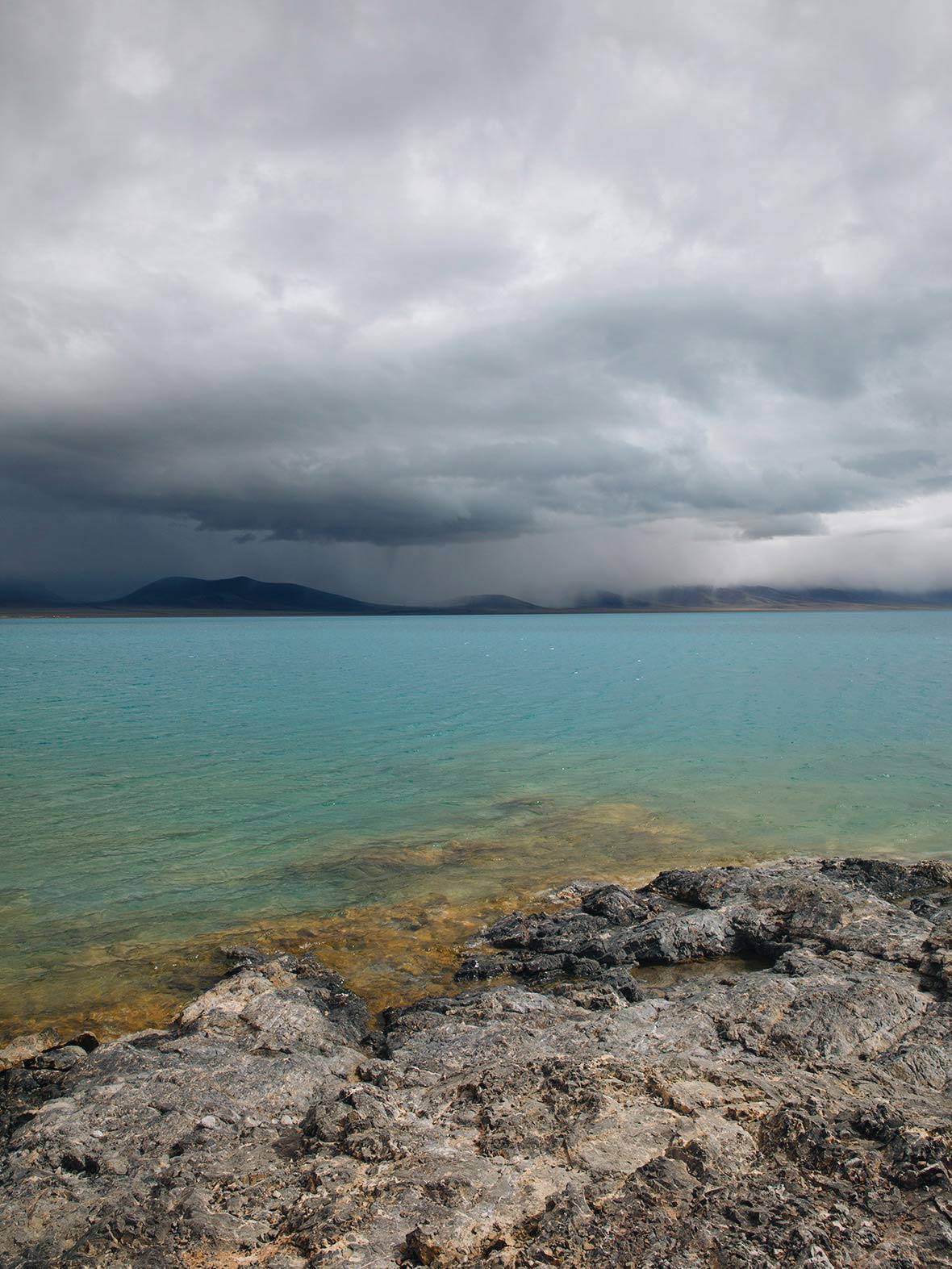 After a night at Everest Base Camp and a short return to Shigatse, we set out for Namtso, also called Lake Nam, which is considered a holy lake in Tibet. There are five islands in the lake which pilgrims used to make spiritual pilgrimages to by walking over the frozen lake in the winter. They would then spend the year there until the following winter when the lake would freeze again. The weather famously changes rather quickly at Namtso; there was even a small threat of a snowstorm from the other side of the lake on the day we were there. After a day of exploring, we stayed overnight at the Namtso Holy Lake Guest House, a modest but fairly comfortable place with charming wall-to-wall Tibetan decorations, before setting out again for Lhasa. 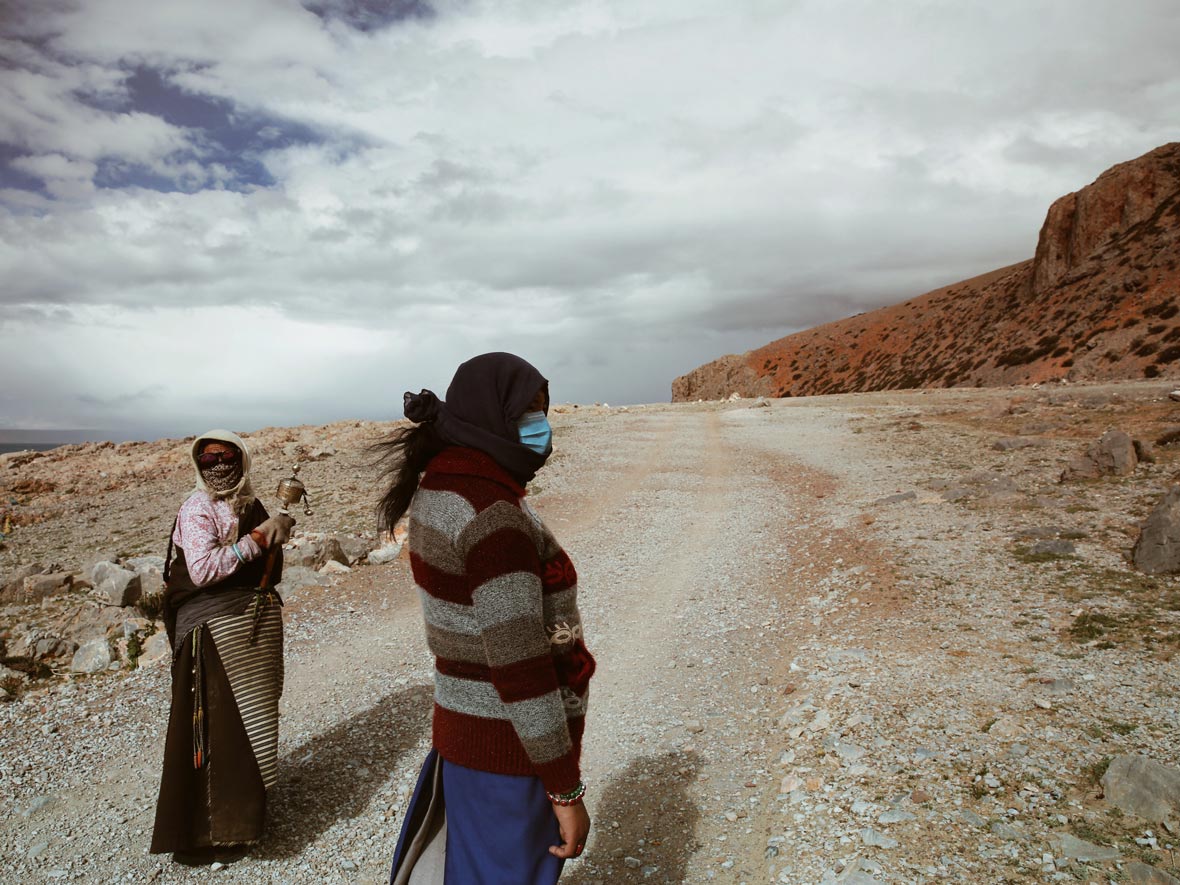 Our last couple days in Lhasa marked the beginning of the rainy season, when there is typically heavy rainfall almost every night in Tibet. Leaving Lhasa in the middle of a downpour, at that precise moment, felt like a very fitting ending to an unforgettable adventure. After a long day of transfers and on arriving back in Shanghai, it took another week just to decompress and digest all the experiences from the trip. I was home, but still completely mystified by the mysterious ways of the Tibetans.