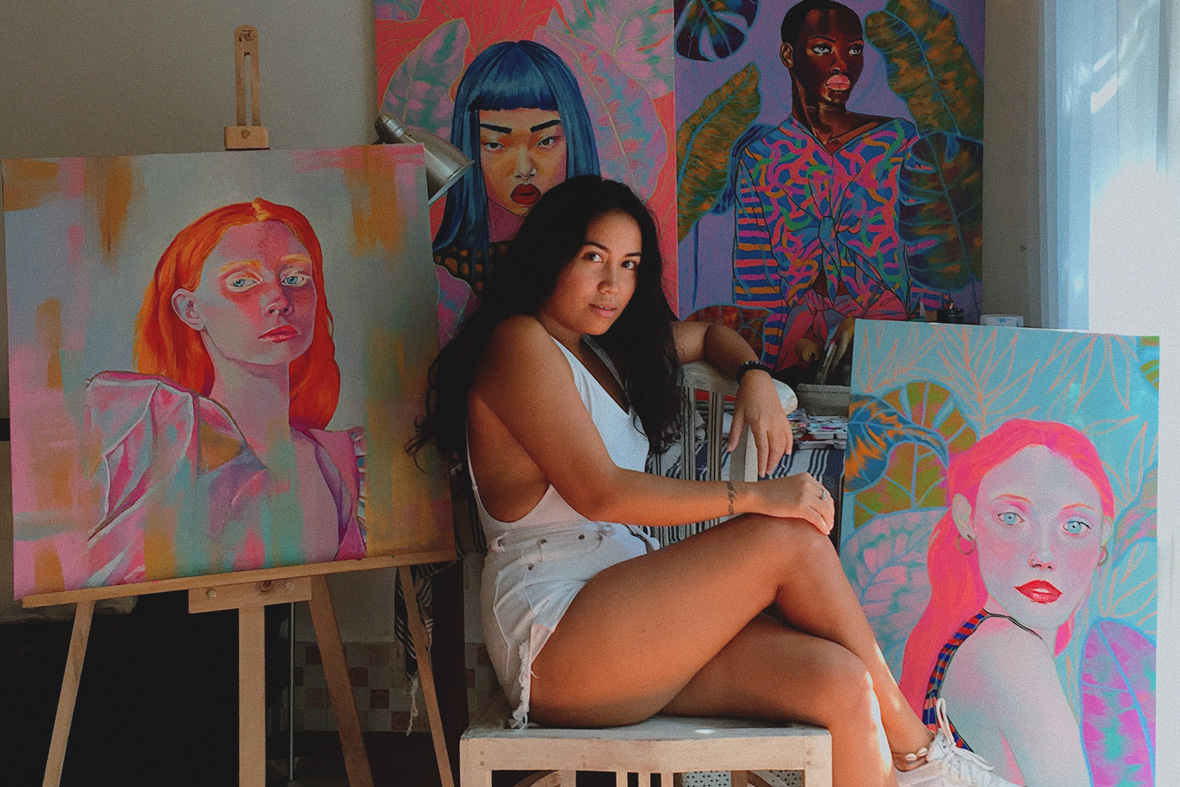 On Instagram, Indonesia-based painter Linkan Palenewen goes by Candylcker—a handle that’s not as innocuous as it seems. “The excitement that a kid experiences when they see candy is much like how an adult reacts to sex,” she says. The primal appeal of sex has long fascinated Palenewen.

For her, sexuality can even be a lens through which she can explore other topics. In Femme Fatale, the first of her works that deal with body positivity, she paints her subjects—often close female friends—in various states of undress. Through her use of vibrant neons, illustrative brushstrokes, and attention to composition, Palenewen’s acrylic stripteases demand the viewers’ undivided attention. 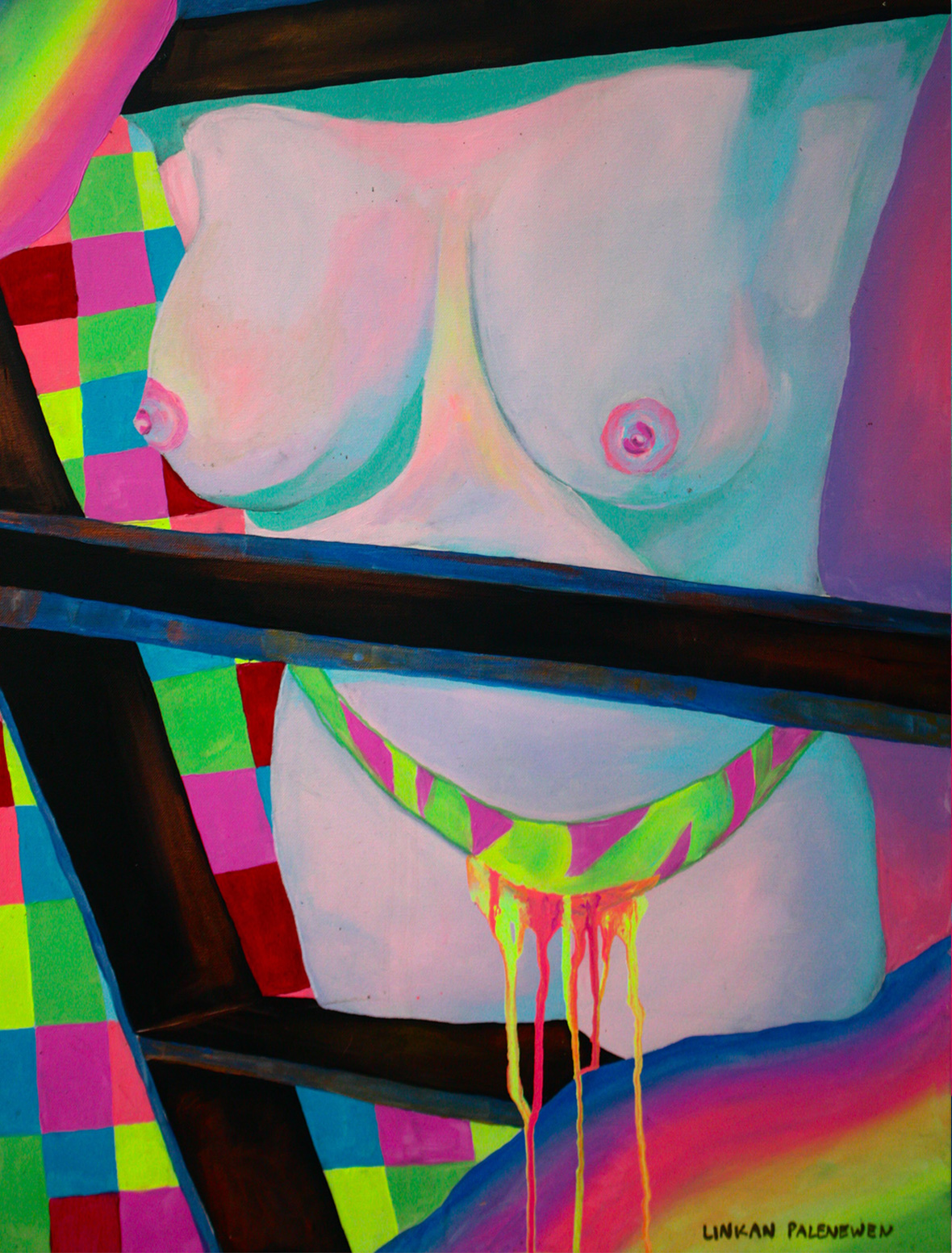 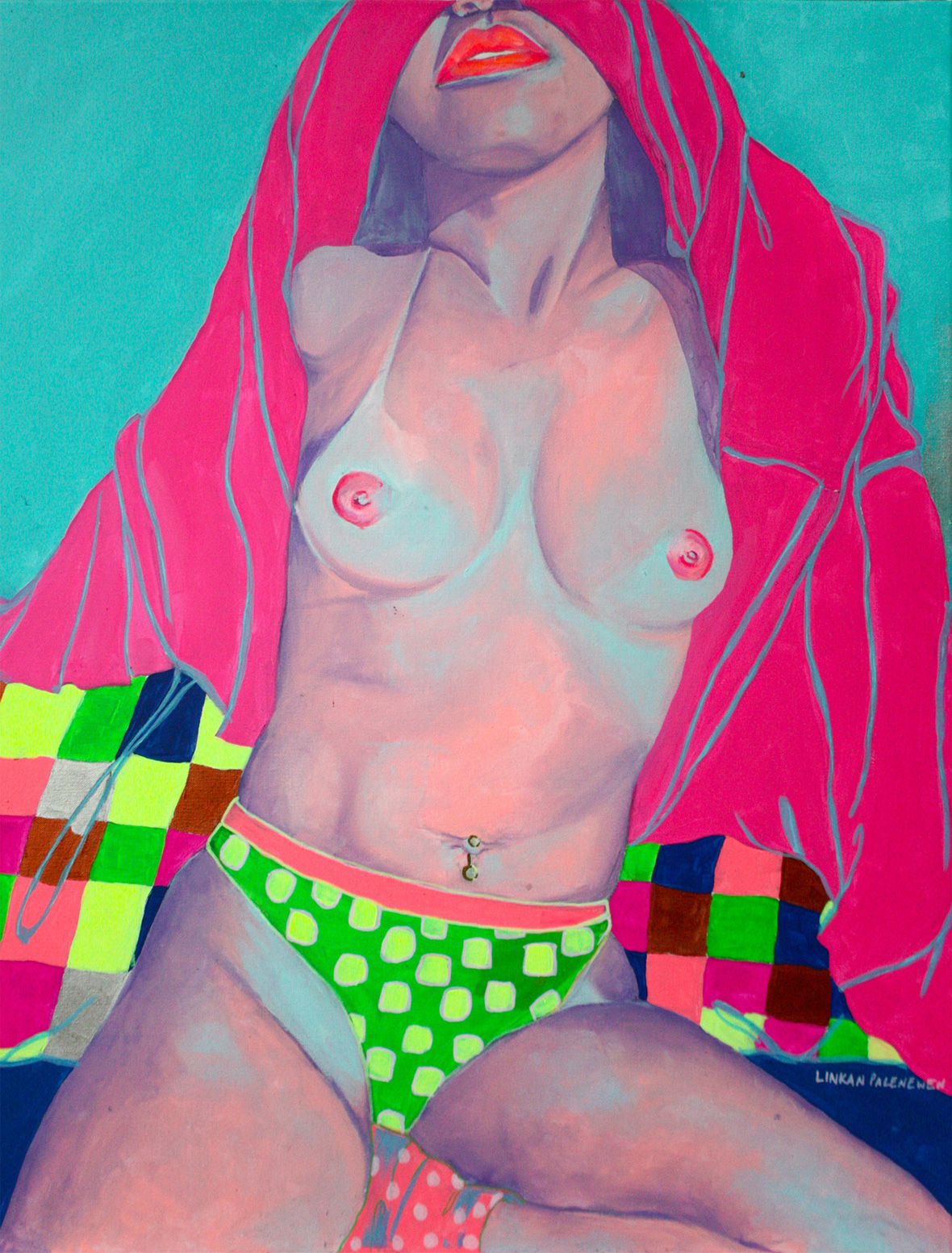 Palenewen believes art shouldn’t only be beautiful, and deeper concepts belie her aesthetically pleasing work.”My colors are vibrant, but people have told me there’s a darkness within my paintings—as if my inner world was a lot less colorful than my art,” she says. These assertions were validated as she continued making art. 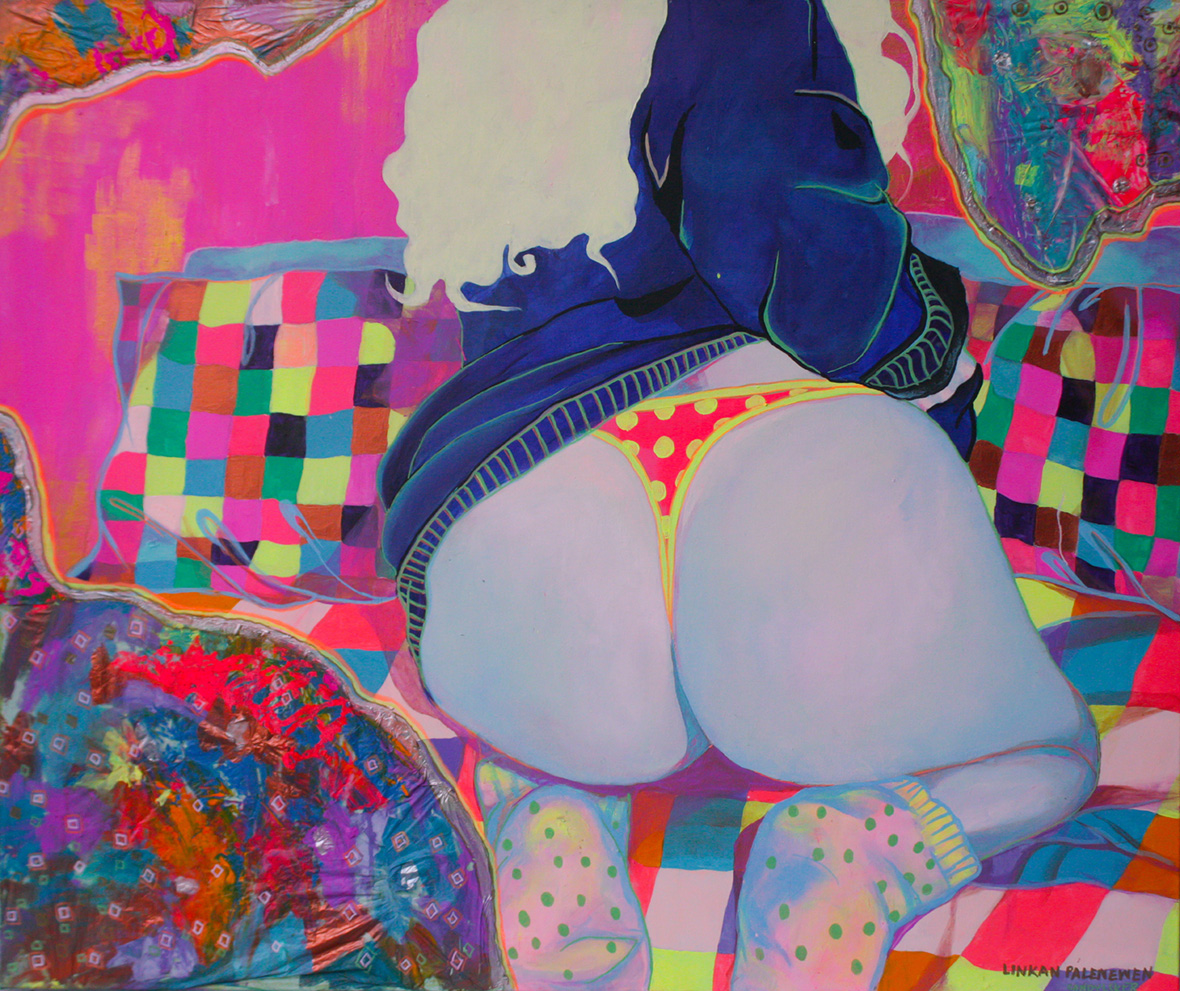 Palenewen’s recently completed series, titled Stigma, was a major creative breakthrough for her. Due to the pandemic, it has yet to be showcased to the public. If her past works are, as she puts it, her way of “documenting love,” then this new series is the exploration of a new form of love: the love of self. This project consists entirely of nude self-portraits, and her hallmark use of neon seems even more pronounced, though they’re tinged with darker hues.

“So much negativity filled my mind while I worked on it,” she recalls. “I started judging myself and feeling discouraged. But I channeled these fears and dark thoughts into the art. To me, this series is a proclamation: women who want to express themselves shouldn’t be shamed by society, even if it’s a taboo subject like their sexual needs. The embarrassment I felt while painting my own nude body attests to the necessity of this series.” 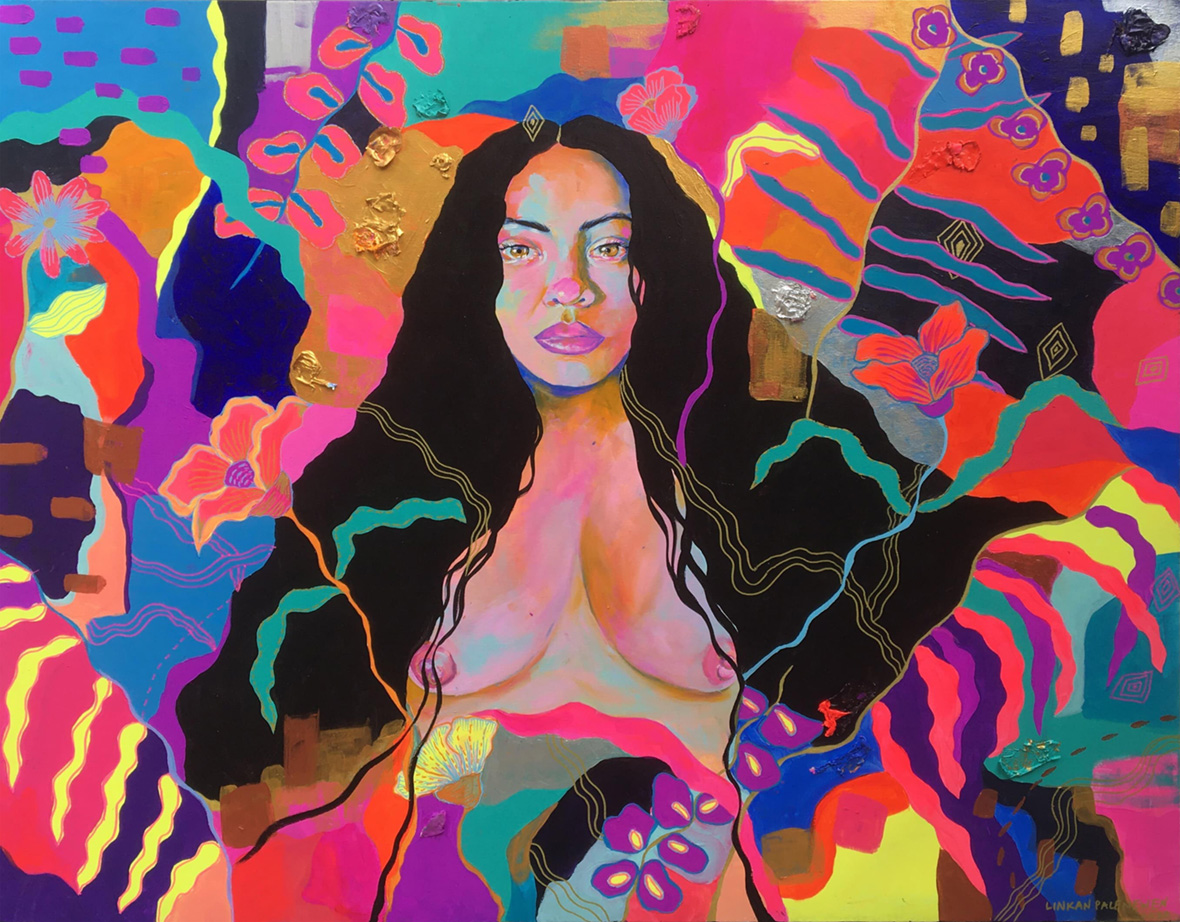 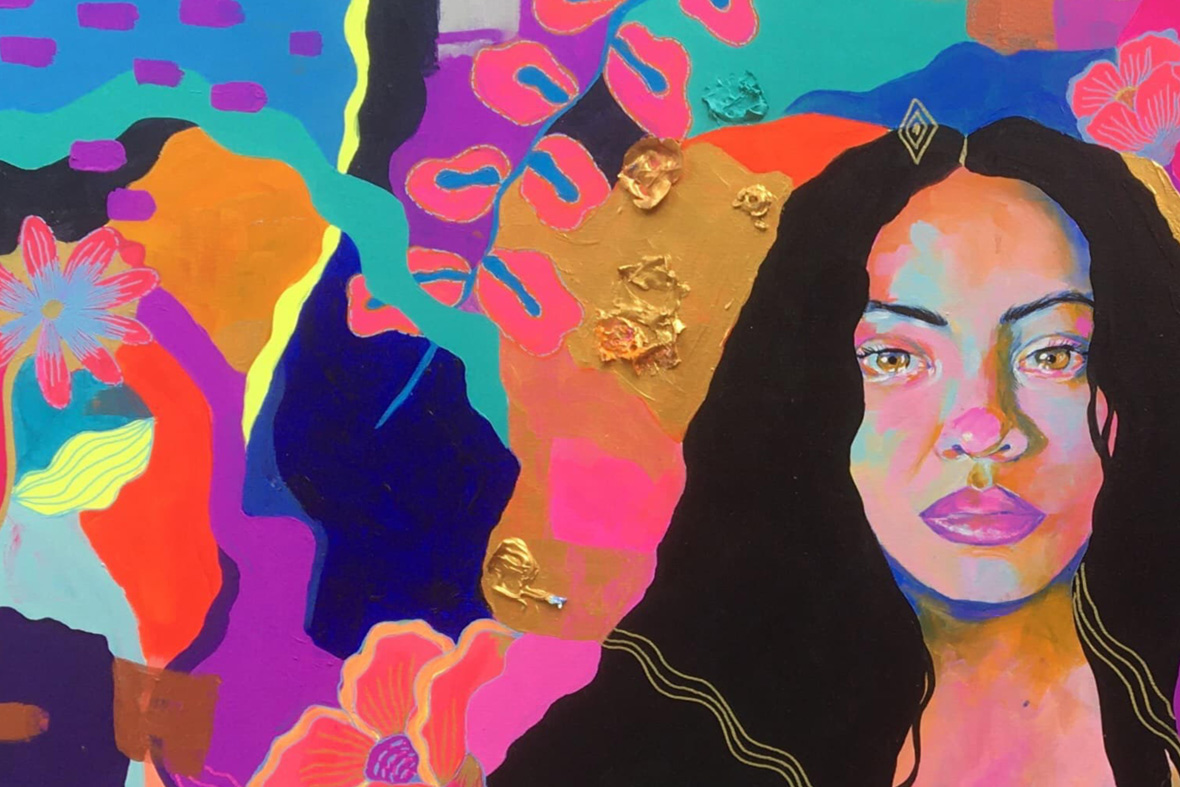 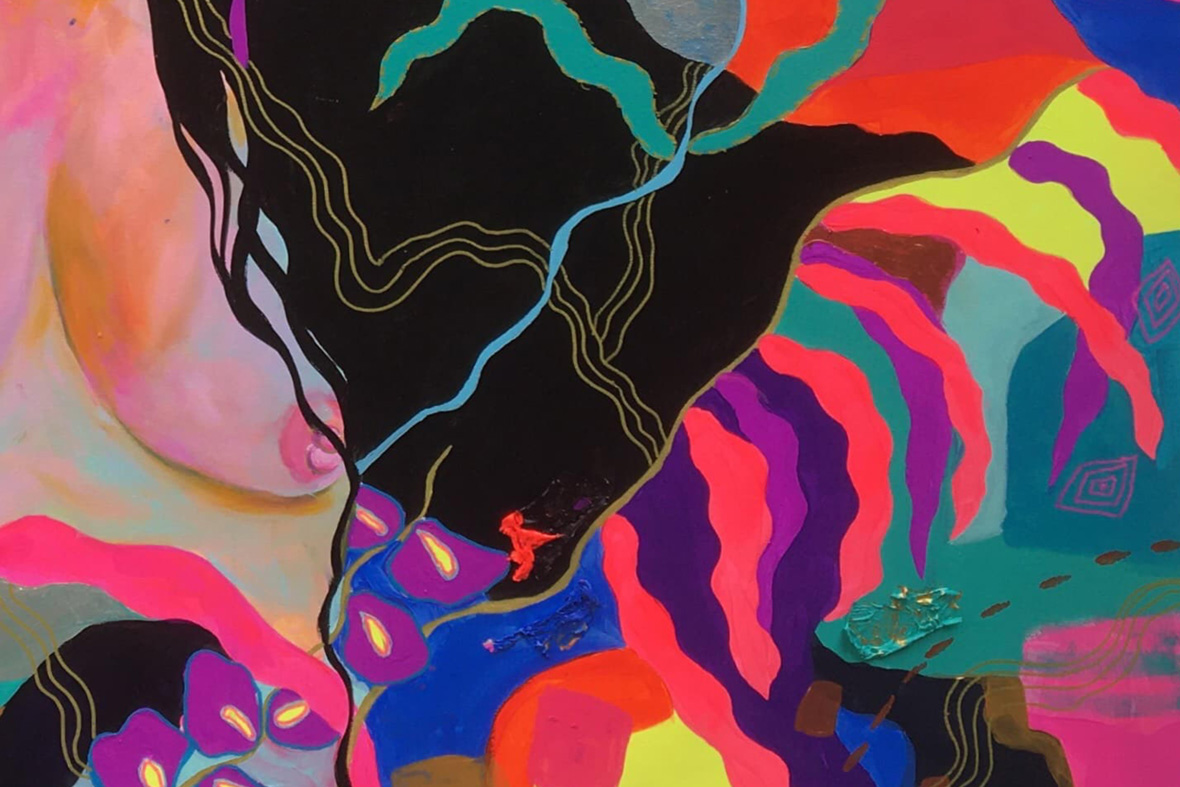 Experienced artists are accustomed to the introspective nature of creating art. But for Palenewen, a budding artist, it was a surprising confrontation with shame. This awareness of her own insecurities was liberating, and her embrace of this discomfort instill her works with a sense of candid honesty.

On a humid afternoon, we met up with Palenewen in Bali’s Joshua District, where pieces from Femme Fatale are still on display. We sat with her and shot the breeze about creativity, femininity, and everything else under the sun. 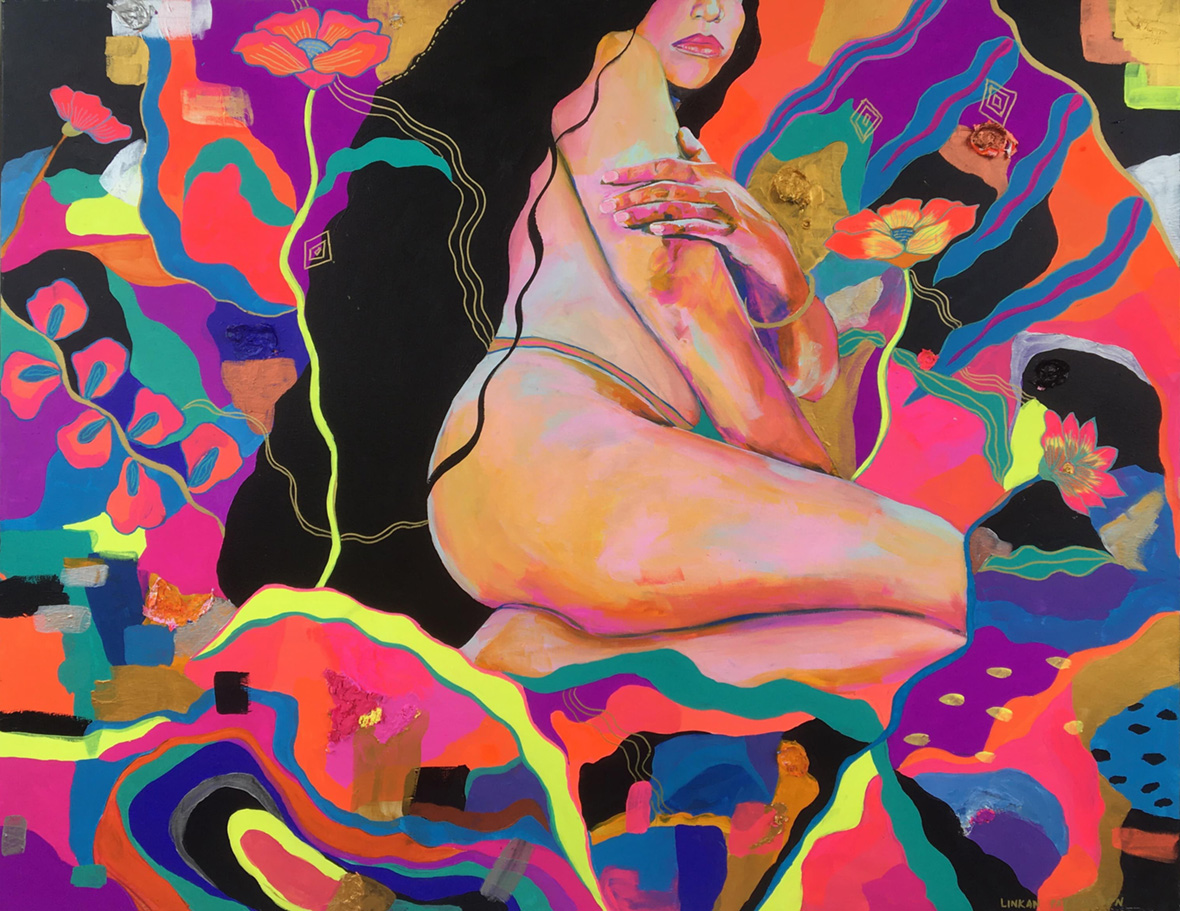 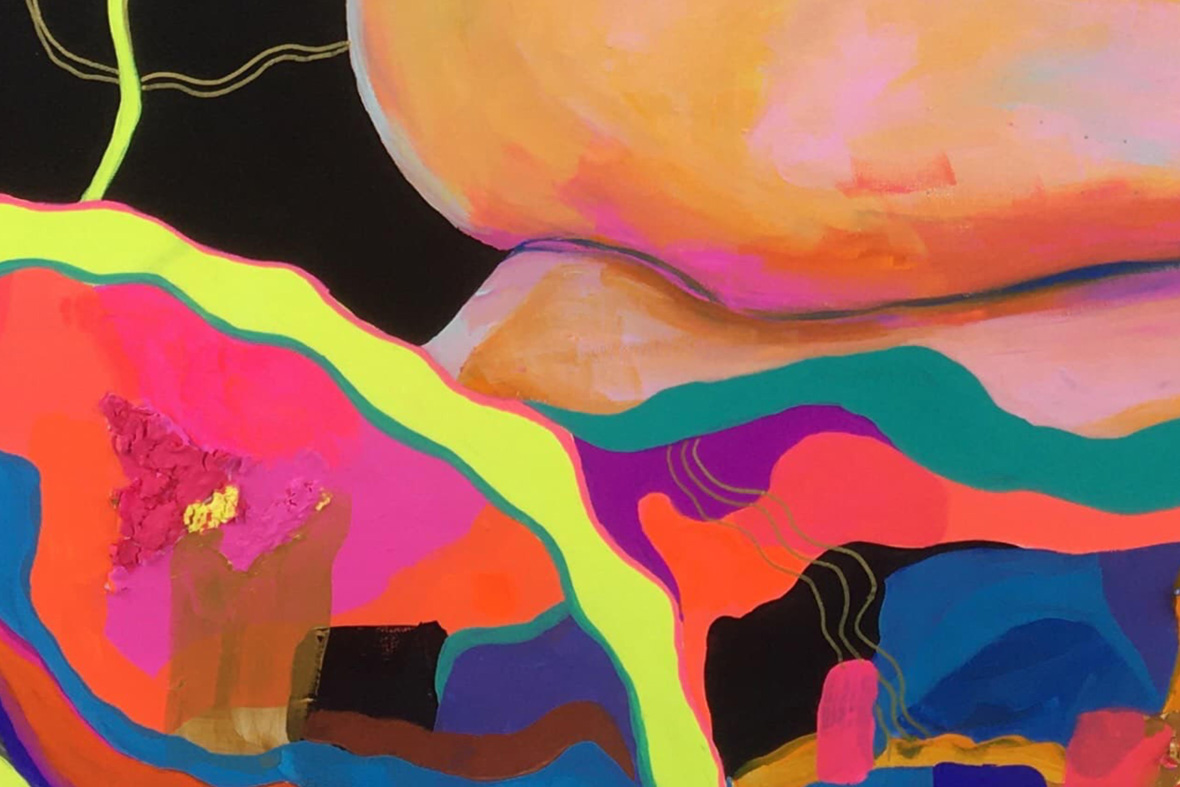 Neocha: Can you introduce yourself? What did you do before coming to Bali?

Palenewen: In Jakarta, I studied fashion design at university and settled in Bali after graduating. Jakarta felt too limiting to me, while Bali felt freer and much more diverse. 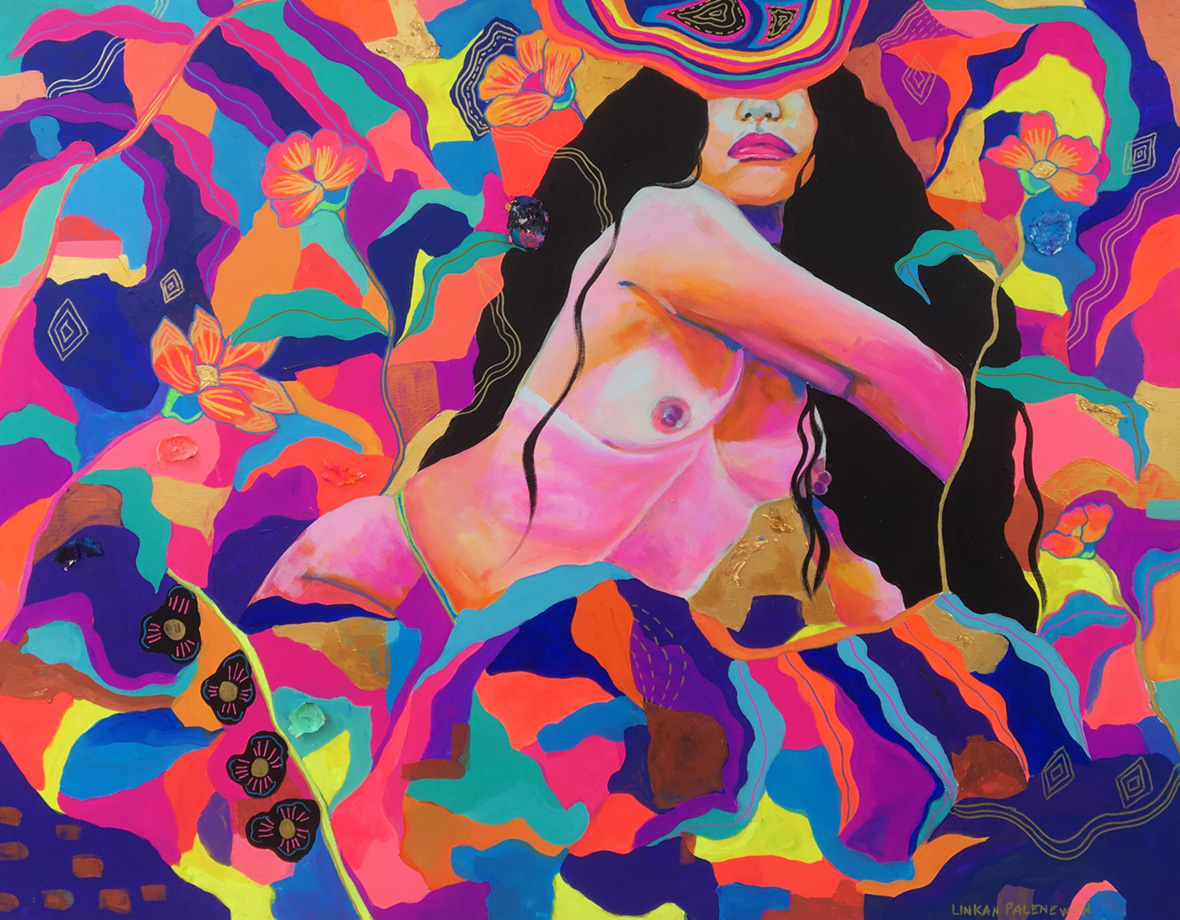 Neocha: You mentioned that you studied fashion design in school, so how did you get into art?

Palenewen: I actually started out studying interior design, but I’ve always wanted to make art, but I didn’t know how I could have a career if I only studied art. I ended up switching my major to fashion design—it was the most ‘artistic’ job I could think of. I learned a lot of technique while studying fashion design, and I developed my own style from thatt. 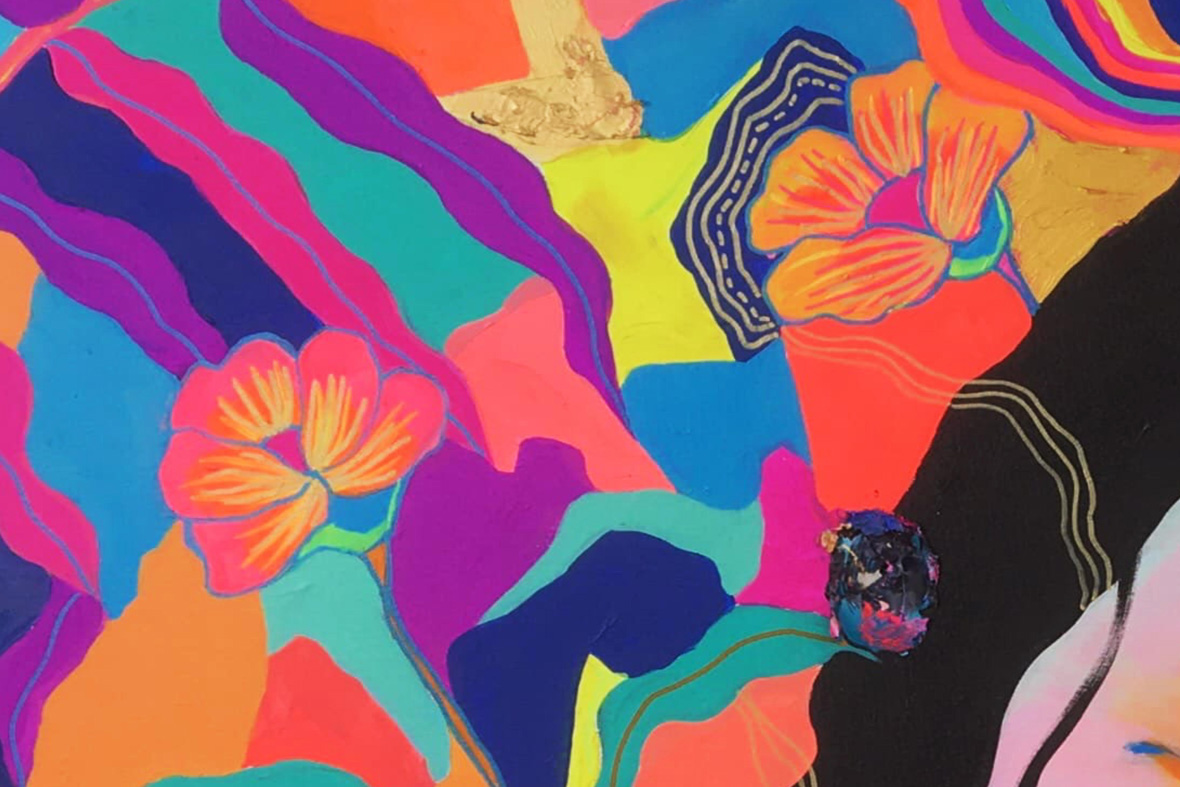 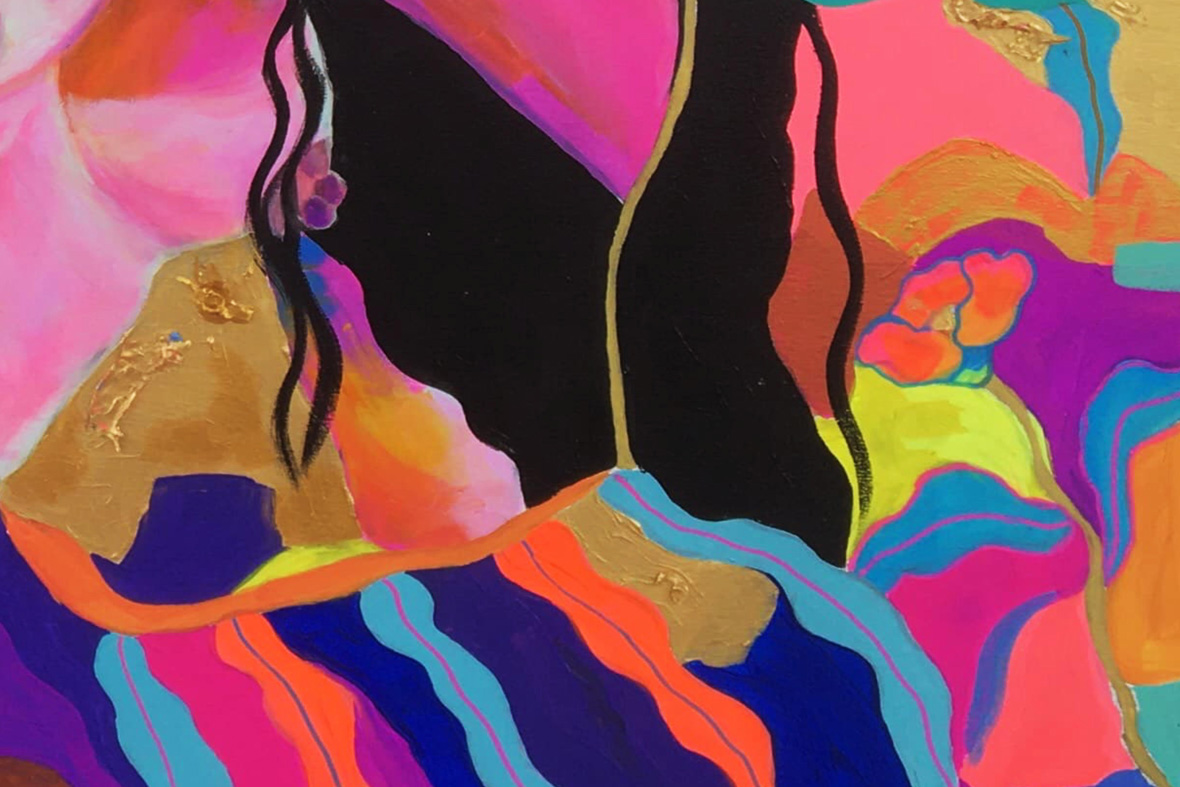 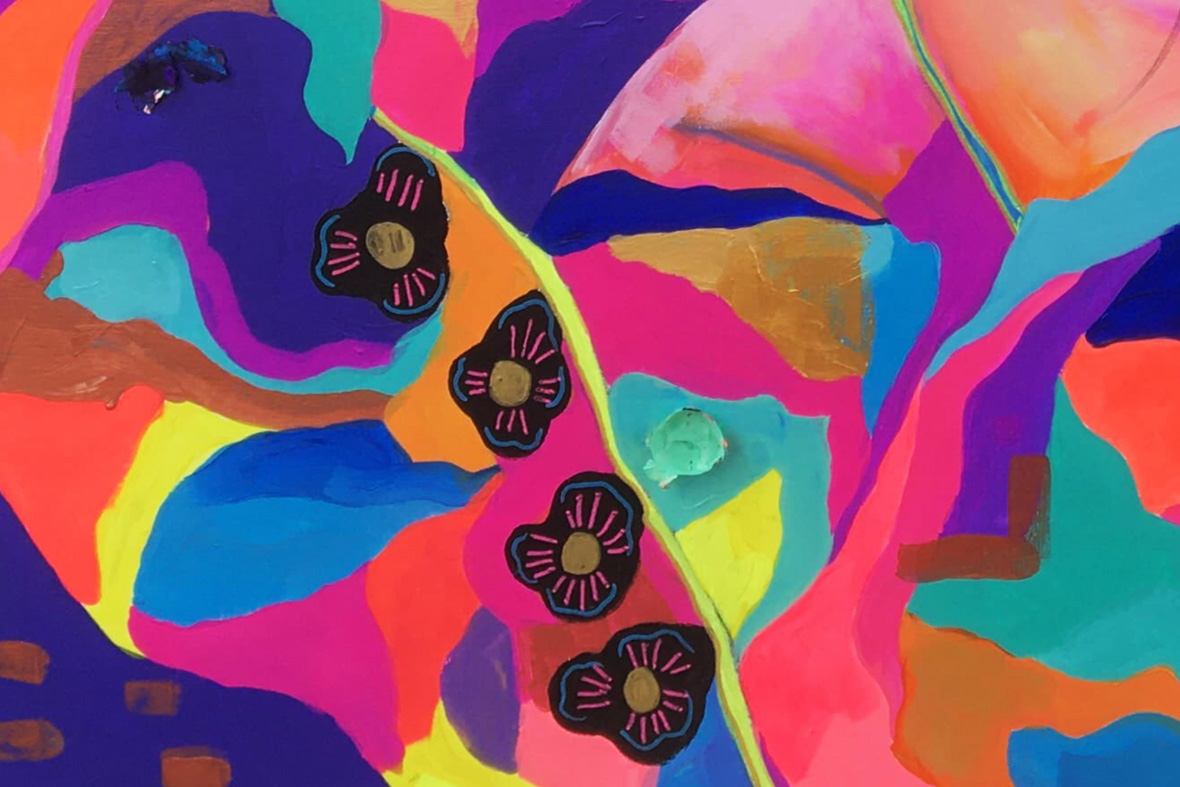 Neocha: Can you talk us through the concepts behind Femme Fatale and how it’s tied to Stigma?

Palenewen: As a woman, I am more or less inspired by other women, especially those in my life. Femme Fatale was created to uplift my close friends, the women that inspire me. I wanted to encourage them to be more comfortable in their own skin. One night I did a live painting of one of Femme Fatale and I invited all of my friends to come and to experience for themselves how people see and react to the paintings. My hope was that the audiences’ positive energy can help them better recognize their beauty. The idea for Stigma came because it like I was being a hypocrite by not putting my own body out there. 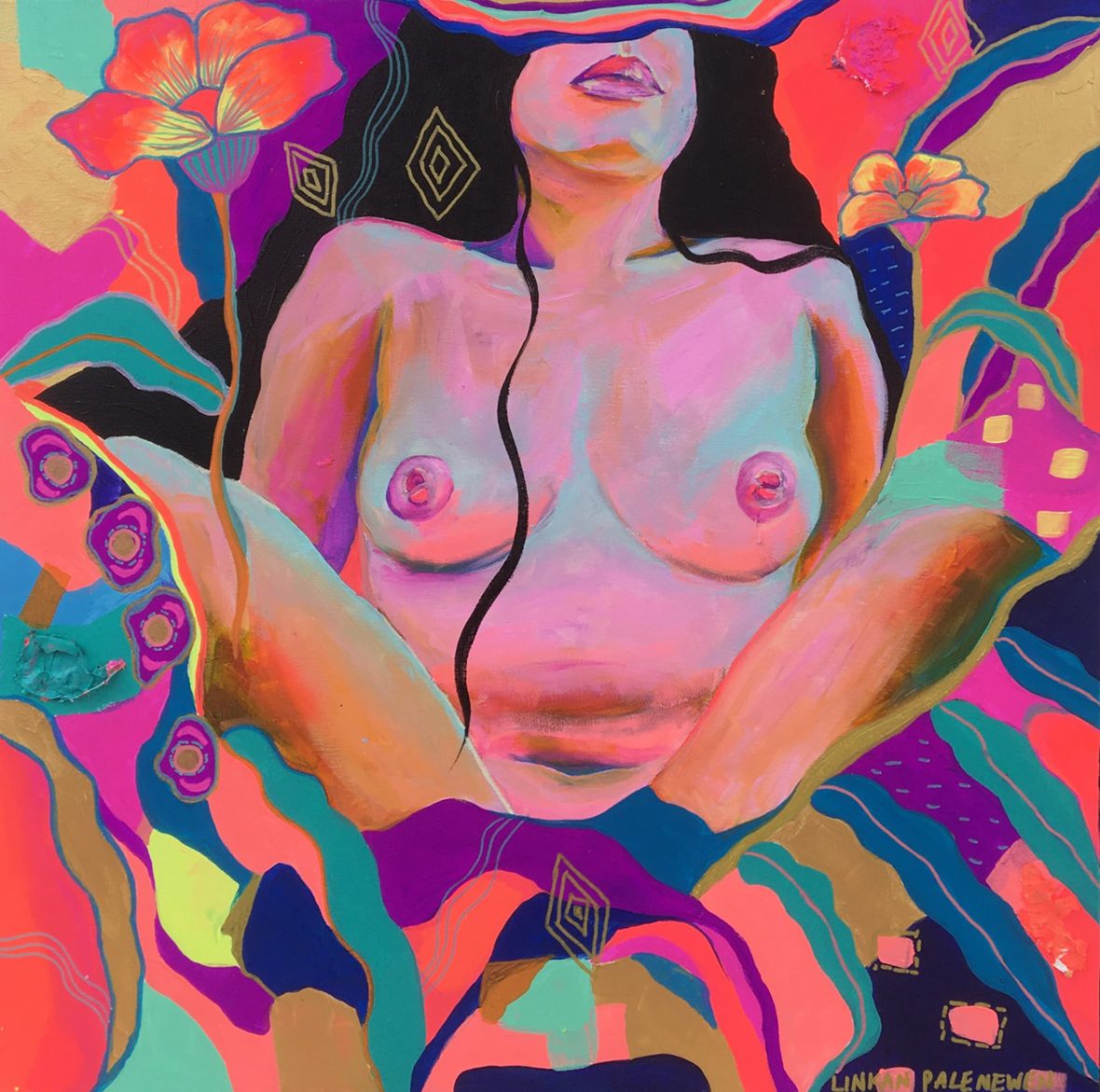 Neocha: To you, what is the significance of Stigma?

Palenewen: Stigma was not the first title that came to mind actually. I originally named the series The Garden Of Eve. The idea was to create art that could show my ‘world’ with full transparency, expose the vulnerable side of me as a woman, and how the world influences my idea of femininity. But during the process, the series became more personal. It brought feelings that I hadn’t yet experienced before in my art. Little did I realize, I was shackled by stigmas that have been there the entire time, stigmas that exist because I’m a woman. The prospect of finishing the series was terrifying.

The word “stigma” is forever a part of a woman’s life. Negative stereotypes have been given to women since ancient times. The term stigma has negative connotations, but funny enough, stigma is also the name for the part of a flower that receives the pollen during pollination. The stigma is what helps a flower grow. Stigma, as a series, has helped me grow as an artist and a woman. 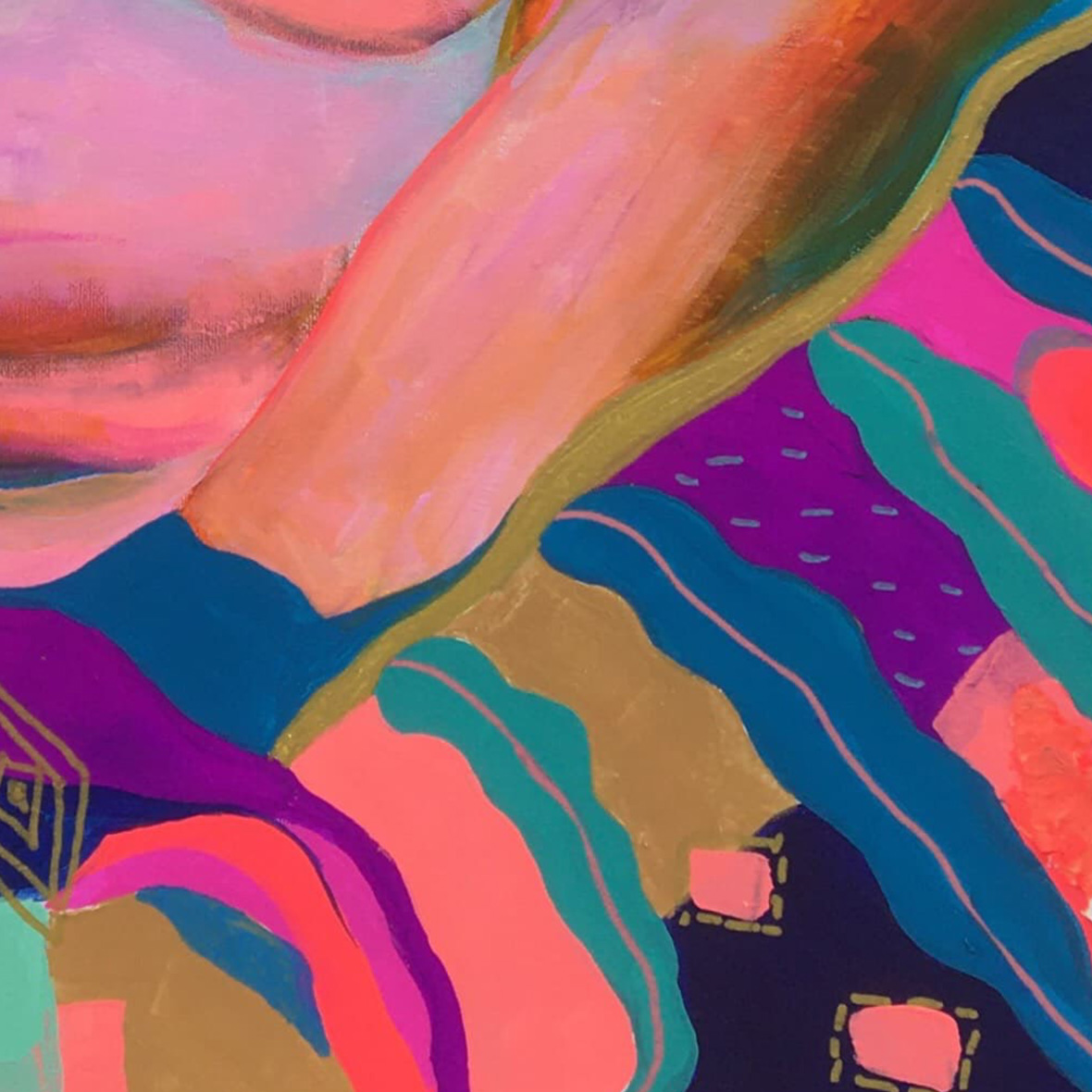 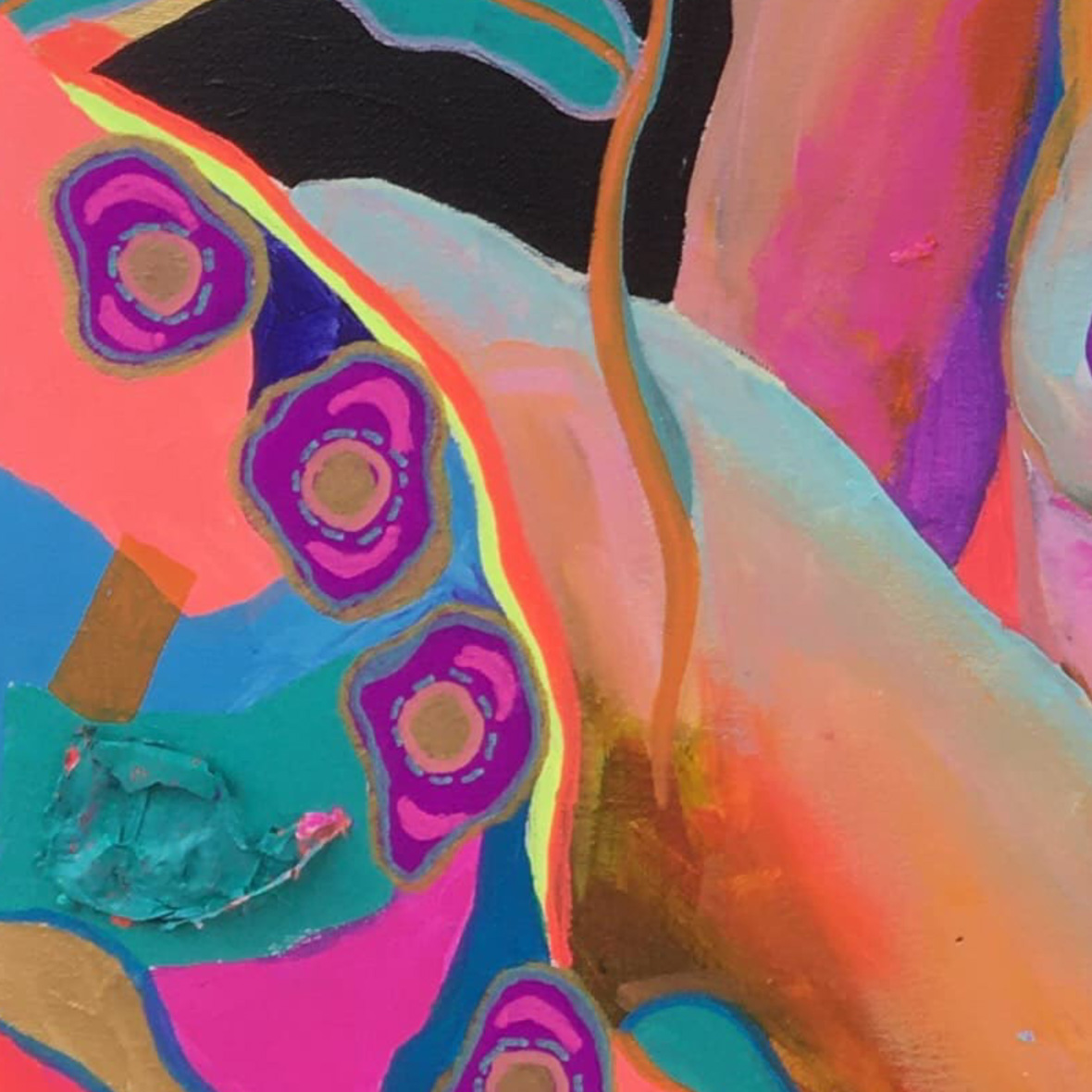 Neocha: The fortitude required to push past the self-doubt you felt is inspiring. What gave you strength?

Palenewen: The friends who were willing to model for Femme Fatale were my biggest inspiration when I was stuck. I feel the need to be in their shoes, to be as brave as them. But as people say, “It’s easier said than done.”

The shame and doubt I felt was tough to process, but a friend told me that being an artist isn’t easy and nor should it be. He said that the emotions I was experiencing means I’m on the right path. His words of encouragement and faith in me were tremendously uplifting. 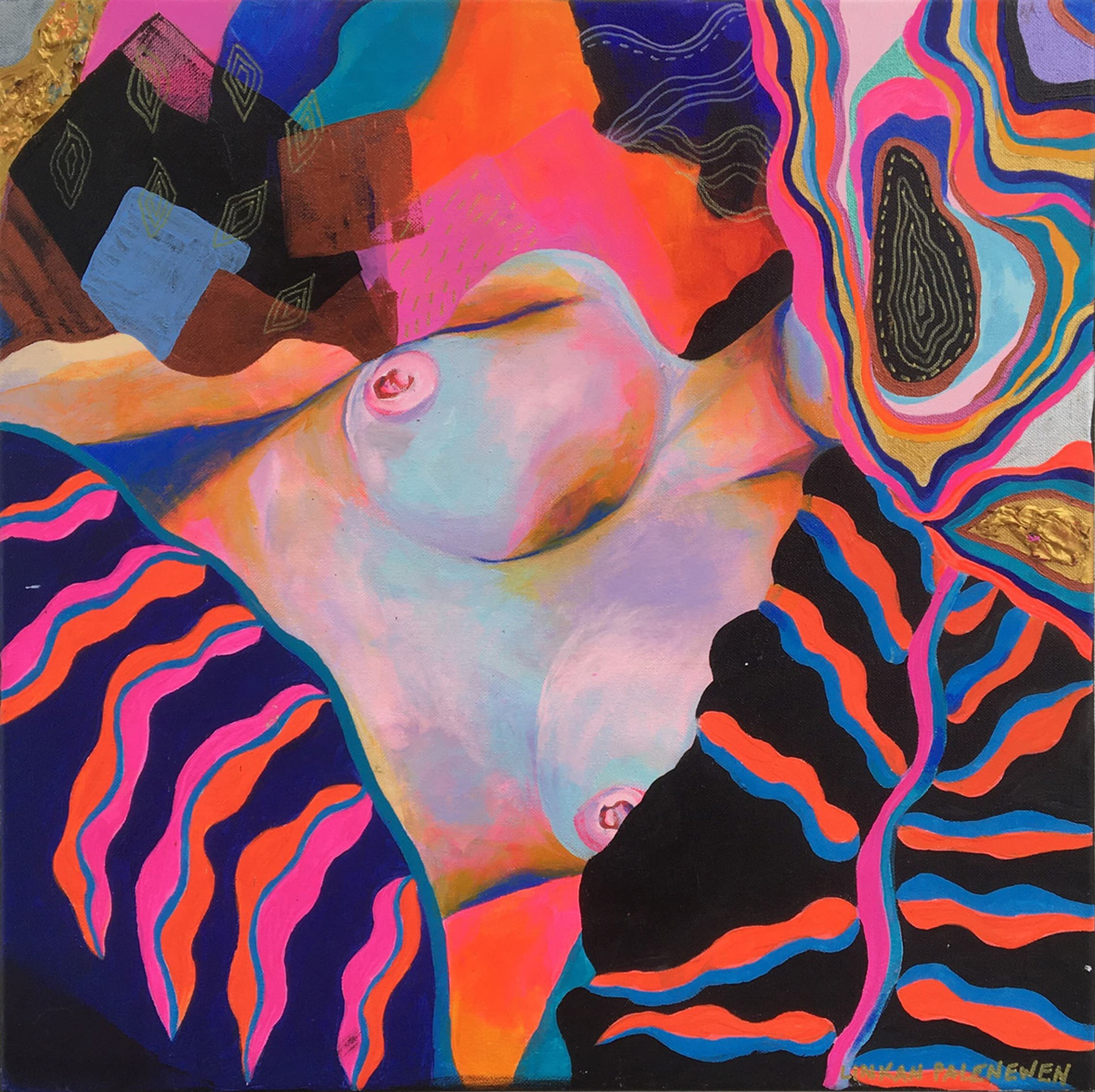 Neocha: Considering the nature of your work, do you think of yourself as a feminist artist?

Palenewen: As a woman from a country that’s long been ruled by patriarchal ideologies, my means of self-expression are inherently limited by culture and religion. I use art as a platform to invite conversation on any topic that may seem taboo. Through art, I feel free to be myself, a woman. So yes, I do consider myself as a feminist artist.