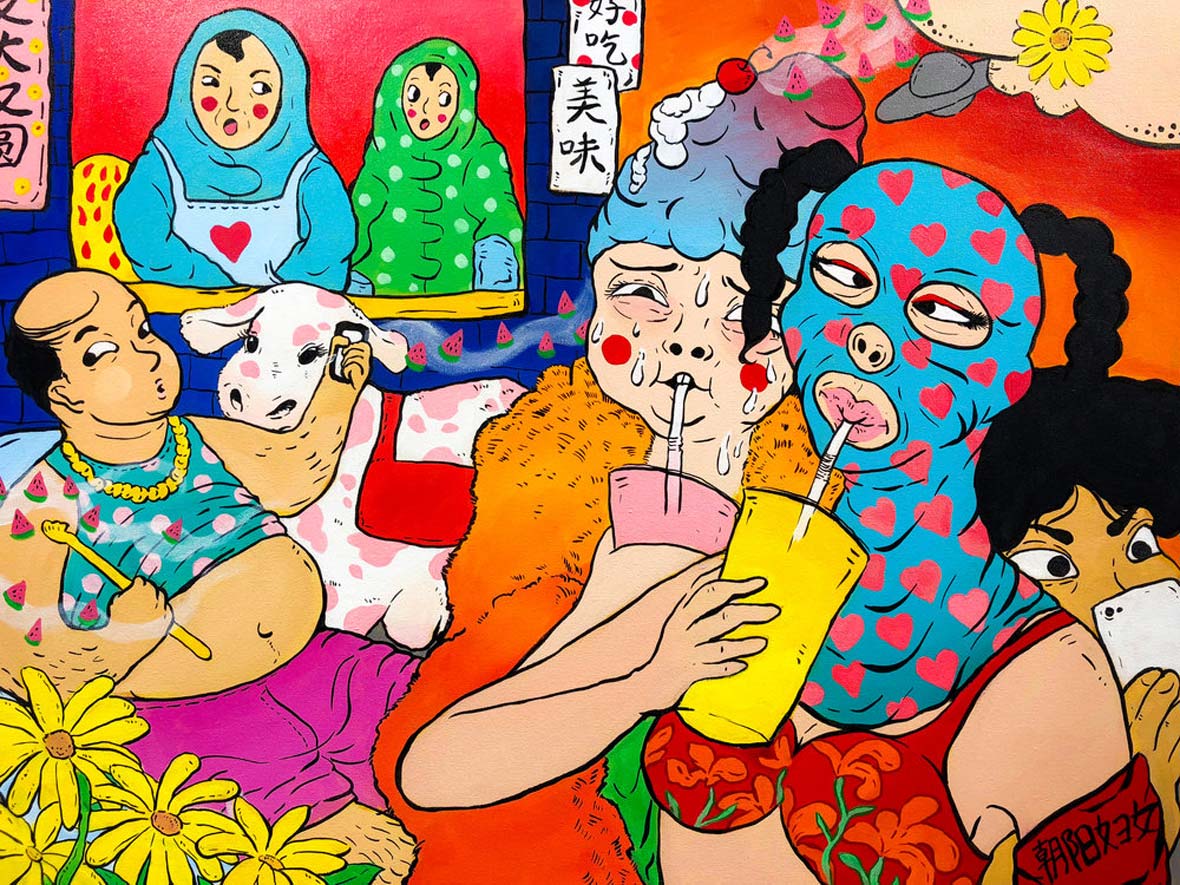 Horror, despair—and facekinis. Welcome to the mind of Du Qiurui, a painter and illustrator who has been offering an unusual perspective on the fast-changing landscape of China. Du uses bright colors and thick lines to portray ordinary people in overcrowded scenes, together with disturbing objects and terrifying demons. His paintings represent the underlying tensions of modern Chinese society in a convoluted way, with aspects of dark humor.

Du was born in Beijing in the early 1990s to a single mother, the CEO of a design firm who worked around the clock. She’d occasionally travel abroad for work, bringing him along to see new places. Mostly, though, Du was raised by his grandmother, listening to her extraordinary stories. As an introverted child, he relied on these stories, as well as comic books and movies, to keep him company. “My childhood was a combination of reality and fantasy,” he recalls, “I built an imaginary world for myself.” 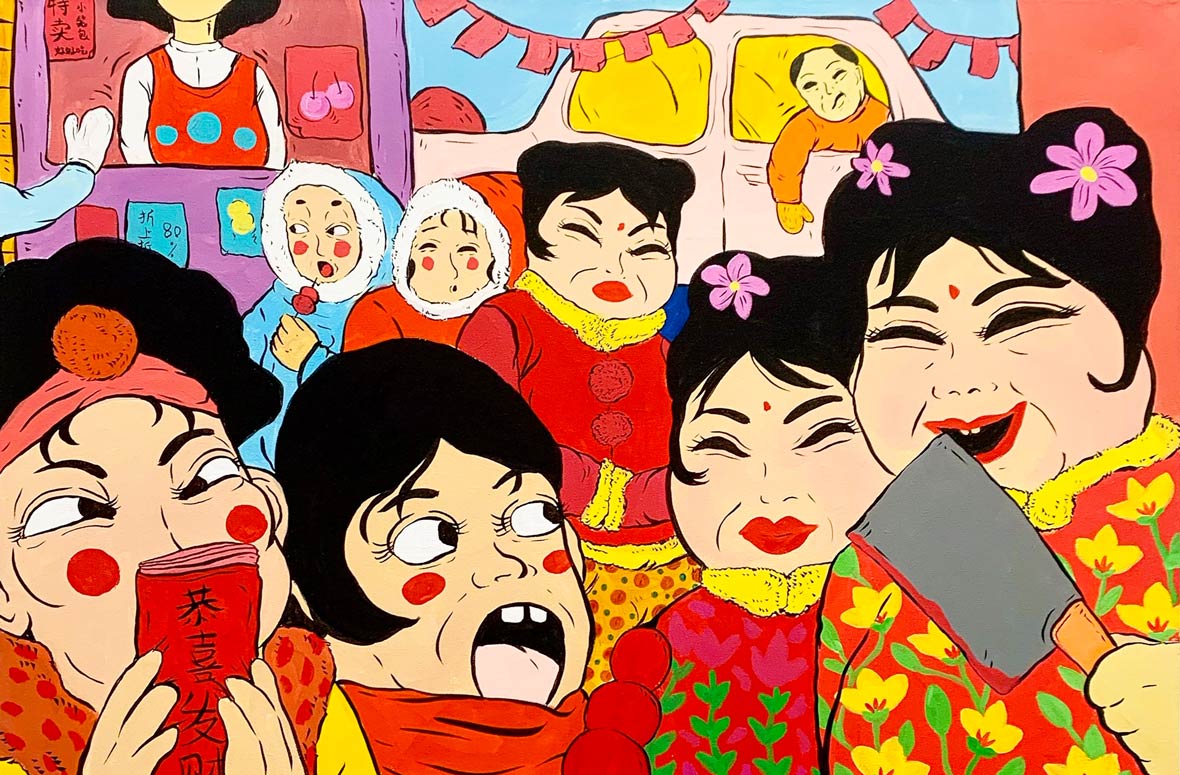 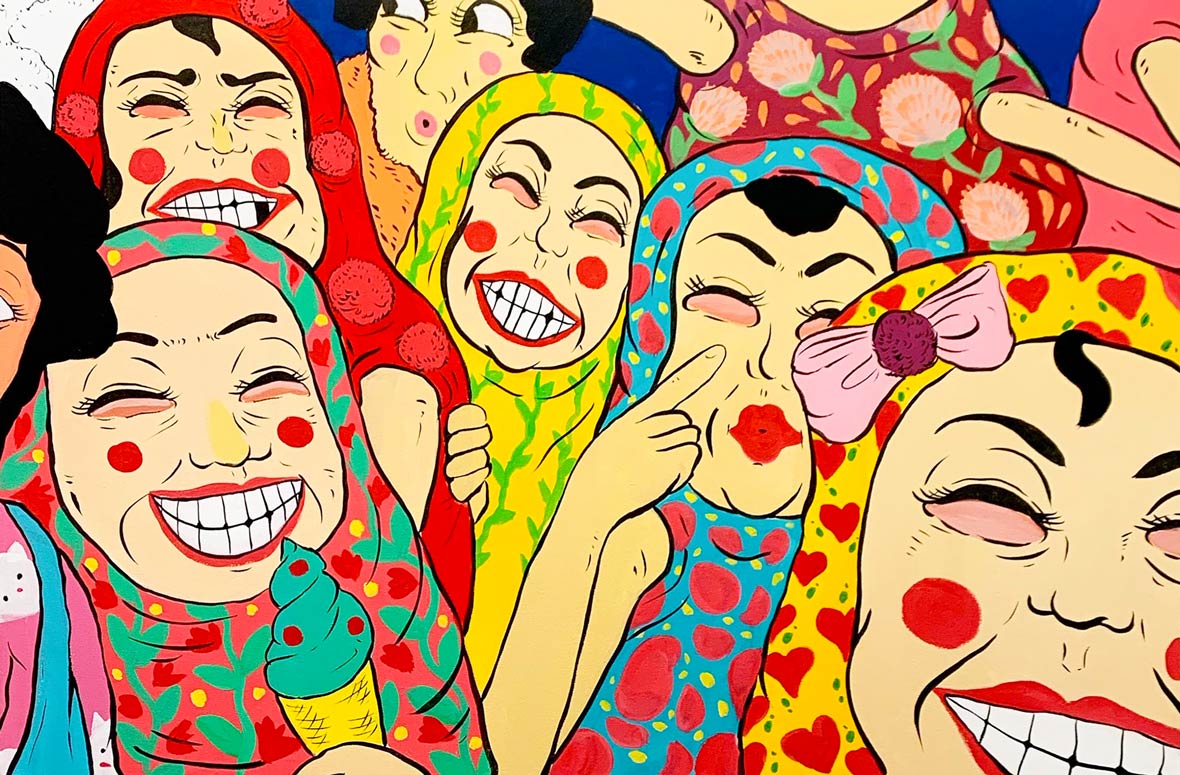 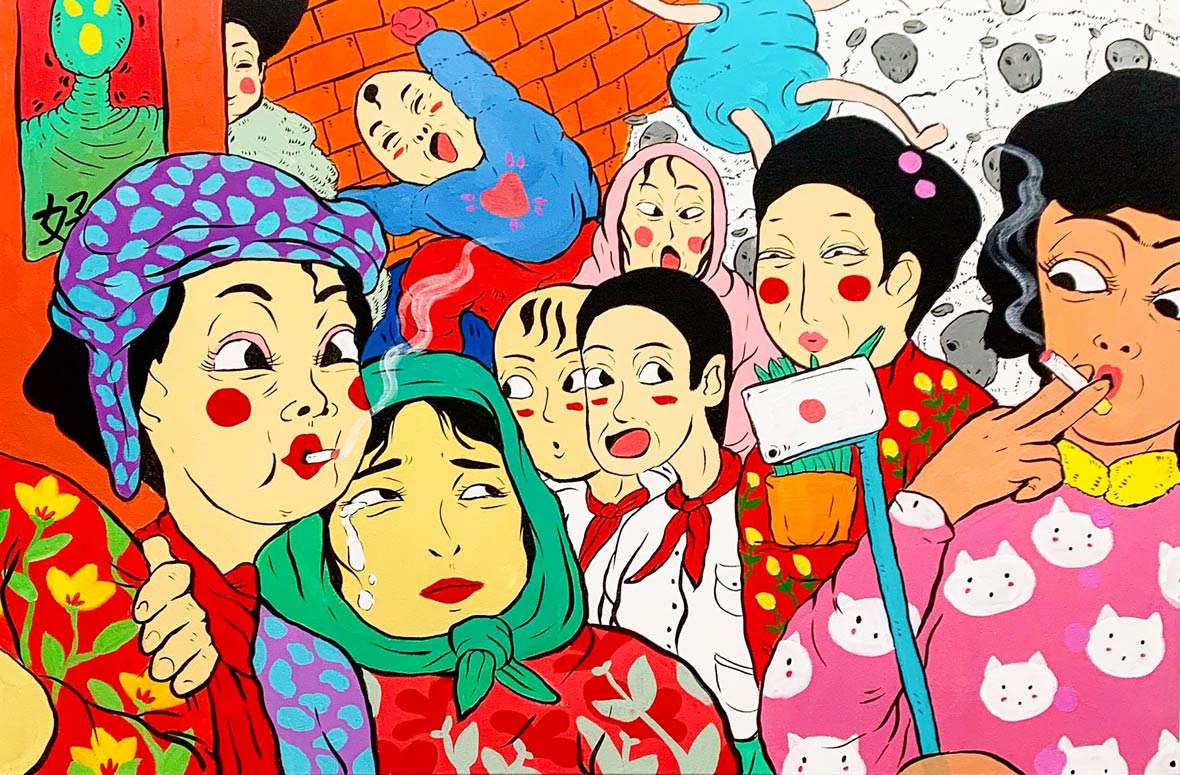 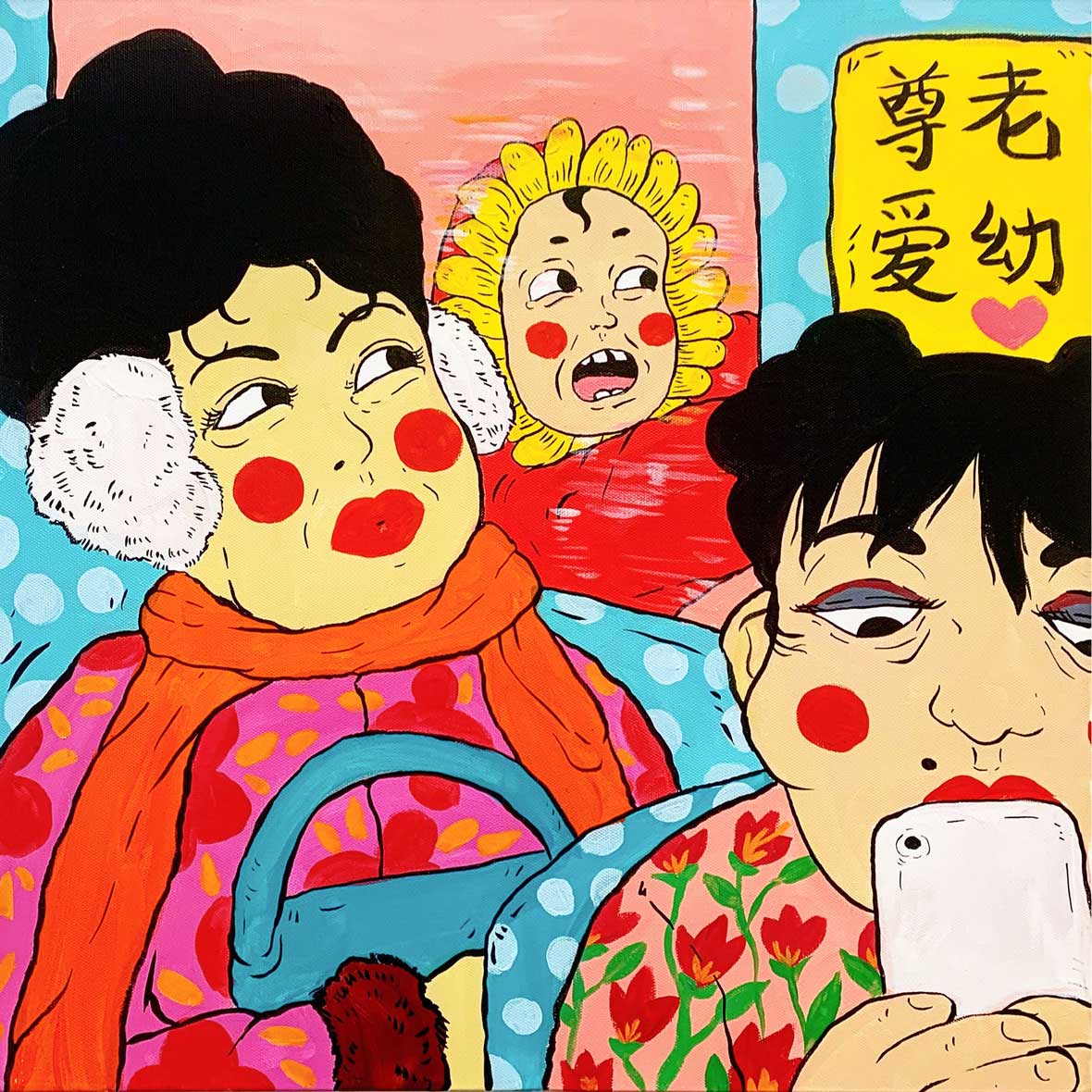 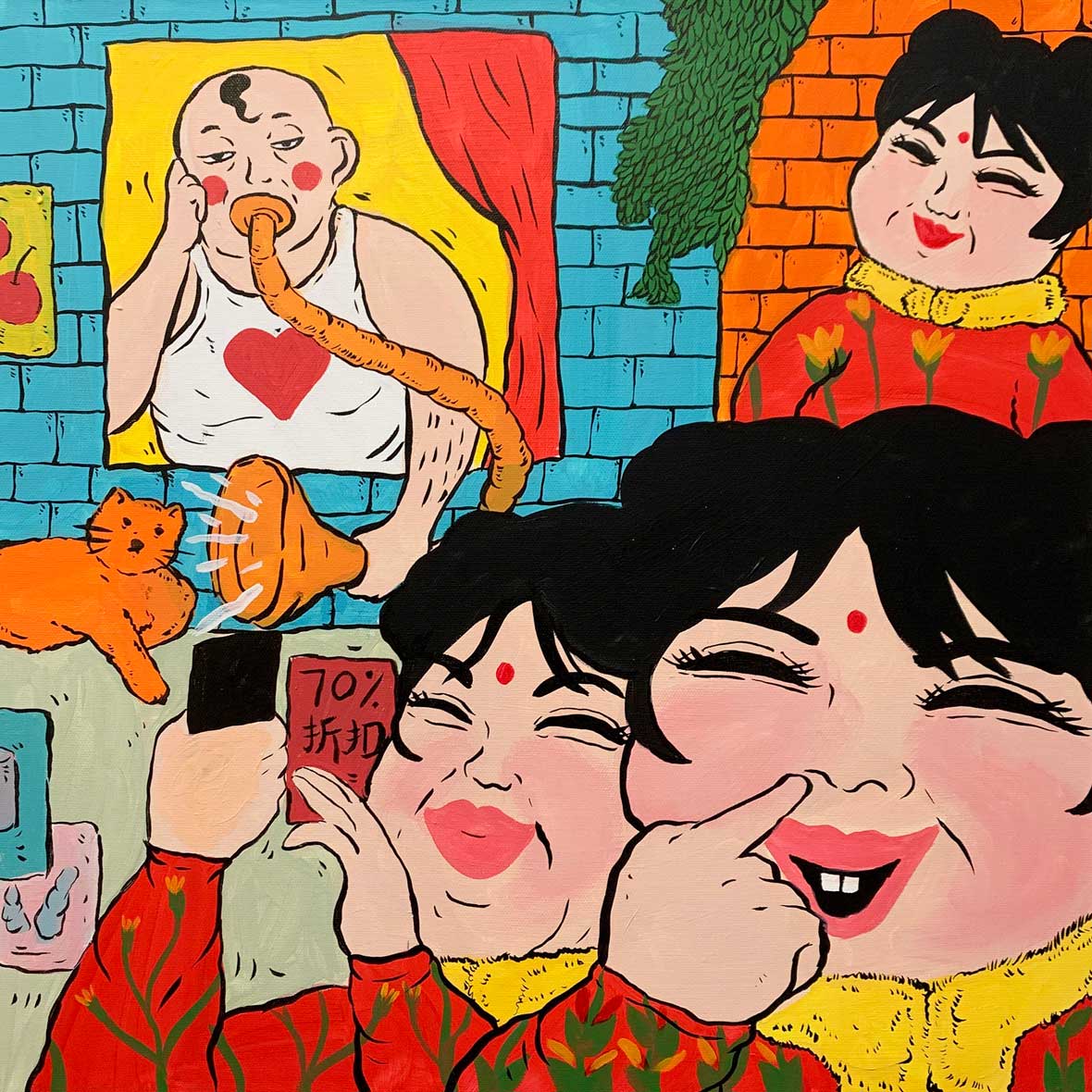 As a young adult, Du moved to New York City, motivated by his artistic aspirations and by mainstream media. He went there to experience the local art scene and to study at The Parsons School of Design. While there, his style became heavily influenced by Western comics and noir, until one of his professors, the acclaimed Taiwanese painter Mu Pan, encouraged him to turn his attention inward. Du then started to view his childhood and his hometown in a new light.

Du has lived his whole life against the backdrop of China’s dizzying economic development. His hometown, Beijing, has been thoroughly transformed, and each time he returns he finds a new skyscraper going up or another hutong torn down. Landmarks from his childhood now exist only in memory, while new technology has opened up new views of the world. Yet, some things have remained the same: society is still very controlled, hierarchical, and conservative. “As a kid born in the ’90s, I want people from my generation to see my works and think: I know that, I experienced that, I understand that,” says Du. His work became a way for him to connect to his generation. 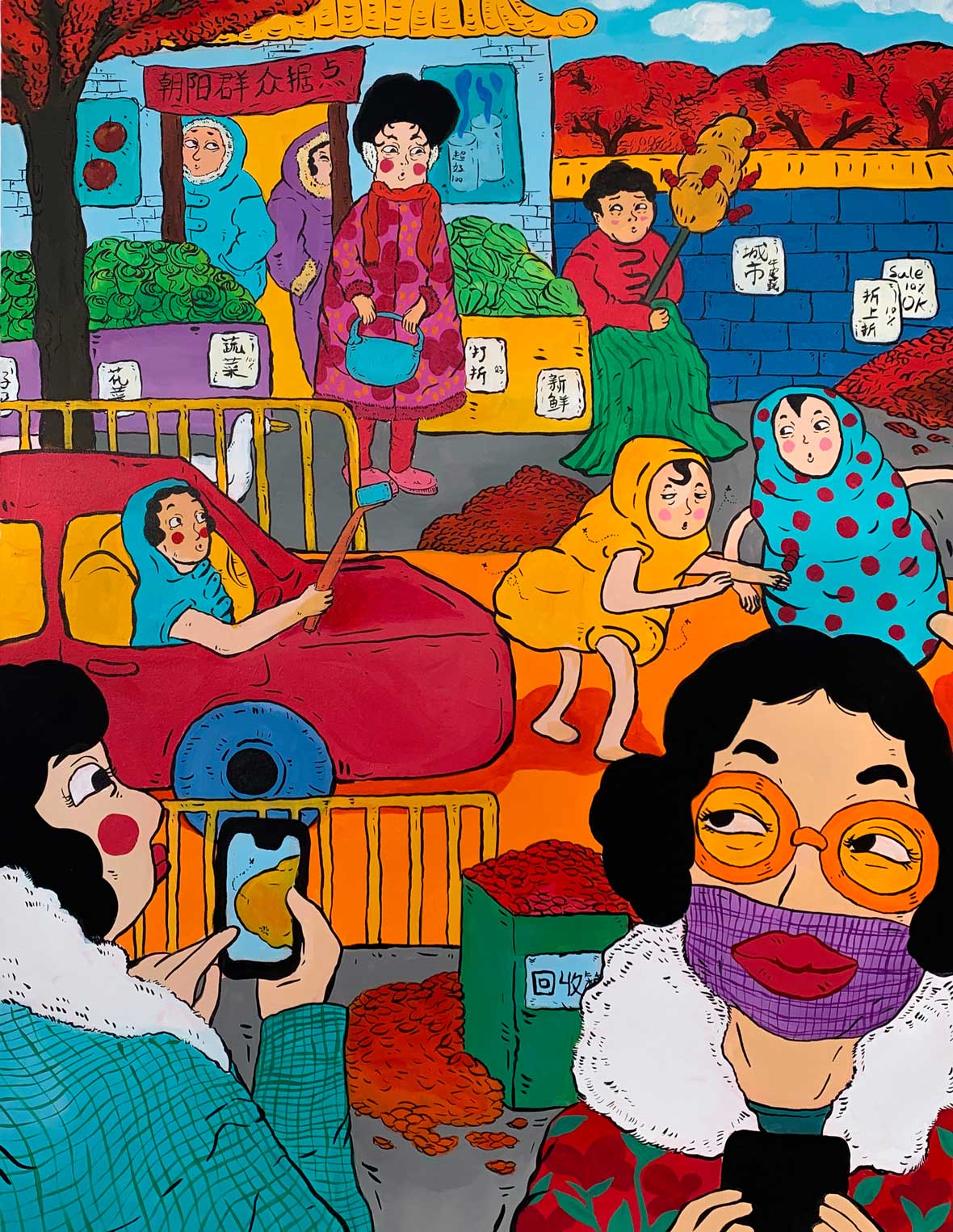 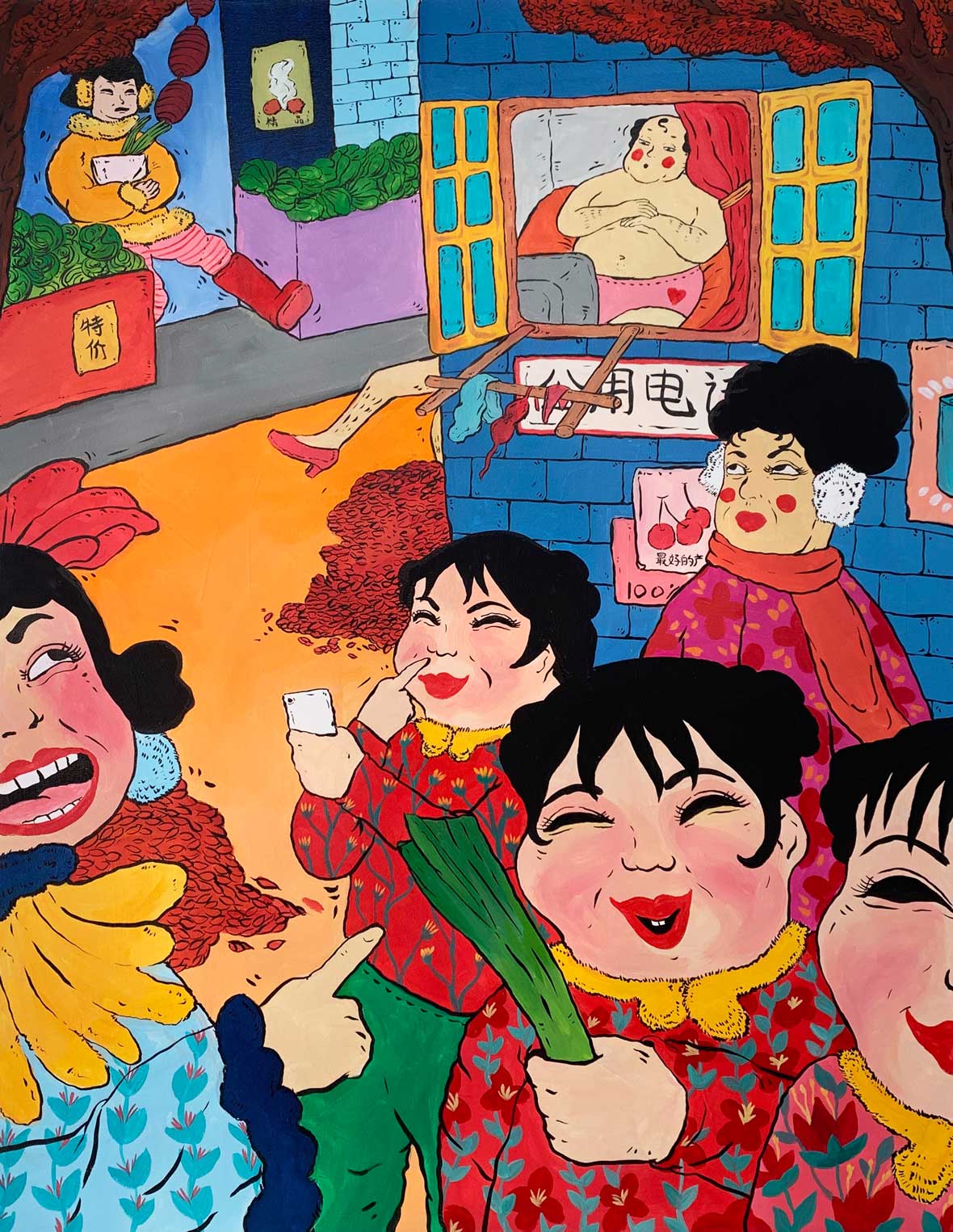 In his latest series of paintings, A Bizarre World, Du depicts busy urban scenes with ordinary people expressing strong emotions: anger, fear, boredom, joy. Some of them are fixated on mobile phones; others are using disturbing accessories, such as facekinis (basically swimsuit balaclavas). “In the West, people think facekinis are really creepy, but Chinese women wear them because they don’t want to get tanned. I think that’s hilarious!” Du likes to explore the contrasts between east and west, and tradition and modernity, to create striking juxtapositions in his work. 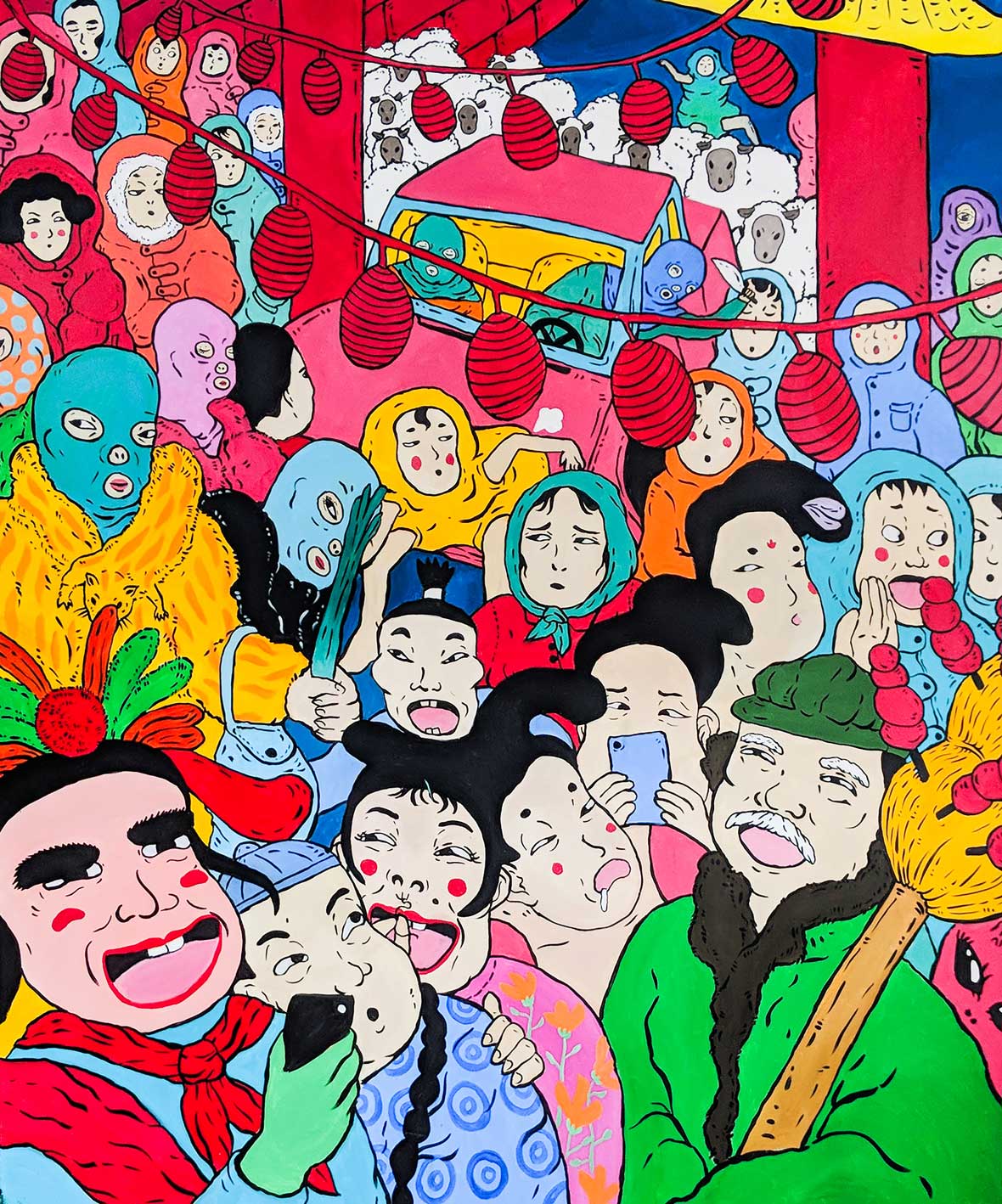 The most bizarre elements, such as green goblins and people-eating monsters, are oblique metaphors for the anxieties and fears of China’s twenty-somethings. Growing up in a confusing, contradictory world, this generation sometimes feels a stronger connection to people from elsewhere than to their own country. China can seem like a weird and nonsensical land. Du is also confused, and he often wonders: “Is it China that’s changed, or just me?” 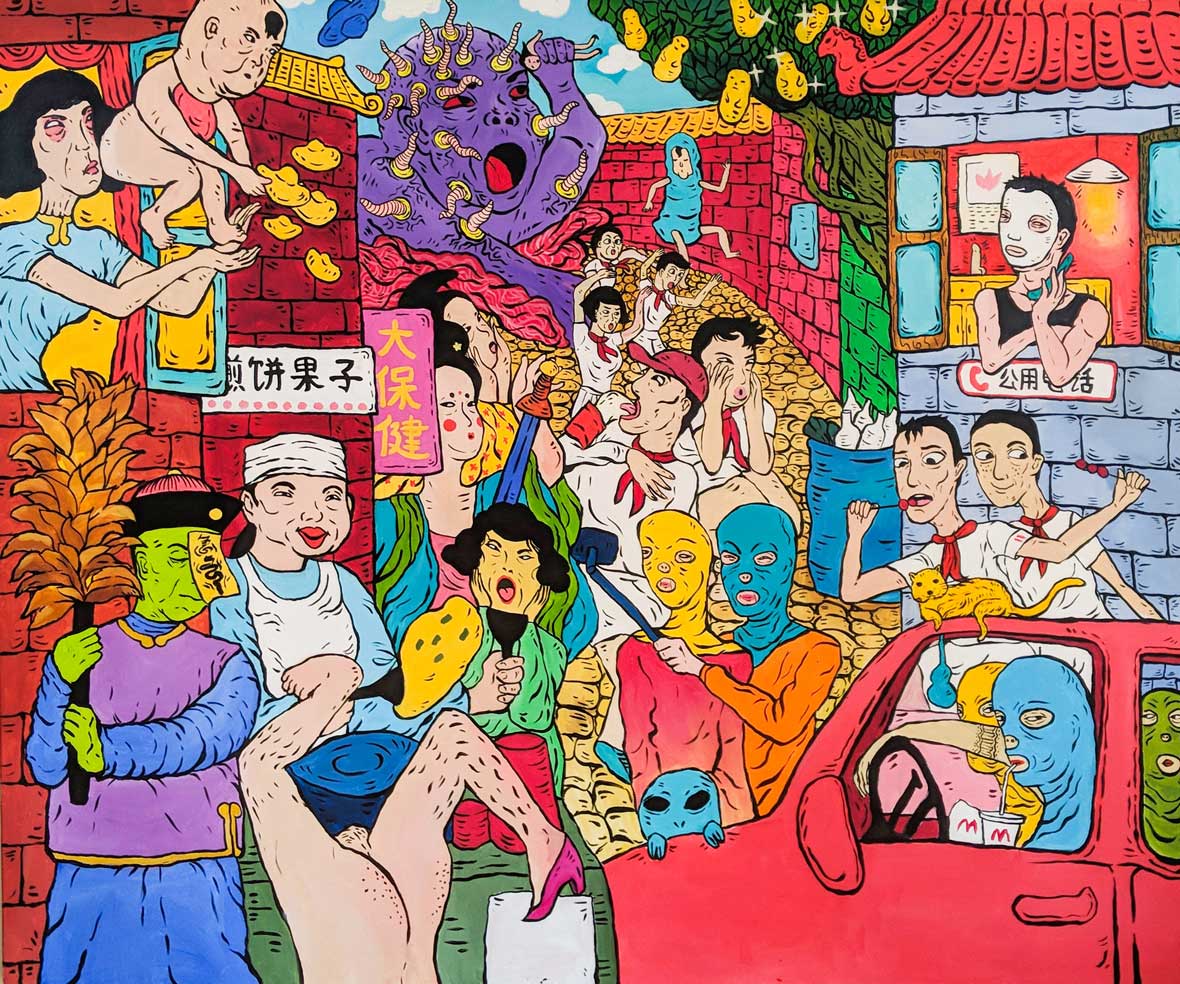 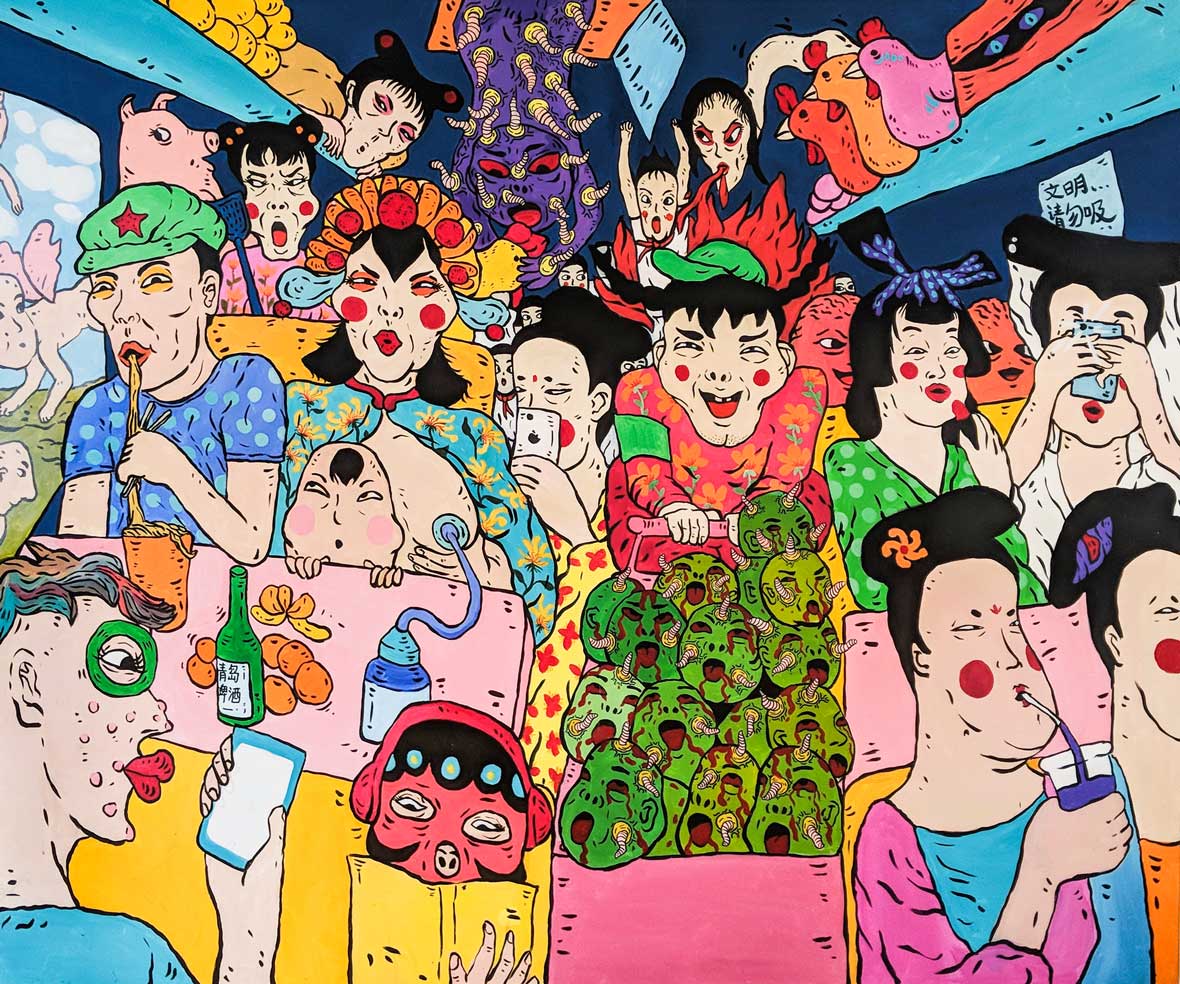 Du now divides his time between Beijing and New York City, where he’s pursuing his Masters in Painting and Drawing at the Pratt Institute. He’s doing research on the LGBT community and intends to explore this topic through his artwork. This is another latent issue for young Chinese people. Viewers should expect the usual dose of horror and dark humor. 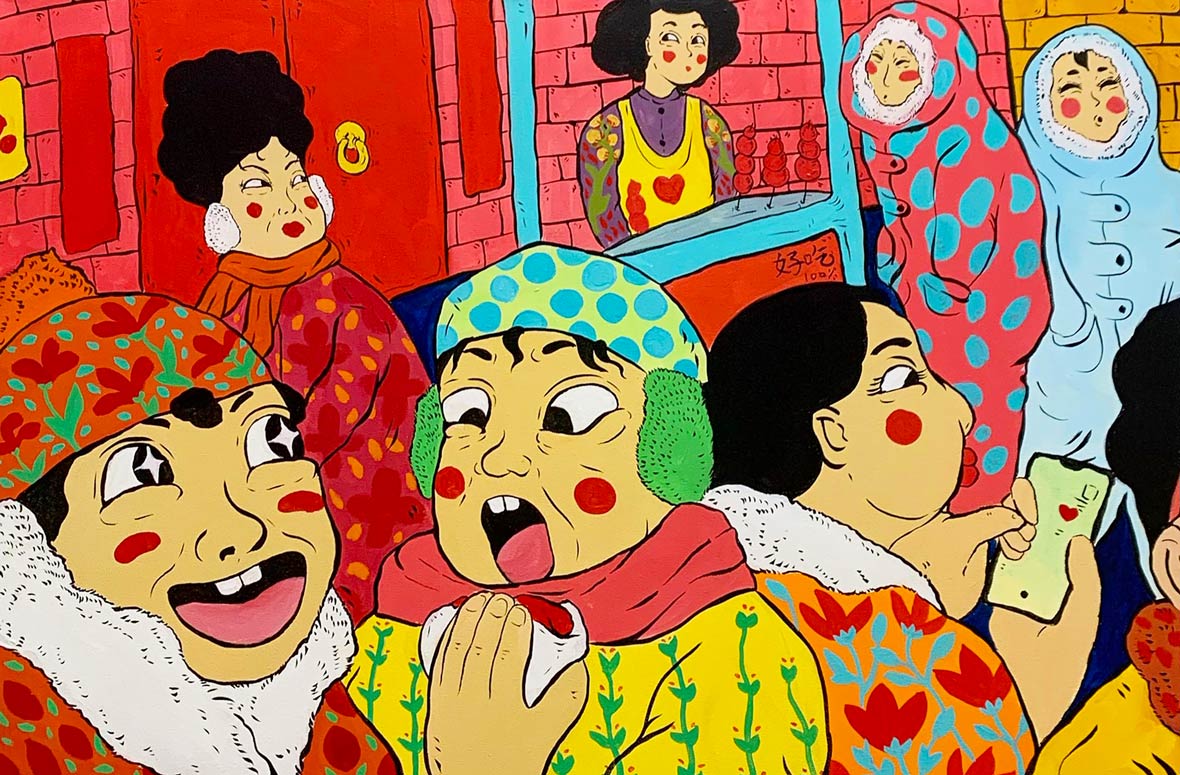