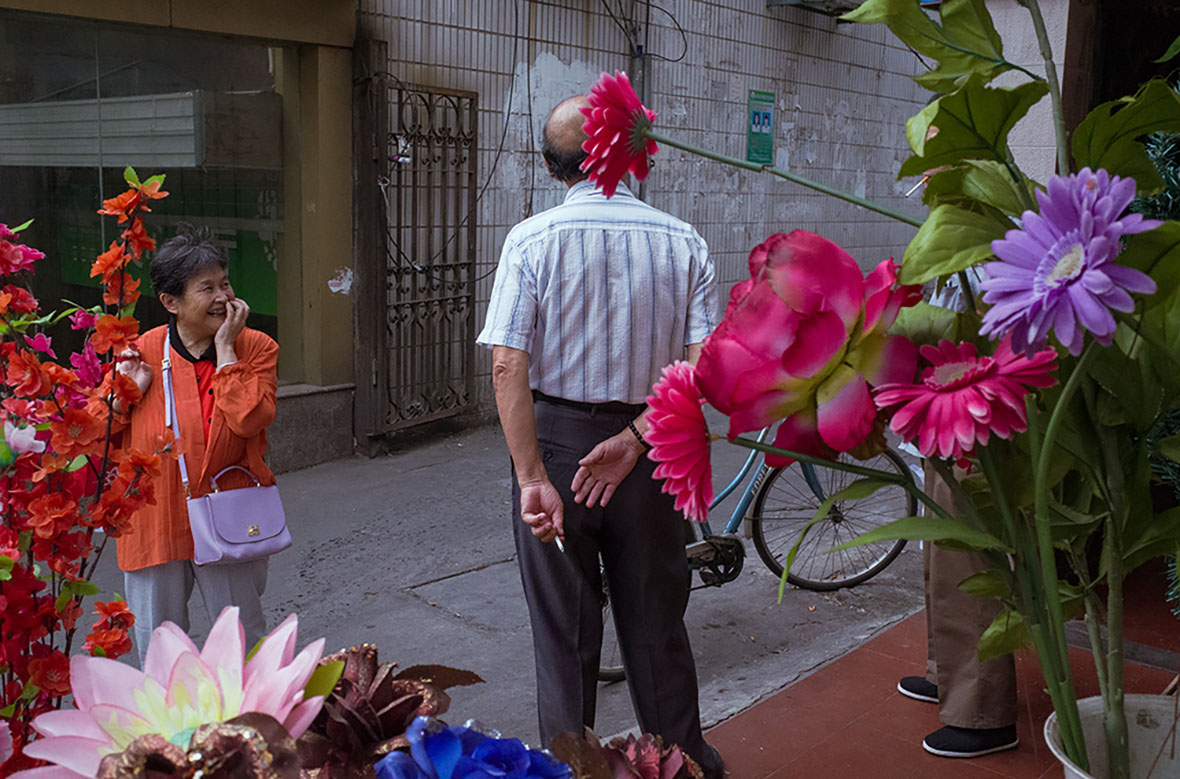 Liu Tao is a Chinese photographer from Hefei, Anhui Province. With his keen sense of humor and an insider’s perspective of the city, Liu has been given the nickname “wild street photography master.” Despite the extravagant title, Liu actually works as a water meter inspector for the public utility services. The contrast between his day job and his street photography has made Liu a subject of interest in the media in the past few years. However, Liu doesn’t see any conflict between these two parts of his life. His job for the public utility services gives him a set schedule, allowing him the freedom to go out and consistently take photographs throughout the year. Now, with seven years of street photography experience under his belt, Liu has captured the everyday lives of many of Hefei’s residents and has documented almost every emotion on the human spectrum along the way. 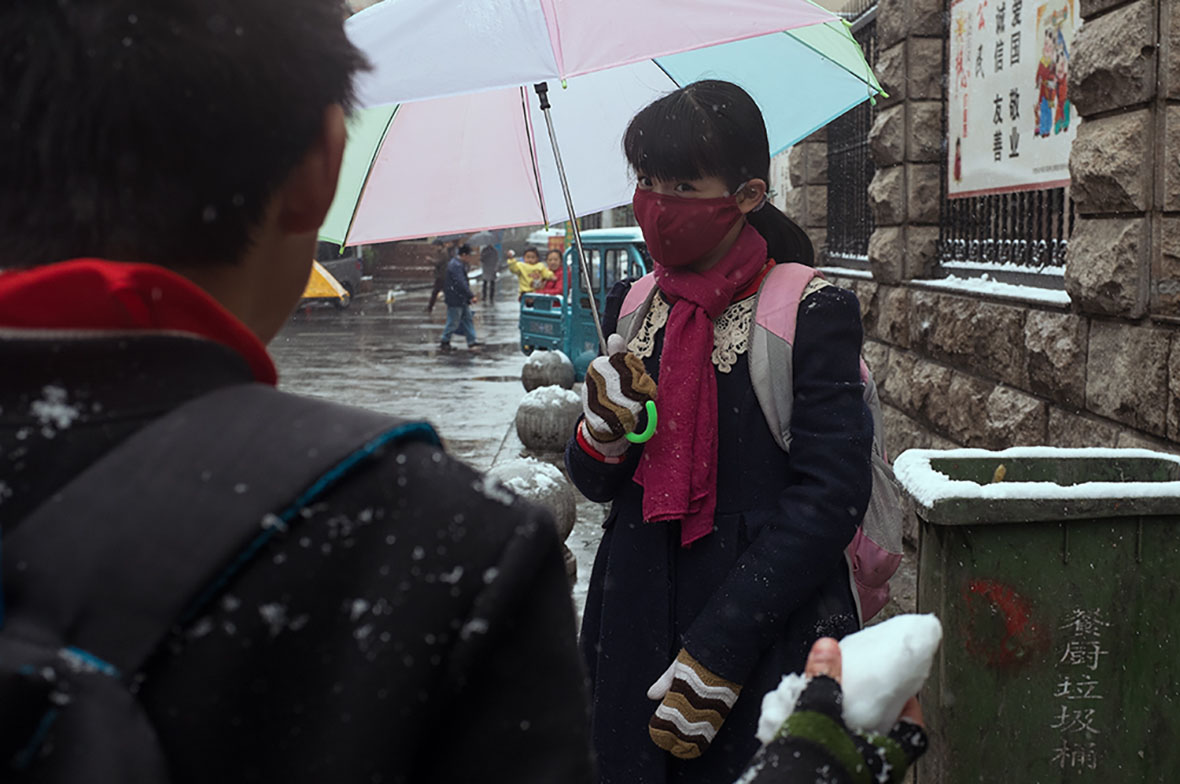 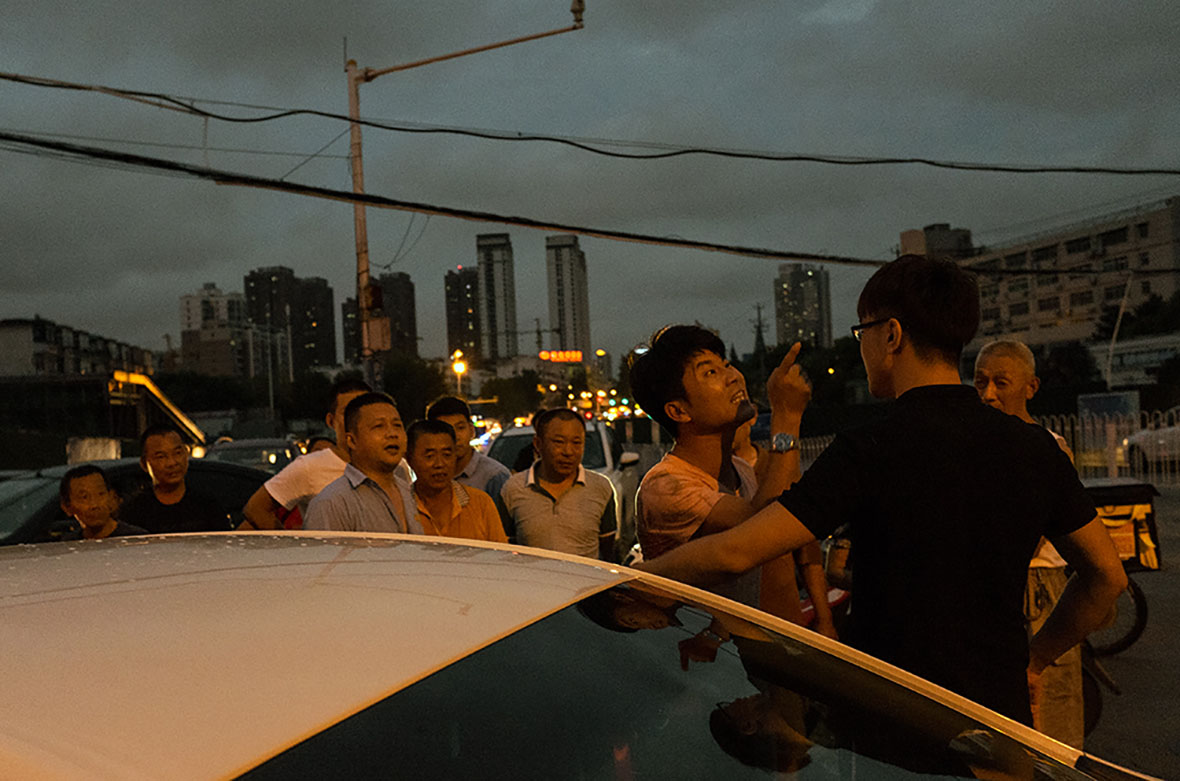 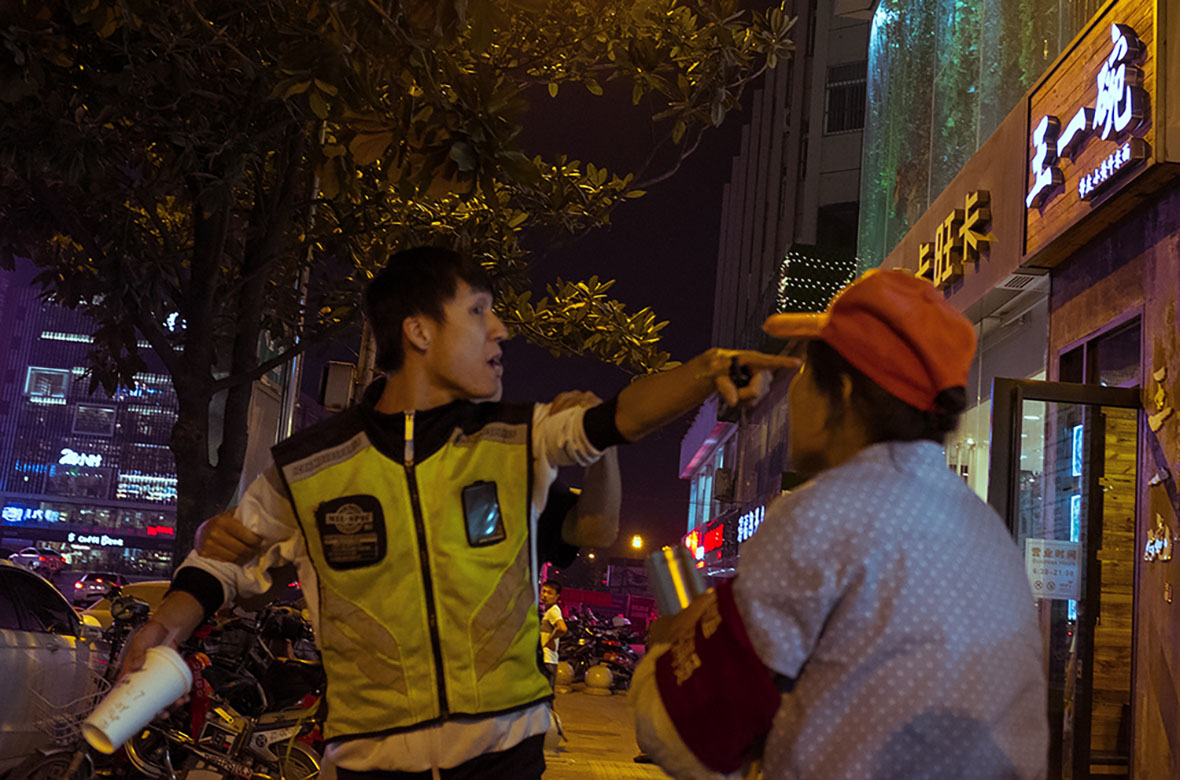 Liu’s favorite place to shoot is one particular street in Hefei, located in an old neighborhood that’s bustling with life. Whenever he has a day off, he’ll take his camera there, often spending the entire day shooting. Initially, when he first started taking photos here, some of the residents would react in a disapproving or standoffish manner. Liu says, “Two years ago at the door of the food market, I would come across a bulky guy selling peaches every day, and we would exchange glances. He thought I was from the city. Last year, at the intersection, we met again and he was selling sugar cane, and he thought I lived nearby. I told him I was just a photographer. This year, we crossed paths again at night, at the entrance of an alleyway where he was selling watermelons. As soon as he saw me, he yelled, ‘What are you up to! Why do I see you everywhere! Don’t mess around with me!’ His yelling startled all of the other streetside vendors around us.” Liu tells that normally when a photographer becomes a familiar face in the area, people will be more receptive to being photographed. 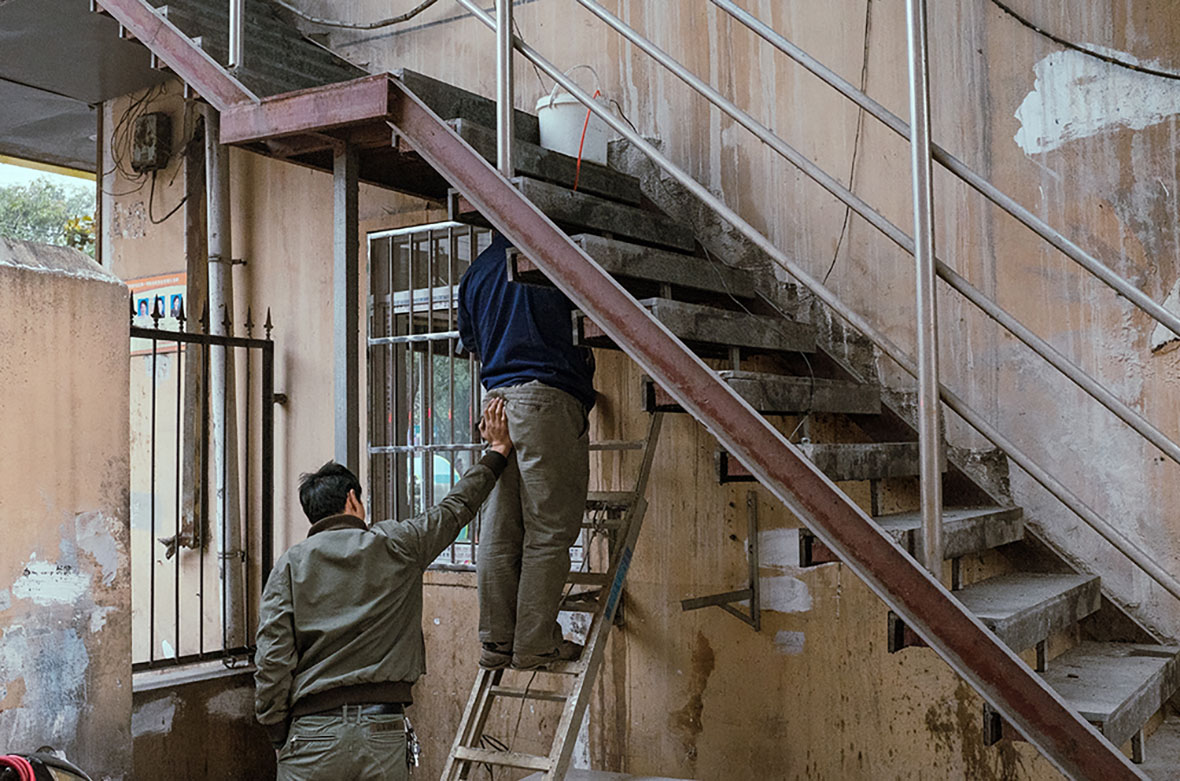 Over the years, Liu has observed both the familiar sights of the old streets as well as the changes in both the city and its residents. He shares that he doesn’t go to commercial or business districts, disinterested in photographing skyscrapers. He says, “Those places don’t have the atmosphere of daily life.” As an ardent observer, Liu remains fascinated by the daily patterns of people on Hefei’s old streets. But what truly captivates his interest are the stories behind each and every person. 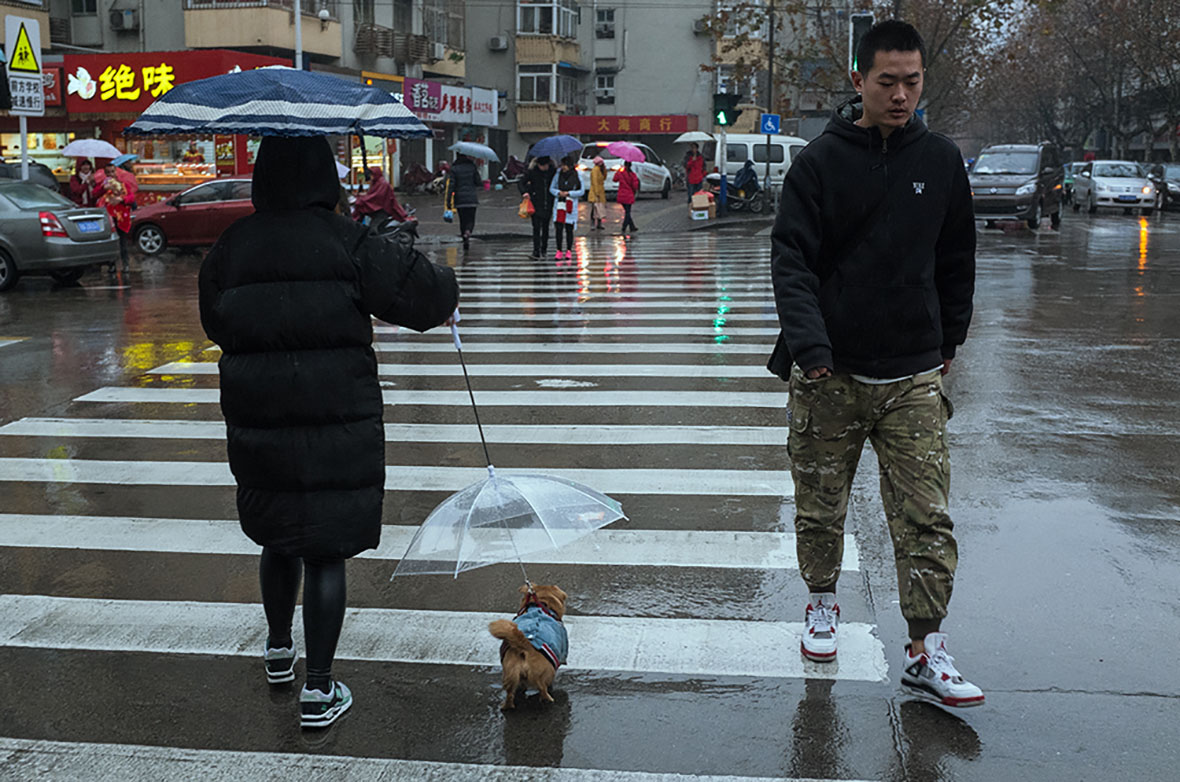 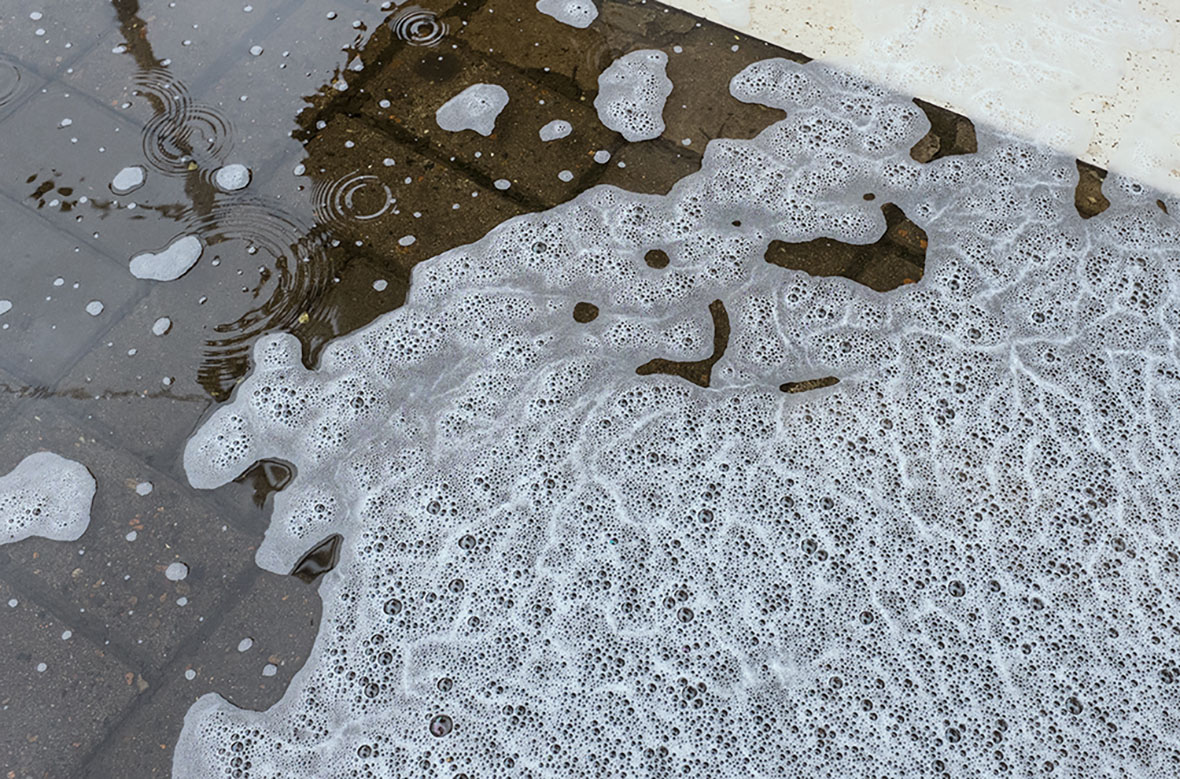 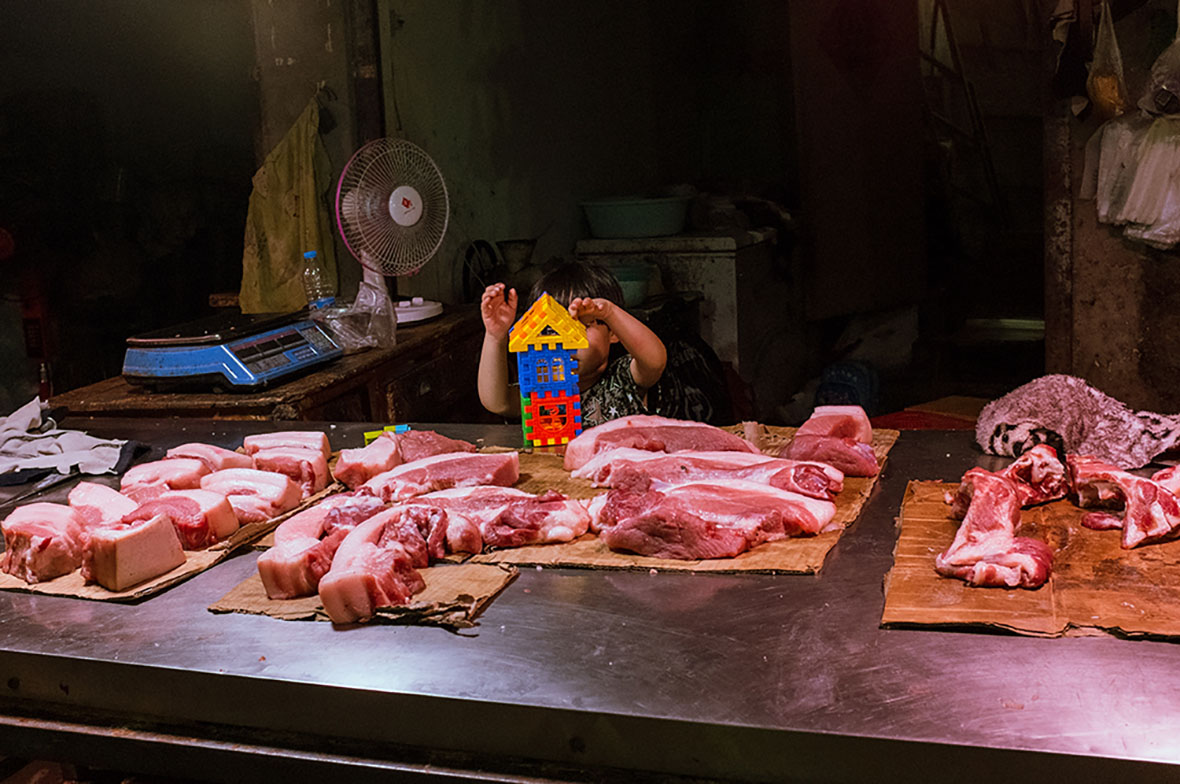 Taking photographs in the same area for such a long time, Liu will often run into the same people again and again. This has led to no shortage of awkward moments. One time, a photo that he took of the female butcher shop owner taking a selfie with her legs kicked up on the table became the headlining photo of a local newspaper. He confesses that now, every time he passes by the butcher shop, both he and the owner will avoid making eye contact with each another. “It’s way too awkward,” he says. 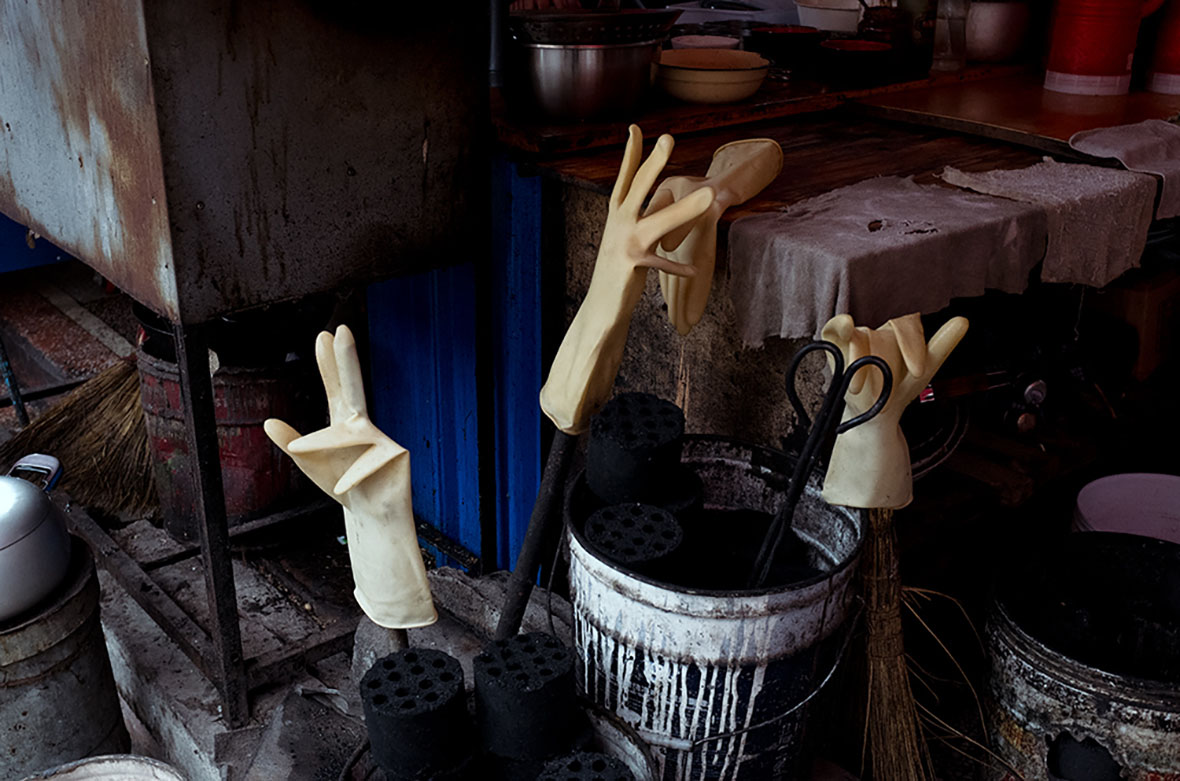 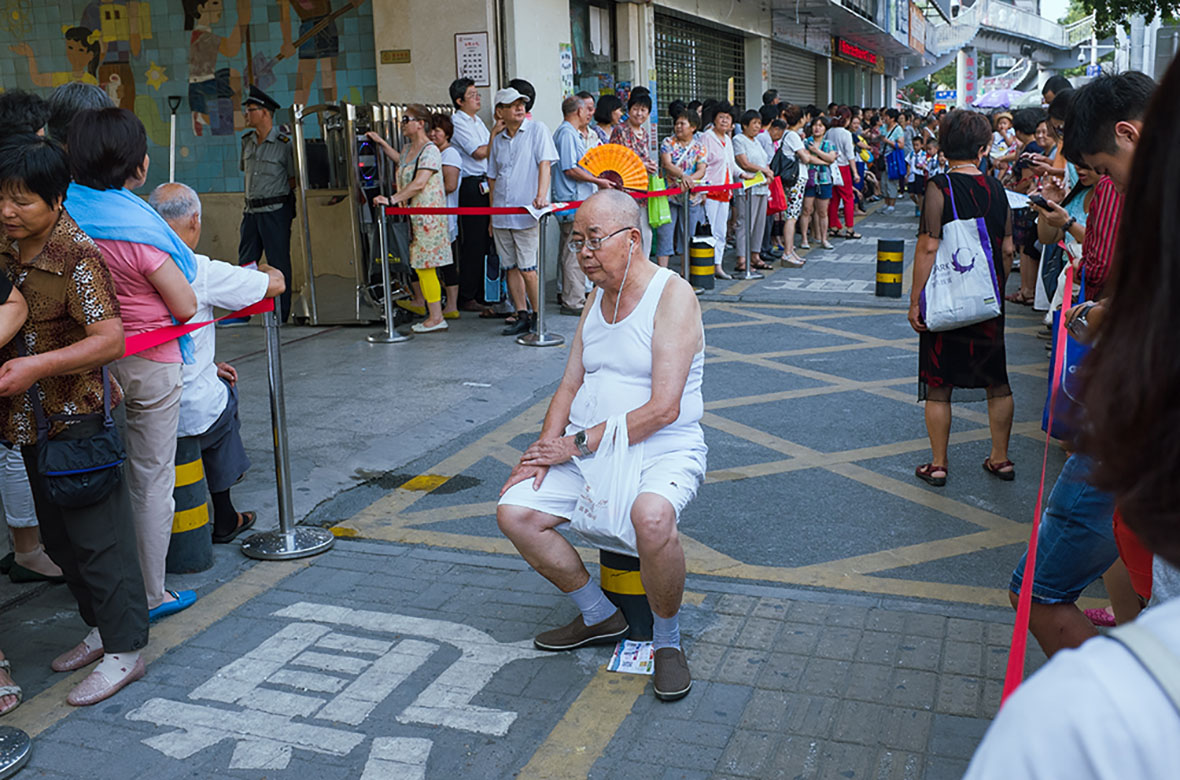 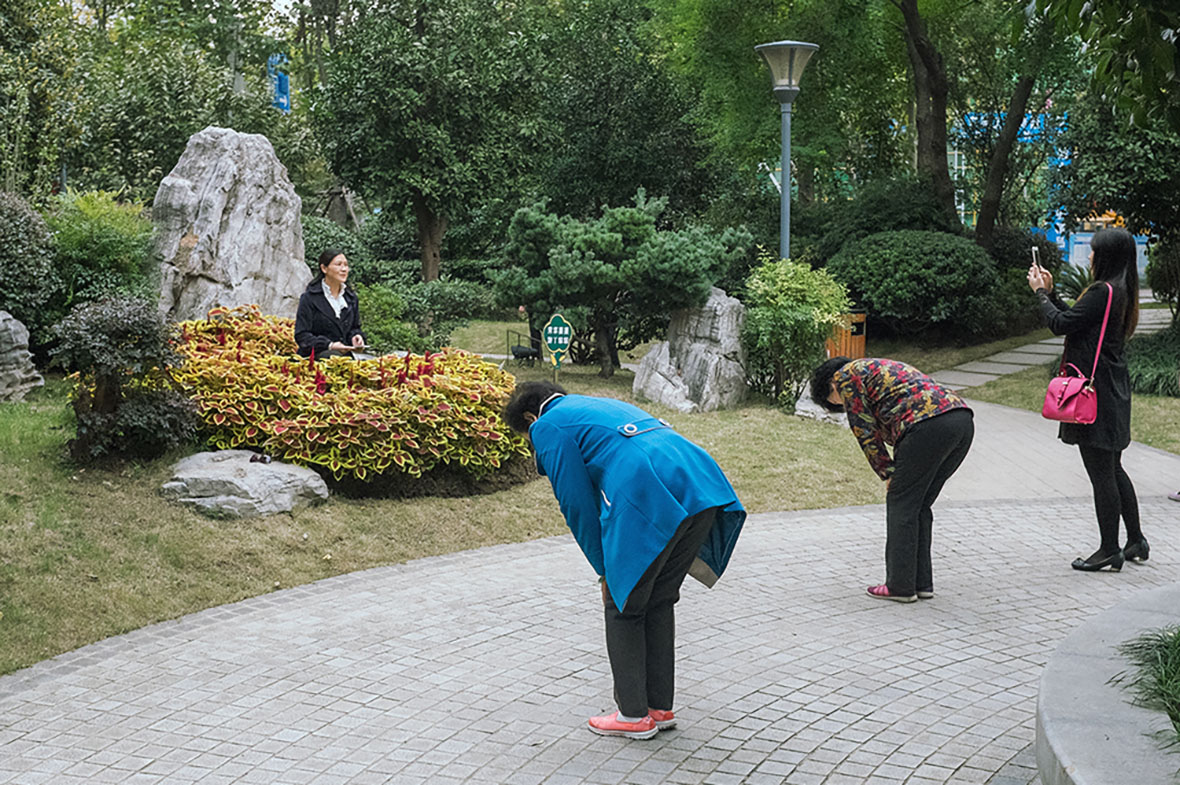 Liu always finds interesting perspectives to shoot from. He may stay in the same spot for a few hours – even a few days – waiting for the perfect moment to present itself. Sharing the story behind the above photo, he says, “When I shot this, I saw that there were people coming to take photos in front of these flowers, while these aunties were doing exercises next to them. The aunties just happened to be bowing down while the woman posed in front of the flowers, so I captured that moment.” Liu’s street photography style draws from his own influences as well. He’s a lover of the films of Stephen Chow, and he never gets tired of their sense of humor and slapstick moments. What motivates Liu to keep exploring and shooting are coming across these humorous, interesting moments within the mundanity of daily life. 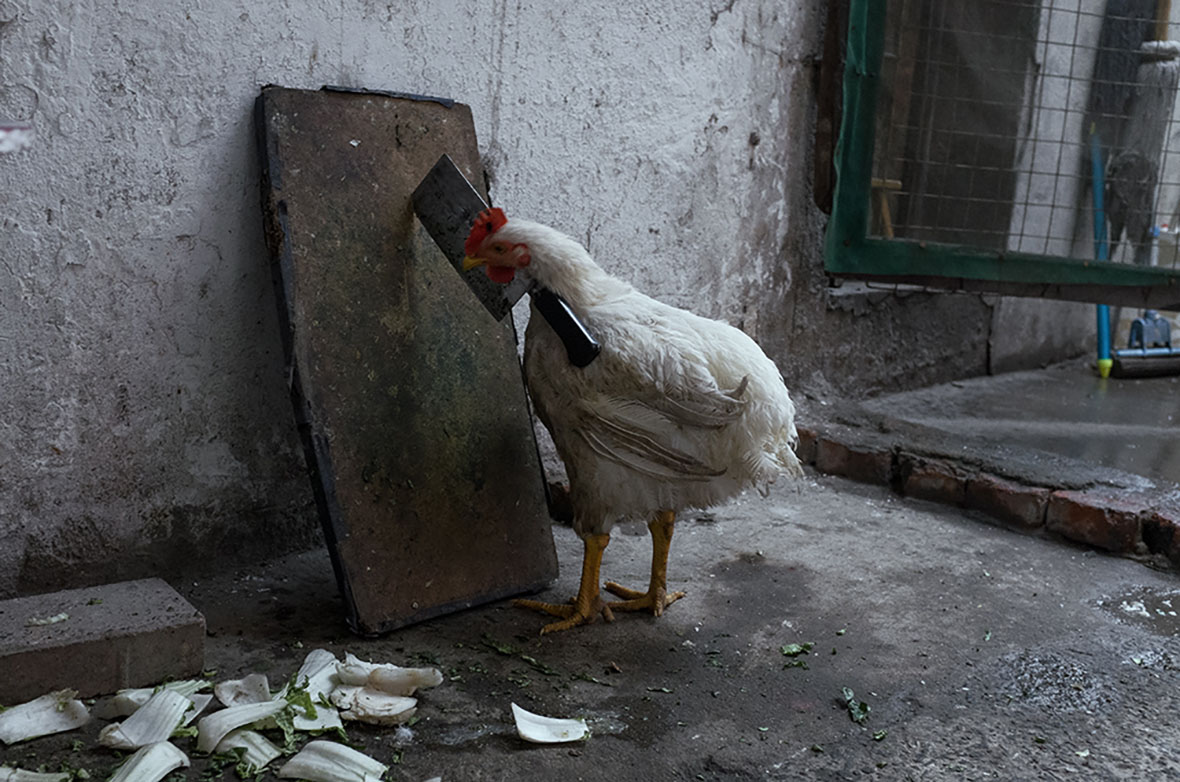 Now, as a father, Liu spends a lot of time photographing his daughter instead of Hefei’s old streets. When he was offered an opportunity to become a full-time photographer, he declined, choosing instead to humbly continue his work inspecting water meters. For Liu, photography was never about advancing his position or chasing fame and fortune – he just wanted to experience more of what life was about, to fully live life and live it well. 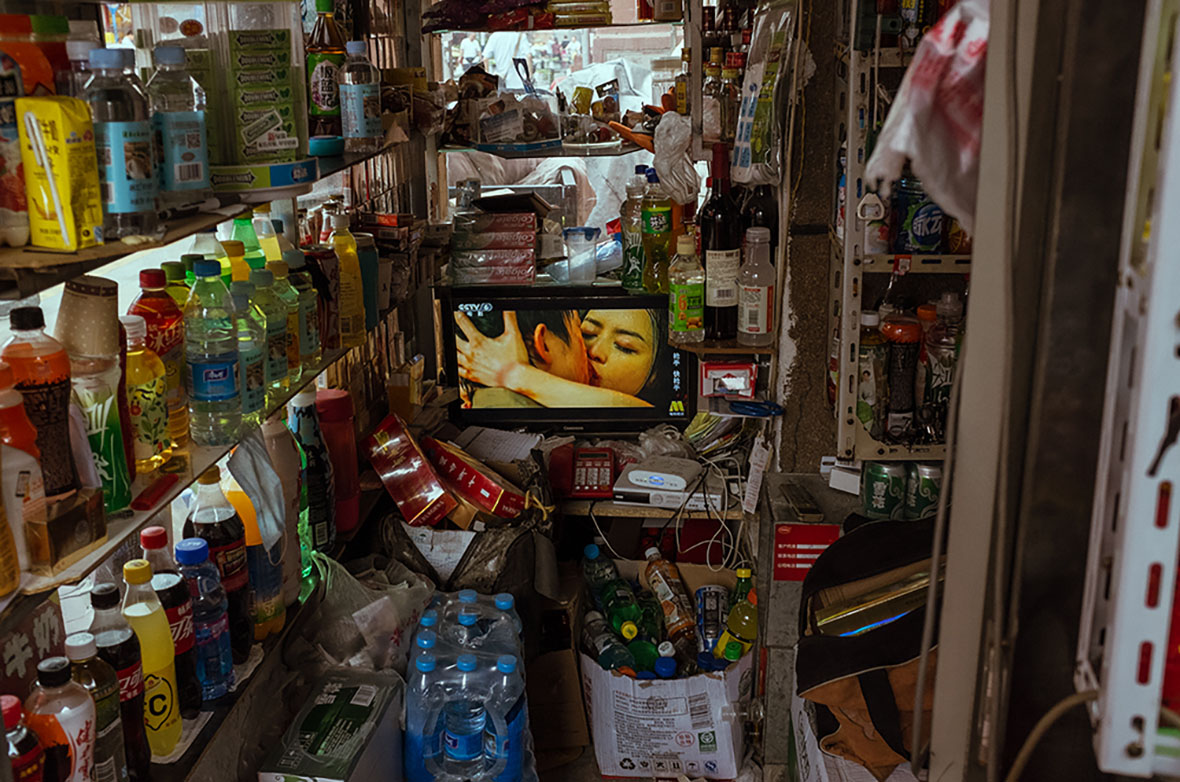 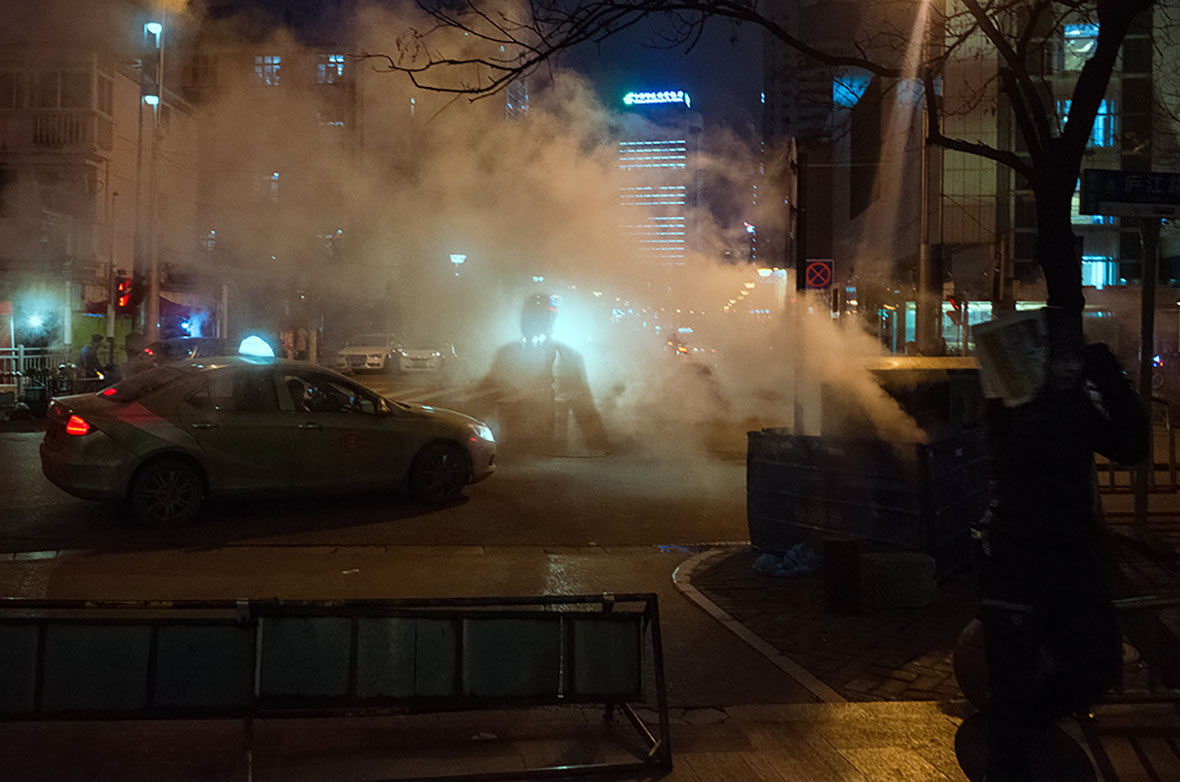 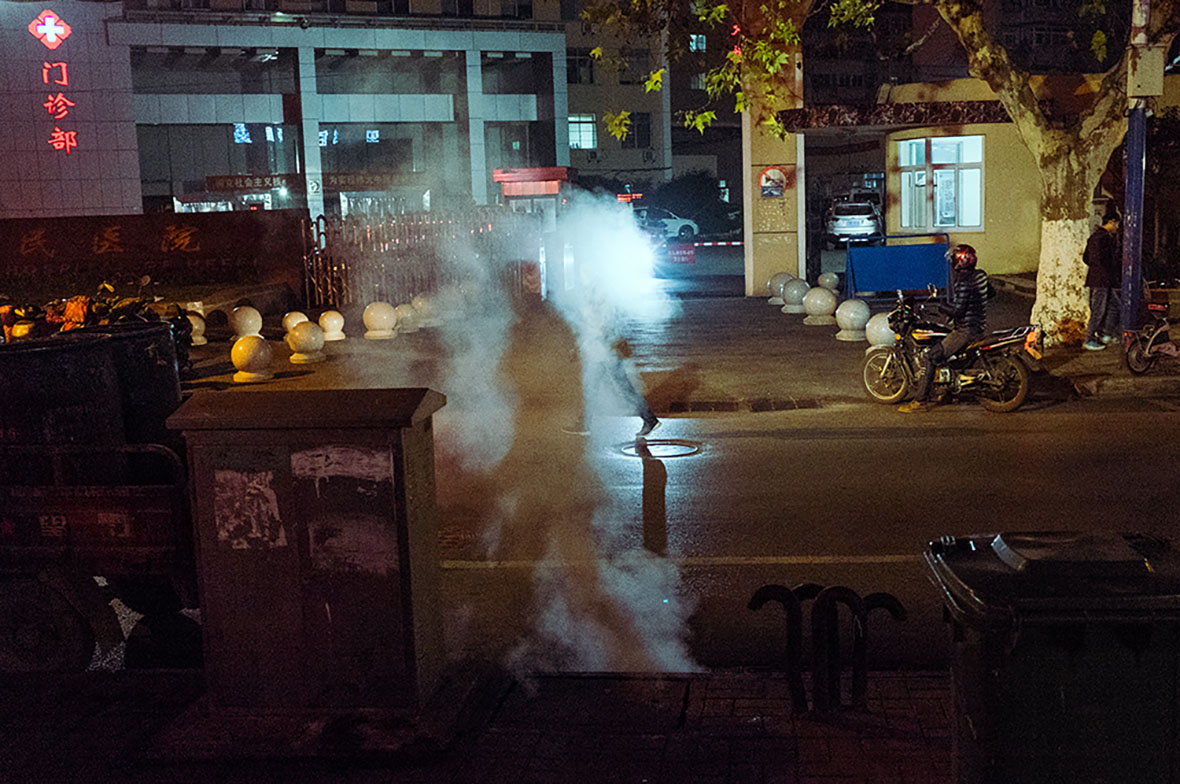 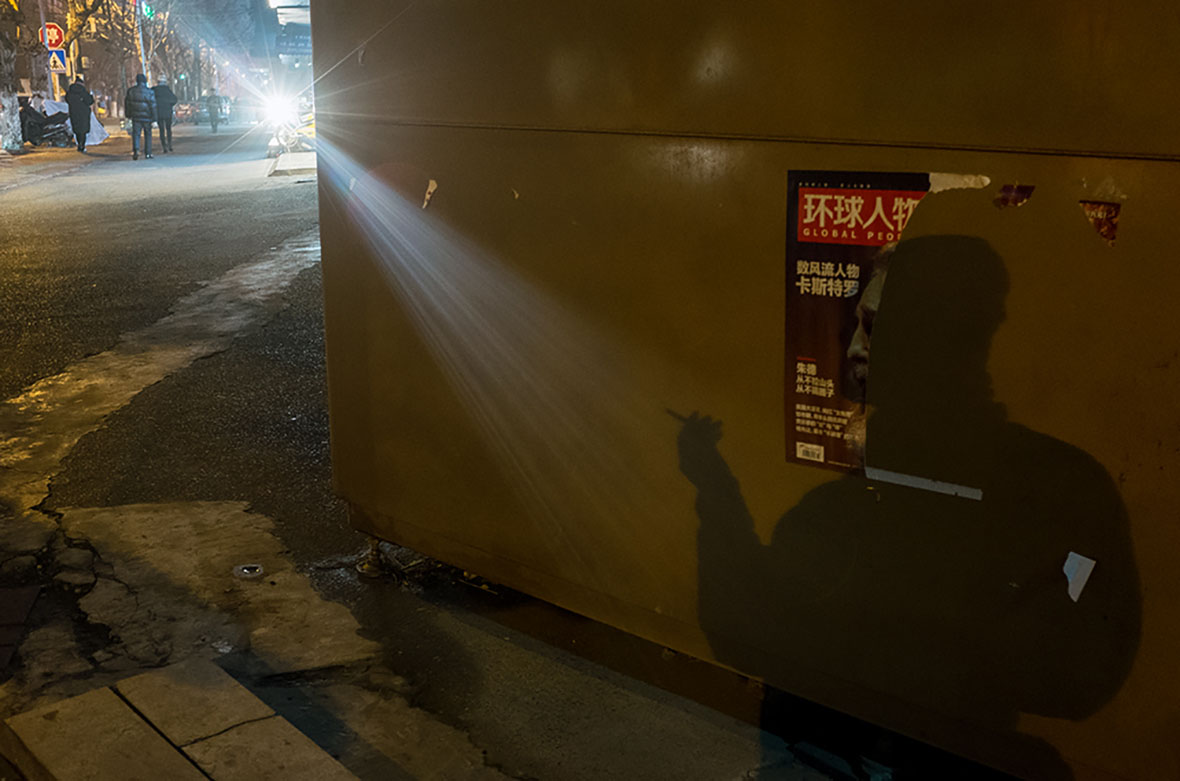