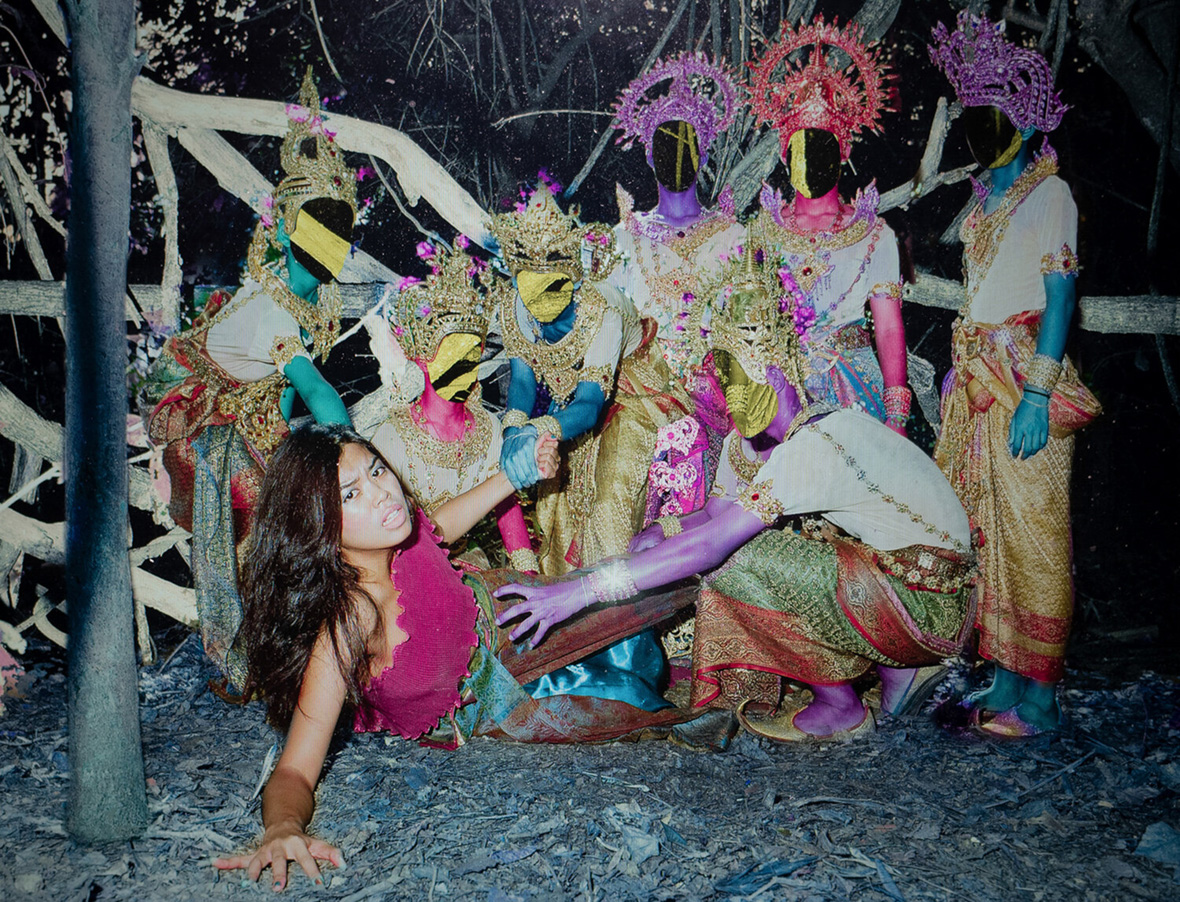 In Buddhism and Hinduism, the lotus flower is a symbol of purity. The flower is of particular significance in Thailand, a country where both religions thrive. But in the works of Thai artist Kamonlak Sukchai, the lotus is twisted into an object of ambiguity. Her latest multimedia project, Red Lotus, offers forth a surreal story of a virgin who eats a forbidden fruit. Like the best folklores, the narrative captures the imagination.

“Long ago, in a distant village, there was once a beautiful girl. The girl, born in the sacred waters of the Ganges River, had an air of allure that drove the men wild. The king sent her away, exiling her into the forest where she’d live with twelve ascetic monks who watched over the Ganges River. She had her first period while living in the forest and found herself craving a taste of a forbidden fruit. While the monks were busy at a ceremony, she climbed the holy tree to pluck the fruit. While scaling the branches, her period blood drips down on a sorcerer passing by, which strips him of his powers. He demands the girl to give her virginity in exchange. She agrees.

Not long after, the King held a baptism in the woods. As part of the ritual, the banished girl was expected to bathe herself in the waters. But the moment she stepped into the river, the water was dyed a crimson red, signifying her loss of purity. The village people were furious. They screamed and cursed at her, believing that only by punishing her will they be forgiven by the gods. They cut off her breasts and brutalized her genitalia. Before dying from her wounds, the girl prays to Indra, the king of gods in Hinduism, wishing to be reincarnated as a lotus flower in her next life so that she can finally be pure.” 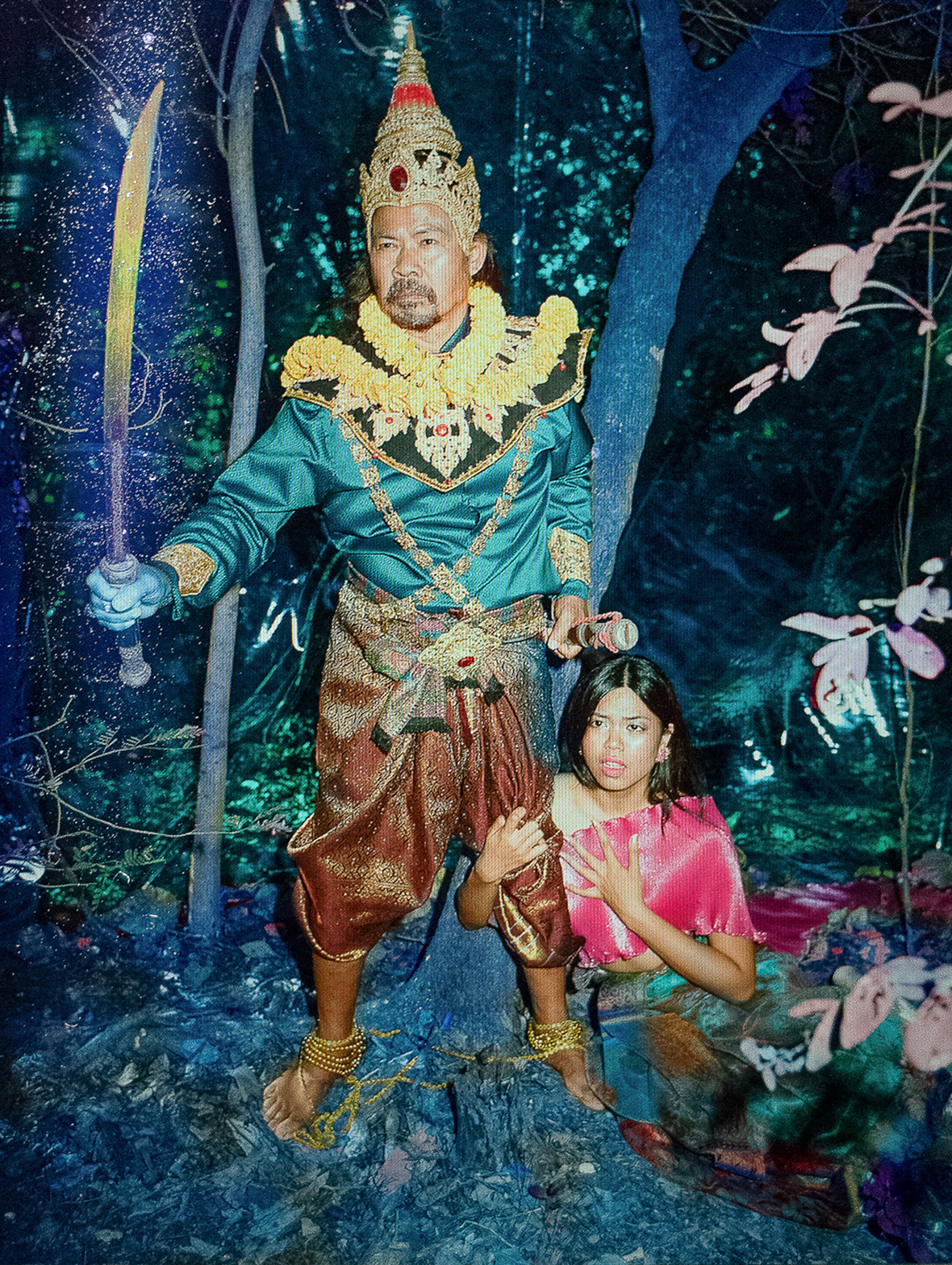 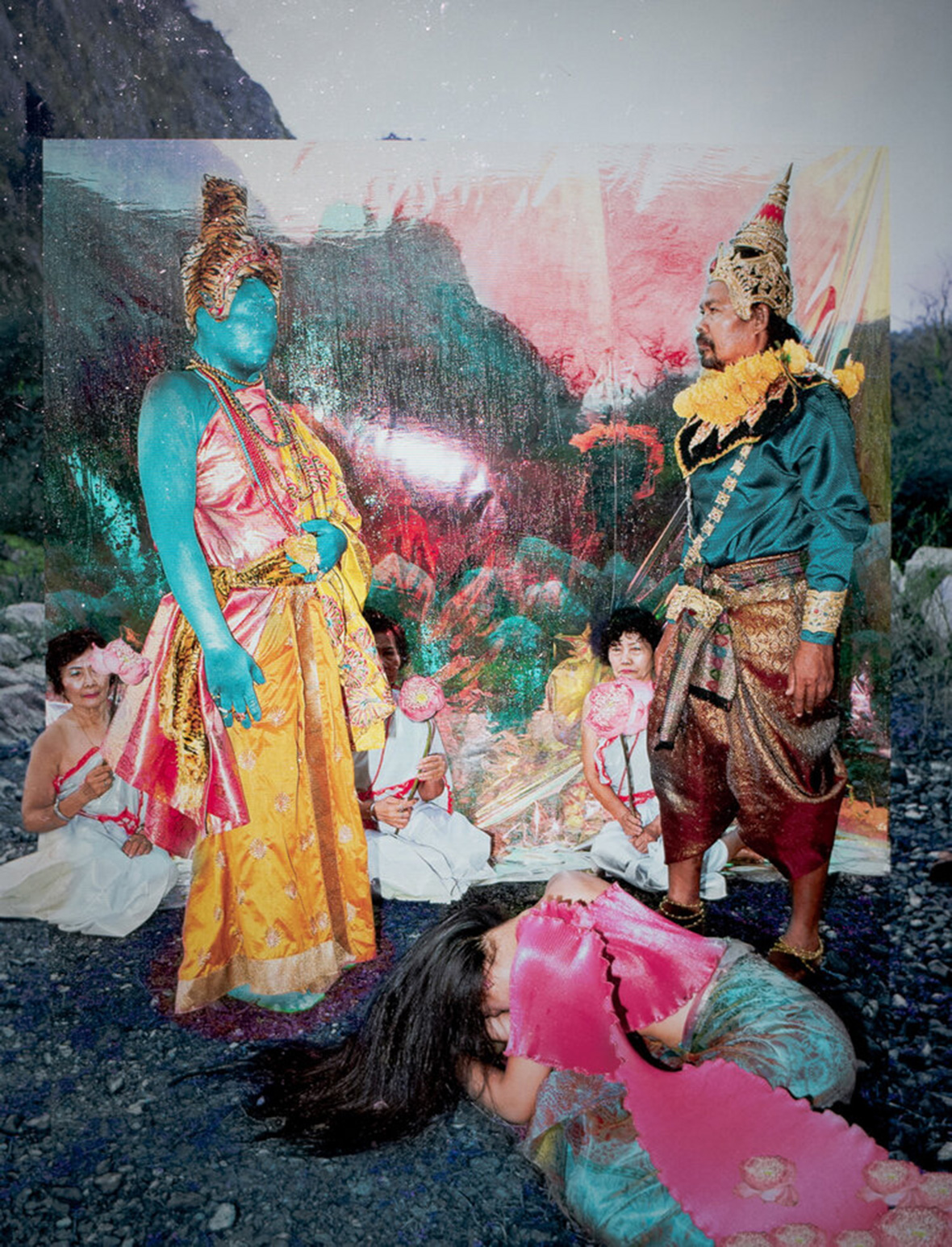 This bizarre story, an amalgamation and reimagining of several Hindi folklores, was designed to be chock full of cliches. The symbols that appear in the series don’t depart from their traditional meaning. The lotus represents purity, red represents degeneracy, the gods as supreme rulers, and desire as punishable evils. As if these overused tropes weren’t enough, Sukchai dressed in the models in traditional Thai costumes. Bumping up the saturation to exaggerated levels in post-production, he looks to evoke the heightened colors of Thai temple designs.

But Red Lotus isn’t a celebration of divinity nor is it a homage to Thai folklore.

Growing up, Sukchai realized how much family, school, and society influenced her thoughts. People in Thailand have freedom of religion, but Buddhism remains the most popular. Statues of Phra Phrom, Indra, and Trimurti are commonplace across Thailand. Animism, the belief that objects and animals have spirits, is also popular in the country. The disparate religious beliefs that co-exist in Thailand are reflected in the country’s folklores, which in turn have shaped the cultural identity of the country. 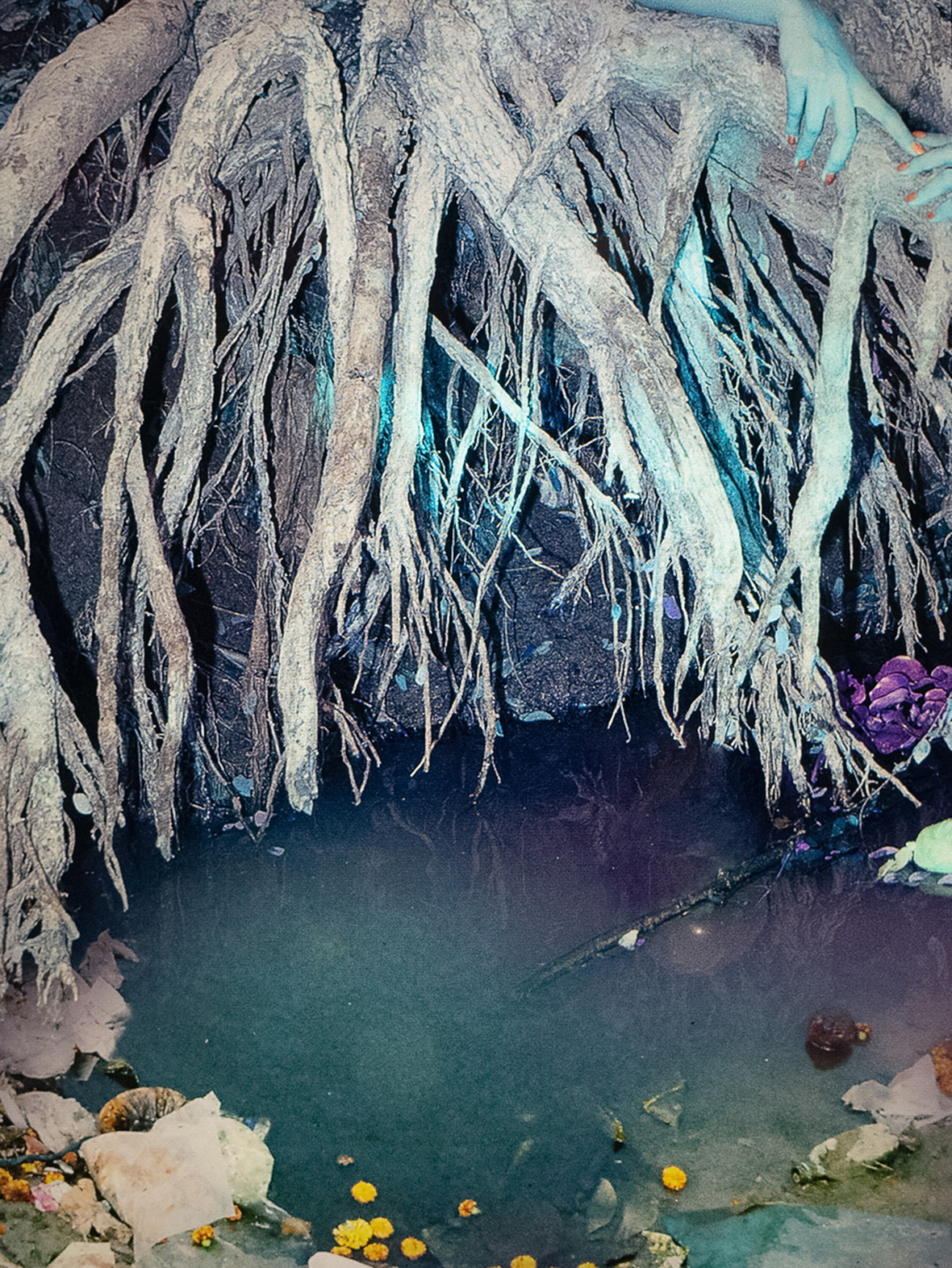 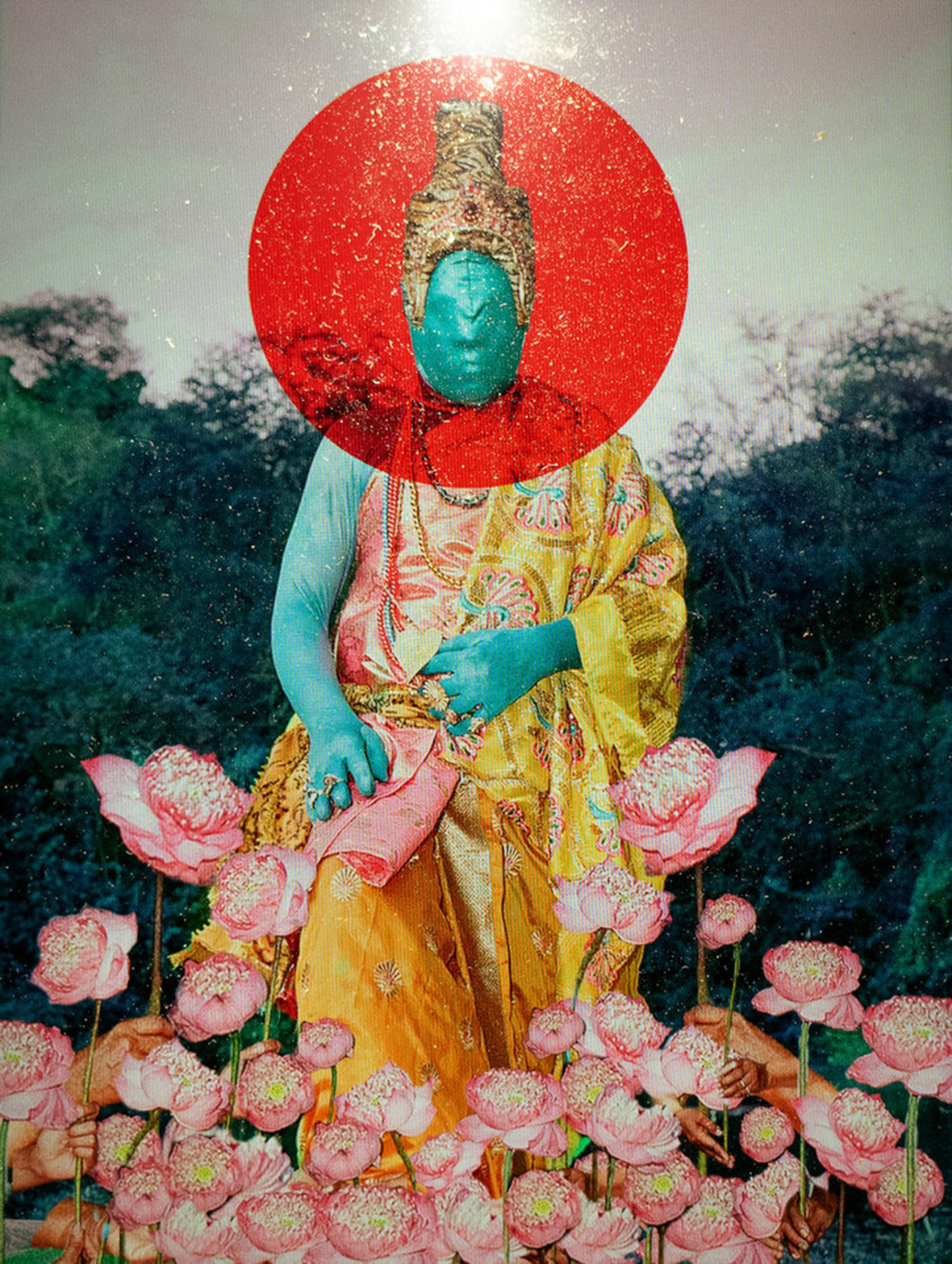 Sukchai is particularly interested in the way folktales blur the line between truth and fiction, the ways they shape people’s perceptions as they’re retold and passed down. Born in Ratchaburi, Thailand to a conservative household, her parents and schooling constantly taught her to be a “good woman.” The notion of “good” remains incredibly ambiguous to her, and she notes that notions of goodness in the country have been shaped by these folklores. The ethic and moral codes that people have built into the narratives felt at odds with her own thoughts and the world as she understood it. 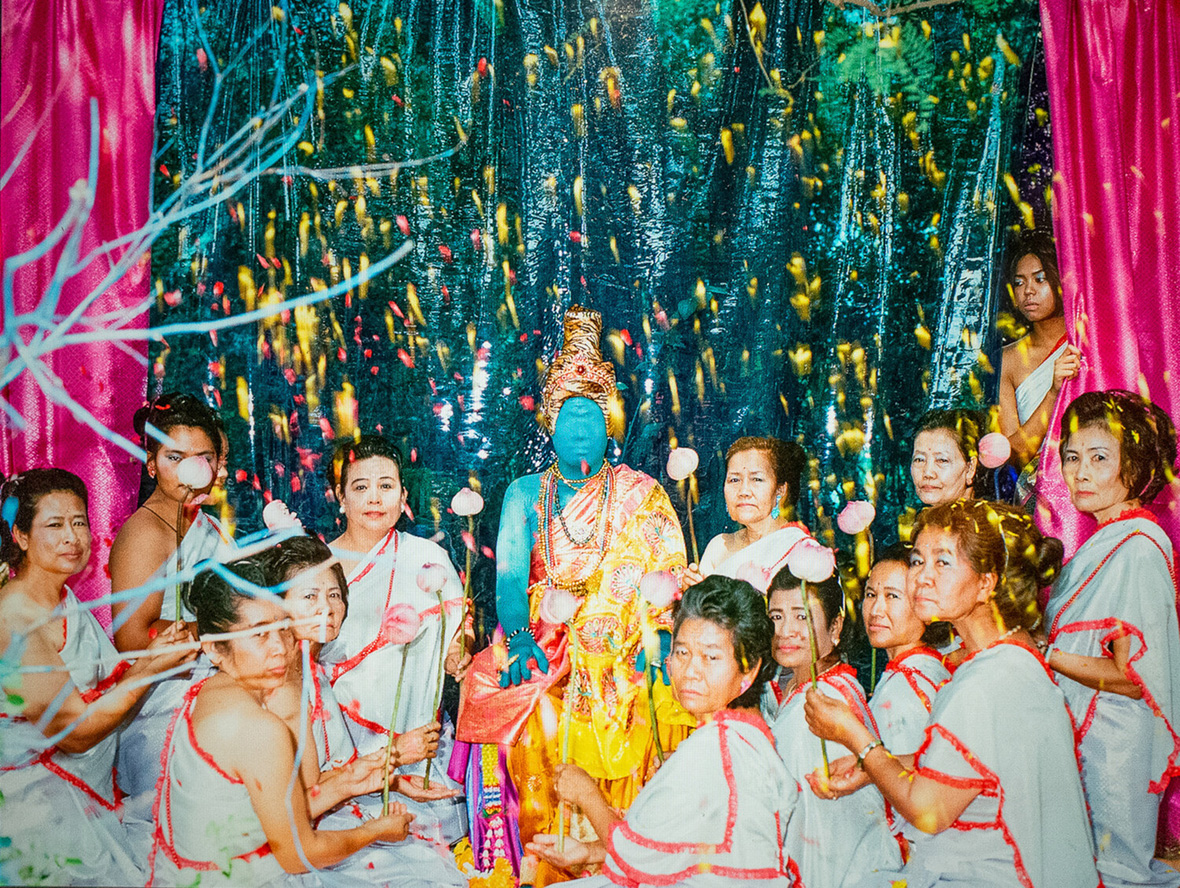 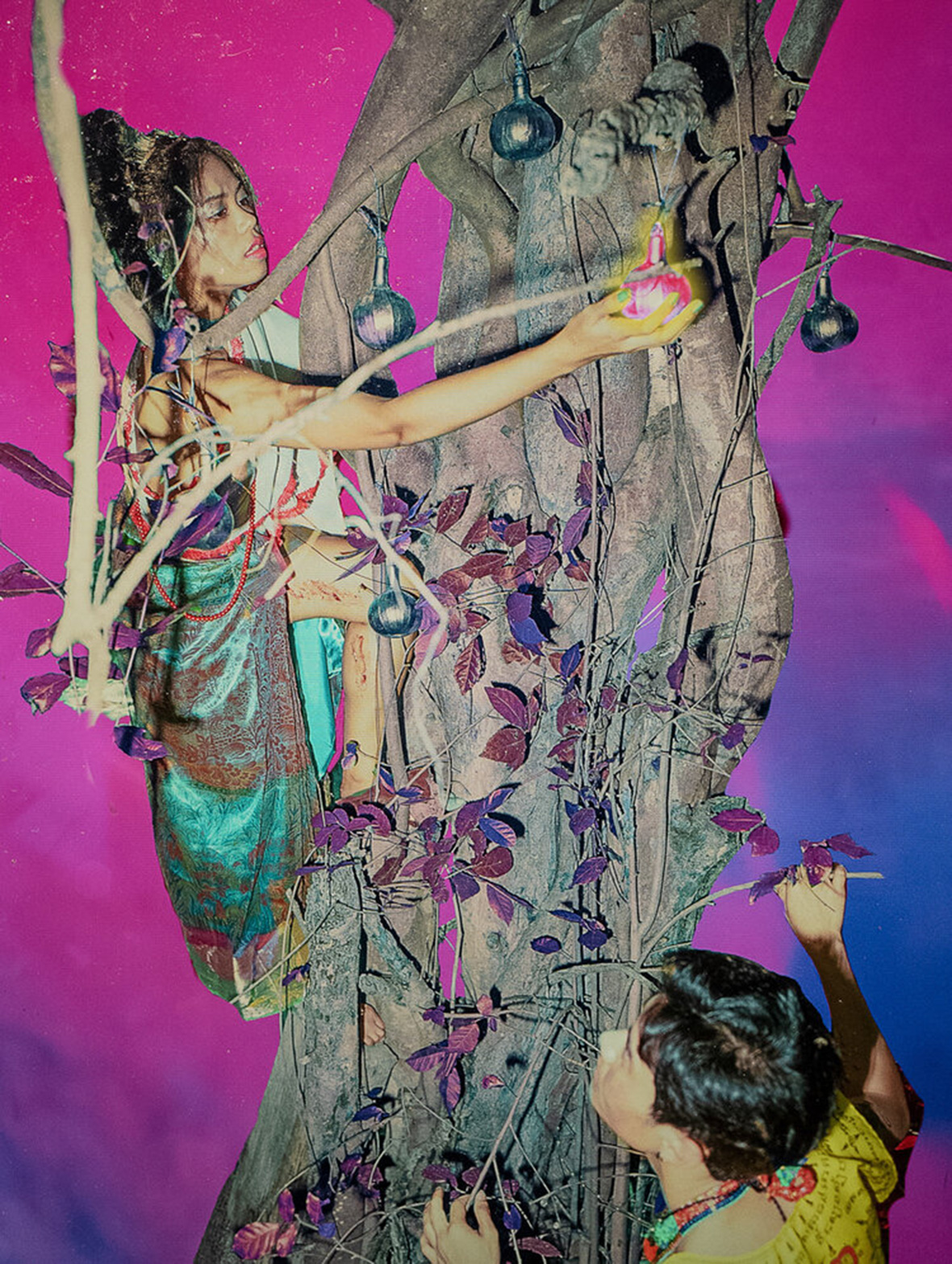 To better understand the current state of Thai society, Sukchai started studying the history of these folklores. The incongruous nature of her own beliefs and societal expectations is perhaps related to the contradictions of the stories themselves. Sex, for example, was a sacred ritual in animism, but with the introduction of Hinduism and Buddhism, it became taboo. Carnal desire became a mental hurdle that needed to be overcome.

Red Lotus revels in the absurdity of it all. To display the incongruity between these outdated fables and modern ideas, she sought to make the project feel as artificial as possible. If you examine these images closely, faint traces of moirés can be seen and even reflections. These unpolished qualities were intended—after adding the collage elements on her prints, she scans them and photographs them from the screen as the final touch. These subtle digital textures are a commentary on the way folktales are passed down from generation to generation, changing ever so slightly with each retelling. 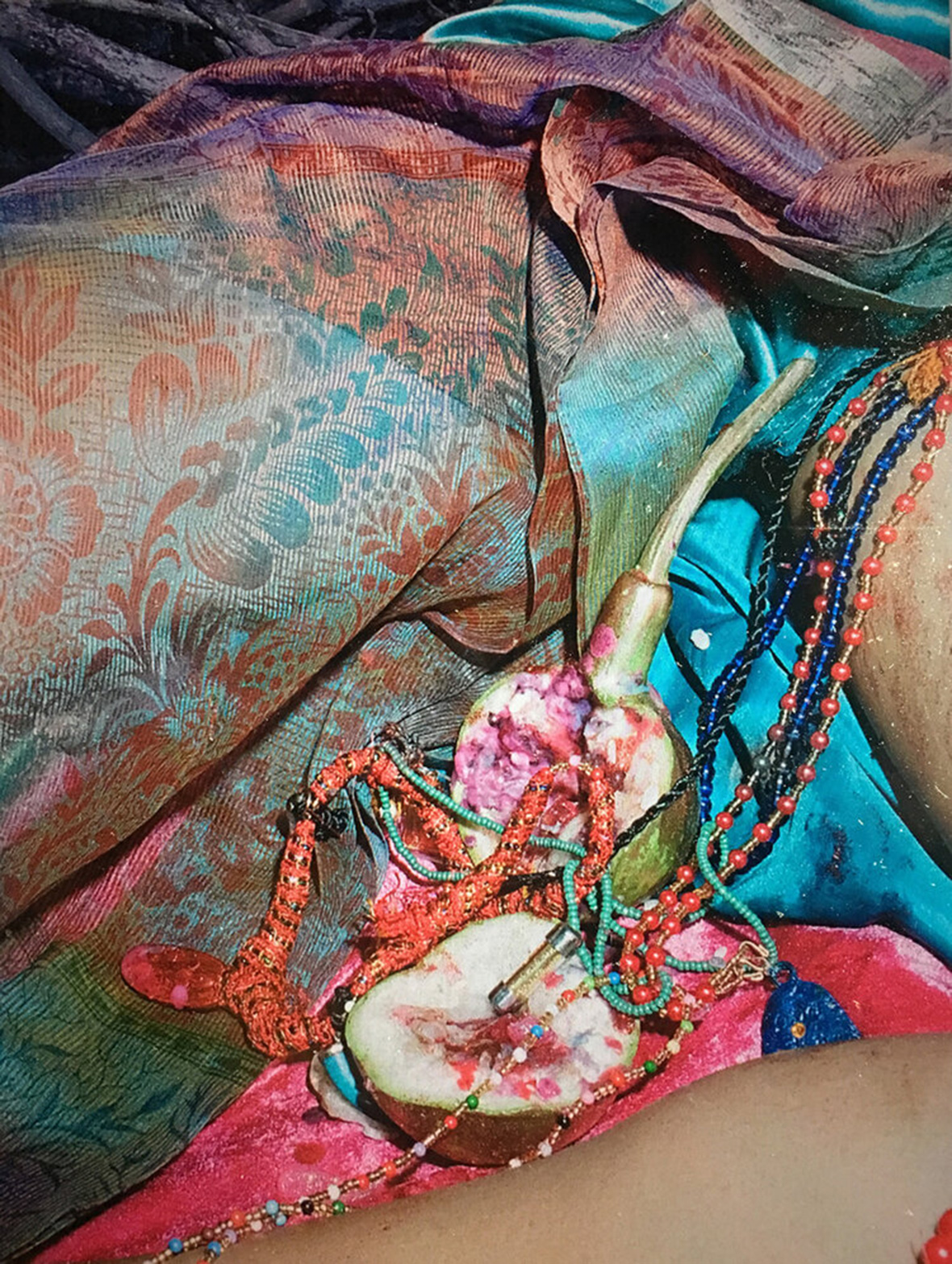 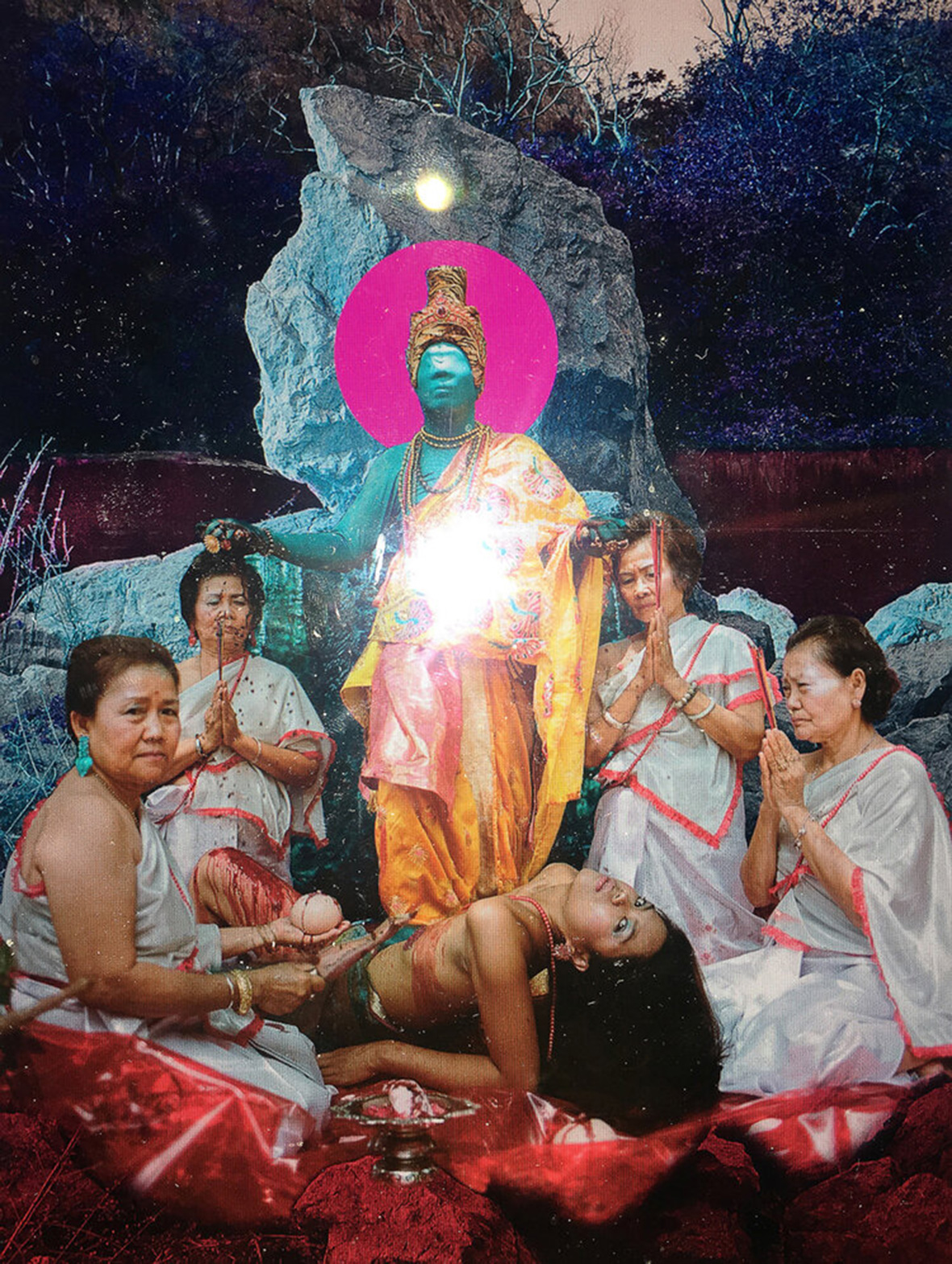 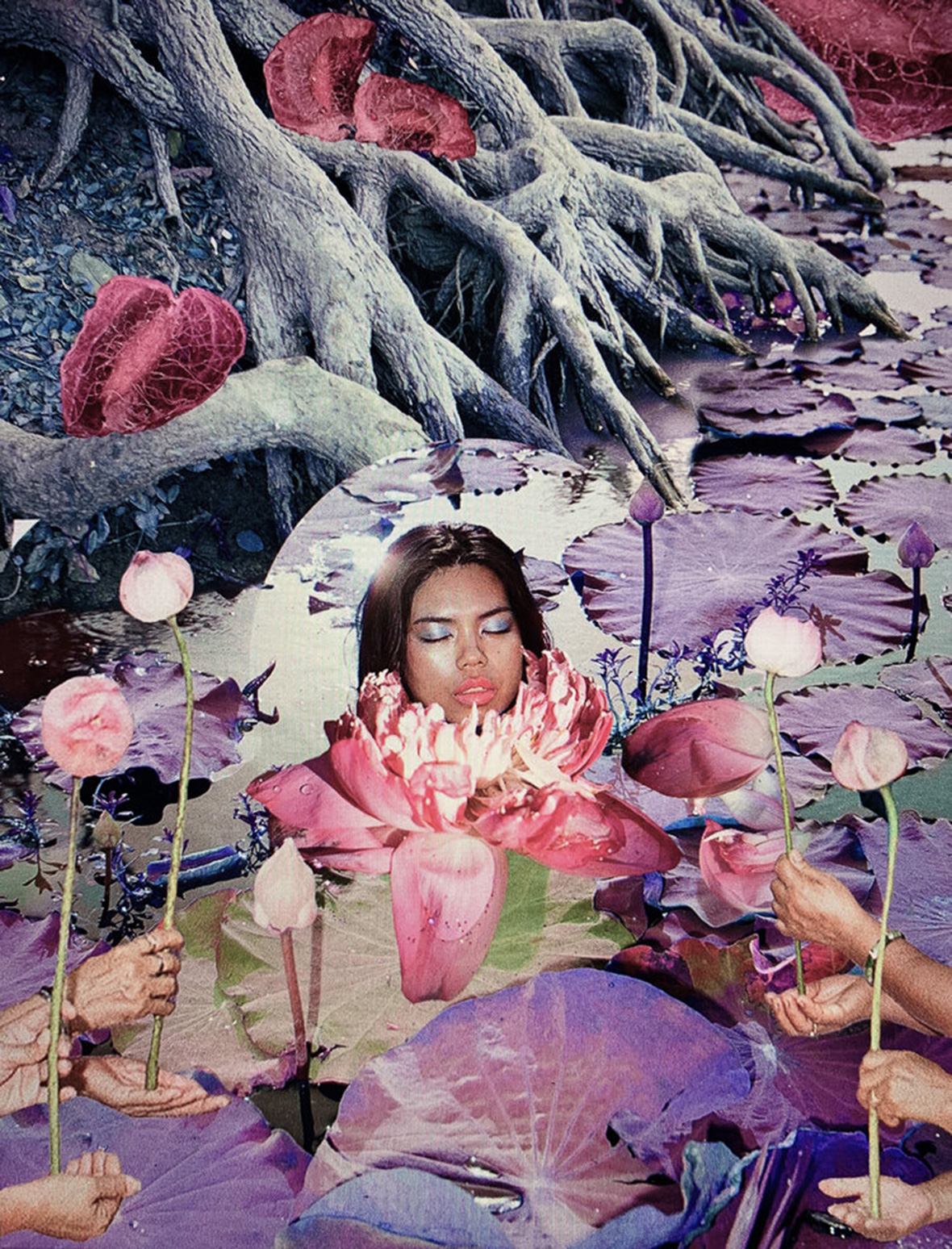 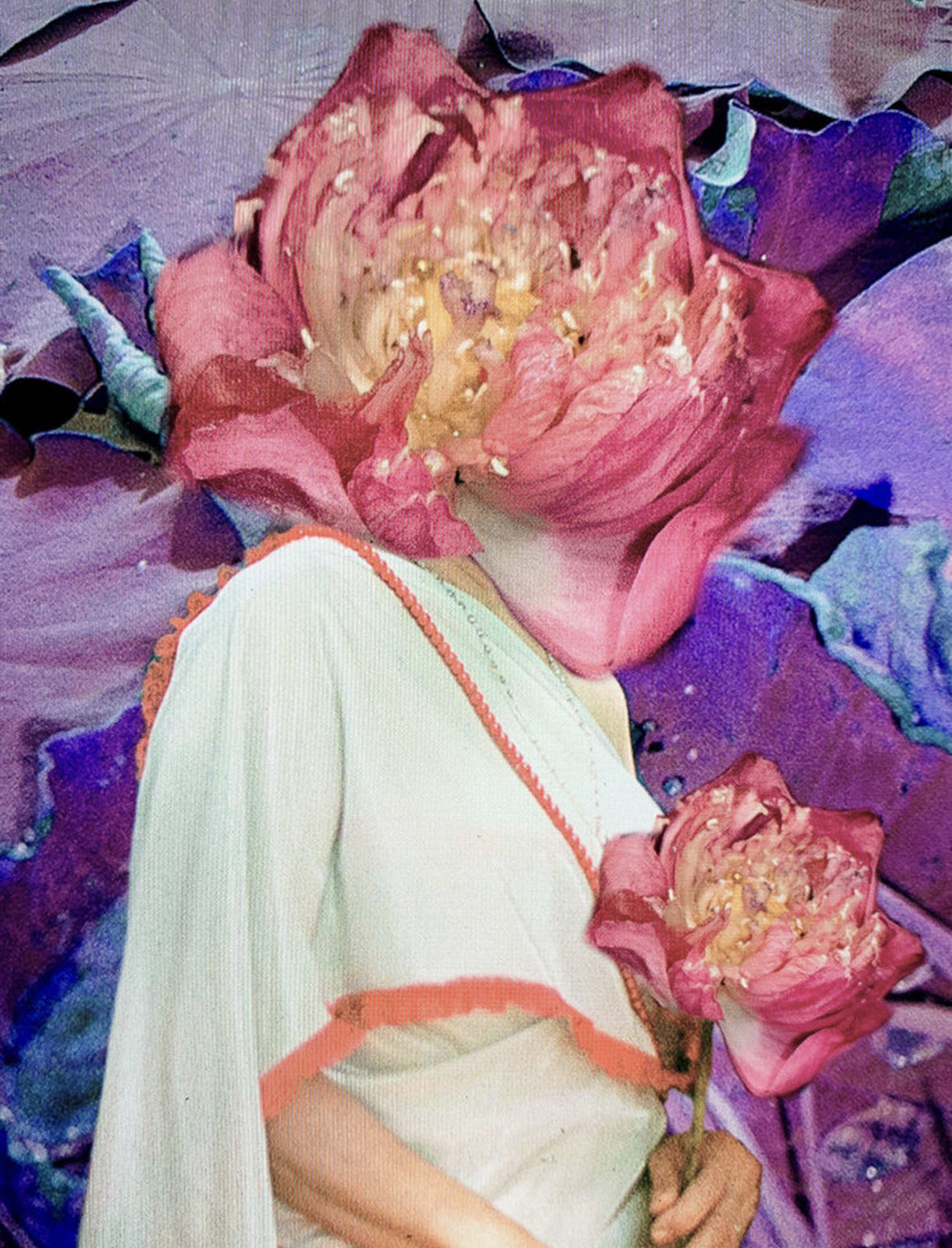 In Thai folklore, sex equates to temptation, and women—often the subject of temptation—are then punished for breaking taboo. Sukchai’s folklore retelling looks to subvert the stigmatized perception of femininity with a woman as the protagonist. In her story, she doesn’t look to shame desire, but celebrate it. The female protagonist’s predicament and outcome reflects Thai society’s attitude towards sex today. Sukchai doesn’t consider her work as feminist art, as she isn’t interested in being defined by the social constructs of gender norms. To her, the topic of desire and temptation isn’t bound by gender. 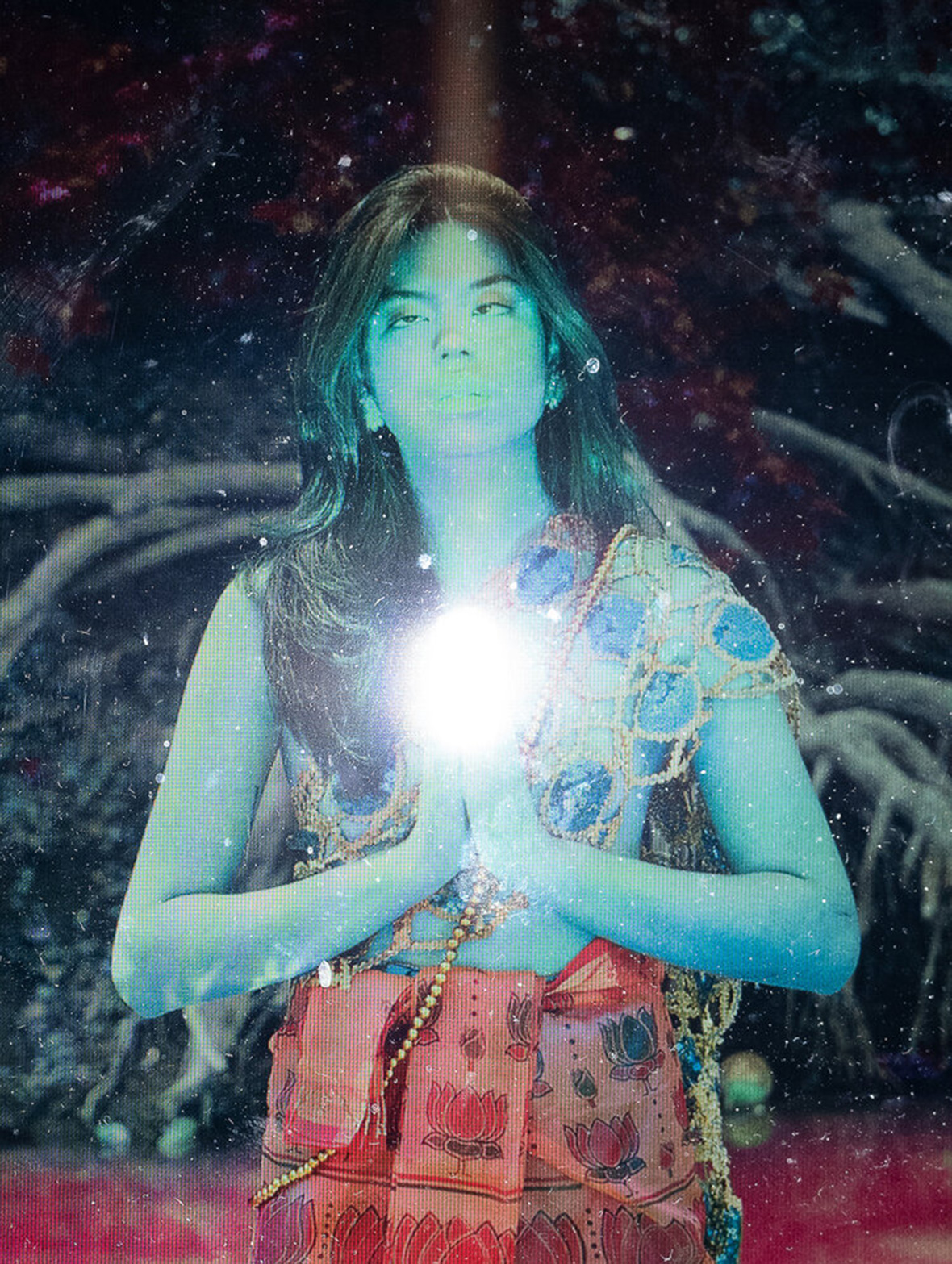