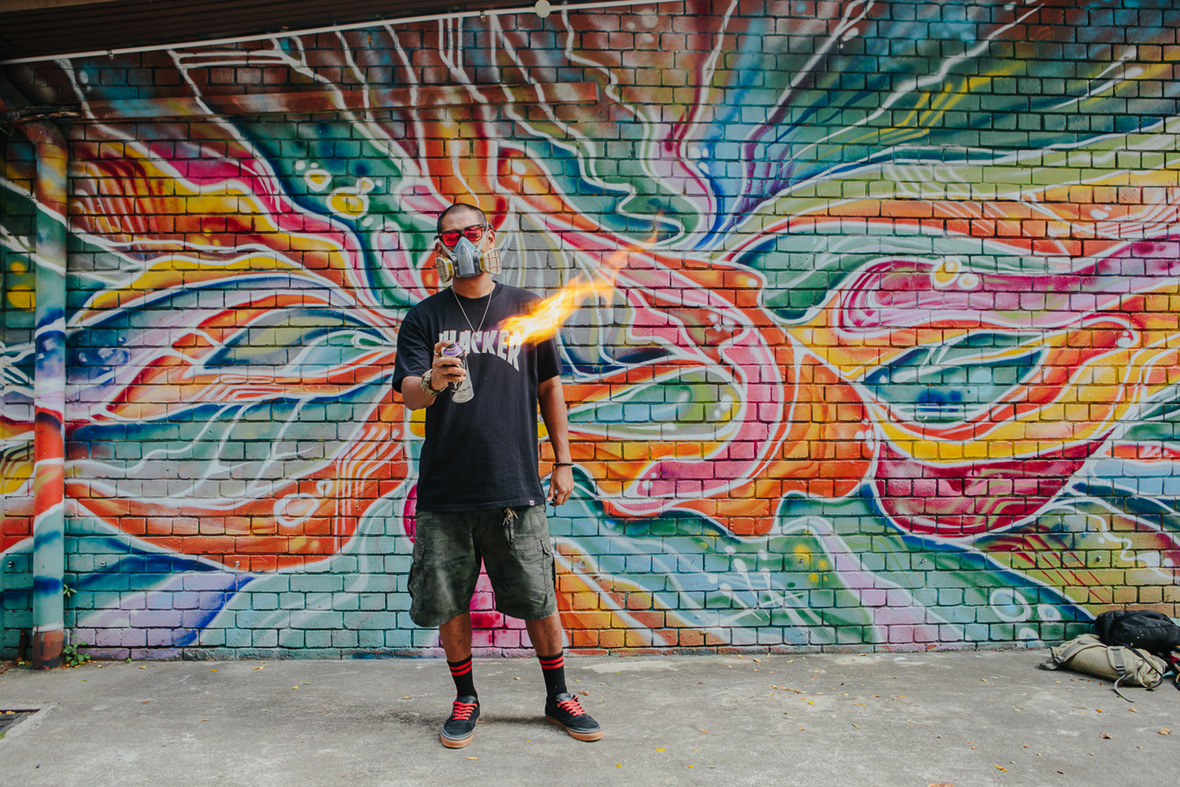 When people talk about the best cities for graffiti, Singapore, with its draconian anti-vandalism laws, isn’t usually high on the list. Yet it’s home to one of Asia’s most prominent graffiti artists Slac Satu—who co-founded the Zinc Nite Crew and became famous in a high-profile criminal graffiti case.

Slac got his start when graffiti in Asia was still young. Back in 1998, when neither he nor Singapore knew what graffiti was yet, Slac and his friend Monk began running around the city catching tags by night. They didn’t know anyone doing anything like this, though later they learned that another group called OAC had also been writing. 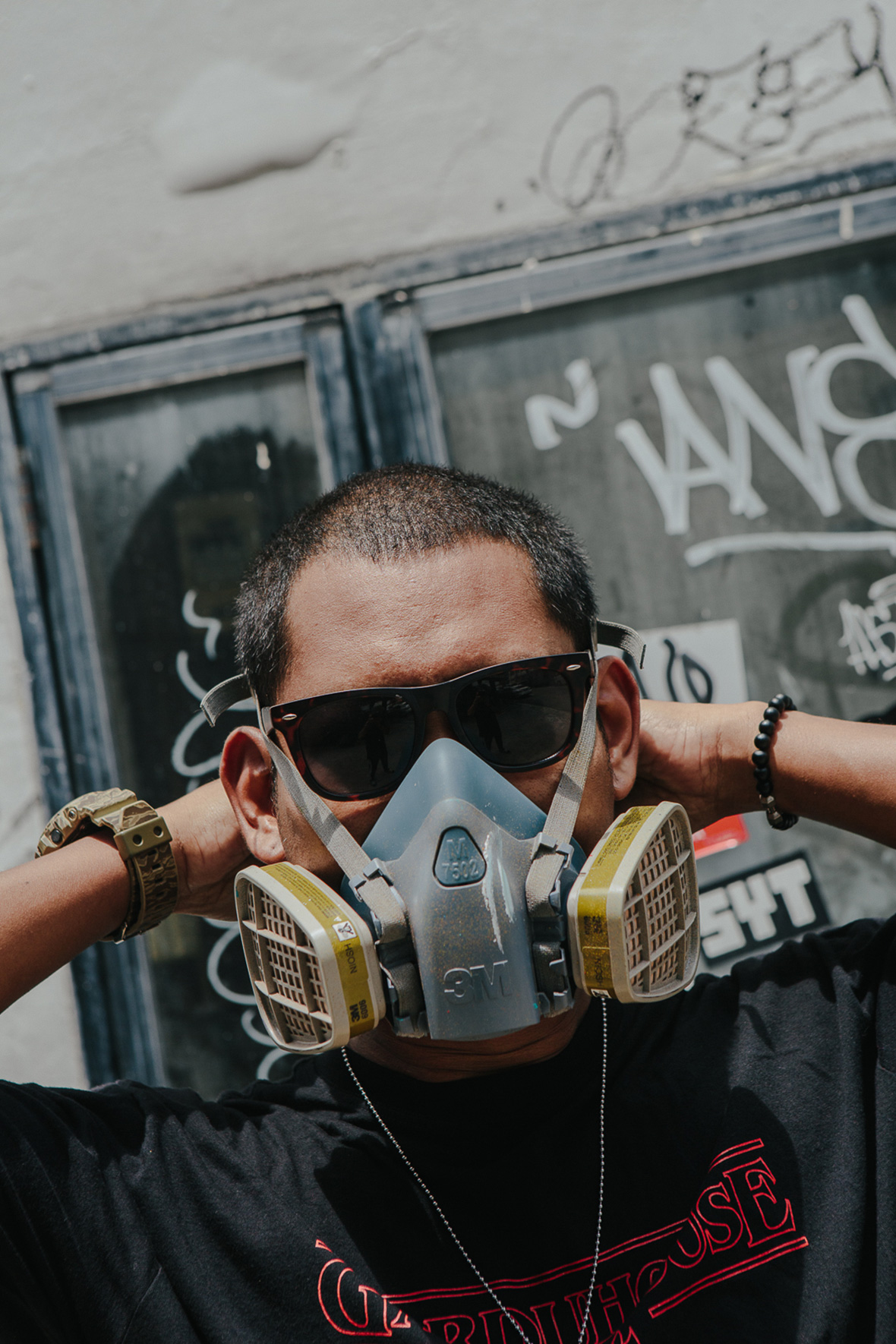 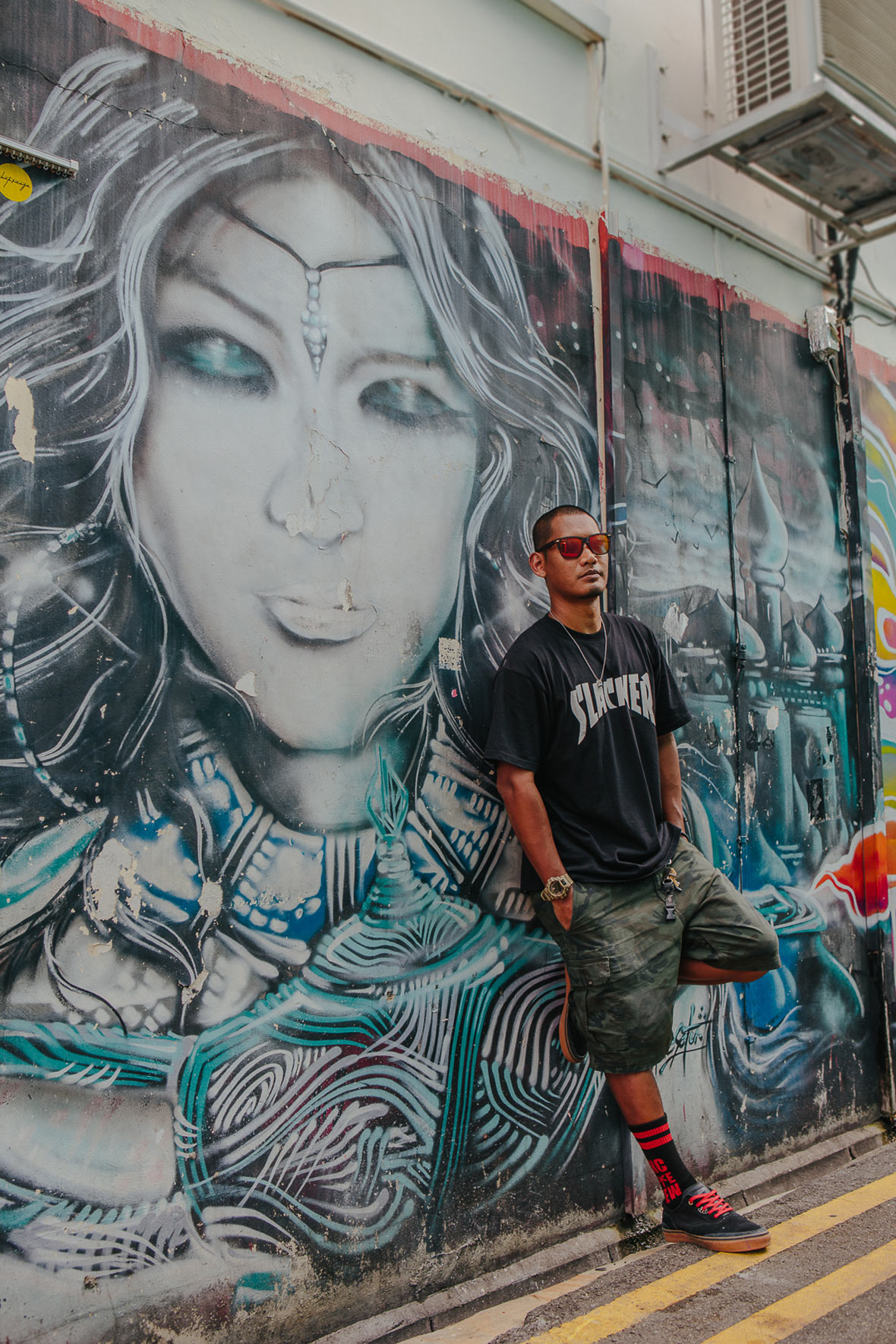 Though he was most inspired by American graffiti, Slac was thirsty for any scrap of knowledge he could find. “Skateboarding magazines had a lot of graffiti in them, so we’d spend hours studying the small pictures,” he recalls. Although they started out bombing—working illegally, getting their work up in highly visible spots—they were also fine-tuning their artsy skills in hidden spots along Singapore’s canals. 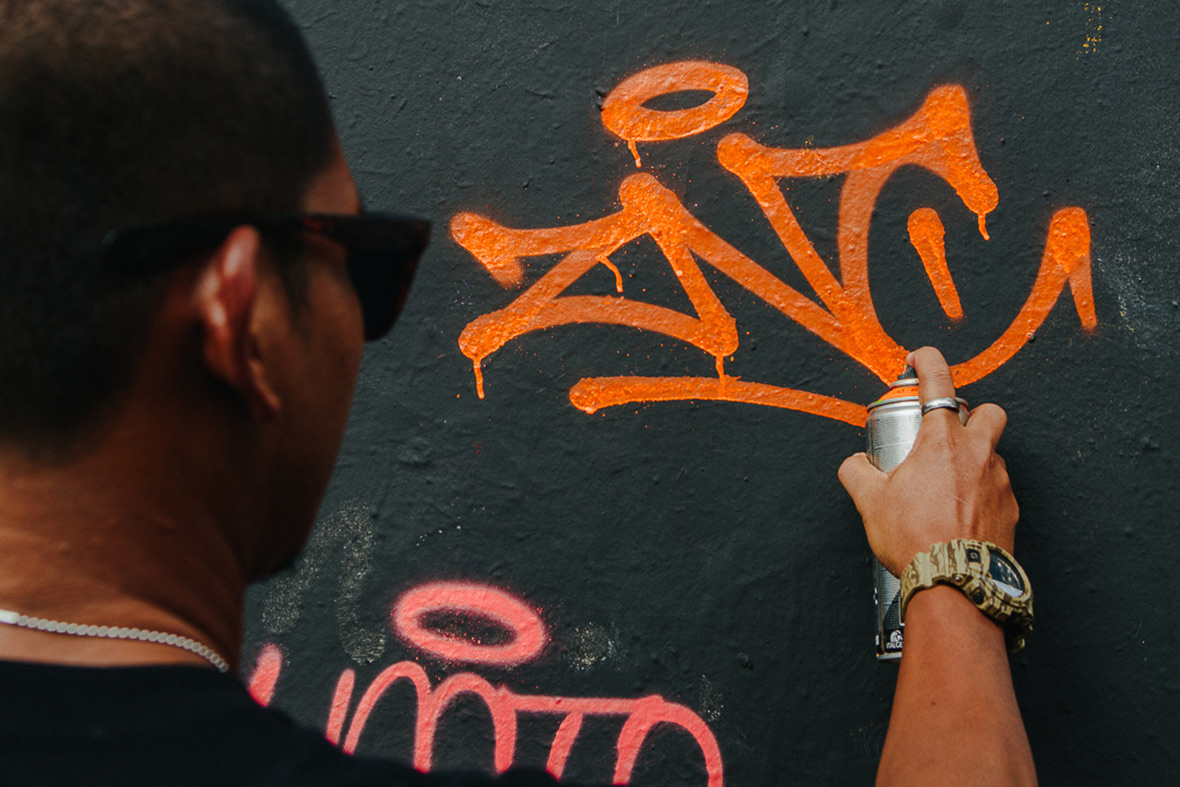 The public had no idea what to think in those early days. “At first it was quite chill,” Slac recalls. “A lot of times we’d just paint right out in the open in front of other people. They just watched in silence.” The honeymoon didn’t last long. Vandalism was on everyone’s radar, especially after an American had been sentenced to jail and caning for wrecking some automobiles a few years earlier. But Slac considered himself an artist. “I truly believed I was being creative and putting free art on the streets.” The police didn’t see it that way.

In 2000, the police arrested Slac and three other teammates. “They were already investigating us, but we didn’t know it,” he says. “We were ambushed one night and caught in the act putting our names up. I got away but had to surrender myself the next day.” He faced jail time, but after fighting the case for close to three years, he got off with one year of probation, a 9 p.m. curfew, one hundred hours of community service, and some hefty fines. He was also blacklisted for the next ten years. “When that happens, you end up on a ‘naughty list.’ If you’re looking for work, employers know it and getting a good job becomes a challenge.”

“ZNC was done for,” Slac says. “I was about to quit graffiti.” Luckily a friend signed him up for a graffiti competition, one of the country’s first. “I was stressed about the case, which was still ongoing. But we were just getting started.” So he went—and won. 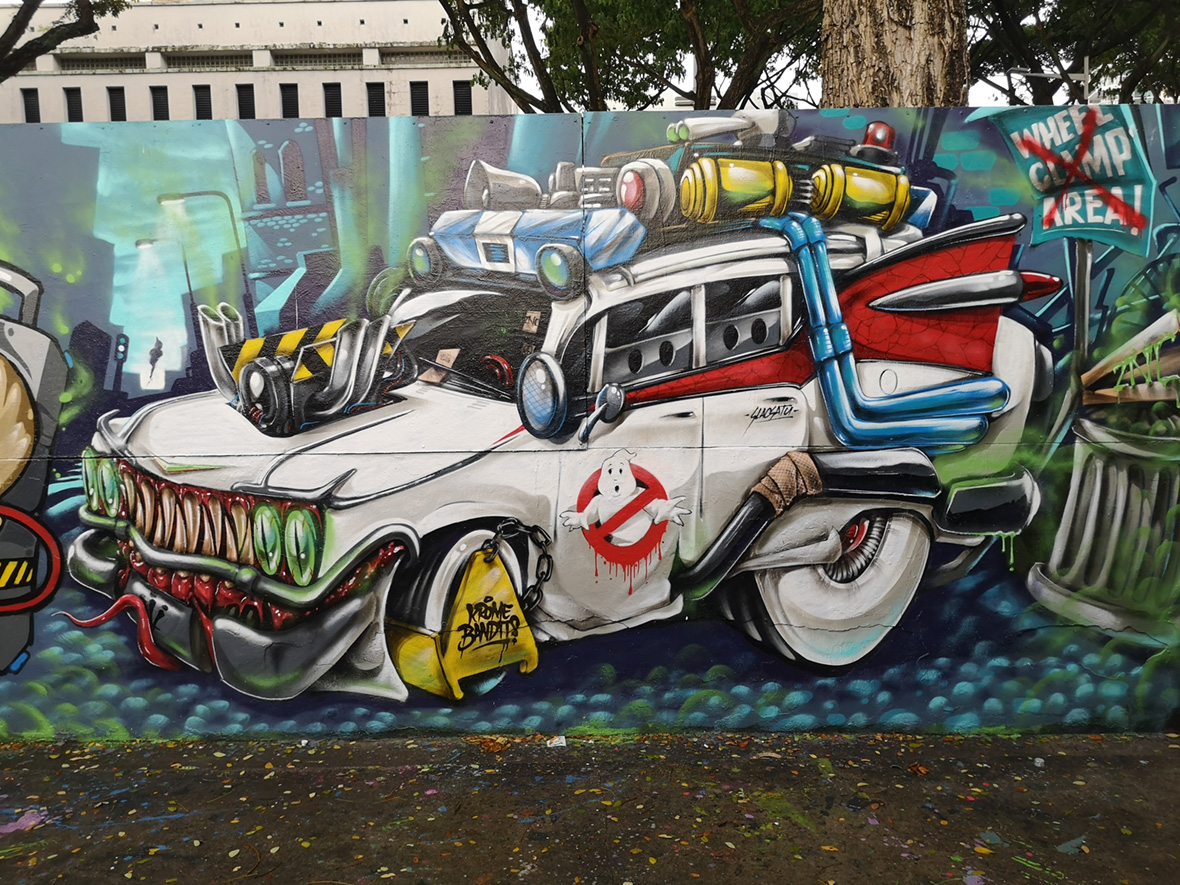 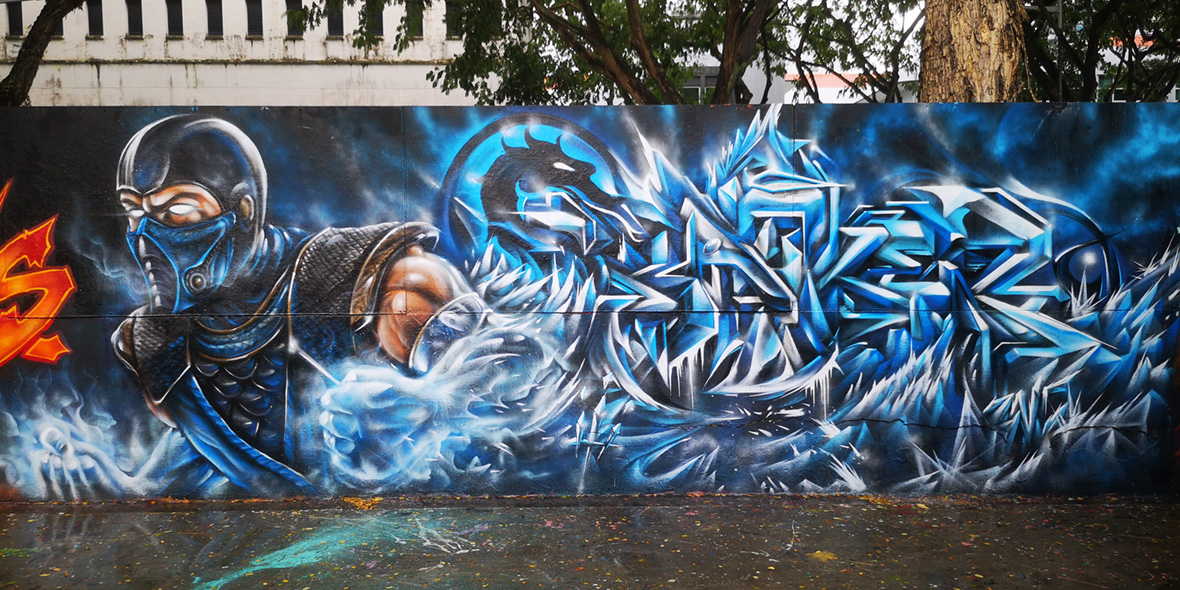 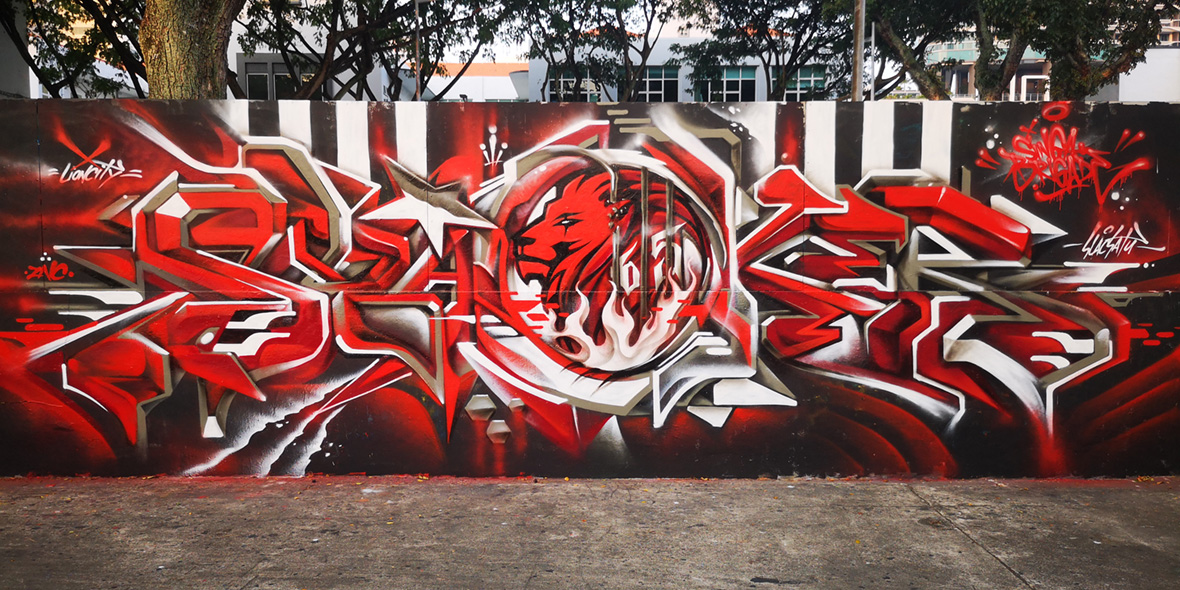 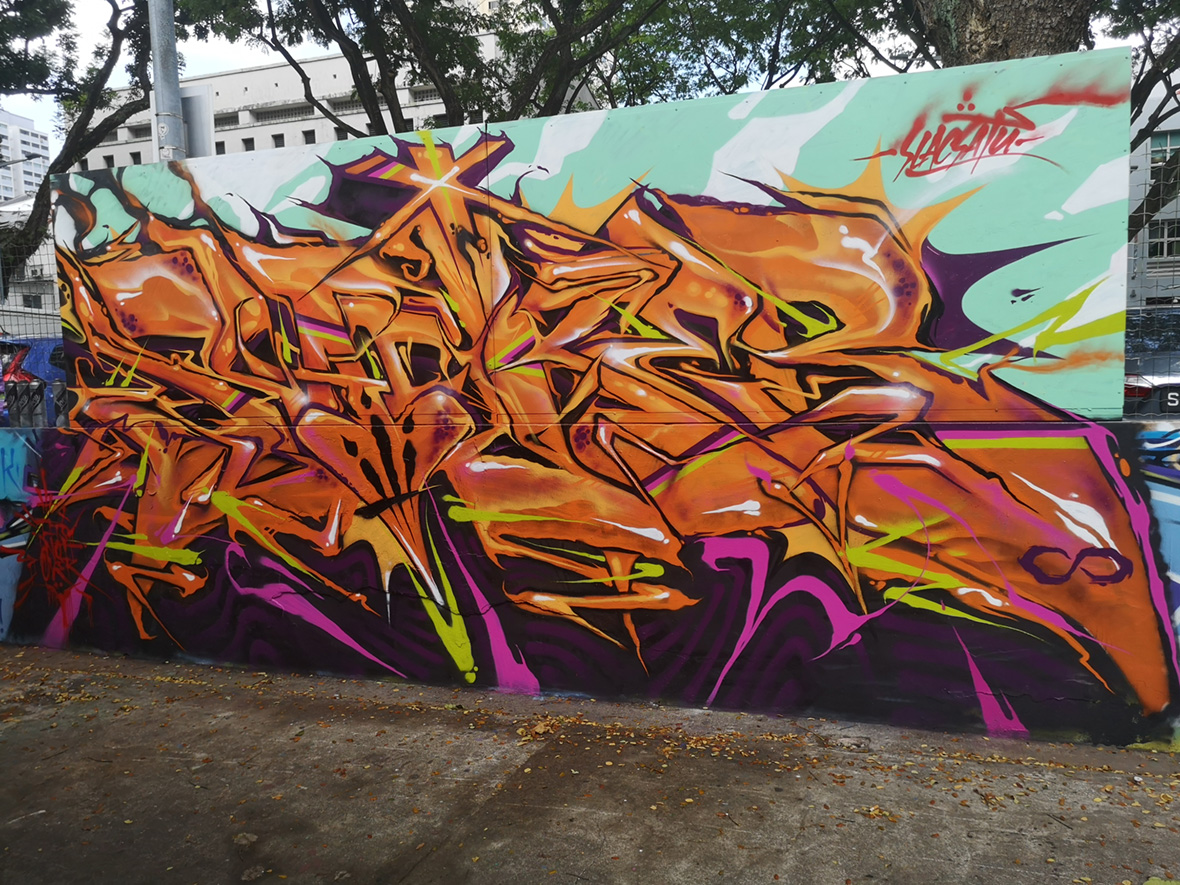 The victory was a clear turning point for Slac. It led to his first commission and made him reevaluate the possibilities of graffiti. “All of a sudden everybody knew who we were,” he recalls. “The case made the regional news. They were calling us the most wanted crew in the country. The other crews didn’t like that though, and it led to a lot of beef.”

By then the crew consisted only of him and his friend Monk. To keep ZNC going, they needed younger blood, so they started recruiting beyond the borders of Singapore. Soon, Phobia and his crew from Malaysia joined. Shake and his team from Indonesia were next. “We didn’t plan for it to become international; it just took its own course. A graffiti crew from Singapore with its strict laws, starting a worldwide crew? It didn’t seem doable. But I stood my ground for the team. They’re family.” A flame that was about to be extinguished eventually grew to a worldwide collective with 100 members at the time of this writing. 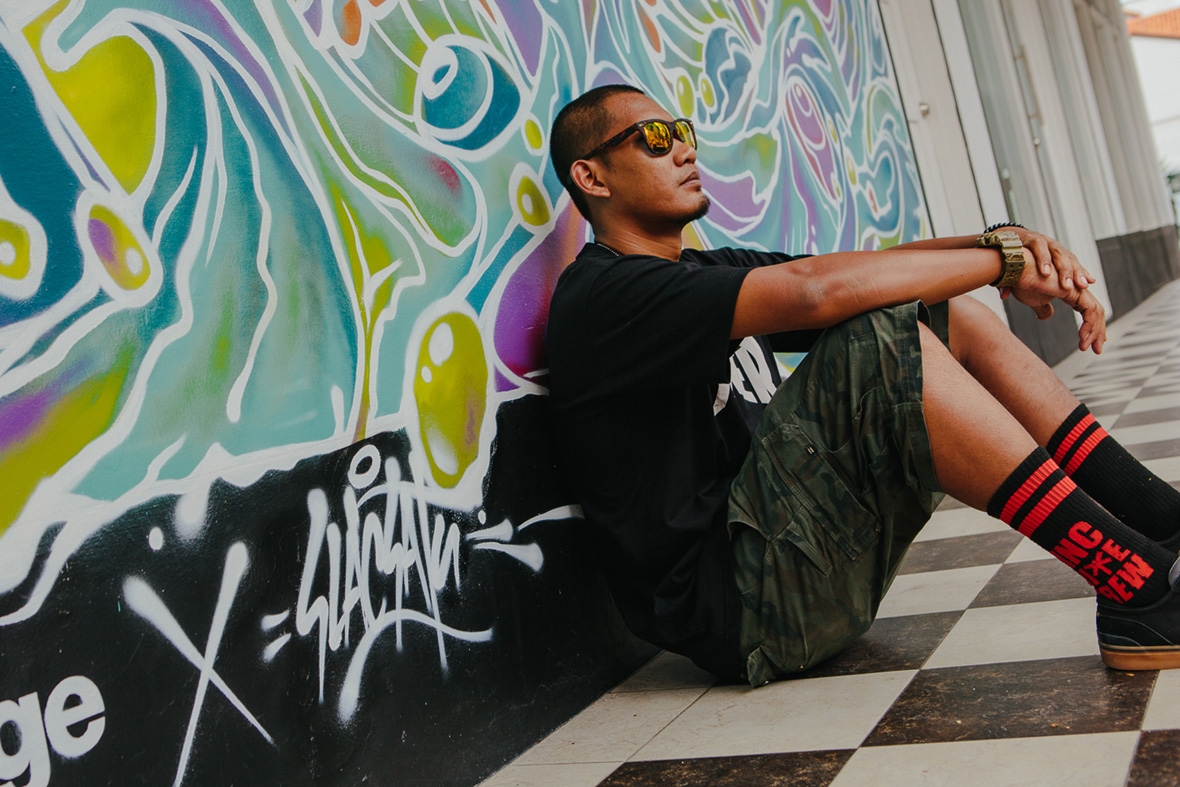 Around 2002, Singapore unveiled its first legal wall at a skatepark. Two years later it added another, and this became home to Slac and other local writers. Eventually new management started demanding to review mockups of anything that would be painted, stifling their work. He boycotted the space and began hunting for a new one. An art collective offered him another home, and eventually, Slac took that space over, turning it into the country’s new hub for graffiti, The Blackbook.

“I want to keep the crew and the scene tight, but we couldn’t do that without our own space,” he says. “With a studio, we can do so much more, focus so much more. It’s a work hard, play hard kind of mentality.” Blackbook proved to be the final missing piece for the country’s scene. The space has a graffiti shop that carries a wide assortment of paint and tools. There are walls people can paint freely. And people are always there, just hanging out, building bonds, and sharing secrets of the trade. “Our role is simple: keep the scene alive,” Slac says. “The next generation of writers won’t be left to figure it all out on their own like me and most of the pioneers.” 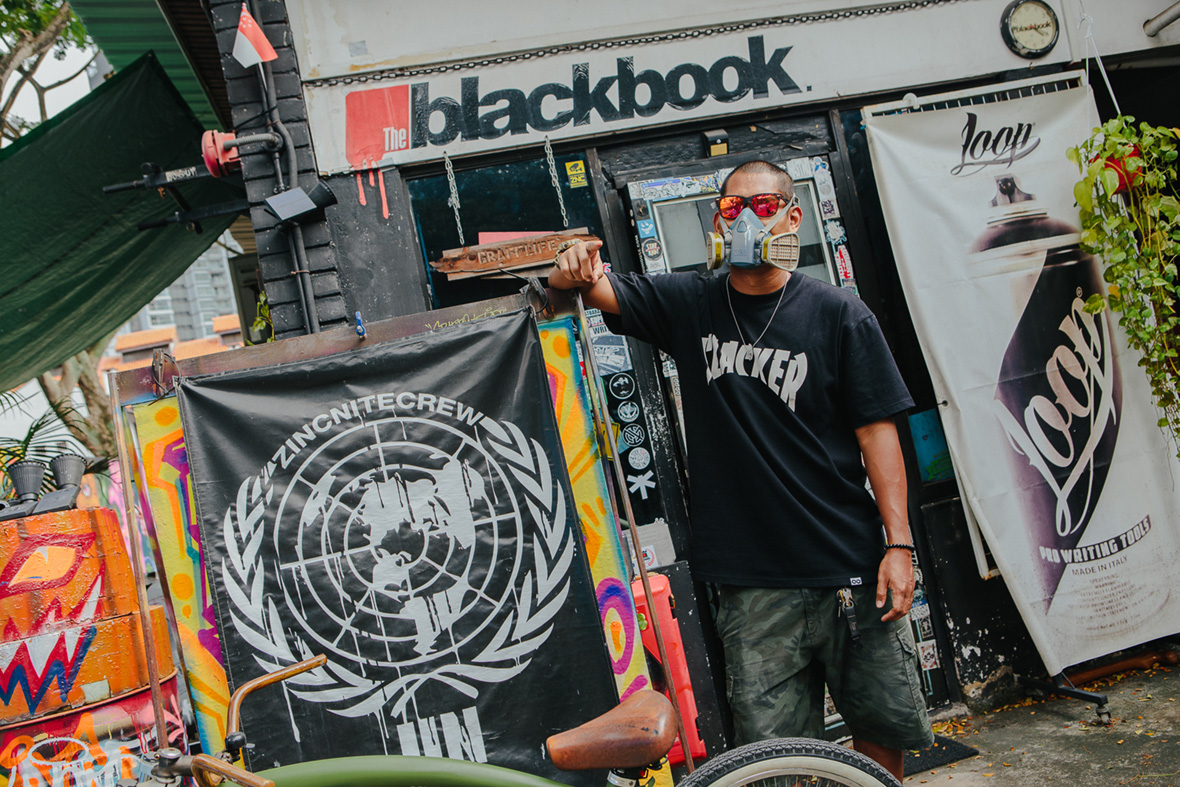 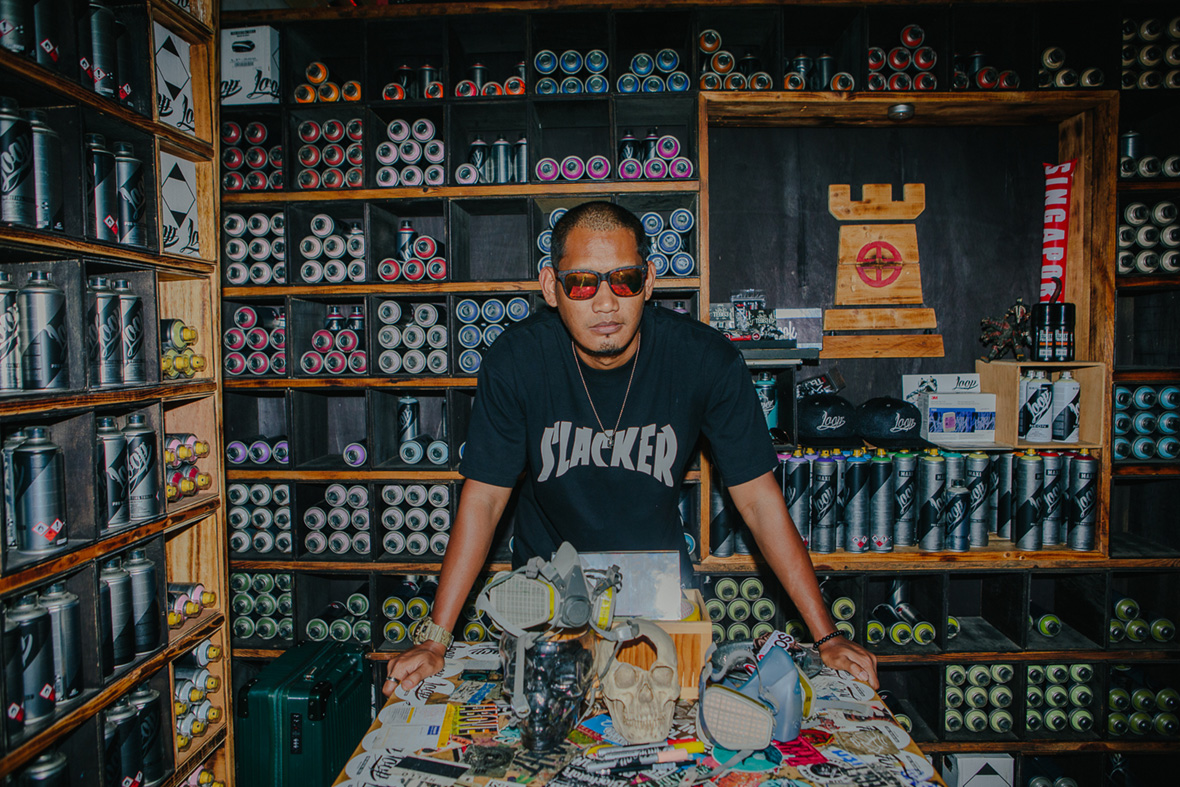 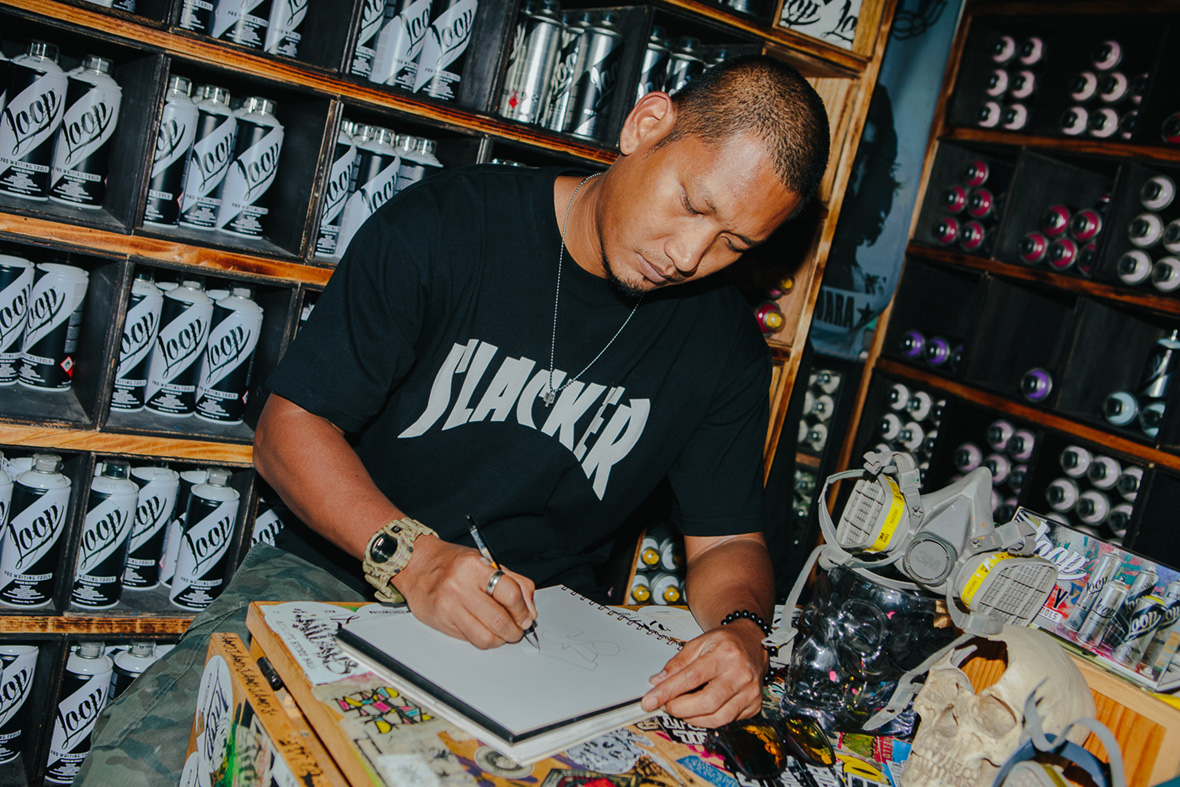 The authorities haven’t forgotten Slac, though. “There’s no more illegal graffiti in Singapore, that era is dead,” he says. “Whenever there are any new vandalism cases, the cops come knocking on our door. You want to go bombing? Sure, I understand. Just leave Singapore to do it.”