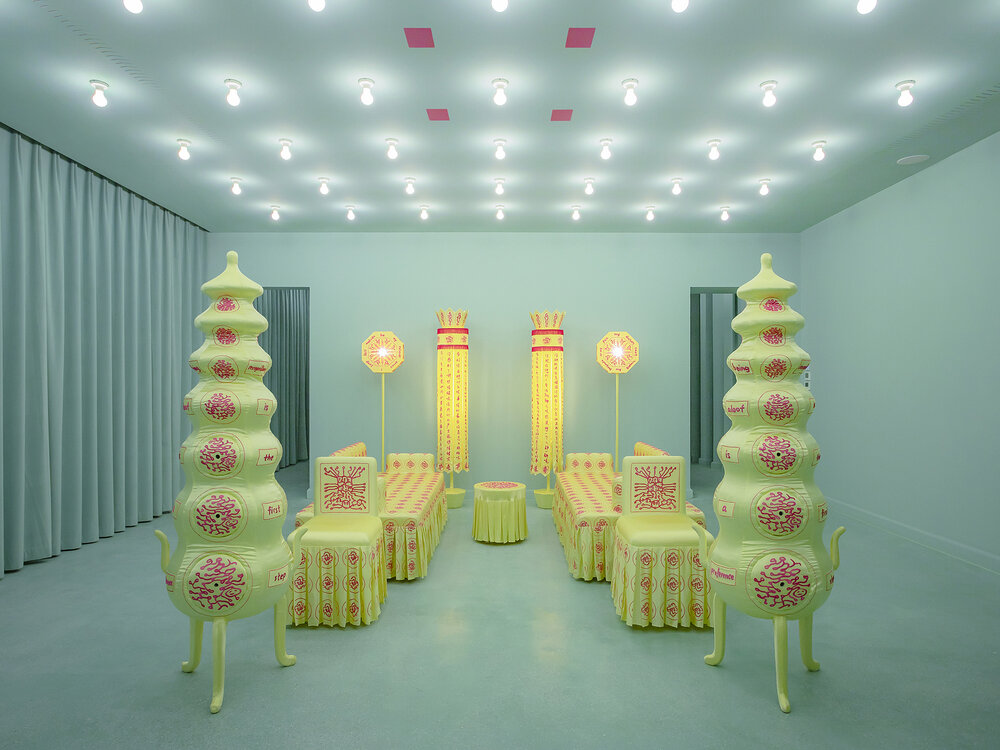 A hospital is meant to treat the sick, but when someone sees a surgeon’s gown or operating room, chances are it doesn’t make them feel better. Chinese artist Duyi Han wants to interrogate this disconnect, and his latest work explores how design, color, and tradition can impact people’s emotions and mental health. The installation, titled Ordinance of the Subconscious Treatment, is an immersive space that transforms an apartment into an “ArtBNB” where visitors are invited to reflect on conflicting and complementary forms of healing. 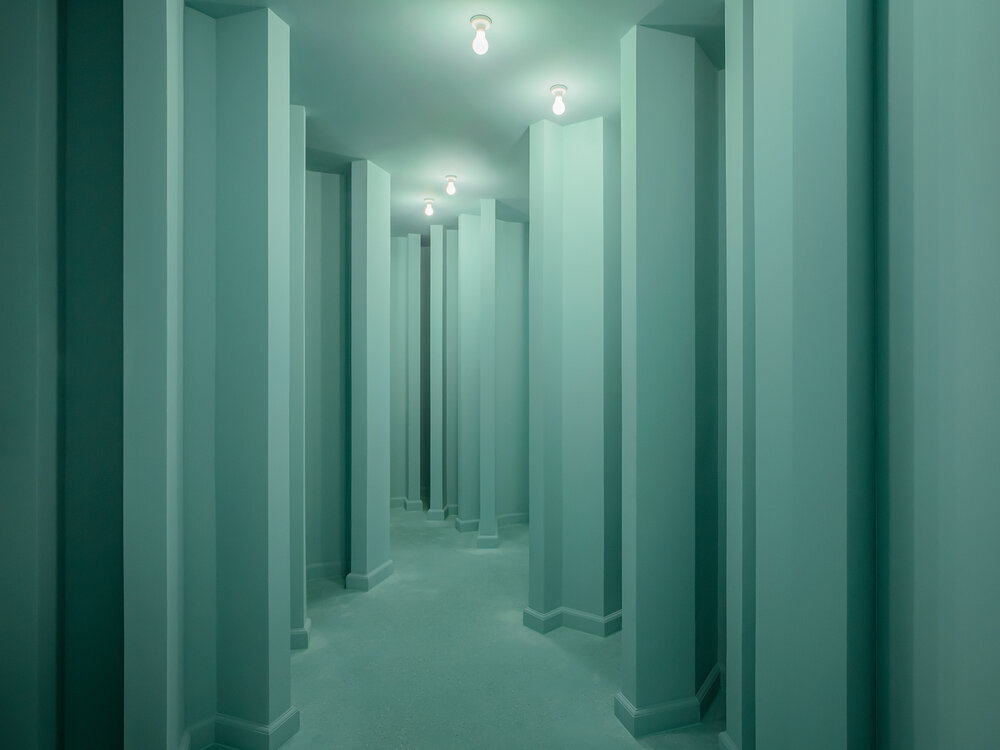 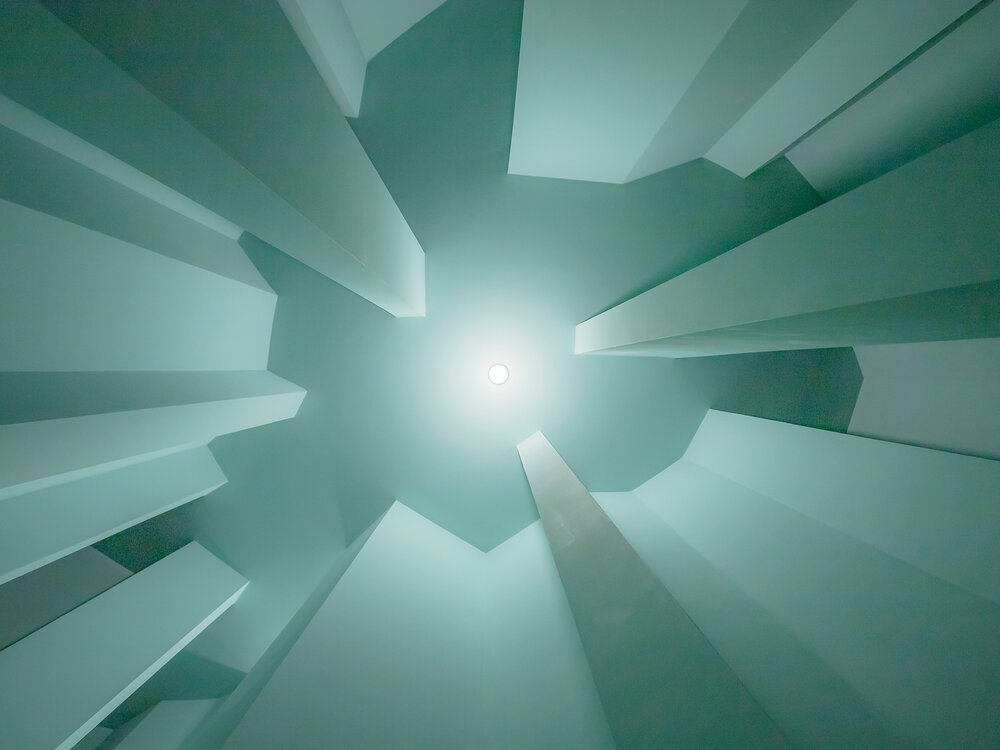 In the dreamlike apartment, certain rooms are designed to evoke a sense of familiarity for those who grew up in China. In some areas, that familiarity is punctured by a sense of the surreal. In one room, traditional ceramics piled onto a table are spotlit by a surgical light; across the apartment, a plain corridor with newly erected walls is transformed into a maze; the dining room and kitchen are slathered in pink and furnished with retro-futuristic appliances; and in other parts of the space, furniture is embroidered with the molecular structures of various prescription drugs and neurochemicals. The most notable feature of the apartment though is the soothing green paint that covers the majority of the rooms, which is Han’s overt way of referencing hospital settings.

“Around the world, you see a lot of this similar kind of green in hospitals, even on their websites and staff uniforms. Historically more than now, but it’s still a landmark color that’s associated with them,” he says. “But I chose a green that’s warmer and feels softer, I wanted it to be calming.” (The pink areas, he notes, are meant as a way for the viewer to take a break from the green monochrome, a means of cleansing their visual palate.) 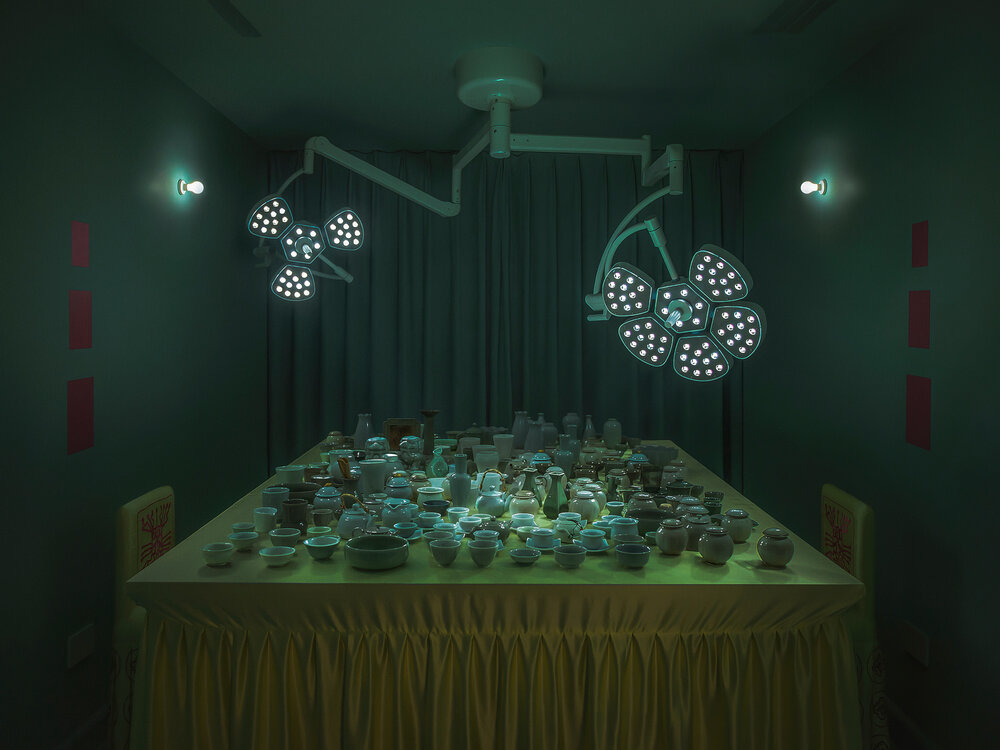 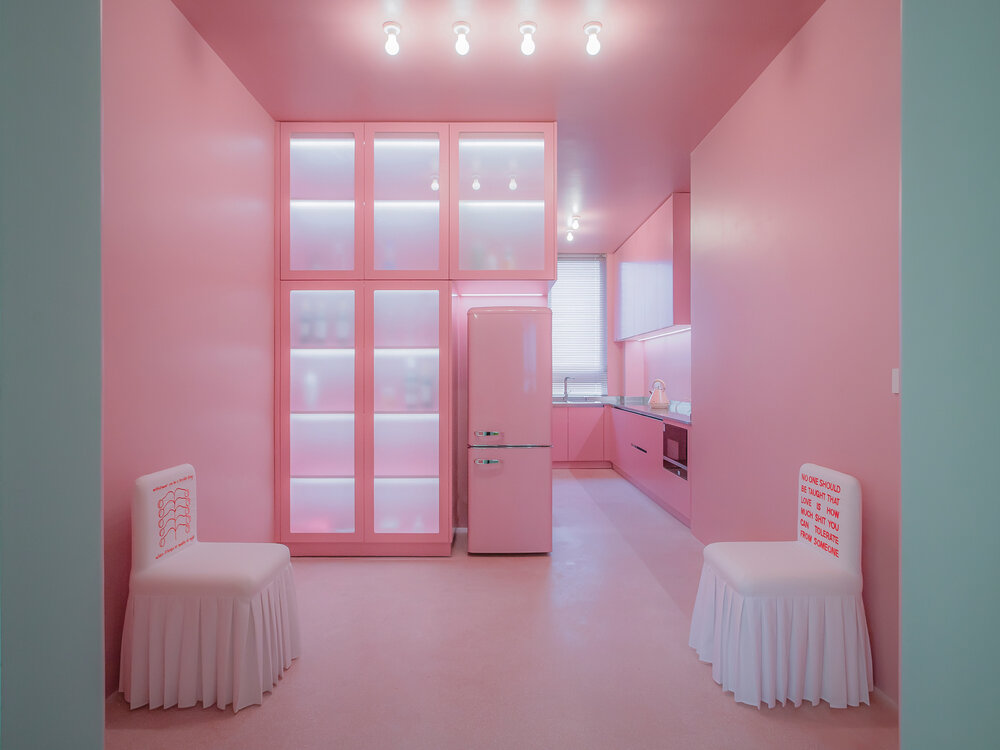 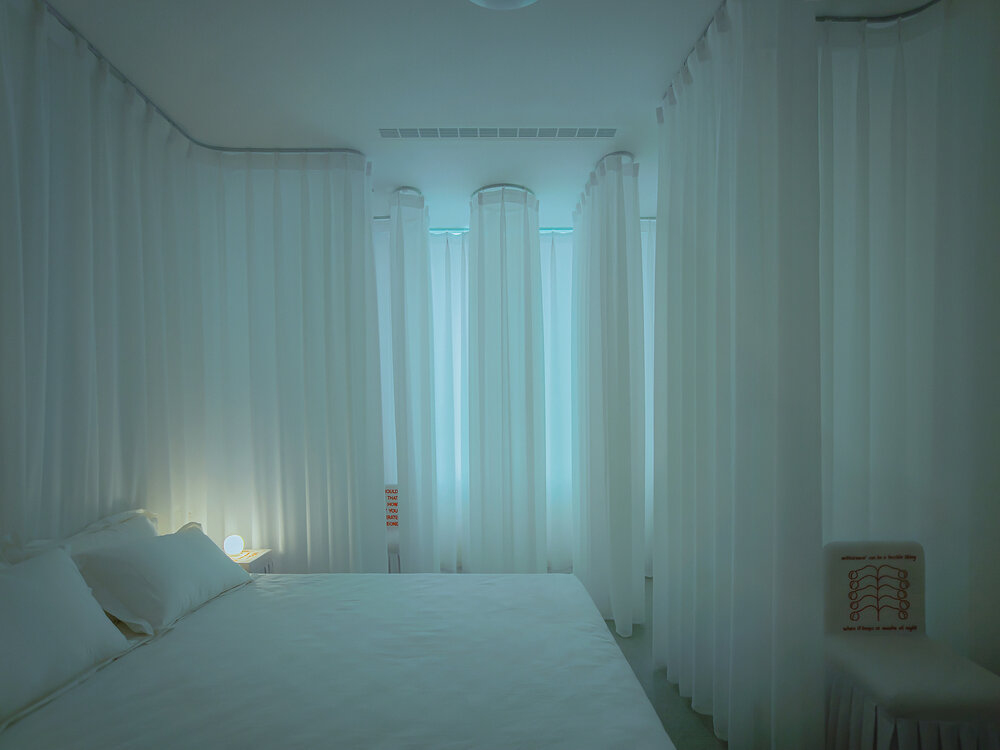 Han was born and raised in Shanghai, and the city’s incessant rate of change and massive size inspired his early interest in architecture. In elementary school, he was already creating imaginary cities and maps with Windows Paint. In university, he was drawn to more specific and expressive design fields. “I slowly realized that the more interesting architecture and design are smaller-scale projects and interiors,” he says. “Designing rooms can be very intimate and artistic in comparison to the process for larger buildings, which are more technically oriented, have more limits, and involve larger teams.” 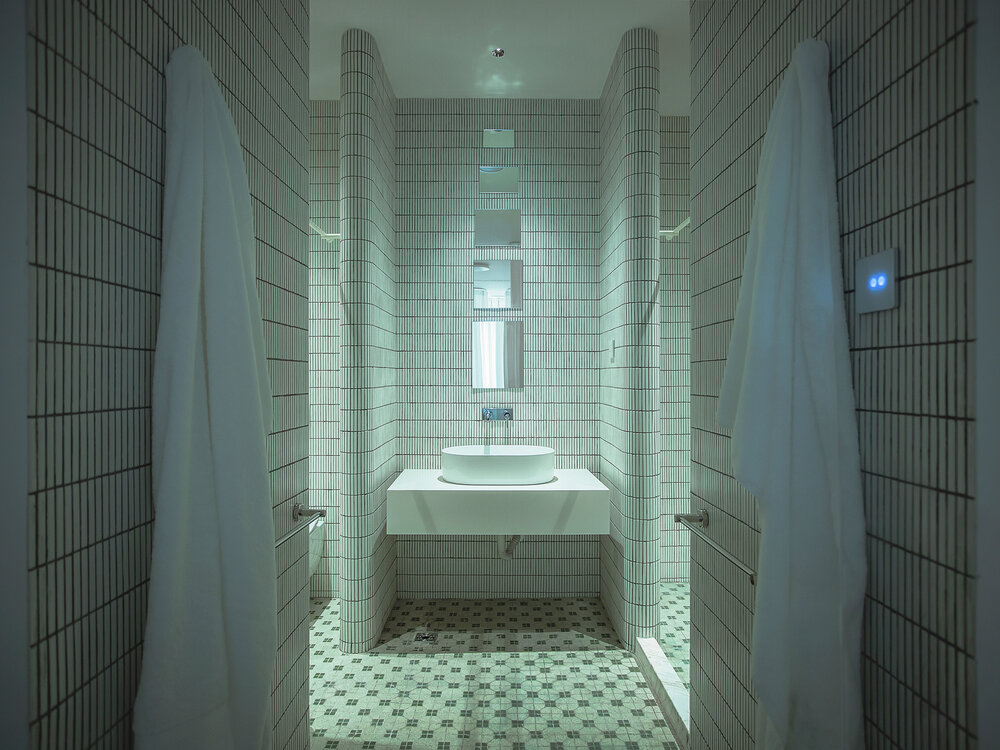 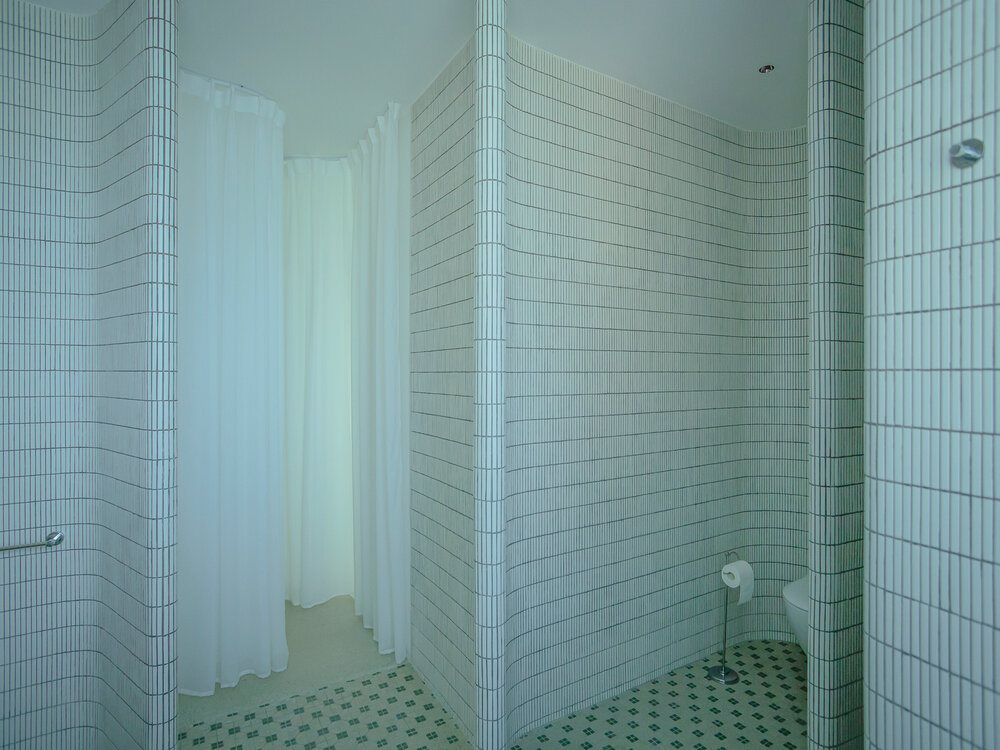 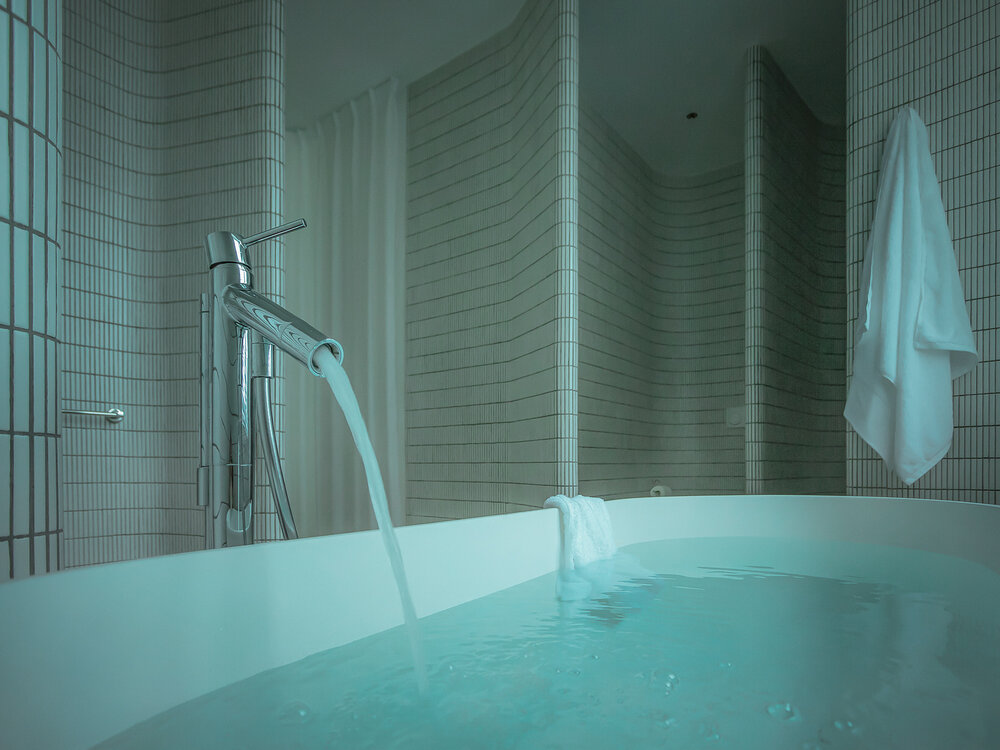 His work today often culls inspiration from the past, with a strong focus on retro movements and the traditions of China. “Aesthetics from the past move people and evoke rich feelings,” Han says. “I look to respond to history and heritage to see how previous things can be used in new and contemporary ways.” His earlier series, Different Tendencies, featured a collection of furniture by Italian designers from the 60s and 70s situated in computer-generated settings inspired by moments in pop culture. Rainbow-shaped tube lights designed by Ettore Sottsass were placed in a craggy terrain based on the album cover for Led Zeppelin’s Houses of the Holy, while an angular chair designed by Nanda Vigo was situated in the iconic spaceship from 2001: A Space Odyssey. 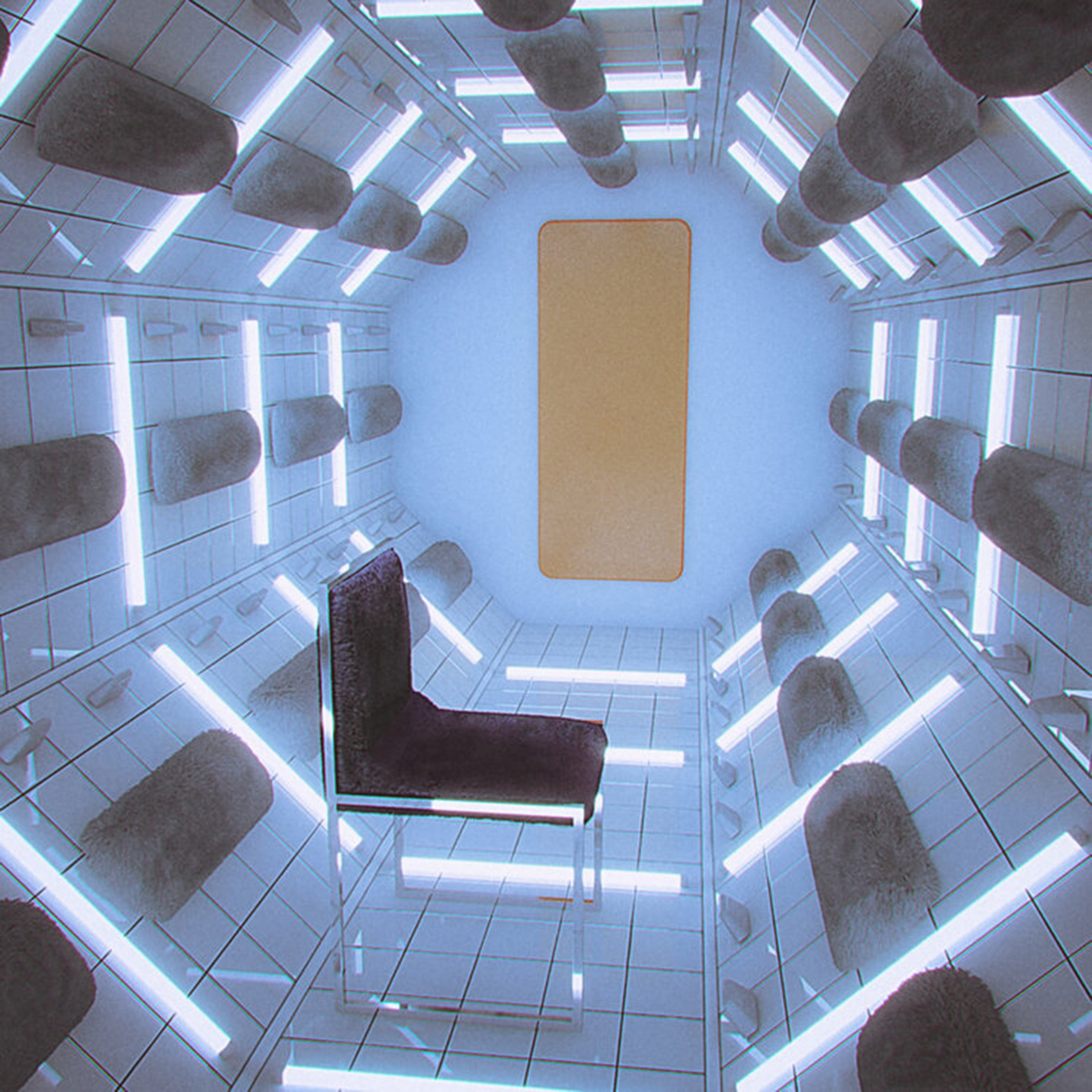 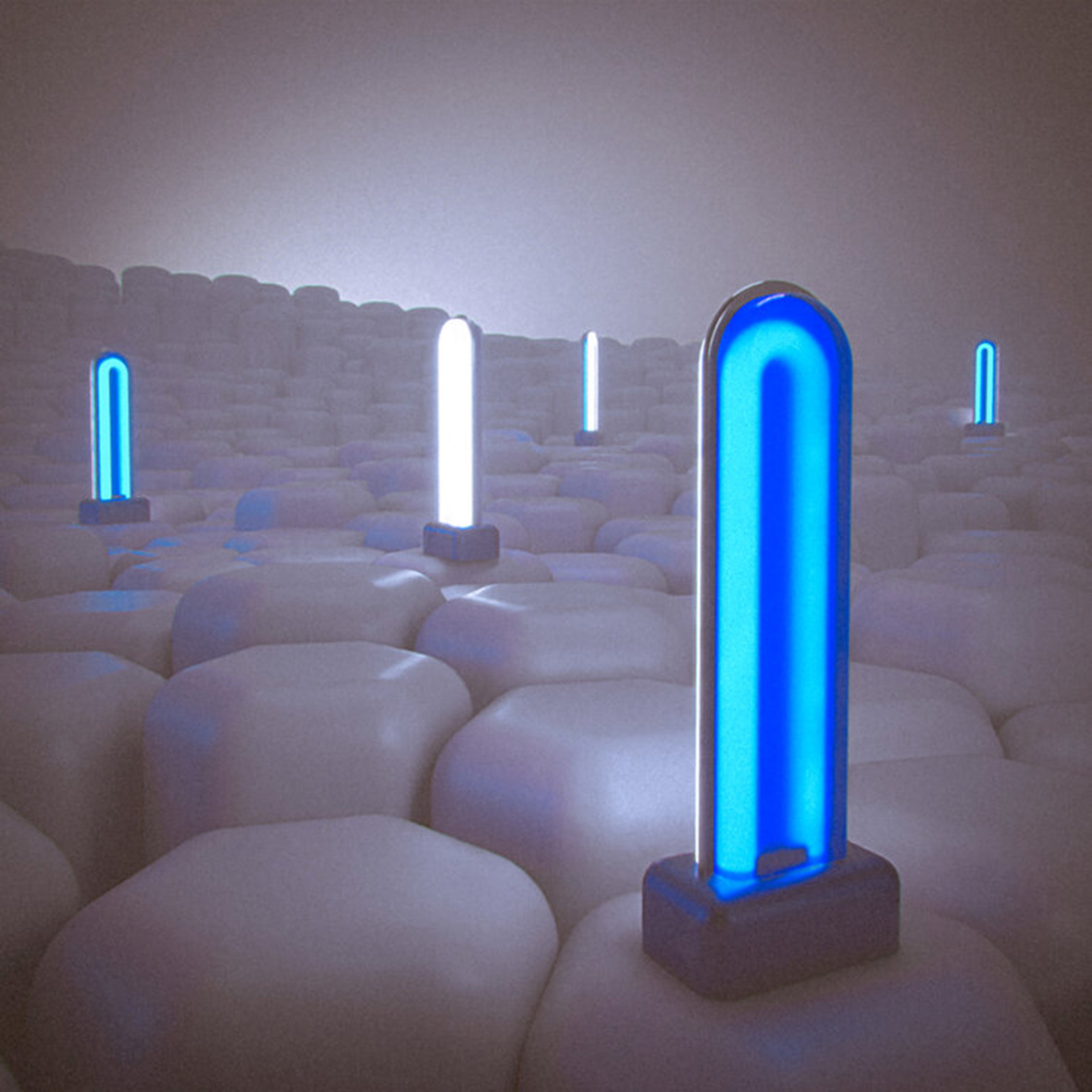 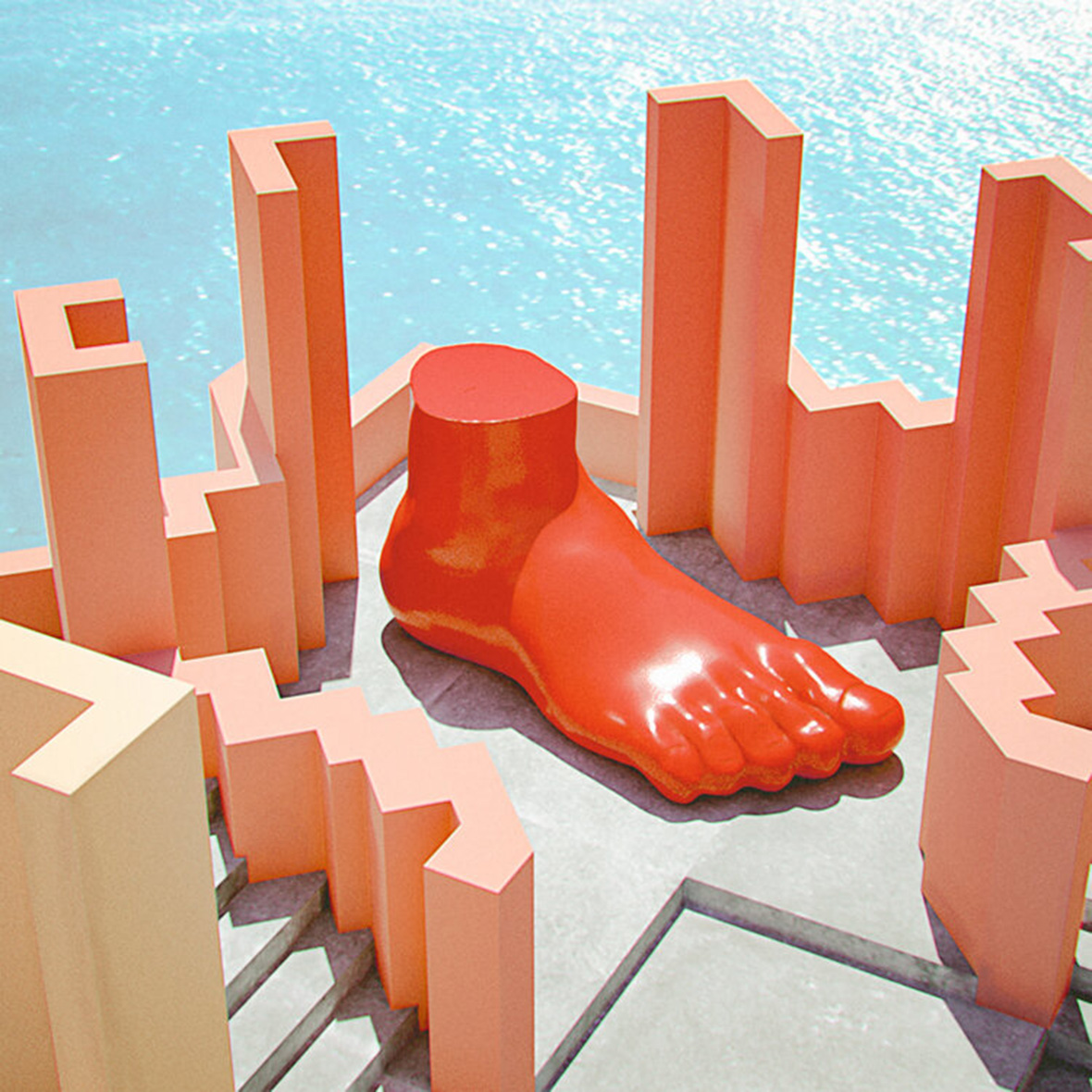 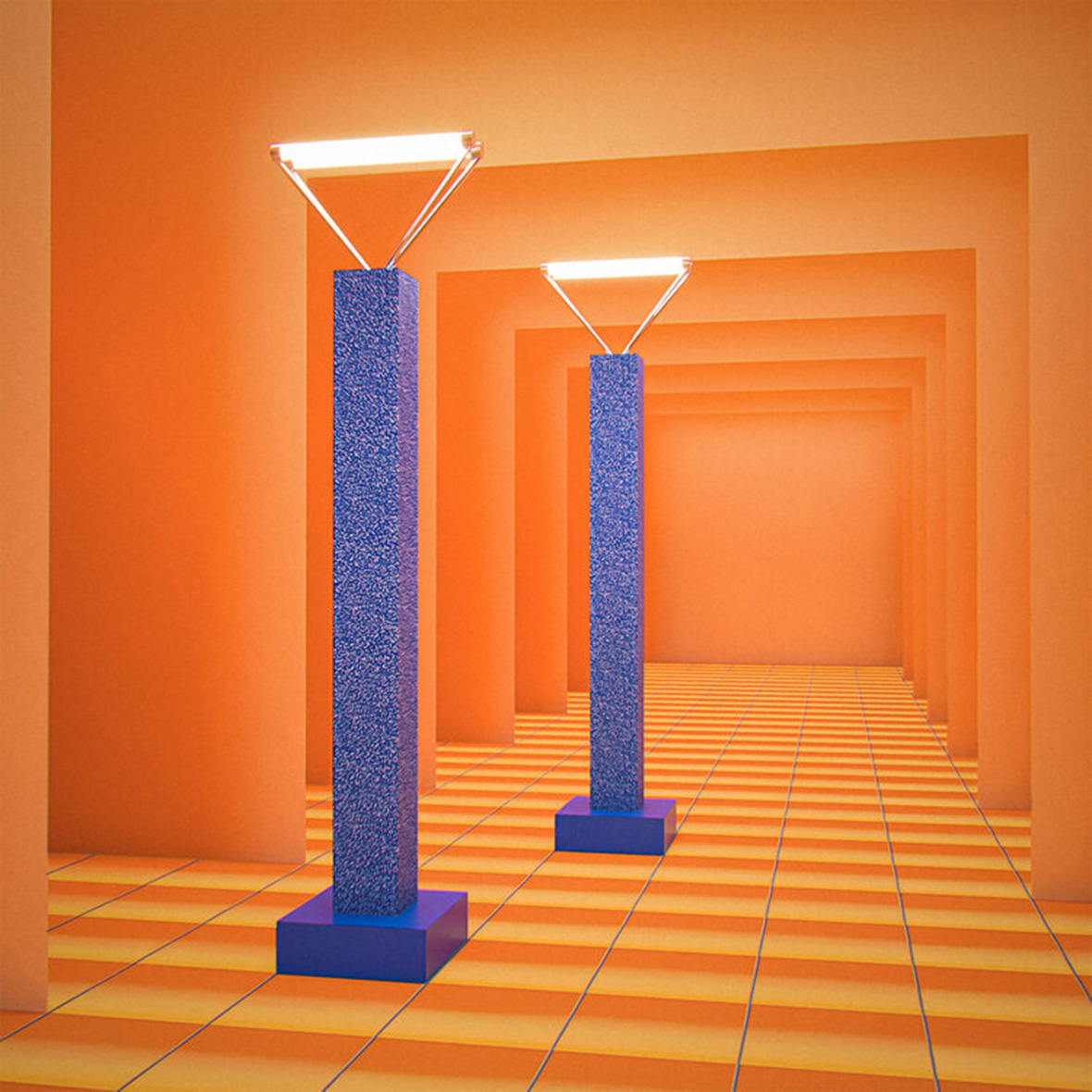 Although photos of the recent Subconscious installation can easily be mistaken for CGI, it’s entirely physical. At times, the colors of the rooms are so rich, they infuse the whole space with their features, much like a digitally altered image might. But Han says he doesn’t even use colored lights for the photographs, instead relying on a mix of natural light and neutral white light. The paint has a certain amount of reflectivity and the time of day can affect the color of a room, so depending on when the apartment is viewed, the vibrance and shape of a room changes.

The concept of mental wellness is central to the installation, and his lamps and furniture are the most literal means of shining light on the topic. Many designs, embroidered with text in both English and Chinese, speak directly to the theme of mental health. One lamp titled Dopamine reads, “My doctor can’t explain my symptoms or my pain.” Another titled Serotonin-Sertraline presents questions that a therapist would ask, such as “Do you feel satisfied with your decision?” and “What would you do differently next time?” 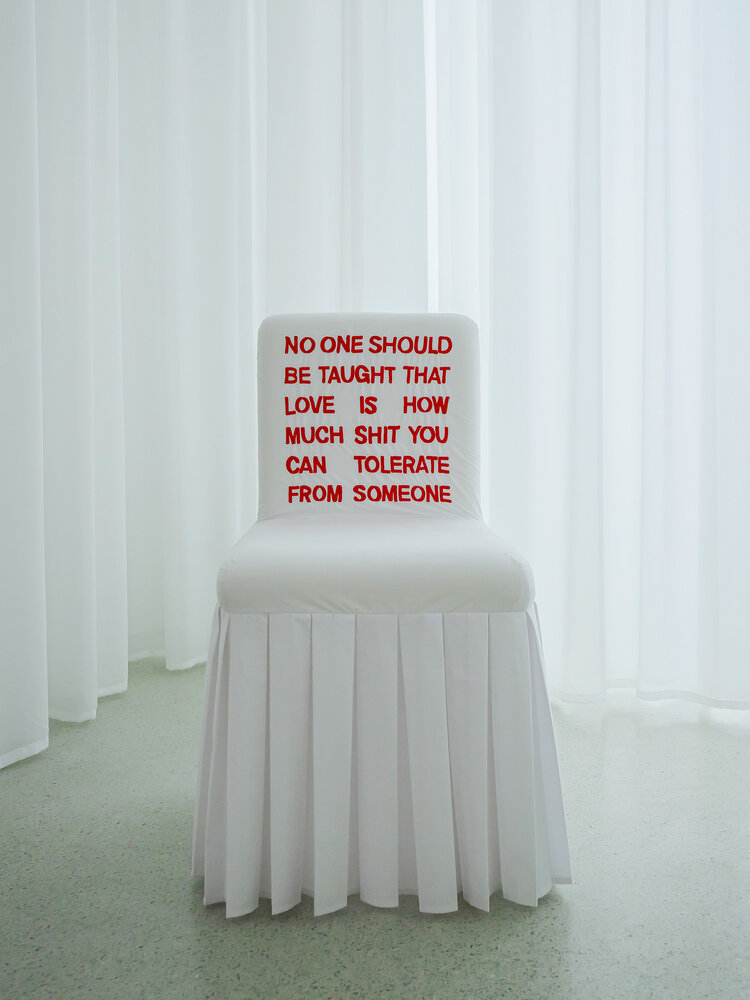 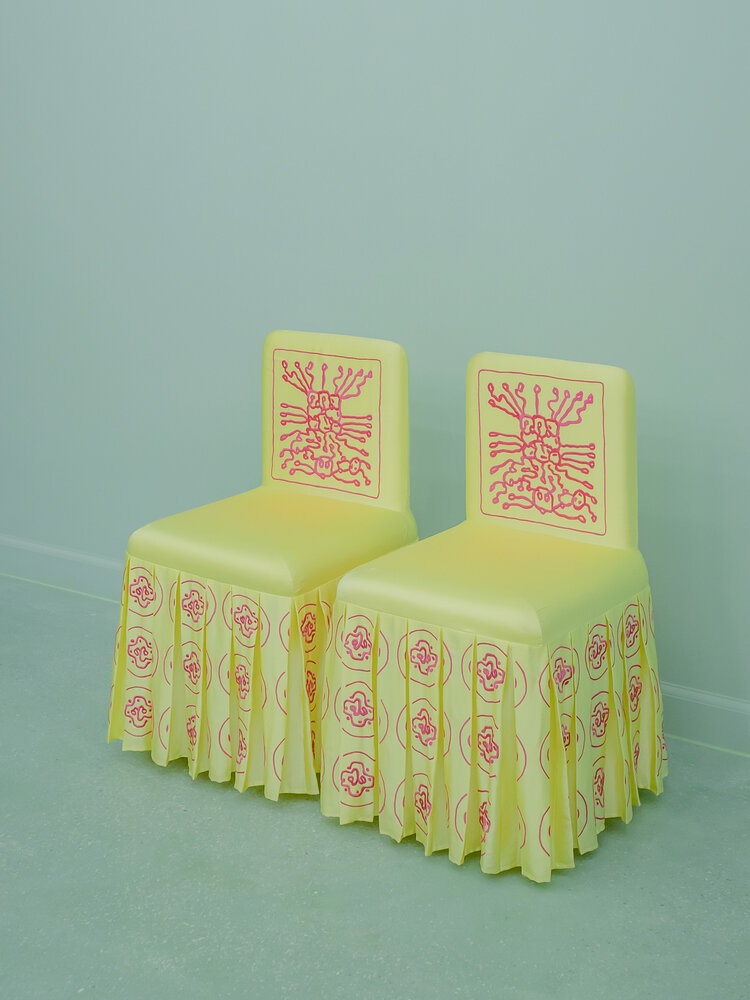 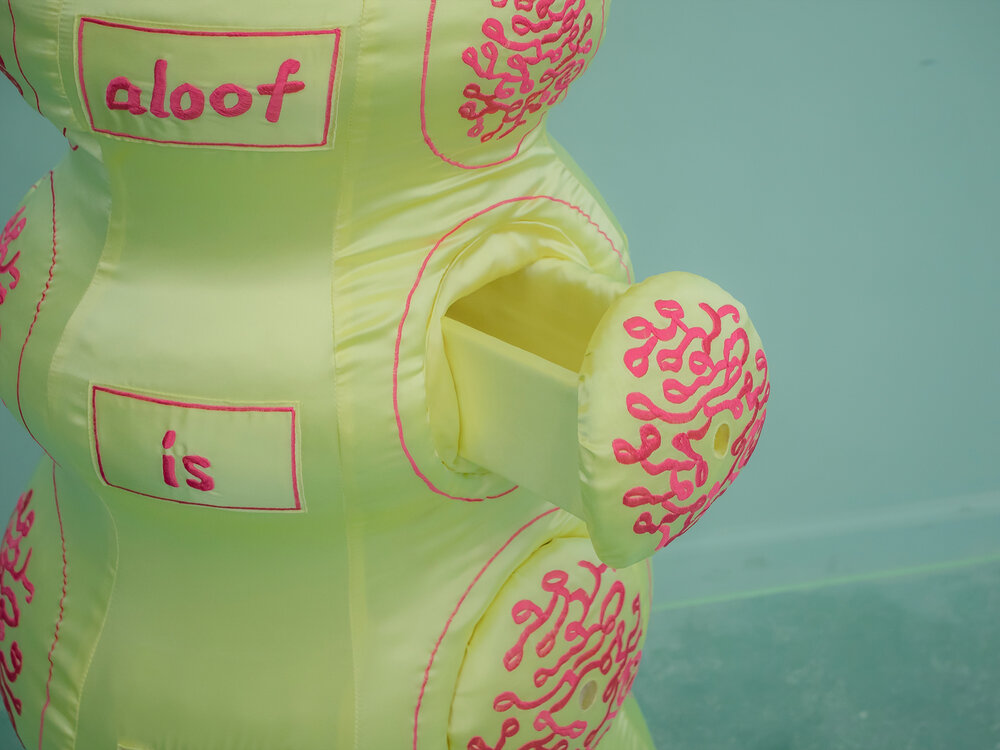 Awareness about mental health is still lagging in China, Han says: “When you look at the stats and really talk to people, it’s clear that there are a lot of things that still need improvement. There are more and more people interested in systematically educating themselves about well-being and mental health in a modern, scientific way. But the majority of the older generation are not really open to learning about this. Issues resulting from generation gaps are pervasive and create a lot of problems. My friends and schoolmates have made me realize a lot of issues are quite common in different families and situations. When there are personal emotional issues between my parents’ generation and mine, emotions are kept in check and there is rarely much of a healthy process of sorting out feelings. My generation shows more individuality and investment in emotion-related communication.” 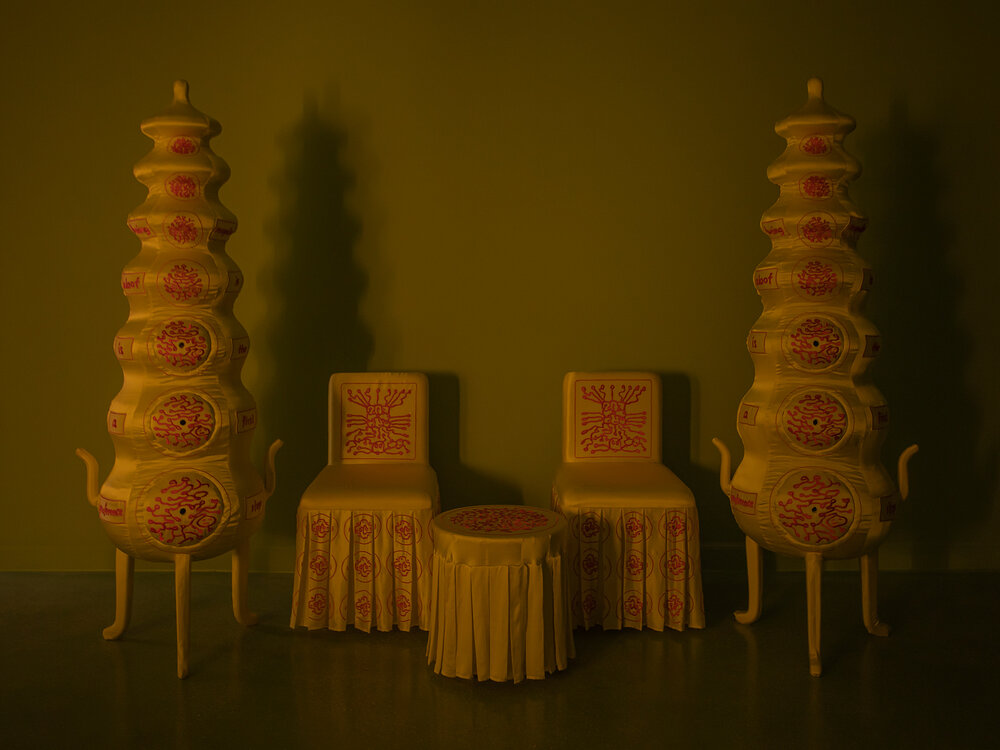 Han addresses this directly in Subconscious by utilizing traditional objects, fabrics, and crafts pulled from regional and religious heritage. Serotonin, for example, is based on Chinese ceremonial objects like the Buddhist parasol, while Dopamine is inspired by Taoist furniture and diagrams. To create these pieces, he worked with experienced craftspeople trained in ancient Suzhou embroidery, a craft that has existed for centuries in the area that the apartment is located.

“I used these local religious devices to represent more contemporary content that is maybe more relevant to people’s lives,” he explains. “It’s a heritage that many people are familiar with but don’t really interact with in their daily lives. Someone might visit a temple, but they don’t necessarily have an altar in their home or anything.” By doing so, he hopes to draw out their meaning.

“Certain parts of religion are geared towards helping people relieve their pain and pursue well being and happiness. In a way, this is the same objective in psychology and medication. They have the same goals but use different means. It’s primarily meant to represent what people believe today, rather than actively telling people they should do this or that for their mental health. It’s not an active critique of the overdose of certain chemicals or idolization of conventional beliefs in religion. It’s open to interpretation and promotes discussion.”