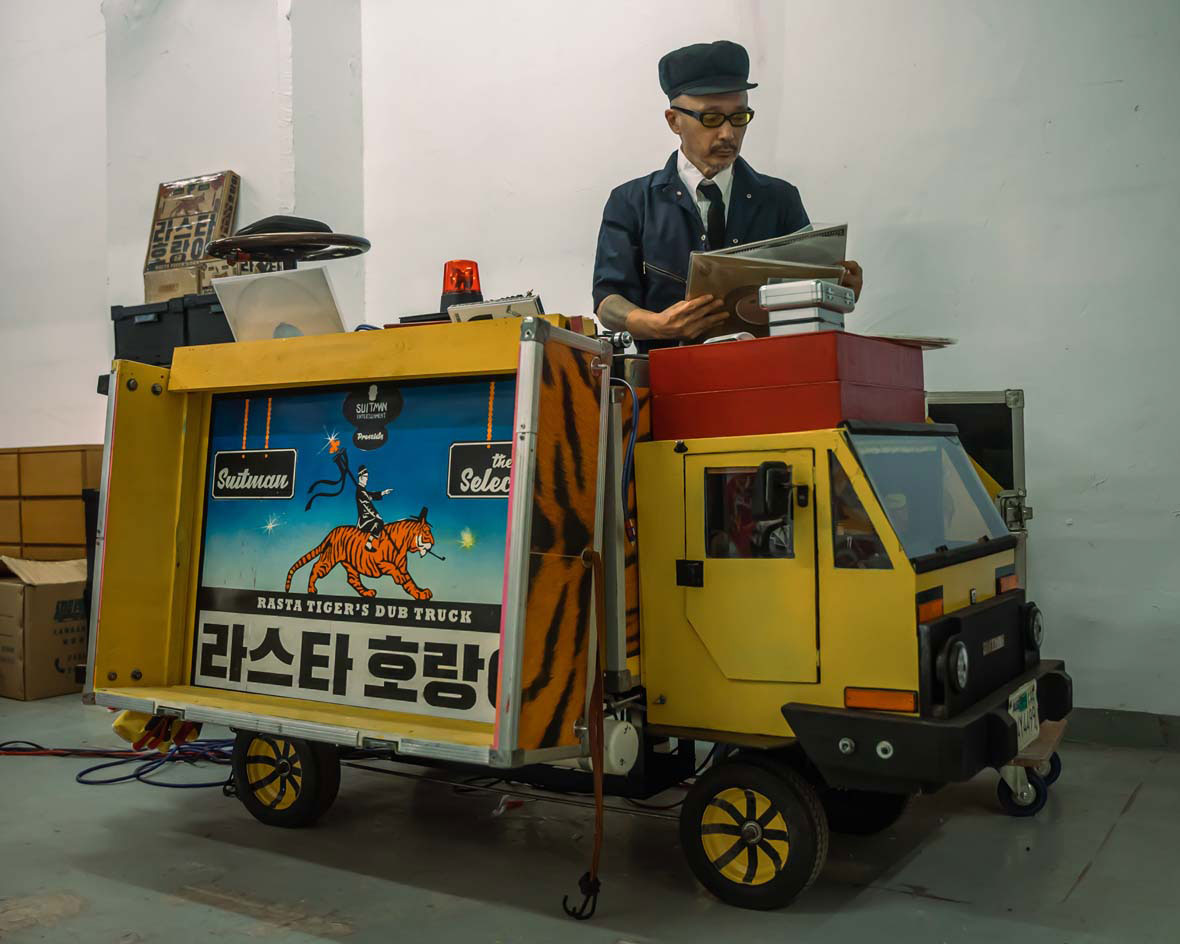 Dressed in a black-and-white suit, a traditional Korean gat hat, and slim glasses with yellow lenses, Young Kim pulls up to a small triangle patch of concrete in Brooklyn, the Williamsburg Bridge lighting up in the night sky behind him. He parks his street vendor push cart, which is nestled into the van of a miniature box truck and features a tiger in a gat smoking a gombangdae pipe and blocky hangul letters painted on it. He flips open the top, revealing turntables and a mixer. Next he pulls out a collection of red speaker cabinets from inside the cart and assembles them into a mobile sound system alongside the truck, over which he plays a selection of roots reggae and vintage East Asian records. 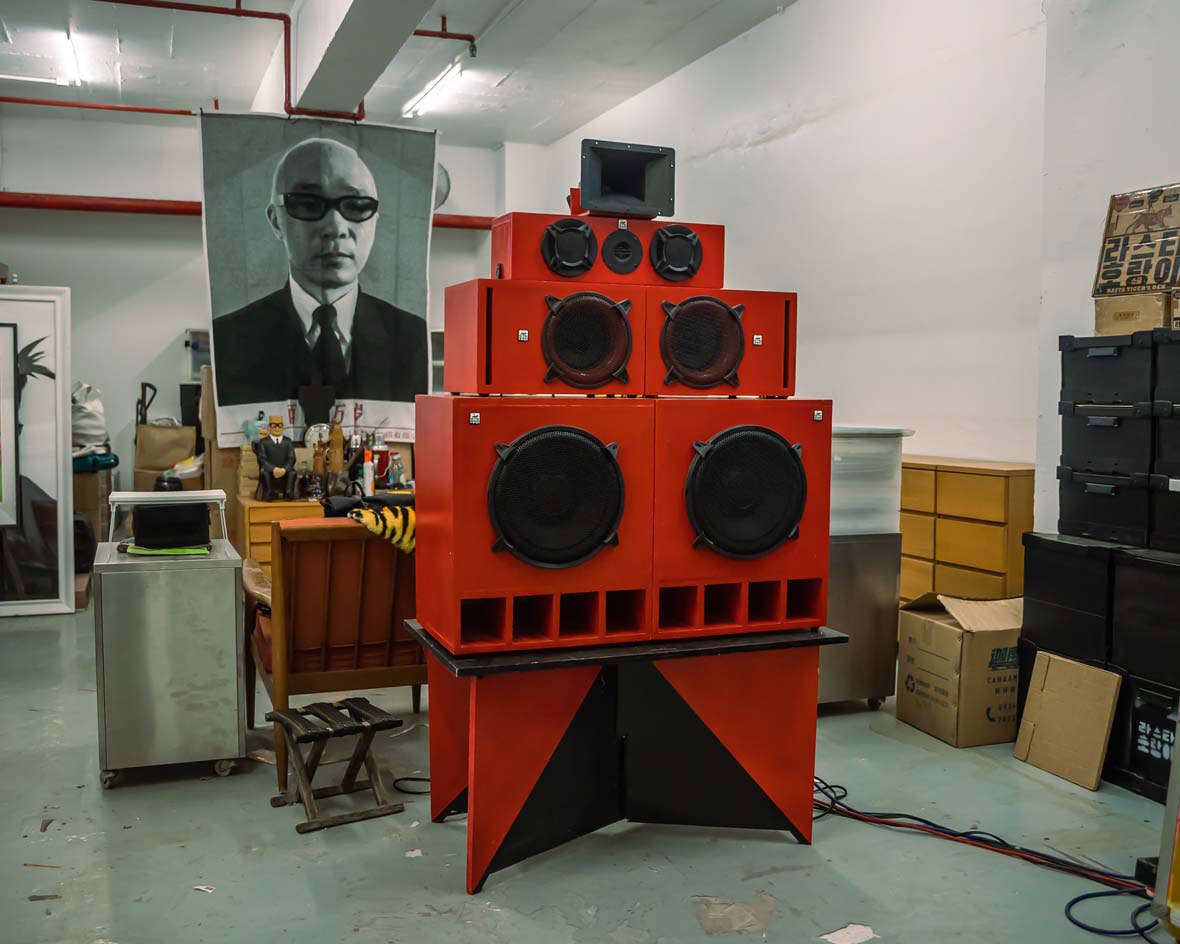 The Rasta Tiger Dub Truck, as it’s named, was hand-built by Kim himself, who’s more widely known as his artistic alter ego, Suitman. He lives in Hong Kong and collected the parts from around the Sham Shui Po neighborhood, assembling it at his long-time studio in the city’s northern New Territories. “It’s tight in Hong Kong so I had to build the whole thing on my roof deck, bringing out all the tools and everything each day,” he laughs. He painted all the details with a brush and stencils and installed the faux tiger fur that lines the inside himself. Since he’s a novice about electronics, a car radio repairwoman from the neighborhood called Mrs. Lee helped him with soldering and such. He says the speaker parts are quite random and that he doesn’t even know the brand of some of them. “I don’t consider this a real sound system, this is more like performance or installation art. But it puts out a decent sound.” 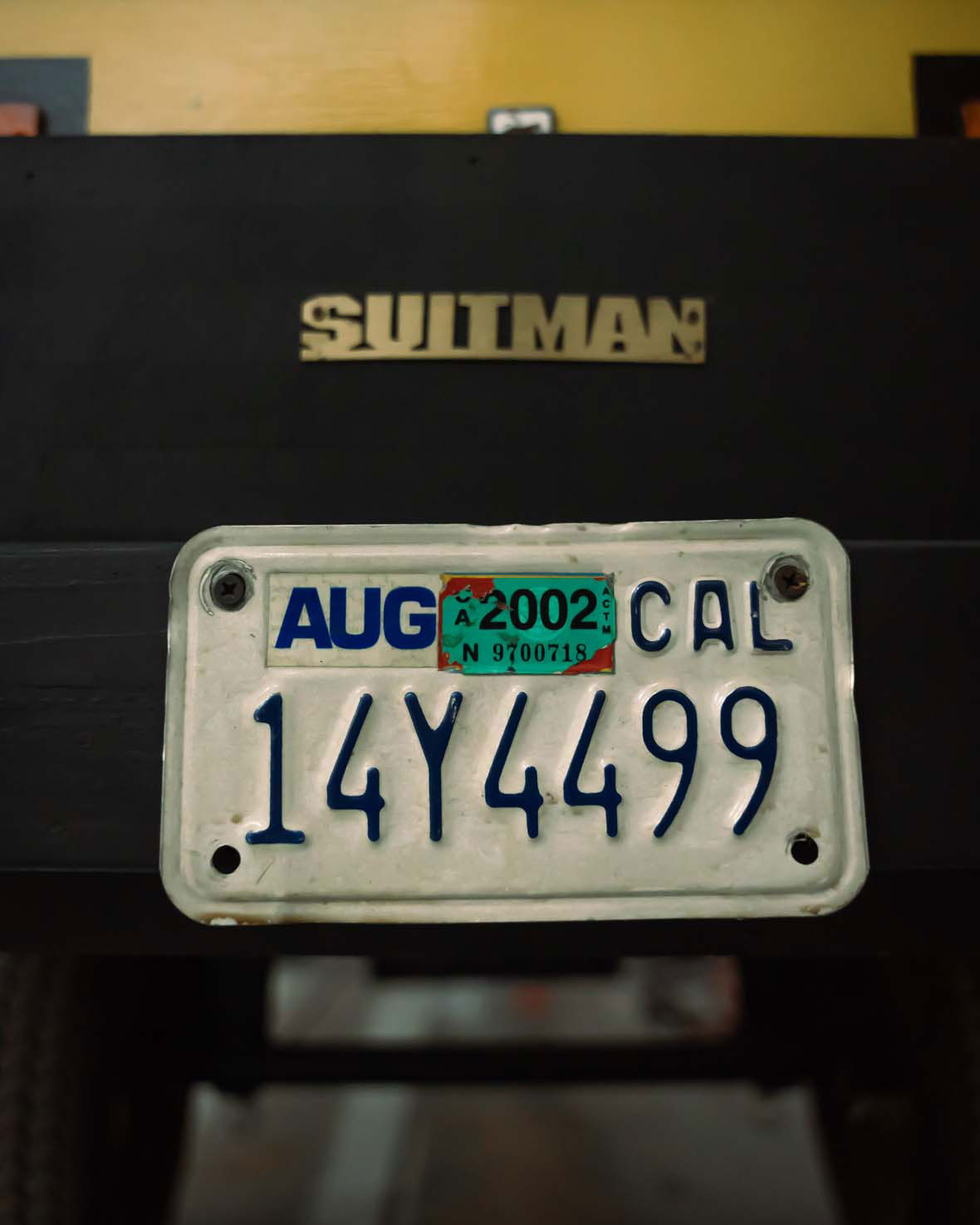 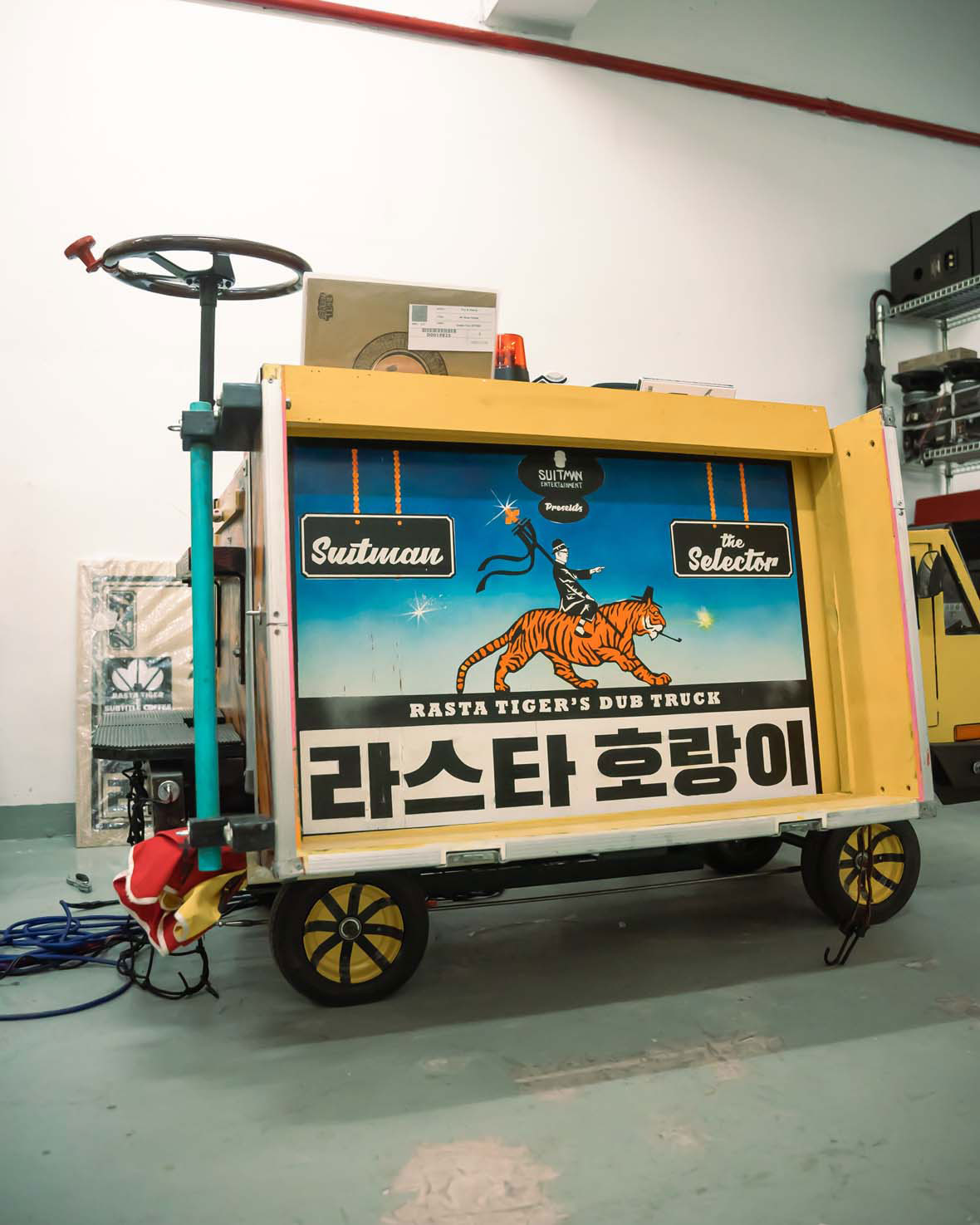 Kim, who’s 62 now, emigrated with his family from Korea to the US when he was 10, where he lived in various places along the East Coast. “My parents were running a local Korean grocery, but they have medical backgrounds. It’s a typical immigrant story,” he says. He was encouraged to pursue creative outlets as a hobby and graduated with degrees in architecture and 3D modeling. He was creative director for alternative music magazine Ear in New York in the 80s and early 90s before moving to Japan in 1992 to work for an ad firm, which was when he first moved to Asia.

While being Asian in the US made Kim feel like an outsider, his personality didn’t fit in Asia even though his face did. Because of that experience, he created the Suitman identity as a way to find confidence in himself. In 2003 he moved to Hong Kong, which he called “eye candy,” but wouldn’t relocate there permanently until 2007 when he opened his own studio with a partner called Suitman Entertainment. 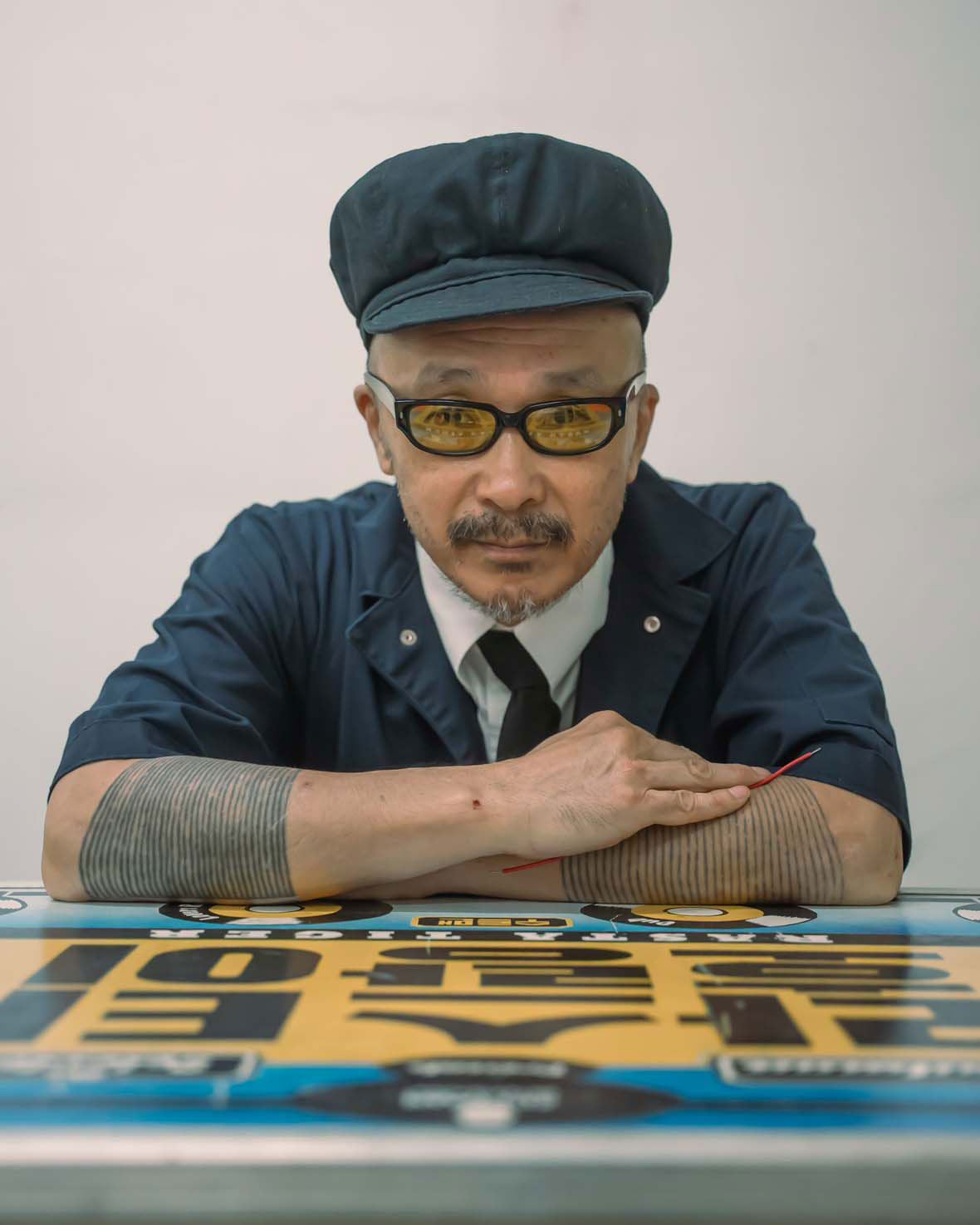 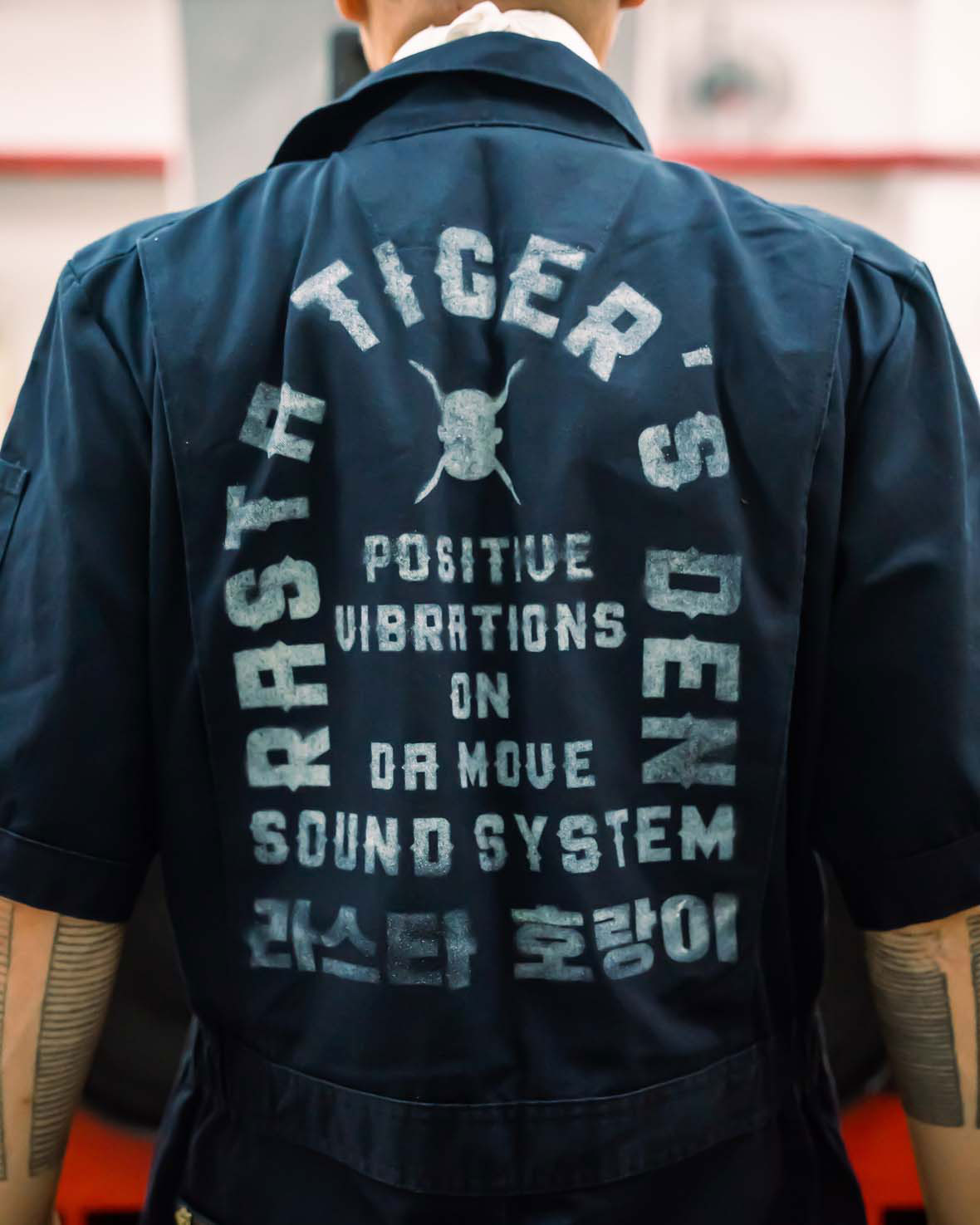 He wanted to explore Hong Kong so he had the idea of DJing outside in different parts of the city. “There used to be this old Italian man back in New York who would set up a folding table with a plate of pasta and a bottle of wine every weekend and play his boombox,” Kim says of the man who inspired him. So he lugged two small, portable turntables, a box of records, a speaker, and a car battery around town, sharing the music he loved with strangers. He says people would gather around to listen and drink wine. “I had a lot of really good, supportive experiences.” Although he hasn’t played in public in Hong Kong since 2019 because he doesn’t feel safe anymore, he’s now played all over the world. 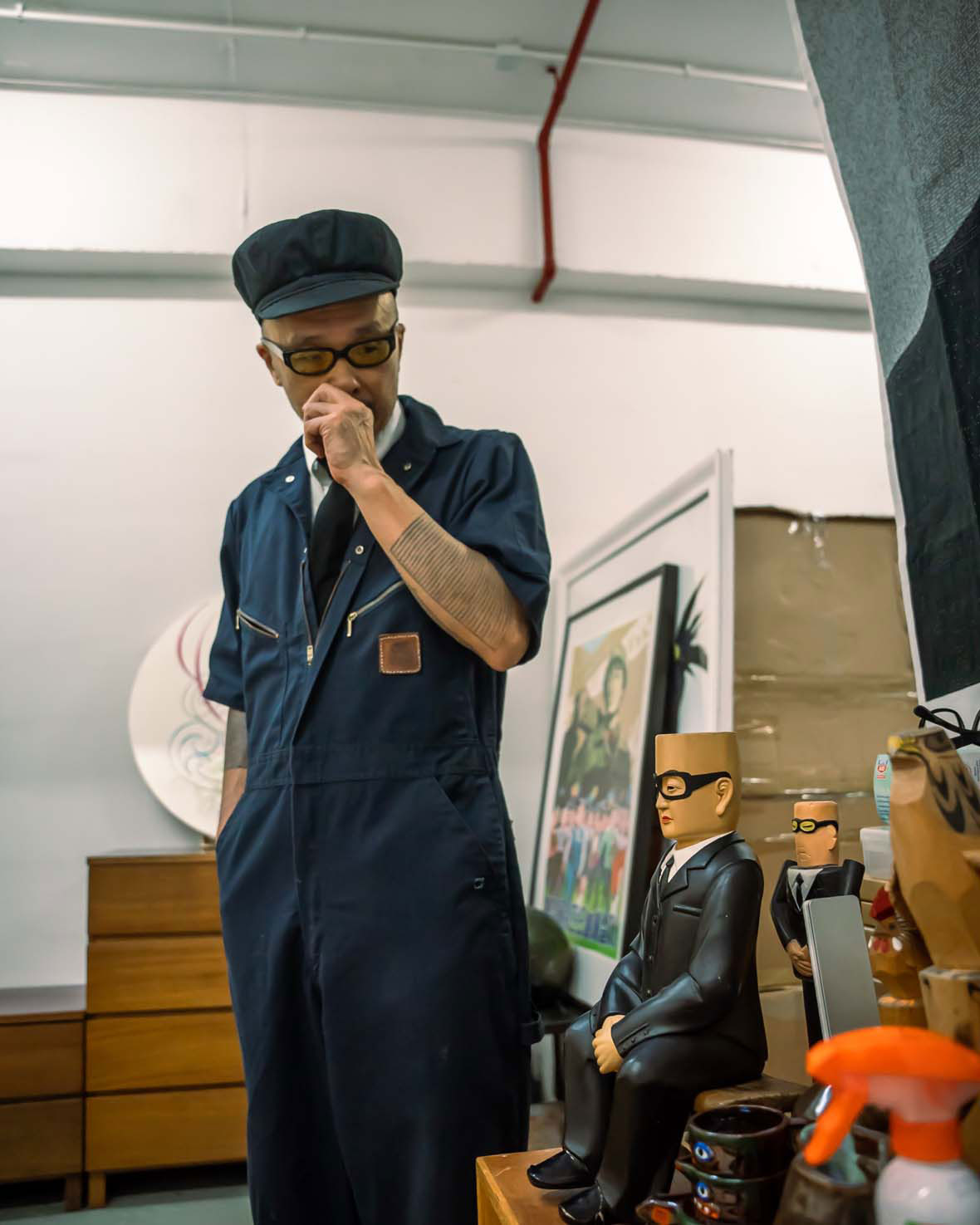 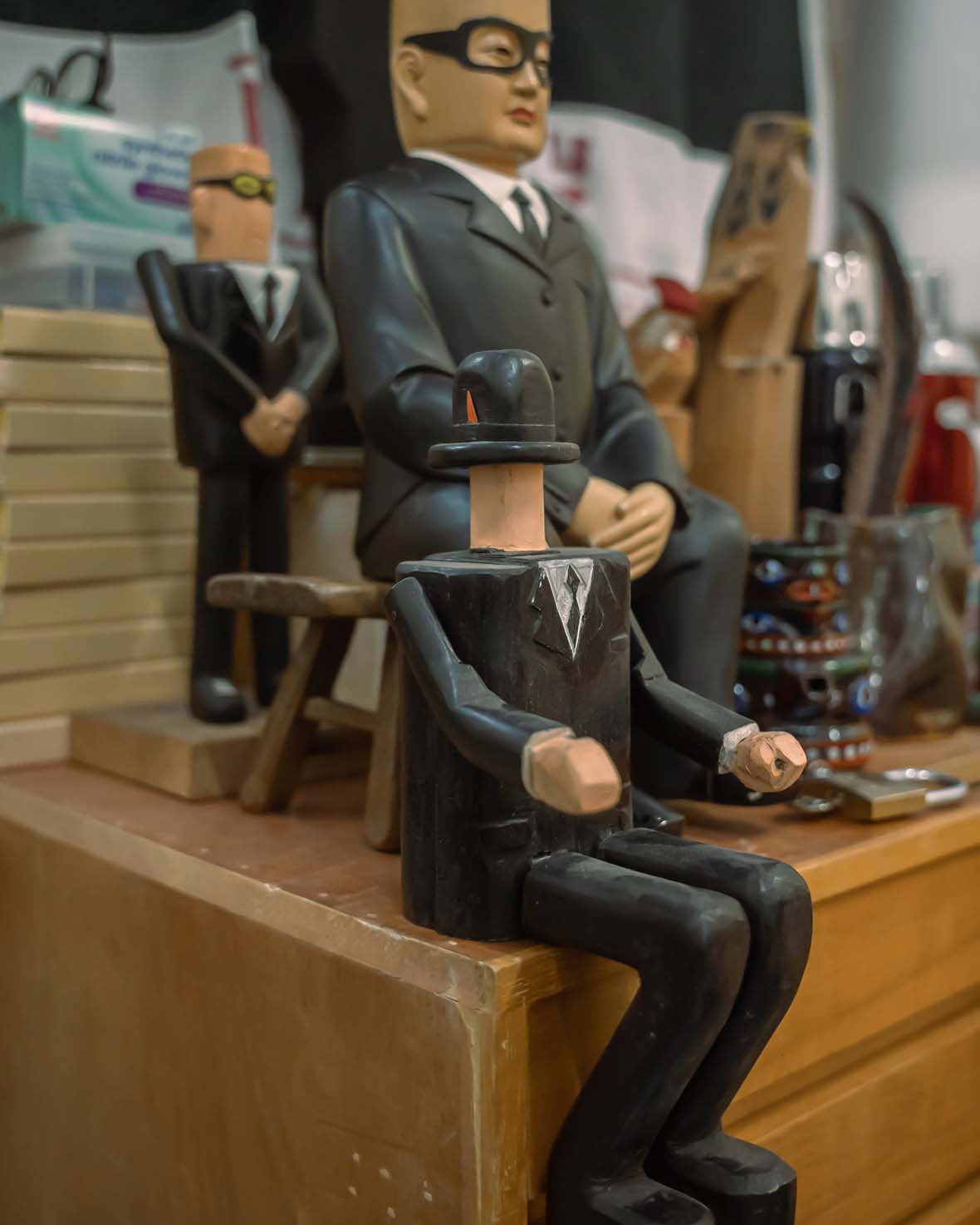 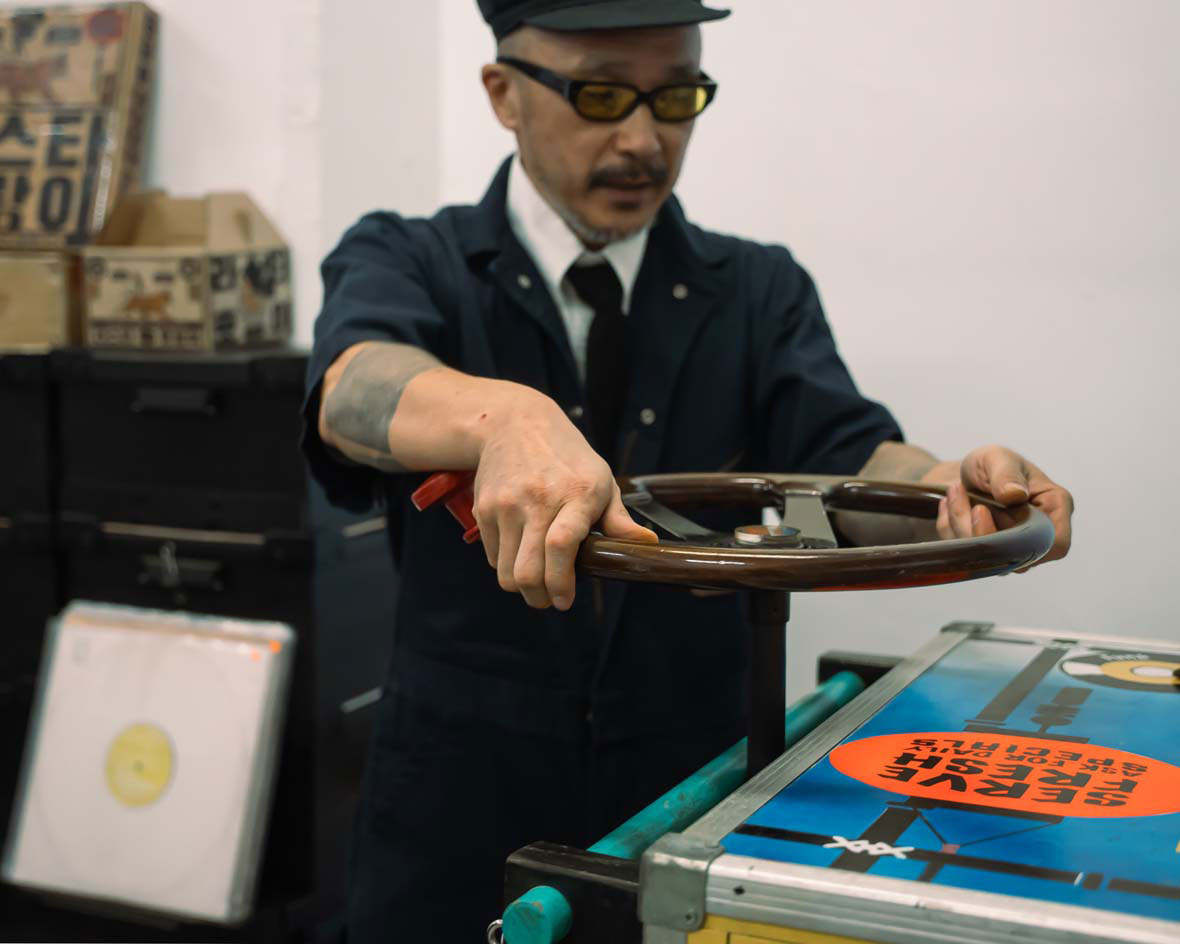 In 2009, Kim took the idea up a notch, incorporating his design skills with his love of music to create his first cart. The cart was inspired by the opening scene of the Jamaican movie The Harder They Come from 1972, where a street vendor with a push cart robs the hero. Kim’s original version was black, red and yellow with four speakers built inside it below the decks and a big umbrella. He modified it three years later, adding the box truck and repainting it more colorfully. “With the newest one I learned from my mistakes, like not putting the speakers right below the turntables, which rattled them.” In 2018 he also modified a new set of suitcases for an updated version of his original portable players for more mobile nights out. 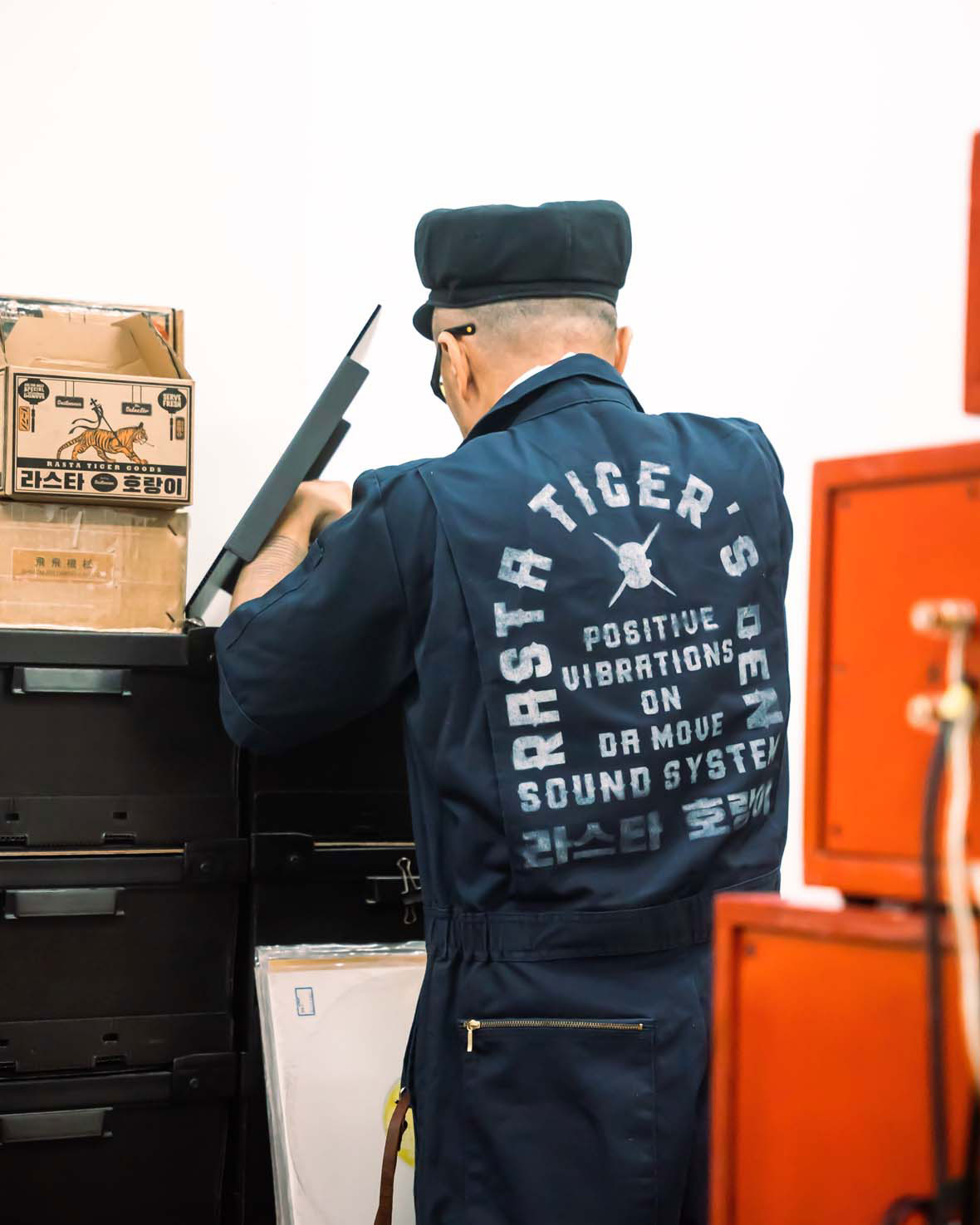 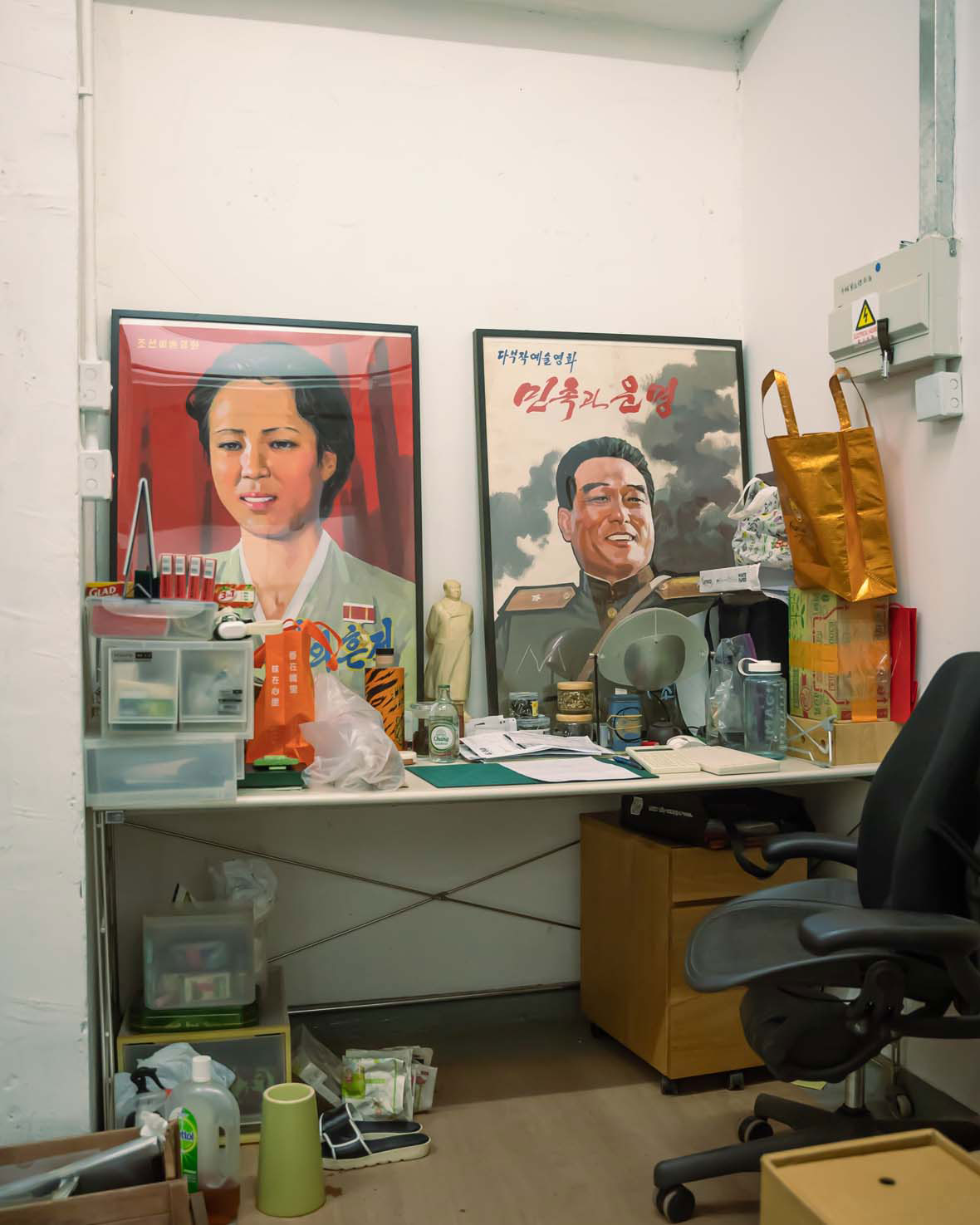 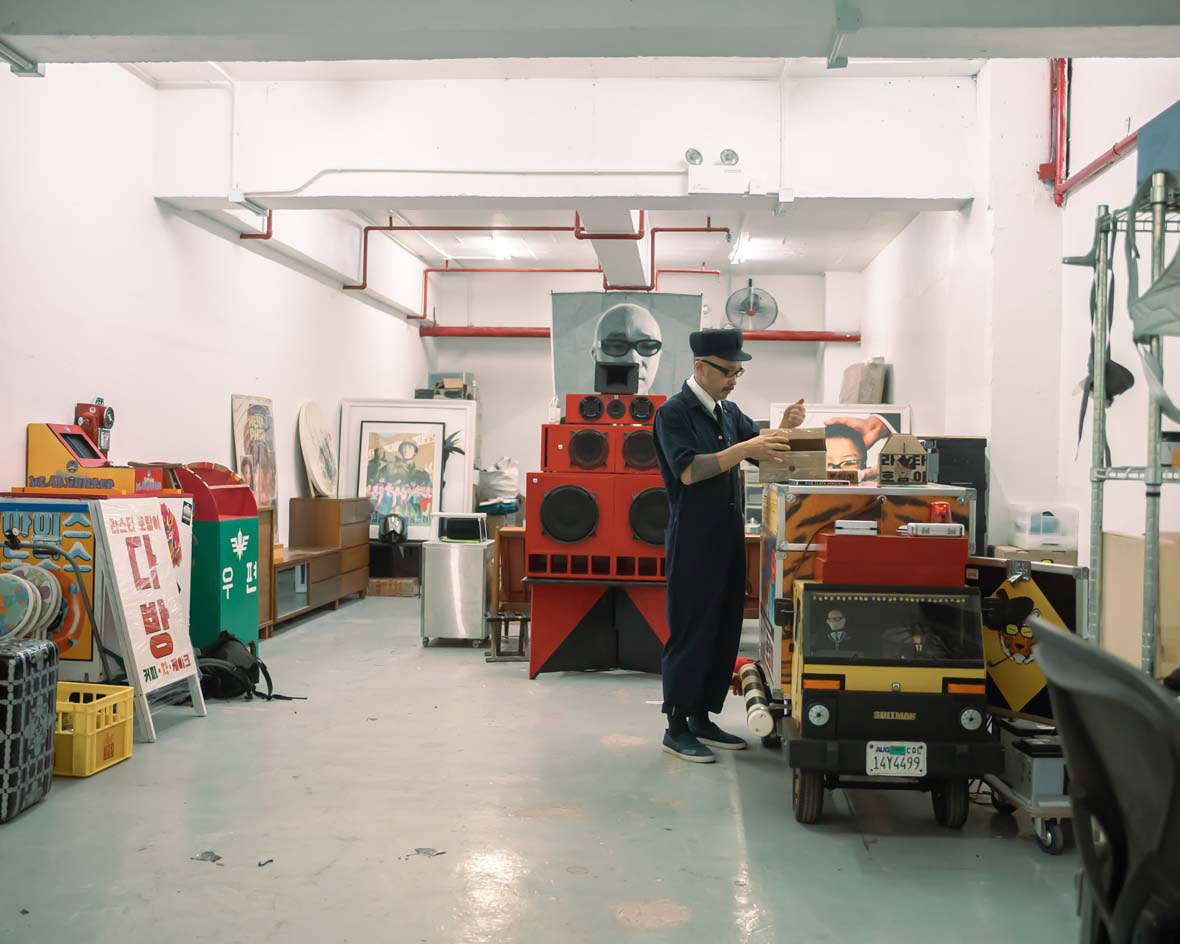 Kim most recently launched a global tour that started in May 2021 at Soho House in Hong Kong, where he debuted his Rasta Tiger Dub Truck at a pop-up modeled after a Korean vintage music market. The shop featured limited-edition collaborations with Sticky Monster Lab, Balansa Busan, and Kompakt Record Bar in Seoul. He also designed multiple flyers for the different stops in the tour featuring the Rasta Tiger lurking about different environments. And he used the opportunity to release his first 7-inch record called “A Man With Yellow Glasses,” which he only pressed 50 copies of. It had four versions featuring vocals by Deung Yong, with production by Hong Kong music stalwart Arthur Yeti and others. The tour’s finale happened on that Brooklyn street side under the bridge, ending his latest journey on the East Coast where he first started.