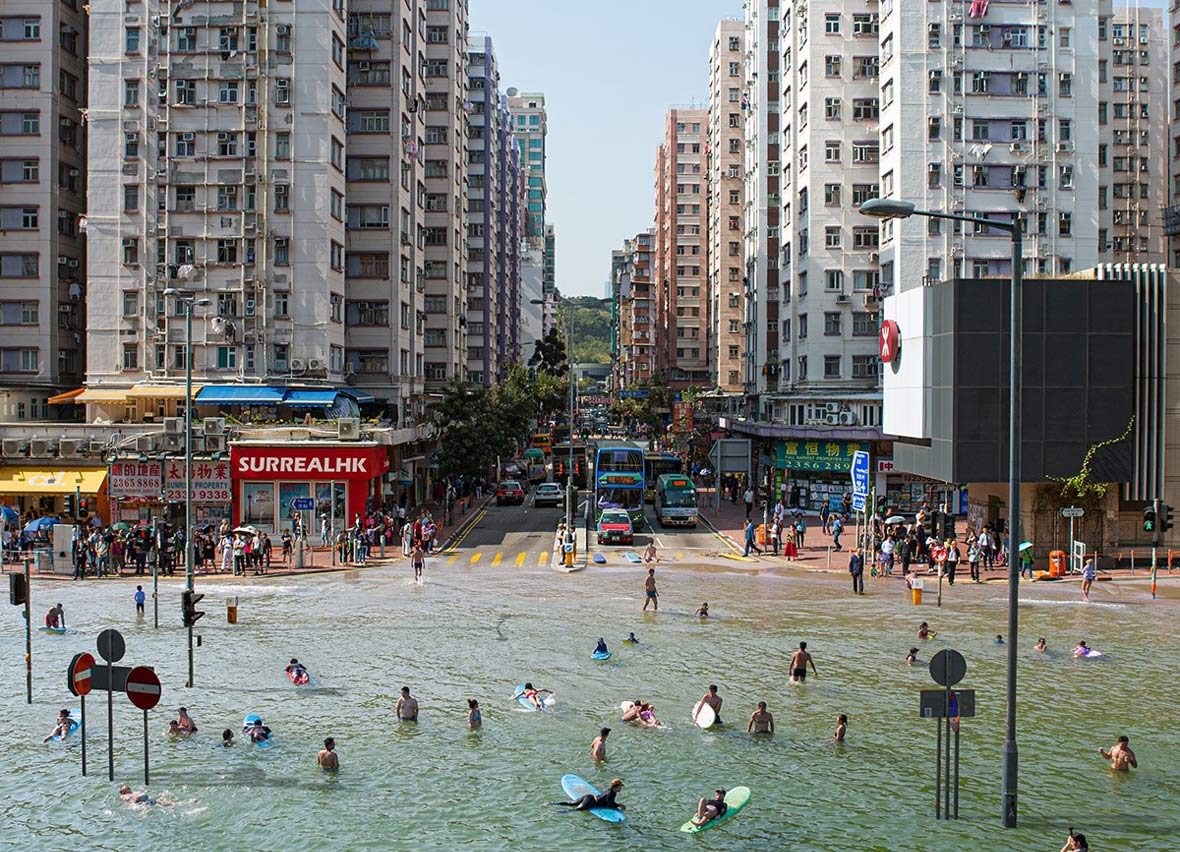 At the crack of dawn, before the morning mist has even lifted off of Victoria Harbor, the streets of Hong Kong are already abuzz with activity. Taxis and buses fill up the roads, steam spews from hole-in-the-wall breakfast joints, while swarms of white-collar workers and uniformed students crowd sidewalks and MTR stations. Hong Kong is a city on overdrive and undoubtedly one of the most frenetic places in the world. Within this concrete expanse, harsh realities exist: unemployment, bankruptcy, and other insurmountable disappointments are a part of everyday life. The glitzy skyscrapers that loom overhead seem to gaze down at the city’s inhabitants with cold indifference.

But in the works of Hong Kong artist Tommy Fung, the city’s somber atmosphere is given a facelift: block-shaped fragments of the city’s high rises fall into place like a game of Tetris, Autobots and giant pandas rove the streets, and DeLoreans hover above curbside parking spaces. This project, aptly titled SurrealHK, is comprised of Photoshop composites assembled from his original photography. With these images, Fung hopes to capture the sheer lunacy of life in Hong Kong, dialing it up a notch. “It’s nothing special,” he shrugs. “I’m just showing everyday Hong Kong.” 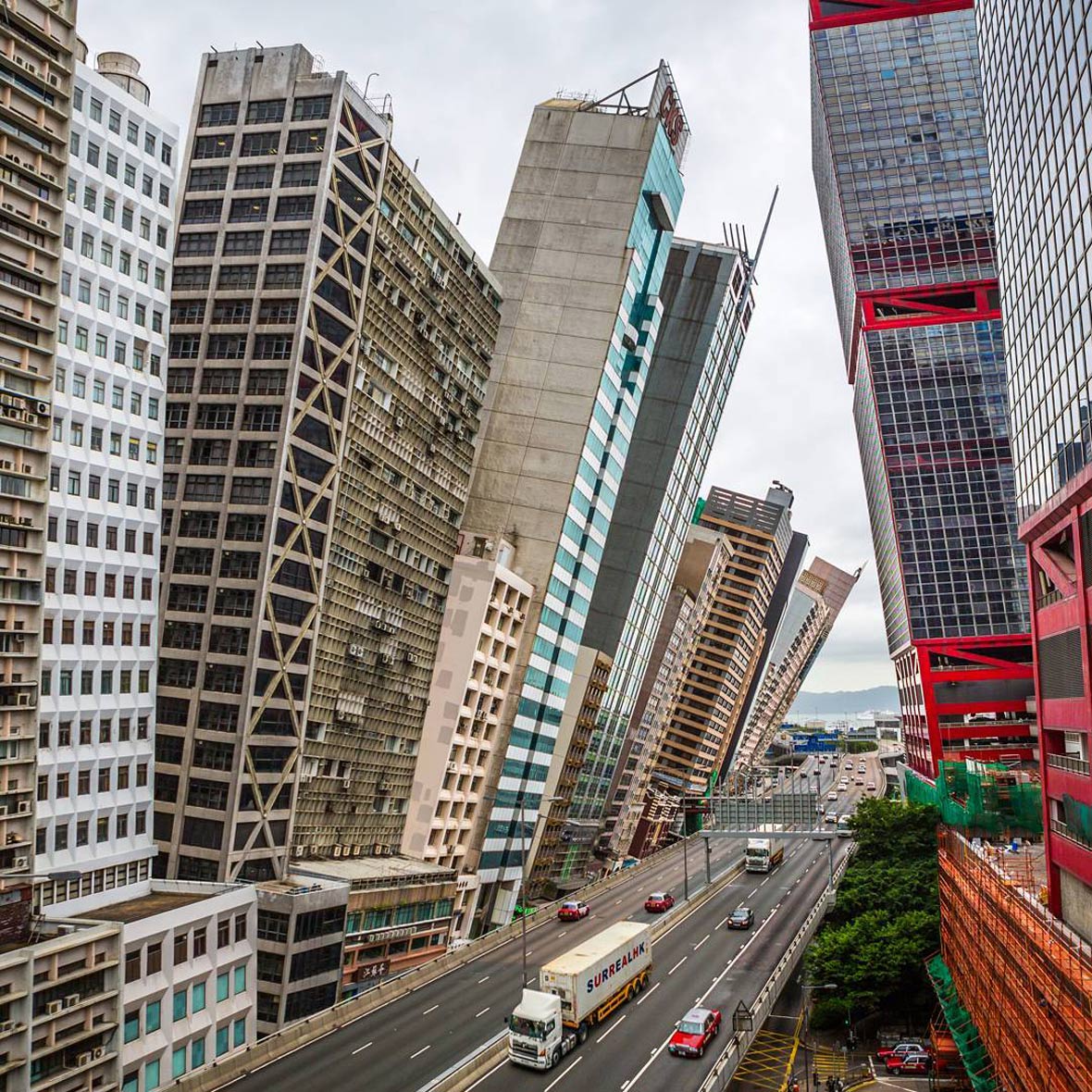 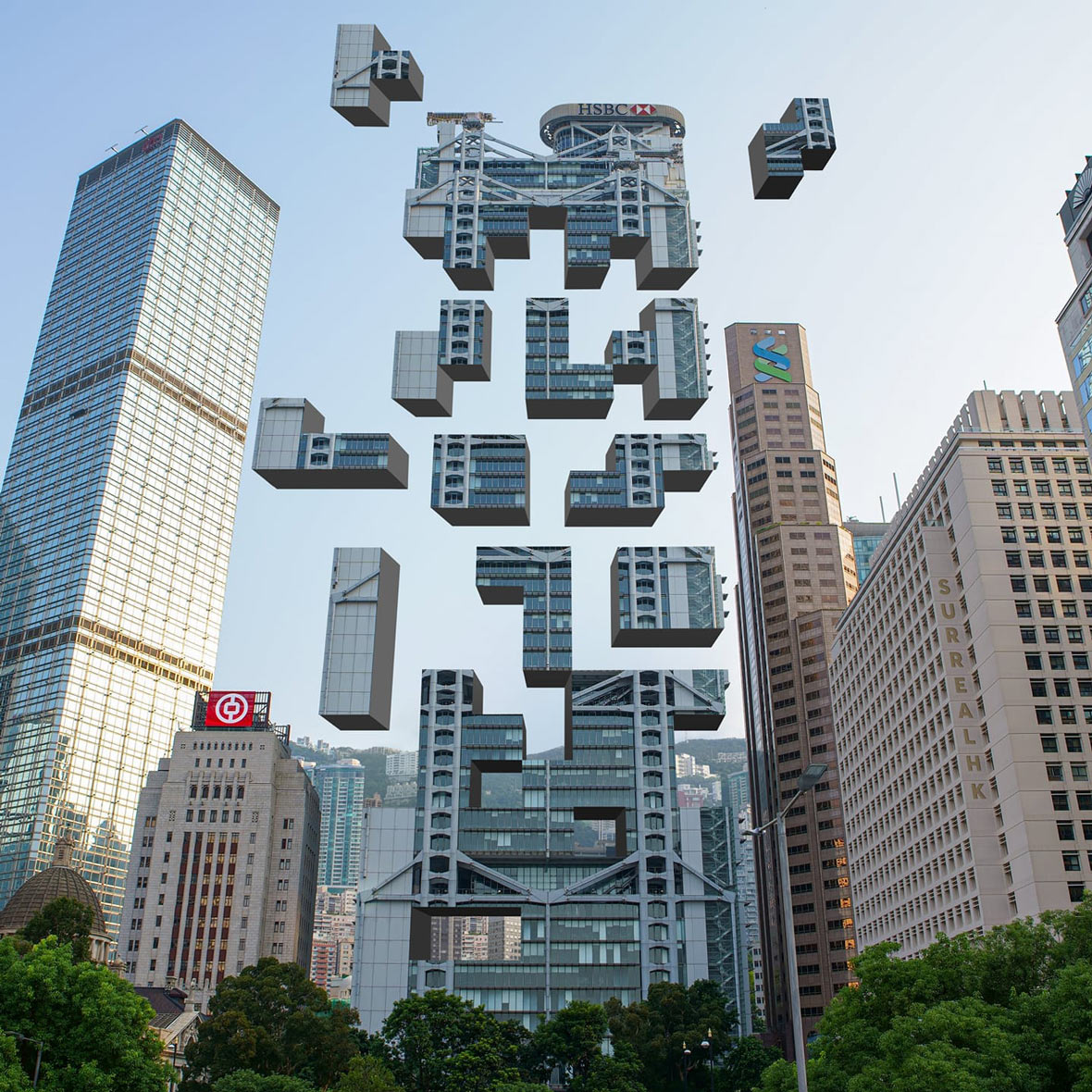 At 9 years old, Fung moved out of Hong Kong with his family, relocating to Maracaibo, the second-largest city in Venezuela. The country, a far cry from the rhythm of Hong Kong, was an ocean-side oasis with what seemed like an unending supply of sunshine. The laidback lifestyle was something Fung had to get used to at first, but he ended up fully embracing it.

In traditional Hong Kong households, parents often expect their children to pursue certain careers in high-paying industries, such as law or finance. But Fung’s parents were far more open-minded. Studying at the University of Venezuela, Fung was free to pursue his personal interests, and he took full advantage, immersing himself in creative disciplines such as graphic design, photography, and more. He quickly took a liking to photography, learning his way around a camera and Photoshop. After graduating, he started his own photography studio and began taking on a range of different commercial work. This was one of the happiest periods of his life.

In 2012, things took a turn. This year marked the beginning of Venezuela’s economic collapse. Inflation rose exponentially. Hunger and poverty quickly swept the nation. The government, social security programs, and the healthcare system fell into shambles, and Fung saw no light at the end of the tunnel. In January of 2016, Fung moved back to Hong Kong in search of stability. 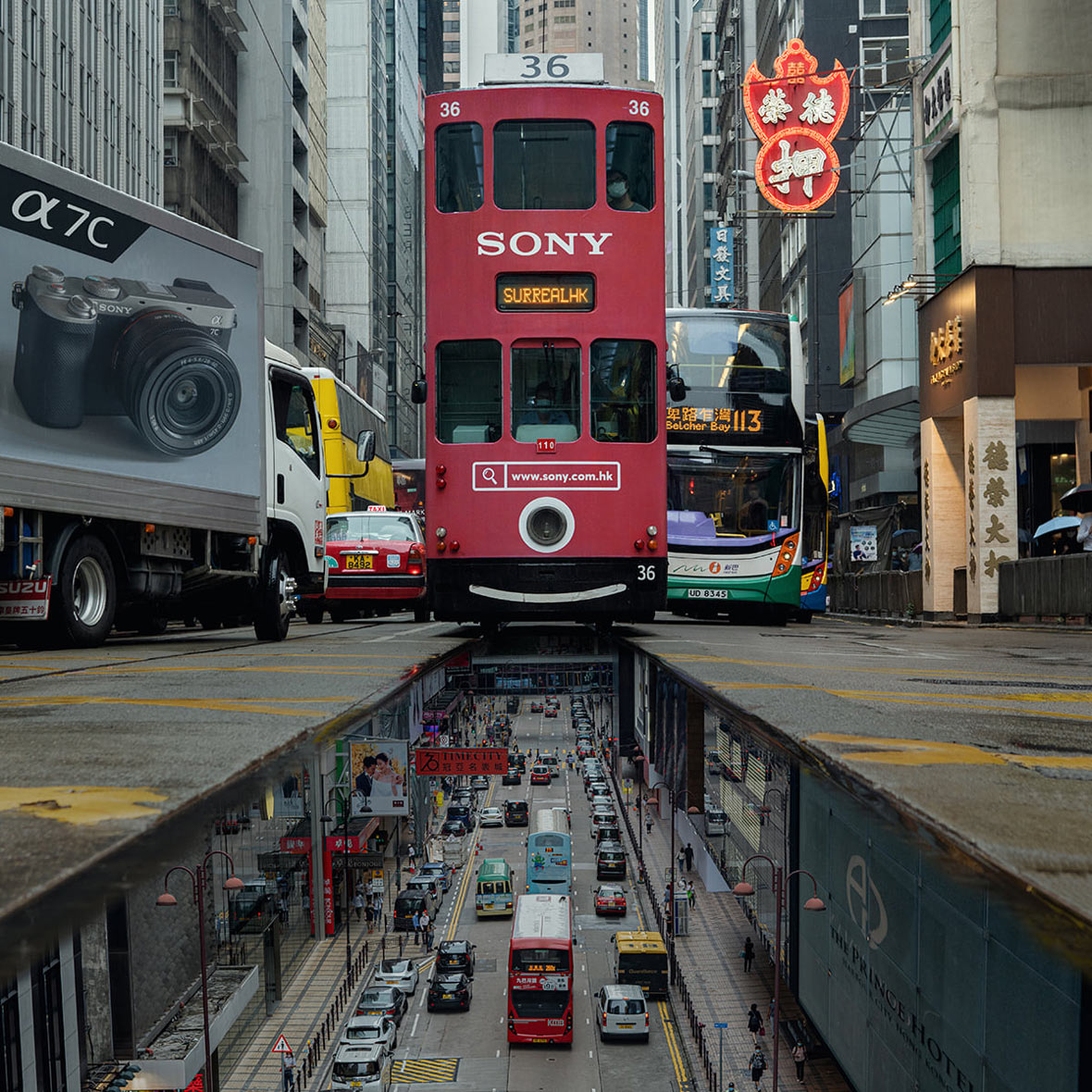 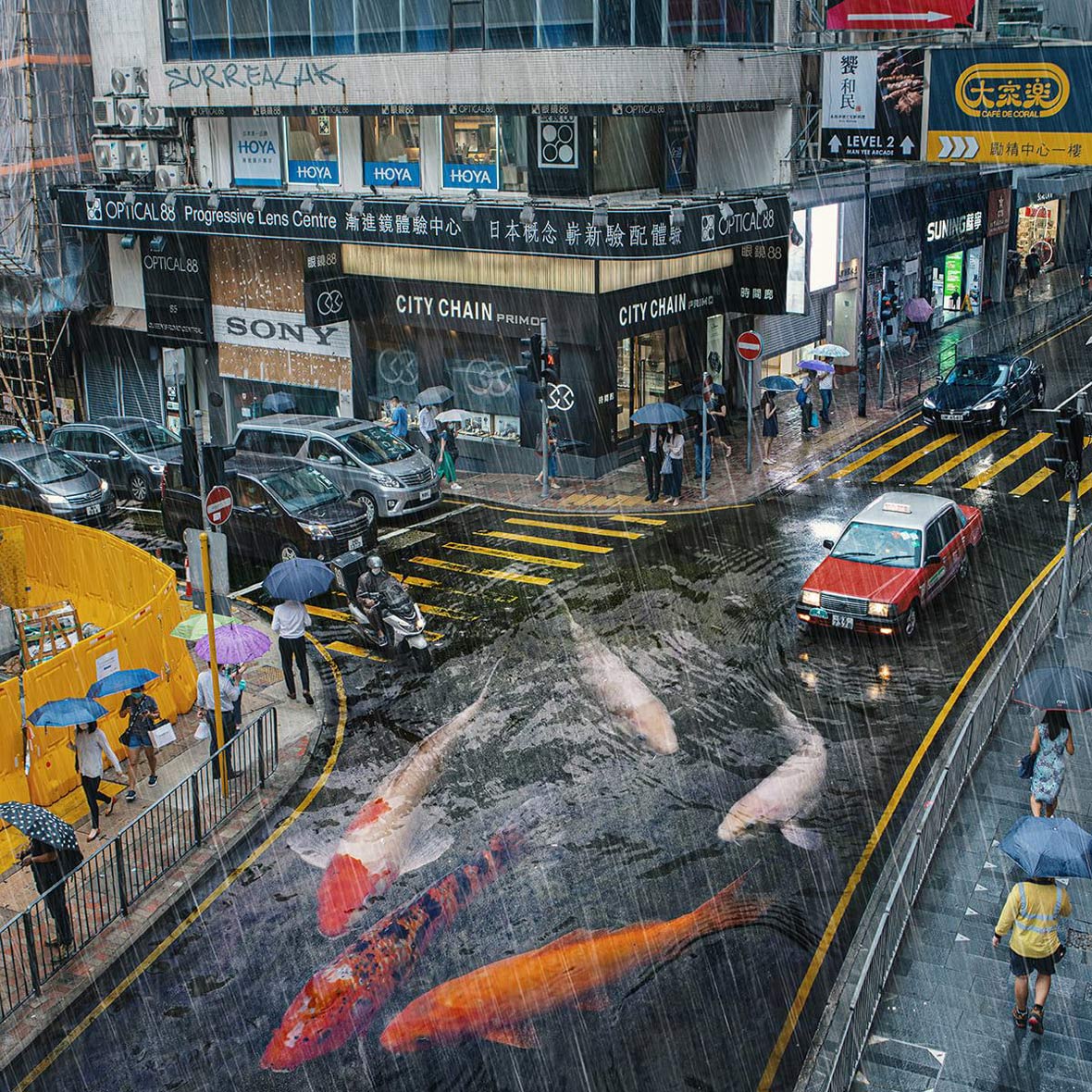 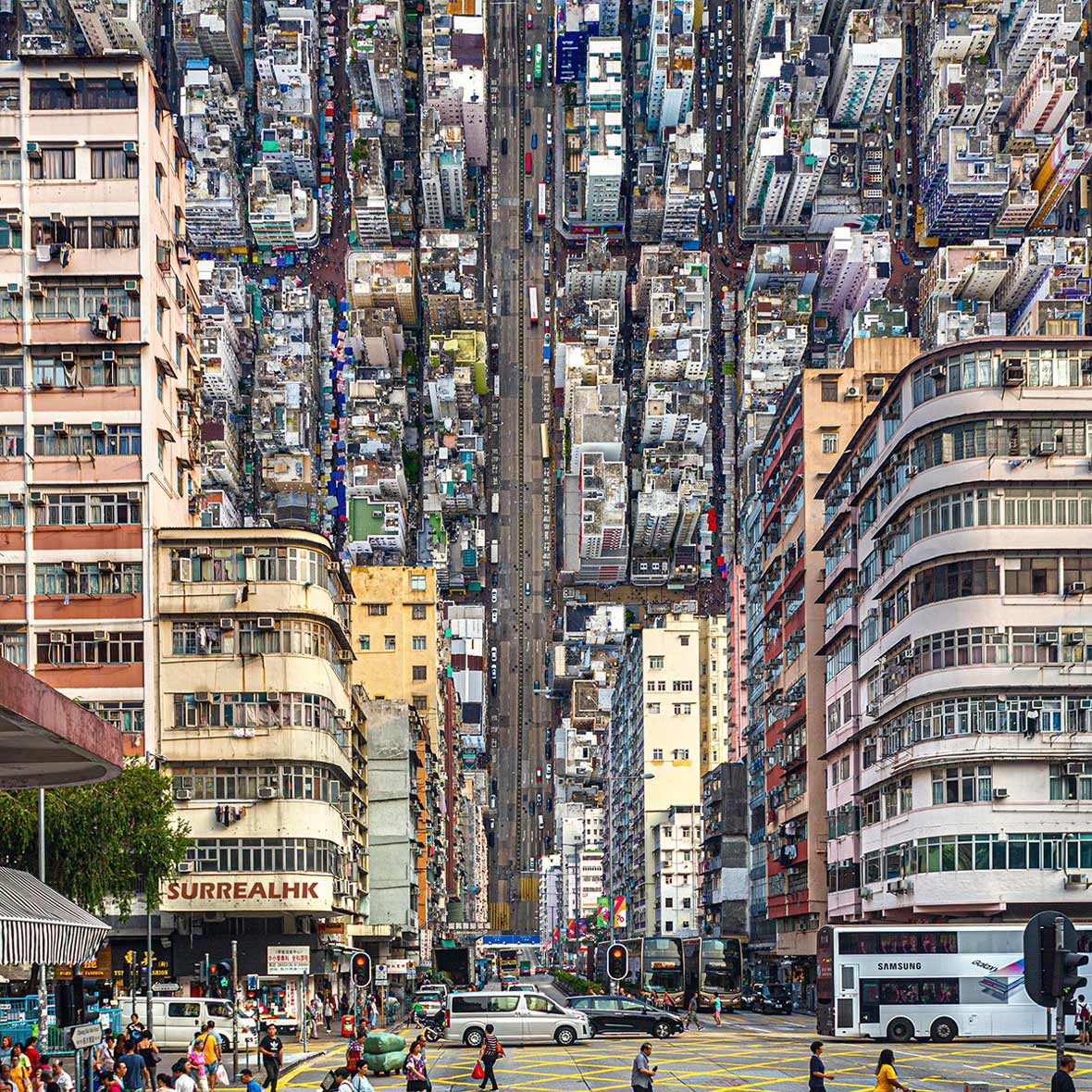 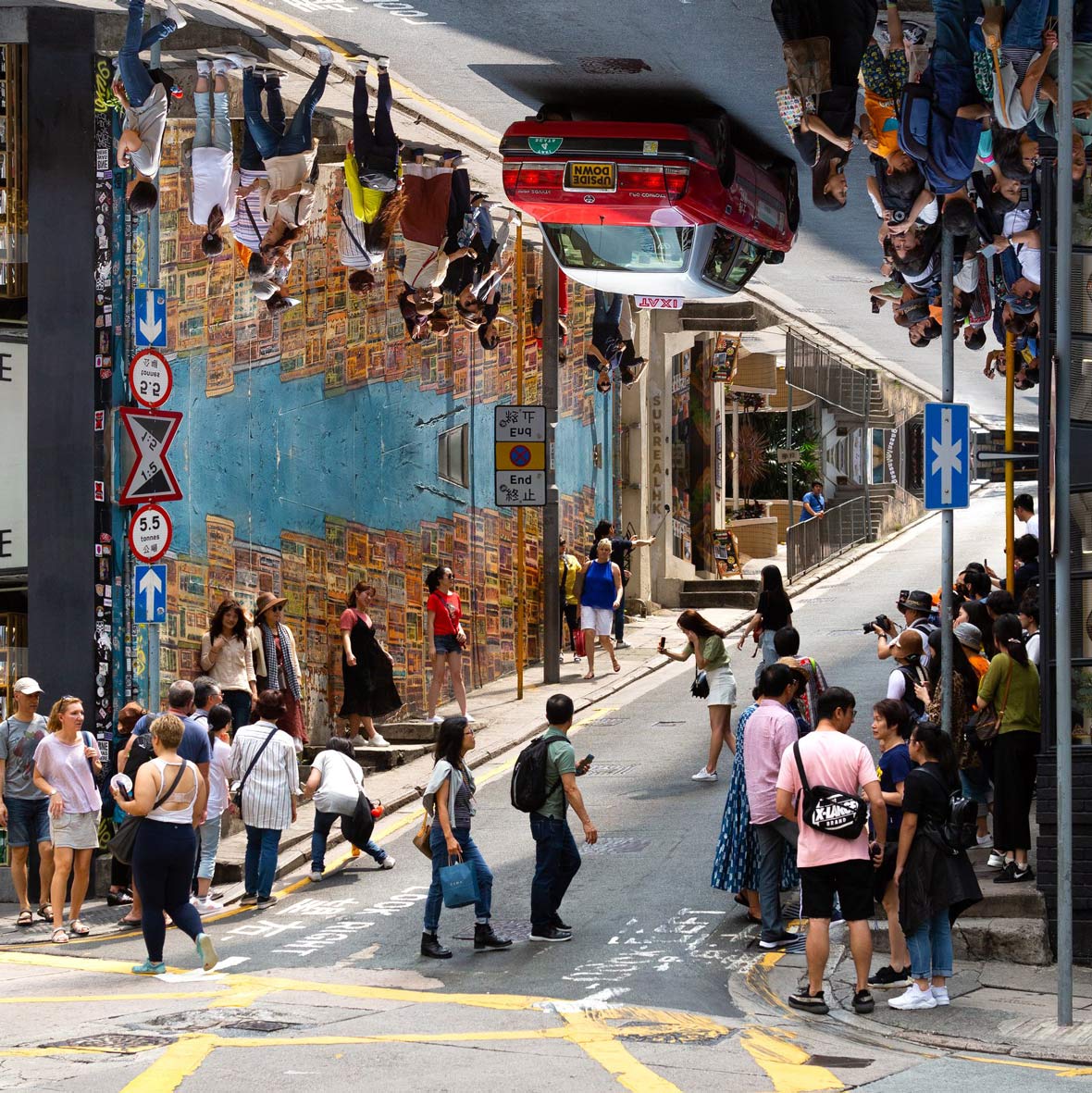 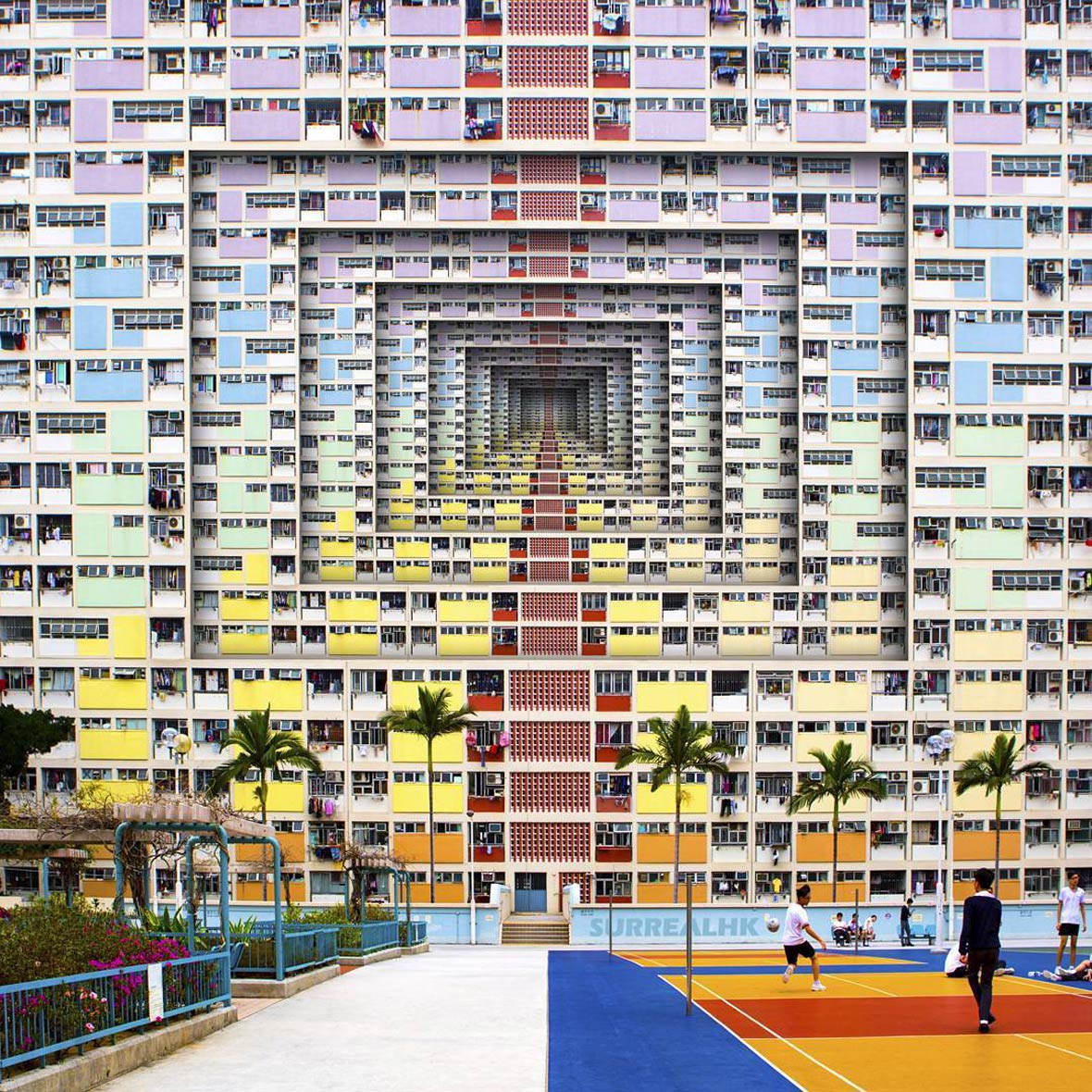 Even after moving back, Fung found little peace of mind. Hong Kong was far too different from what he was used to in Maracaibo, and he found himself at a creative dead end with his photography. He had trouble finding work that he was passionate about. The sheer density and pace of life in Hong Kong wore him down: he watched unhappy workers scurry off to their jobs day in and day out, negative news dominate the airwaves, and infeasible real estate prices suffocate hopes of homeownership for the younger generation—it was a lot to take in. He thought back to his time in Venezuela, and how happy he felt in those early days of photography. He wanted to rediscover that happiness, and maybe even spread some of it around in Hong Kong. Crafting a make-believe world with his photography became the way for him to do just that. “I just hoped to make something that could make people smile,” he says. 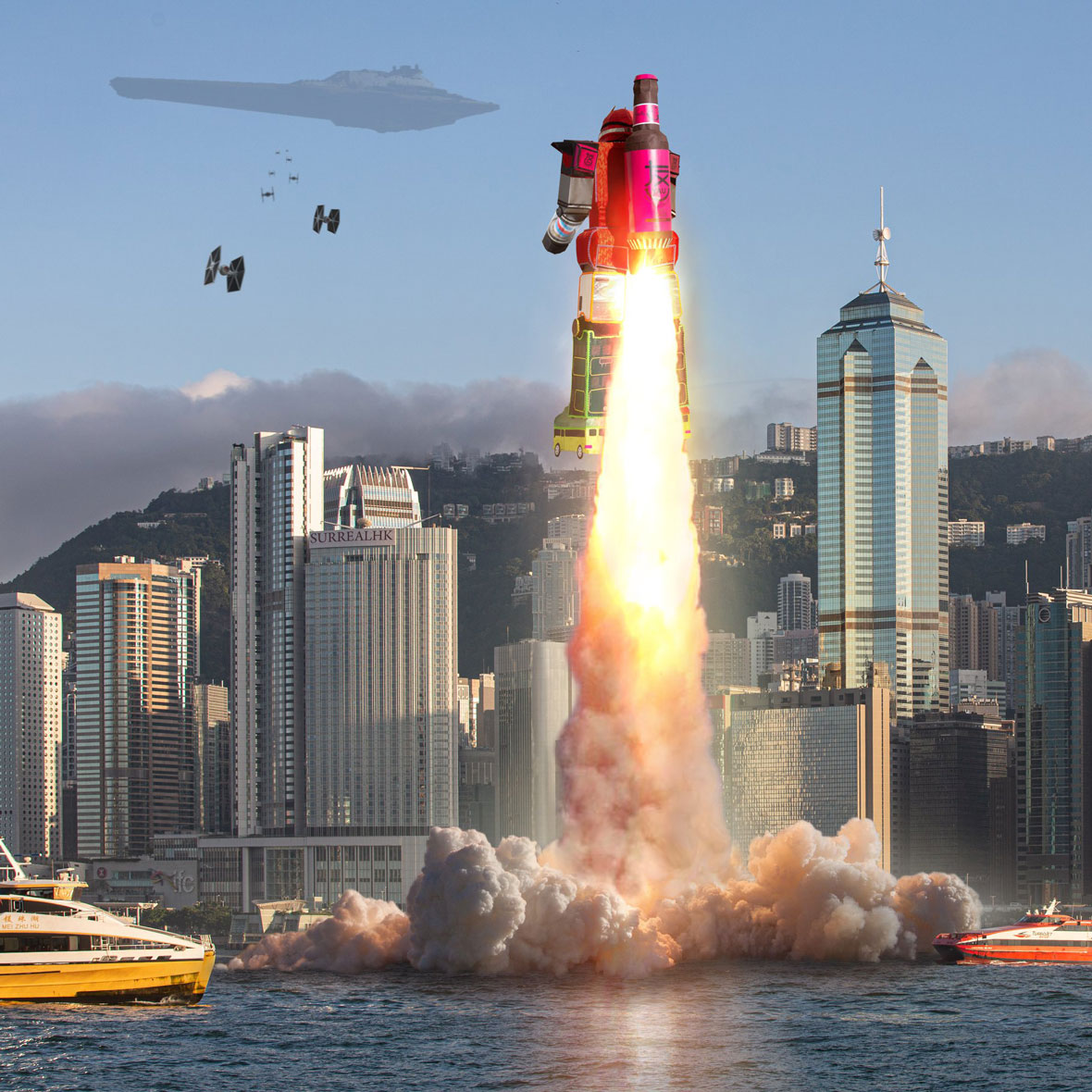 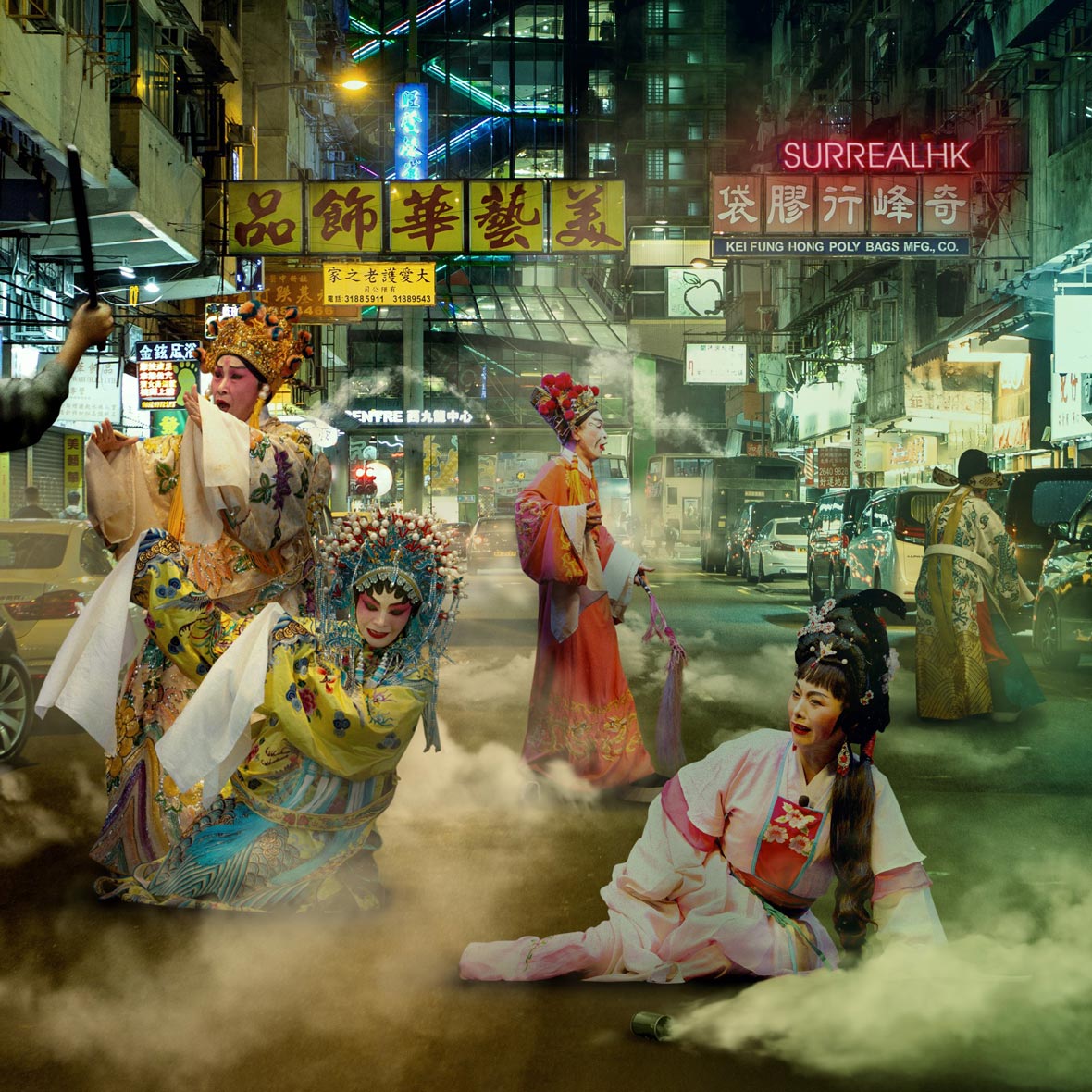 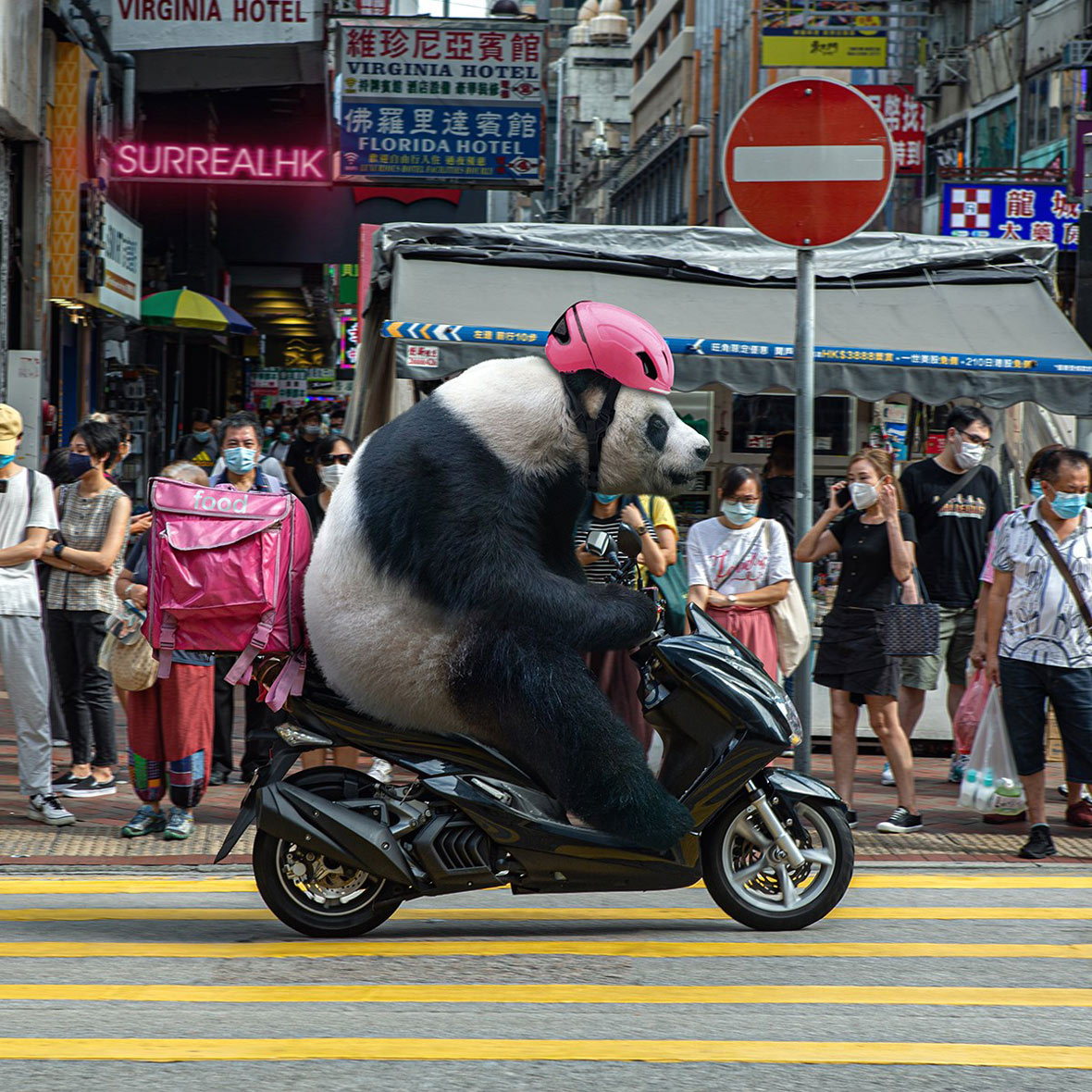 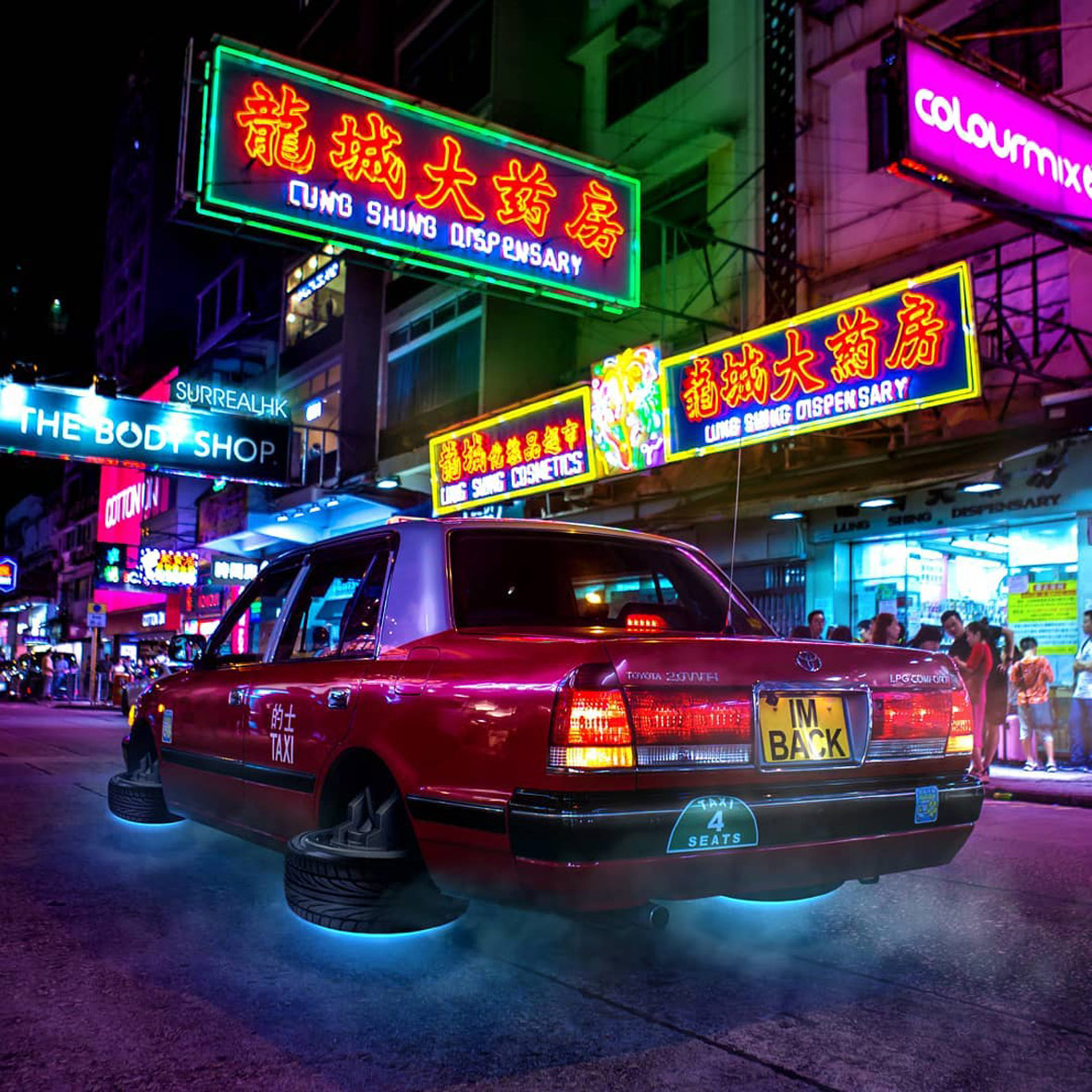 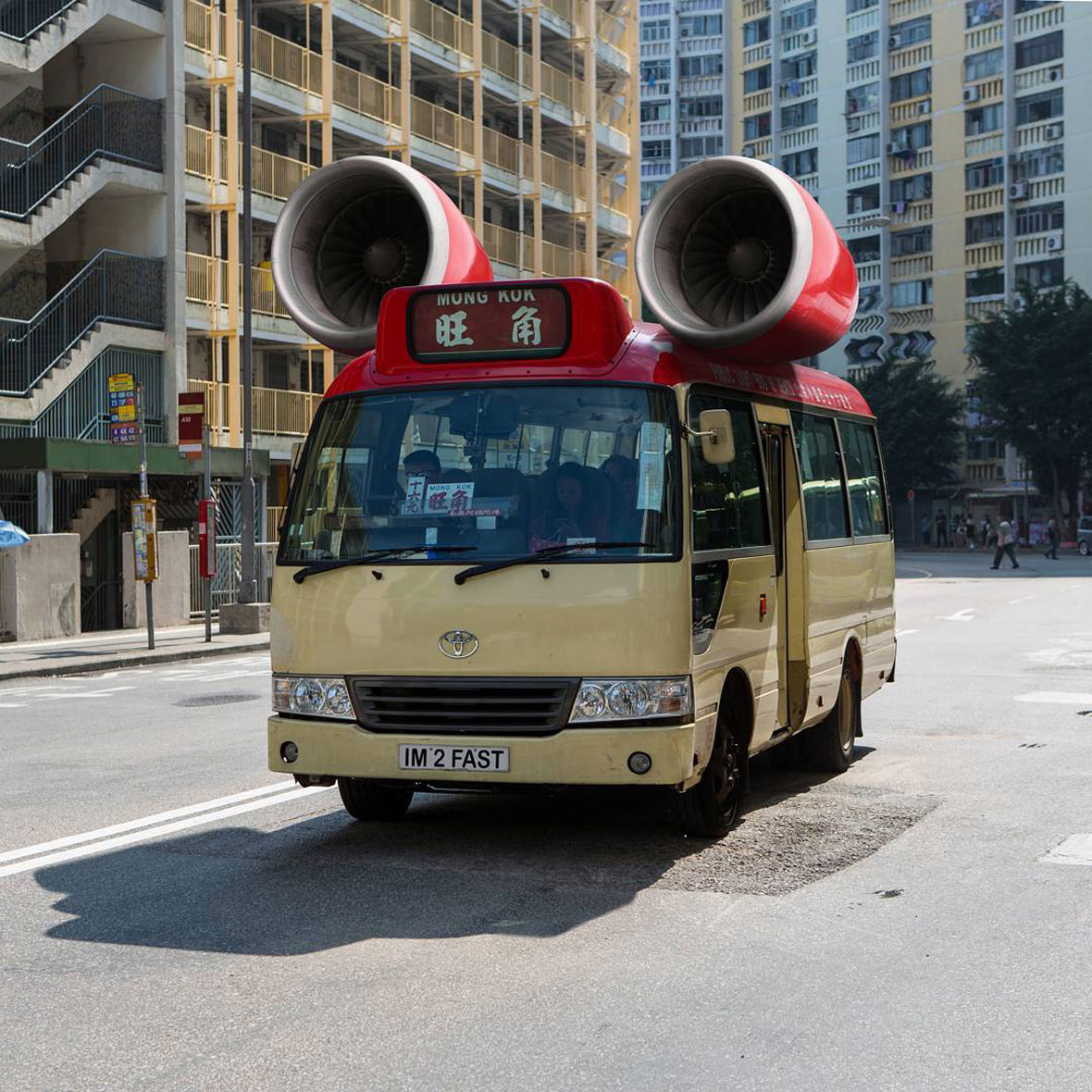 Fung began uploading works to the @SurrealHK Instagram account in 2017. In these images, outlandish happenings are the norm: surfers ride down a concrete staircase, pandas roam the neon-lit streets, and gargantuan koi fish swim beneath liquid cement. But even outside of his own imagined scenarios, he also enjoys weaving together motifs from sci-fi, fairytales, and other disparate works of fiction. Iconic characters and objects from films such as Transformer, Inception, Doctor Strange, Back to the Future, have all made cameos in the series.

As of recent, Fung has turned his focus towards current affairs. Climate change, social unrest, and other hot-button issues now serve as frequent inspiration. For example, in 2020, a lot of work was created around the pandemic. Adding a touch of humor, he invites audiences to reflect on the status quo. “I wanted to bring my sunny disposition to Hong Kong originally,” he says. “But this series has given me a deeper understanding of the city and its many issues, so it’s only natural for it to appear in my art.” 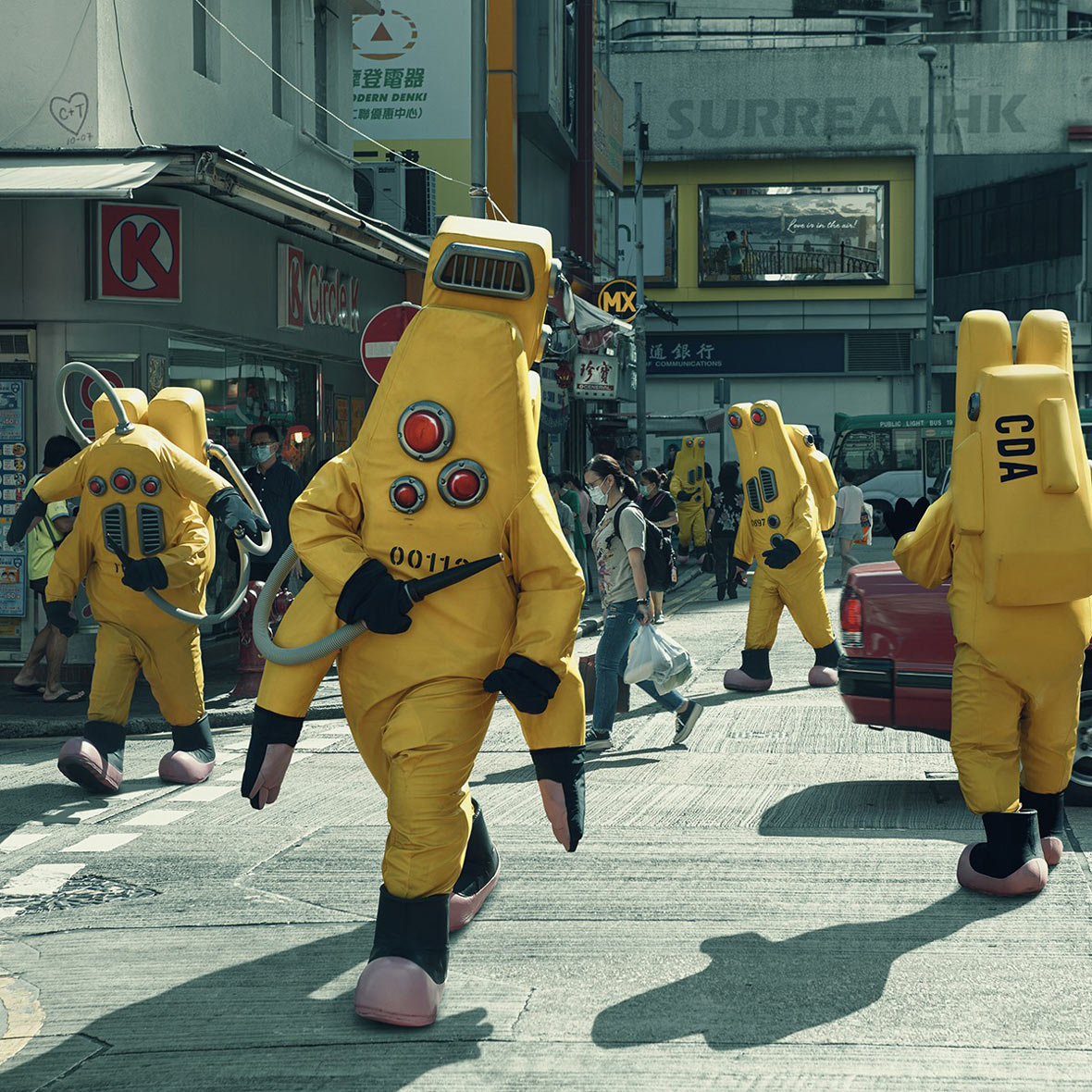 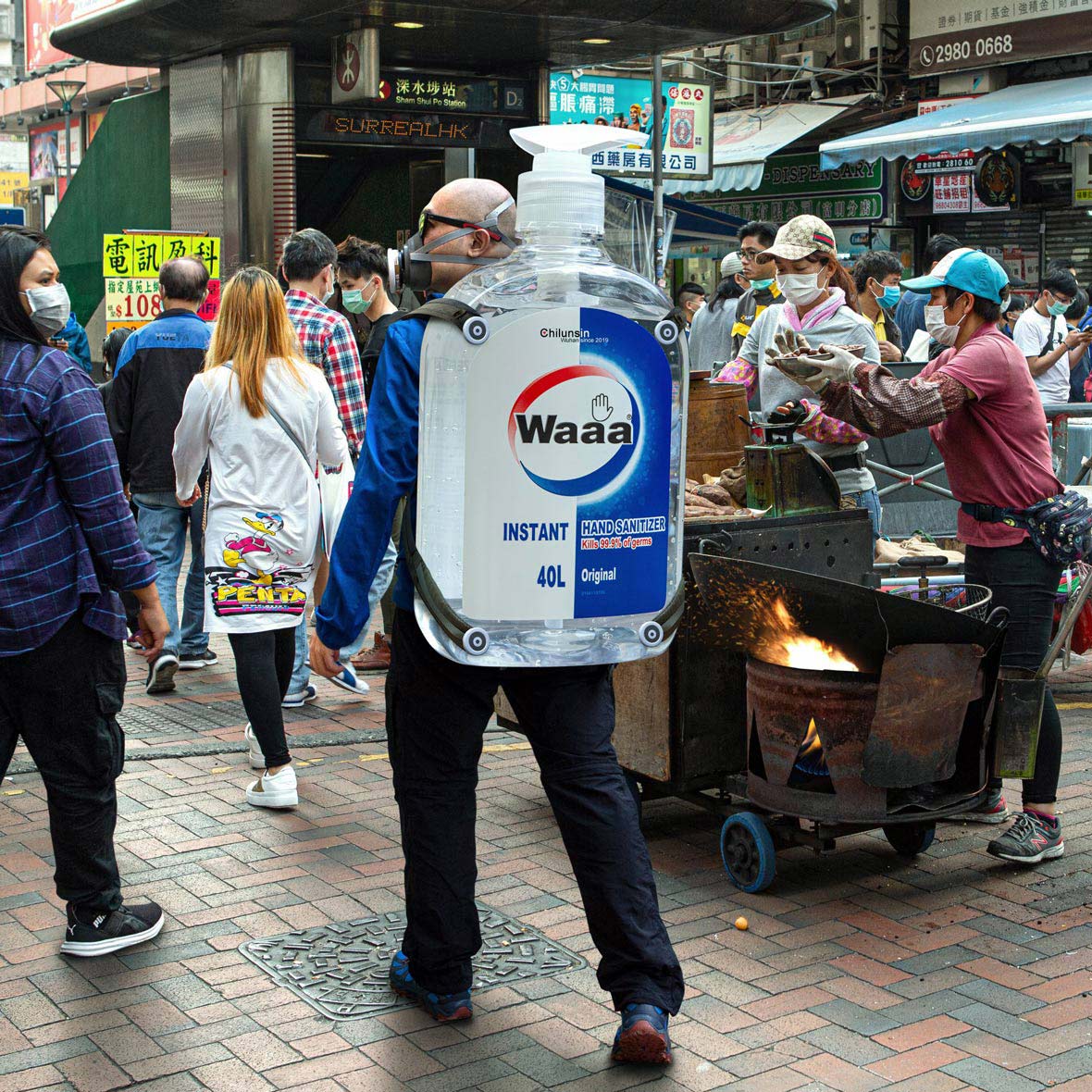 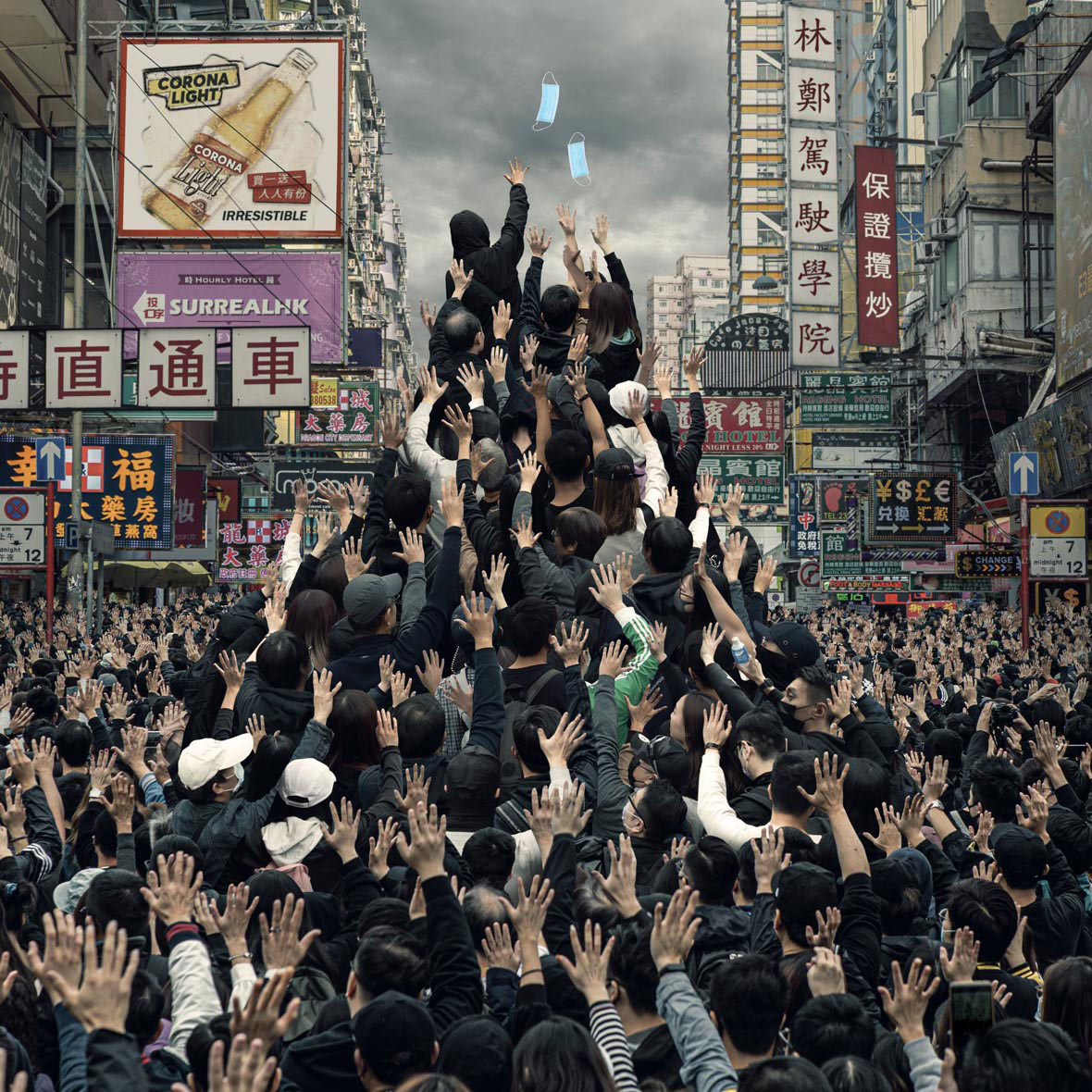 At the moment, Hong Kong’s inflated housing market is the issue Fung has been most troubled by. “People are always working, no end in sight,” he says. “With houses priced at tens of millions of dollars, many families can’t afford to buy a home their lifetime. Some people just live inside a small room for their entire lives.”

Ordinary people shouldn’t have their backs to the wall, he believes, but when the odds are this stacked, a bit of optimism is all he can hope to provide. “Even if reality isn’t all that rosy, I still want to uplift peoples’ imaginations with my work,” he says. “That’s the goal anyway.”

In this way, it’s perfectly fine to enjoy Fung’s work for what they are without reading too much into each image. As long as his work can bring a smile to someone’s face, then it’s enough for him. That moment of happiness can, hopefully, allow someone to see beauty and light even in places where there seems to be none. Now, a year since uploading his first image, Fung’s Instagram account has grown to over 120,000 followers. Having found renewed creative purpose, he’s as motivated as ever to continue shooting, editing, and making people smile. 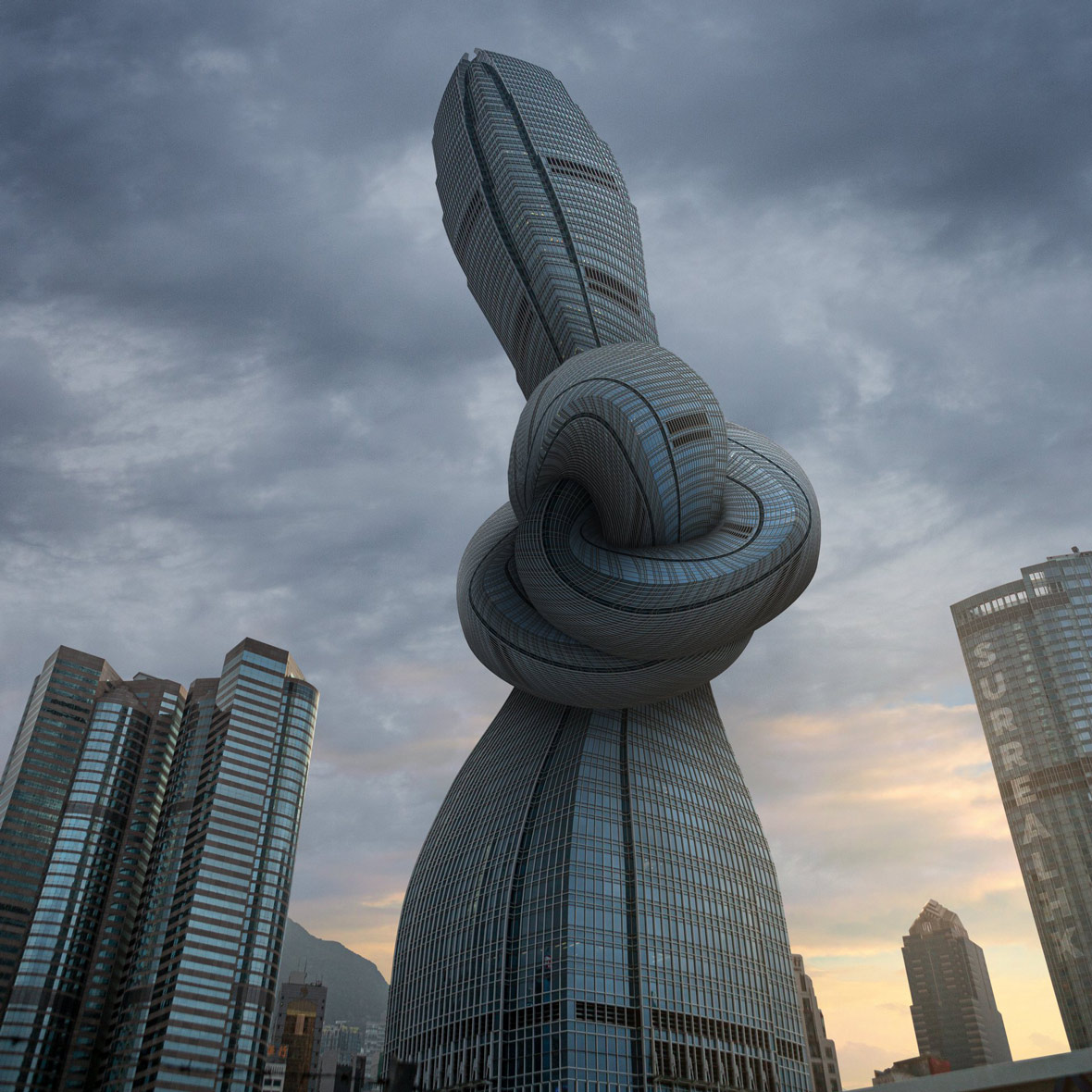 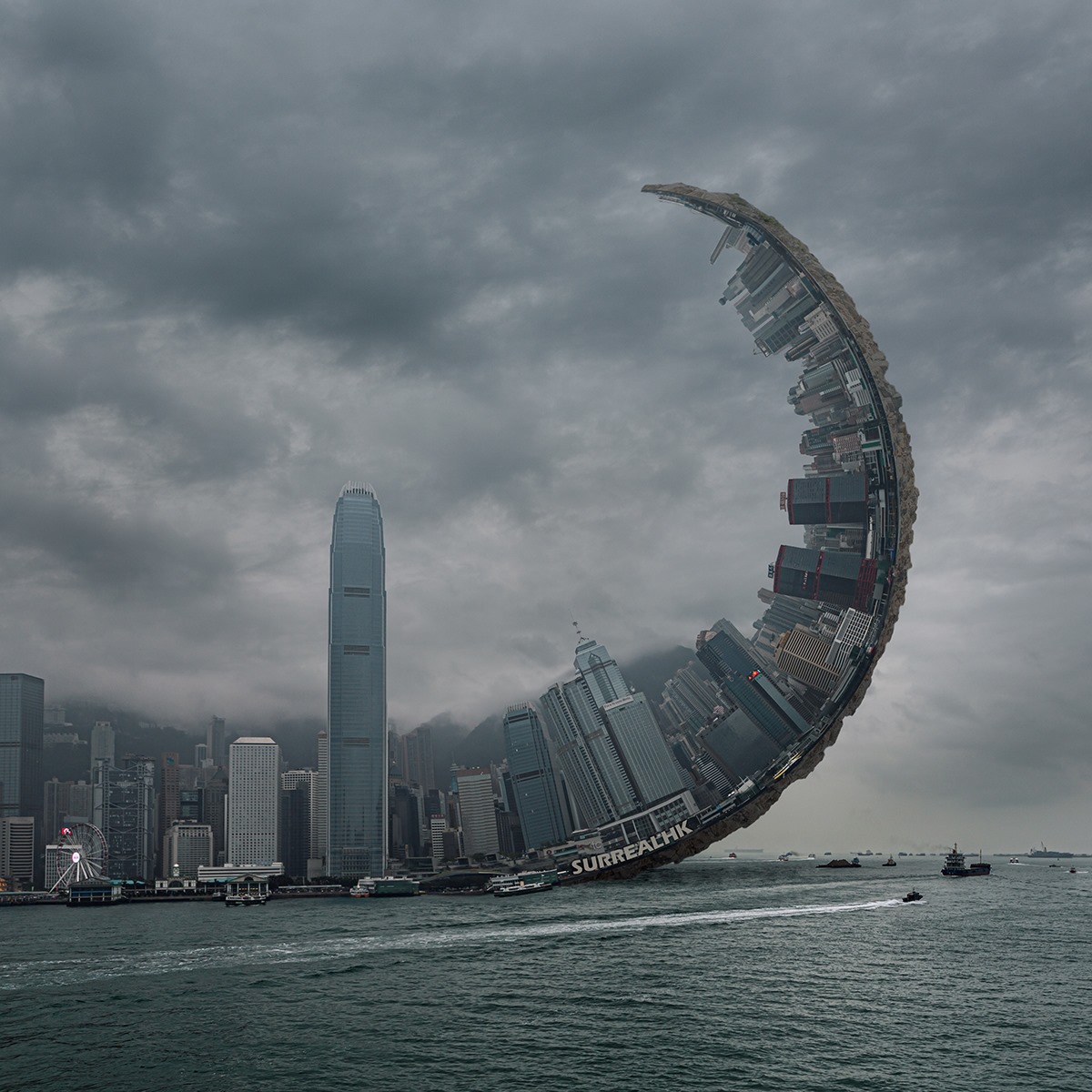