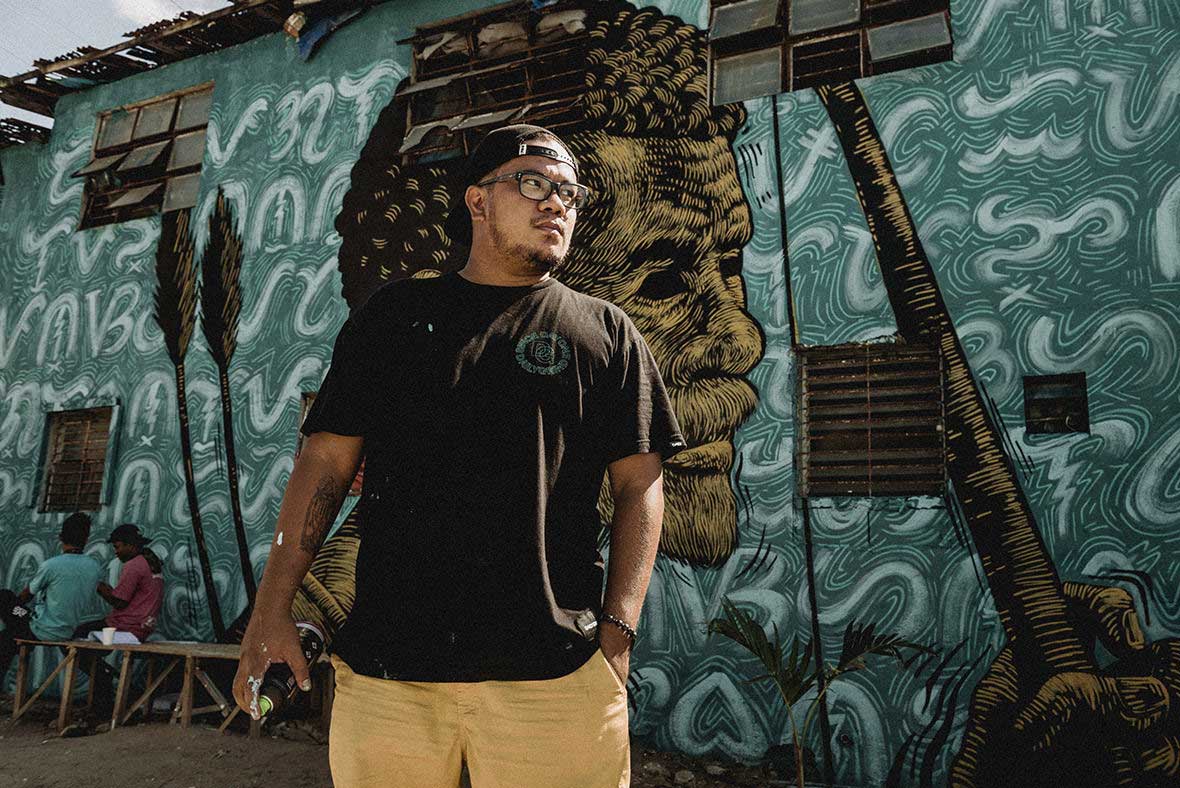 The sun shines brightly in a cloudless, blue sky while the sound of waves crash on a nearby beach. We’re in Liwa, a surfer community in the Philippines, and since it’s a weekday the town is mostly deserted, other than a few locals lounging in the shade watching Archie Oclos paint his newest mural.

Despite the sleepy setting, Oclos isn’t here on vacation—he’s on a mission. He defines himself as a provocateur, using art as a medium to broadcast discontent and raise awareness of social issues. And it’s a life that has repercussions. In a country that doesn’t tolerate dissent well, his murals have resulted in violence against him and threats to his family. But that’s only inspired him to keep working. 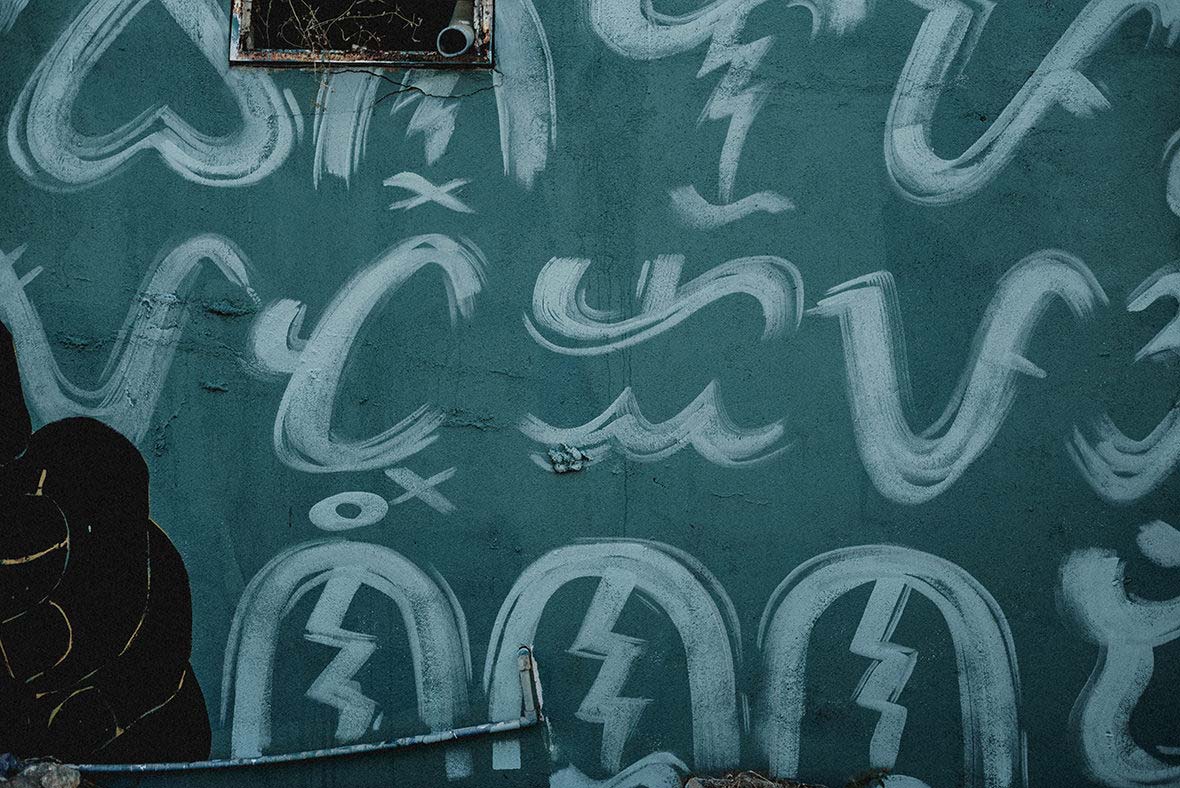 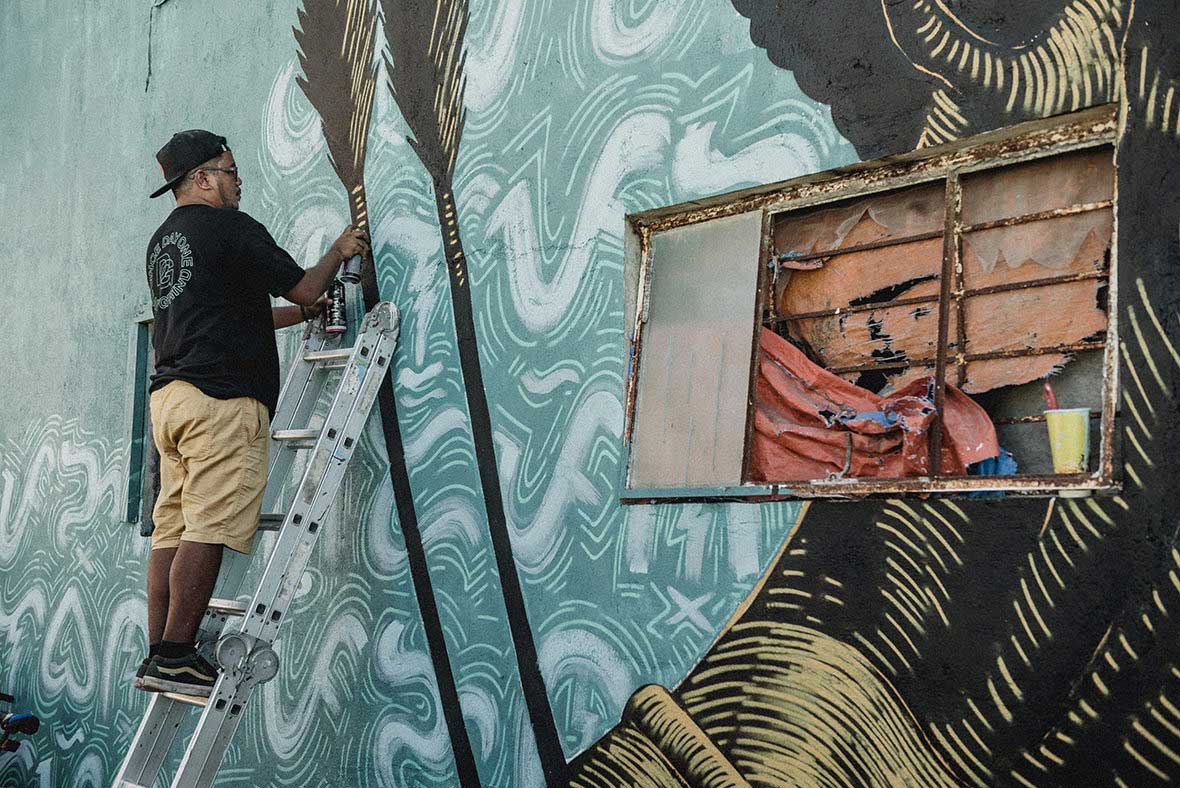 The profile of an indigenous character fills the center of the Liwa wall, rendered in a black silhouette with ochre line work, his bow and arrow stretching from the ground all the way to the two story roof. The character is a member of the Itas, considered to be the first inhabitants of Zambales, the province where Liwa is located. Stretching across the background in sea blue are rows of Baybayin calligraphy, a pre-colonial writing system that was used across the entire island nation at one point. A smaller line  in the upper left hand side, written in Tagalog, reads “You fight for the land and take good care of it.”

Oclos’s paintings generally focus on Filipino farmers and indigenous people. “They are the minority groups in our society,” he explains. “They are the most oppressed by military and the state forces, and there are lots of stories from the rural areas that need to be told.” A good example of the issues that he works on can be found in an installation at a sugar plantation called the Hacienda Luisita. It depicts a farmer hanging on a cross. The plantation, partially owned by the family of late former president Benigno Aquino III, has been dogged over the years with accusations of murder, land theft, and appalling conditions for its workers. 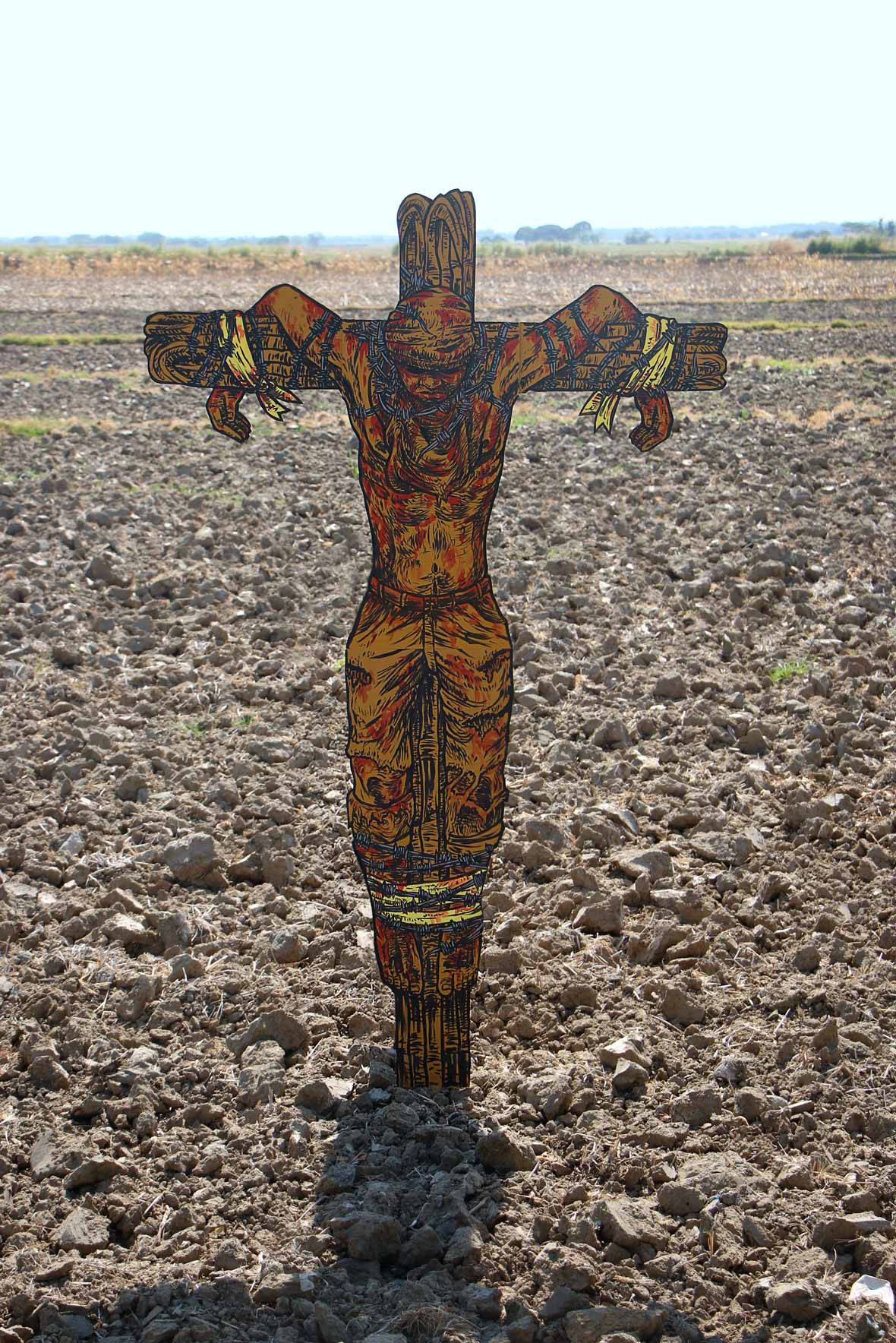 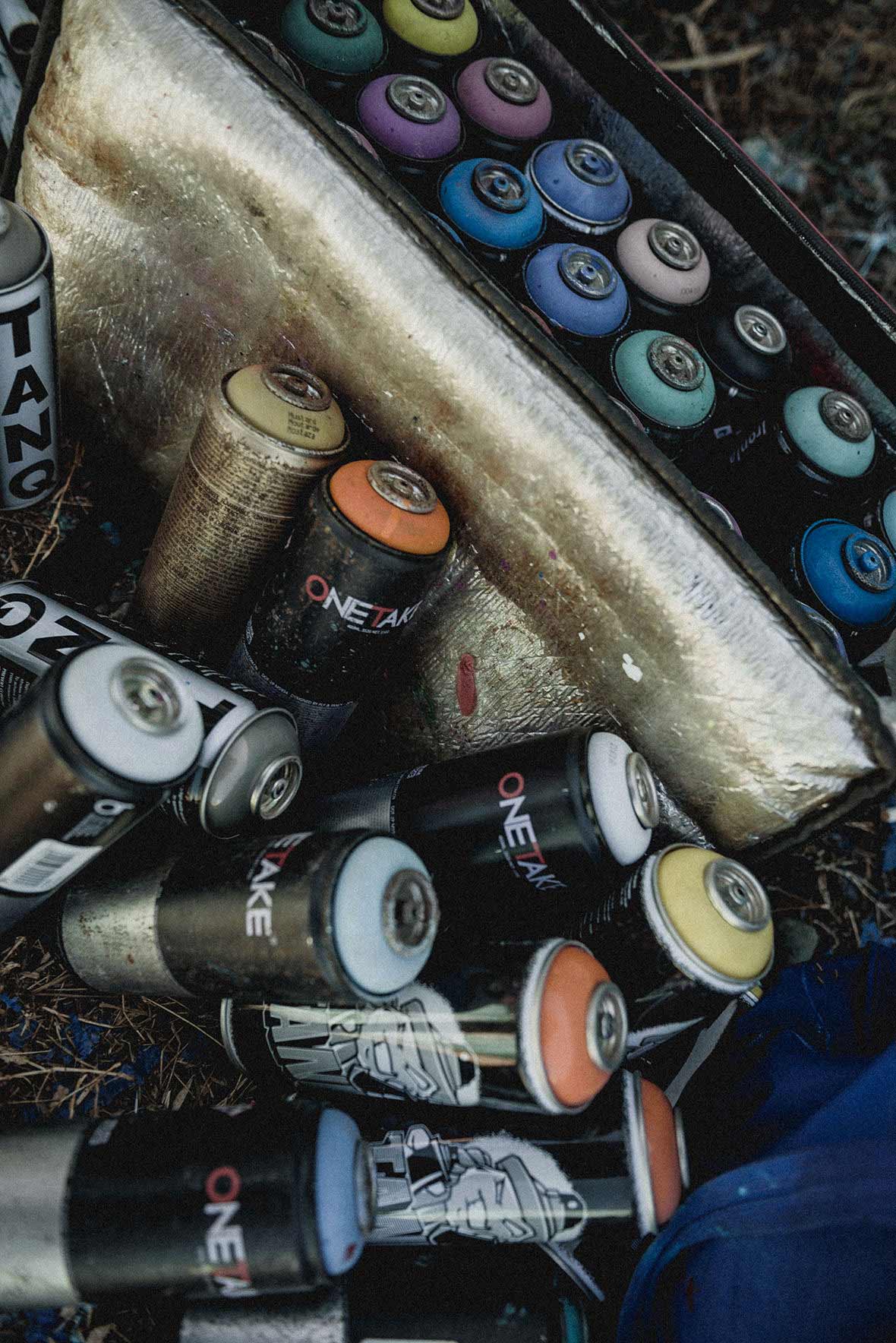 Oclos comes from a family of farmers, and his parents migrated to Manila when he was nine years old. While his mother gave up farming to become a school teacher and worked for less than minimum wage, his father couldn’t find work, and they weren’t able to escape poverty. “We moved around Manila a lot,” the painter recounts. “Surviving on a day-to-day basis was  hard. There were times we went hungry, and sometimes we had only one meal of fish and rice per day.”

He wanted to be an artist since he was a little kid drawing dinosaurs and cartoons, but his parents pushed him to become a doctor or a lawyer. “They didn’t support my art because of the stereotype that artists don’t make money, that it’s just a hobby.” Although he studied hard and got a scholarship to a science high school, the bug never left him and when he left for college at age 16, he decided to study art. His fraternity helped him get another scholarship to study for free, and he supported himself by working as a photographer’s assistant.

After graduation he started working in video games. He taught himself digital painting and sent a portfolio to an online job posting, becoming a concept designer for EA Games and Disney. It wasn’t satisfying work though, and he found himself asking, “What is the purpose of art during trying times?” 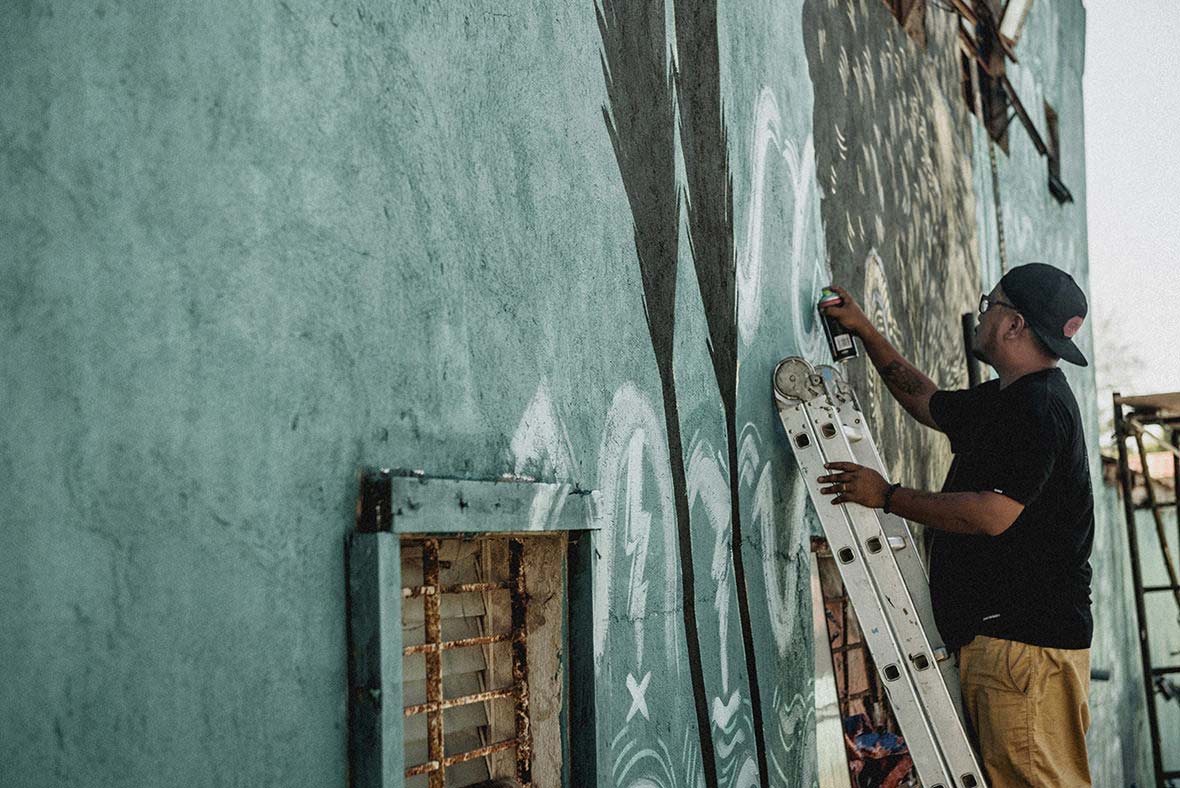 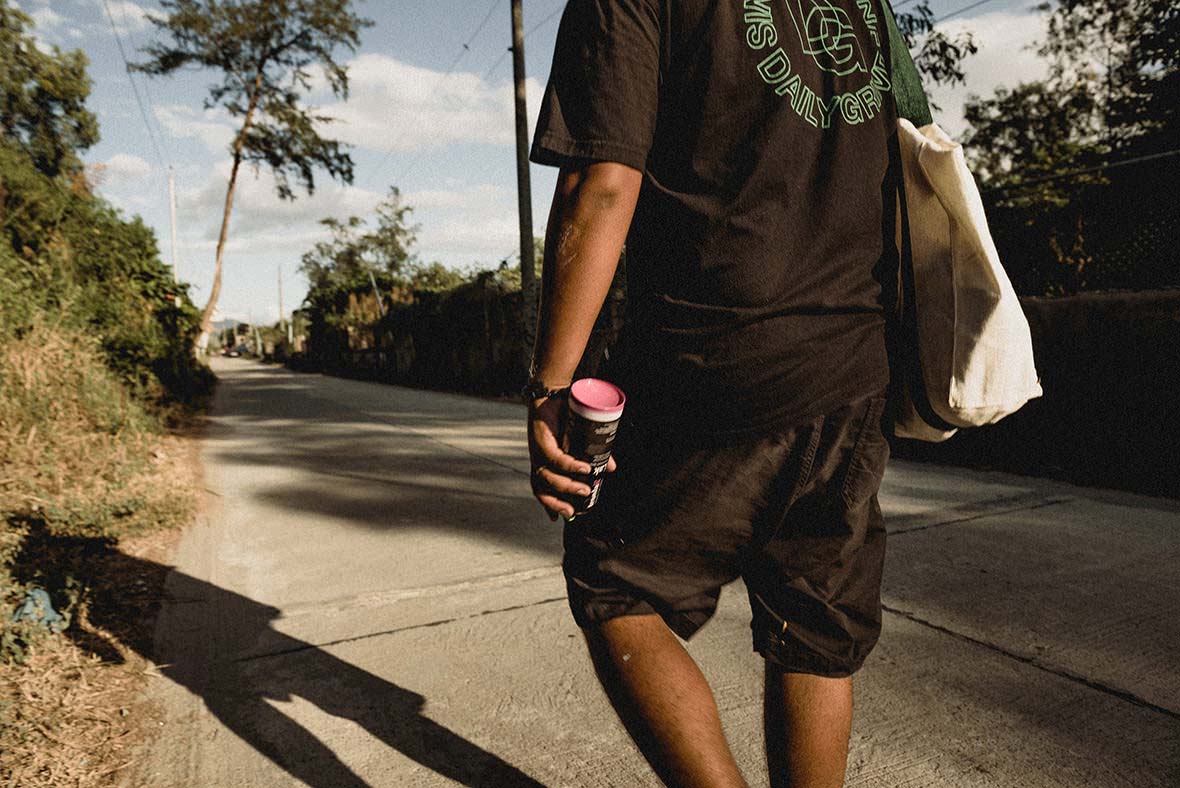 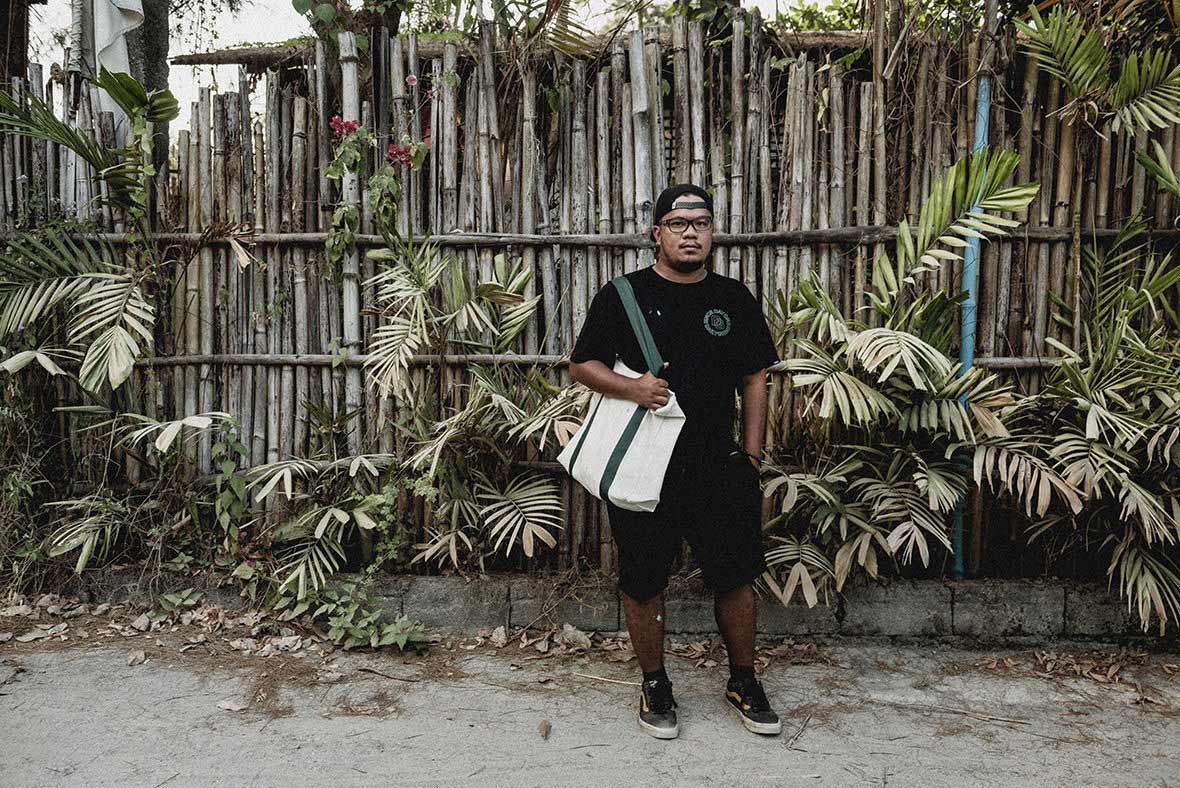 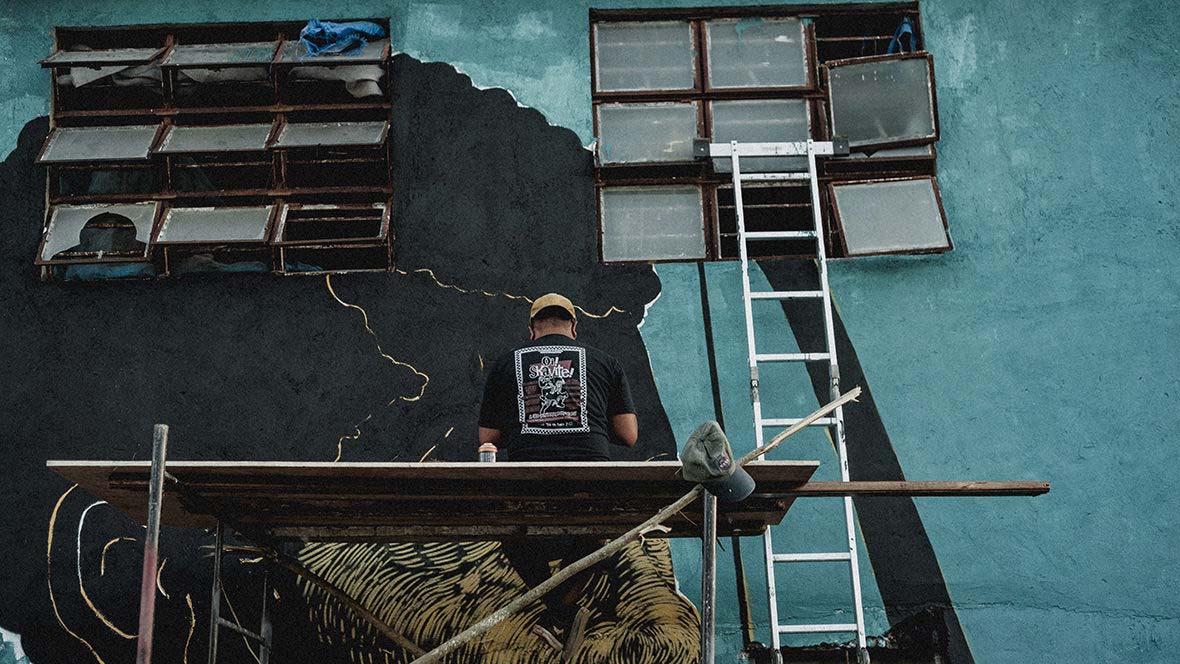 In high school he used to draw political cartoons, and during college he was part of a protest art group. So once he tired of the video game world, he went straight into political street art. Almost immediately he caught the attention of the military. As part of a 2015 event held by Food Not Bombs, an organization that gives out free food to the poor, he painted a mural of an old woman with a crown of thorns made of bullets. It was accompanied by the words, “Stop Lumad Killings,” a phrase that was trending on Twitter, sparked by a spate of murders that year of tribal leaders of the Lumad people. The Lumad are the indigenous majority in the Philippines, located mainly in Mindanao, an island at the southern end of the country. Some have accused the military of supporting the group that killed the leaders as part of a campaign to clear the land for corporations. Today, the Lumad face continued oppression, and Mindanao is currently under martial law. 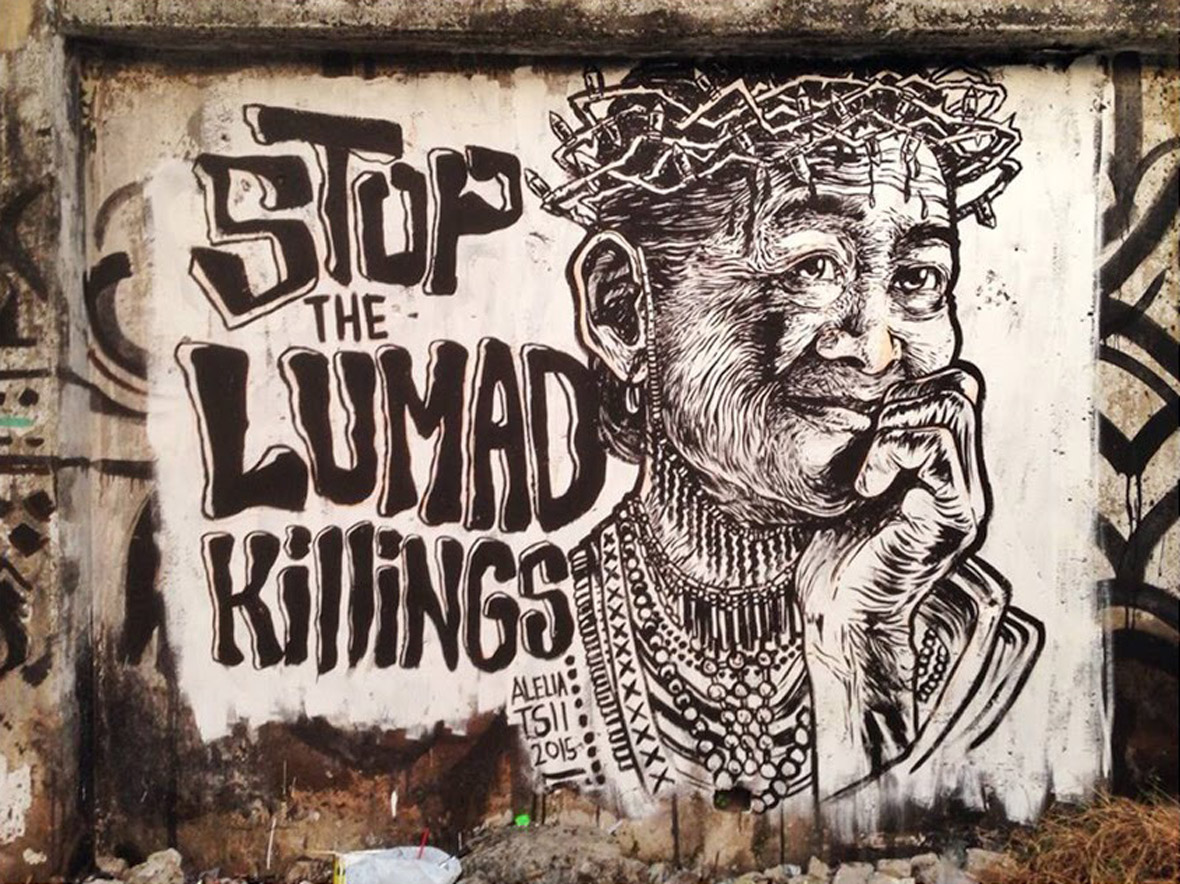 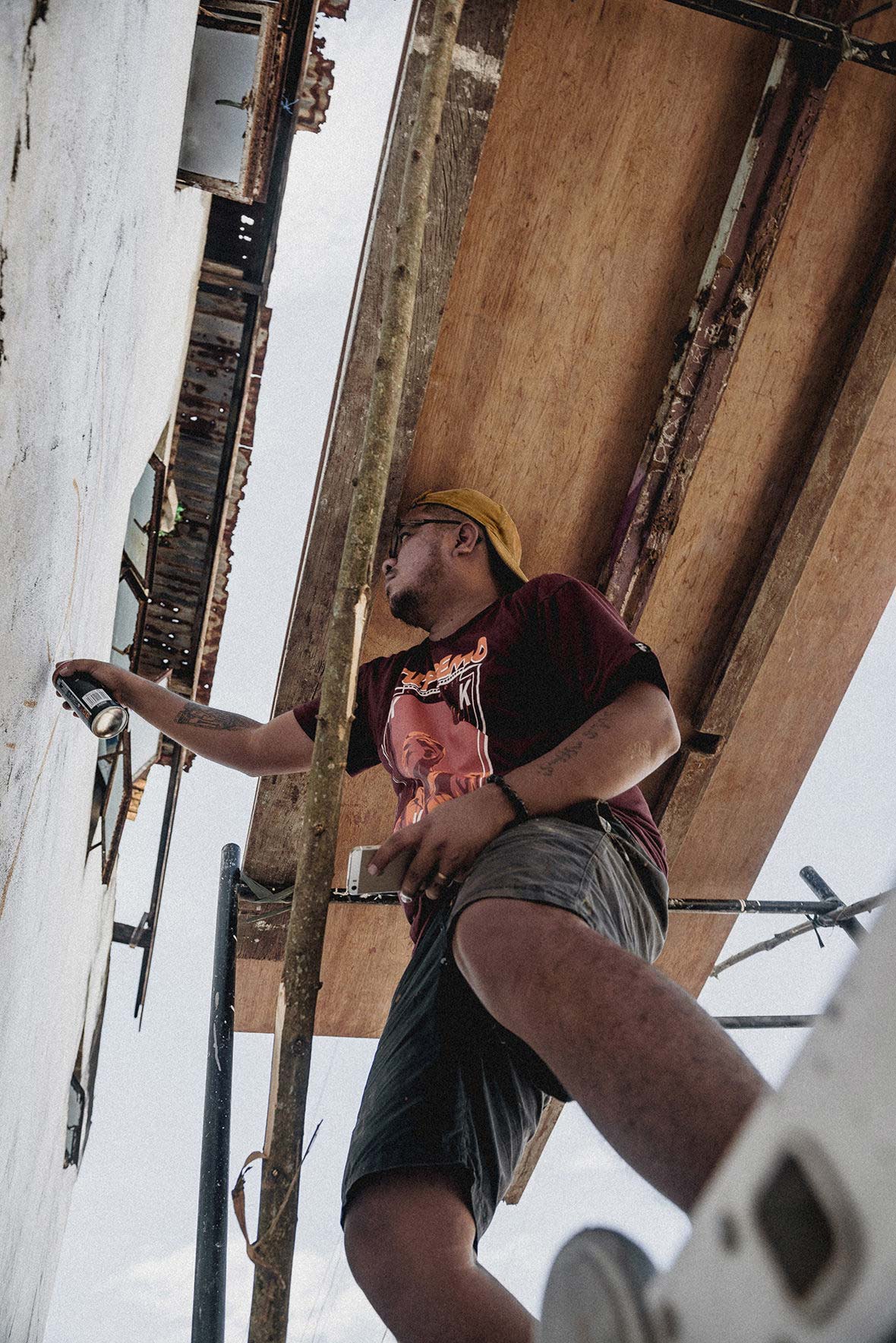 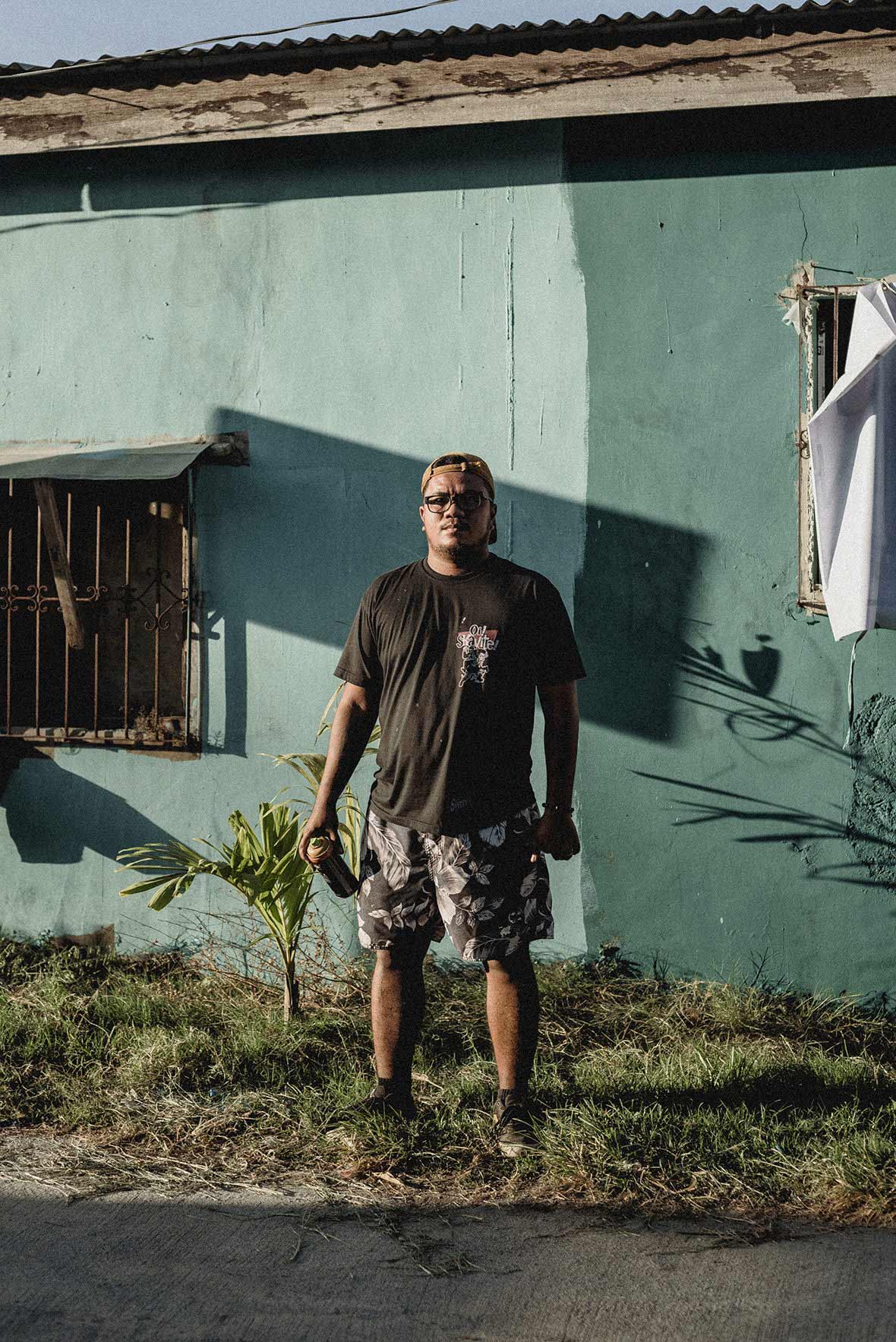 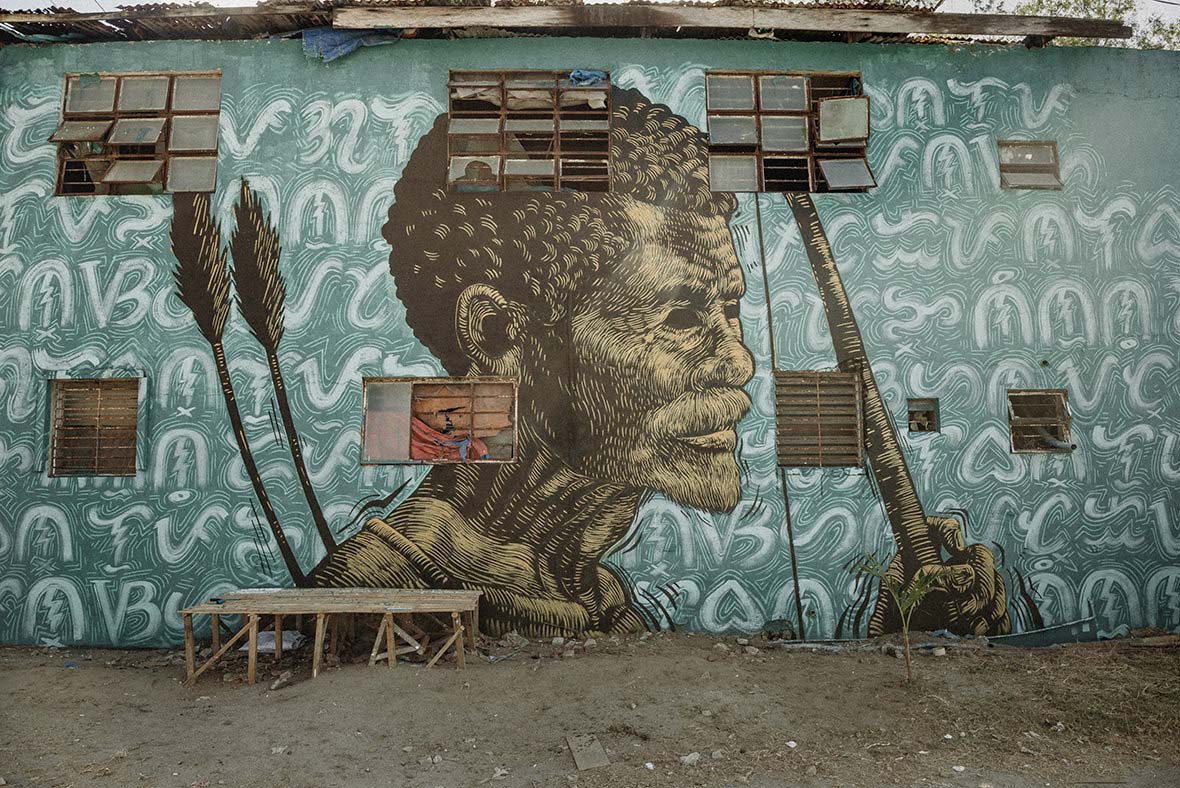 Early one morning a short while later,  someone in plain clothes approached Oclos on his way to work and put him in a headlock, choking him. After wrestling for a few moments, the man let him go. “I could tell he was military because of his hair cut, his muscles, and the way he talked. There were three or four of them, and the others were guarding him,” Oclos says. The man told him he knew who he was and where he lived. “Then he gave me a brown envelope containing pictures of my girlfriend, who is now my wife, and a lot of my relatives: my grandparents, uncles, parents—even the kids, my cousins.”

It backfired, though, and rather than scare him off, it motivated him to paint even more: “It made me see the power of street art. Simple, two-dimensional art with no sound or moving images can still impact the system. It’s a way to speak up.” 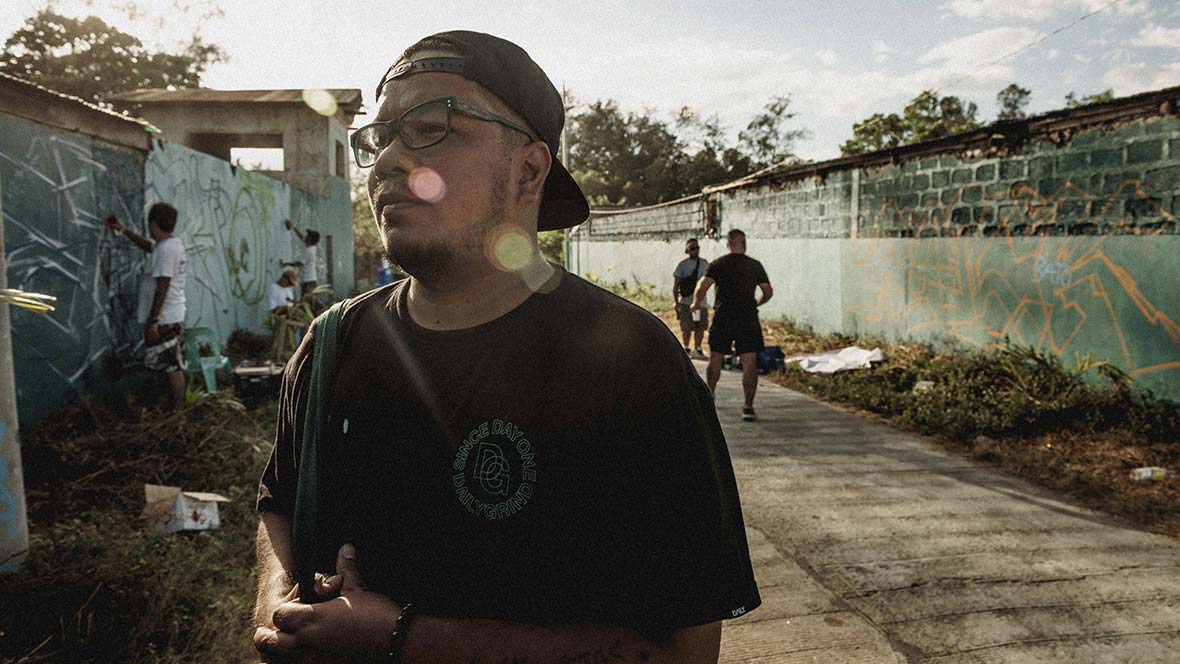 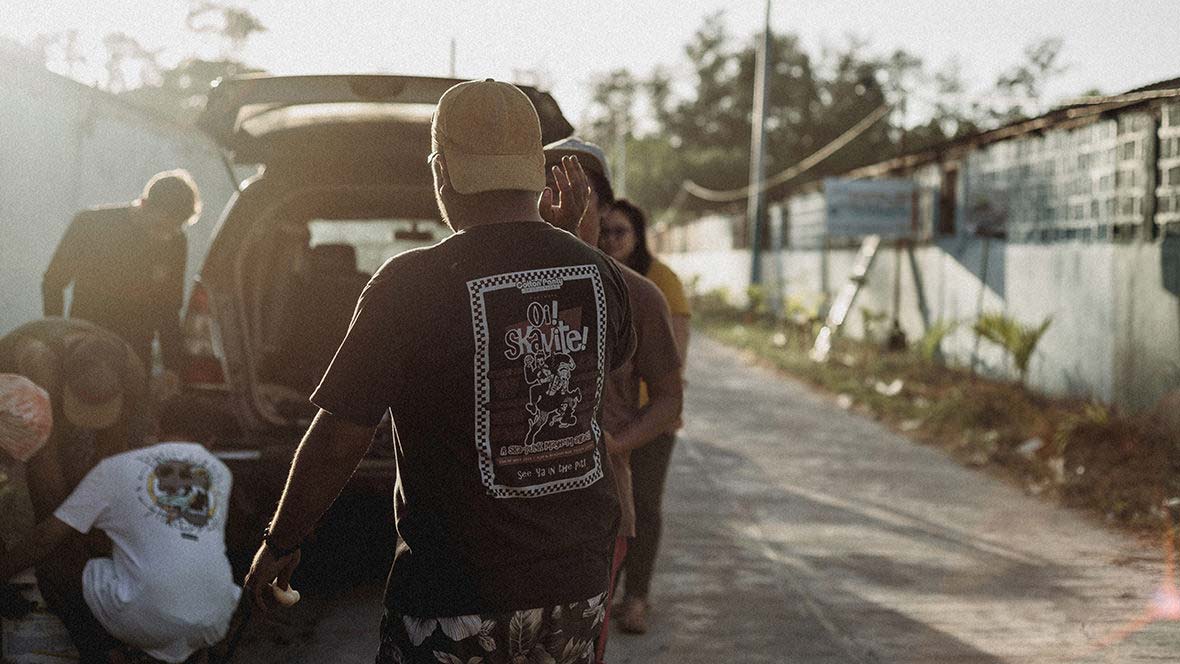 Recently, Oclos created his biggest political work to date, tackling the subject of extra-judicial killings here. After winning a Thirteen Artists award from the Cultural Center of the Philippines, one of the nation’s highest recognitions in the arts, he painted a mural on one of their outdoor walls. It depicted a dead body, rendered in black lines on a white background. He says the more than 20,000 strokes that make up the piece represent the amount of people estimated to have been killed in the country’s drug war led by the president, Rodrigo Duterte. 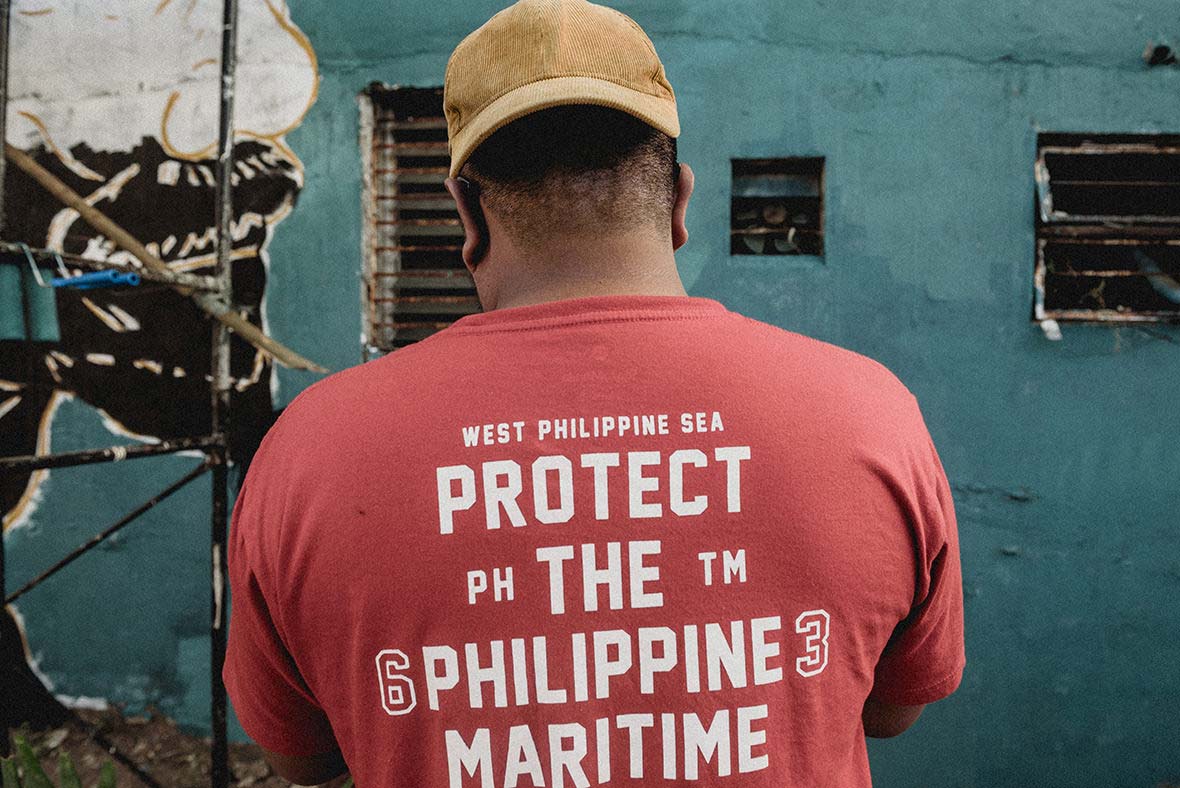 While taking a break from painting the mural, an elderly woman approached Oclos, saying that the piece was inappropriate, that it was overly negative. “I tried to convince her that we should see the face of death in order to appreciate the value of life,” Oclos argues. “Nowadays killing is normalized, which conditions people into thinking it’s okay to kill people. But it’s not.” 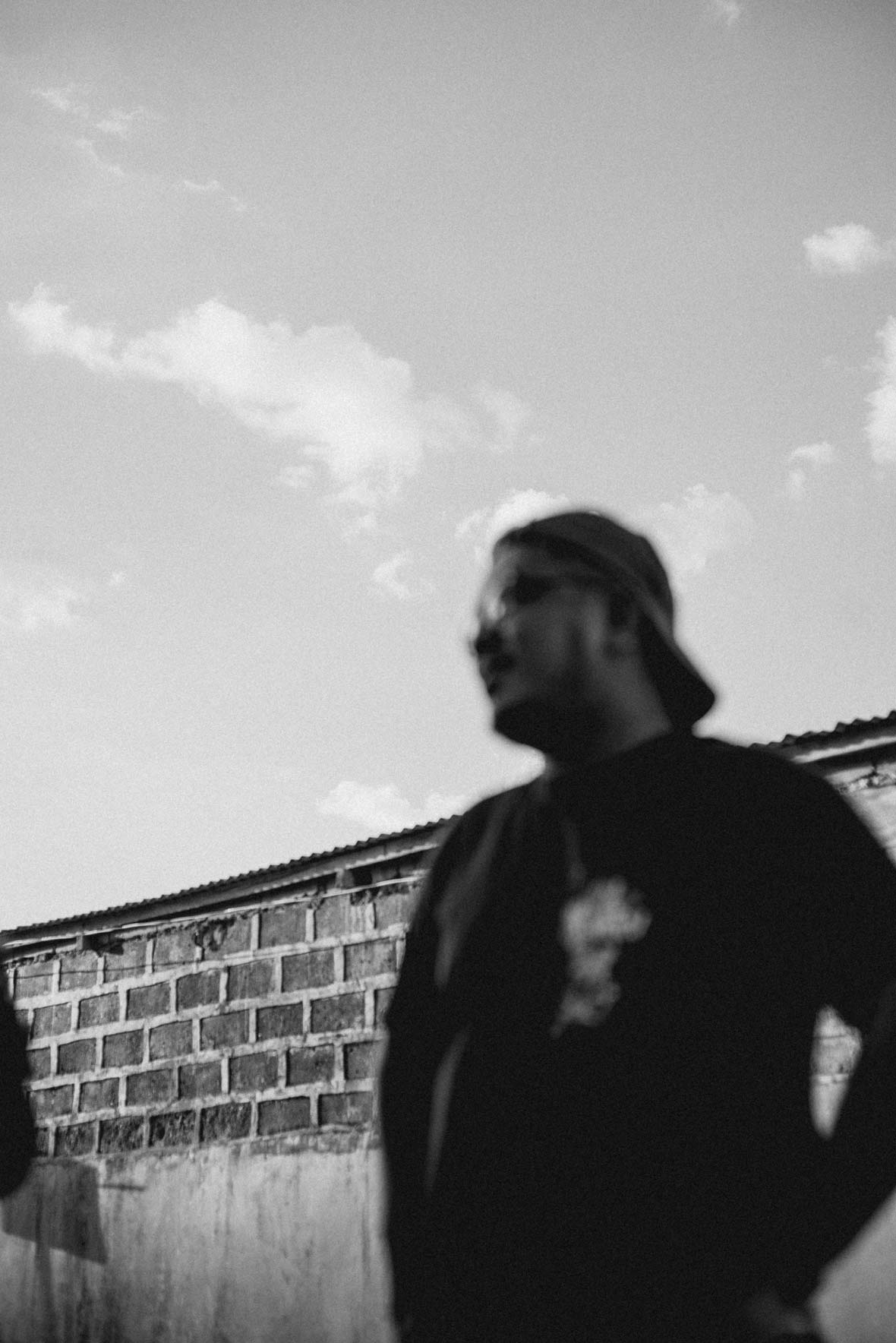