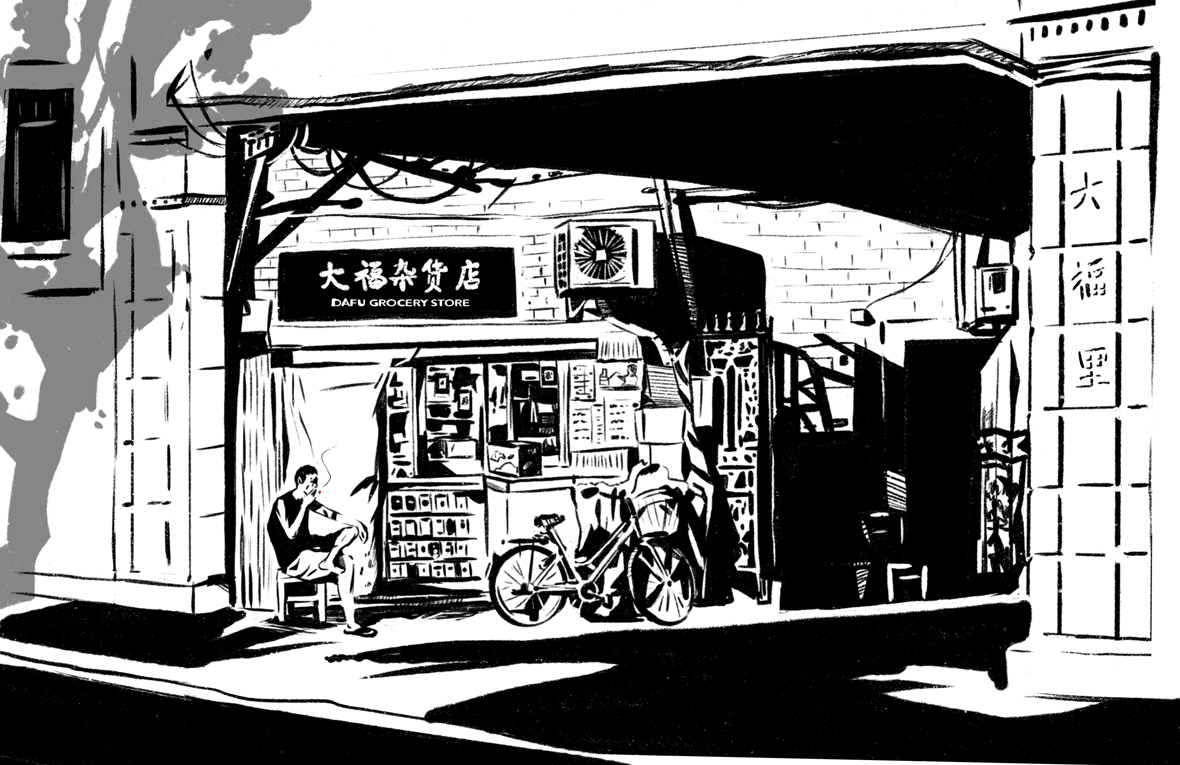 The work of illustrator Peng Kai peels back the contemporary sheen that many associate with modern-day Shanghai, focusing instead on the seemingly bygone parts of the city. Gazing at his art, viewers are instantly transported to simpler times—sights such as the mom-and-pops convenience shops hidden within the city’s alleyways, plaza dancing routines in Xiangyang park, and hole-in-the-wall baozi restaurant are given the spotlight. Though these types of places and activities are still around, they’ve become less relevant than days’ past, and they’re typically out of mind for younger generations.

“Nowadays, the younger kids in Chinese cities are mostly the same,” Peng says, explaining why the characters who appear most frequently in his art are older individuals. “I’m not purposely focusing on the older generation, but their lives encapsulate the city’s spirit in a much more faithful way.”

At its core, Peng’s work is a celebration of Shanghai’s distinctive essence, and in light of the recent lockdowns, the mundane moments that he spotlights seem to take on new contexts. They’ve become a reminder of how precious ordinary life can be, and how only when the mundanity we take for granted is gone, do we realize its beauty. 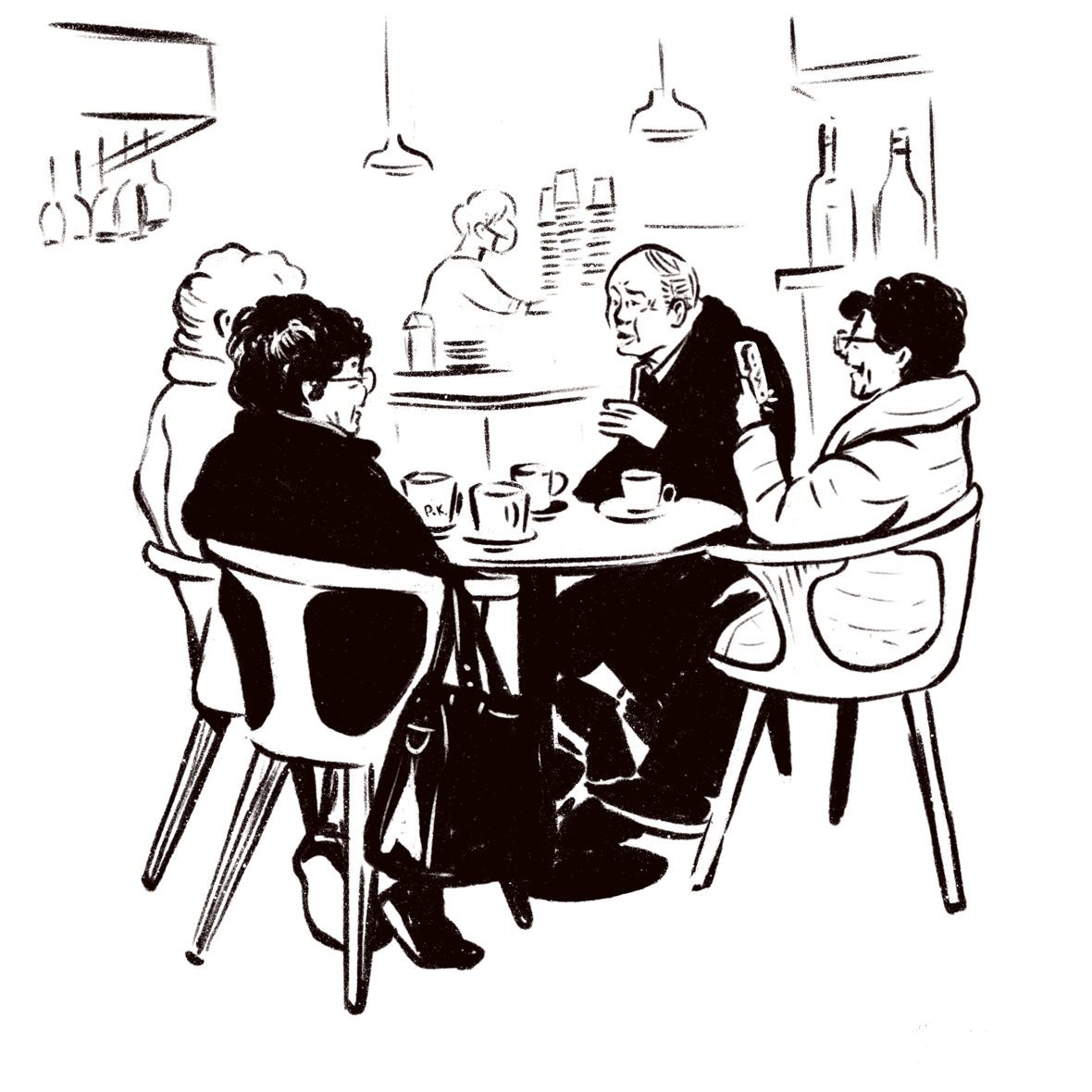 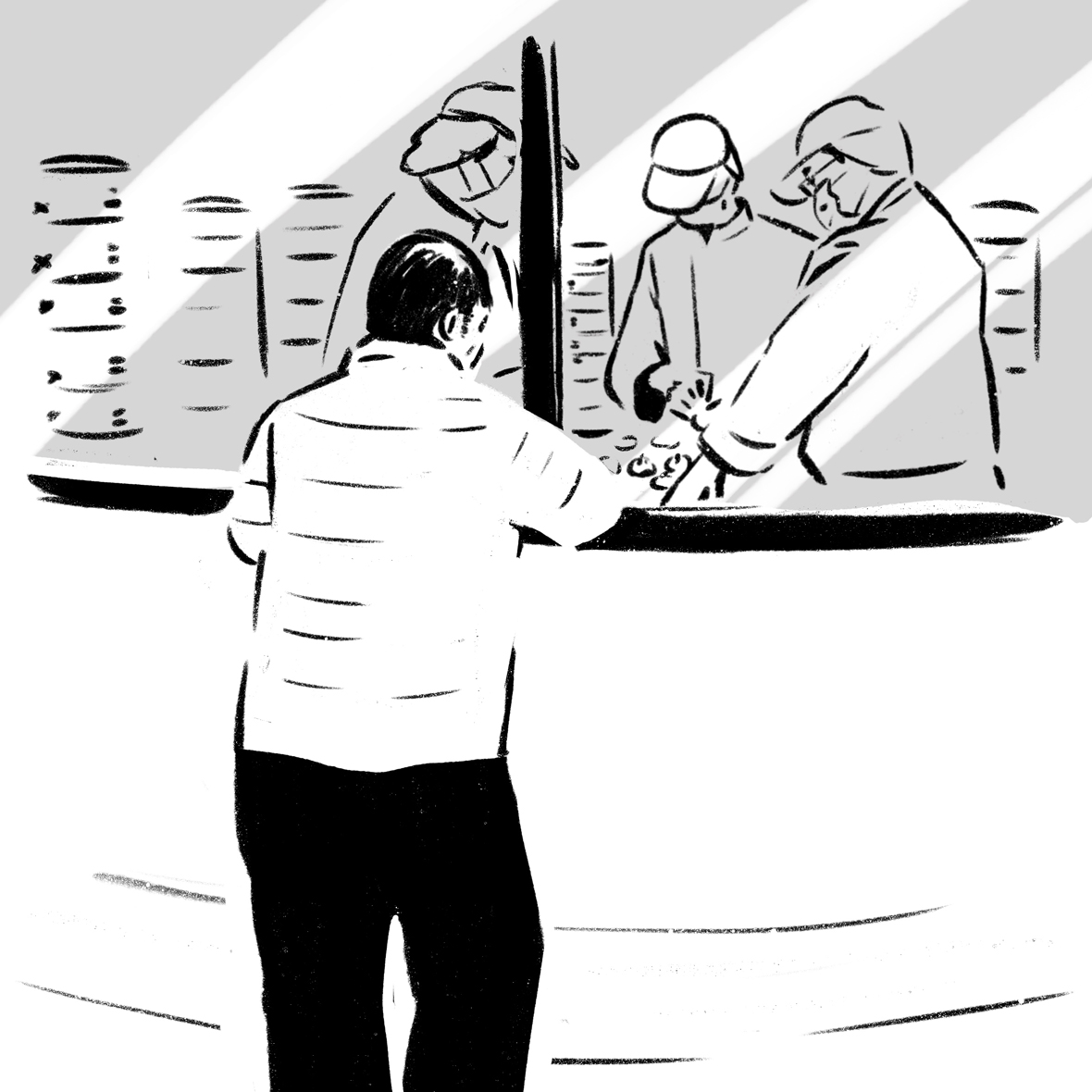 Peng was born and raised in Shanghai, and his enduring love for the city can be traced back to his childhood years. “When I was a kid, I lived in a four-story lane house,” he recalls. “My grandmother lived in a lane house near Ruijing Road, where there were rows of shikumen dotting the block. Every holiday, my cousins and I roamed through those back alleys and made it our playground. I have fond memories of my time there—even my memories of thinking that the shikumen’s restrooms were haunted and being afraid to go in I look back on fondly.”

The places that Peng experienced during this time are the source of much nostalgia today, and they form his impression of the city. Take for example, a two-story restaurant called Luxing that he often passed by. It’s sights, sounds, and even smells are vivid to this today. “I remember how brightly lit it was even at nine at night,” Peng says. “The steam that poured out from the storefront, the silhouettes of customers inside, and the lively energy.” 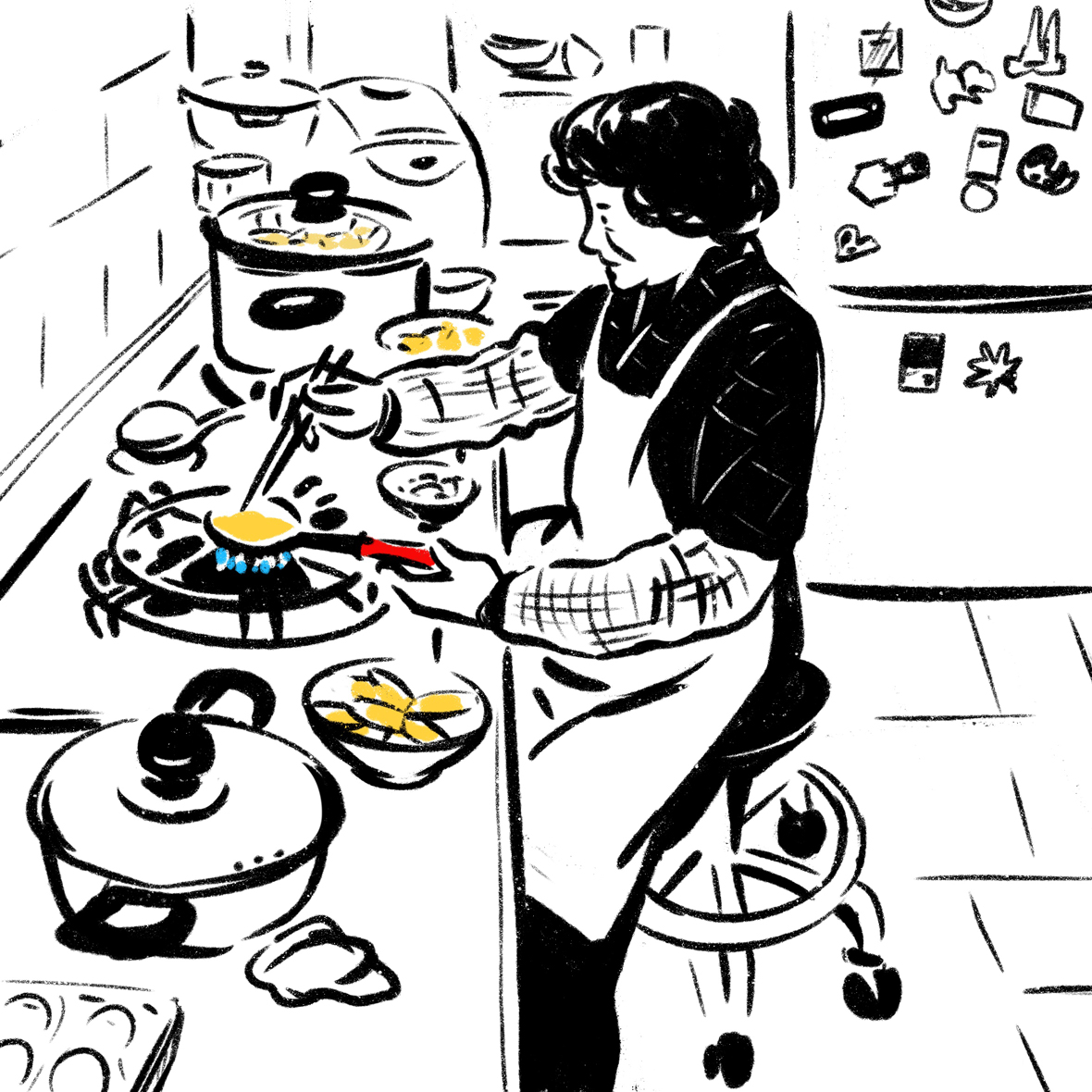 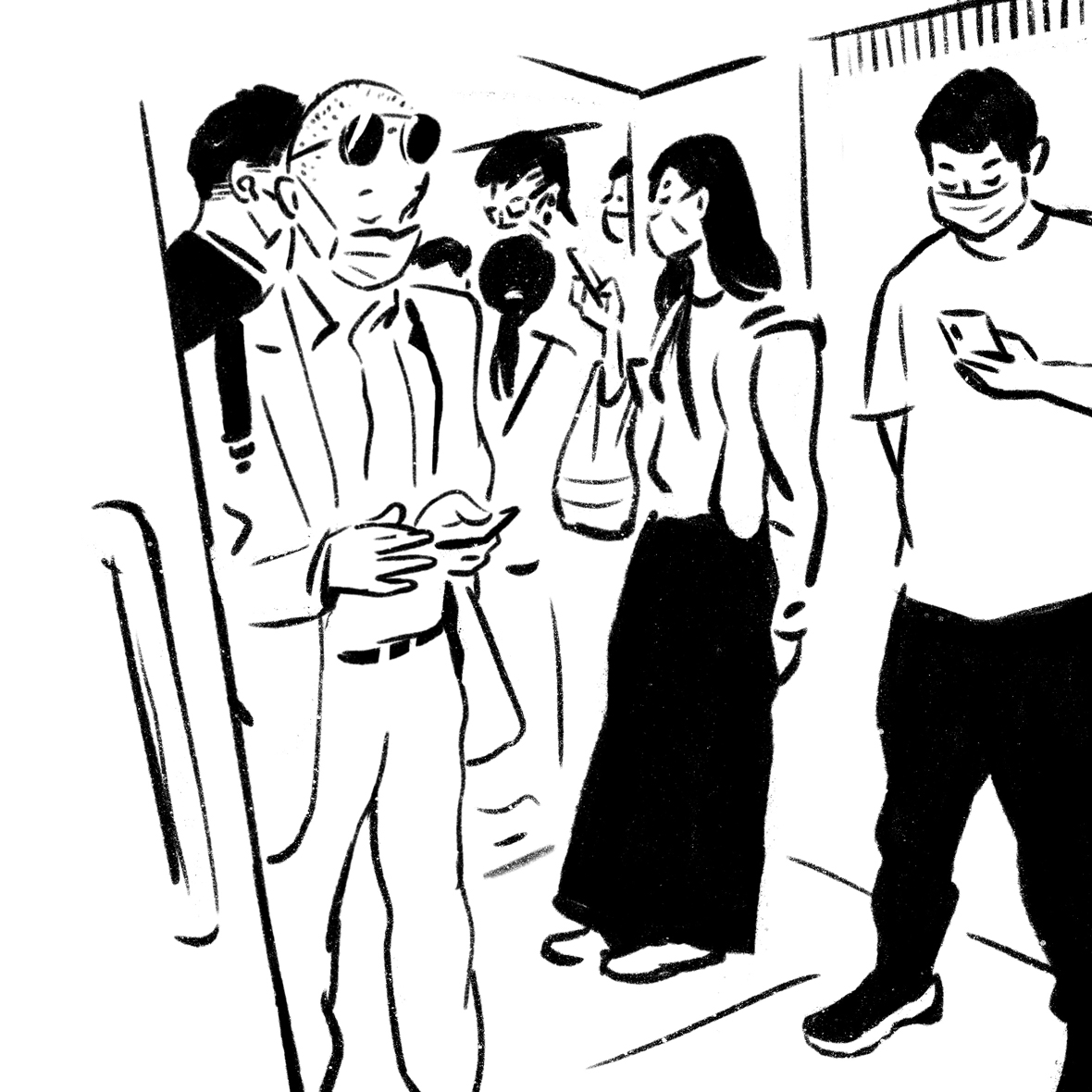 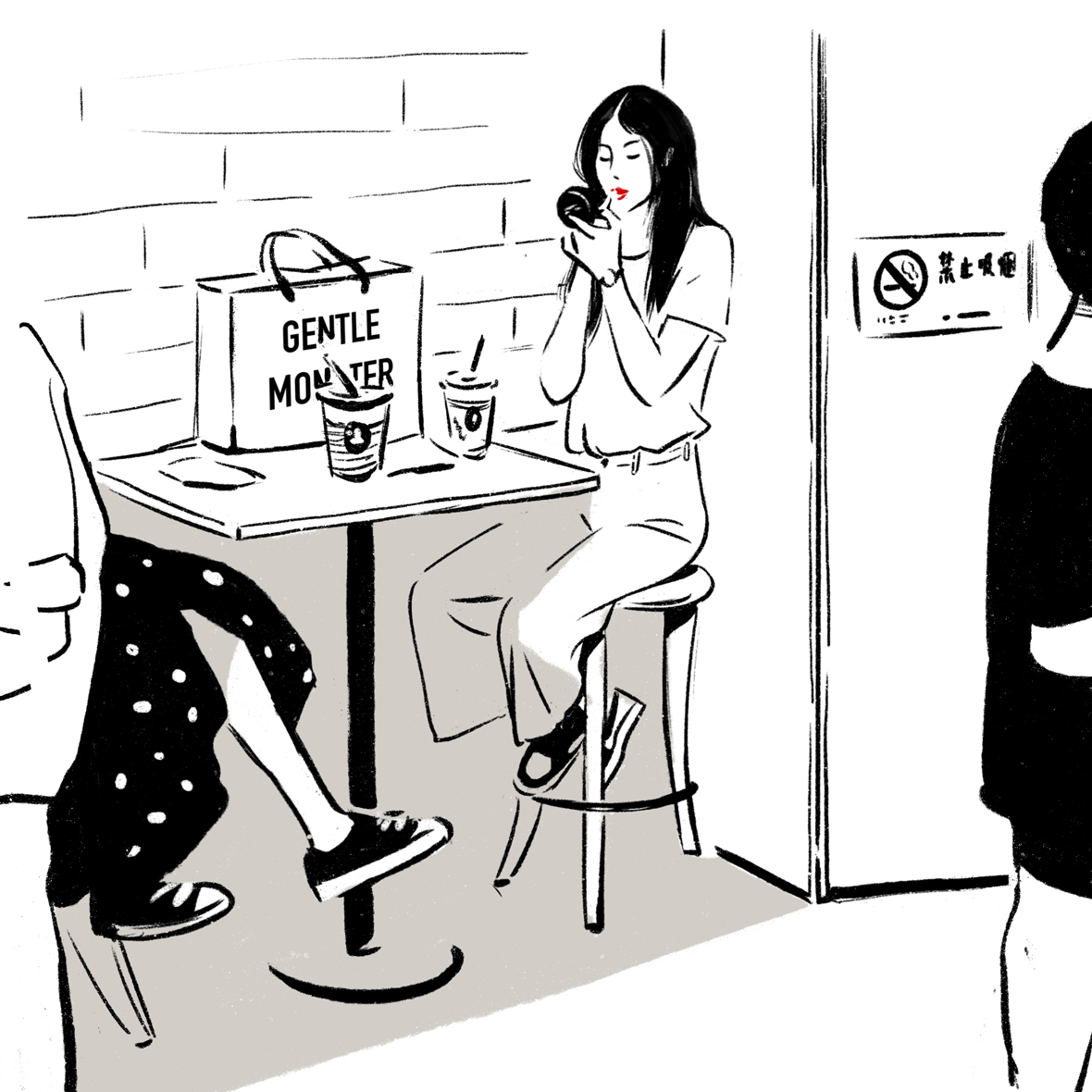 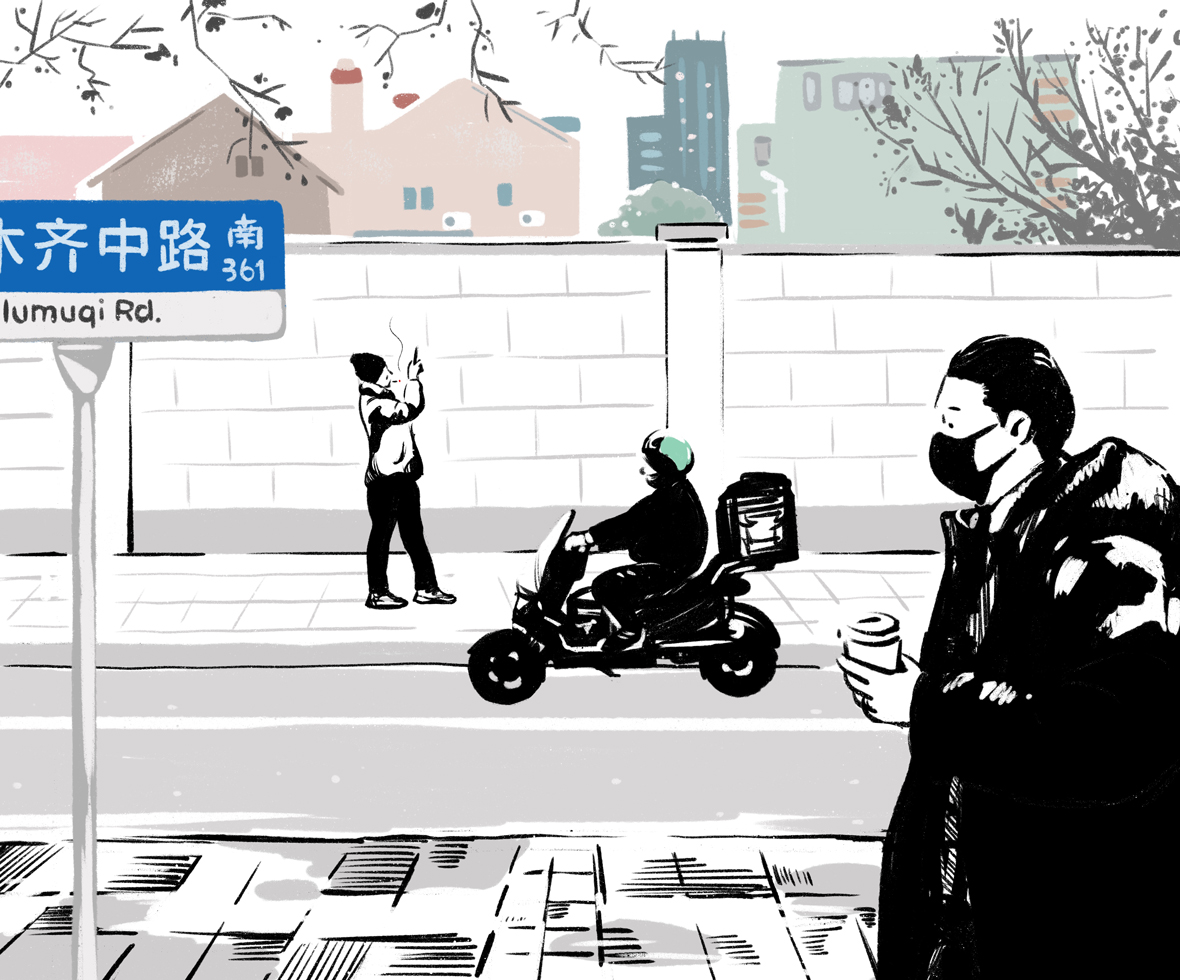 In 2016, Peng discovered American illustrator Jason Polan’s Every Person in New York series, and he was inspired to recreate the project for his hometown. Every Person in Shanghai is similarly pared down, depicting the city’s people and its locales in either completely black-and-white or with minimal colors. Despite the simplicity, his illustrations are vivid portraits of life in the city.

Being observant is a habit that’s stuck with Peng since his younger years, and he believes it’s essential to his work. “As an illustrator, the ability to observe and replicate my observations with my art has become instinctive,” he says. “I think people nowadays are less observant, too distracted by their phones to the point where they can’t even glance away from it while walking down the street. Since everyone lives vicariously through their phone screens, I thought my illustrations can help remind people of the beauty you miss when you never look up.” 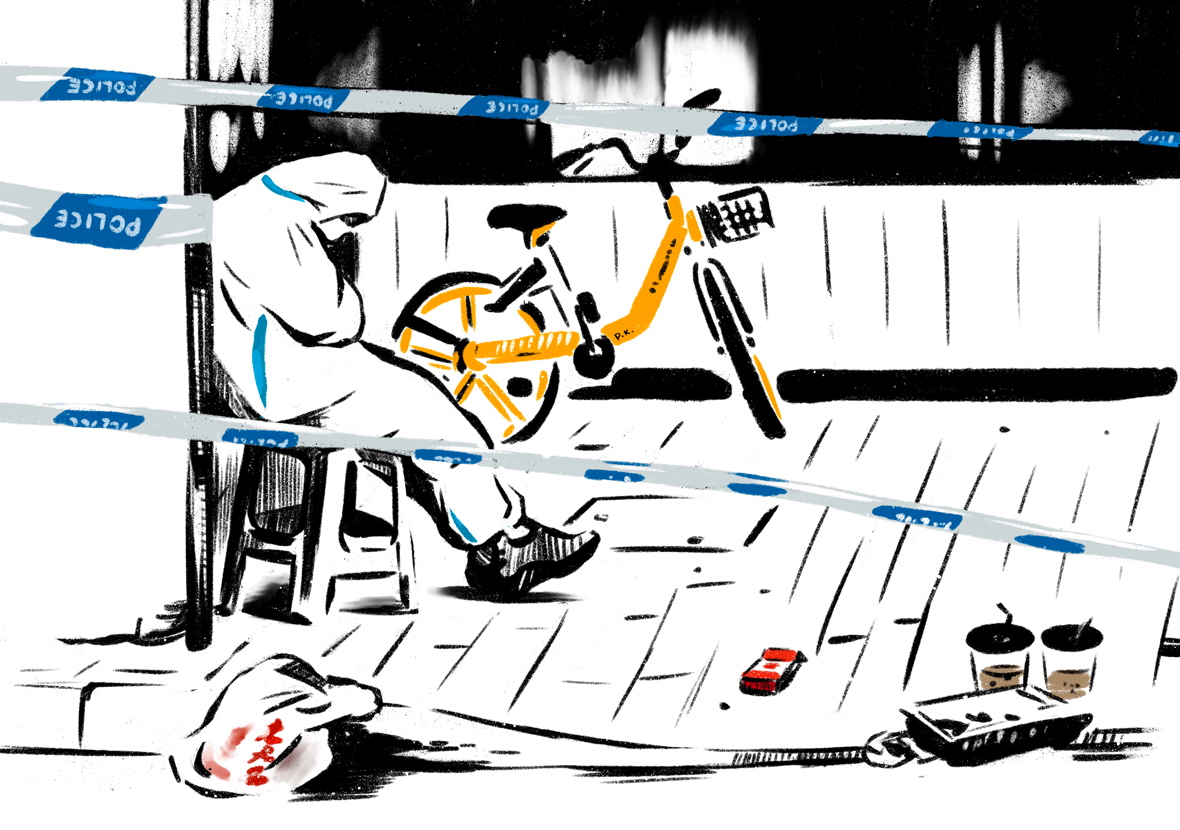 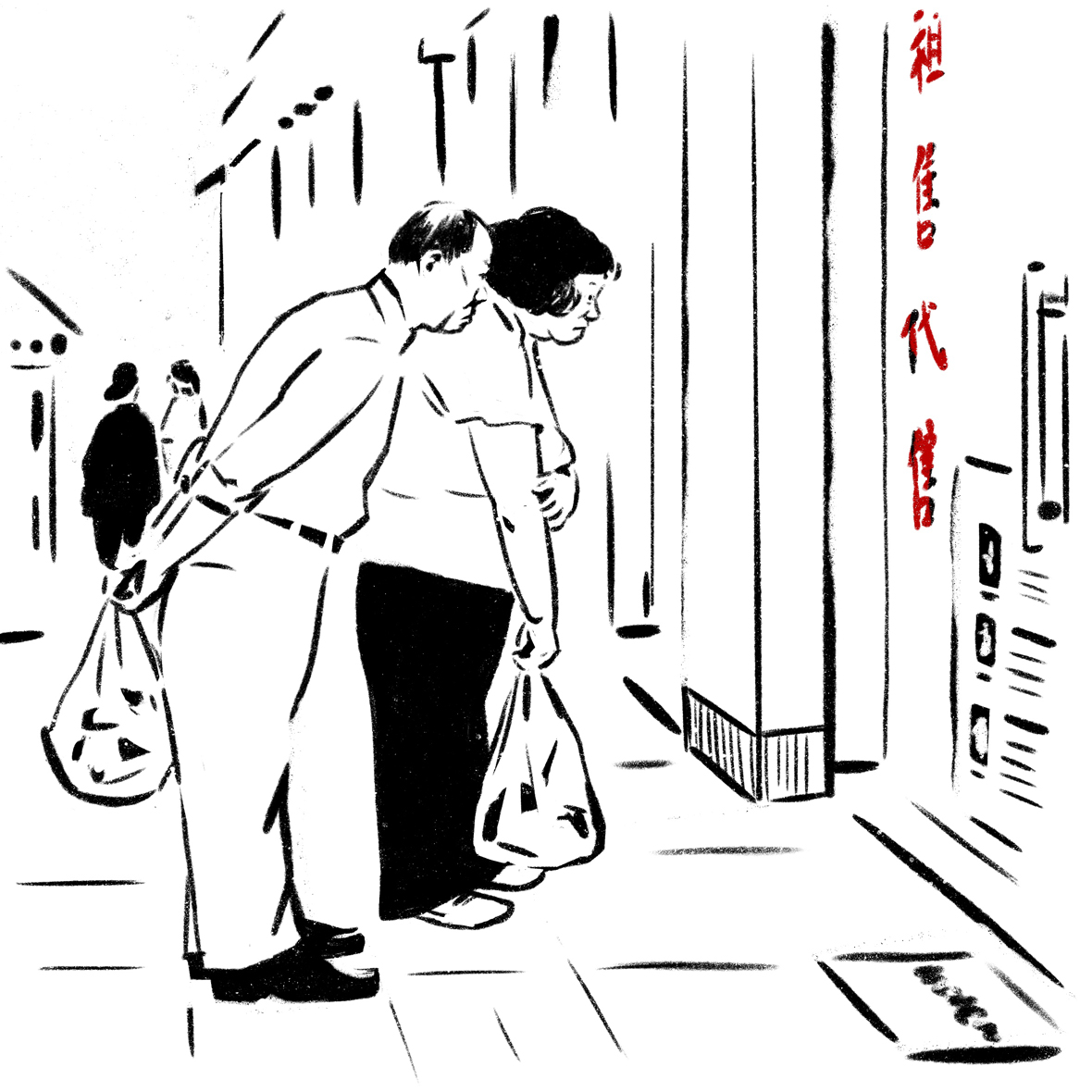 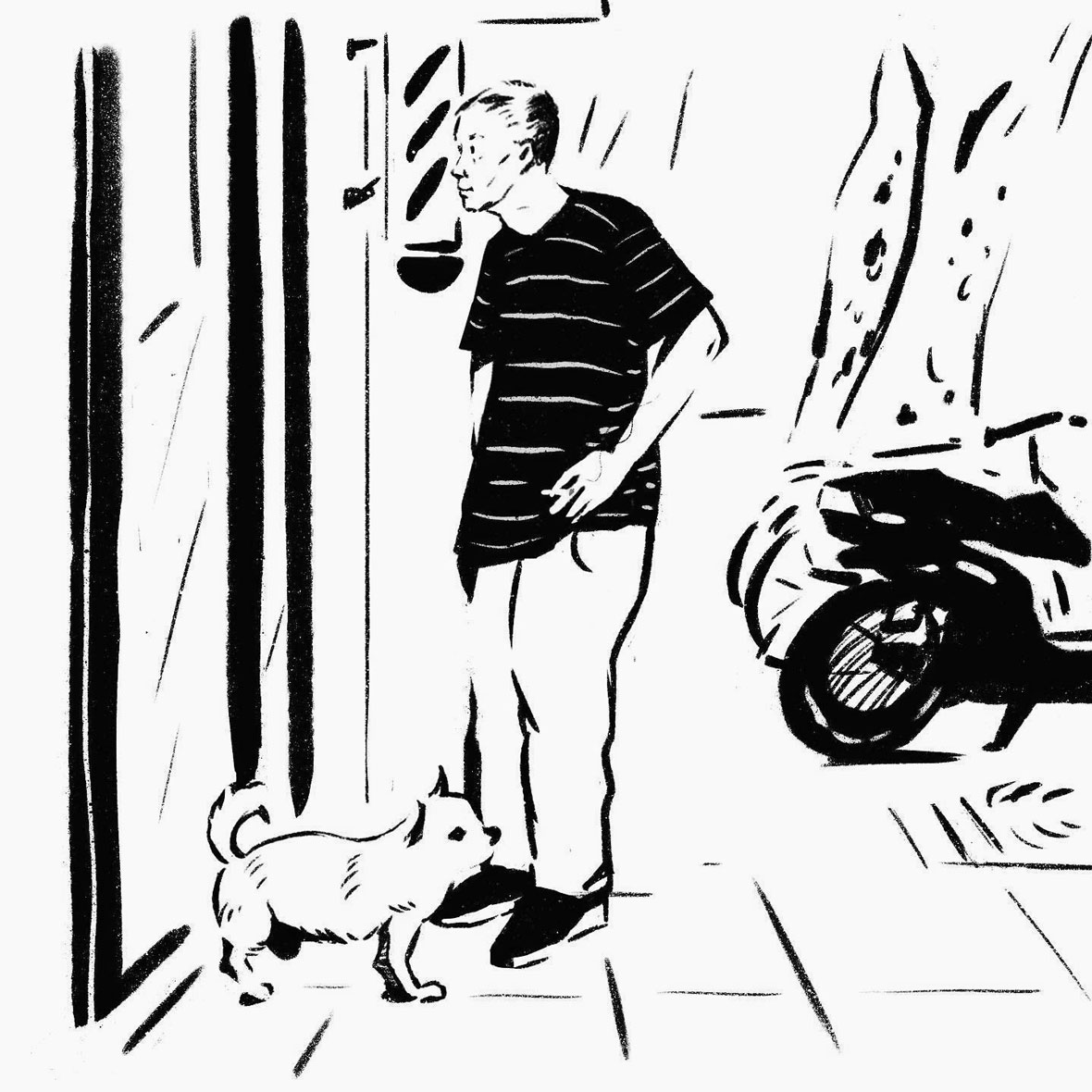 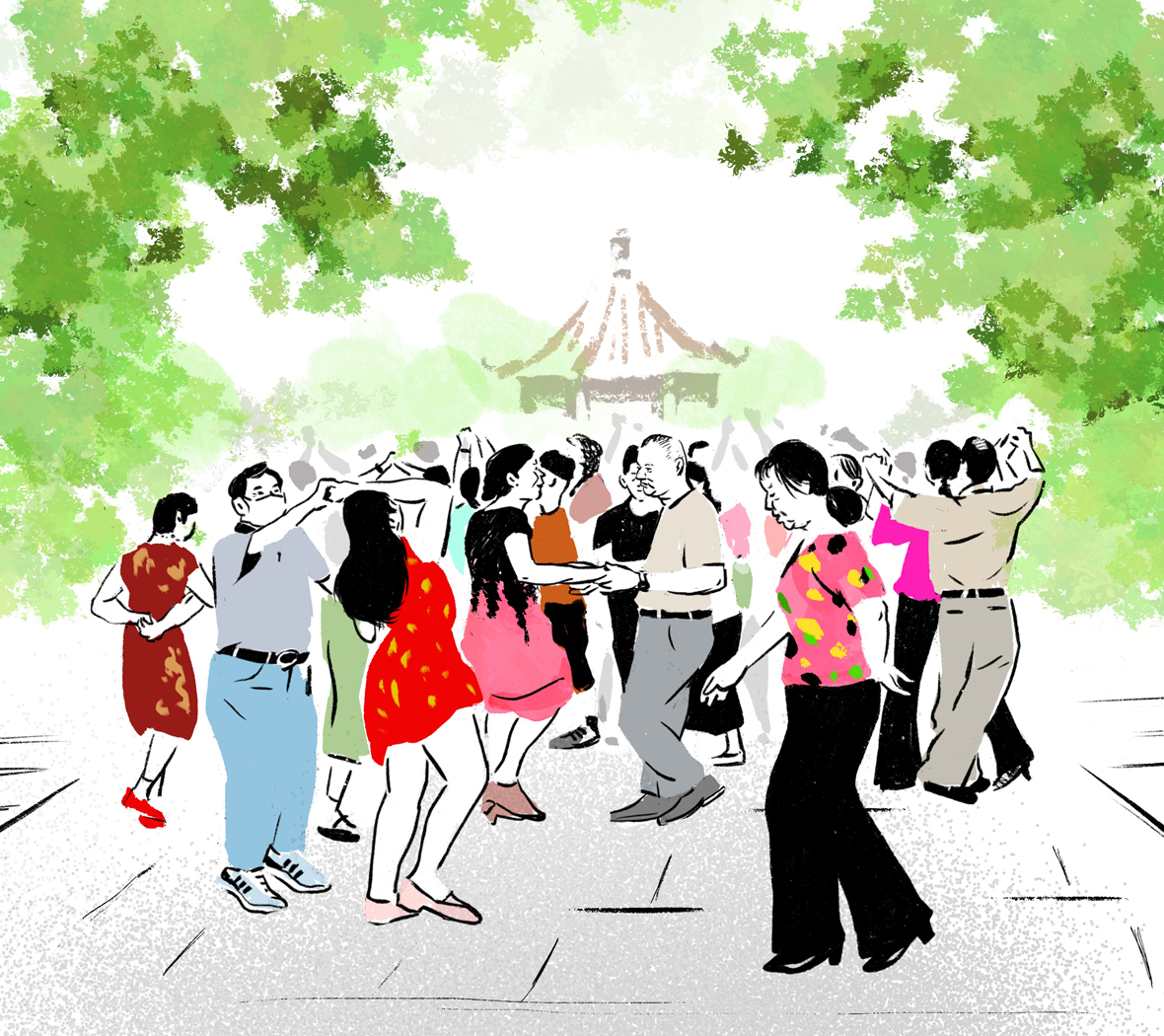 With Shanghai’s frenzied pace of development, the old ways of life have been cast out of sight, blotted out by the city’s skyward expansion. The southern districts of the city and Luwan district, areas that Peng are most familiar with, have largely changed over the years—though remnants of the city’s old essence still linger. As Shanghai continues to change and grow, Peng understands that the sense of community and human warmth he associates with the city will inevitably fade further away. However, he isn’t looking to his art as a way of waging battle against modernization—he simply wants to document the city and celebrate the little slices of Shanghai that remain blissfuly oblivious to the megalopolis’ unrelenting expansion. “I believe that people in Shanghai are very receptive to change,” he notes. “Even the older generations are willing to accept change, and they still remain curious to new things. They’re not shocked by modernization—they’re simply slowly digesting it.” 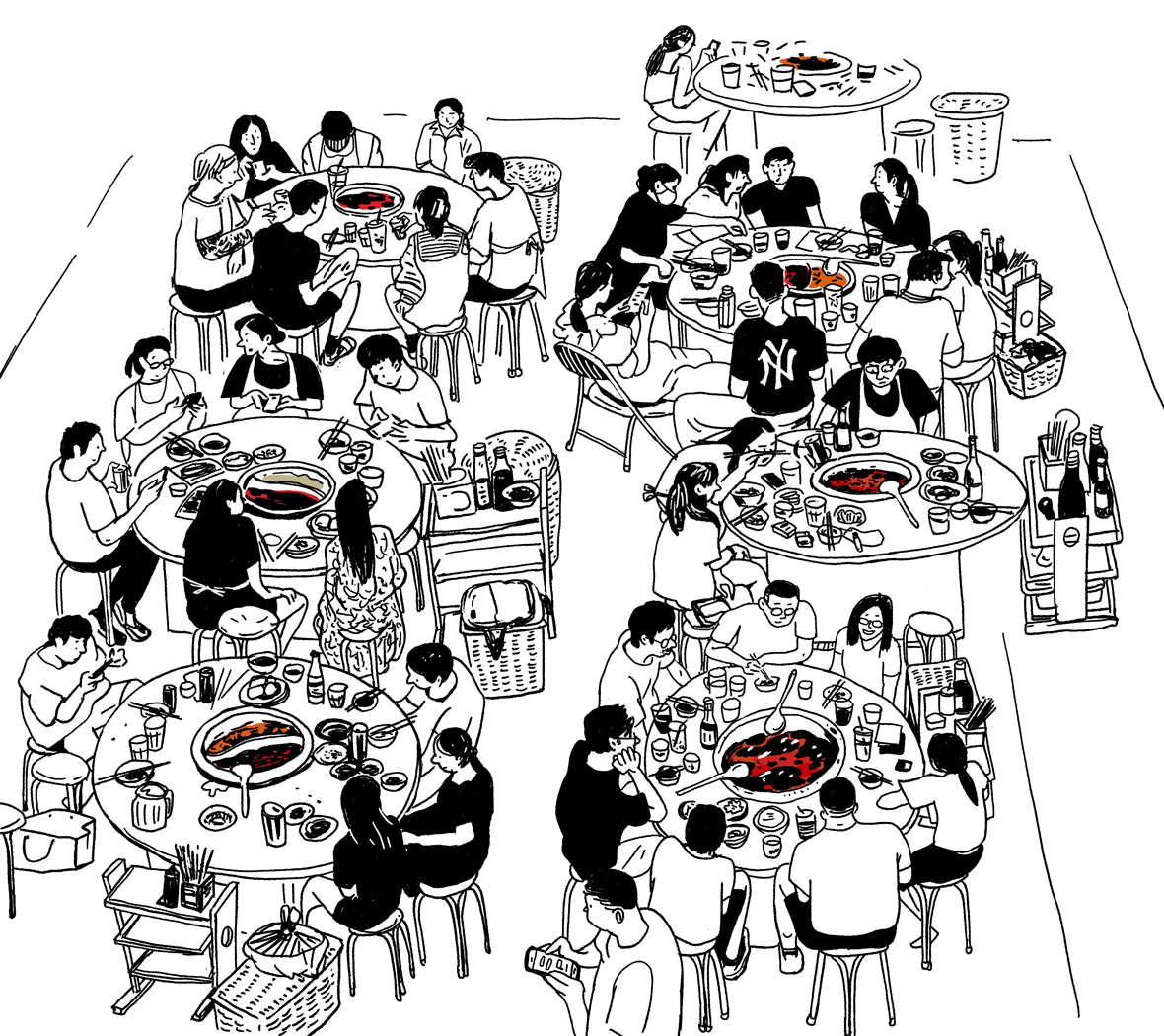 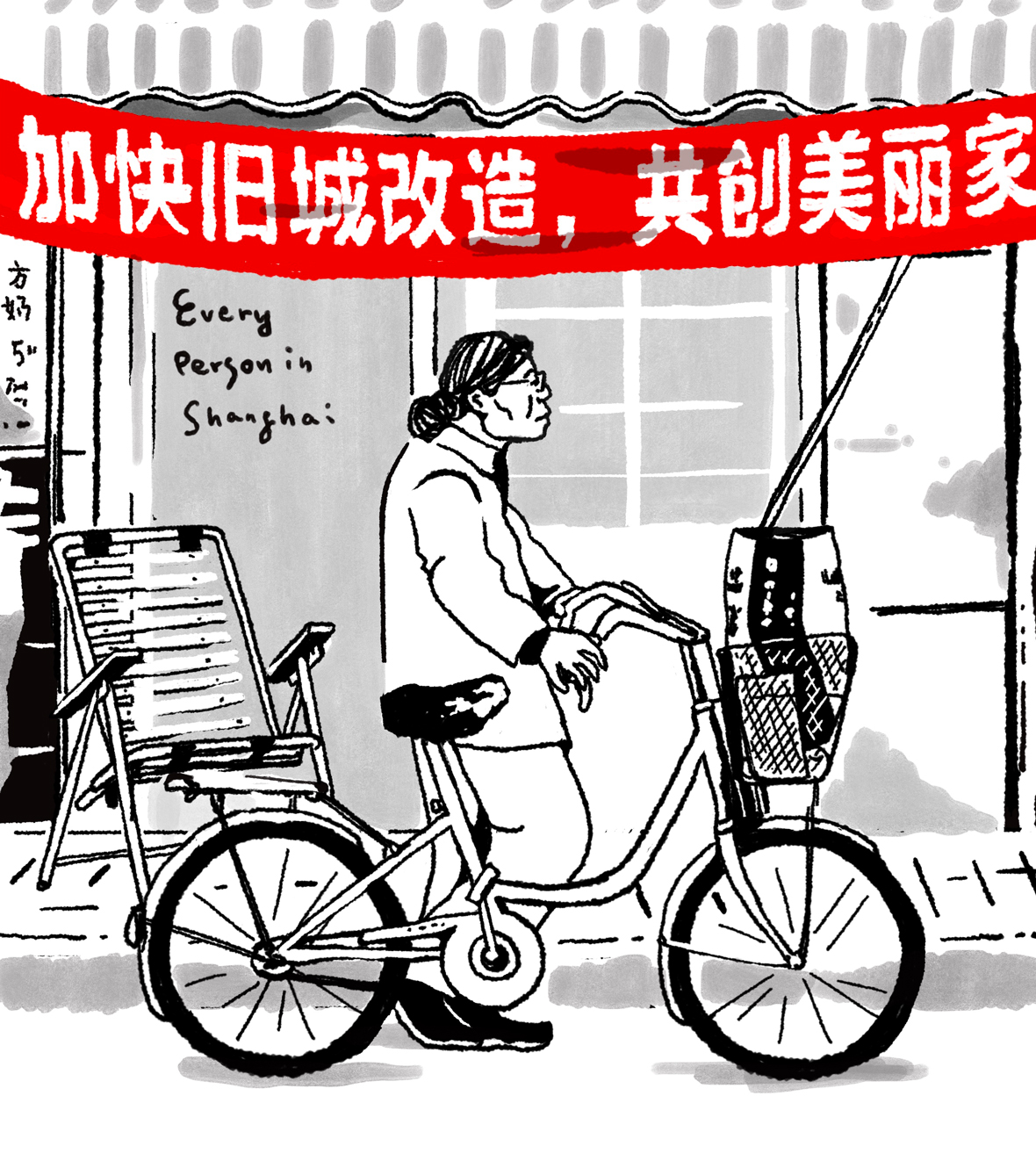 Peng is now a freelance designer and artist, and whenever he has time, he works on the series. His tribute project to Shanghai now consists of over 50 illustrations and continues to grow. He shares that he doesn’t have any concrete plans about where he wants the series to end up but simply hopes to continue sharing his love of the city through his work. Art has been a faithful companion during the lockdown, and with each completed piece, Peng has found comfort in knowing that there’s plenty more ordinary days to look forward to in the place he calls home.