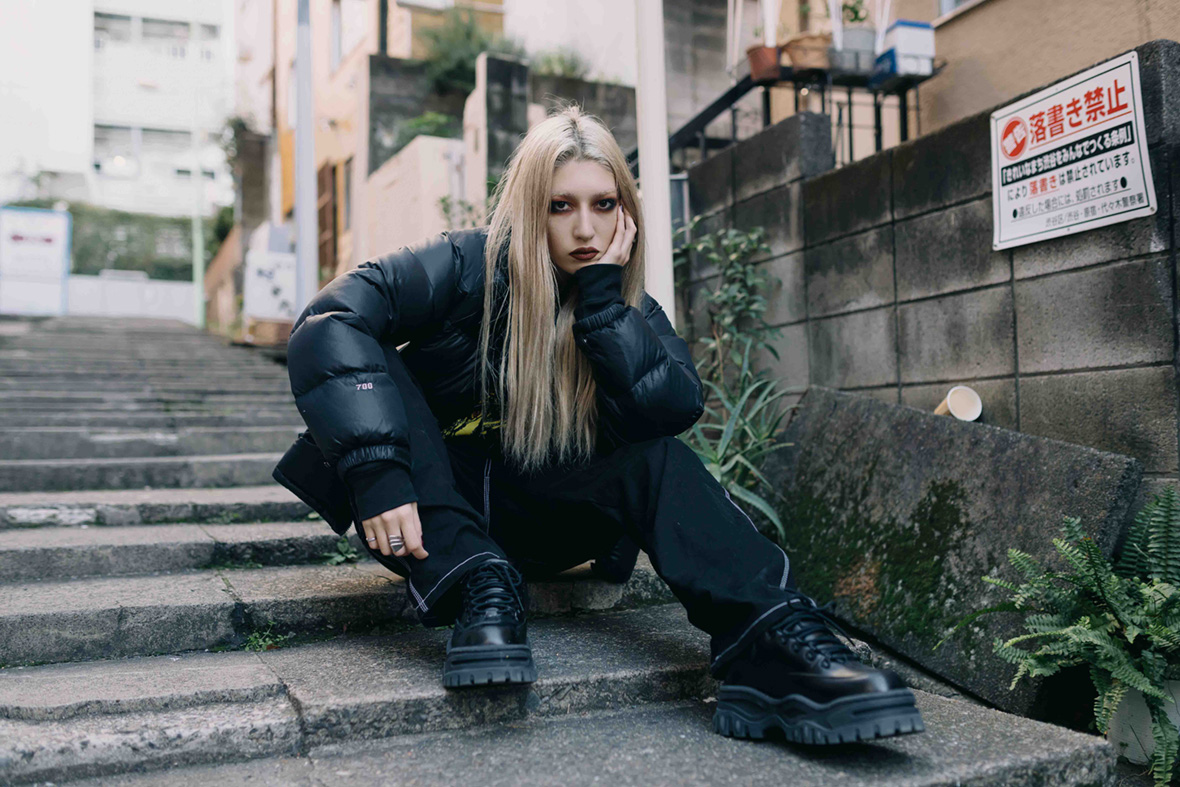 The end of the decade sees us firmly in a new golden era for music videos. Although they’re not the only way for musicians to blow up, having an engaging music video definitely gives artists an advantage in cutting through the noise. Japan’s Nina Utashiro is someone who clearly knows how to do just that. A newcomer to the rap scene, she has a solid resume in photography, fashion styling, writing, and creative direction. Under her Thirteen13 alias, she combines a dozen different ideas into her music videos, bringing horrorcore rap together with cinematic visuals, couture fashion, and a powerful sense of transgression. 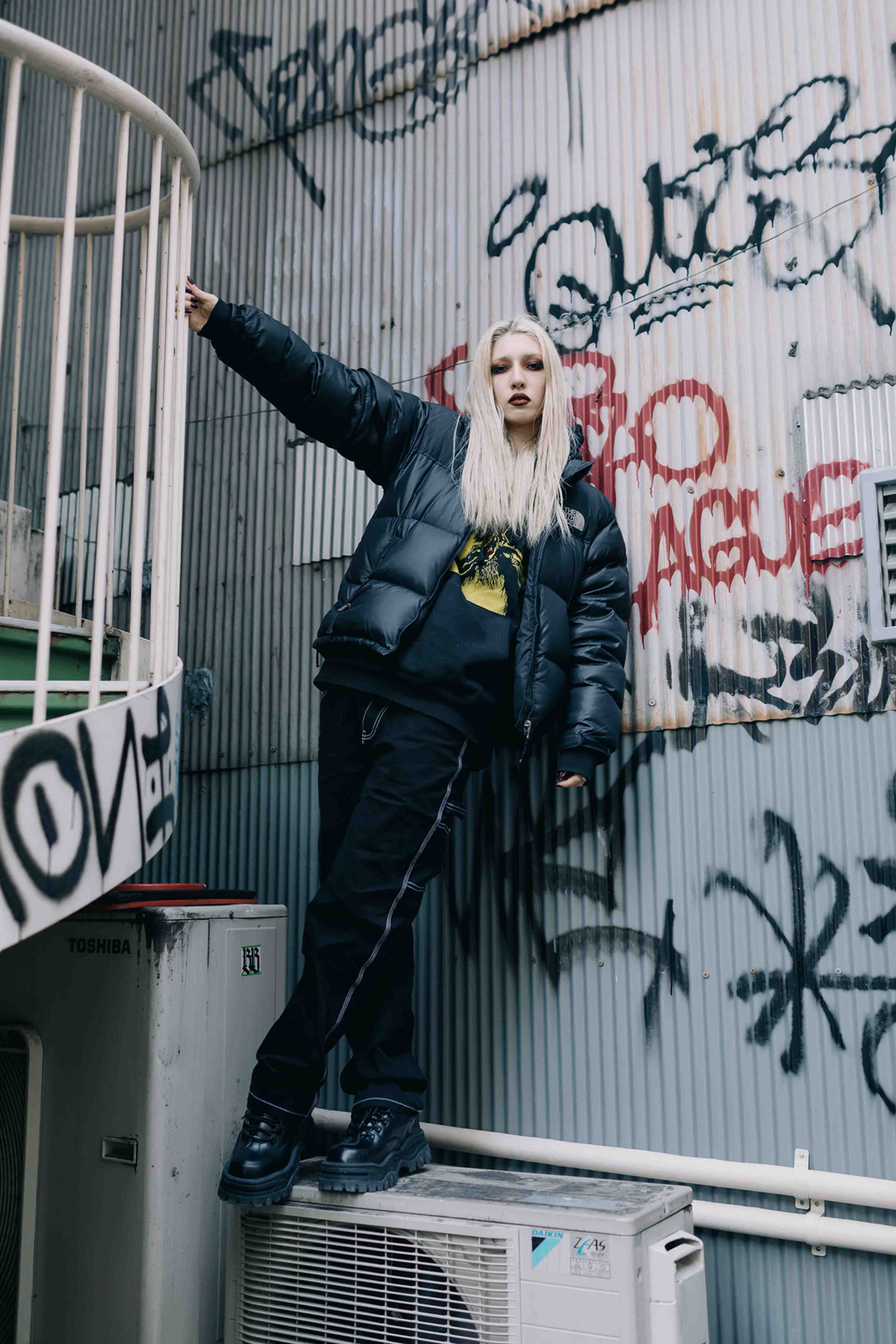 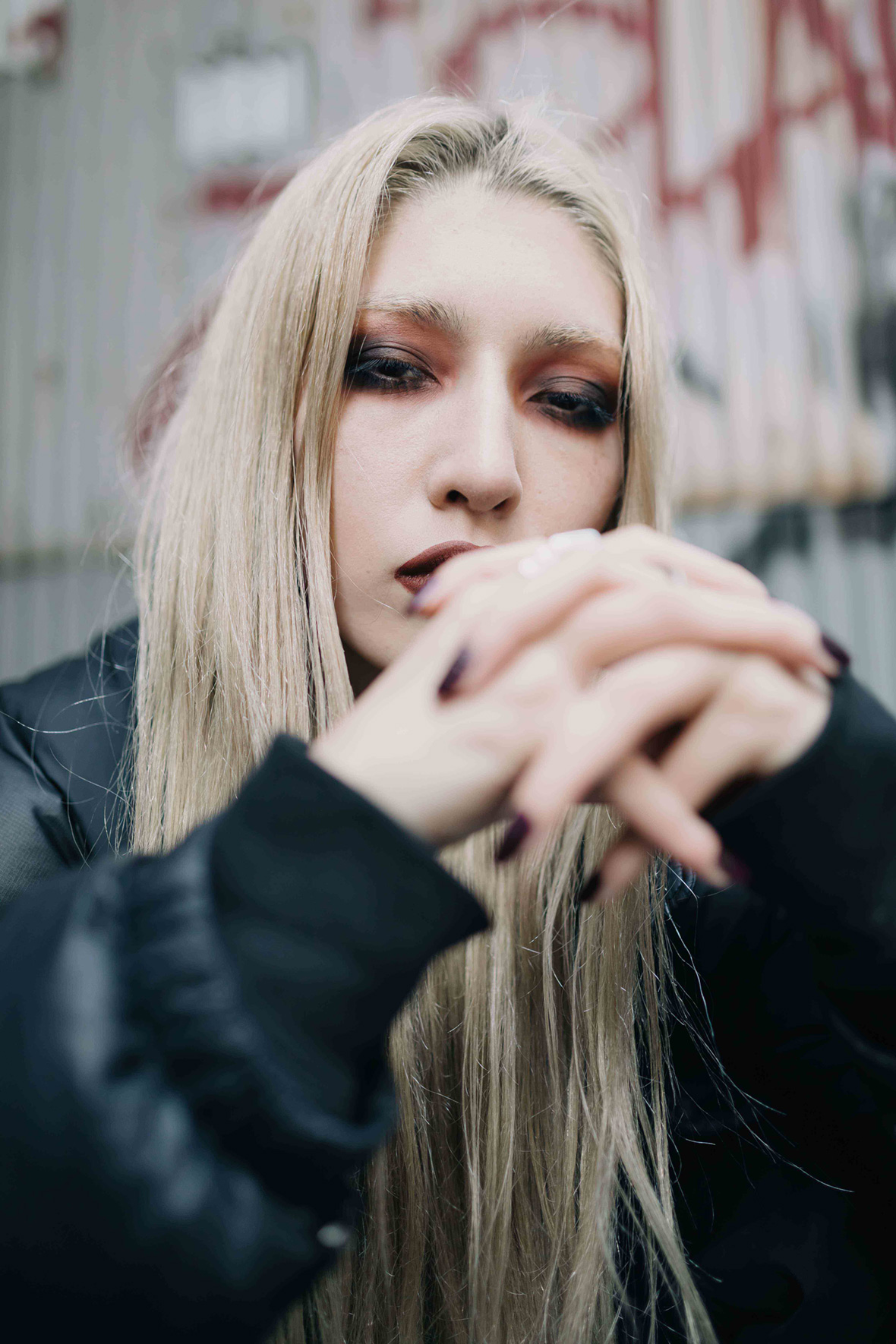 “Originally, the Thirteen13 project was going to be anonymous, but my background and look are clear advantages,” she says. Music videos have become her passion. “Sometimes the video concept even comes first and the music comes after,” she says. “I’m a very visual person, and creating the video is really my favorite part.” It’s made her realize that executing other people’s ideas isn’t fulfilling enough anymore. While she’d like to collaborate with others in the future, she wants full control now. 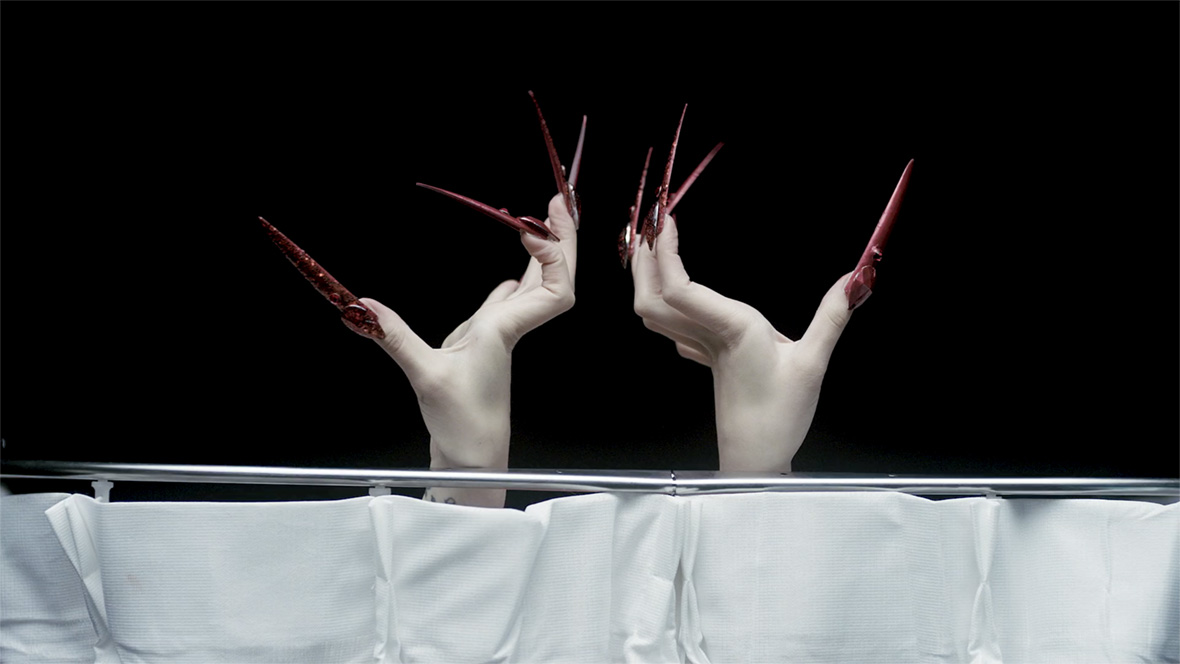 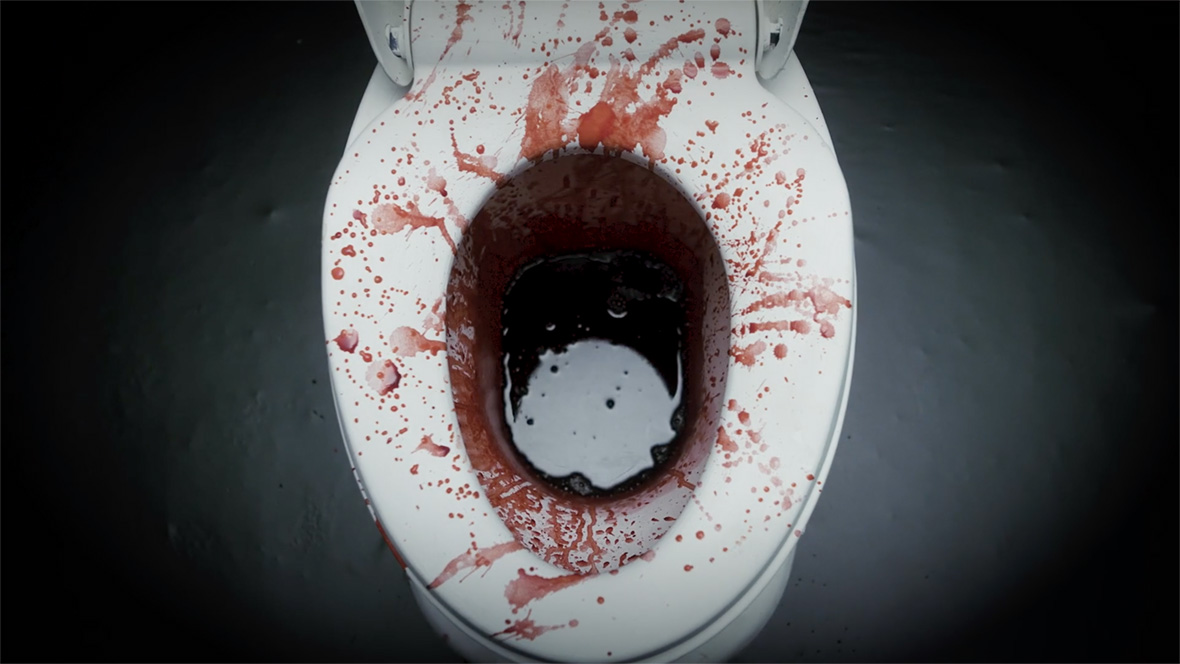 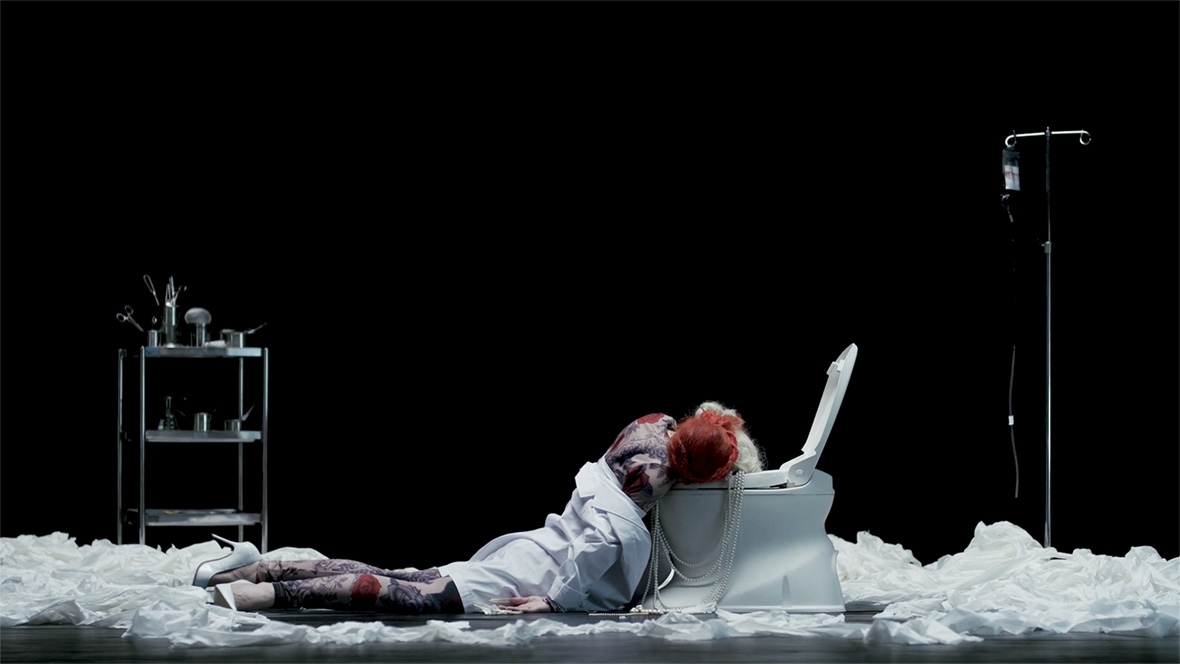 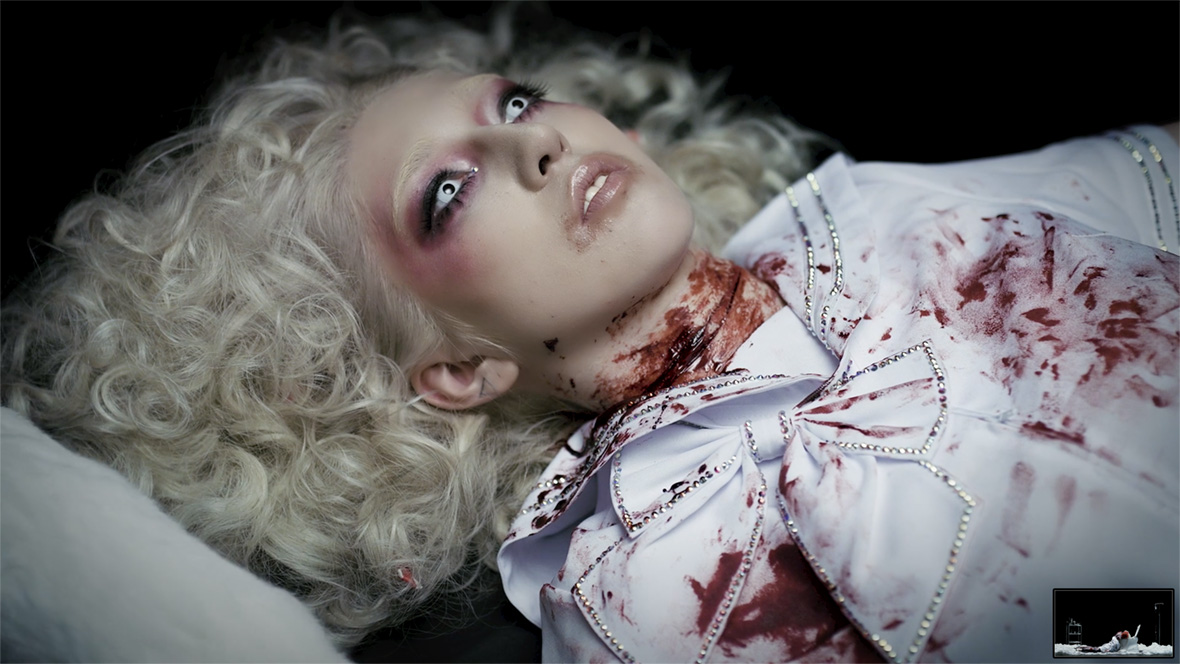 In her newest video “Omerta,” she plays with taboos, gleefully spilling secrets. It’s not quite a music video, and instead splices a couple of different segments of partial songs with faux interviews. The comical interviews are simply shot but highly stylized and filled with bright colors, while the music scenes are aggressive and dark. She raps in low ASMR tones over hardcore club music and rusty industrial beats while stark lighting casts heavy shadows on her costumes and sets.

In “Blood,” which is her most complete vision, Utashiro’s character is seen in a series of costumes, with repurposed high fashion outfits, intricate nails, and detailed set design. She takes vengeance on a collection of victims, which is reflected in the lyrics as well, where she lashes out at those who’ve taken advantage of her. 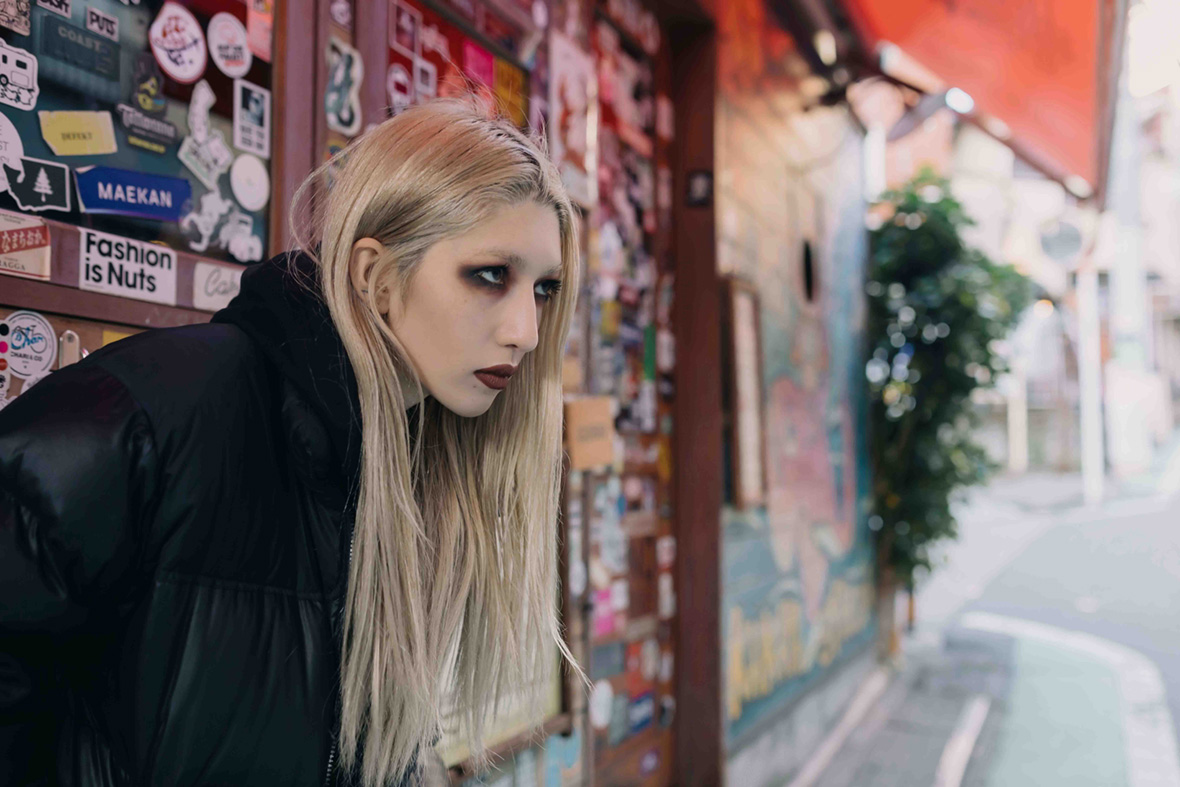 Her foray into rap hasn’t been without controversy. Some critics have dismissed her as an Instagrammer and told her to stick to fashion. “Otaku culture is big here in Japan, so it’s all about finding what you like and sticking to it. That’s never been what I do. I do a lot of things. But you can’t be behind the scenes as a rapper, so now my face is out there.”

Utashiro’s appearance has always stood out. As a German-Japanese kid growing up in Tokyo, it was impossible for her to forget she was unlike her peers. “Japan is extremely homogeneous. Everyone knew me because my name and face were different,” she says. “It’s not good or bad, but the concept of independence was given to me at a very young age. I was always very solitary.” 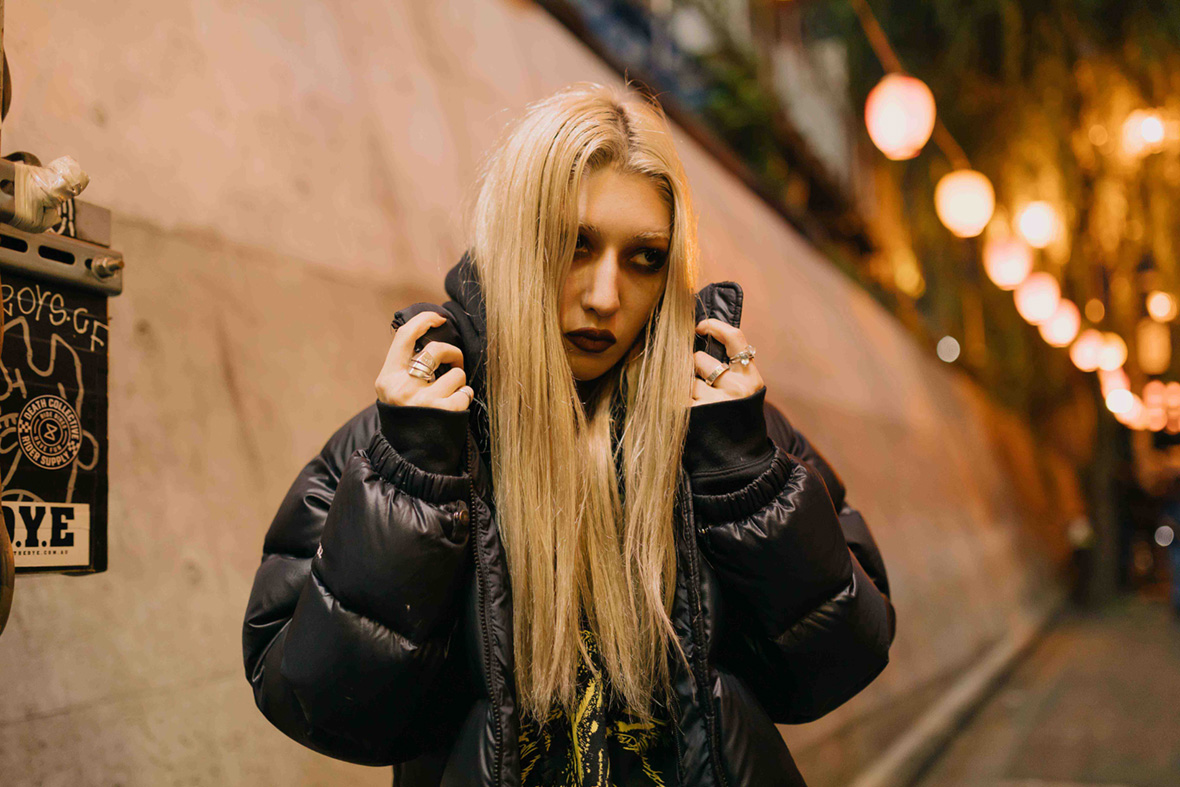 Listen to some of our favorite tracks from Thirteen13 below:

In middle school, she was drawn to metal, partly in opposition to the hypocrisy she saw in her father’s Catholic side of the family. “They were extremely intense, so I was rebellious towards them. My dad bordered on being a white supremacist. I was confused because he was married to my mom, a Japanese woman. I still don’t understand that. My mom was the polar opposite, accepting of everybody.” Always looking for the positive side of things, she says her father provided a model of what not to be. But she’s still lashing out at them, and the metal influence remains a part of her life. Her Thirteen13 persona is demonic and purposely antagonistic towards the church.

After her parents divorced, Utashiro moved with her mother to Manhattan, where she went to public high school at 16. It was life-changing. “My school was mainly black, Latino, and Chinese. I didn’t understand poverty, I had never seen drugs. I’d never experienced diversity,” she recalls. “In New York, there’s this level of respect for different cultures that doesn’t exist in Japan. But I got myself in trouble at school. Everyone was saying the n-word to each other and I didn’t know where it came from. I said it and my friends were like, ‘Look bitch, you can’t say that word.’ It was one of the best and hardest experiences of my life.” New York was also were she fell in love with hip hop, a constant in her ever-evolving creative identity. She graduated high school early and quickly went on to study at Columbia University where she began her exploration of fashion. 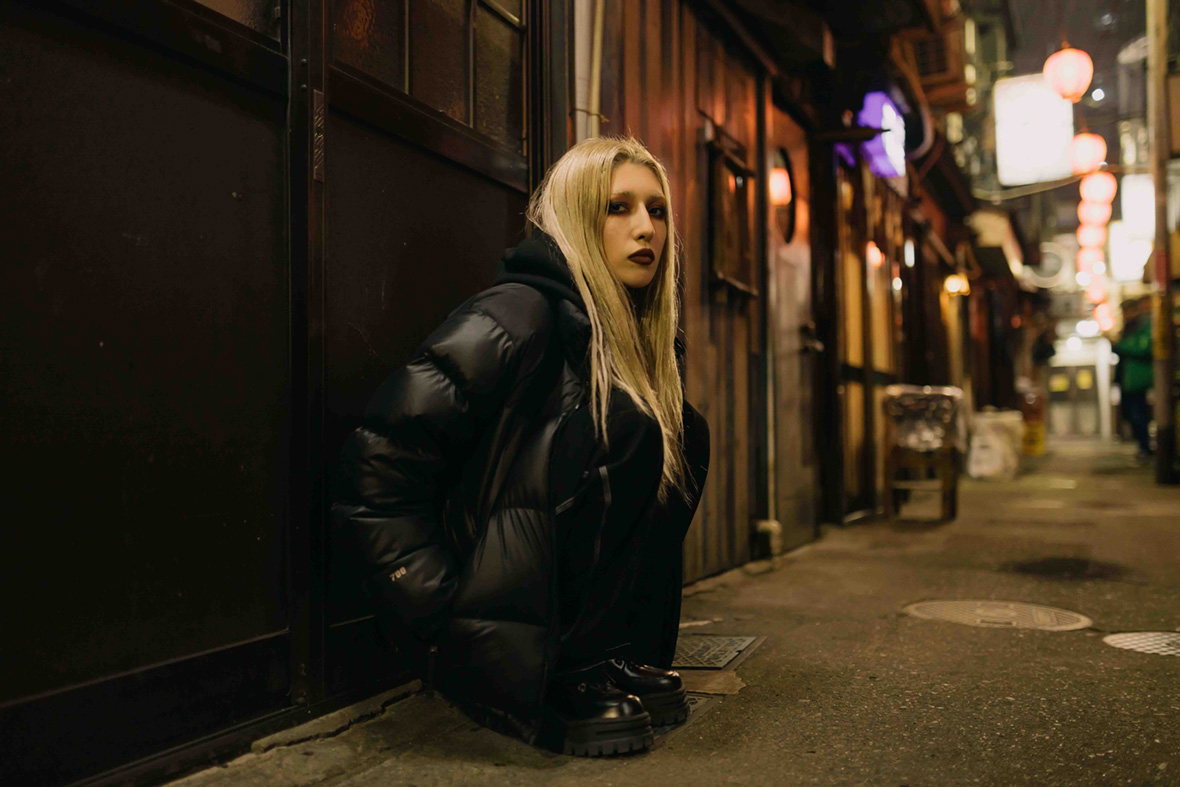 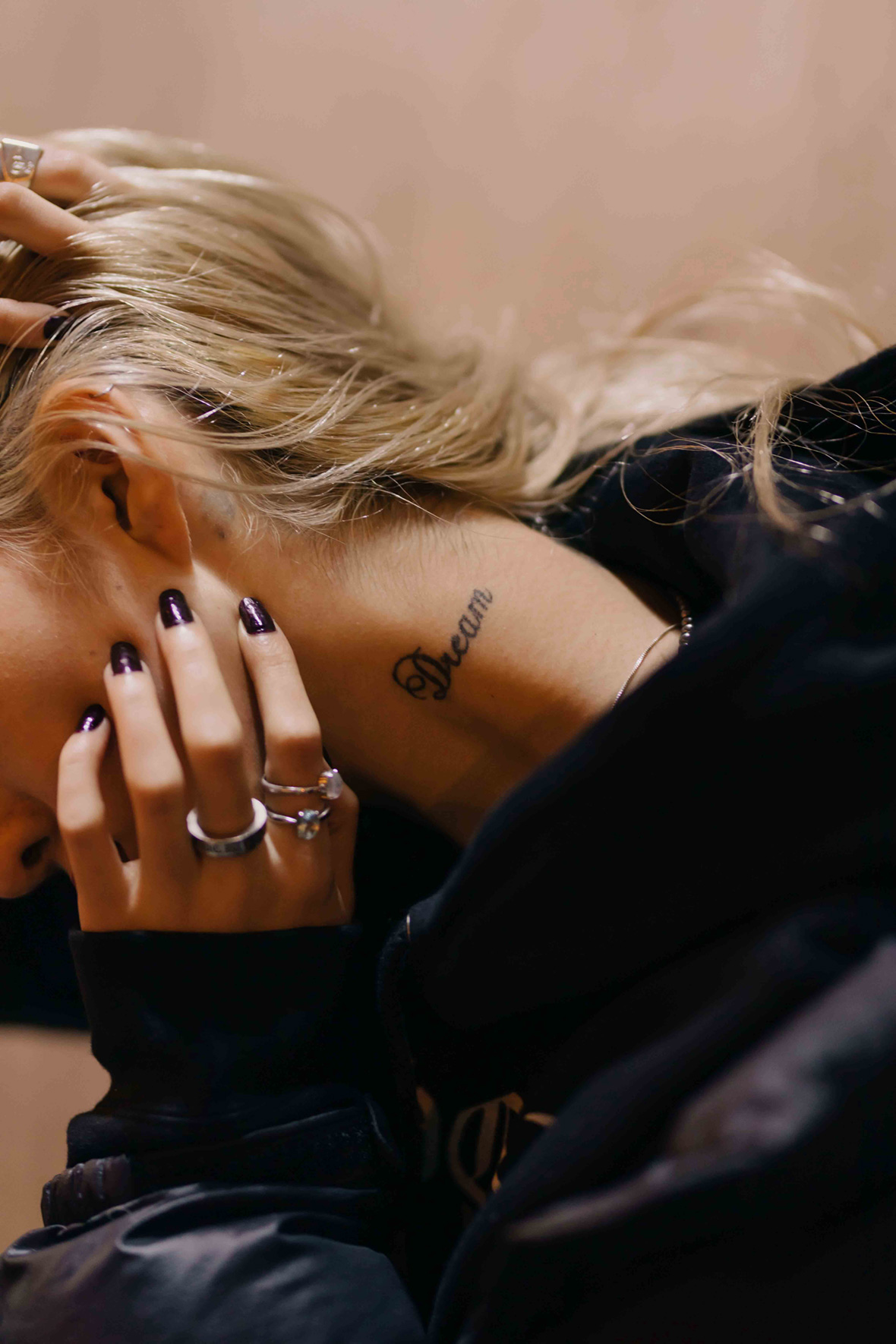 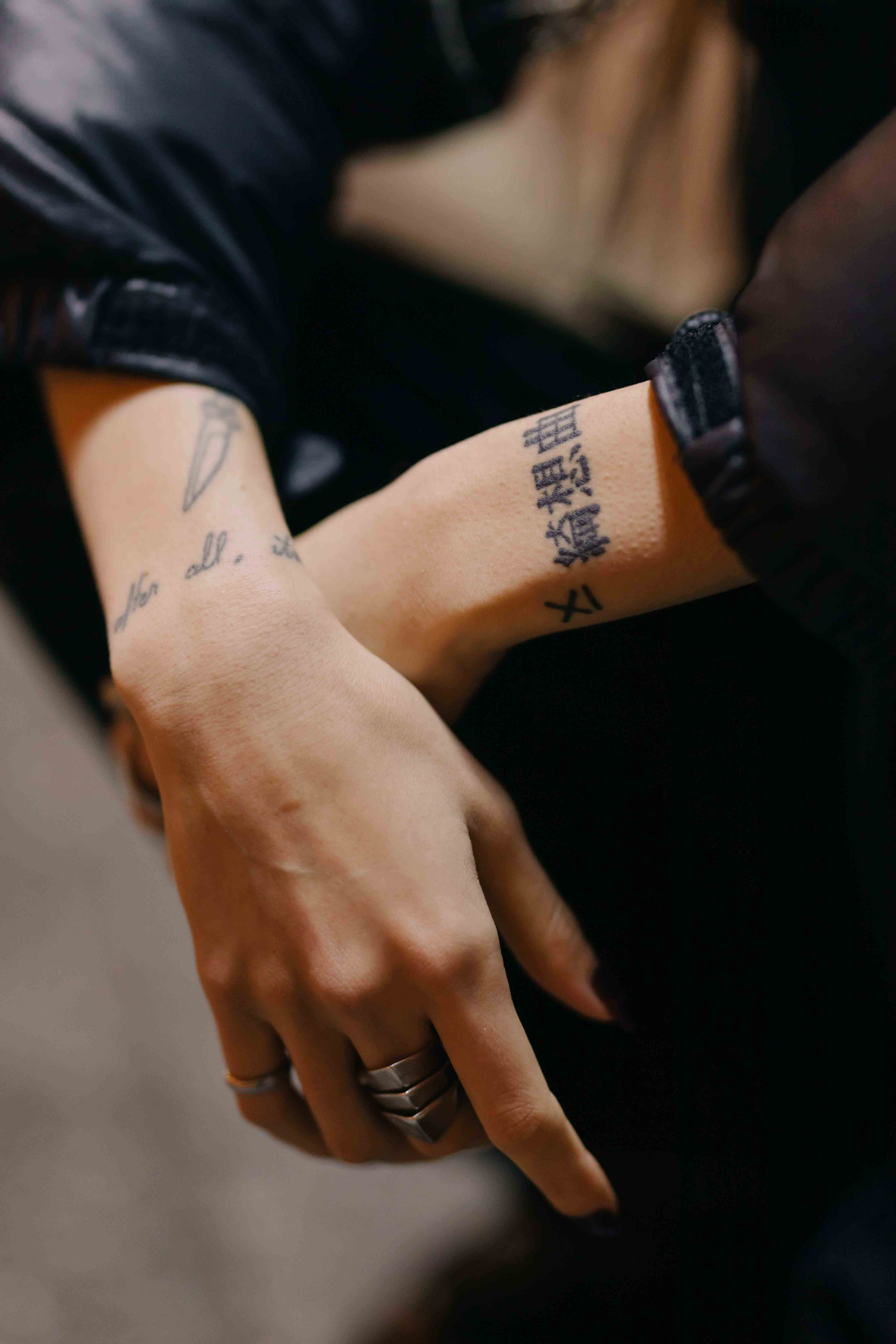 Utashiro believes her multiethnic background gives her an advantage, even if some people don’t know what to make of her. In Tokyo, where she returned at age 21, her heritage and style are misunderstood. “People think I have sex a lot. There’s a lot of slut shaming here,” she says. Her style is very sexually forward, and she’s unashamed of it. It’s a direct challenge to conventional gender roles in Japan, but it’s not a political move, she just does as she feels. “In all honesty, I’m a little selfish. I’m not trying to change anyone’s mind. But if they do, that’s cute too.”

In the end, she doesn’t care what anyone thinks. “I should be more considerate of my audience but I’m not saying anything for them, it’s for me. Because I need to get it out. The people I’ve always looked up to are living their true selves, doing purely what they enjoy.” 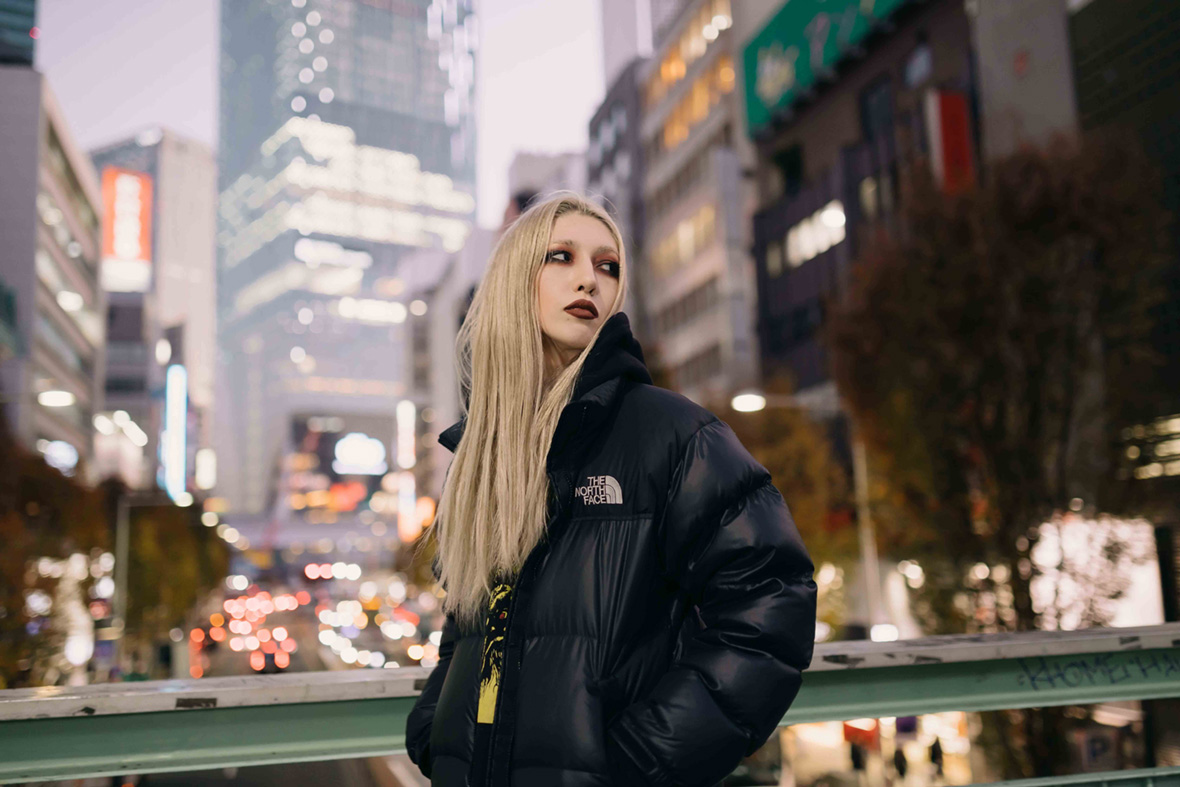