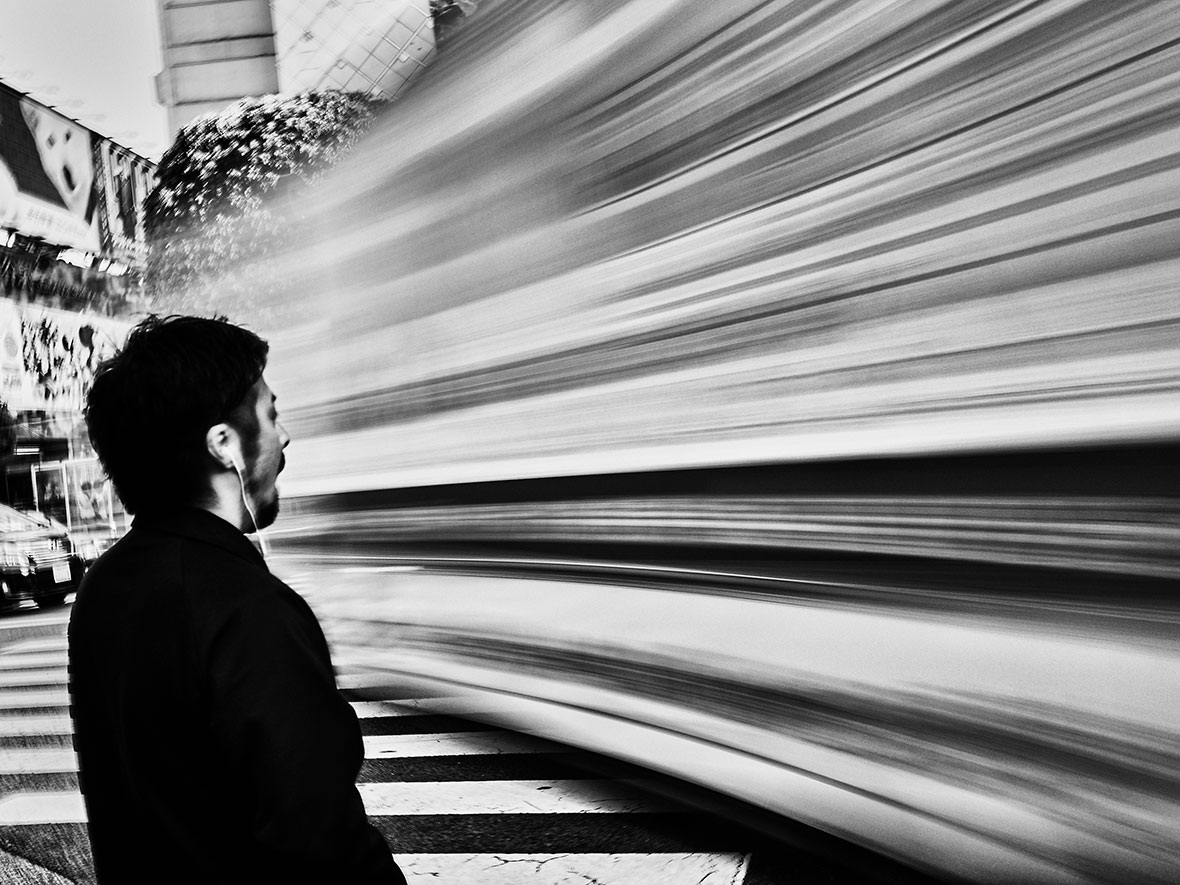 A bus screams past a pedestrian in a blur of white and black lines. As it turns into an intersection, its hovering lines cut across the blocky lines of a crosswalk, seemingly creating a new dimension. Meanwhile, the man simply yawns, wholly unimpressed, his shadowy profile jumping out starkly from the white lines swirling around him. This is the work of Shinya Kawaoto, a portrait-focused street photographer from Japan who shoots exclusively in black and white. 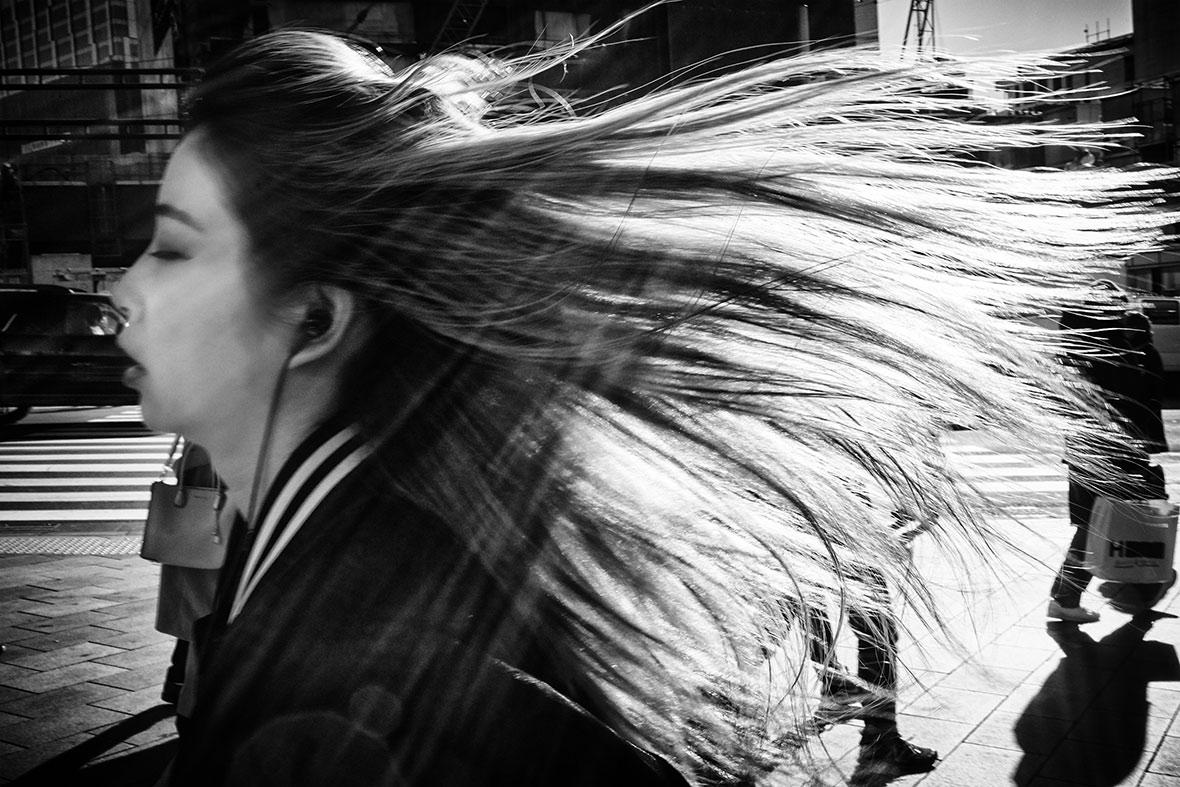 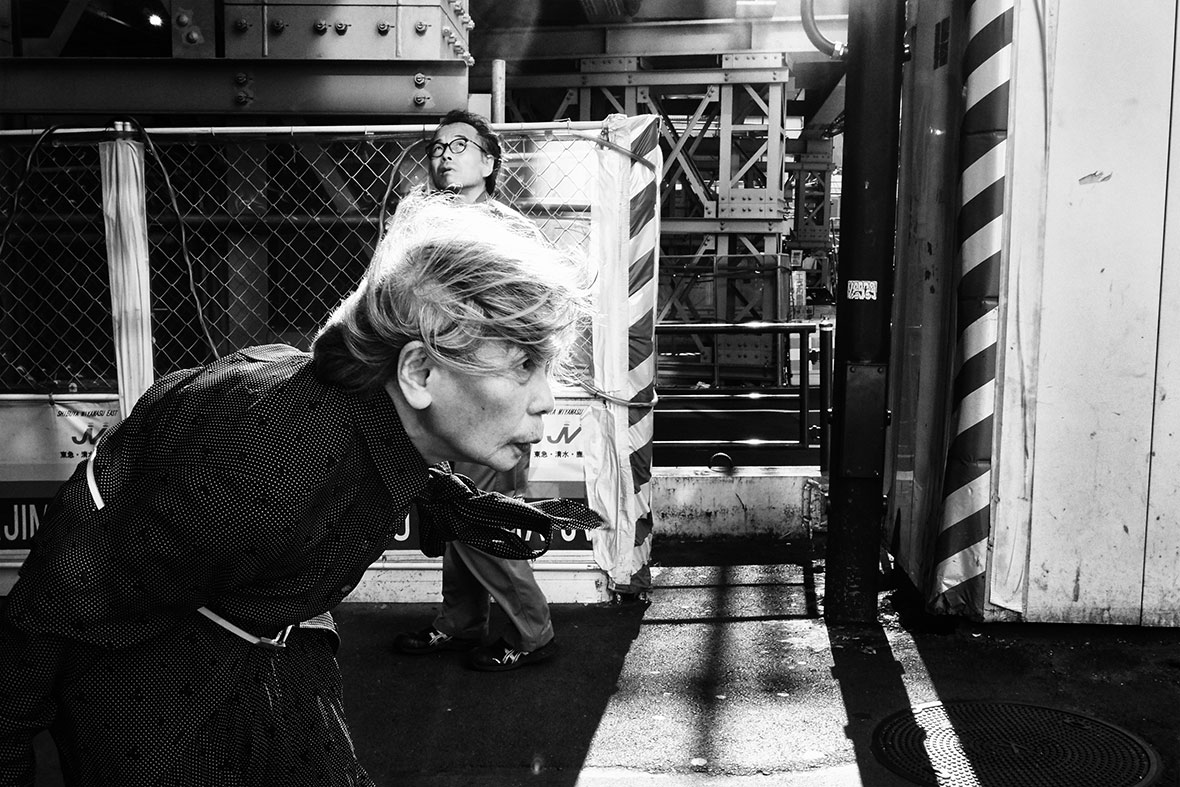 The sense of contrast—present in both his interplay of shadow and highlights as well as the characters that seem out of place in the settings—is a prominent feature of Kawaoto’s photography. It’s buttressed by a steadfast attention to energy, the creation of surreal settings, and puzzle-like compositions. His subjects display poignant and deeply personal feelings at emphatic moments, and the silvery glint of blacks, whites, and grays shine like precious metals. 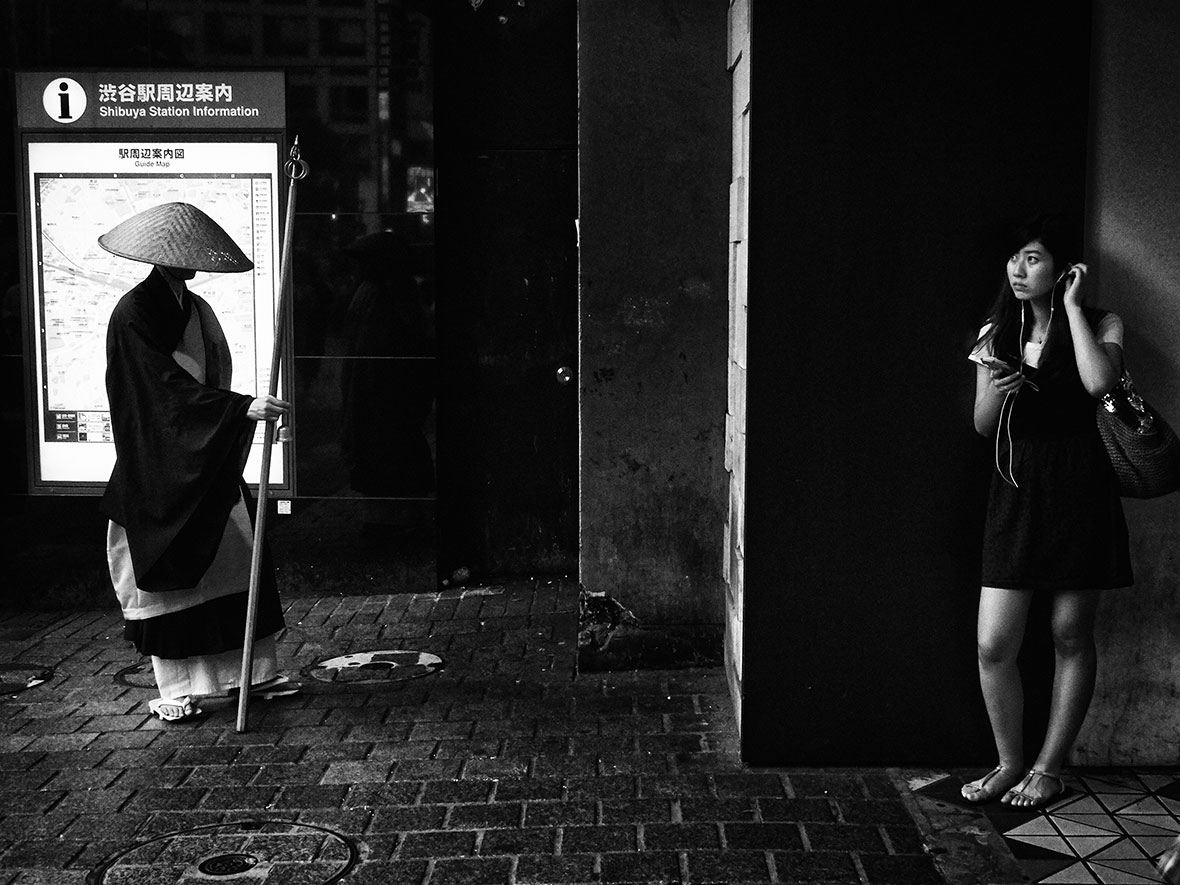 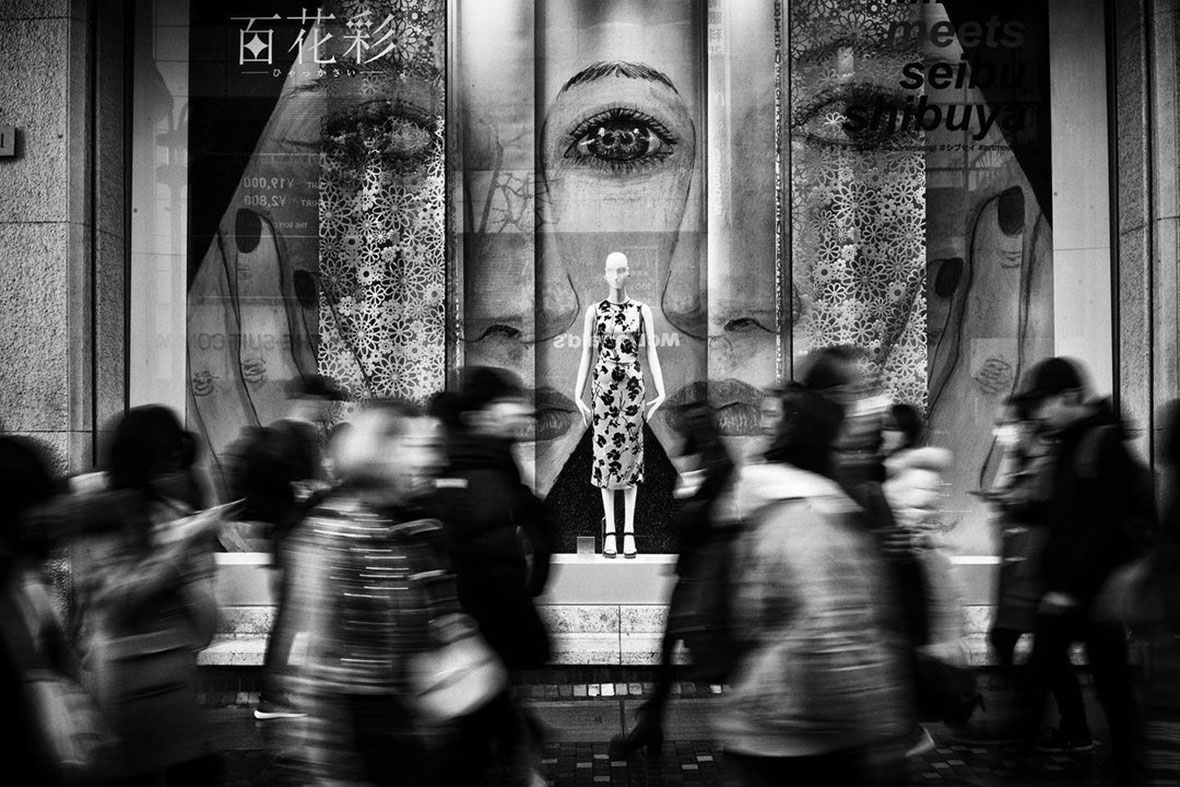 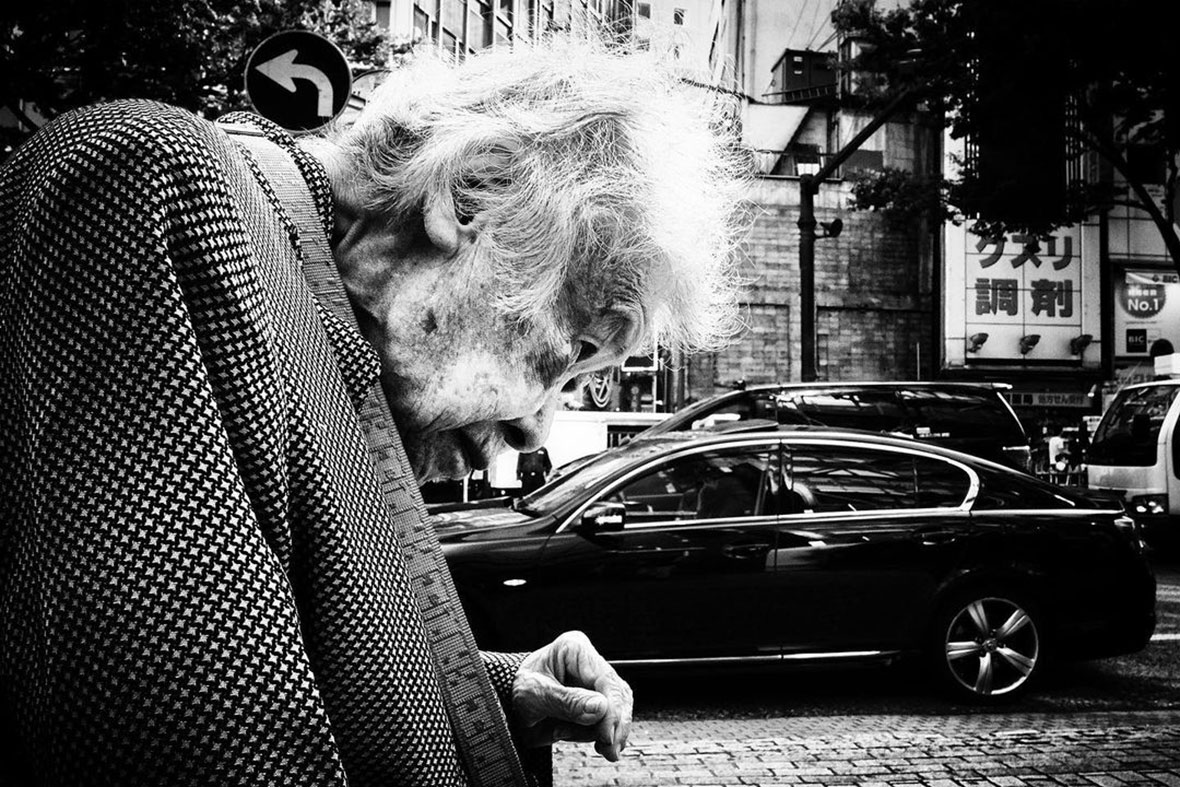 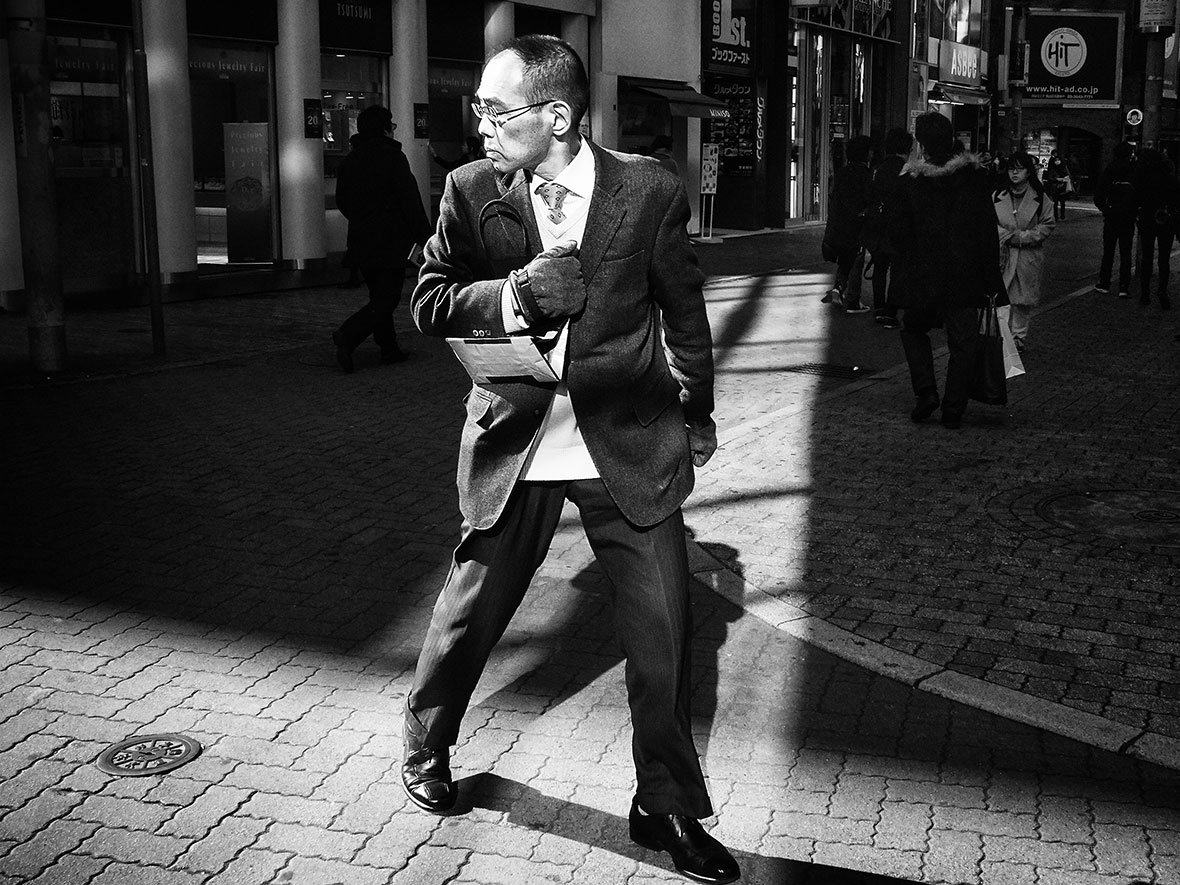 Kawaoto is invested in people, especially their faces. Whether they’re elderly or adolescents, tourists or businessmen, he likes to get right up close, his camera right under their nose, their profile jutting sharply out from their settings. He forgoes the use of color to tame the noise of the busy Tokyo streets, famous for their kinetic lights and flashing signs. This funnels the viewer’s eyes straight towards his subjects. But the city is always present, patiently waiting in the background to be discovered, confident it won’t be forgotten. It’s a supporting cast member; secondary but important.

Taking photographs of strangers can be a tricky thing. But he says people in Tokyo are generally very shy and don’t complain, while tourists are usually fine with being photographed if asked. “I’ve been warned by people to delete my pictures, but it’s never escalated to the point of an argument,” he laughs. “When I tell them the purpose of my pictures, they usually agree to the shot.” 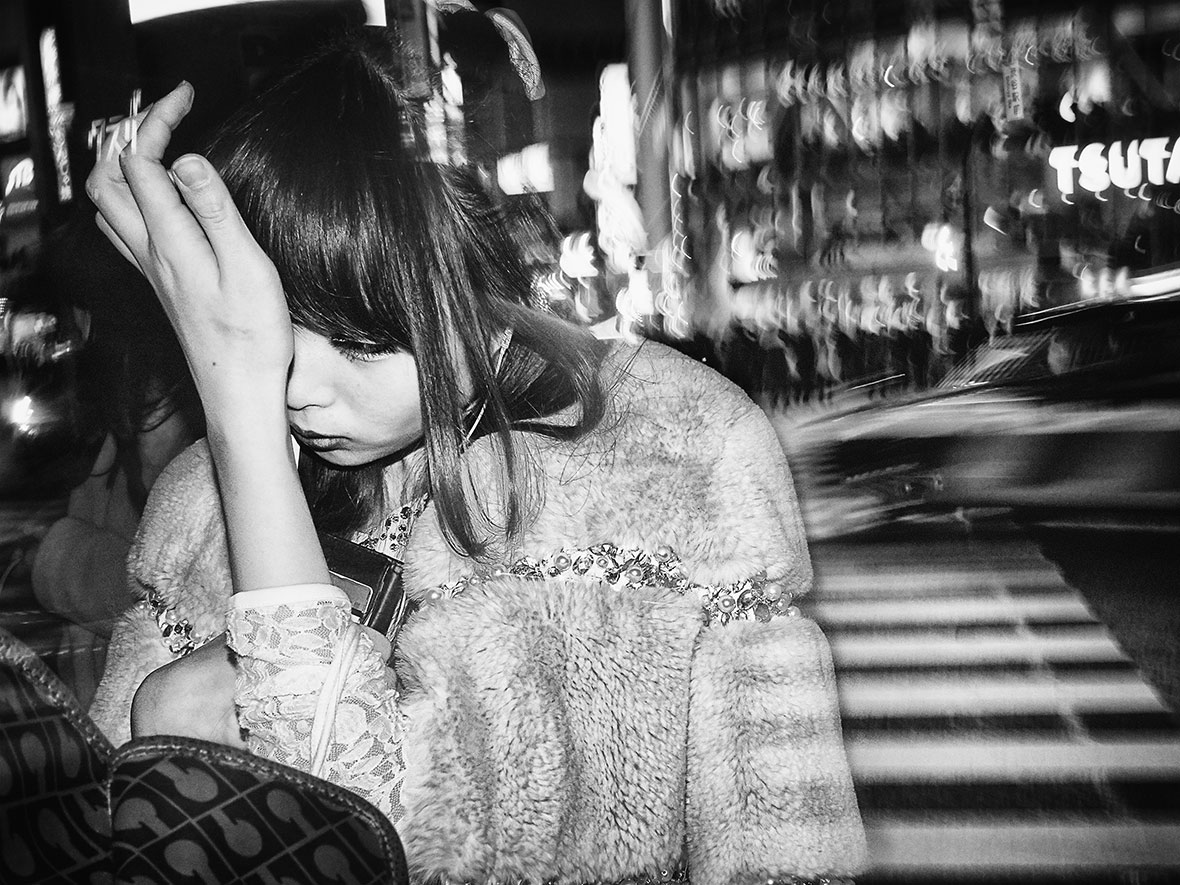 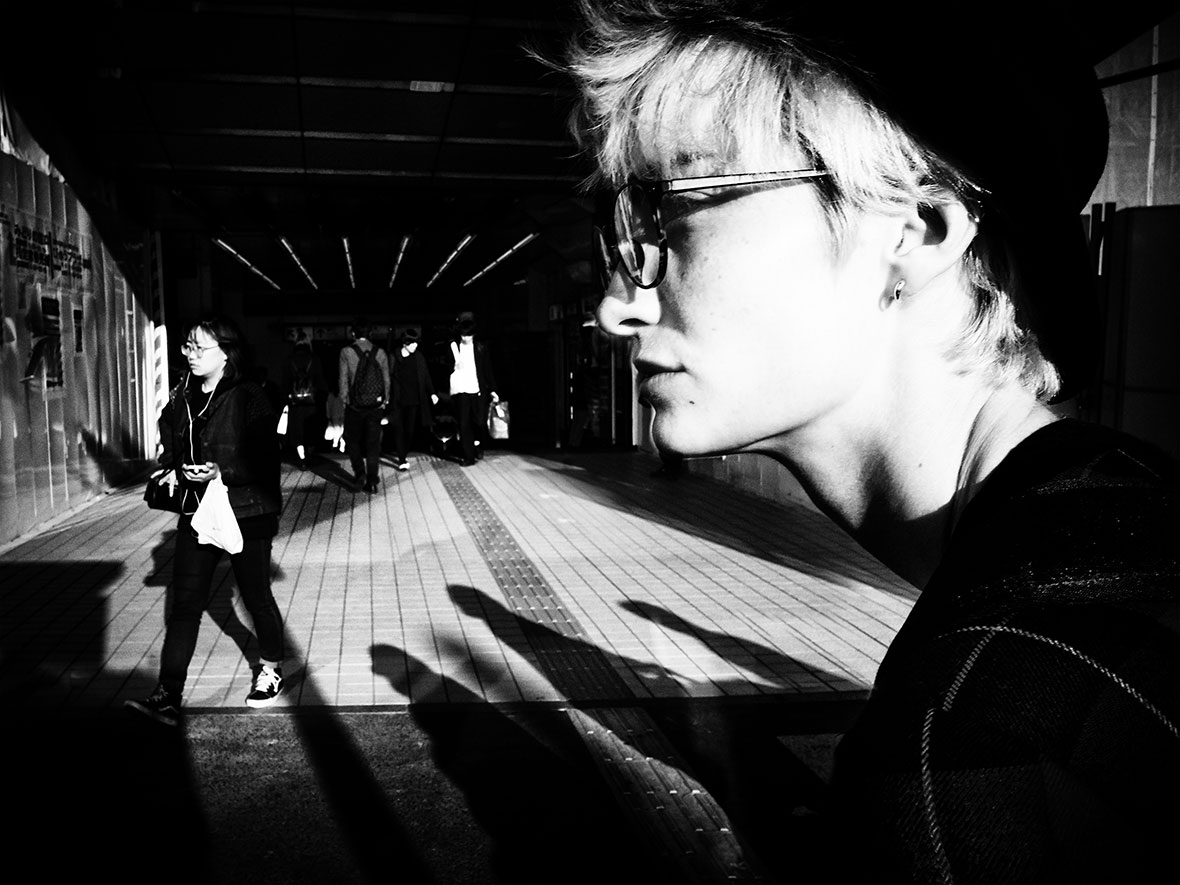 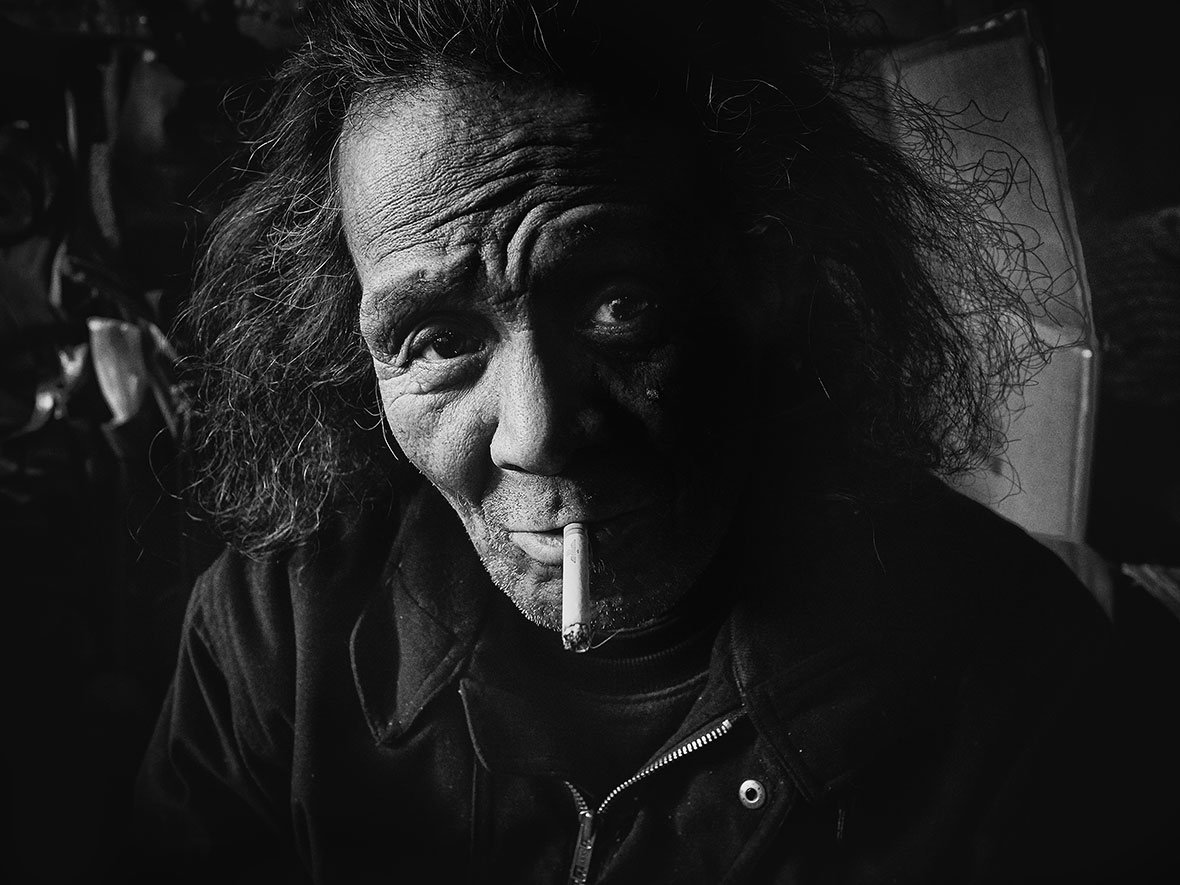 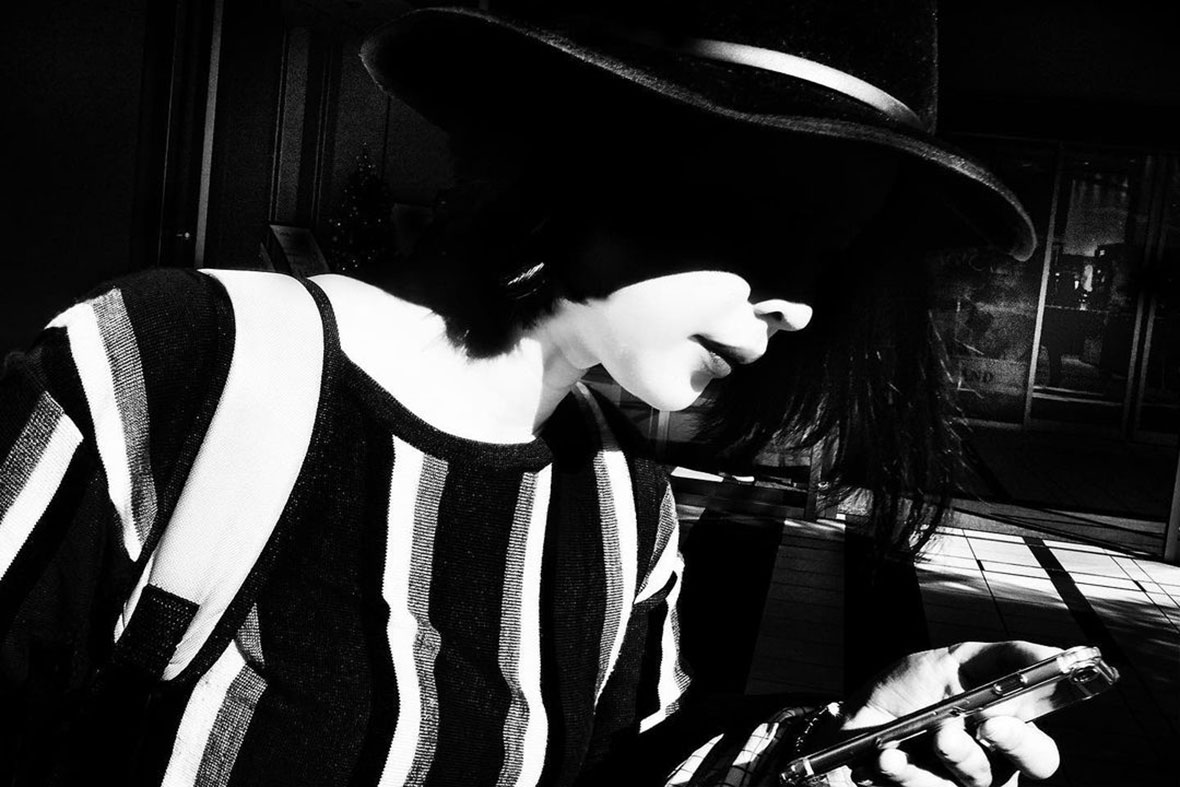 Kawaoto, who’s lived in Tokyo for the last 20 years, started shooting portraits as a hobby for a change of pace from his routine days working in the IT field. One day he took his camera out to Shibuya on a whim and fell in love with the charm of the city when viewed through the lens. “Street photography is a record of the city,” he says. “Tokyo is constantly changing I think it’s important to document this in my photographs.” He paired that with his interest in portraits, positioning people in candid postures as his focal point. “These people are part of the city, they make it what it is.” 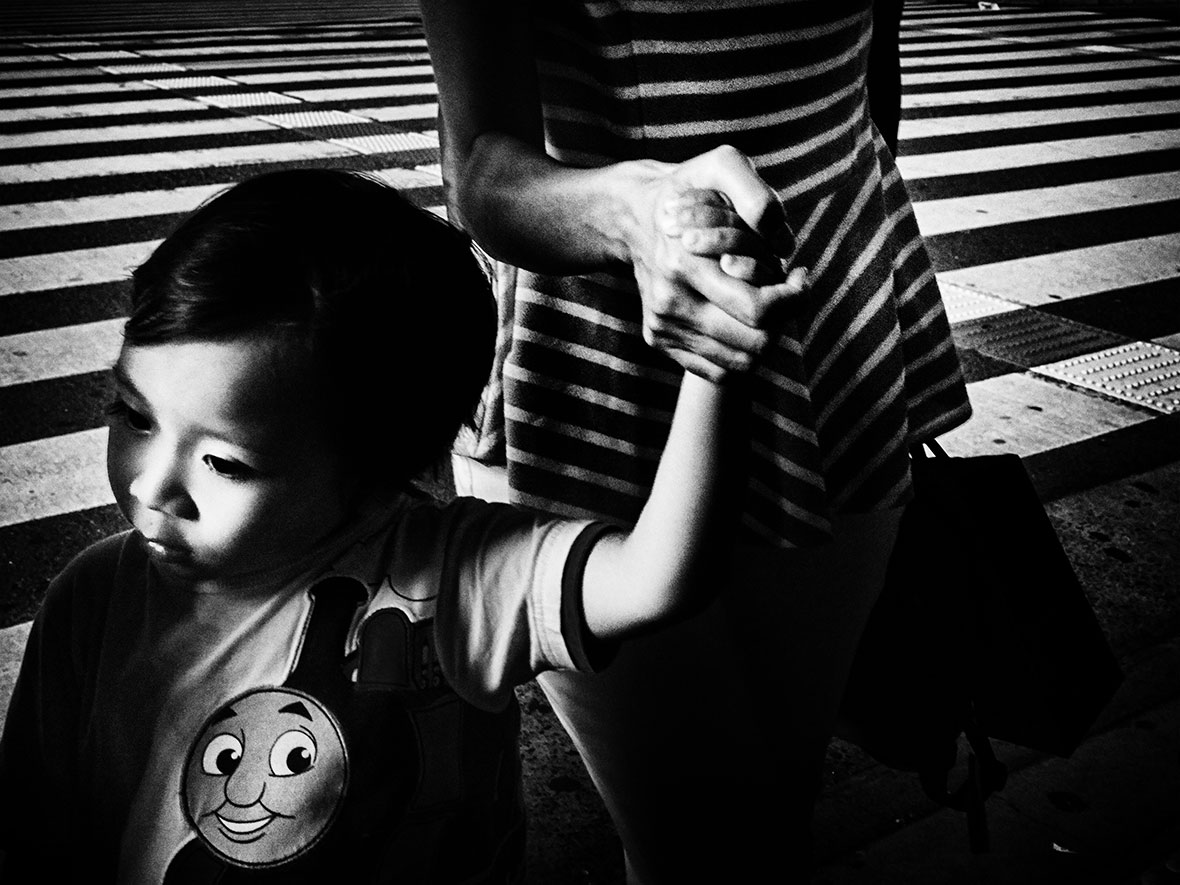 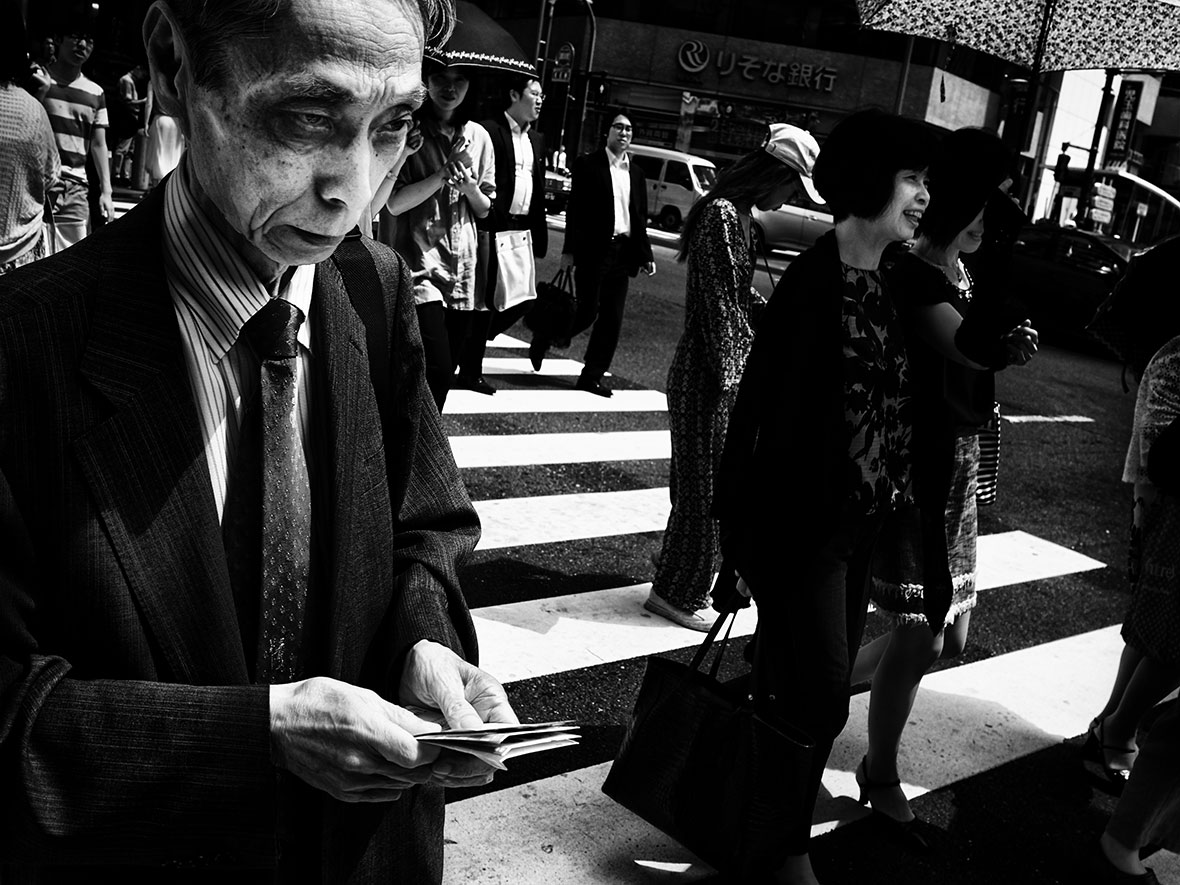 Everything in the frame is kept in focus by setting the aperture for a wide depth of field. This way, a background of sun-soaked tarmac and bright smiles can contrast better with the sickly, elderly man in the foreground. Or it captures the isolation of a little girl waiting alone at a broad intersection, totally separated from the distant crowd on the opposite side of the road. 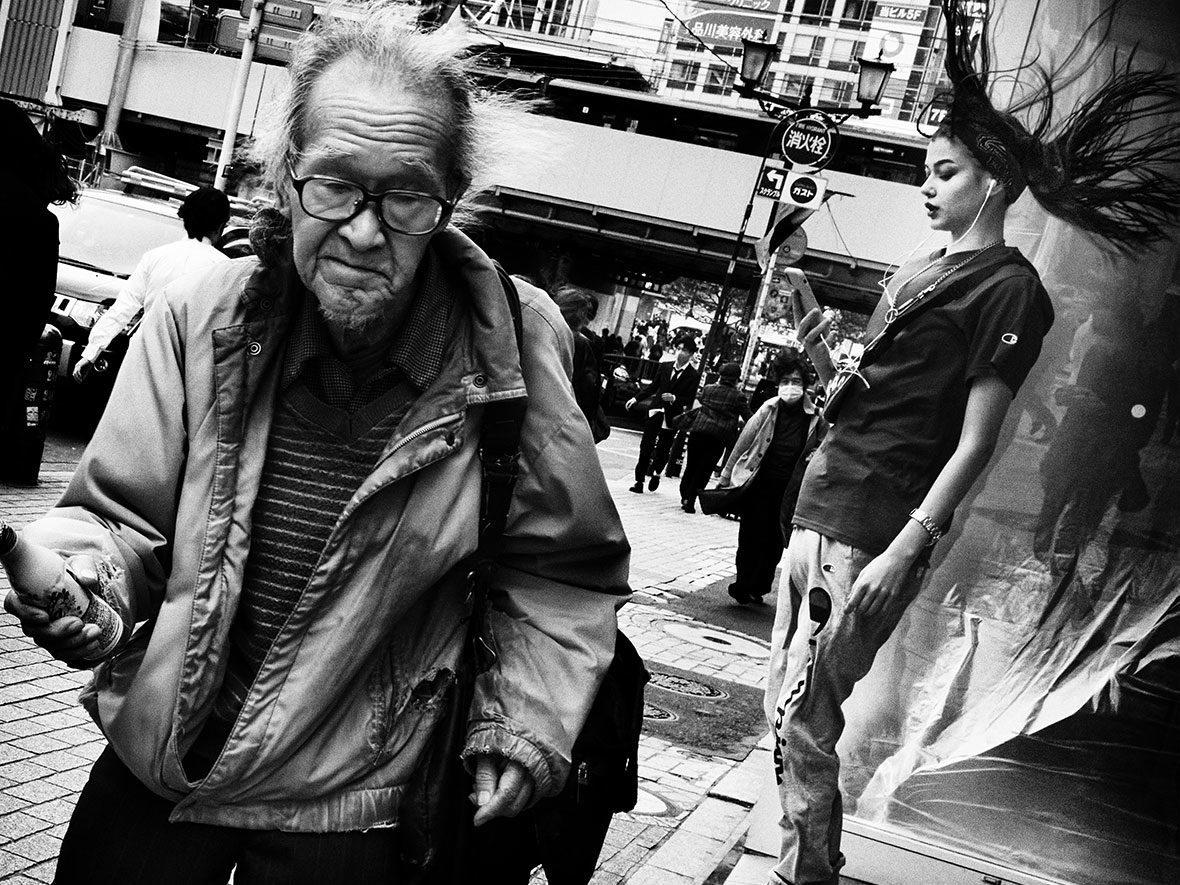 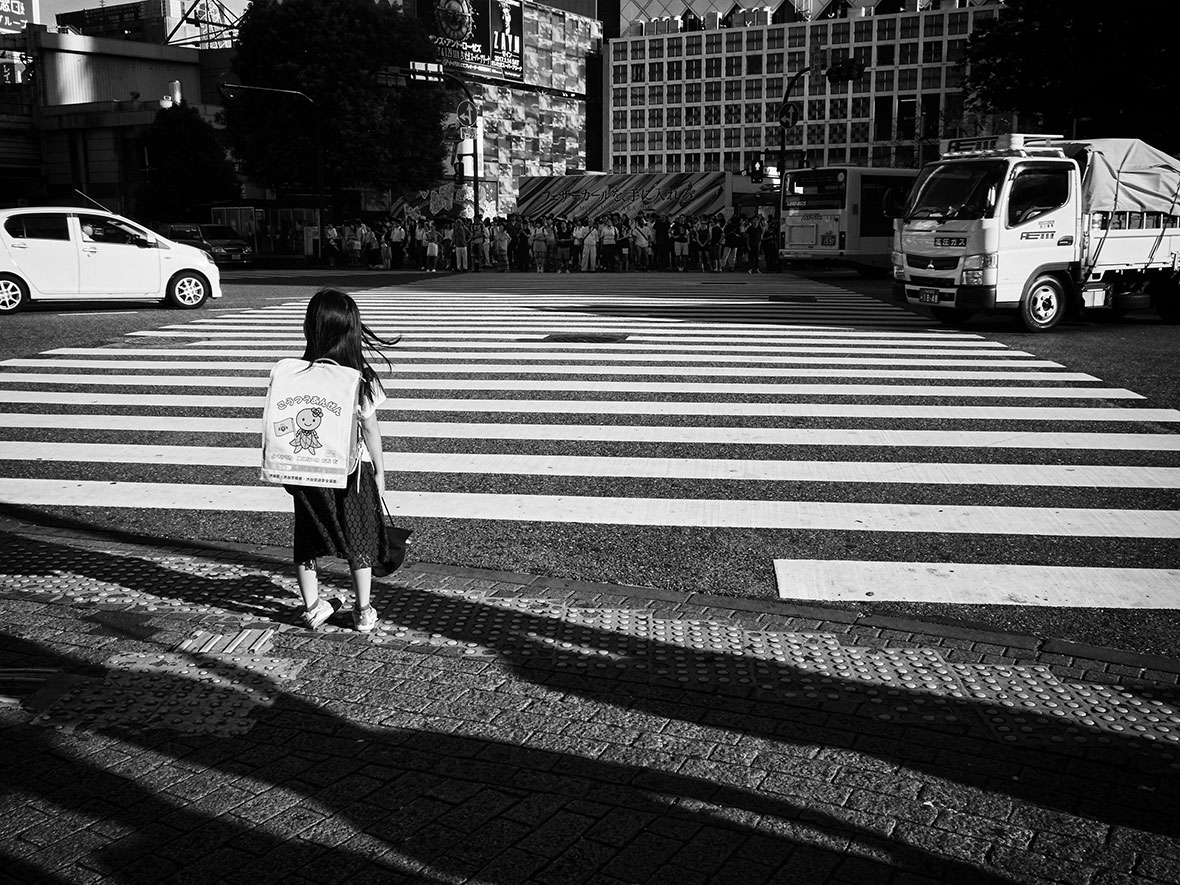 This also allows him to play with shutter speed, blurring objects moving at different speeds from his focus, creating a trail behind them that highlights their movement and speed, such as his image depicting the undefined silhouettes of commuters struggling beneath sharp white streaks of swirling snow. 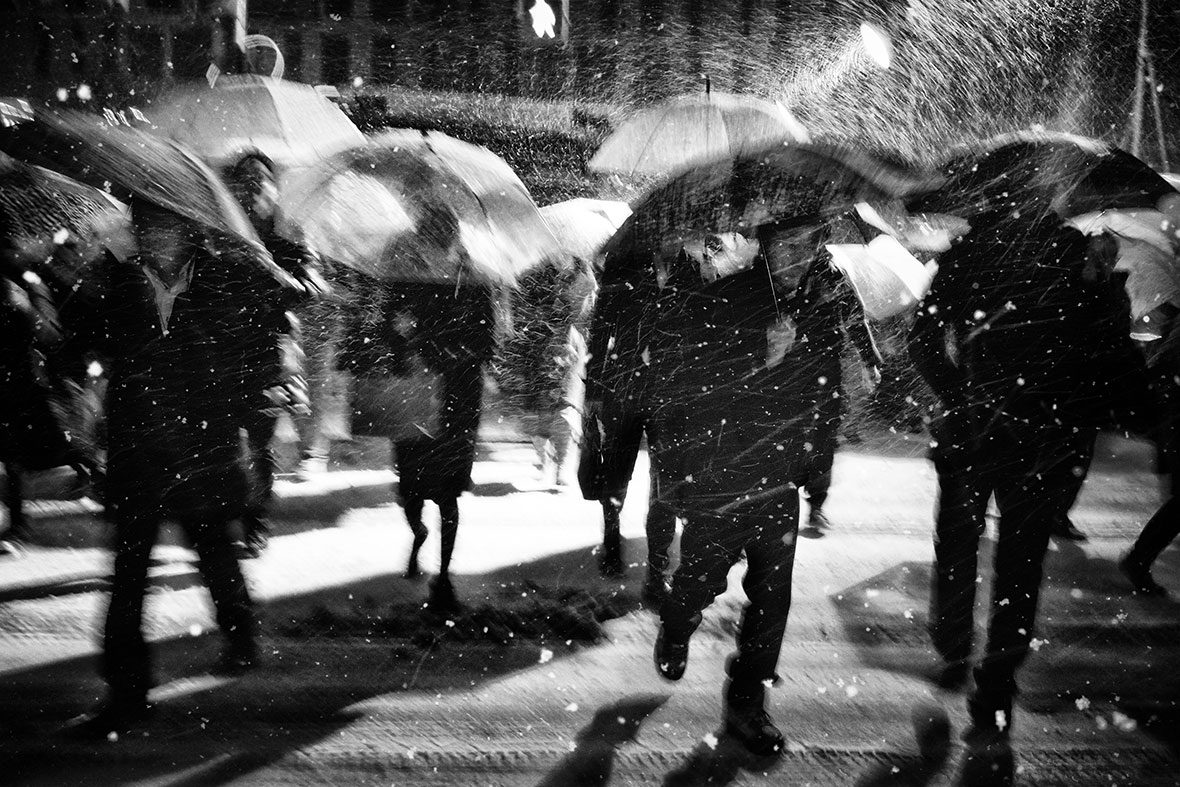 The people filling Kawaoto’s photos are vulnerable, guarded, mysterious, and forgotten. Whatever they are, they’re overstated in their expressions, captured at the peak of their feelings. Personal expression in a public space amplifies everything. It happens regardless of people’s surroundings or because of them. It happens unconsciously or because someone is spilling over and can’t hold it back. When it happens, it’s magic. And Kawaoto is there to capture it.