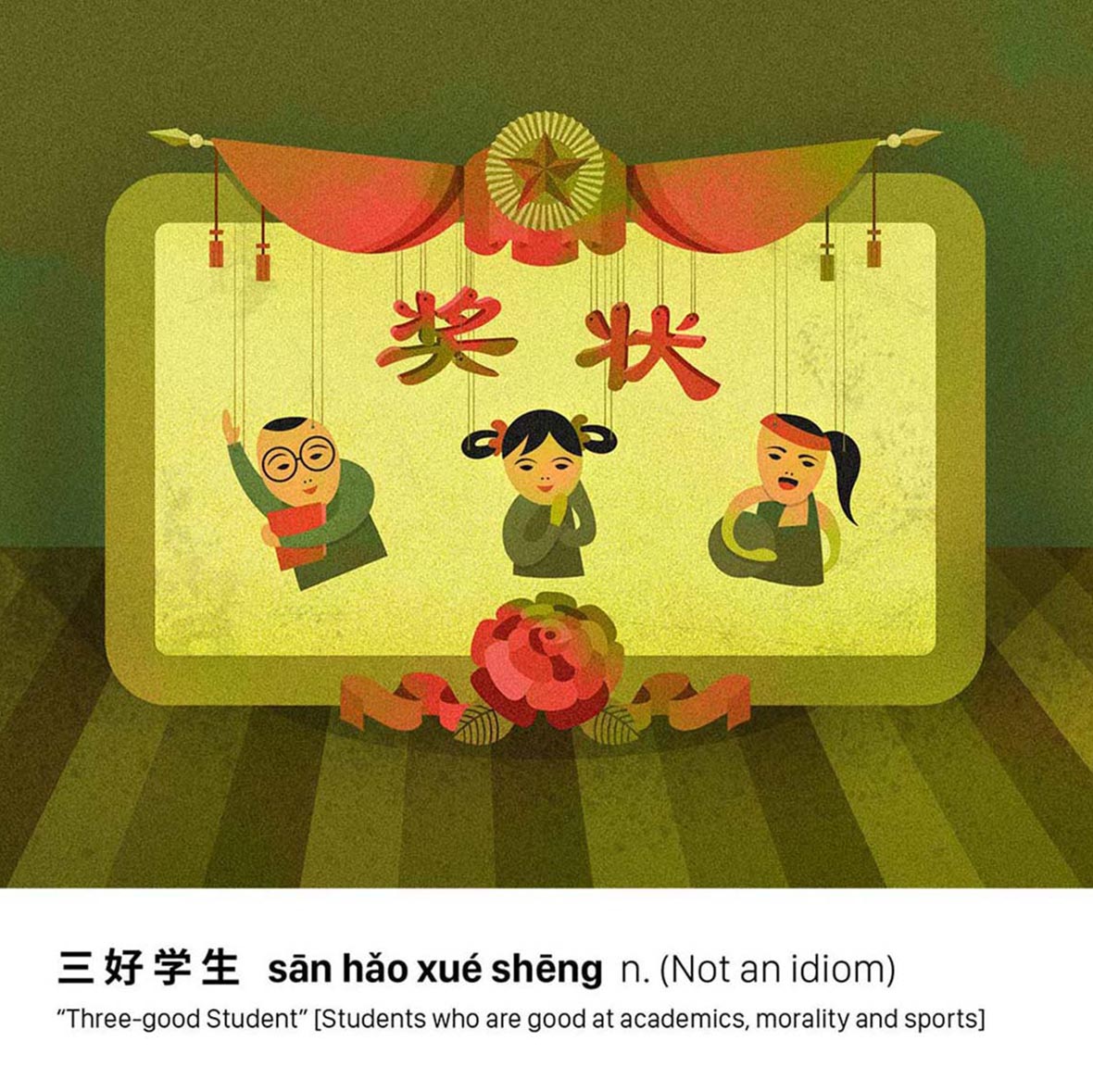 Mostly comprised of four characters, idioms, or chengyu, are one of the most beloved methods of expression in China. The appeal of chengyu lies in their power to convey complex and wordy ideas in a concise manner. But being that many of these phrases originated from ancient Chinese literature, they can, at times, be difficult to make sense of without an understanding of their original context. Luckily, the more convoluted expressions have all but faded from the colloquial lexicon in modern-day China, while many of the easier-to-understand idioms are still widely used.

Today, the internet has become a breeding ground for linguistic creativity. Chinese netizens have begun cleverly crafting their own four-character phrases that follow the formula for traditional idioms. One such phrase birthed by the internet is rén jiān bù chāi (人艰不拆), which translates to “life is already hard enough as is, just cut me some slack.” It’s most often used in a jestful manner. Another quirky internet expression that’s made the rounds in recent times is kōu jiǎo dà hàn (抠脚大汉), which is equivalent to “catfishing” in American slang, but it’s tailored to specifically refer to a man pretending to be a woman.

Similarly, many emojis and stickers used in Chinese messaging apps have followed this trend. Images accompanied by four or five-character phrases are commonplace; they’re used to add humor or alter the expression’s original meaning. While much of these are basically Chinese memes, they serve as a testament to the linguistic versatility and nuanced possibilities of the Chinese language. Designer and recent college graduate Xia Ruolan found herself intrigued by the evolution of these expressions, and in wanting to help explain their meanings to a Western audience, she created Four Chars, an illustration project that translates and simplifies some of the more commonly seen four-character Chinese phrases. 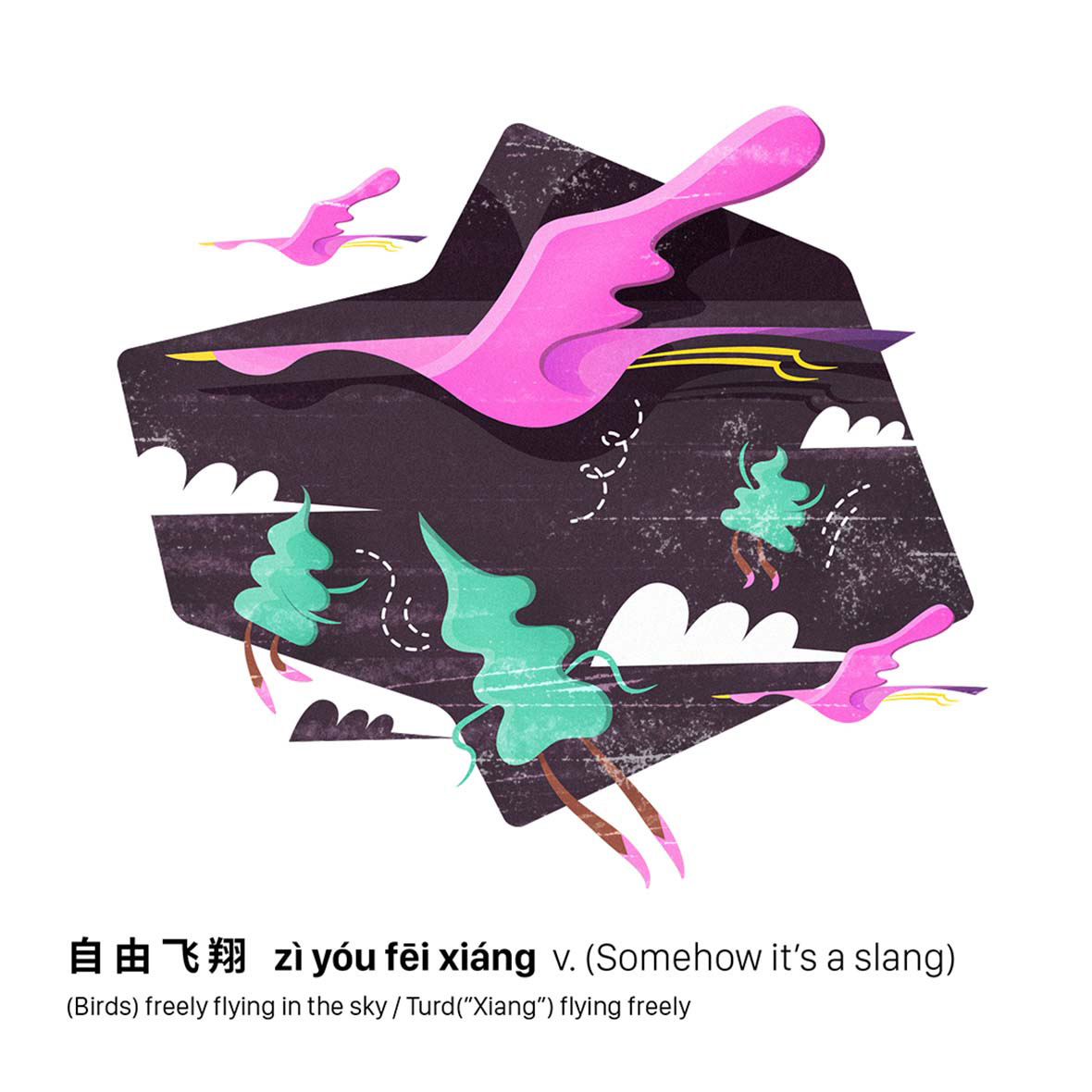 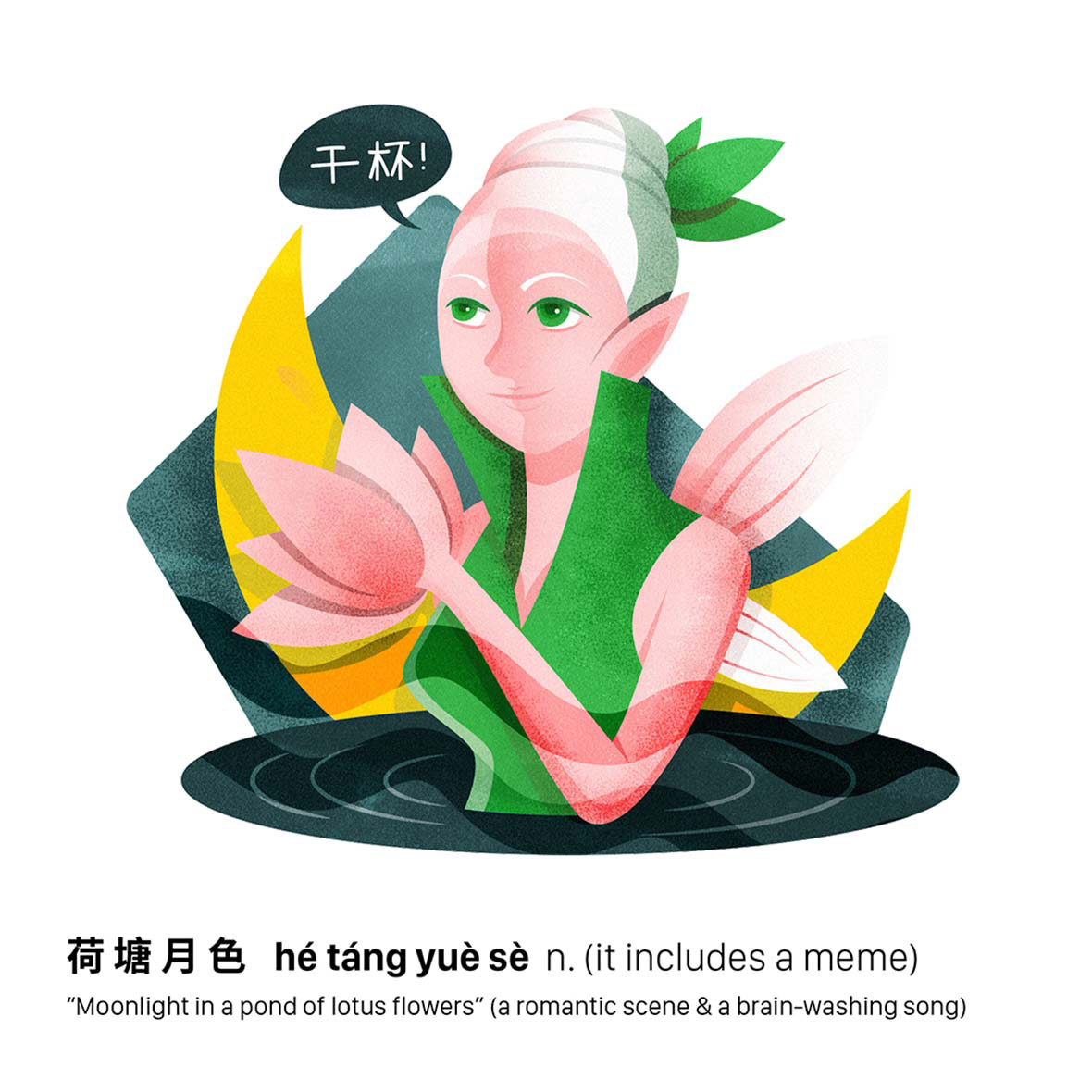 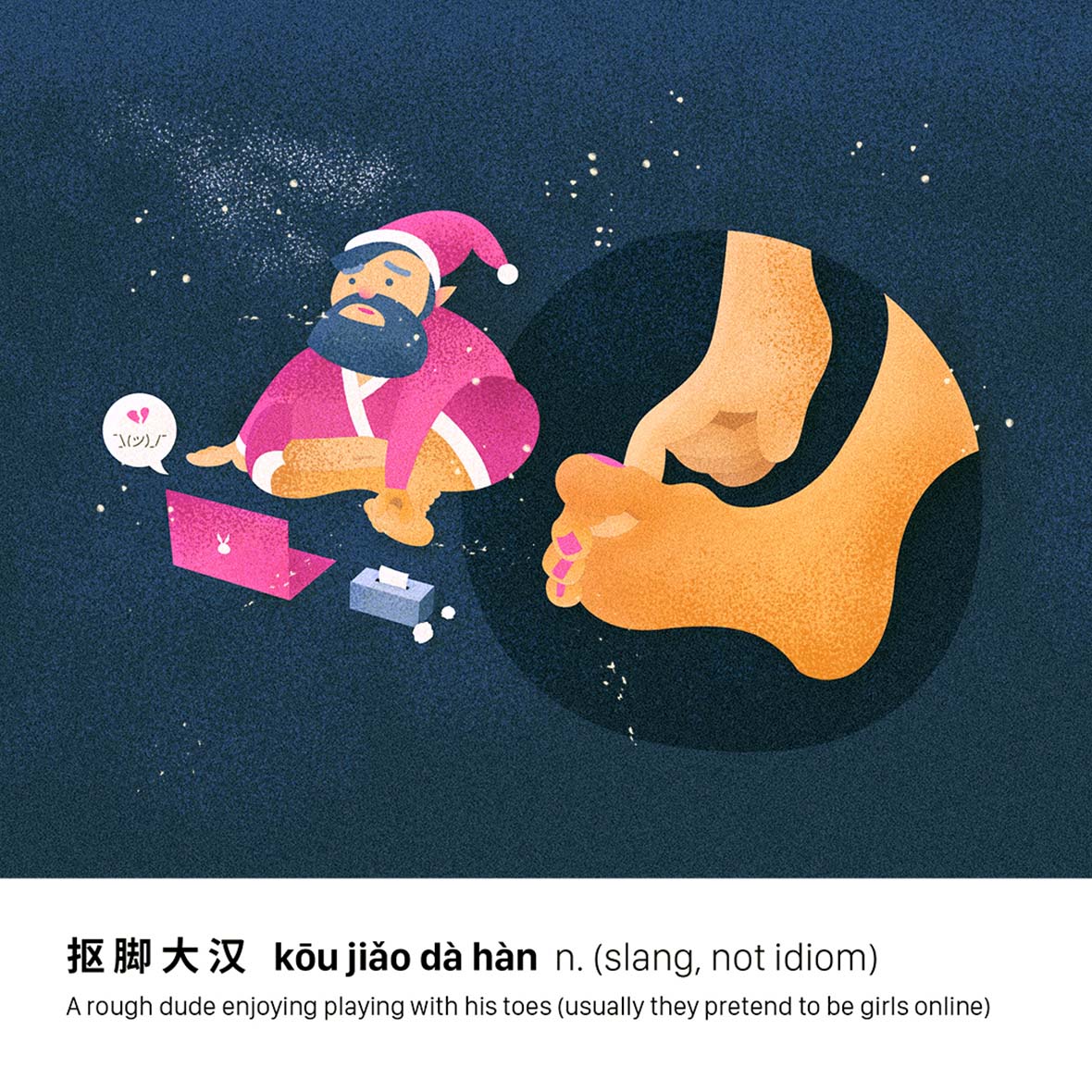 In the early days of Four Chars, Xia mainly used the project as a way of setting aside personal time for herself after work, a way to unwind from her stressful days. Xia recalls the many trials and tribulations that she experienced within the first year of her career: She underwent four different boss changes, switched departments three times, and even had to relocate to another country. But aside from helping her cope from the stresses of work, and perhaps more importantly, the project was a way for Xia, who’s spent much of her life abroad, to reconcile with her cultural roots.

“It may seem like being independent and living in a new country is a liberating experience,” she tells us. “But the truth of the matter is, it felt like I was running into dead ends everywhere.”

Being that Xia’s mother tongue is Chinese, Xia often found herself unable to fully articulate certain ideas in English. Out of these frustrations, she gained a newfound appreciation for the depth and versatility of the Chinese language. Xia wanted a way to share the beautiful subtleties and complexities of her native language with the world but needed to figure out an easily accessible approach. Noting the vast amounts of four-character expressions that exist nowadays, Xia came up with the idea to use illustration to offer easy-to-understand explanations for these common Chinese phrases, and thus, Four Chars was born. 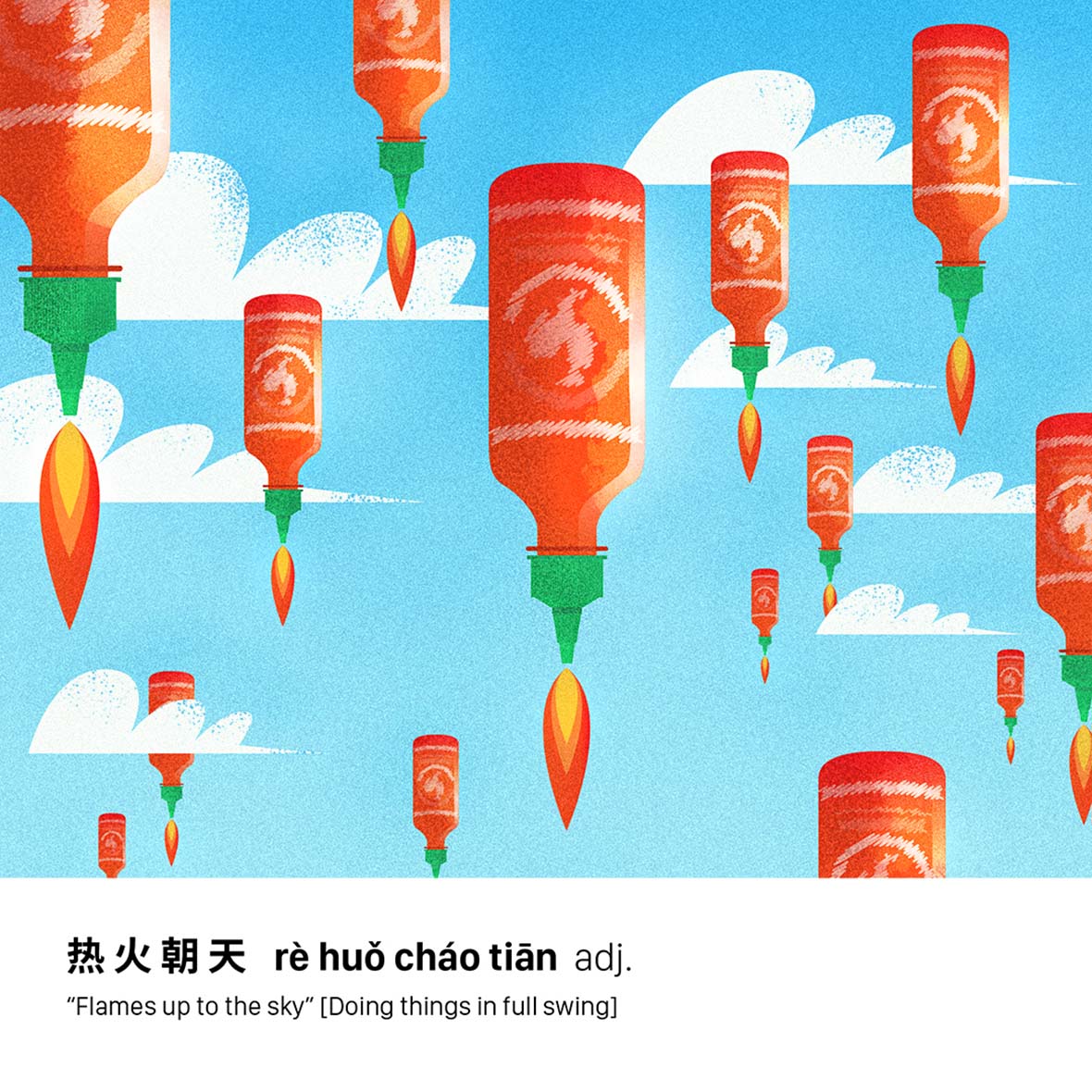 From fine art to movies and video games, Xia’s inspiration comes from a variety of different sources. “One time, I was cooking something with Sriracha. I was just staring at the bottle of red sauce, and the idiom rè huǒ cháo tiān (热火朝天) popped up in my head mind. At the same time, an image of René Magritte’s surrealist paintings surfaced in my mind. Combining the two, I came up with the idea to draw a bunch of Sriracha rockets flying into the sky as a way of presenting the idiom.” 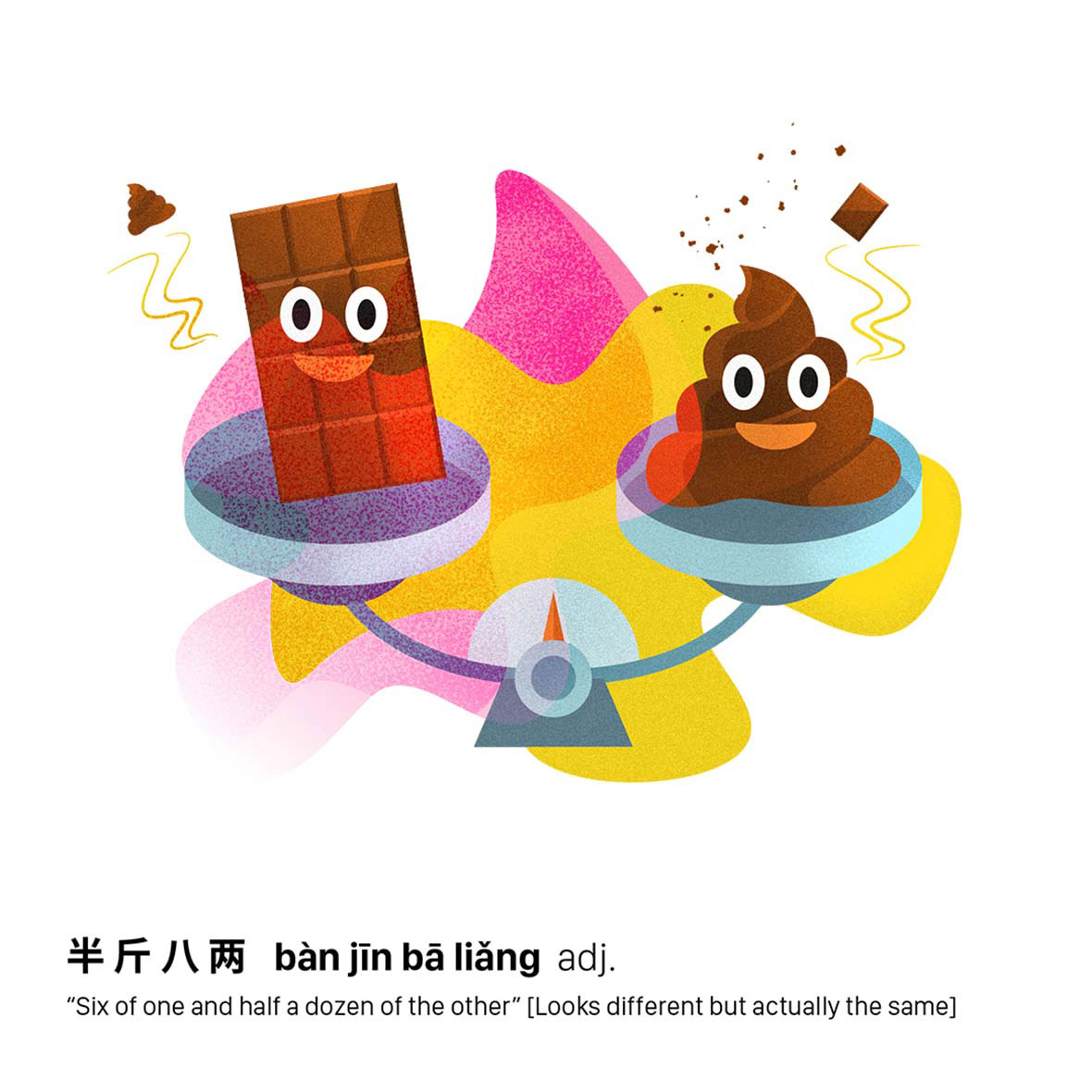 Xia acknowledges that conceptualizing and executing the illustrations aren’t the toughest steps of the creative process. The most challenging part lies in the fact that there are lots of four-character phrases that simply cannot be explained in a sentence or two. “In most cases, I have to simplify the full meaning; if the dictionary doesn’t explain the literal meaning or breakdown underlying connotations of the phrase, I also have to figure out how to add it in. My boyfriend will often help out too and fix up my ‘Chinglish.’” Xia says, grinning. “But when I’m trying to translate these idioms, it’s not just about their meaning. The most important thing is to explain why its an interesting phrase.”

One of the quirkier phrases Xia covers in the series is “děng dēng děng dēng (等灯等灯),” a four-character onomatopoeia that references Intel’s iconic jingle. The first and third character, děng (等), means wait. The second and fourth character, dēng (灯), means light. Her illustrations present a literal interpretation of the phrase with characters holding traffic lights. This expression is most often used as playful banter between friends and simply means “wait” or “hold on a minute.”

Another phrase Xia enjoyed working on was wèi ài gǔ zhǎng (为爱鼓掌), which is a double entendre. Its literal meaning is “clap in the name of love,” but in Chinese, the onomatopoeia for clapping – “pa, pa, pa” (啪啪啪) –  is associated with the sounds of intercourse (or specifically, the sound of skin slapping against skin). The expression is essentially used as a euphemism for talking about sex. Taking into consideration of the fact that many people might not understand the dual meaning of the phrase, she decided to approach the illustration and definition in a literal manner. Another point she took into consideration is that if she were to present the true meaning through illustration, it’d most likely result in a raunchy image that could be censored by Instagram. Xia tells us, “It was fun to look at the comment section for this post,” she says. “Many people who’re aware of the true meaning were cracking jokes with other double entendres.” 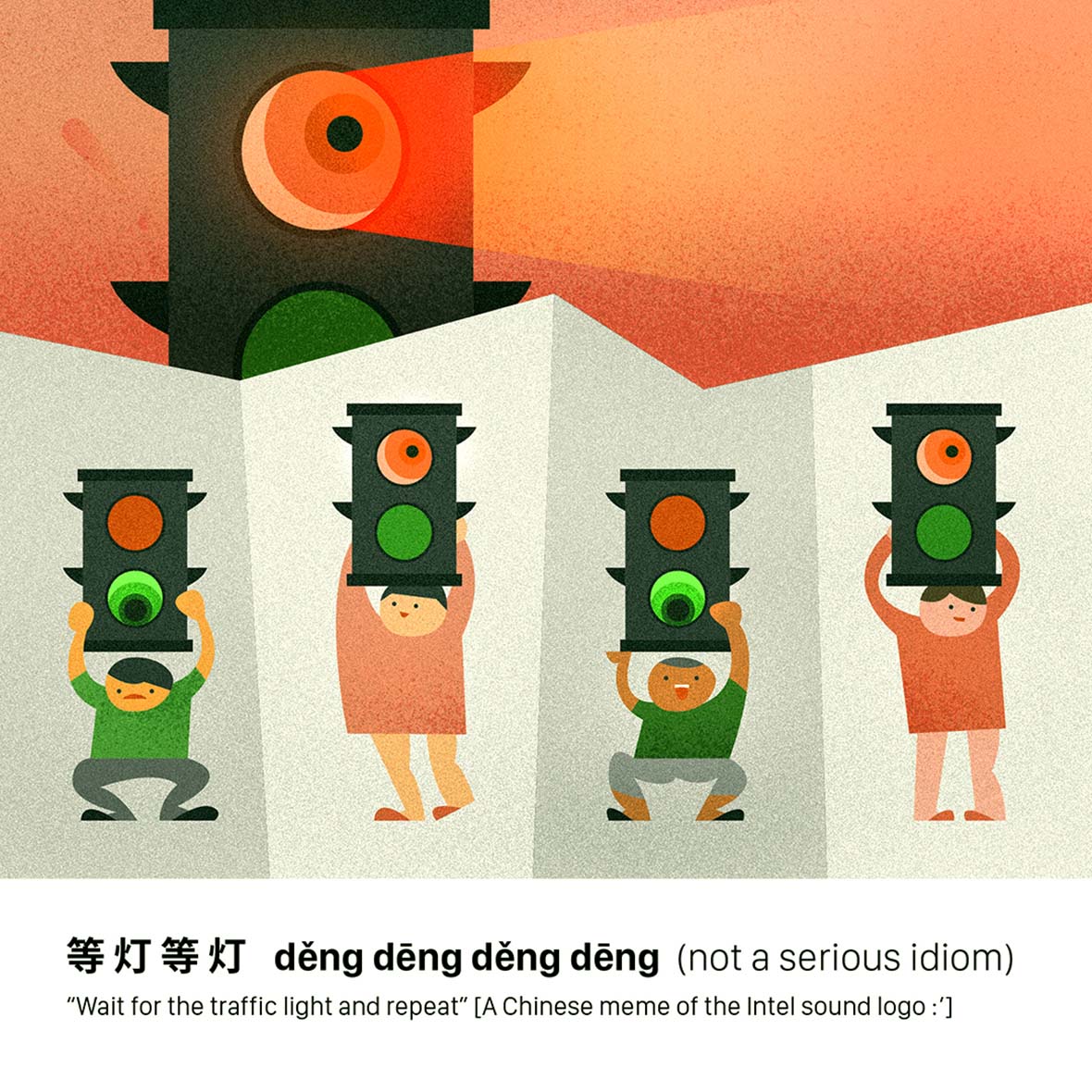 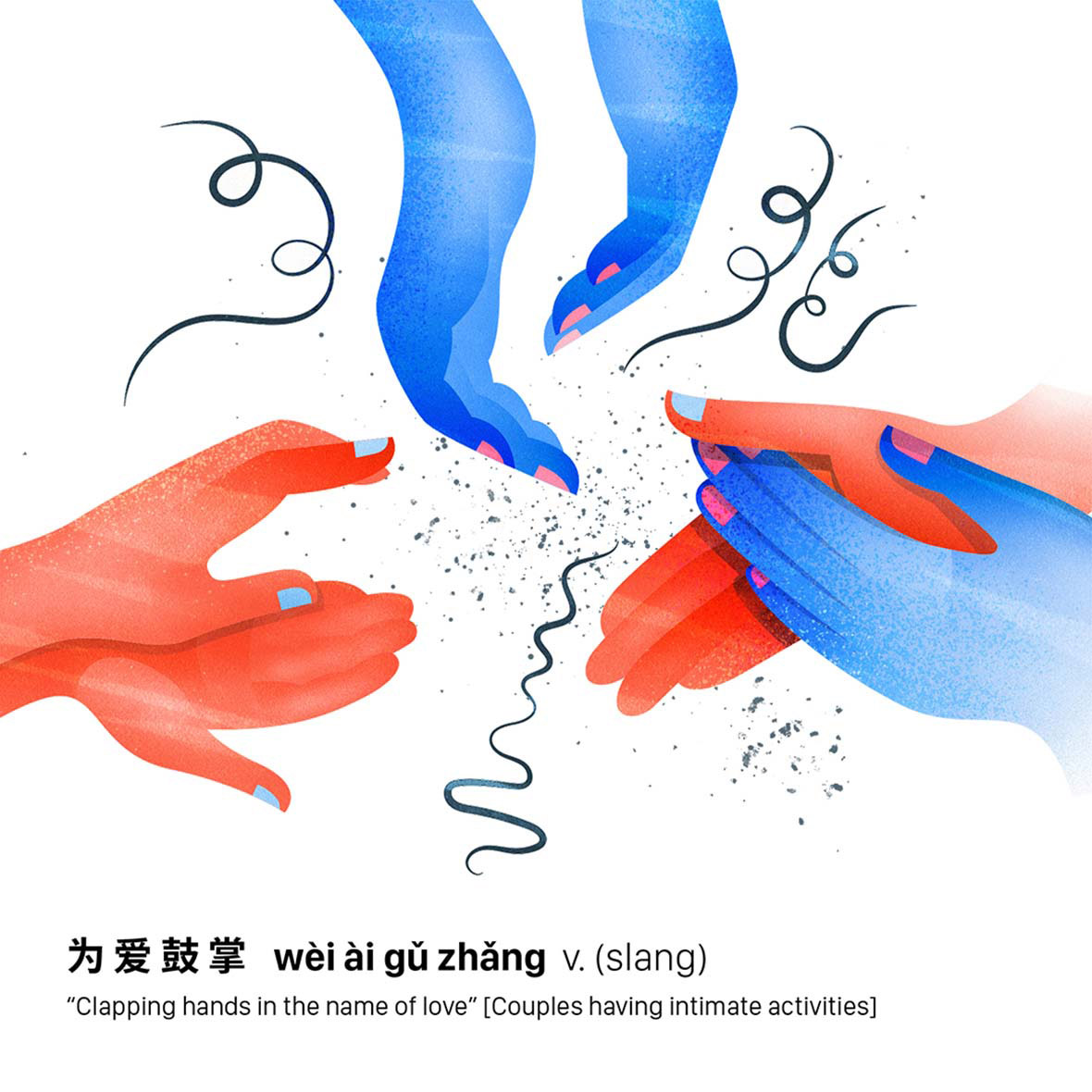 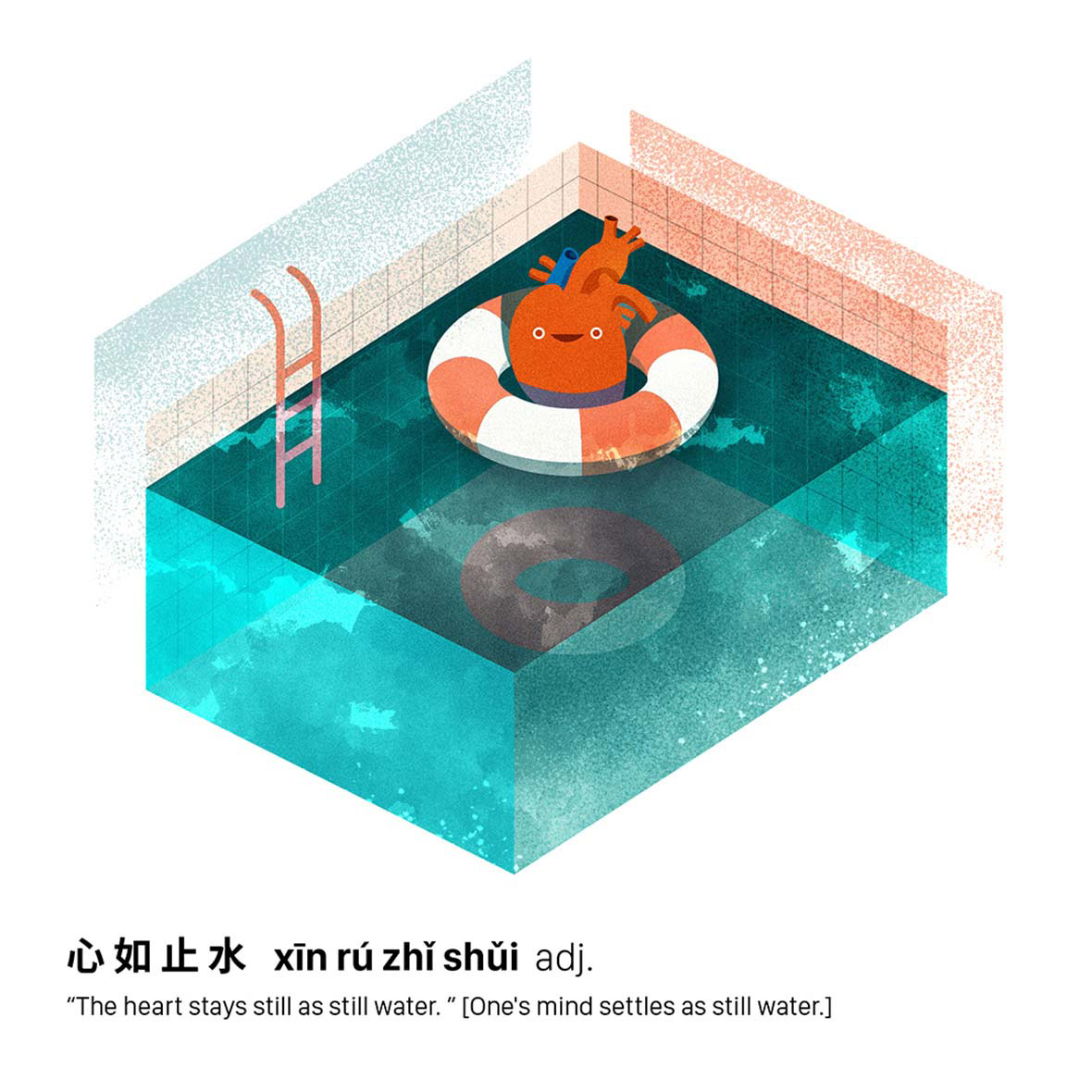 Having never been formally trained in art, Xia says this project is actually her first-ever attempt at dabbling with illustration. “While Four Chars has helped me a lot personally, it’s actually my first time ever doing something like this. It’s helped me with managing my stress, but in a way, it’s pretty much just escapism. […] I do feel a sense of elation and relief whenever I’m working on the project. It feels different from doing something just to kill time. There also aren’t any extreme ‘eureka’ moments nor do I experience creative stagnation; the project lets me channel my creativity in a pretty consistent way. I also get to experiment with new styles or aesthetics every day.”

Recalling what life was like before she began the project, Xia estimates that 90% of her time was spent figuring out how to be more effective, how to work faster, and how to get results. Being locked into this mentality led her to feel restless and irritable all the time. “So, as someone who’s always looked within for answers, I began asking myself how I could get out of this slump. I guess I hoped I could use the remaining 10% of my time to come up with an answer, and it turns out, Four Chars was the result of that – this project gave me a chance to work on something that didn’t necessarily need an end goal. It was time that I can use for my personal enjoyment and to better myself creatively. In a way, I’m grateful. If I didn’t face the hardships that I did, then I wouldn’t have come up with Four Chars. Its helped me find motivation in all aspects of my life.” 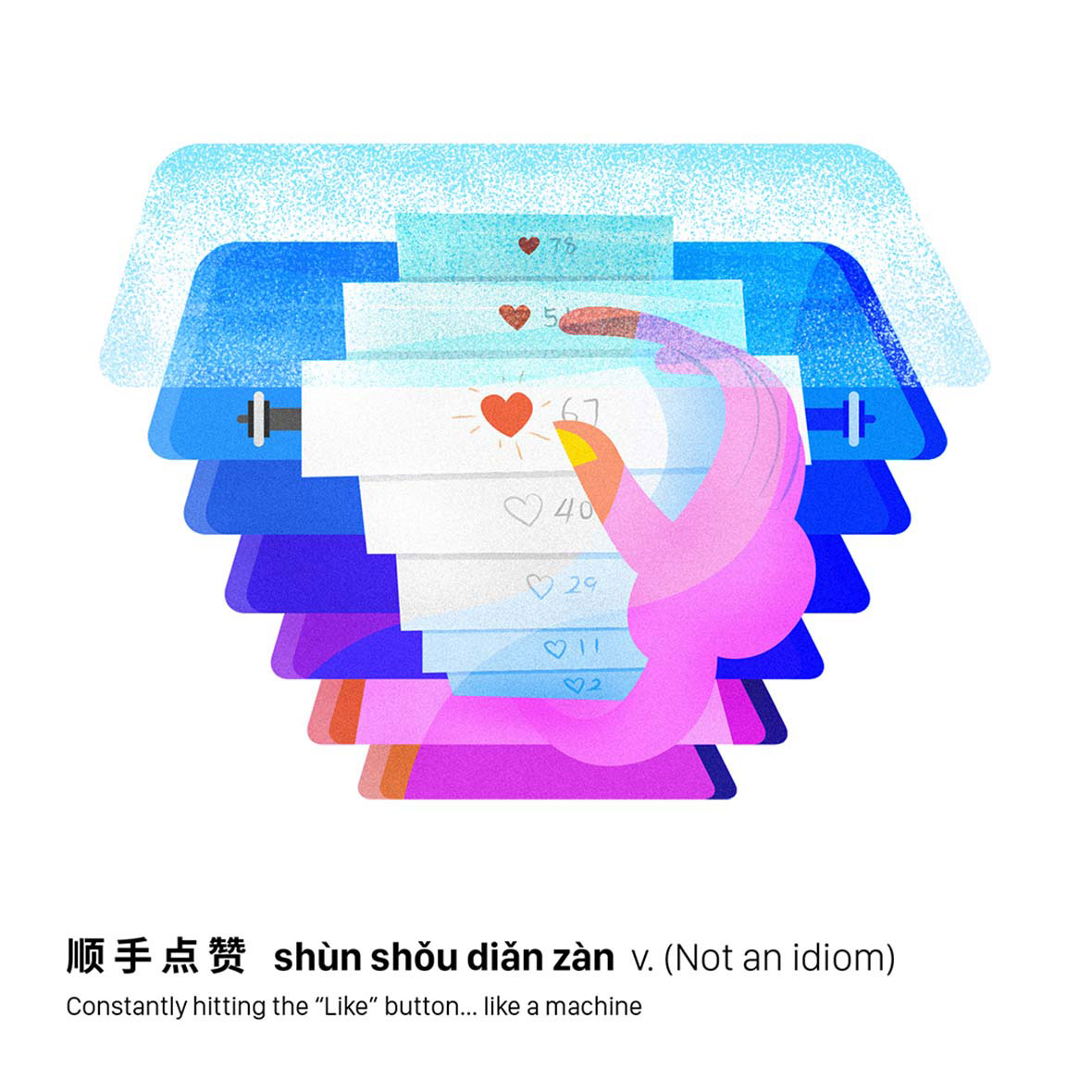 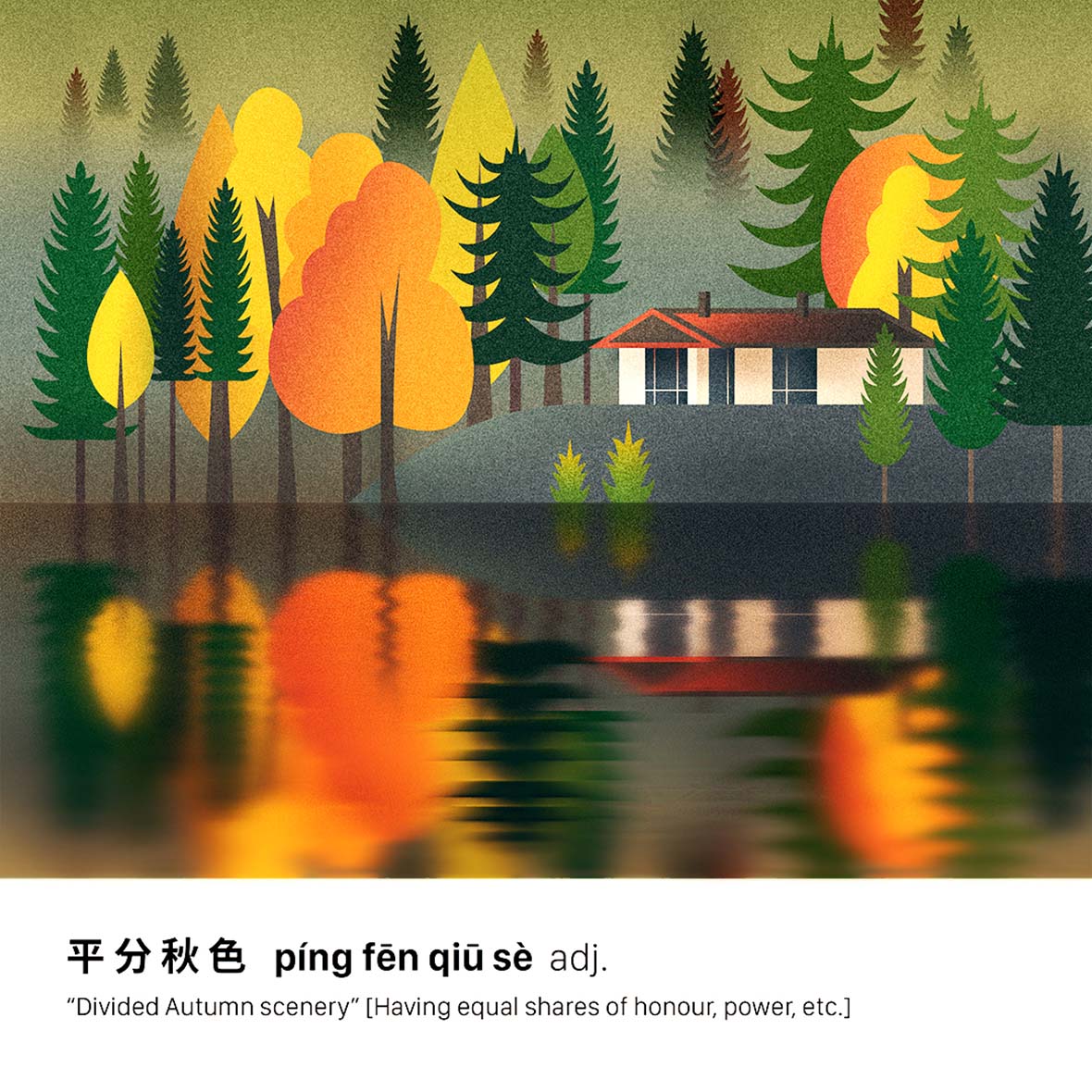 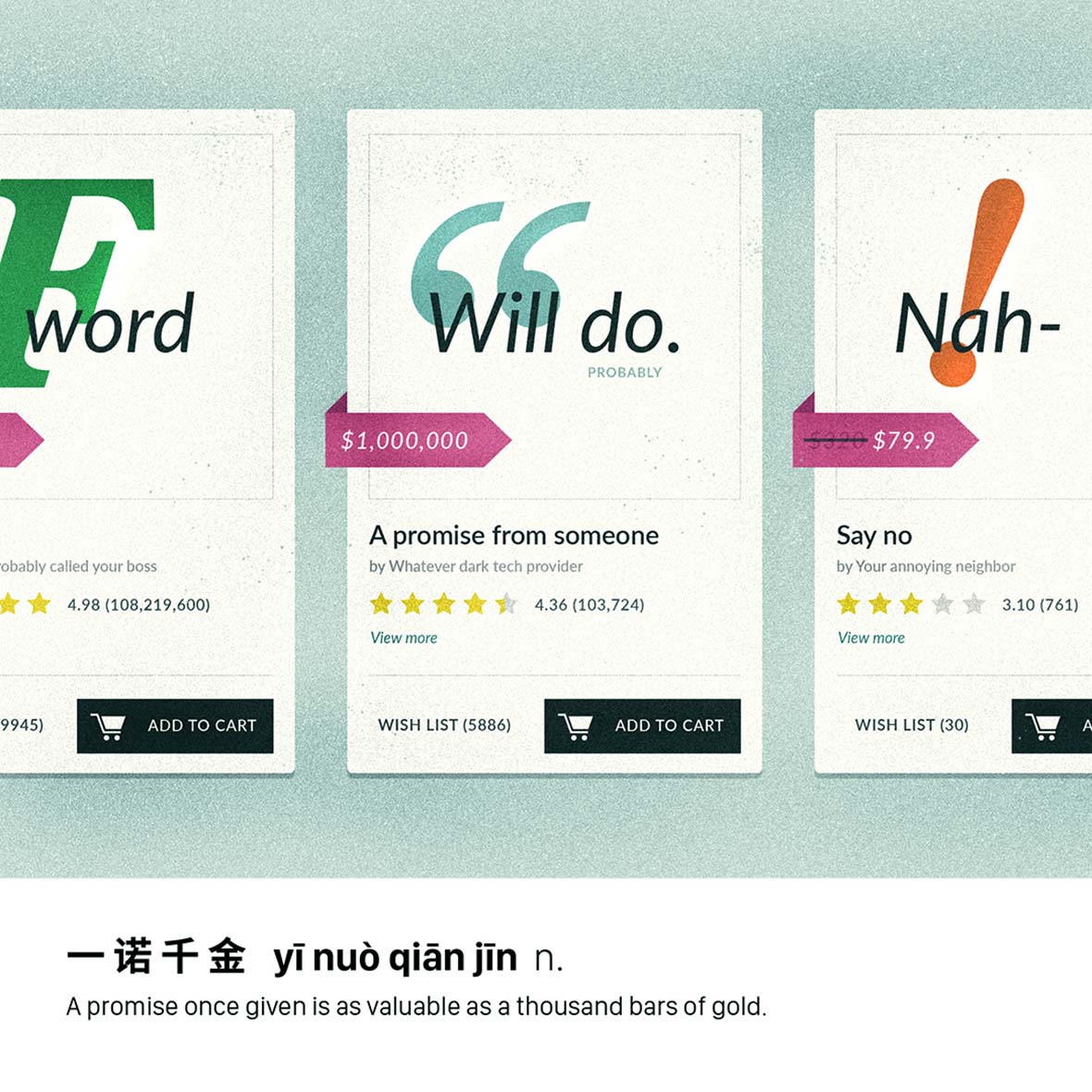 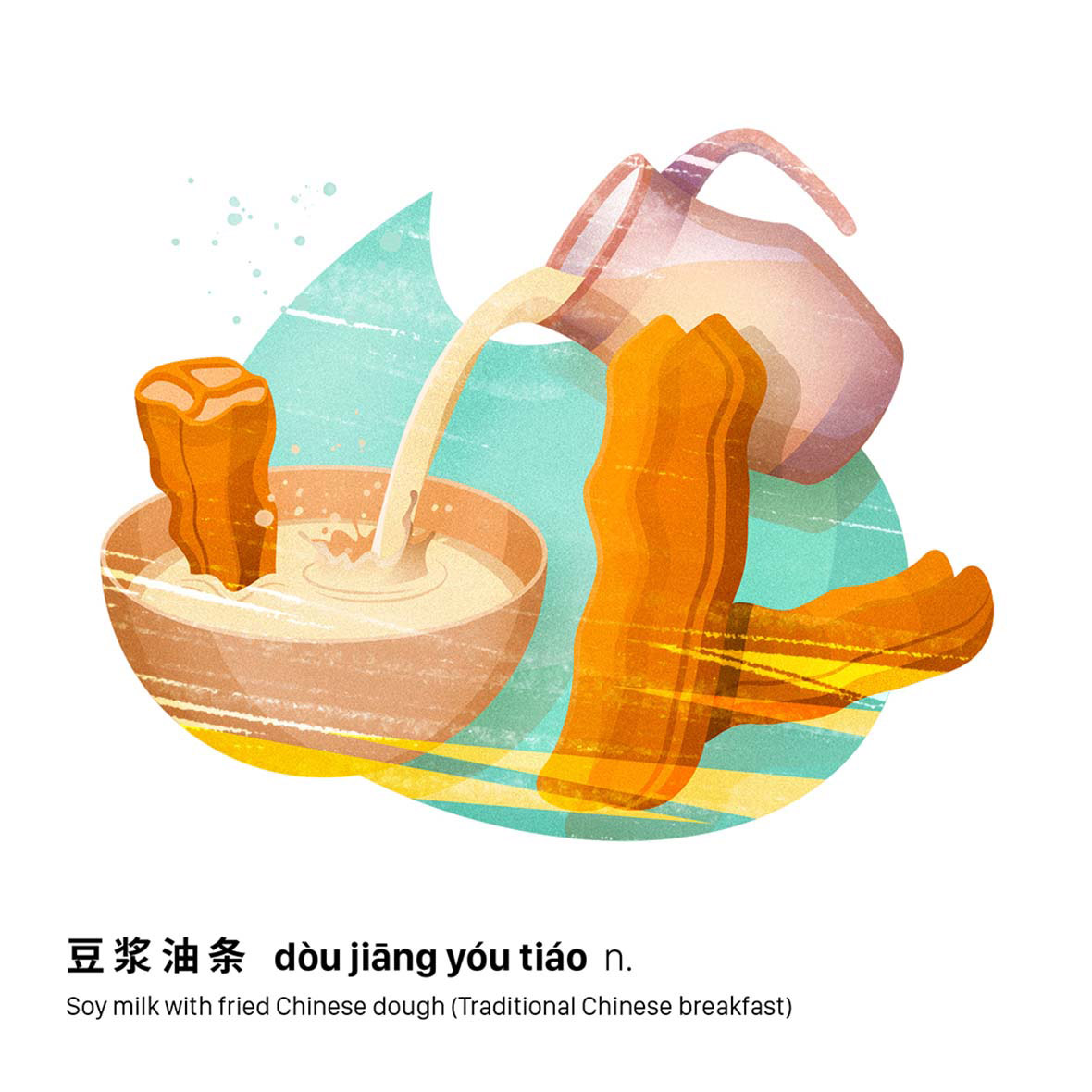 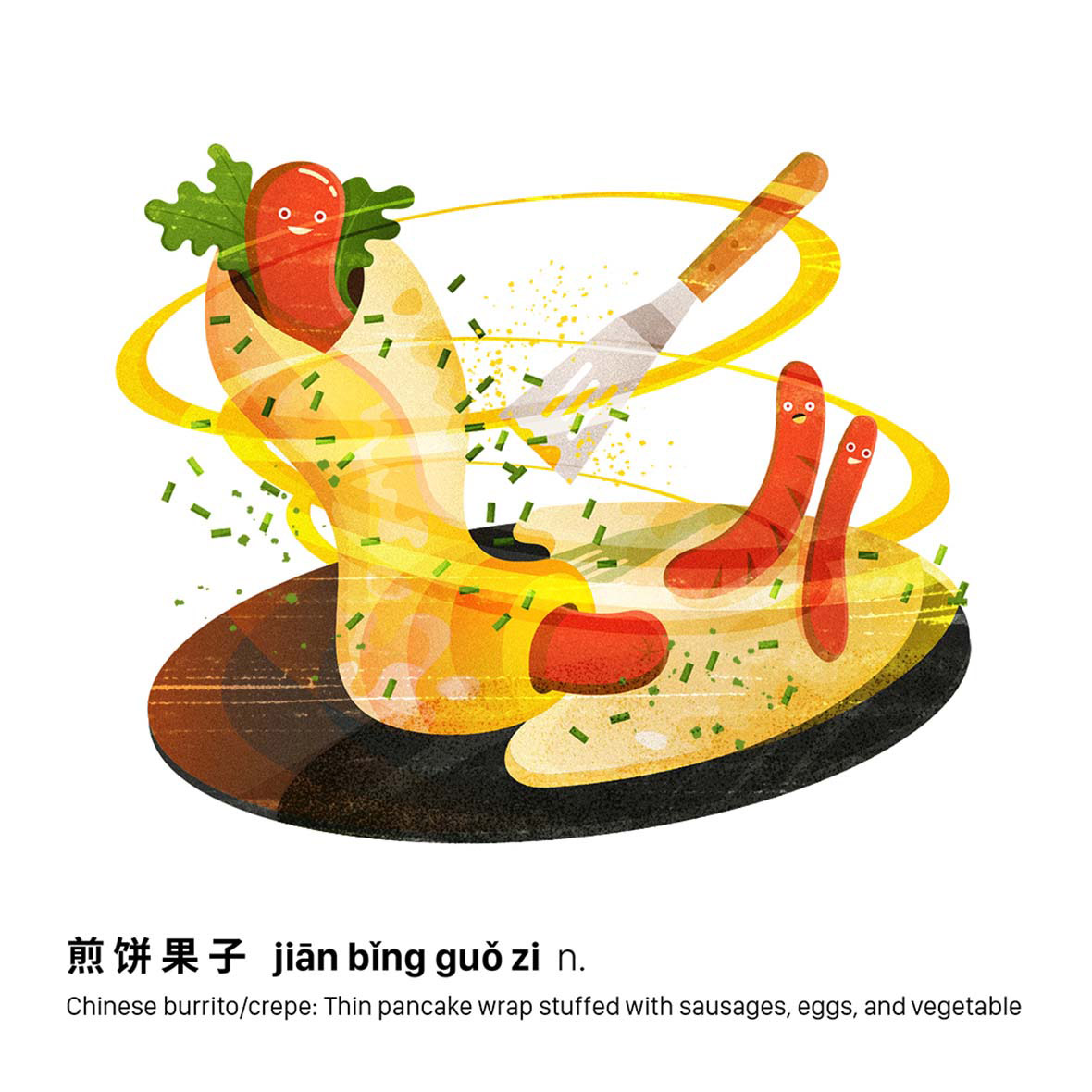 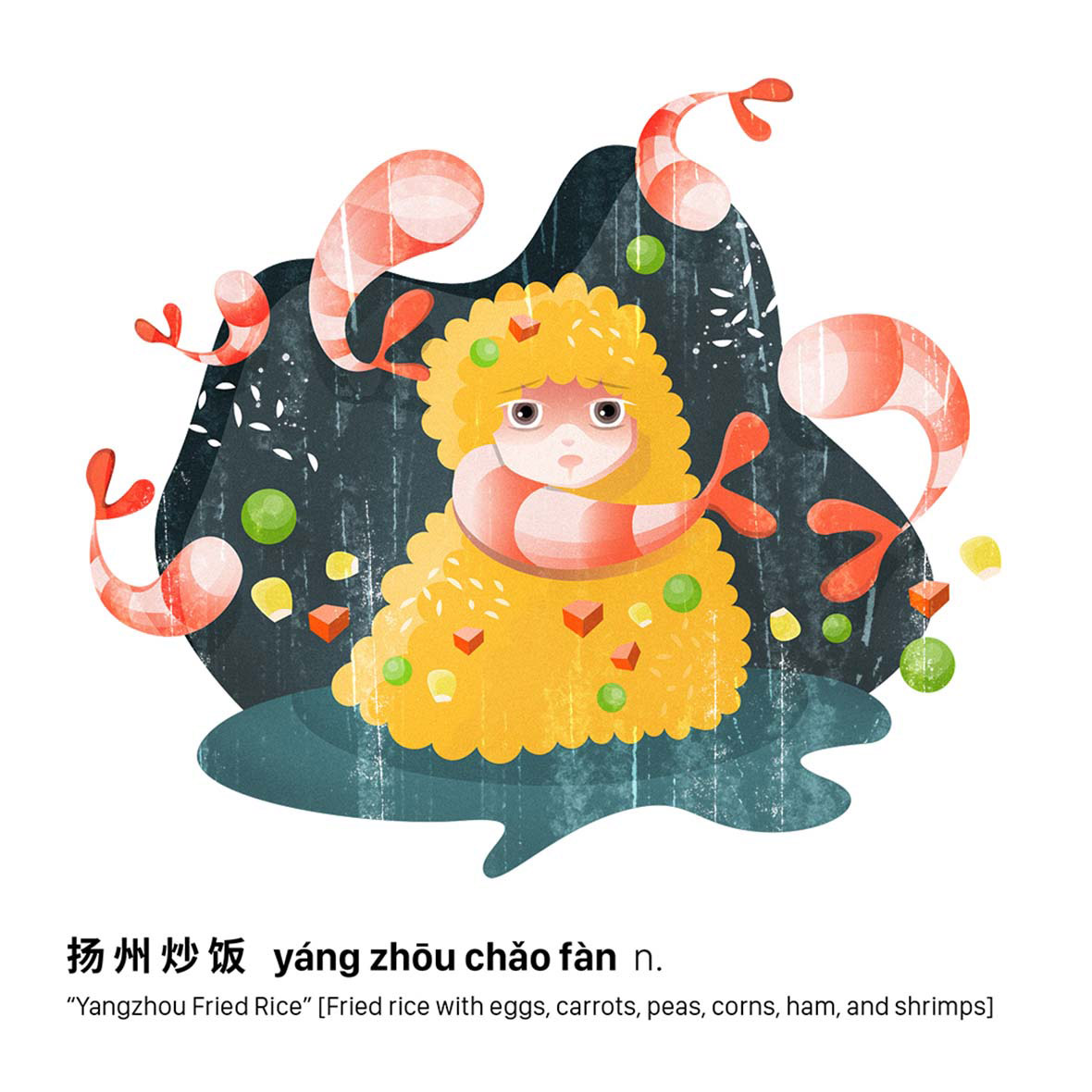 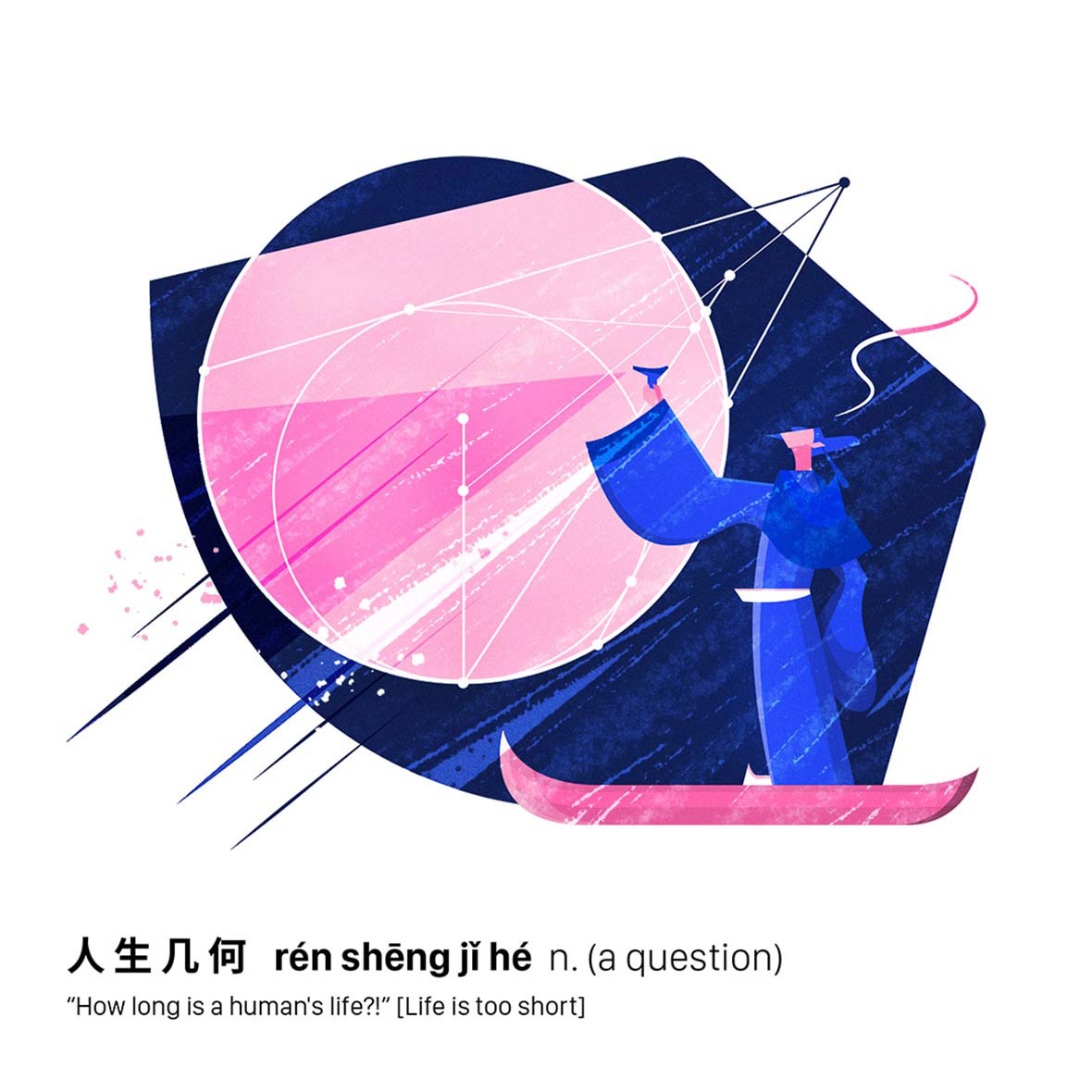