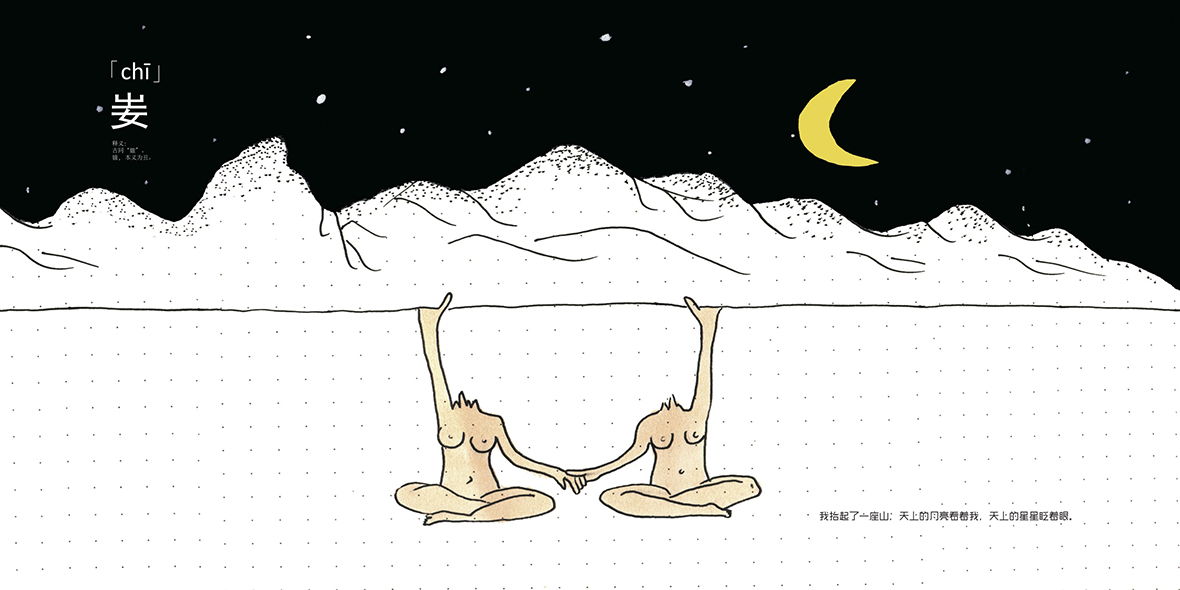 "I lift the mountain, as the moon in the sky watches me, and the stars blink."

Inspired by the Chinese character nǚ 女, which translates to “female” in English, 90s-born Chinese illustrator Zhang Yalan created a series of illustrations dissecting the word’s usage. The nǚ character is a common radical (a root character in the Chinese language that convey semantic or linguistic information) that’s used as a component in a wide range of other words, including hao 好 (good), tā 她 (her), zhuāng 妆 (makeup), xìng 姓 (forename), nú 奴 (slave), fù 妇 (wife), and jì 妓 (prostitute), among many others. The series, which began as a university graduation project, now consists of over 100 illustrations. 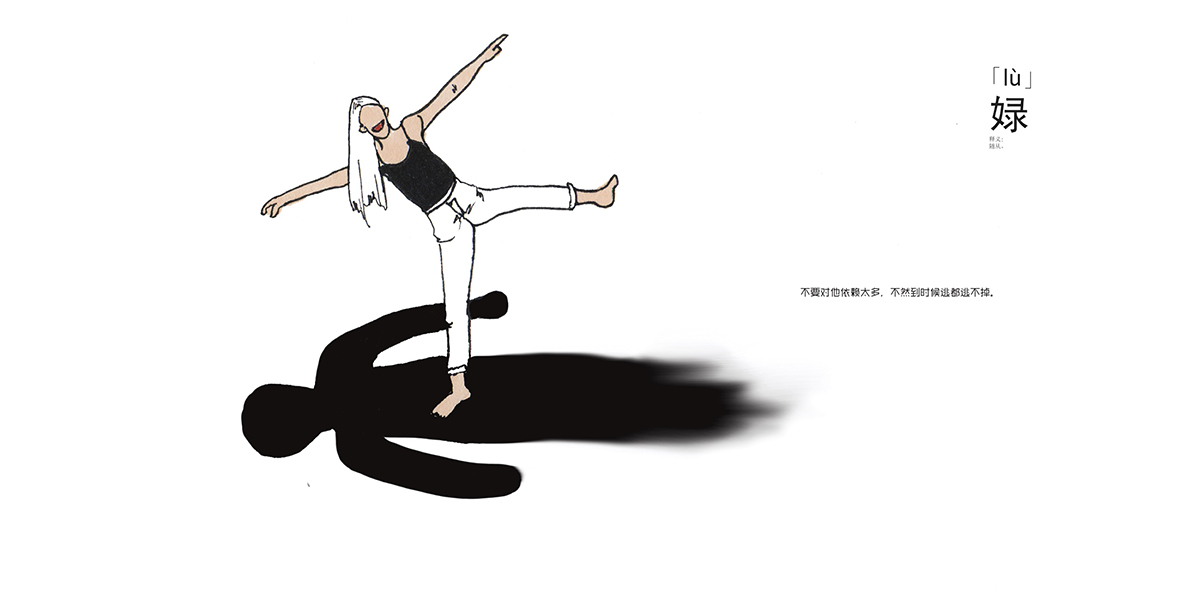 "Don’t depend on him too much, otherwise you may never be able to leave." 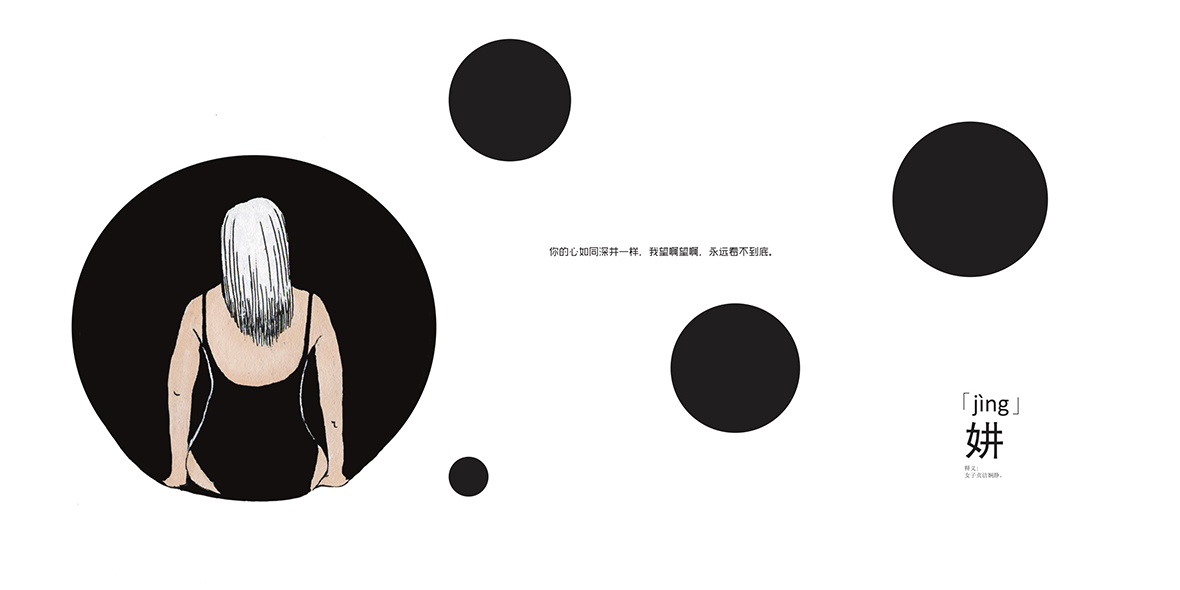 "Your heart is like a well. No matter how hard I look, I can't see the bottom."

From describing beautiful and elegant women to lewd prostitutes, characters using nǚ as a radical are able to communicate both positive and negative meanings

However, Zhang has observed the majority seem to lean towards the latter and is indicative of a larger societal issue. “Did this phenomenon come about due to how Chinese history and society developed with a predominantly misogynistic attitude?” she asks. “That question, along with my observations of gender inequality issues in modern times, is what motivated me to create this series.” 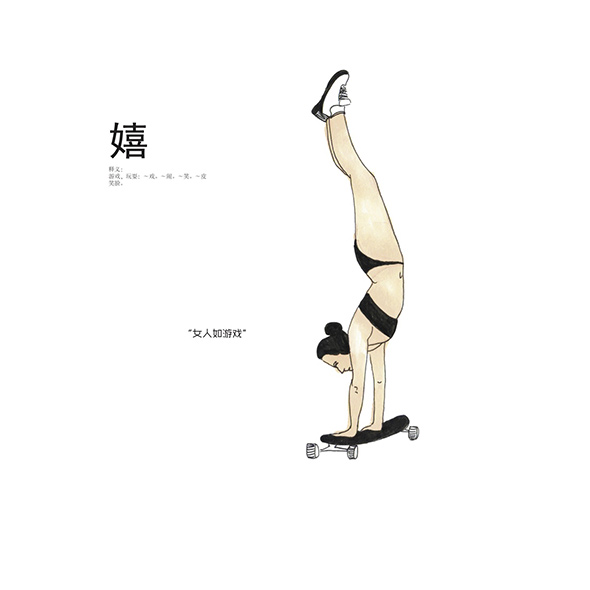 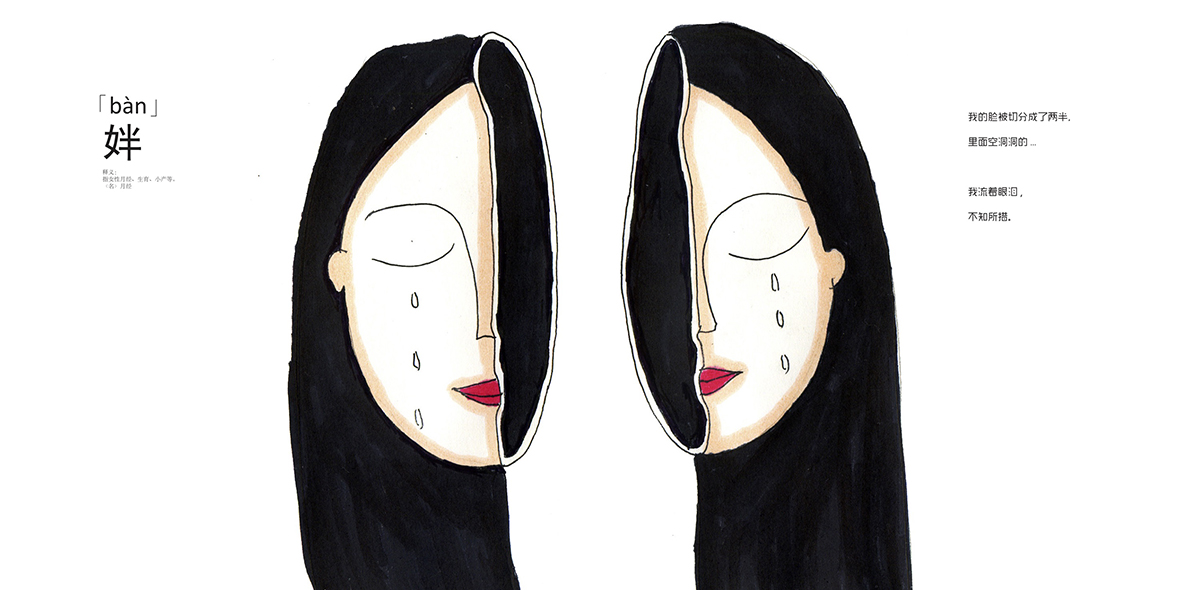 Zhang admits that her decision to create this series is naturally relevant to her own identity as a female. “It doesn’t matter if it’s male discrimination towards women or women’s self-deprecating attitudes towards themselves. Traditional Chinese society hasn’t addressed these topics and most people will choose to ignore or avoid them.”

So this begs the question, how do you create a discourse around gender inequality and encourage more people to participate in the discussion? These are the questions that Zhang attempts to answer through her series: “I didn’t create this series out of enjoyment. I hope that my illustrations will allow more people to become aware that these kinds of issues exist.” 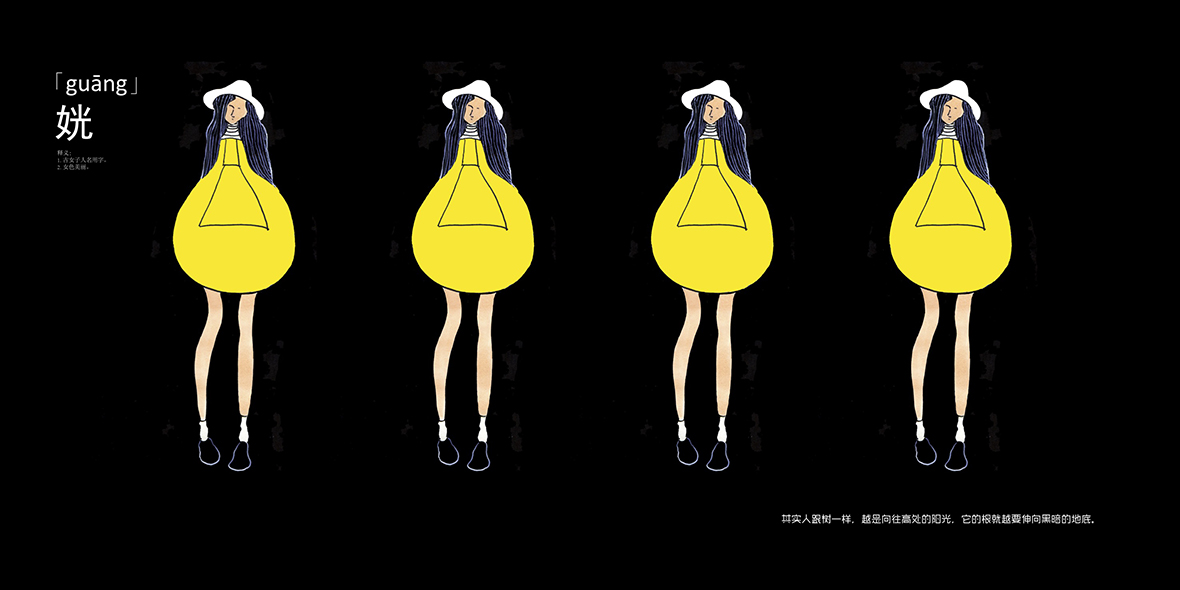 "People are just like trees, the higher you grow towards the sun, the deeper your roots penetrate into the darkness." 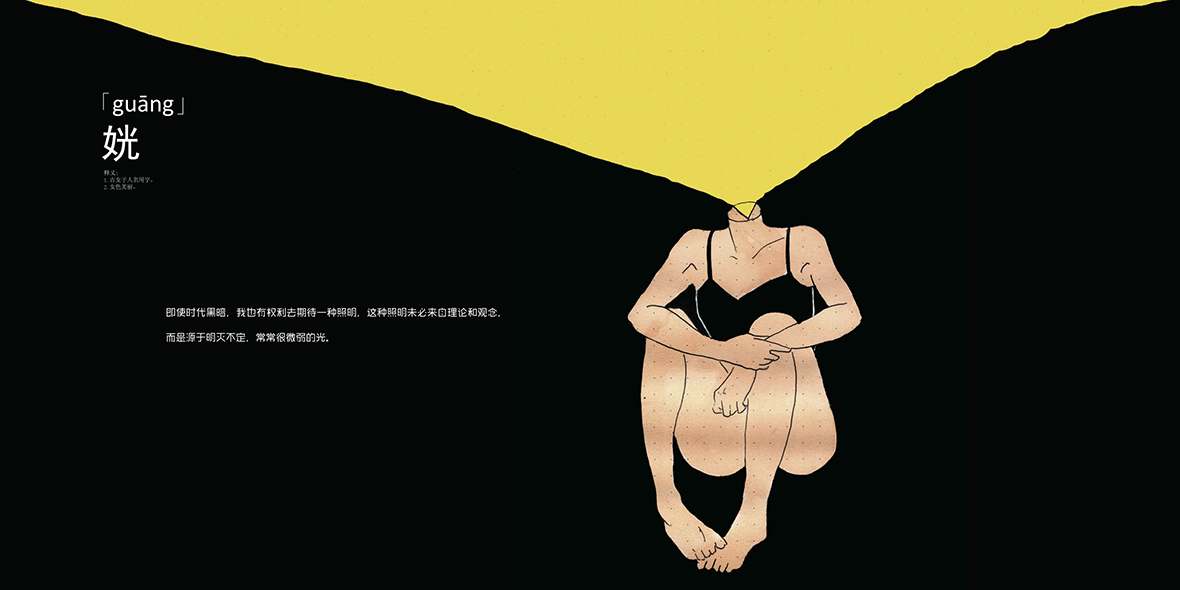 "Even if we live in a dark age, I still have the right to hope for light. This hope doesn’t come from theories or ideas, and whether it comes from the dark or the light is uncertain. Regardless, the light is often dim." 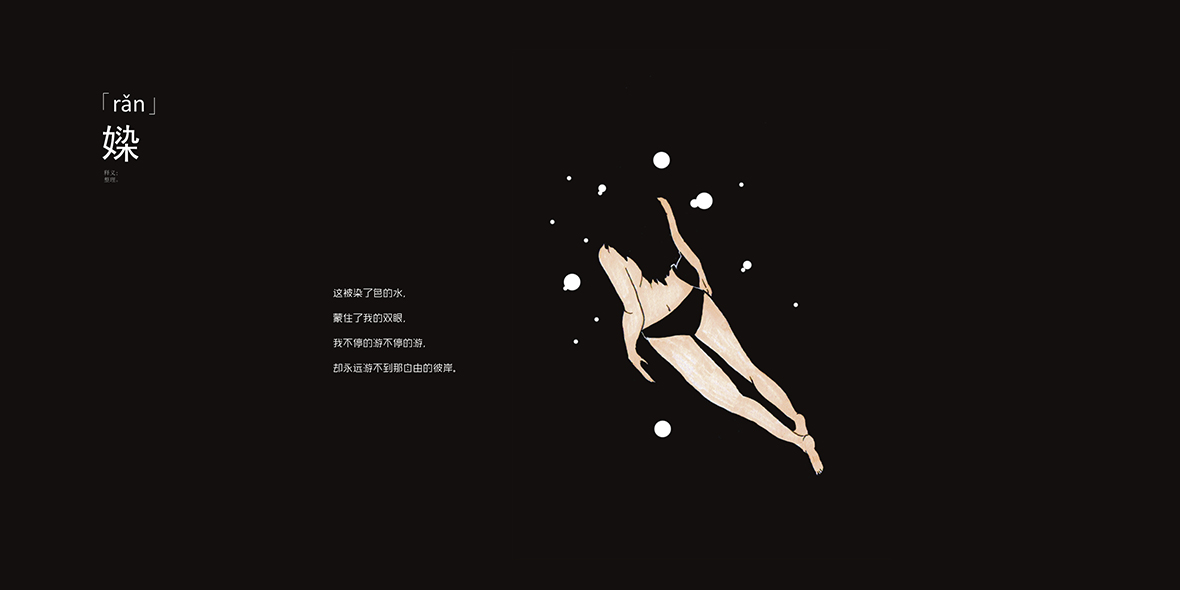 [媣 rǎn] Meaning: Arrange "This water has been dyed, it’s blinded my vision, I keep on swimming, but I can never reach the shore of freedom."

“Throughout thousands of years of a patriarchal society in China, women have depended on their own efforts to improve their positions and gain respect,” Zhang comments. “[…] I believe that to make progress on the issue of gender inequality, we can only begin with ourselves. Only after we realize that the problem exists can we begin to analyze the situation, work at these problems, and begin to implement change.” 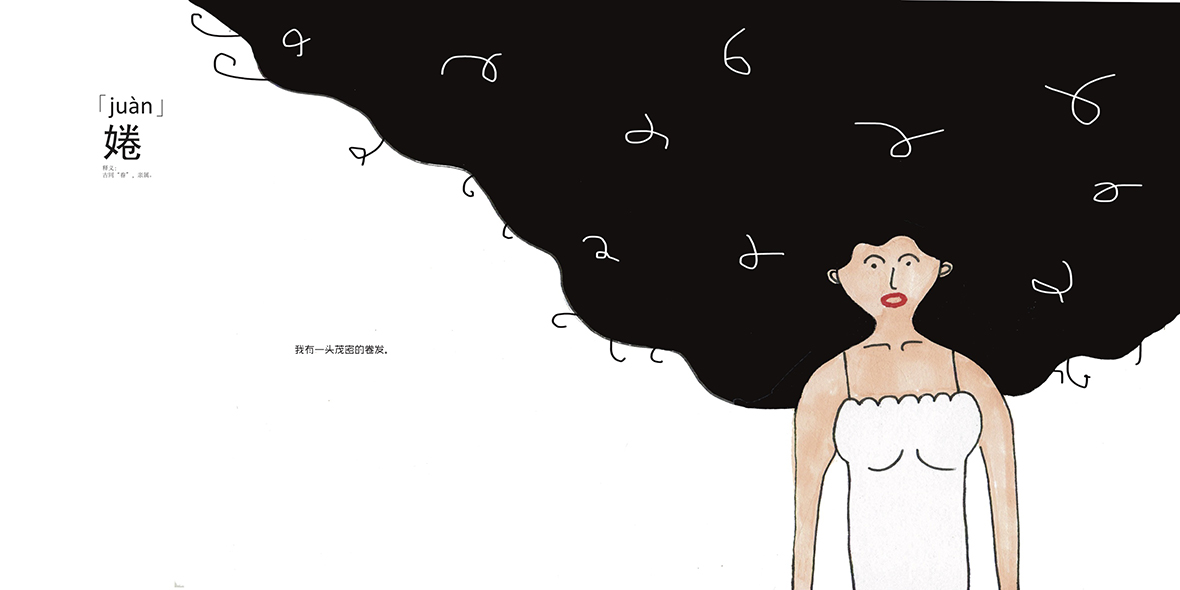 "I have a head full of curly hair."

Although nǚ is one of the most common character components in the Chinese language, a pronoun specifically for referencing females did not become widely adopted until the early 20th century. But does this etymological evolution truly help us advance towards gender equality? Or on some level, is it only widening the divide between men and women?

From the connotative qualities of words formed with nǚ to the late adoption of gender-specific pronouns, a close examination of the Chinese written language is a revealing look at how gender inequality still remains a prevailing issue around the world. 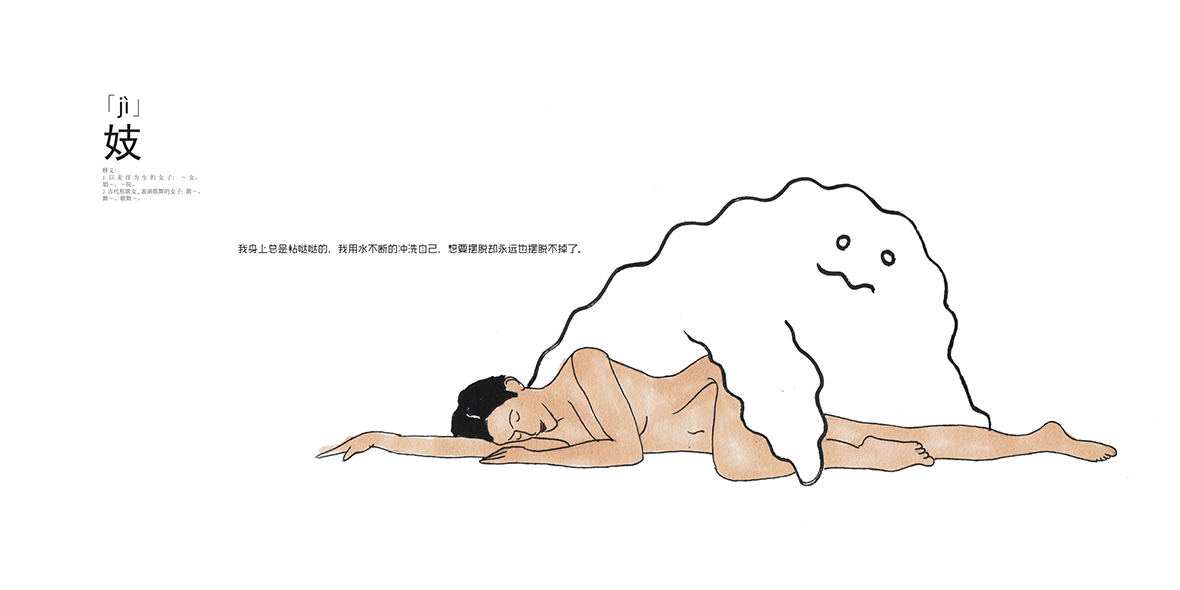 "My body is always sticky and dirty. I wash myself with water but it does nothing." 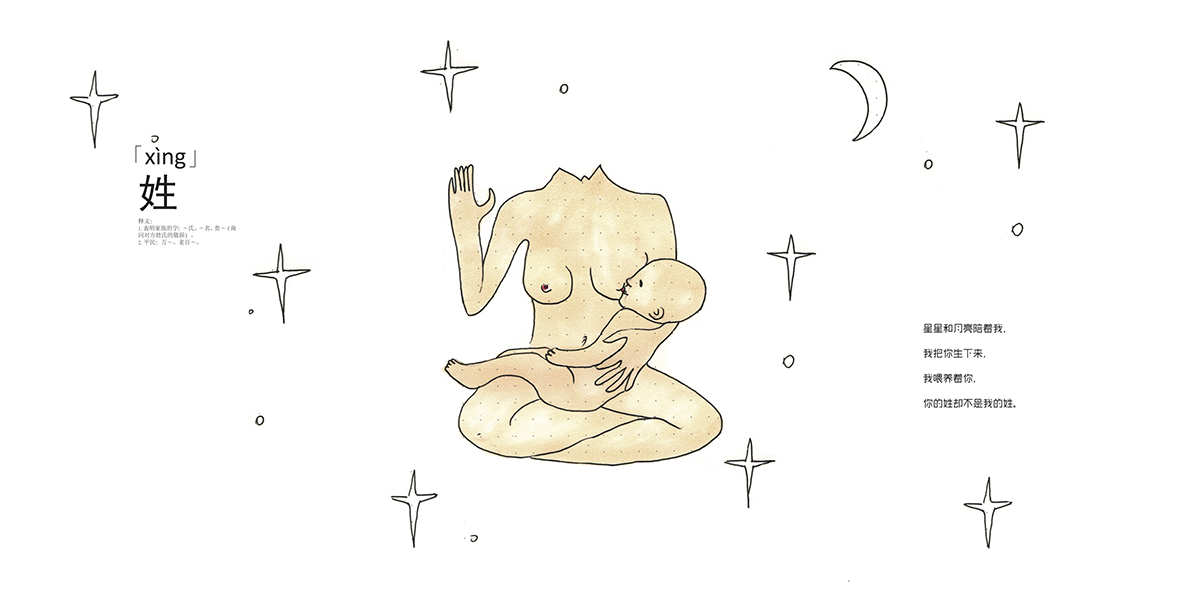 "The stars and the moon are with me, I gave birth to you, I nurtured you, but your family name is not my name.” 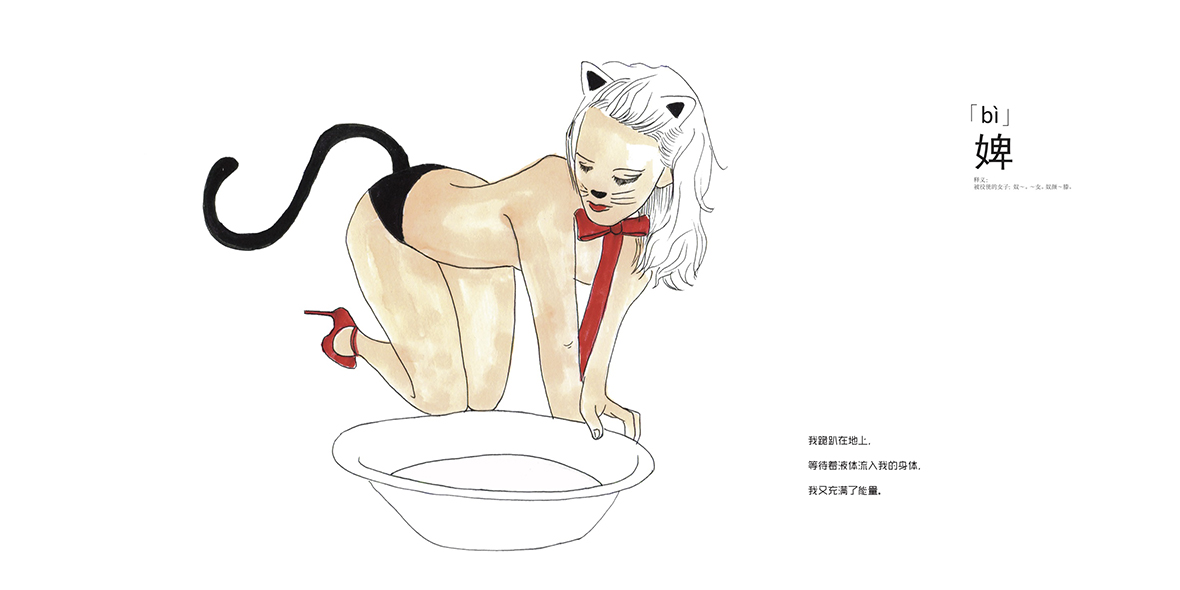 "I lie on the floor, waiting for fluid to enter my body. I’m full of life again." 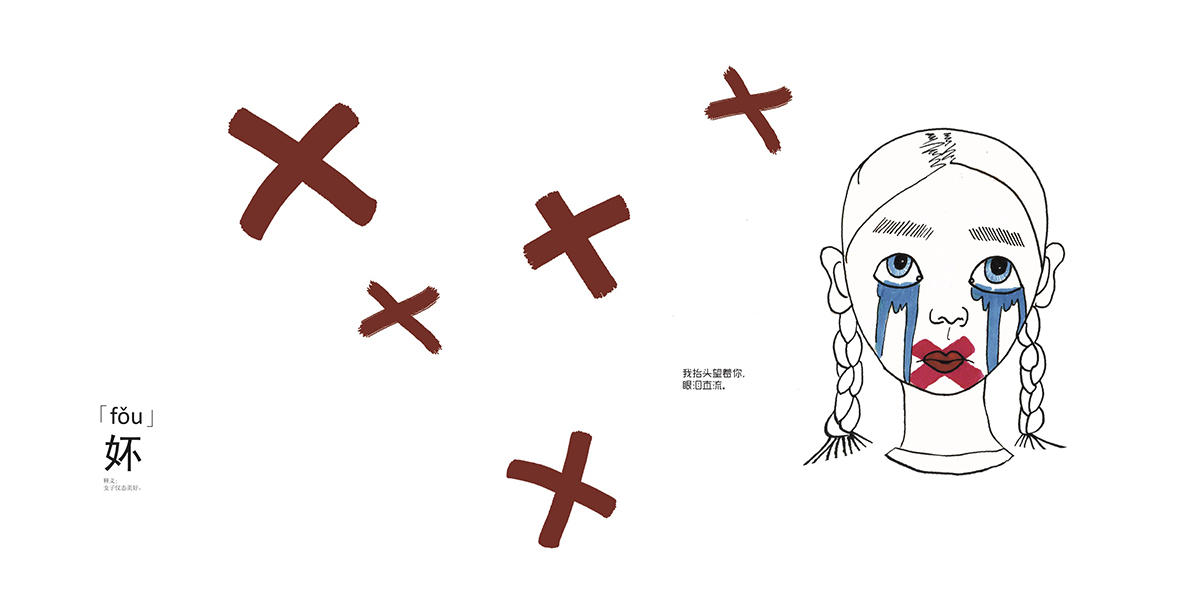 "I raise my head to look at you, with tears dripping from my eyes." 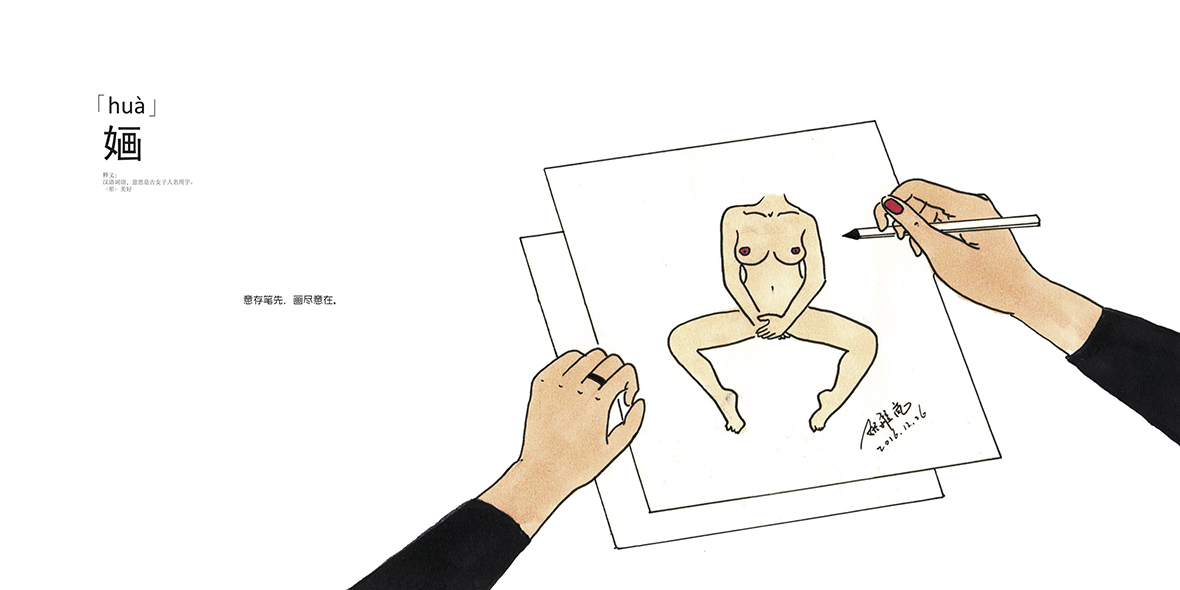 "The meaning exists before and after the pen draws the picture."