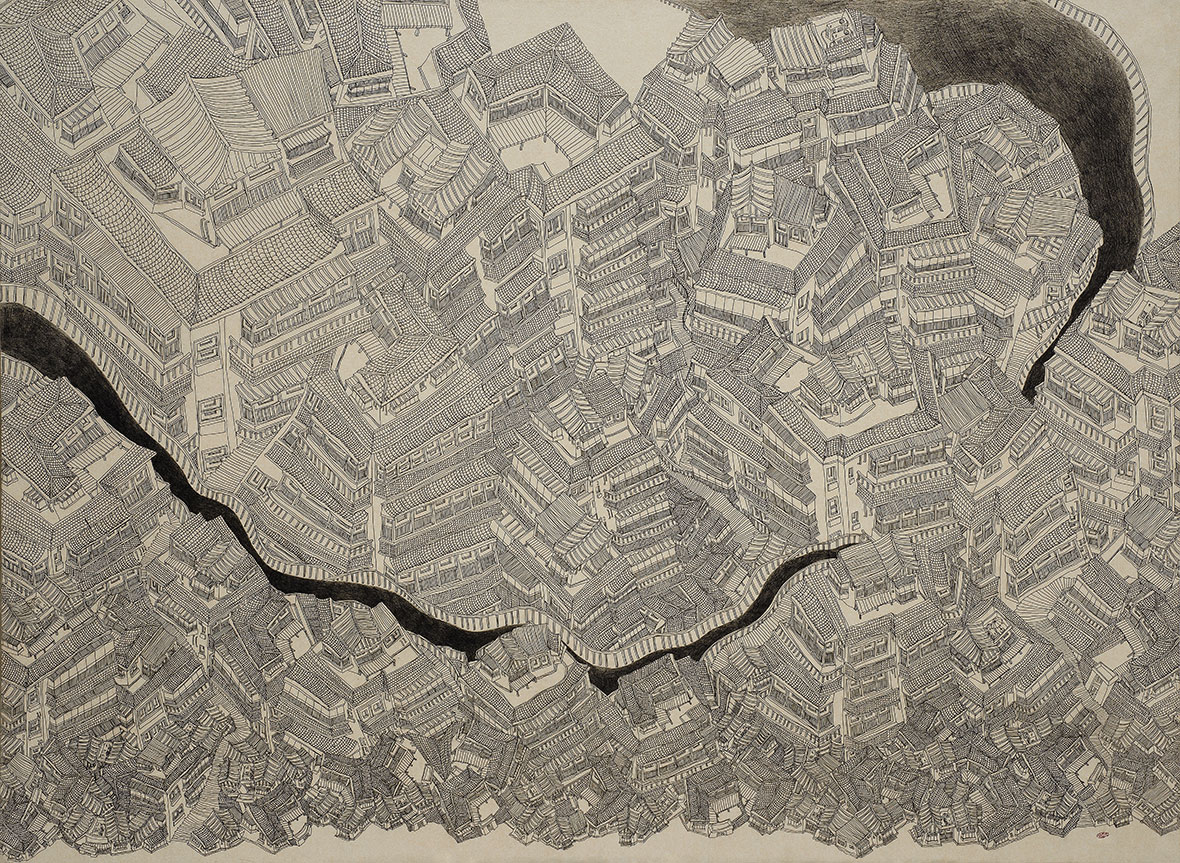 What makes a neighborhood? Is it the people? The buildings? The streets? Korean artist Heo Hyeon-sook would argue that it’s all of the above. However, in her work, she focuses on the built environment as the representation of the human lives that inhabit it. Everyday details of an old home that we may overlook—such as household items, patches of gardens, and visible renovations—are records of the people who lived there and their existence can stretch back generations. “I refuse to see these things as old and obsolete; Iconsider them to be a wonderful archive containing unique stories and history of people from the past,” she argues. 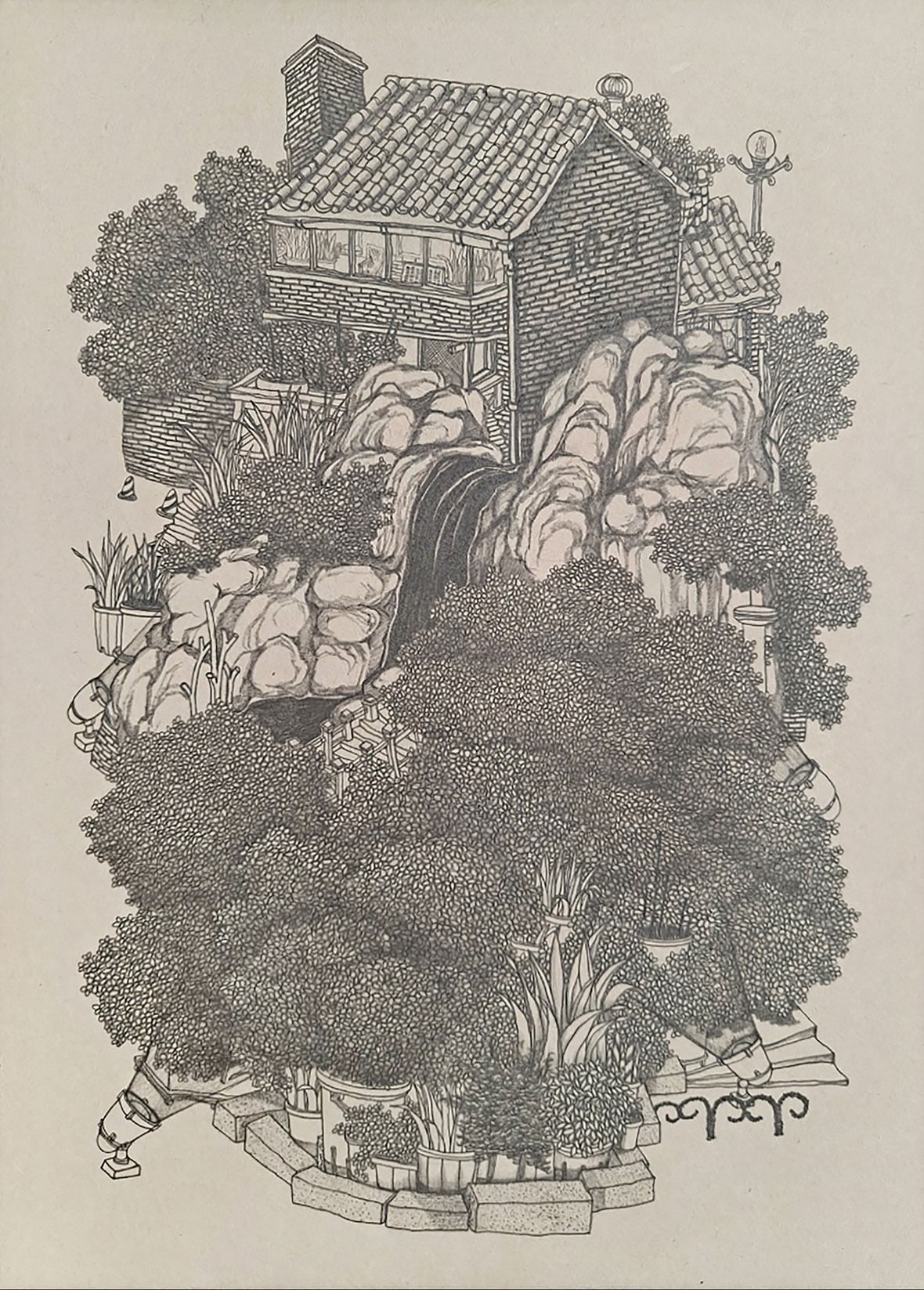 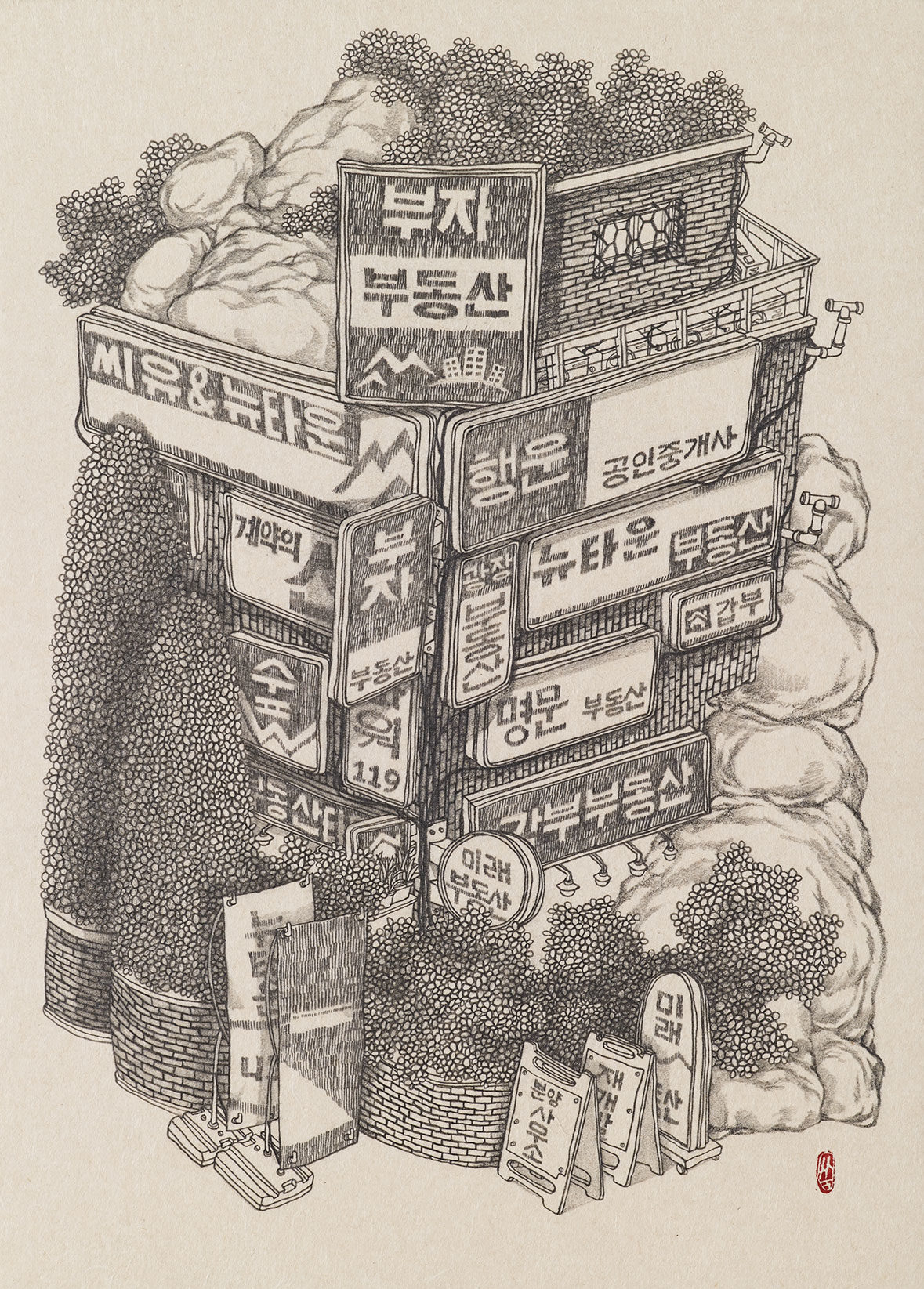 Her illustrations have a surreal feel to them, with buildings teetering in unrealistic ways and climbing up vertical slopes. Walls unfold like paper notes, crowding out any walking space. The areas Heo depicts are actually built into steep hills and the eagles-eye perspective are based on her own observations of city life, but she also uses her artistic license to include more information than our eyes or a camera could capture, such as splaying open a building to show all four walls and the roof all at once. “I don’t want to make a one-dimensional reproduction,” she says. “Instead, I express multi-faceted stories within a single artwork. There are so many stories contained in traces, features and functions of a single house, and my artwork contains all of them at once.” 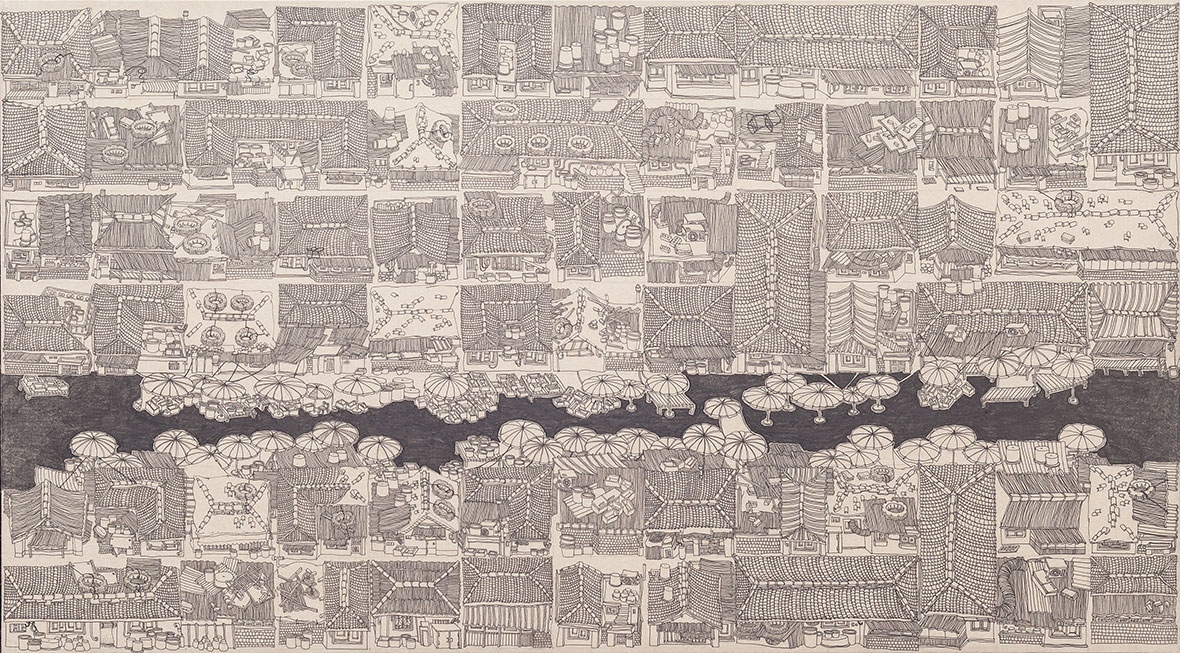 Heo zeros in on communal lives across Seoul, recreating neighborhoods gone or disappearing with pencil on beige Korean bark paper. It looks archival due to the traditional mediums and style, helping cement the recent past and the precarious present in our collective memory. Her work presents scenes of unimaginably dense, low-rise cityscapes in the style of traditional Korean landscape painting to record real and inferred histories at risk of being forgotten forever. Her style commits them to the past, overtly claiming them as historical, but keeps them alive with energy and passion. 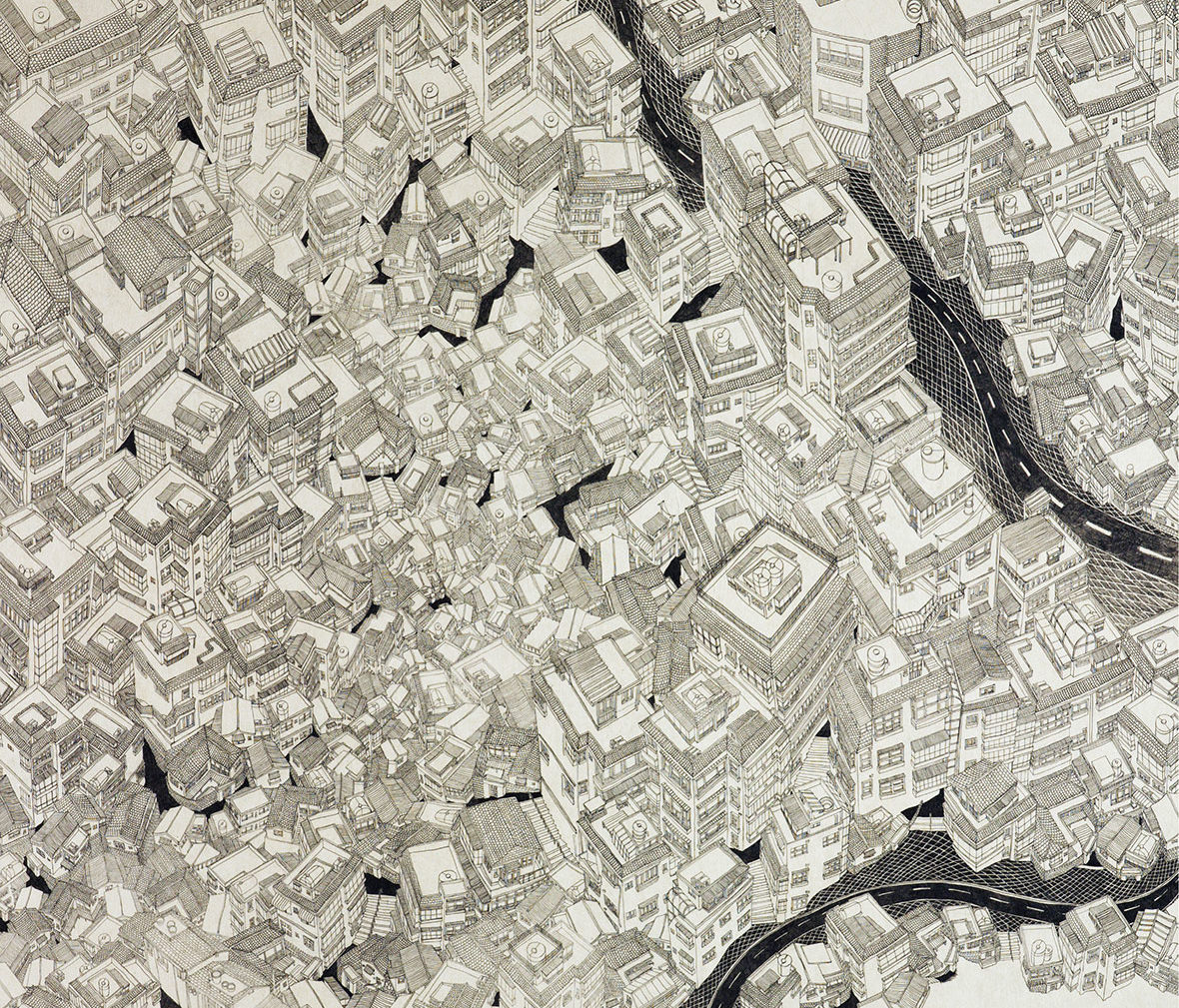 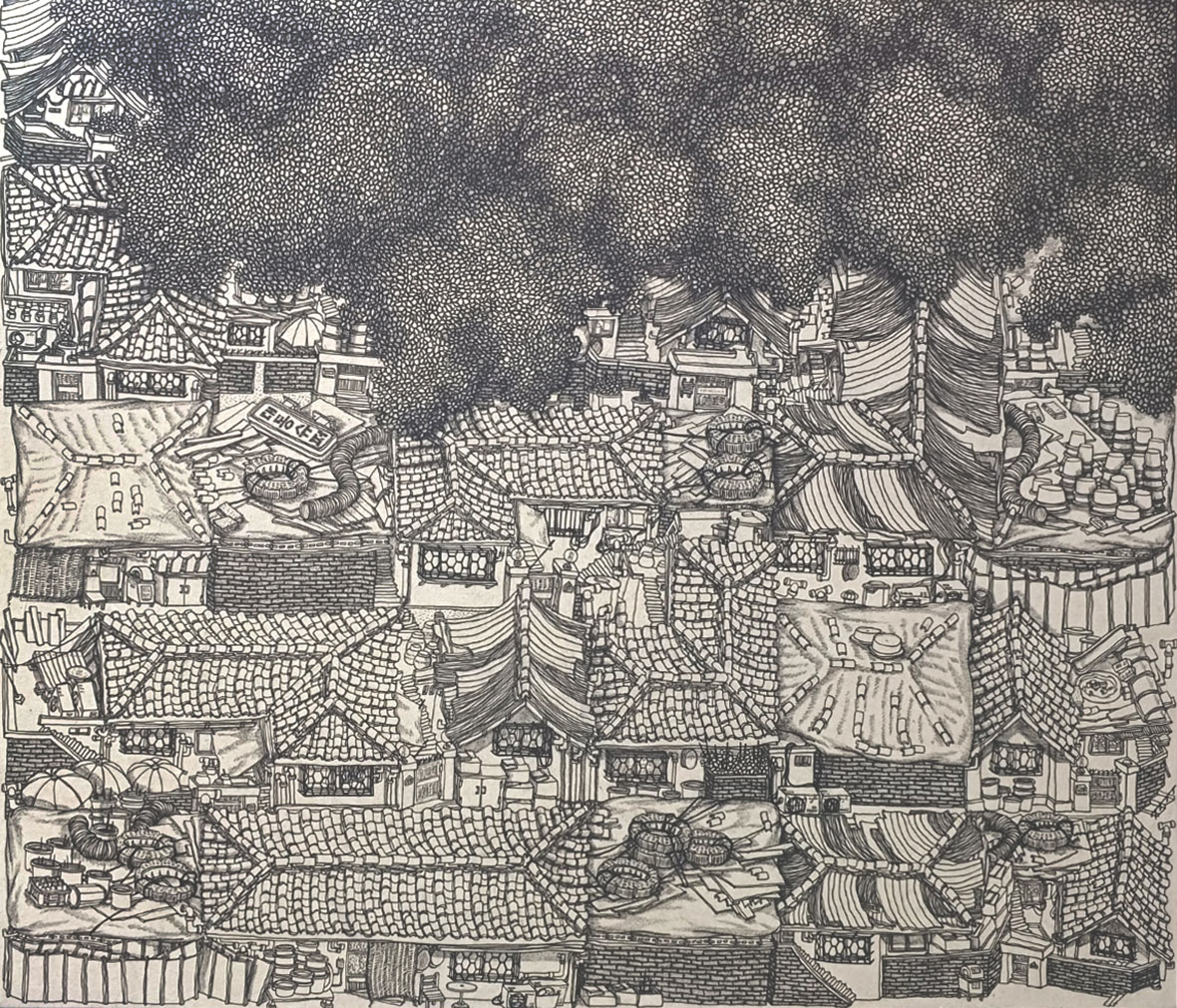 Features of landscape painting, like the characteristic dark mountains and rivers that frame the edges and slide through a scene, are common in Heo’s metaphorical cities. Rivers and identical thoroughfares serve as a gathering space where people can unwind and socialize or shop. The river of her childhood was a place to do laundry and then became a communal park. “The works that I create are inspired by my town, and the river and the road are depicted as an ever-present existence,” she explains. They’re core features. Whereas European and American-designed cities feature large central squares, Korean cities revolved around and grew out of these rivers.

When Heo was just 9 years old, her family of three generations was unceremoniously and forcibly removed from their home, and they had to move a few times after that before finally settling again. She remembers those early years wistfully, surrounded by loving grandparents, caring neighbors, and parents’ friendly coworkers. When her grandparents passed, she realized there were no photographs or documents from her days with them. So she set out to recreate them through art based on memories and imagination.

“I wanted to leave meaningful recordings of my grandparents’ essence with detailed and painstaking reconstructions of their everyday life,” she says. “But I use the spaces they inhabited, rather than realistic portraits.”

As such, her early works are directly inspired by her childhood: The basement level house she was born in, the schoolyard slide she played on and the street market where her father was a vendor. 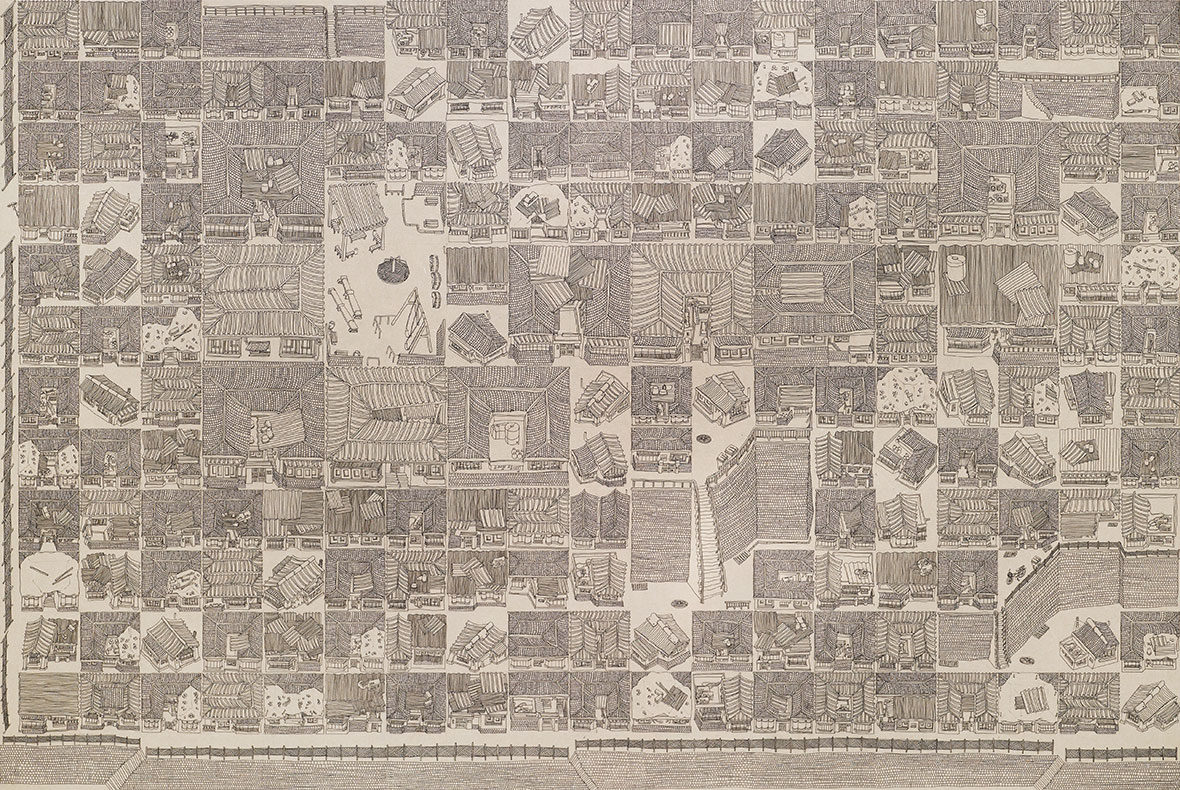 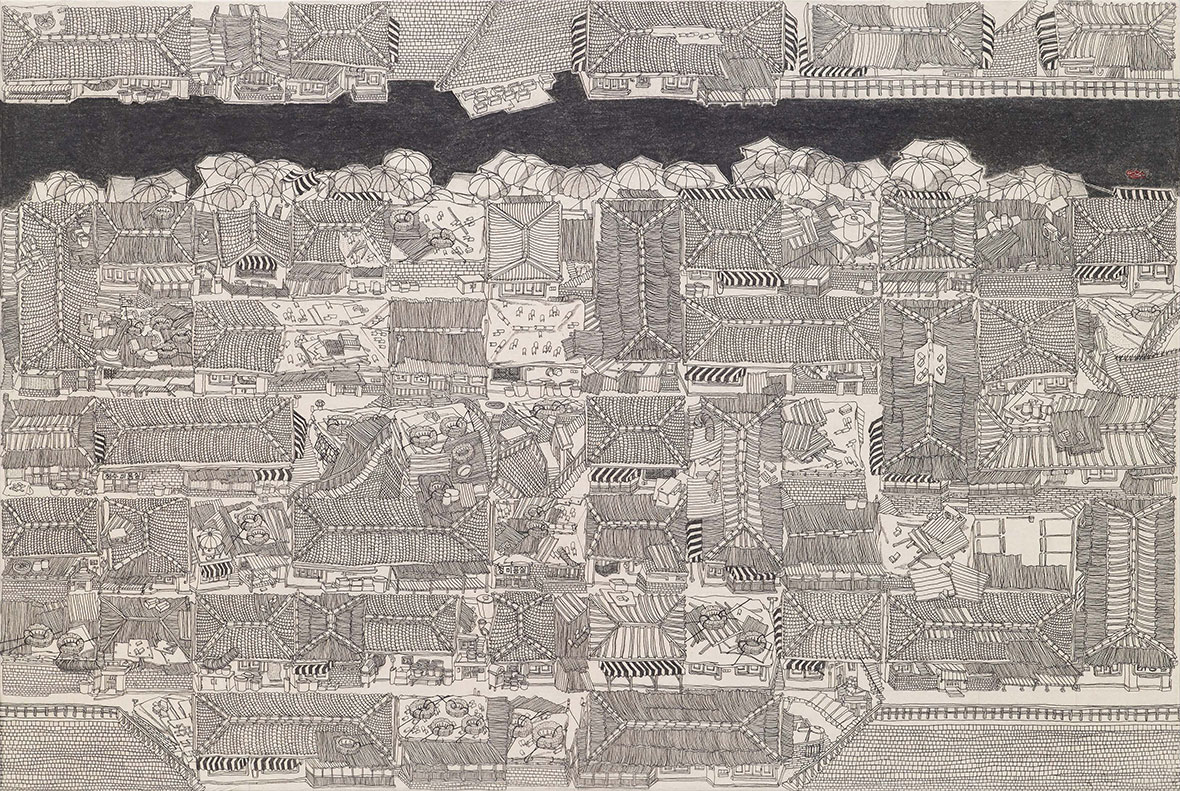 Relying on memories can be a tricky thing and her affection is colored by nostalgia. When you look at Heo’s drawings, the dilapidated buildings and tight alleyways don’t look pleasant. But to her, it was a wonderland of joy, an endless maze of paradise and adventure. The one building still standing from the neighborhood of her youth—located across the street from her current studio—is her old school, which she says felt gigantic but is actually quite small. The playground is now a vacant lot.

“I may have lived in a tiny and not-so-pleasant house with an outdoor bathroom. I may have lived in an alley too narrow for cars to fit through. Yet the mental space that represents my childhood is constructed with fond of memories of my youth,” Heo reasons. “But I feel sorry for having the best childhood imaginable when for my parents it was the absolute worst. The home of my childhood is an edited version of reality; a compilation of the best-of.”

The neighborhood and those who inhabit it were Heo’s extended family. She says her parents were always busy at the factory, and so the woman living above her, the lady living behind her, and the storeowners next door took care of her. “Back then the whole town was involved in raising the kids. The love that everyone in the neighborhood showered me with remains deep in my heart.”

Part of the reason there are no records of those days is because cameras were not widely available in 1980s Korea. “People were focused on survival,” Heo says. “It’s up to our generation, which grew up carefree and in prosperity to record them.” But it’s also because history is written by the victors. “The history of society is really the history of a regime.”

Historic artifacts are remnants of what was enjoyed only by a select few and are not representative of the wider reality. Her childhood neighborhood was clearly not worthy of recording, but she made sure to correct that glaring oversight.

To keep it from happening to others, Heo has expanded her work to include the neighborhoods of others that are threatened by or have fallen victim to similarly rampant development. She explores the city and pours over historical documents for inspiration. The city portraits of her more recent work represent a social phenomena rather than depicting her own life, but they’re still heavily influenced by her childhood experience: “People’s hard work without self-preservation laid a foundation for progress, and they should be remembered and celebrated.”