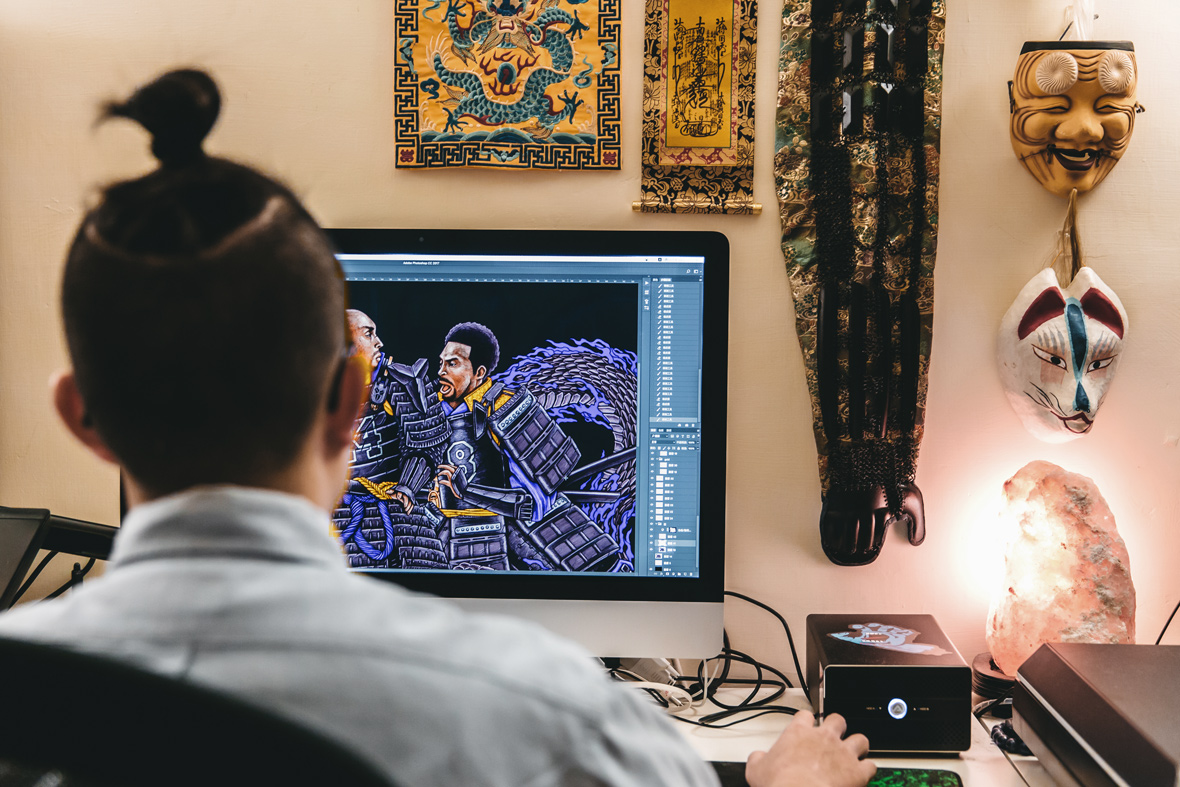 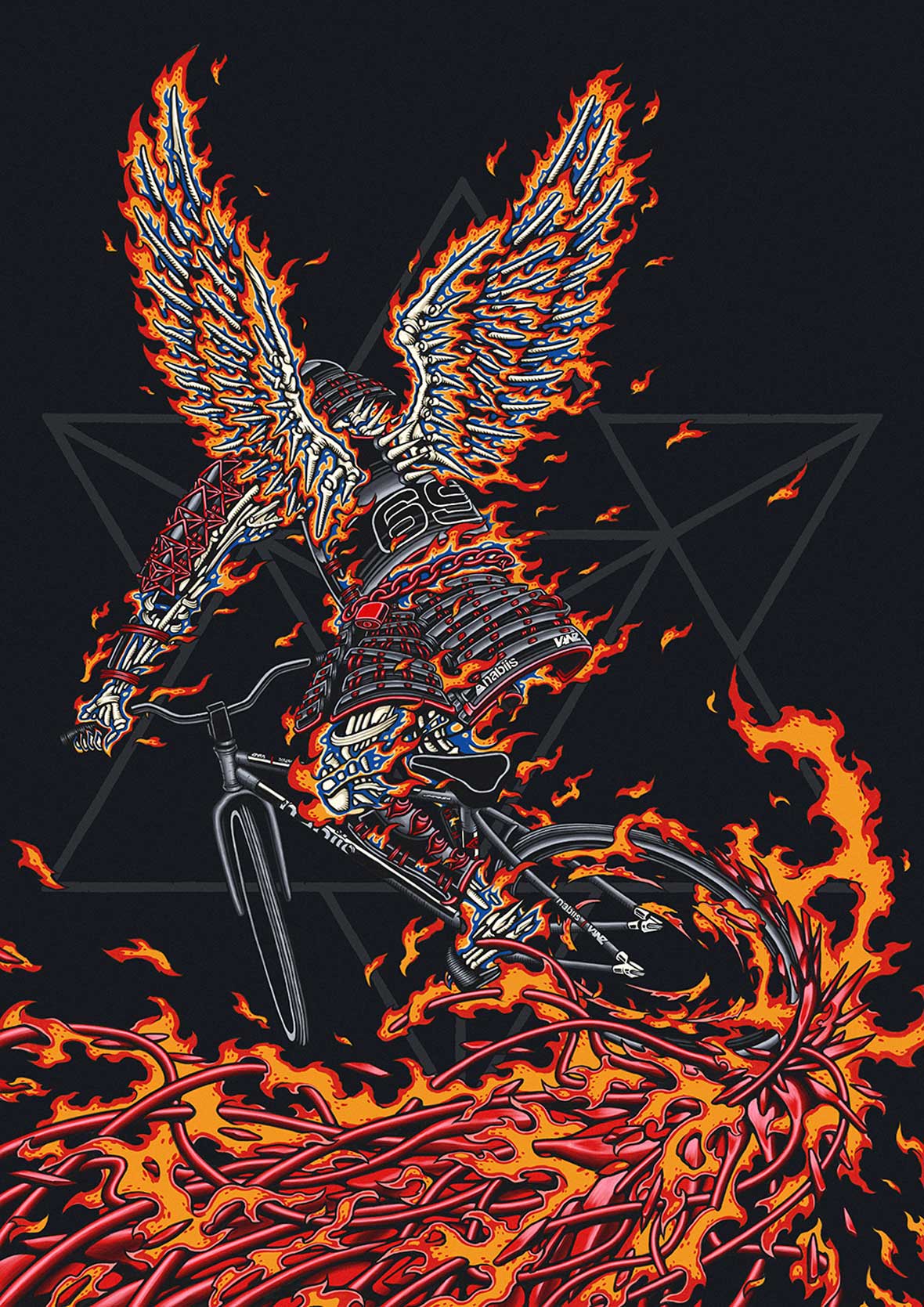 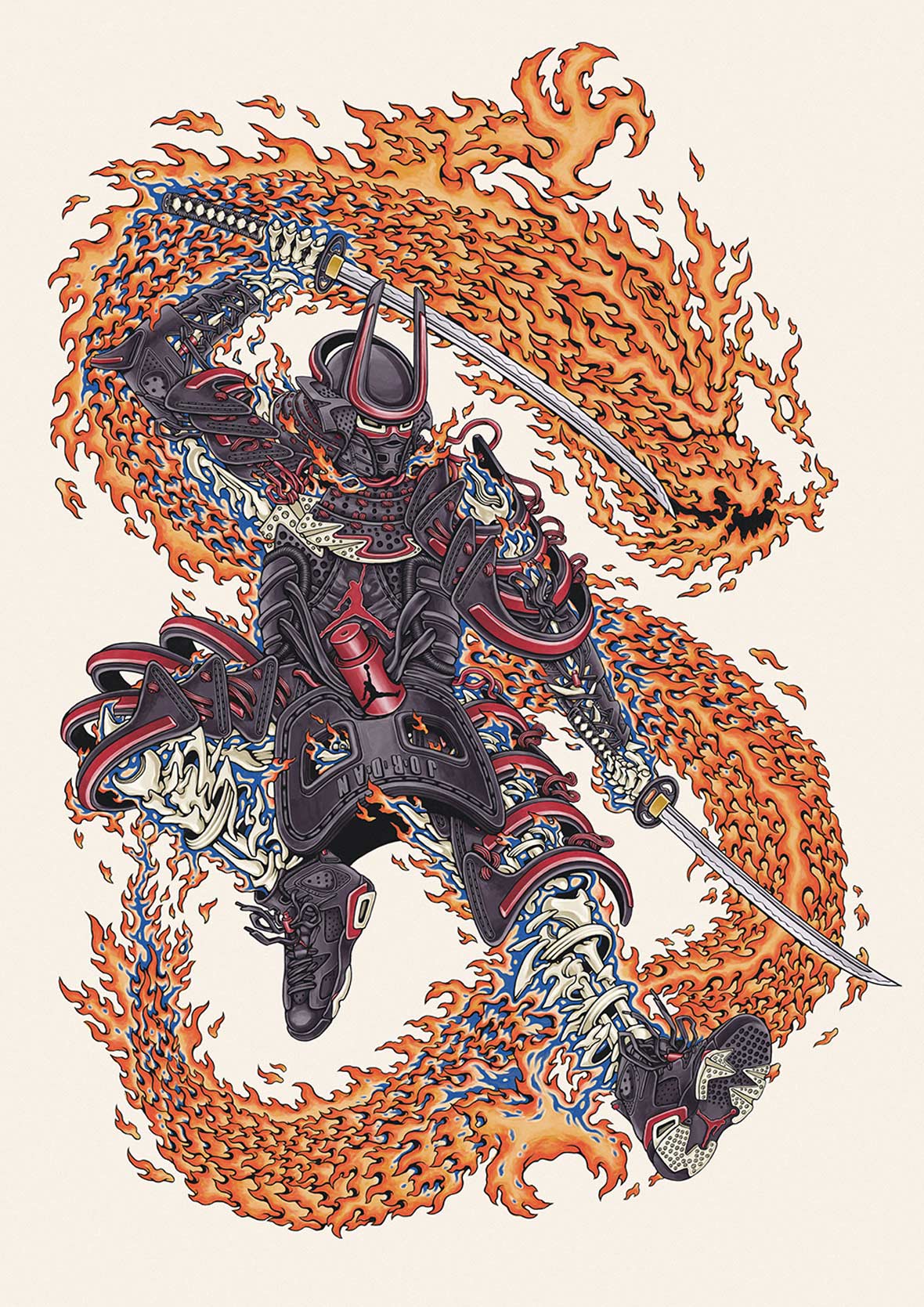 Being someone who’s never bought into the rigorous structure of traditional academic curriculums, Chiang would often absent-mindedly doodle away during class and daydream about being a manga artist. “I’ve never had a concrete plan for the future,” he says with a nonchalant shrug. “My line of thinking was simple: I just wanted to do the things I loved. I’ve been lucky enough to have been able to find a career in something I’m interested in even before I even finished college.” 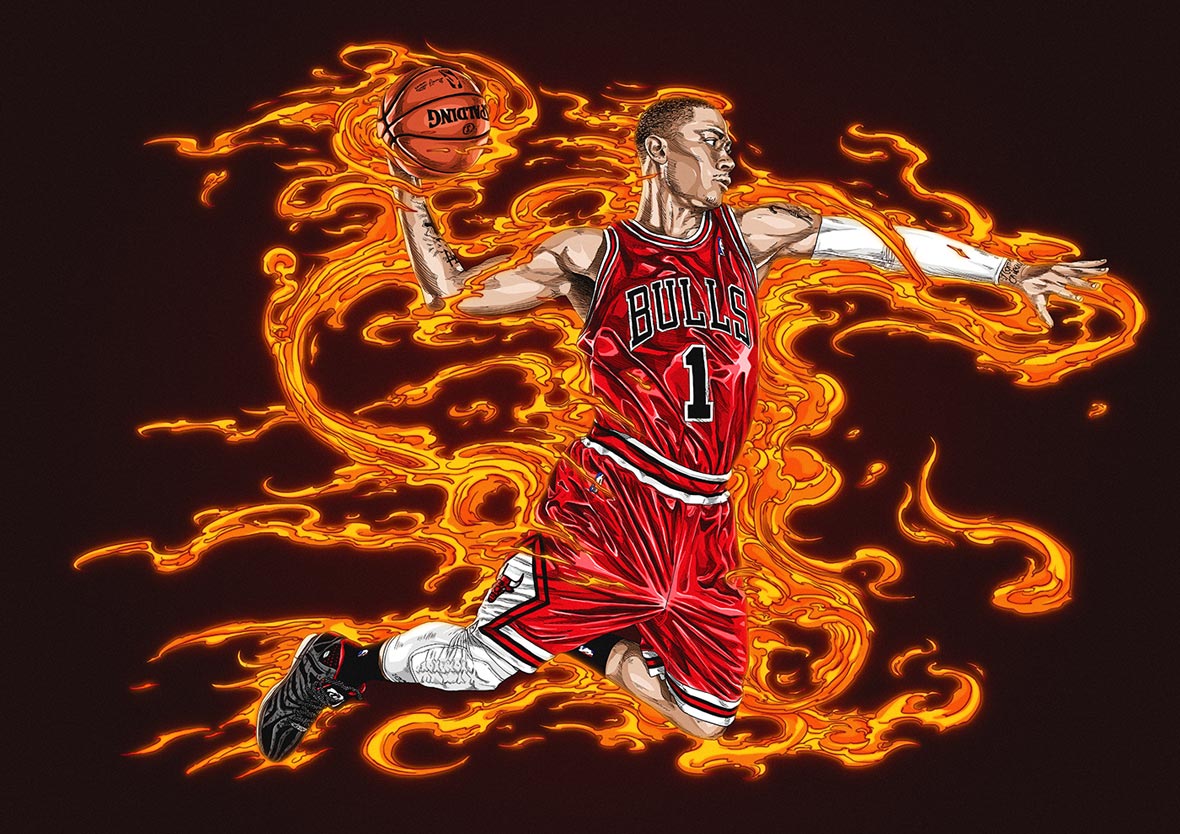 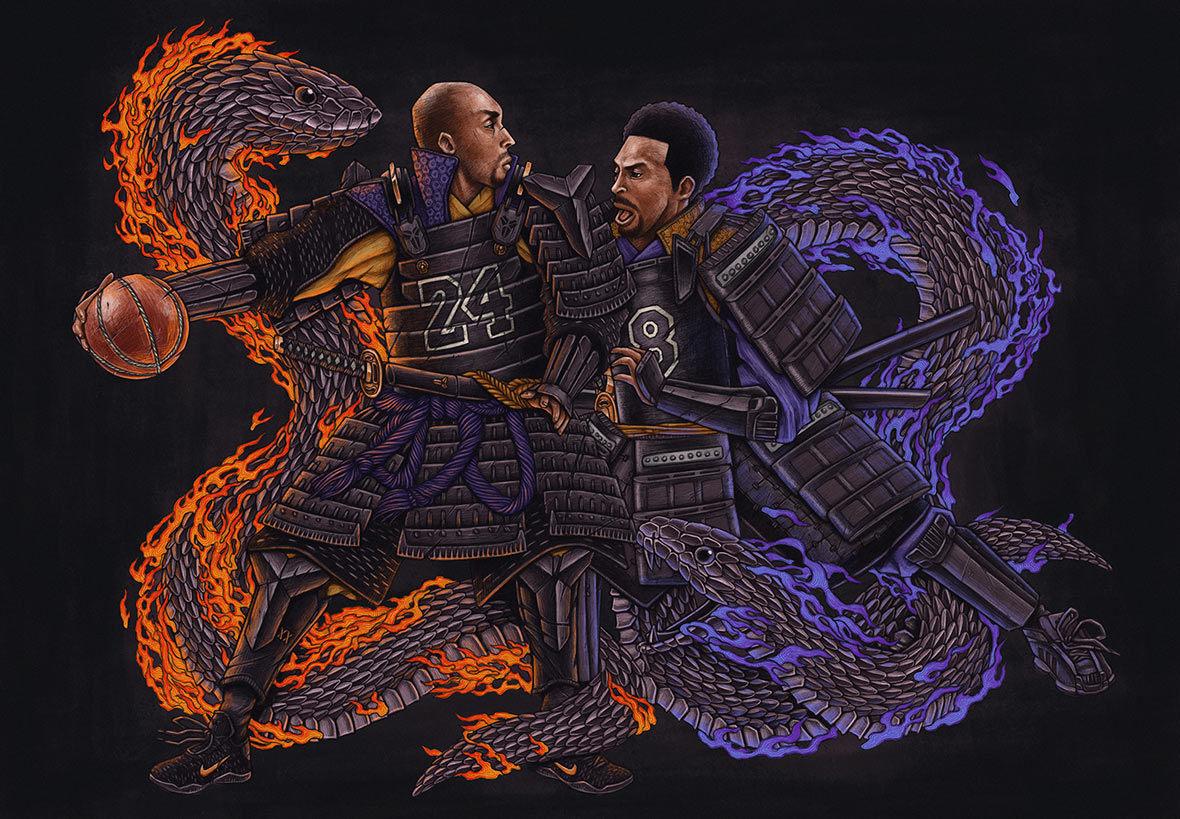 Chiang’s collection of books offers a revealing glimpse into his varied interests and creative inspirations. Inside his Banqiao studio space, his bookshelf is filled to the brim, from literature about skate culture like Thrasher Skate and Destroy: The First 25 Years of Thrasher Magazine and the Supreme monograph to art books like James Jean’s Xenograph and The Skateboard Art of Jim Phillips. But by far, the art books that dominate his shelves are those by Japanese artists. Chiang credits the famous Japanese manga artist Takehiko Inoue as being one of his biggest influences. Inoue is best known for the wildly popular Slam Dunk, a sports-themed manga series about a high school basketball team, and Vagabond, a manga series about a wandering swordsman. The influence from these two series is immediately obvious in many of Chiang’s works. Aside from the illustrative styles, the narratives presented in the manga are equally important to Chiang’s creative processs. “The manga series I enjoy reading are usually ones that explore human nature and the meaning of life,” he comments. “I suppose that might be because I’m quite introverted and often like to overthink.” 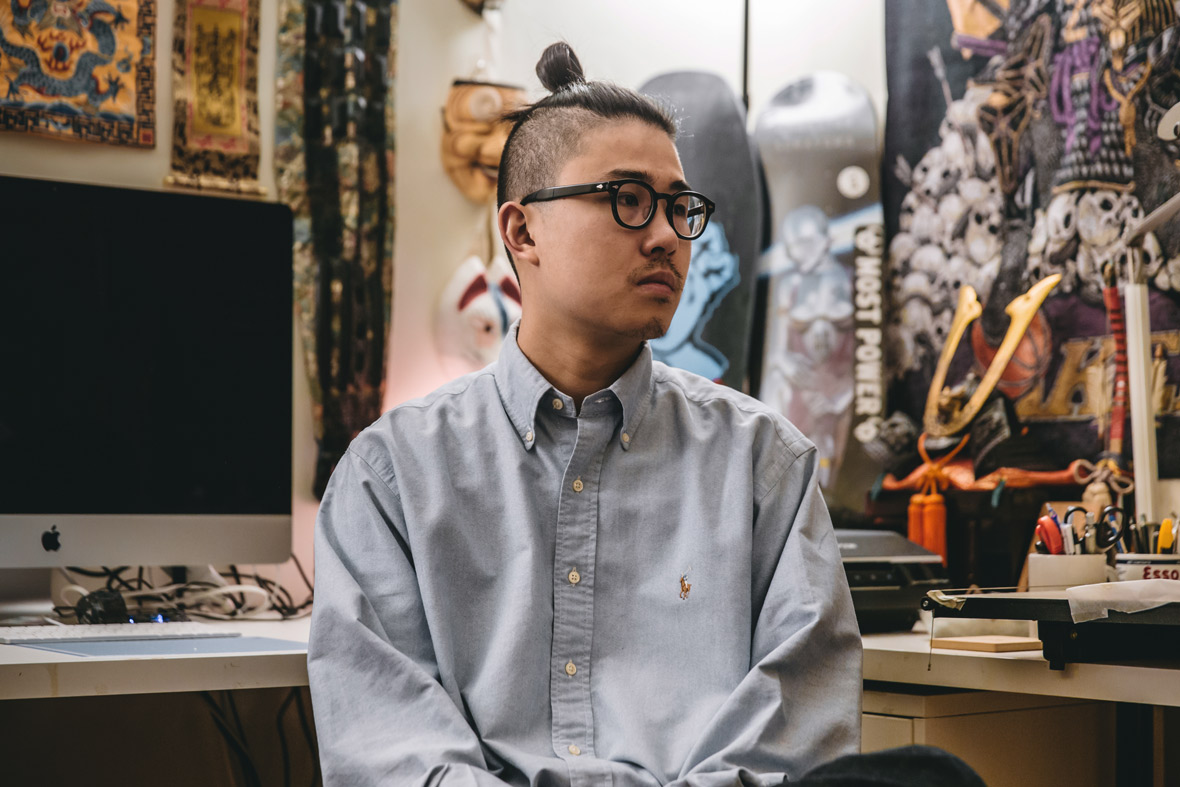 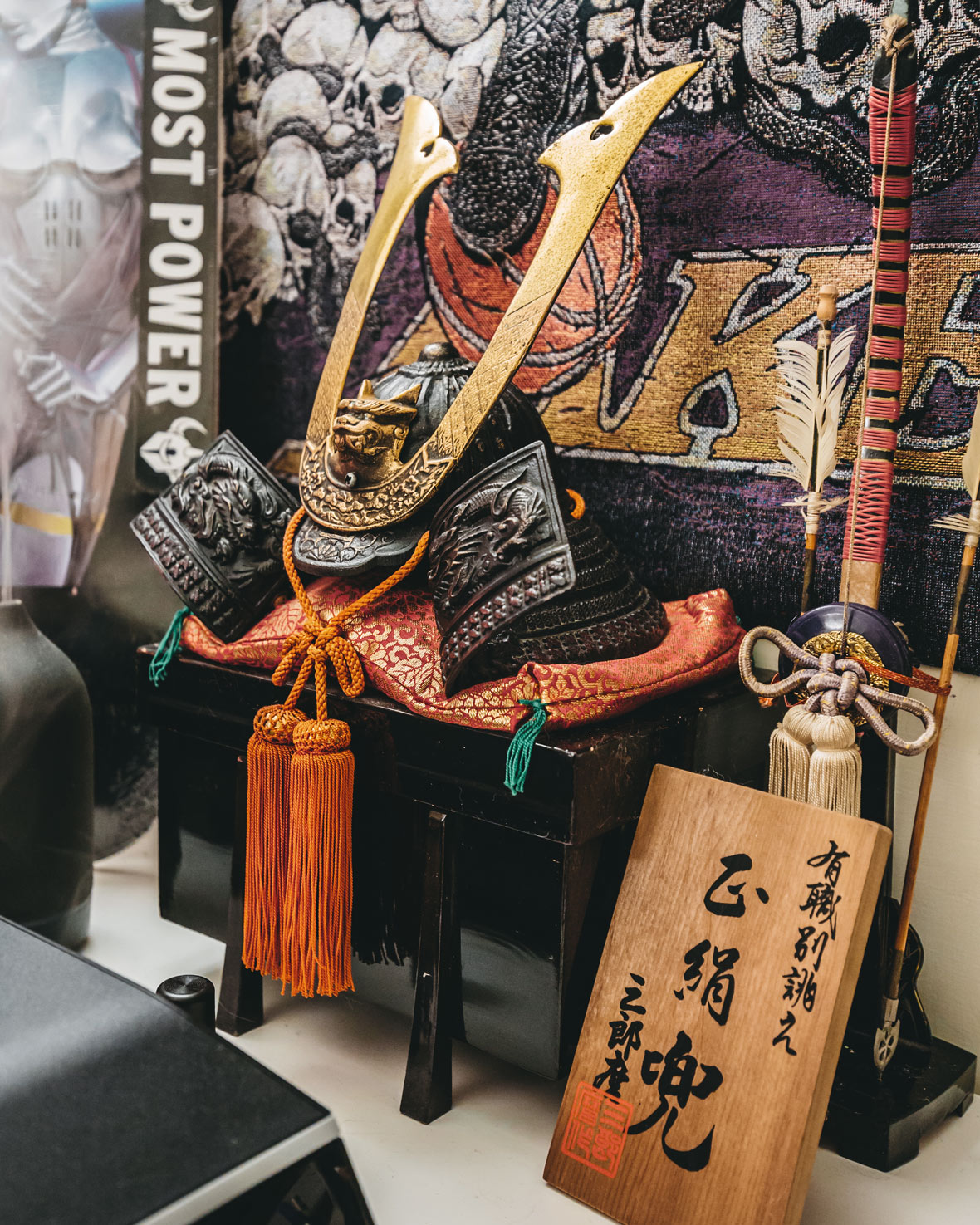 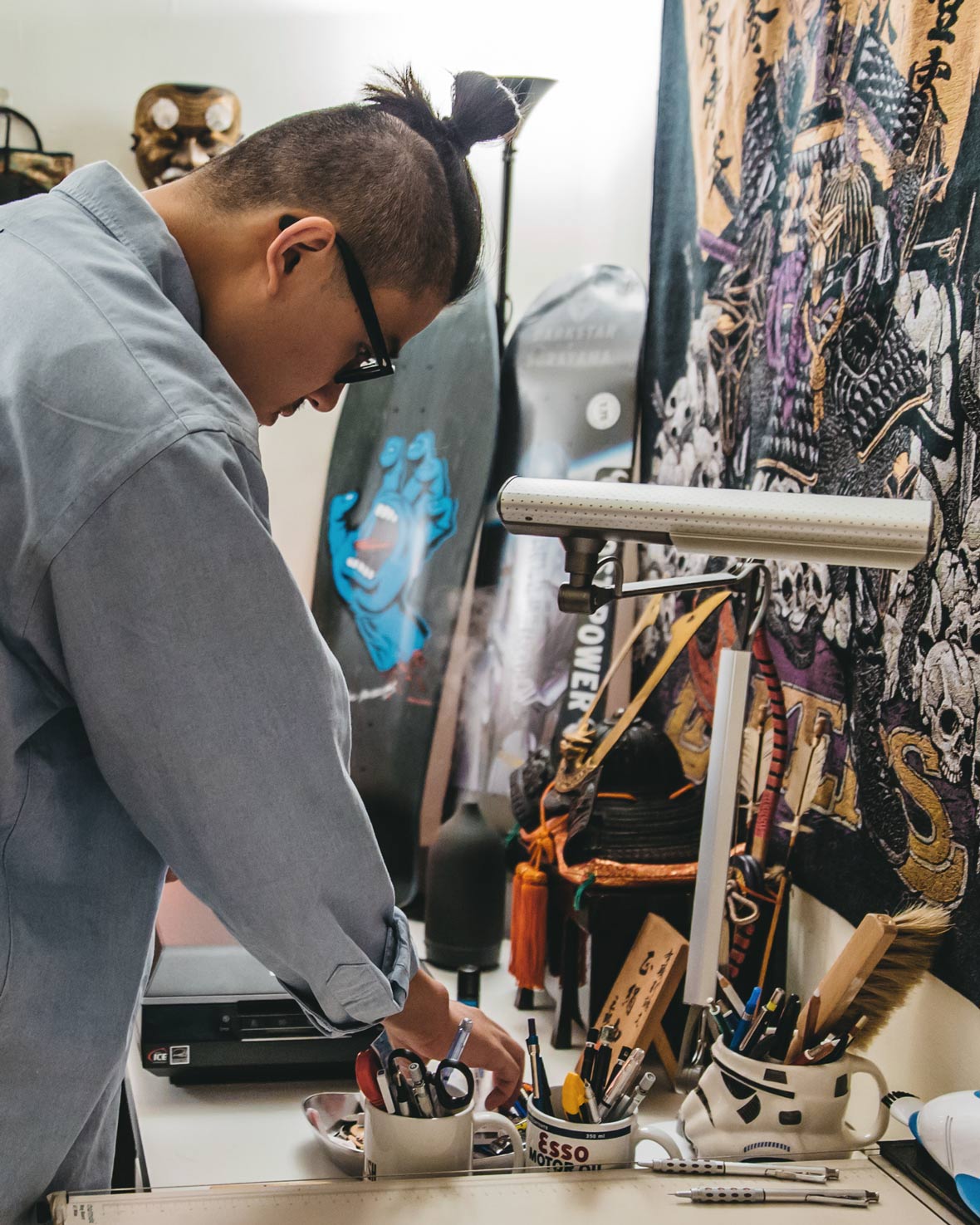 A closer look around studio reveals the full scope of his love of Japanese culture: various Japanese paraphernalia – such as oni masks, samurai helmets, and even a katana – decorate the workspace. “I like things that are intricate and mysterious,” Chiang explains, motioning towards the sheathed katana on his desk. “Many aspects of Japanese culture fit these two criteria. But I like Western armaments as well. Their heavy armor and bulky weapons still possess an inherent beauty. Japanese weapons are still my favorite. Katanas are elegant and simple, yet so powerful. Japanese armor is also beautiful and well-designed. 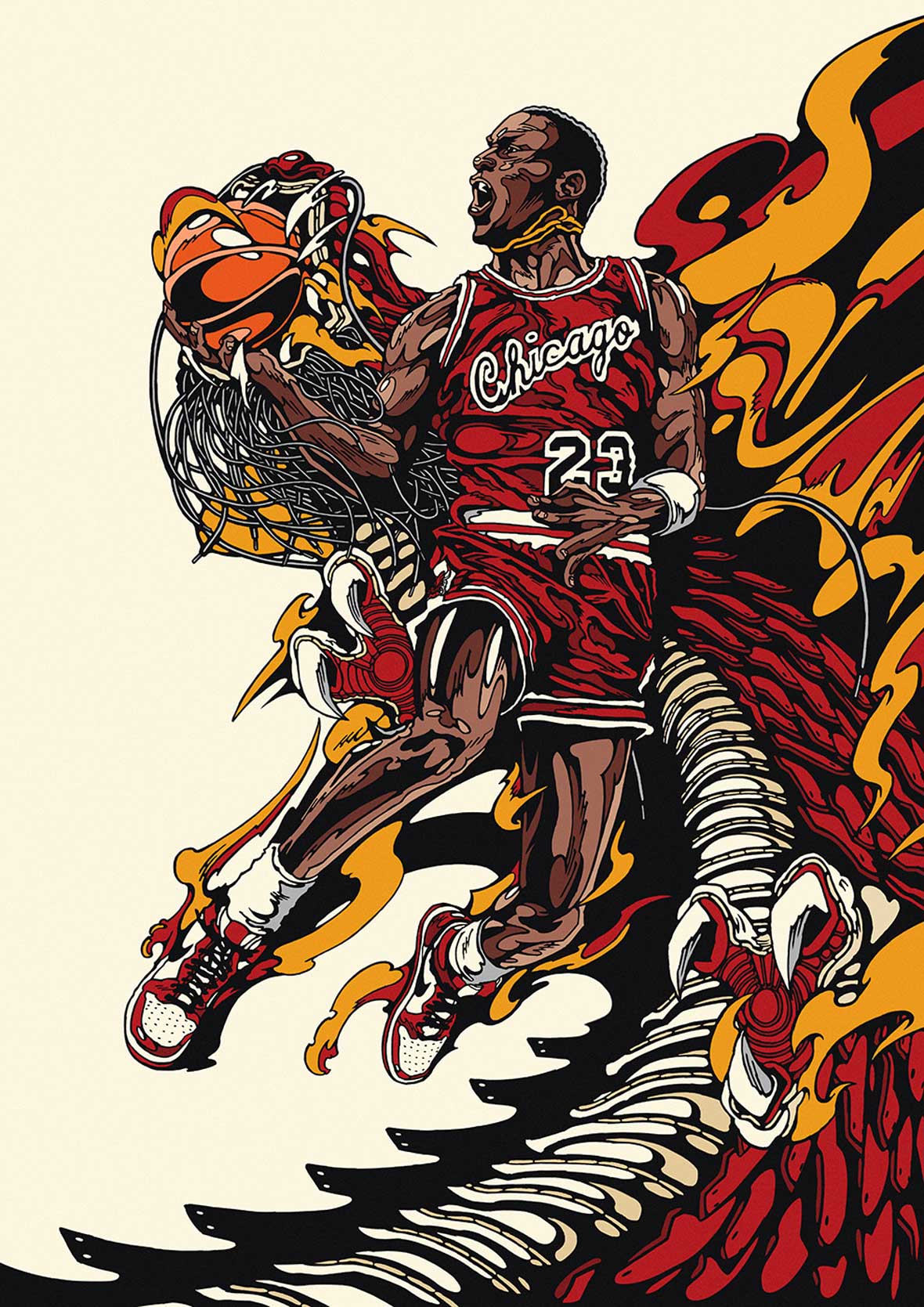 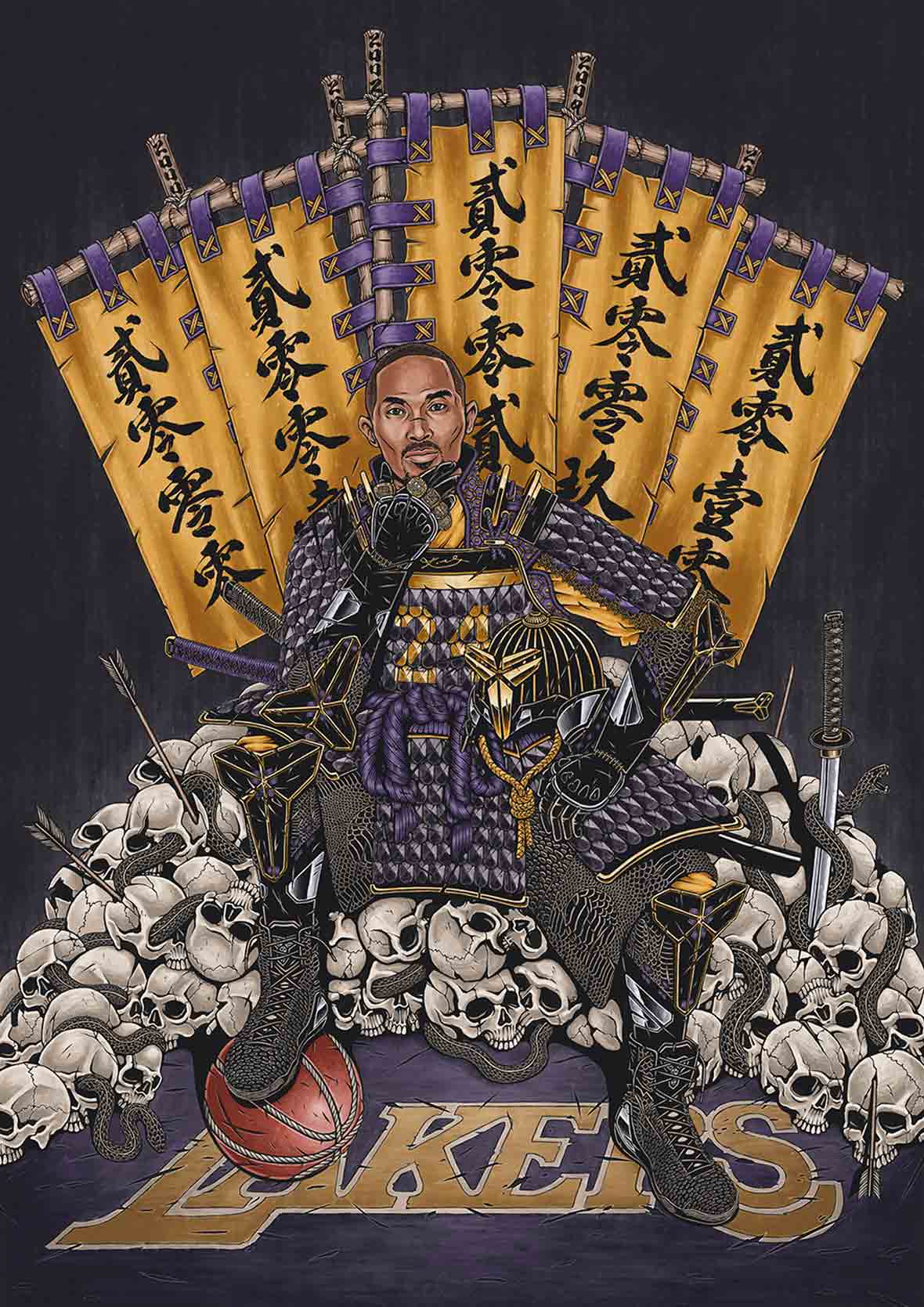 Though perhaps not as readily apparent as the influence from Japanese culture, Taiwanese culture also plays a role in his creation process. “The temples of Taiwan, which can be found almost everywhere, definitely influence me,” he says. “I’m inspired by the architecture and the artistic details of the deities. I also love dragons, which are present in almost every temple. If I pass by one, I’ll often stop and take in all of the work that went into the details.” 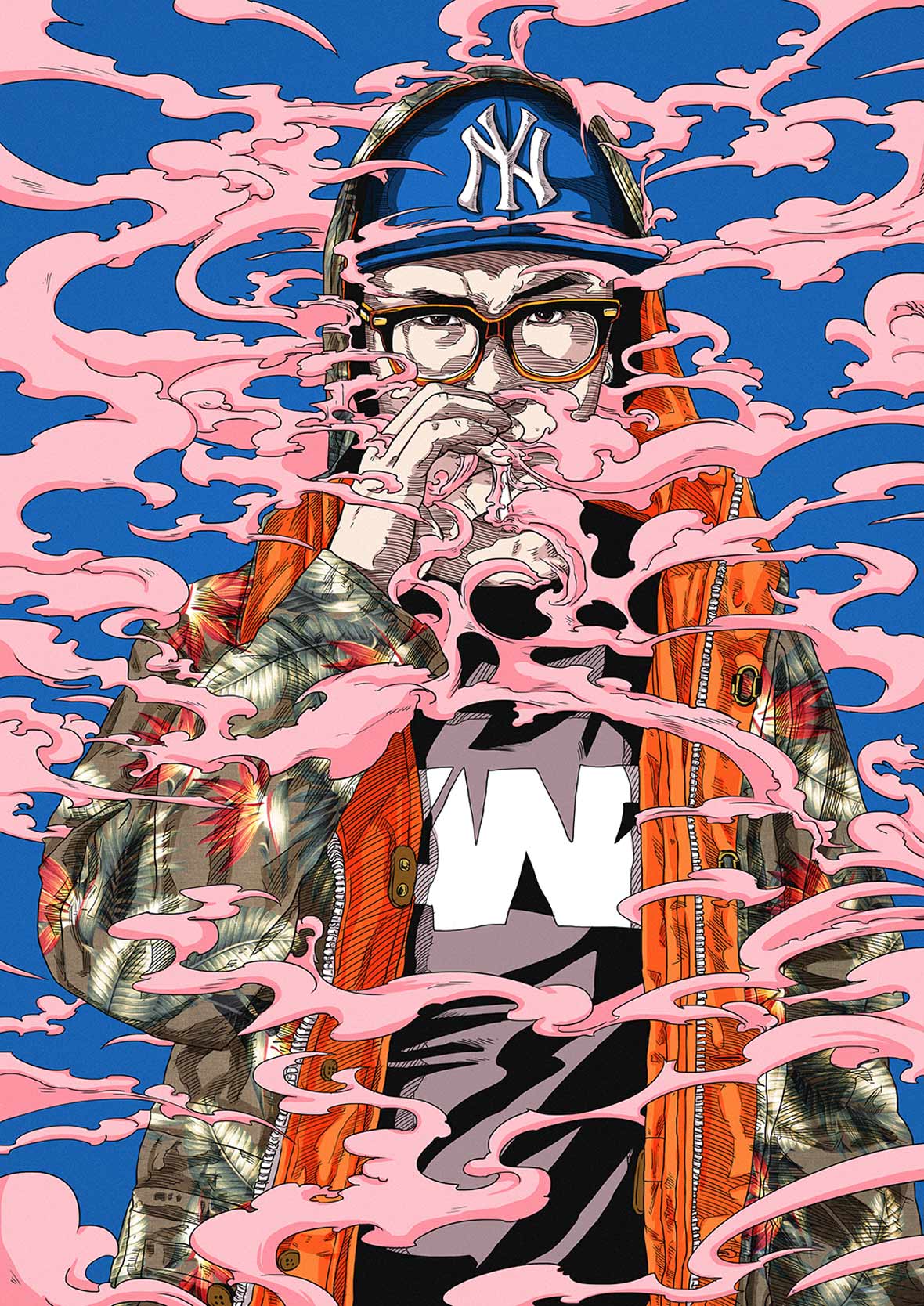 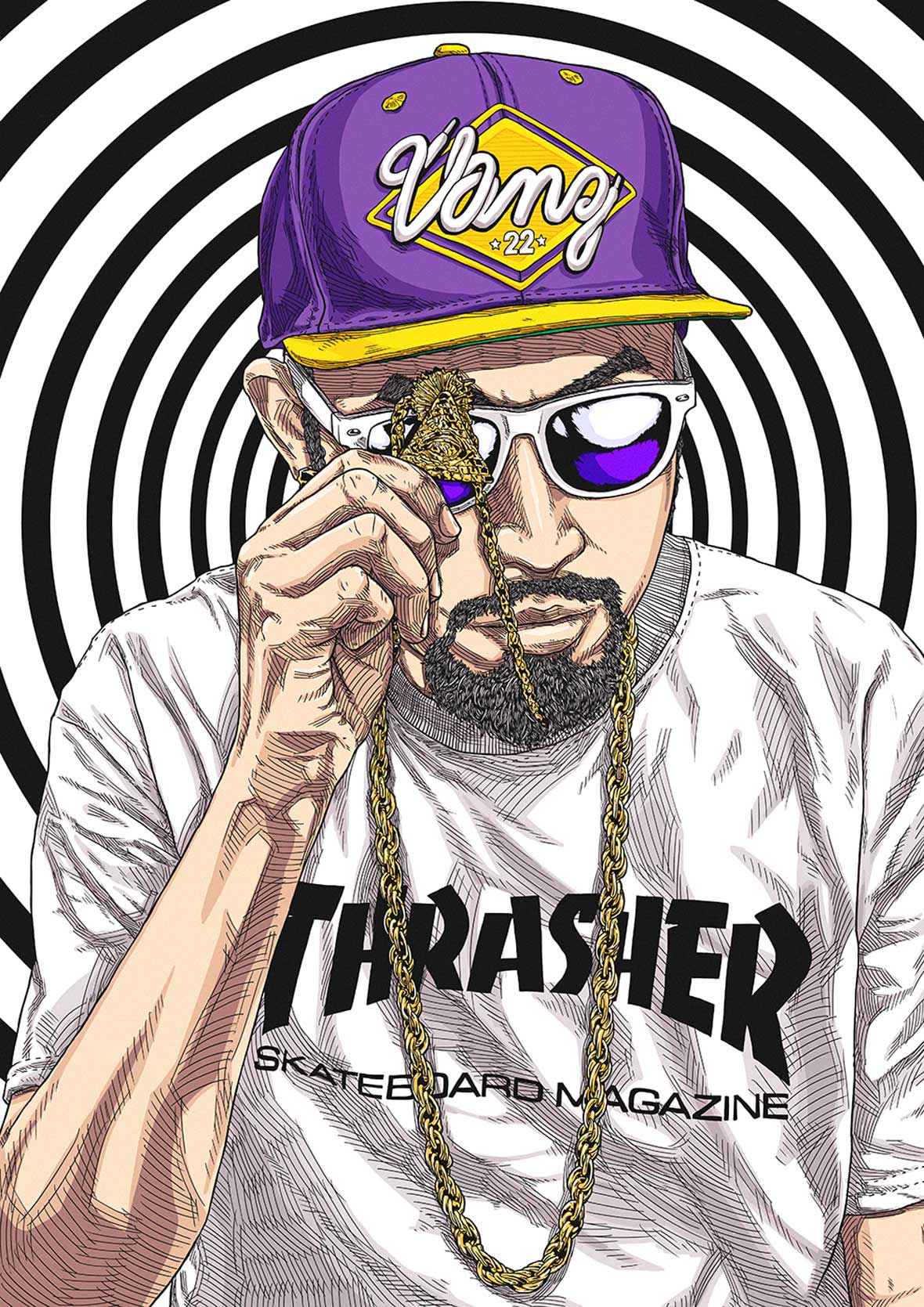 In recent years, Chiang has invested much time and energy into collaborative brand projects. In 2017, he plans to readjust his focus and produce more art for himself. He’s currently in the preliminary stages of planning an exhibition and is in discussions with a few galleries. As Chiang pencils in additional details onto a new Monkey King illustration he’s been working on, he eagerly says, “I’m really looking forward to opportunities for showing off more of my personal artworks this year.” 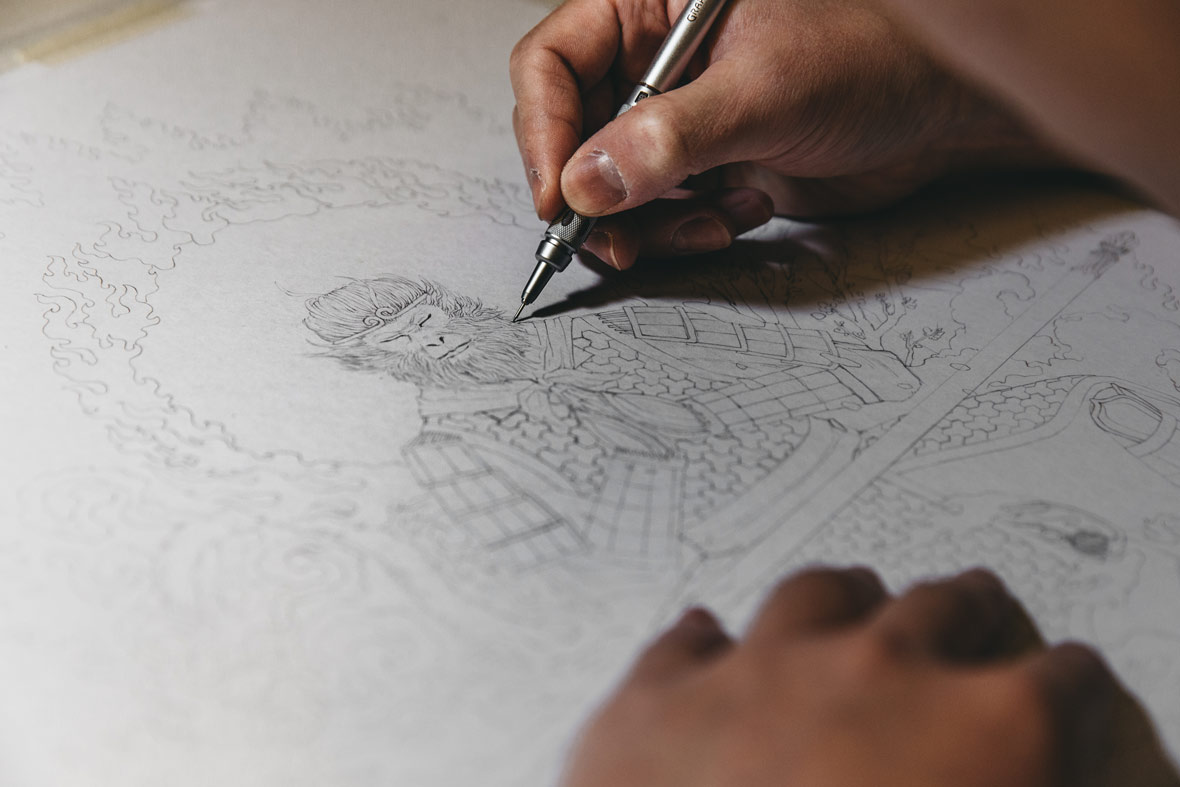