Netflix’s Squid Games has ignited a creative spark in people around the world. The unprecedented popularity of the Netflix hit and the strong visual motifs that define the show have inspired Halloween costumes, countless YouTube videos, and much more.

Similarly influenced by the show is Hu Yujia, a Chinese chef who’s made a name for himself as an “onigiri artist.” In a recent series of Instagram posts, he presents iconic characters from the show using nothing but raw fish, roasted seaweed, and sushi rice. For those familiar with his work, this isn’t anything surprising: pop culture has long been a topic of fascination for the imaginative taisho. 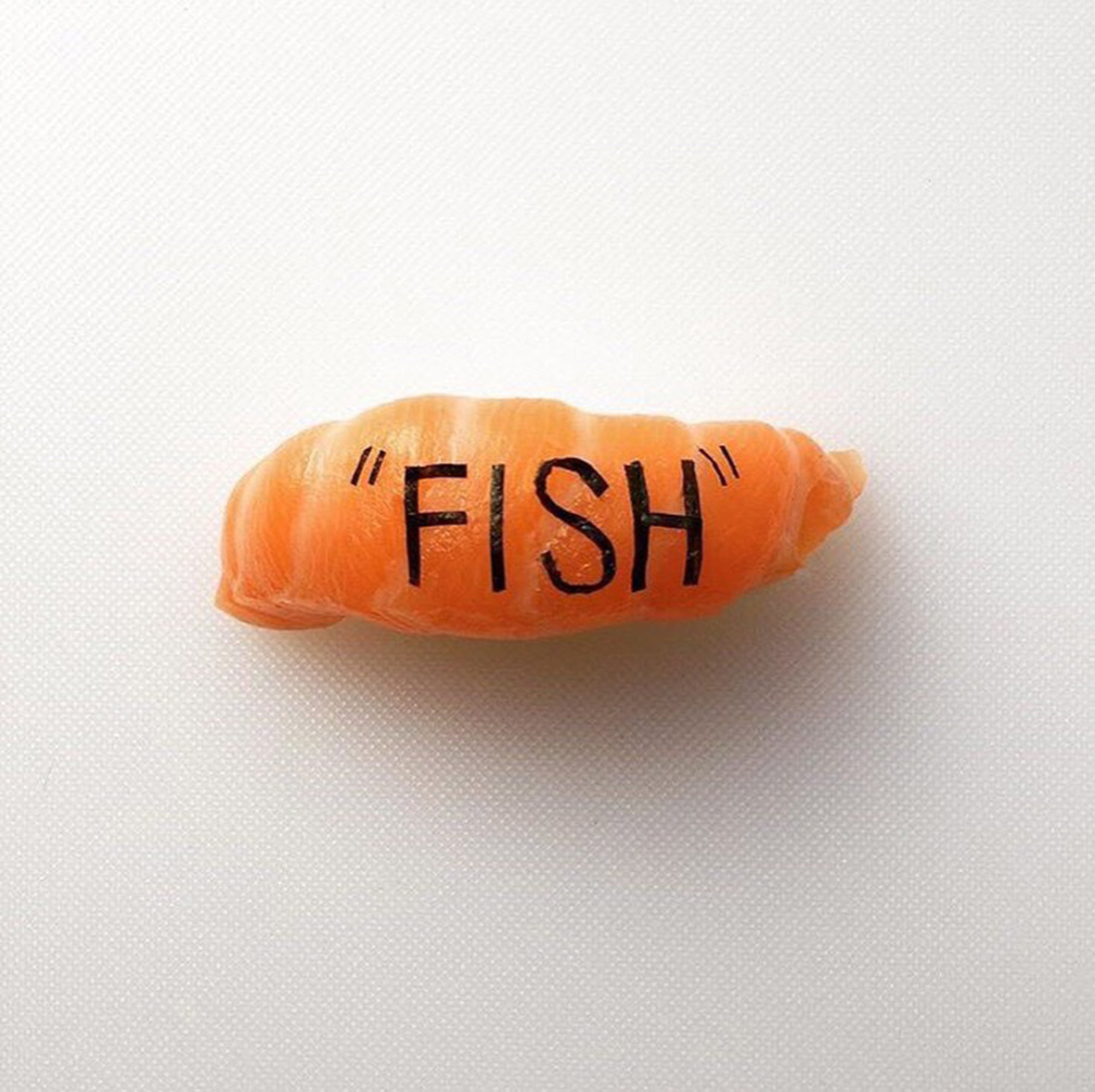 Hu was born in Wenzhou, a city in China’s Zhejiang Province. He was raised by his grandmother while his parents moved to Europe in search of better opportunities. At the time, migrant Chinese in Italy often followed one of two entrepreneurial paths, either running clothing factories or Chinese restaurants. Hu’s parents settled on the former. “My parents got into the garment business early on in Milan, and when I was 8 years old, they decided I should move there with them,” he recalls. “Ever since then, I’ve called it home.”

Even as a kid, Hu’s creative spirit shined, and his artistic inclinations landed him a spot at a prestigious art high school in Milan. He intended to graduate and enroll in an art university, but that plan was derailed.

“Older-generation Chinese parents believe that working hard is more worthwhile than being book smart, which is the case with my parents,” Hu laughs. “At the time, they decided to open a sushiya with a master chef they had a great relationship with. They also considered me studying art to be a waste of time, so I might as well be a part of the family business. I heeded their decision and ended up apprenticing under the sushi chef.”

Little did Hu know at the time, this path would eventually lead him back into the art world. 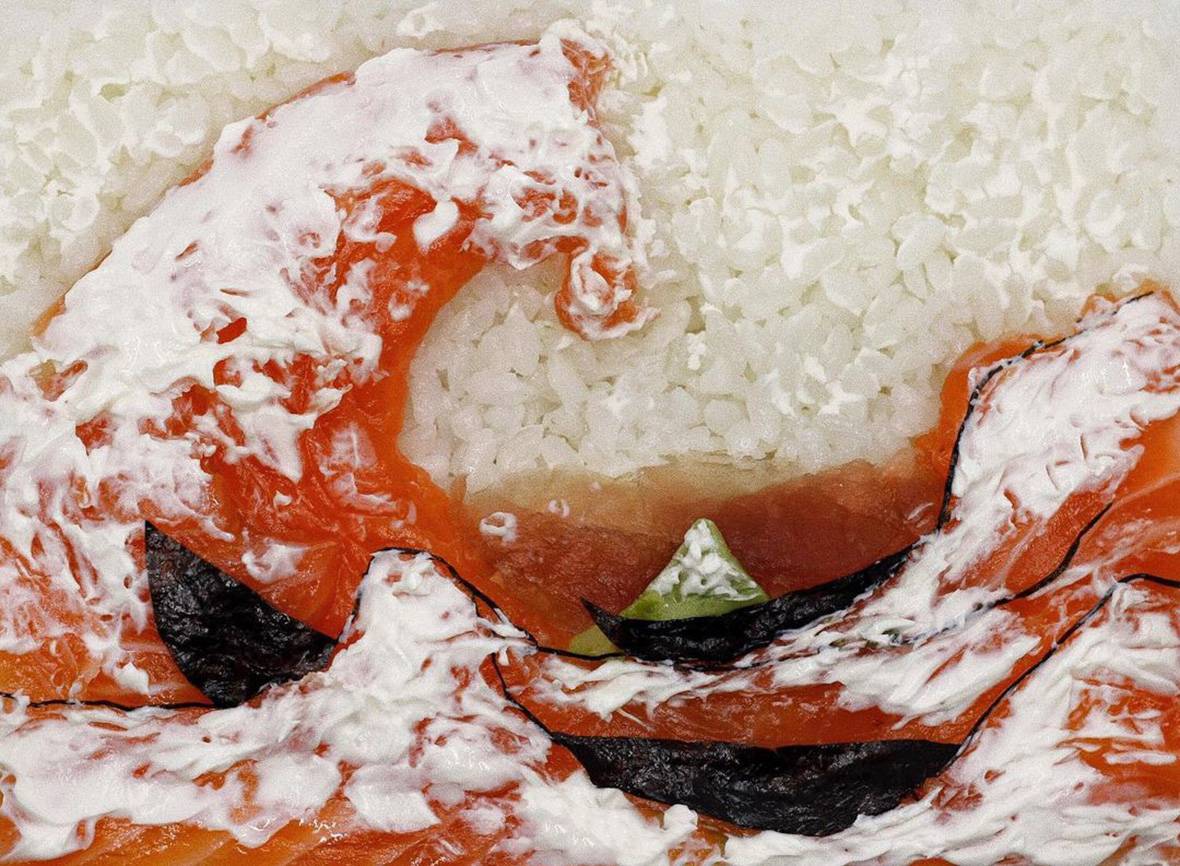 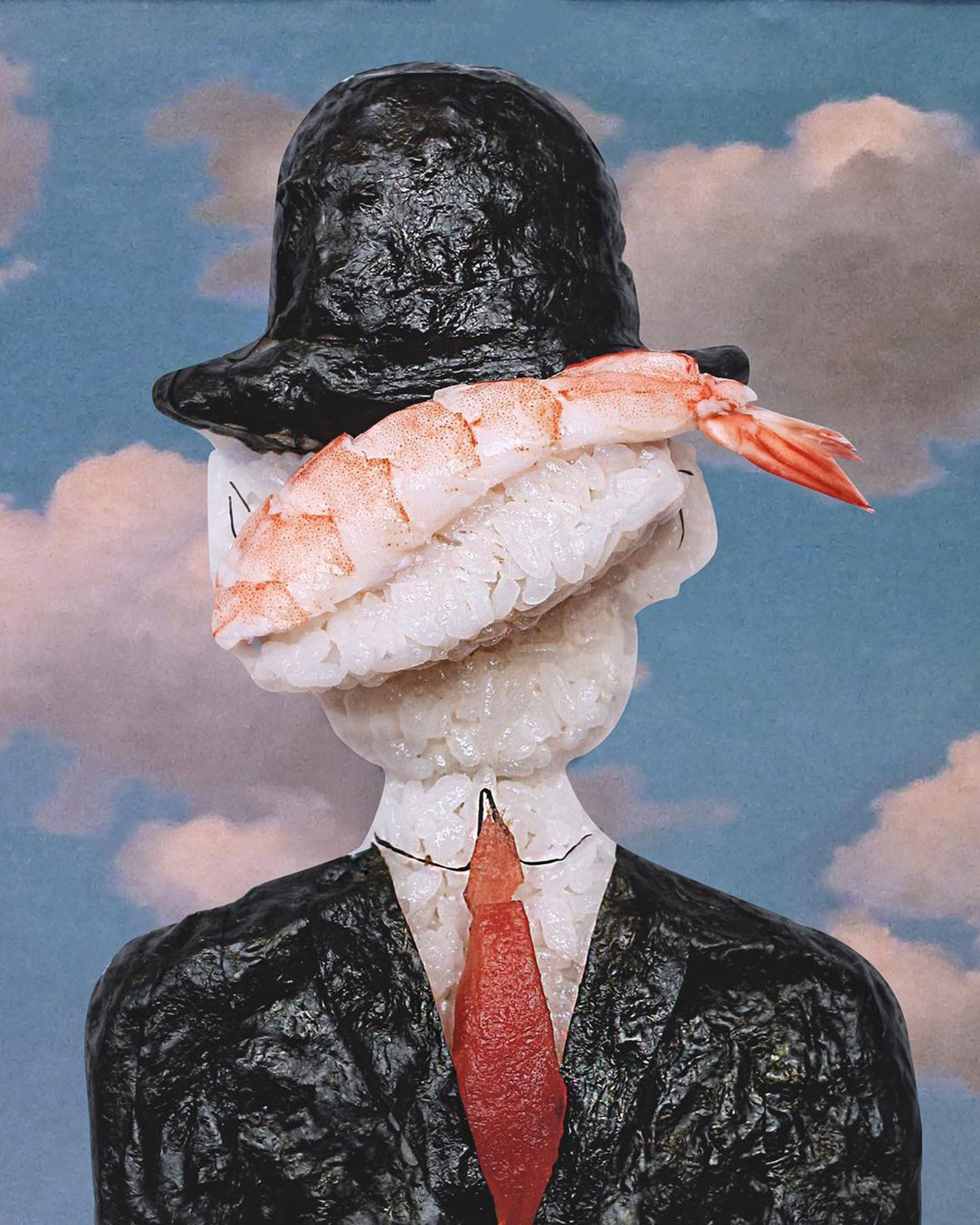 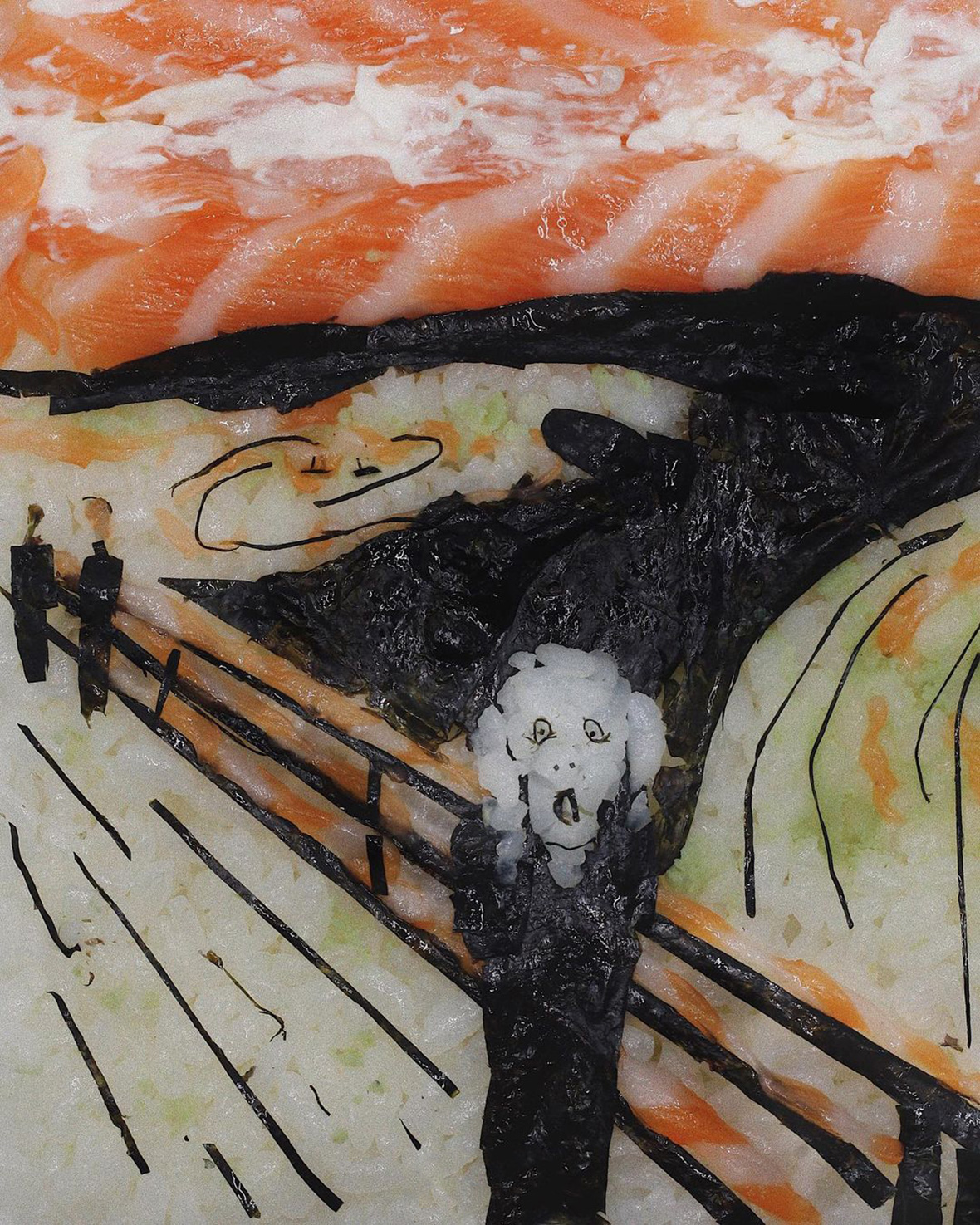 Environment doesn’t always dictate mindset, at least not for Hu. His creative flame was never extinguished working at the restaurant; it was a glowing ember waiting to be stoked alight. Sushi, as it turned out, would be the spark.

It all clicked into place when he realized that sushi rice could be more than just rice. Its malleability means that it could be used to sculpt in interesting ways. Experimentation with the unconventional medium soon followed. In this unexplored creative territory, trial-and-error was key, and the time he’s invested has led to some interesting earlier works, such as his sushi reproductions of Hokusai’s The Great Wave off Kanagawa and Edvard Munch’s The Scream. Instead of a painter’s palette and brush, he brandished a sashimi knife, making his kitchen an artist atelier in its own right. 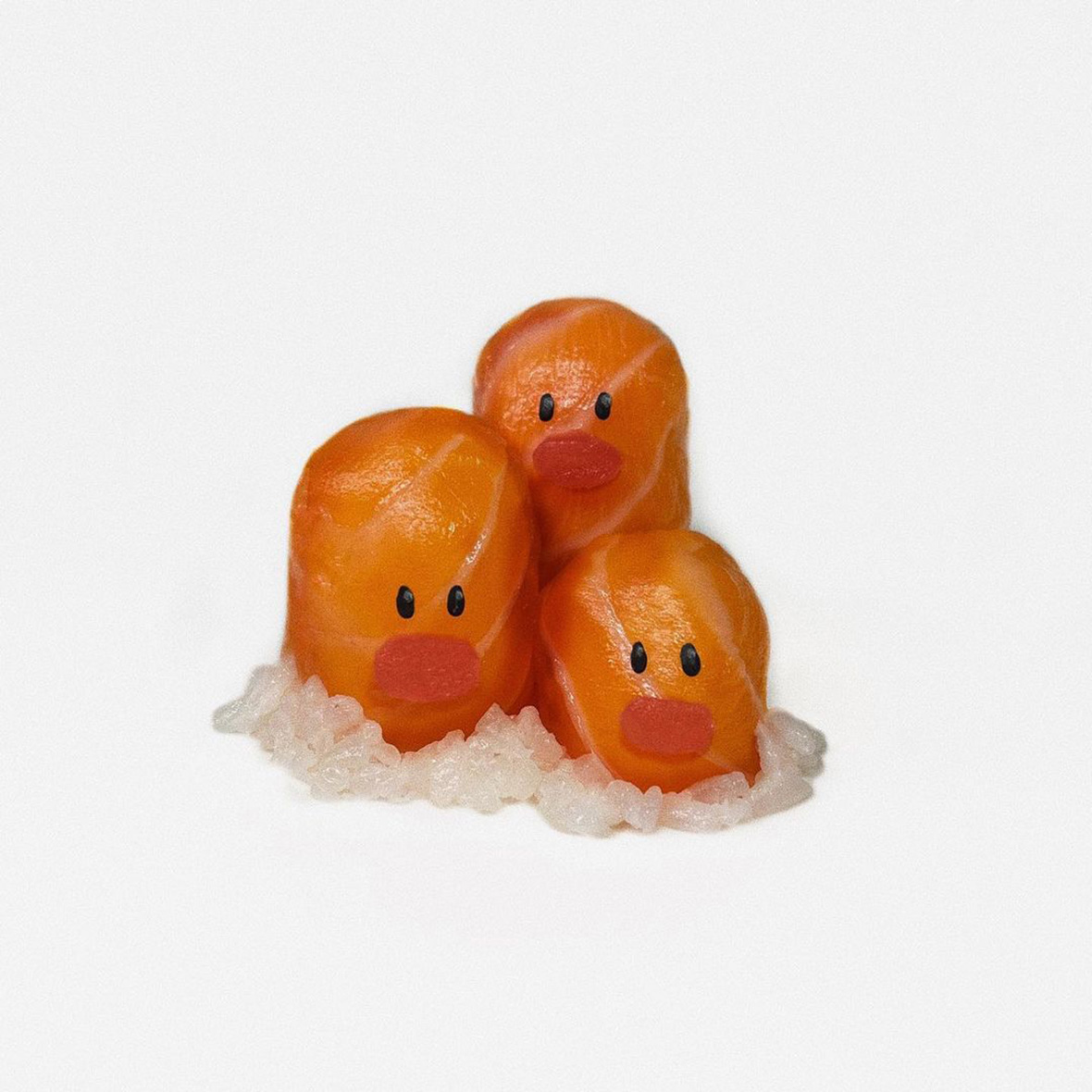 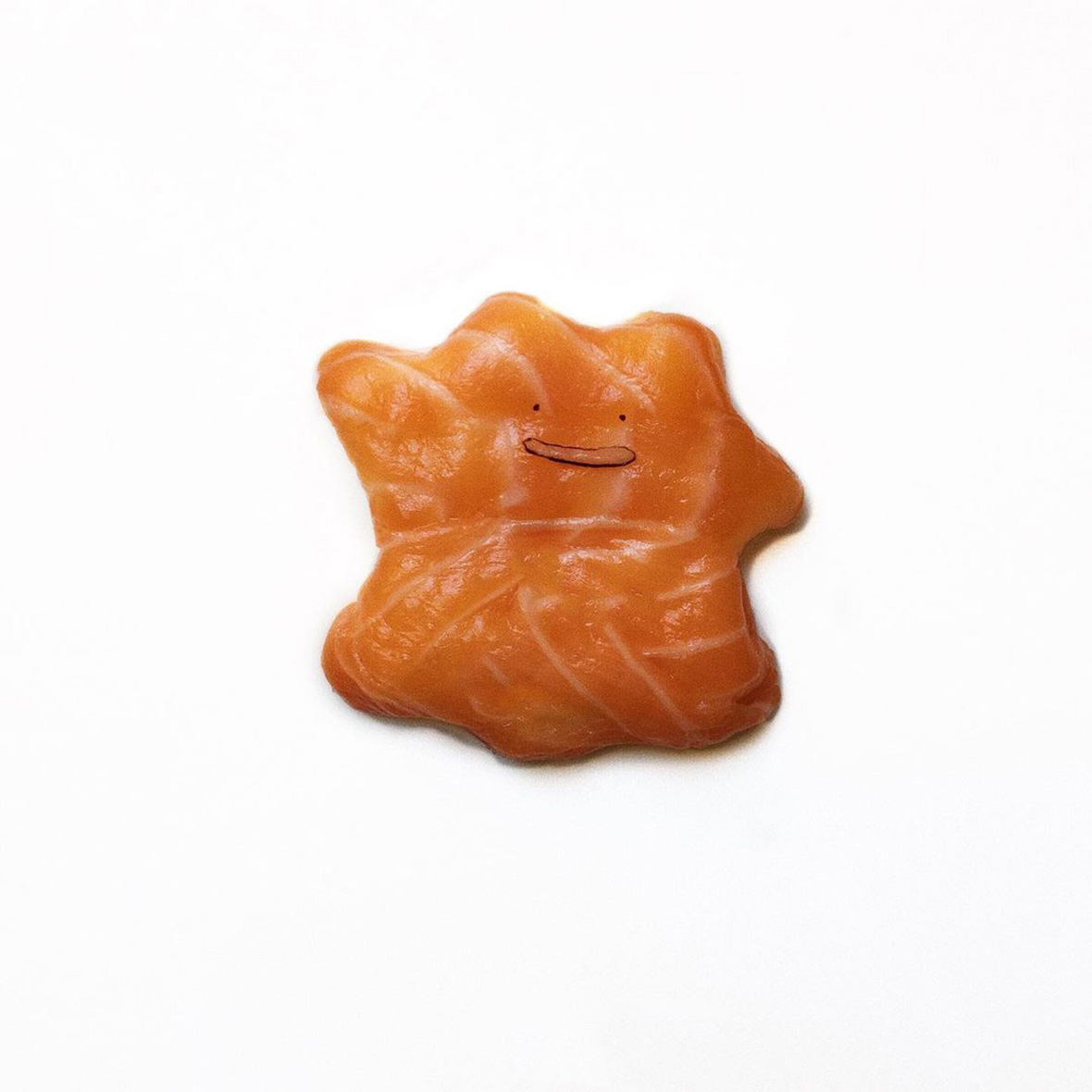 Hu’s inspiration now comes from a mix of pop culture and nostalgia, spanning across topics that range from video games and anime to the NBA and hip-hop culture. He’s created sushi replicas of the original Gameboy, first-generation Pokemon such as Pikachu and Charmander, characters from Dragon Ball Z, the astronauts from hit video game Among Us, and much more. 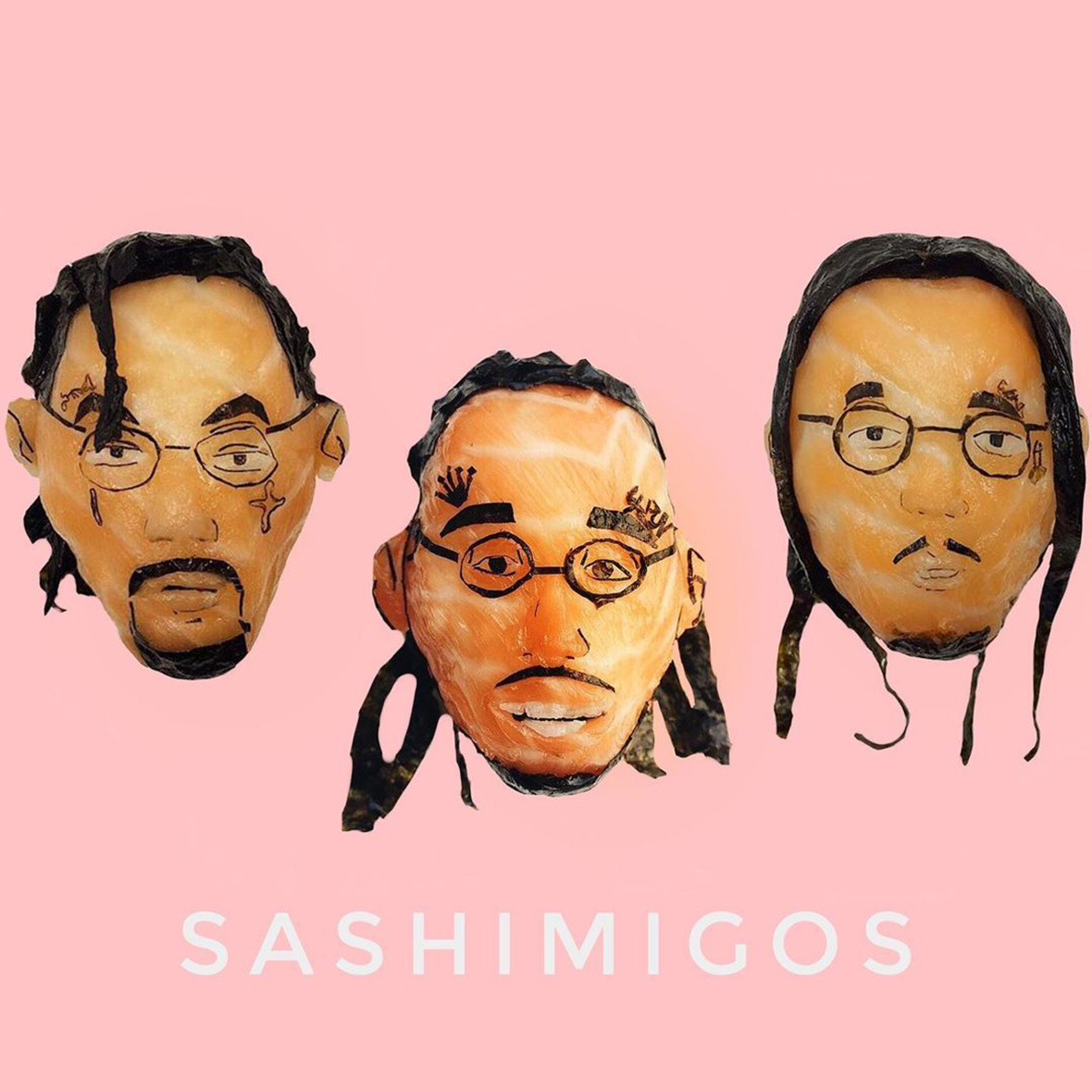 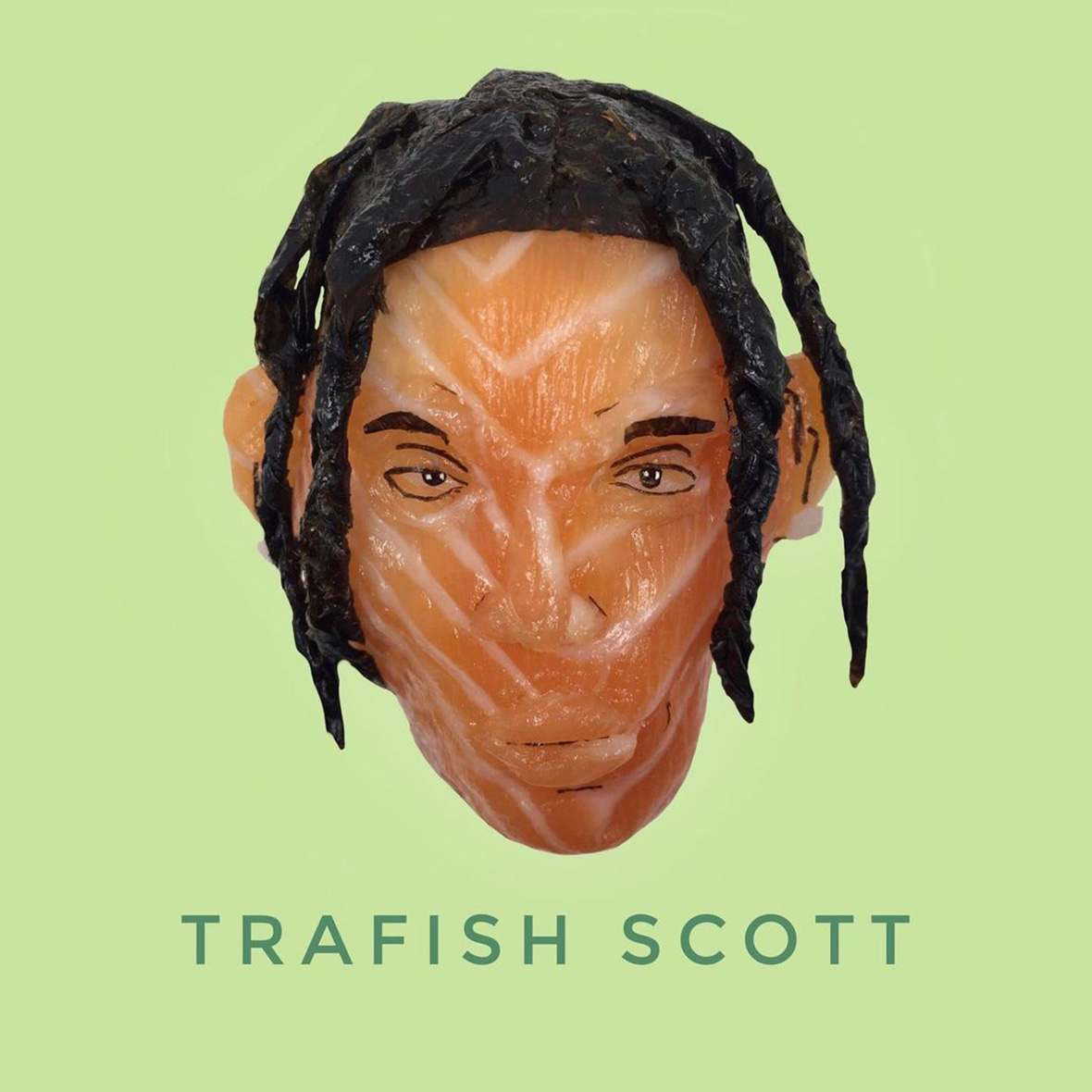 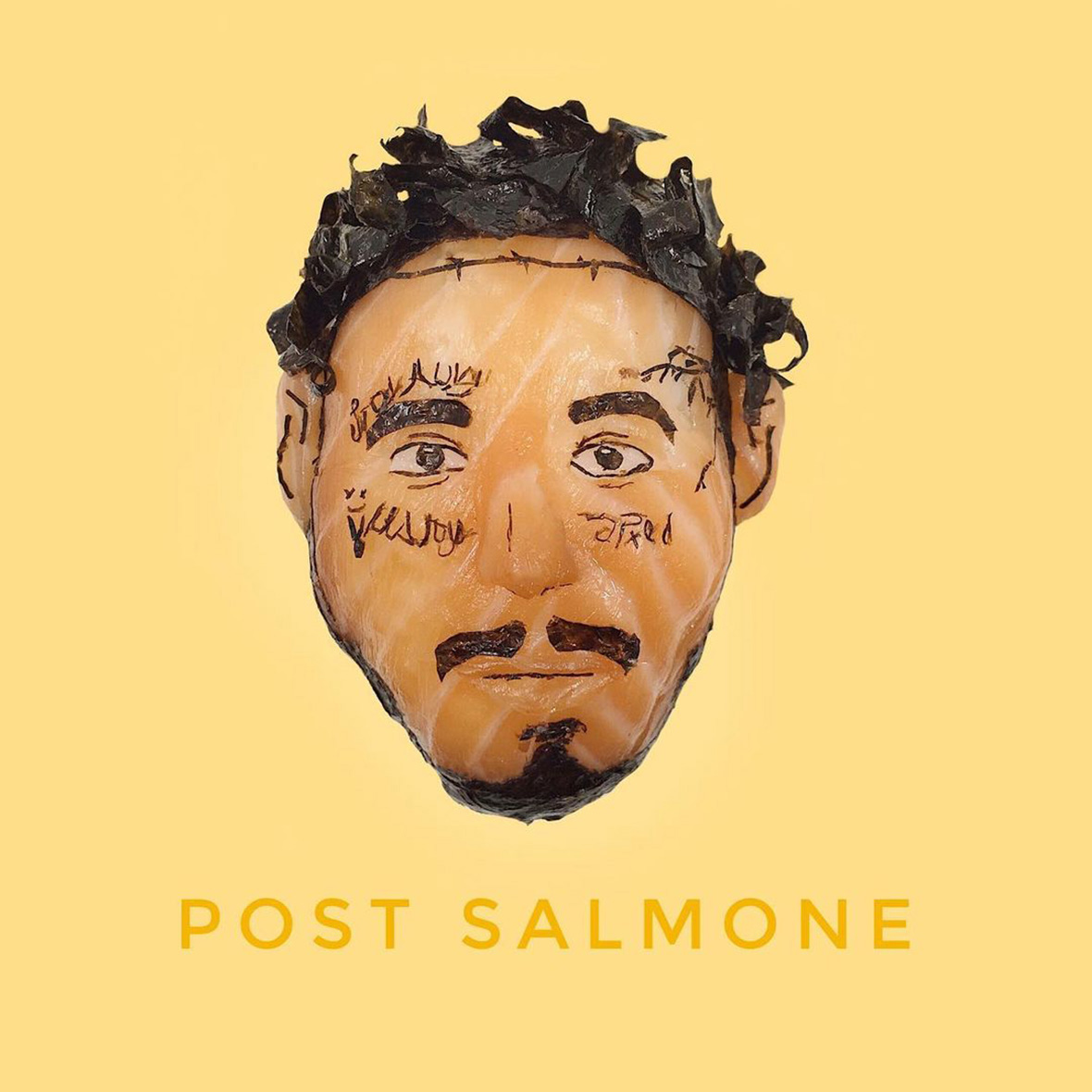 While this diverse range of works has made his sushi art incredibly memorable, what propelled him into the public eye was the much earlier series, Shoe-Shi. As the title implies, it consisted of sushi arrangements of his favorite sneakers. The project kicked off in 2017 when sneaker culture was at the height of its popularity, and his fish-fabricated sneakers quickly caught the attention of sneakerheads around the world, along with coverage from media platforms such as VICE and Highsnobriety. His family’s sushiya, Sakana, also shared the spotlight. 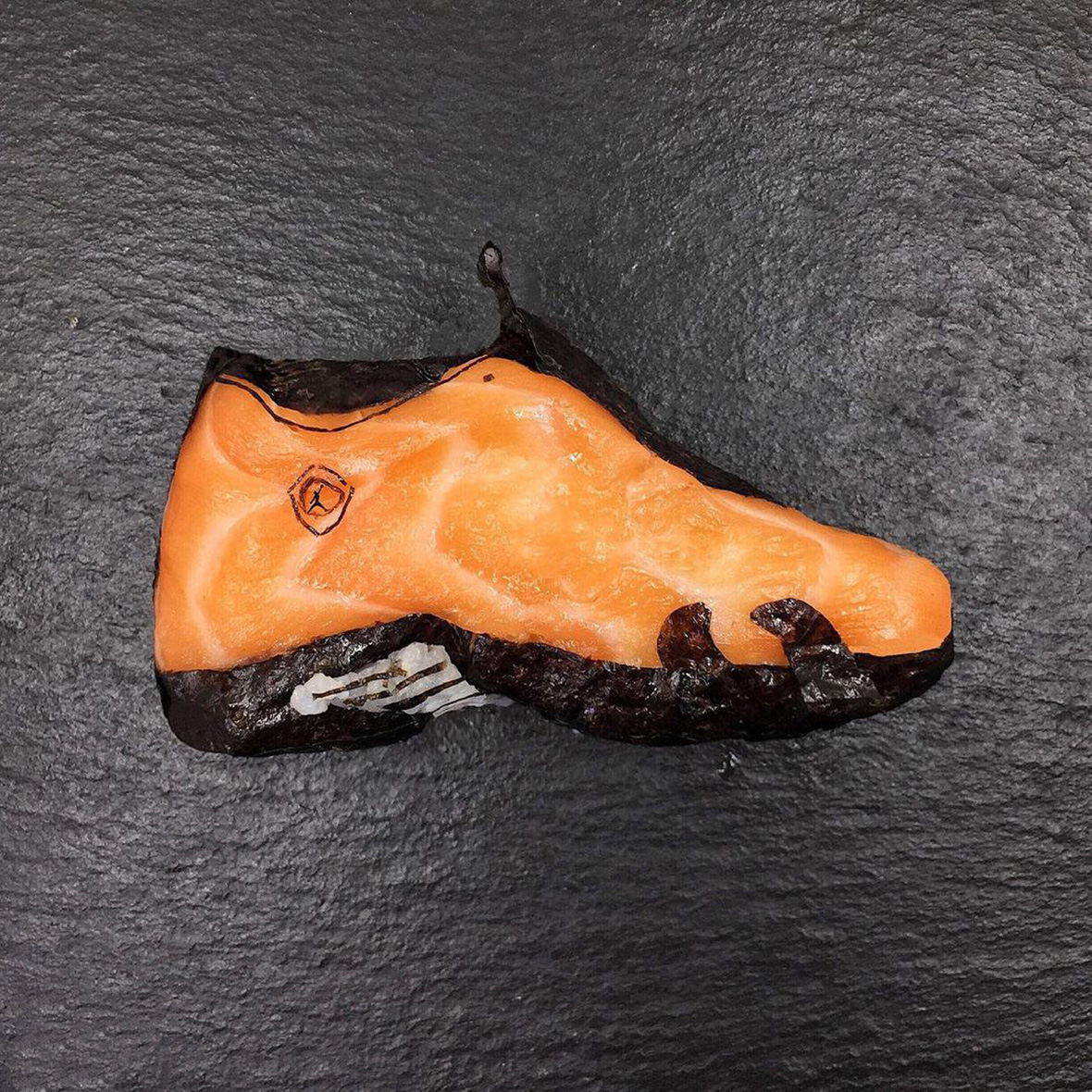 As his fame grew, so did his following. Like many artists, as their fanbase grows, there comes a struggle between appeasing public expectations and not neglecting their own creative urges. This balance is something Hu is always mindful of. “The only way is to adapt to change, to keep an explorative mindset and pushing forward,” he says. His work has since expanded to incorporate more ingredients, such as avocado slices, shrimp, and tuna.

One particularly memorable experience since his social media account took off was a trip to Shanghai, where he ran into a fan who asked for a photo together. This was an unexpected surprise. “Even now, when someone comes in the restaurant asking for me, or when I’m traveling and someone recognizes me, I’m always surprised,” he laughs. “I never thought so many people would see or like my work.”

The positive feedback he’s received has been instrumental in motivating him to continue, and in fact, he no longer even considers himself as just a chef experimenting with art, but rather an artist who’s passionate about food. “Even though my works are still based on my personal passions, the way I think about creating is completely different from before,” he says.

Hu has also toyed with the idea of posting on Chinese social media platforms to get his work in front of more people, but he has some reluctance. “Truth be told, with considerations to the cultural roots that my work taps into, it’s tricky to say how it’ll be received in my country,” he says. “I haven’t found the courage to share them there yet.” 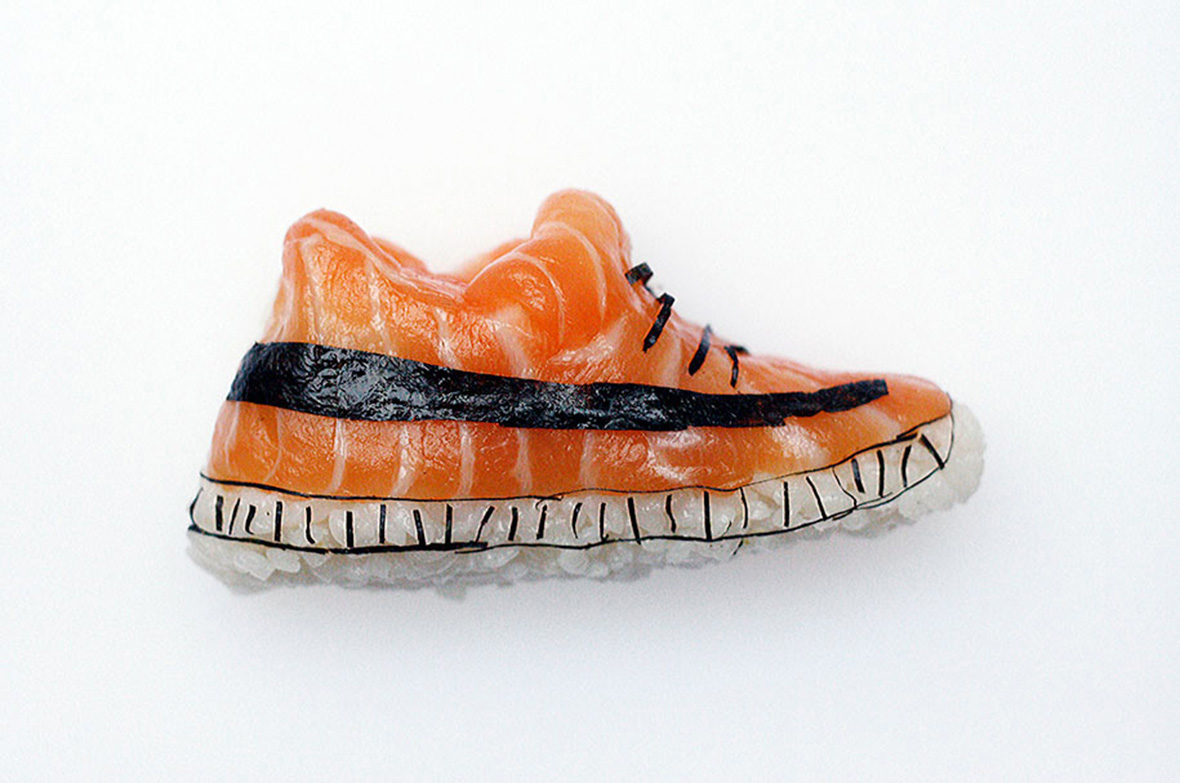 Fans from all over the world have visited Hu’s sushiya in Milan just to get a taste of his famous shoe-shi. He enjoys these special requests and seeing a customer’s face light up to one of his onigiri creations in person is something special. “It feels almost like I’m doing performance art,” he says. “Sushi to me is both food and art, so I don’t feel like a sushi chef anymore—I feel like an artist performing in front of an audience.”

These experiences have led him to reflect on the boundary between food and art. Where does the line begin and end? “I always wonder if customers consider whether my Shoe-shi creations were artwork or just another dish,” Hu says. 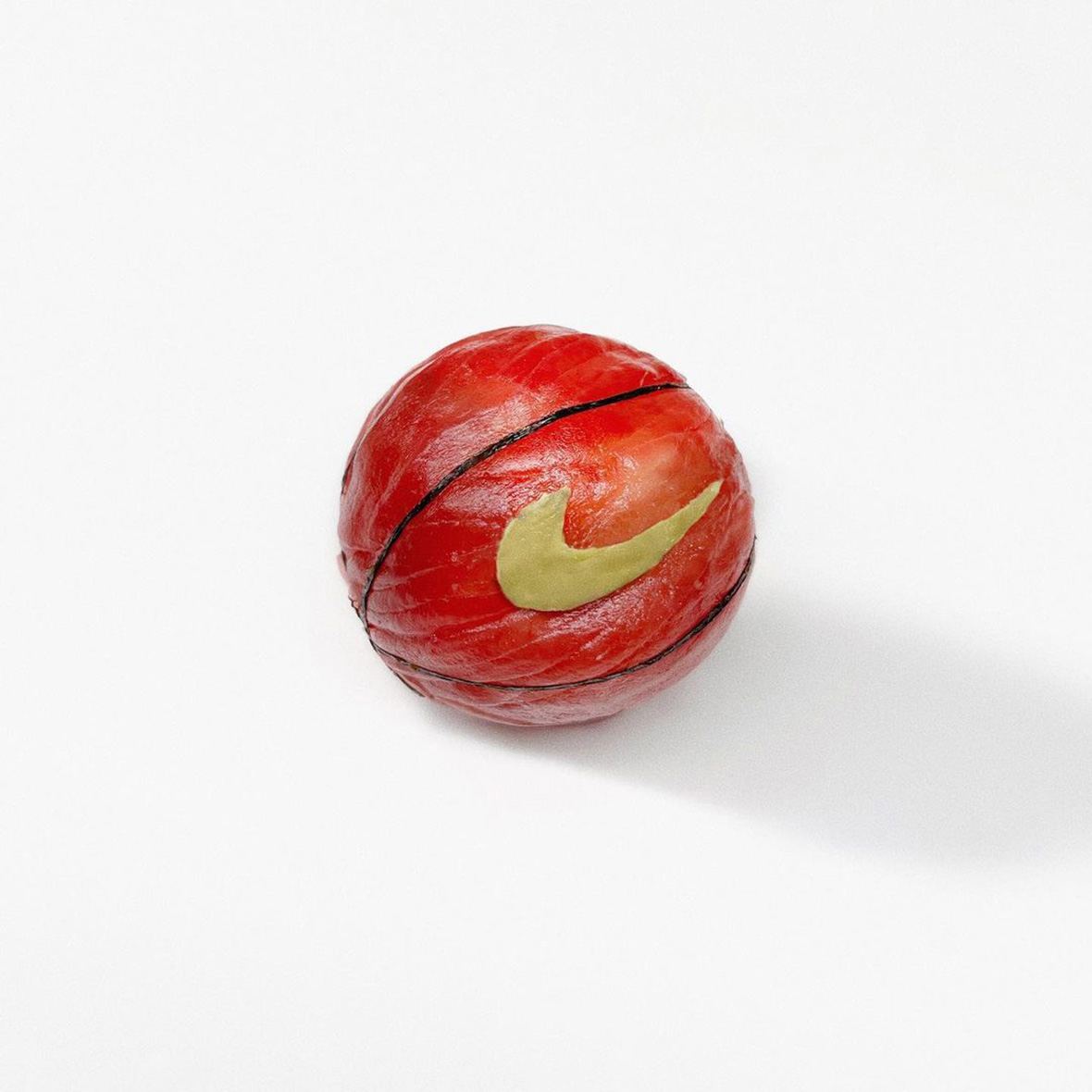 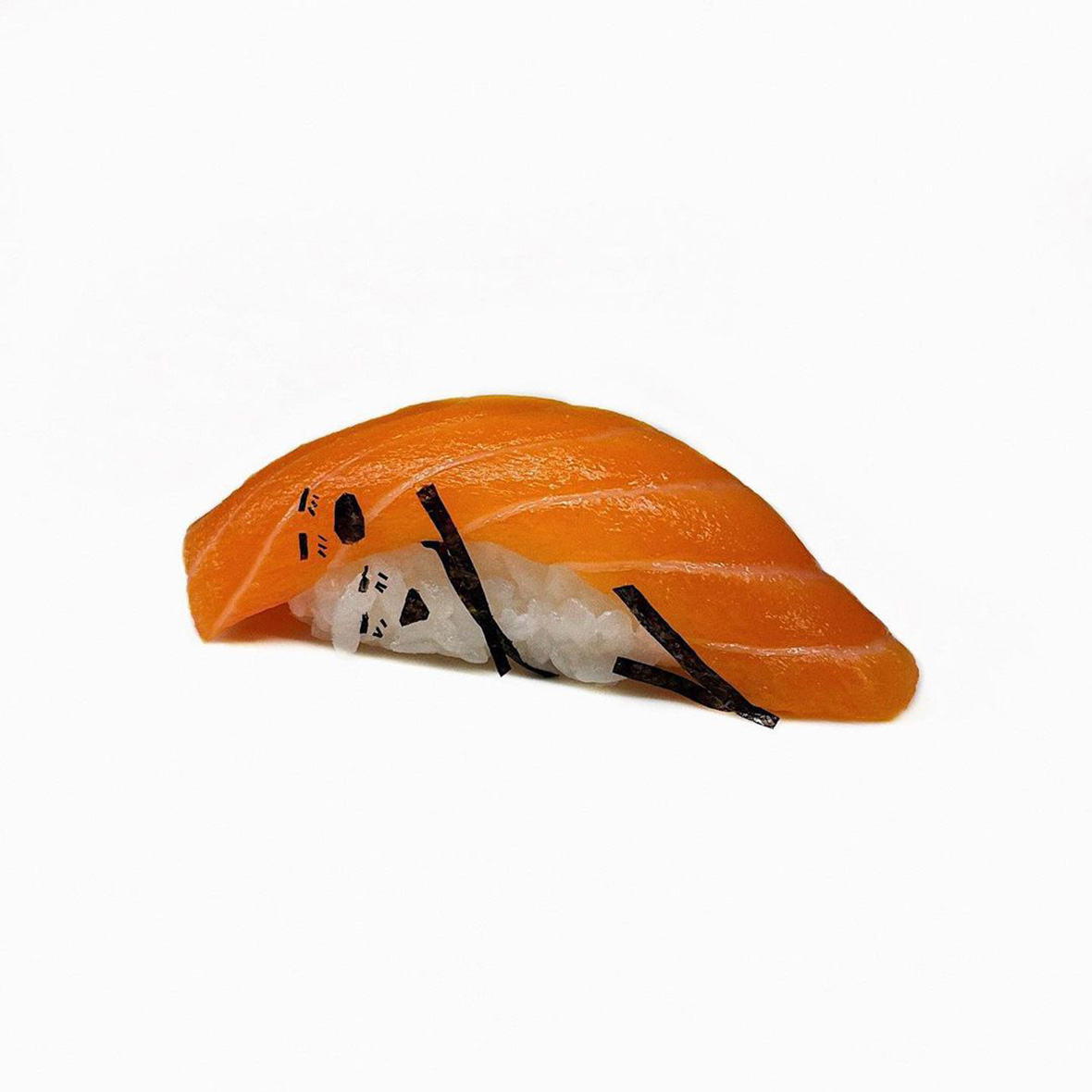 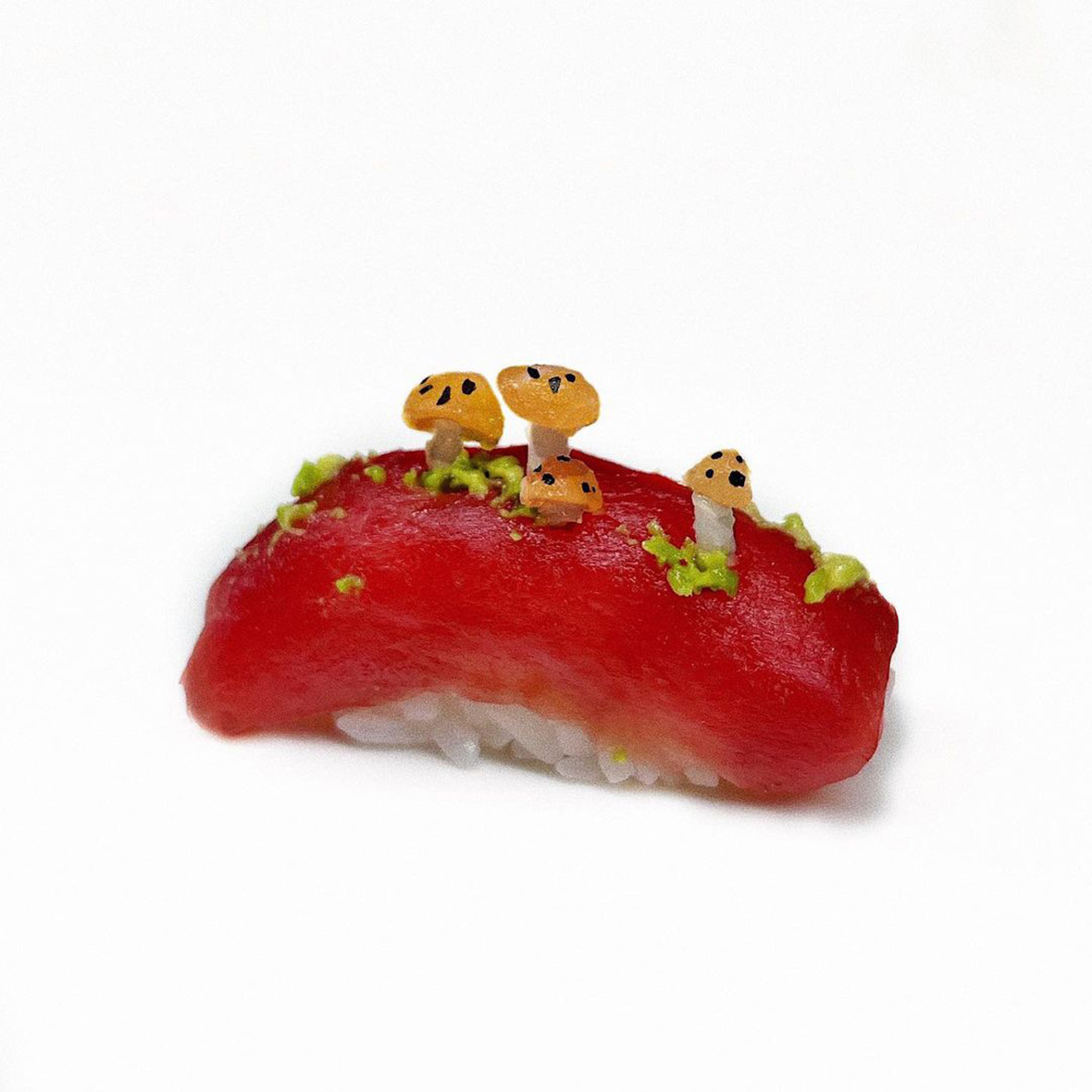 From his observations, some customers seem to just consider his work as just whimsical food, which can be slightly disappointing. “It’s unsurprising though, considering that my medium of choice will influence these reactions,” he notes. “No matter what, my onigiri art must return to their original essence, which is something destined to be eaten.“

Hu still values the appreciation, even if it’s only at a surface level. He even draws parallels between these customers and the media coverage he’s received. “I’m honored about being interviewed and featured on Western media,” he says. “But if they’re more eager to learn more about the creative process behind it, that’d be even more exciting.”

In this age of internet fame, he’s seen how artists have pigeonholed themselves once they find success with a particular work. This is something he doesn’t want to happen with his onigiri art, hence the reason he’s expanded his work beyond shoe-inspired sushi. “If people mention me in the future, I want to be thought of as a sushi artist,” he says. “I don’t want to just be thought of as the guy who made shoe-shi.” 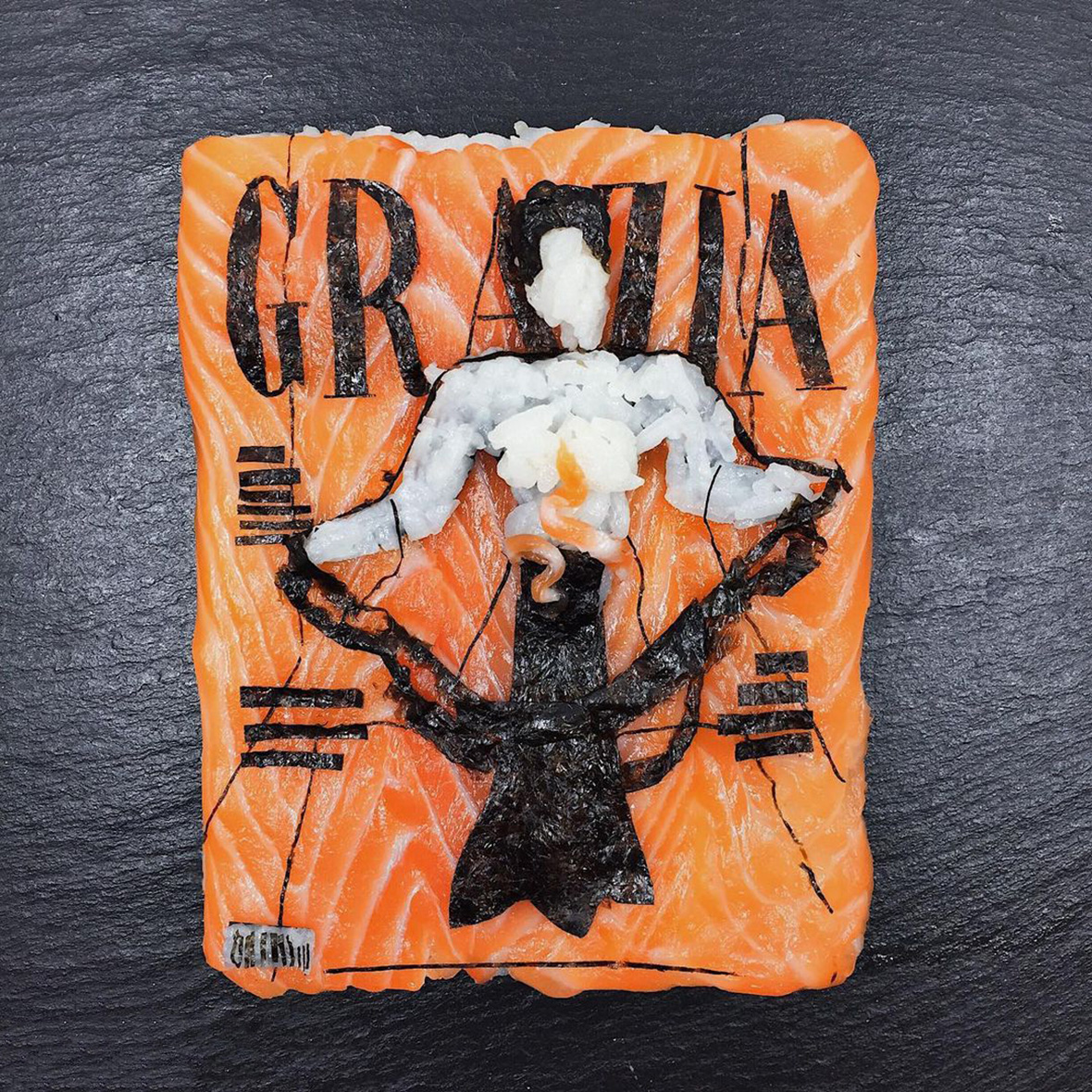 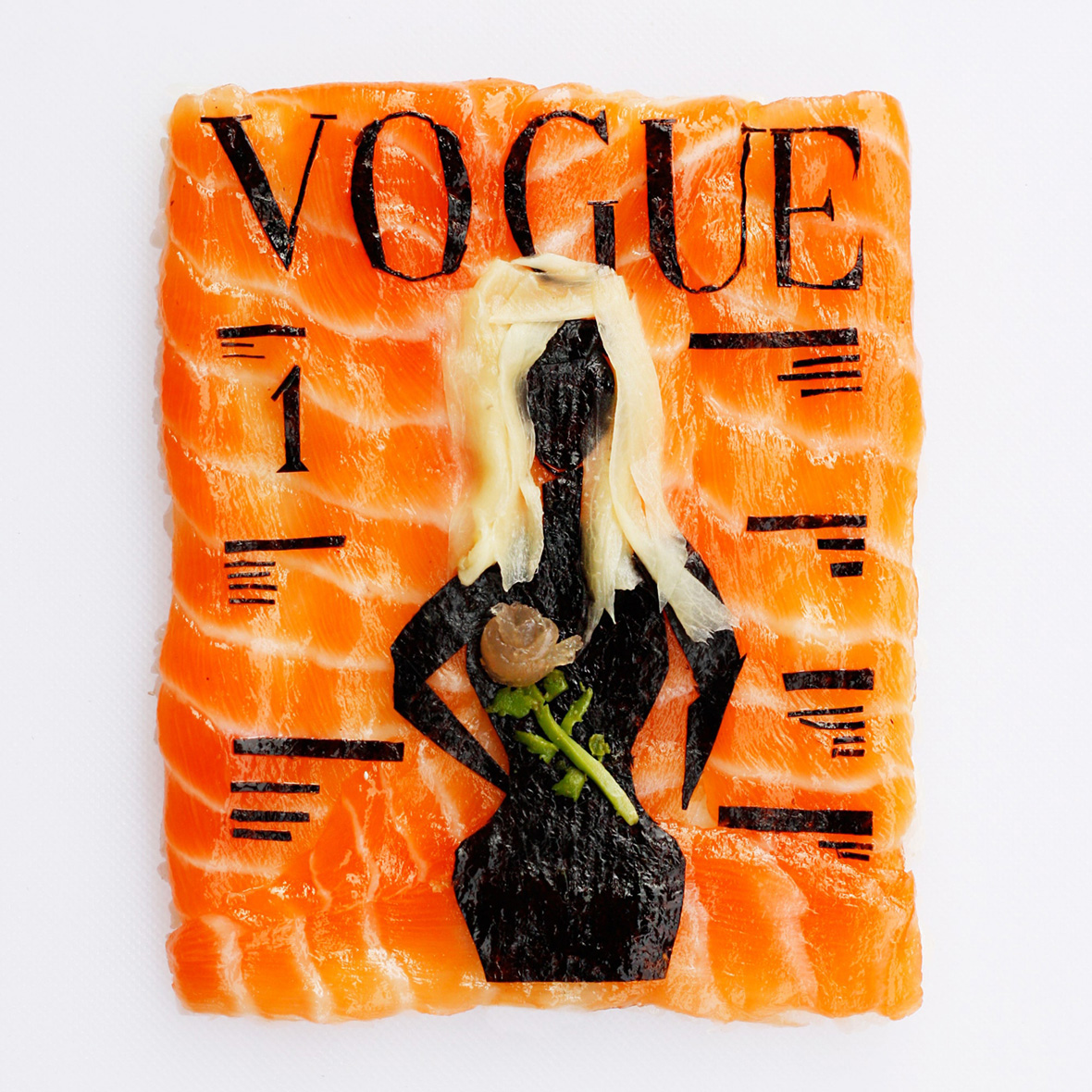 On October 5, 2018, Banksy made ripples in the art world when his Girl with Balloon painting was partially destroyed via a hidden shredding device the moment that the painting was auctioned off for 1.4 million dollars at Sotheby’s. In an Instagram post, Banksy posted a quote by philosopher Mikhail Bakunin: “The urge for destruction is also a creative urge.” The piece was later re-titled Love is in the Bin and auctioned again at a staggering 25 million dollars, close to 20 times the valuation of the original work.

Hu, a longstanding Banksy fan, was deeply inspired by this act by the art-world renegade. He became interested in the ephemeral nature of art, and how destruction doesn’t necessarily lessen the artistic value of a piece of work. This led him to wonder about the possibility of opening a sushi art museum, where he would create unique sushi art that would be displayed one day before being eaten.

“This idea is tied to two lines of thinking. First, I want my art to return to its essence of being food, and food in itself has a limited shelf life. Secondly, I believe this immortalizes each piece, in that in being consumed digested, it’ll eventually return to the natural world,” Hu grins. “Banksy destroyed his own artwork, so why can’t I eat mine?”