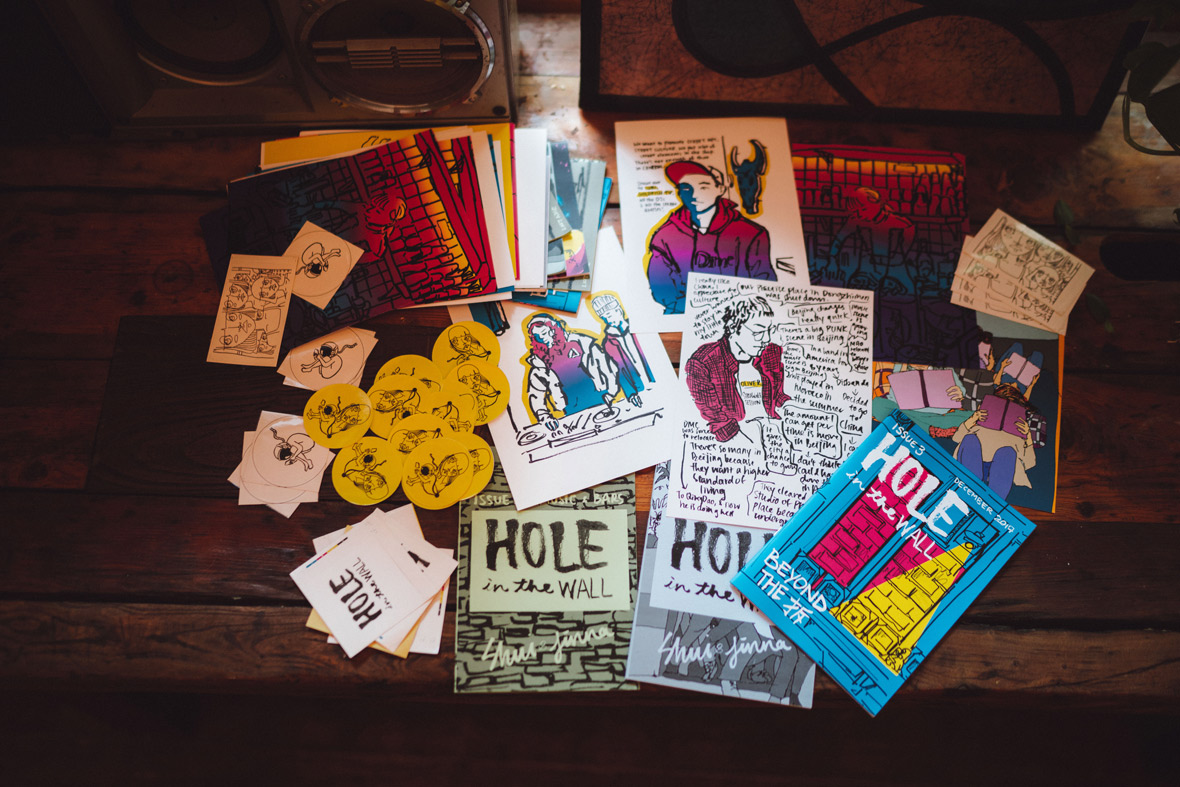 “Beijing is a city of constant change. It is where anything can happen—the good, the bad, and the ugly.” This is how the third issue of Hole in the Wall Collective’s zine begins. In a colorful illustration next to these words, two people, a young woman in overalls and an elderly man hunched over a cane, watch the demolition of an old brick building amid piles of rubble and a towering construction crane.

It’s a scene familiar to anyone who’s spent time in a Chinese city: the constant cycle of destruction and rebirth in the race to modernize. This issue of Hole in the Wall doesn’t focus on the demolitions themselves but instead documents the disappearing life in Beijing’s hutongs, the traditional alleyway neighborhoods that are increasingly being destroyed to make way for new development. 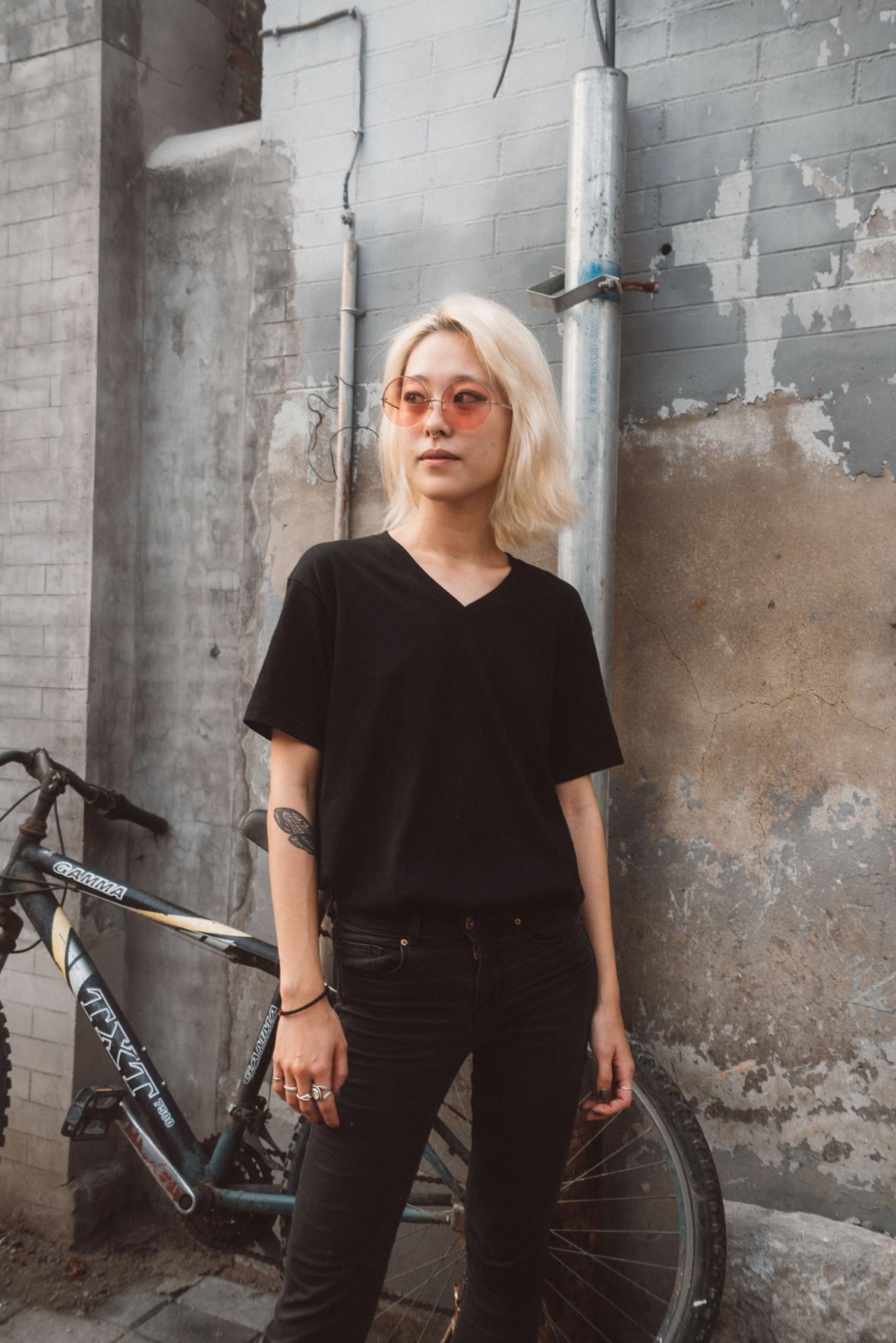 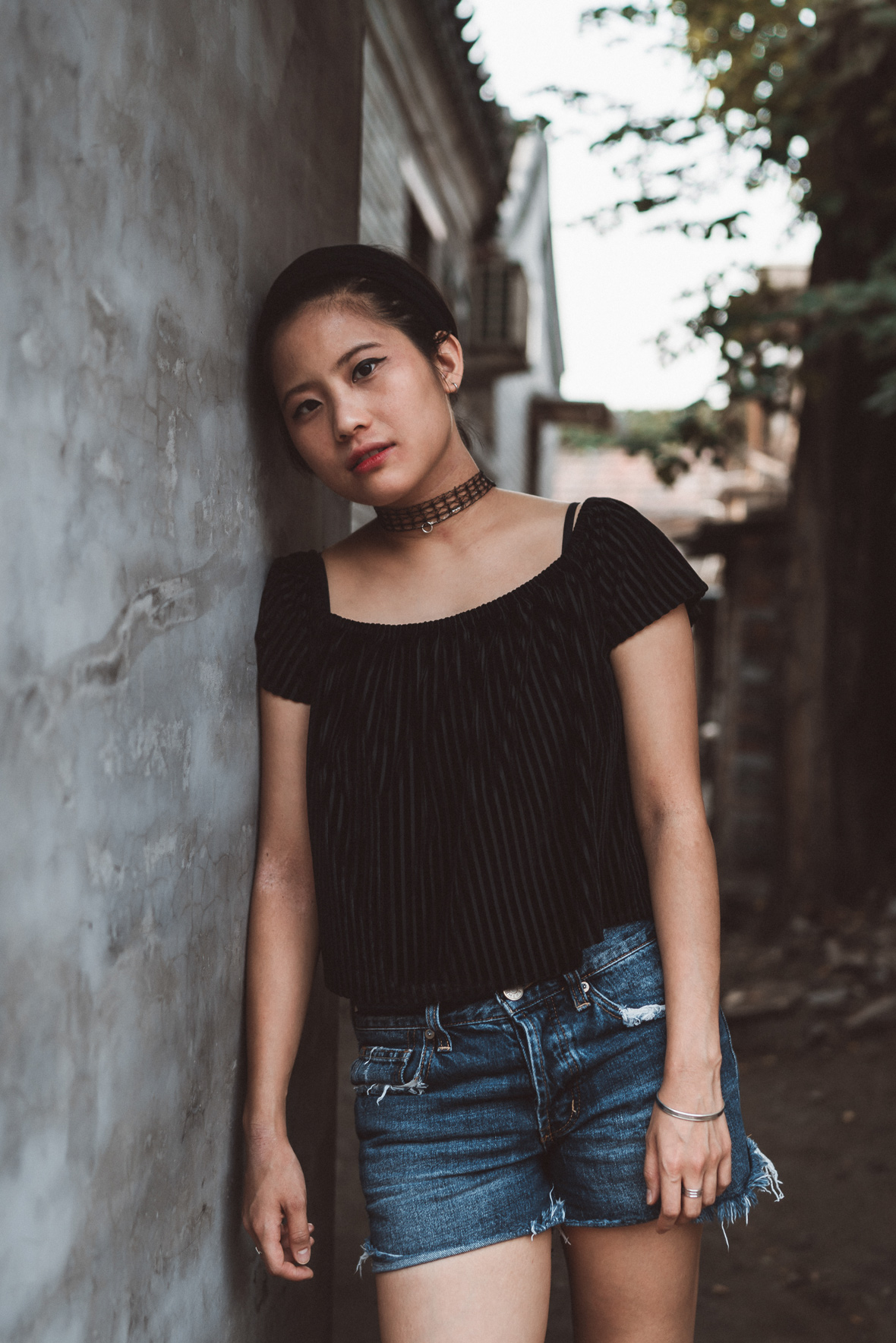 Hole in the Wall Collective is made up of two illustrators, Shuilam Wong and Jinna Kaneko. “We record Beijing’s underground music scene, its night life, its street culture, its hutong culture, anything that’s under the radar and not very mainstream,” Wong says.

Wong and Kaneko went to the same high school in Beijing and both moved back after college. Reconnecting, they formed the Hole in the Wall Collective. “I didn’t know Shui had majored in illustration until I found her on Instagram,” says Kaneko. “I sent her a message and told her ‘I want to make a zine with you!’ When we met up, ideas came together and everything started evolving.” 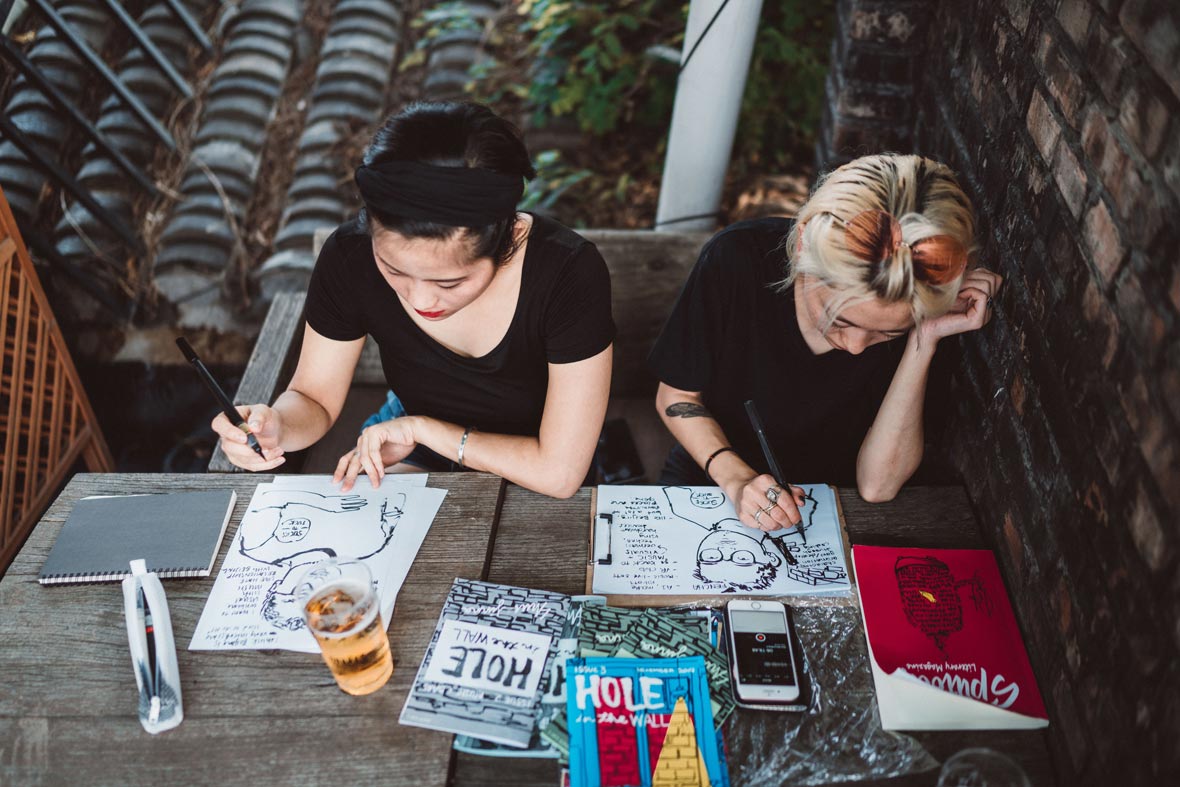 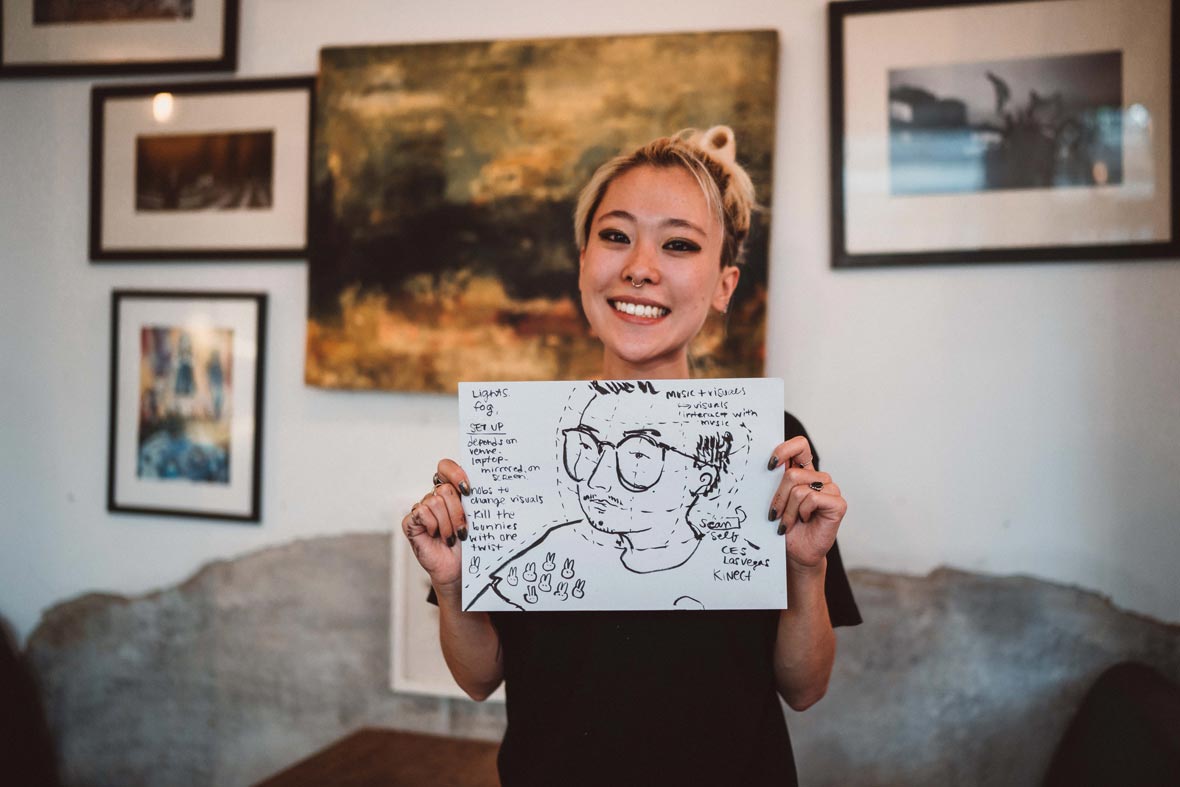 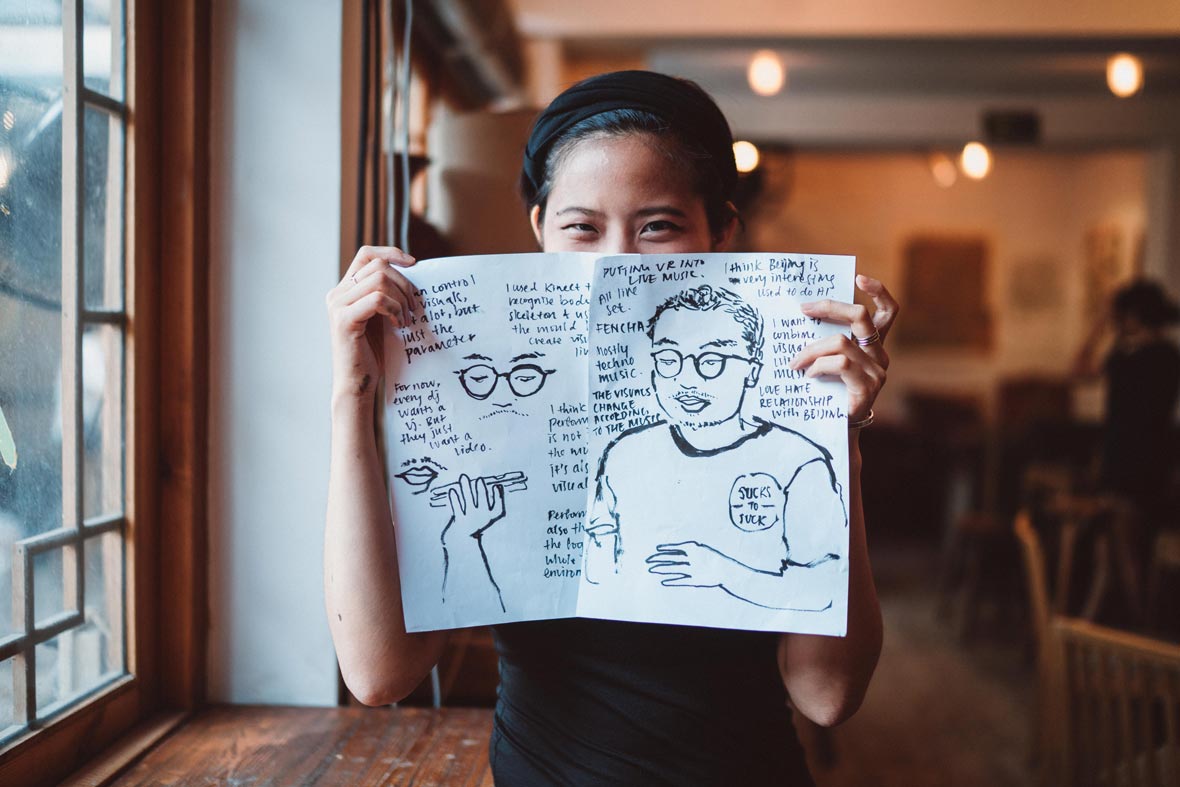 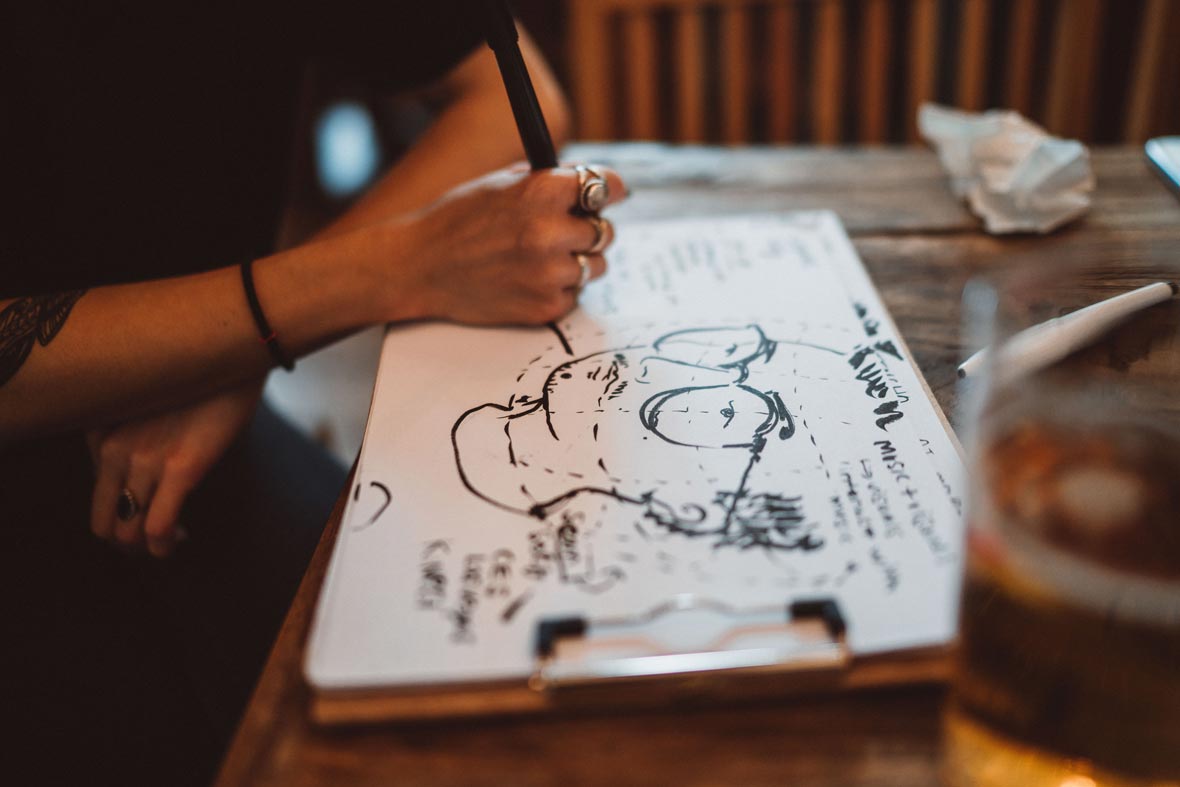 In 2017, the duo released their zine’s first issue, which consisted mainly of interviews and portraits of people in Beijing’s offbeat artistic neighborhoods, such as Gulou. “Our interviews are very casual. We initially wanted something very structured, but my computer didn’t always work and Jinna’s phone would often run out of battery, so we just drew and wrote down quotes, and that became the structure of our interviews—drawing live,” says Wong.

They note that a live portrait is a unique way to get to know someone because it allows the interviewee to open up for a calm and authentic conversation. “One drawing may take 15-30 minutes, and it’s an excuse to talk to that person. You can sit down and take your time. They’re more willing to talk in depth, rather than just stick to surface-level topics,” Kaneko says. 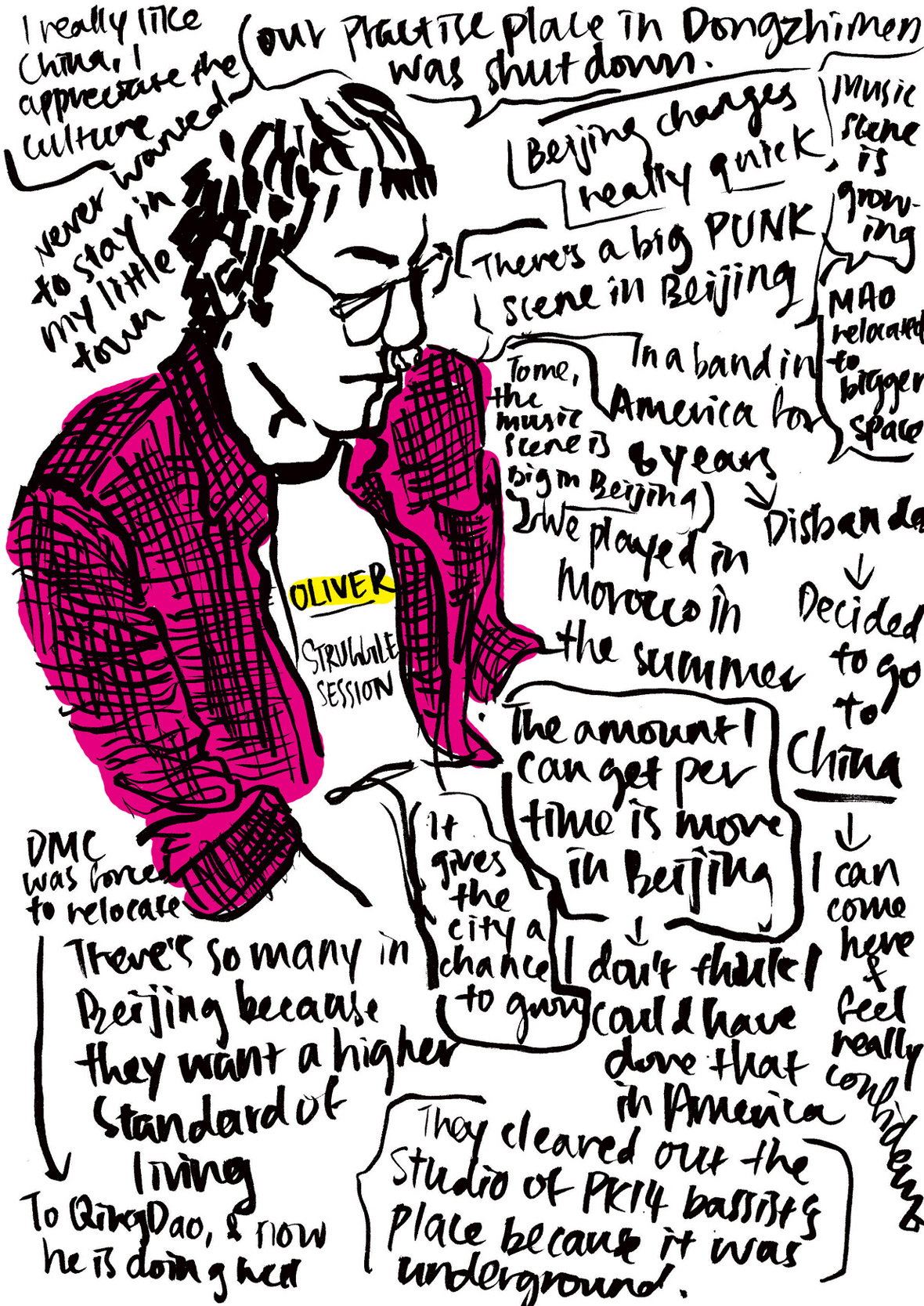 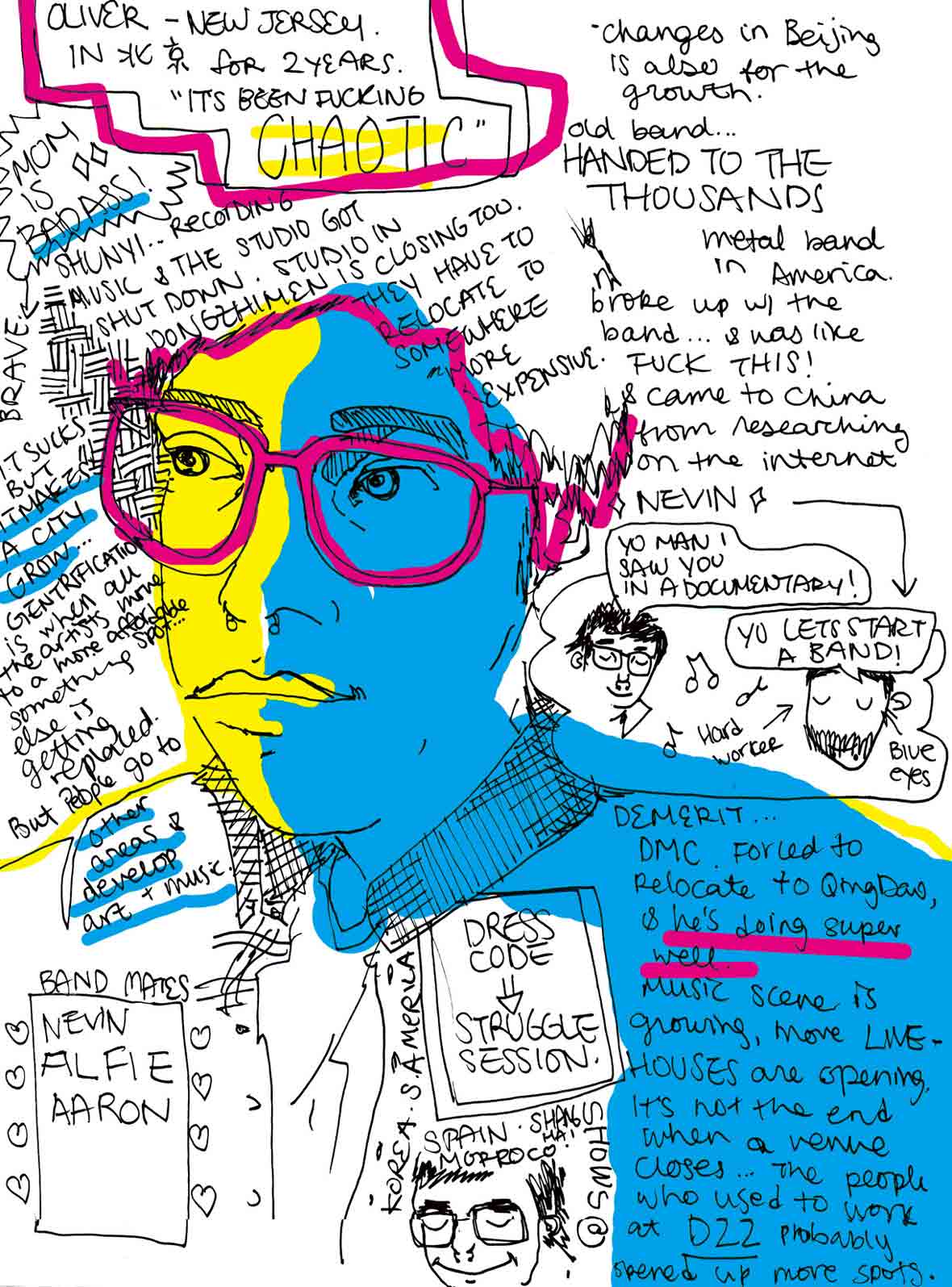 Wong explains that around the time of the 2008 Beijing Olympics, many hutong neighborhoods became revitalized, as independent shops, restaurants, cafés, bars, and other businesses opened up. “Hutongs are often home to tight-knit communities,” Wong says. “People often sit outside, just chilling, hanging out. Even the bathrooms are communal.”

“Some hutongs, like the ones around Nanluoguxiang, have always been touristy,” Kaneko adds, “but tourists have created their own community and opened up bars. In the future, we hope to cover art spaces, hotels, or cafés that mix traditional and modern architecture.” 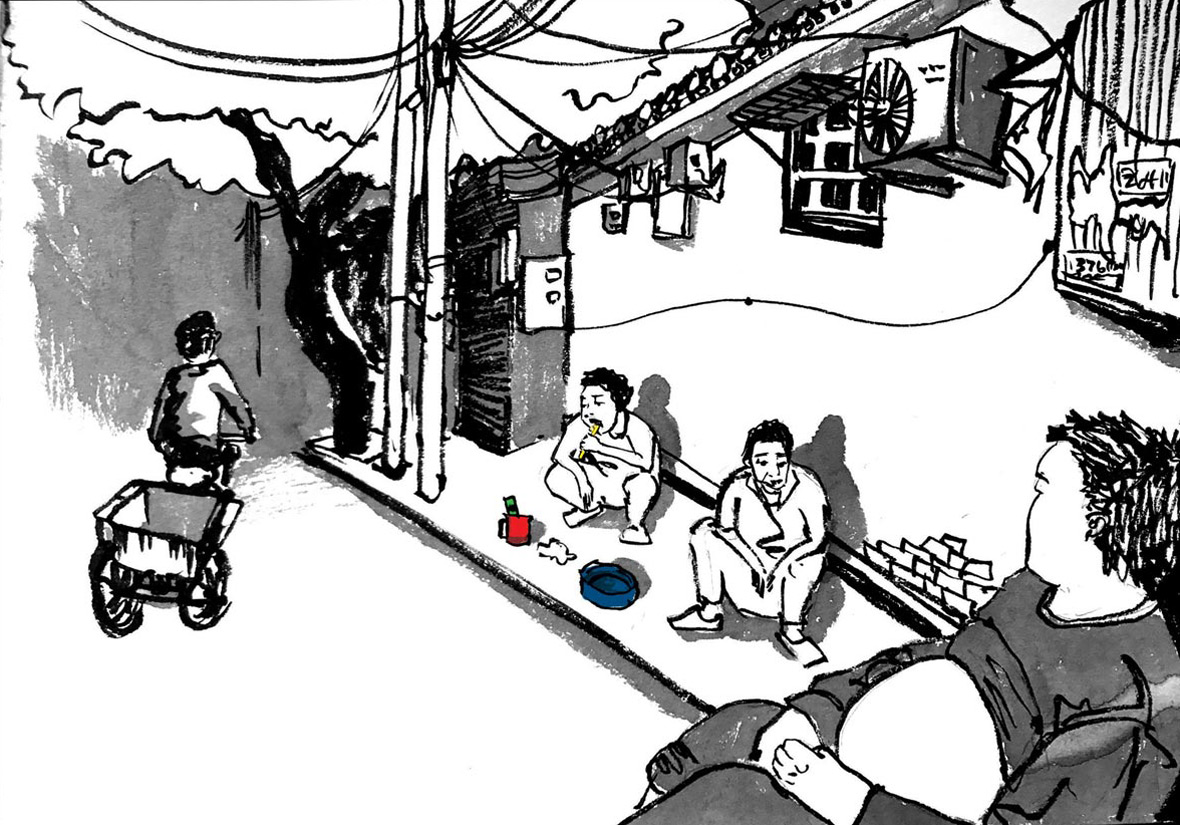 As Hole in the Wall’s interviews show, owners of bars and clubs share a resilience and a determined outlook on staying in business in Beijing. “Closings and demolitions have always been happening,” says Wong. “Maybe now the issue’s getting a bit more media attention, but for these bar owners, it’s always been a way of life, especially in the hutong neighborhoods. People find ways to work around it, and they’ve accepted it. I think that’s what makes the city interesting: there’s a lot of energy to find different ways to work around problems. I personally believe that if you’re too comfortable, you won’t create anything interesting.” 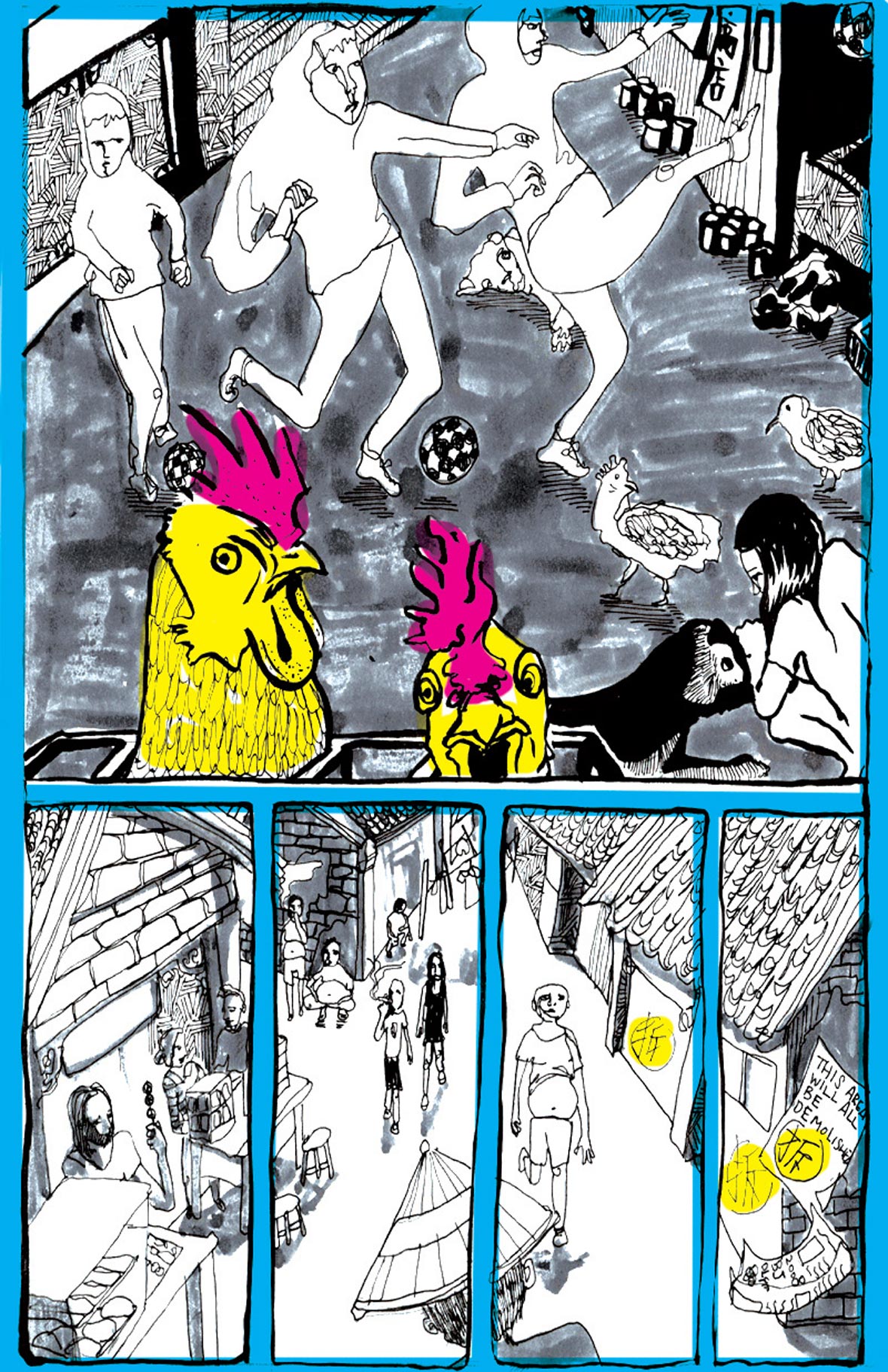 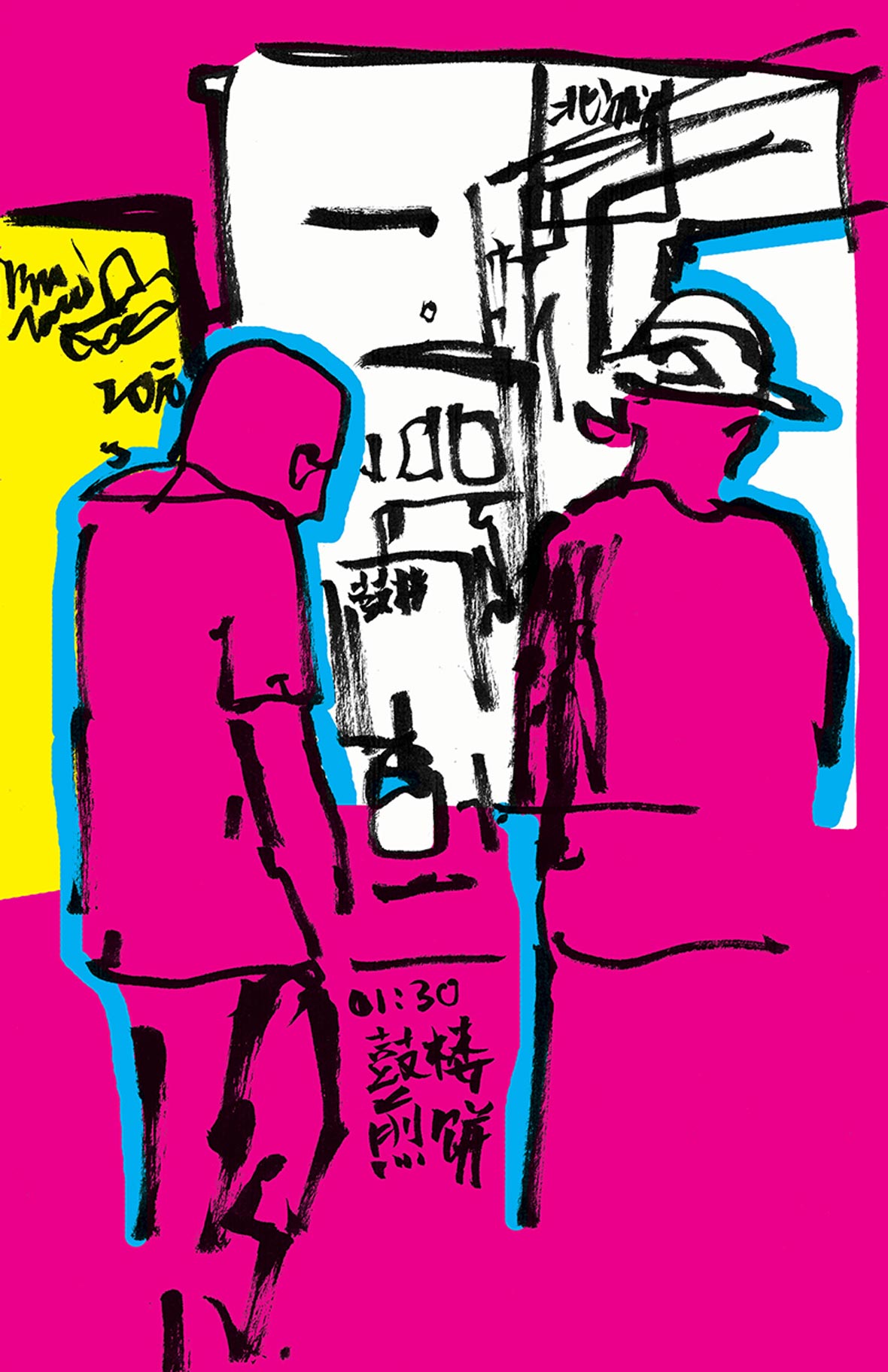 From zine culture to independent art to punk music, Beijing has a rich environment for Hole in the Wall Collective to draw on. “Compared to all the places I’ve lived in, I see more potential here,” Wong says. “I’ve lived in Singapore, Beijing, and London, and I’ve spent a little bit of time in Japan, and I’ve done far more here than I’ve ever done in any other city.”

Despite their initial focus on Beijing, Wong and Kaneko also want to go on to cover other countries and cities. They’re planning a future issue on Hong Kong and Tokyo. “We’re visual journalists,” Wong says. “Our goal is to record the now, the youth, and the vibrant, urban culture.” 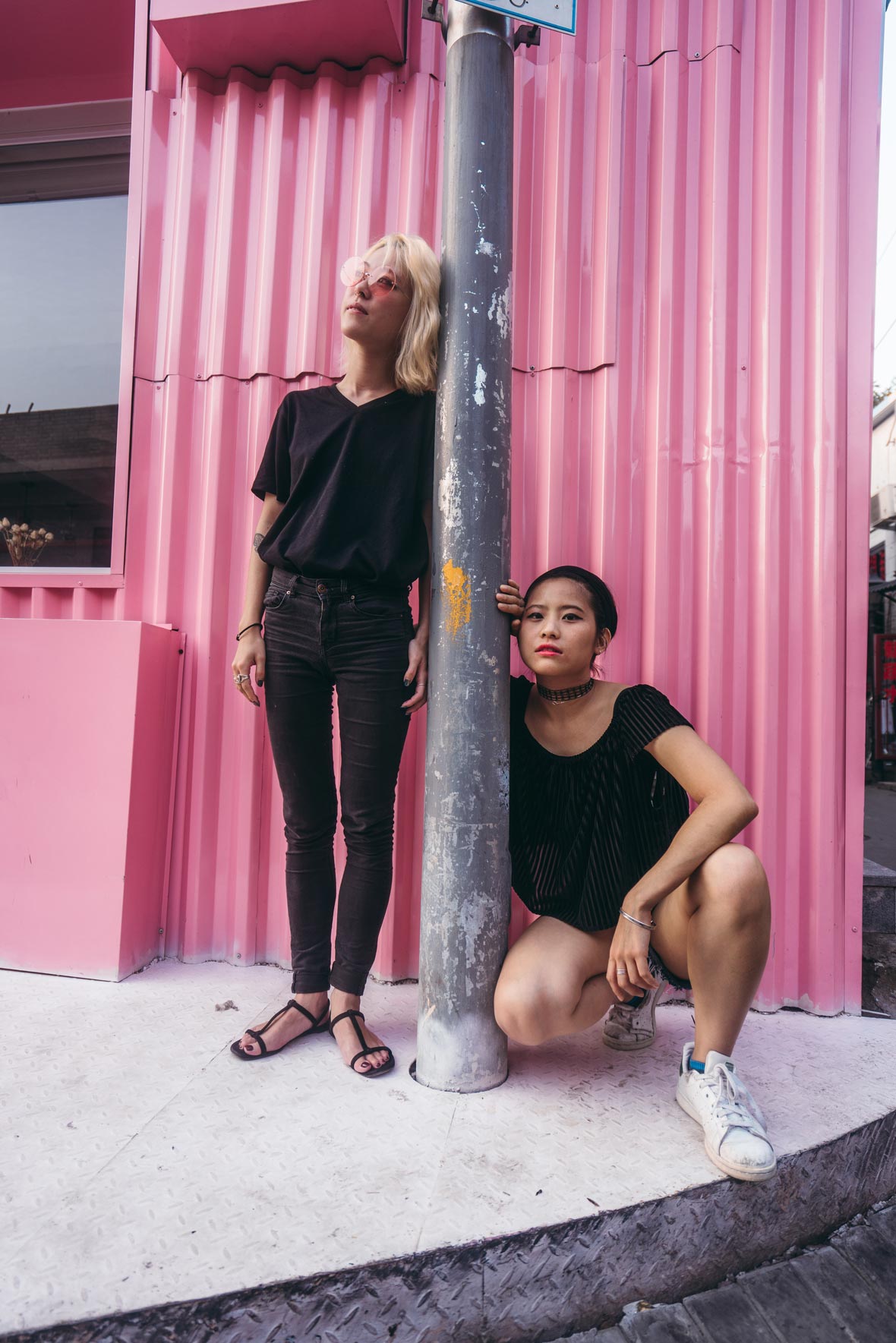 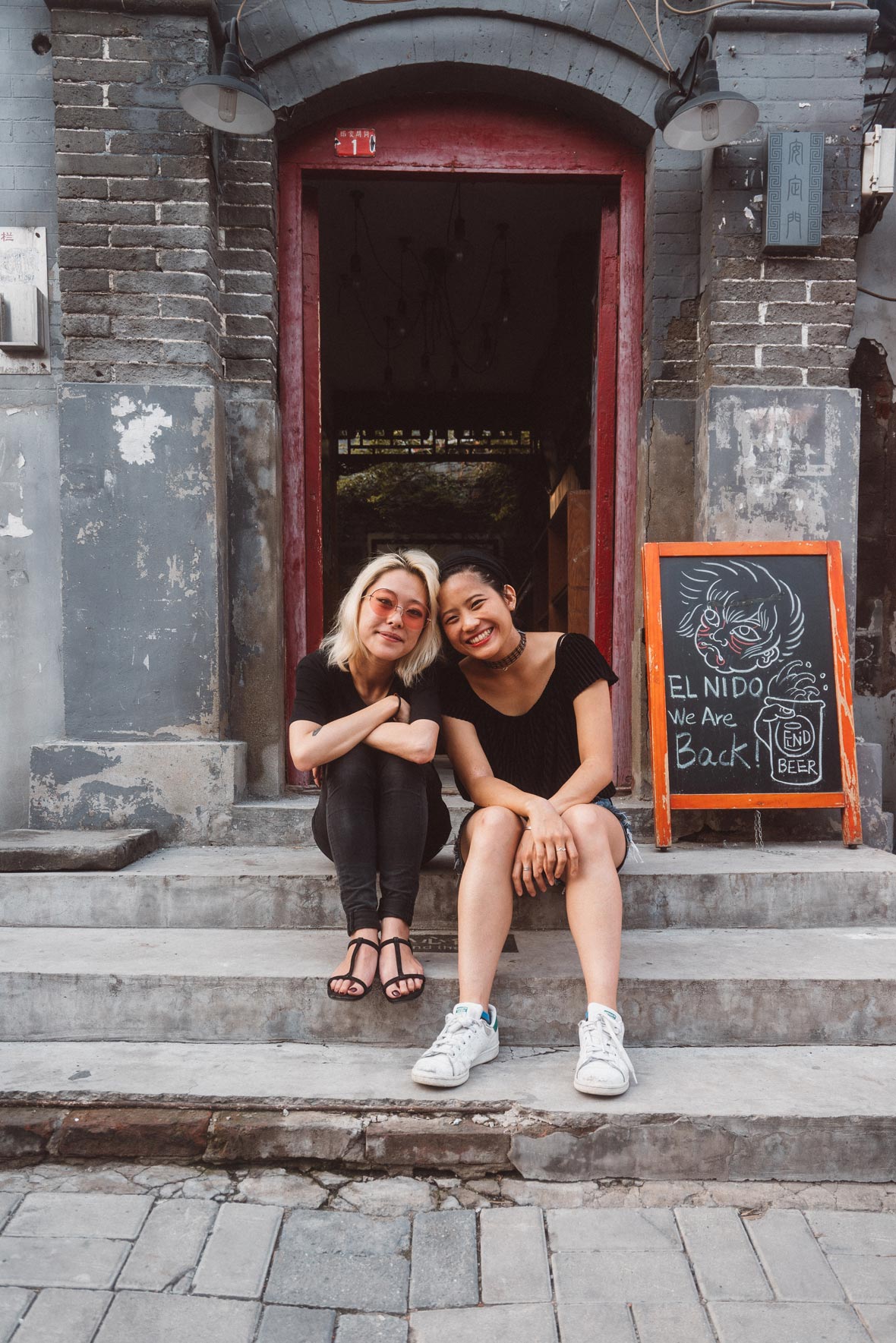