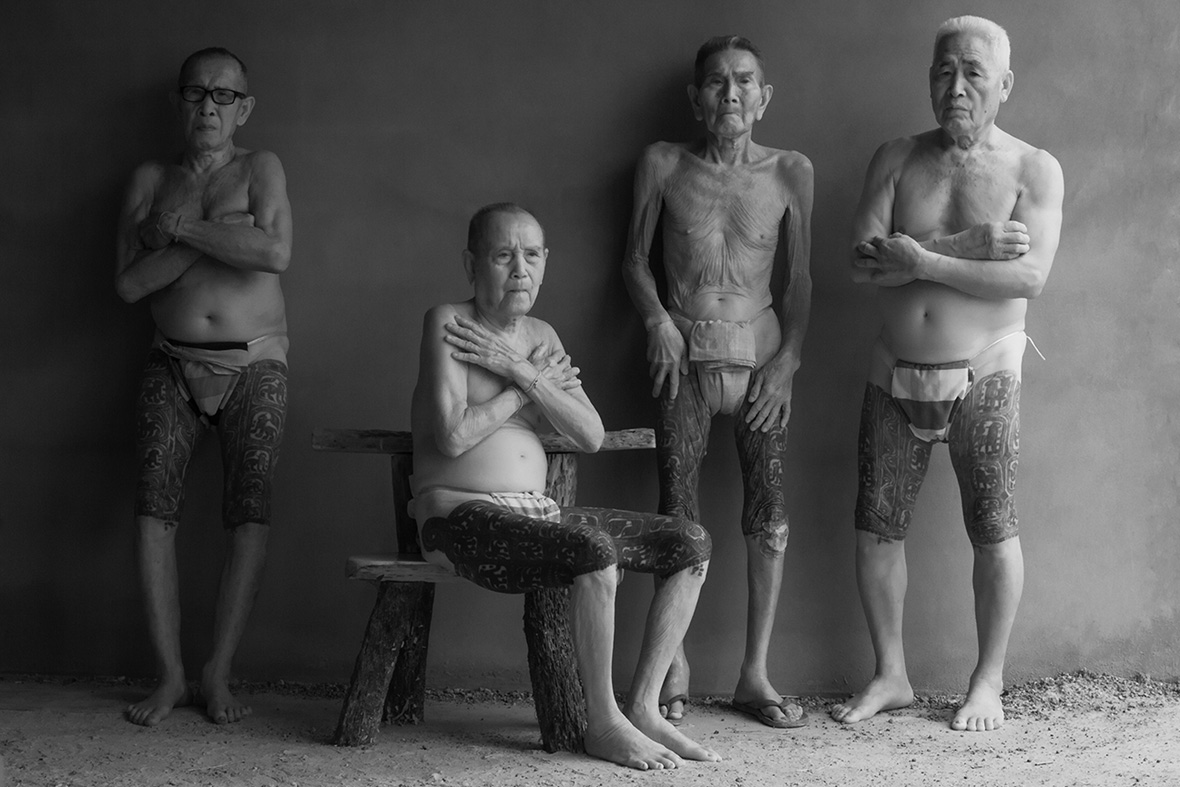 “Those with long-leg tattoos are ready to start a family.” — Siamese proverb.

Until the mid-twentieth century, it was common to see men in north and northeastern Thailand with their upper legs covered in dense tattoos. Today, however, the tradition has fallen by the wayside, and these tattoos remain only on an aging population of men between 80 and 110 years old.

To document the dying tradition, Thai artist and photographer Charnpichit Pongtongsumran spent five years searching and photographing the last of these tattooed men, a journey that’s culminated in The Spirit of Tattoo. In the first chapter of the three-part series, Sak E-san, Pongtongsumran focuses on the tattooed men living in northeast Thailand, a region also known as Isan. While he set off to document the fading art form, the series has also become a moving portrait of their pride and spirit. 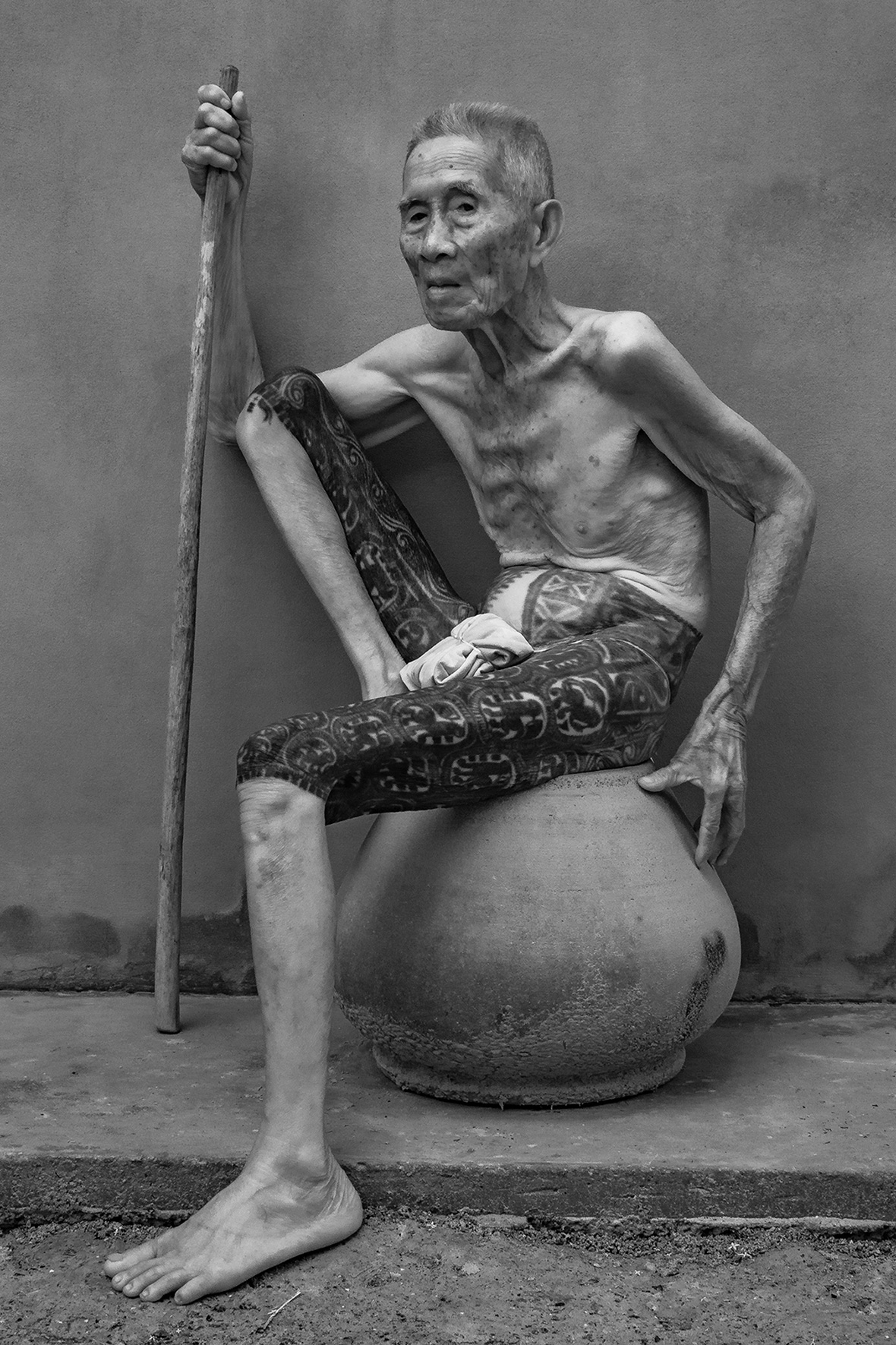 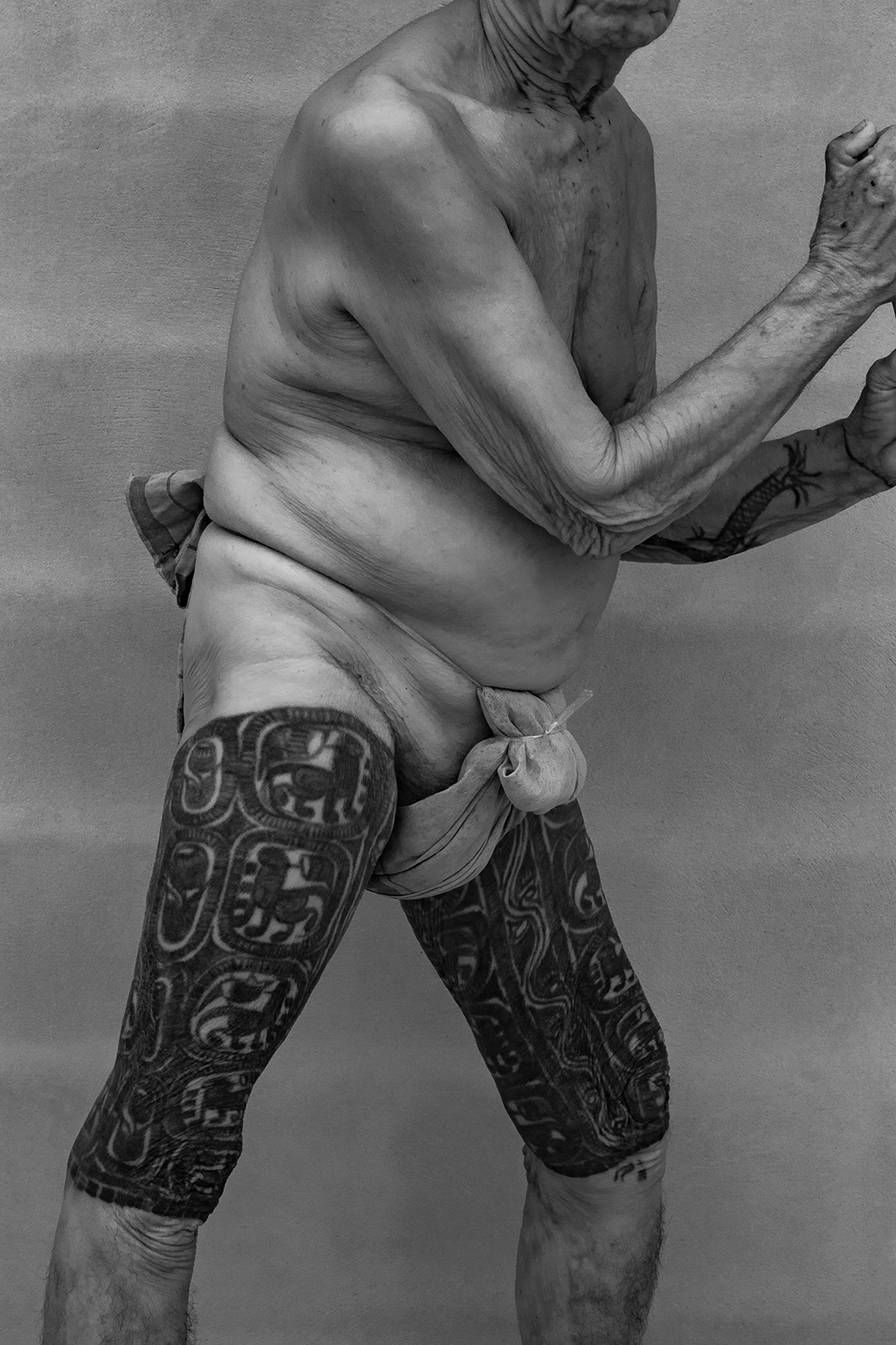 Shot in natural light against plain backgrounds, Pongtongsumran’s black-and-white photographs have a certain timelessness. The men are posed still, wearing only loincloths held by strings around their waists, as was common in the past. They expose their tattoos in their entirety, an intricate patchwork of floral patterns and mythical creatures. The wrinkled skin and bent posture of these old men are juxtaposed against their tough demeanors; they look dignified and reassured, casting penetrating gazes at the camera.

“These men used to be farmers,” Pongtongsumran says. “Now, most of them are manual workers, making wicker baskets and other handicrafts. They usually move slowly, as older people do. But, as we prepared for the photos, they became energetic.”

Pongtongsumran was born in Isan but moved to Bangkok at an early age with his parents. He doesn’t recall his time in Isan, except for the strong bond he had his grandparents, who were also farmers. In a way, this project helps him to reconnect with his long-forgotten roots. 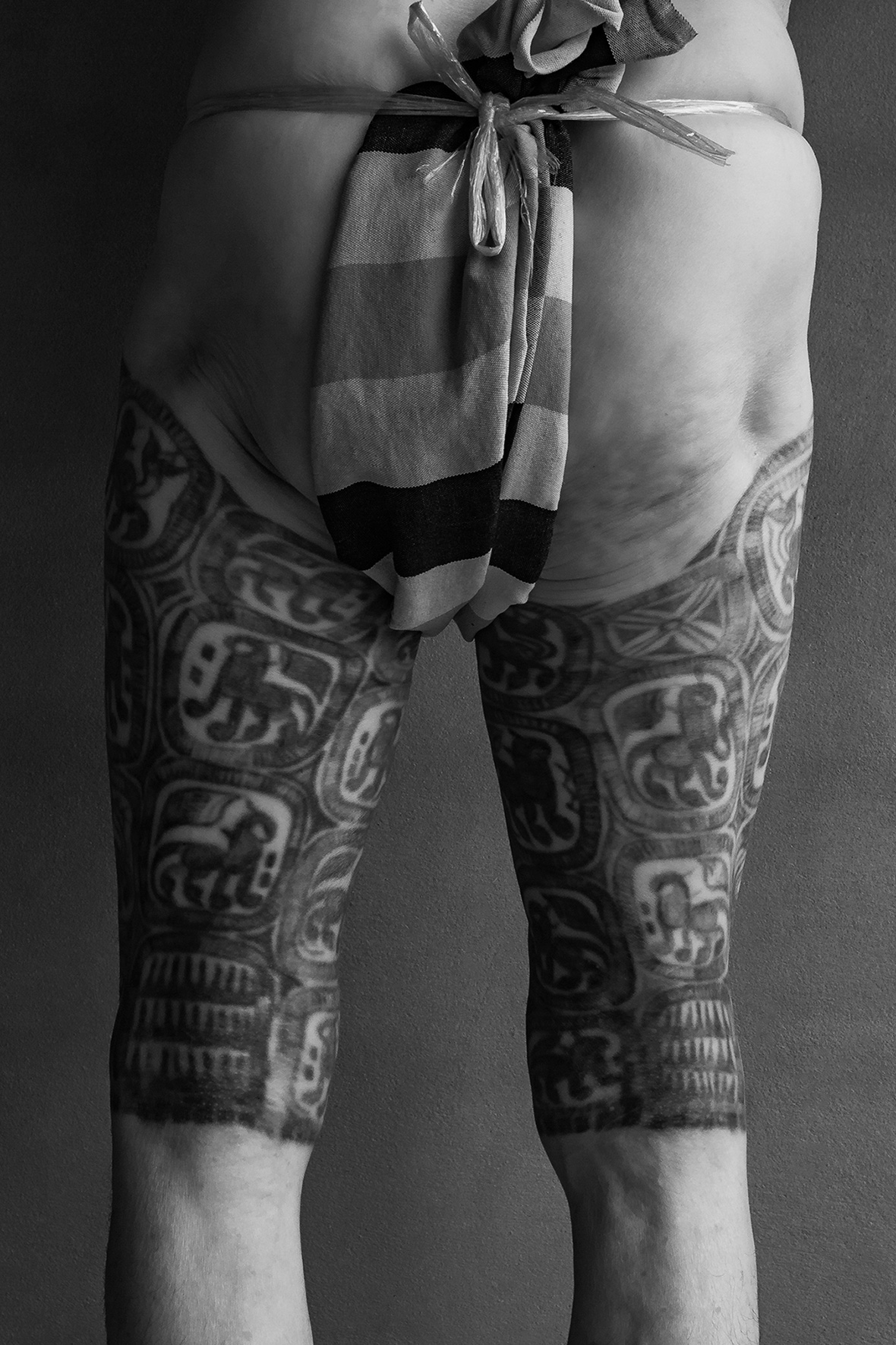 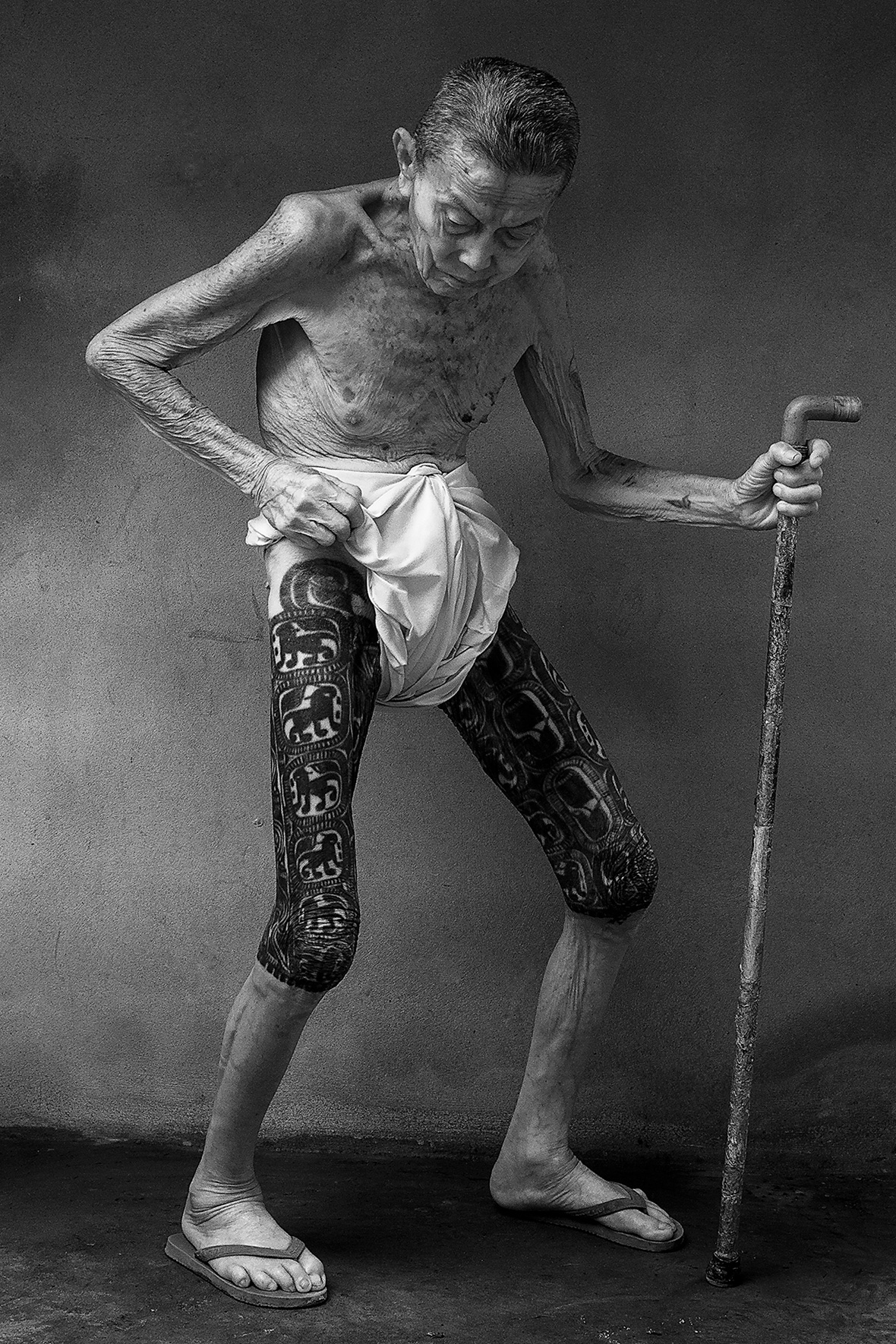 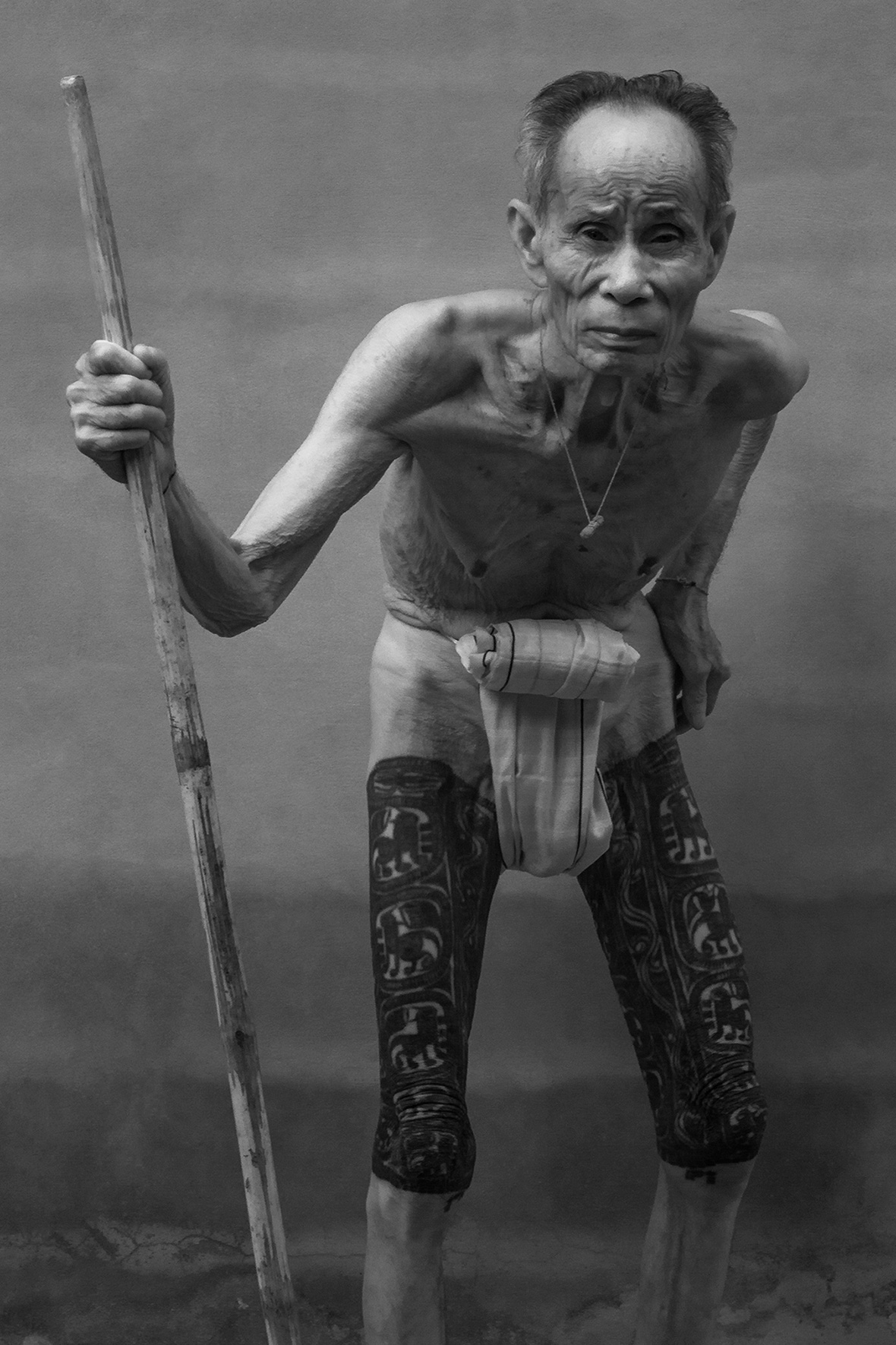 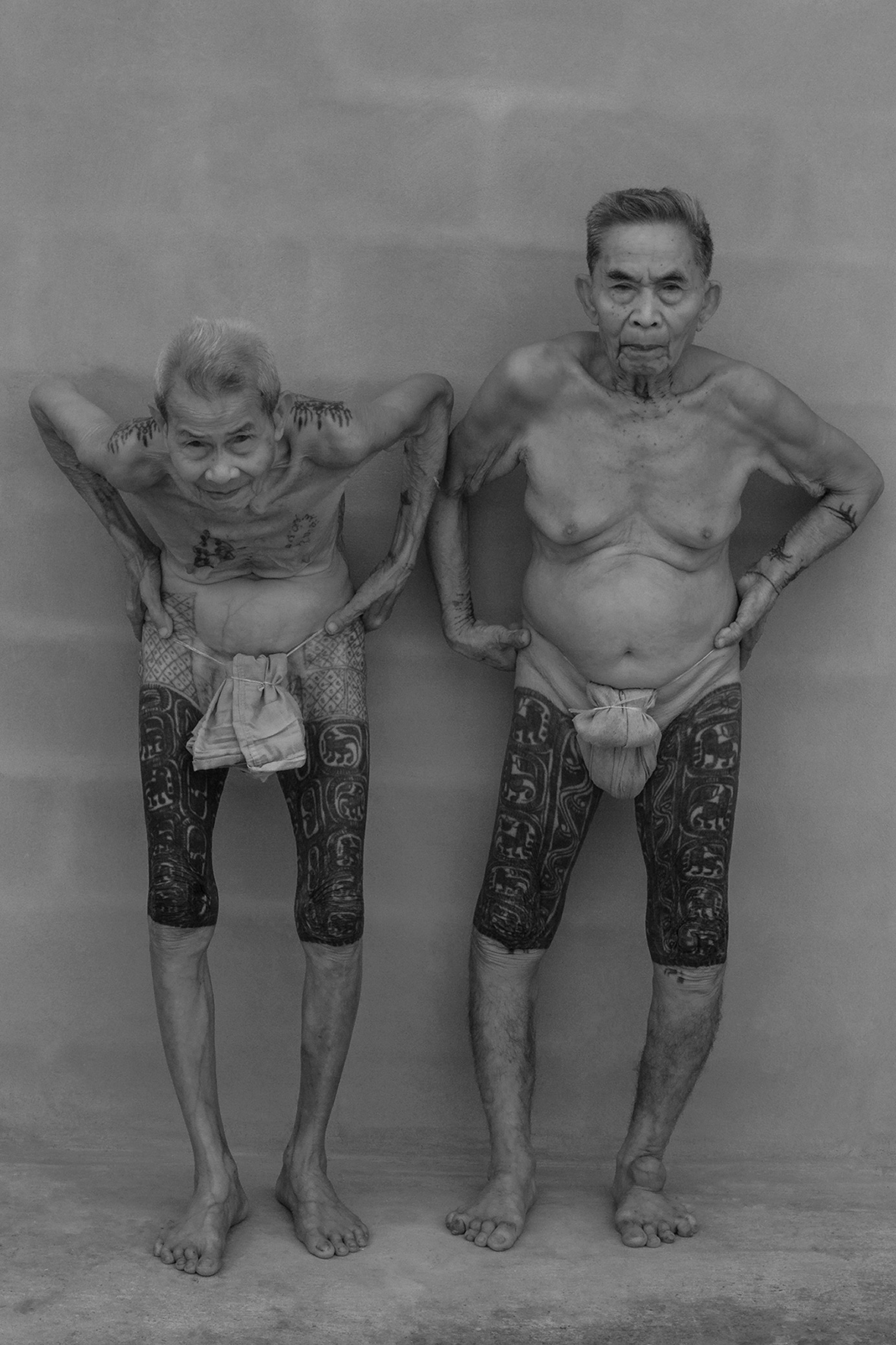 The beginning of the project was discouraging. People told him that the tattoos were common in the past, but that they had disappeared. Often, when he caught wind of someone with these tattoos, he’d end up discovering that they had already passed away.

“Once, I heard about a man who had the tattoo, but when I went to see him, I found out that he had died a month before. Another time, I traveled to meet three men, but when I reached their village, one of them had already passed away, and I ended up attending his funeral,” he says. 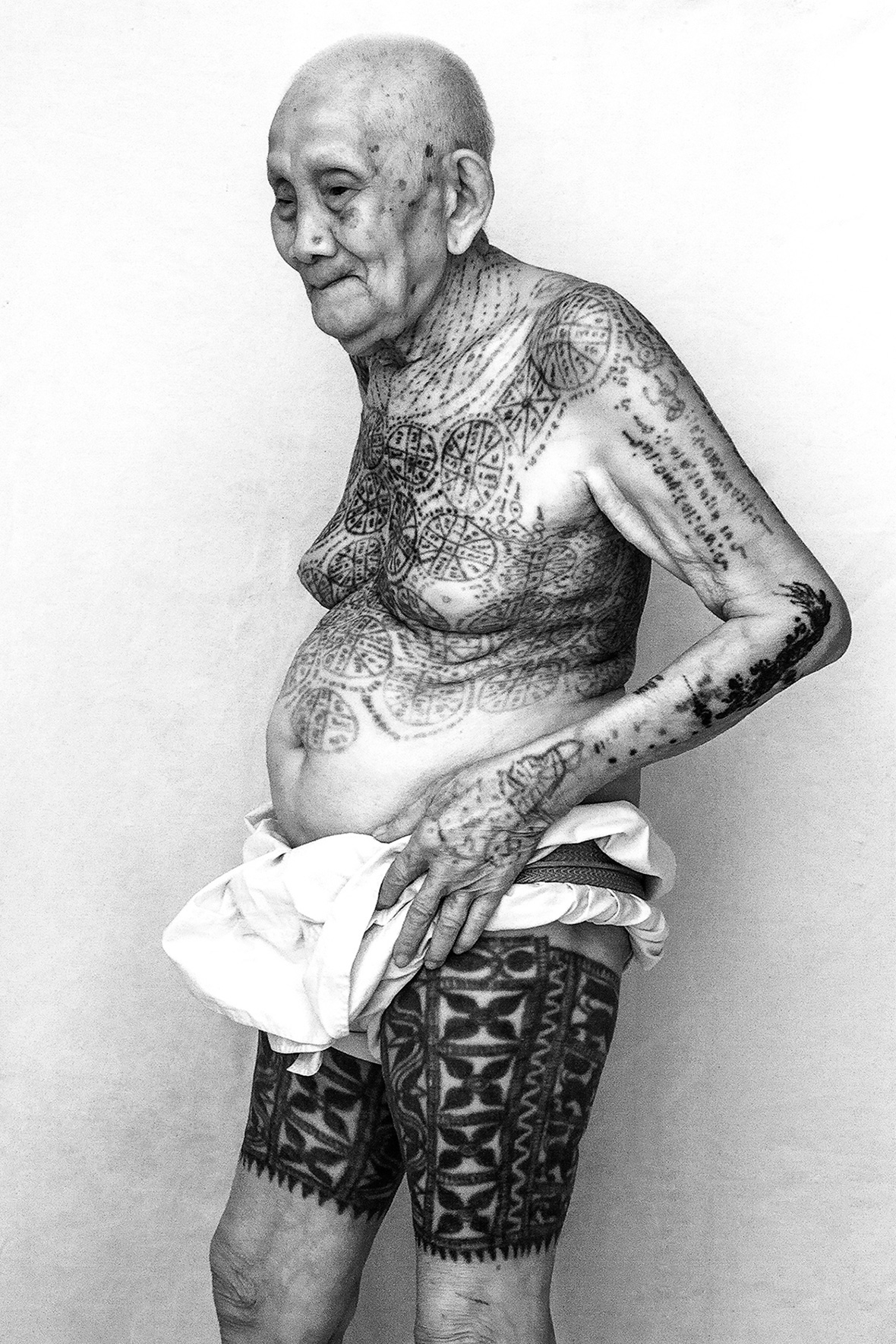 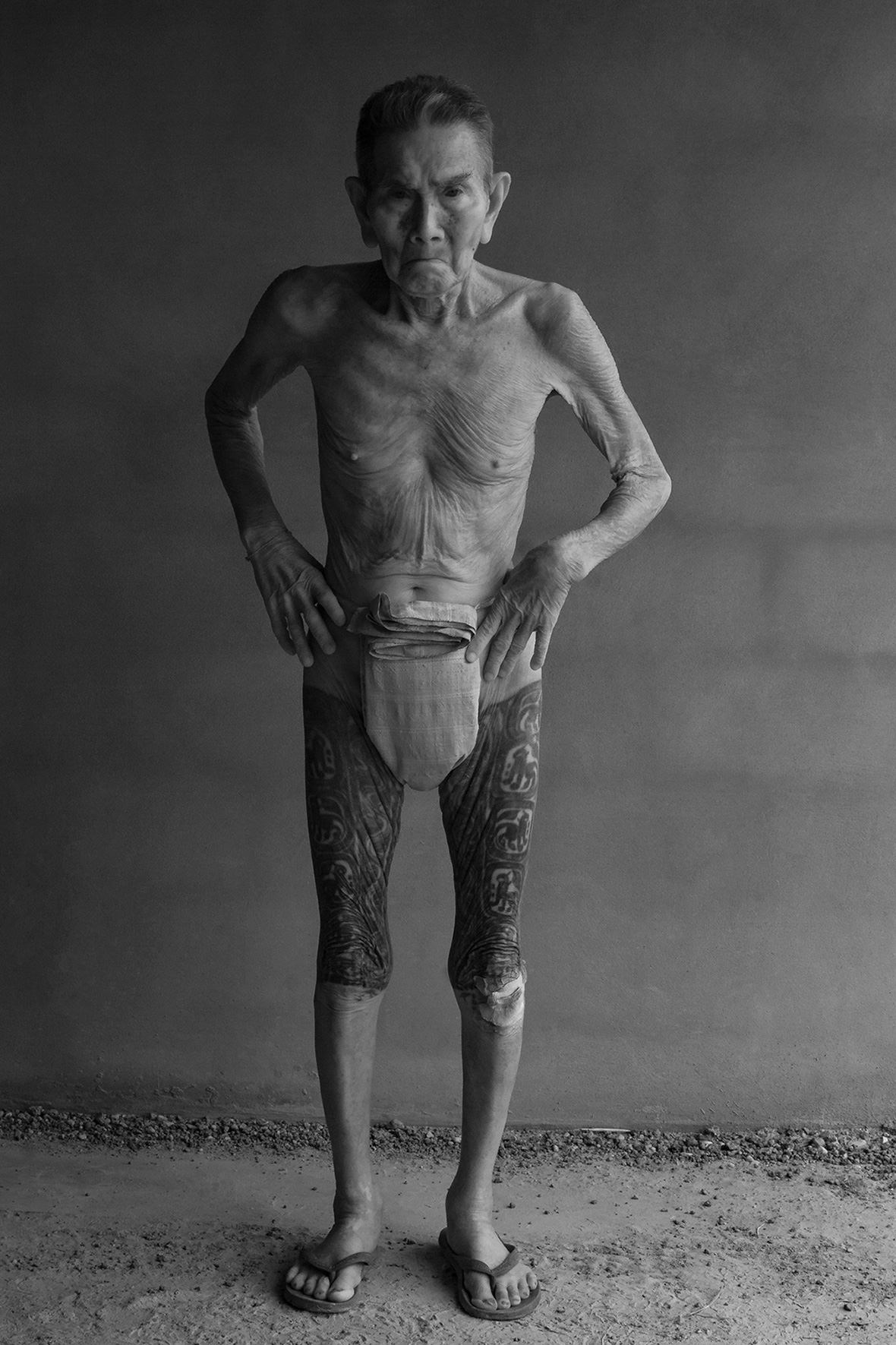 The sense of urgency was heightened by the fact that these men often still live in remote villages. Sometimes help from the local governments was required to reach them. Once he finds a tattooed man, the process of shooting arranging travel can take up to two weeks, and it was rare to find more than two men with leg tattoos in a single village.

It also happened that, sometimes, family members didn’t know about their father or grandfather’s tattoos since it was always covered by clothing. It wasn’t out of shame though. “These men didn’t think of their tattoos as something special anymore,” Pongtongsumran explains. “They were proud to discover that they had a national treasure in their bodies.” 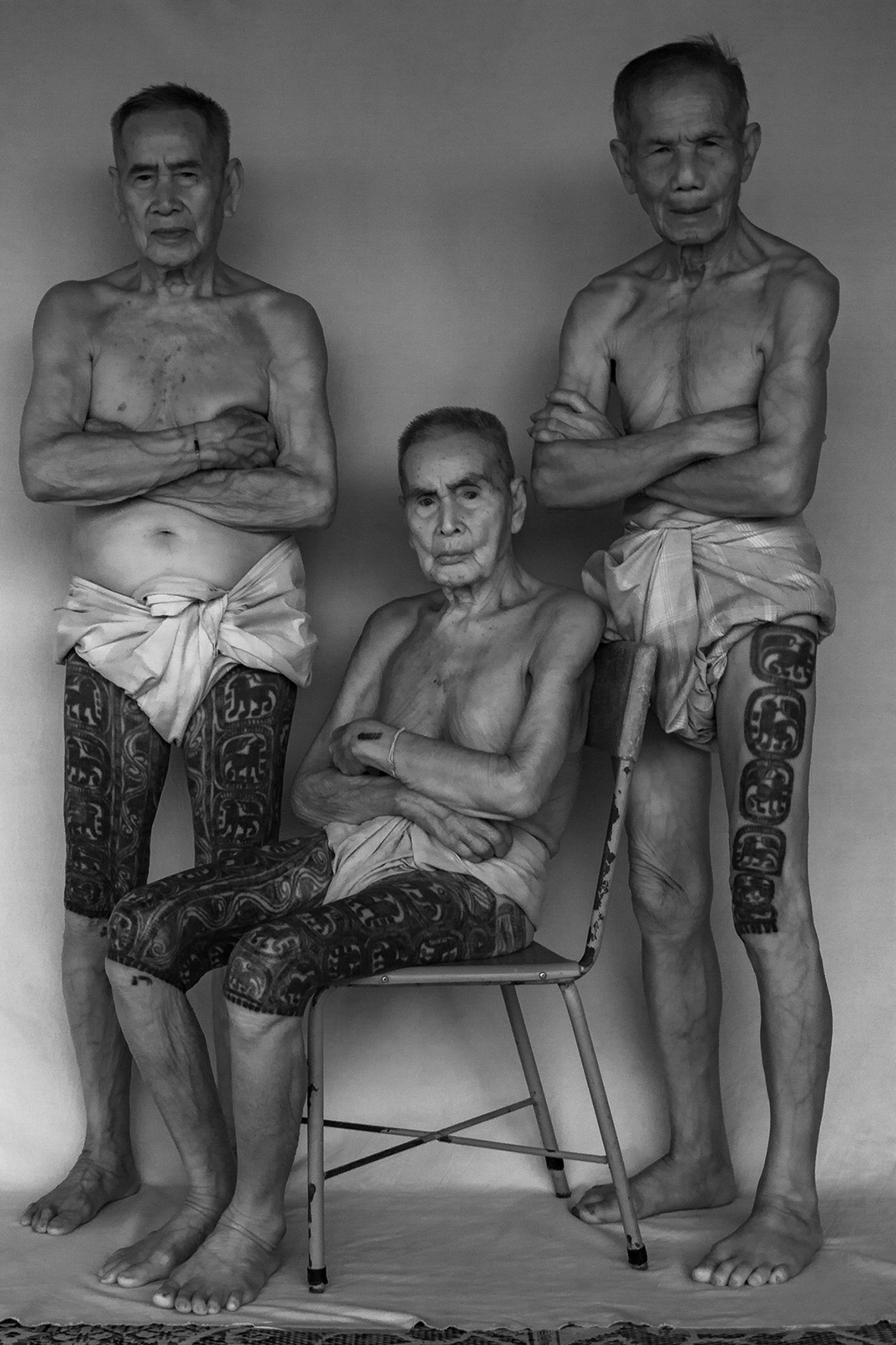 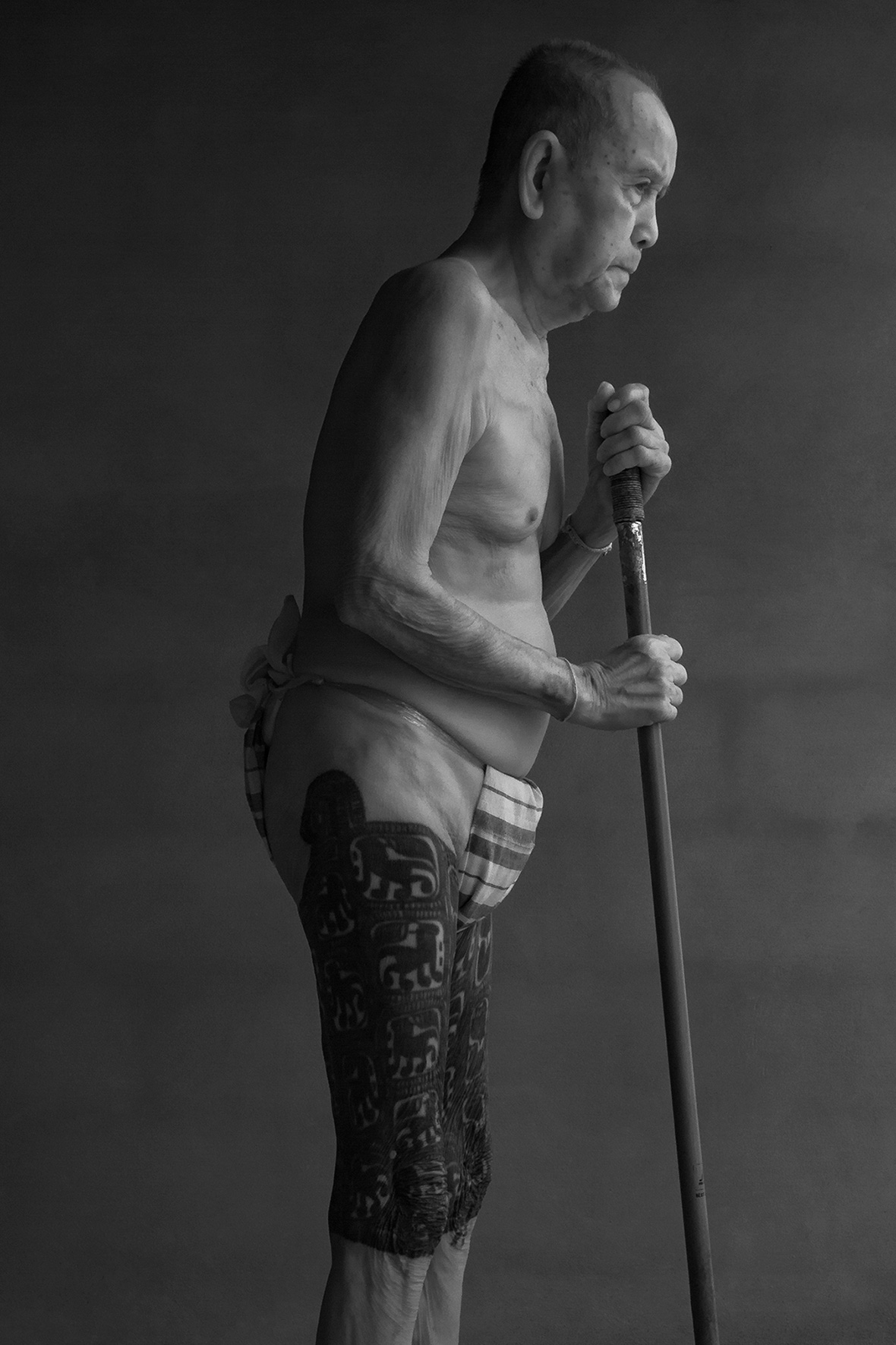 In the past, having this kind of leg tattoo was a symbol of honor for the man in the region. Aside from being a mark of their ethnicity, it was also a rite of passage for boys around 15 years old, a voluntary act in which they could prove their manhood, bravery, and patience by enduring long hours of excruciating pain. They’d lie down on a thin mat while a tattoo master, using his feet, stretched their skin and hand-poke tattoos with large, steel needles. The pigment was a mixture of soot and bile from tigers, bears, and buffalos—which gave the ink its deep, enduring blacks.

Leg tattoos also had courting purposes. From that age on, boys had to attract the woman they would marry, and these tattoos were a way to do so. But out of all the men Pongtongsumran photographed, only one appears alongside his wife, hand in hand. In most cases, either one or another had already passed away. “It felt like a wedding photo,” he grins. “They were so proud of it; no one ever photographed them like that.” 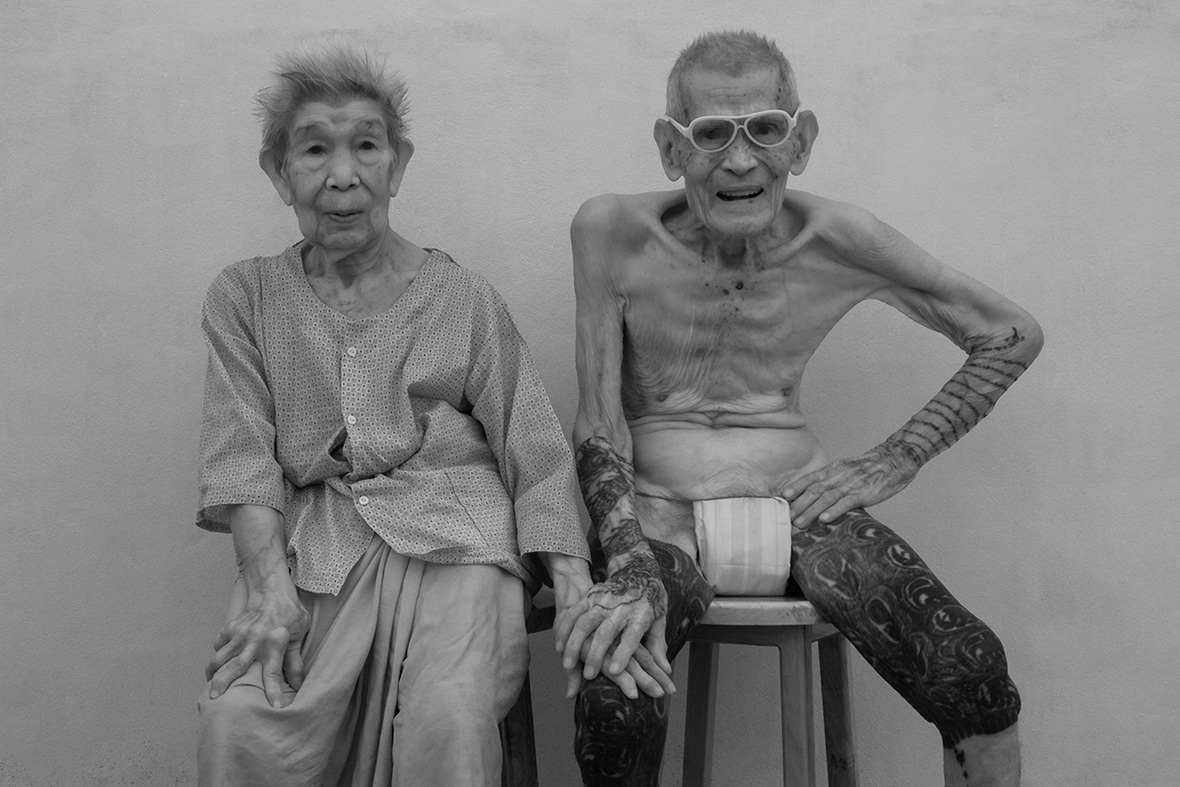 When asked about the fate of the tradition, Pongtongsumran admits that he isn’t optimistic. “It’s a delicate matter,” he says. “Young people may want to get similar tattoos. But the old masters are gone forever, and no one’s left to teach the new generations. The materials and methods have changed, and the meaning behind it has also changed. It’s not the same thing.”