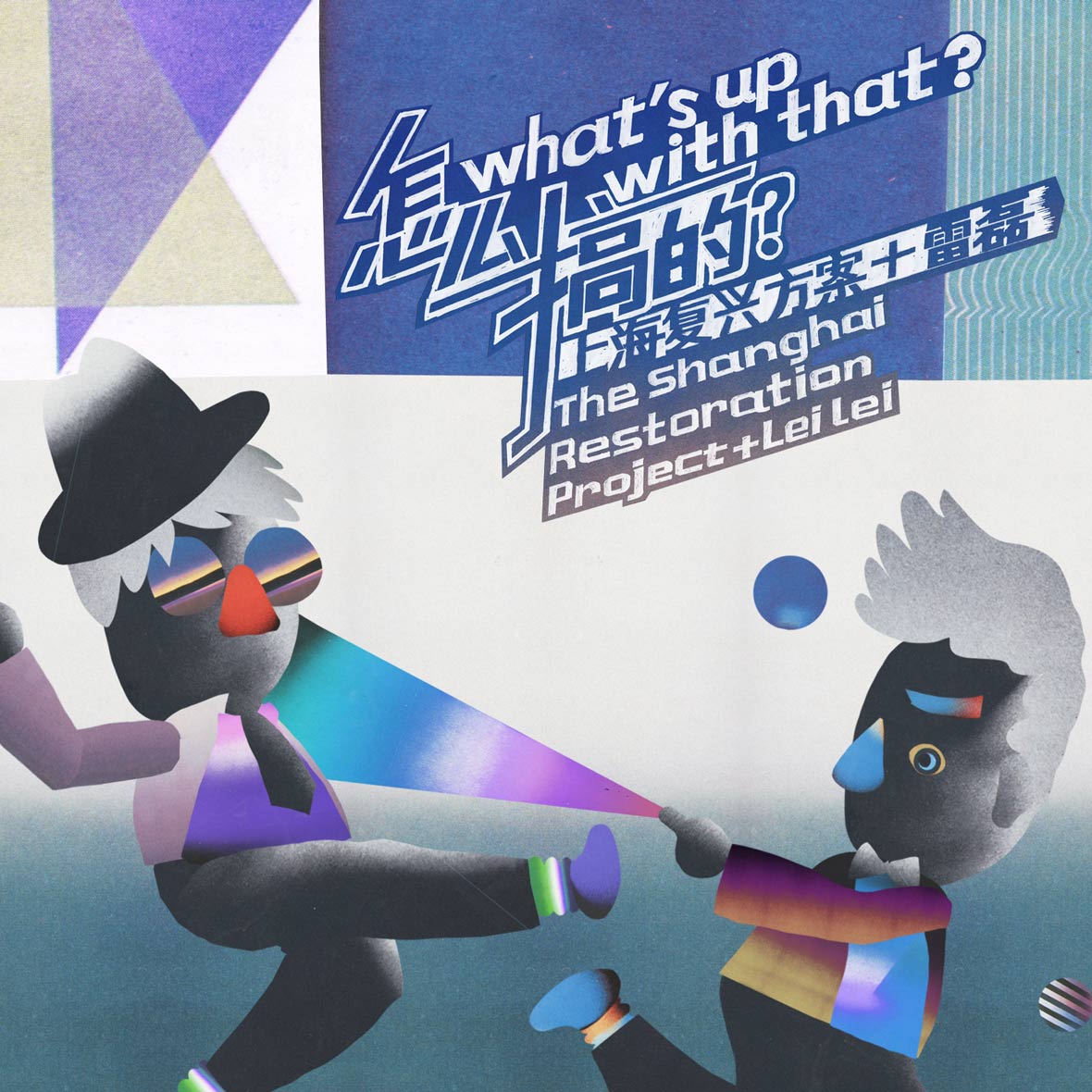 What’s Up With That? is a new multimedia collaboration between The Shanghai Restoration Project and Chinese indie animator Lei Lei. The project contemplates the seemingly inexhaustible curiosity that we all had when we were children and explores what happens to it when we all grow older. It features ten new original electronic music compositions by The Shanghai Restoration Project, which also incorporate samples taken from cassette tape recordings made by Lei Lei during his childhood. The sounds were then juxtaposed against the soundscape of adult life in today’s modern society.

The synchronized visuals from the collaborative project is comprised of animated cutouts from the book A Collection of Western Book Covers, which was introduced to Lei Lei at a very early age by his father who worked as a graphic designer in the 1980s. This multimedia collaboration, according to Lei Lei, is an exciting departure for him. Being able to perform along with Dave during live musical performances is quite different from his usual workflow as an animator, which typically involves spending many hours drawing illustrations and animating on the computer. 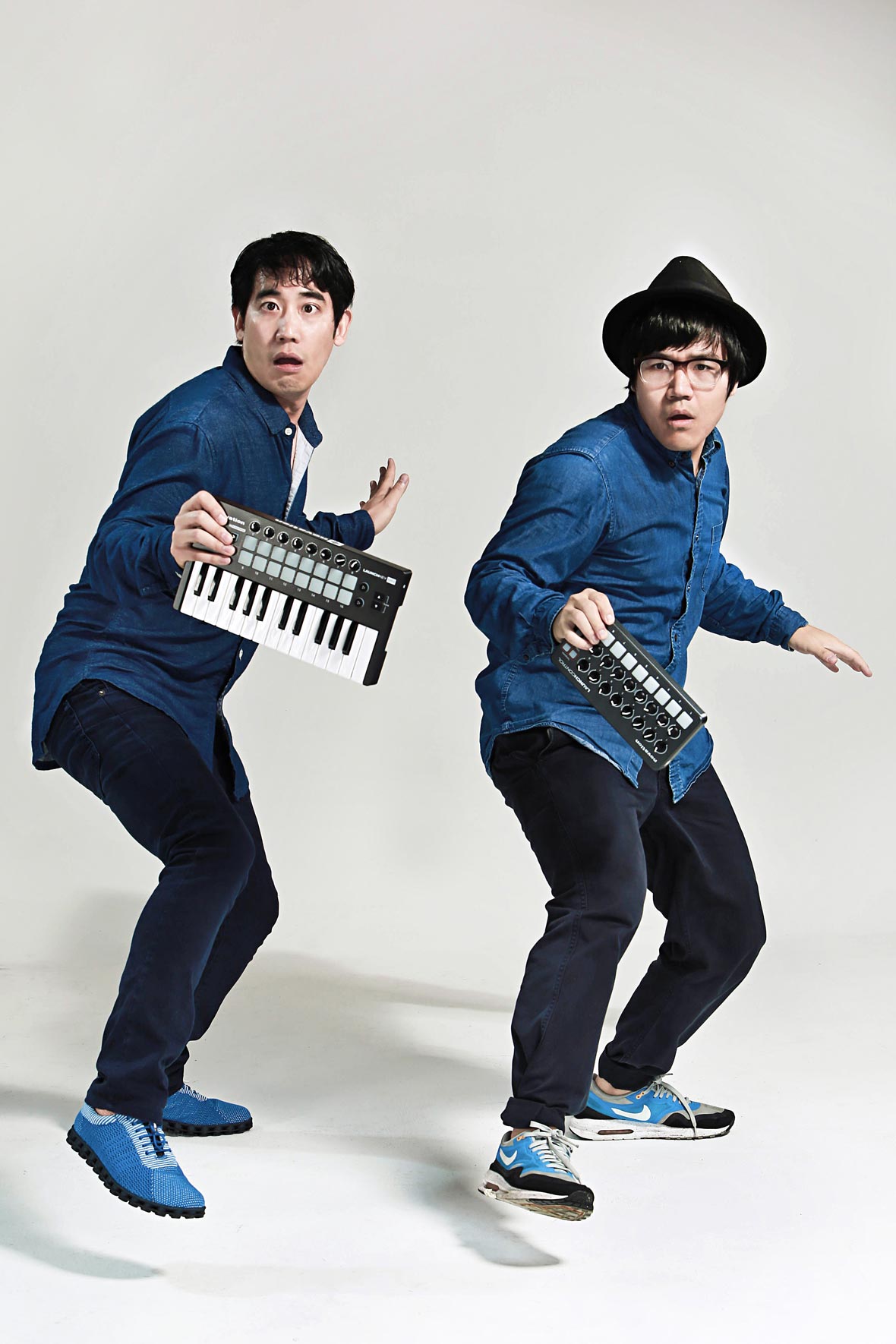 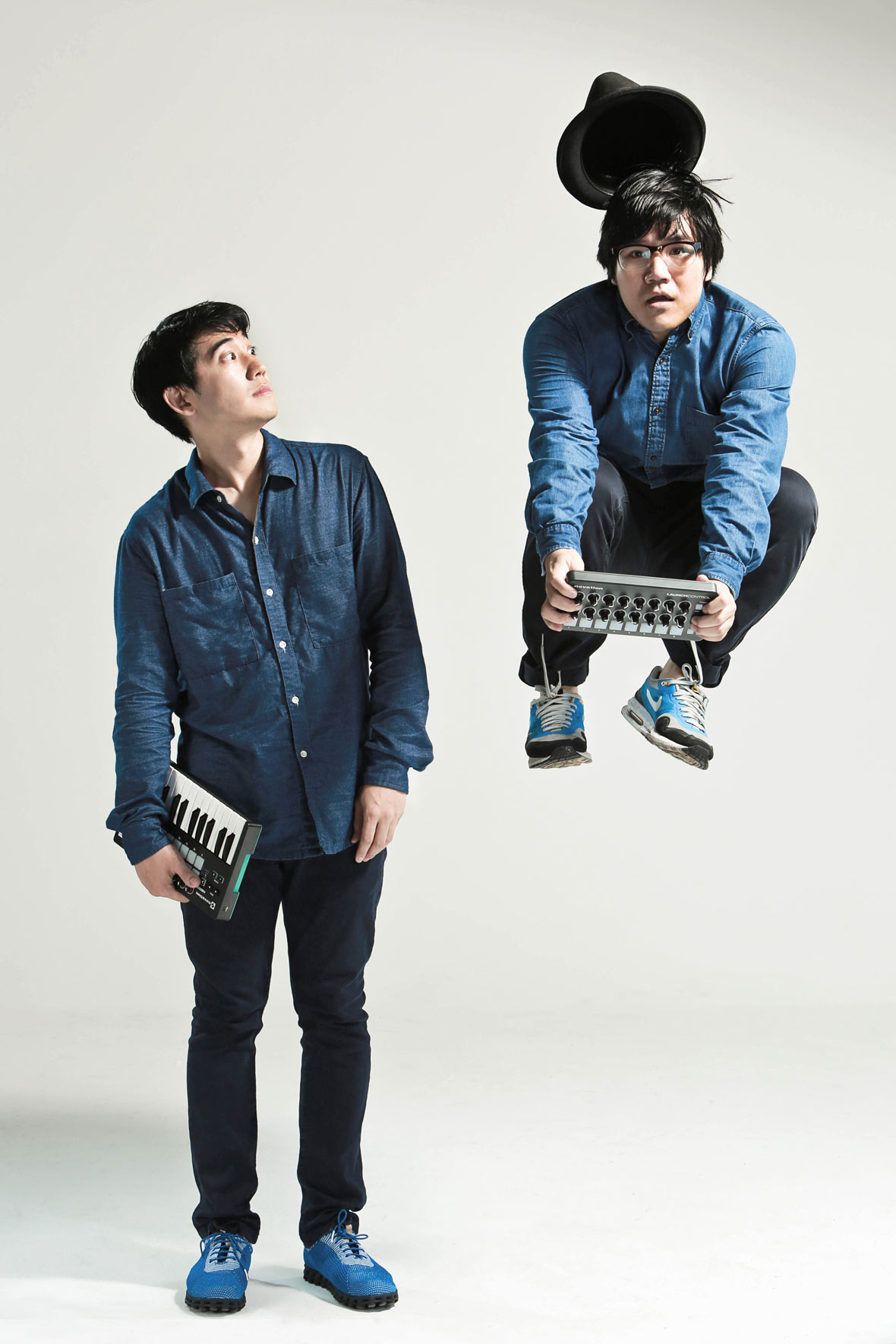 Take a listen to a selection of our favorite tracks taken from the record here:

Read more about the collaboration below in our exclusive interview with Lei Lei and Dave Liang from The Shanghai Restoration Project. 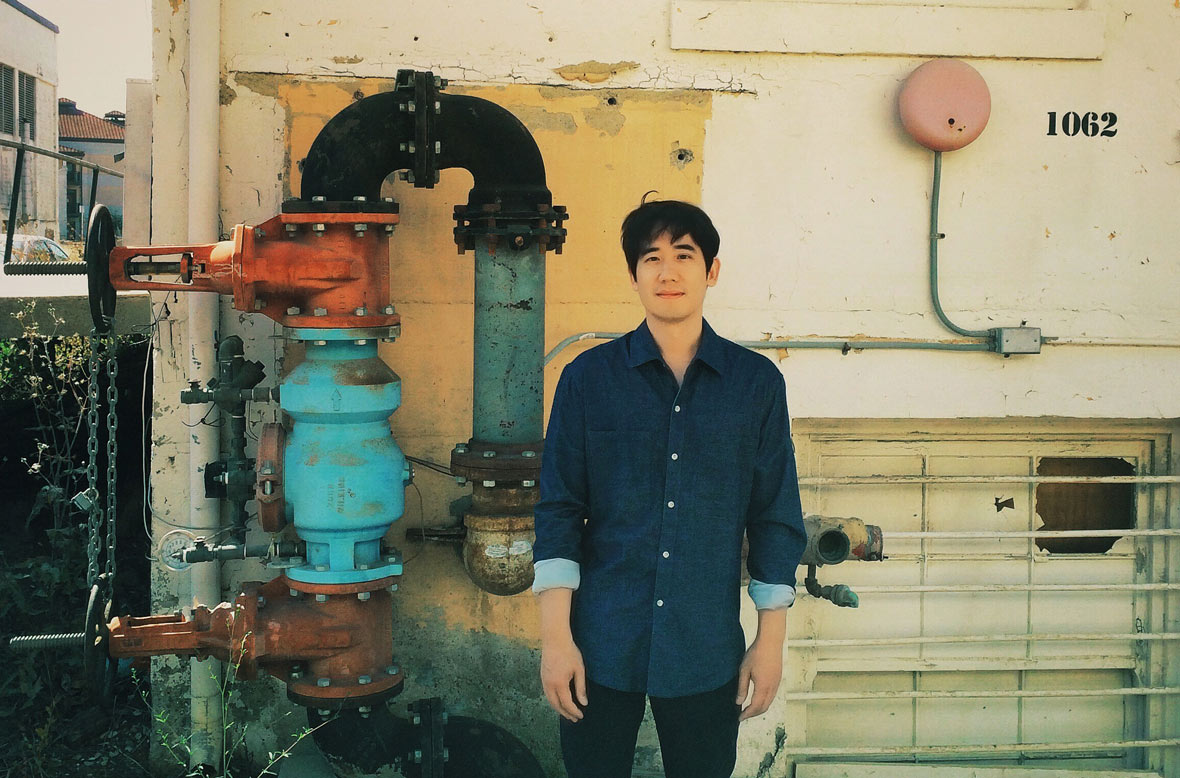 Neocha: How did this collaboration come about? How did you both meet?

Dave: I first heard about Lei Lei through Neocha founder Sean Leow and found his work fascinating. Growing up in America, most of the animation I was exposed to was very corporatized (for example, Disney, Pixar, etc.), so the individualism of Lei Lei’s work really resonated with me. A few years later, I was introduced to him in person by the visual artist Sun Yunfan. He was in New York City for a few days and even stayed over at my place, where he would show me his latest animations and we would also jam together over tracks that I was putting together – he’s a really clever freestyle rapper! 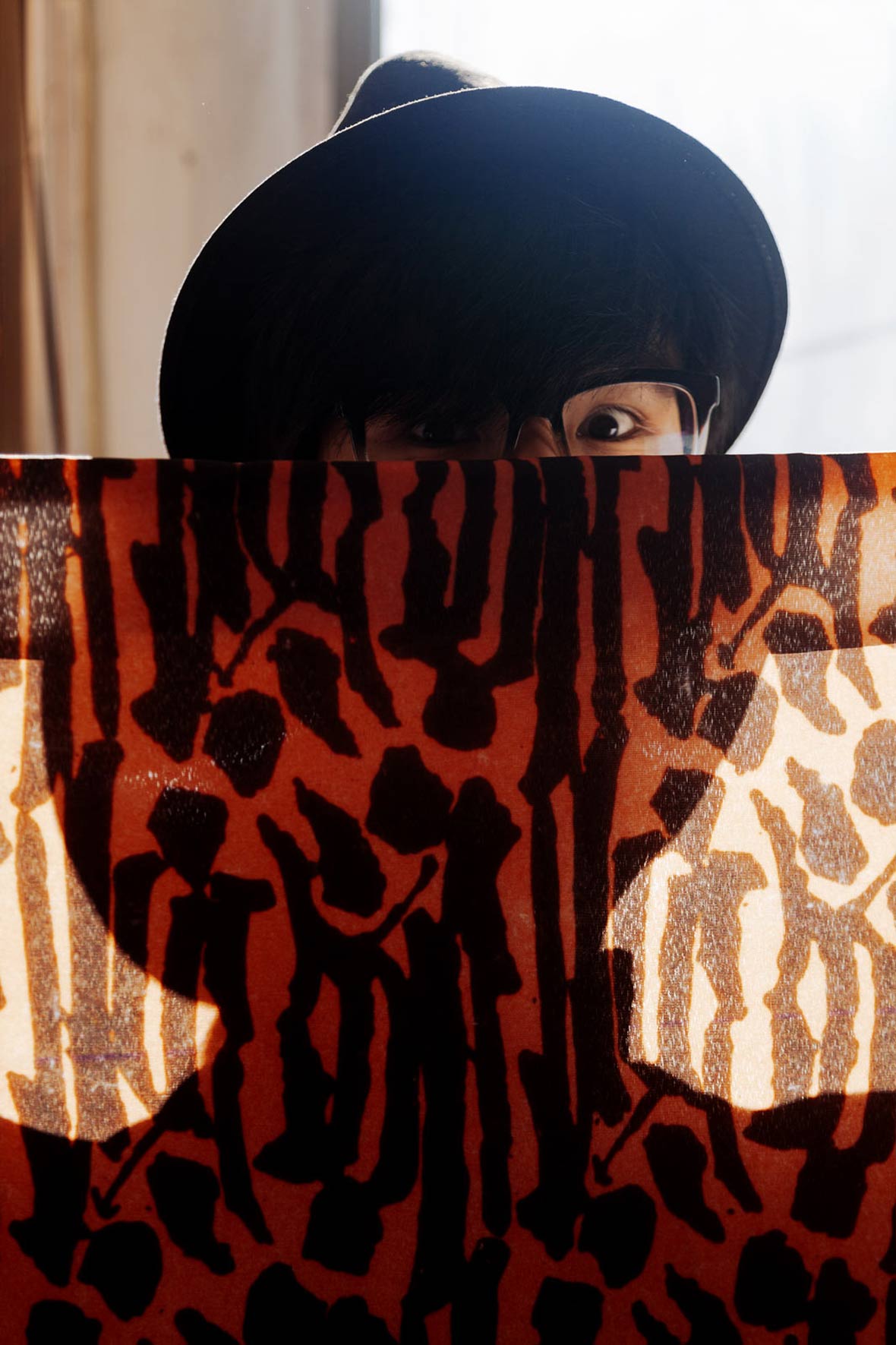 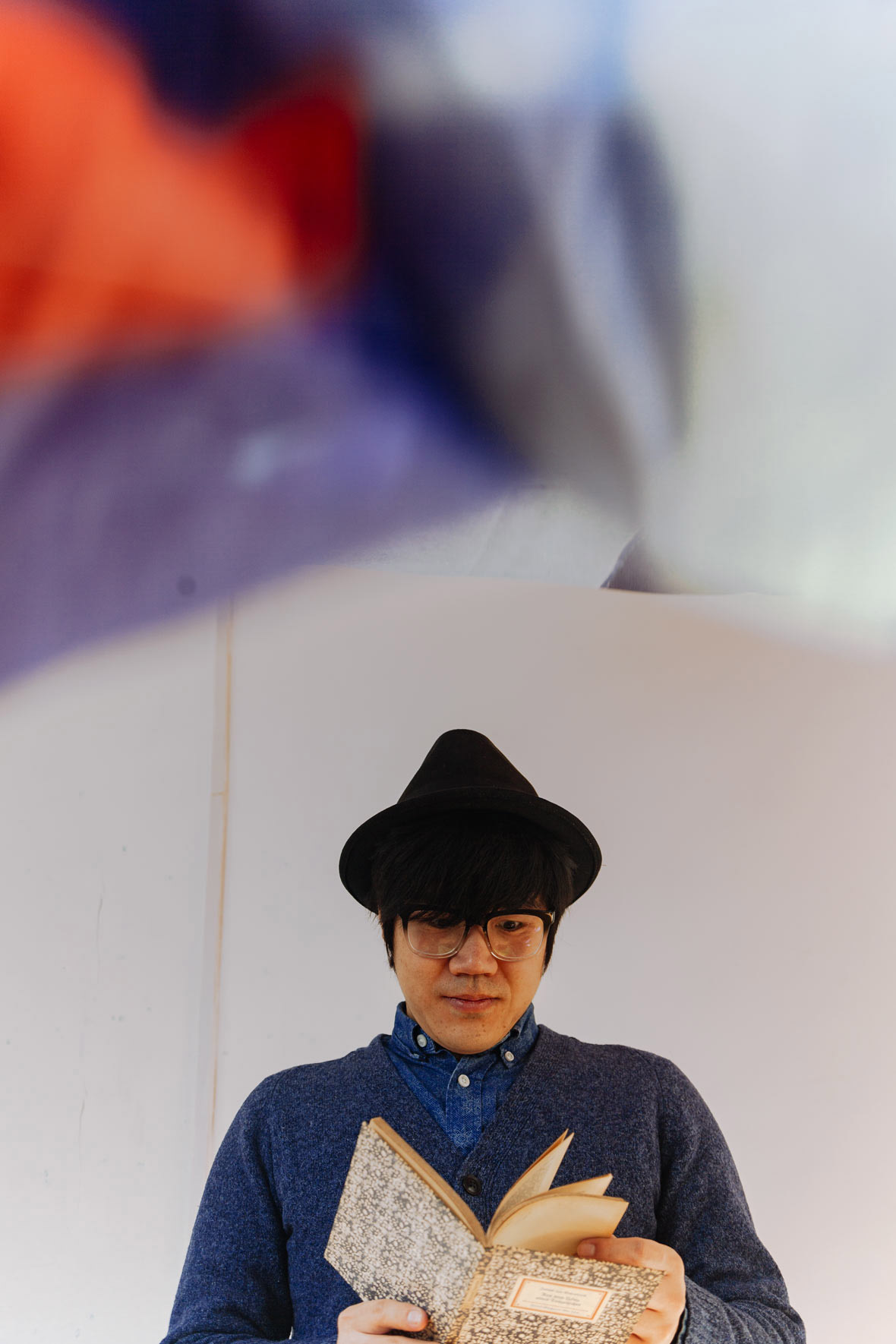 Lei Lei: I actually met Dave before in New York City, and had already heard a lot of his music. At that time, we had some ideas to collaborate on a music project. I was a special guest rapper at some of his Beijing and New York shows – slowly after that, we got to know each other.

Last year, when I went back to my hometown, Jiangxi, I discovered a bunch of old cassette tape recordings from when I was three years old. I listened to them and found them really interesting! So then I shared what was on the cassette tapes with Dave, and he became as excited as a kid in a candy shop. He later sampled and edited the sounds from the tapes and used his own music to spin everything together into a completely new story.

And just like that, we started to prepare and put together some fun stuff to do for our live performances. I actually did a lot of research on one of my dad’s old books called A Collection of Western Book Covers – it was published back in 1988 and it compiled a lot of international book cover designs. At the time, the book was put out to show Chinese designers some of the better new design concepts from the West. So then I used all the graphics and stuff that they made in 1988 and turned them into an animation. I used some clips from it in this collaboration with Dave and matched the clips with the mood of his music. Some of the parts are more abstract and some are more obvious. So that is pretty much how What’s Up With That? came about – the visuals and sounds from the live performances are from 1988. We just created a completely brand new story through editing and remixing all of those different elements. 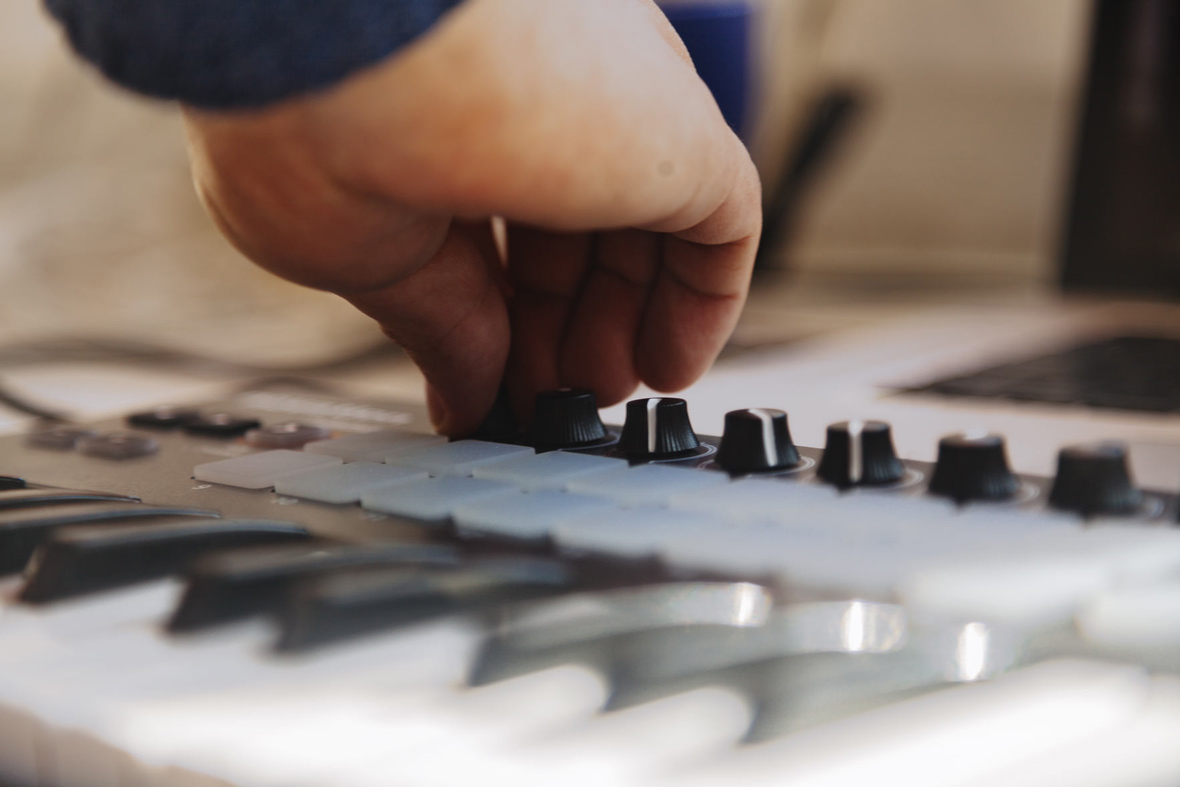 Neocha: What was it like collaborating on this project? Tell us about the process, and how was this different from your usual projects?

Dave: Lei Lei and I would hang out a lot in New York City during his residency. We liked each other’s artistic style and wanted to find a way to collaborate. One time he was telling me about his childhood in Nanchang, and it sounded very different from his current life in Beijing. We thought that it might be interesting to explore his childhood and see if that led us anywhere. On the visual side, Lei Lei started playing around with some animated cutouts from the above mentioned book. On the audio side, he dug up these three cassette tapes. When he was three years old, Lei Lei’s parents had recorded him making funny sounds, telling stories, reciting random poems, and singing songs. The tapes also contained theme songs from television and radio programs at the time, as well as sounds from everyday life, like phone calls, and so on. After we converted the tapes to digital, I went through and extracted the sounds that jumped out at me and created some basic tracks from them. I would then send them to Lei Lei in Beijing and he would send over new animated clips he was working on to me in New York. 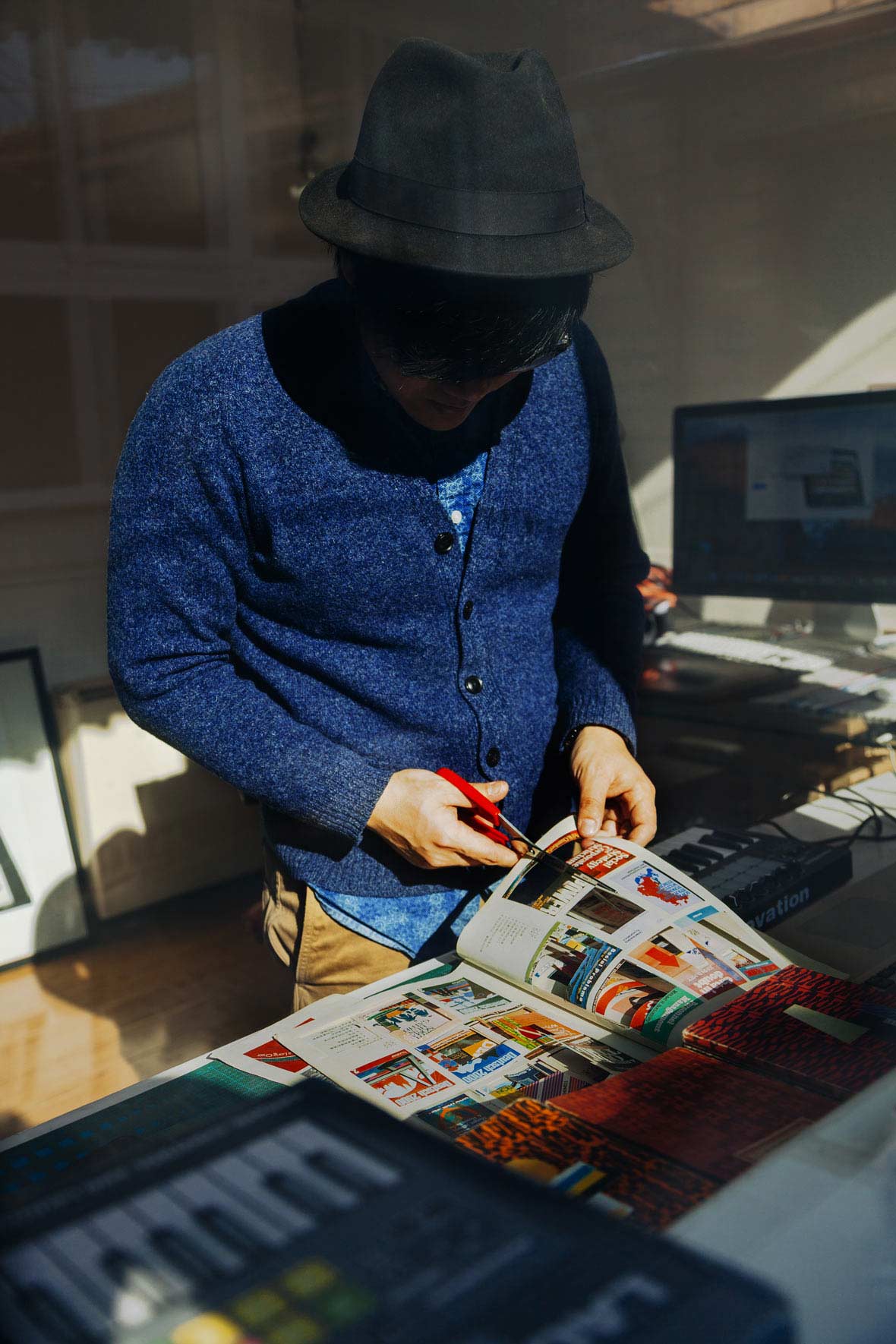 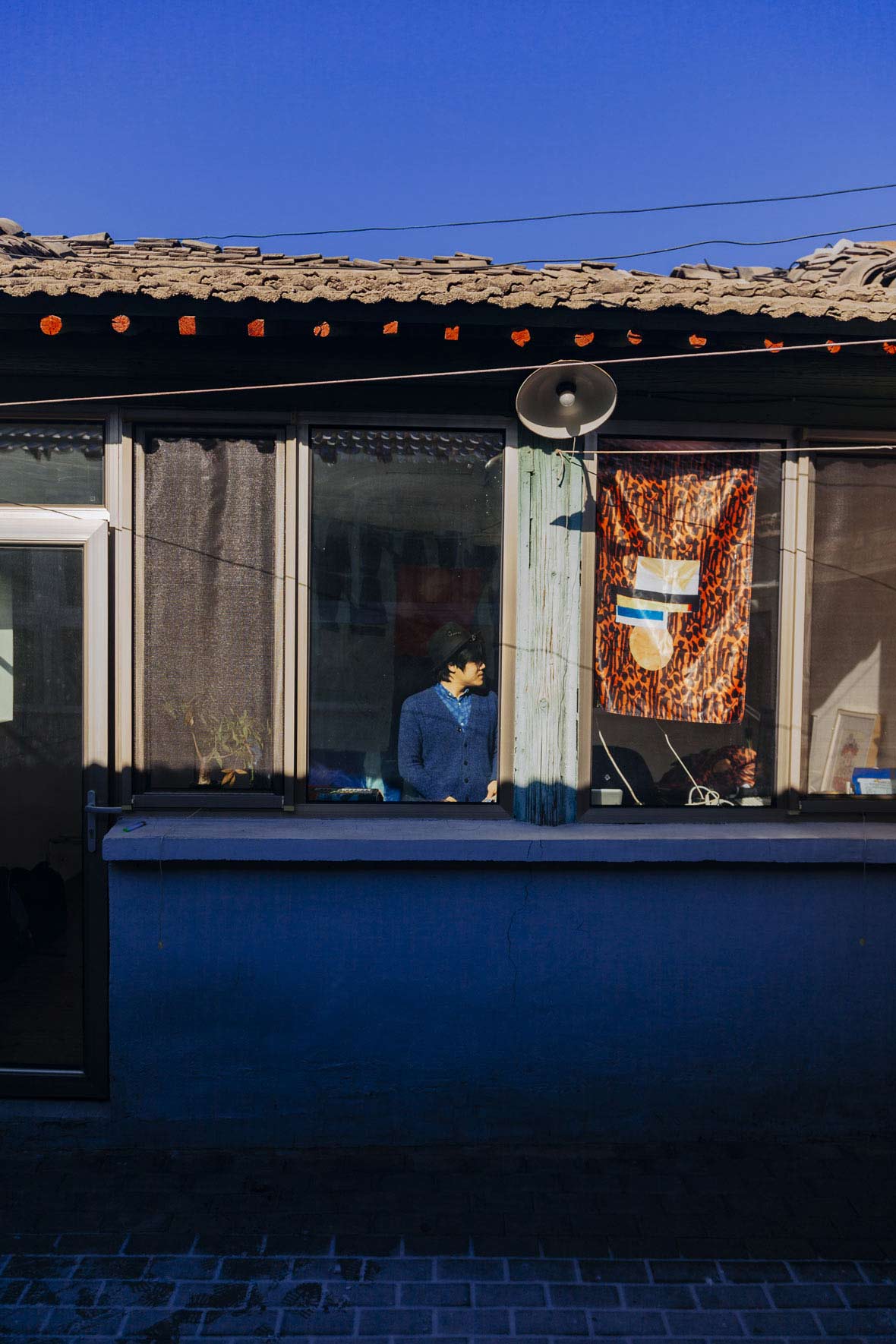 Lei Lei: I think the main reason this collaboration between Dave and I happened was because we were both really open to do different things. Both of us enjoy the process of working with different artists. Dave has collaborated with Jazz singer Zhang Le and various Indian musicians for different projects that ended up being amazing. I have also worked with Ou Ning, an art curator; Thomas Sauvin, a collector of French art; as well as numerous artists from different fields. That’s how we knew a collaboration between us would work out.

Even though Dave primarily handled the music while I handled the visual aspects for this collaboration, our way of thinking is quite similar, so we were on the same page the whole time. Dave is an incredible musician. The origins of material is very important to both of us; we like to deconstruct older works and reconstruct it into something completely new. Even though the two of us grew up in very different environments, we still share the same issues of being overly self-aware and trying to figure out our identity in society. So through this project we try to find answers to these questions.

Of course, this project is really different from my past work. Sometimes just doing animation work can feel boring and mechanical, because I’m just sitting in front of the computer making drawings over and over again. Being a part of a live musical performance with Dave is something really exciting for me. Performing live you can get an immediate reaction from an audience, which is very different from doing animations or illustrations. 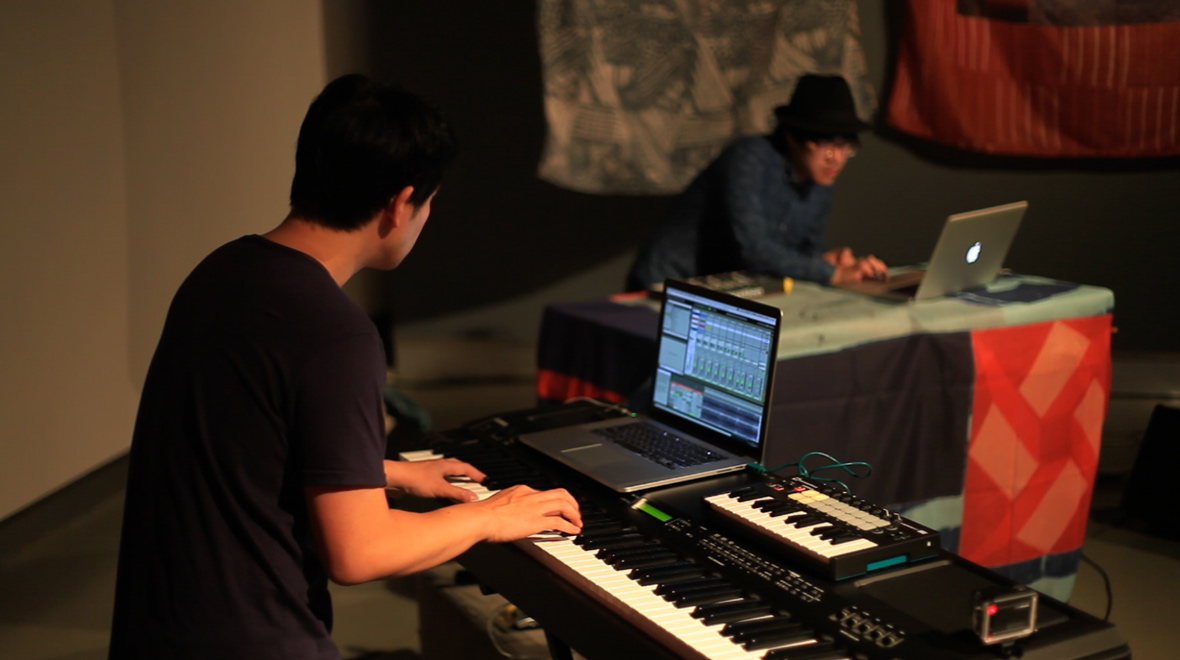 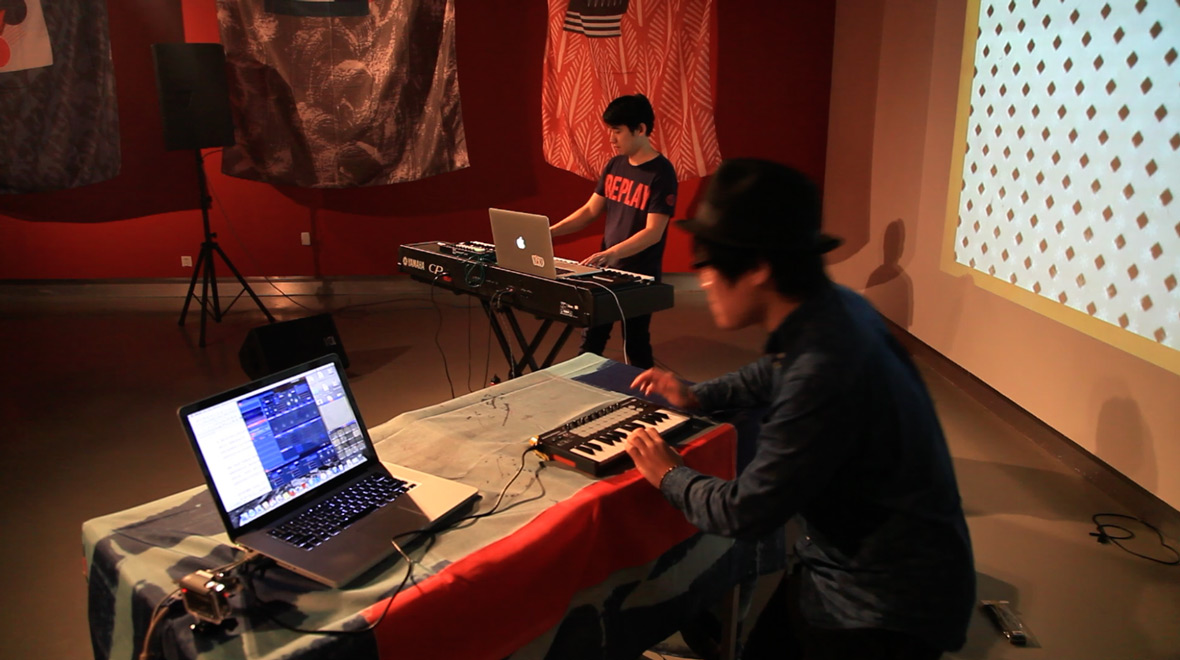 Neocha: What did you enjoy about the collaboration process?

Dave: Lei Lei is a really quirky guy and this makes for a fun partnership. Once we were at a gallery watching an animated short and he started making sound effects out loud as if he was providing the soundtrack. Another time we were at a Knicks game and he was commenting on the shapes of the players’ bodies as if they were cartoon characters in a future animation of his. I’m sure these quirks and carefree attitude towards life influenced some of my production choices for this project. Also, when we perform live, Lei Lei often whips out a signature combination of up-down, side-side moves that audiences really like.

Lei Lei: Two things. The first thing being what I mentioned earlier: being able to incorporate my art into a live performance is really exciting for me. The second is the aspect of being able to share my experiences. Having the chance to share my memories and cassette tapes from my childhood with other artists is wonderful. 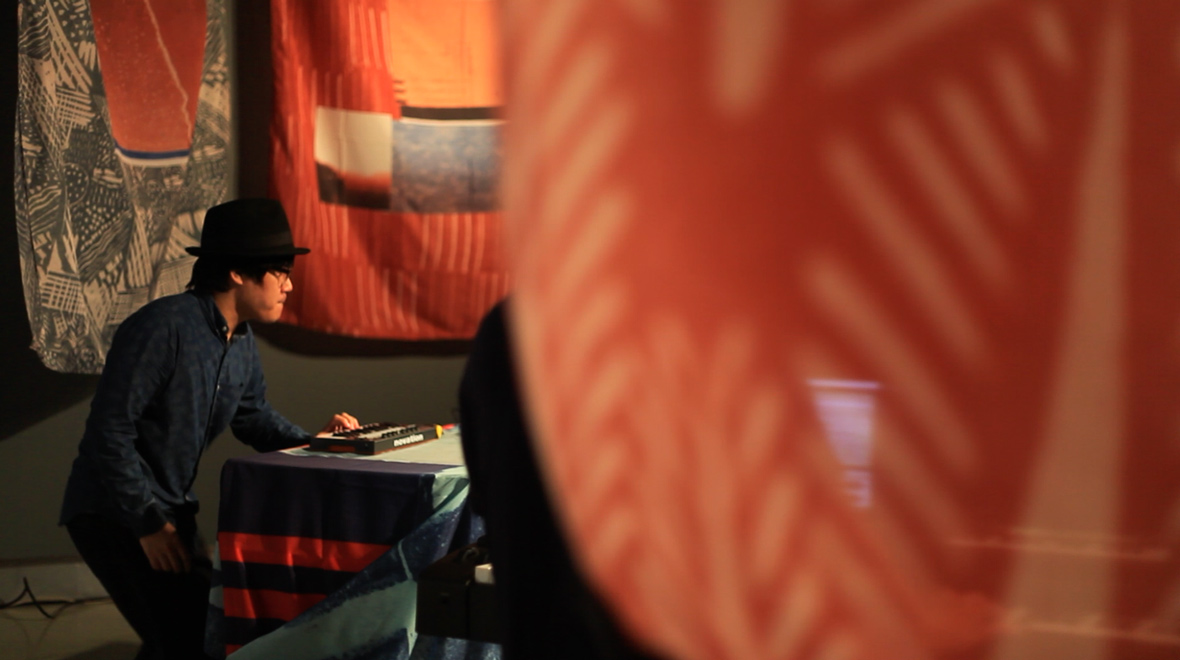 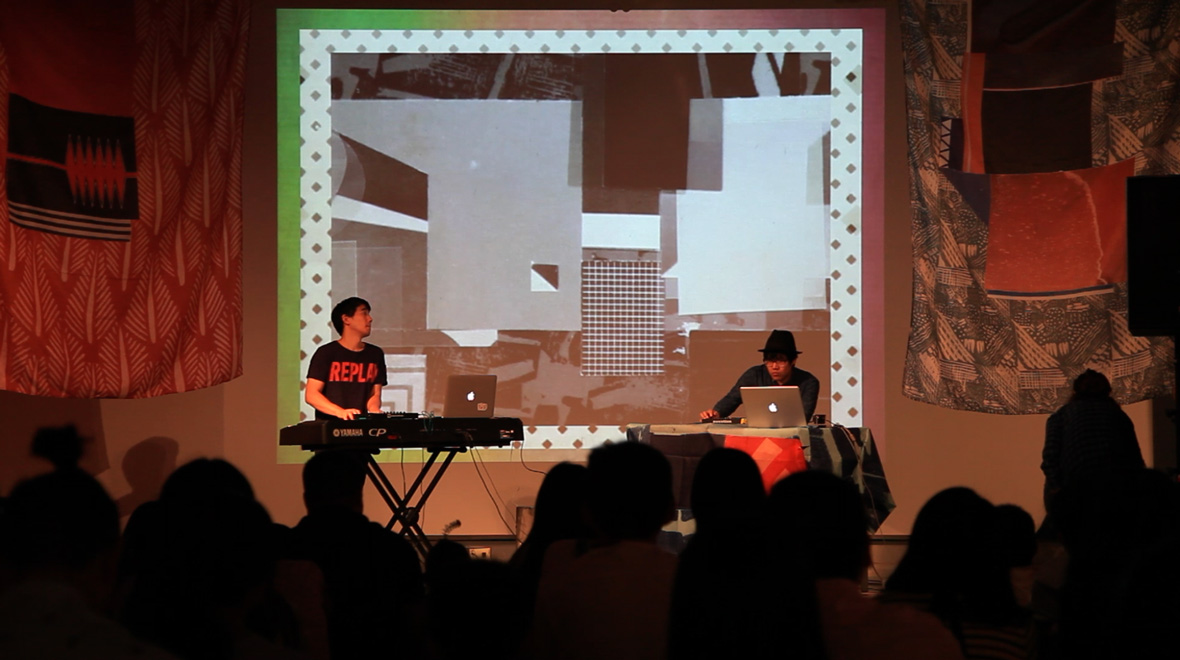